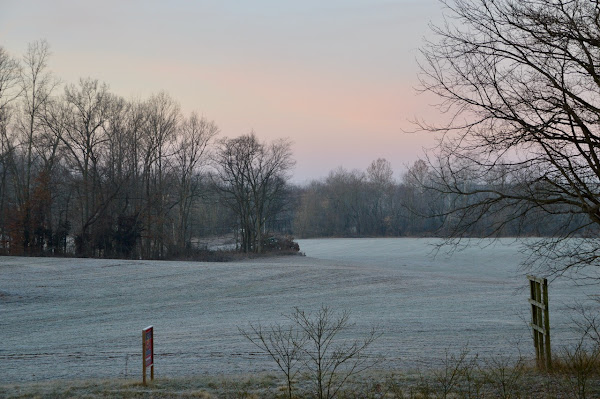 Stella walked in the computer room to start her hydration process that takes place every morning at 8am sharp. It is a sign that her daily morning walk is on as scheduled with with a "feels like" temperature of 19° today. At least it wasn't overcast skies this morning and actually, I was just as anxious as she was to take our morning walk. I gave her a surprise at the last part of her walk. 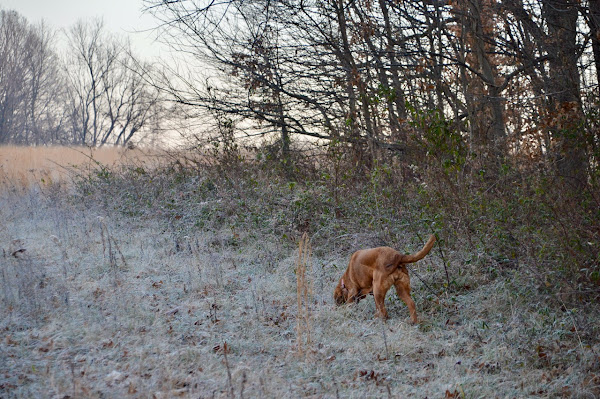 I can tell 54 minutes after the official start of the day, this is going to be a day of puzzles. A day of questions needing answered and phone calls to those that know more than I. Hopefully telling me "what the hell is going on???????????" Yes, it seems like it's "one of those days" and we haven't even had breakfast yet. 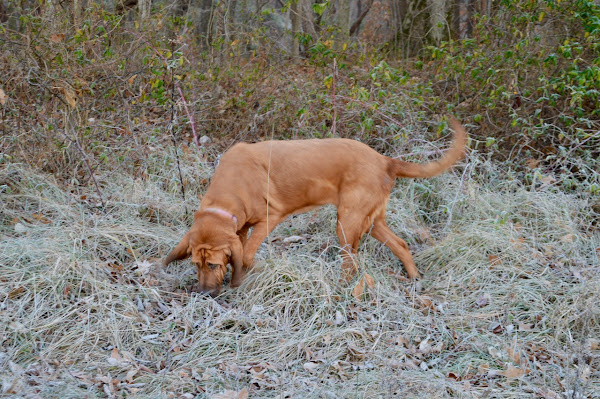 It started last night when the shower was producing nothing but cold water. There wasn't even a hint of warm water, let alone hot. It reminded me what happened a few days ago when the hot water was scalding hot, much higher than the normal setting. A day later back to normal. The breaker was still on when I checked it, last night outside in the carport. I'm thinking the water heater thermostat is bad ... but I am not a HVAC professional.

As you can see Stella was giving extra effort on every deer entry into or out of the woods to her right. Again, the heavy frosted field showed many signs of heavy deer traffic. I was beginning to wonder if I was gong to get enough photo opportunities during the walk today. We had just made our first turn and I had taken less photos than I normally do by that time in the walk. 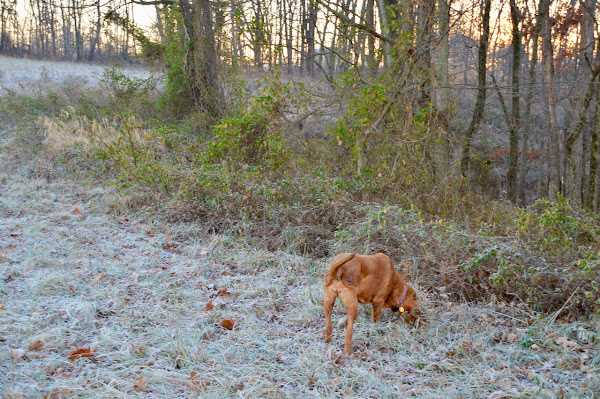 Another puzzle that is really weird today .. my internet speed. Remember I talked about it yesterday and for the first time ever in my satellite internet service history I was told a reason that it was bad weather where my service 'gateway' was. That happens to be in Utah while I reside Indiana.

My download speeds are less than 5Mbps this morning ... yet today unlike yesterday, I uploaded all of these photos in record time and my websites are loading as if my download speeds were in the 40'sMbps. That .... confuses me.

I added Salt Lake City, UT to my list of towns on Intellicast weather radar. With the reason the HughesNet Gen 5 techie gave me yesterday for slow speeds, I thought it would be good to check weather out there when I have internet problems. I was wondering this morning when I checked their weather ... why? That has never been a factor before. It's always been the weather I am experiencing here in 'the tropics' of Southern Indiana. 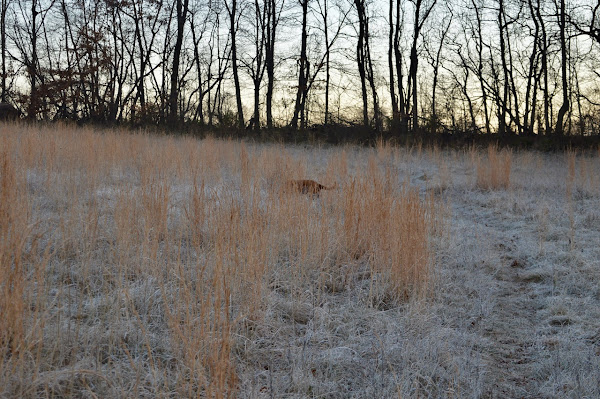 So that phone call is lined up on my list today ... possibly #1 above the call to the HVAC professional. He knows this house very well and was a prospective buyer right up until I decided to buy it in 1998. We all know that the internet is much more important than taking a hot shower, washing dishes in hot water, or even a pair of hands.  :) 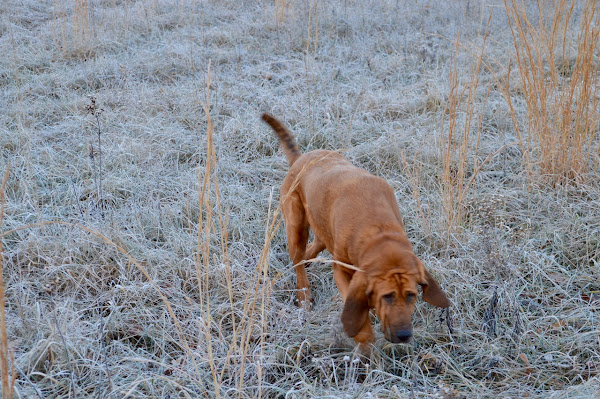 Speaking of weather, I just noticed something this morning as I was looking at the 10-day forecast. It looks like I will make it all the way through the month of December with no snow? No Snow???? Not that I remember, but there was a day that readers told me they would call it a "dusting", so I did have snow I guess ... but no more than a morning of it ... it was gone by noon.

That leads me to my memory issues and what I am now doing as of this morning. I decided last night to start listing what I wanted to blog about in the Apple Notes program. For years I have used Apple's "Notes" program to list all kinds of things. It is like my 2nd memory bank and will synchronize between my two computers, phone and tablet. It has jiggled my brains cells more than once, while using it at home or standing in the aisle at Lowe's. 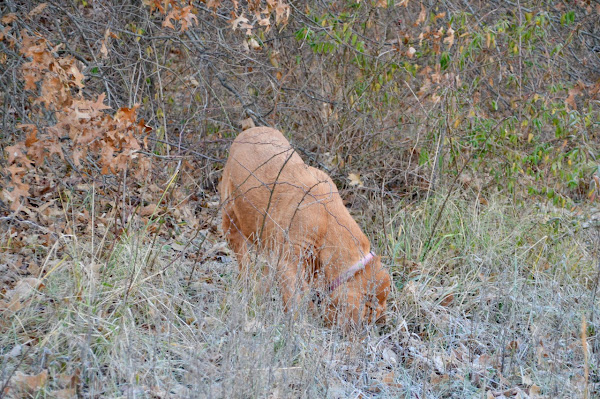 So last night I thought, why not use 'Notes' to list the topics I want to blog about the next time. I can call it "Blog Thoughts" and I'll enter ideas I have, either verbally or by typing a bullet list of just a few words. So this morning I see there are four things I wanted to blog about today. Of course looking at that list, there was NOT one thing I had forgotten. 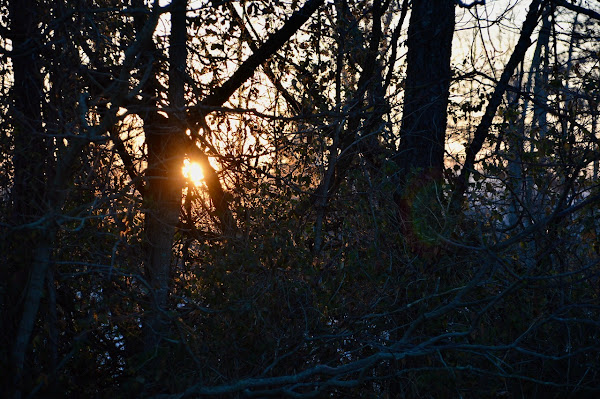 It's hard to get a sunrise photo shooting directly into the sunshine. This was about the best I could do, with the trees giving me just enough filter. Can you tell it's in the mid-20°'s? 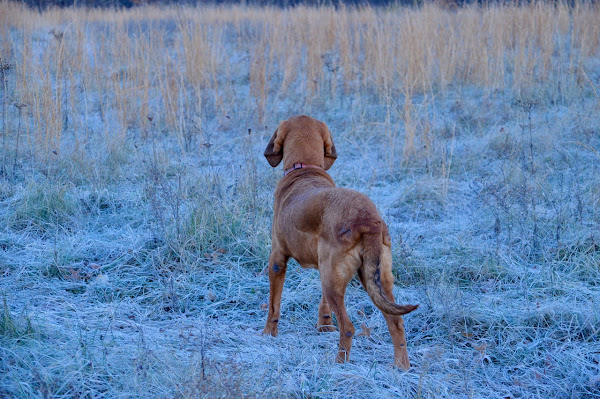 Stella facing the woods to the north. With a bloodhound nose it is most likely she smells deer out of sight. With the ears of a canine, she could be hearing something we cannot ... 4x more powerful than a human ear. In the 'old days' of just a couple of years ago, she and Sadie may have been sprinting full speed in that direction ...now she will only stand and stare. 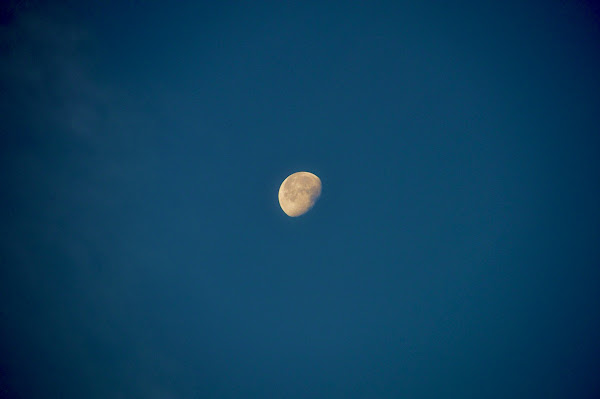 I tried taking a photo of the moon in the eastern horizon last night as it was coming up through the trees, in the woods behind my house. I tried both my Nikon and my iPhone cameras but neither photo turned out good enough to post. This morning was a different story as the moon was bright and clear. 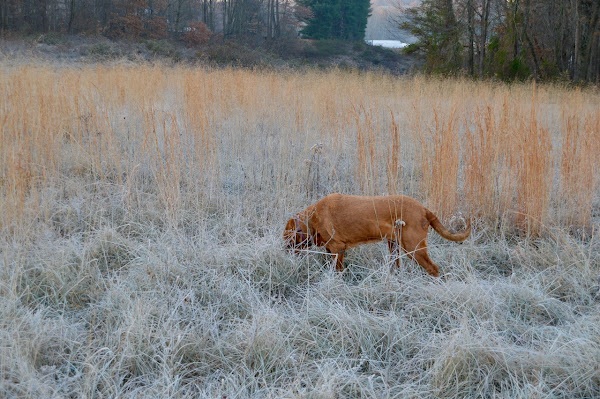 Here is an area just left of our path that has the more deer hoof prints than anywhere else in the field. I wasn't sure Stella was ever going to leave that area as I kept on walking. 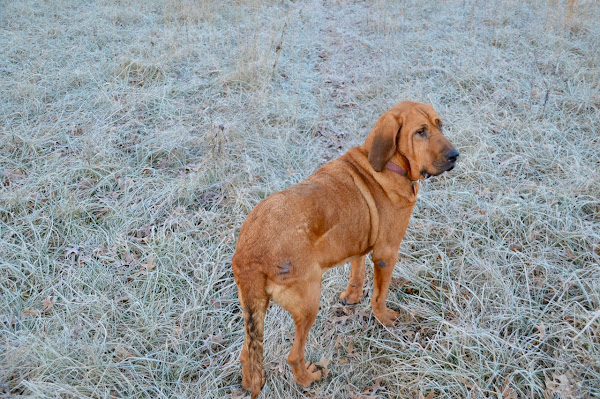 Yesterday afternoon it was the sound of gunshots. No doubt a new Christmas present. That is the thing about living in the country of 'the tropics', target practice is common at all times of day or night. I always hope their guns are not pointed in our direction.

She didn't stand there long yesterday and she will never be a hunter's assistant, that is used to  flush out deer or track them after they are shot. That is the purpose of a bloodhound. No, yesterday she stood like that no longer than a second or two, laid her ears back as a sign of fear and took off running for the house. Yep, she is gun shy. 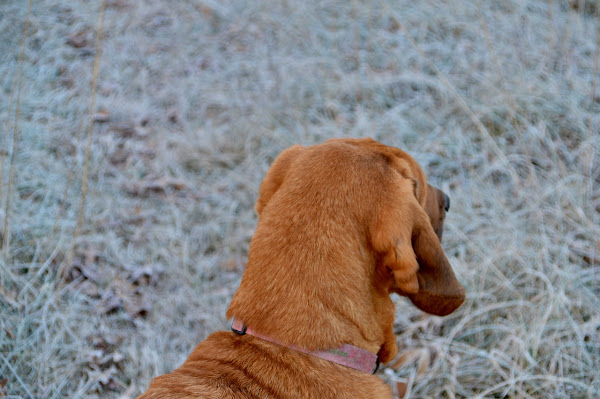 This morning there were no gun shots, just a lot of noise or scent that she was more than curious about. 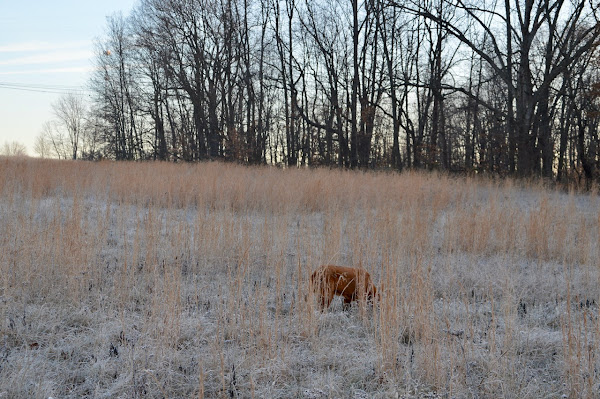 As I stepped into the backyard Stella was pretty far behind, walking on the path at her own pace. I thought "why not?", lets see what she does and it's not like I had to be anywhere. I had all the time in the world. These next photos of her in the field were shot at 35mm so I could show the yard. That would give you a better idea how far away she was from the yard, where I stood. I used 200mm when I wanted to see her up close.

It felt like a 'lifetime' as she wandered, tracking some kind of scent. I am guessing it's the scent of the mysterious field cat. After I downloaded the photos it showed she spent less than three minutes on her trip between the photo above and when she stepped into the yard. I never called her to come nor did I say anything. She was on her own time. 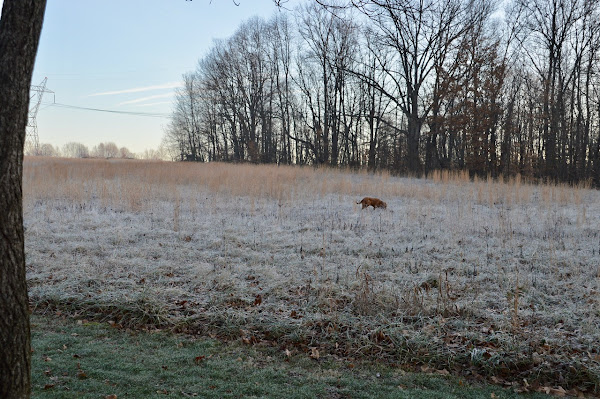 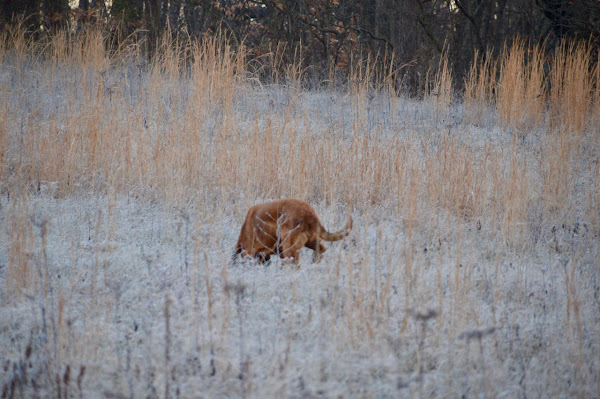 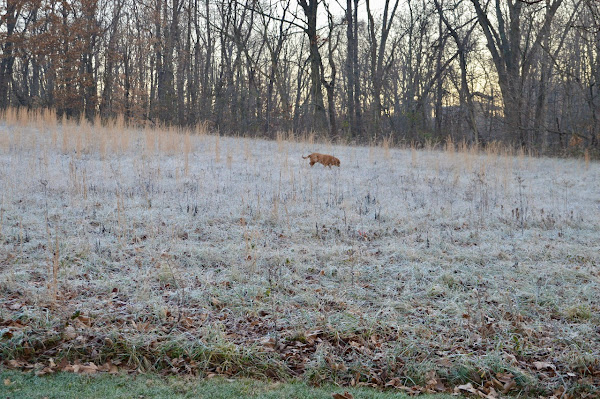 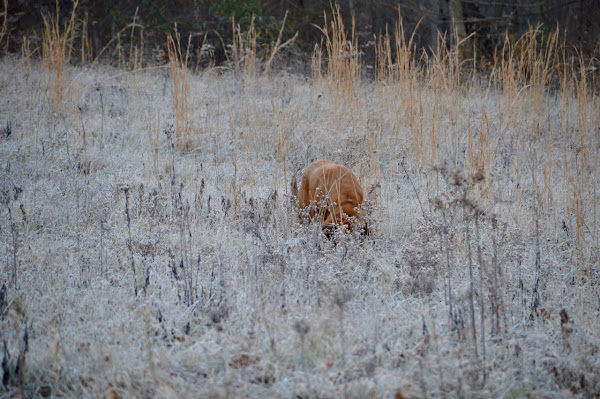 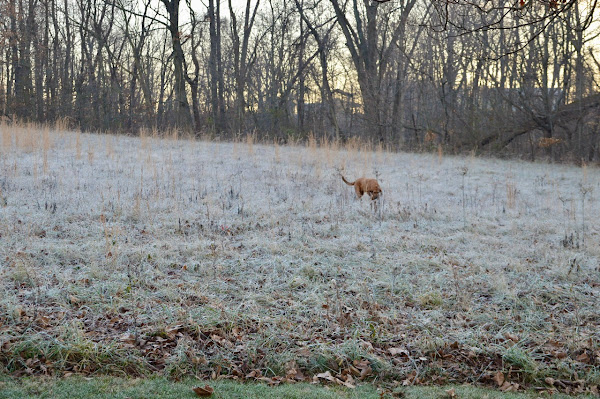 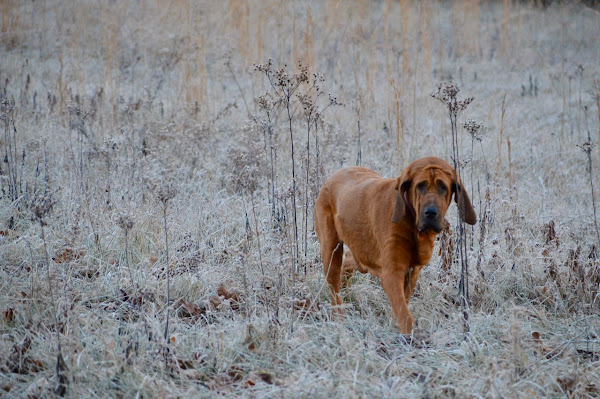 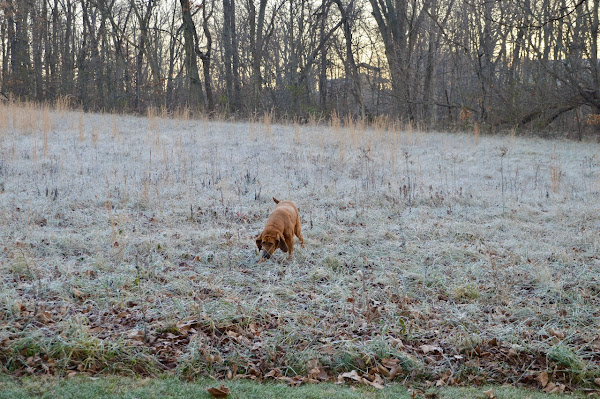 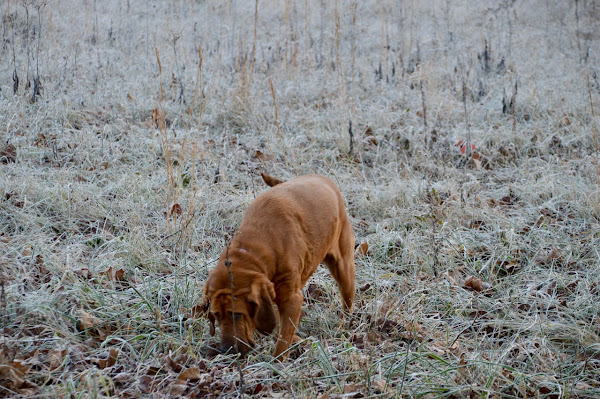 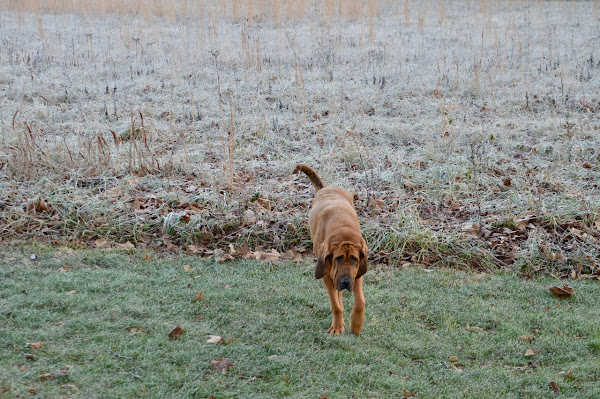 This entry point into the yard makes me believe it is the field cat and not deer. The deer walk just outside the property line by the north edge, toward the highway. 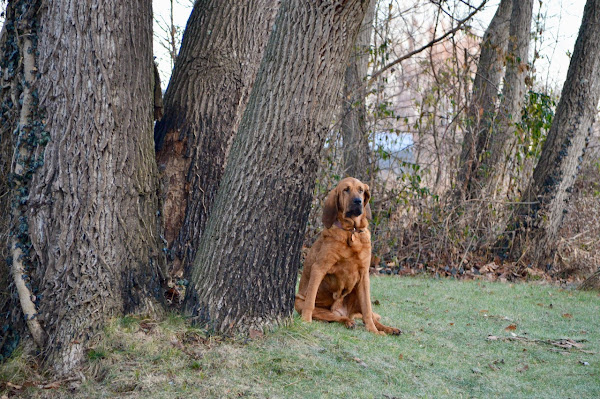 Even though I had given her a late Christmas gift this morning ... 'roaming on her own' ... she wanted to remind me that SHE will decide when we go inside. It felt like summer to her, not 19°. 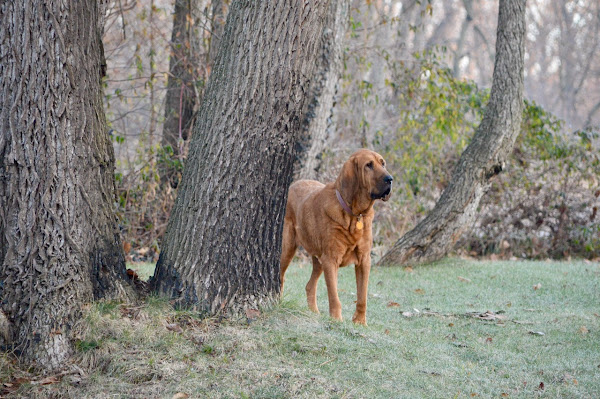 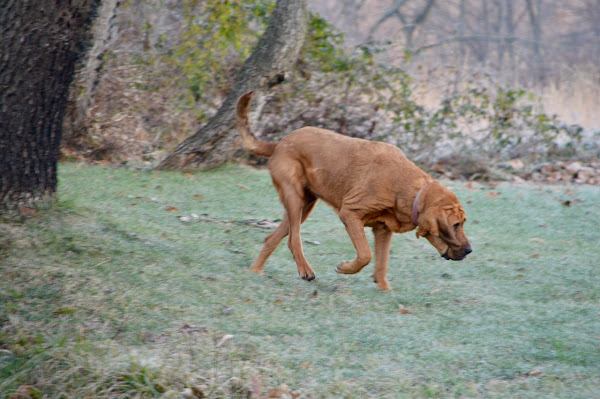 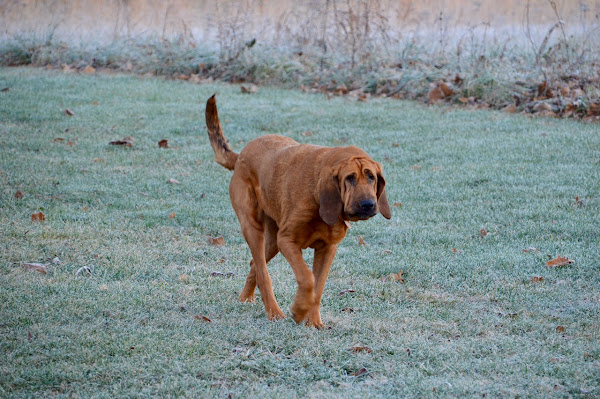 Some might be wondering if I survived my 'splurge' yesterday with all of that Chinese food ... the buffet is all you can eat for only $7.55. The food is always hot, as they never let partially filled pans sit too long. They are constantly back and forth from the kitchen to keep all the food as fresh and hot as possible. I did survive, with only one TUMS before going to bed.

I had no regrets as I looked at the list of foods I added to the MyFitnessPal app. On my computer I could see very easily which foods were the culprit of high sodium and high fat. The program awards me for the walks I take, whether they are at Stella's pace or my own. Yes, I do take solo walks sometimes, as fast as I can walk and more distance. It told me I had used most of those excess calories I ingested and I was close to a "break even" day at 1,500 calories.

Well in closing this morning ... my "Notes" program worked out well, for remembering what I wanted to blog about. I hope to have my two answers by noon today, solving the two puzzles. It might be possible to have that water heater fixed by noon. They are usually pretty responsive when I call, which is about every five years.

As we get near the end of 2018 I wondered yesterday if I could call our year a success? Can you really spend almost twice the amount of money on vet bills than dog food and be successful? I think you can. The hounds and I had a lot of great days this year. There was only routine maintenance on the small house we live in. There were no surprises financially or medically. So I would say 2018 was a pretty good year for the hounds and I.

Like everyone else, there are some very low times but that is part of life, whether you are a person or a hound dog.

The sun is out, it will get 30° warmer by this afternoon, so that tells me it's going to be another great day here in 'the tropics' of Southern Indiana.
at December 26, 2018