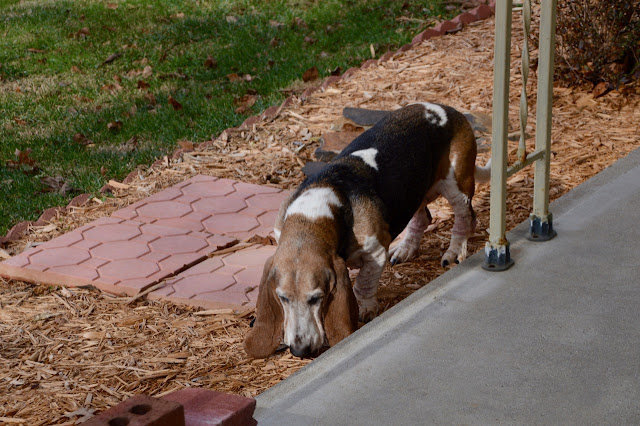 Just a couple of clarifications before I start. The title says "Temporary Anxiety" not "Temporary Insanity" and the old wrought iron posts are being replaced next spring or summer. I haven't made up my mind if I will reinstall wrought iron or wood posts. That project is in the Top 5 of my 2019 list. That's Heidi in one of her few outdoor activities lately. With the ground frozen hard as a rock this morning I don't expect much from her when she's outside. I have some good news on Stella's anxiety after Friday's results. 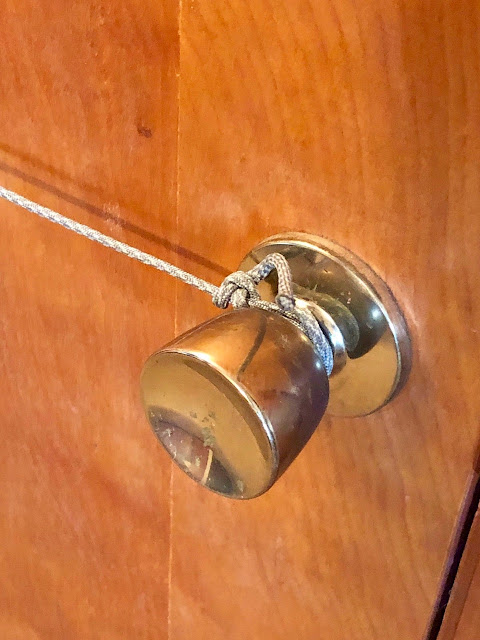 Because I am not sure if Stella's separation anxiety is temporary or if we are starting retraining for the next year or so I am trying a temporary first, non-destructive option. A couple of other reasons I have not attached a lock of some sort to the outside of the bedroom door to keep Stella inside is I don't like the idea of screwing a locking mechanism into the door and the wood door frame. It's a cosmetic thing with me I guess. Some would accuse me of being cheap and that might be legitimate. I hate wasting a dollar or two on something I might not end up using ... but strangely enough I never hesitate placing large amounts of money on a crap table. Go figure.

Stella had passed the test three different times yesterday and was back to normal. Temporary anxiety?? 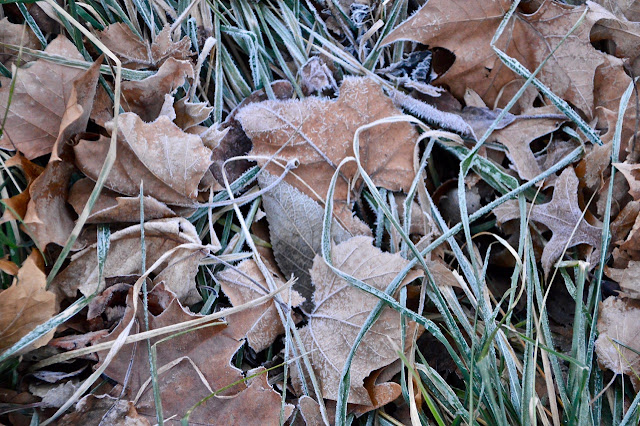 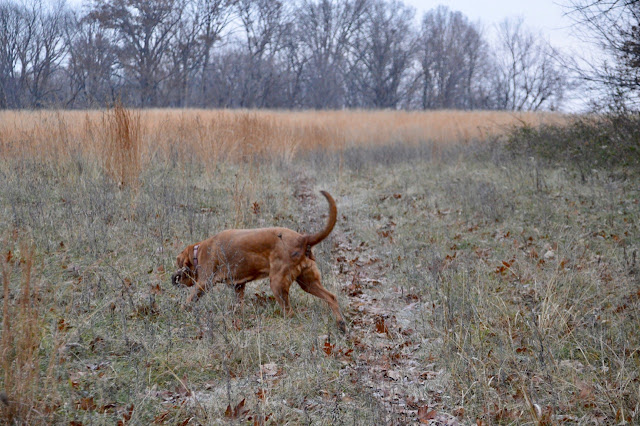 I was out of practice taking pictures while wearing ski gloves. Many of the photos this morning focused on everything but Stella because I was having a hard time pressing the shutter a second time halfway to focus in on the her. I also forgot to set the camera to 'single point' and it was too hard to adjust the settings with the thick bulky gloves on. 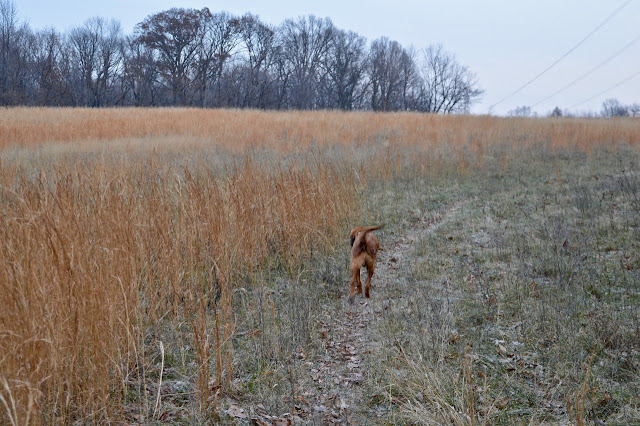 That's my excuse for bad photos today and I am sticking to it. 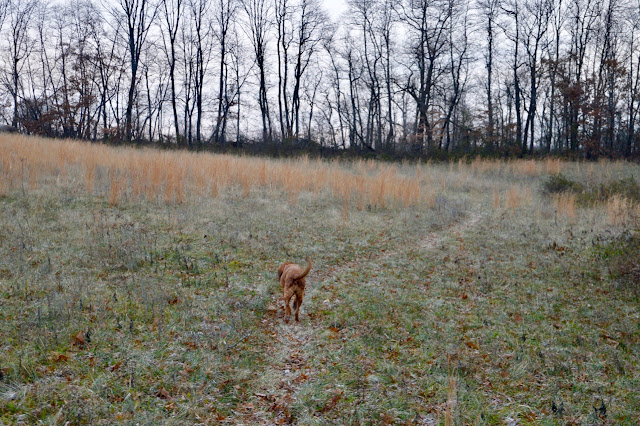 Two signs this morning that the Glycosomine supplements might be working, or is it the 1000mg of MSM, she was trotting away from me. When I caught up with her about where you see that path turning left, she stopped and crouching down on her front legs wanting to play. She would swing back and forth at me but never took off running.

Although, her walking feature today was to walk in front of me so slow I could barely walk and if I walked in front of her she would literally walk on my heels until I moved to the side to let her pass. Or she would trot by me and the walk as slow as possible. The funniest hound I have ever had I think. 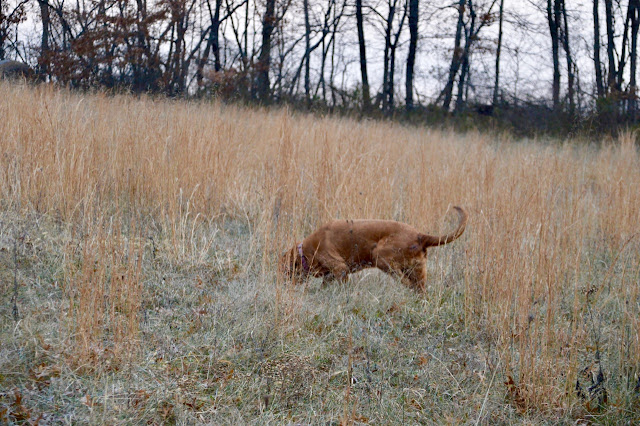 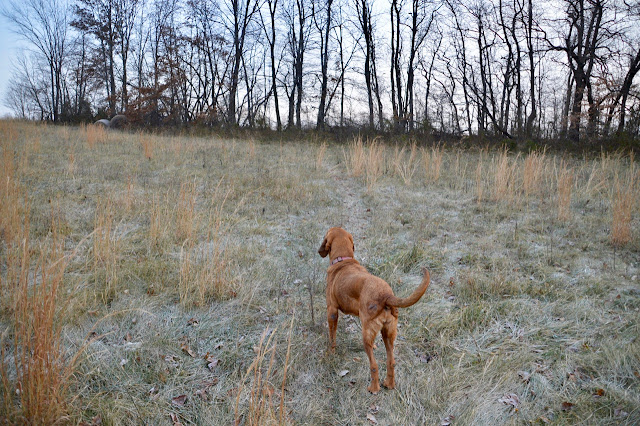 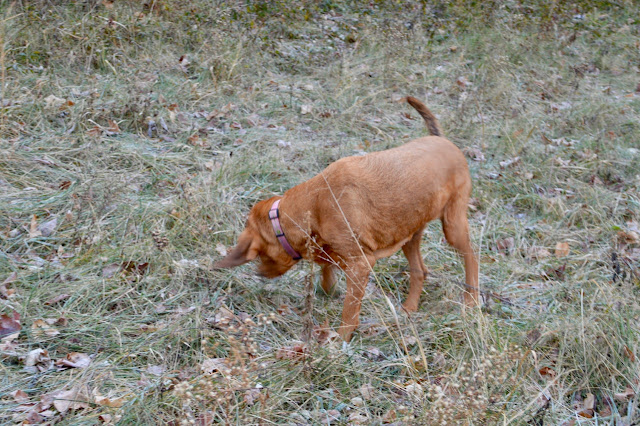 It was almost two years ago for some mysterious reason she lost so much weight, around 15 pounds, that she was skin and bones. She has gained all of that weight back plus a few more pounds to be where she should be for a smaller female bloodhound. I changed dog food at that time with hopes of clearing up Heidi's skin problems. The food fixed both hounds. 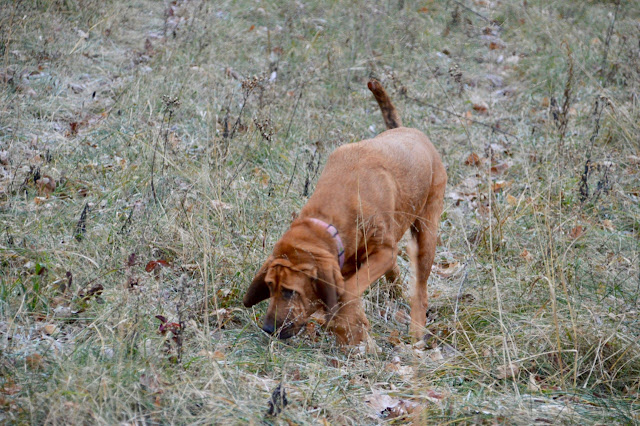 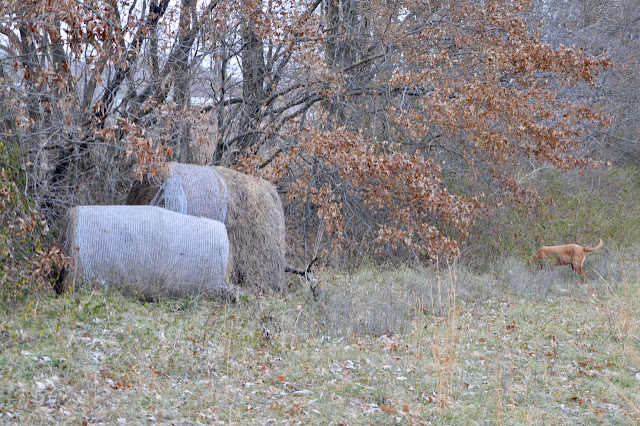 I let her do a little wandering today on her own time. I was trying to catch her possibly running toward me for some photos but that never happened. She eventually did catch up with me after I made the final turn toward home. 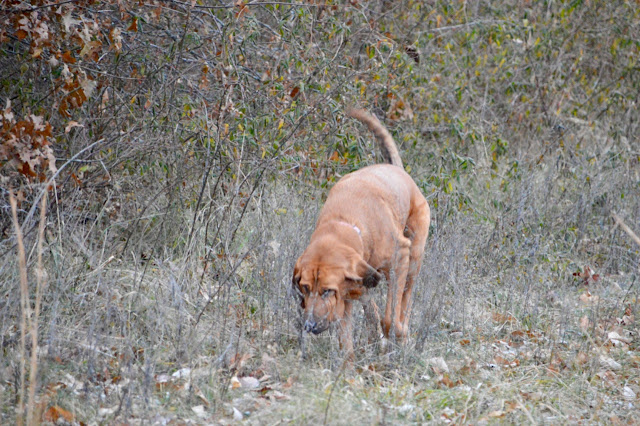 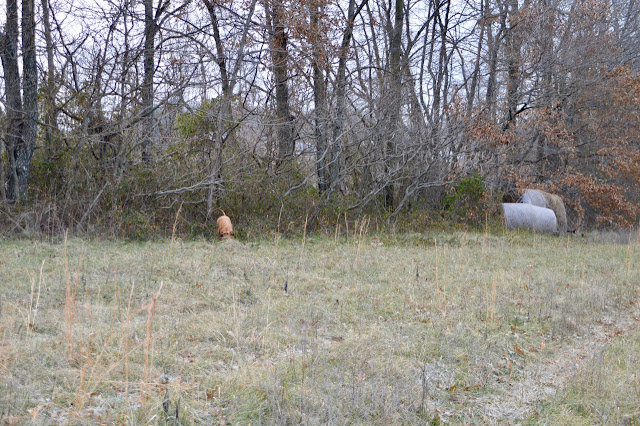 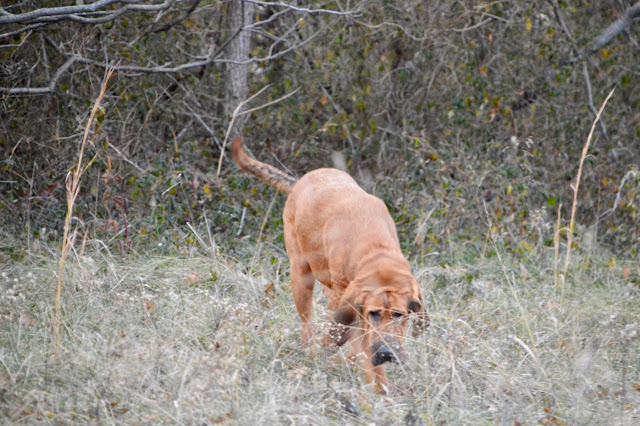 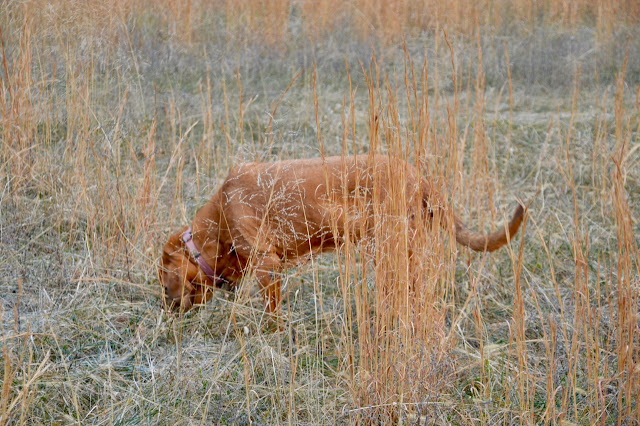 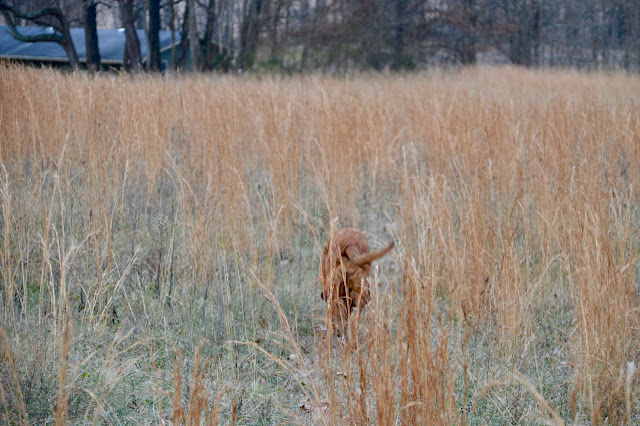 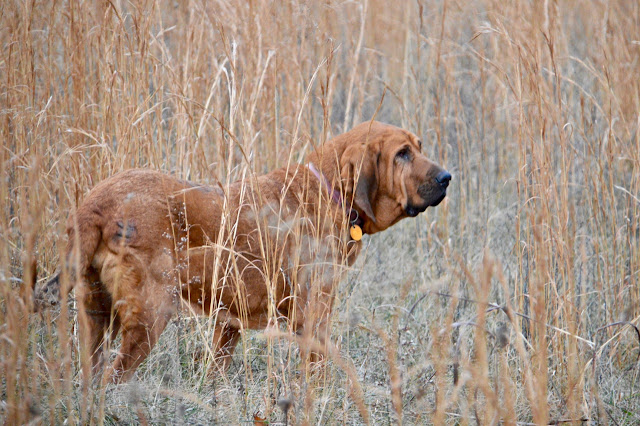 She always stops in this same place every walk and looks toward the small wooded area behind my neighbors house. I have not seen anything walk out of that woods in years. Then again, she might be smelling food the neighbors leave out for the stray cat. 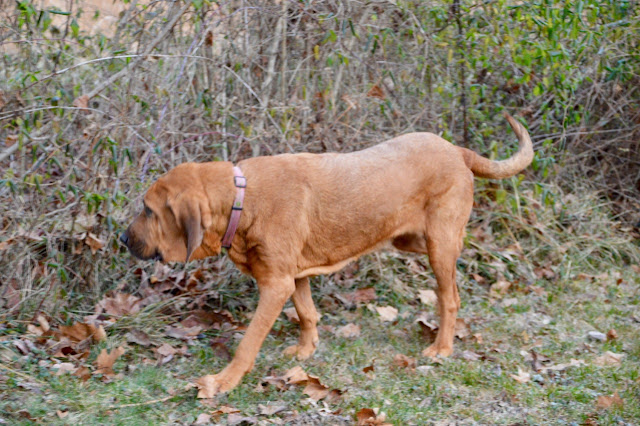 By this time in the walk my face is frozen. I could feel it almost sticking to the monitor on the back of the camera when I was looking through the view finder to take a photo. I try not to remember last summer, with hot temperatures. 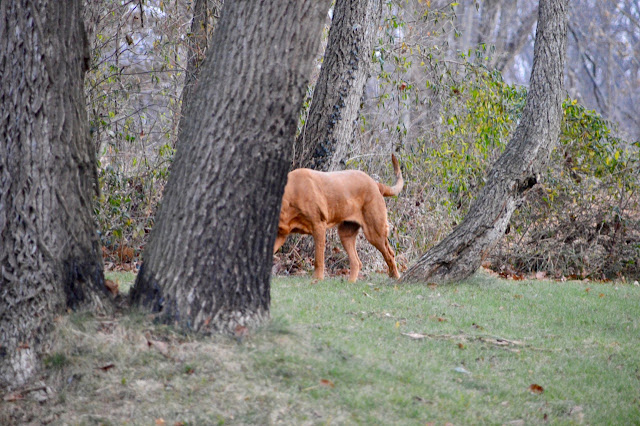 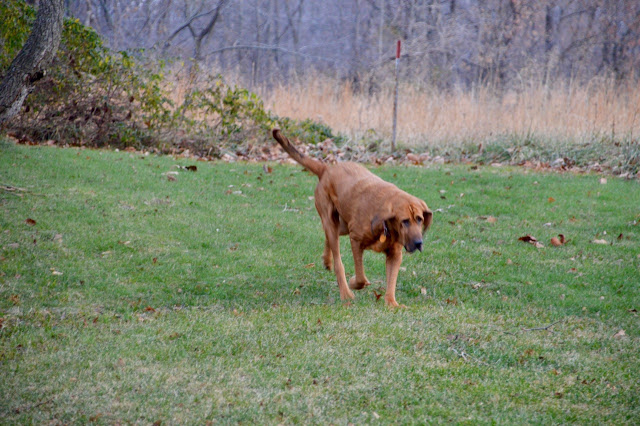 She has had enough for this morning. 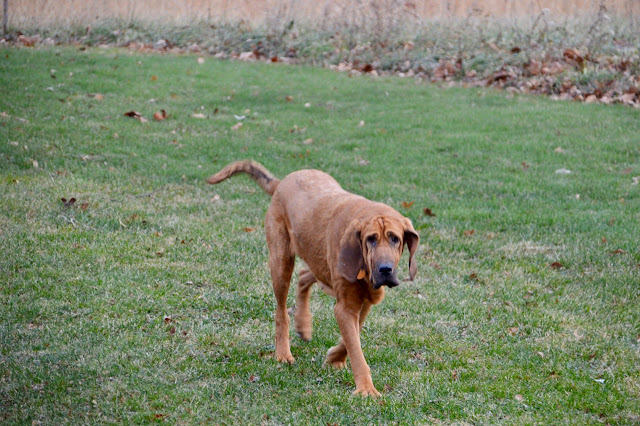 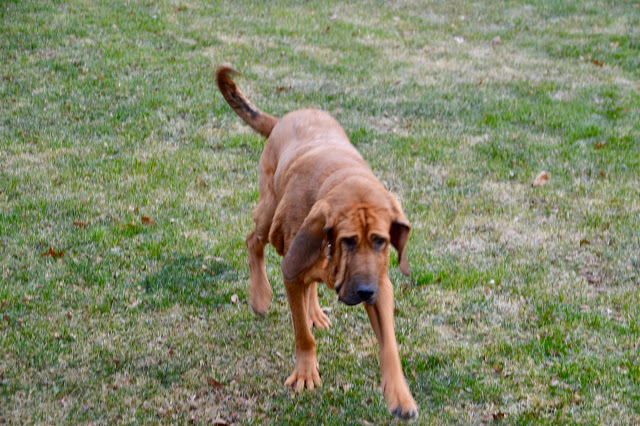 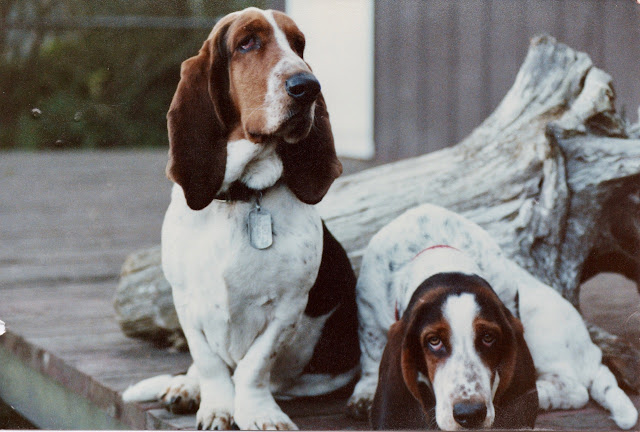 I wonder how many people will make it to the end of this post to see my first Sadie on the left, rescued from the shelter and Harry on the right who was the first basset hound I had bought as a eight week old puppy. We were living out on San Juan Dr, about a mile from the Ft. Ebey SP on Whidbey Island. Sadie was a 'runner' where a door opened only an inch gave her enough room to take off sprinting.

Harry's personality was a lot like Winston's, only he was a 'wanderer'. While living in a condo downtown Oak Harbor Wa, one time he climbed over my fence gate while I was at work. My neighbor who worked at the BMV called me to let me know that Harry was taking his afternoon nap inside the BMV after he walked through the open back door to the office. He also liked looking for any kind of food.

After we moved to where we live today, the landscaping business that is within view of my house, use to call me to let me know that Harry was down behind their counter taking an afternoon nap. He lived a little over 13 years and survived all his 'wandering'.

That's about it for today. I have an IU basketball game to watch at 2:30pm and after that it will be what we've been doing most days ... reading books, surfing the internet, a few games of Mahjong with a possible siesta.