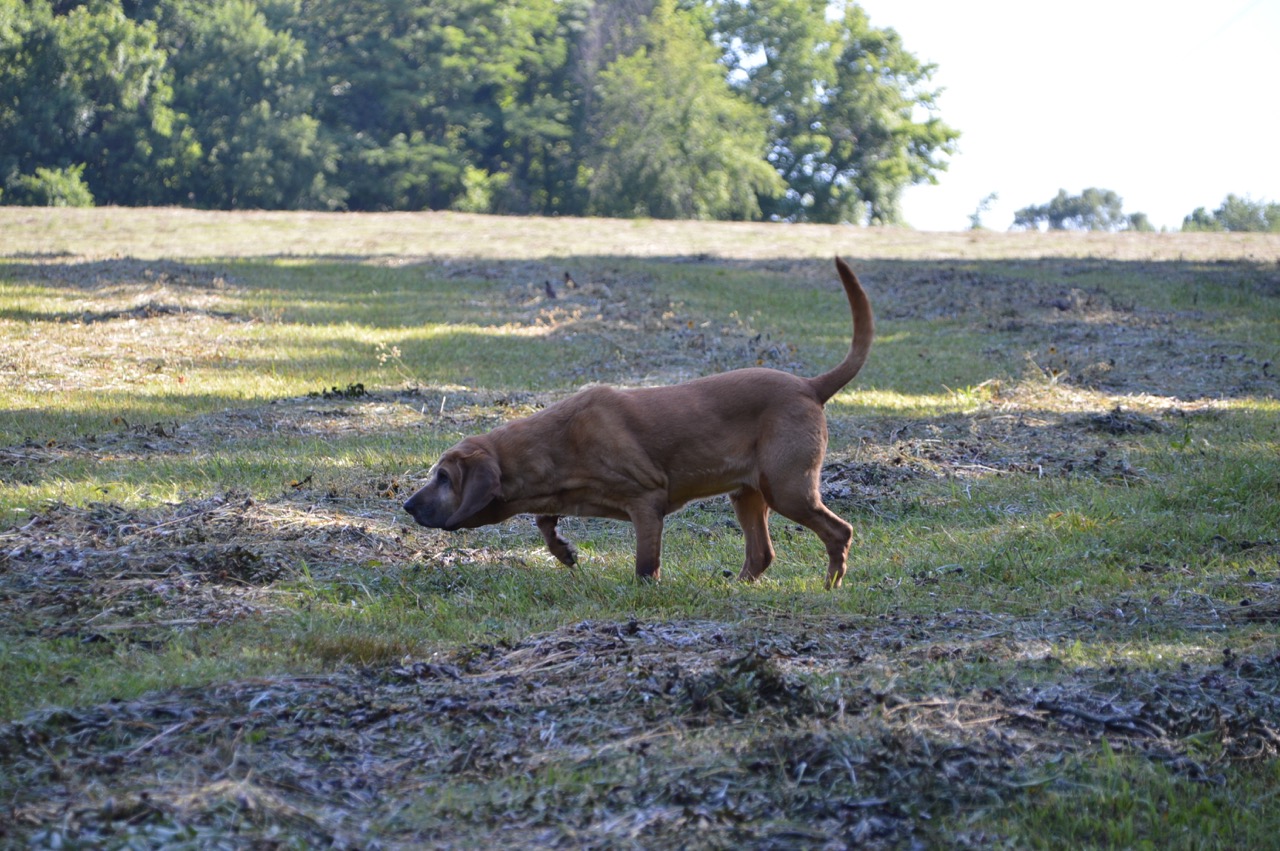 As with anything in life, changes present new challenges. It's nothing new and it happens every time the field is mowed. The challenge during the multiple daily hound walks changes from trying to see them in tall grass to now watching for and preventing them from eating what they find. 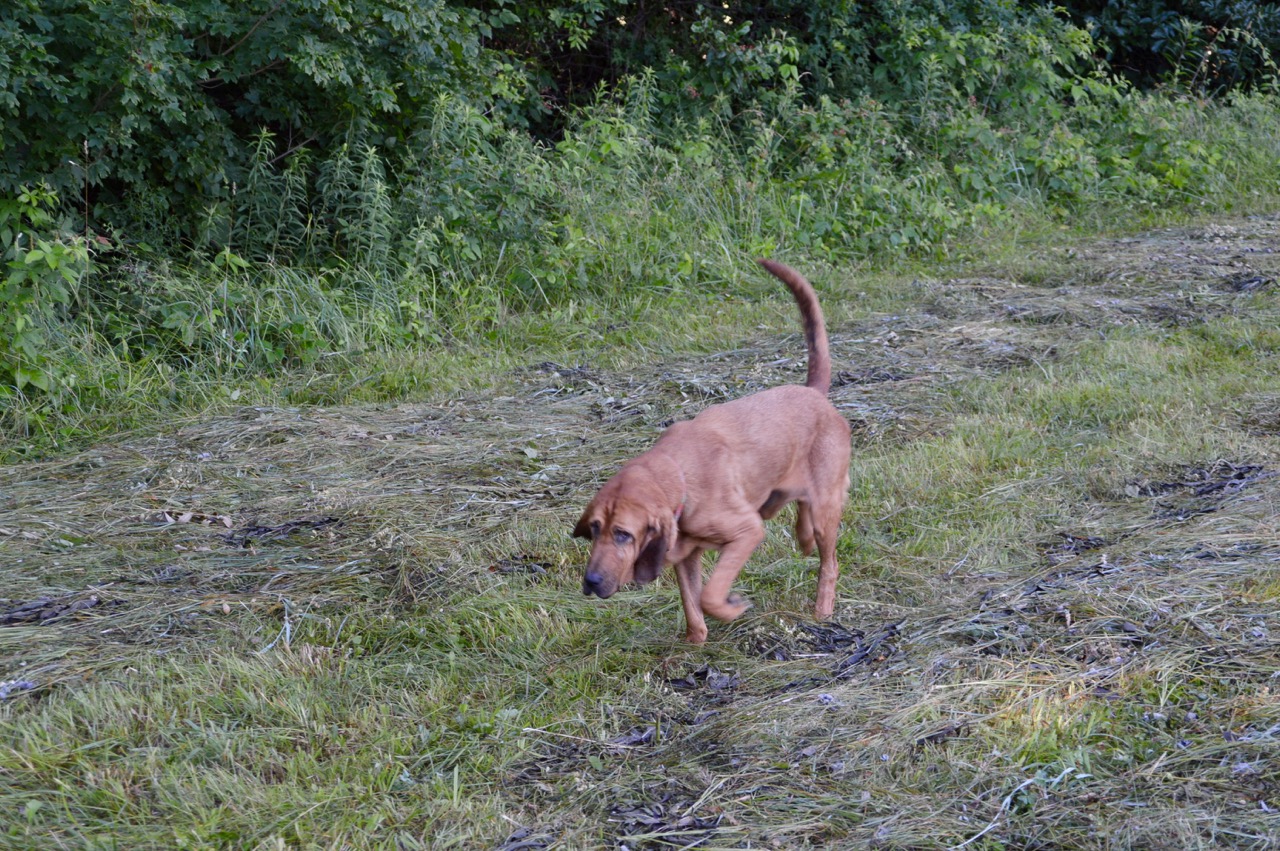 It's the point in time of dog ownership where we find out they really are just dogs and not what their owners wish them to be. They might seem just like children or grown people as they sleep on couches, eat people food, toss things at you to play and understand what you are saying.

They are all of those things but one act they do proves they are still dogs. They can eat the grosses stuff when they find it. After a fresh cut field that includes dead mice and an occasional dead bird that was caught under the mower. Deer scat is the furthest thing from their mind when there is other stuff to try to devour before I scream "NO". 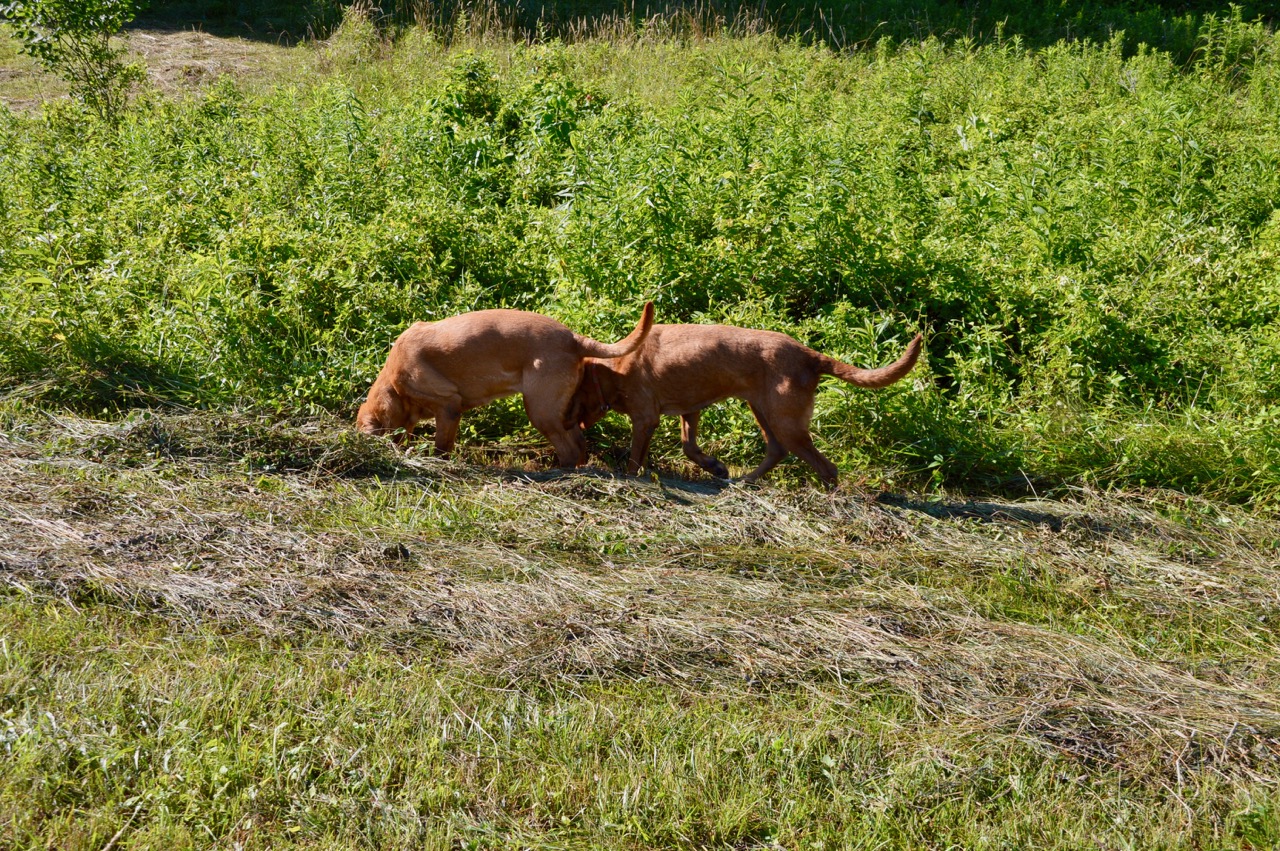 As Sadie and Stella walked mostly along the edge of the field after making that first turn, I could see a worn path right where Stella stopped, signifying deer traffic. You can kind of see the path right above her head that would lead into the gully. 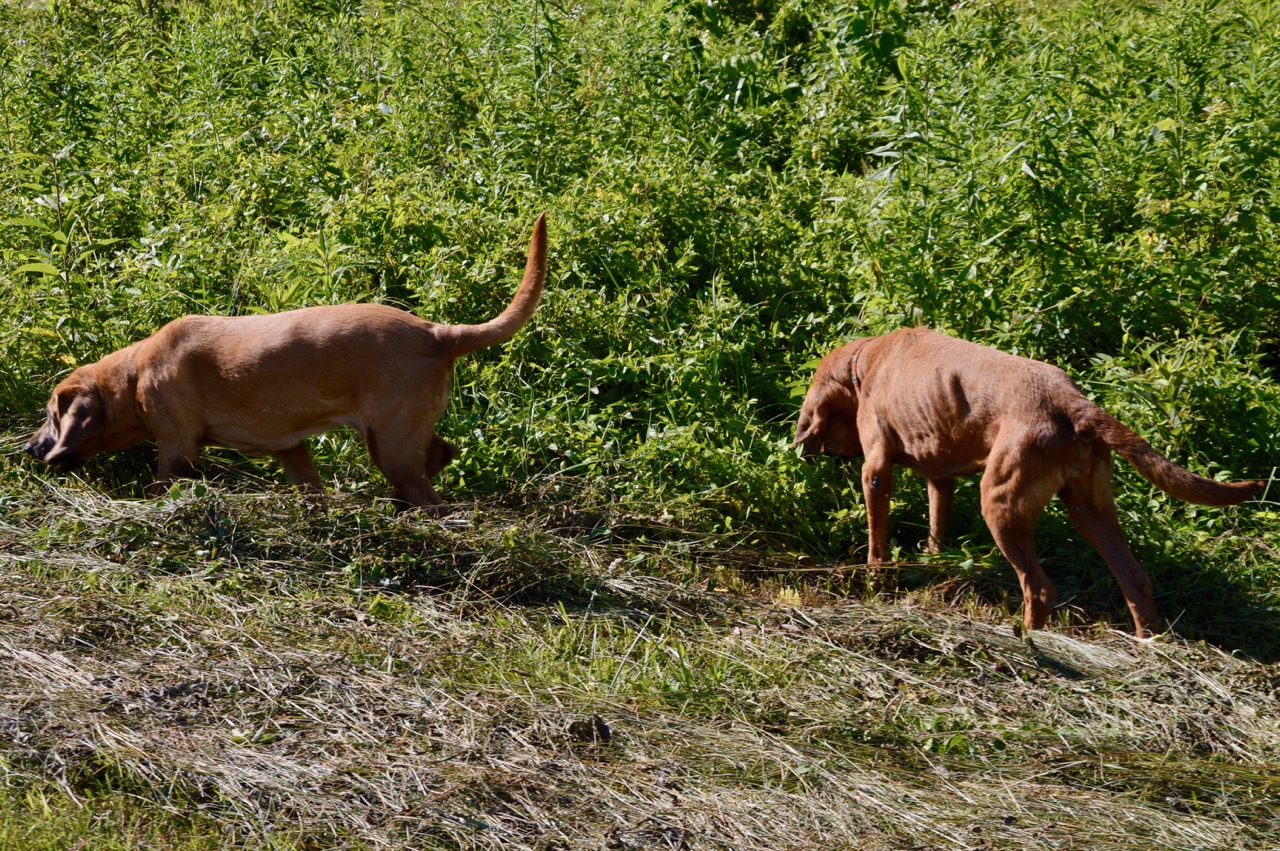 She was positive the deer had gone that way and was about to get deep into the brush and down in the gully until I told her to get out of there. I am happy to see she knows what that means when I say it. An example of when hounds act like people. 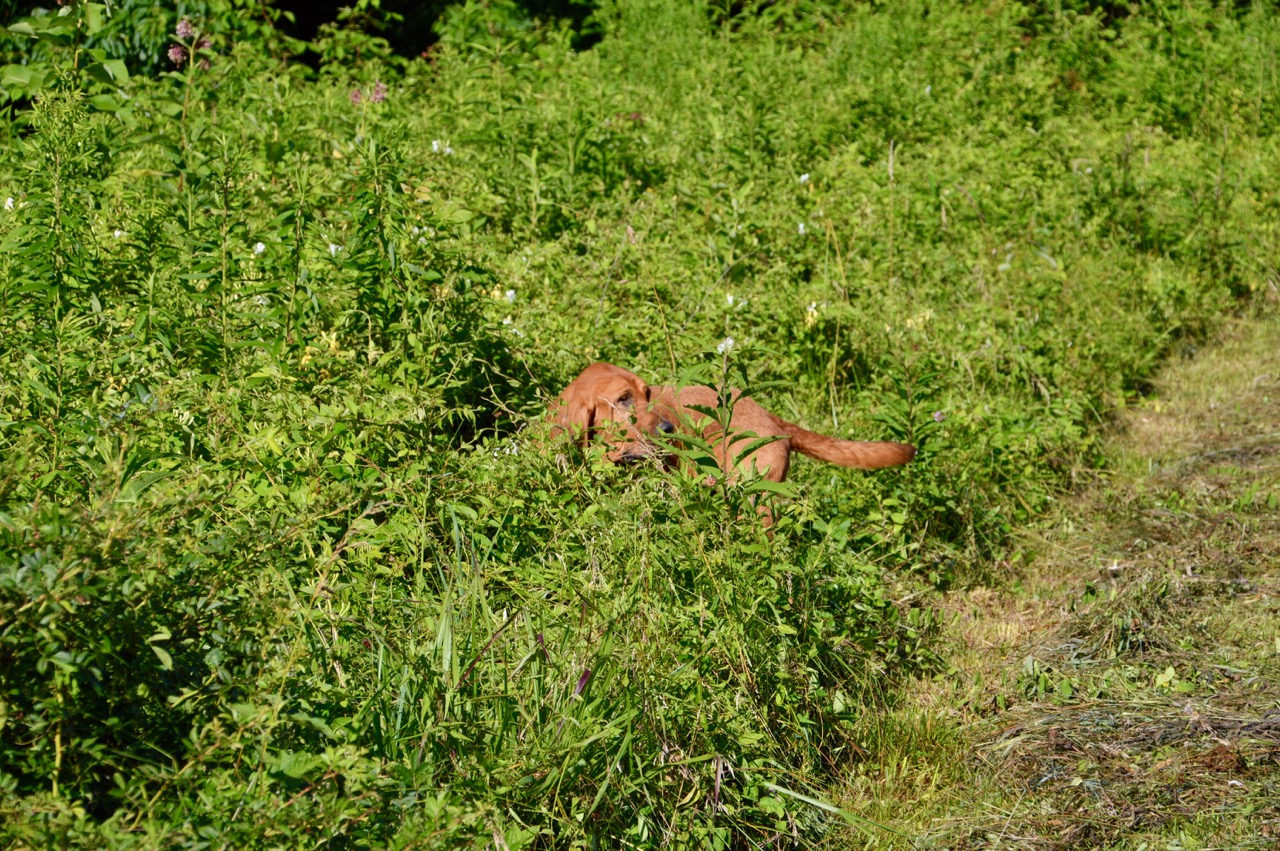 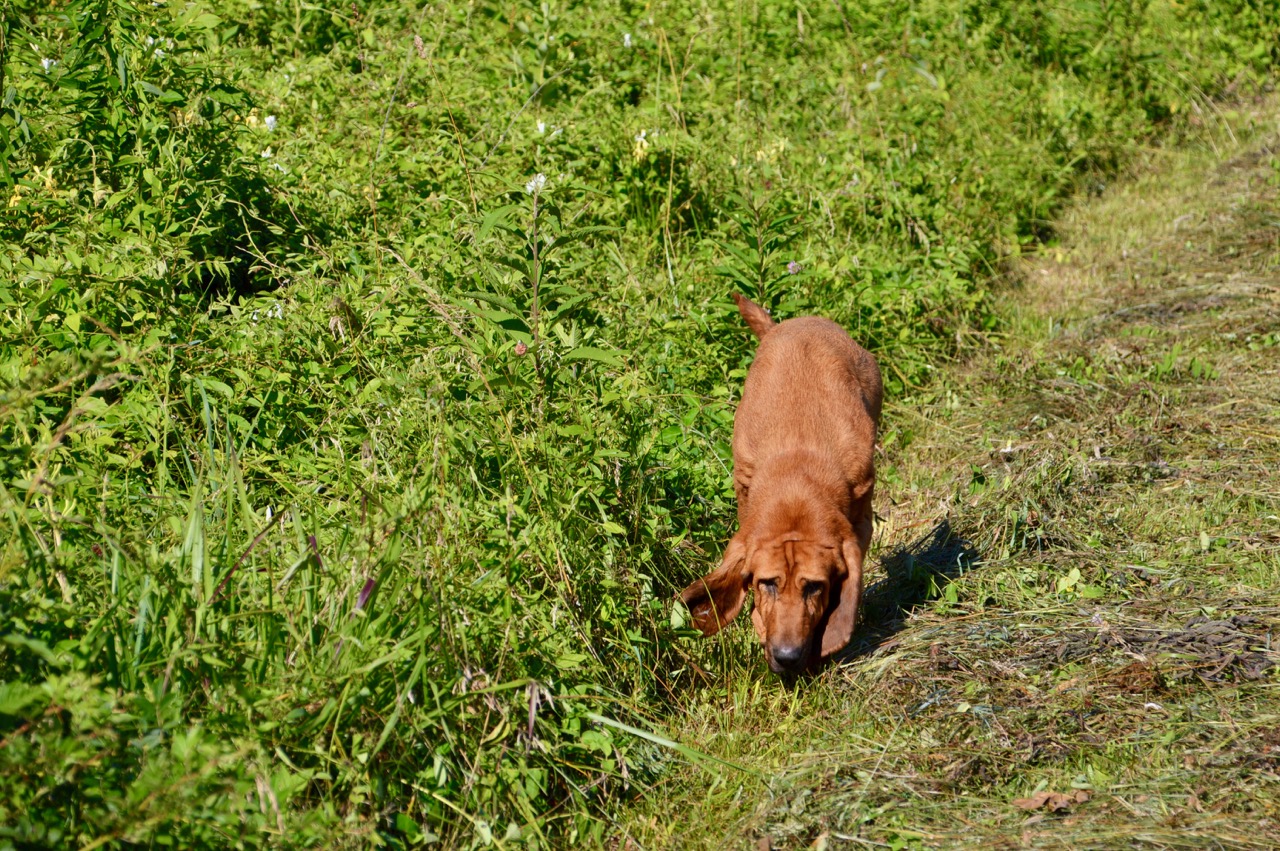 With the field cut it was still a little wet this morning in the shaded areas but nothing like it is with tall grass. Now we can venture up into the far right corner adding a little more time, more steps and a longer walk ... and without getting soaked from the tall grass in the shaded area. 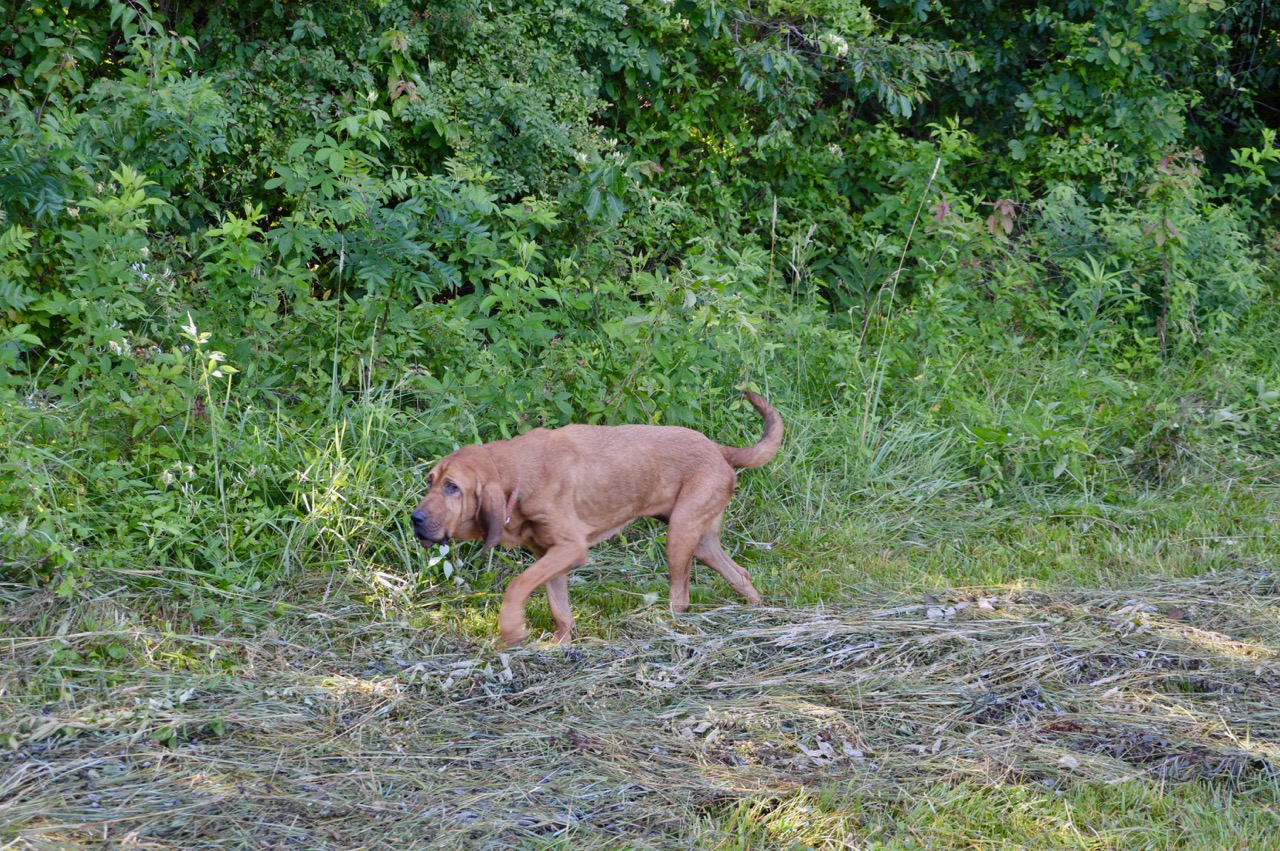 Here is Sadie about to act like a hound and not a person. It's a time where her nose is just too good. Luckily she dropped what she had found when I said "drop it". In the past about the time I would say "drop it", Winston would take one big gulp and it was gone. He never got sick but it made me sick seeing it happen. 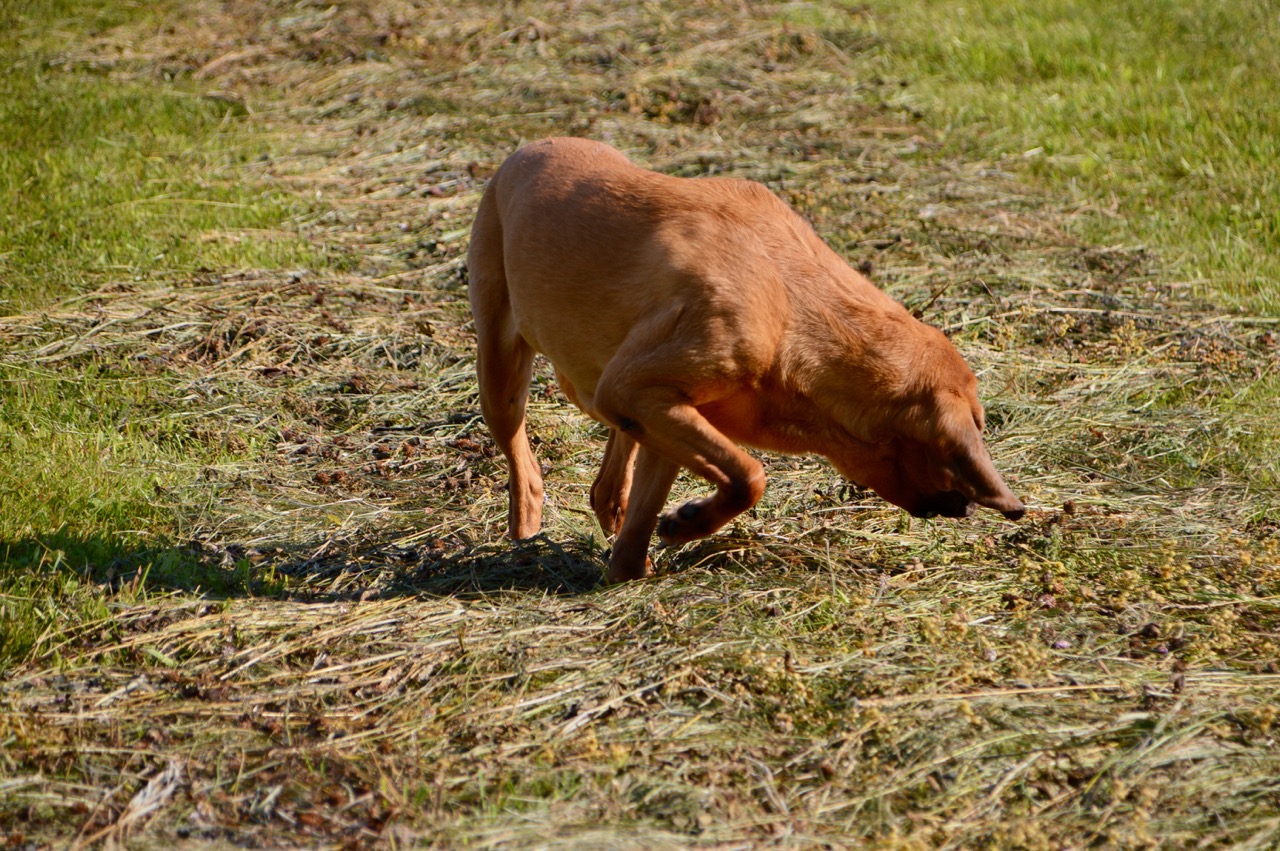 There were a few times this morning that Stella broke into a trot that was a faster pace than previous weeks. I get the feeling she likes having the field cut. 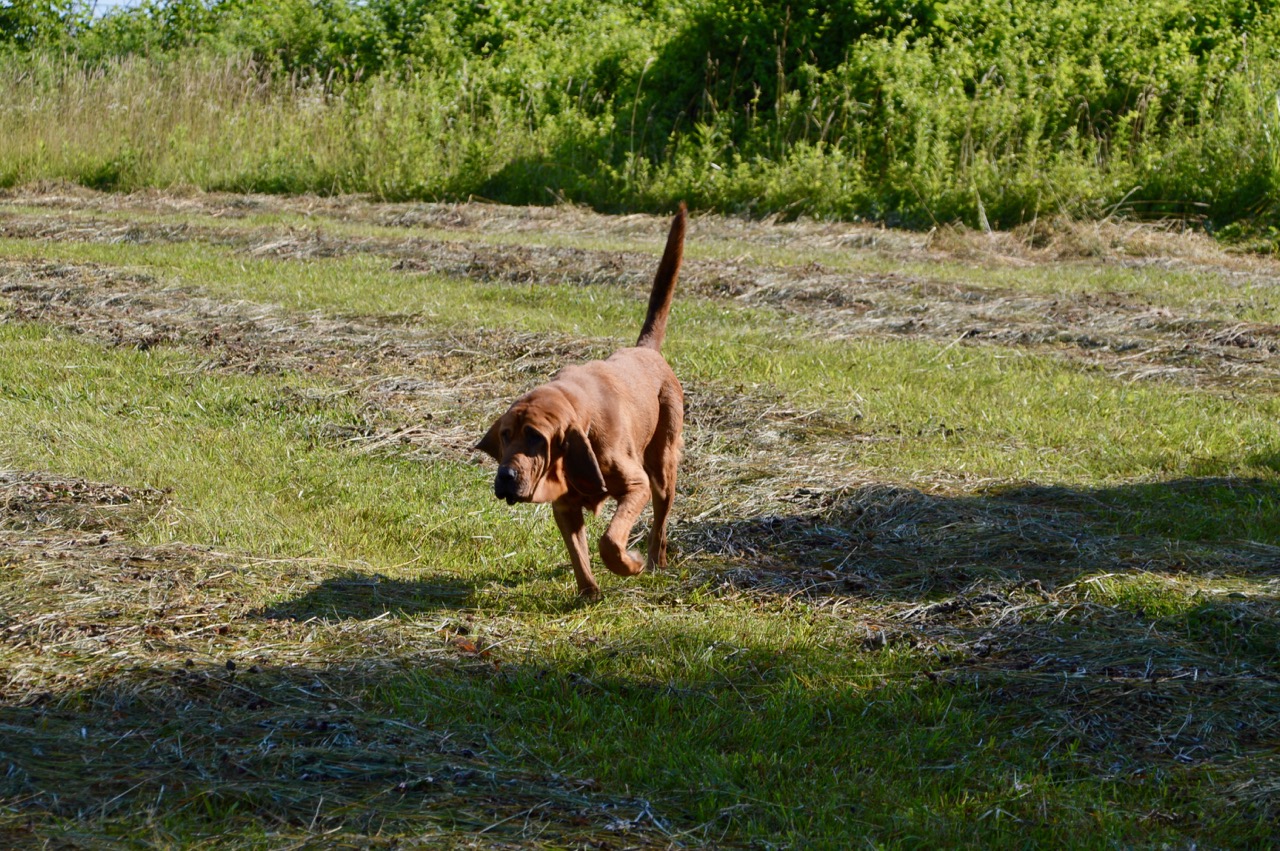 When the hounds are in the searching mode it's a constant battle to keep walking forward while turning to keep an eye on them. They never drop anything they find on their own, only when I tell them to. Luckily on this morning's walk, they did not eat anything they found and followed my commands of "no" or "drop it". 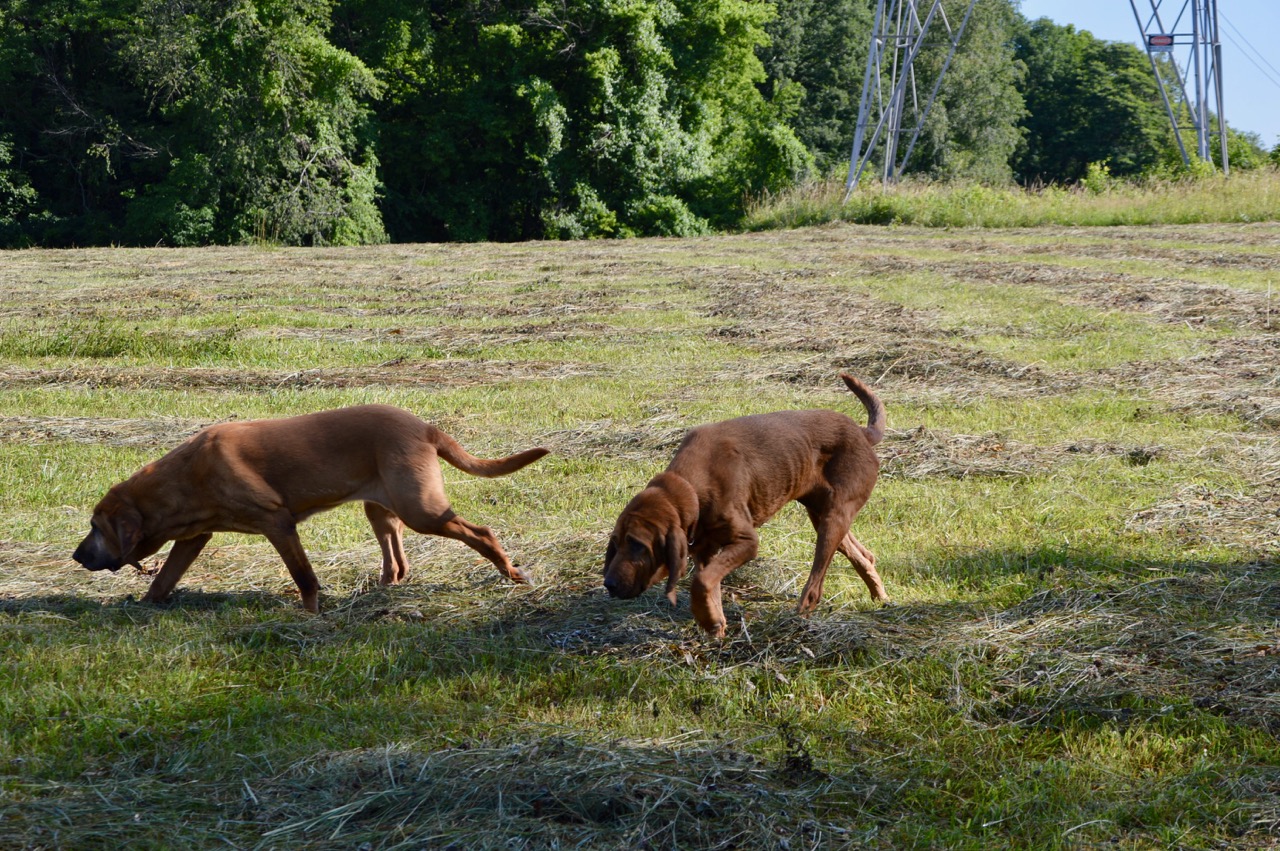 Sadie was walking very slow as I took this picture. You notice she was able to curl her paw as much as she could with each step. It was like she was walking in slow motion. 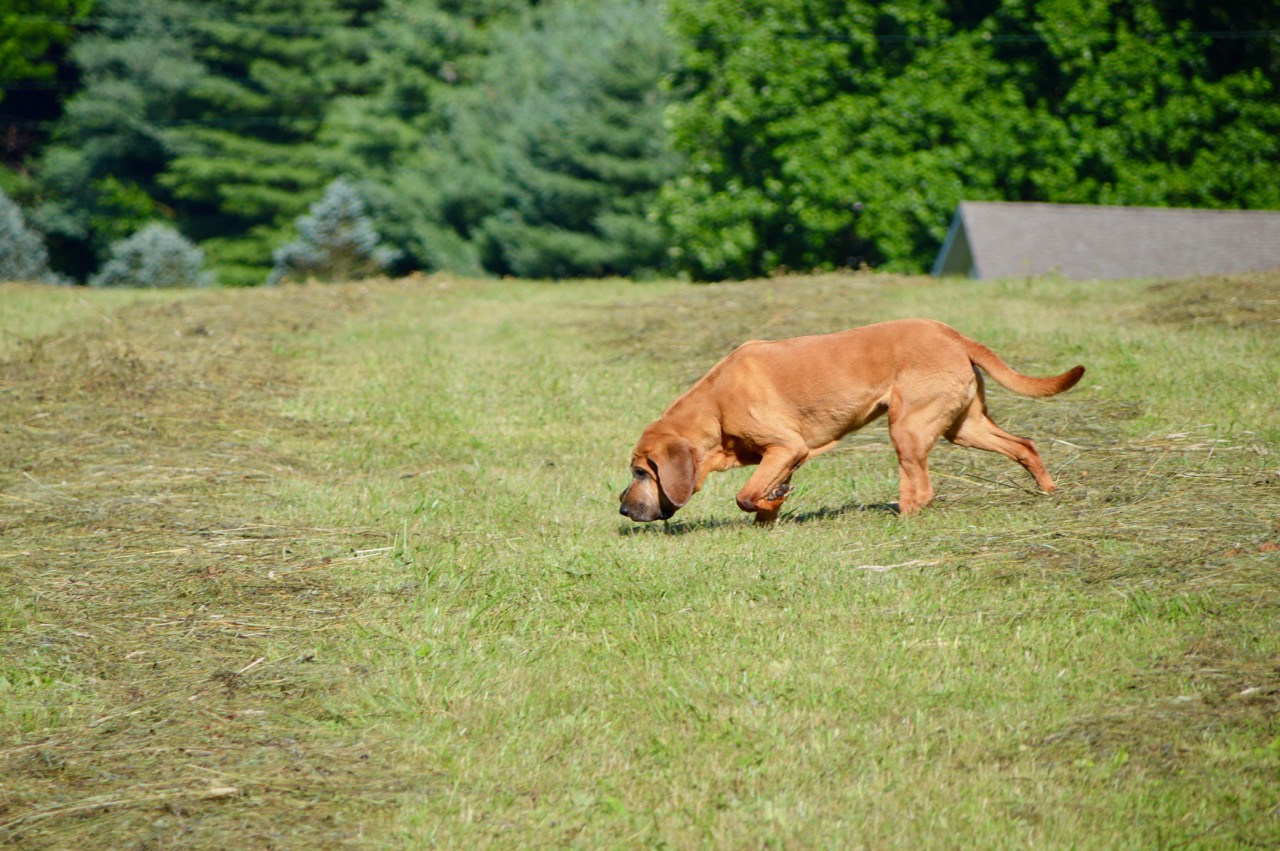 Looking at the rows of drying grass, flowers and weeds it does not look like they will get their normal 16-18 rolls of hay. The field needed to be cut but I could tell during our walks that much of the field was not real tall nor thick like it has been in the past.

Even with the sunshine out early this morning and covering most of the field, Stella did not like walking over the rows that were still wet. Once she stepped into the yard she trotted to the door. She needed water and a morning nap when she got inside. 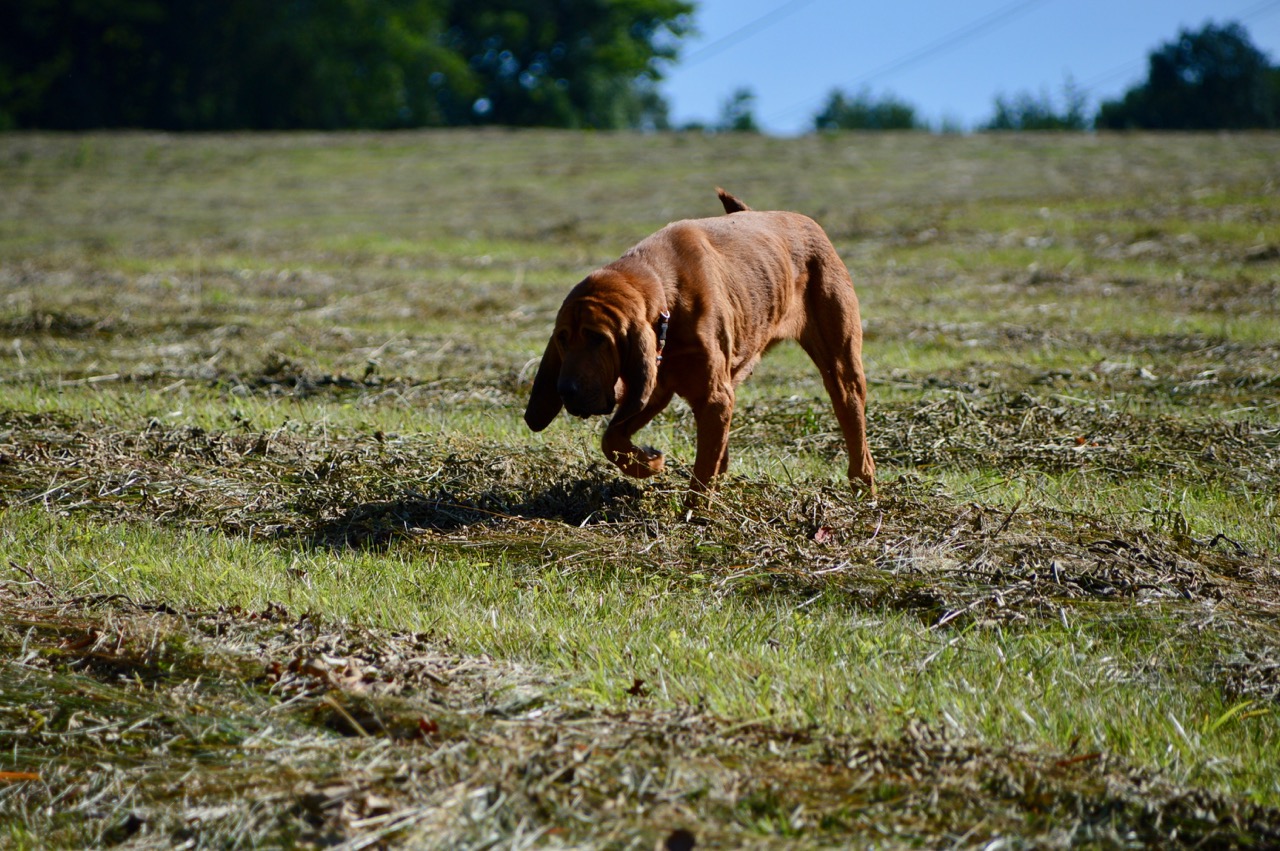 The afternoon turned out more productive than I had planned. One thing led to another and before I knew it 8pm was just around the corner. All three hounds made an appearance after their lunch. It didn't take long for Heidi to head back to the couch for a Sunday afternoon siesta while a cool breeze blew through the house. Sadie and Stella let me know that I probably should mow the yard. 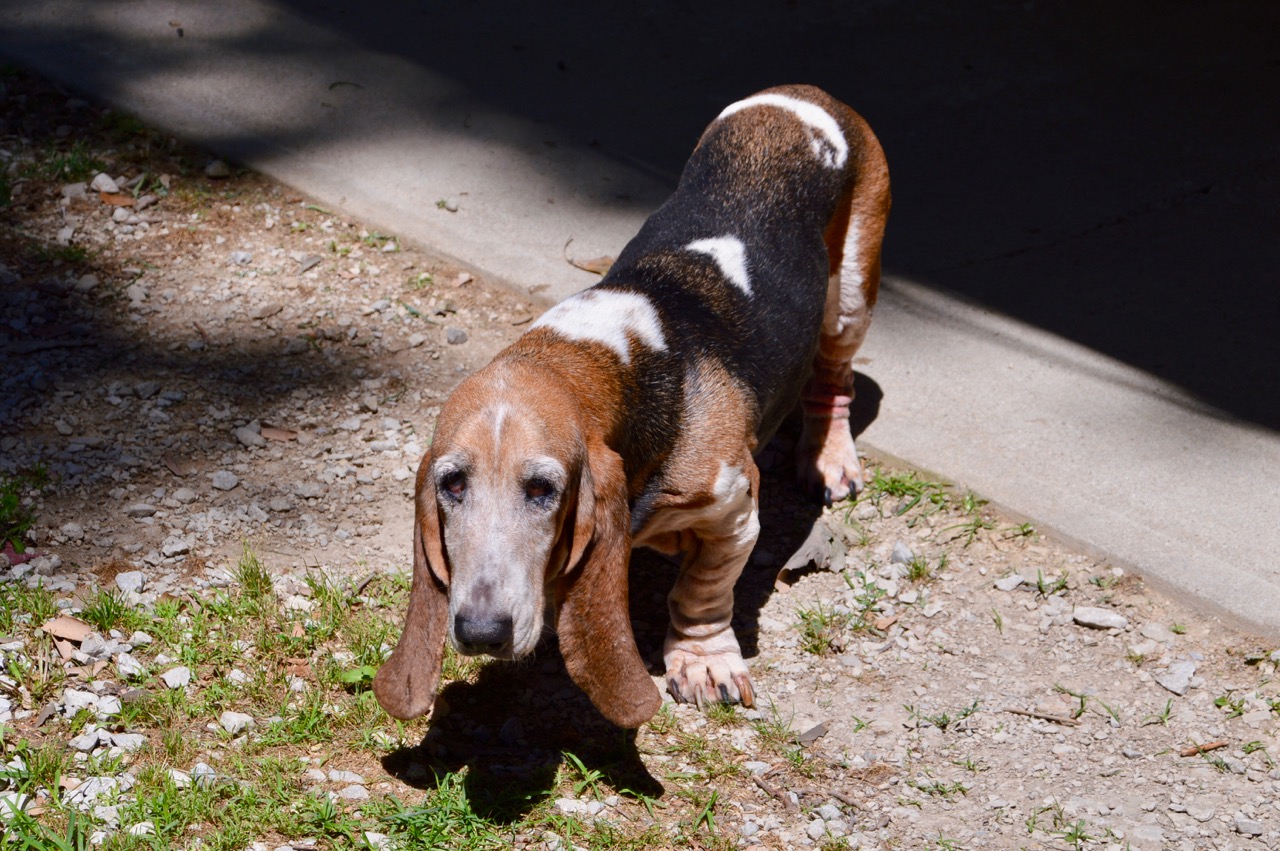 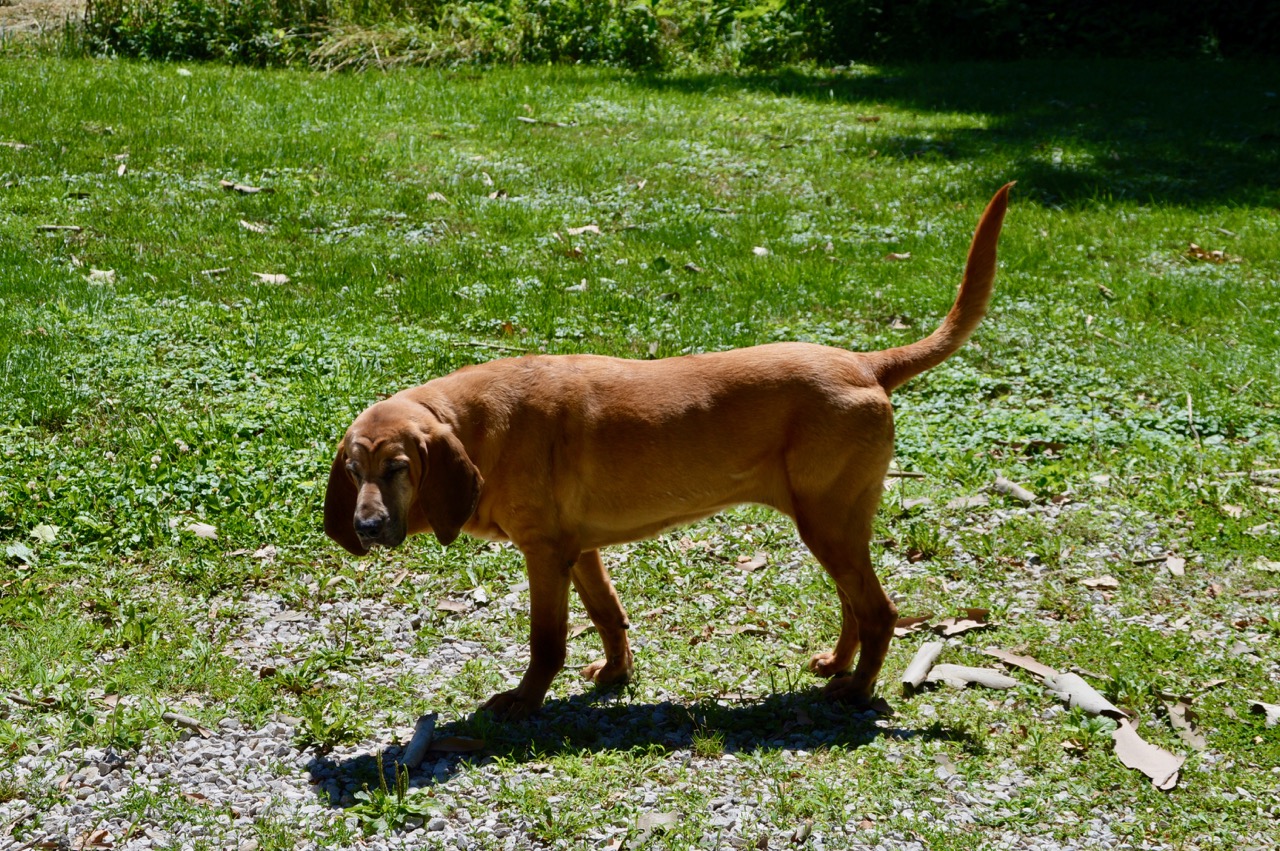 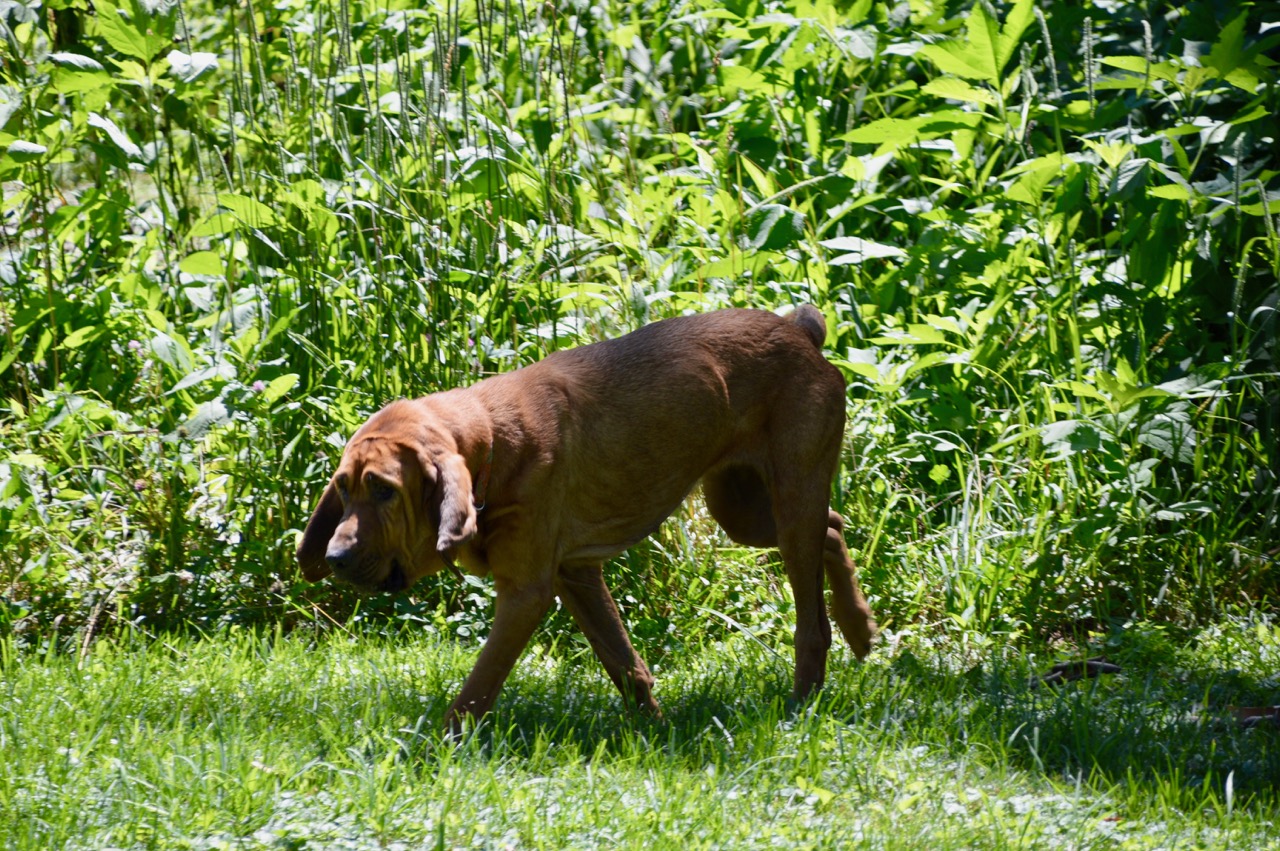 By 12:30pm I was able to sit down for lunch and watch the IndyCar race. That followed into a Reds game. Since they were winning today instead of that loss on Saturday I watched most of the game but not all. I had the sudden urge to take the Z4 out for a nice 50 mile drive. It's perfect weather right now at 75°.

I was going to wait until there was more shade on the front yard but after I finished the mowing the backyard I kept going. It might rain tomorrow and there's a very good chance for the rain to return this week from Tuesday through Thursday.

Once again this week the Garmin VivoSmart3 shows I went over my max heart rate while mowing the yard. It wasn't that hot nor was I going that fast but much more effort mowing with a push mower than I ever suspected. Following the 'old school way of figuring the max heart rate, mine is 160. That is taking 225 - my age. There is probably a more accurate way in today's math but we used that formula for years while training for bike races.

The Z4 doesn't get driven much but when it does it runs quieter and smoother than any car I have owned.

After three hound walks today, the hounds are beat and were in a deep sleep by 7:30pm.

All is good in 'the tropics' of Southern Indiana.
at June 25, 2017
Email ThisBlogThis!Share to TwitterShare to FacebookShare to Pinterest
Labels: Garmin VivoSmart3, Hounds Diet, Stella Trots, Z4 Drive