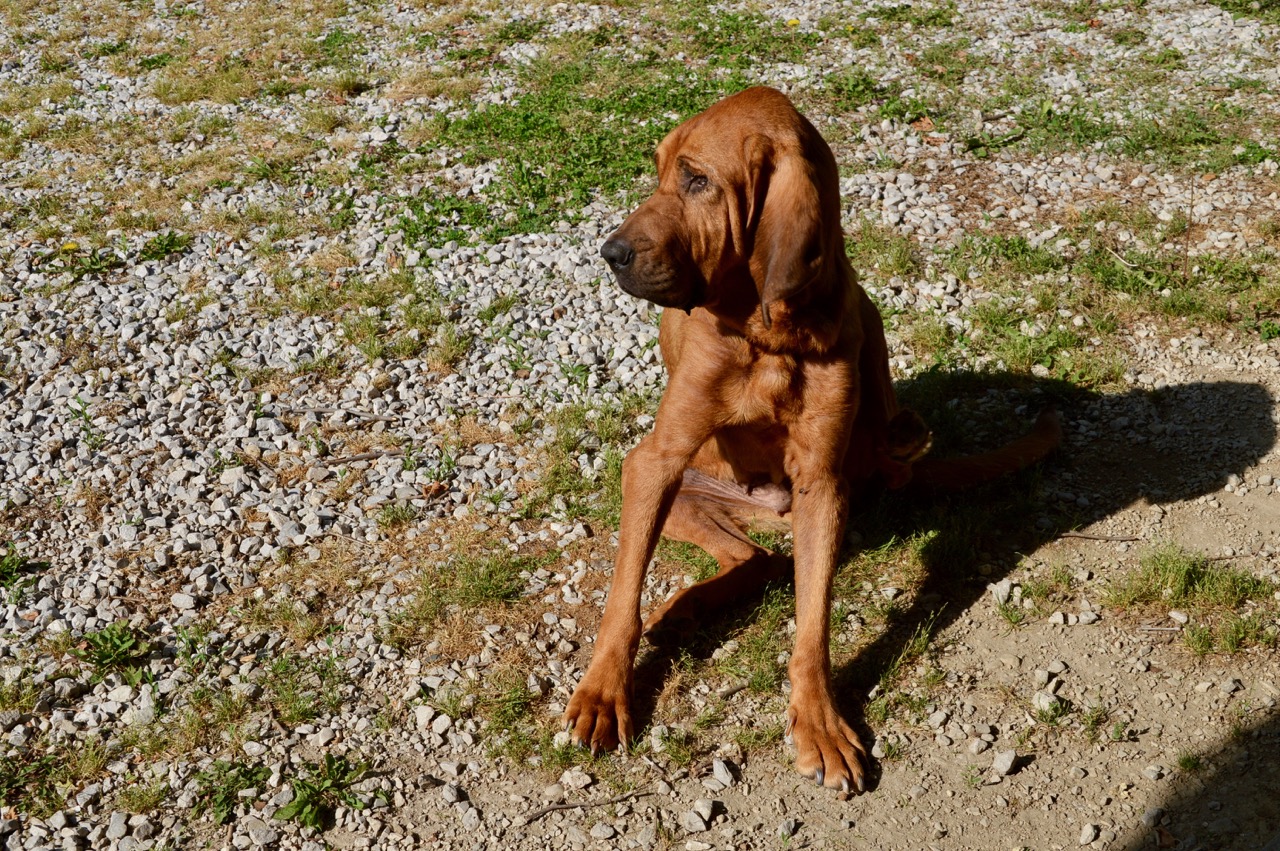 It really wasn't planned until soon after the walk started this morning. We started our morning a few hours later today because I was up last night until the wee hours of the morning looking through Pinterest. It was the first time I had ever really looked at all the info that was on that website. Stella didn't mind the late start ... she could tell she was going to have a good day today. 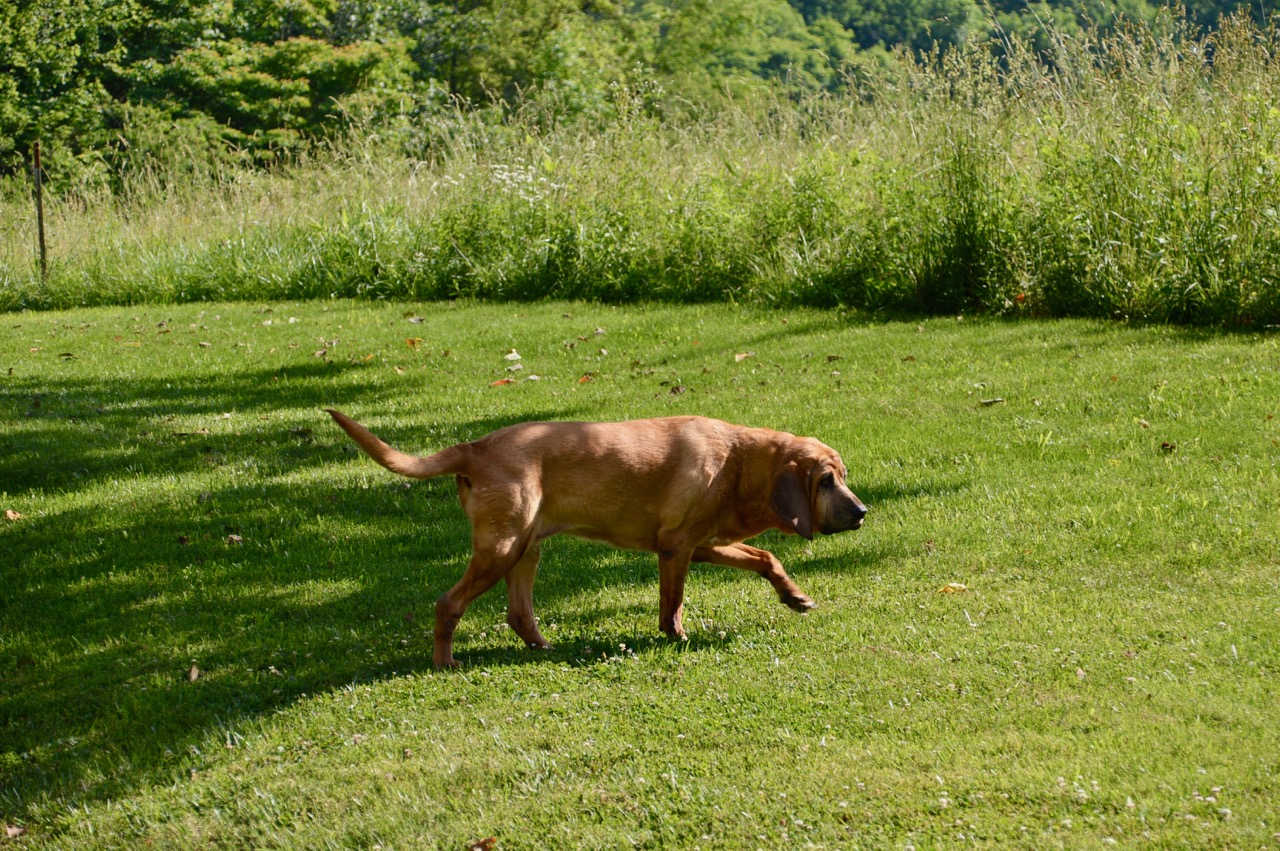 Sadie likes to start her day by searching for that black cat that I saw weeks ago but she has never seen. She knows it has been through 'her' yard and she wants to make sure the cats and the moles are not out and about when she is in the yard. At least she does not dig for moles ... but she can smell them. 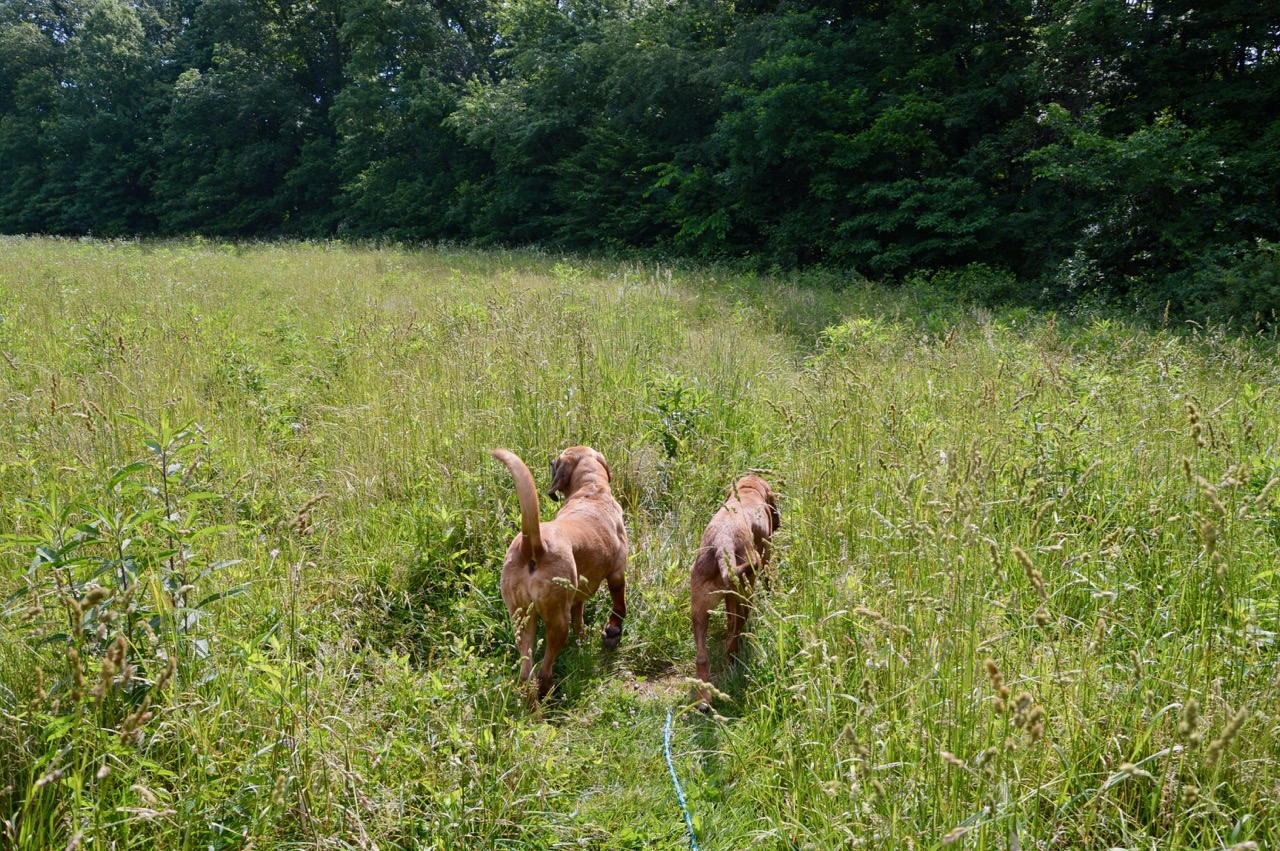 Once again Stella trotted past me as I stepped into the field, to catch up to Sadie. It wasn't a run but fast enough that I could not catch her on camera. That is good to see. It leans her situation to the more positive side when wondering if/what is wrong with her. 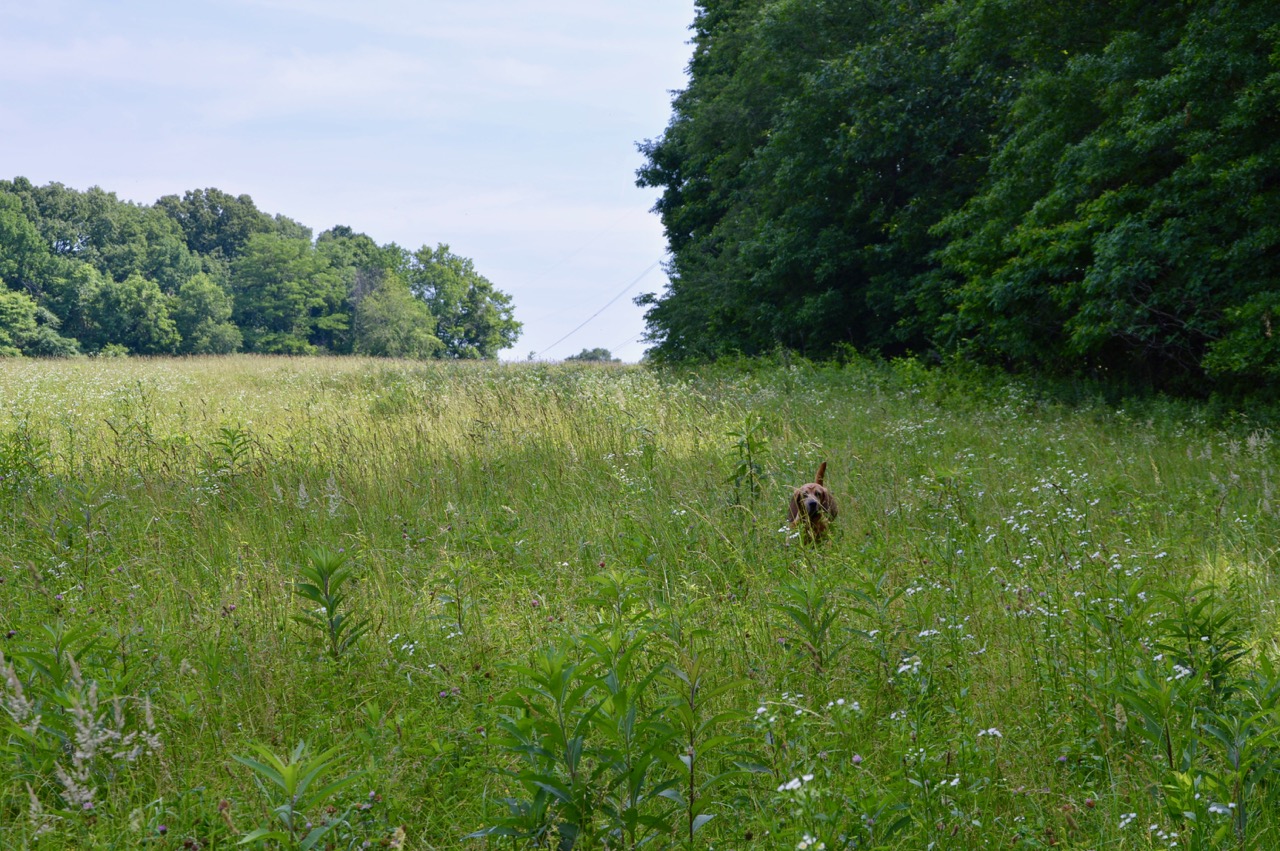 Sadie was so anxious to get started on the walk that she stopped and looked at Stella and I wondering what the hold up was. She had places to go and scents to check out and after all we were a couple of hours late this morning. 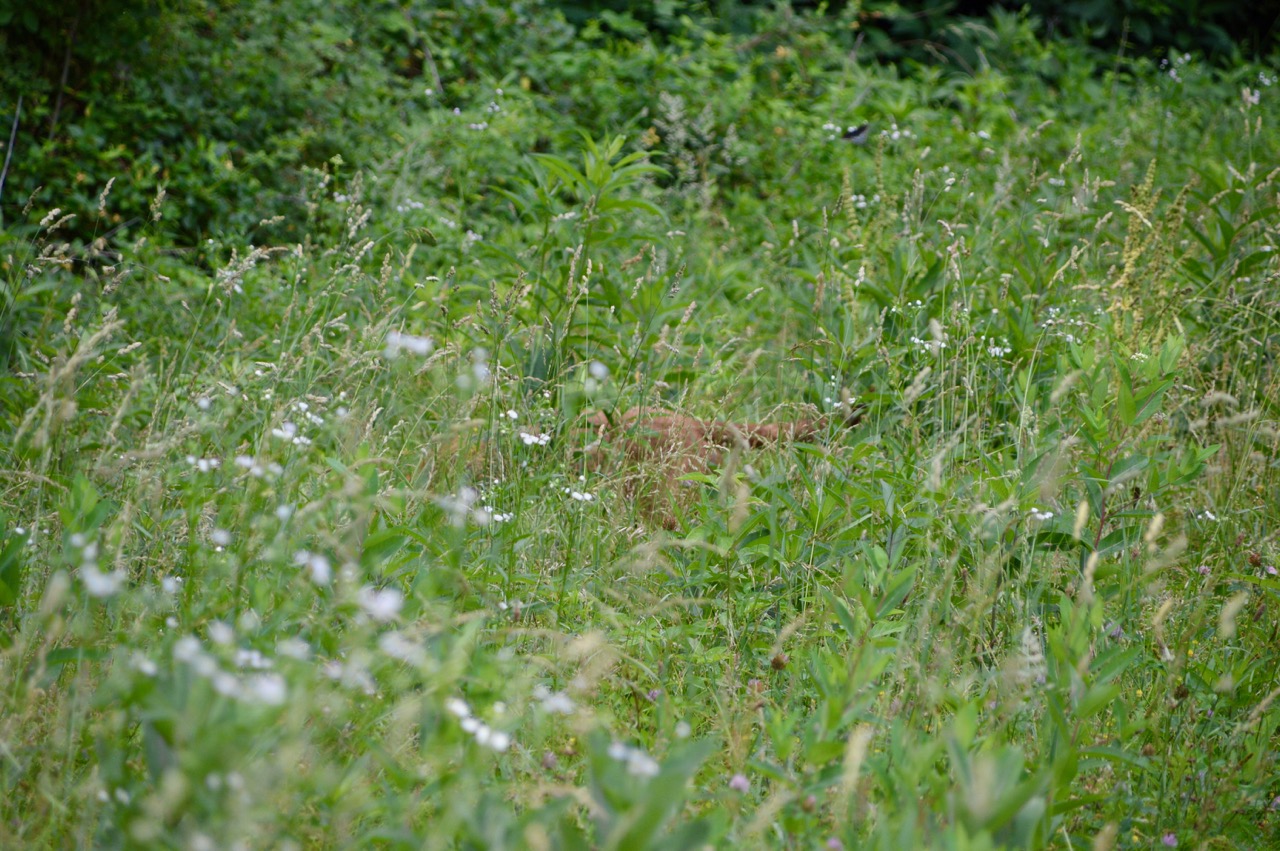 I could tell as soon as Stella stopped and very early in the walk that she wasn't going to move. With the high temps of 86° yesterday, it was already hot and muggy as I waited for her. It was at that time I thought to myself "why not" ???  Let's end the 'adult supervision' on her walk and let her do what she wants at her own pace.

Since she was not running these past few months it would be doubtful she would take off chasing deer if she saw them. Her walking pace has slowed down from 'slow' to 'slower', so I was pretty sure that she wouldn't get too far once me and Sadie were on our way back home. 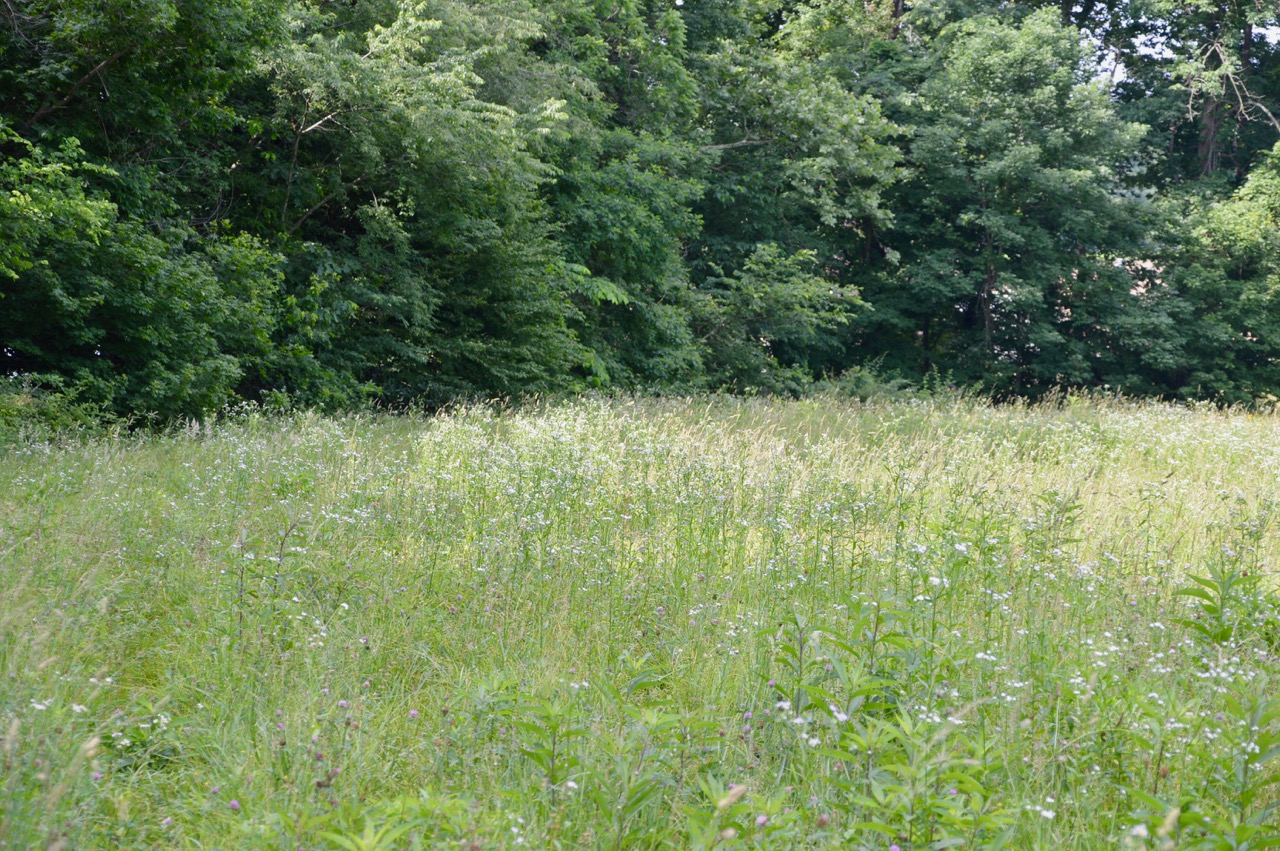 While Sadie and I approached the first turn I looked back to see if there were any signs of Stella running toward us. As you can see, she may have been heading our direction but the tall grass made it hard to find her. I figured there would be two spots I'd find her on the way back and I was willing to let her roam on her own today ... for the first time in a couple of months. 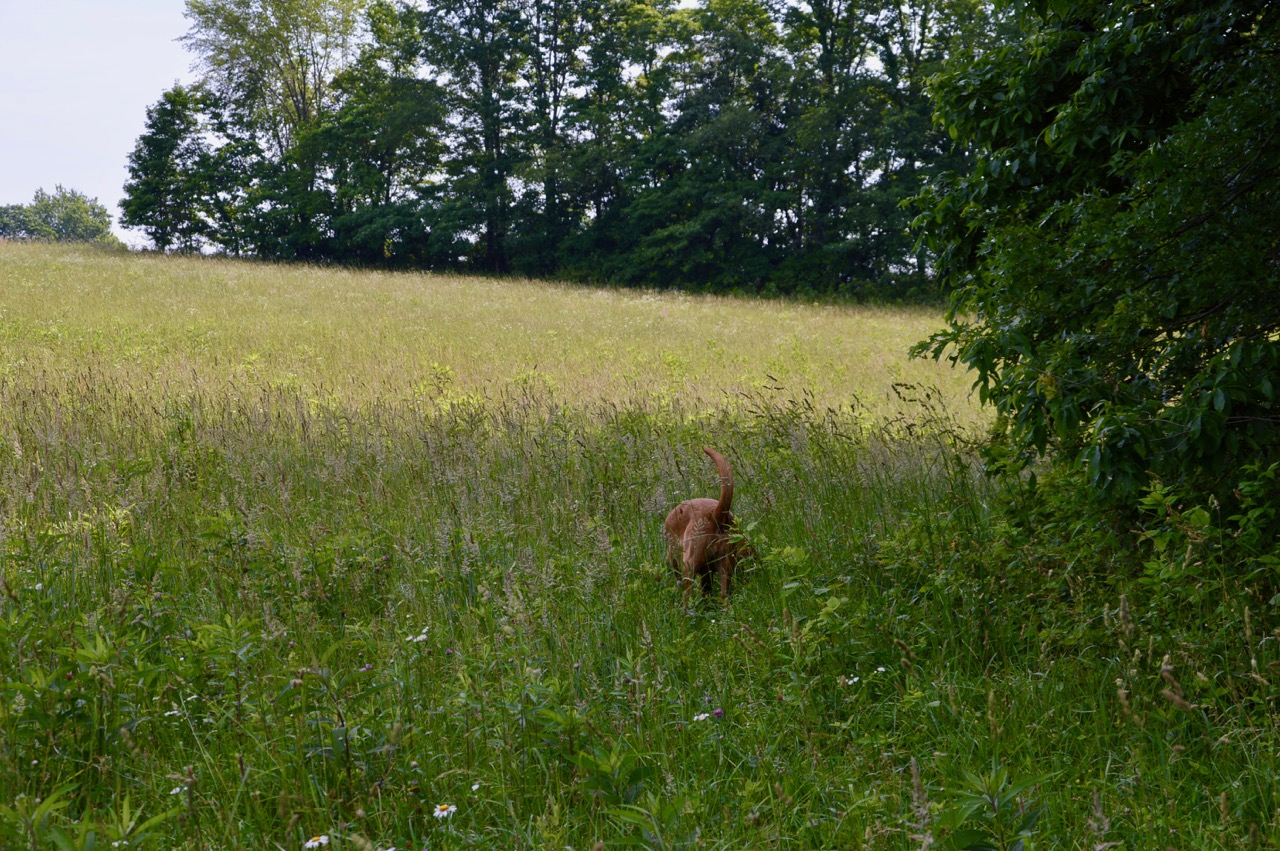 Sadie charged on not even waiting for me to catch up. I had to zoom the camera lens to even get this close to her. 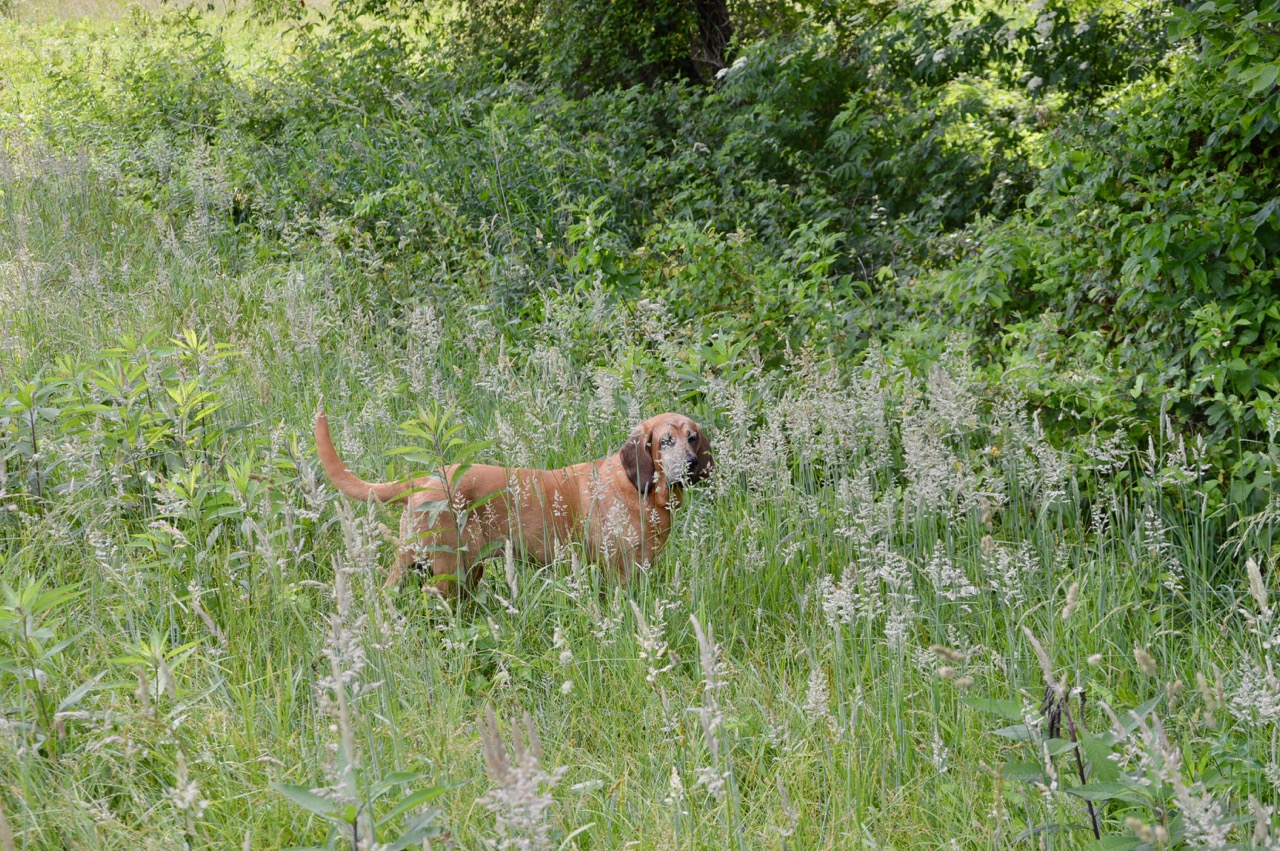 She also did a final check to see if her 'partner in crime' was coming. She could do what I couldn't to get her answer ... smell and listen for Stella. 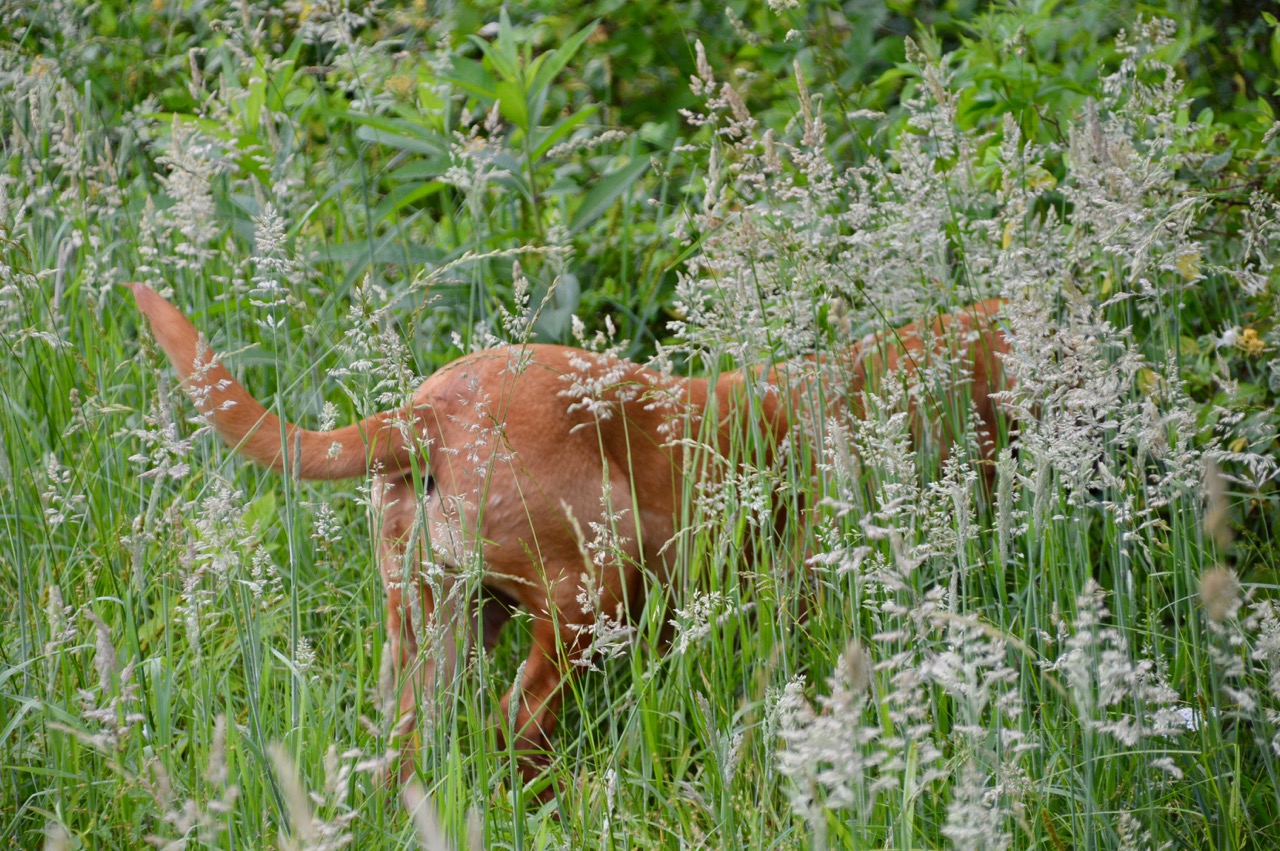 Just as she got very interested in the spot where she was standing I heard what I assumed was a rabbit making it's escape with the sounds coming from the wooded area. It was loud with something running away, so maybe it was something besides a rabbit. 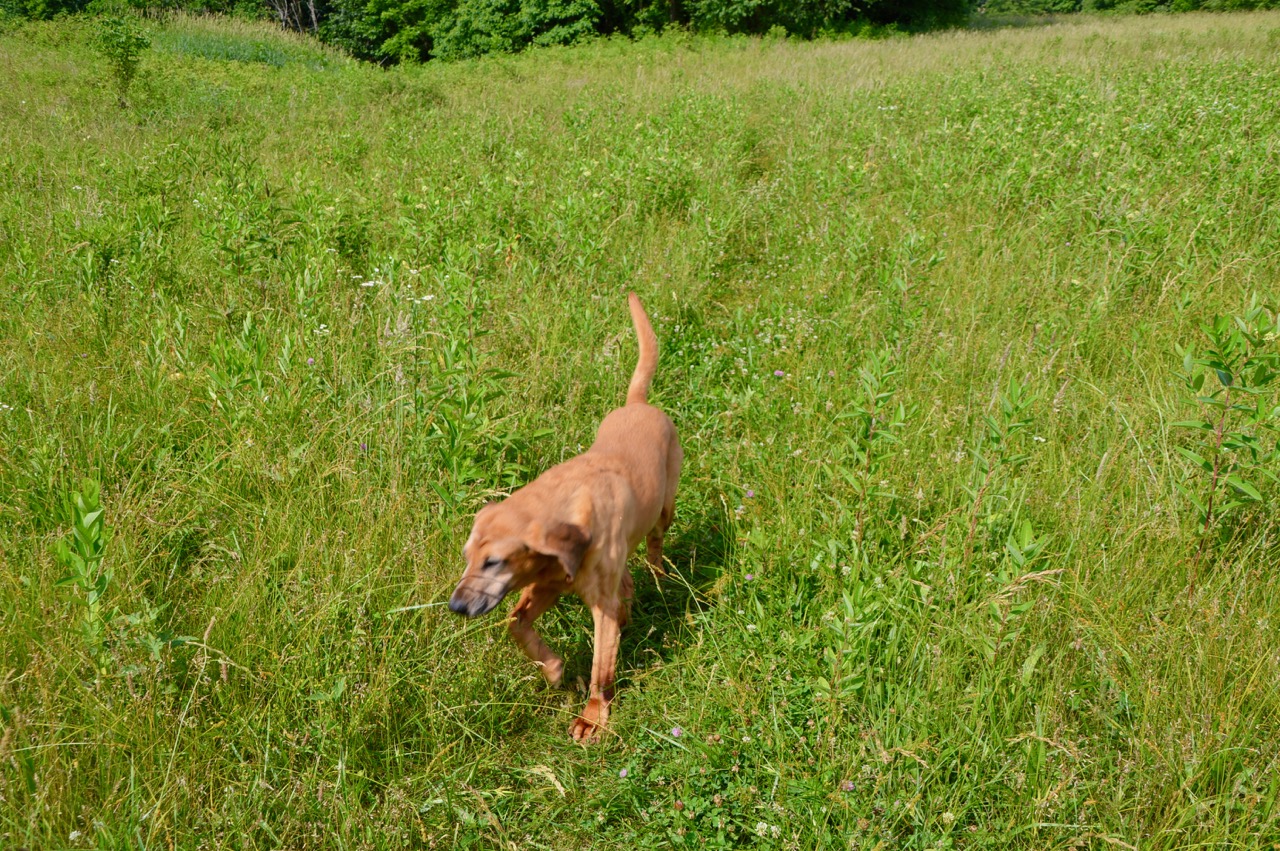 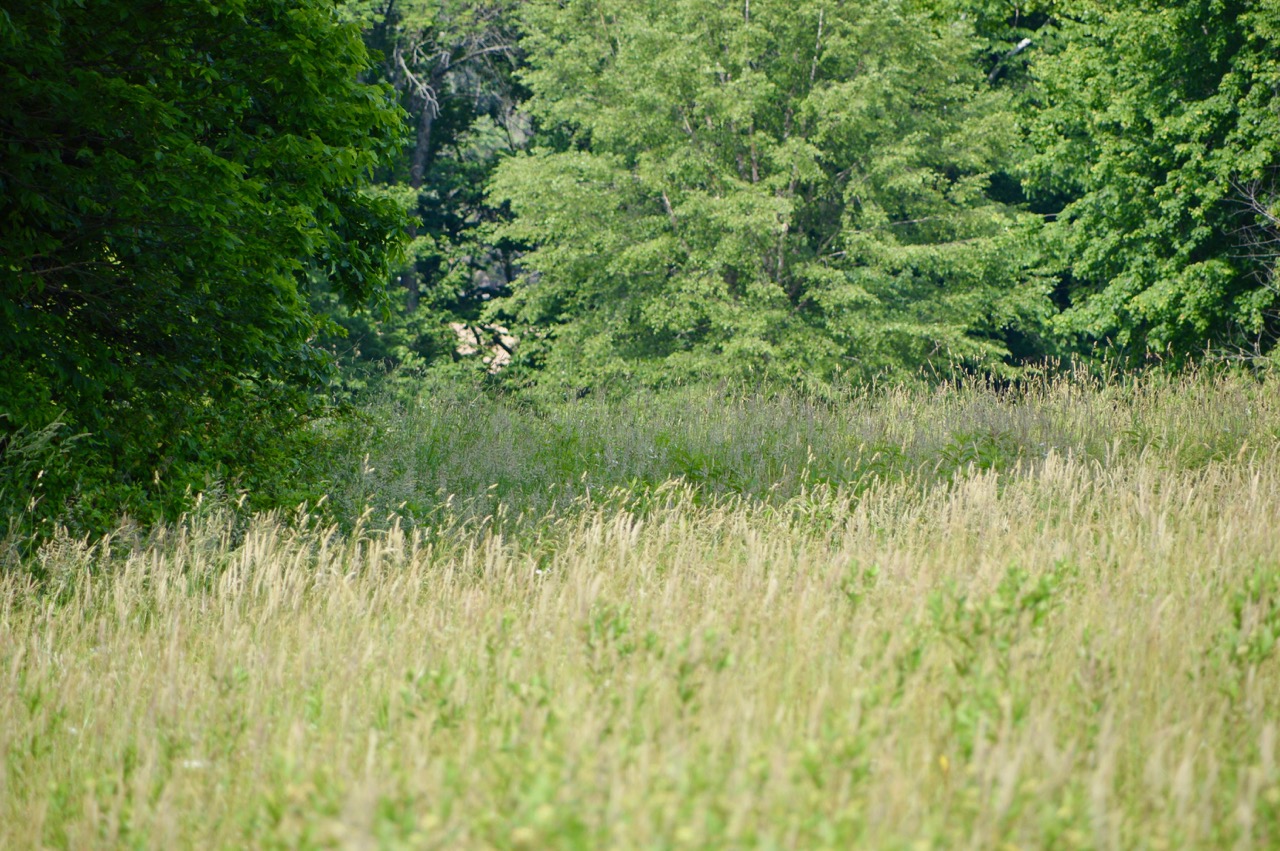 As Sadie and I neared the back edge of the field, I turned to check on Stella. I did not expect to see any signs of her and I could tell from this angle it would be hard to see her once we started our return home. Although the center of the lower part of the field isn't nearly as tall as it is near the backyard or this photo angle. 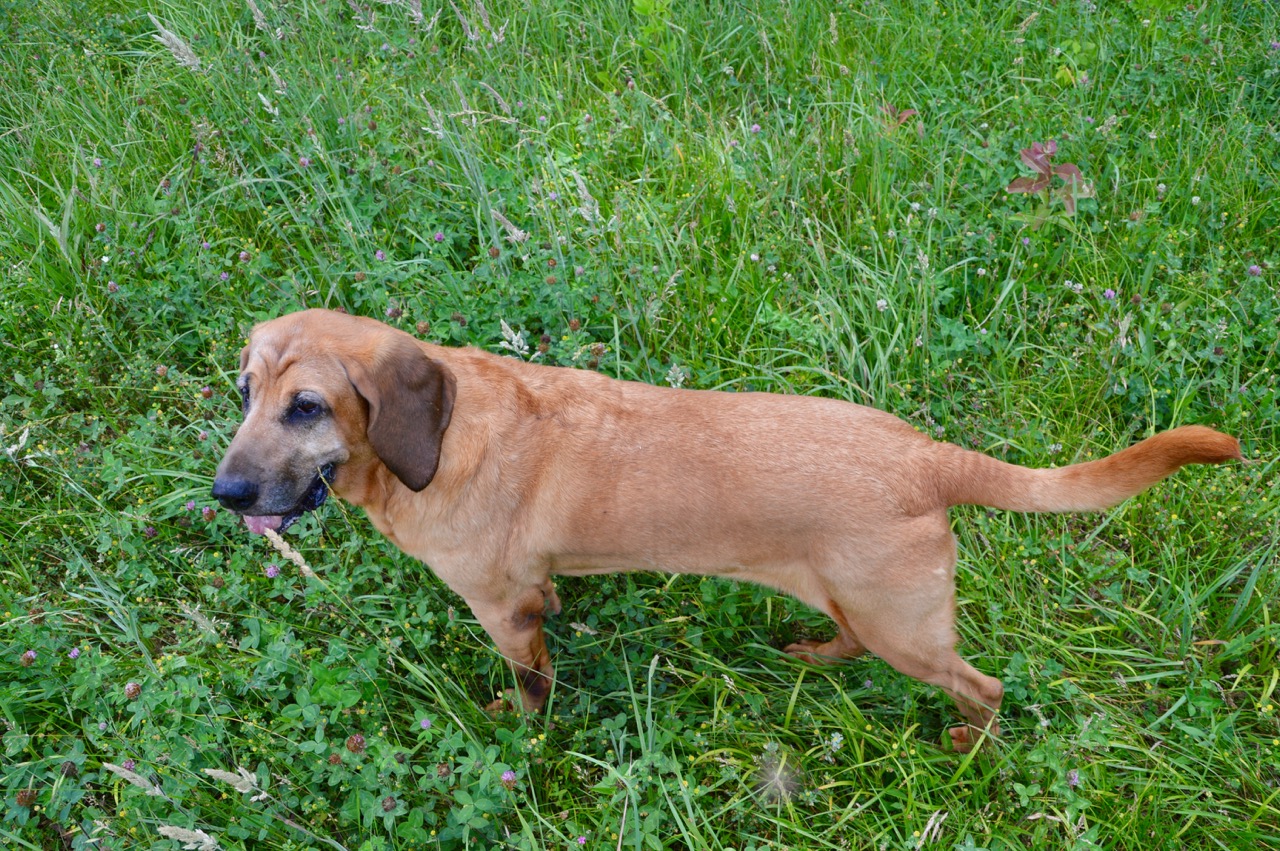 As Sadie walked along side of me along the back ... I could tell the heat was getting to her. It was in the high 70's but felt muggy. 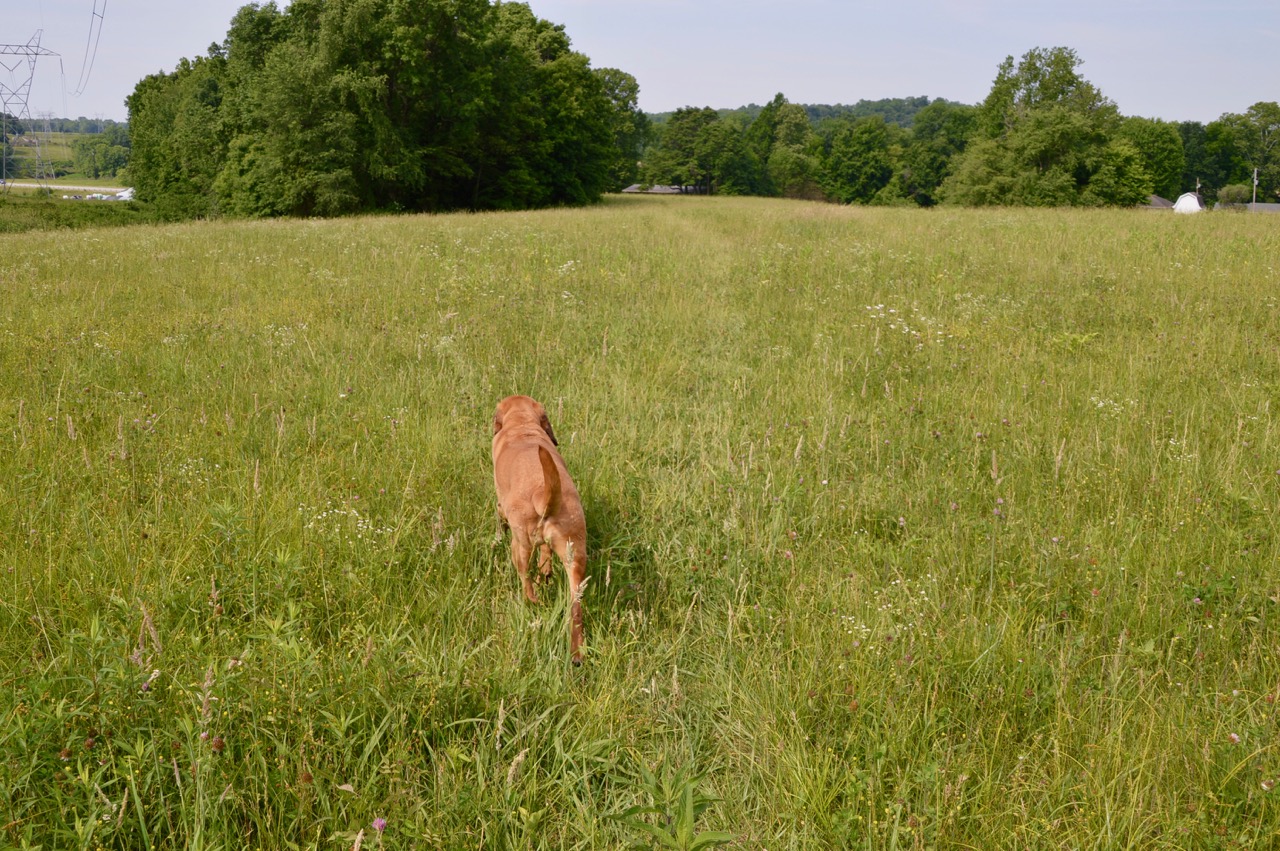 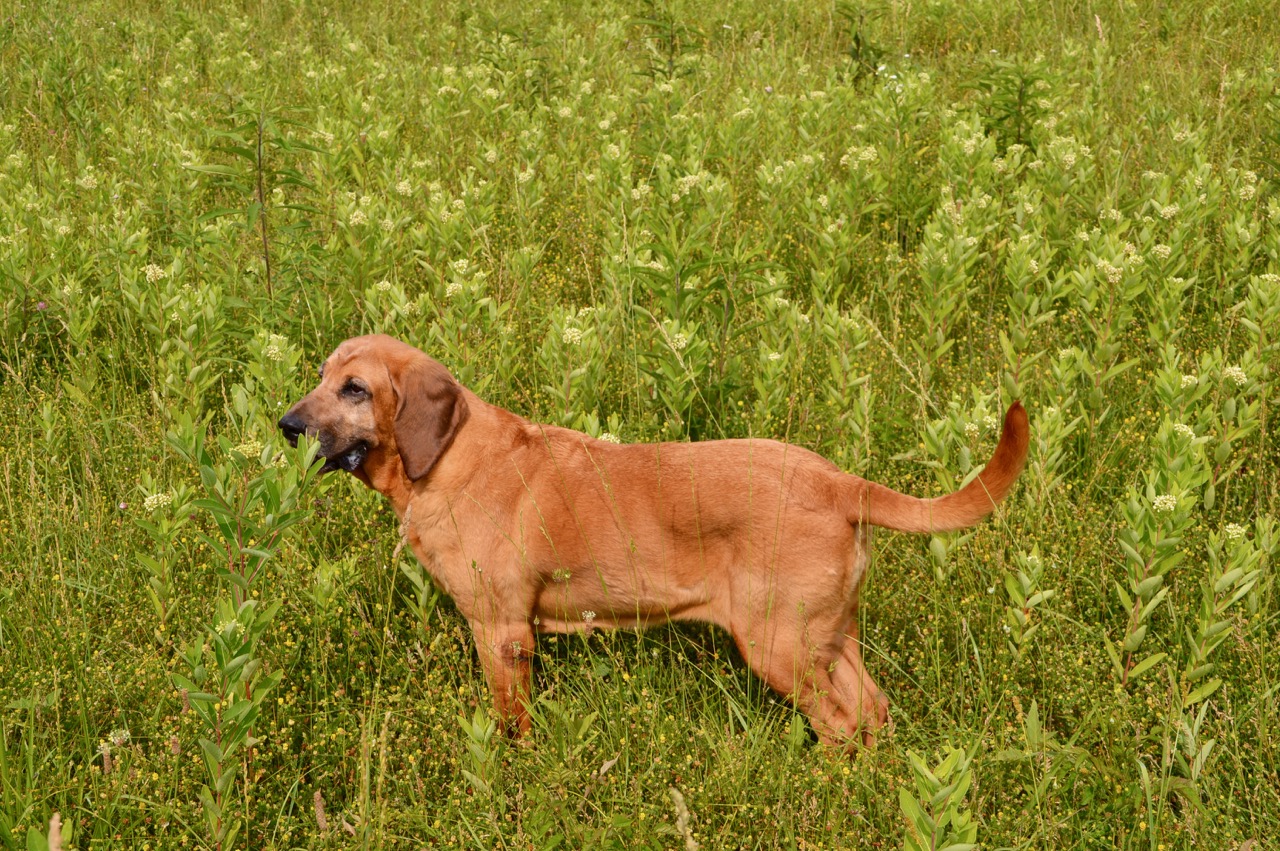 As we turned for home I told Sadie "go find Stella" ... she took off and then stopped to smell the air, hoping to pick up Stella's scent. 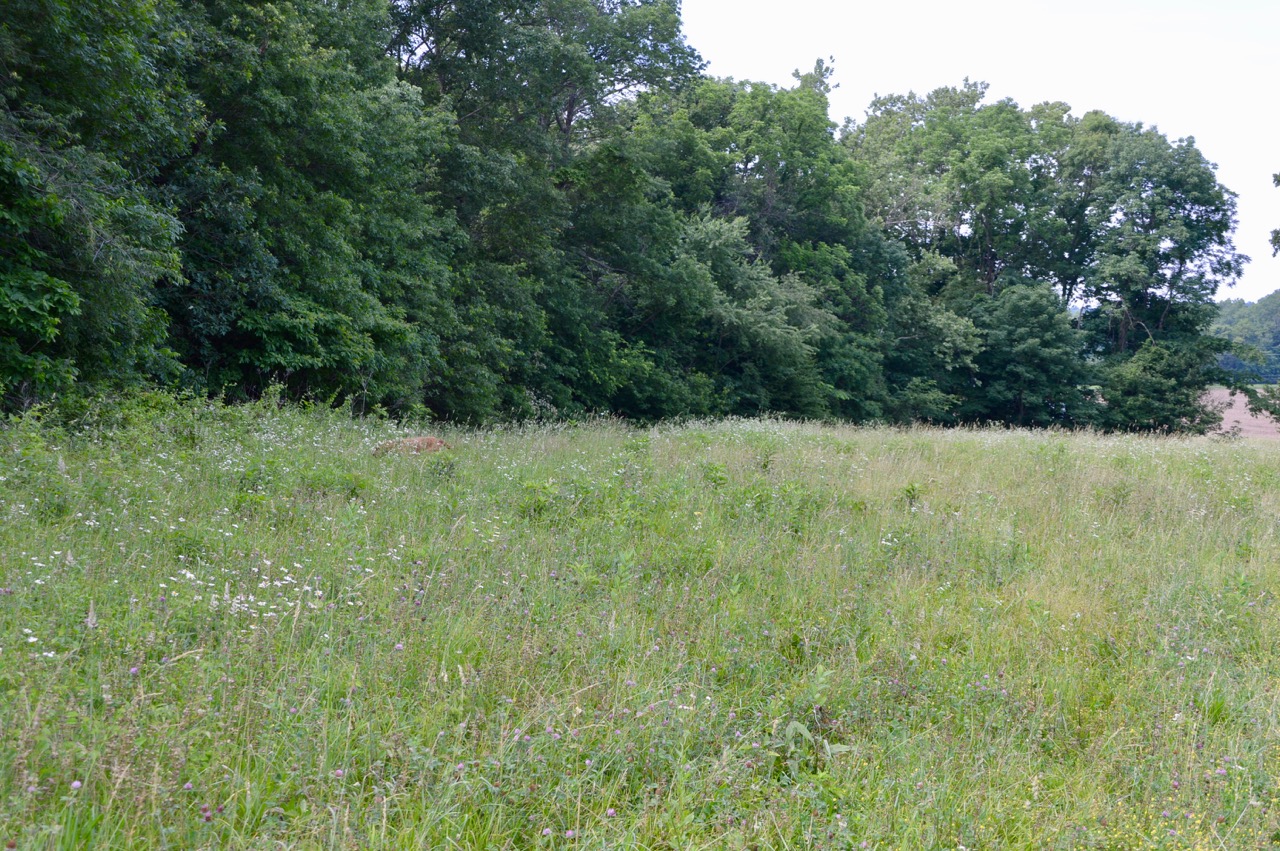 What a shock it was to glance left of me along the path we take 'out' to the field when I saw 'moving red' ... it was Stella. She had moved no farther than from the edge of the tree line on the right side of the picture to where she is seen now. 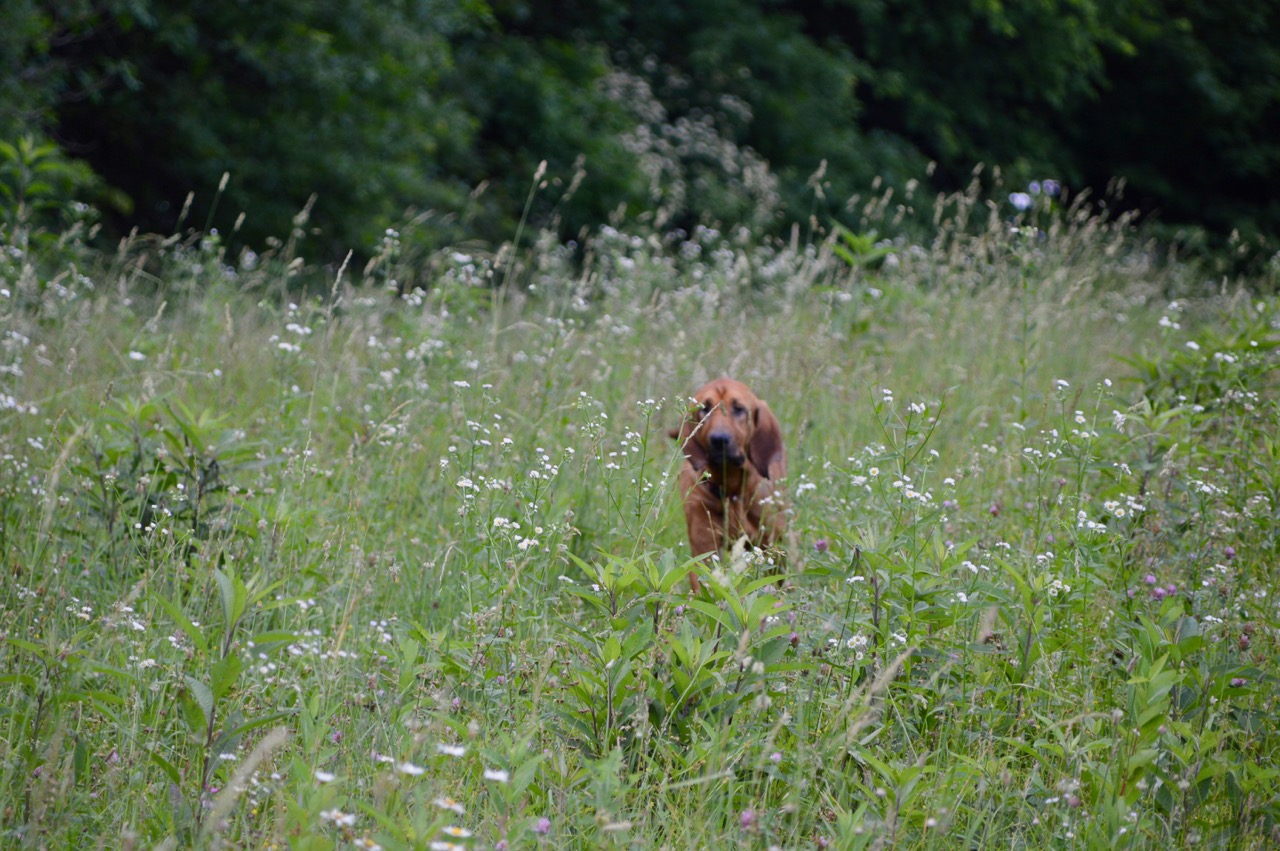 She was as surprised to see me as I was her ... she started a slow trot my direction. I don't think Sadie saw her because she was heading up the return path toward home. 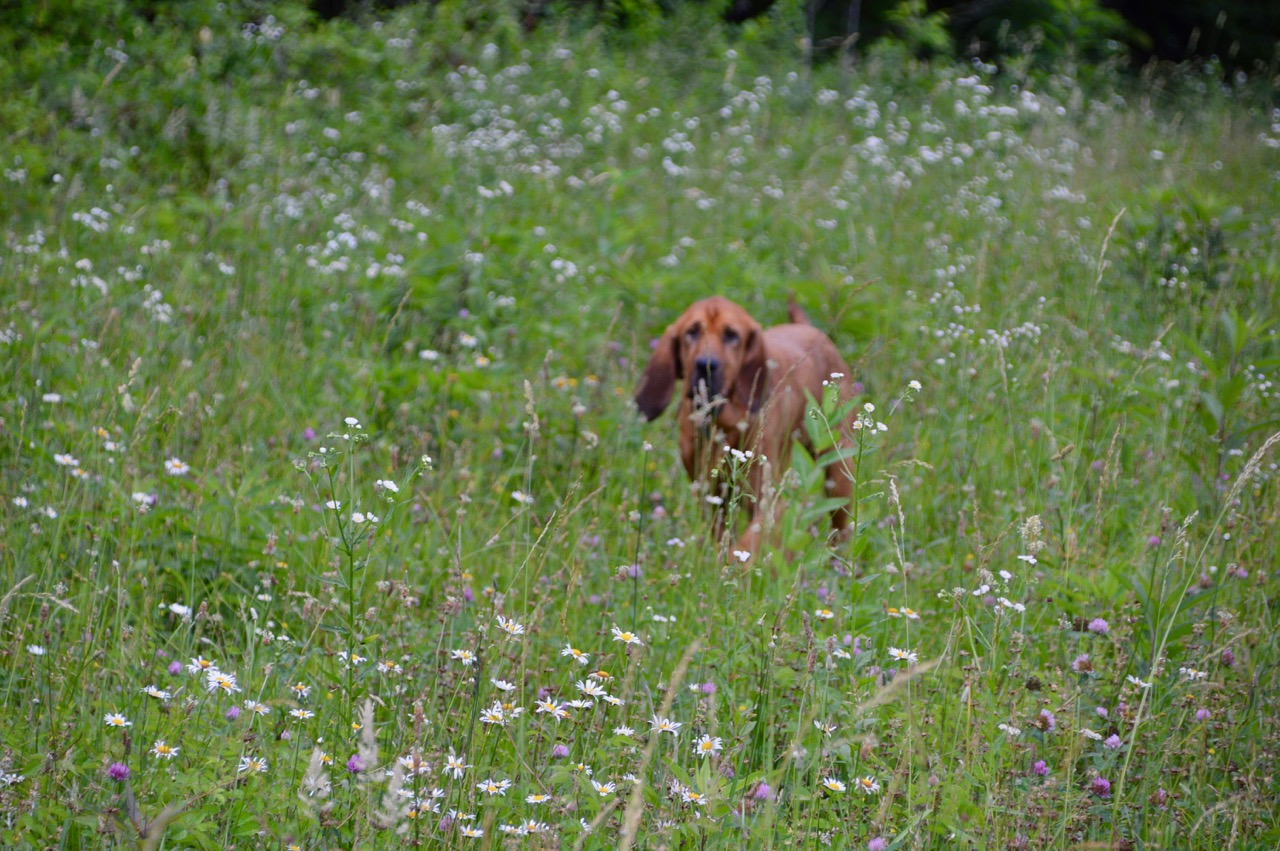 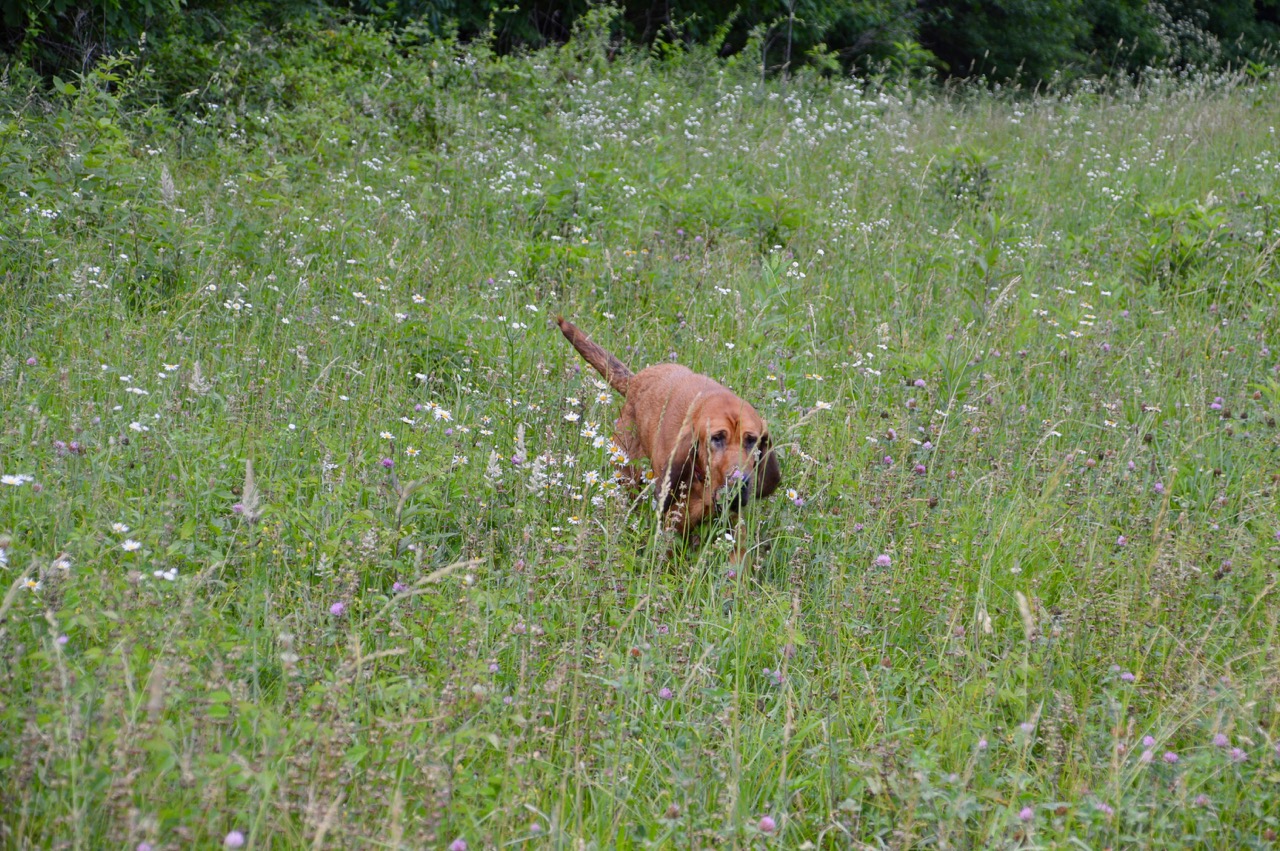 Since bloodhounds feel that the earth spins on their time and everybody should adjust their own schedules to theirs, it was no surprise to see her trot right past me and head up the return path as if we were going to start the walk over, so she could finish the 1/2 mile trek. 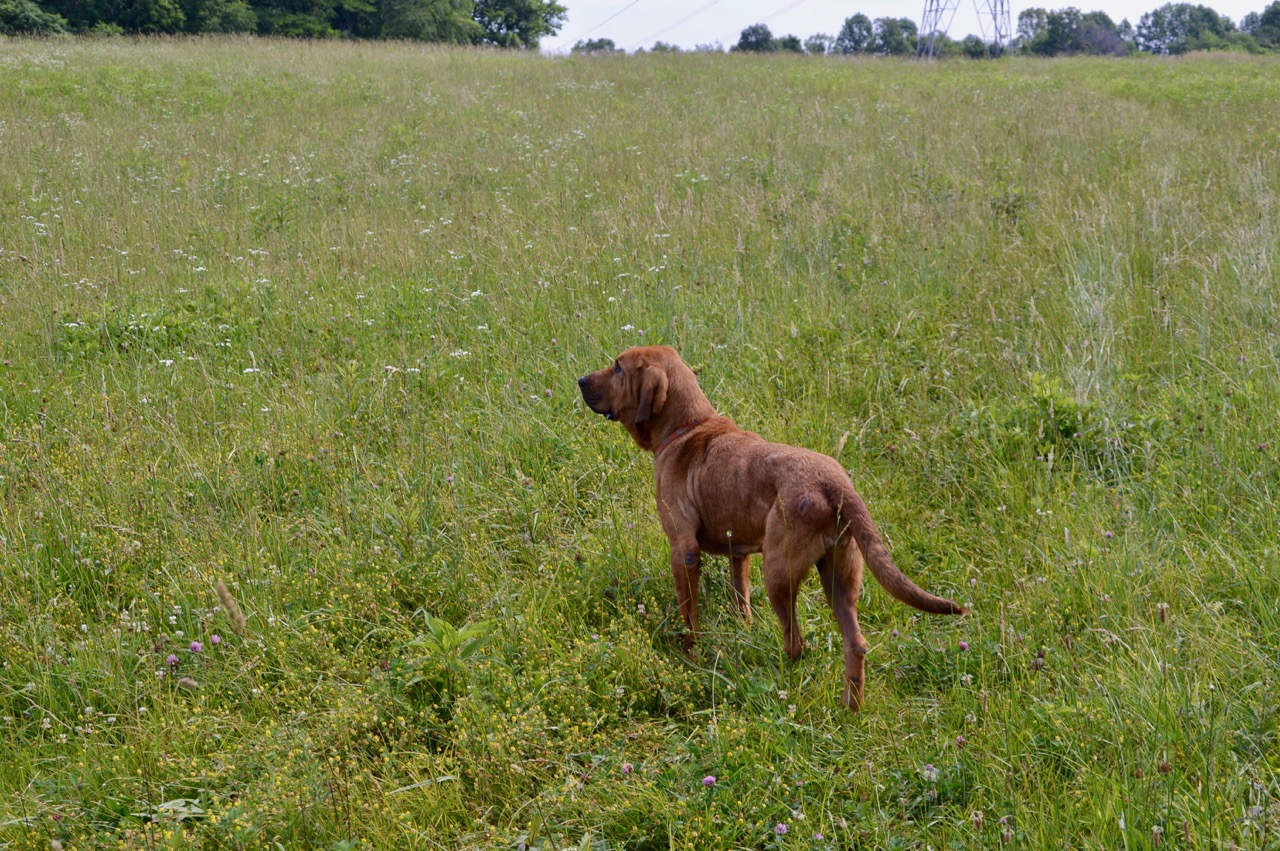 She even veered in the direction of the neighbors house but followed along the side of me once I called her name. 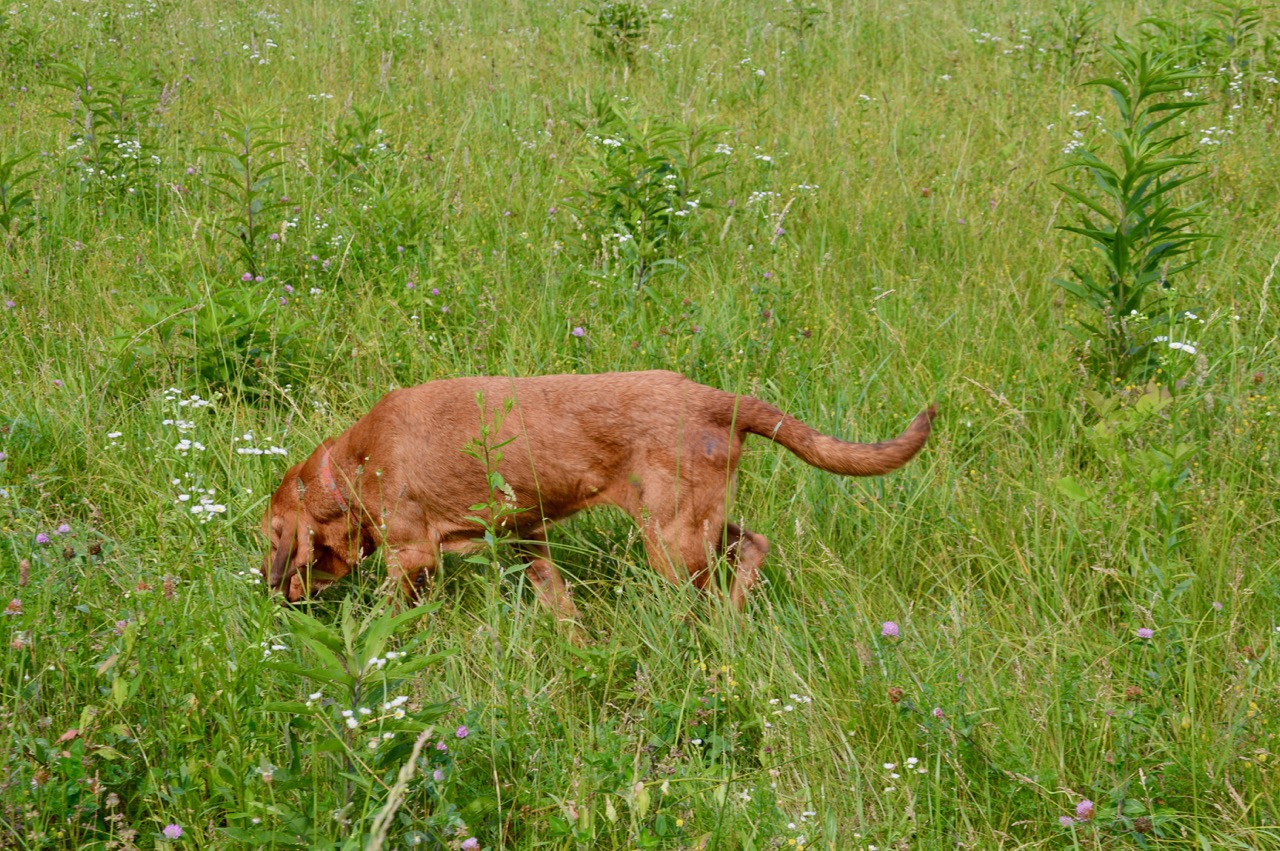 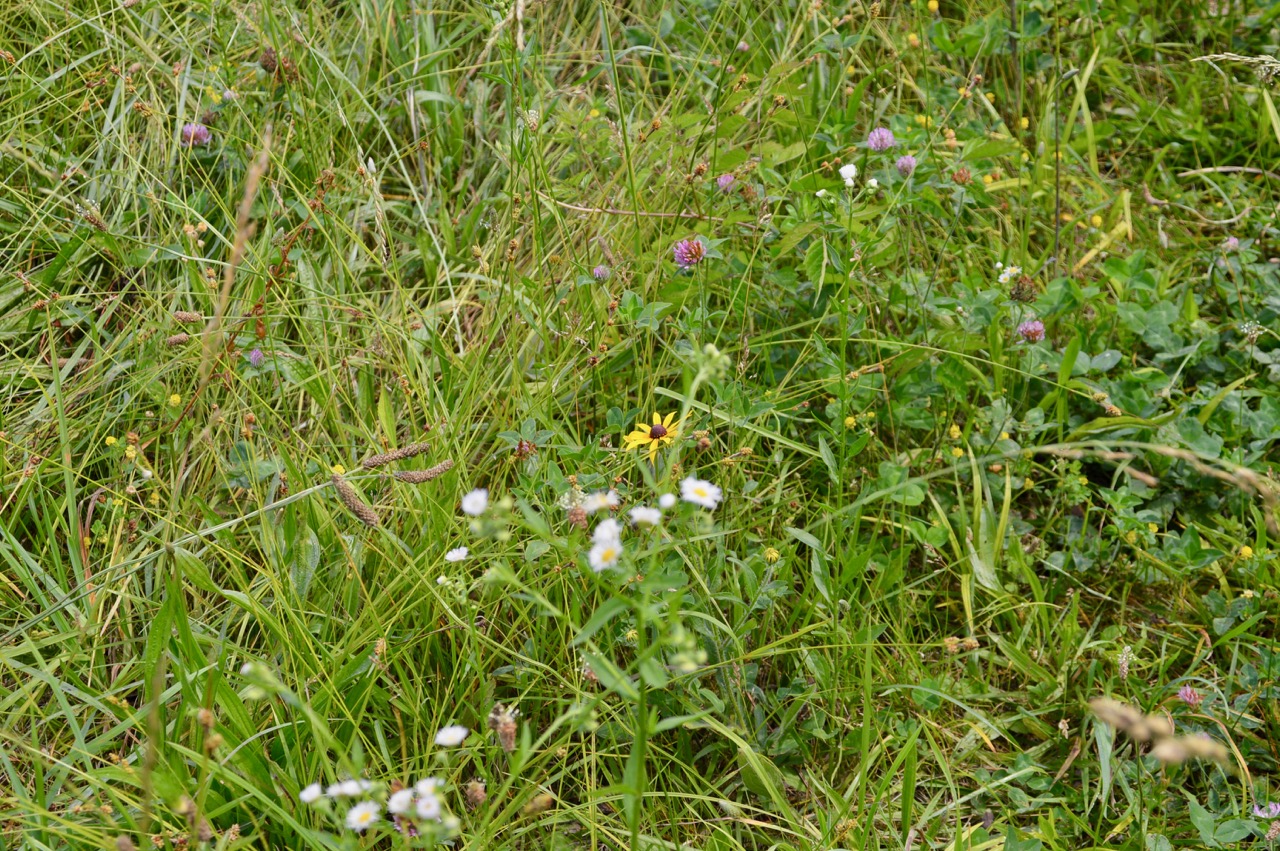 Since Sadie and I were back on Stella's pace it took probably as much time to walk from here to the house as it did for Sadie and I to do the majority of the walk. There is always enough new scents to check out even in the end. 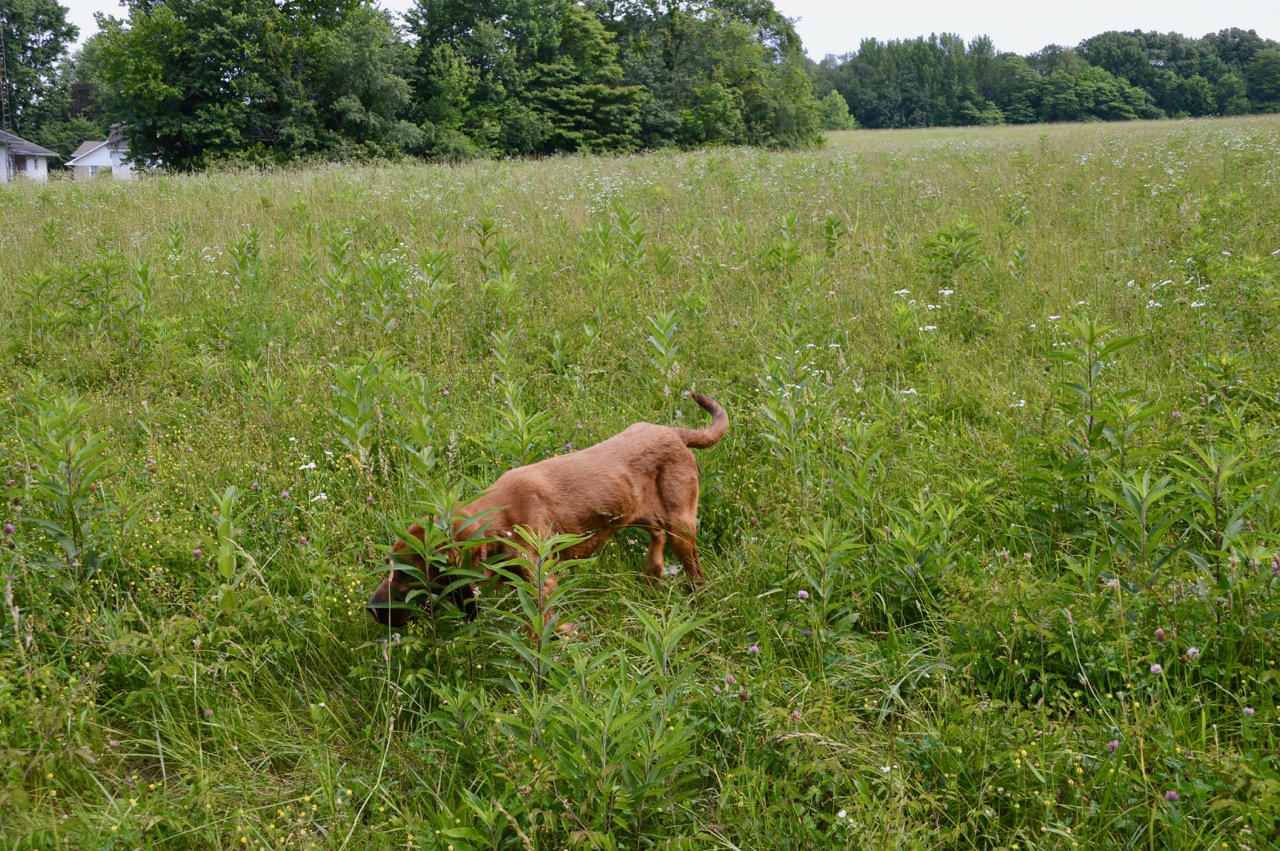 Sadie was in a hurry to get back inside where it was cooler, while Stella never sped up. That's fine with me ... I was happy to see her active and enjoying herself. 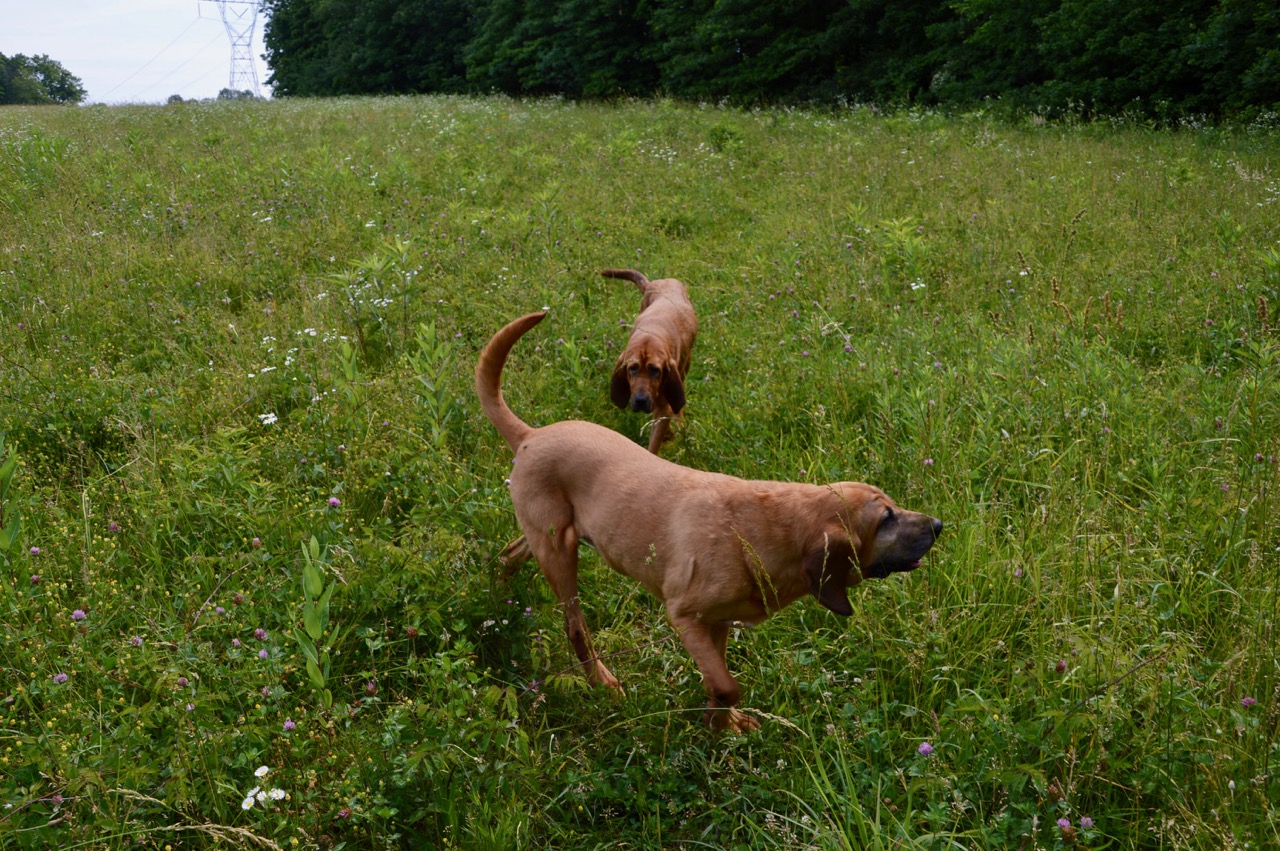 It's too bad that the floods occurred a few weeks ago, where they had to plow under the damage and replant corn in the brown area. Turning right behind the trees is where the majority of this field lies. It goes for almost a half mile and all of that was replanted. 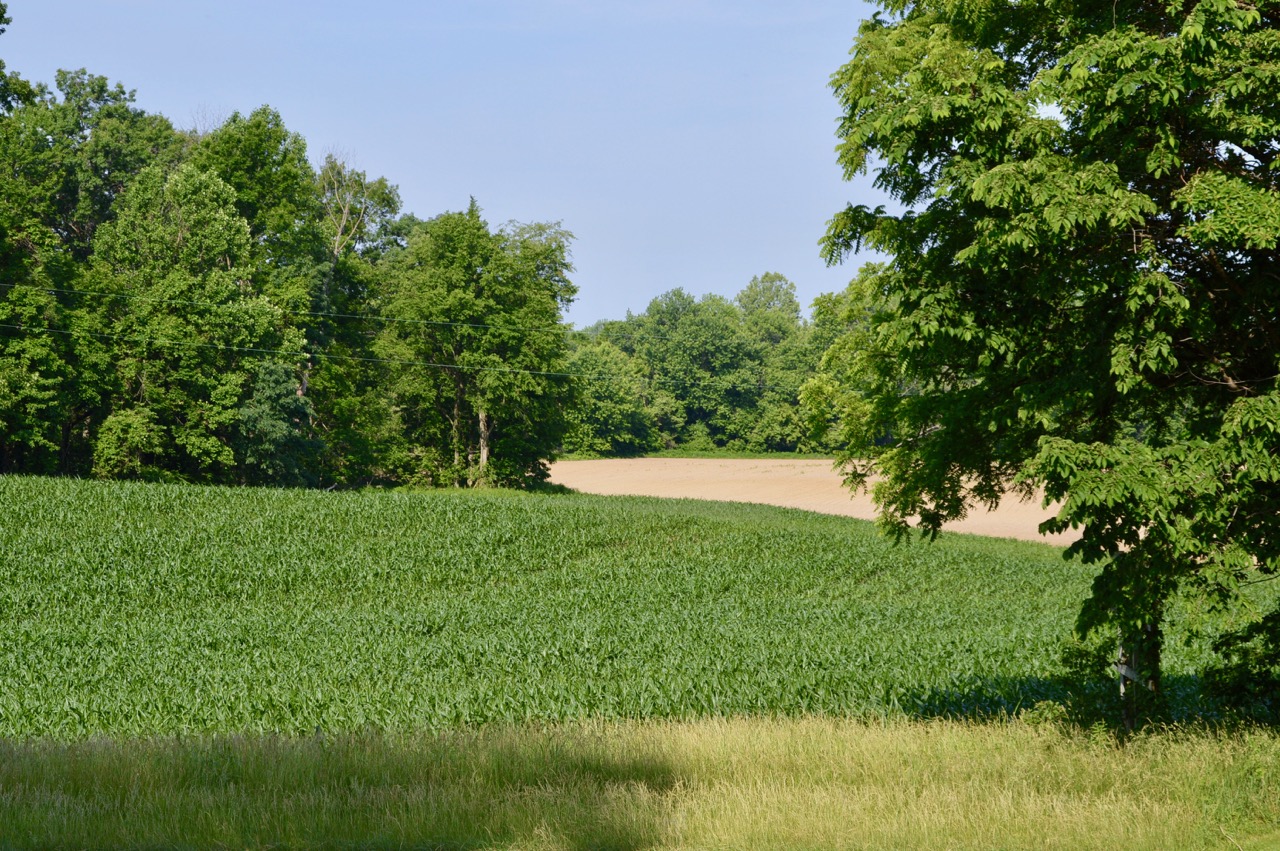 This field is to the left across the one lane gravel road. It was the 'field of yellow' ... wild mustard flowers. Once the floods overtook the field, this is what is left. I can't tell if they went in and cut some of it down while we were taking a siesta here at the house ... but I wonder if they plan on planting anything. Shows you how much I know about farming (nada .. zip) when I ask a question like that. 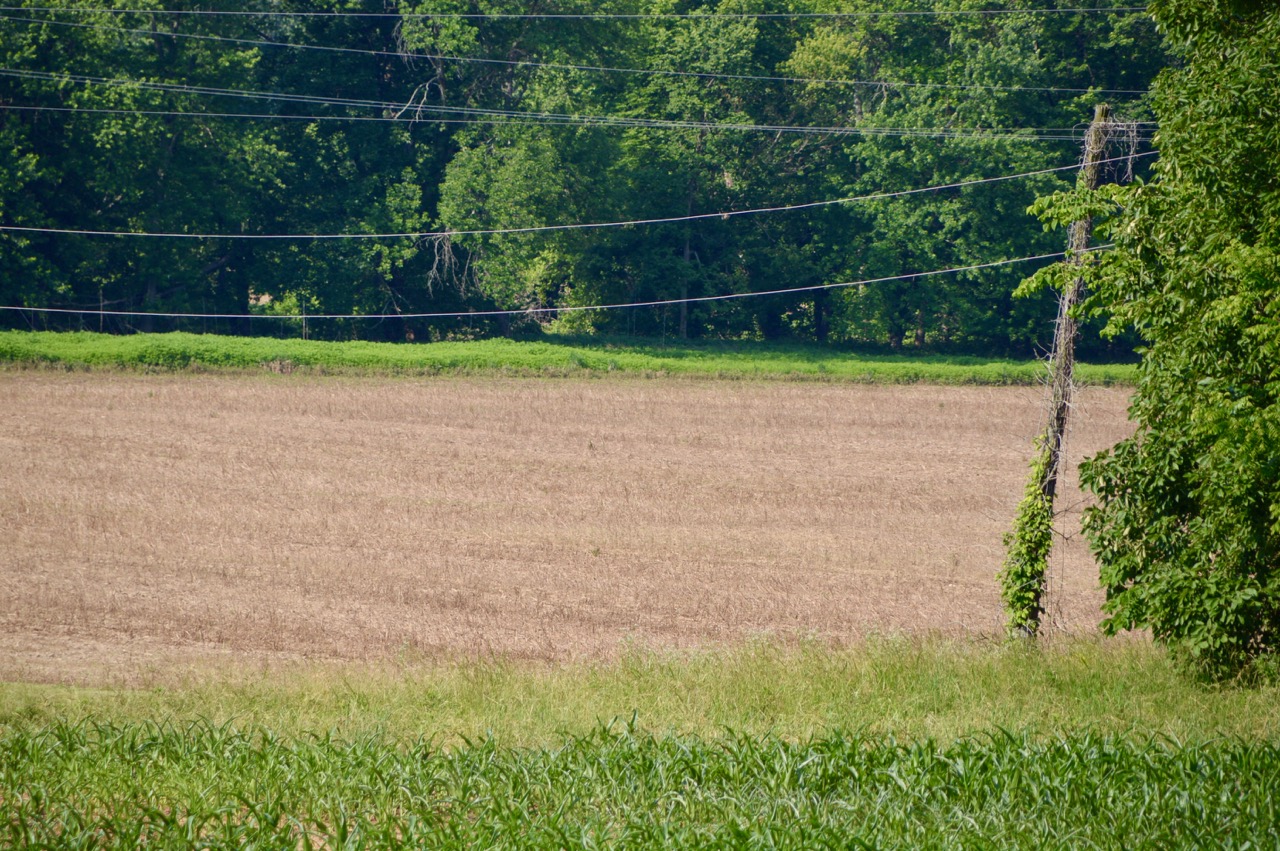 I also have the same question about the field behind the one we walk in. What are they waiting on or are they going to give the land a year off from producing crops? 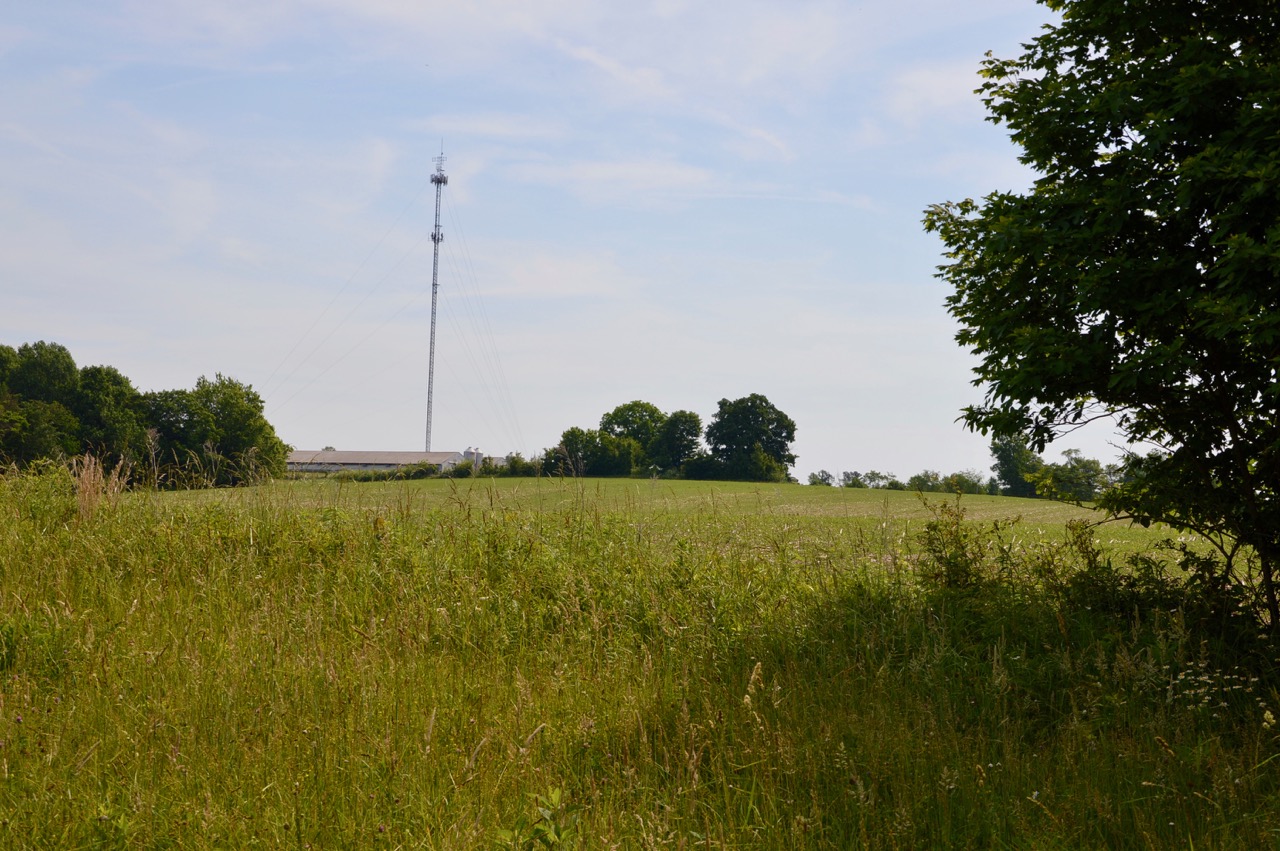 Everybody is in the mowing mood today. While writing this post I heard tractors so I grabbed the camera in just enough time to catch the 2nd one doing what the state highway department will do months from now ... mowing the grass between his field and the highway. 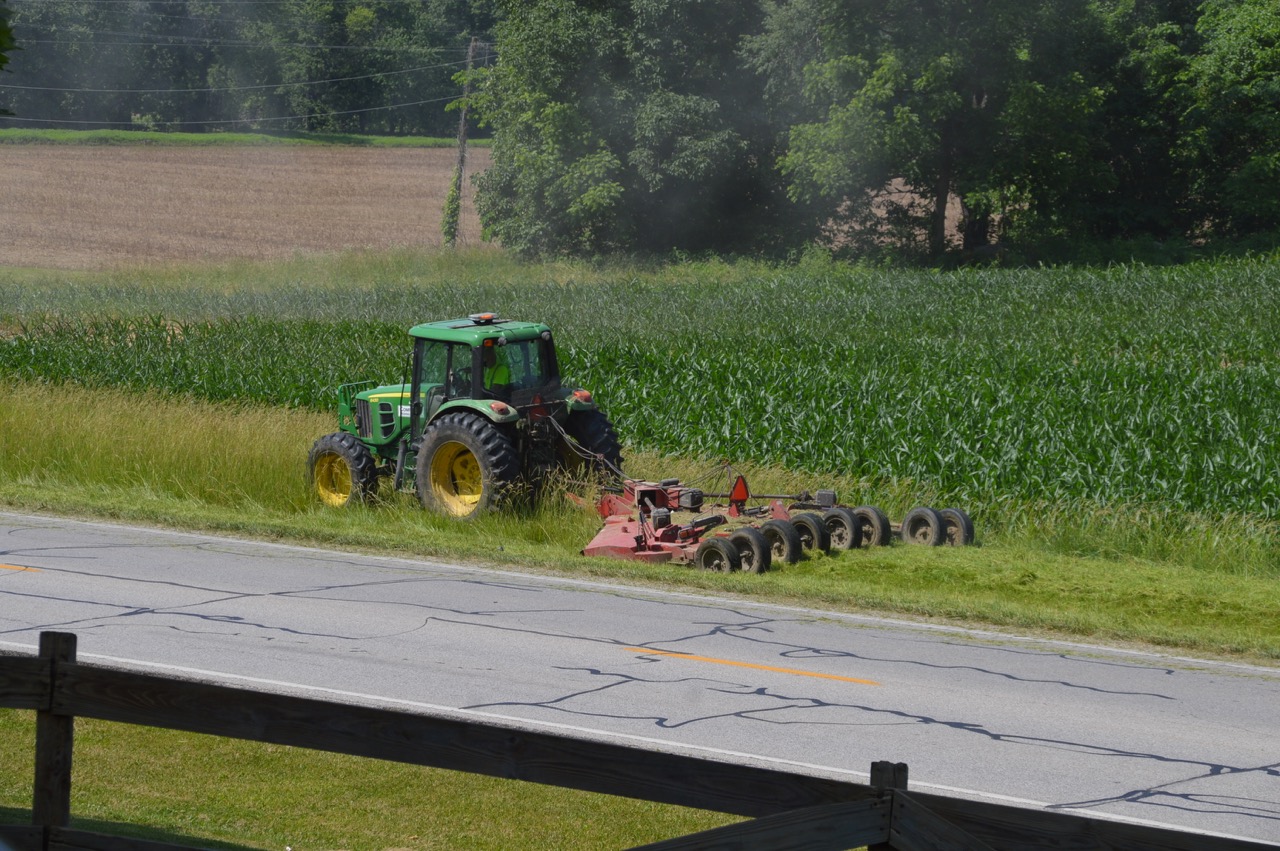 The other person that was mowing yesterday and today, is my new neighbor. He moved in the past few days and comes with an interesting story. Before I relay that info, he has mowed the large yard back as low as the ground, looking like a brown fairway on a Midwestern golf course in August. I like it lower but it will need some rain to look good again.

When I saw the U-Haul truck on Thursday I stopped by on my way back from the early morning trip to the hardware store, to introduce myself and see if he needed any help. I'll not go into detail of our conversation but hit the main points that you might find interesting ... and gives me reason to believe maybe I am living in a pretty nice place that I have taken for granted after all these years.

From his new Ford F-150 to all the toys he brought with him ... it looks like oil jobs are still paying good income.  LOL

So far the hounds have stood and looked in that direction since they are seeing activity next door for the first time in 3 years. I'll have to keep an close eye on Stella because she looks as if she could take off running after that ATV, as if she and an ATV has some sort of past.

You'll notice some new blogs added to the sidebar later. They are the blogs and websites I found late last night that led me to Pinterest and signing up for a account. I'll use that site for collecting info but I have no plans of posting photos of my hounds there.

With the thermometer heading for 88° again today, the AC will kick on automatically. It was turned on for the first time of the year yesterday. Whenever I notice the hounds panting inside with the windows open that's a sign it's time to batten down the hatches on turn on the AC full-time.

Heidi is going to get a bath today and will enjoy the cool water rinse after that warm warm washes the shampoo off.

I cannot get over this fantastic weather here in 'the tropics' of Southern Indiana.
at June 04, 2017
Email ThisBlogThis!Share to TwitterShare to FacebookShare to Pinterest
Labels: Indiana Summers, Stella's Freedom, Sunday Morning Walk