Time Flies When You're Having Fun 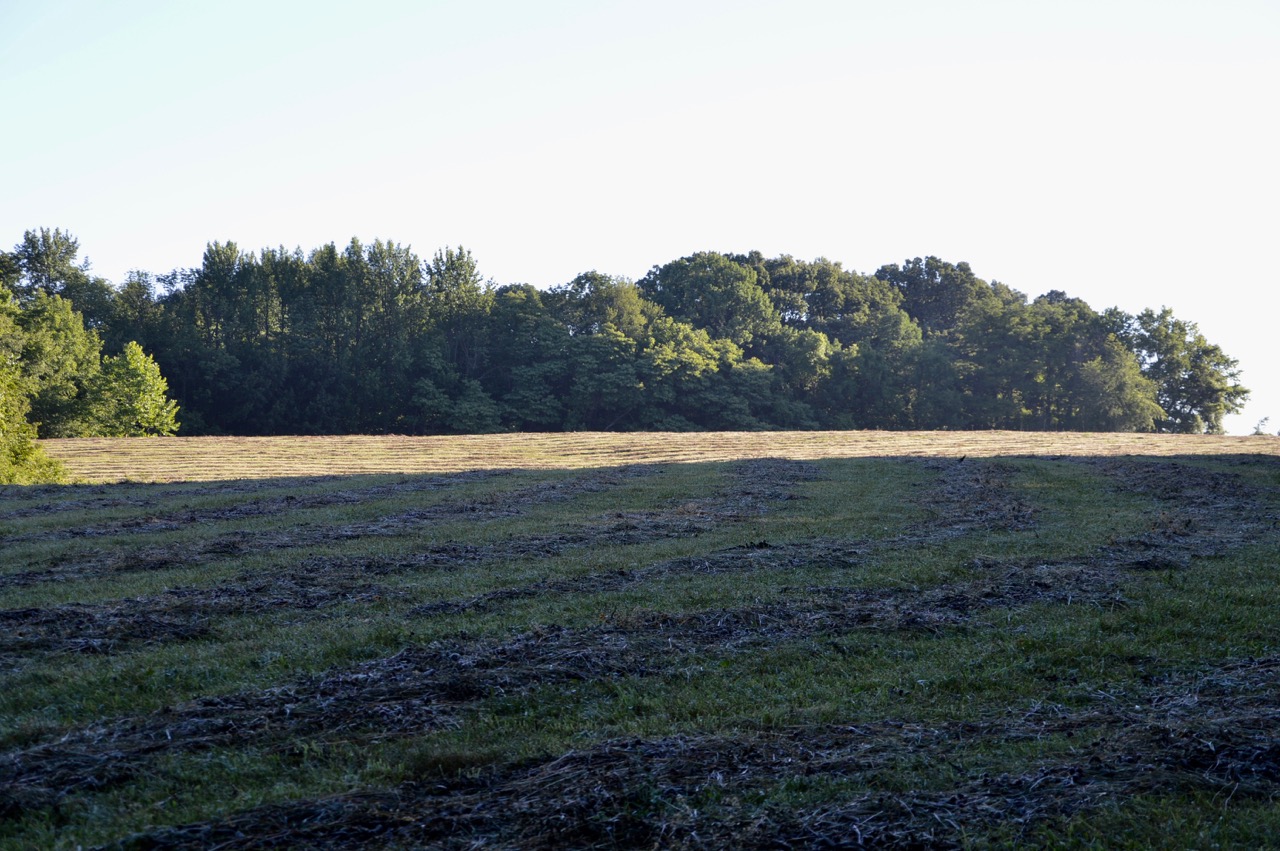 We were out soon after 8am. I would have been drenched with water/dew if the field had not been cut. I still feel small droplets of water coming off my hiking boots with each step. Cool enough to wear a sweatshirt ... but the hounds were "noses to the ground". 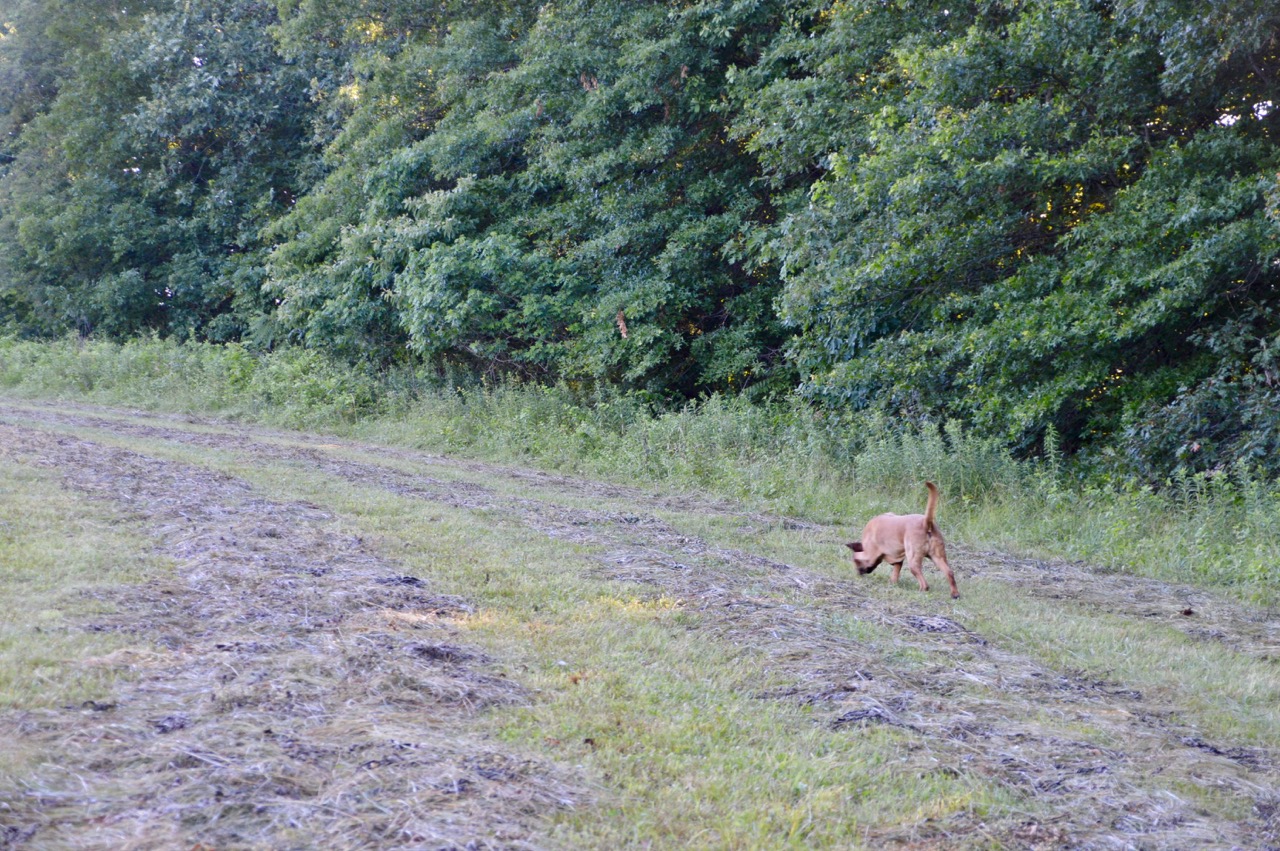 While Sadie started chasing swallows almost immediately, Stella was more interested in finding supplements to her diet with hopes I wouldn't catch her soon enough. The word "no" was used a lot this morning for both hounds and each time their findings were dropped to the ground. 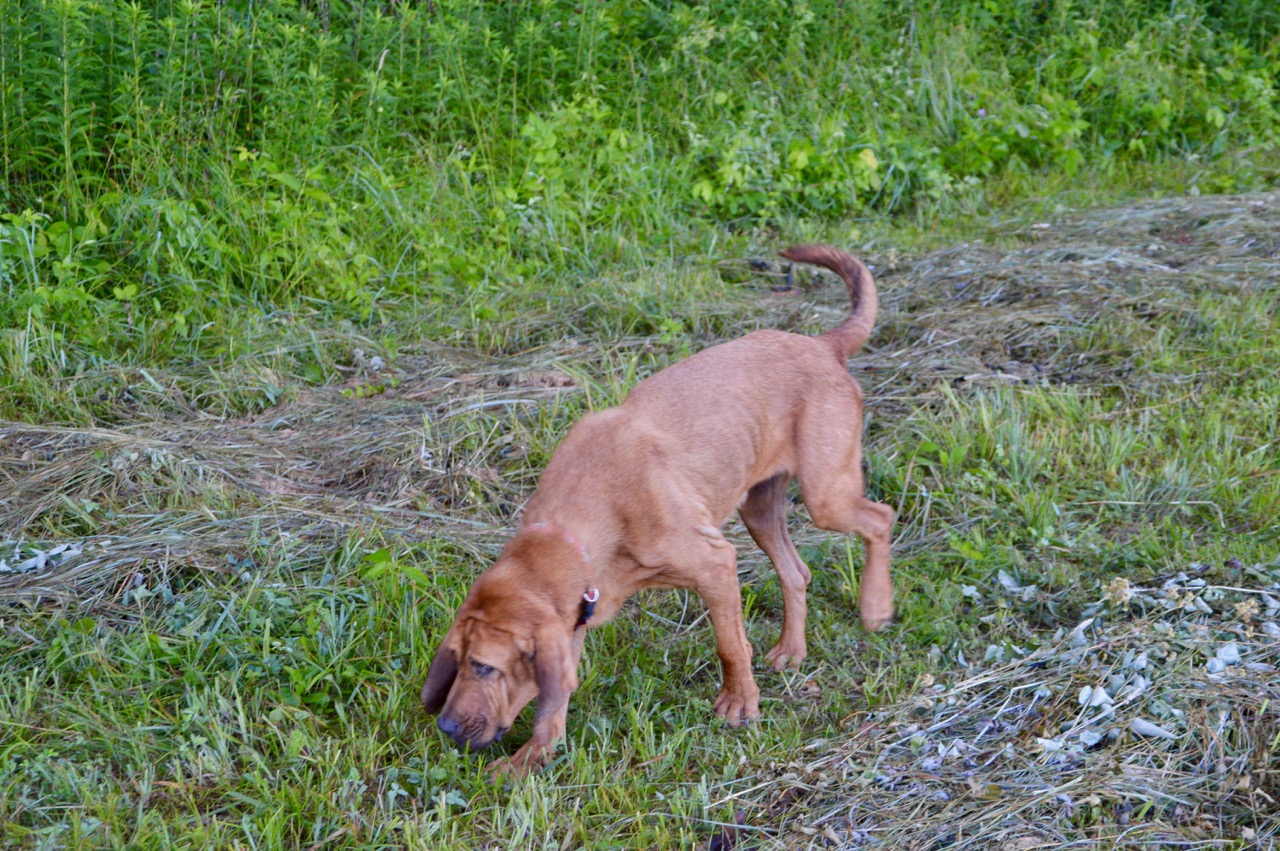 That didn't mean they couldn't exercise their noses. There was plenty of time and plenty of field to do that. We walked a little further today along the back side to keep everyone within the cut path so we would not mess up the piled rows that they will rake later before baling. 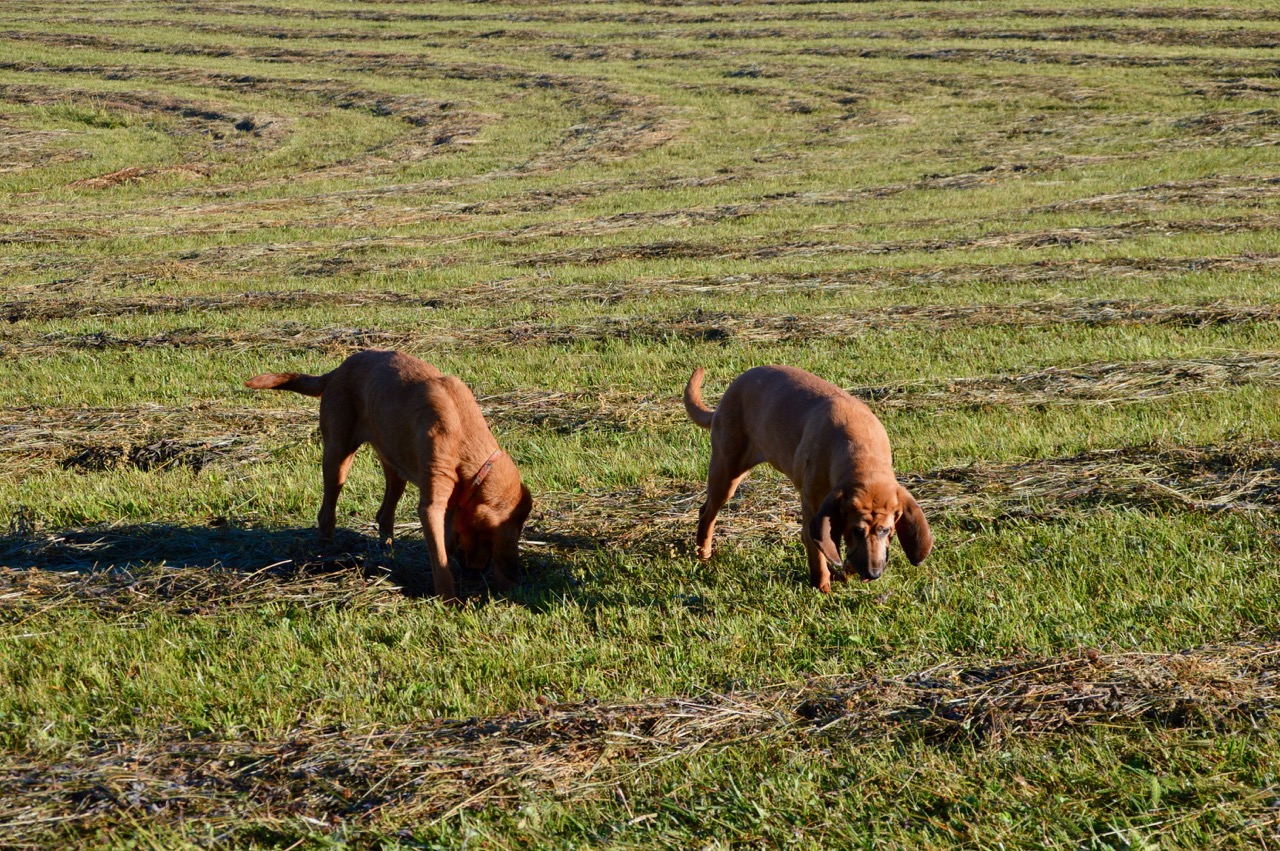 With the yard mowed yesterday and the forecasted rain blowing out for another few days replaced by sunshine today I wasn't sure what plans I had for today. It looked like the chances of rain were slim for this afternoon but very good later tonight after midnight. 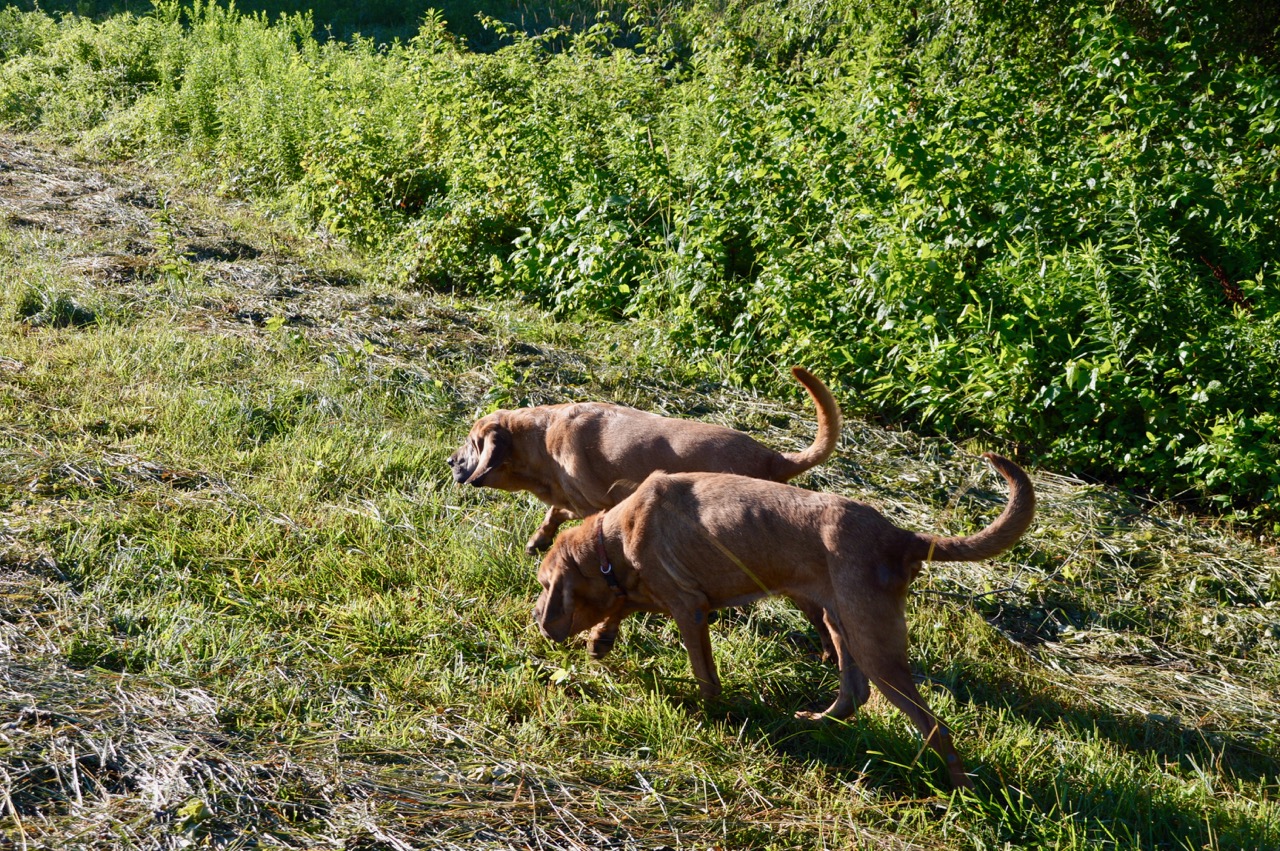 I had a lot more weeds to cut along the driveway bank. I did that until my battery ran out of juice. I did take the Z4 out for another drive of about 50 miles. 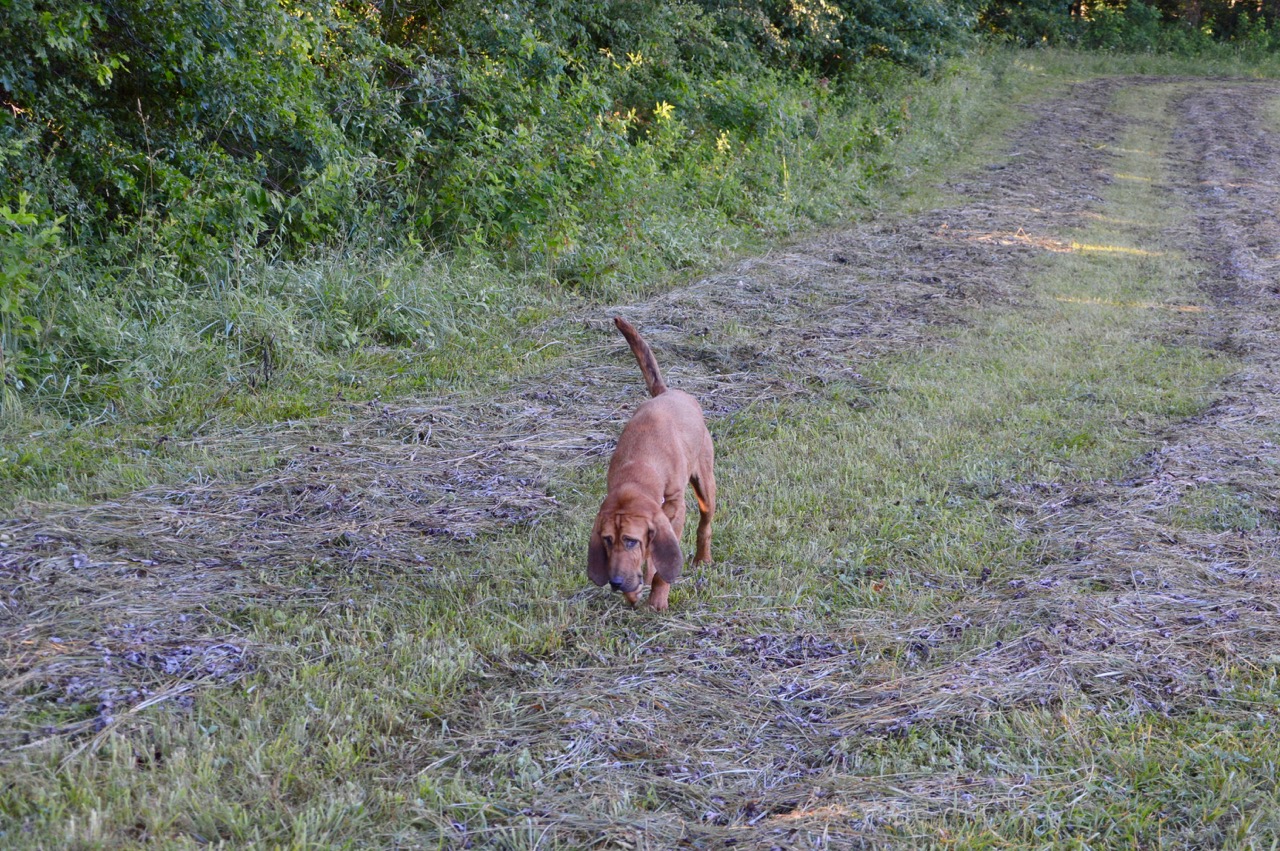 This morning we walked by the electrical tower to the woods on the north side. Here is a picture from an angle never seen before. I am standing at the far NE corner of the field, the tall tower would be to the left. Looking back toward the house you can see just how much incline there is to the middle of the field. 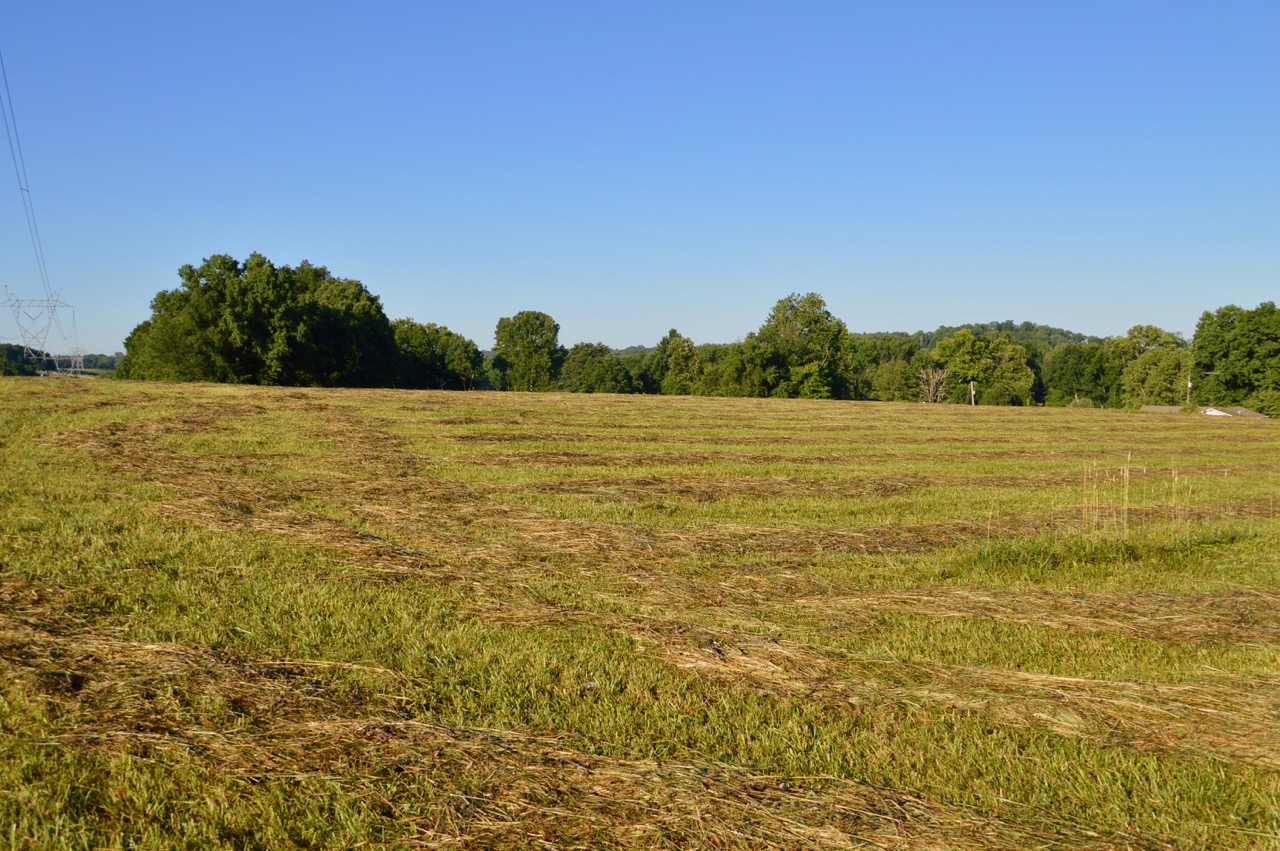 I look for them to rake and start baling late this afternoon. Once that is done that will put us back on our regular path which can be seen since it's a darker green. 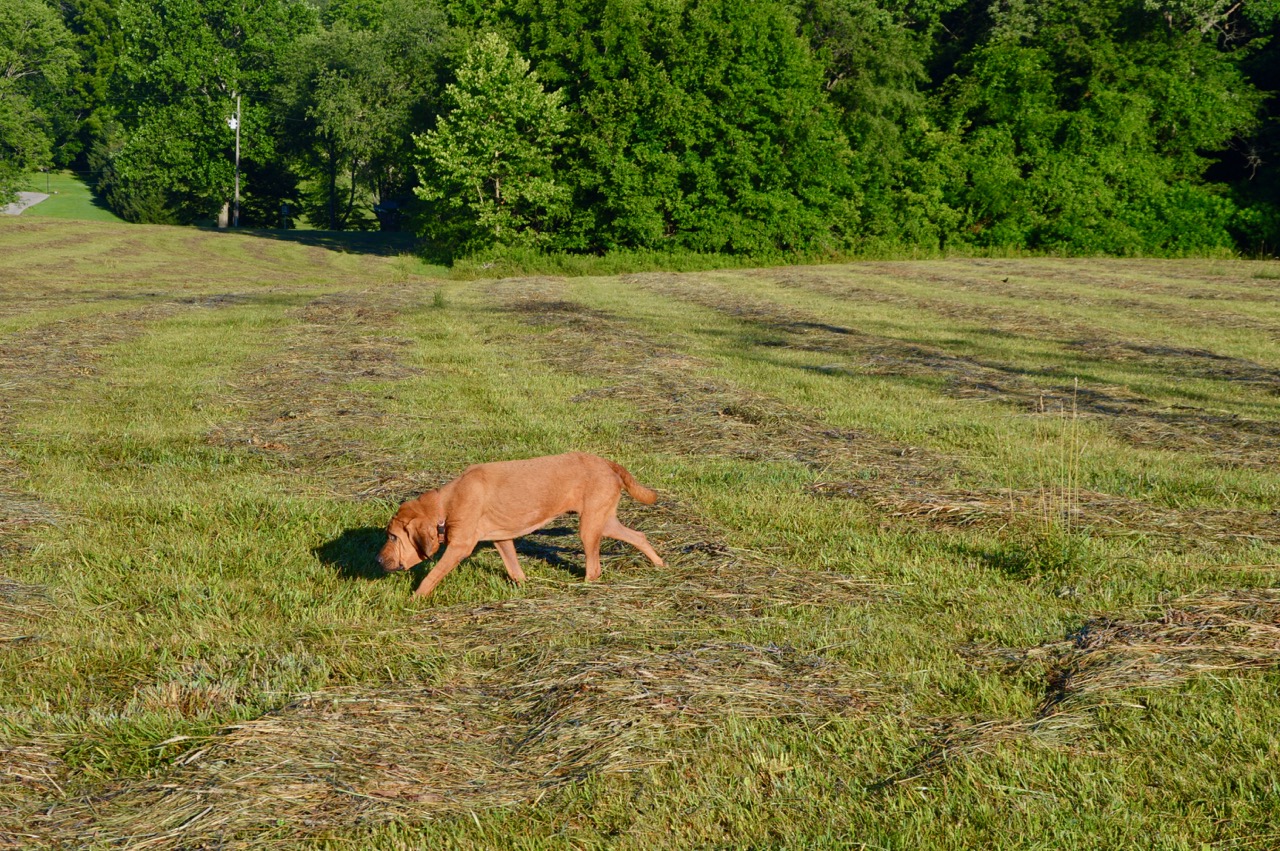 It is funny how excited they get when we get ready to head out for these two or three walks per day because when they get back home, all of them are in a deep sleep with ten minutes. 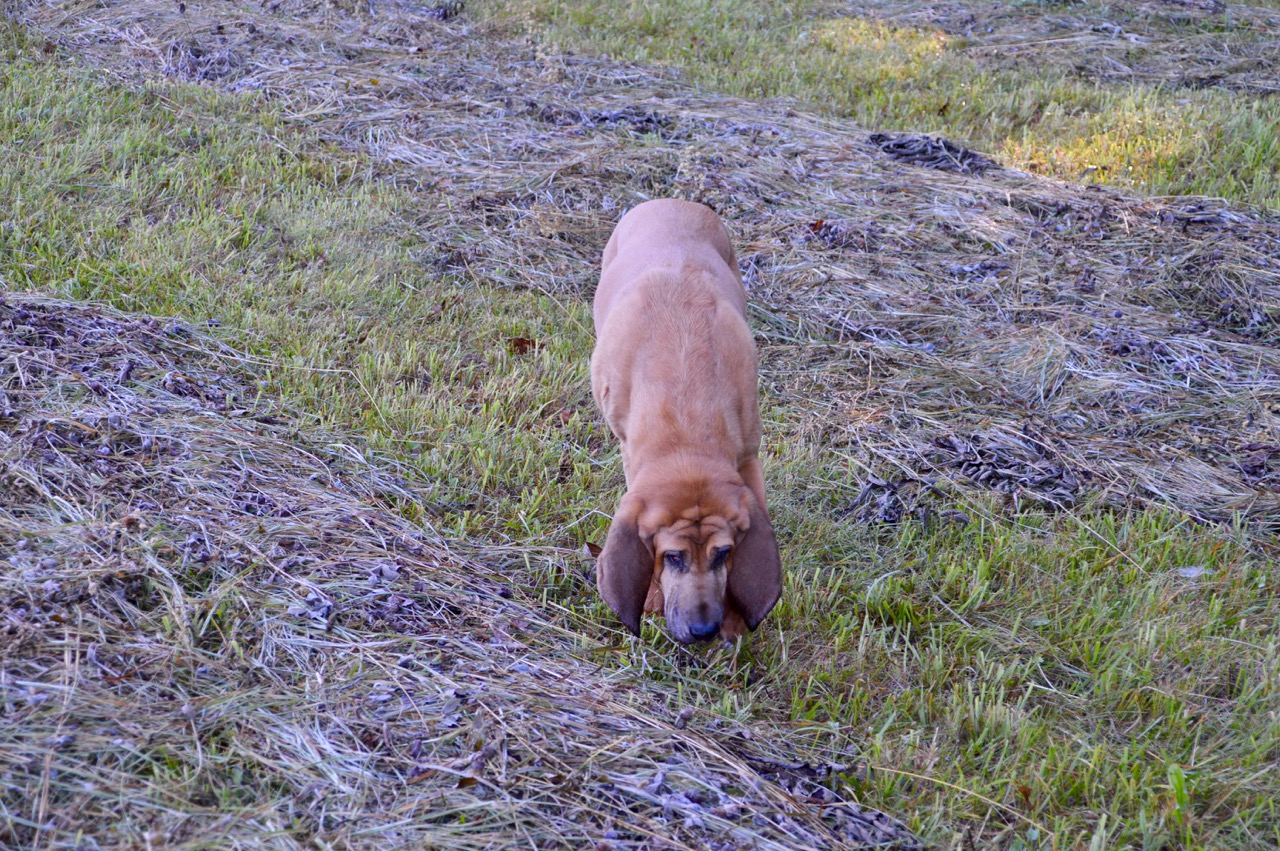 Today wasn't much different than yesterday afternoon, except less sporting events to watch. So I spent most of the day outside reading a couple of books. There were no bugs or gnats to bother me, Sadie and Stella enjoyed roaming the field even after two hound walk. 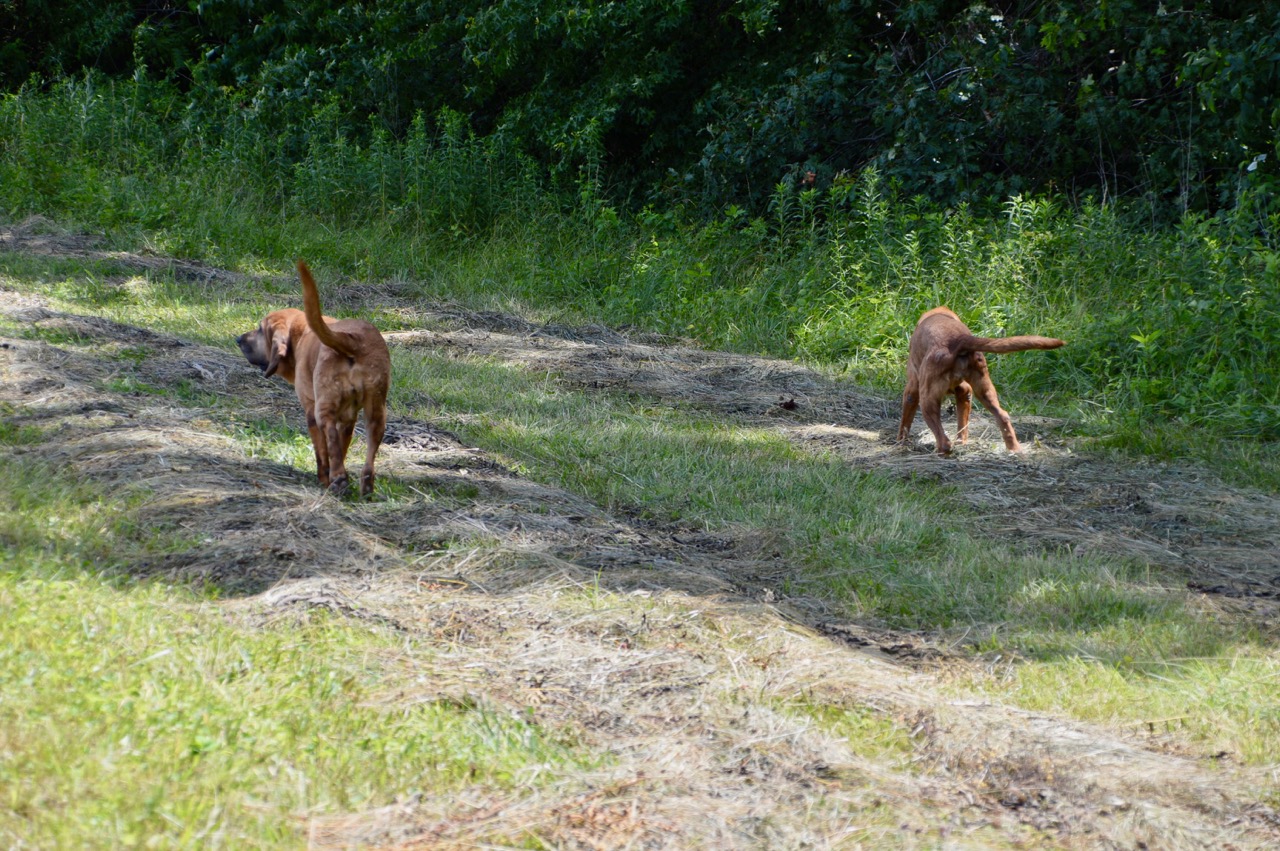 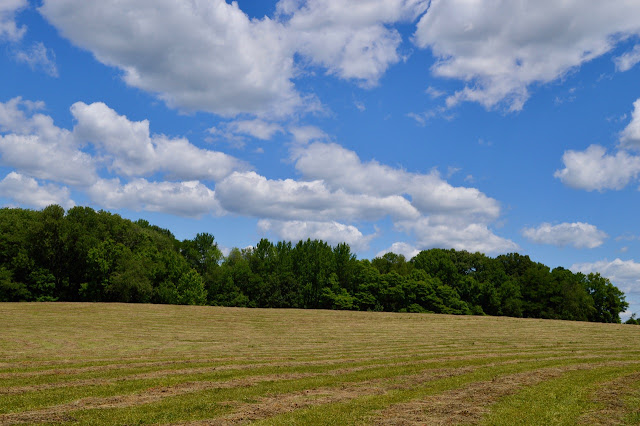 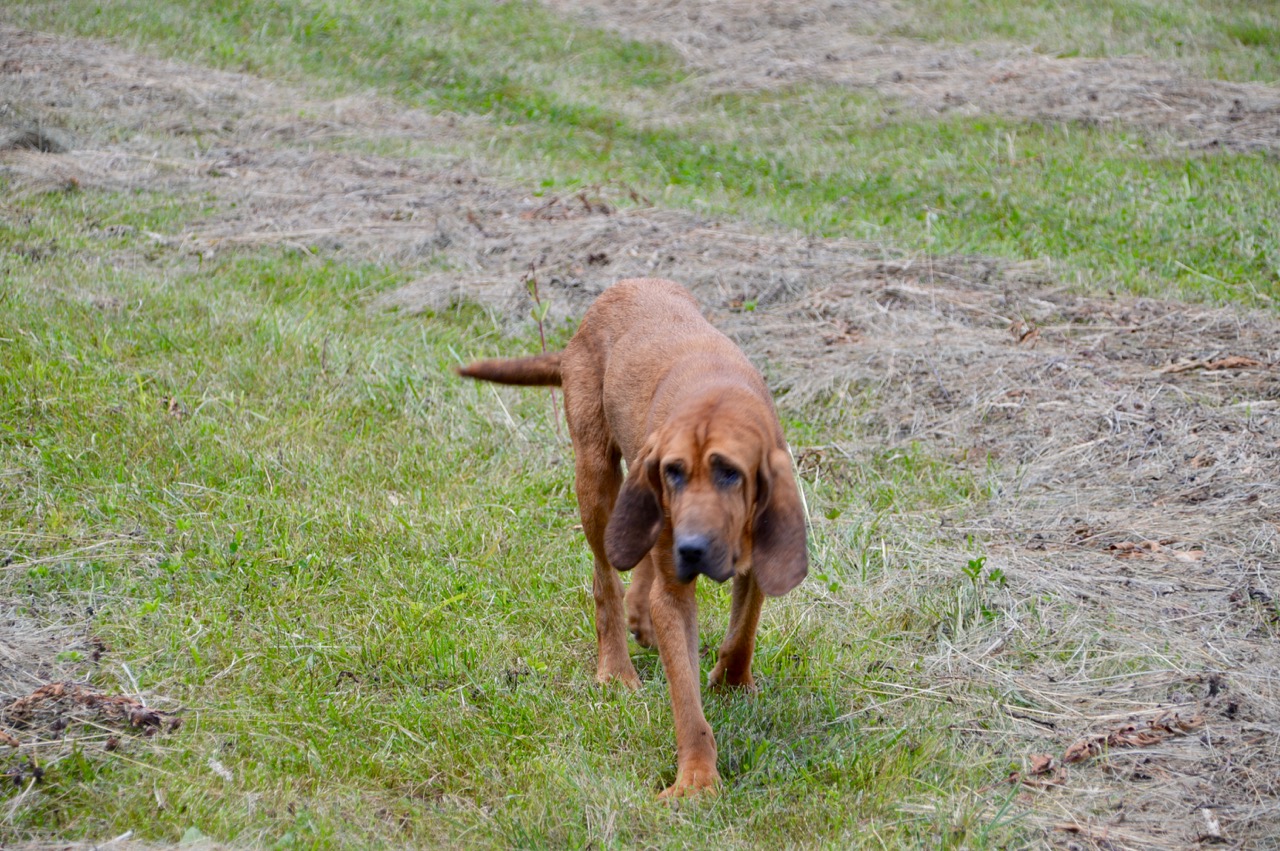 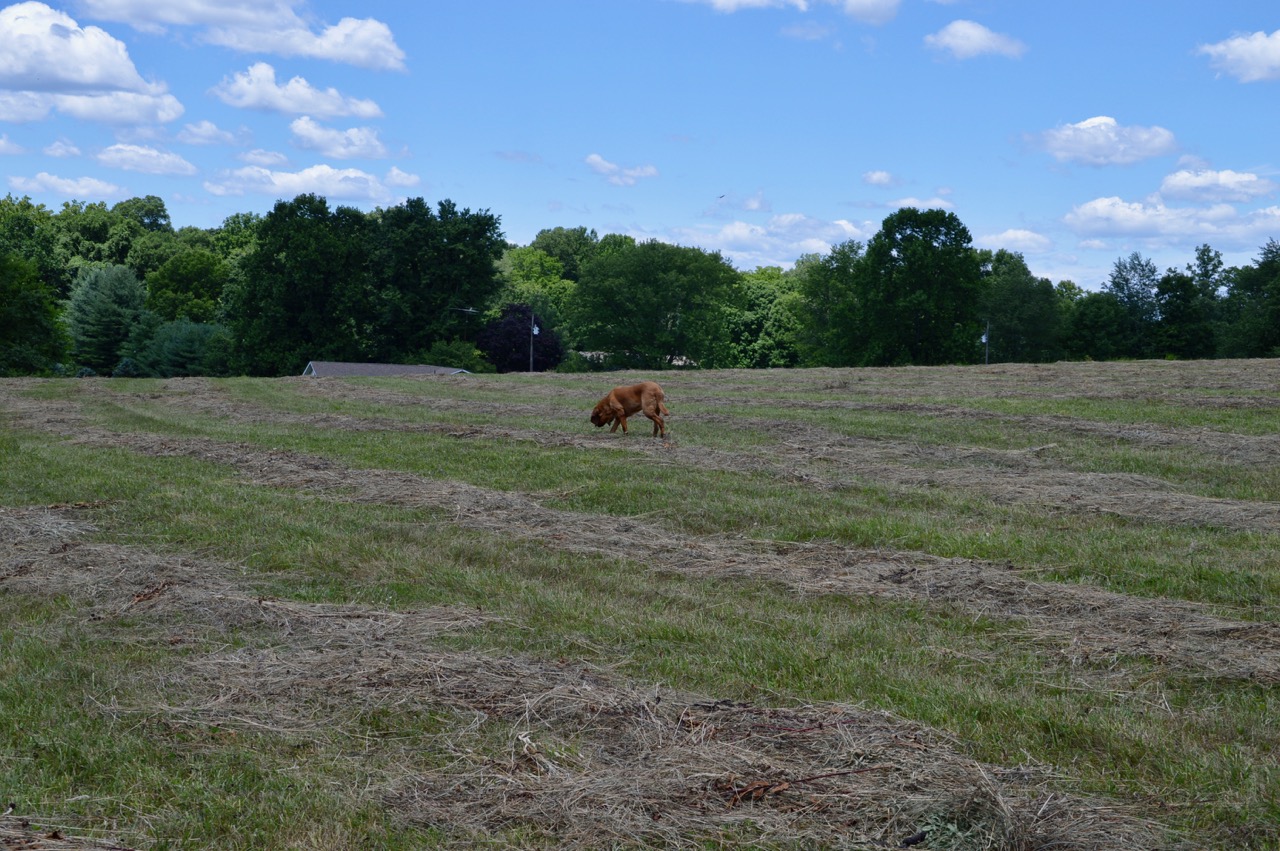 I thought the way Heidi jumped off the couch that she was going on with noon walk with us. She was only needing a place to lay outside under the sunshine while Sadie, Stella and I took our walk. 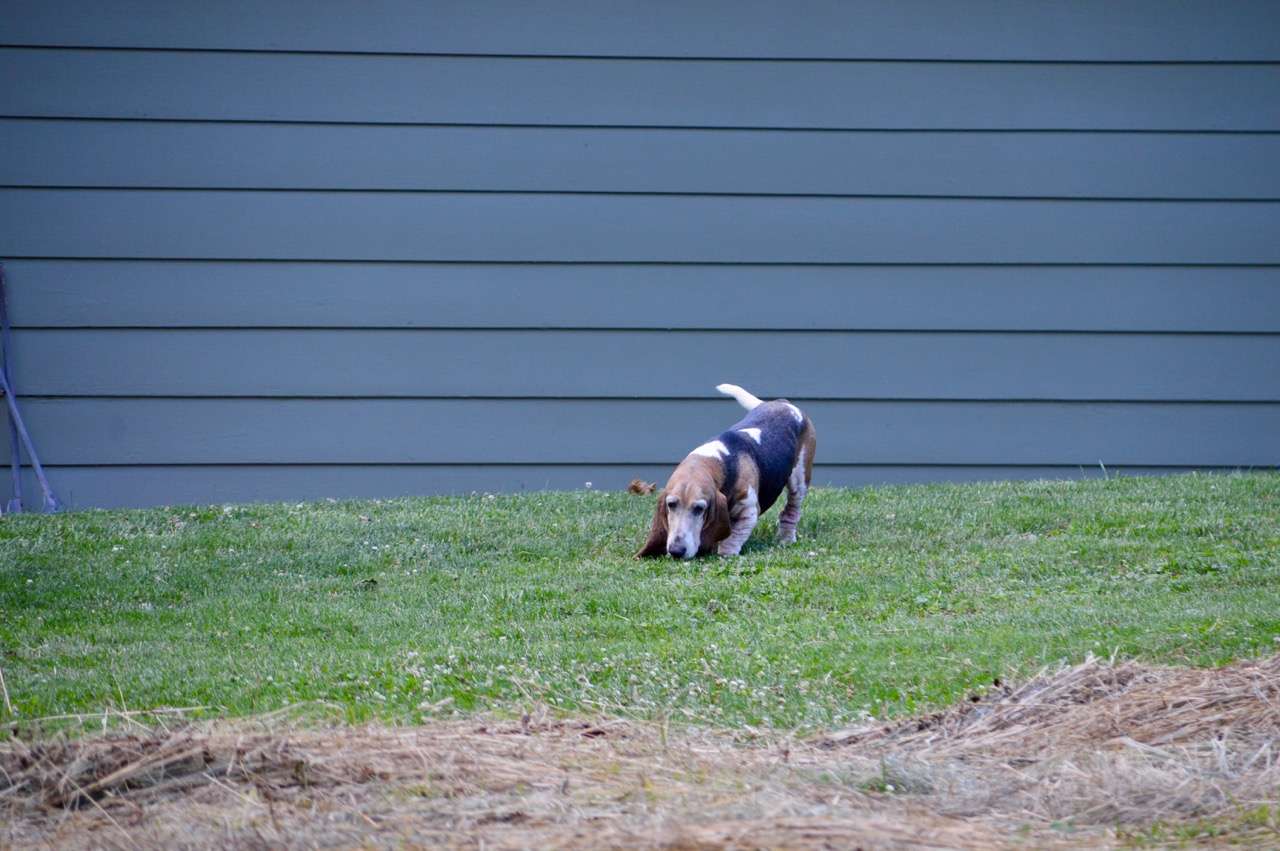 With all of them outside it was time to cut their nails and brush them. All three of them were very cooperative in the nail trimming expedition so they were awarded peanut flavored bone treats afterwards.

I remember how nice it was to walk around 8:15pm last night so we are going to wait until then for our 3rd walk of the day.

I found out a couple of things concerning my 2012 Mini Cooper S Countryman and the slowness I had with Google Chrome. I always suspected a previous owner had added those red stripes, stock design, to make it look like the model above what it actually was. If you remember I took all of the red striping on the car off in March. 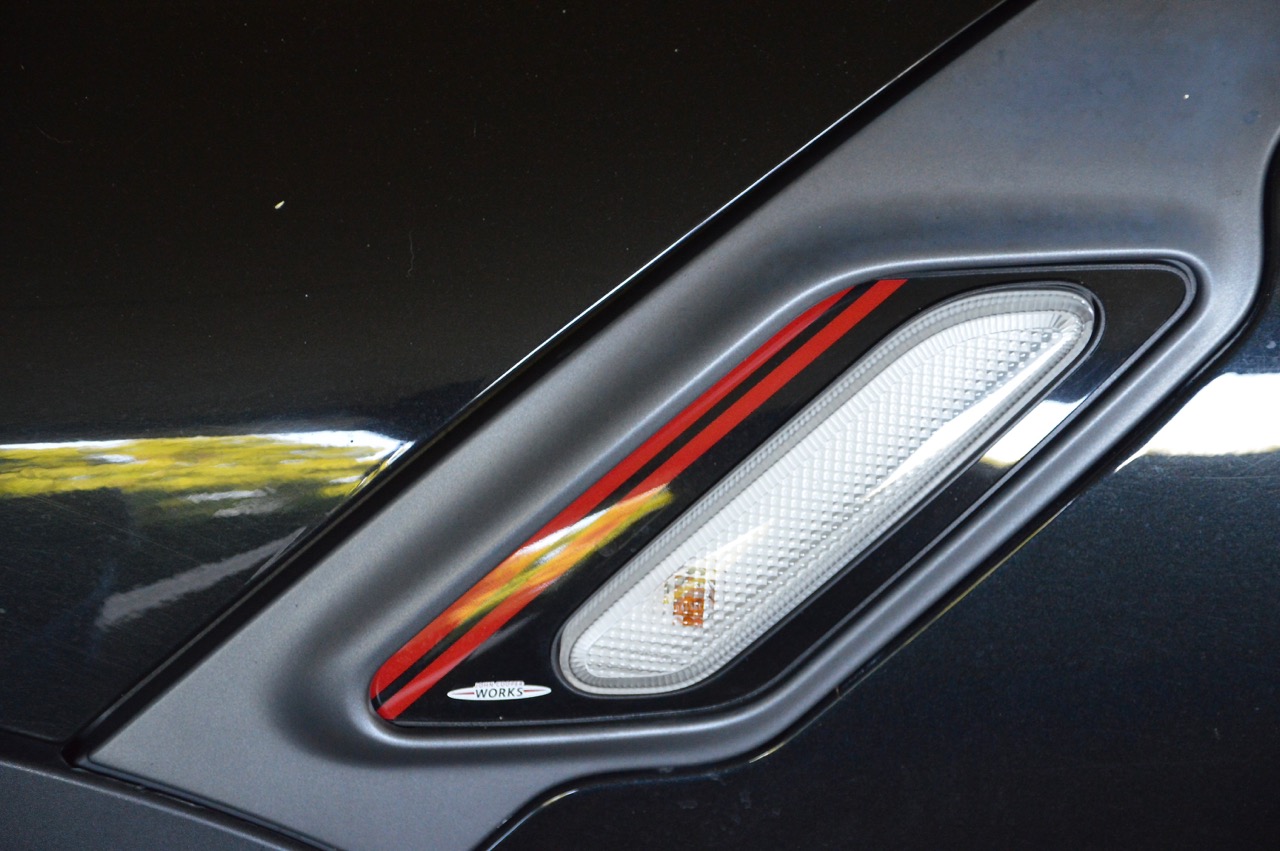 These side panels were a dead giveaway because of the "John Cooper Works" side panel, plus the front bumper and by a couple of other features I knew that this was not a John Cooper Works model. That would make it sportier, a little more horsepower and worth more.

Did they change out these side panels, add red mirrors and the red inlets in the front grill and the stock red stripes to make more on the trade-in value or just because they wanted that model? 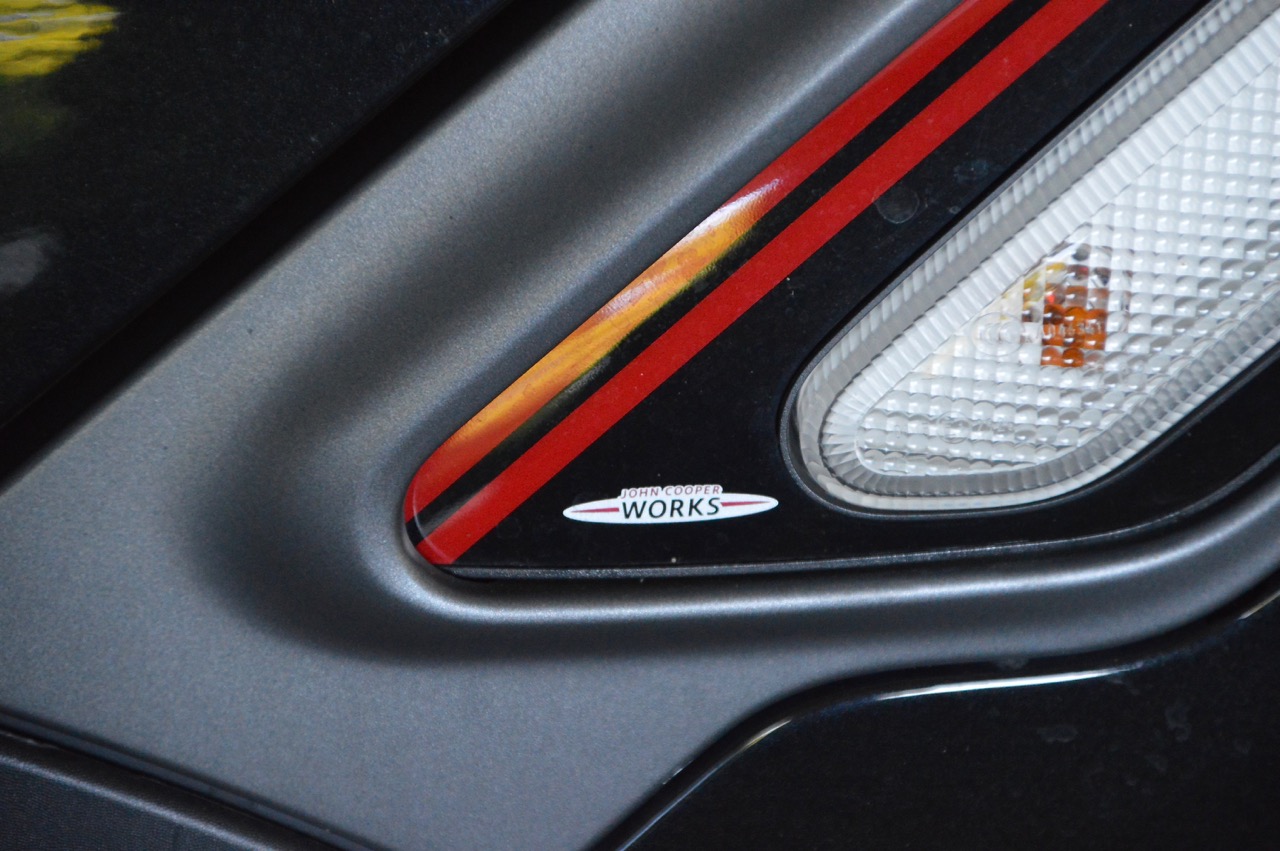 I found out the true specs of the car last night as I was curious enough to find a decoder that could break down the VIN in detail. In that description it stated the car came with black mirrors ("outside mirrors same color as car") and the HP was for the Sport model that I have, not the John Cooper Works model.

I was also suspicious at times when I looked in Google Images for my car and I could not find the model with the stock red stripes with a black roof. That model of car always had a red roof, along with red mirrors and red grill intakes.

I am going to buy the stock side panels for the "S" model that I have and still try to find some black mirrors to replace the red ones, taking the car back to it's stock description. Those black mirrors are hard to find, even used ones for sale.

I mentioned the other day I was having problems with Google Chrome when using blogger. I tried something this morning because the only recent change I had made was adding the "Pocket" app. That gives you the ability to save a website into Pocket so you can read it offline. It's a great feature for those using laptops yet is a standard option with the Safari browser.

It was a pretty quiet day in retirement here in 'the tropics' of Southern Indiana.
at June 26, 2017
Email ThisBlogThis!Share to TwitterShare to FacebookShare to Pinterest
Labels: 2012 Mini Cooper S Countryman, Google Chrome, Hay Field