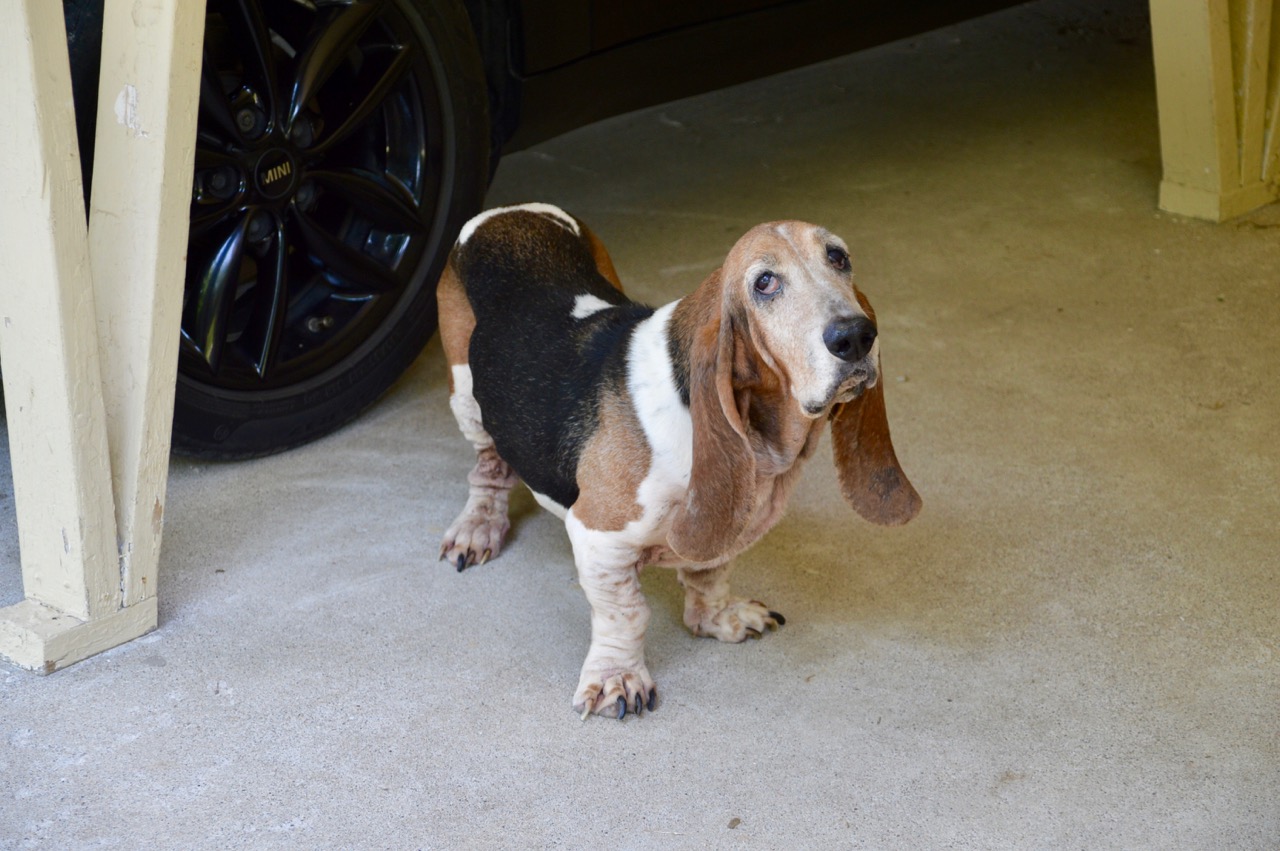 It was quite a day today and not the typical Monday. About the time I thought the day was over and the excitement gone, a certain visitor highlighted this typical hot summer day in 'the tropics'. Heidi let me know I still had painting to finish inside the carport. 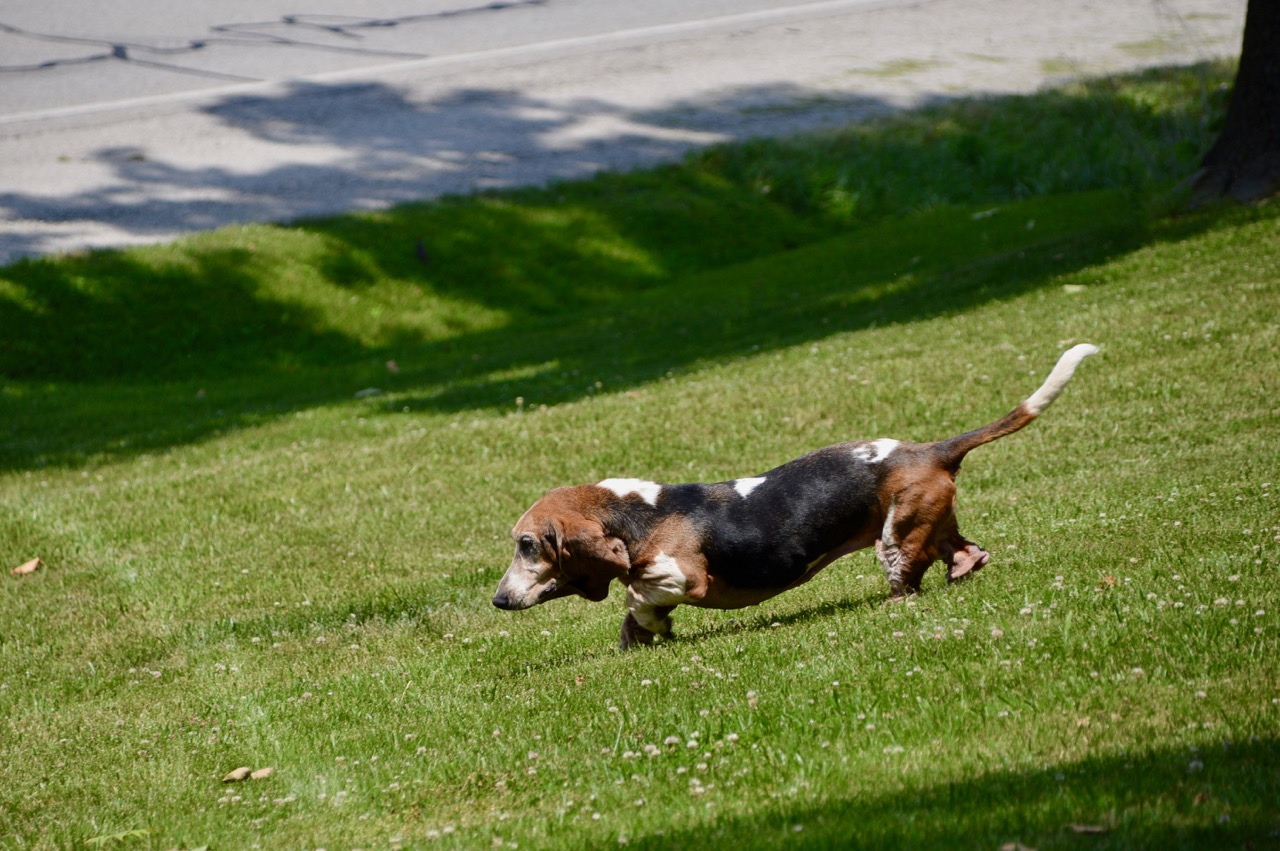 All of us love hot weather when it gets here. Heidi likes it so much that she will dump tanks after lunch, sprint from the middle of the front yard to the driveway, then slowly inspect the driveway for any strange scent she can identify. 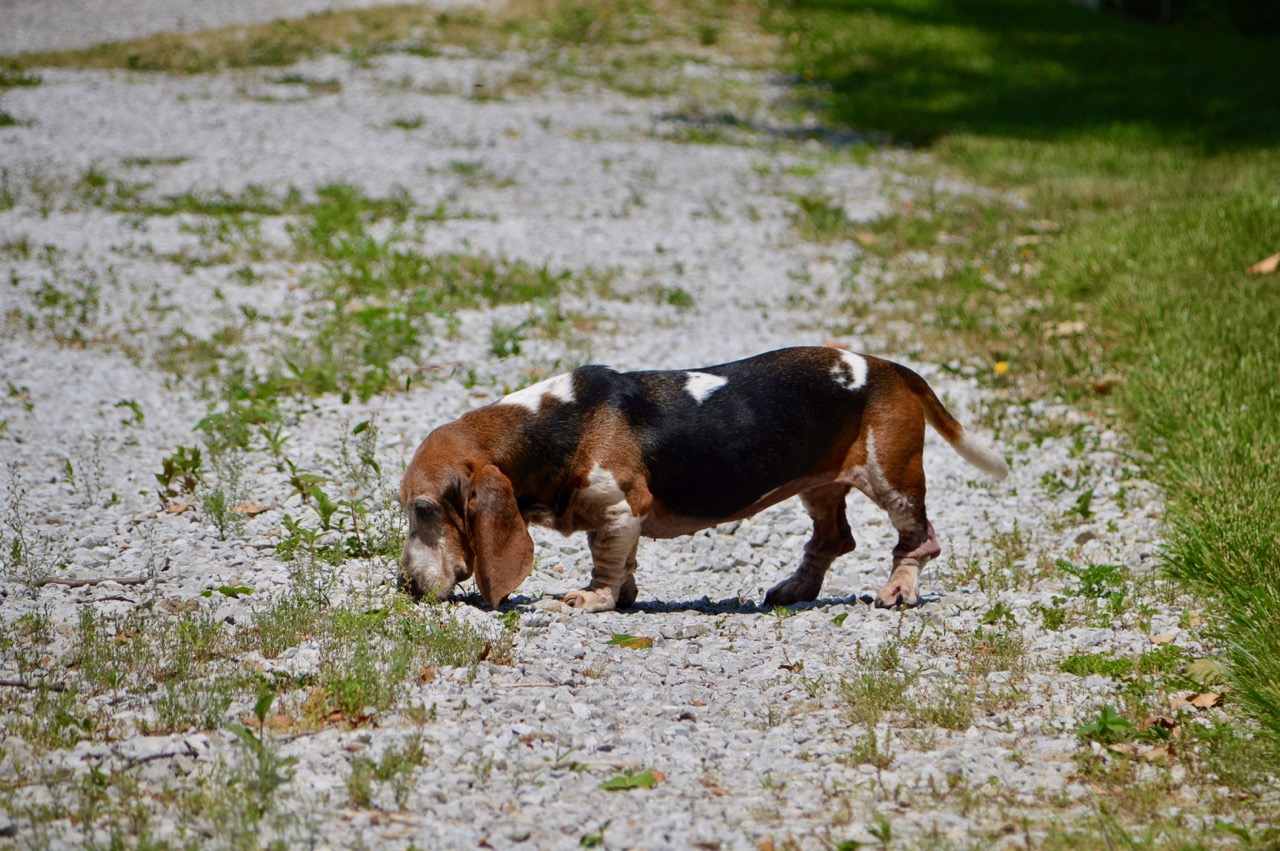 In the 6 years I've had her I have never seen her sprint up the drive nor even trot up the driveway but she arrives back at the door eventually. She looks very good for this time of year, when the pollen is out in full force for those with allergies. 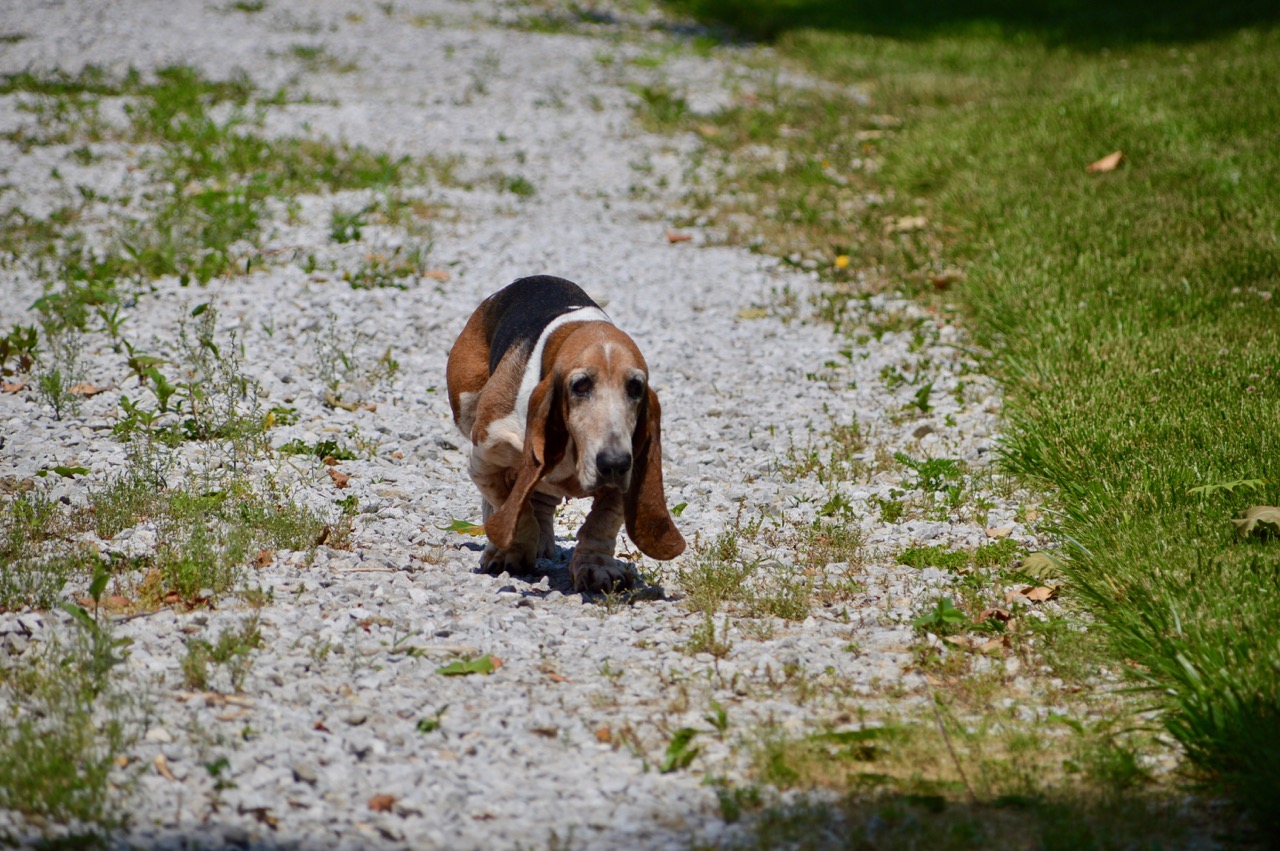 The morning walk went fine, Stella was on her own and caused no problems, in fact she kept up with Sadie for most of the walk and then followed behind me the last 1/4 of the way.
We were loading up the Mini Cooper for a trip to the vet. We were checking her weight since her last vet trip on April 21st and she was going to get a blood test to see if her organs are working properly and if her stats were good internally. 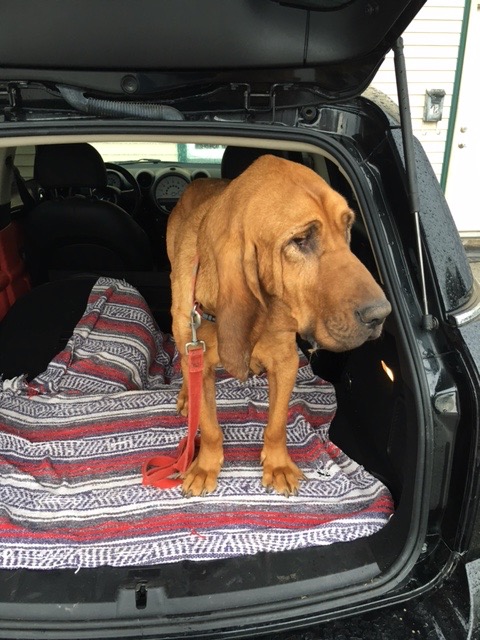 Her good news ... she has gained 5.4 pounds !!! The BEST news is that her blood work came back clean and everything is working as it should internally.
As we walked out to the car, just as I closed the door I realized I did not have my car keys with me, therefore I did not have my house key. I have not made a 2nd spare key to keep outside for times like these because that spare key that came with the new door knob is on my Z4 key ring.
I had locked us out of the house with no spare key. The car keys were inside.
The excitement didn't end there. After some clear thinking I was able to 'break into' my house without any damage. All the windows were closed due to the AC running, so they were not an option. But ... as I pulled out of the driveway onto the highway my warning light for the rear door came on.
I was certain I heard it latch, it did not look open from the outside and then I realized what I had done. I stopped as soon as I could in a parking lot to check it out. When the keyfob would not unlock the back door, or even click I knew the Mexican blanket I had put in for Stella to lay on was either under the door or in the latch. I found out at the vet, the blanket had moved over the latch when the door closed. Once I pulled it out, the rear door worked perfectly.
With the temps near 90°, all of us spent the afternoon inside enjoying the AC. It ice tea for me, water and naps for the hounds ... around 5:30pm Sadie was at my desk giving me her stare for "I want to go on a walk", even though it was 89°. Looking a few hours in the future it was going to only drop 2° so I thought we would give it a try.
All three of us walked right by, right over our late afternoon visitor ... a snake. 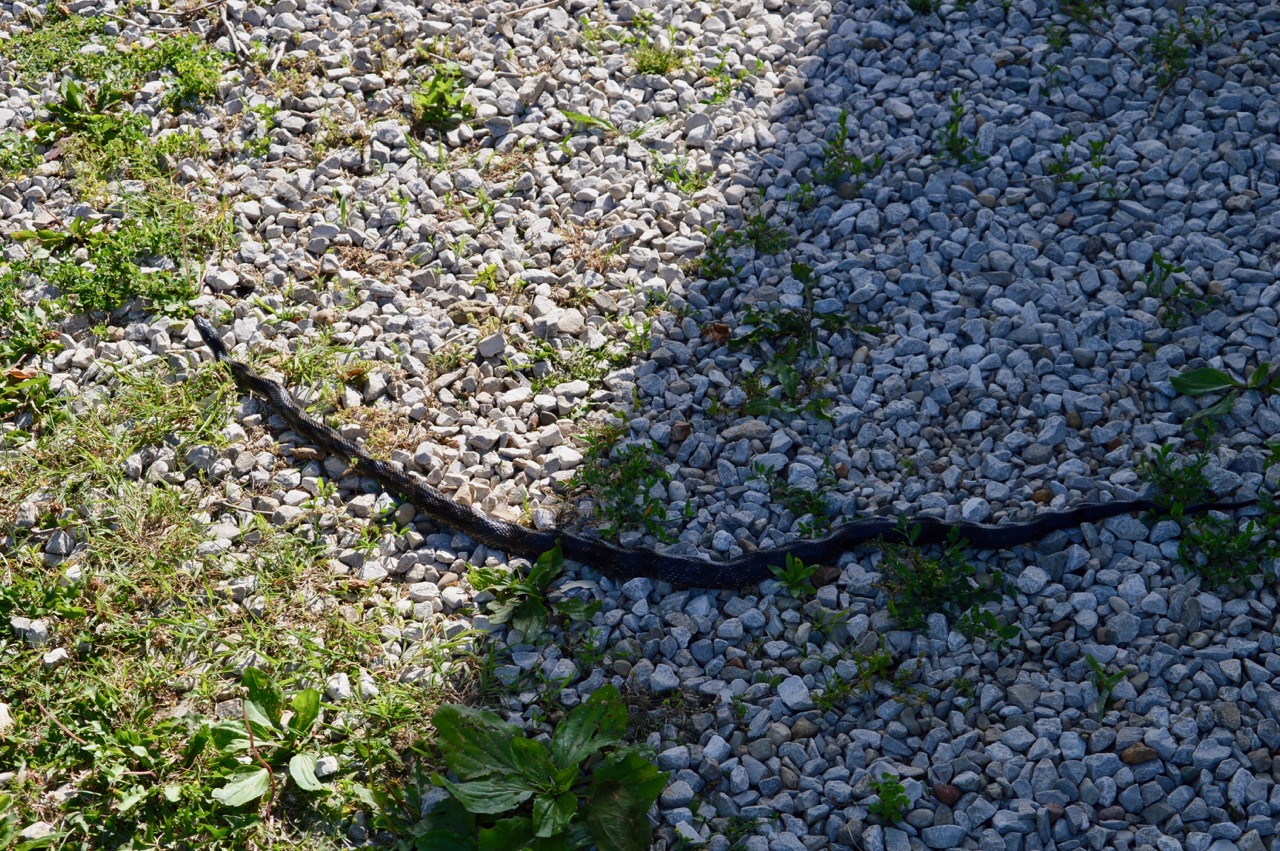 Sadie and Stella never stopped and headed straight into the field. For some reason I stopped to take a look what I just walked by and at first I thought it was a strange piece of wood that shows up out of nowhere. After a closer look I see that the snake is just as curious about who interrupted his nap. 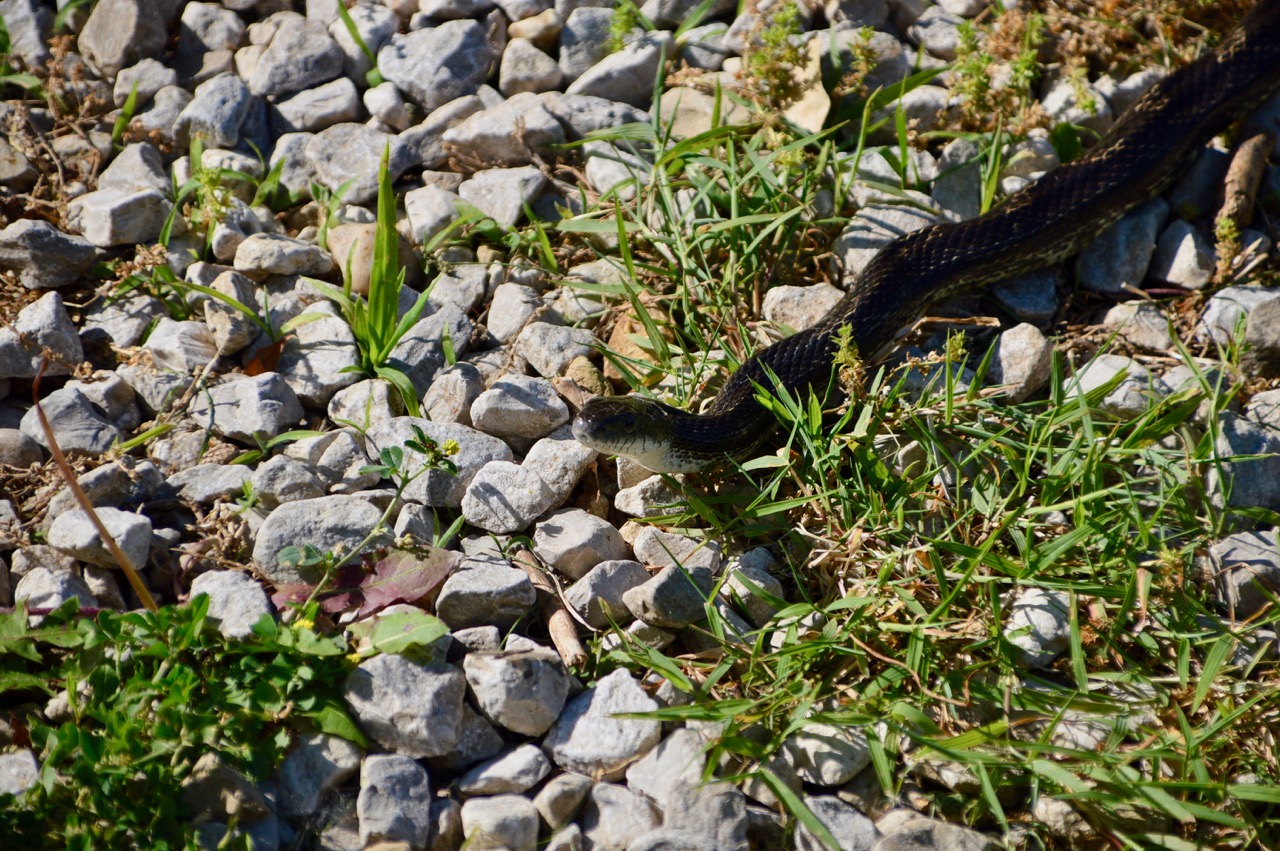 It was 6" to the right of "Winston's Patio" red blocks. I figured that by the time we got back (hopefully) that the snake would leave and find another place to sun himself. That is the first snake I've seen in a lot of years around the house. 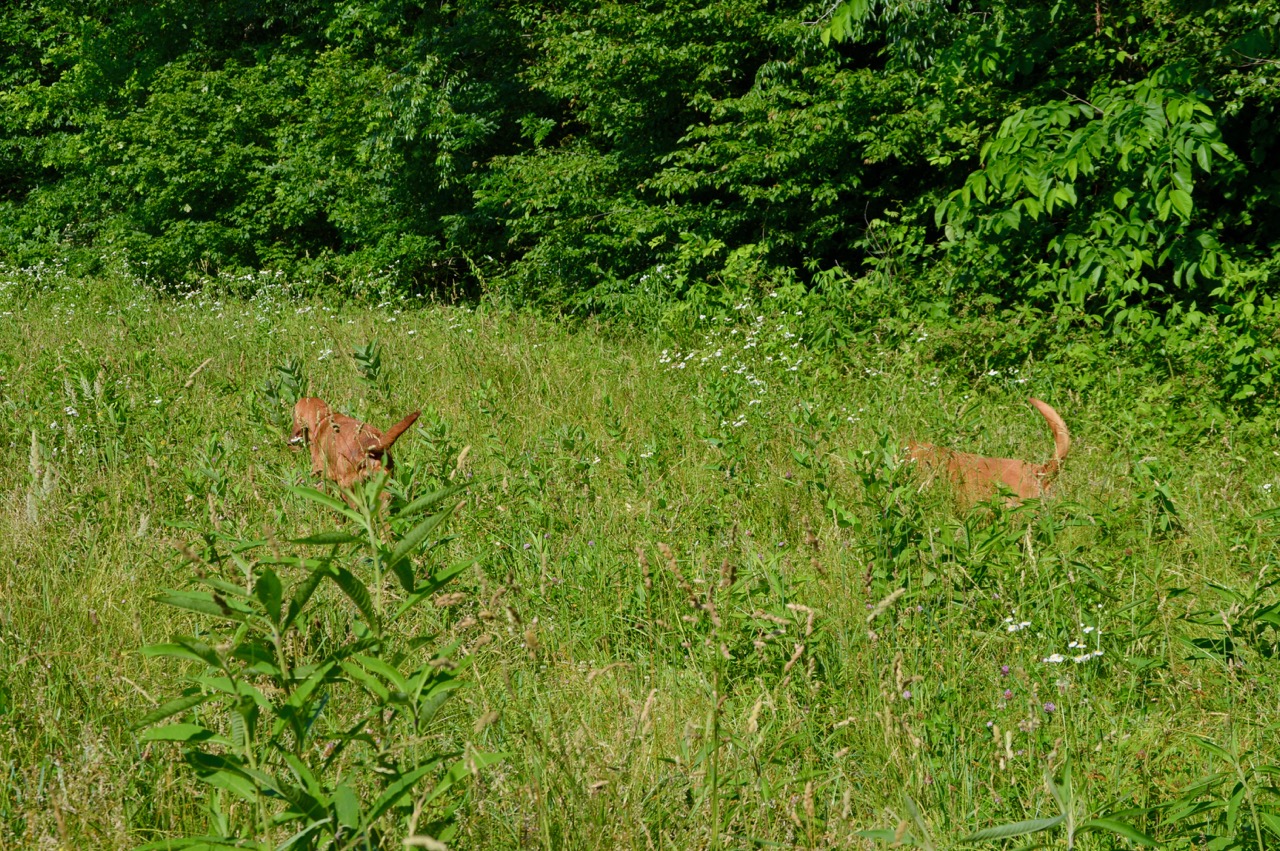 Right after we got back from our morning walk around 9am, a truck pulling a trailer of equipment was parked on the side of the highway blocking my driveway. I thought they were having some mechanical problems but soon they were offloading their equipment.

I thought it was equipment that was used for ditch digging by the DOT. Maybe they would be digging a new drainage ditch in the field next to my property that would lead into my culvert.

I was wrong ... more trucks and more equipment were heading up the driveway of my neighbors house. Of course, I had to go over and check out what the plan was gong to be.

She told me the three beautiful soft Maple trees, transplanted from the 'homestead' when her husband's dad built the house in 1955, were being trimmed. She claimed they were tired of picking up all of the sticks that the storms would blow down and a couple of the trees had possible rotting tree limbs.

Not until I was on the hound walk did I see how ugly the trimming job turned out to be. When I walked over this morning, there were 3 full green maple trees just like the one pictured. 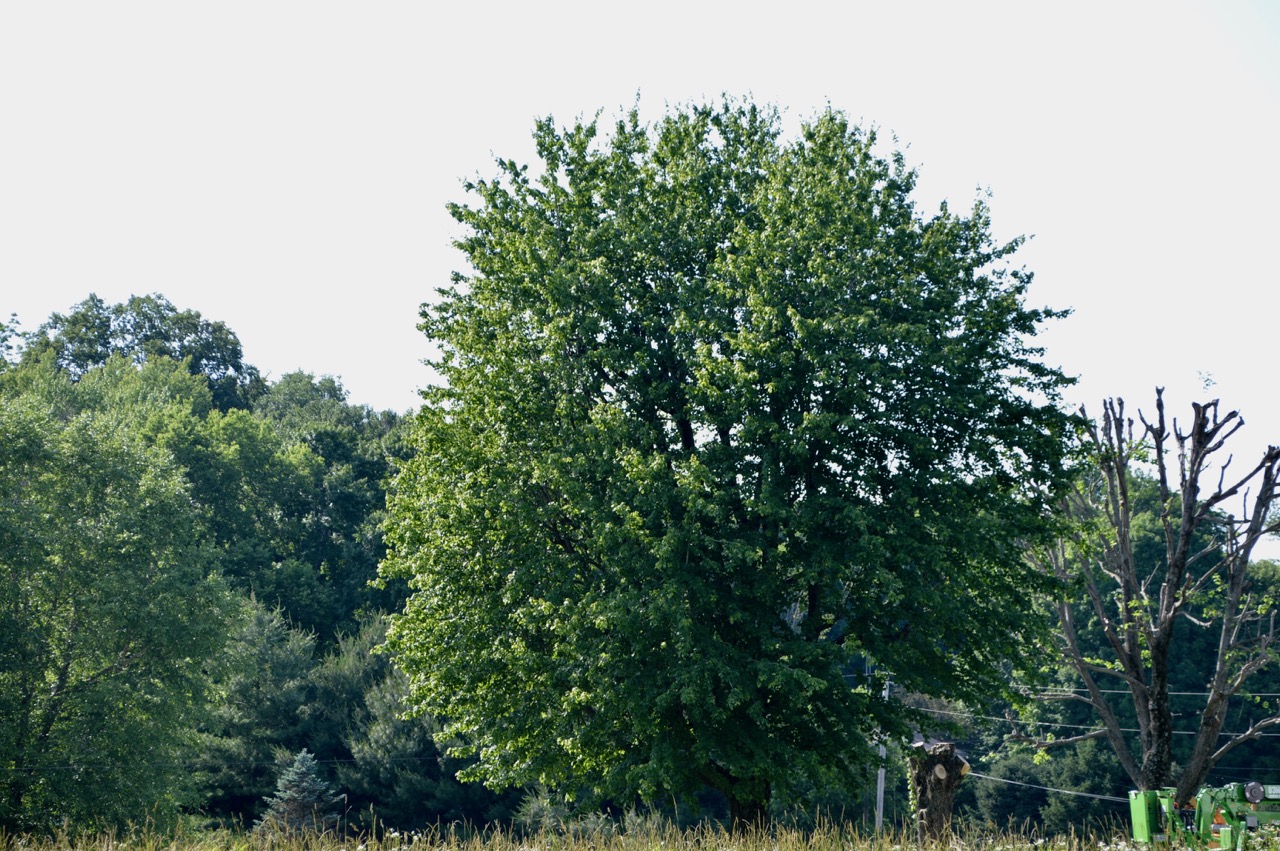 By the end of the day the middle tree had been cut completely down, while the one on the right was trimmed down to nothing. I realize it's a necessity at times but I always hate to see beautiful trees end up like this. 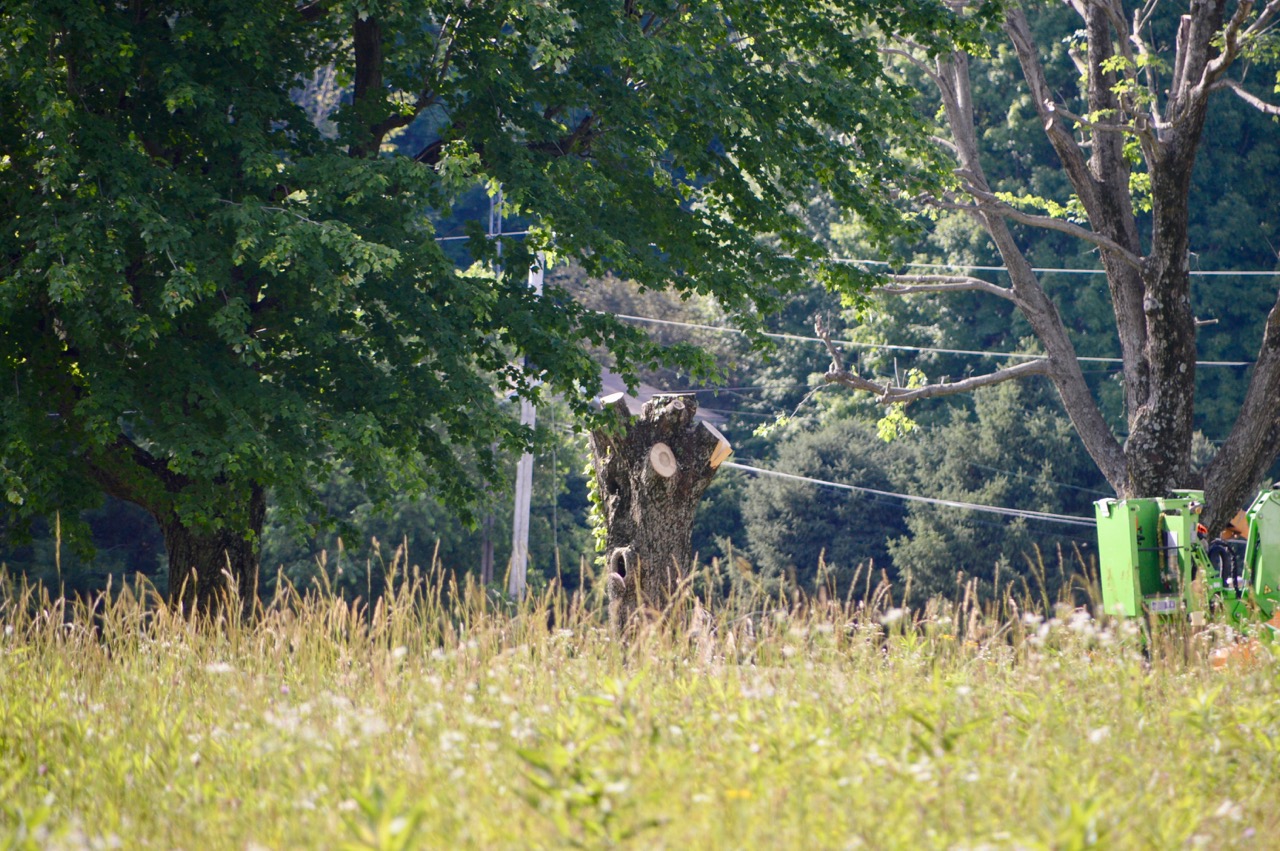 Still, Sadie was onto other and better things ... identifying scent. Stella took the lead for most of the walk. She wasn't fast but persistent, almost as if it was too hot to walk and she couldn't wait to get back to the house. 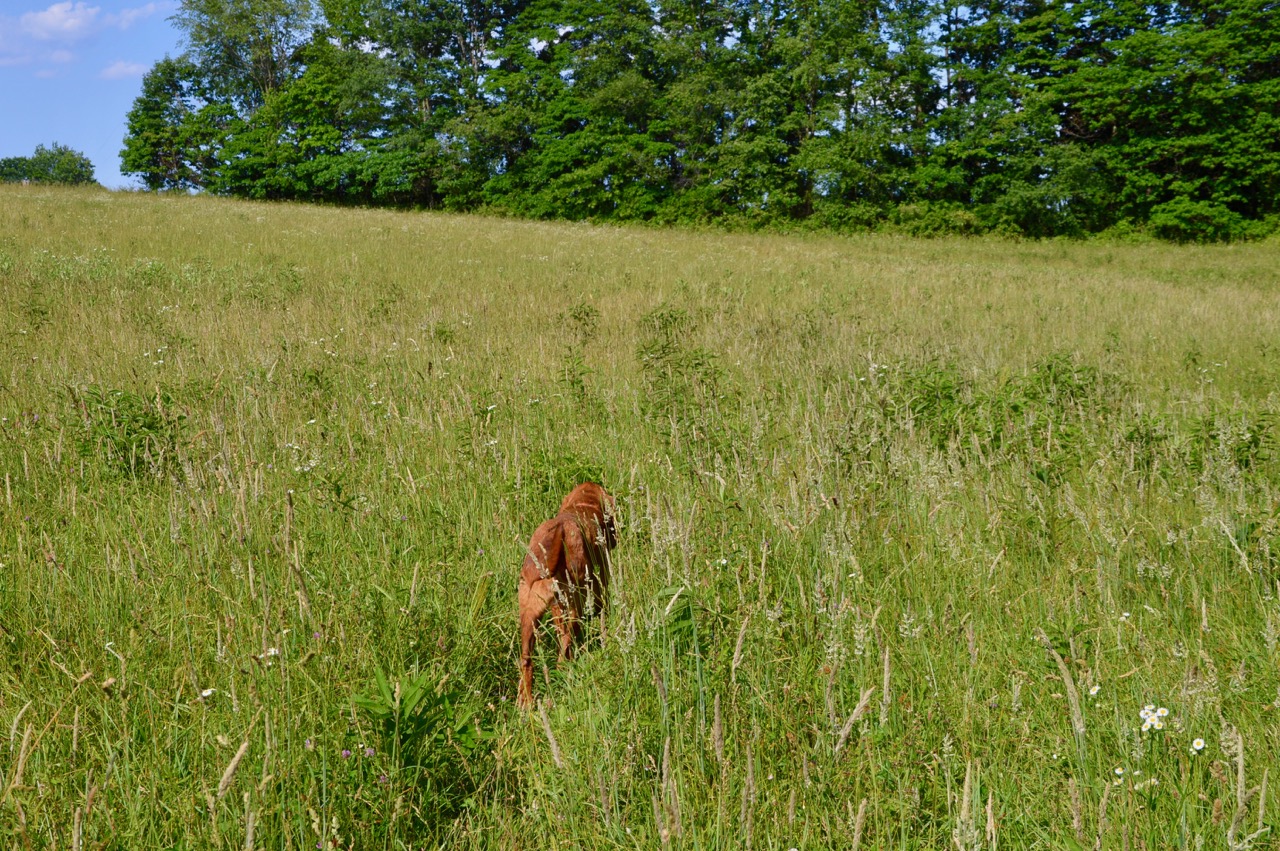 Sadie was locked in with her nose to the ground and her tail wagging. 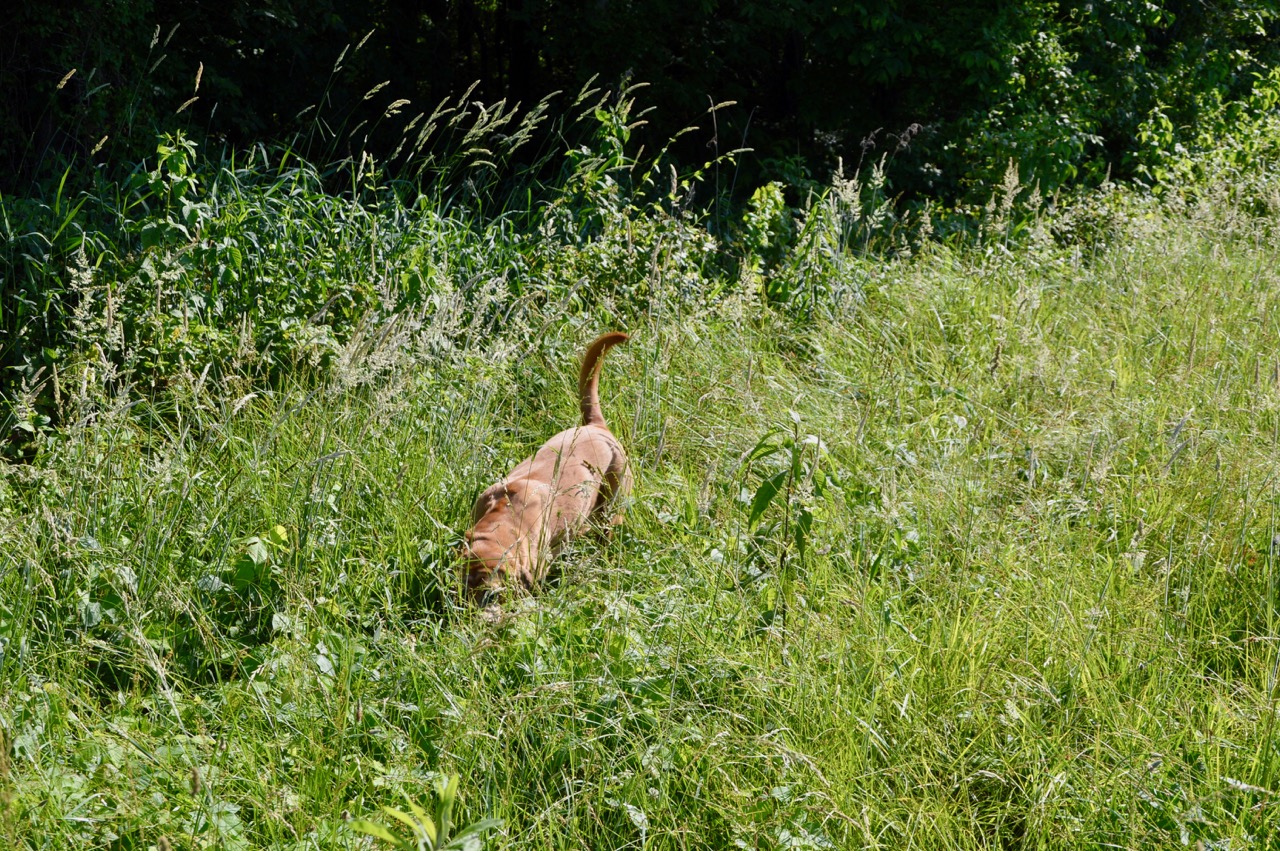 I was surprised that it did not feel as hot as the thermometer and my iPhone was showing. There was a slight breeze from the NE. It was nice and hot but not what I would call blazing hot ... there were no second thoughts about take the walk now instead of at 8pm. 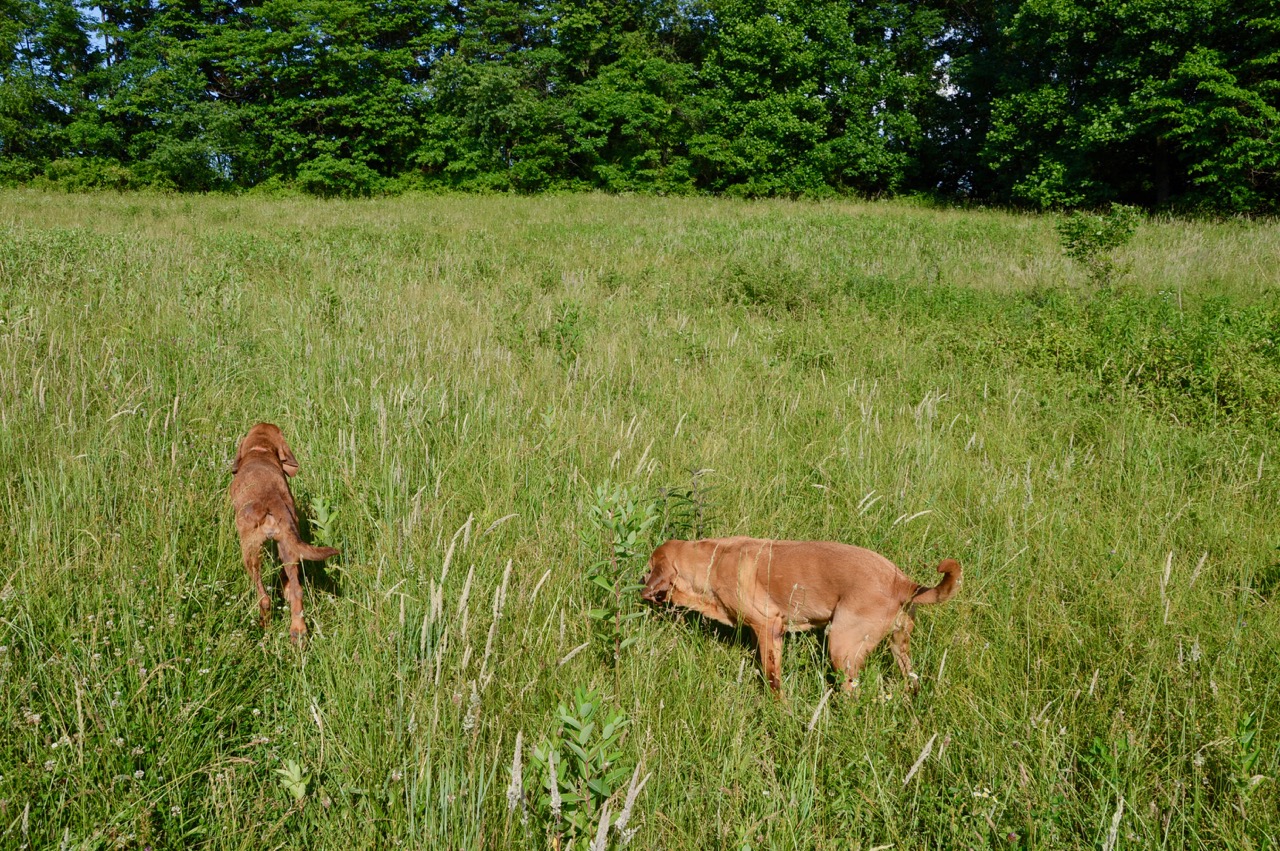 What I would consider the halfway point, the hounds are feeling the effects of 89°. Their tongues hang out, their pace slows down and they stay near me on the path. 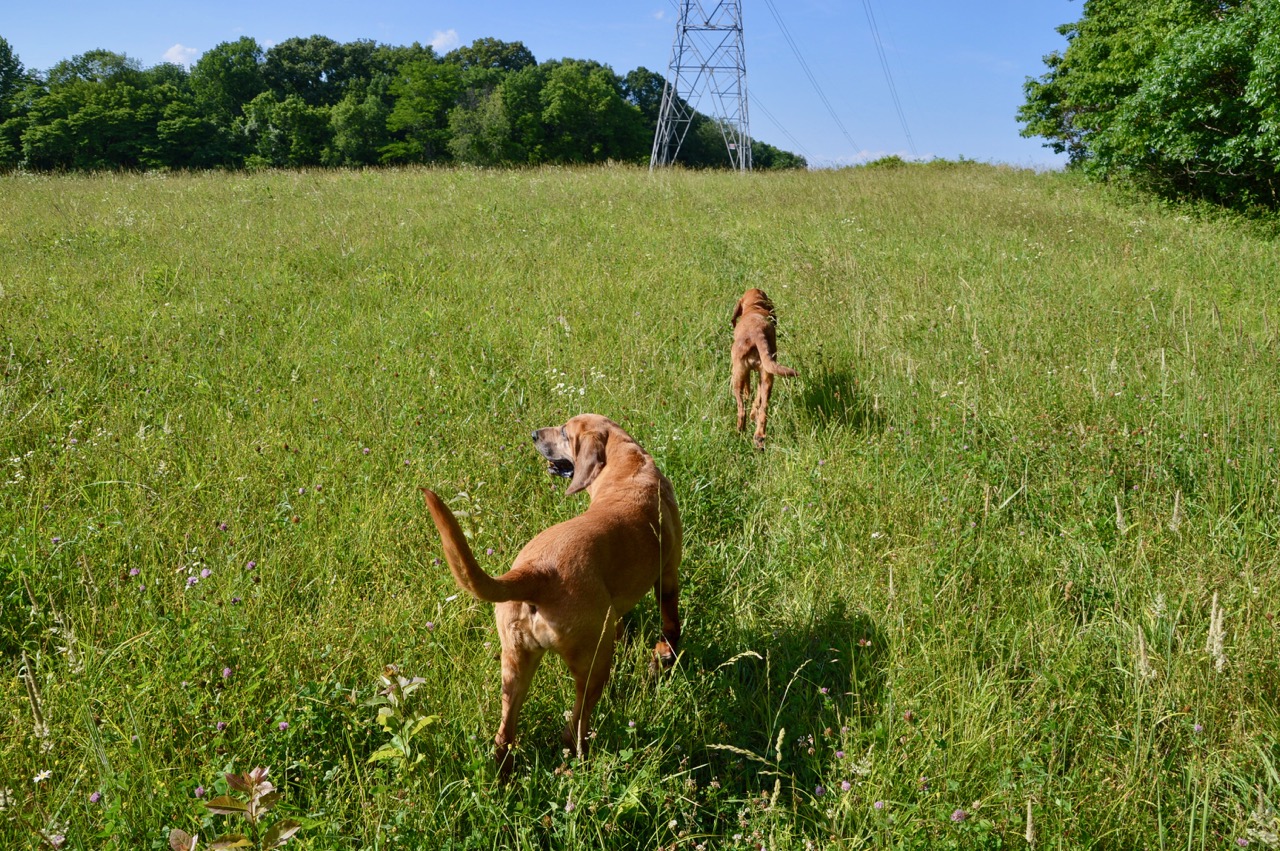 As we turned left for the final leg of the walk ... Stella stopped as always to scratch herself and then headed our way to catch up. 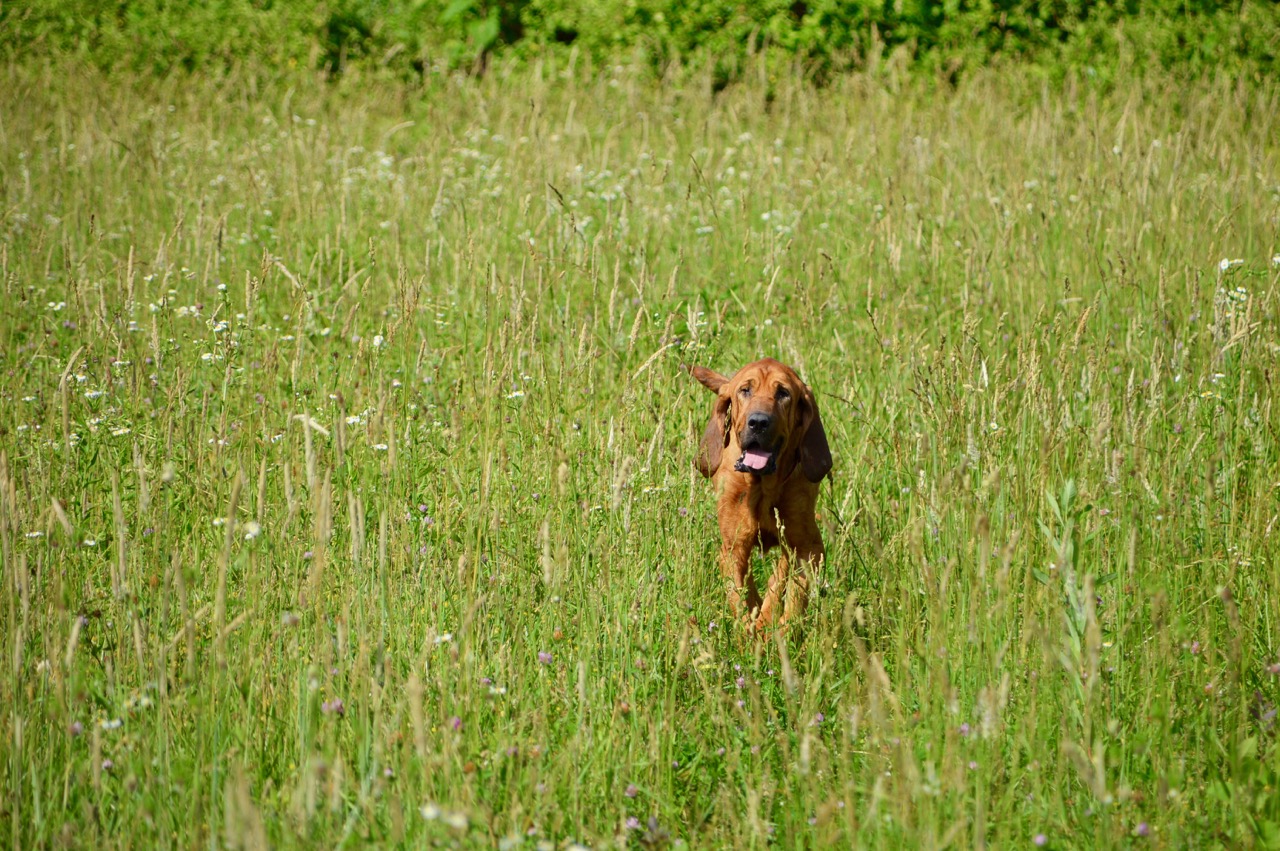 I am now feeding her 6 measured cups of dry kibble per day, split between breakfast and lunch. The vet was happy with the 5 pounds of weight gain and was encouraged by the clean blood work. I felt much better about her situation after seeing those two results. 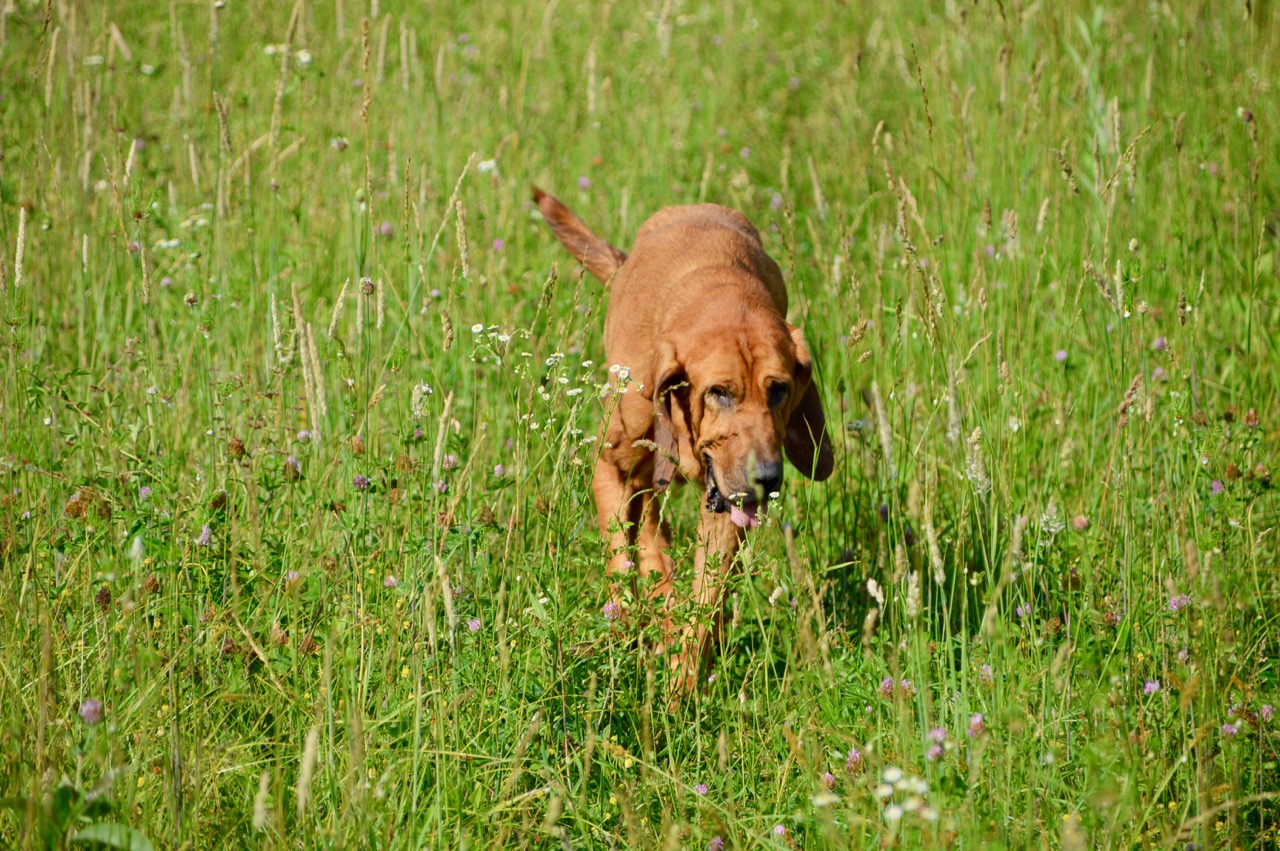 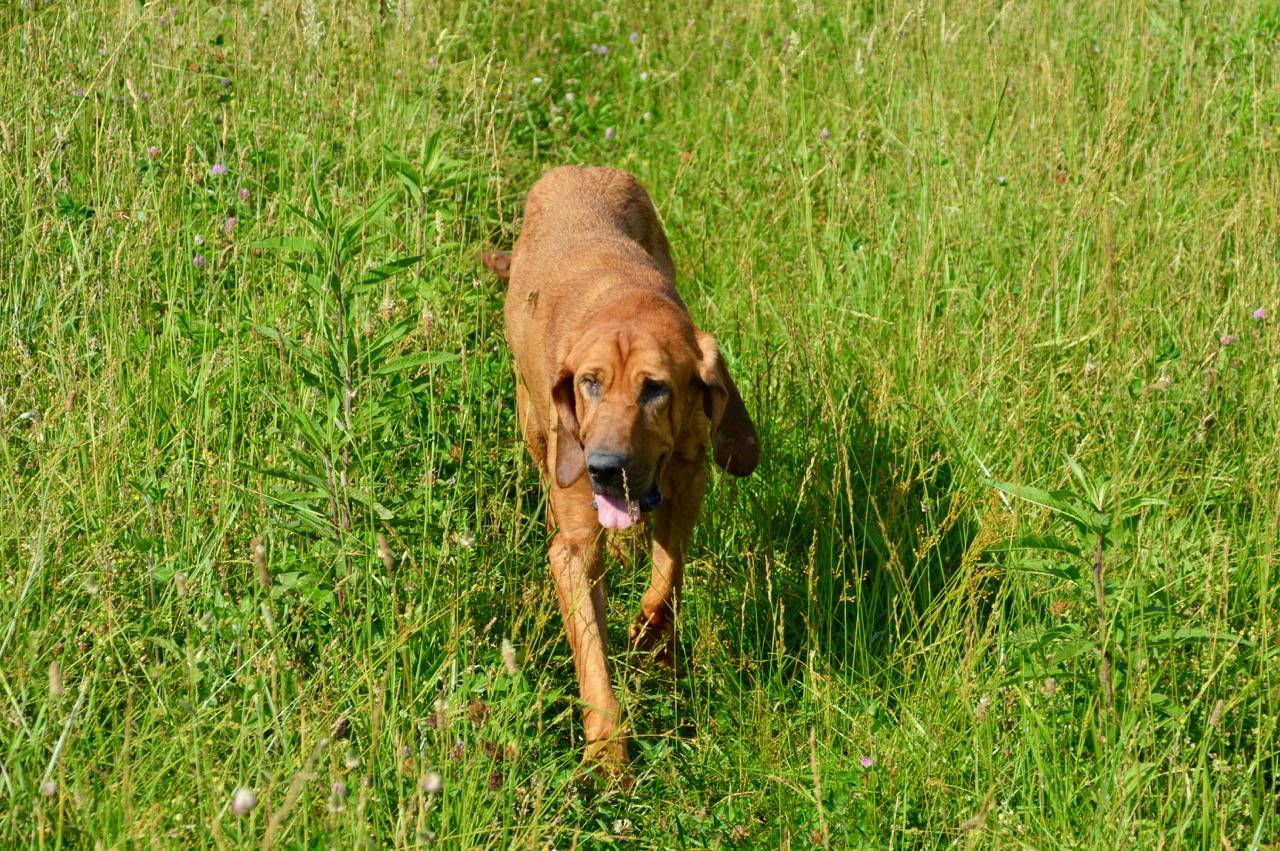 Sadie finally saw some of the parked tree equipment next door and for a few seconds I thought she was going to take off in that direction to check it out a little closer. 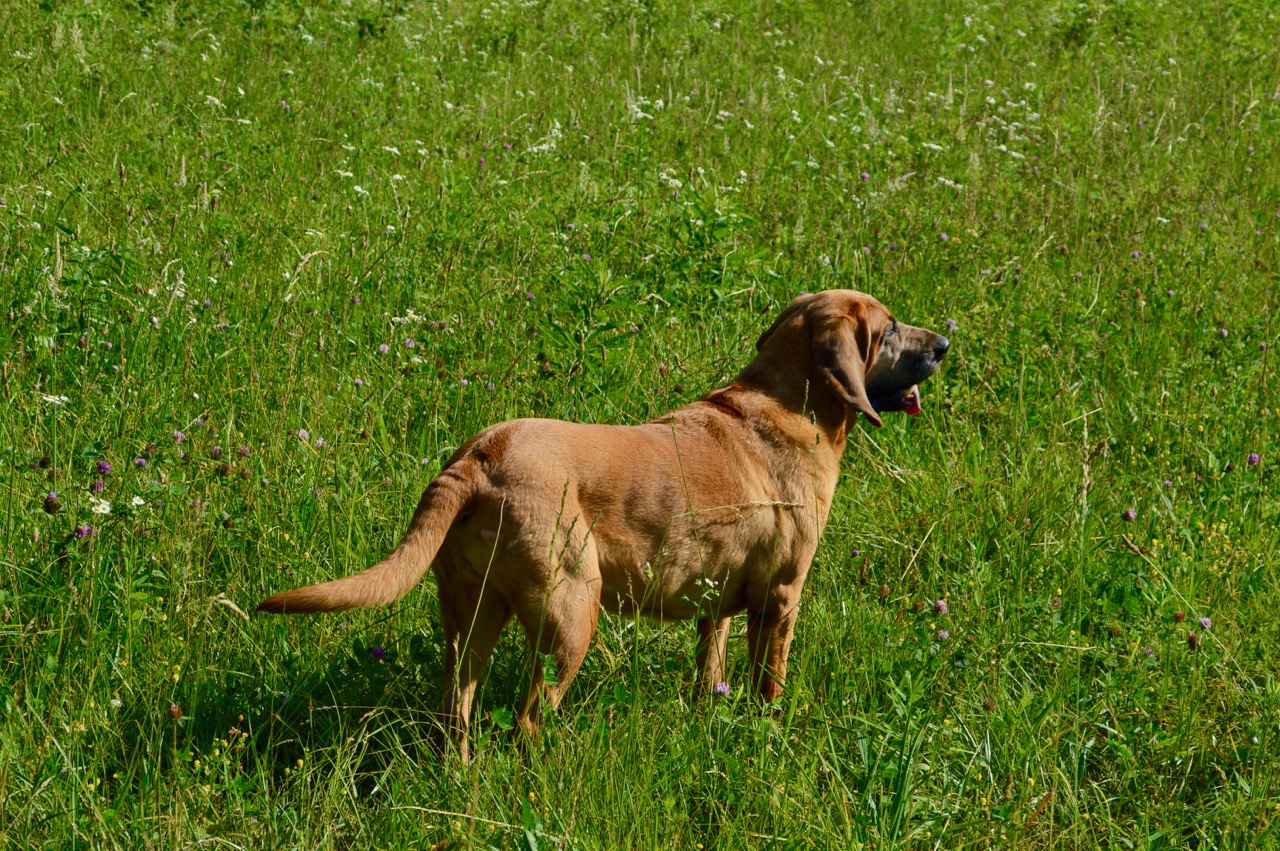 With both hounds lagging behind so close to the end of the walk I was hoping they would keep themselves occupied so I could walk ahead and see if the snake was still there. If it was, I planned to pick him/her up with a rake and move him/her into the field. 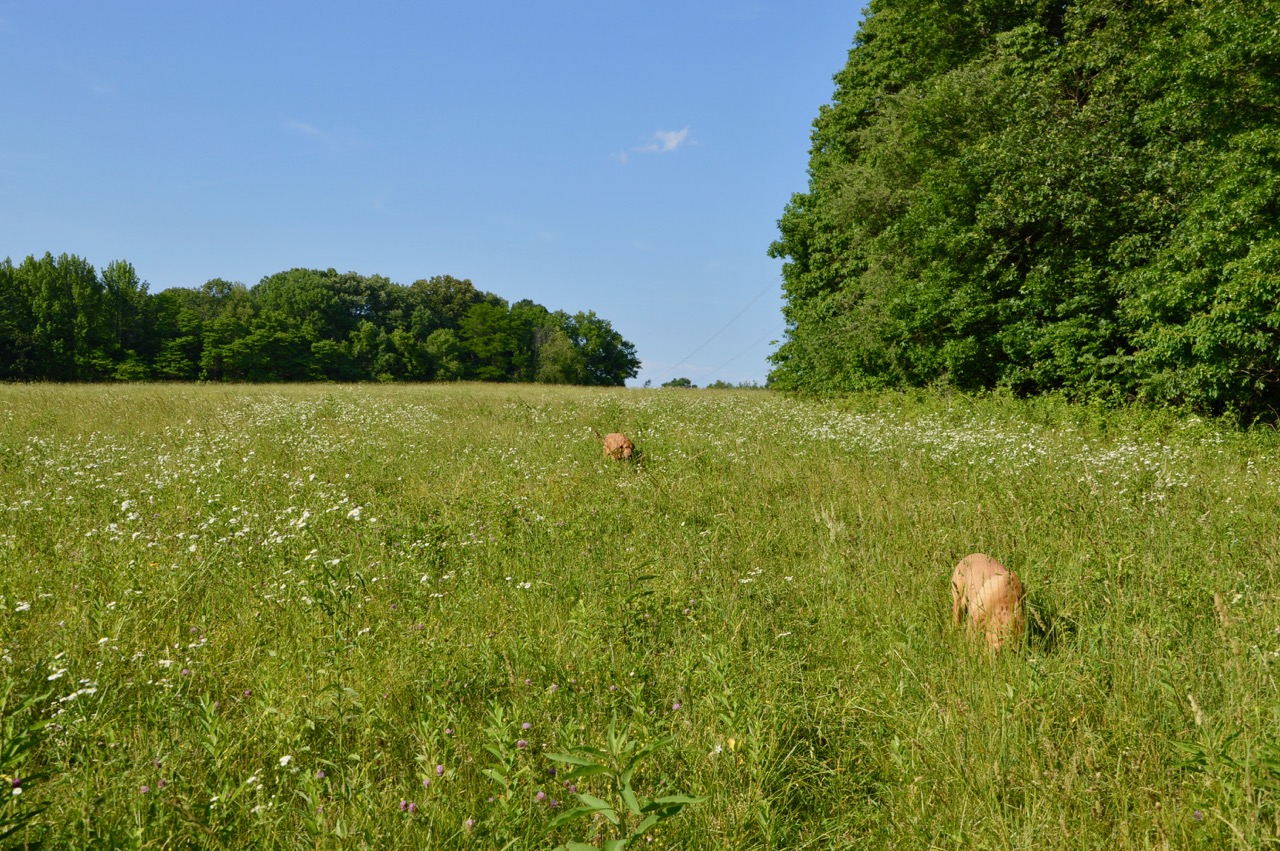 I guess snakes would be something I might have to live with if I decided to stop mowing my yard and letting it look like the field. I'm not sure how it would look being that close to the highway amongst three other houses that mow their grass like a golf course fairway ... but it does interest me for some strange reason. 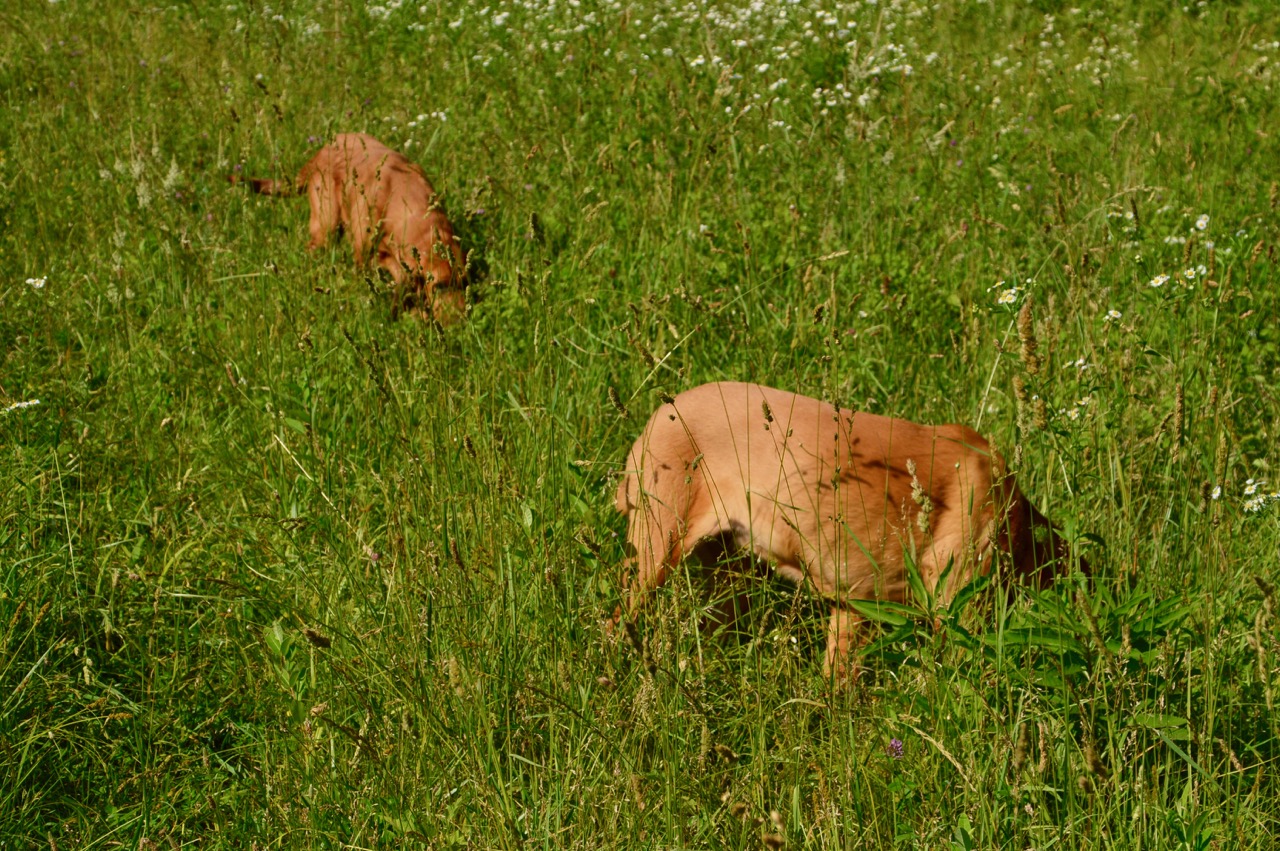 With the hounds still busy I hurried my pace to see if the snake was still there. I was happy to see he had left for a better place, wherever that was. I checked everywhere in the carport, behind the two trash cans, under the cars ... but the snake was gone and the hounds would not have any kind of confrontation on their return home. 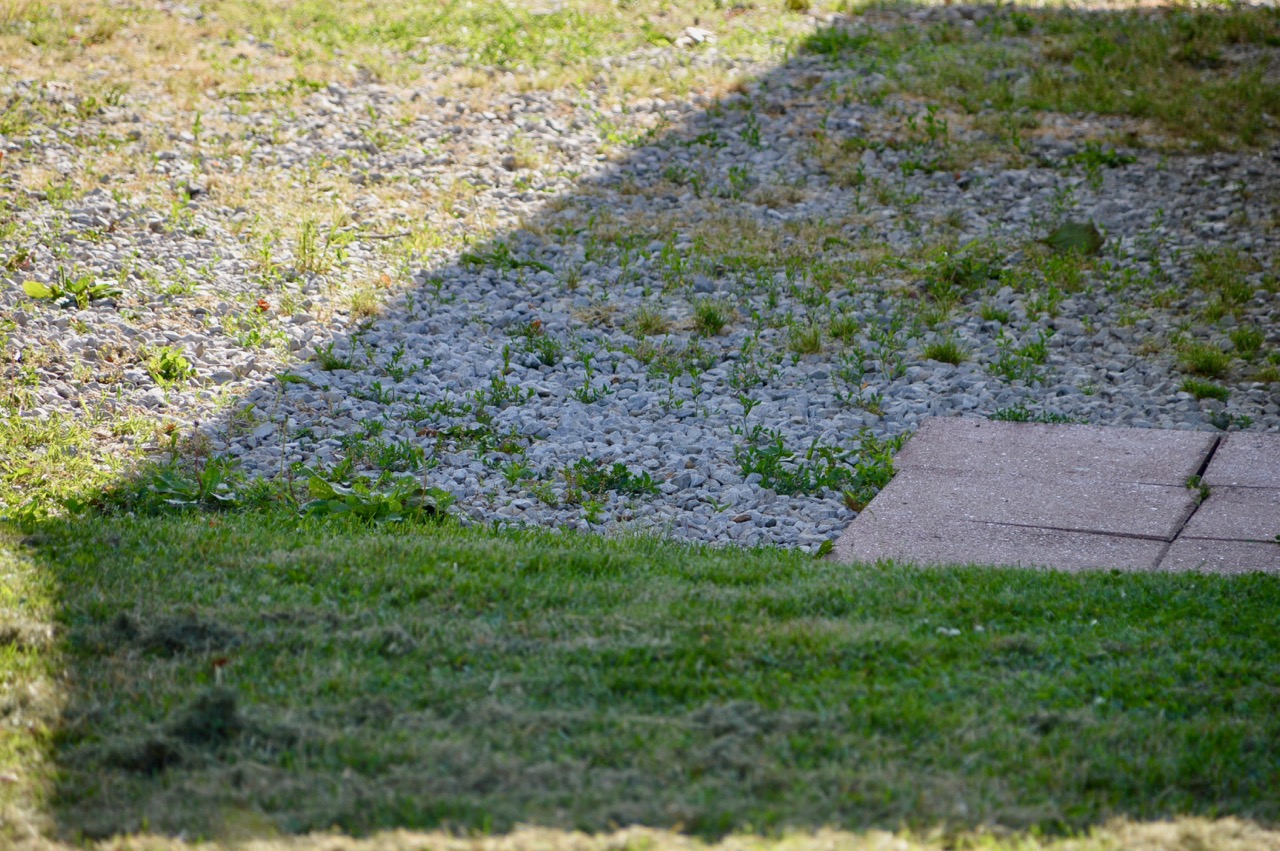 With everything so green around here, this leaf stood out like a shining star. I always wonder if there is a message behind something like that when it happens, but that's just me. 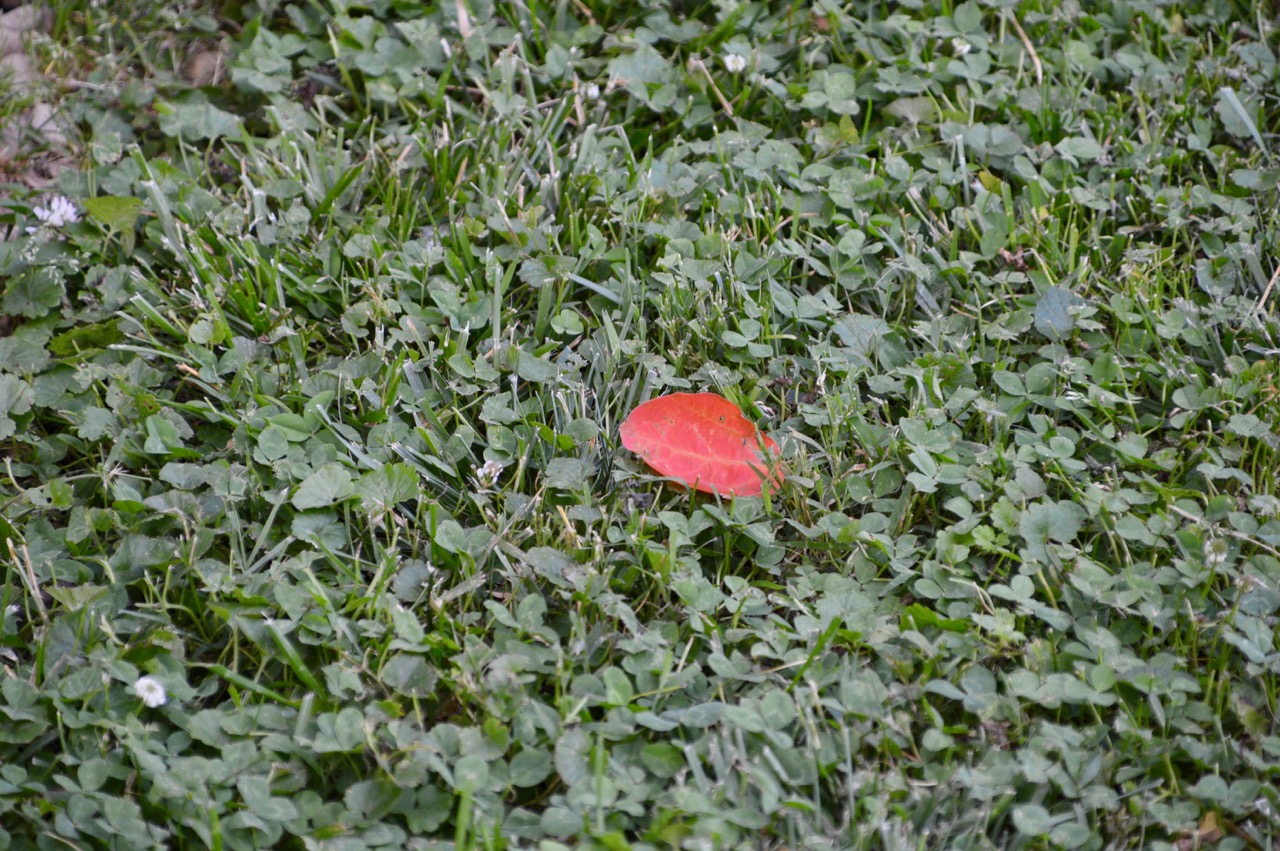 I did not have to call the hounds to come in. As I walked back out into the yard Sadie realized that I wasn't around and started sprinting for the house. Stella looked up and trotted for a few steps behind her. 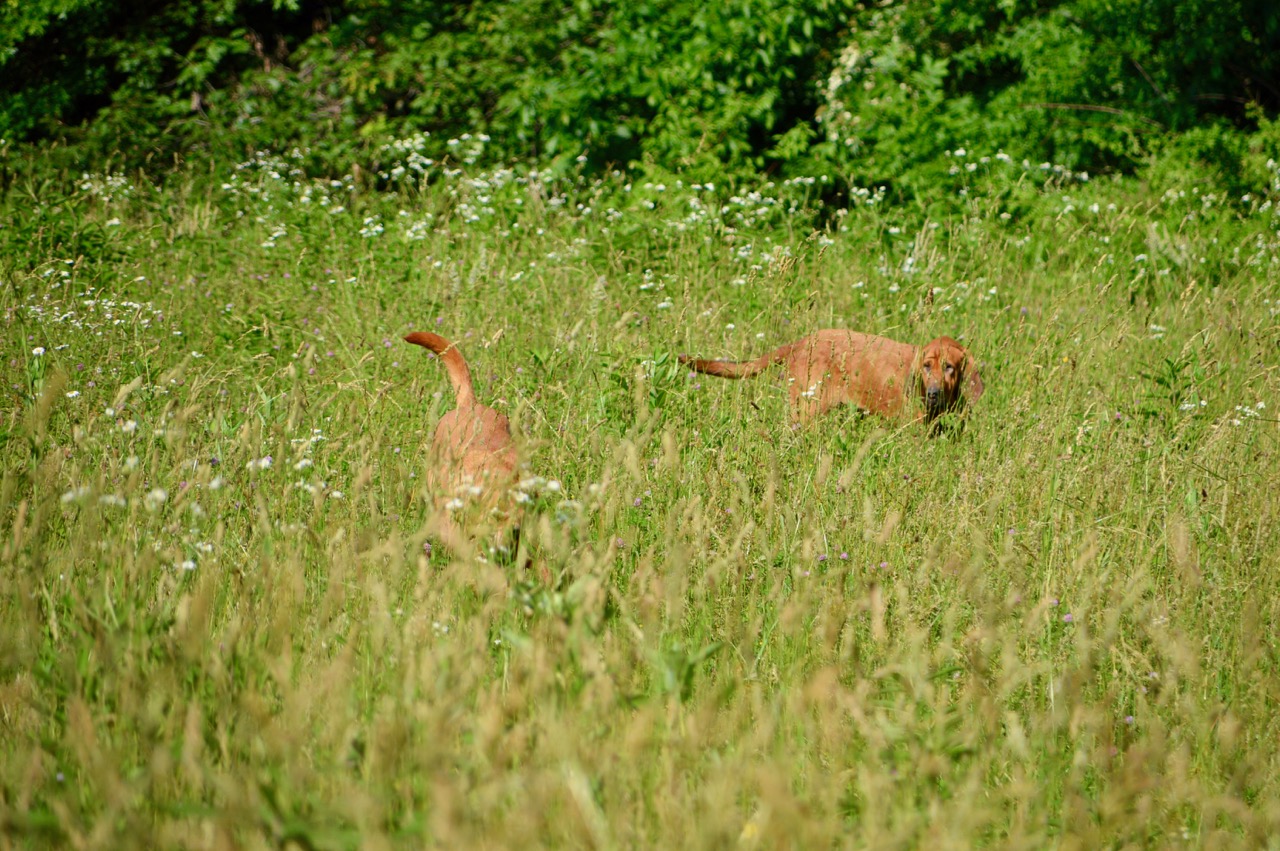 Sadie went straight to her early evening sleeping spot under the coffee table. 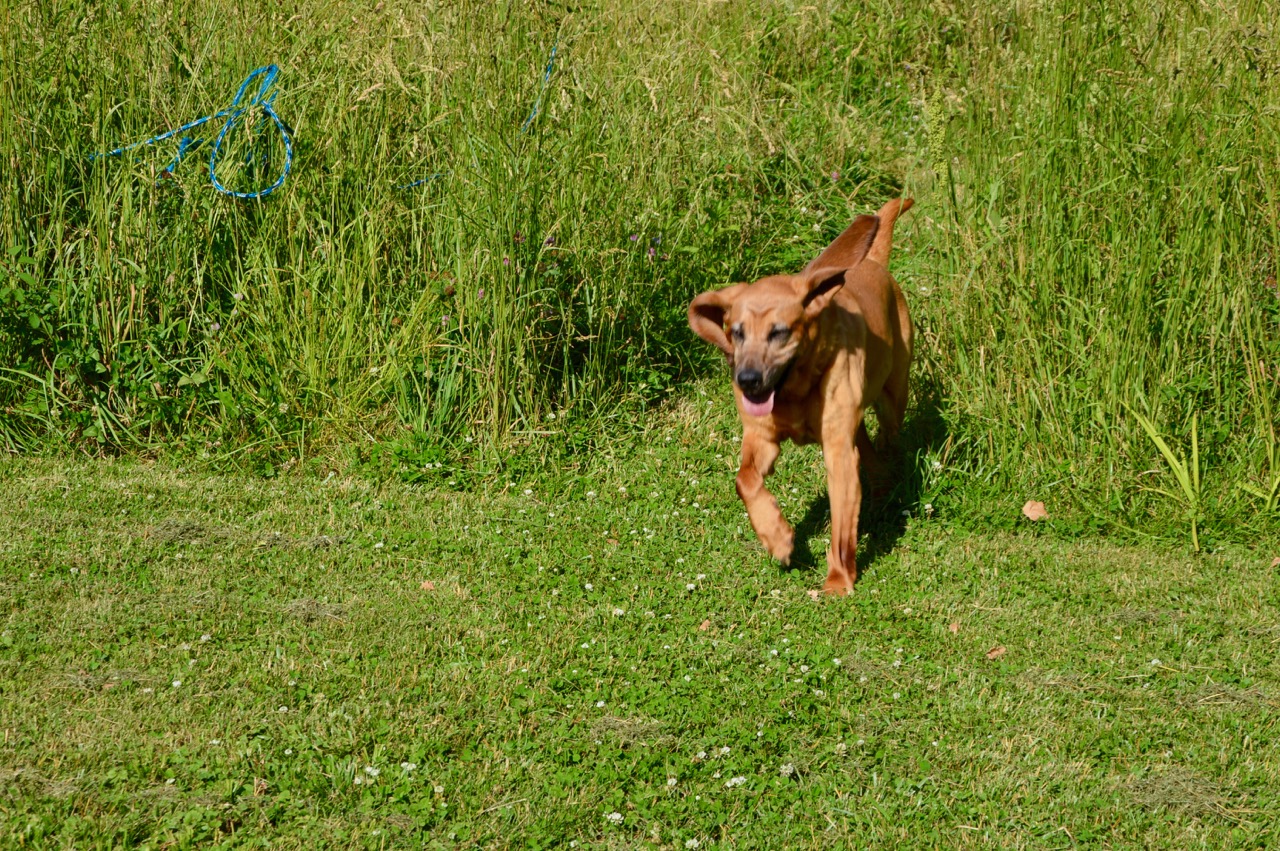 While Stella 'cruised' in and curled up behind my desk chair as I downloaded the photos from the Nikon, and put this post together. 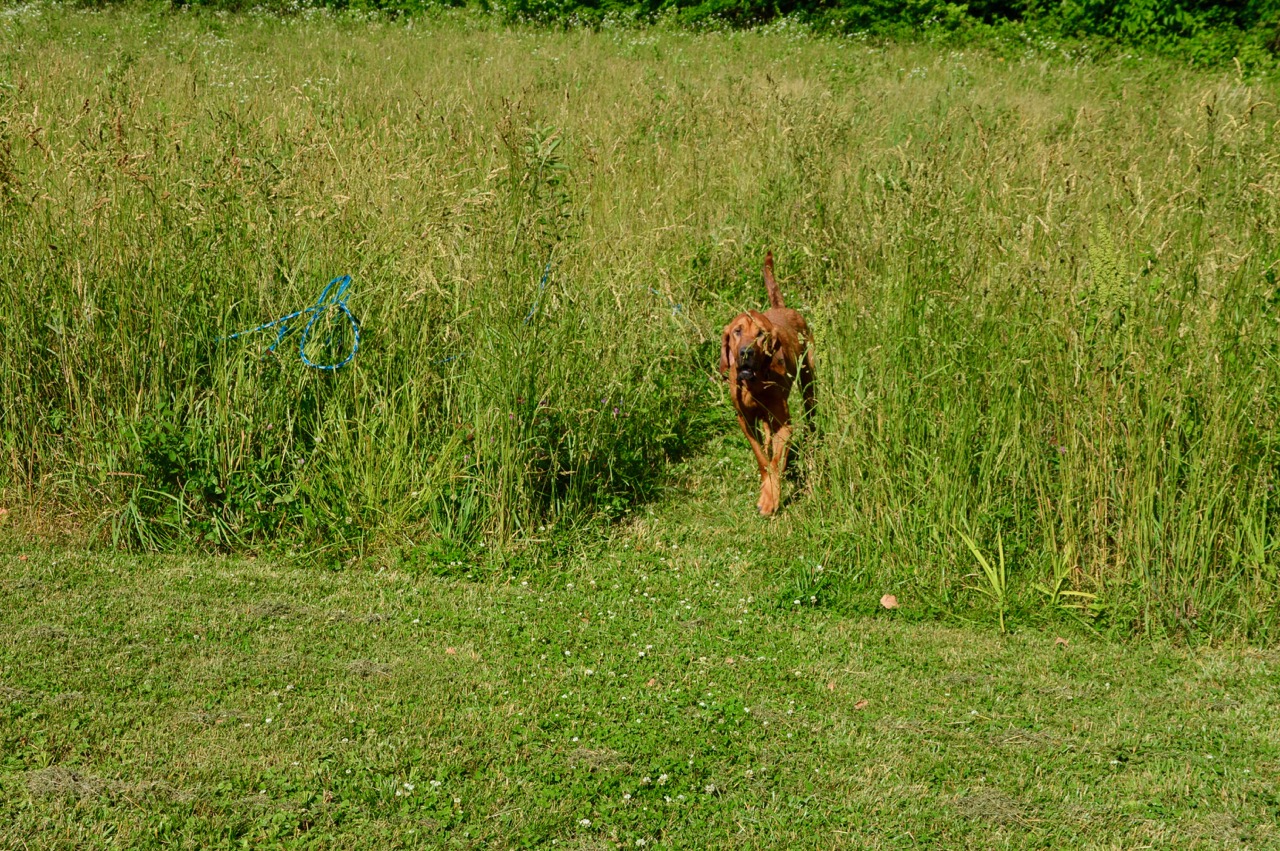 For taking photos I like the late afternoon light much better than our 8am walks. I cut my yard last Friday but late Sunday I had an idea to cut it one blade adjustment lower. I didn't like what it did or looked so I left the front yard cut a little higher. I'd rather have it a little taller and greener than short and brown. 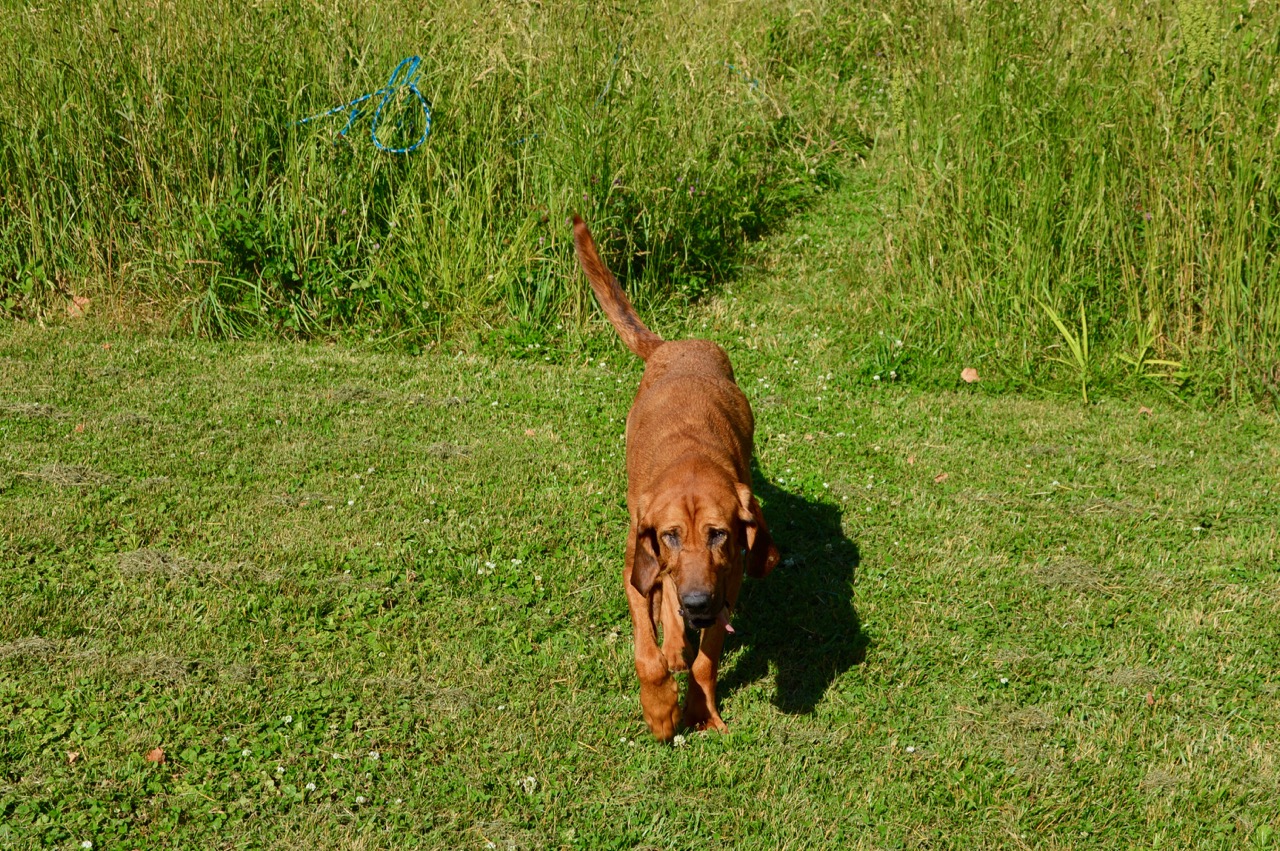 Turns out it did not matter that I bought my new iMac a couple of weeks ago. Apple came out with their annual announcement about new products and upgrades today. The only thing dealing with the iMac model is that they are making one for the professional user and businesses. So what I have is good for work here at home.

I can't picture another day as exciting as this one ... but I will focus on those house keys anytime I am driving somewhere. I'll also keep an eye out for our visitor in case he/she wants to come back and visit the hounds.

Beautiful weather here in 'the tropics' of Southern Indiana.
at June 05, 2017