The Hounds Take A Record Number Of Walks 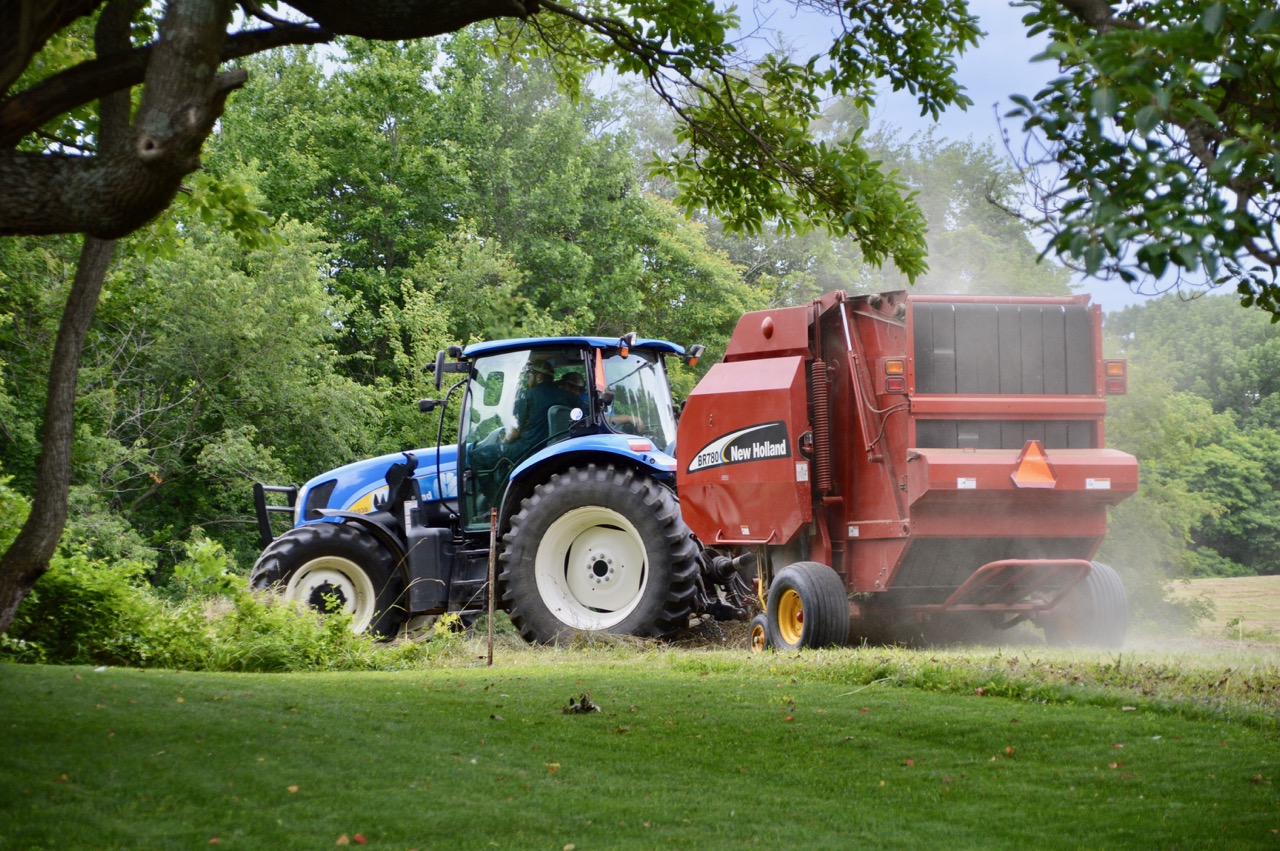 It was after 5pm before I heard that familiar sound of a tractor right outside my computer room window. They had waited for the daytime sunshine to dry out the hay and flowers that were cut on Saturday, yet rain clouds were overhead and predicted rain was just hours away. 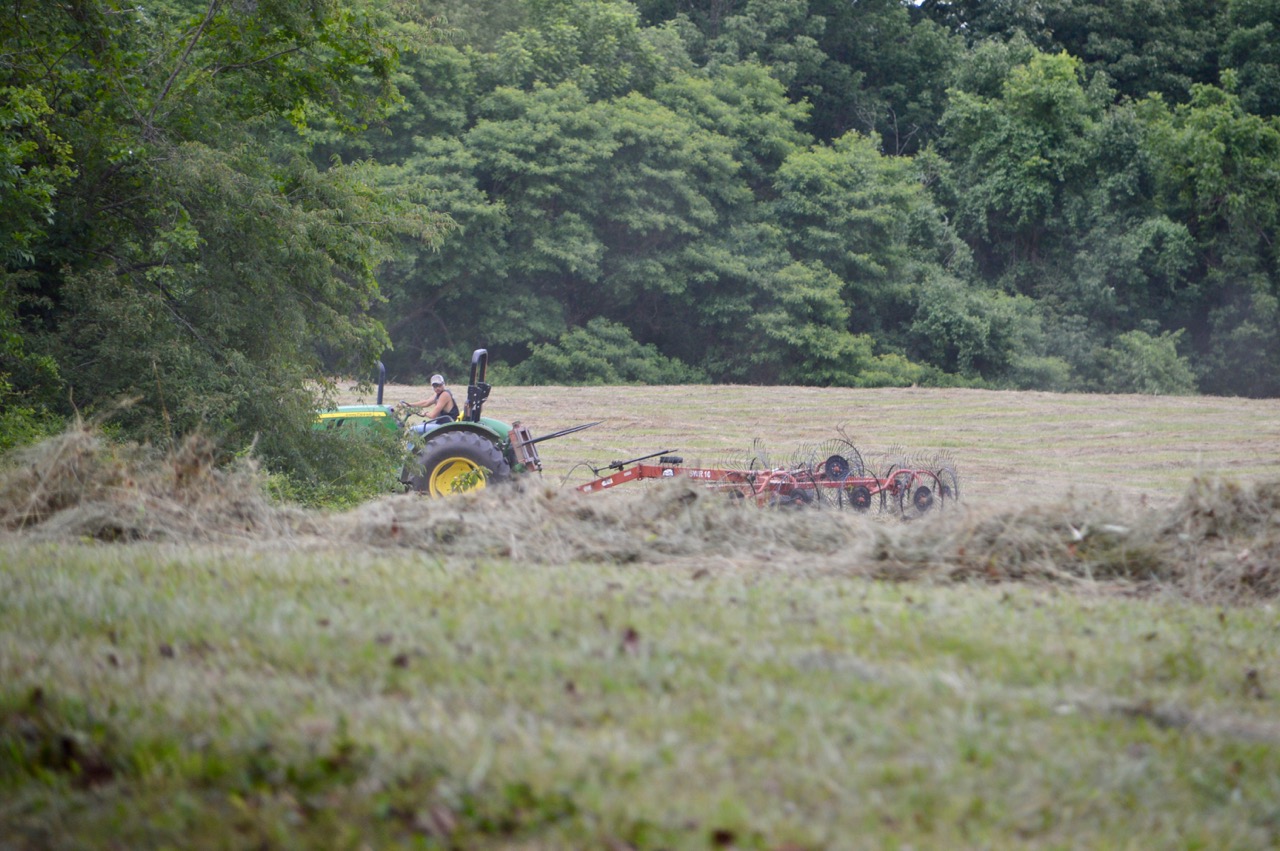 With the day being so nice and it being so much easier to take a hound walk, they took a record number of walks yesterday ... 4 of 'em. I could tell by the amount of hay laying in rows there just wasn't as much as in past years. With all the rain this spring and sunshine that was hard to figure out. 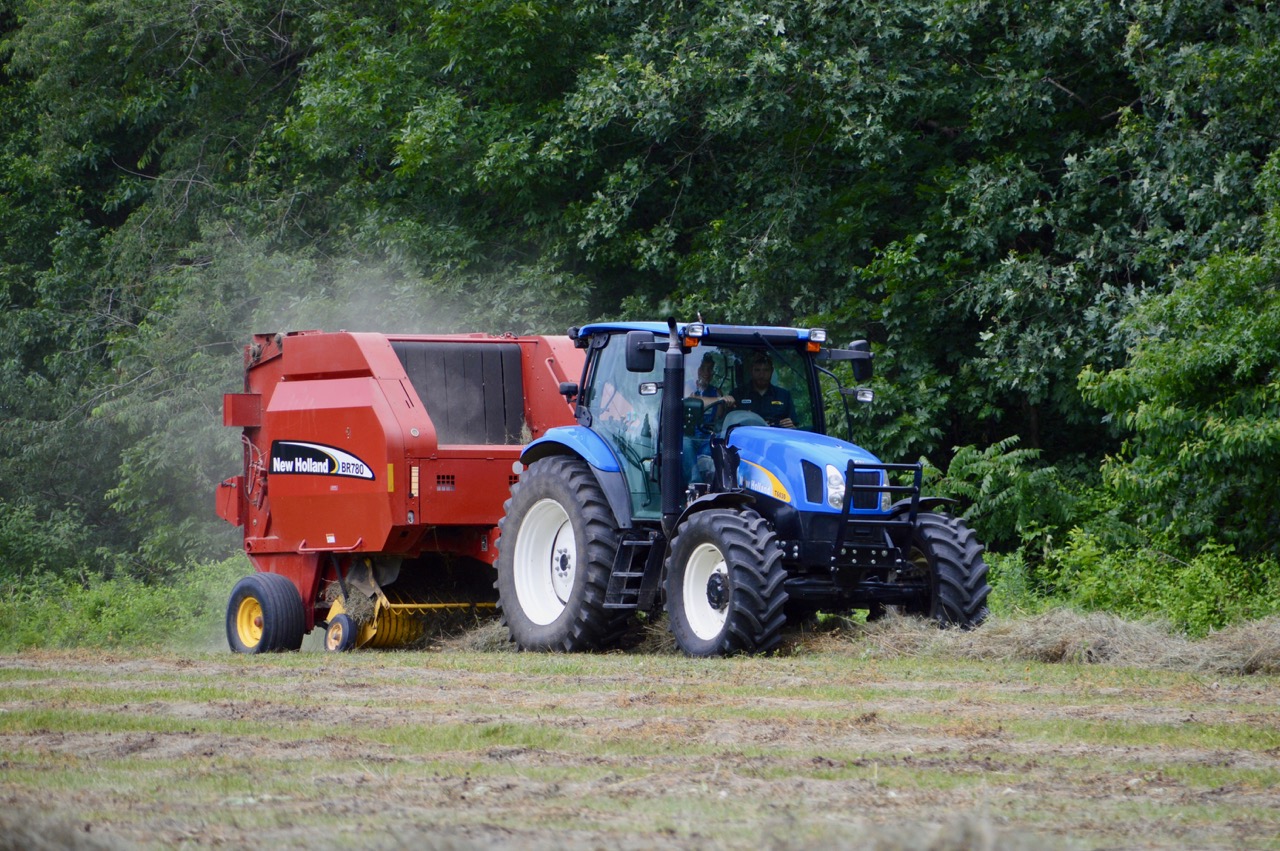 I was standing at the corner of the house taking this zoom'd photo. I didn't see the guys inside the tractor smiling until I downloaded the pictures. Were they joking about something or seeing me with a zoom lens pointed at them? They don't know they are on a blog seen by only a few people but scattered all over the world. 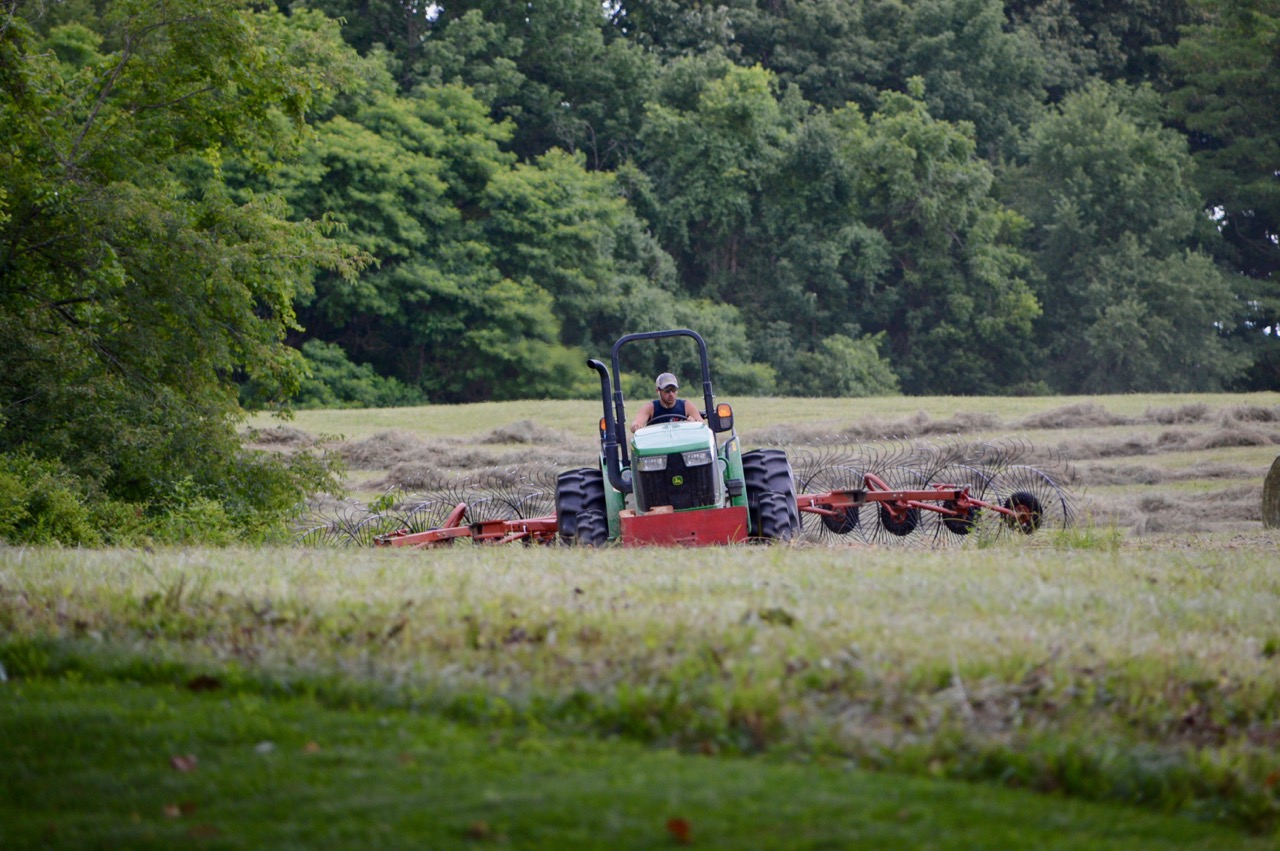 The raker and baler were working pretty well. Intellicast weather radar was showing rain about 50 miles away ... it never showed up nor did it rain after midnight where they said there was a 75% chance of rain. With the warmer than normal winter and the nice weather this spring I find it strange the small amount of hay they were able to bale. 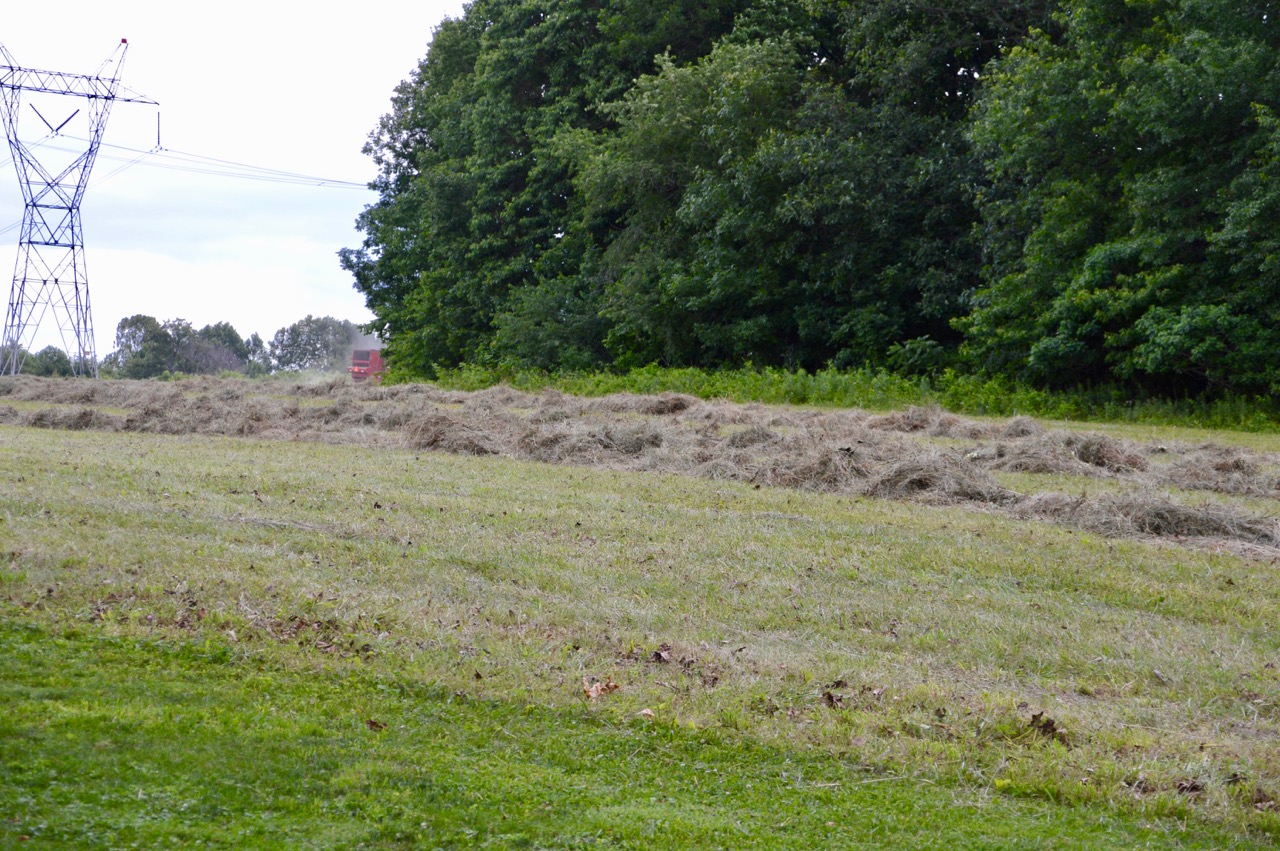 By the time I took my two pictures that I take every day across the highway at the corn field and then from the corner of the house toward the back ... Sadie and Stella were already starting their walk. I decided while putting on my hiking boots that I would let each of them walk on their own ... where ever they wanted to go. With the field cut is is of course so much easier to keep track of them. 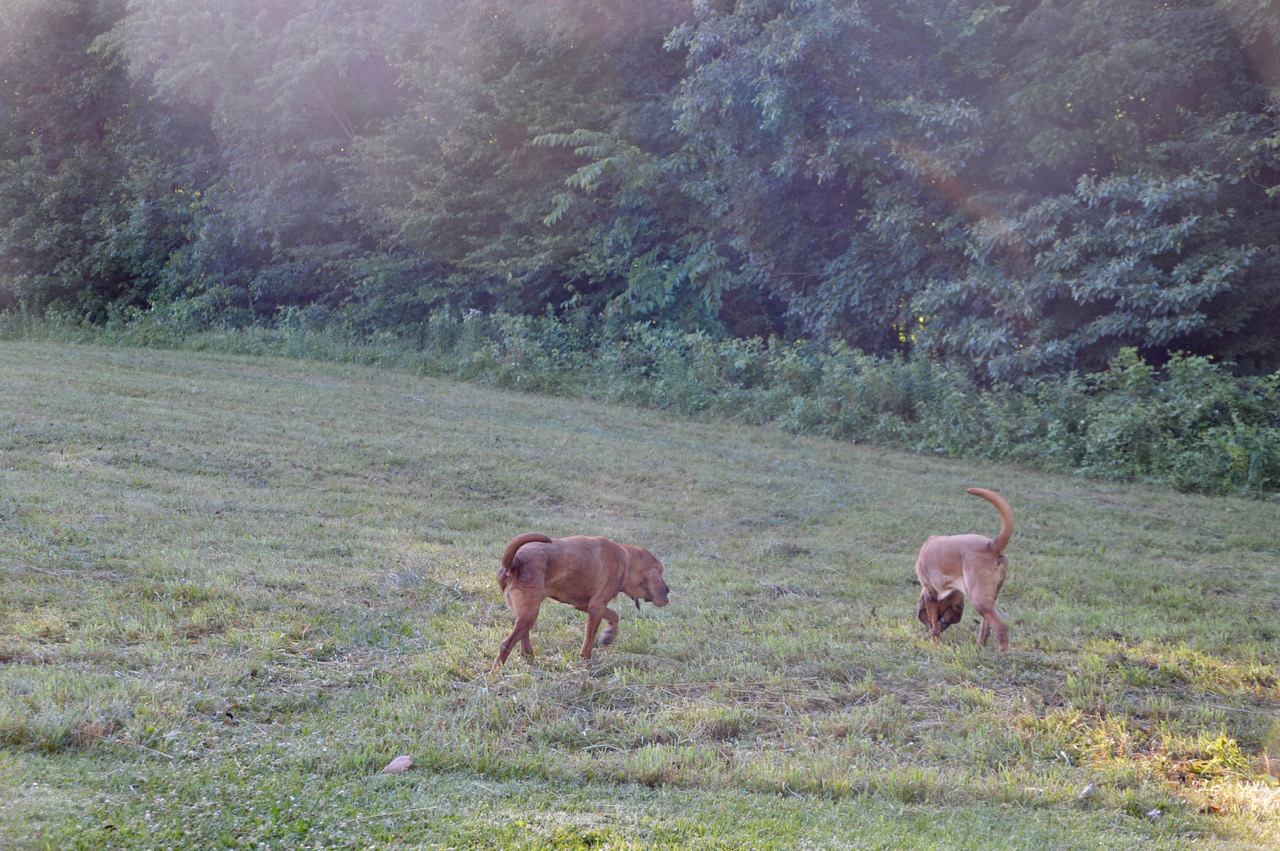 It looks so much different when the field is cut and baled. Basically back to being a 'clean' field and less stuff for them to find to eat. Most of their favorites are now inside those rolls of hay. 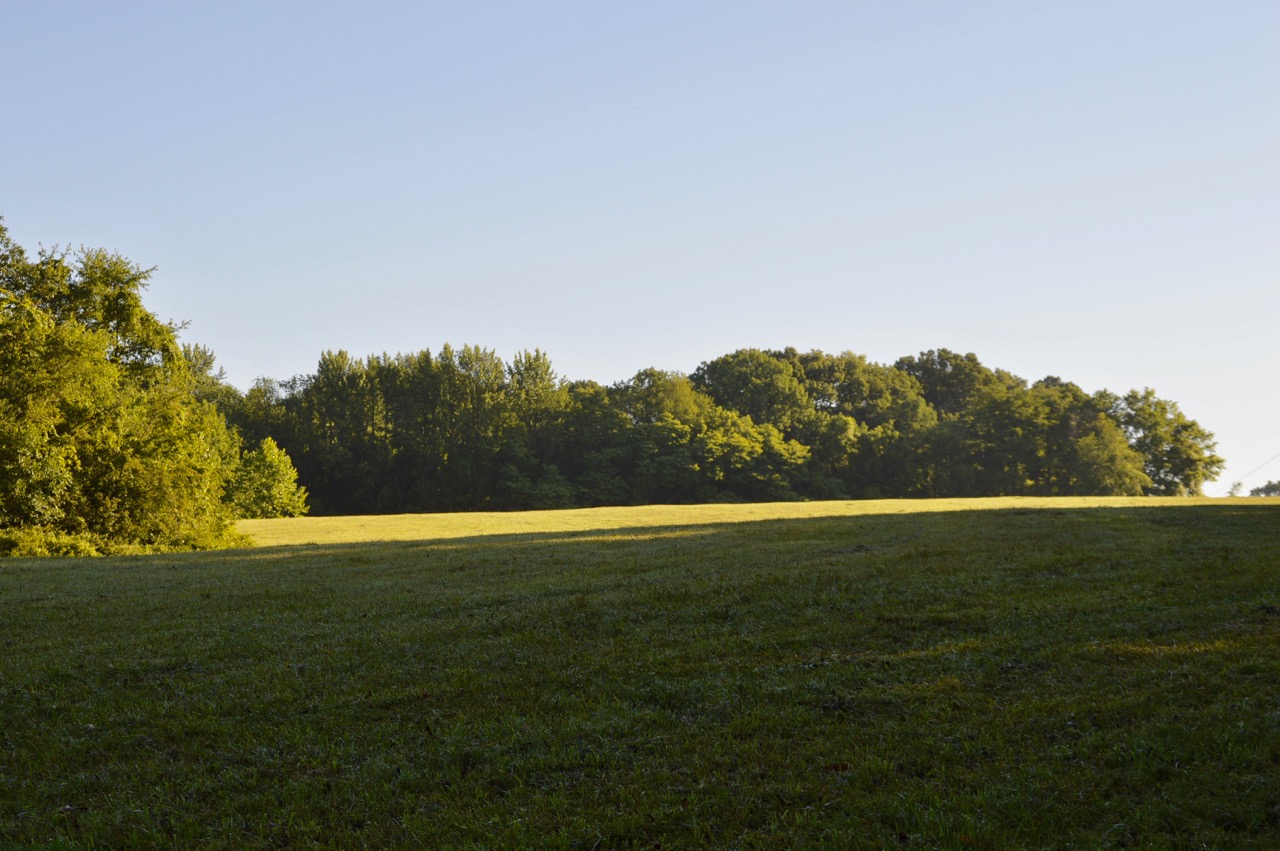 Back to the 4 walks day ... Sadie likes to walk after their noon lunch for walk #2. I usually wait about an hour after they eat before we do that. Then in late afternoon she and I are ready to take off again after all of them have slept all afternoon. With the weather so nice after 7pm ... that results in a 4th walk. 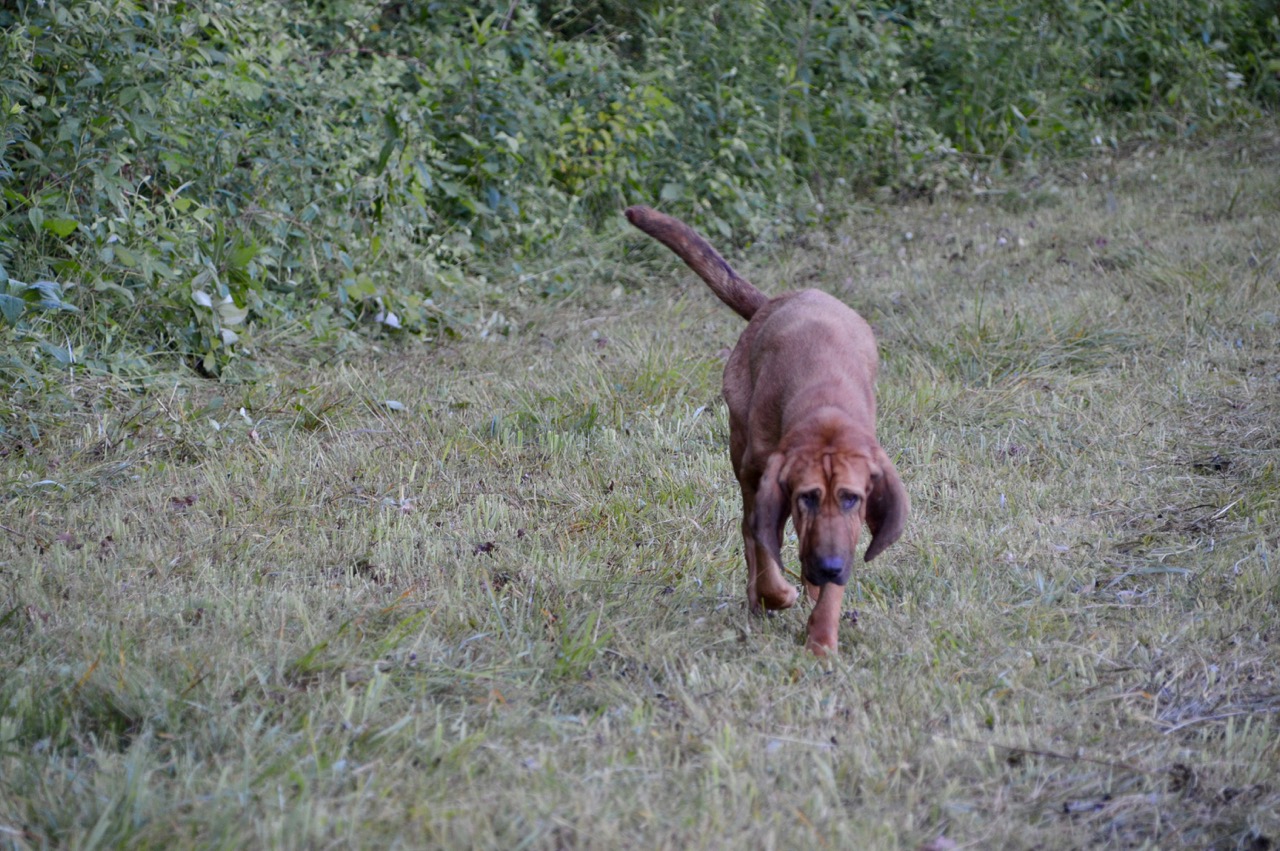 Of course that gets my number of steps I take per day above the normal range. It equates to almost 4 miles of walking and even at a slow pace my heart rate gets to a level where I get a workout. The days I mow the yard is just an added bonus. 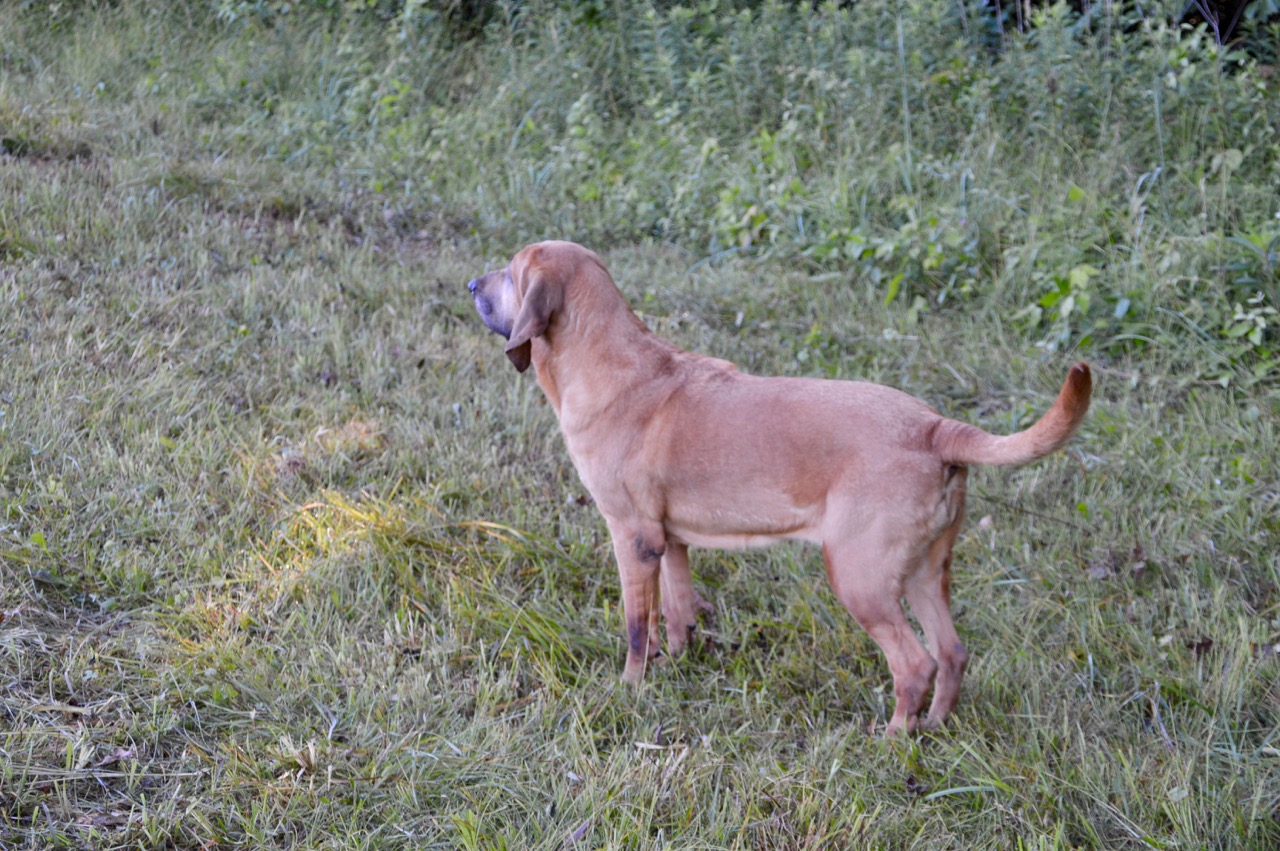 Yet, my 'to-do' list has come to a complete stop. My Apple Reminder app tells me I have 7 of them overdue. All are fairly easy things to do but would be very time consuming. Some of them would take more than 8 labor hours to complete. For some reason, over the years I have been pretty consistent in that I am motivated to do things on that list in early spring and not again until the hottest time of the year ... mid to late August. 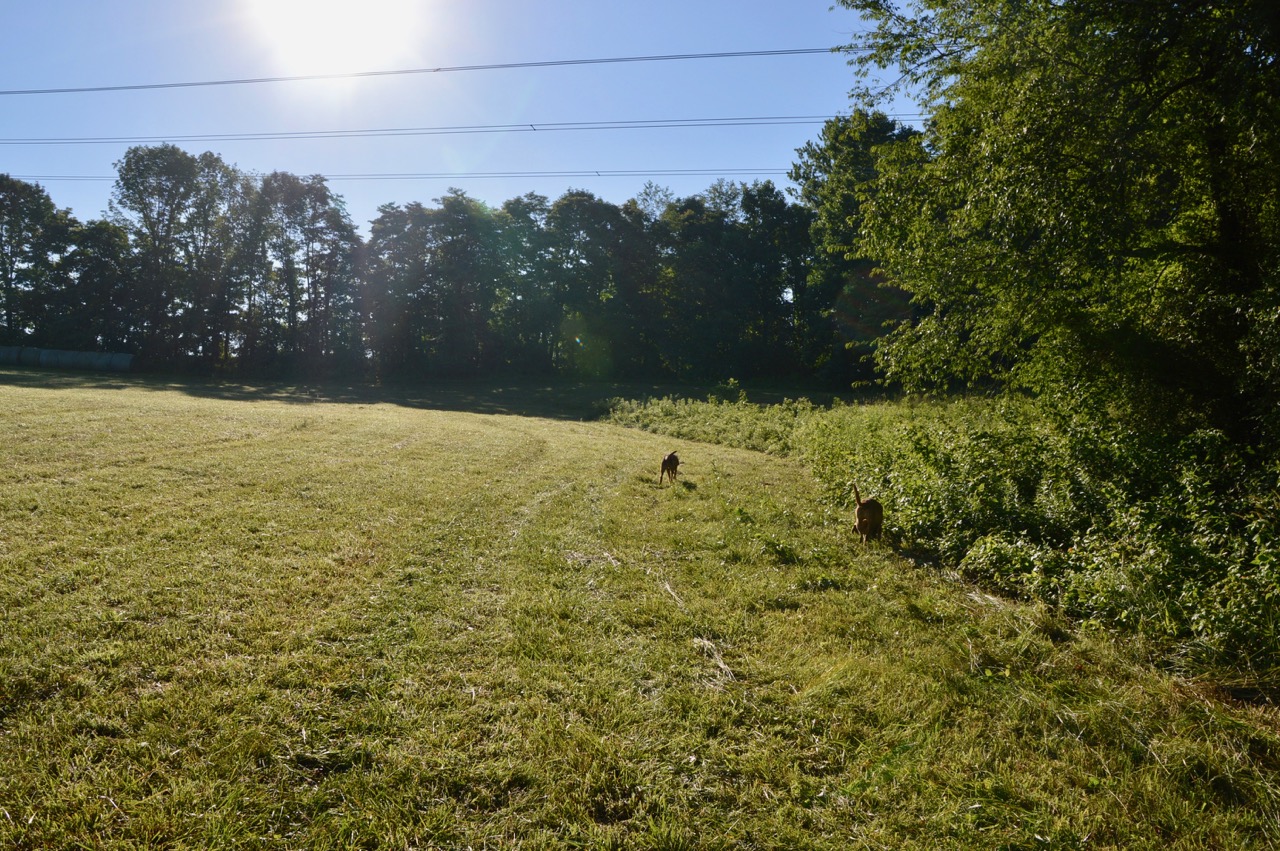 With the temps at 50° when we started the walk, it was sweatshirt and shorts weather on this morning walk. It was about at this point in the walk I remember this last winter when it was 9° and a strong cold wind blowing in my face. I prefer this weather to that freezing weather. 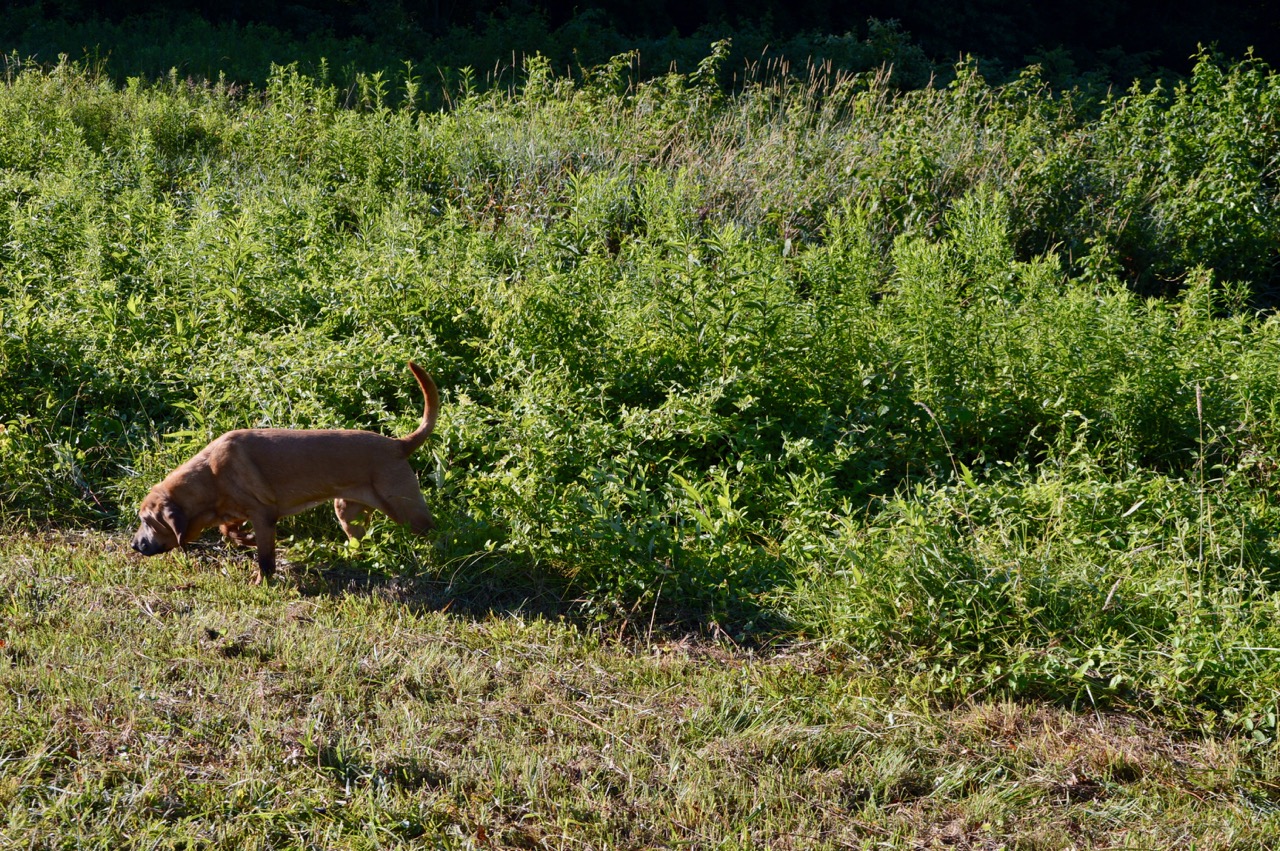 With total freedom given to each hound on this walk, they headed in opposite directions. Sadie went to the far right corner of the field and Stella took off toward the middle of the field and possibly to the NW, a direction she had never taken. That is typical for them when I don't 'herd' them during the walk. 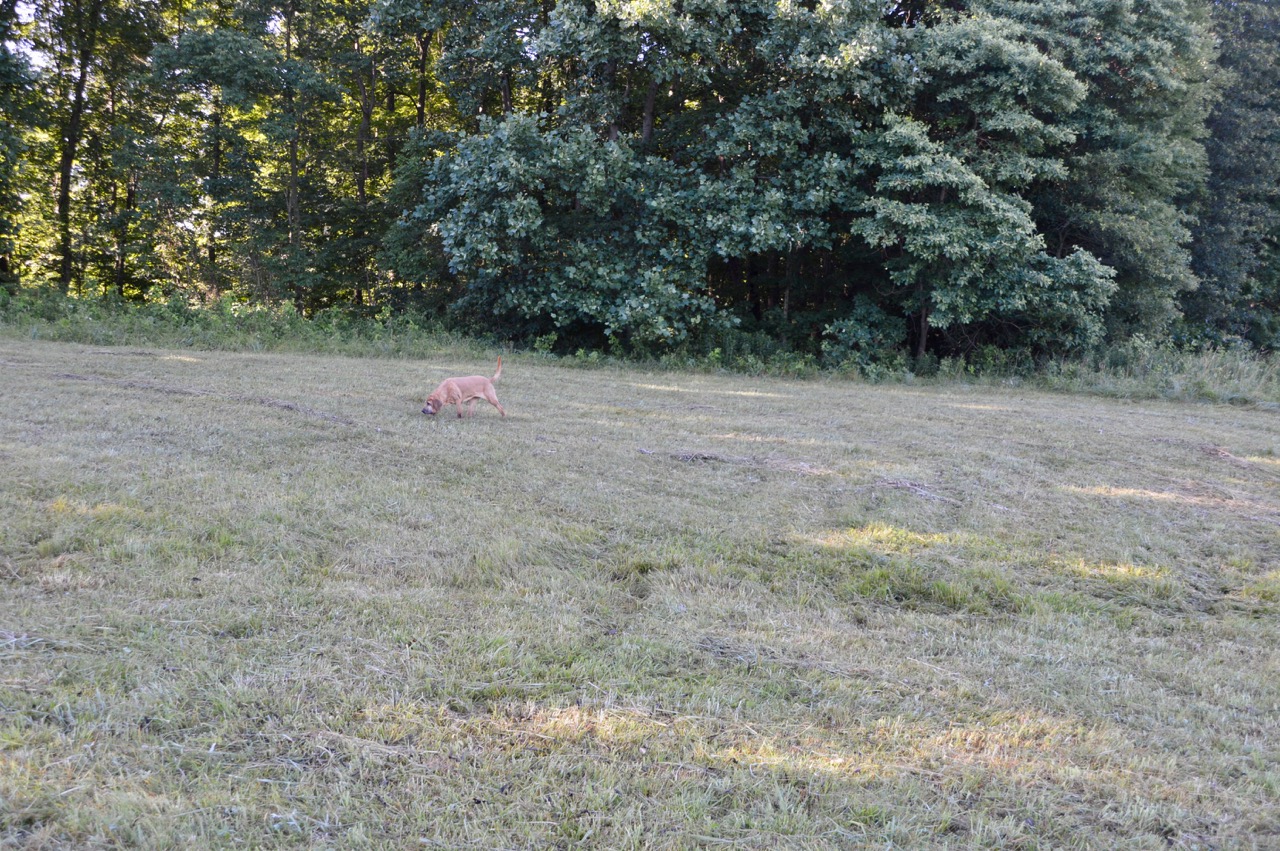 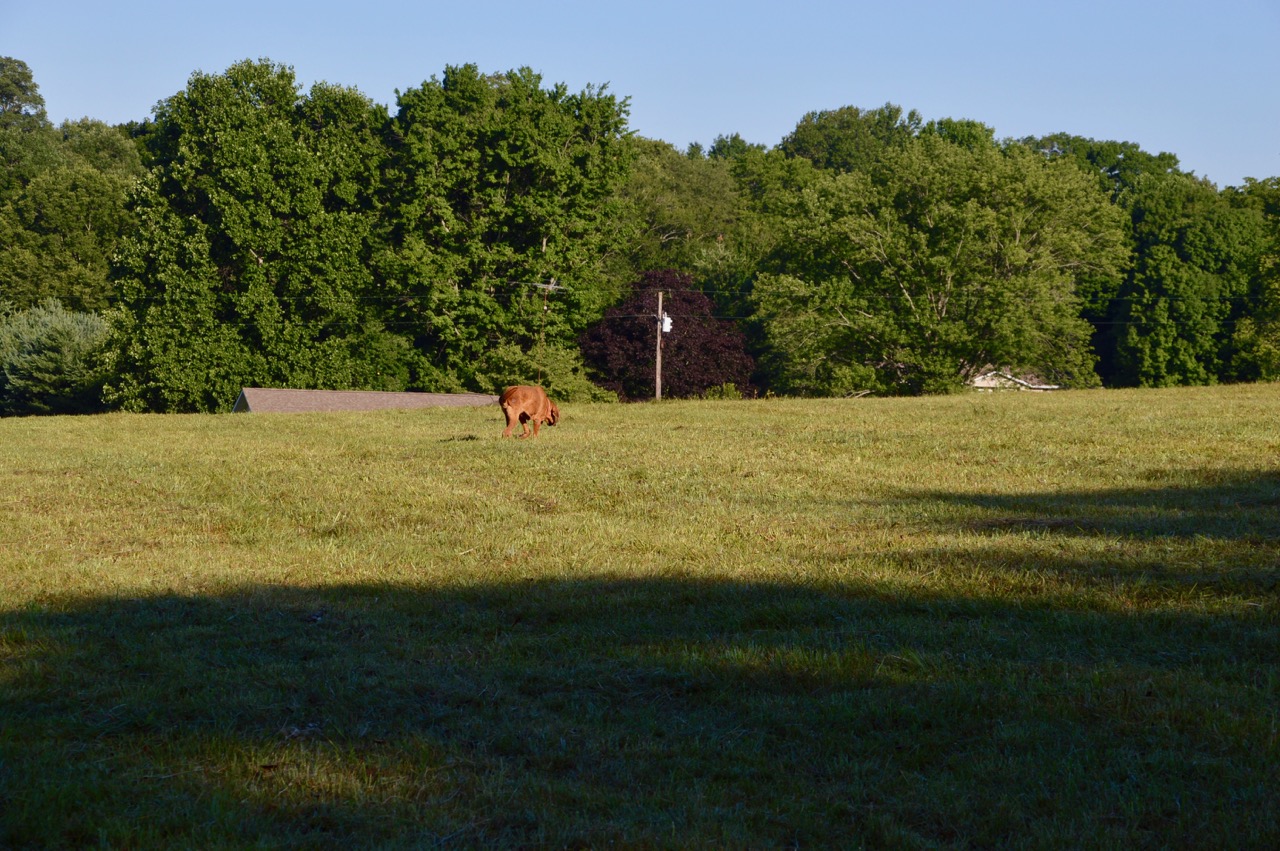 Most of the time, even when they bale the field twice in the summer, they normally get 16-18 of these rolls of hay. They normally haul it away after it is rolled but it looks like they will store it here until their next cut in the fall or pull it as they need it next winter. 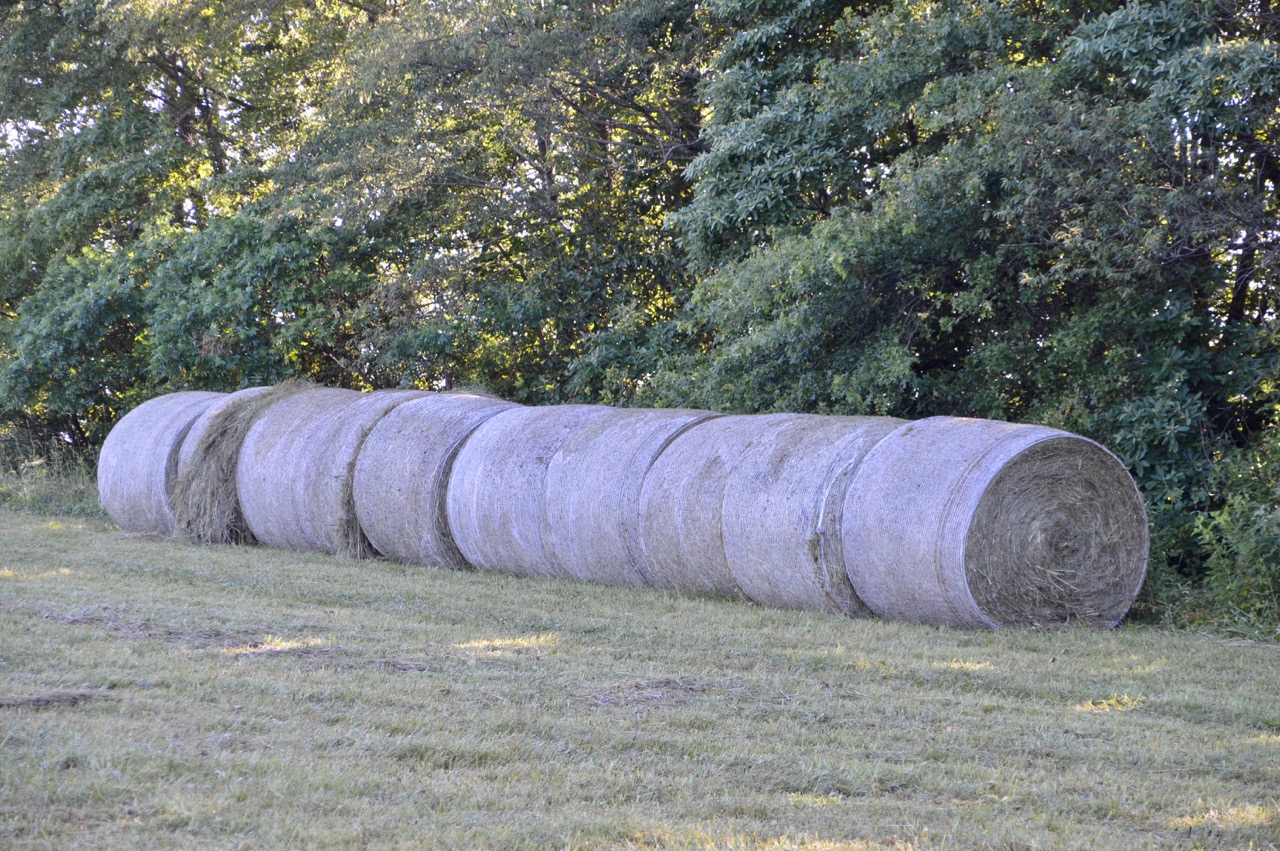 Once Stella glanced up and saw that Sadie was busy with what she found, she started walking in our direction without me yelling her name. What I missed was her running. 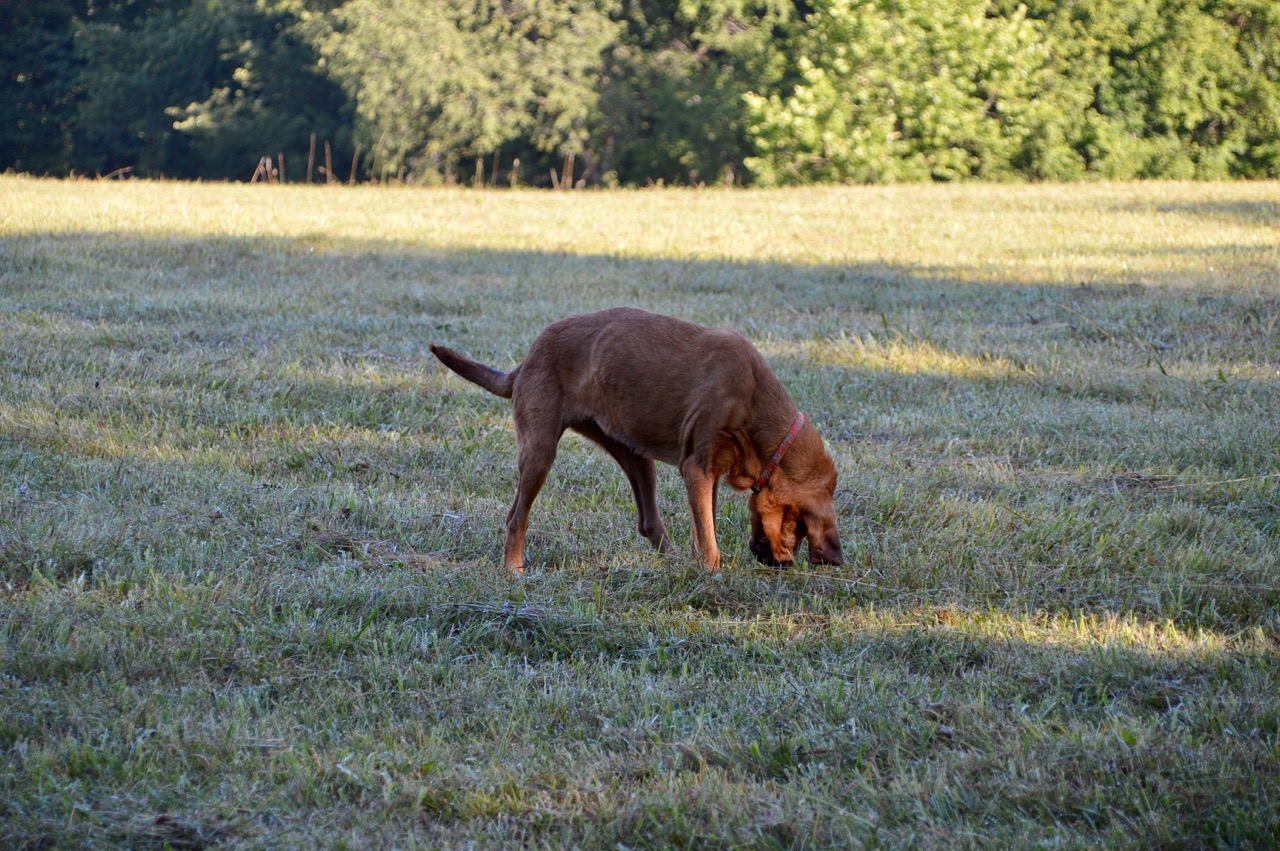 While I was taking a picture of the busted roll of hay, Stella had RAN from the middle of the field to the corner of this hay in the short time I took the picture. 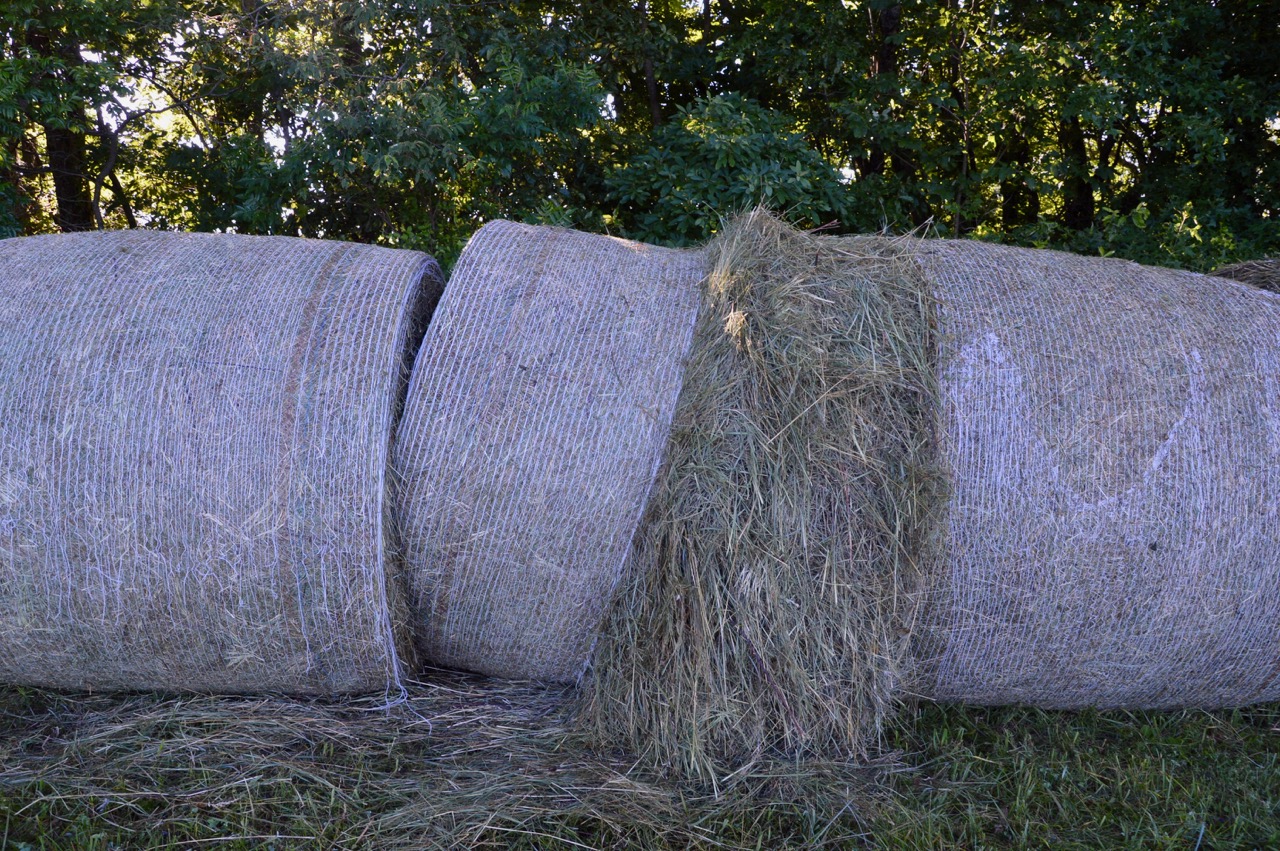 Then it was back to 'noses to the ground' for each of them. I am sure that deer use this path to walk from the gully to the woods on the far north side of the field. 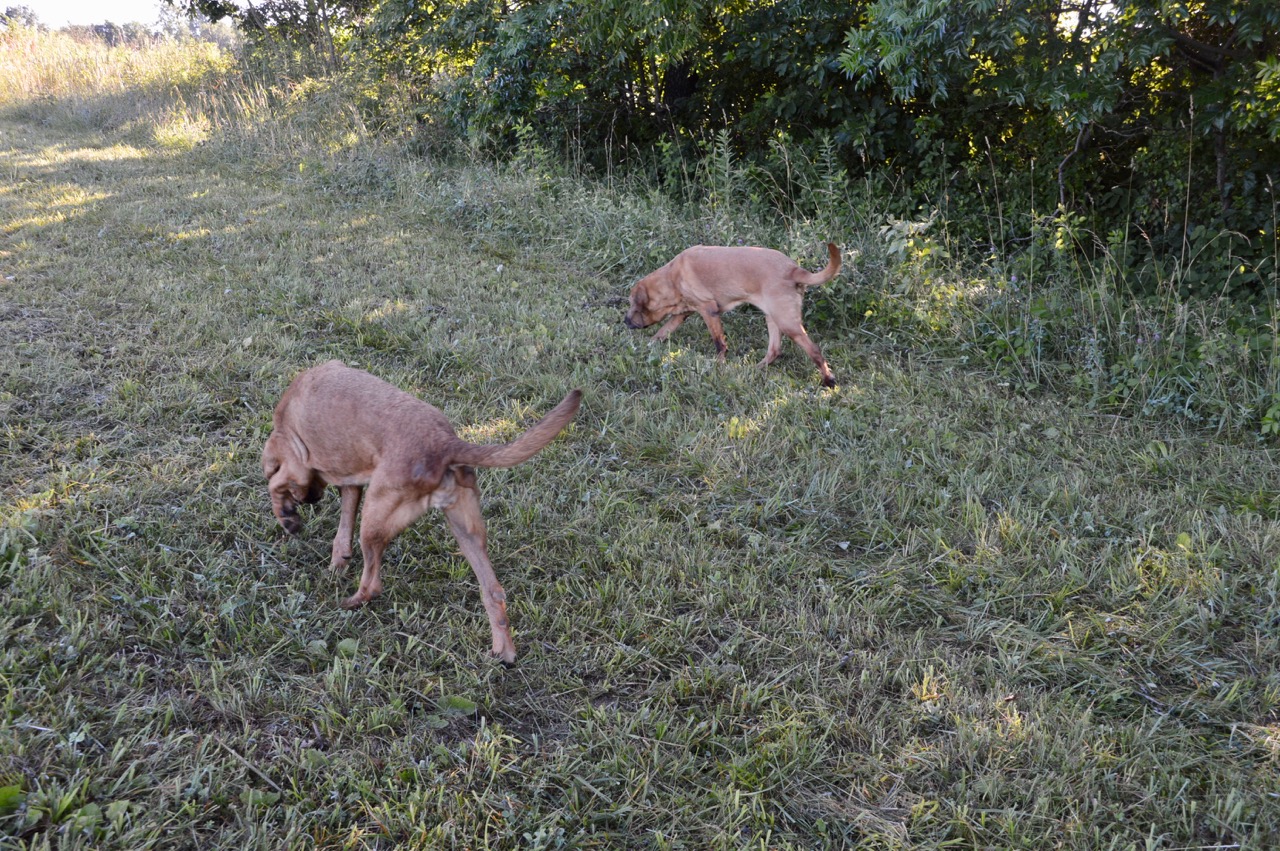 This reminded me of the time times I turn my lawn mower to start a new row and miss part of the taller grass. This is just one of the few spots in 7 acres that he missed with his much larger mower. 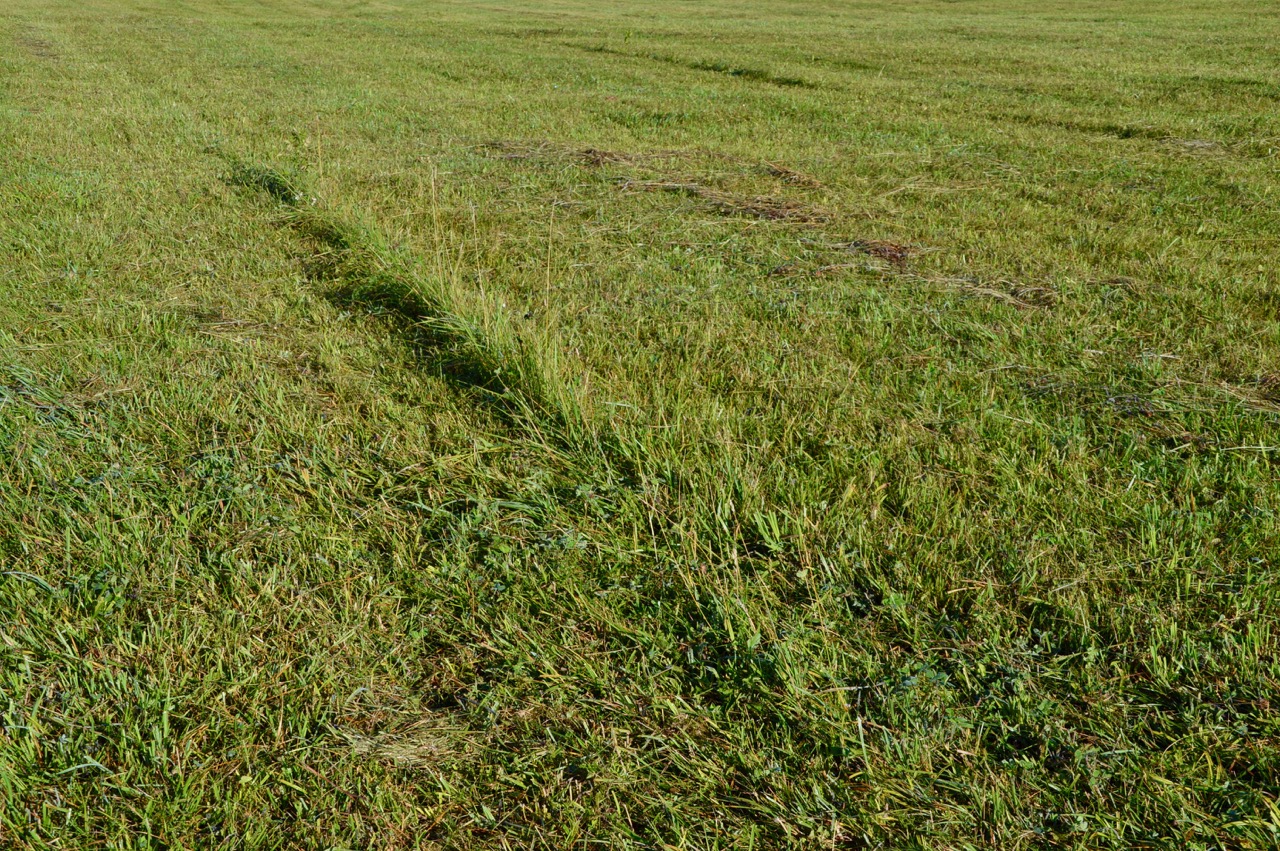 Sadie took off almost trotting on a scent she had found. She was not into chasing sparrows today because just outside the left edge of this picture there were 5-10 sparrows on the ground having breakfast. A few days ago Sadie would have sprinted after them but today her interest was somewhere else. 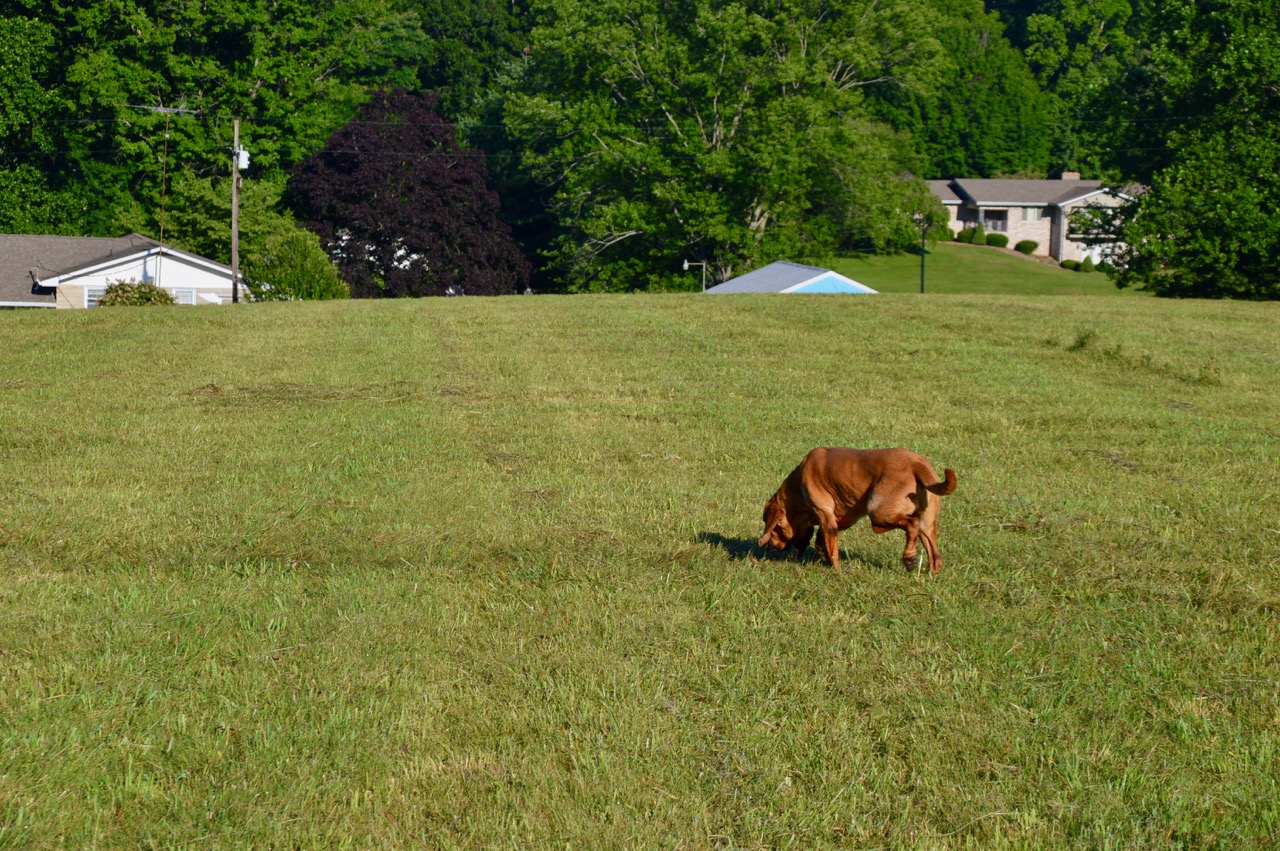 While Sadie and I walked toward the house, Stella was heading for the 'no fly zone'. I was sure she was headed for the woods. If that were to happen I would have had to go get her and lead her back to the house. 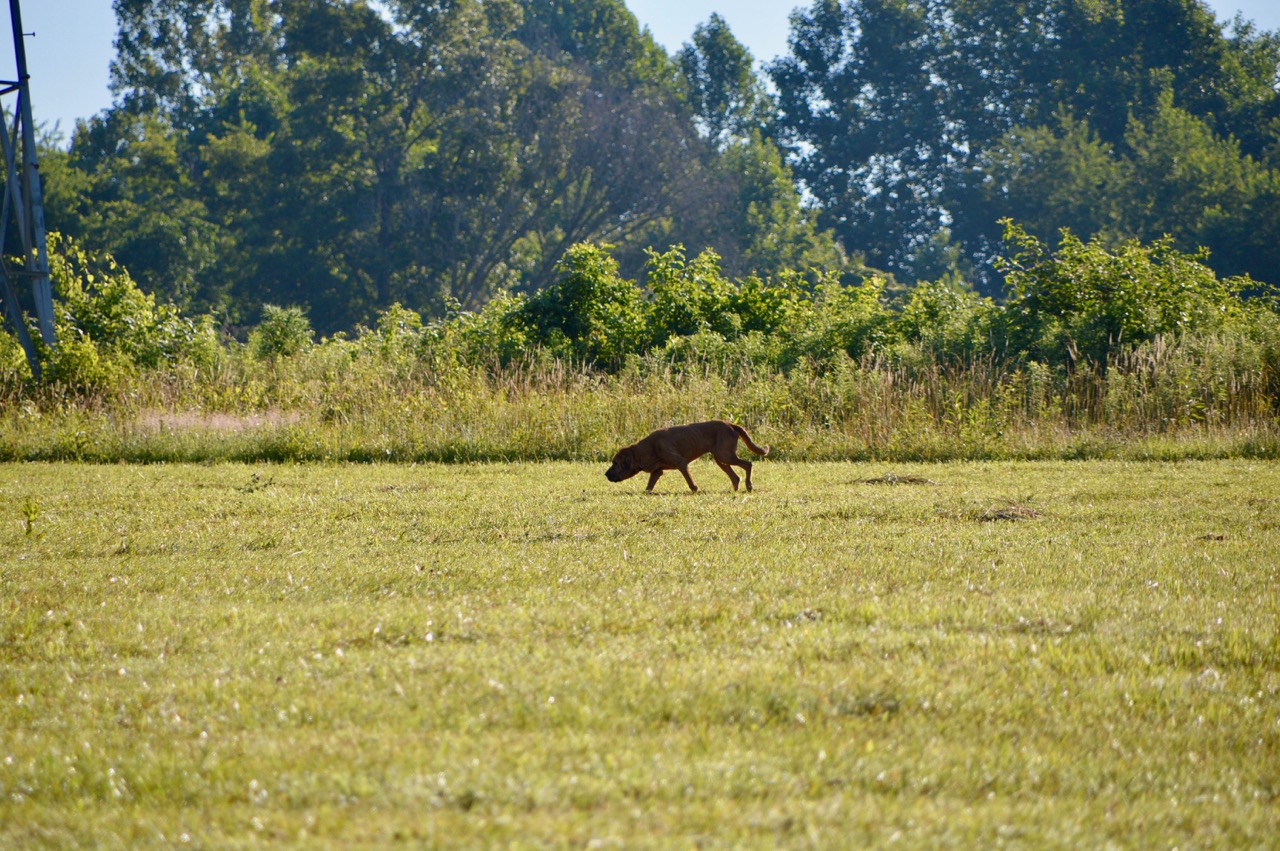 Back to my 'to do' list, I never worry about what I get done or don't get done. It will all be completed eventually but only when I feel like doing the type of work I will need to do. I'll have a major rush to get things done before last week of August when a new college football season starts. 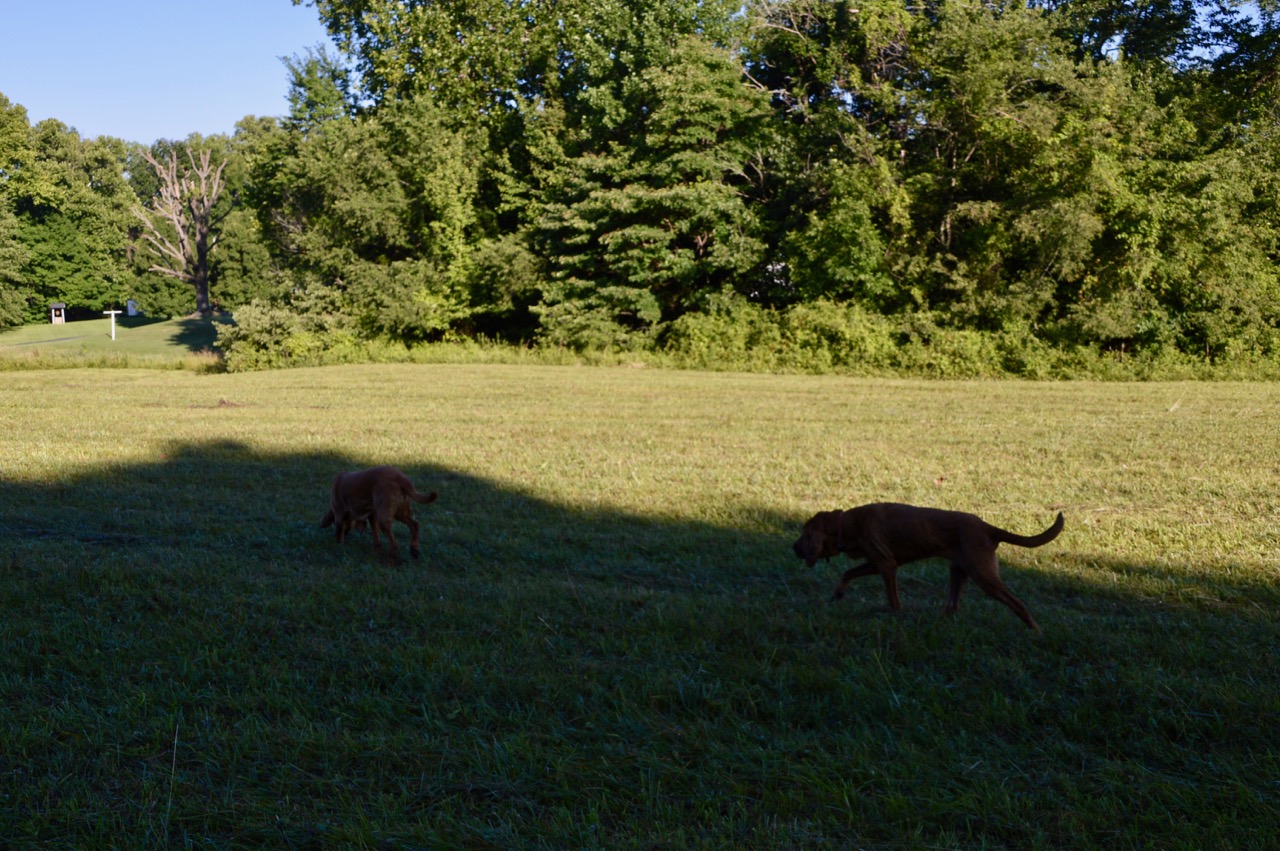 It took a while and even longer than I had planned but Sadie and Stella finally made it back to the yard. They spent almost the same amount of time at the end of the walk in the area behind the house as it took for me to complete the walk. 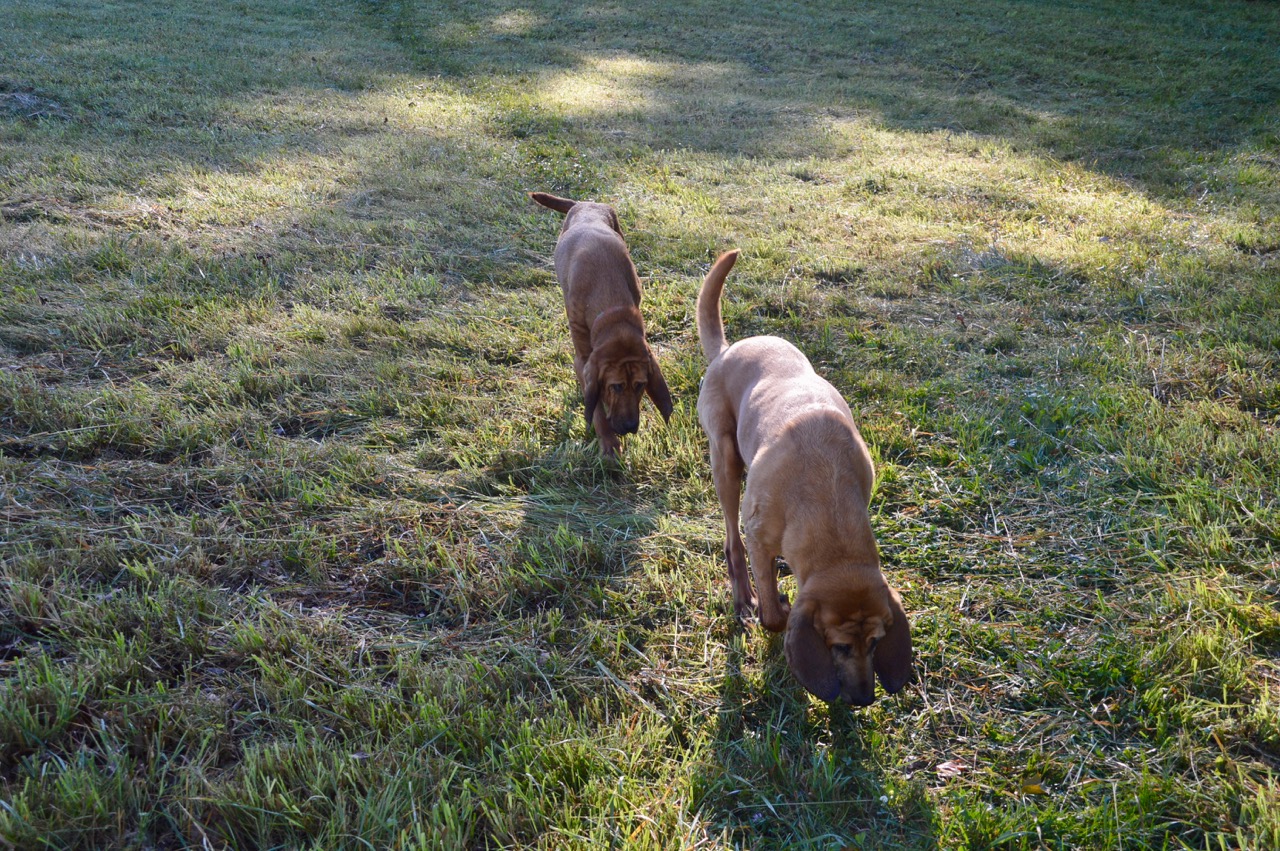 With the fantastic weather we have been having I am back to picking up three different books to read and most of that reading is outside. With the disappearance of gnats, bugs and a few mosquitoes, the hounds have time to roam the field right behind the house and I can keep an eye on them while I read.

I've recently been cutting my time on the computer way below my daily limit of data. That daily limit I set on my spreadsheet stretches that 20Gb of data evenly over the 30-31 day period. Currently I have about 1.2 Gb's in the bank based on my decreased usage.

Besides my normal sports reading, Twitter, Facebook ... I've took a look at houses for sale the other day on Zillow and Realtor sites. There are 4-5 towns out west that have always interested me with 2 of them places I have lived in the past. Nothing excites me too much in the housing market.

Even though I really like my Mini Cooper Countryman I still look at what FJ's are for sale in a radius of 250 miles from home. Many to choose from but very very few have the same options I had with my blue one. I still will not make any trade until I decide when I travel and what I want to use as far as trailers. Nothing has changed my mind about traveling with the hounds.

Traveling with two bassets and one bloodhound wasn't that bad but hard. Two bloodhounds would make that impossible. I knew that and analyzed that before I decided to pick up Stella and bring her home. I could walk Winston and Heidi with a "splitter" and one leash. When I have tried that here with Sadie and Stella ... it didn't work and was a total disaster each time I tried it.

I have a few more weeds to cut along the driveway this afternoon. It is so tempting to buy and spray weed killer and make that all so easy but I don't want any chance of that getting on the paws of the hounds or in the air. So I will continue to cut them as low as possible with my weed eater and let the sun kill them.

I cannot believe how long this fantastic weather has lasted here in 'the tropics' of Southern Indiana.
at June 27, 2017
Email ThisBlogThis!Share to TwitterShare to FacebookShare to Pinterest
Labels: Hay Field, Stella's Freedom, The Daily Dog Walk, Weeds