The Hounds Get Their Wish 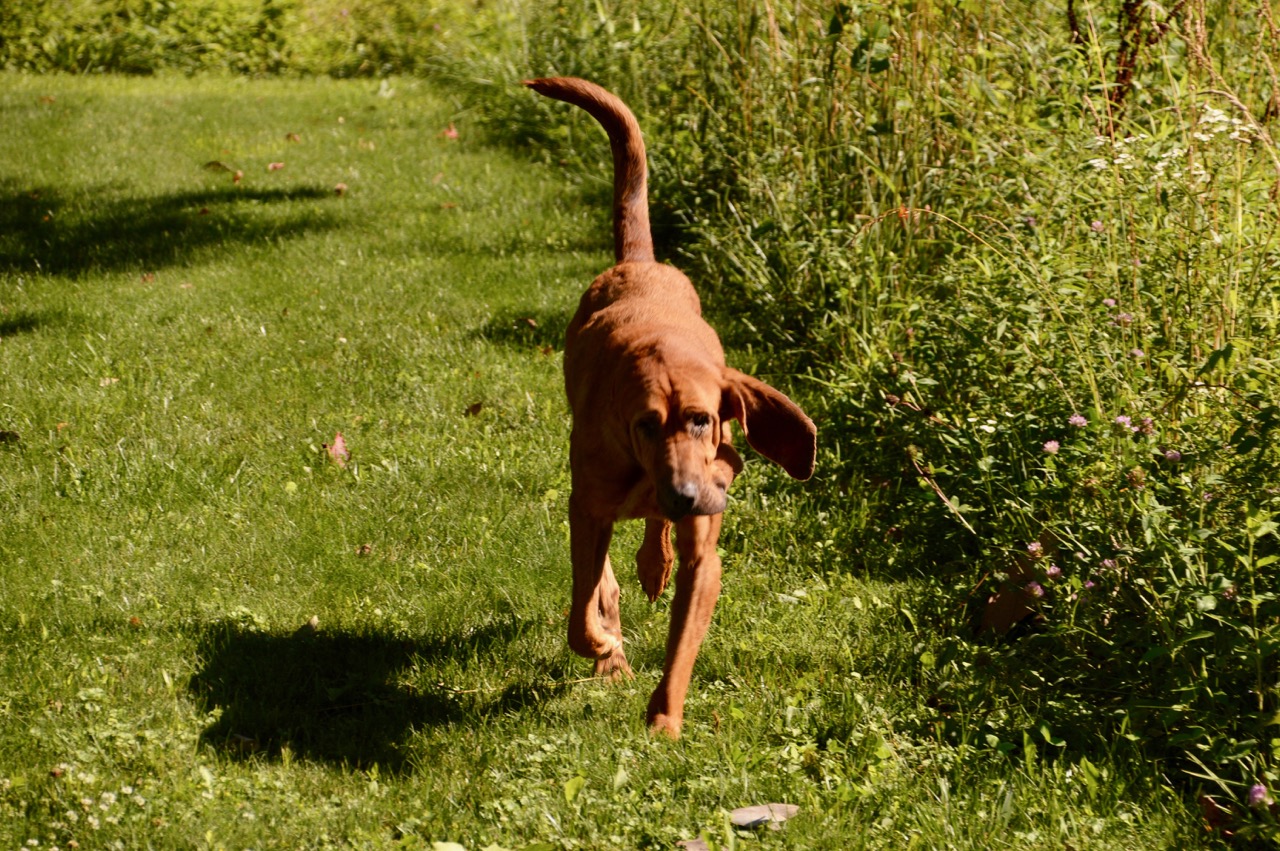 I heard the sound of a tractor slowing down on the highway from my computer desk this morning. It looked like the farmer that bales the field behind the house but they were going the opposite direction for getting into the field. The hounds were about to take their first walk of this morning and I never have walked them while they are mowing the field ... I decided to take a chance today. 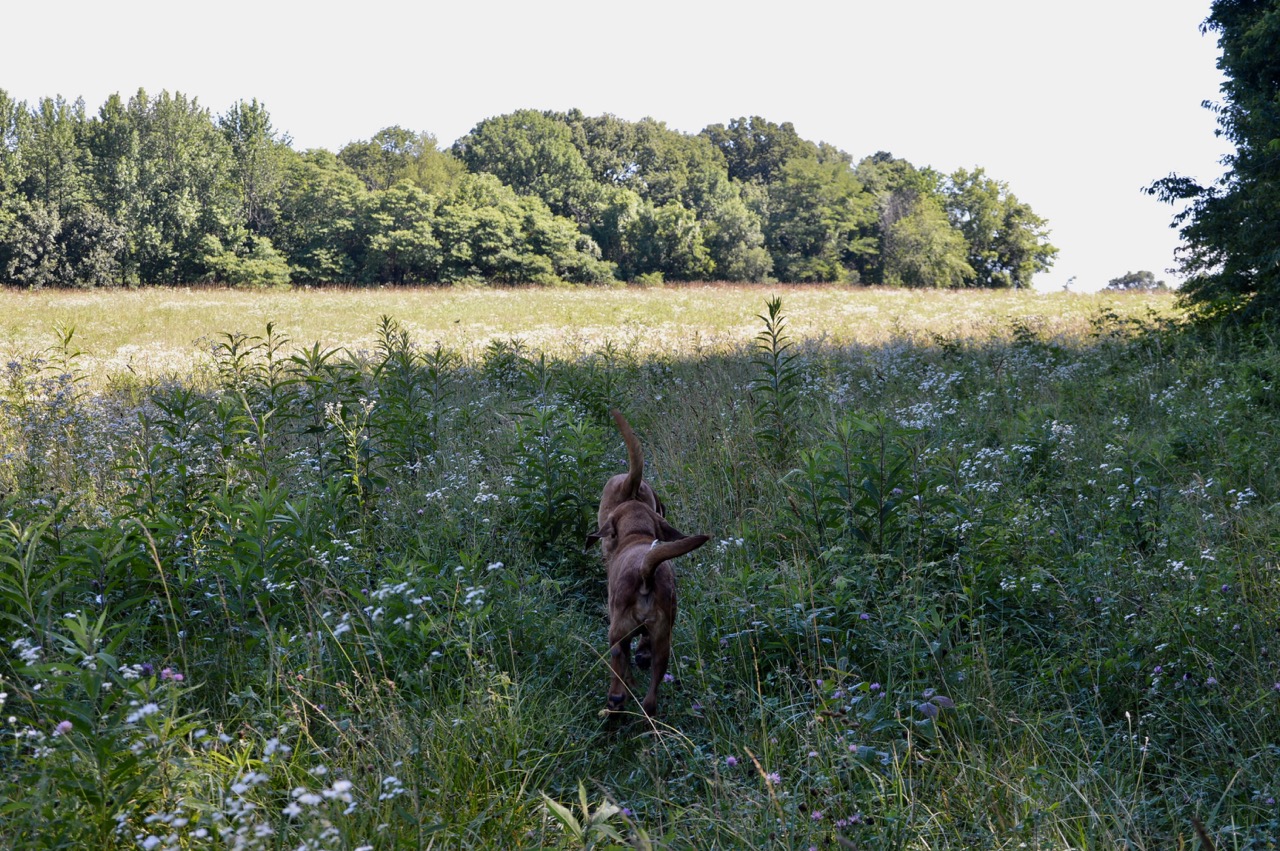 About the time I had changed into my hiking boots and stepped outside into sunshine for the first time in two days, I saw the old tractor with the mower on the back, making a turn to head past the house heading north. From the sounds I heard as we started out walk, it certainly sounded as if the field was going to get mowed today. Stella didn't show a lot of reaction to the noise but Sadie was more than curious. 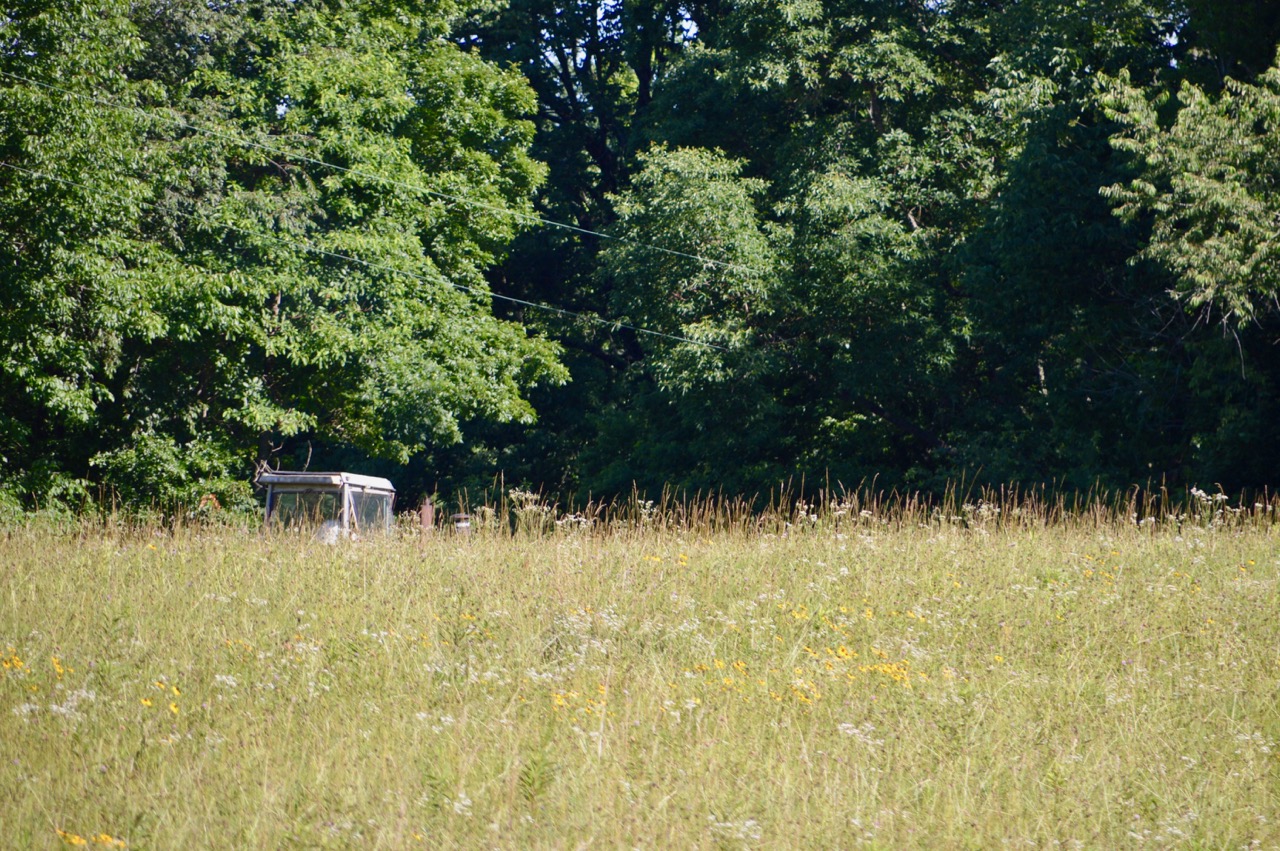 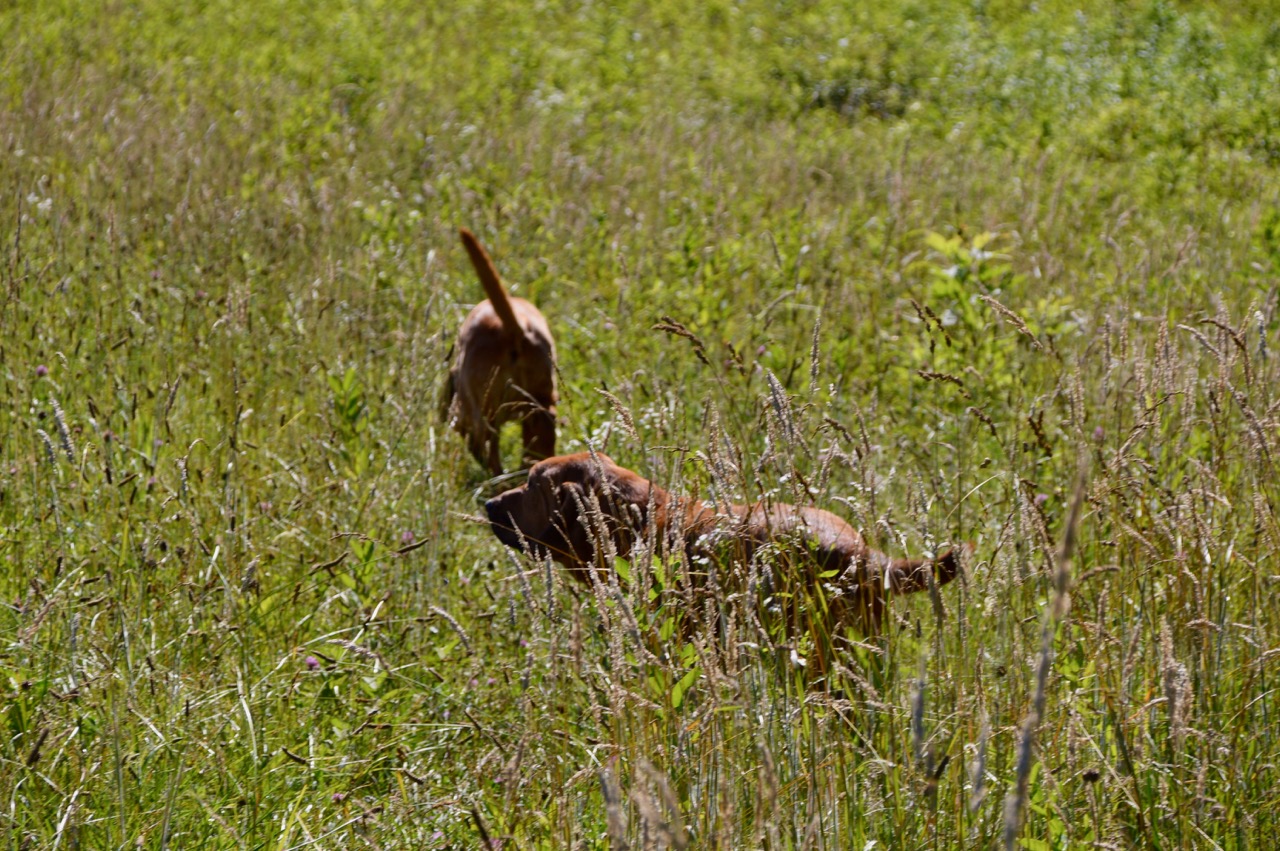 At this time both hounds were off leash but I had the 6' standard leash in my back pocket for Stella. I was pretty sure what Sadie would do but not Stella, once the tractor drew near. Like many of you, he wanted to see the hounds. So right after he went around the edge of the "far right corner", he pulled his mower up off the ground and started driving our way. 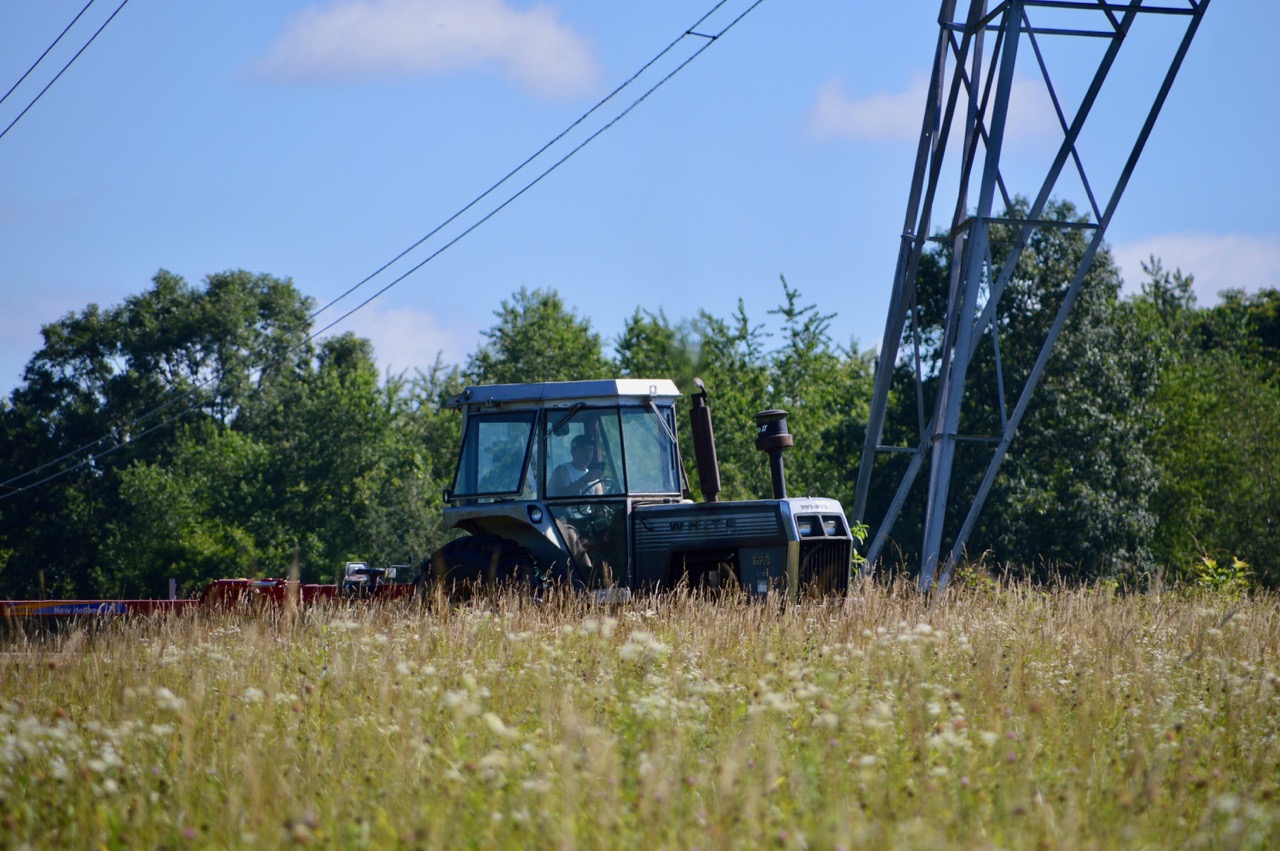 Am I seeing this correctly? Reading a text from his smart phone while mowing the field???   LOL 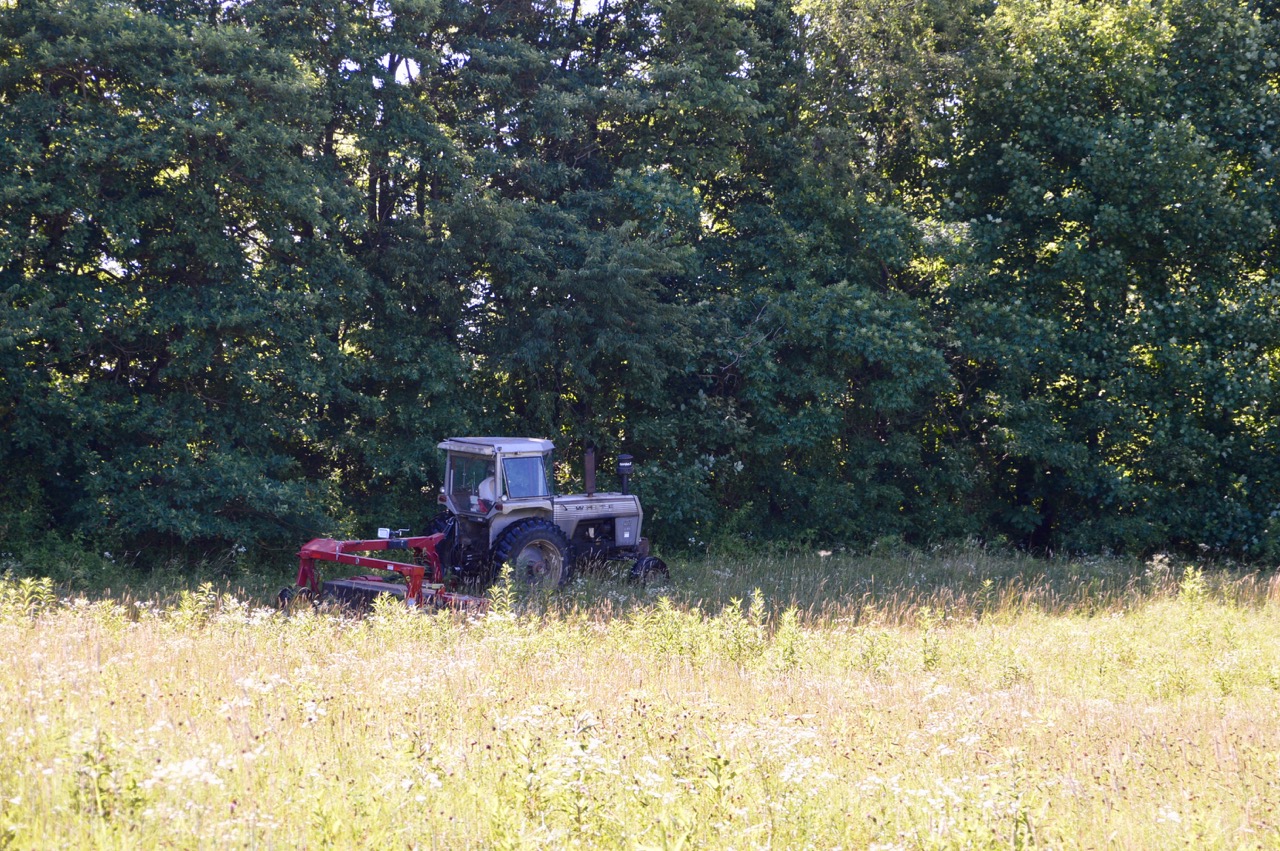 Mowing along the back edge of the field almost to the far right corner. 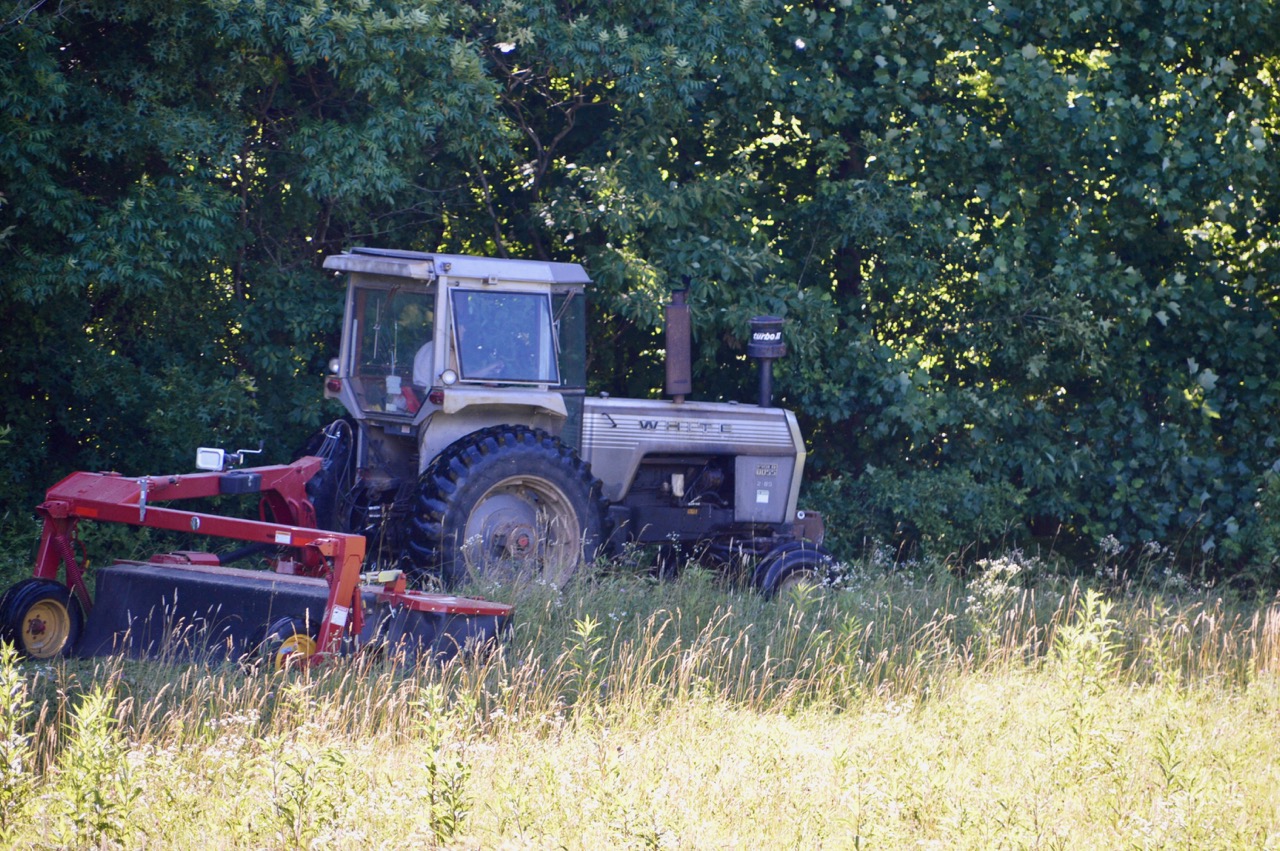 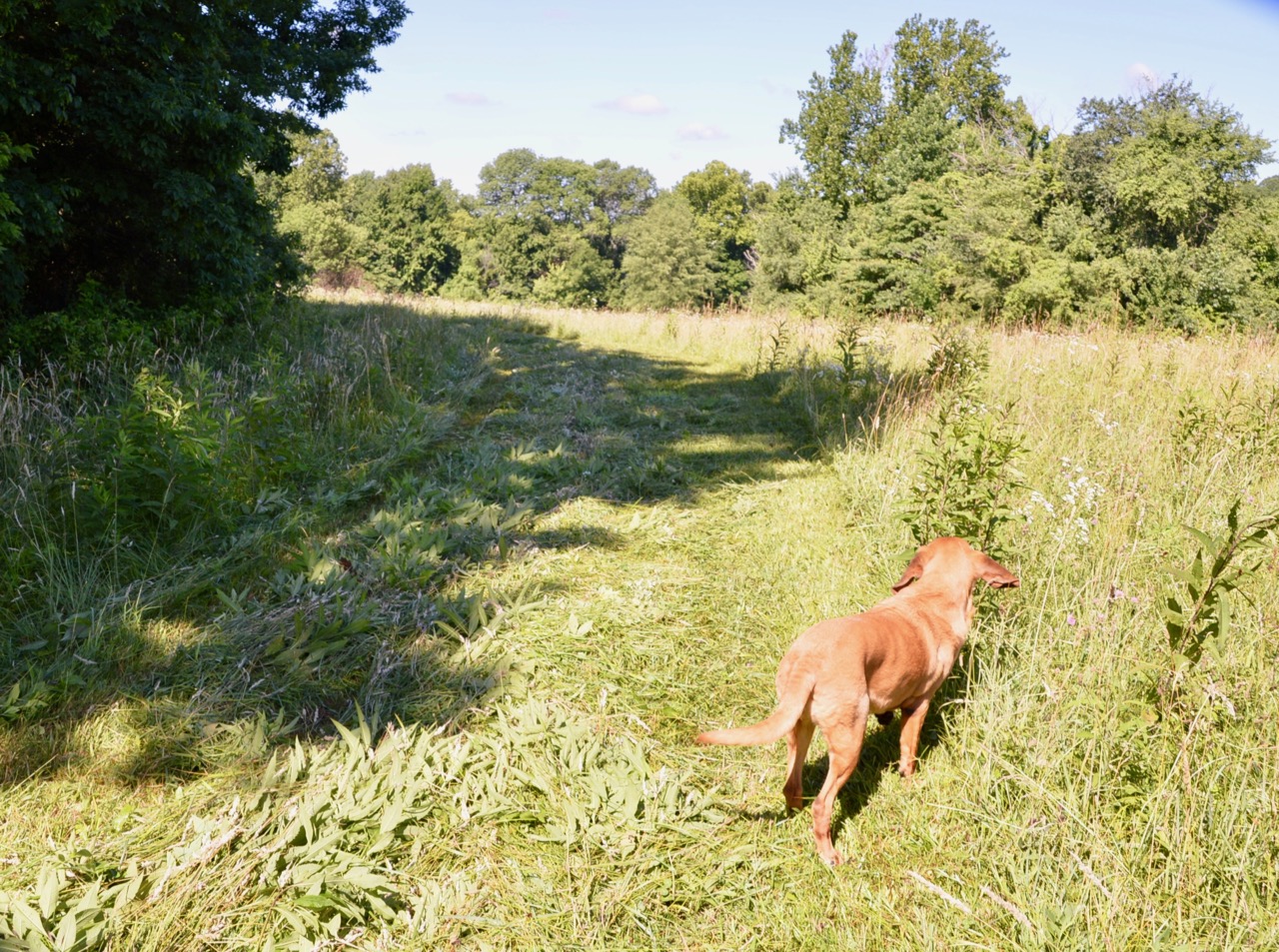 Not only to see the hounds he wanted to know if I had the tether attached to the 'spike in the ground' so he would not mow over it. They always check with me every time before they mow along the backyard. When the tractor was coming right at us as we stood in the middle of the field, Stella sat down next to me and Sadie stood in front of me not really sure that thing was coming towards us. 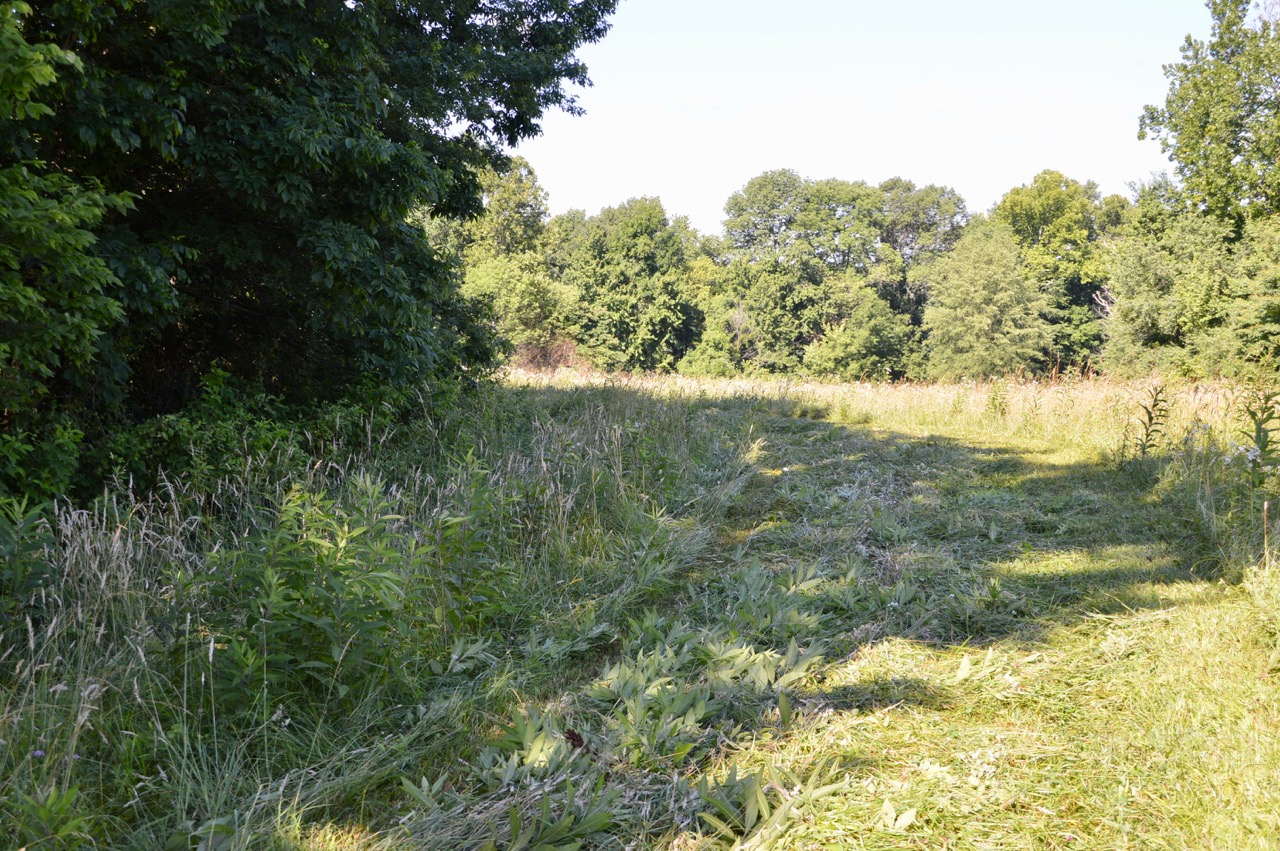 As he pulled away and headed around the first turn, Sadie wanted to run after him but with a loud "no", she trotted back toward me and walked just in front of me. Before the tractor drove over to meet us I had put the leash on Stella's collar. She acted as if she had been around tractors before in her earlier years.

With a nice path mowed why walk through the taller grass on the way home?  It was great to walk on the mowed path of the field. 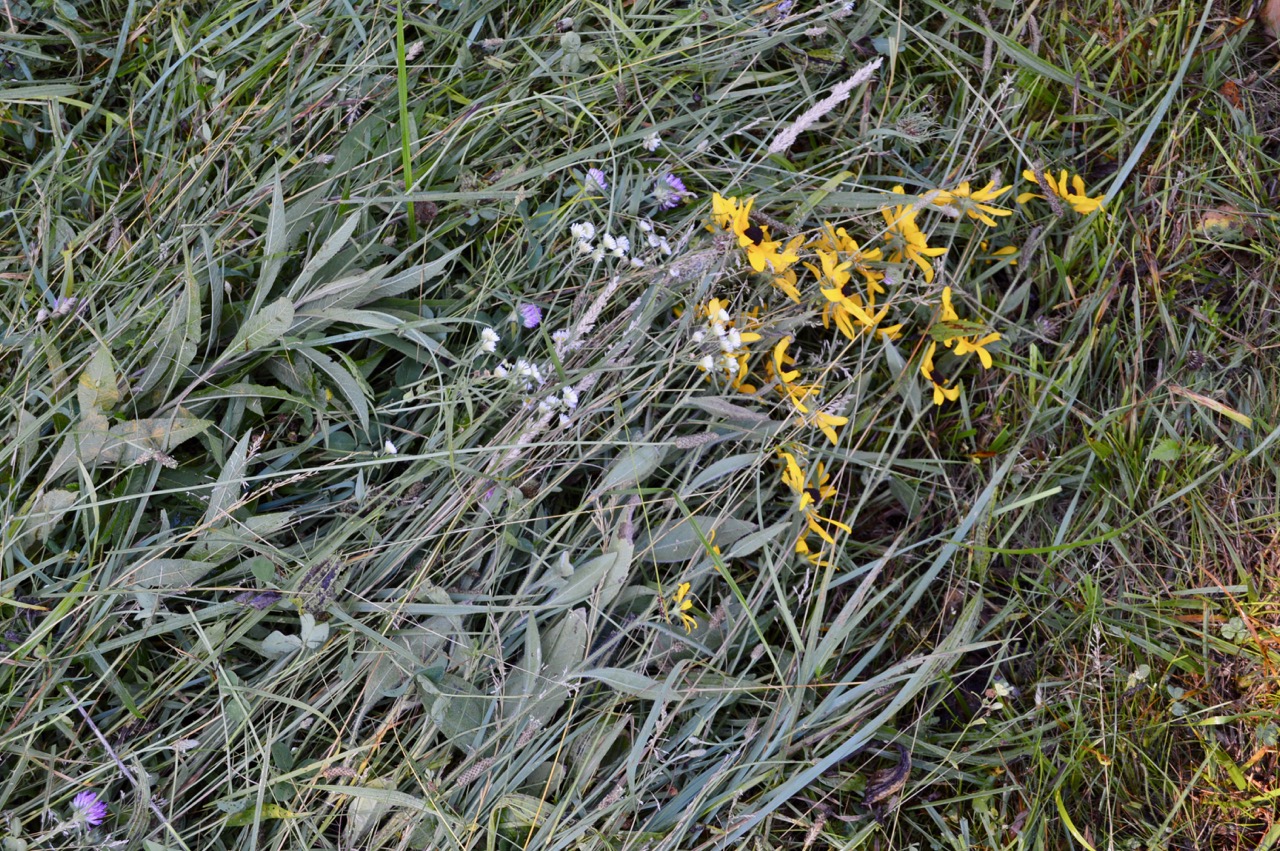 The last of the yellow flowers. It will dry out all day today and rolled into 2,000 pound rolls of hay tomorrow or Monday. 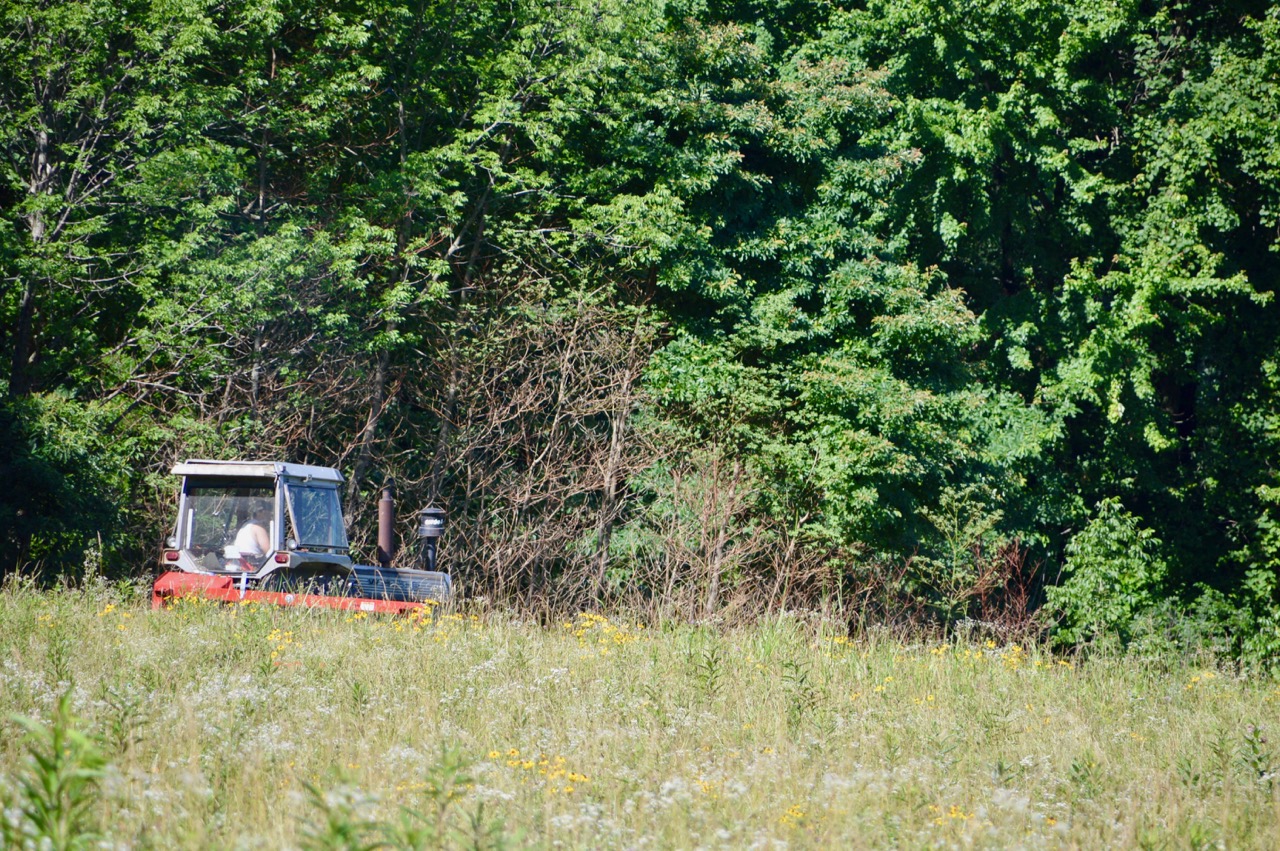 He is over by Stella's all-time favorite place ... the wooded area behind the neighbor's house. 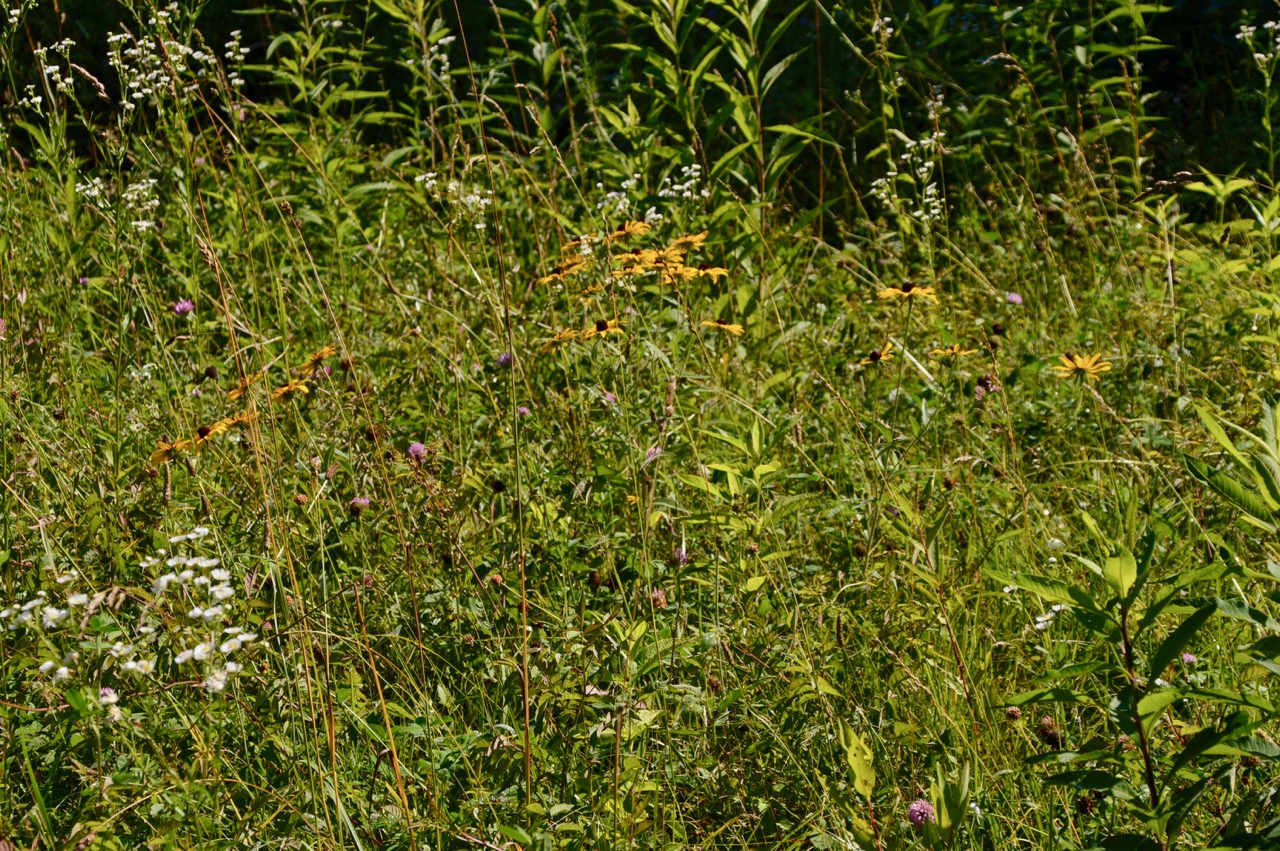 One last look at the flowers before they are mowed. 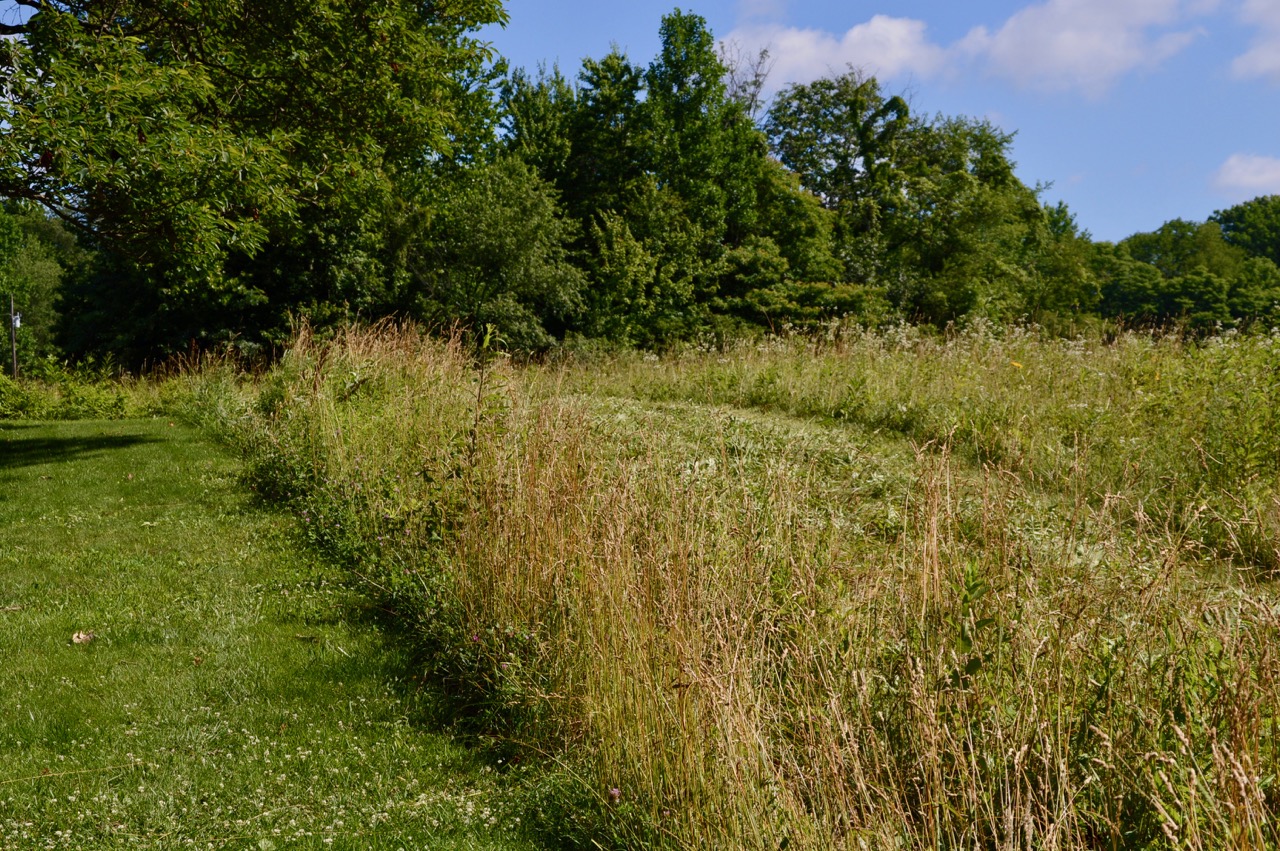 Later on he will come back in the opposite direction to cut the edge of the field, just like trimming your driveway or sidewalk after mowing your yard. 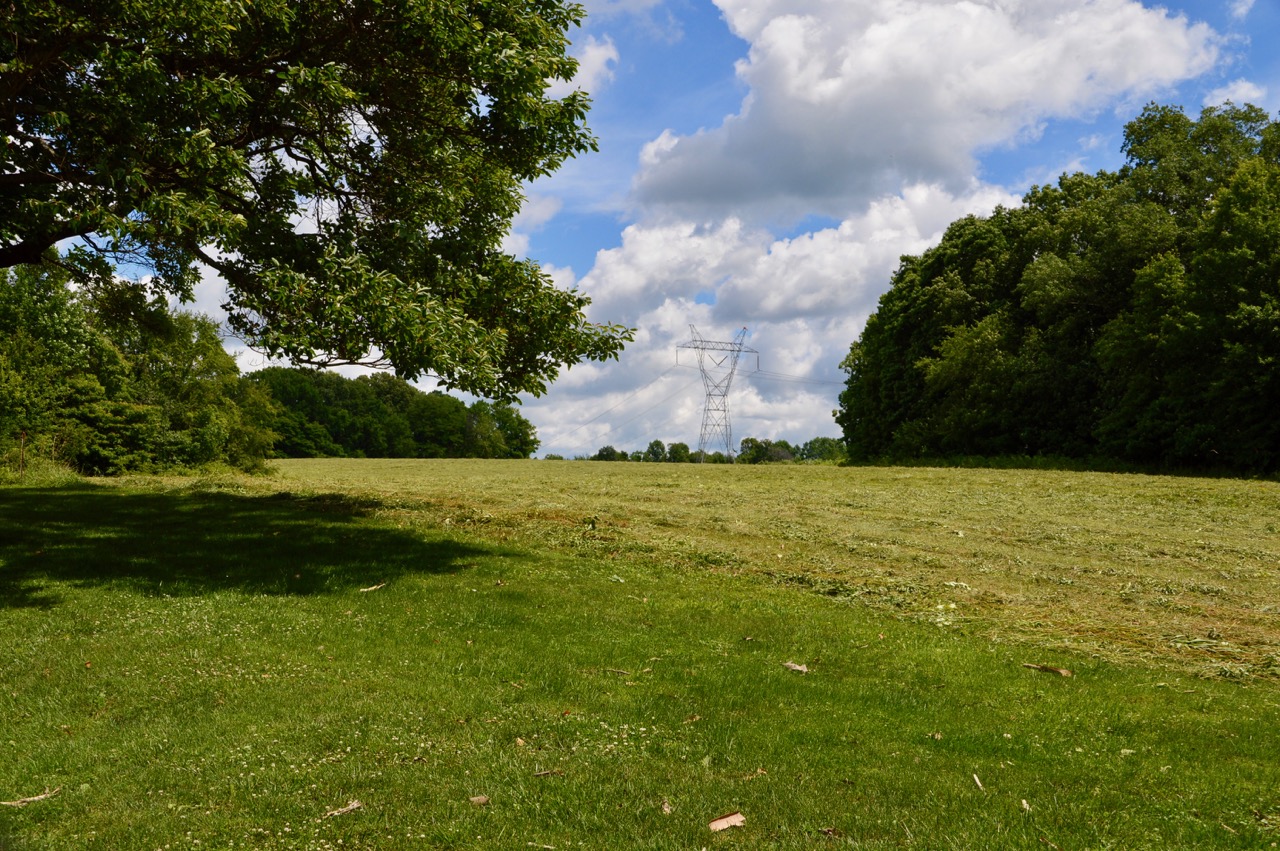 Once he finished cutting the field, since the hounds had their lunch we went outside to enjoy this great weather. It's such a change from the past two days of dark skies and rain. While I cut some weeds, Stella decided to nap under the sun. 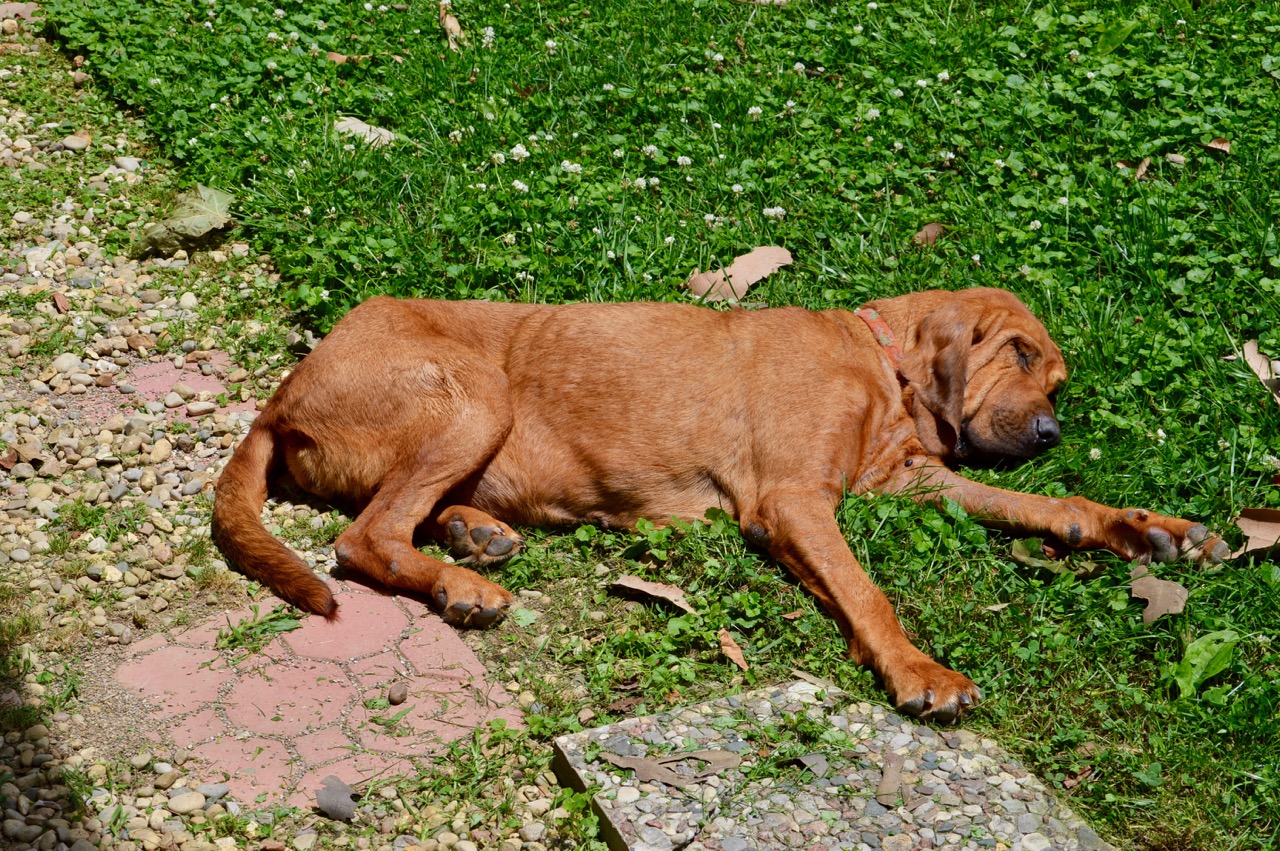 Sadie was more interested in exploring the field now that it was cut. Heidi was laying about a foot away from Stella but out of camera range. Anytime I pointed the camera at her, she would get up and trot away. She might be tired of blogging, who knows? 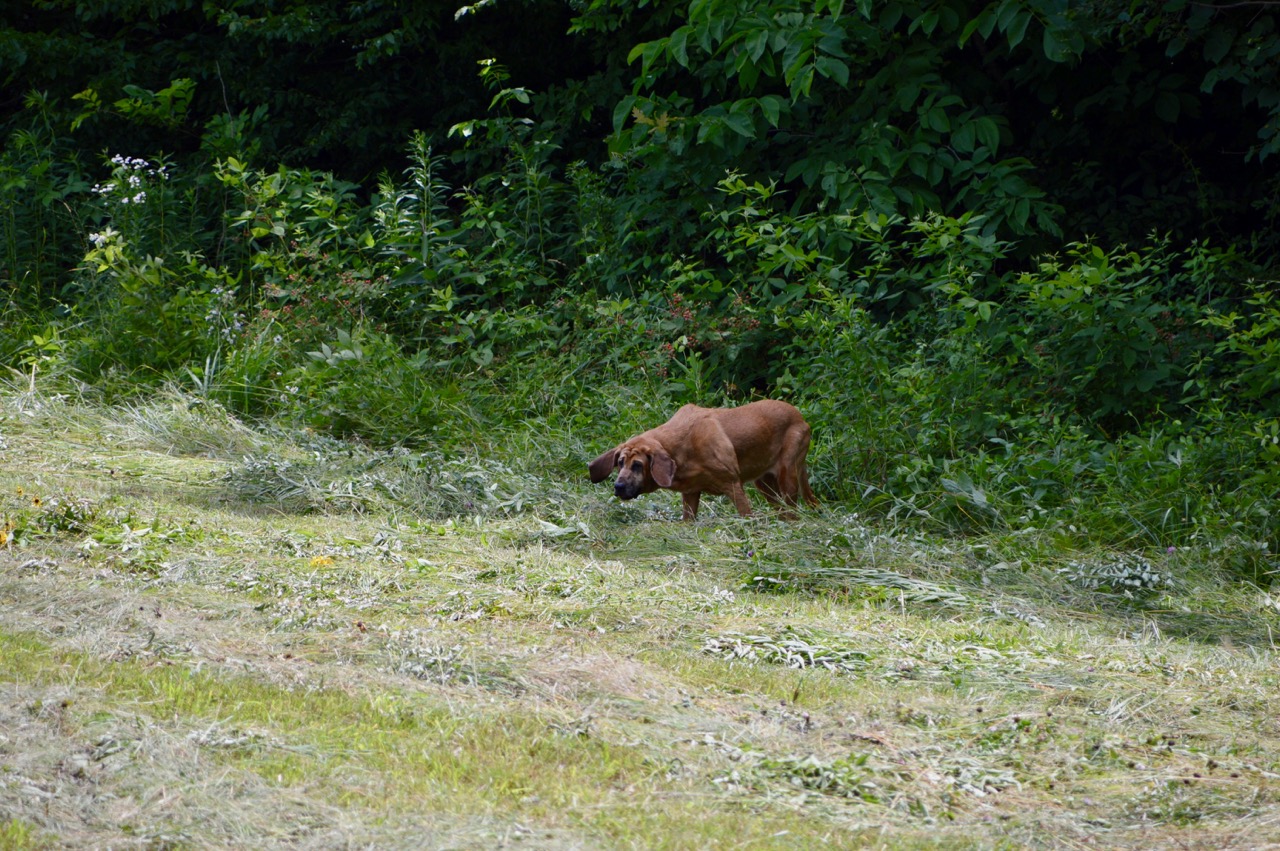 I whacked weeds until my batter died. It was a great time to take our first walk in the mowed field. It makes a lot of difference because I can see where the hounds are at all times plus I find there are less ticks on me after the walk. 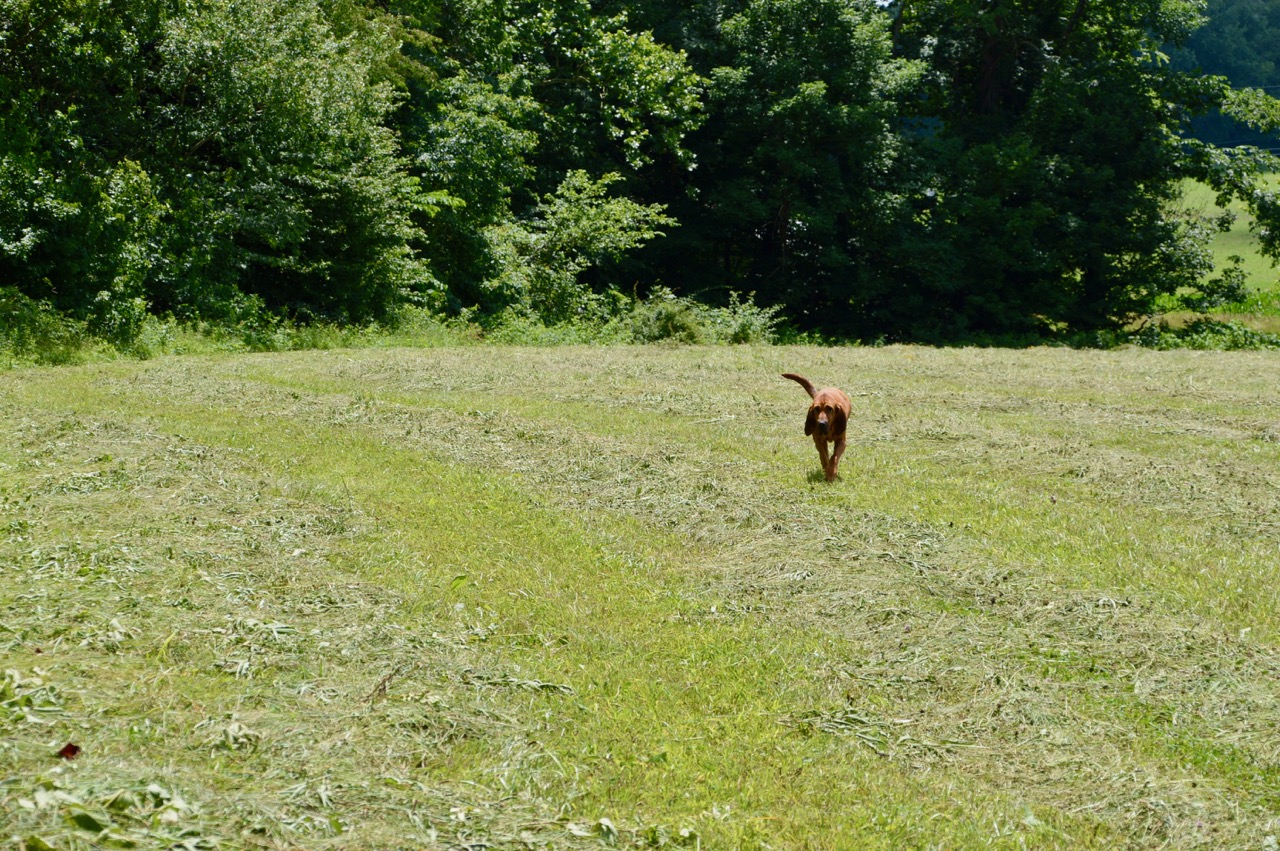 Stella took her time soaking in every inch of mowed grass. 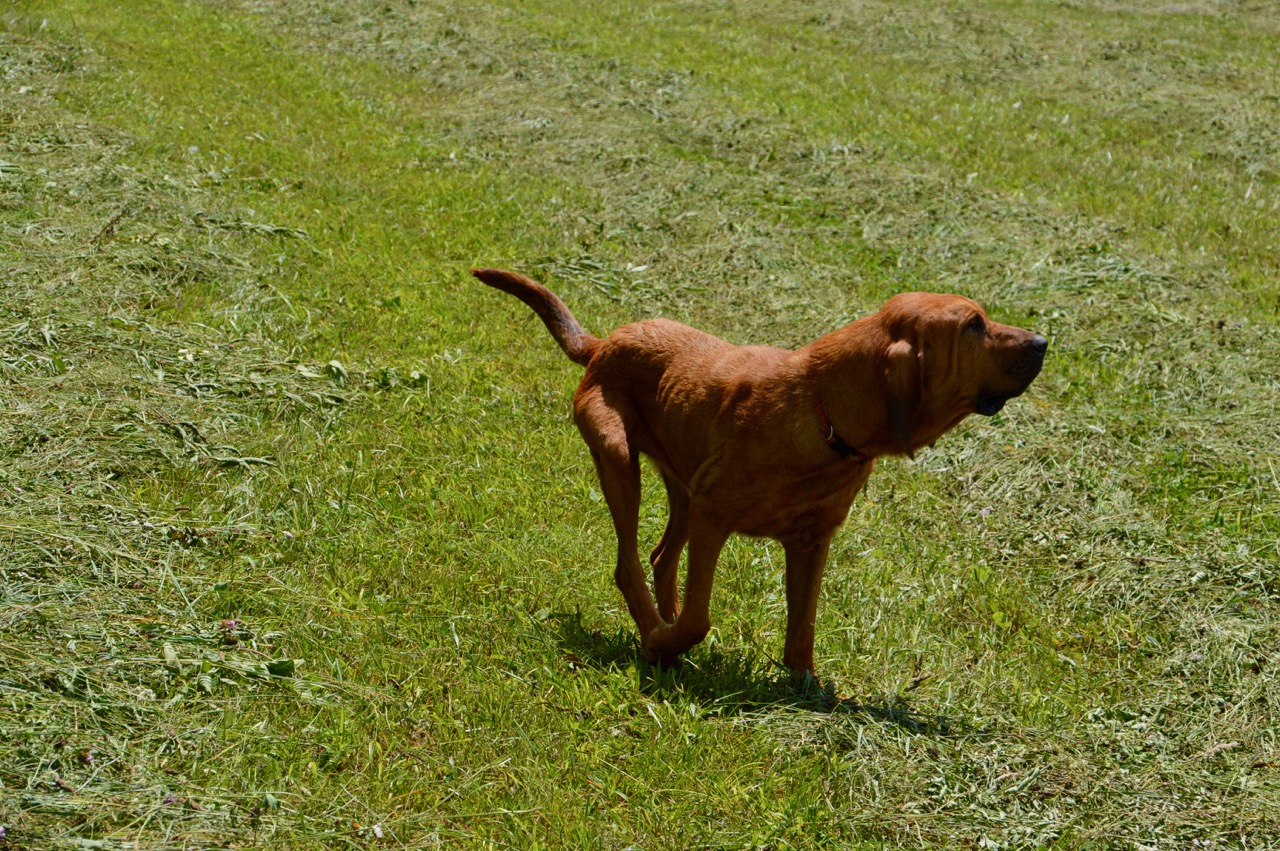 Sadie walked along the very edge of the field and thought there might be a chance to curl up to the far right corner since it was cut. That is where she saw the one deer the other night. 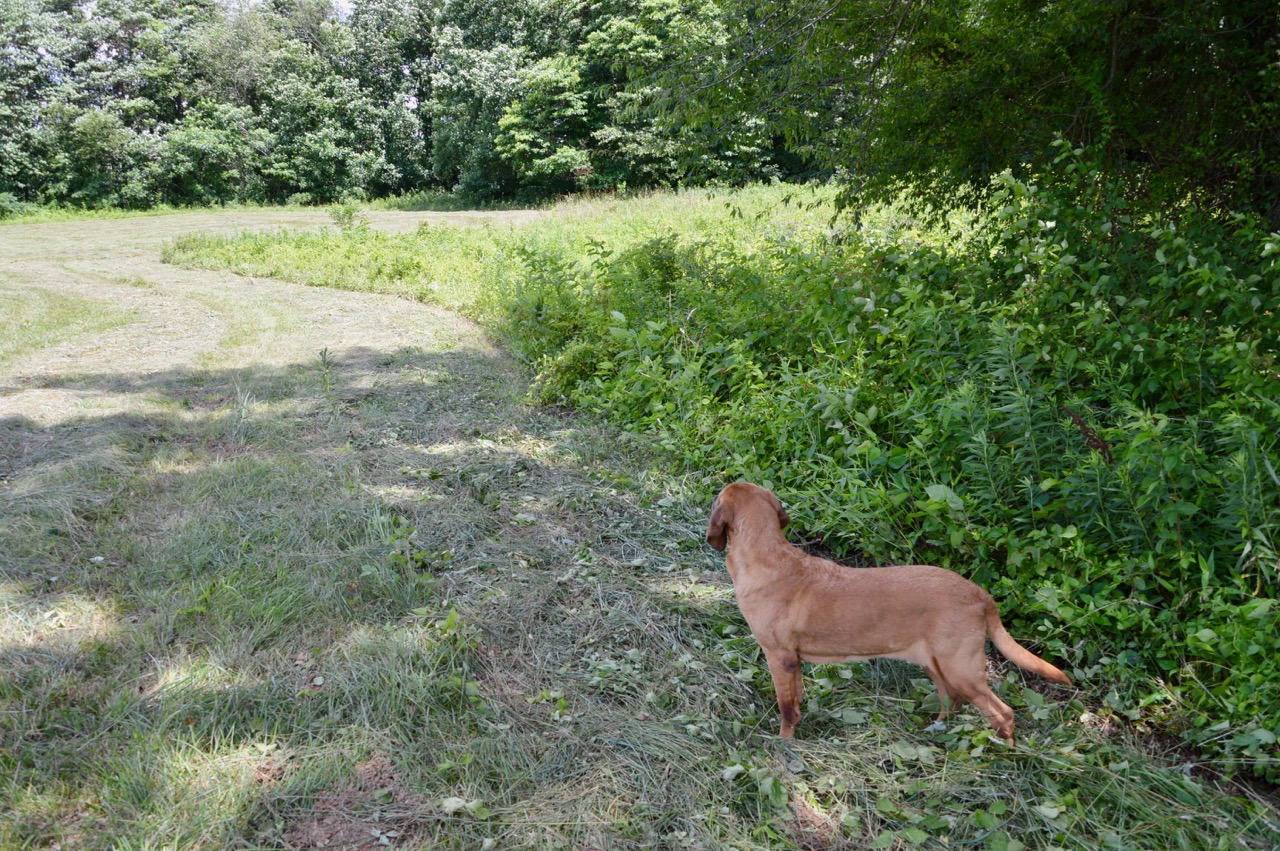 Stella did not run fast but it was more between a run and a trot. She had not been to the far right corner in a while and was happy to head that direction. 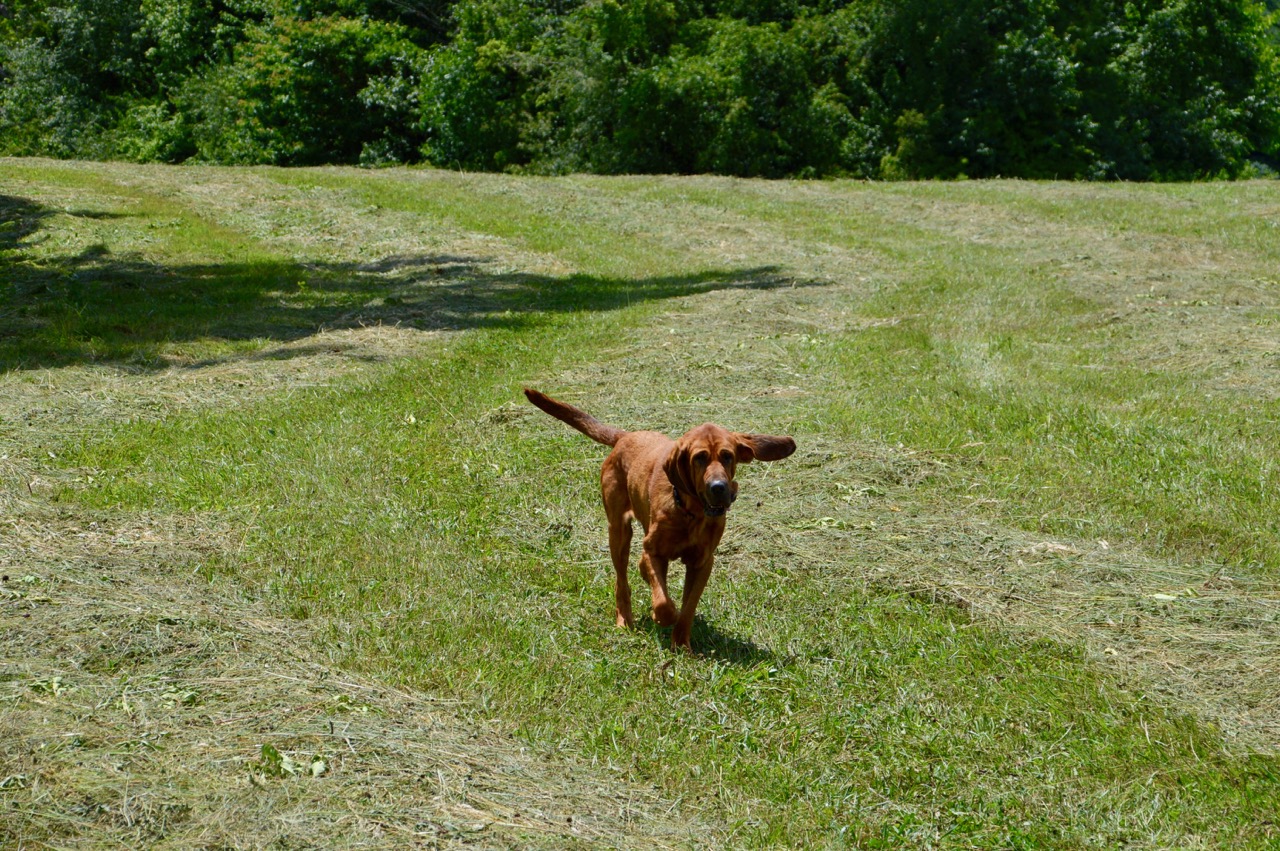 I am hoping now the field is cut that she will start running more like she use to, but that will be up to her. 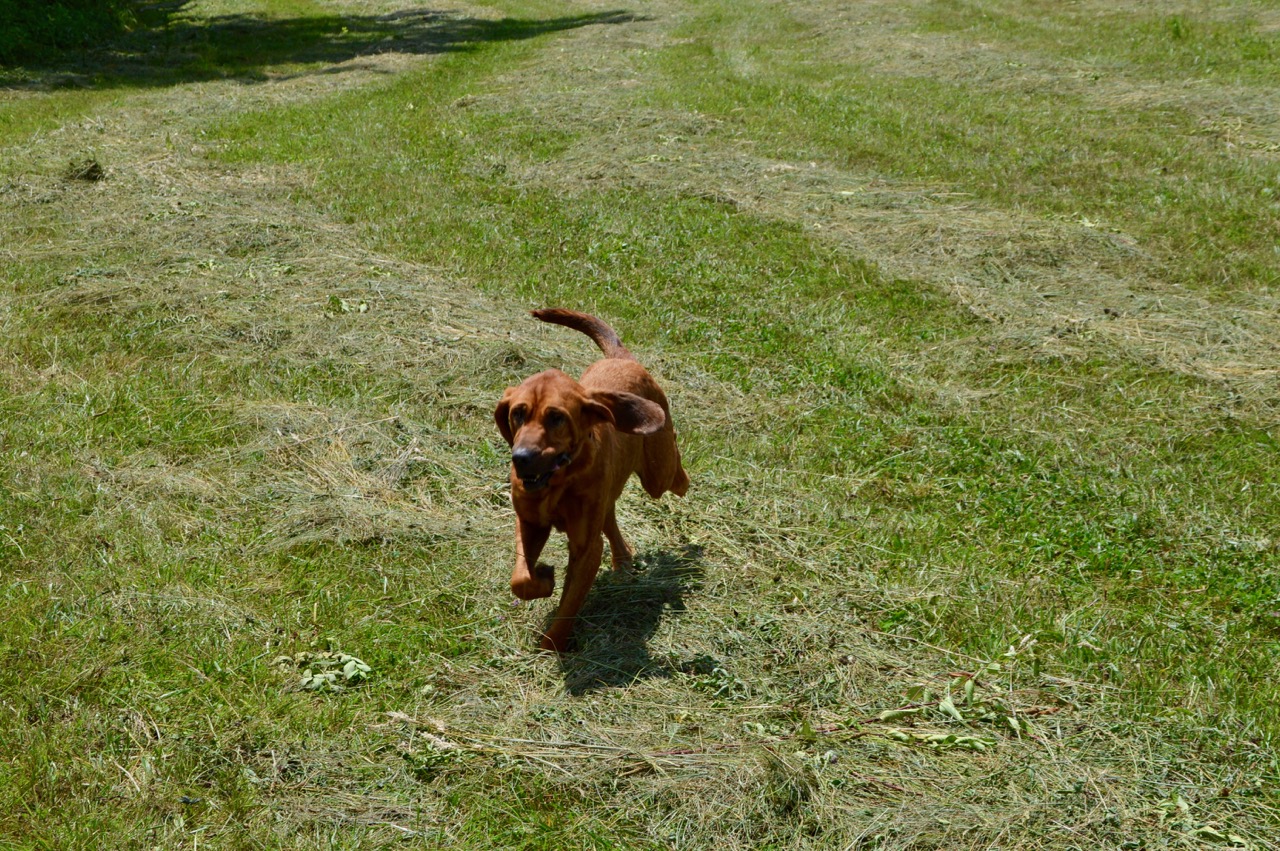 Too many deer scents to walk away. 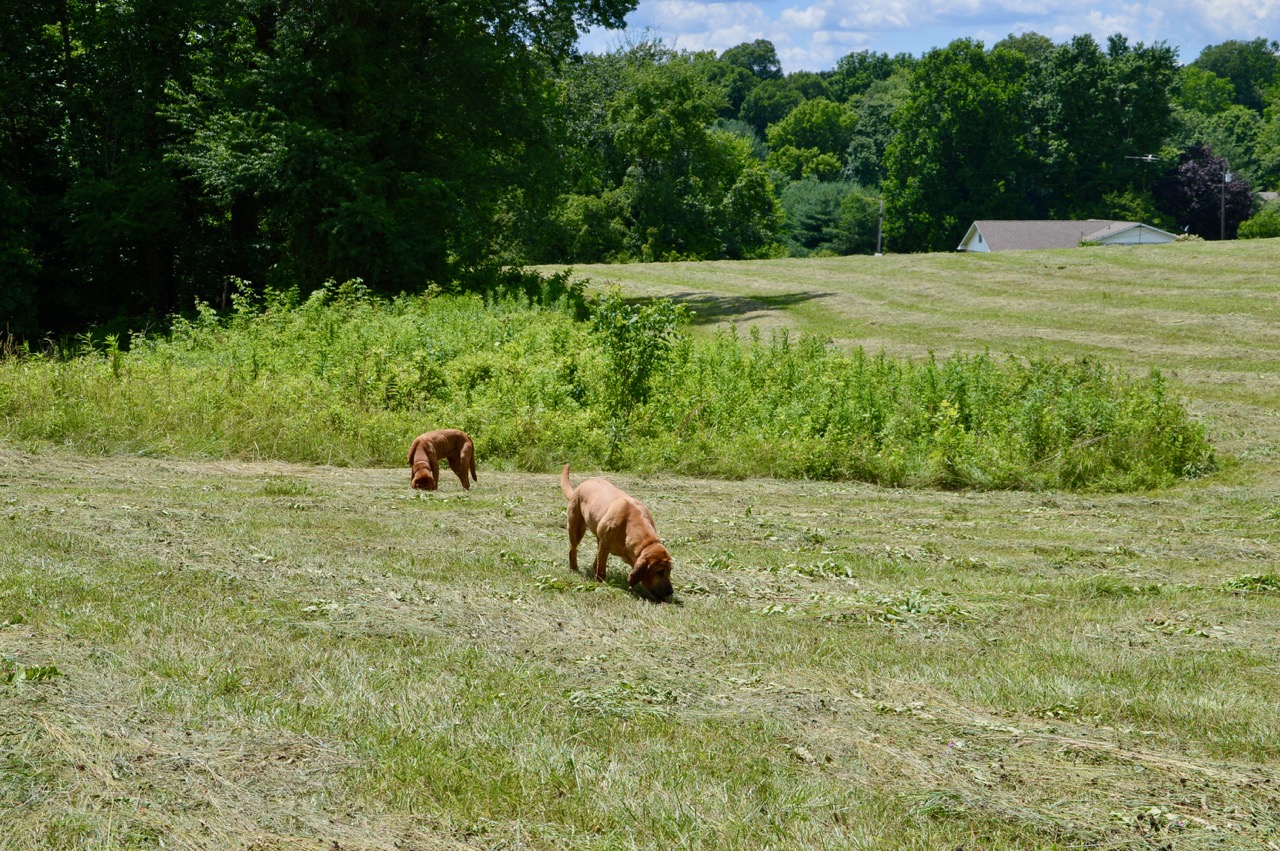 Sadie and I headed off along the back edge of the field following a path created by the mower. I don't want to mess up their rows of hay that will be raked up tomorrow before they bale it ... so we stayed on the same path going out and coming back home. 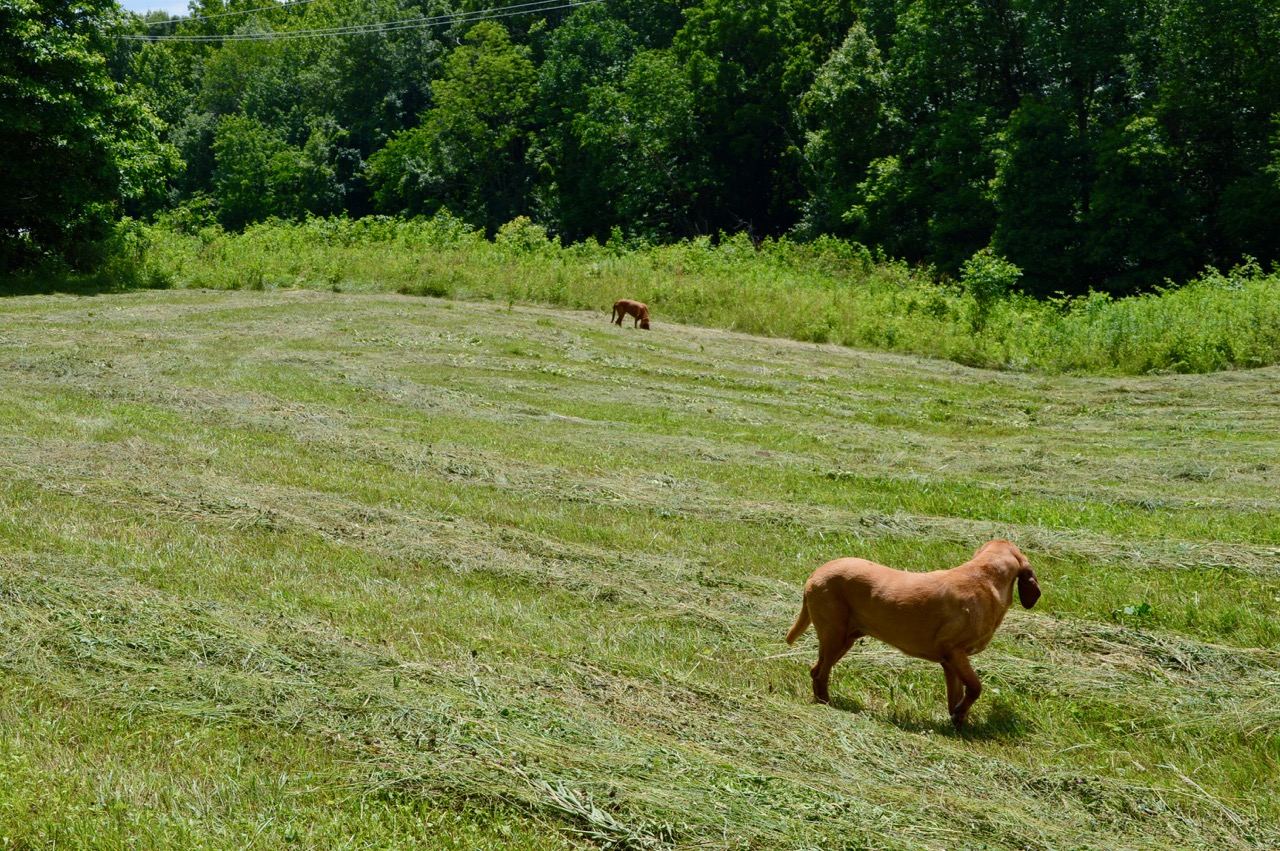 It looks a lot different once the field is cut ... much more enjoyable doing the hound walks. Once everything is raked and baled, the path we walk every day will show up in dark green from the grass that has been mashed down as I walk. 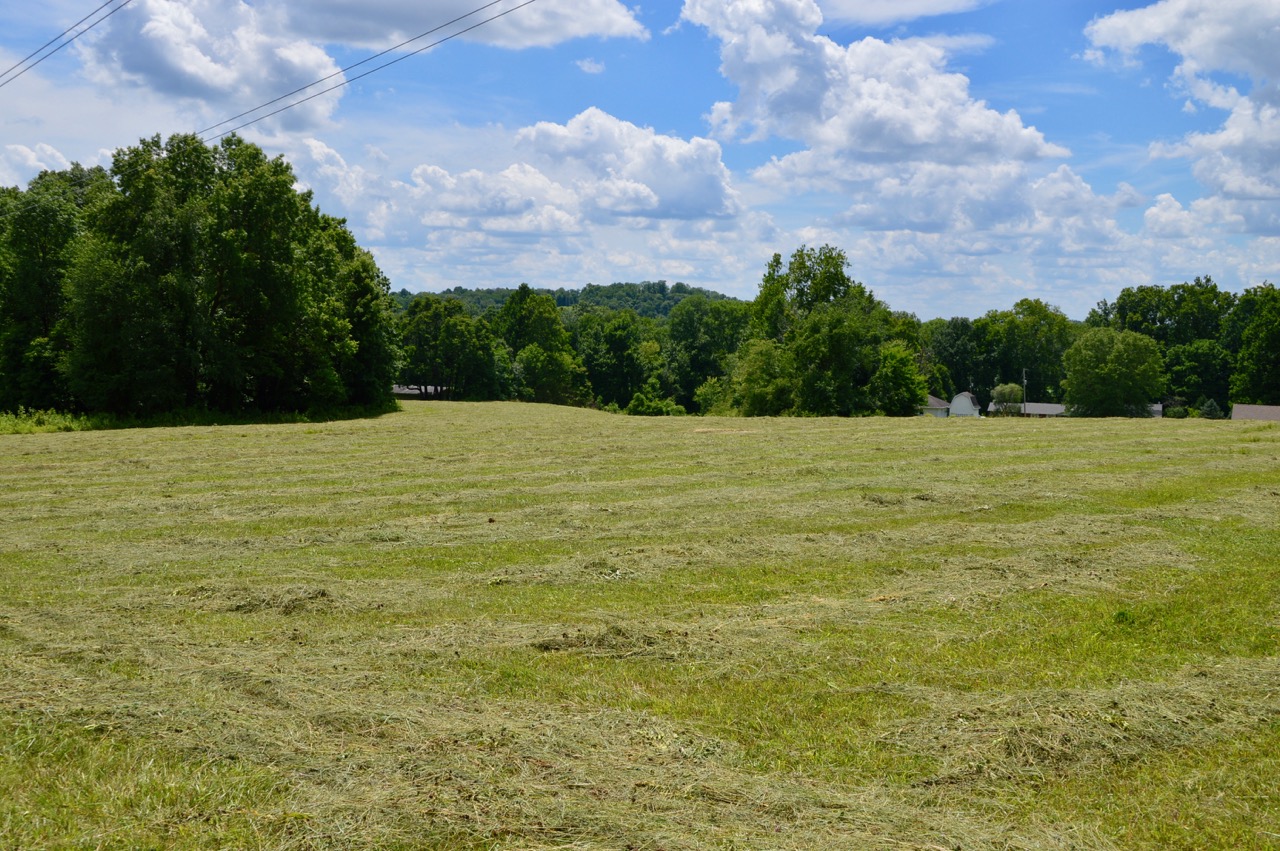 We picked Stella up on the way back. 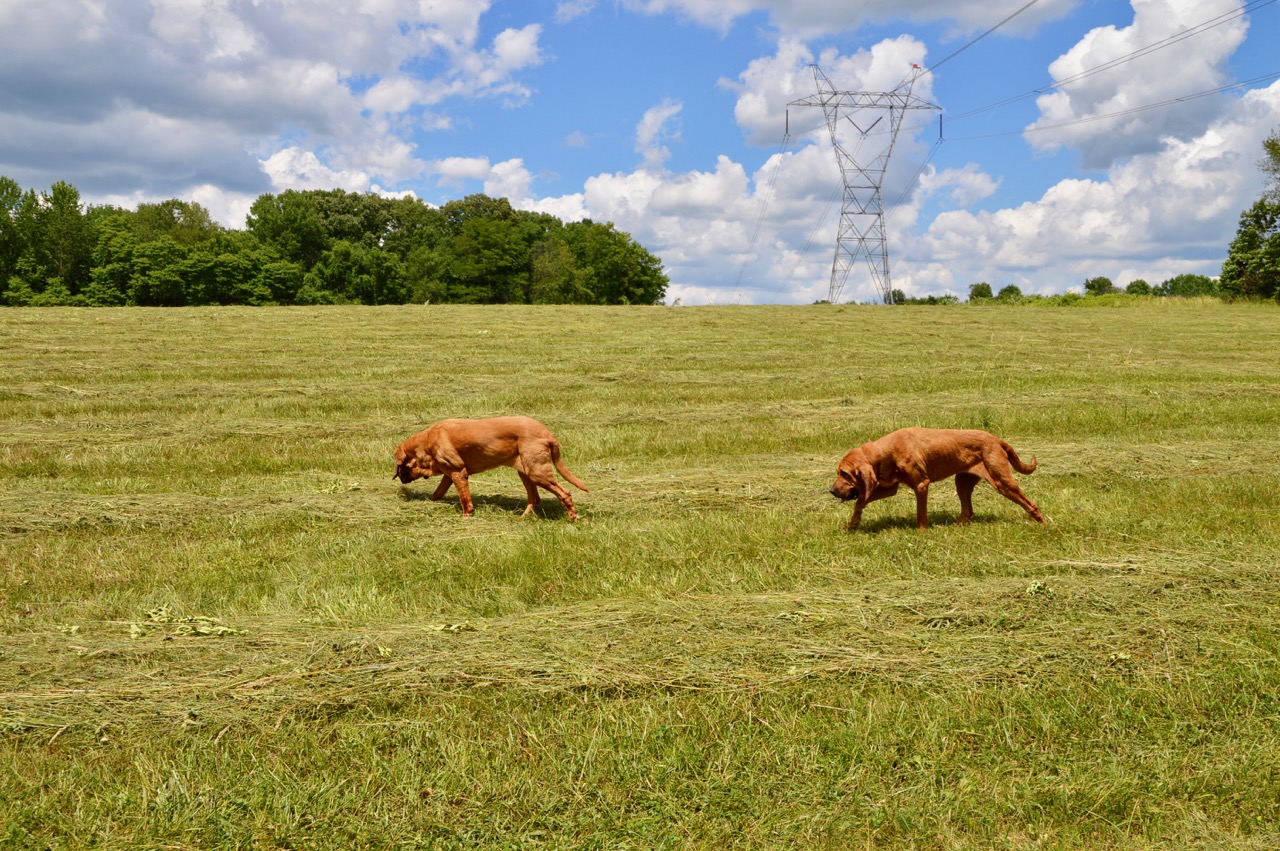 The last of the yellow flowers until next year. 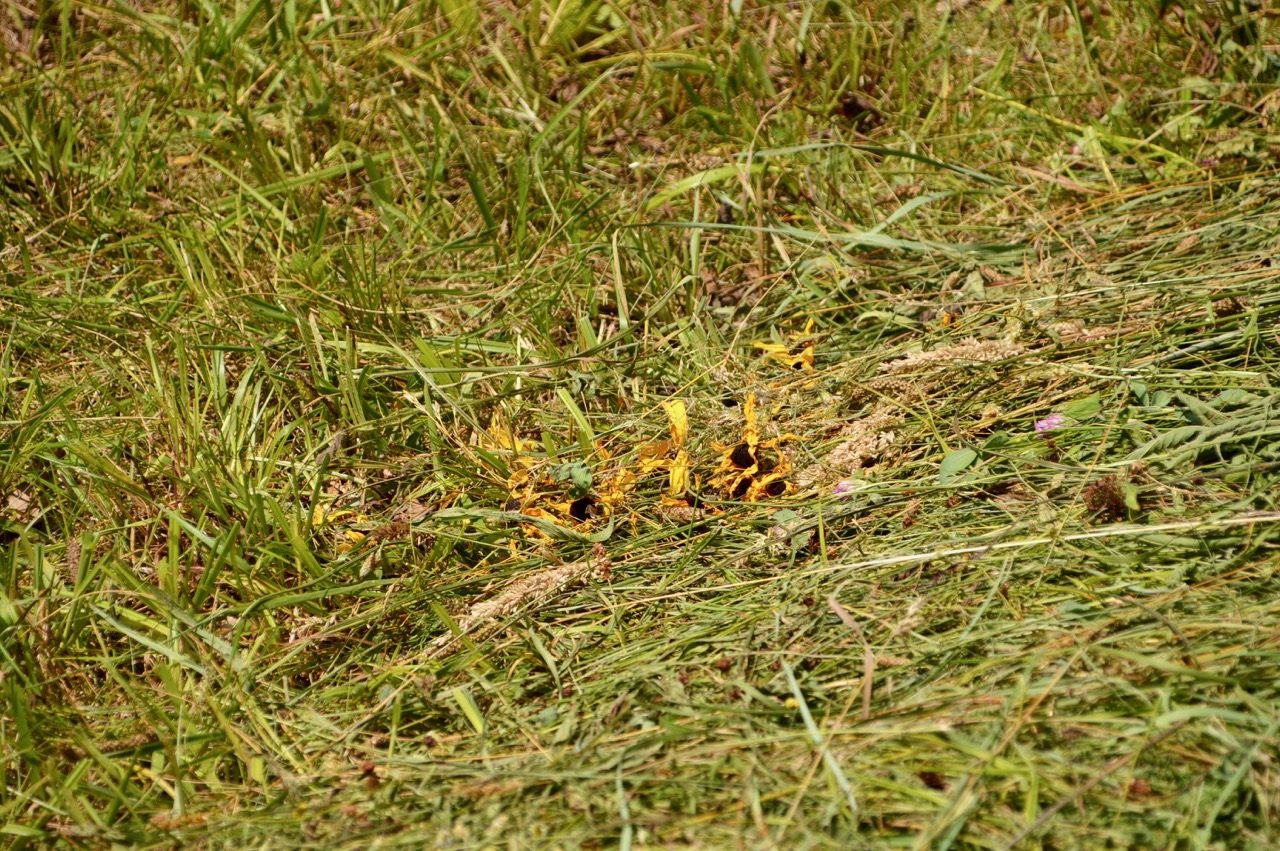 Although the high temperature was only low 70's today, Sadie had enough exercise exploring the field plus a lot of running full steam trying to catch sparrows while I was cutting weeds. I was on the north side of the yard at the time with the weed eater and did not have the camera to show how far she was running to get them. She had never ran further or faster chasing sparrows until today. 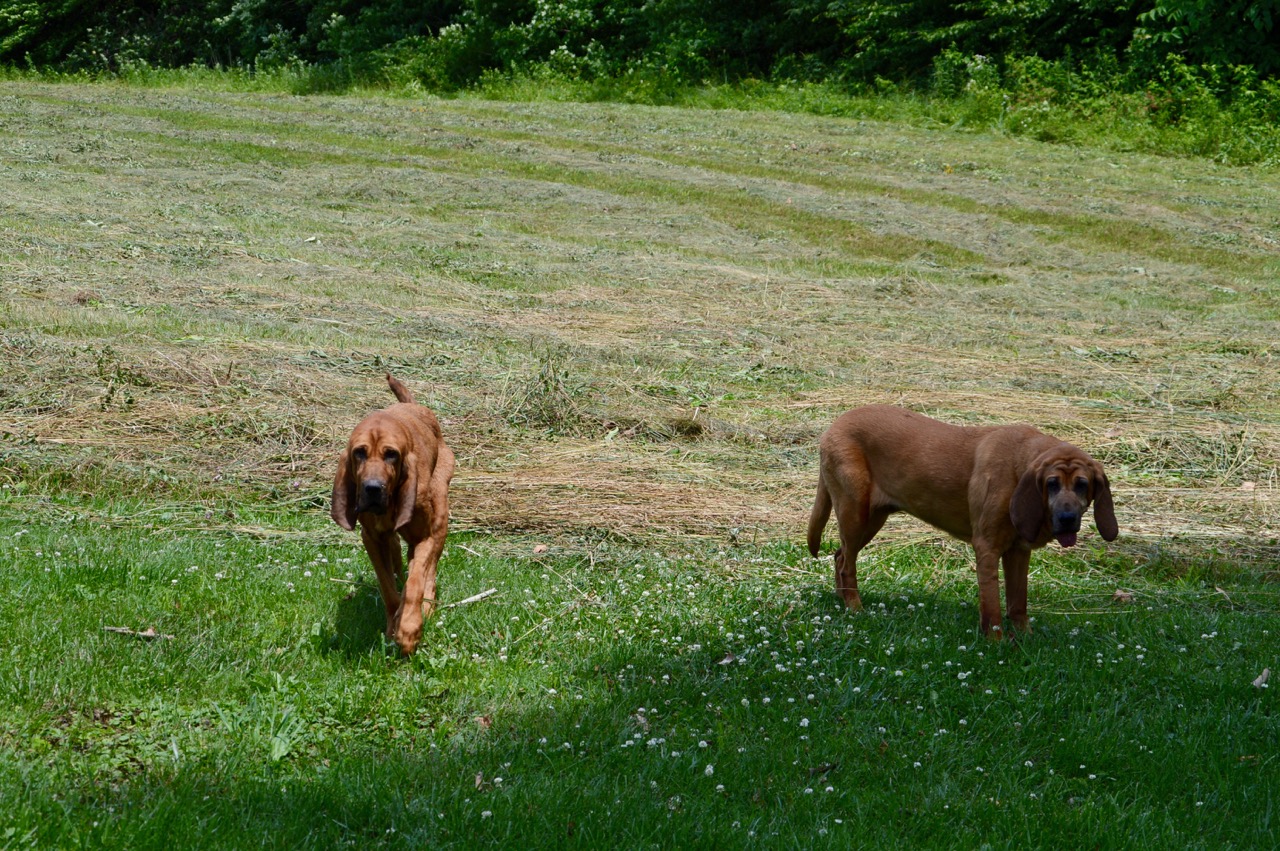 It started last night when I tried to reply on a couple of recent blog comments. Blogger would not load my box to reply in, then did not recognize my user name. After a few attempts I decided I'd try to clear out 'cookies' and erase all the built up data. I hate doing that because that means I have to re-sign into all the websites I use that require a user name and password.

After doing that, I was able to reply to the comments and thought clearing out the cookies of the browser Google Chrome fixed the problem. This morning while starting this post it was even more messed up. It was trying to load all of my photos in their original size instead of the smaller version like the settings I have. So I rebooted my computer thinking I might have a network problem with just Blogger.

Not only did that not work but when I clicked the link to edit the post I had started, my Activity Monitor graph I have open on my other monitor, started to max out and I was going through data like water while the page was hung up trying to load. I shut Google Chrome down and tried using Safari.

My blog loaded fast the morning photos loading without any problems, almost instantly while using only 5Mb of data. I have been using Google Chrome the past few weeks for their Data Saver app that seems to work based on the decreased amount of data I am using in a 24 hour period.

The major plan for today was cutting weeds on the driveway until the battery died. I'll probably wait until tomorrow to mow the yard making sure the sun bakes out all of the wetness from two days of rain.

Since he turned around soon after passing the house I had the feeling he may have been doing a test drive before buying the old tractor. I didn't know of any tractor shows going on locally but I think I remember seeing this tractor for sale a few days ago when I drove to town. 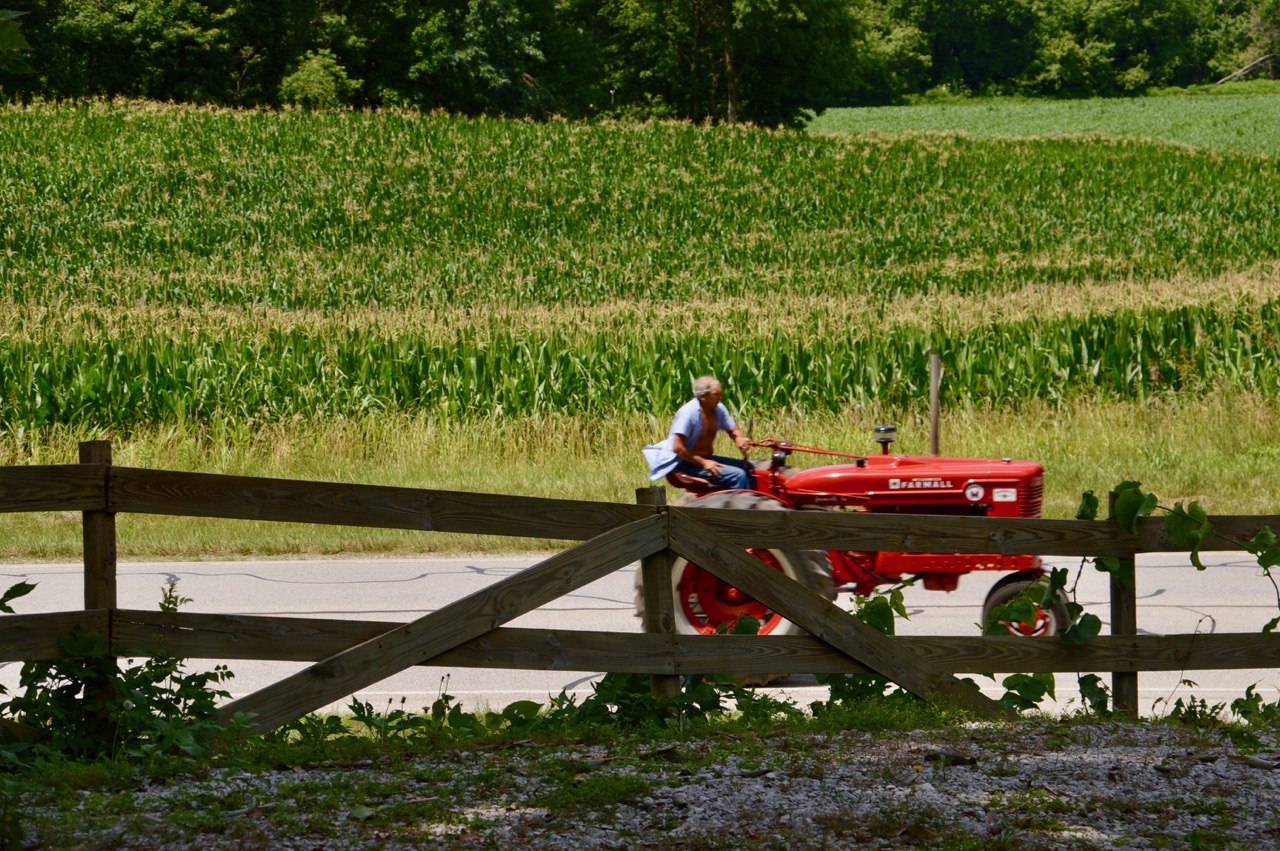