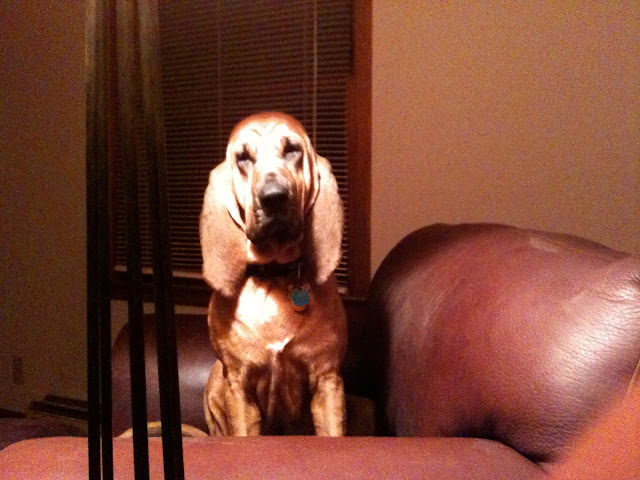 Sadie is 9 years old today. Considering she came from a 'backyard breeder' from the local area that isn't bad. She has never been sick but has made a couple of vet trips to get stitches when her nose had led her to some kind of injury. To celebrate she will get a 3rd walk with just her and I. No cake but will get some extra treats and additional scoop of kibble for each meal. 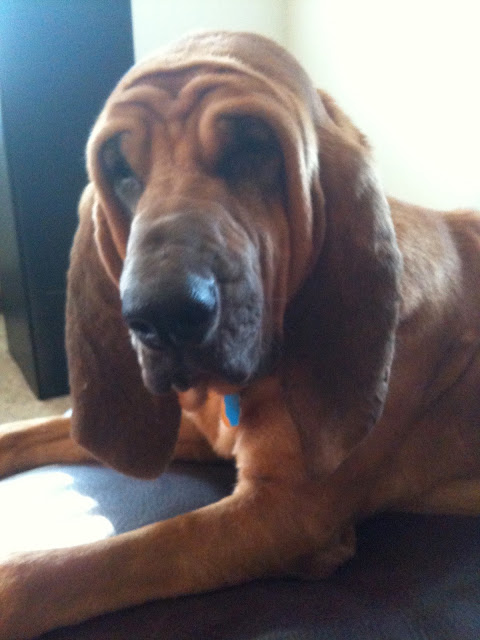 Her puppy photos were destroyed by "user error" in 2008. I was having malware problems with my Windows PC and reformatted my hard drive thinking I had captured all of the hound photos during my backups the week before. They were gone ... so what you see in these first three photos are all I have of her. Based on the two rabies tags on her collar I can only assume she was two years old in these first three photos. 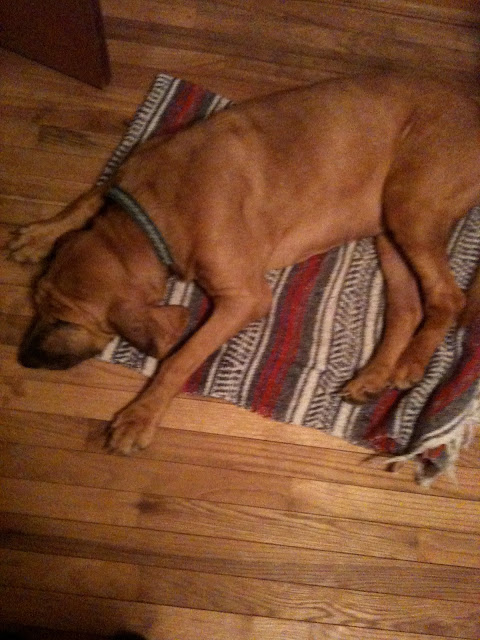 She was never one that liked sleeping on blankets or dog beds when she was a pup. By the time I got home from work she had scooted all of the blankets inside her large kennel to the corner and was sleeping on the bare black plastic kennel floor. At night she only liked this small Mexican blanket to sleep on. 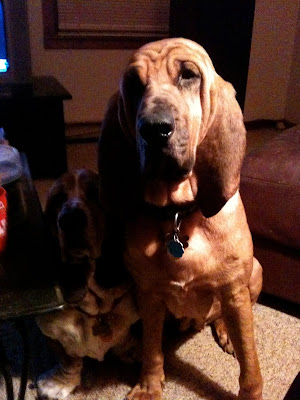 As a puppy she was the most obnoxious and destructive puppy I had ever owned. I found out later her strong natural instincts to track scent led her to boredom quickly ... then she'd find anything to keep her busy. Even trying to chew her way out of a strong wired indoor kennel. Those large black ones you see in the pet stores could barely keep her in control while I was gone all day.

Winston did his best to train her to be a good house dog but it took almost 5-6 years before I could stop "puppy proofing" the house when she was around the house. Even if I was sitting at my desk, she would sneak off and find things to get into. 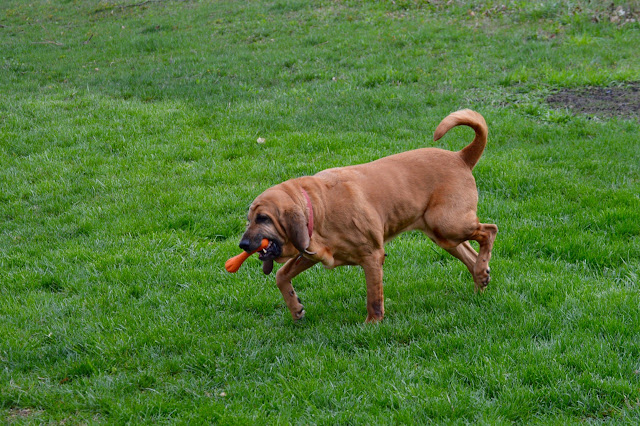 To this day she loves playing fetch. When cabin fever hits her during the winter months or rainy days, she will toss me a bone or a ball wherever I am sitting so she can fetch inside the house. 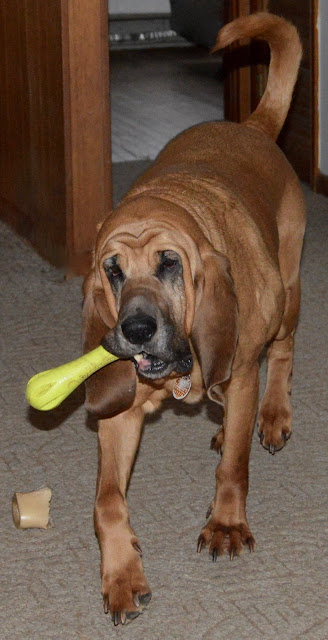 I also did not let her walk the field off leash until she was almost 7 years old. I had tried when she was younger but one snowy December day she took off after deer, flying as fast as she could into the large field behind the one we walk every day. I couldn't find her and it wasn't until 5-6 hours later that she showed up at the door wanting back inside. After that she was back on the leash for daily walks and the tether when roaming in the field on her own. 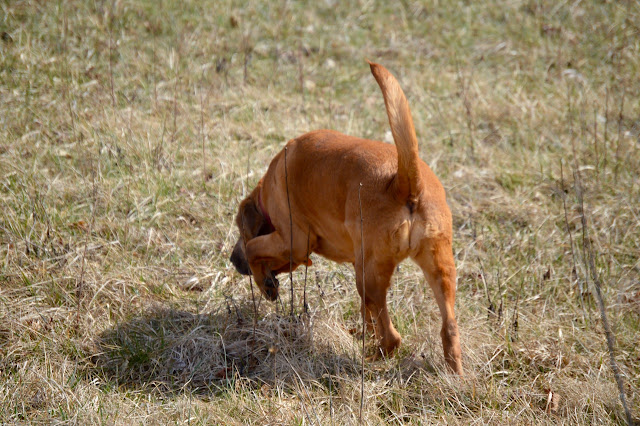 Once she is in this pose, she is unconscious of what is going on around her or what is being said. She is has only one thing on her mind and that is tracking. 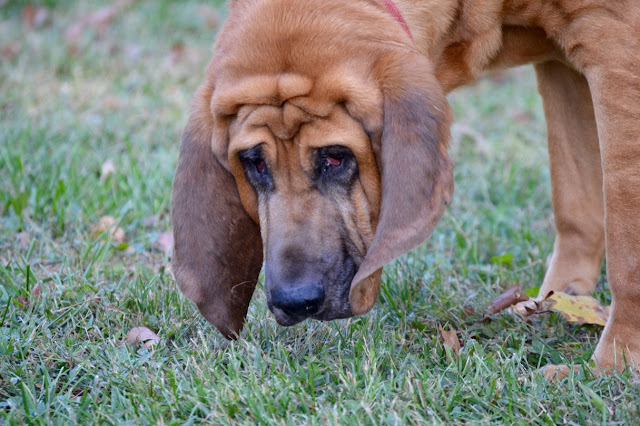 Before buying the 25' retractable leash, I use to walk her on a 40' lead through the field while Winston and later Heidi walked leash free. 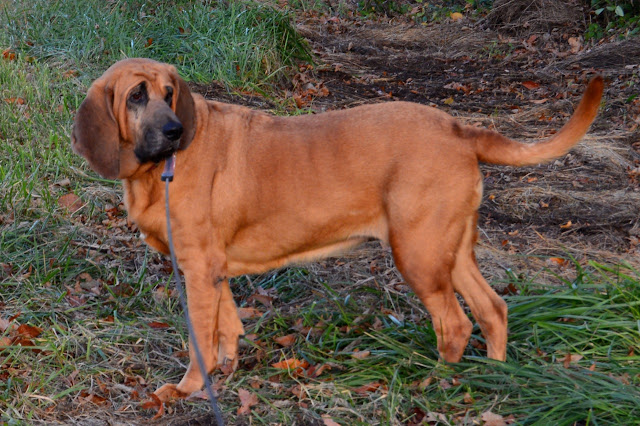 She was around 7 years old in this picture. Her gray hair on her muzzle is not quite showing up yet ... nor had Stella arrived. He best friend at that time was Winston. 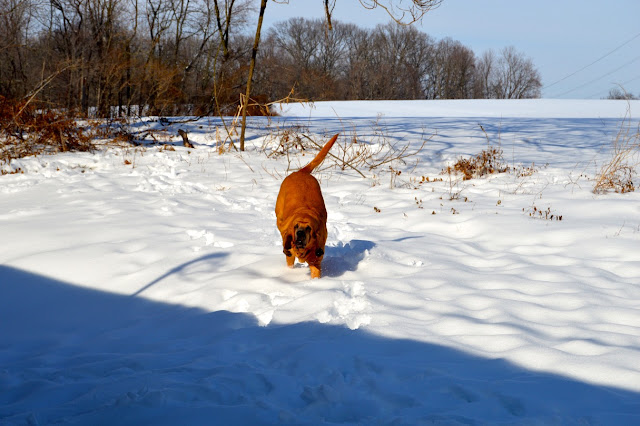 It doesn't matter if it's 95° and humid or 7° and freezing, she always likes spending time outside. 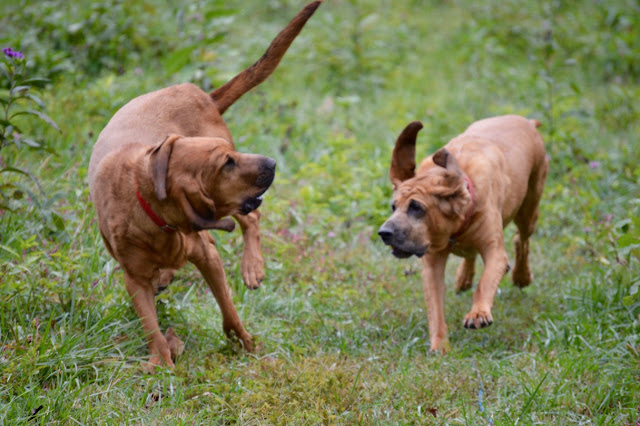 In August 2015 at the age of 7 Stella arrived on the scene and for the first time Sadie had someone just as big, just as strong and maybe a little faster than her. She had not had this much energy since she was a puppy. Winston and Heidi were not only much smaller but also older and past the age of any kind of playing or running with Sadie.

Not only did Stella get Sadie running and playing again like a puppy but taught her that it was okay to kickback and enjoy the outdoors without tracking scent 24/7 whenever she was outside. Sadie had a new friend that I have no doubts added years to her life. 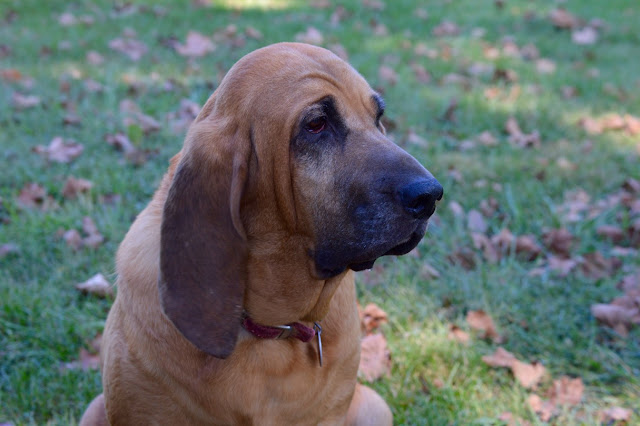 At 8 years old the gray hair started showing up more under her eyes and around her black nose. That did not decrease the amount of food she wanted nor the number of walks she likes every day. After she had outgrown the last hole on her collar she went collarless, except for her annual trip to the vet of her checkup. 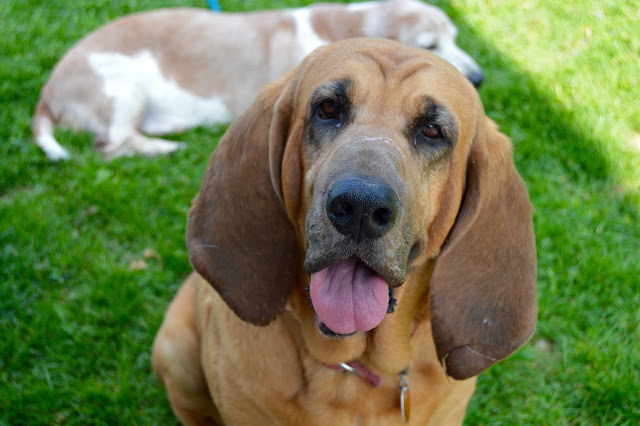 Anytime she is outside she always has to be doing something ... this is her 'stare' to tell me she would like to go on a walk. That stare happens more times during the day, than we take walks. If we do 3 walks in a day that is just shy of 1.5 miles. 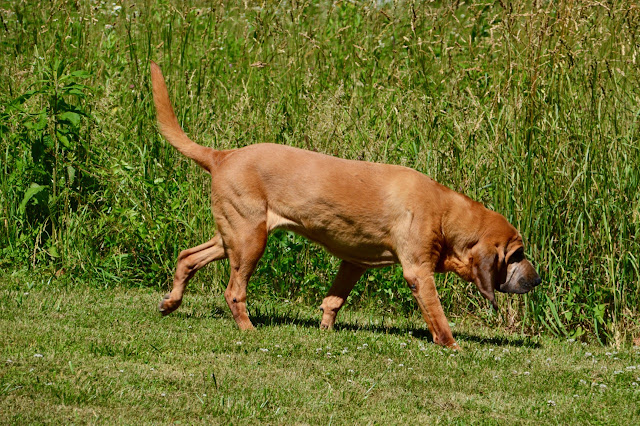 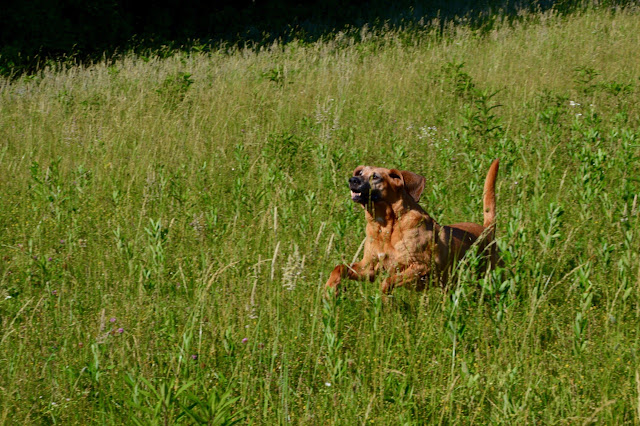 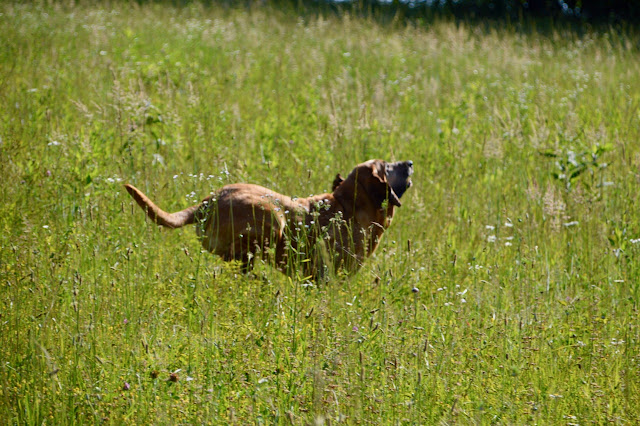 Just a few days before her 9th birthday she is still tracking scent in the yard or field. Her newest hobby of 2017 is chasing swallows out in the field. They fly just low enough over the top of her that she thinks she can catch them. 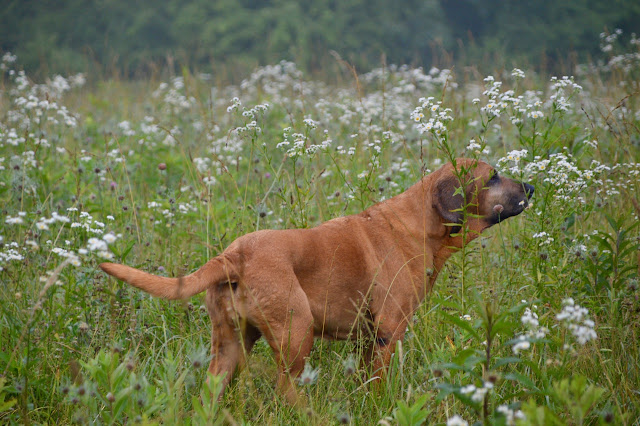 She has turned into a great house hound. She no longer destroys my shoes, paperwork, books or cell phones. Her favorite hobby as a puppy was chewing off the plastic tip on shoestrings and only the tip ... and only one per shoe. Luckily she grew out of that.

She is already telling me it's time to eat lunch ... so I have to go.
at June 19, 2017
Email ThisBlogThis!Share to TwitterShare to FacebookShare to Pinterest
Labels: Sadie's Birthday