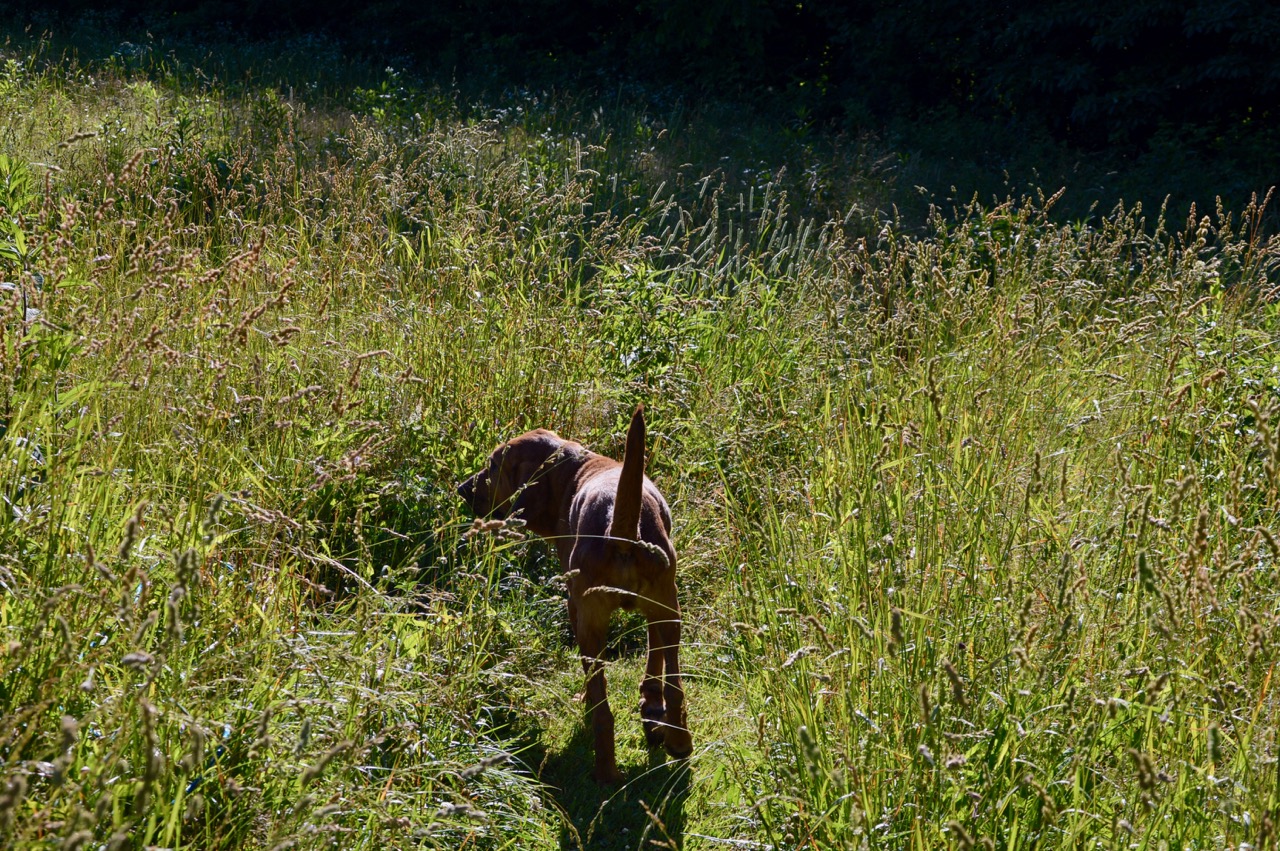 After a full night of great sleep, the hounds and I started this morning's walk a little later than we did in recent days but not by much. With the temperature at 60° when we started I knew the field was going to be very wet in the shaded area. I was going to let Stella do whatever she wanted and go at her pace. That proved to be a good test for Sadie later in the walk. 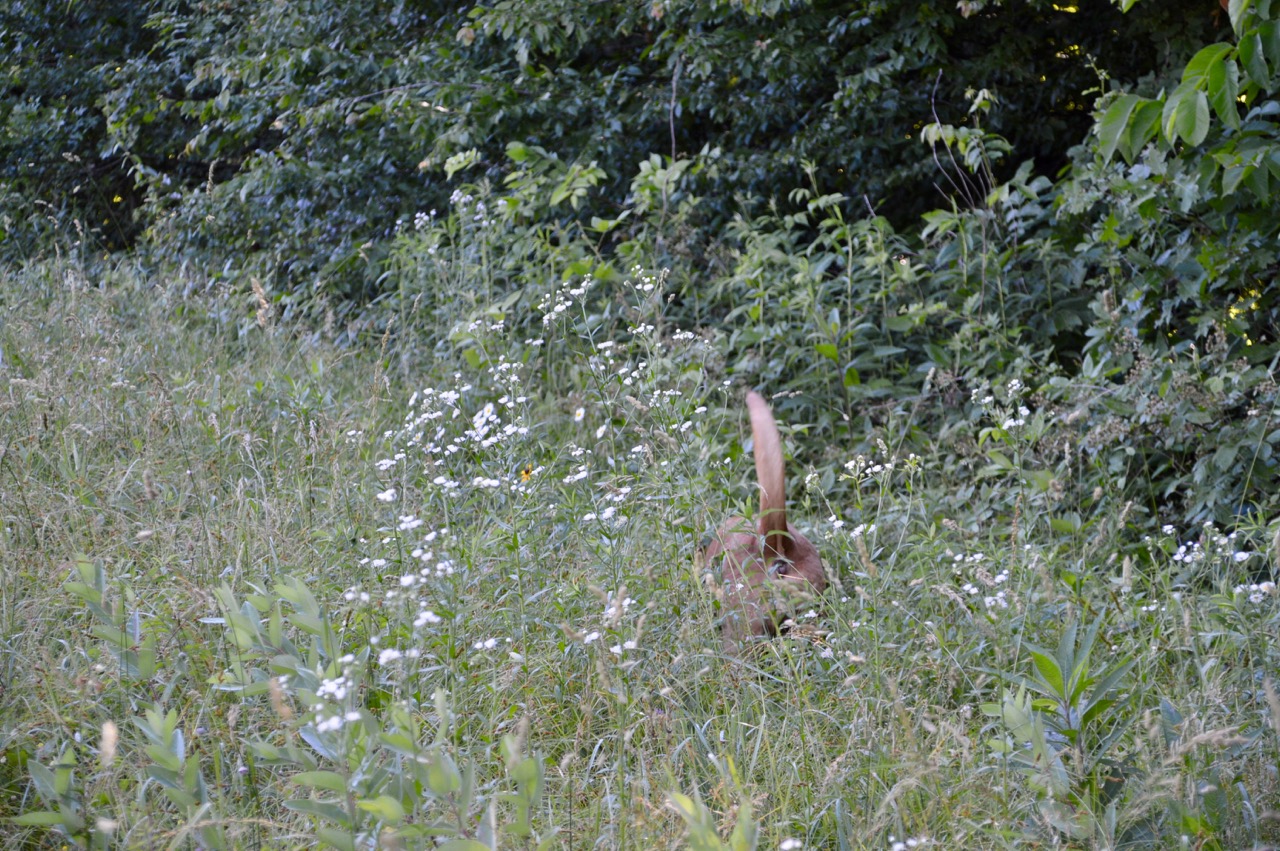 Sadie did not hesitate and was way out in front and never looked back. Stella took her normal path of recent weeks along the return path we take but was also keeping up the pace of my walk, staying ahead of me. 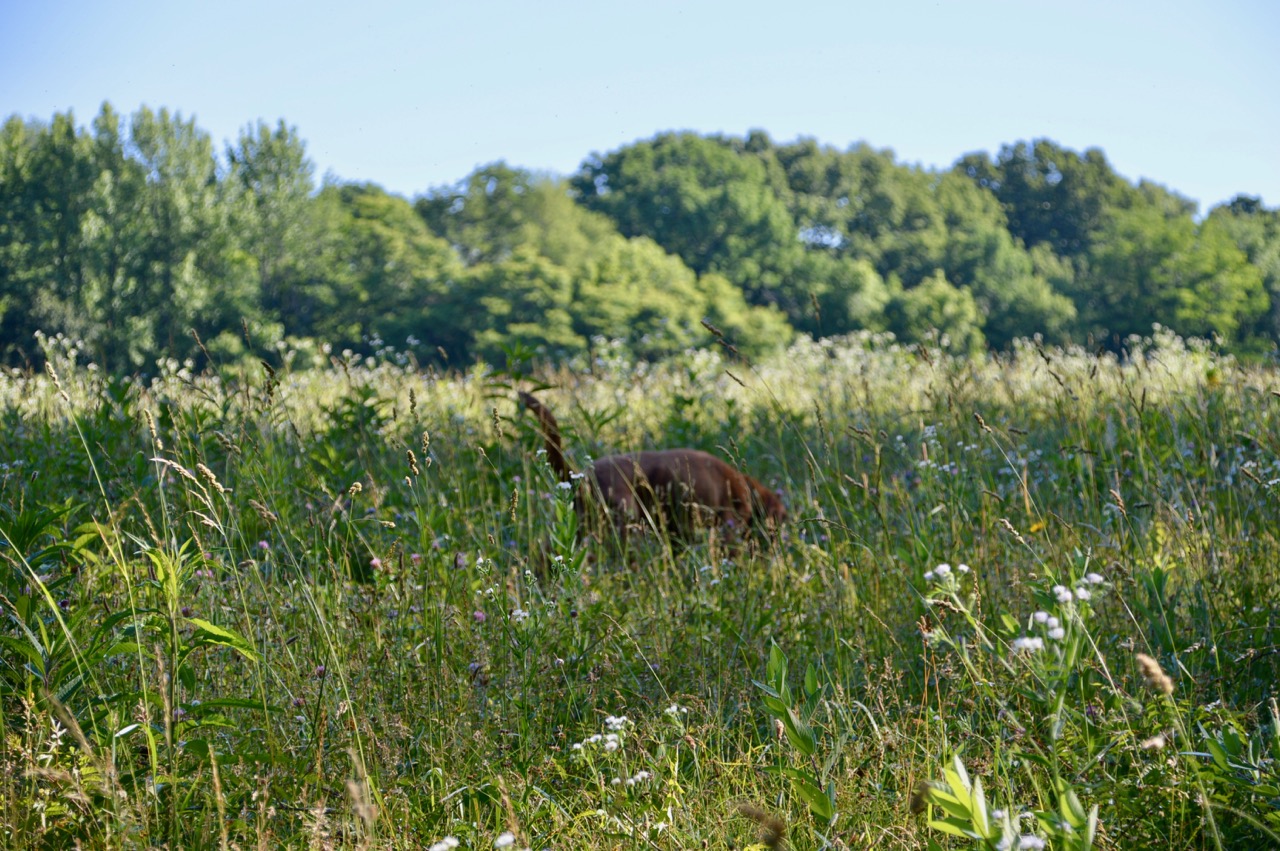 While letting her do whatever she wanted it was a nice surprise that she crossed my path and headed over to the edge of the field to catch up with Sadie. By their activity it was obvious this morning was again providing a lot of new scents. 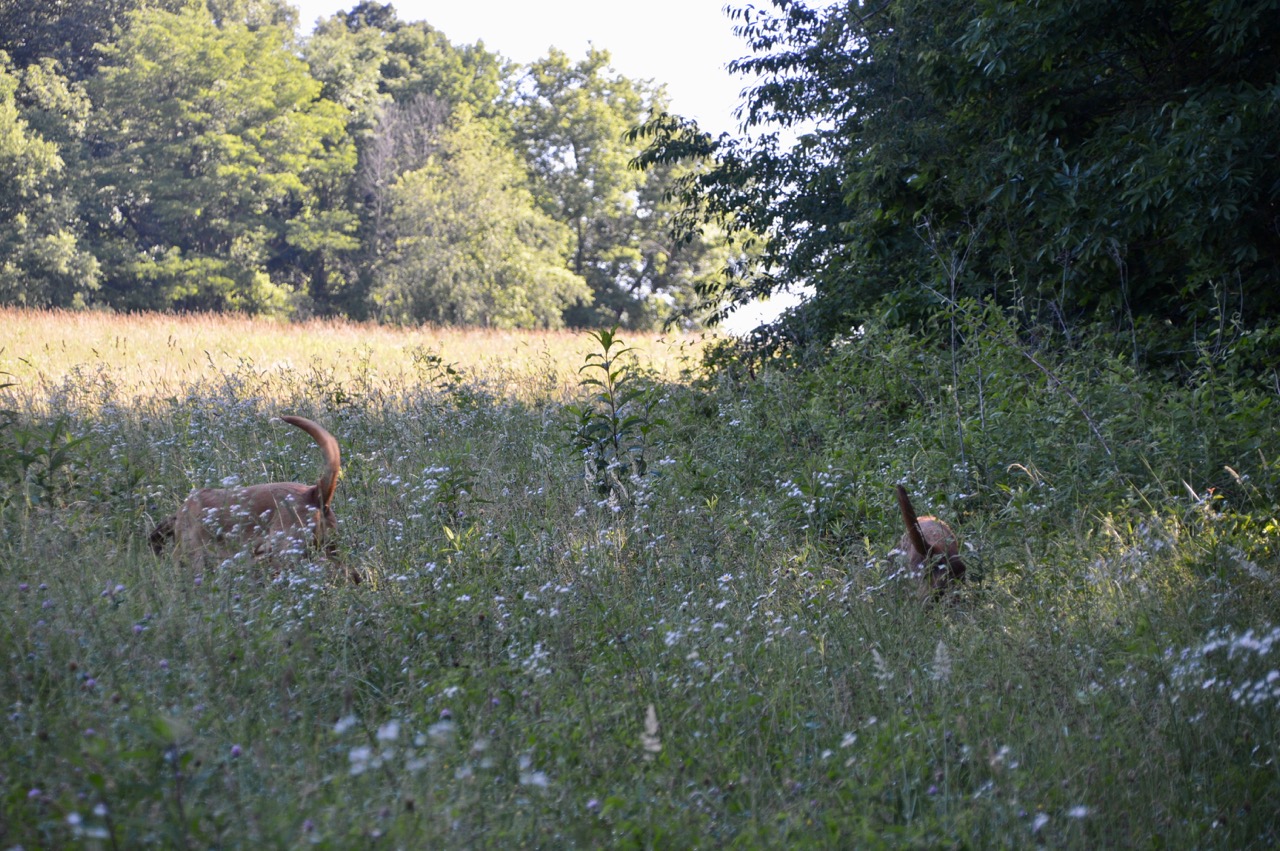 Sadie turned the corner and took off running. I did not see any deer on the horizon, nor did I see any birds like we did last week. She would stop and glance back at me different times to see where Stella and I were. 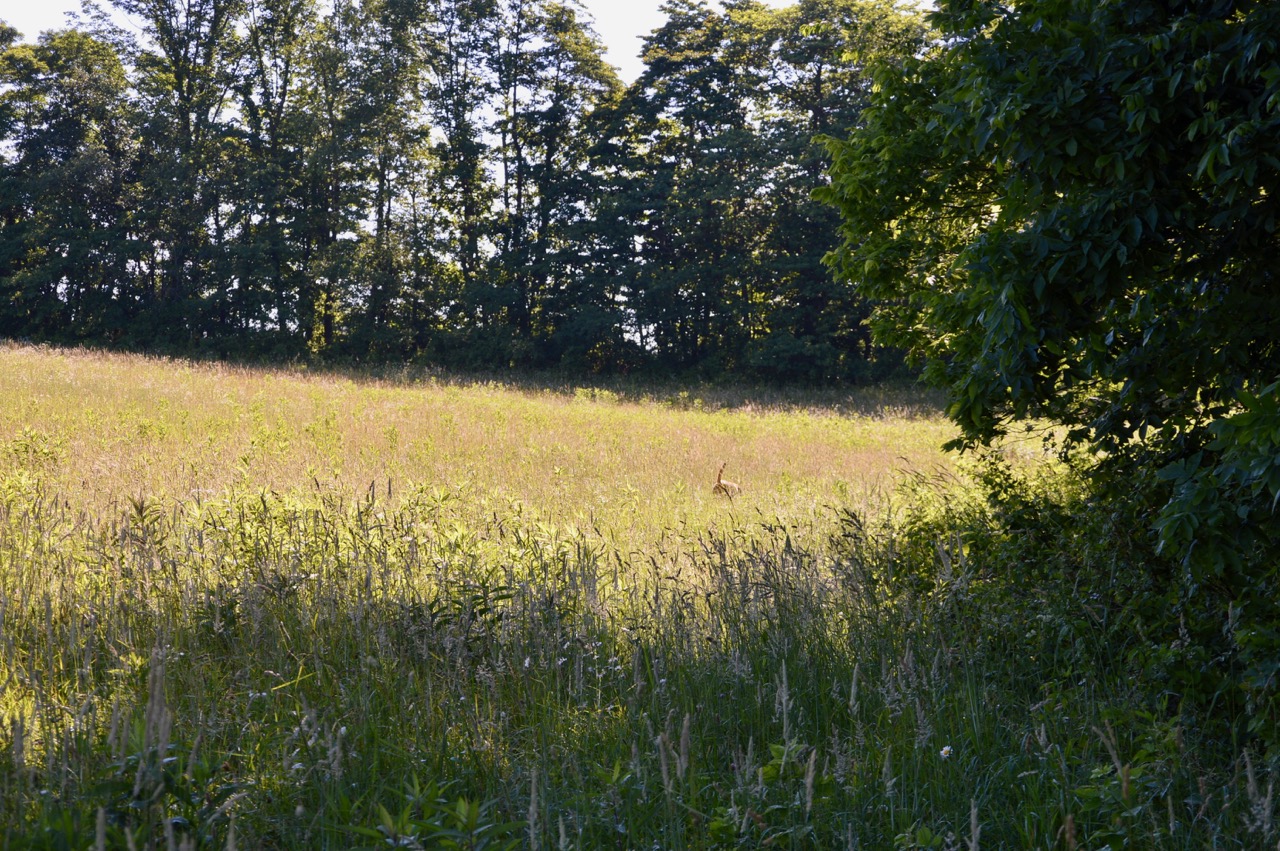 Again today, Stella tried to step into the wooded area but turned around when I said 'no' and she fought through being tangled up in the wild thorny bushes she had stepped into. She is not eating berries but was more interested in something else. 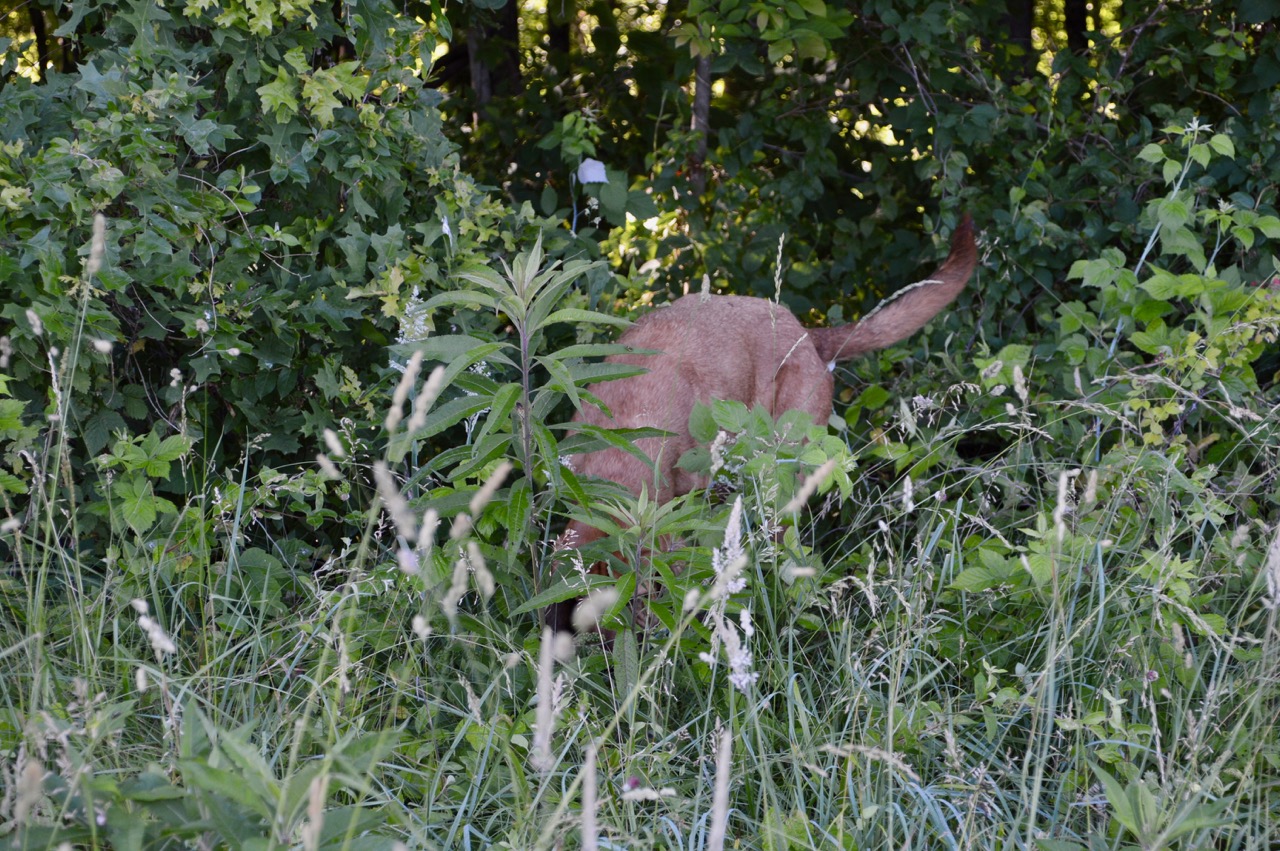 By the time I was almost at the back of the field, Sadie was on her own also. I could tell there had been a lot of deer traffic overnight. 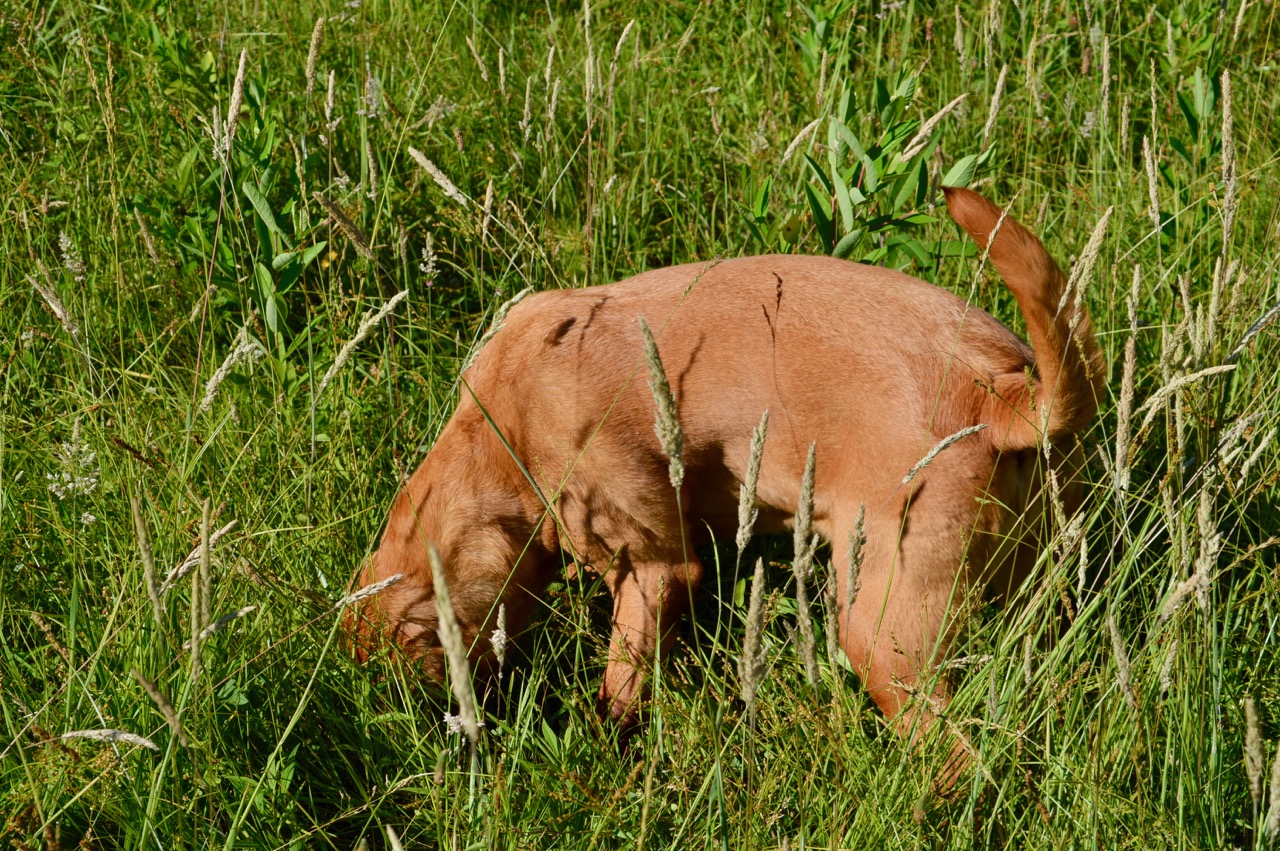 She was also intense in her exploration during the walk. 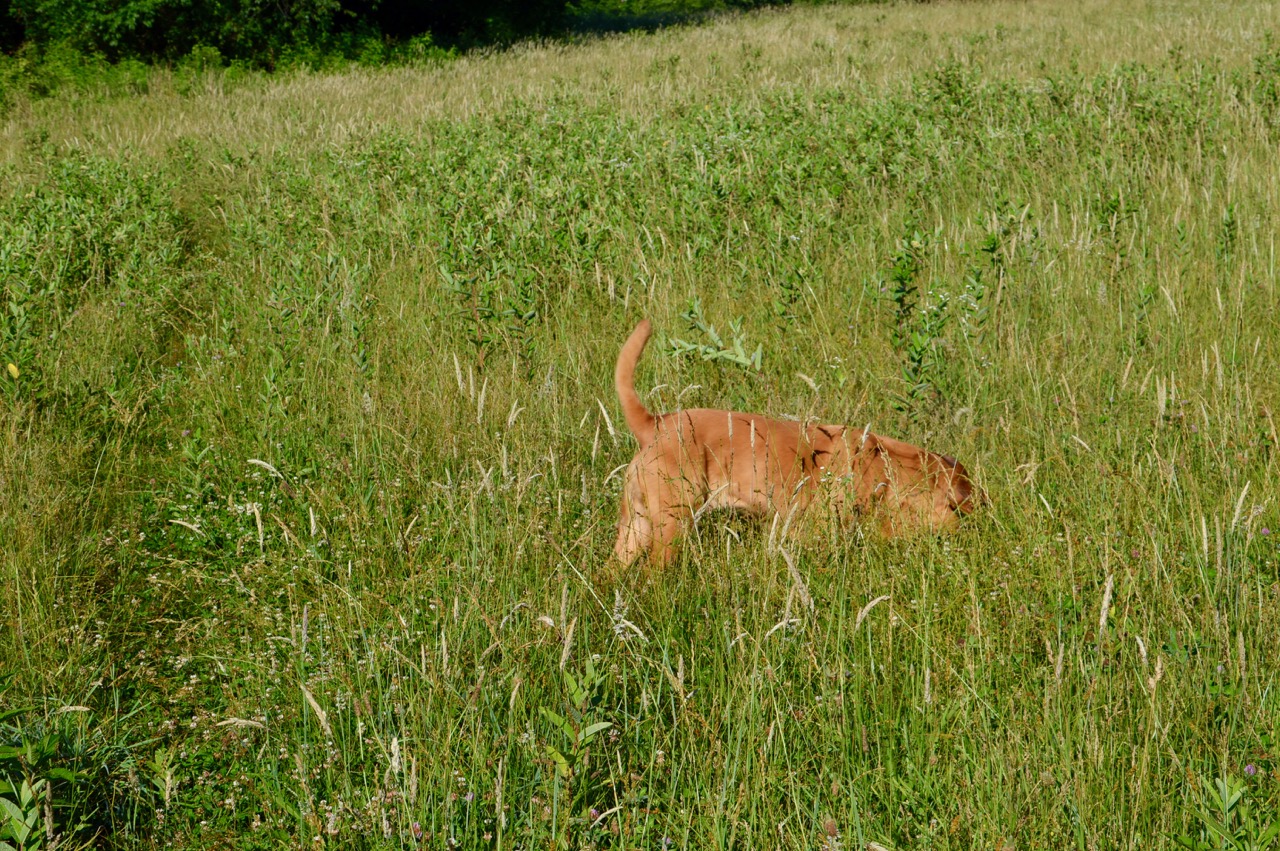 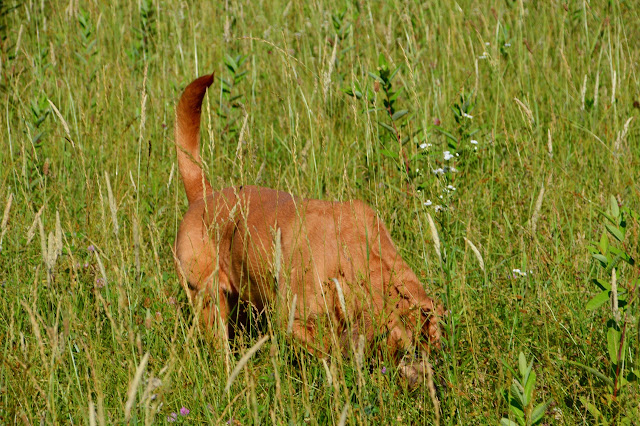 Walking along the back edge of the field I looked through the 200mm zoom lens to see if I could see Stella anywhere on the horizon toward the neighbor's woods ... didn't see her there ... as I scanned to the left along our path we had taken I barely saw some 'red' moving through the tall grass. Once I yelled Stella's name, she stopped and looked in my direction. 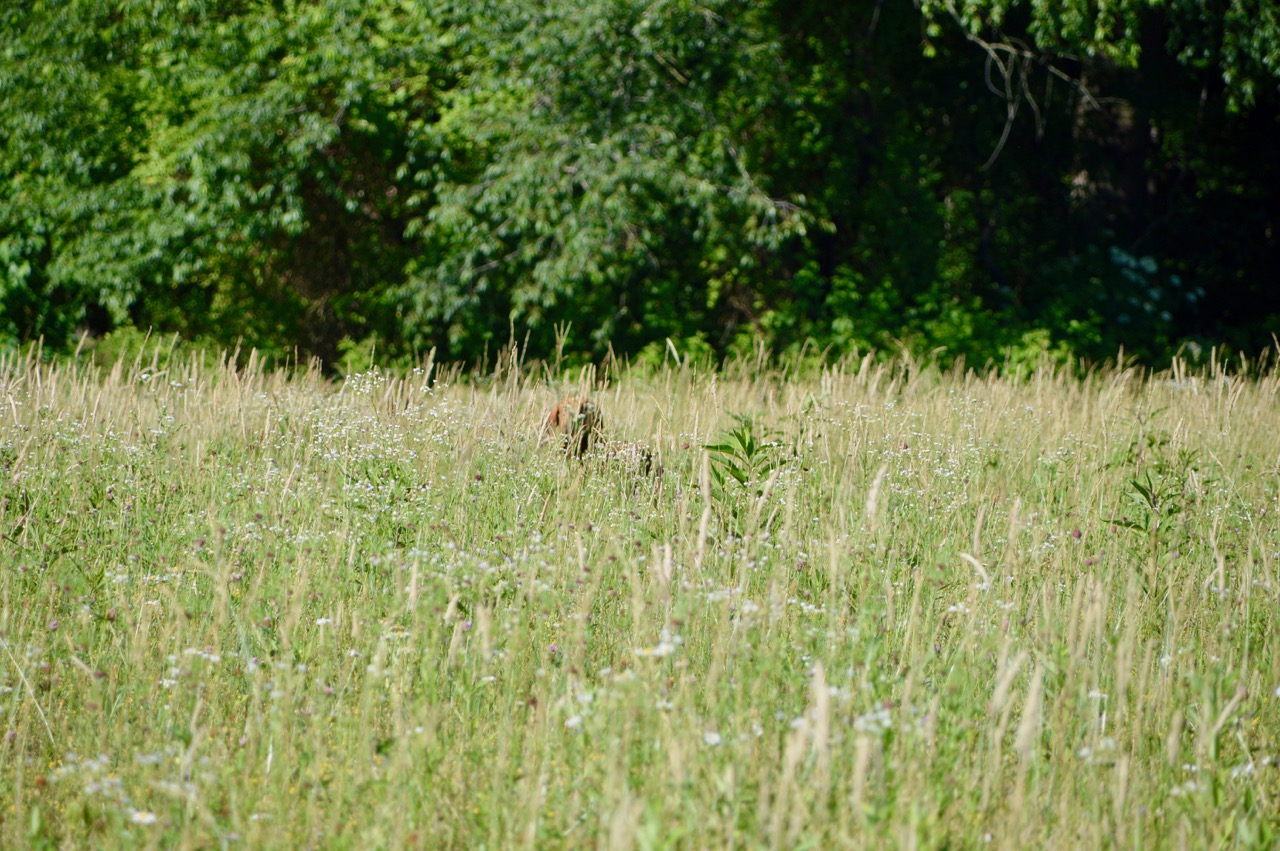 I asked Sadie "where's Stella?" She stopped and looked for Stella in the same direction I had just seen her. 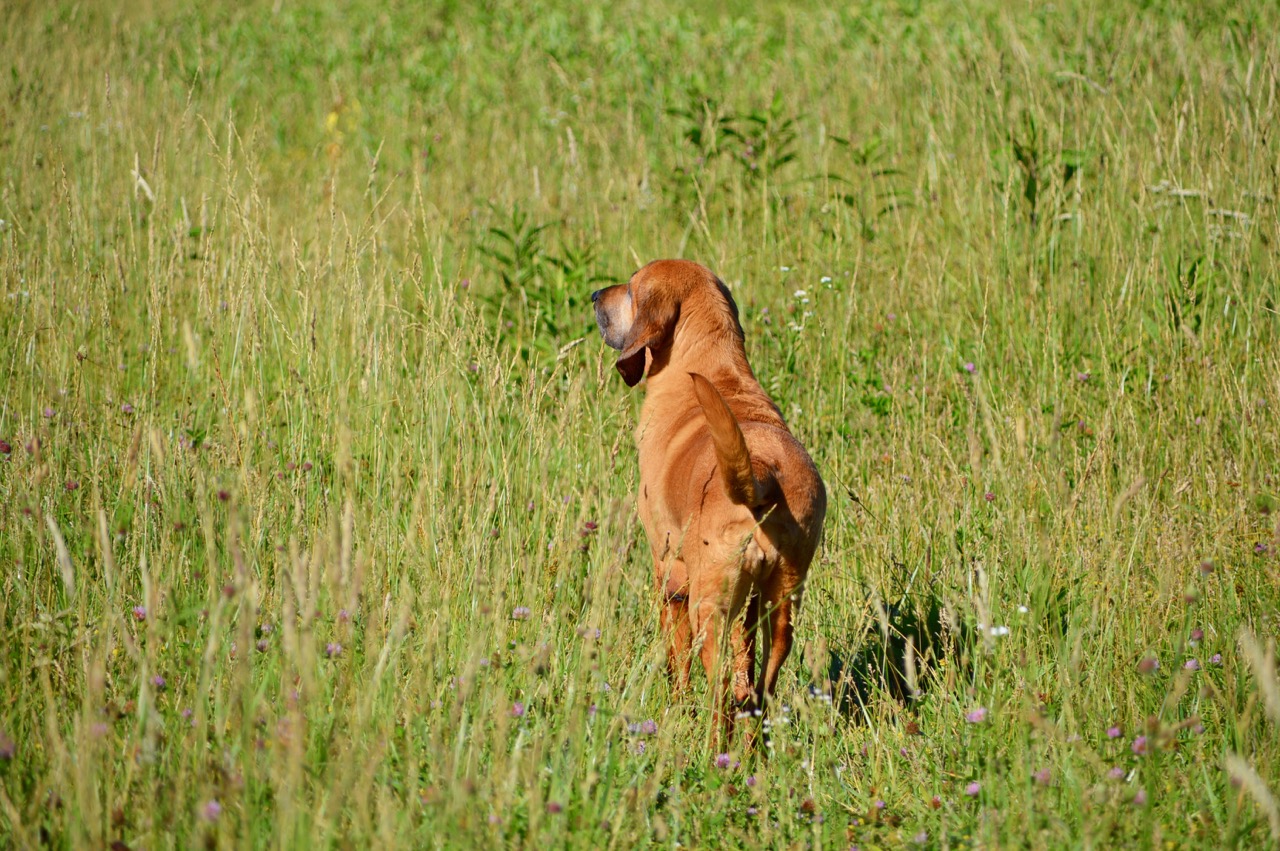 My camera was not able to catch the best shots of Sadie running full speed as she found Stella. Once she picked up Stella's scent she ran at full speed. 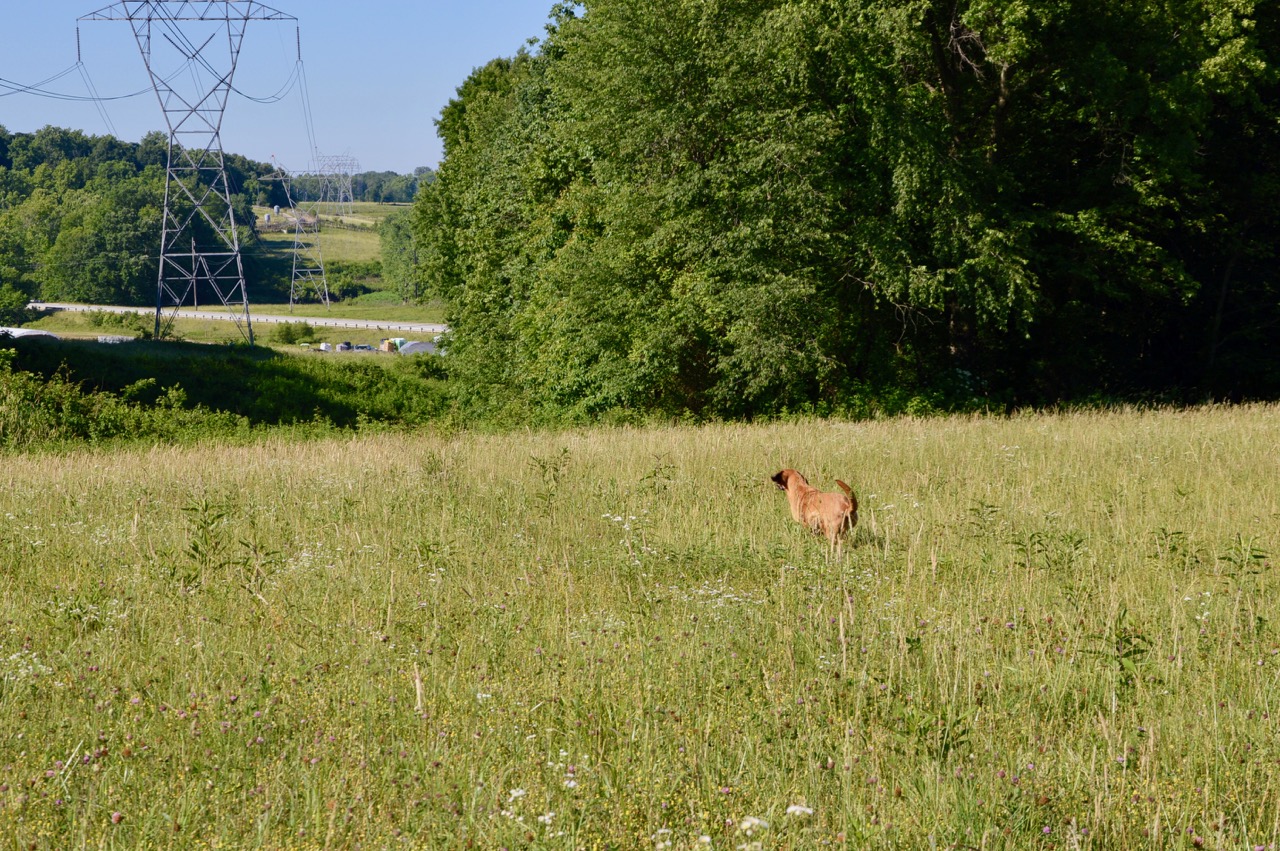 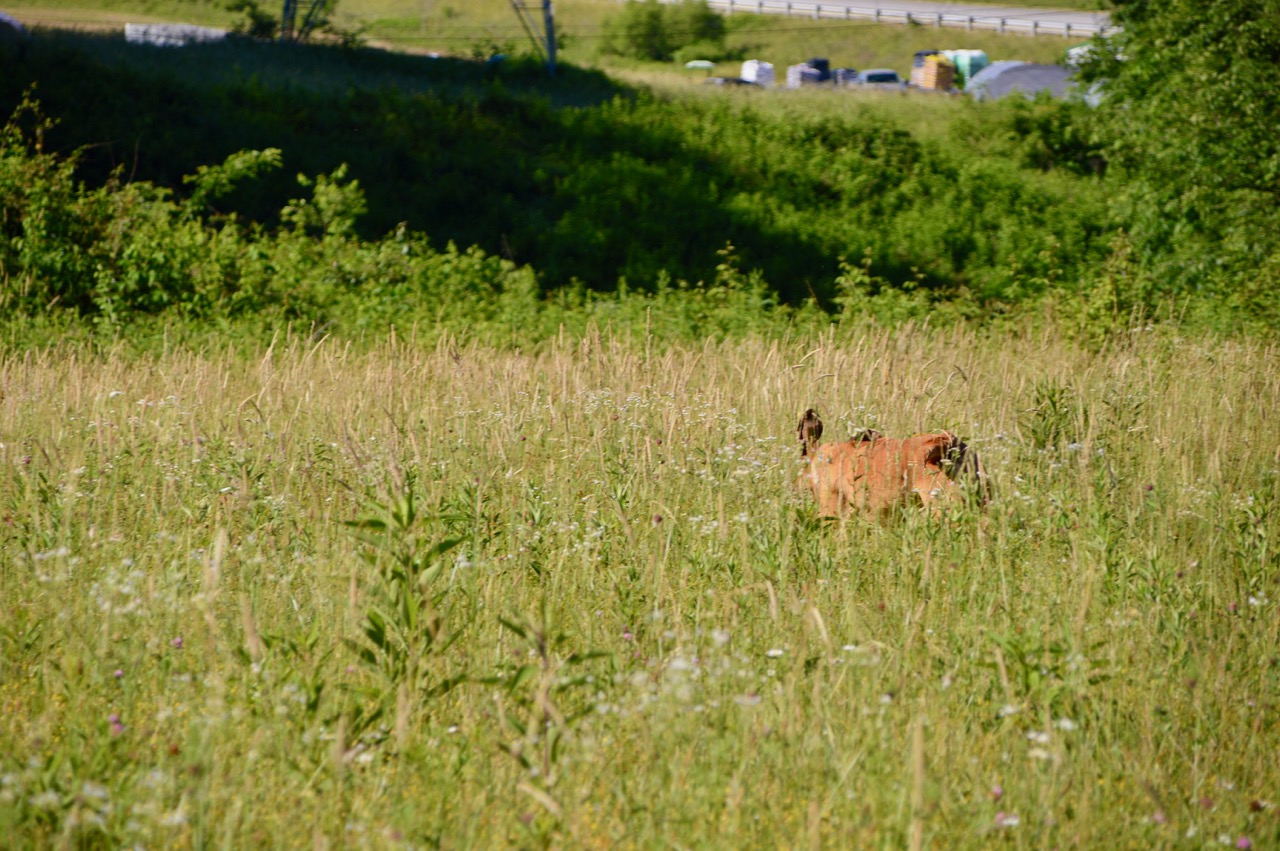 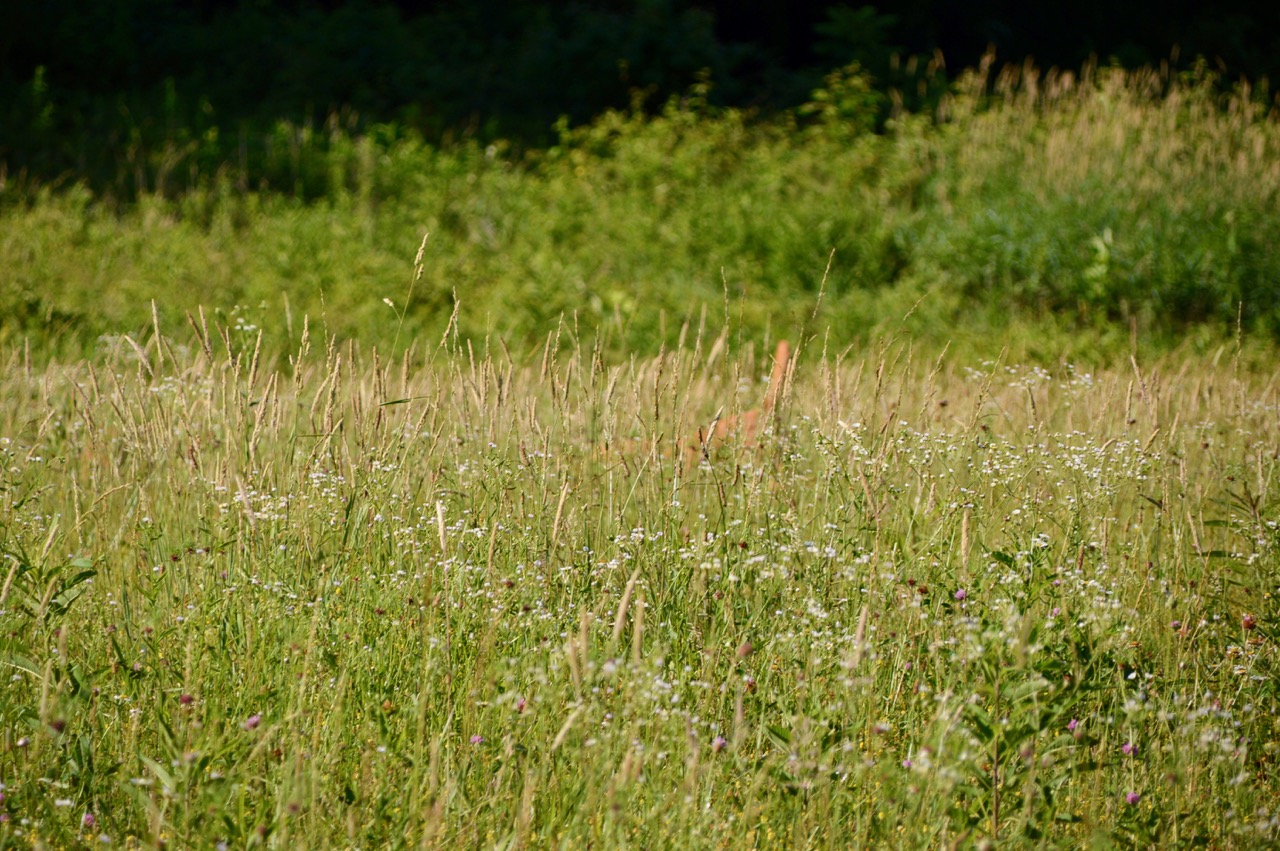 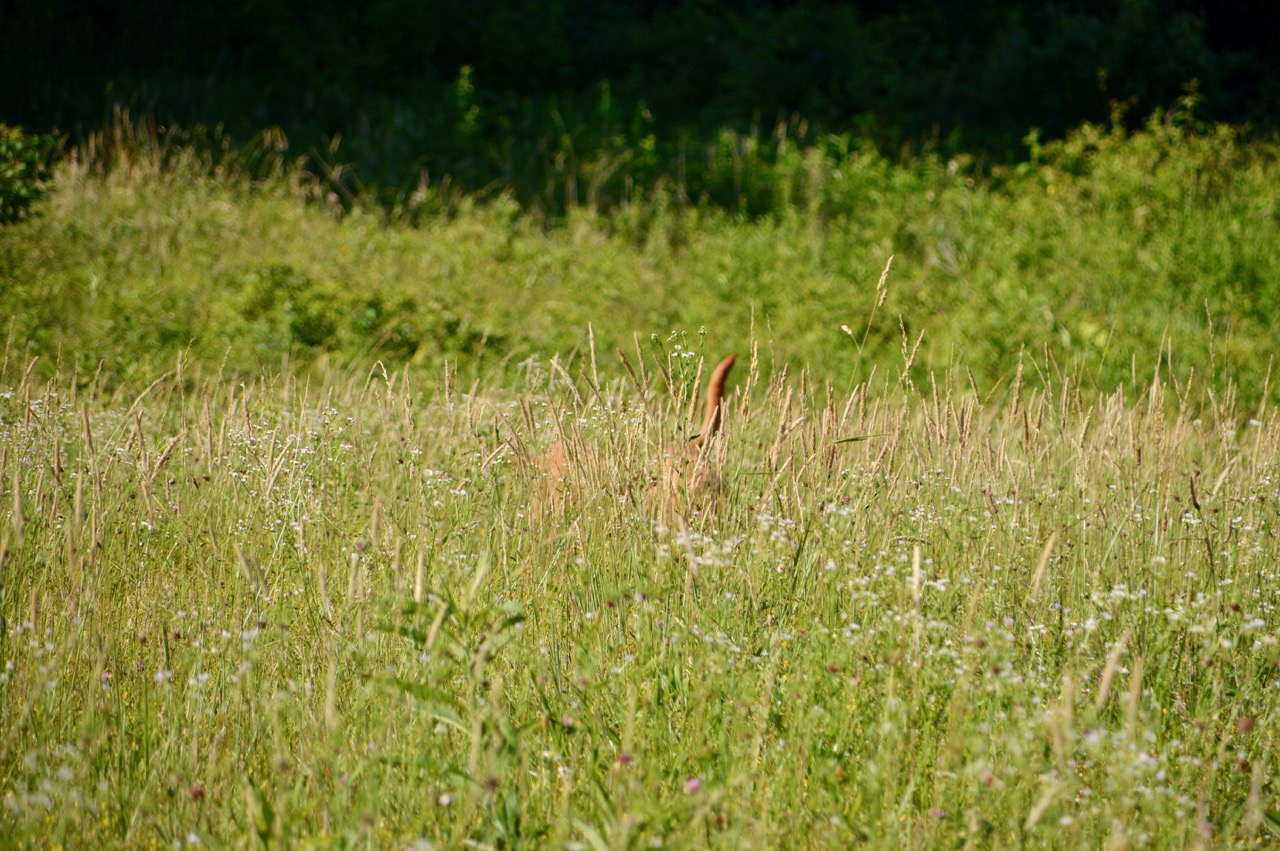 Obviously Stella had found some fresh 'natural protein' and that was even a different spot that Sadie had found and stayed at earlier in the walk. Stella is getting more determined not to move when she on a spot like this, that even a tug on her collar will make her fight against moving. 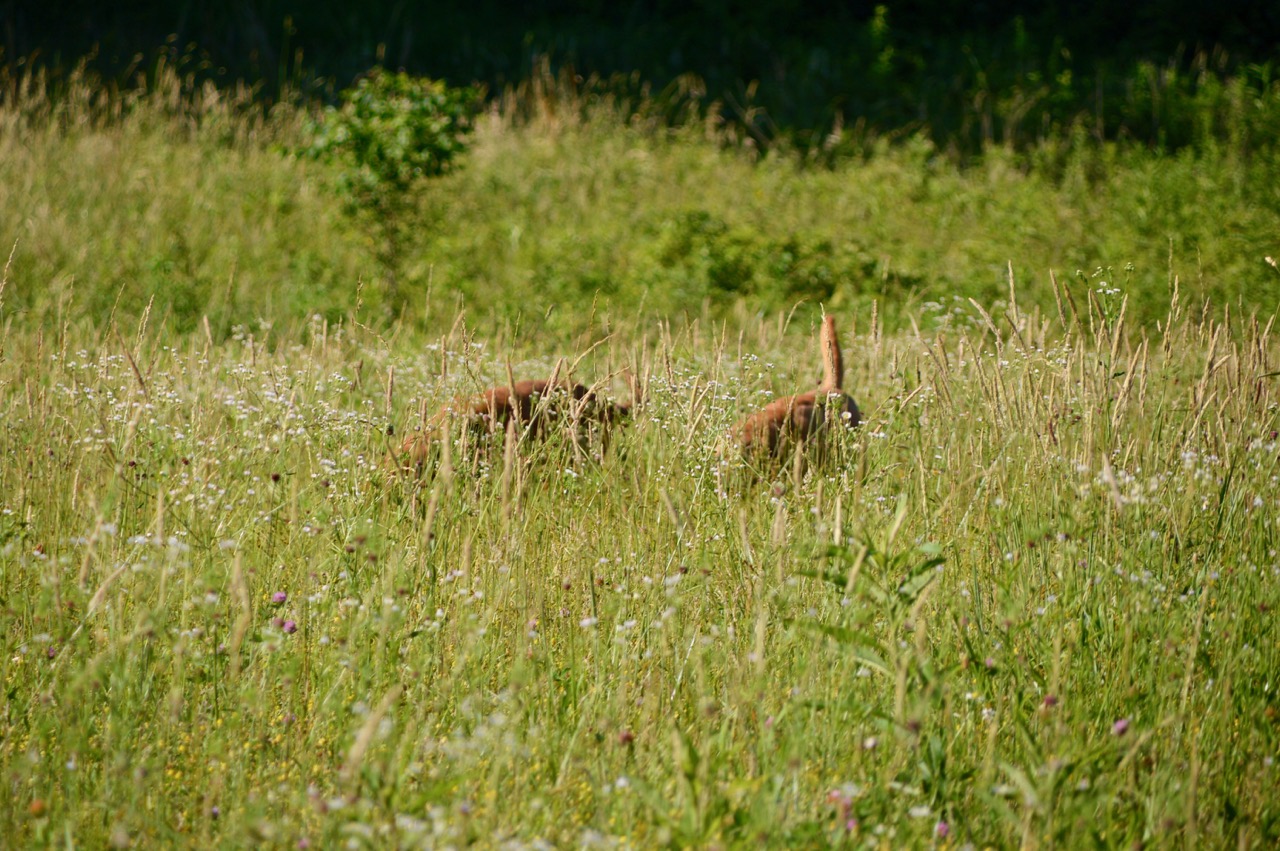 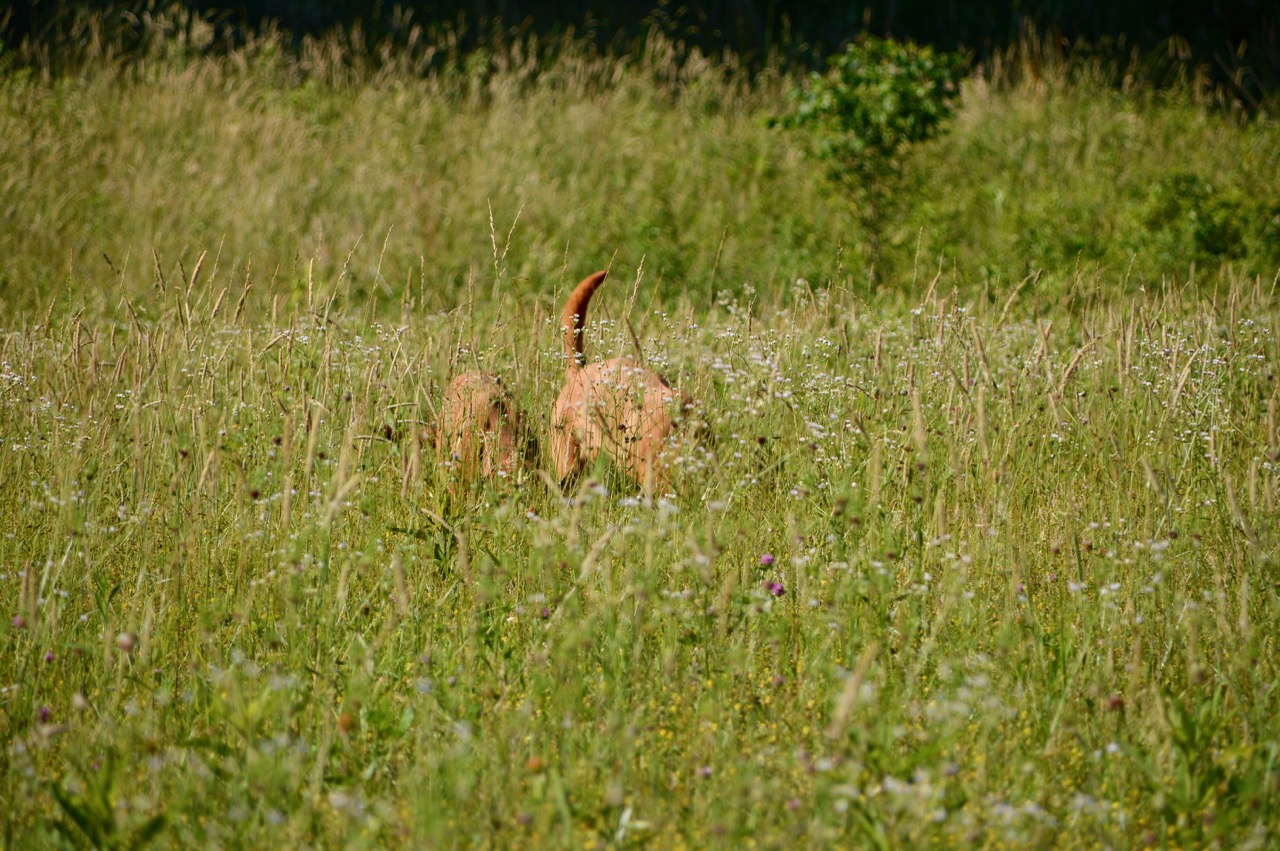 At least the hounds do not fight each other when they share what they have found. 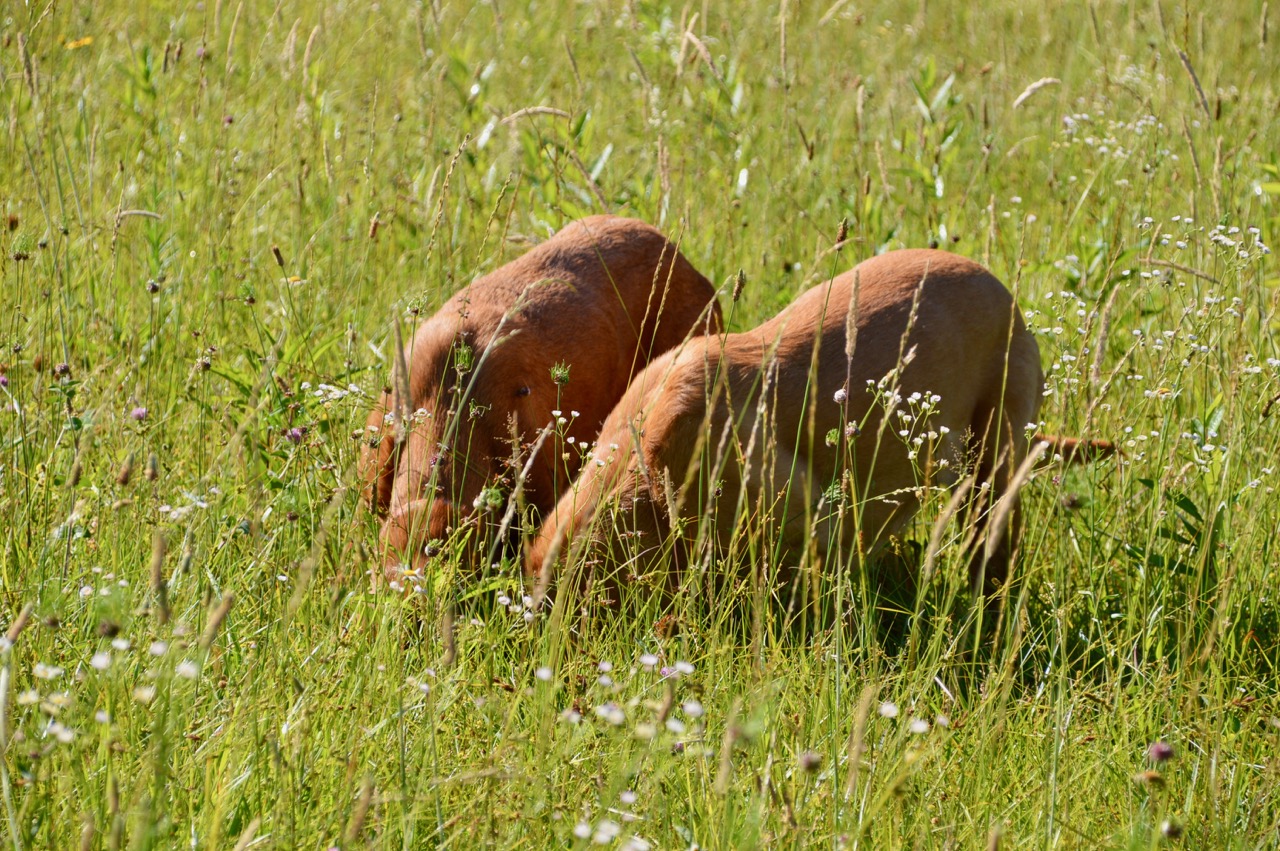 As I walked toward them I noticed a spot a deer had been sleeping recently based on the mashed round grass. 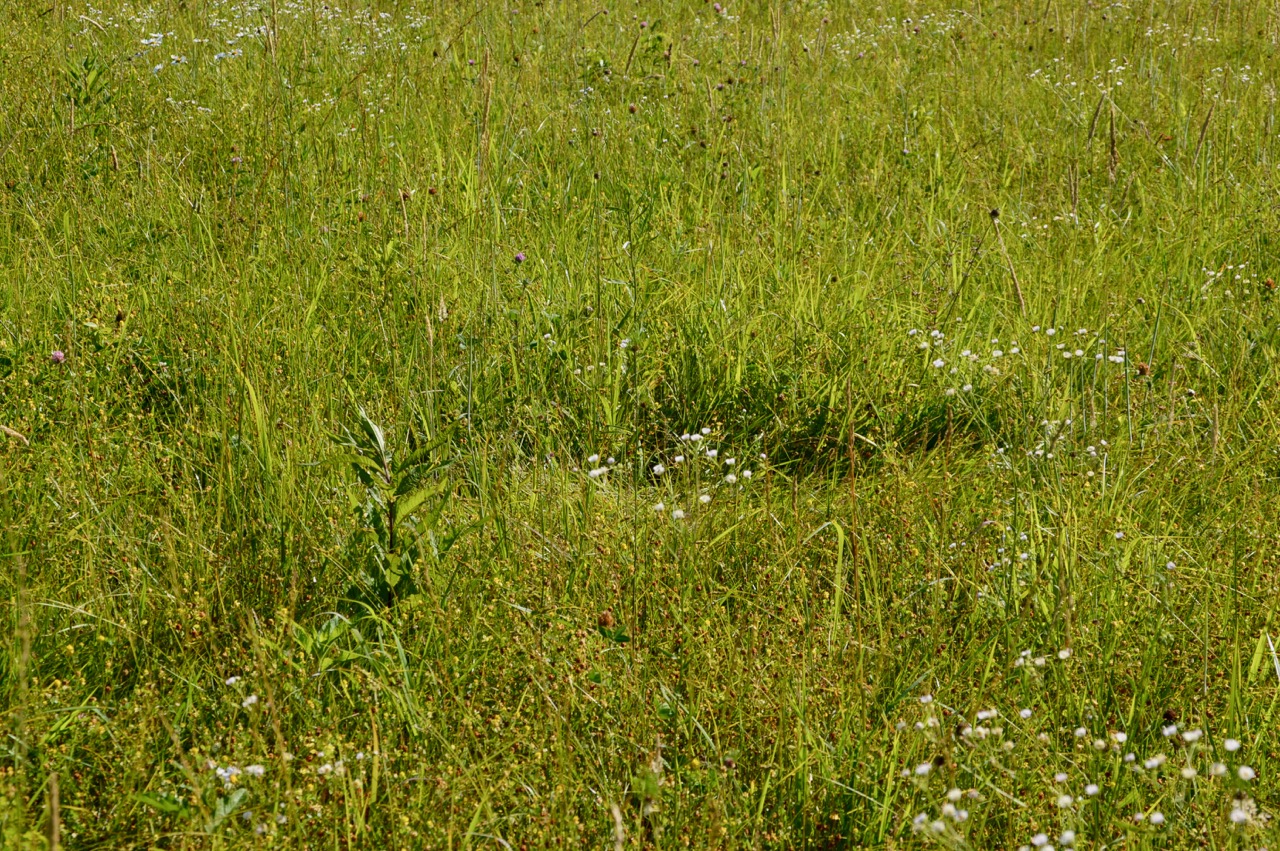 This is a 2nd spot and close to what the hounds had found. 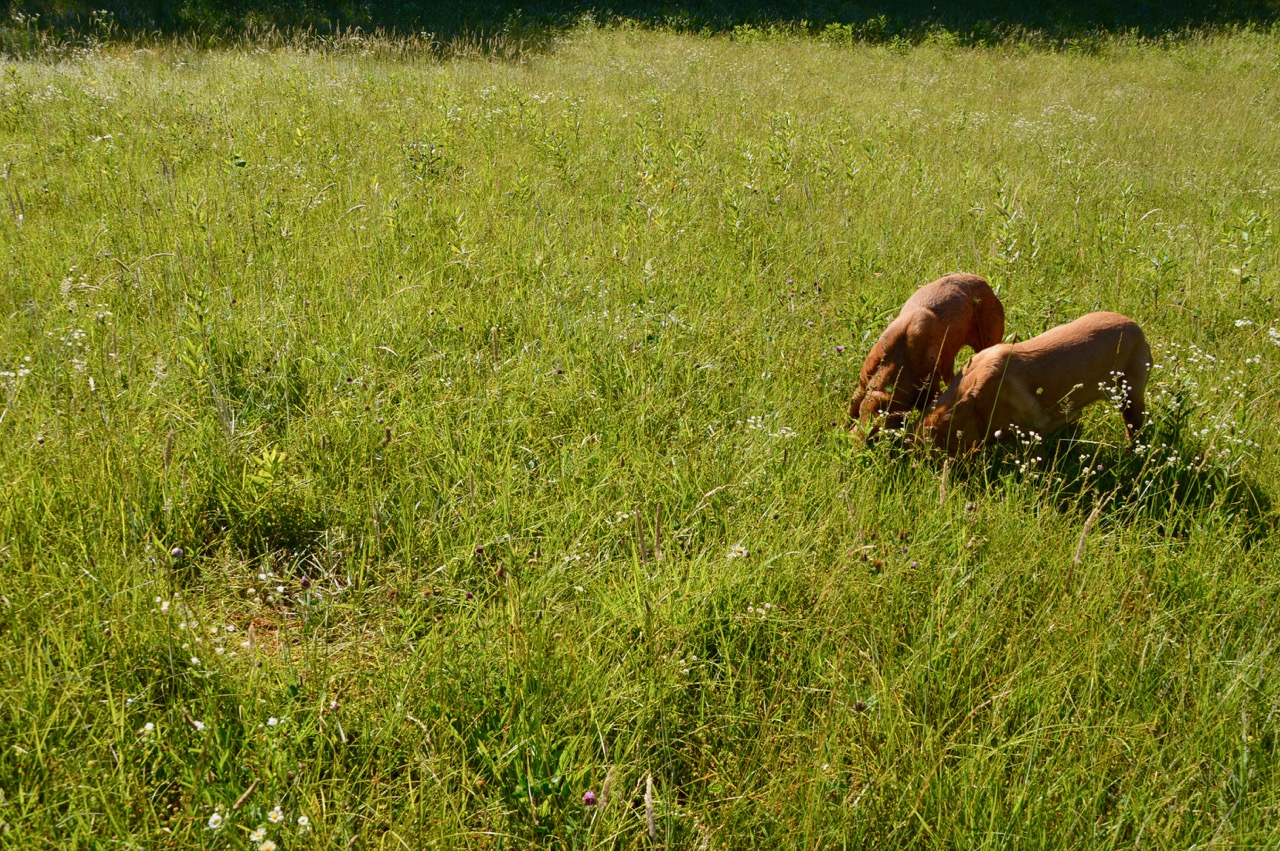 Once I said "let's go home" Sadie touched noses with Stella and they both took off at the same time and trotted up the path, almost at a slow running pace. They acted fairly happy about what they had found this morning. 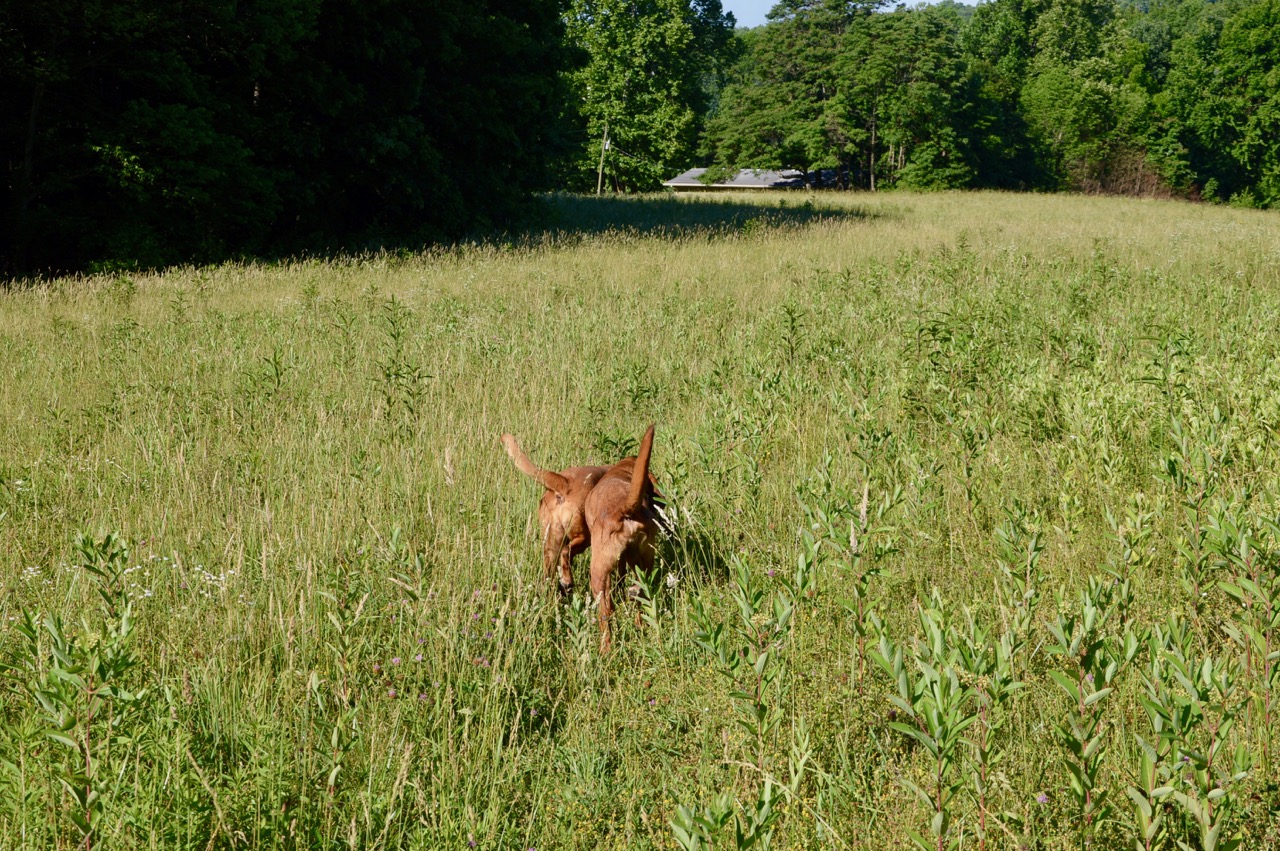 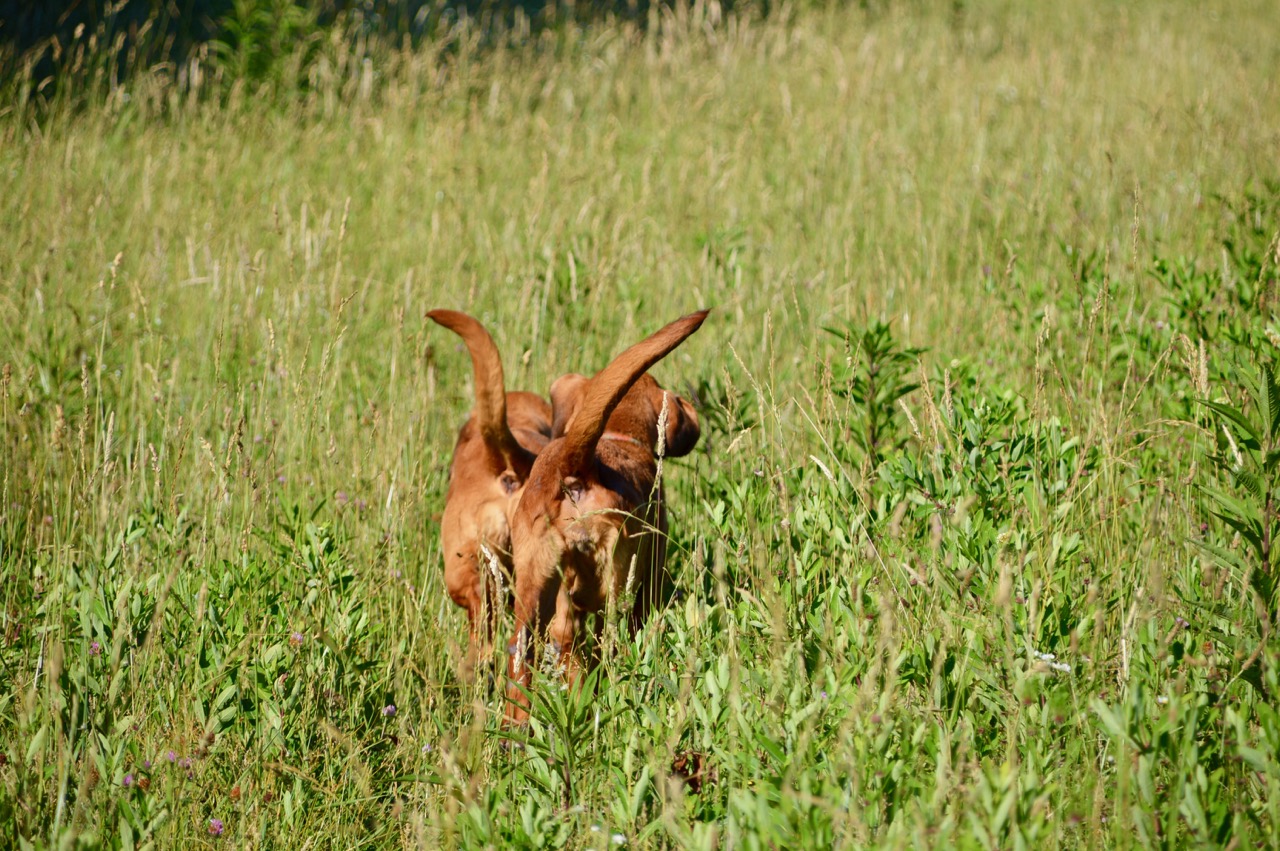 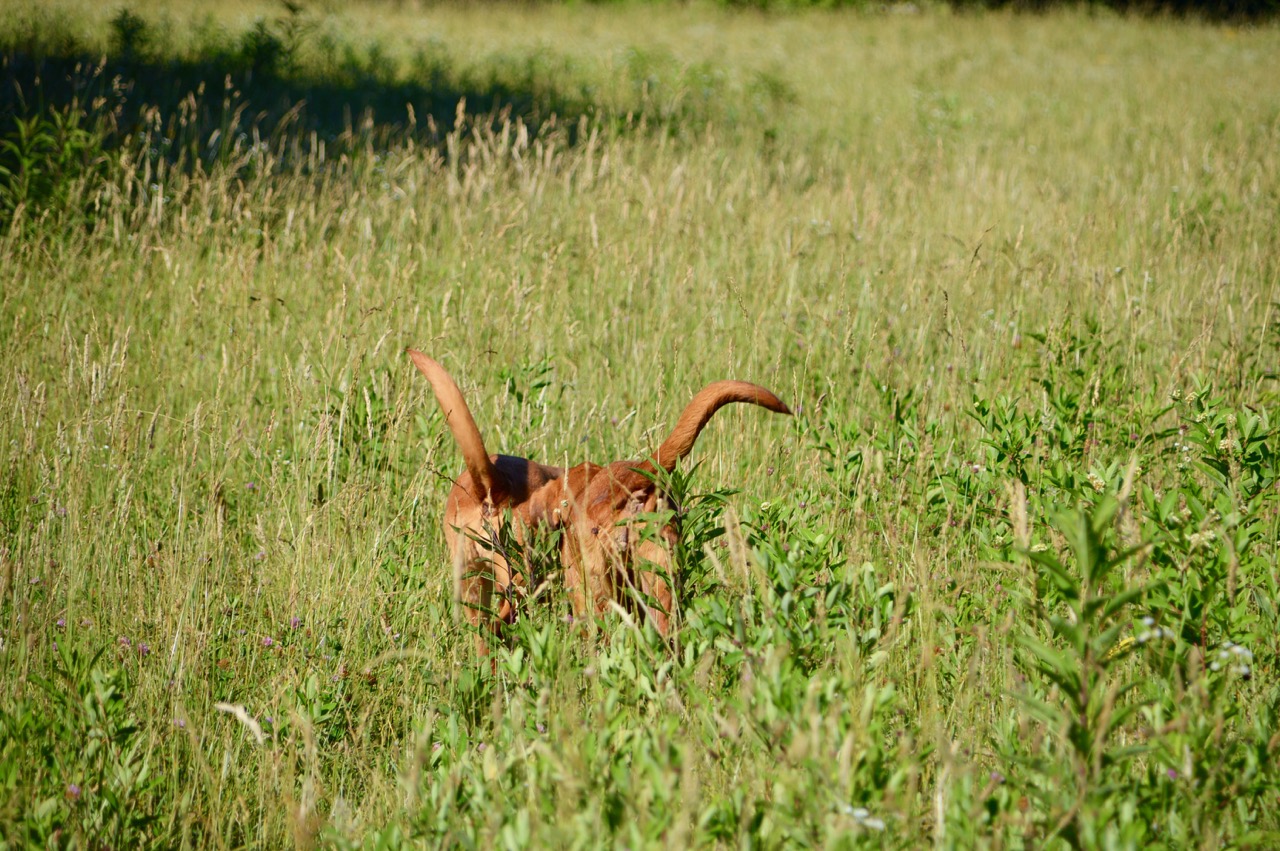 Stella showed what I would call 'normal' energy and that is a lot more than I witnessed just a month of so ago. She is becoming her old self again by being stubborn and that is her and a bloodhound's normal DNA. As the vet told me on April 21st, it will take a long time for her regain her weight and possibly her normal energy levels. Heidi did it when times looked hopeless and I hope that Stella can also.

I am trying something different today out of curiosity ... I am going to try to carry my iPhone as much as possible today to get a better count for the number of steps I take per day and how far I walk per day ... even inside the house. I've been thinking about buying an Apple Watch Series 2 but can't come to a confirmed decision. My friend uses an app called Strava on his iPhone for his exercise and I noticed that is the main app that is used by people that wear an Apple Watch for the same tracking.

I have looked at other fitness trackers but have found too many, in my mind, negative comments. Of course that is the same with most anything that is electronic that I consider buying.

We will only have a couple of more days with lower temps before the windows are closed again and the AC turned on starting this weekend. It will be about a week of temps back in the 90's. Sadie will still be requesting three different walks per day.