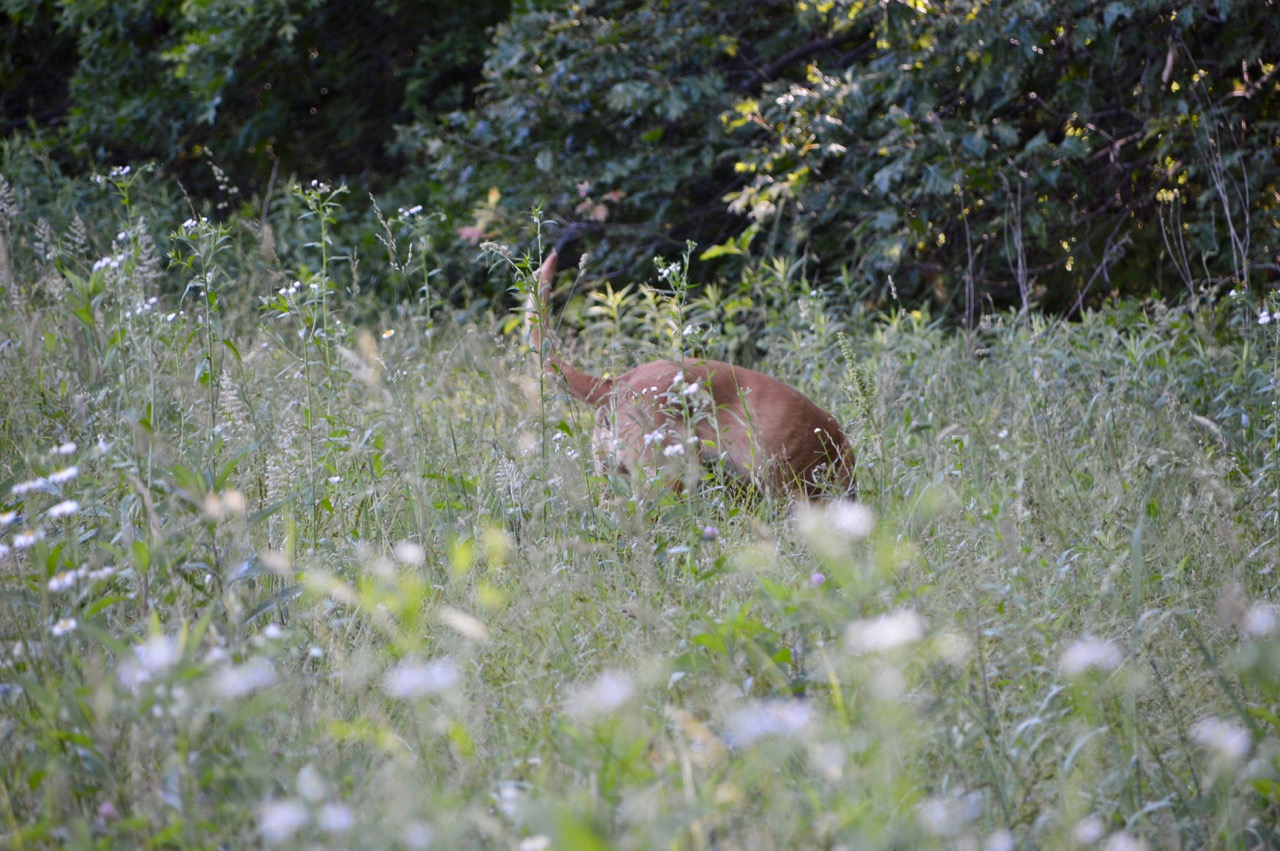 It was the normal calm daily morning walk with the bloodhounds, starting with wet grass while in the shade and not quite as wet out in the sunshine. In the past it has been deer that lead the hounds to an immediate sprint and a chase ... but today there were 4-5 small birds flying just above Sadie like a WWII fighter planes in a dogfight that drove her to edge of insanity. 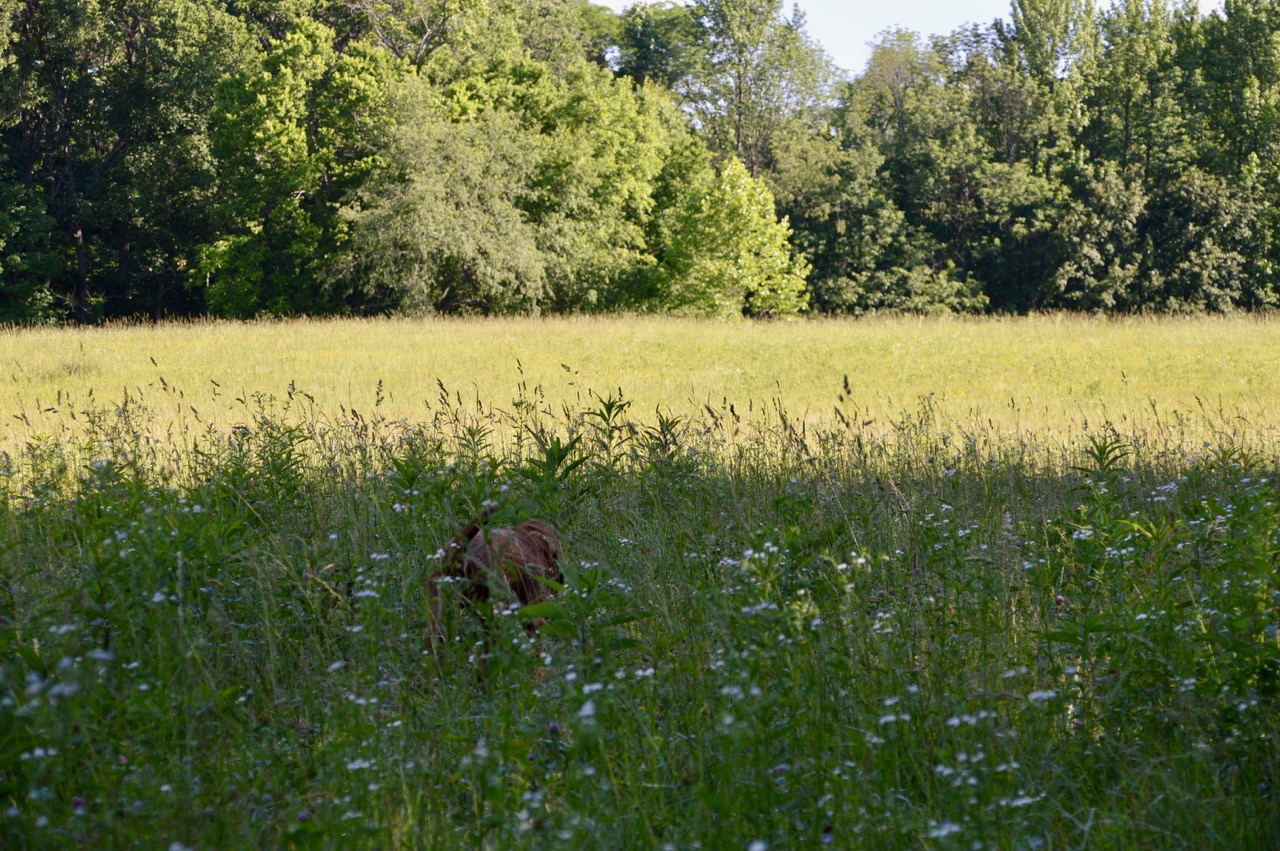 We started the walk with Stella leading the way on the left side. That has been her recent path and then close to the first turn she will veer right to join Sadie and I. Since we only took two walks yesterday instead of three, she may have had a little extra energy today. 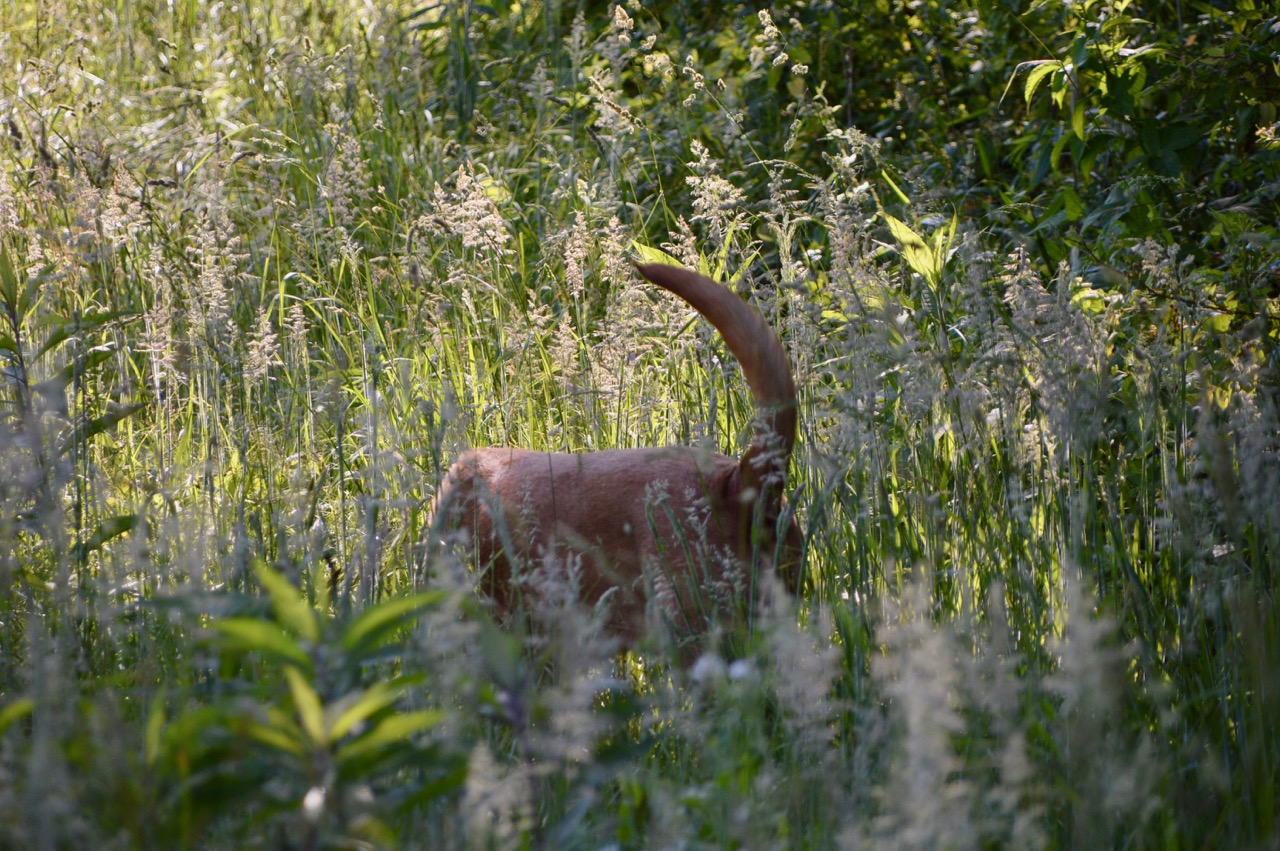 Sadie did her normal investigation along the edge of the field and woods. With the hay and other stuff growing taller you can see a distinct path of where the deer travel through the night or early morning hours. 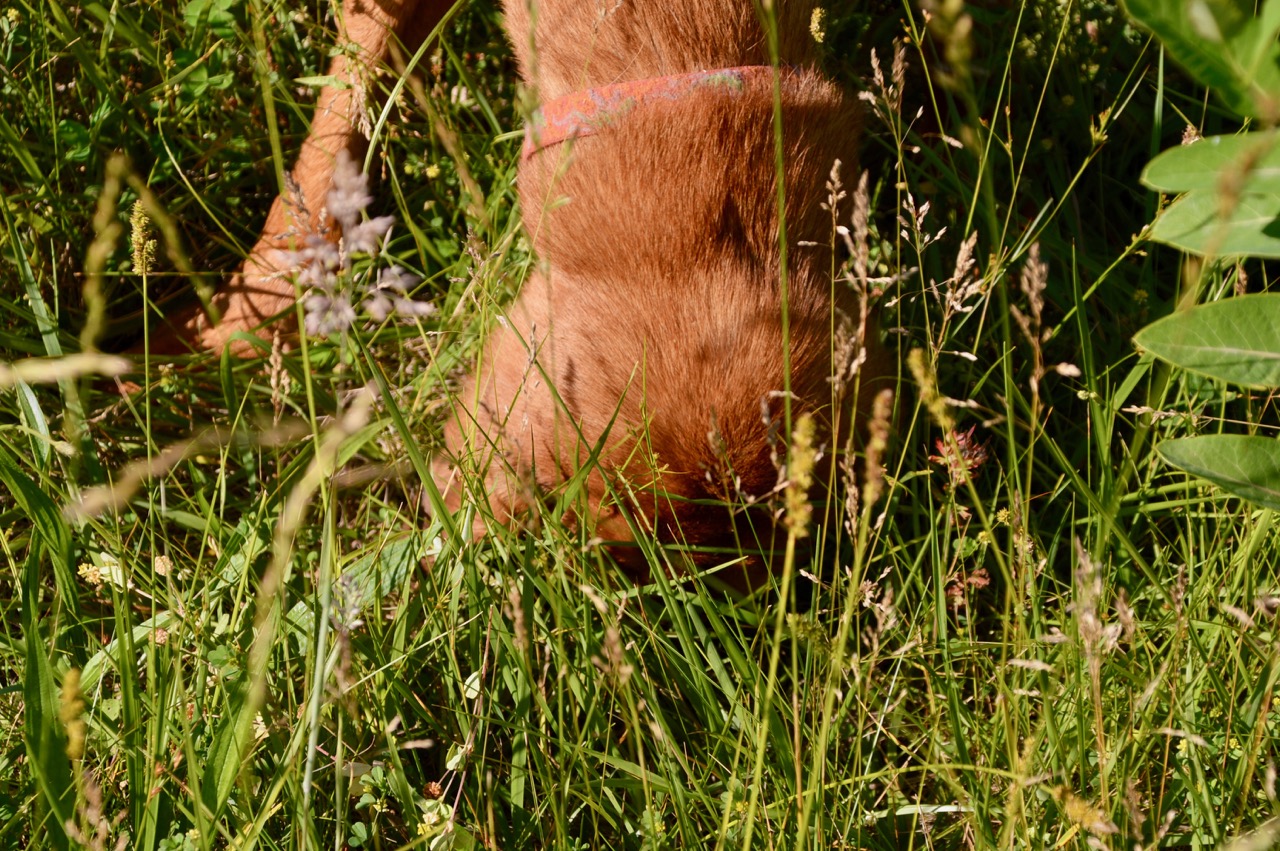 Stella is no longer interested in chasing deer (missed last chase), nor chasing birds ... it seems she only walks in the field to find and eat deer scat. In spots like this she will ignore everything I say and will not budge even when I say 'let's go' or tug at her collar. 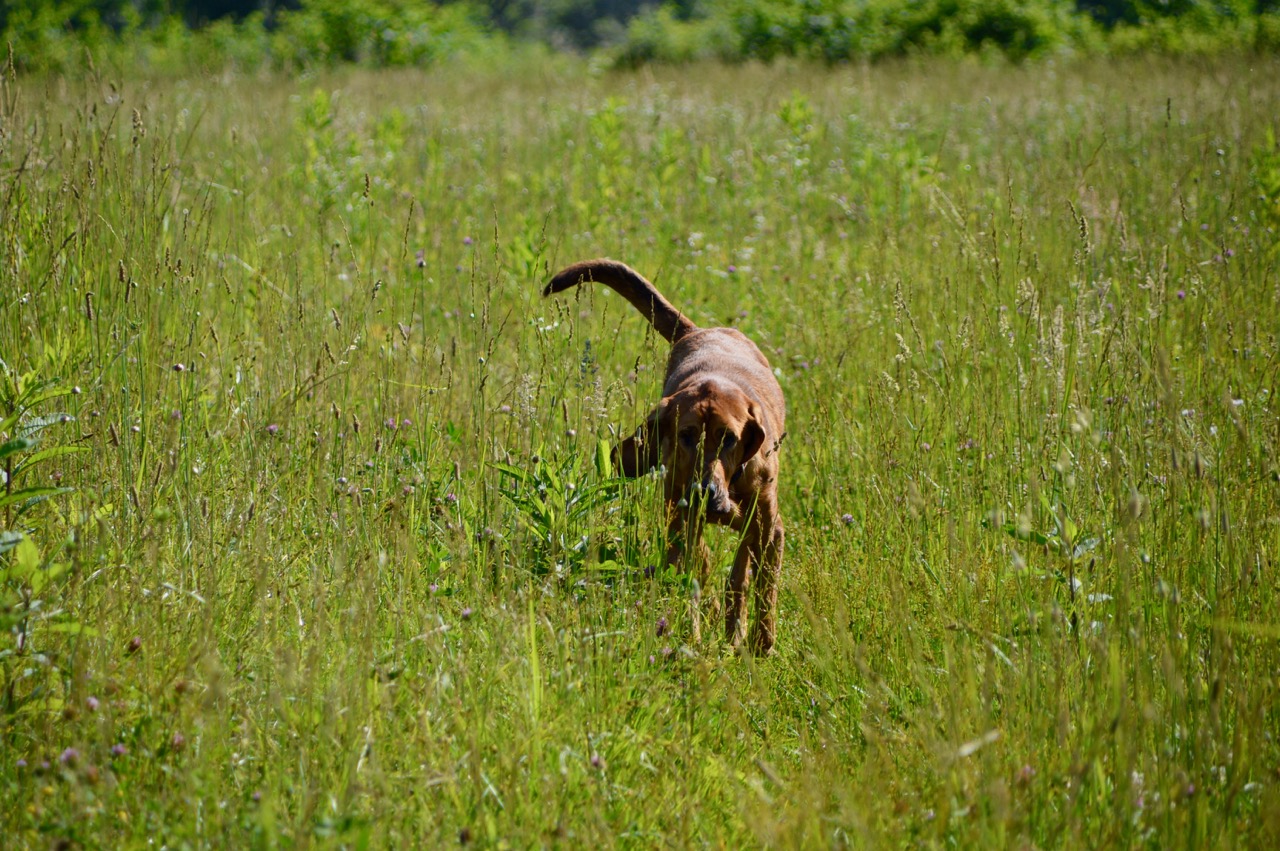 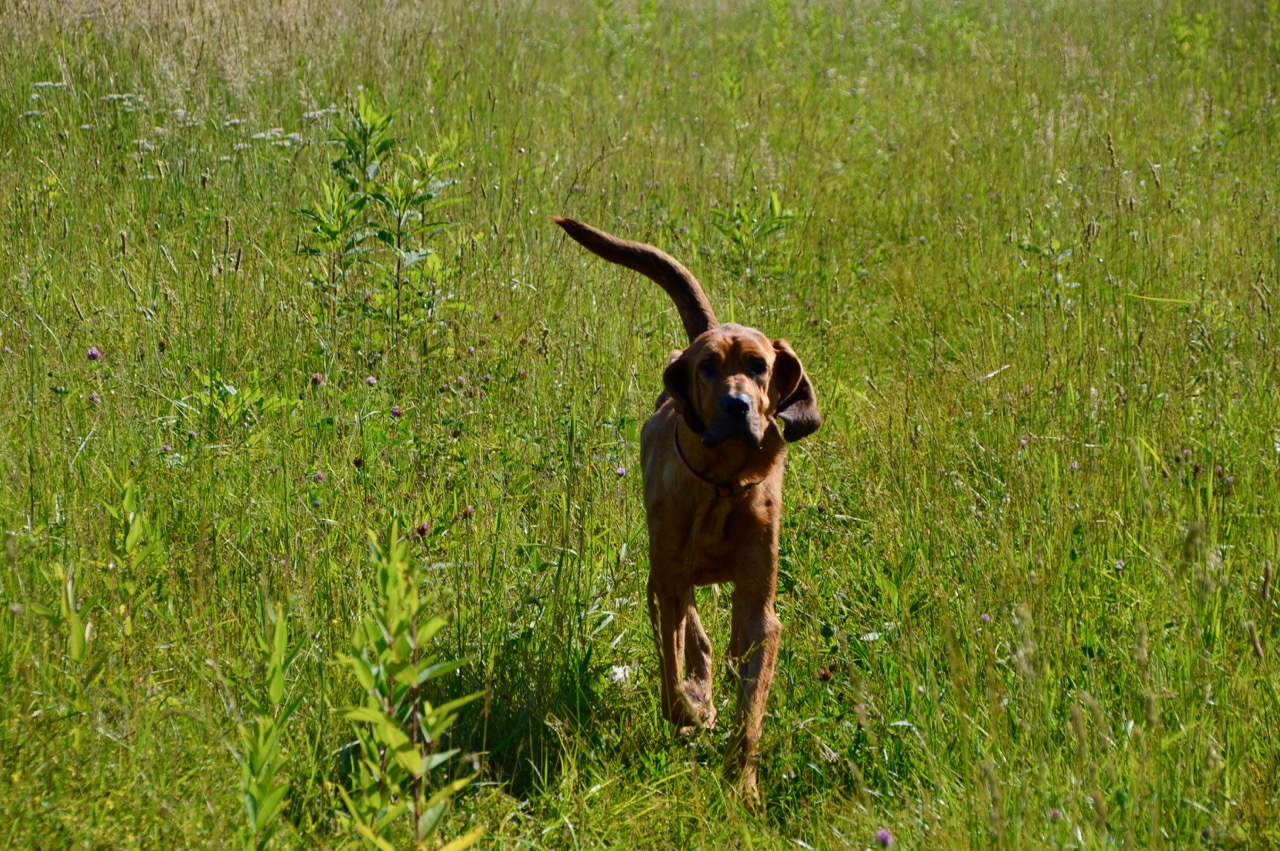 One the way back home, she did get a little trotting in but no high speed runs like she used to. That was until today, although it was a short burst of speed. 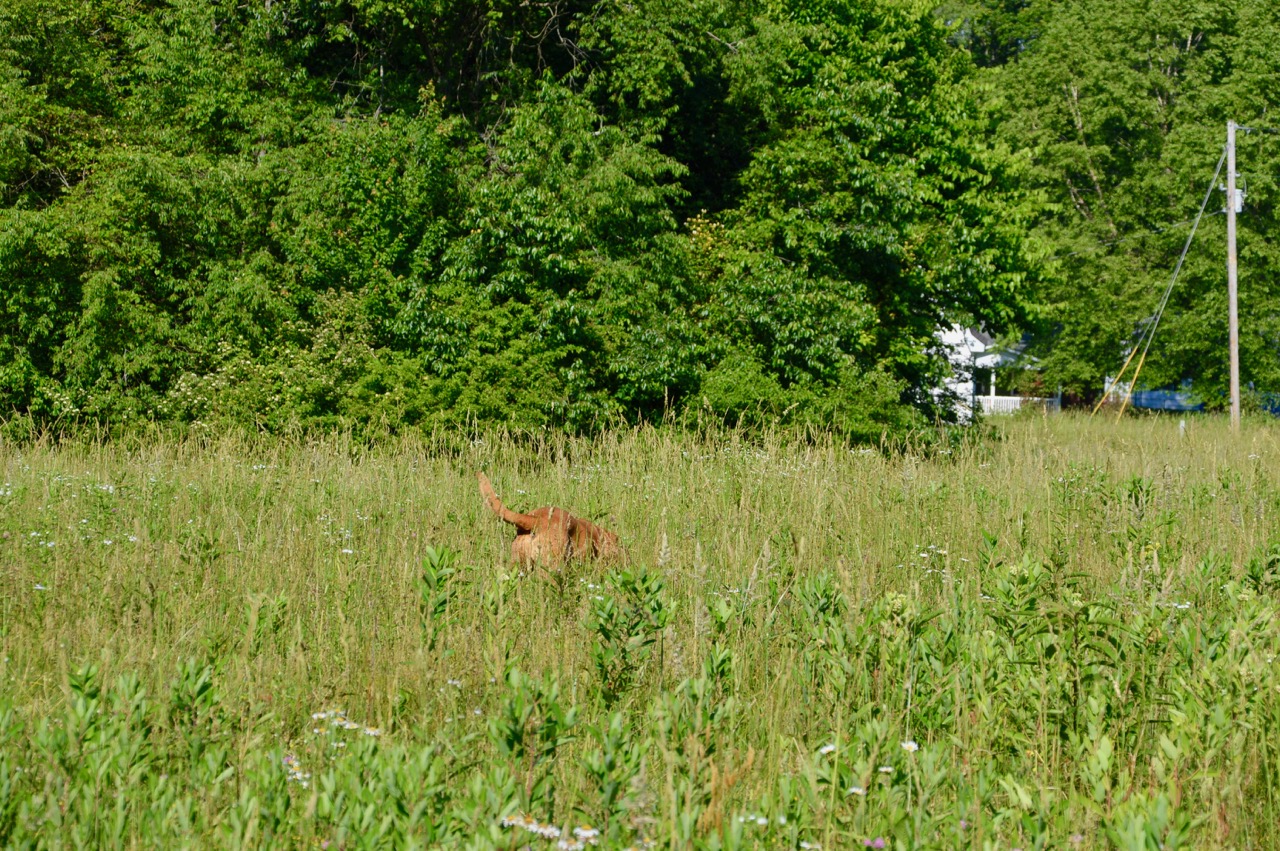 They were both walk along 5' feet to my right side, when Sadie does an unusual bark and takes off sprinting full speed. I saw no deer anywhere in sight and whatever she was chasing was at ground level. Before I could barely get the camera up and focused, Stella sprinted after Sadie but slowed down soon after reaching her. 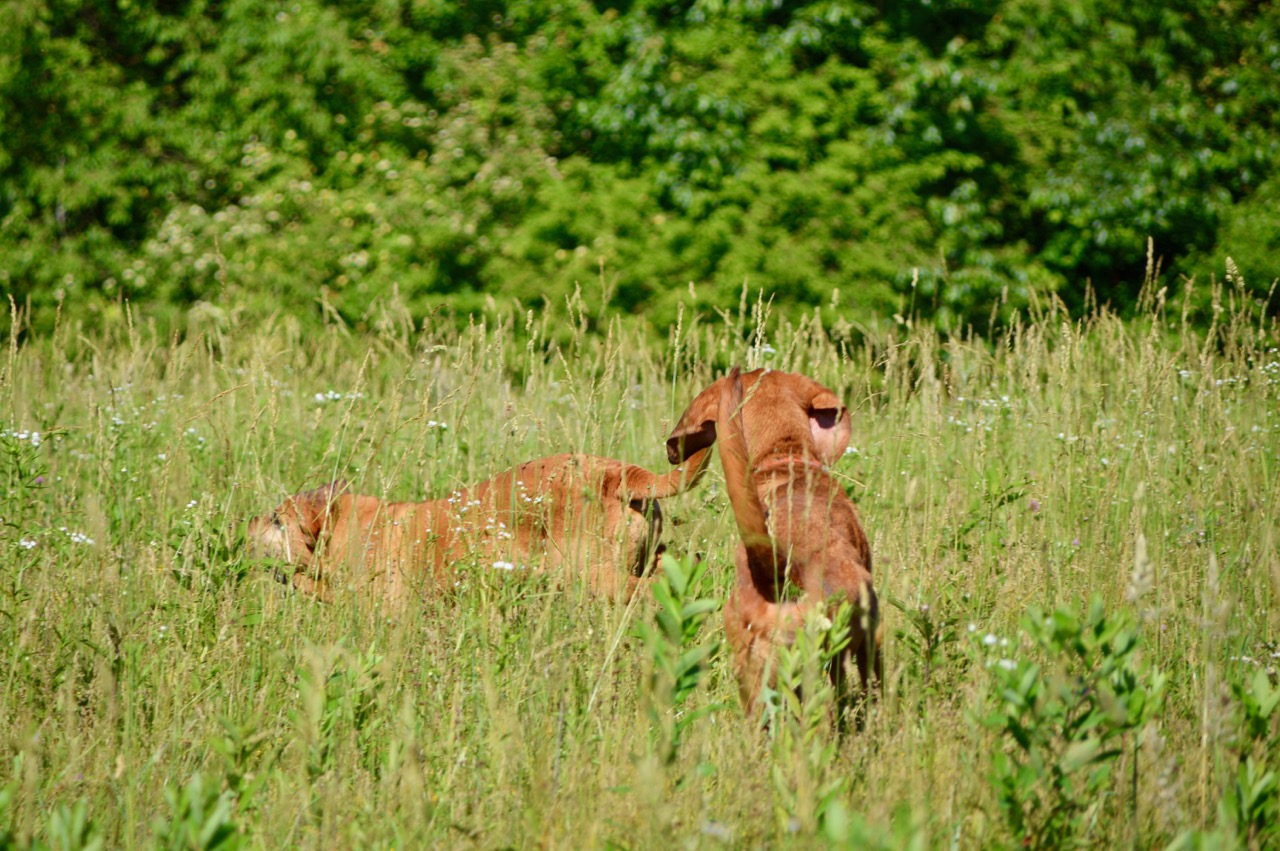 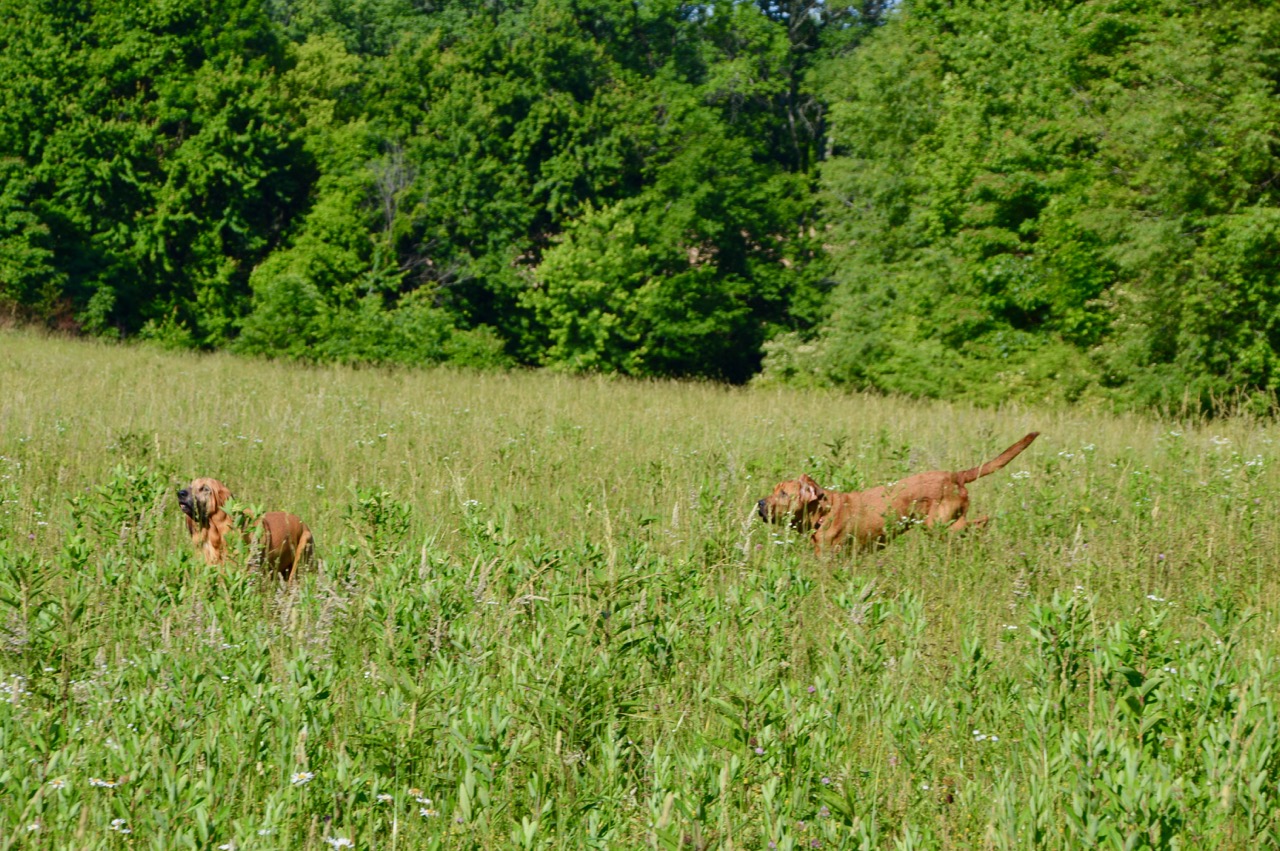 During this time as I was trying to catch Sadie's chase on camera, I did not see anything that she was chasing ... to the point I was a little confused. 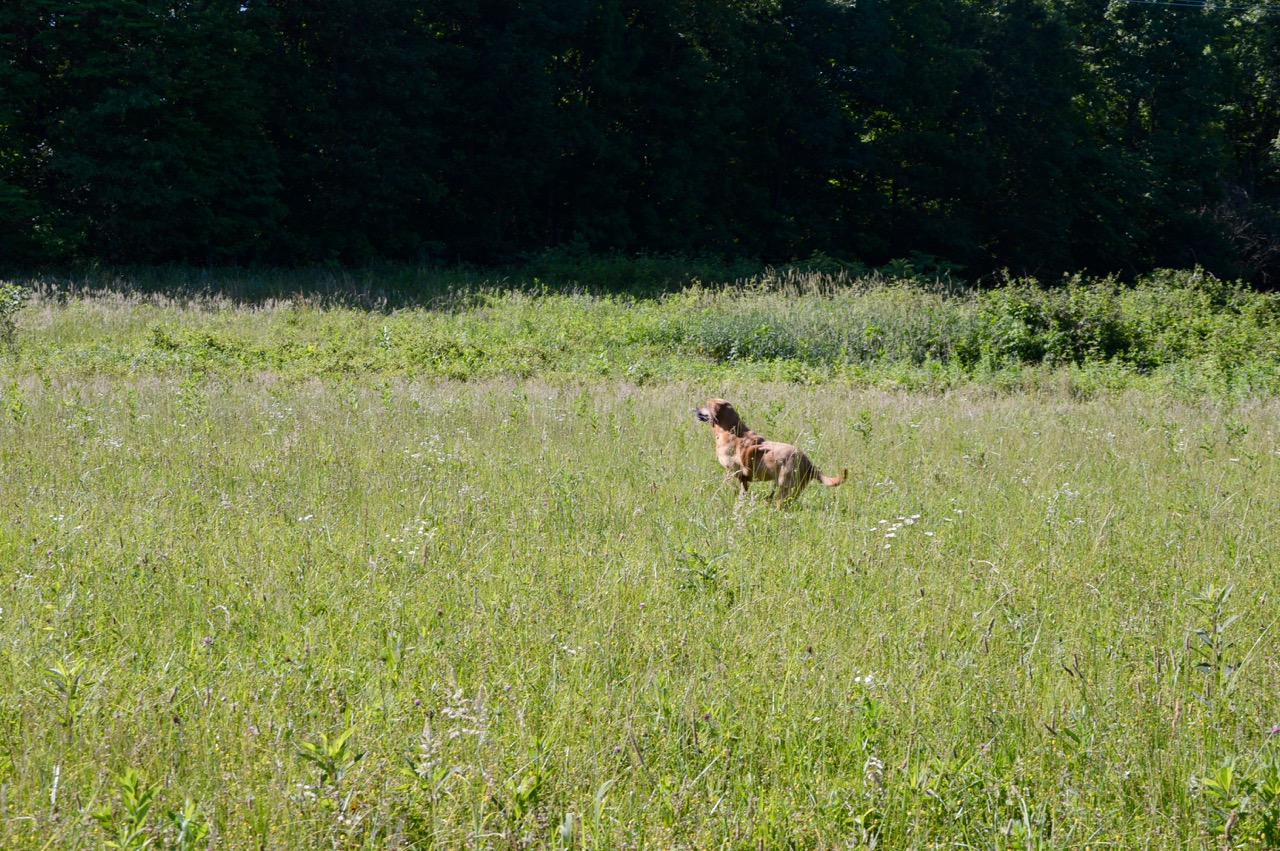 Here Sadie as sprinted from the middle of the field back close to the far right corner where we past during our walks. By this time Stella was totally out of the chase, slowly walking back to that place she never moves. She stayed there all through Sadie's chase and until I walked over to get her to move.

Picture 4-5 small birds flying and darting all over the sky just above Sadie's head as she sprinted after them all over the field. Sadie never stopped one time after the chase started, until the end. 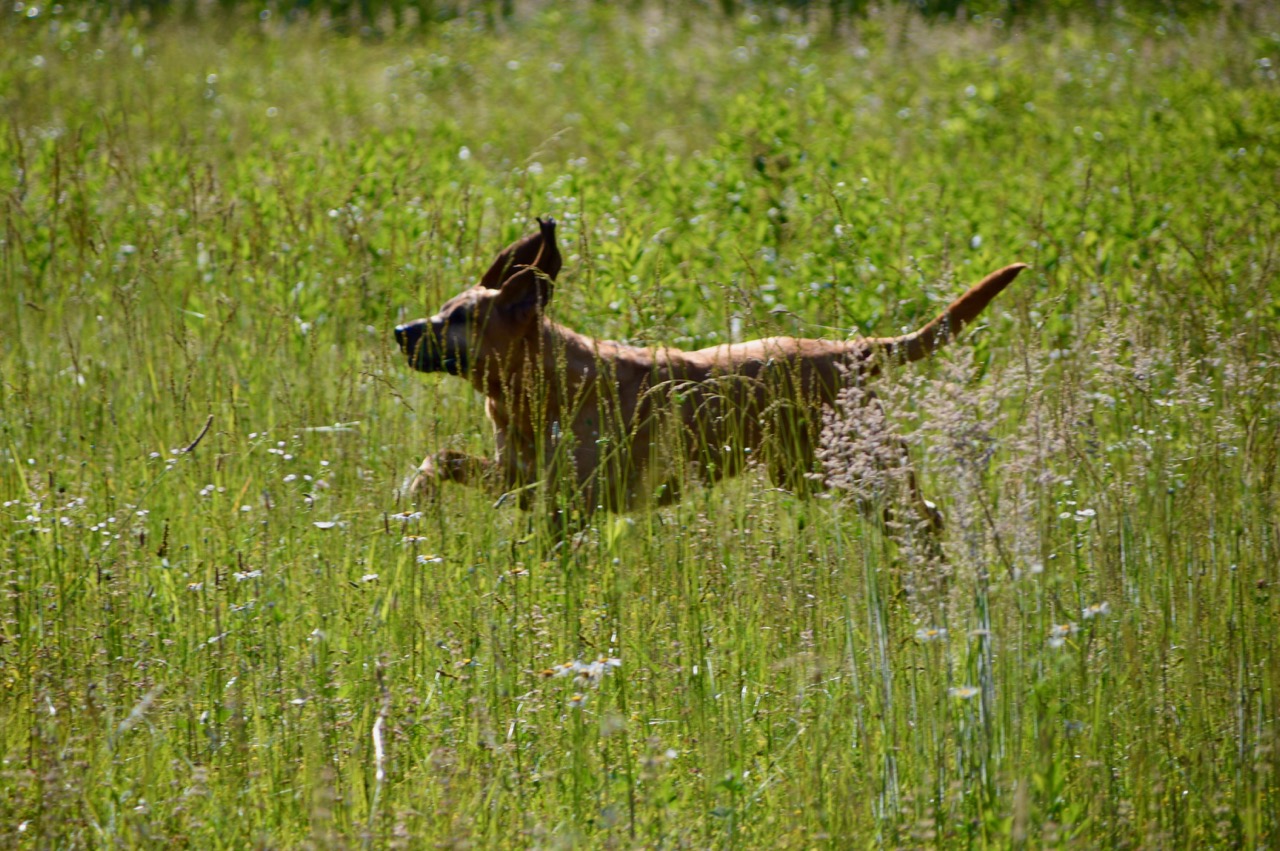 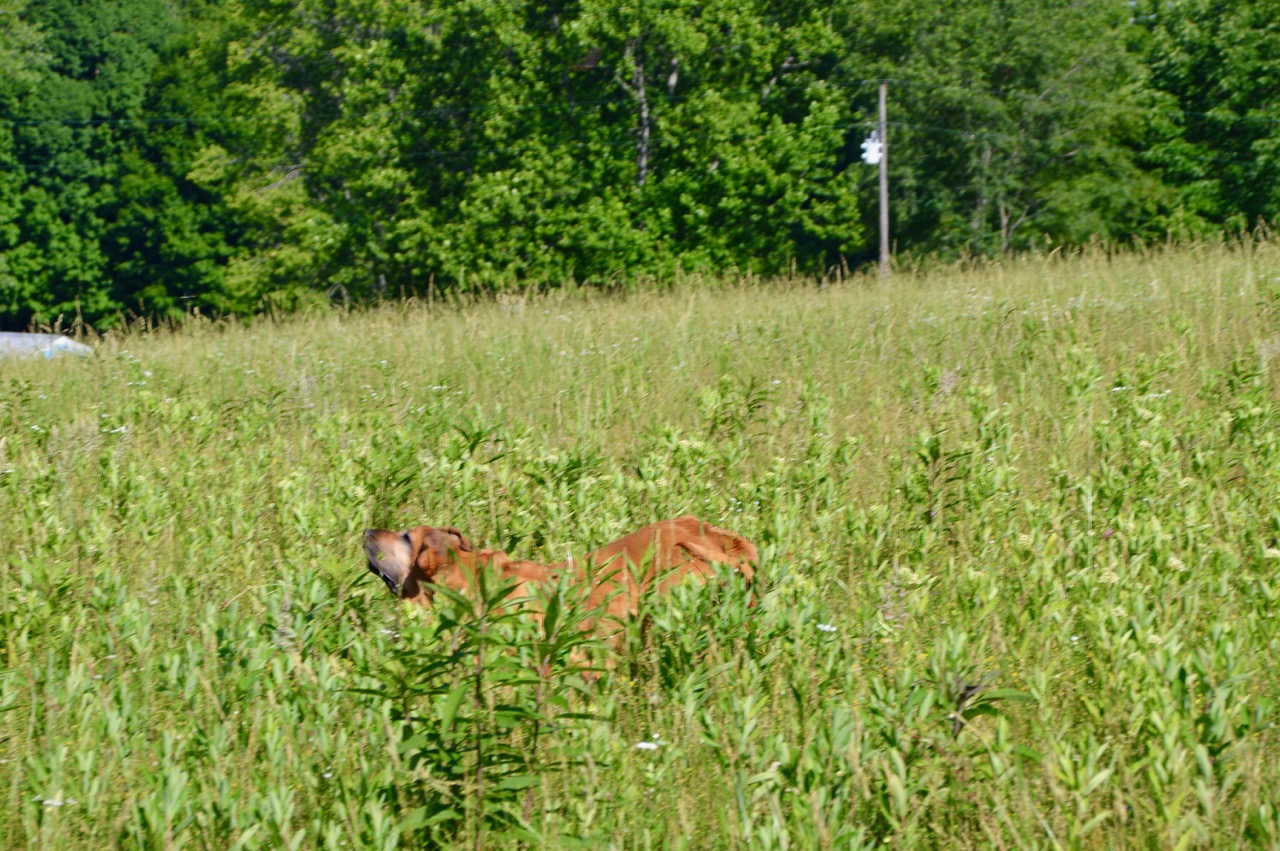 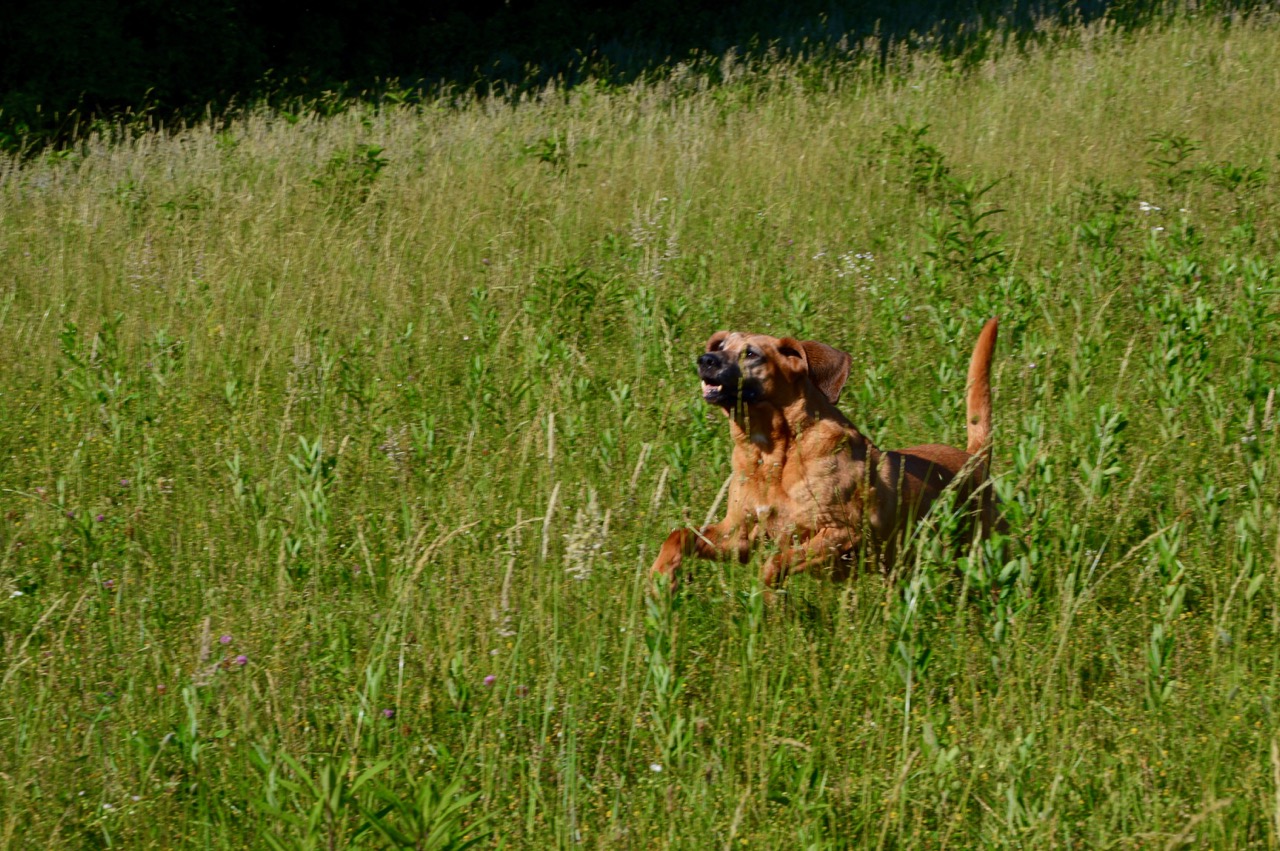 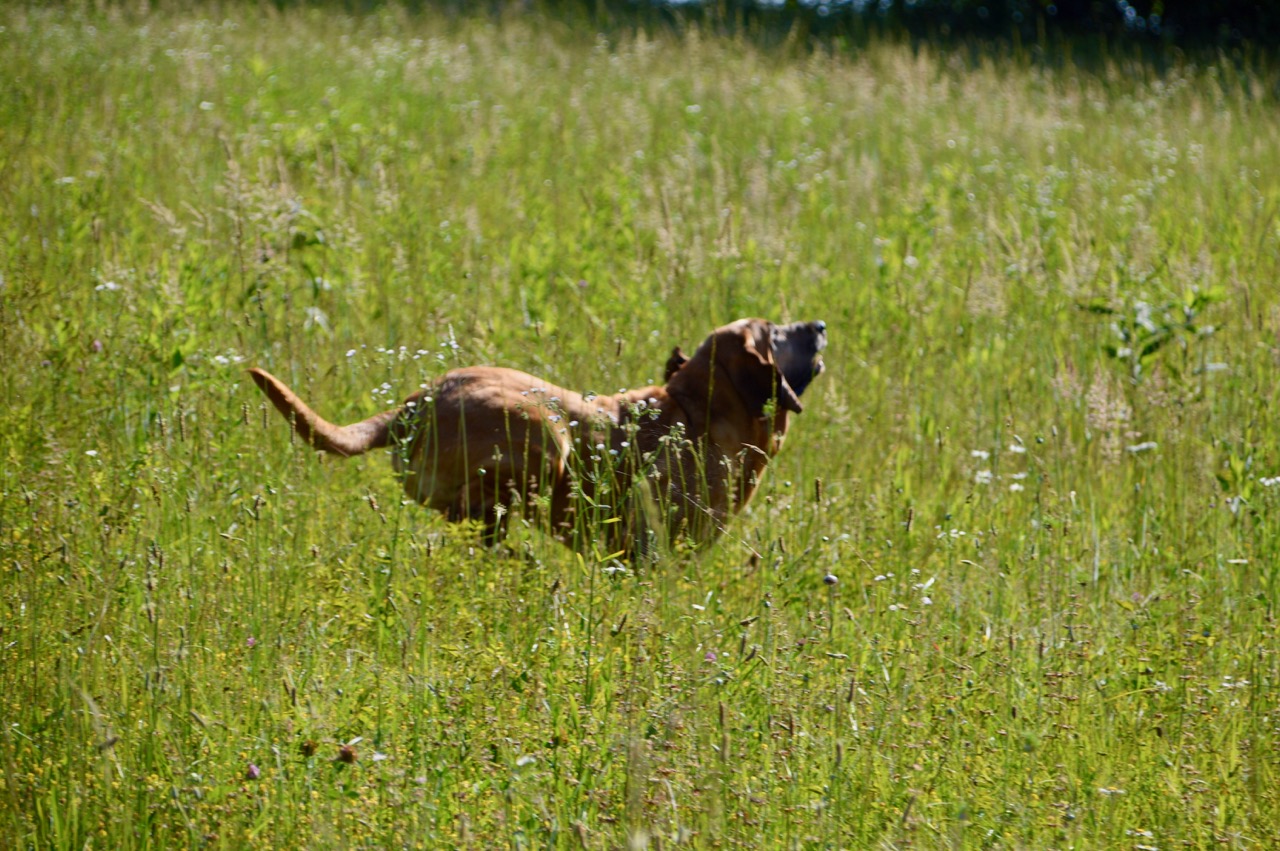 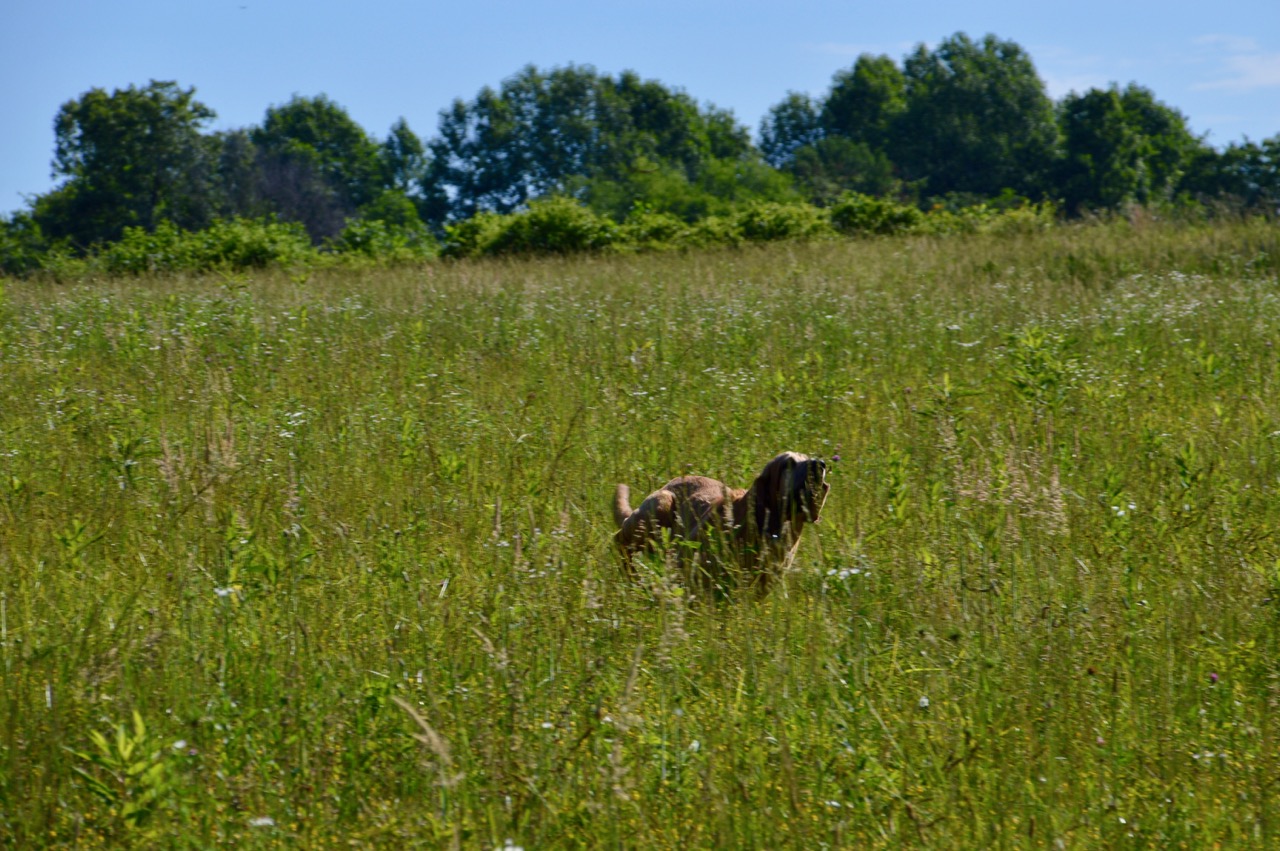 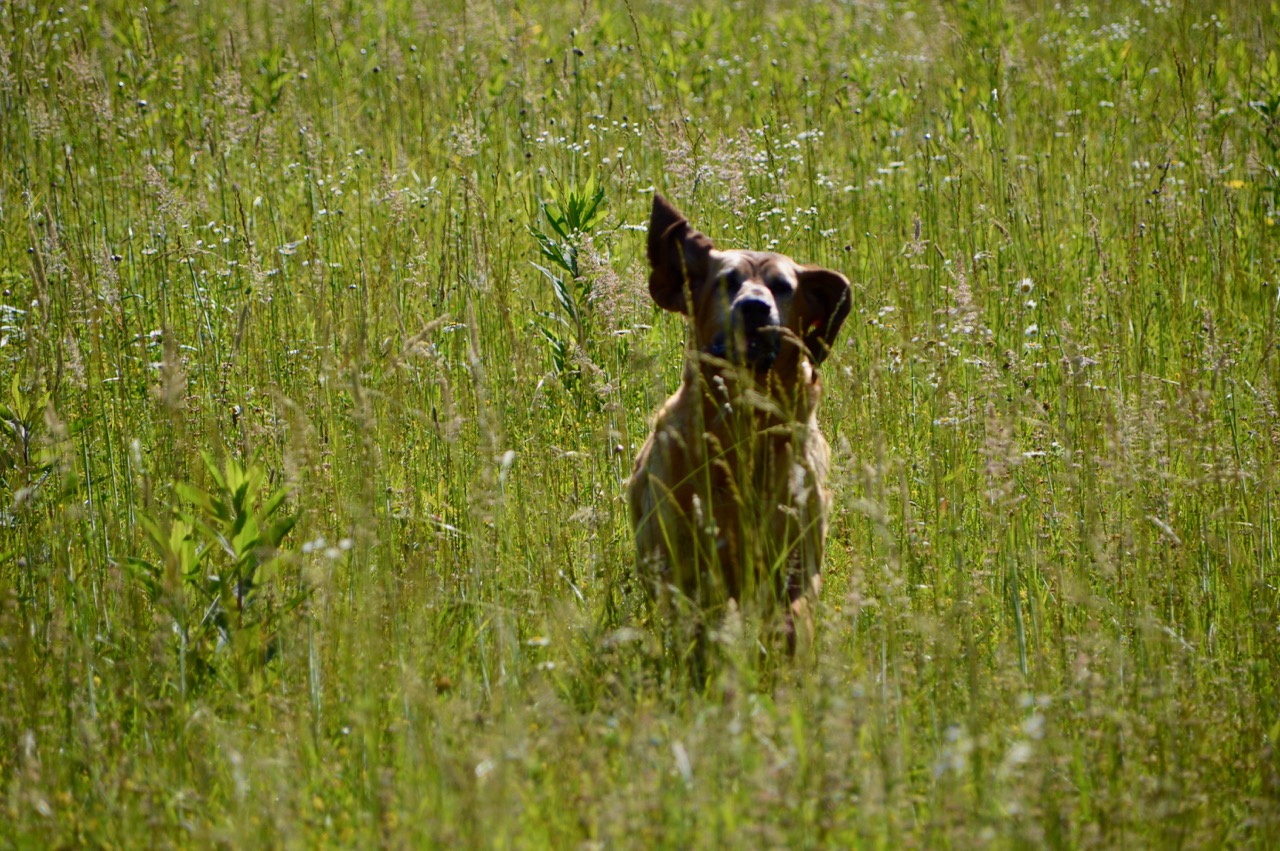 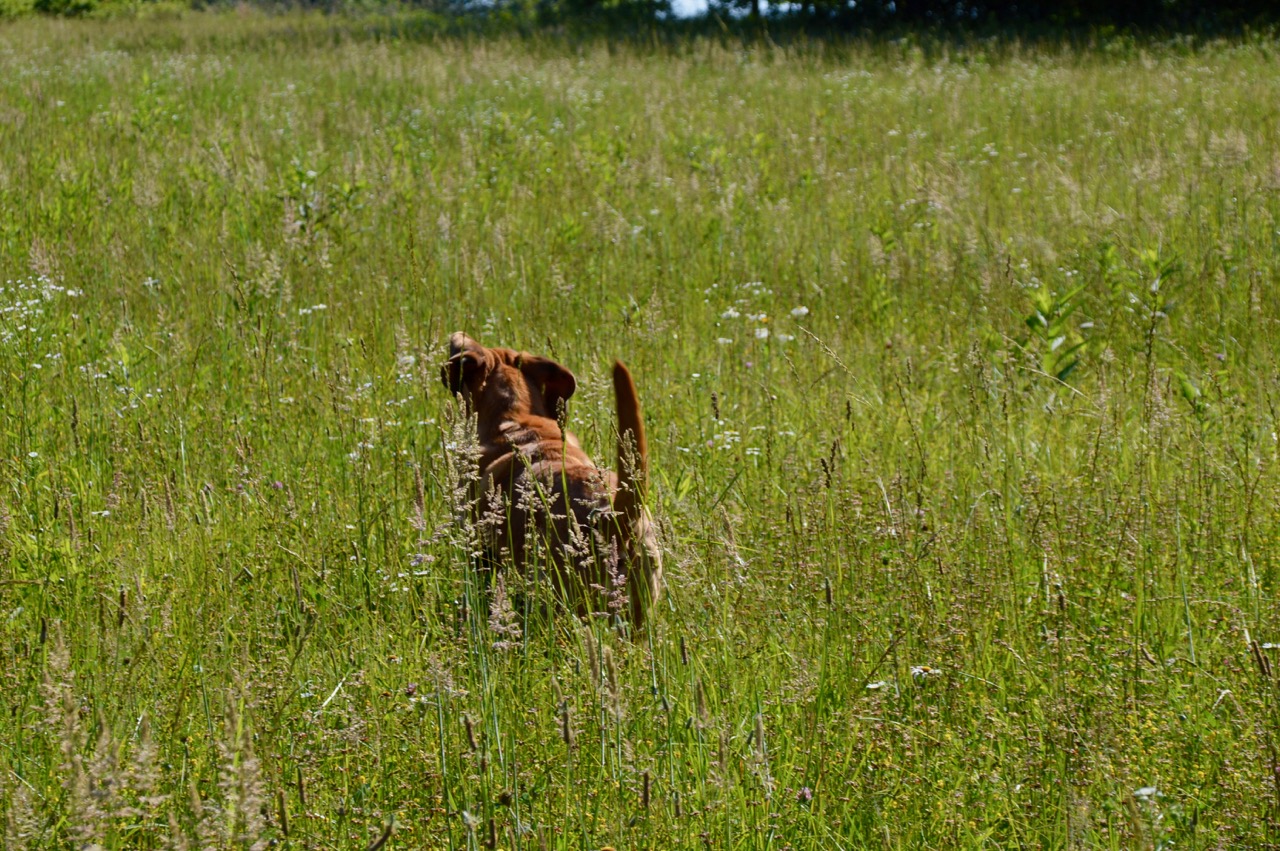 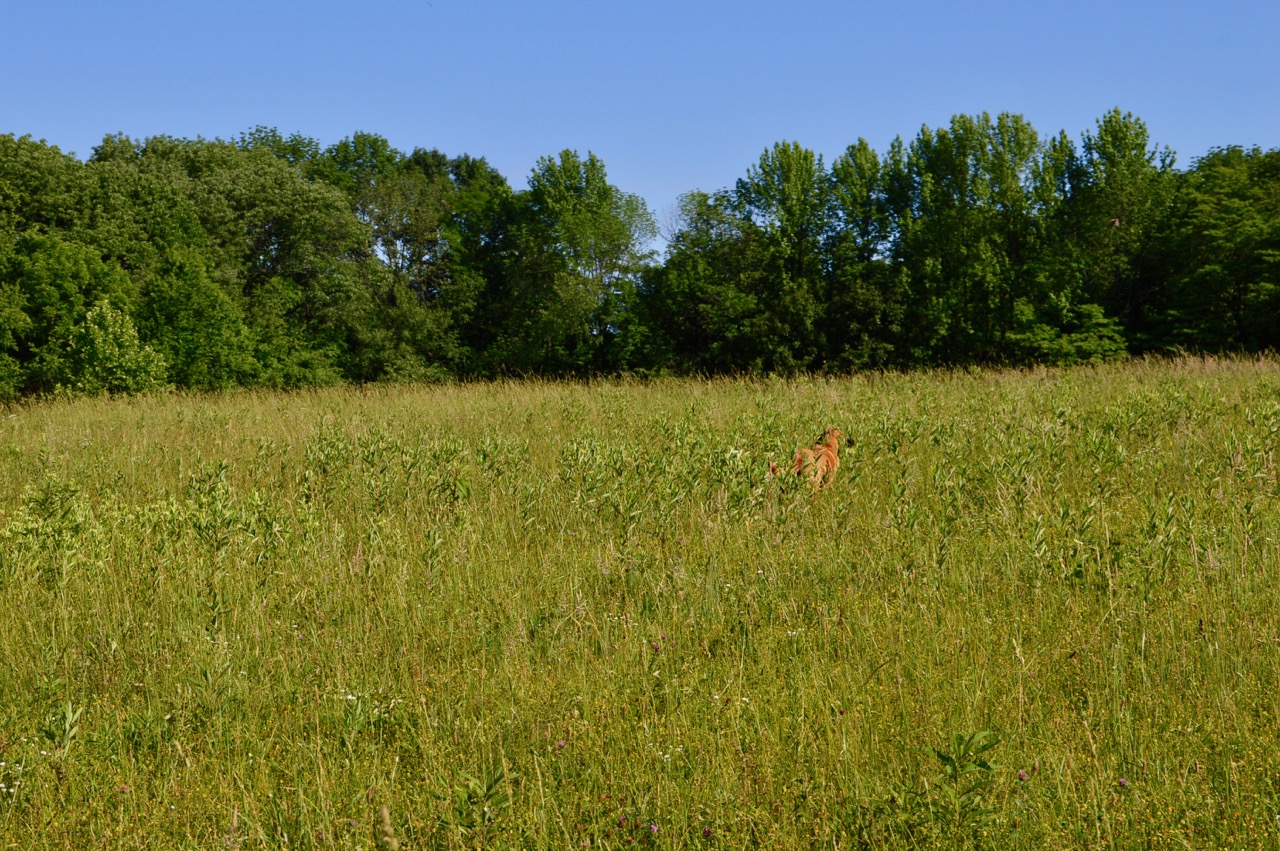 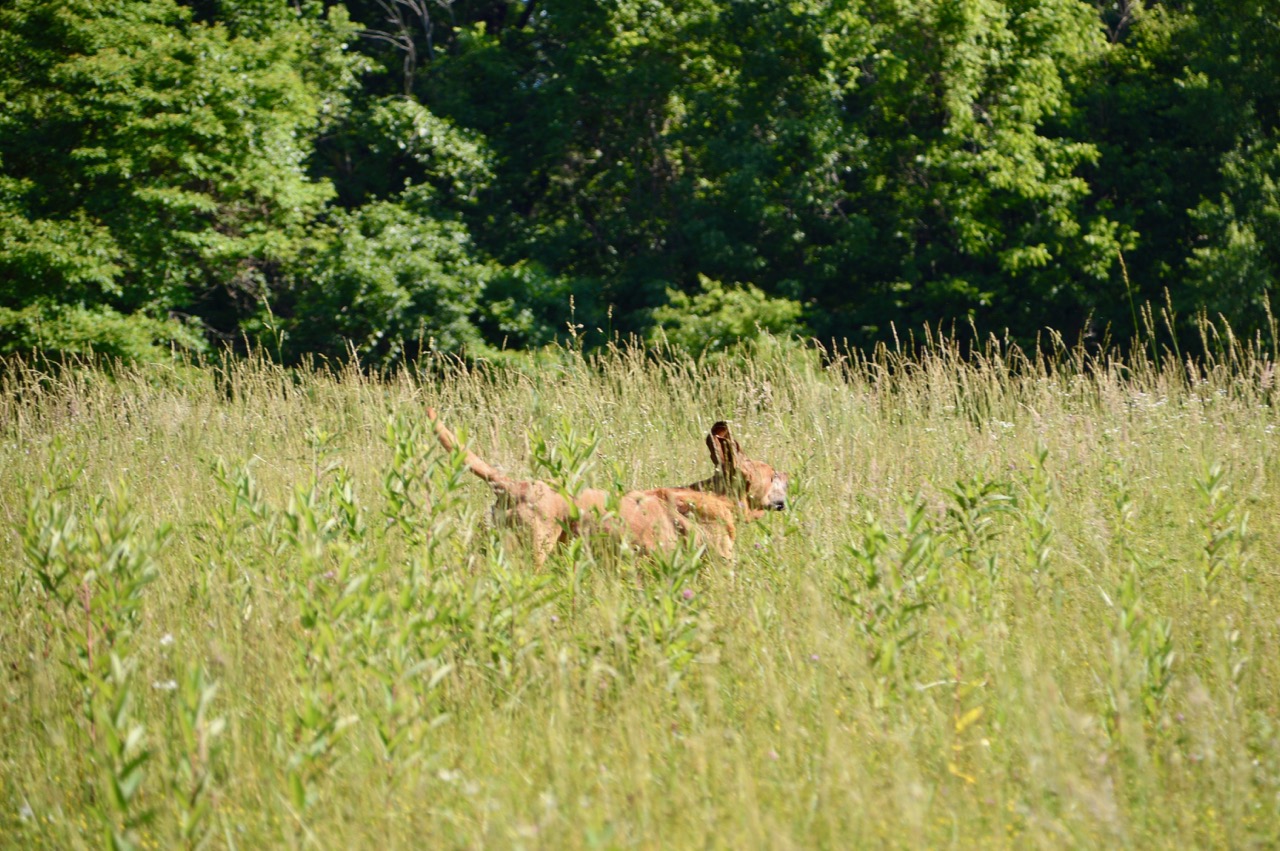 Those pictures don't capture how fast Sadie was running. 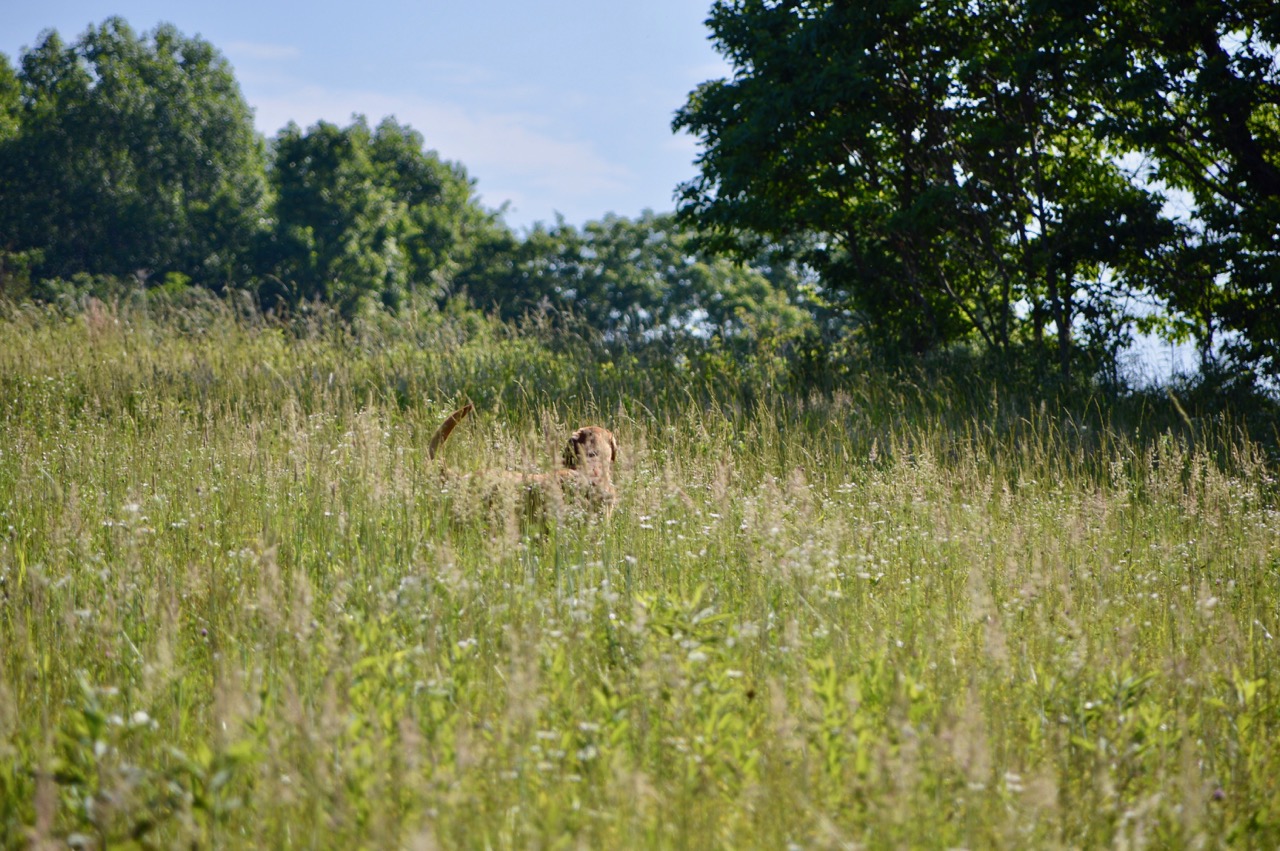 Then the birds were gone ... Sadie watched as they flew NE over the next field behind us. 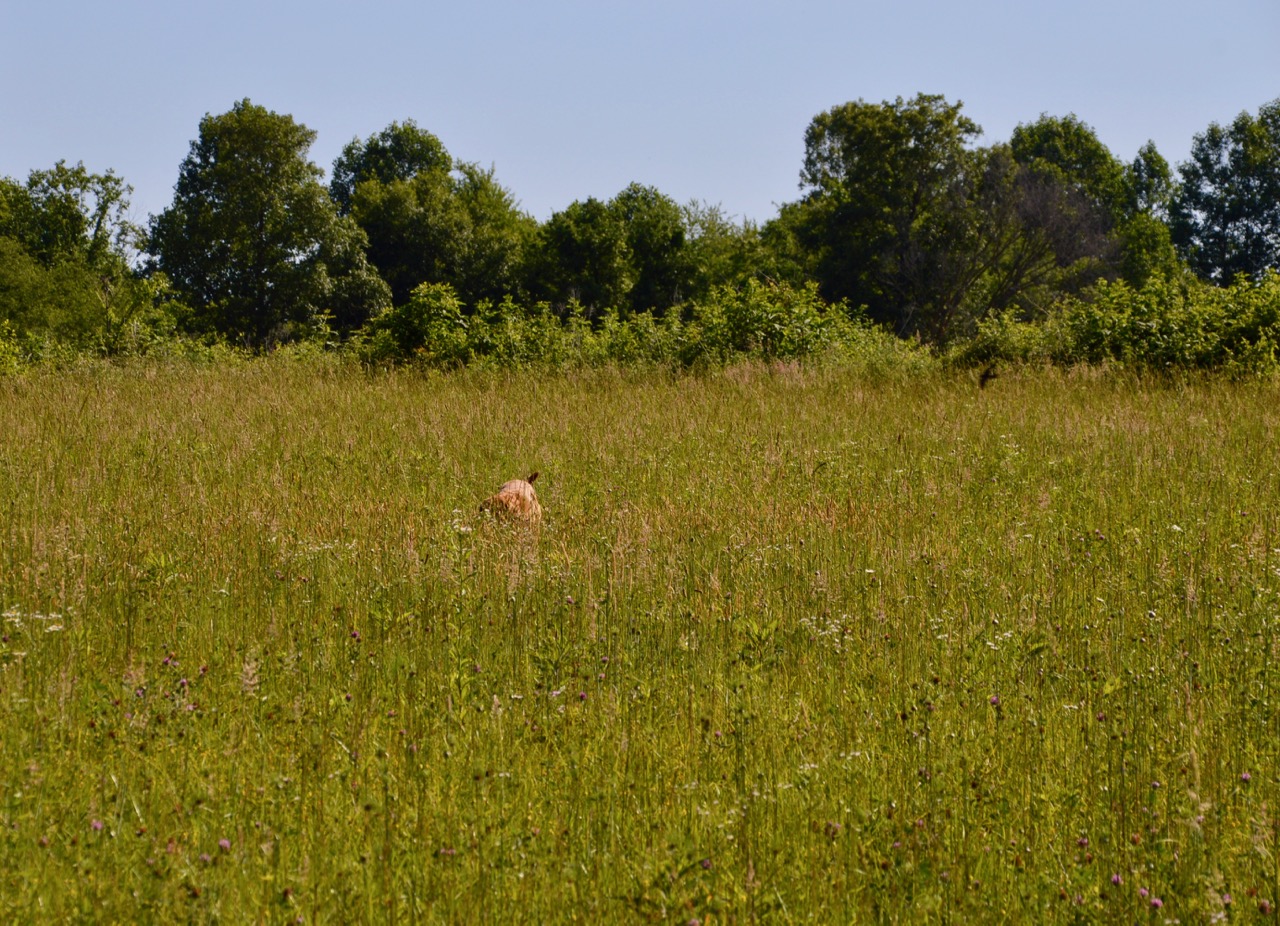 She still made sure not a bird was left before she ran back to me. 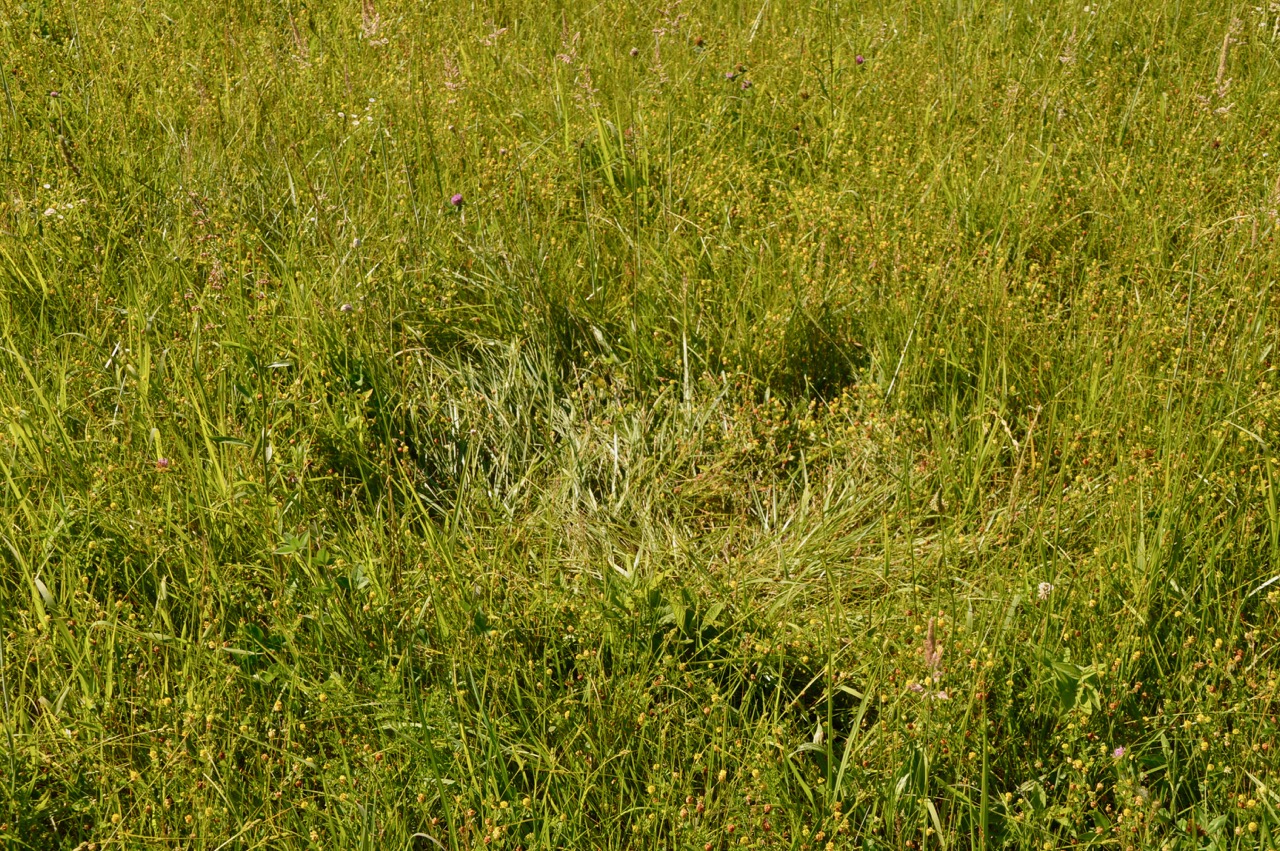 While walking from where I was directly to Stella I ran onto a spot toward the back/middle of the field where it looks like a possible deer bed. With the shaded area on our return path still very wet, these past few days the hounds and I have been staying in the sunshine, walking in the directly to the north side of the yard. Stella likes the new path in that part of the field and in the meantime I found a few new flowers to photograph. 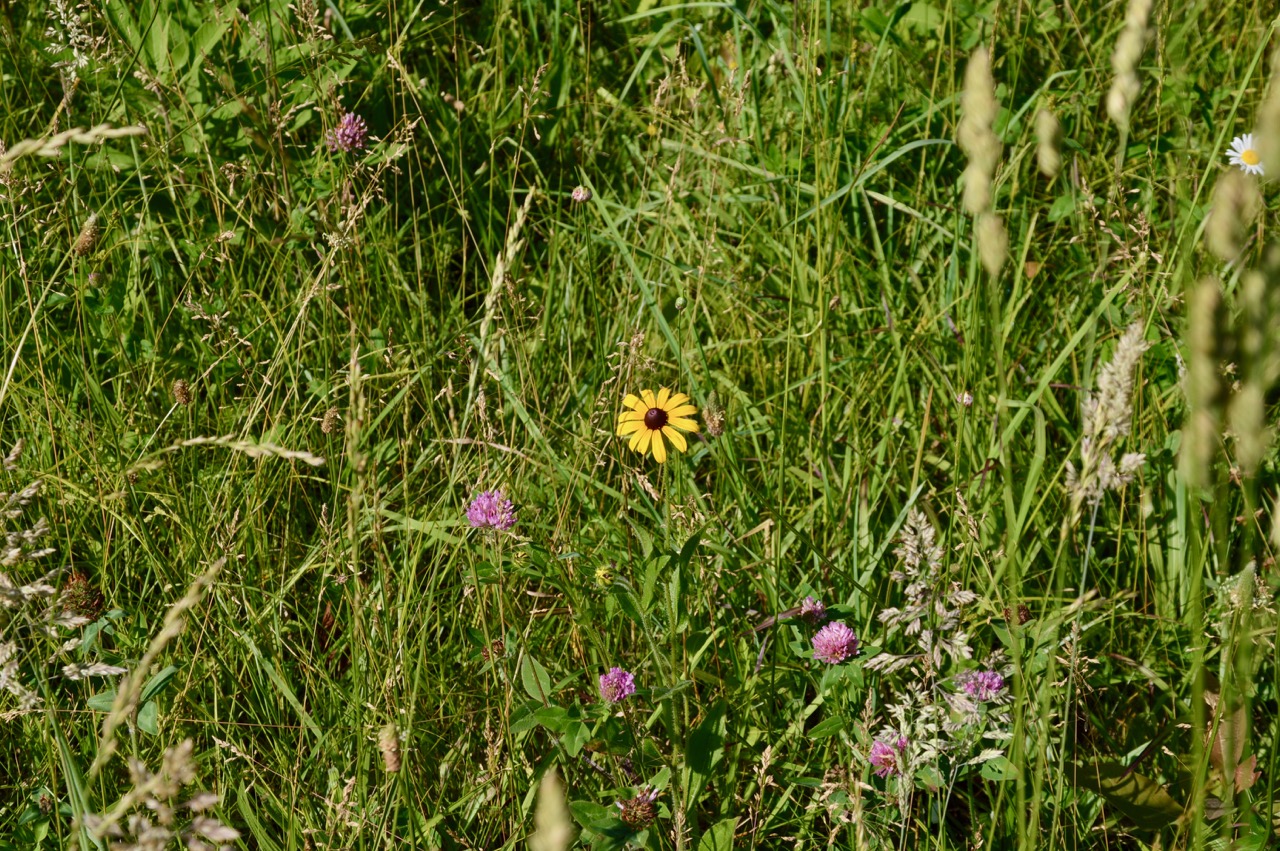 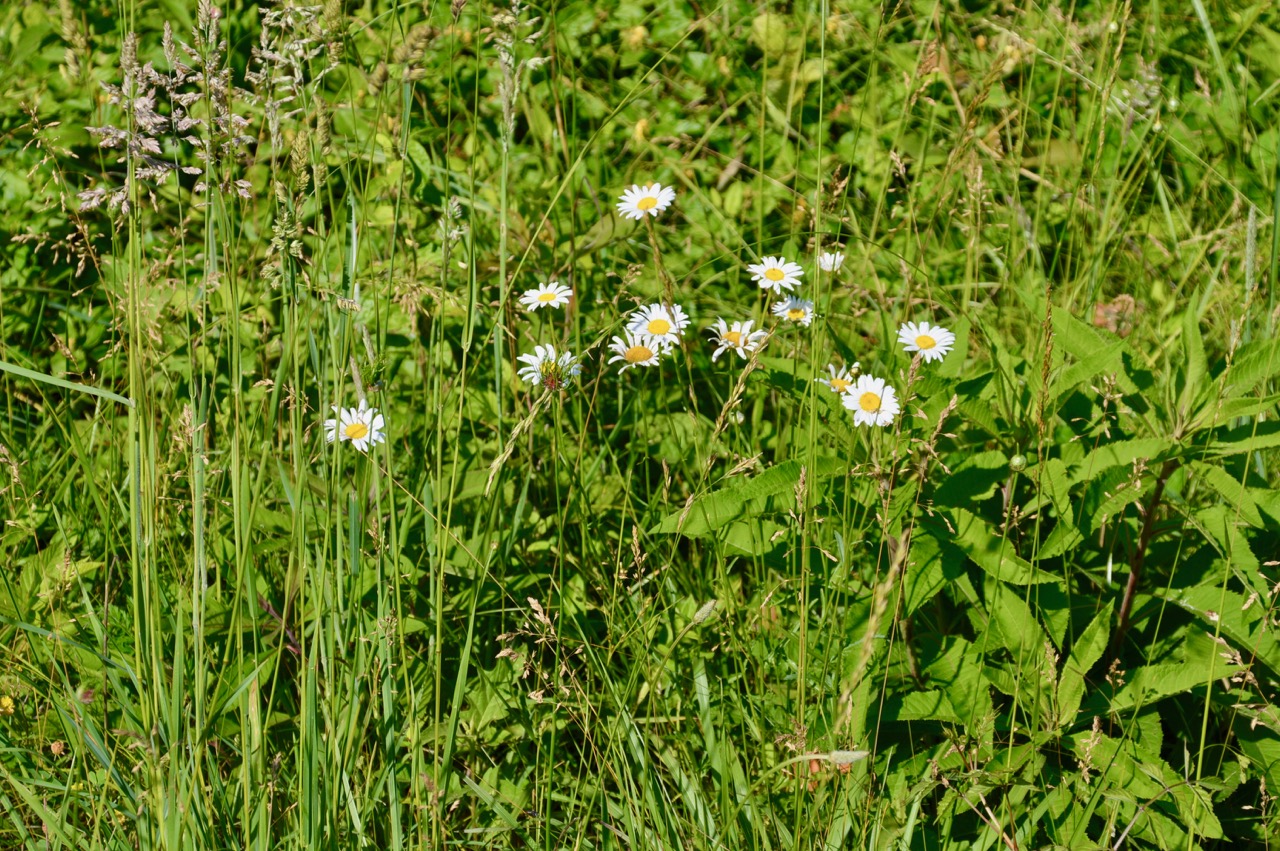 I finished my trim painting early yesterday afternoon. I ended up doing more than I planned on by trying to use up that last 3/8 can of paint. I was at the local hardware store just as they opened up at 8am. I needed to buy some more of that 4-star dog food they sell and I wanted to buy some calk/silicone along with my first purchase ever .. Gorilla glue. 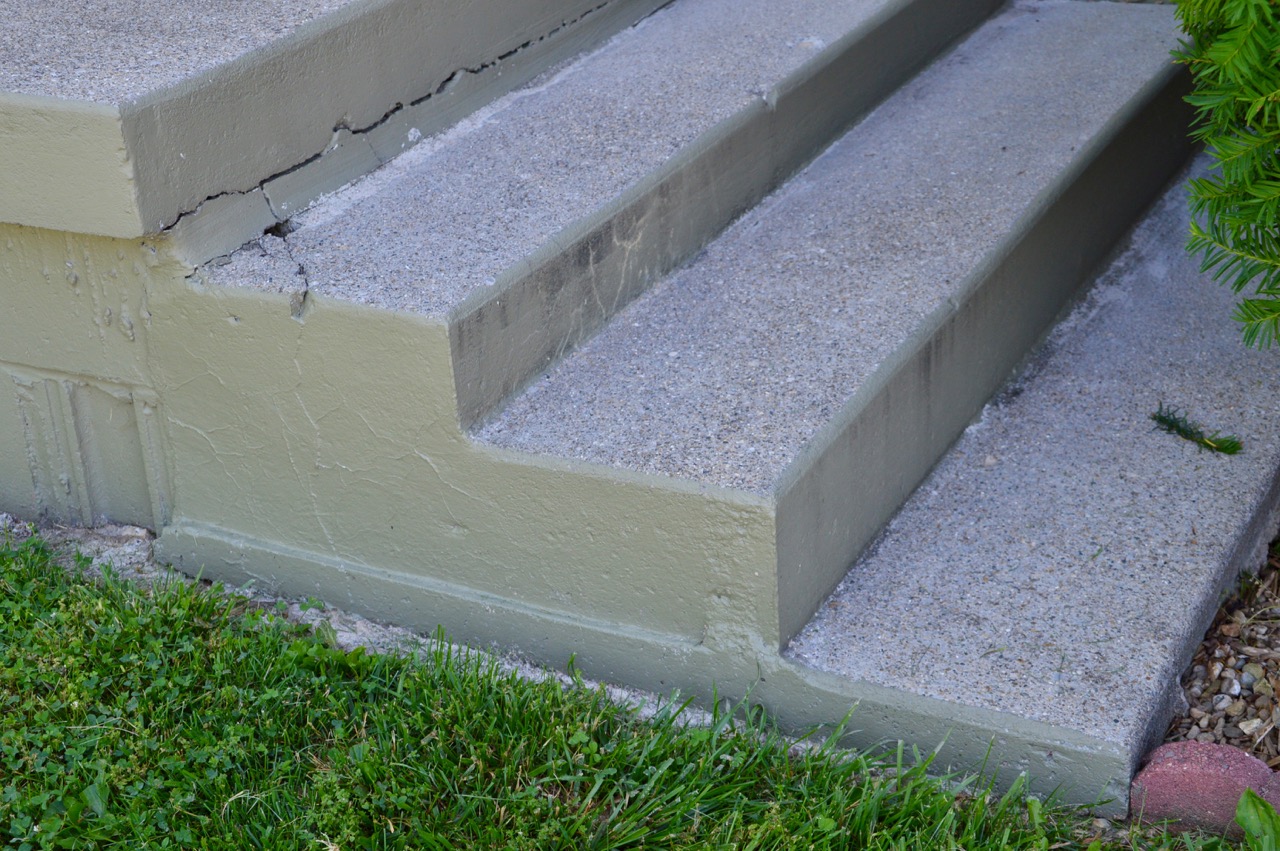 You can see the red foundation paint I pictured the other day is covered up again. It's pretty amazing when I power wash the house next spring that some new spots might blow off where the green paint has bubbled up but that red paint will always be there. It does not move even with a direct hit of the power wash water. 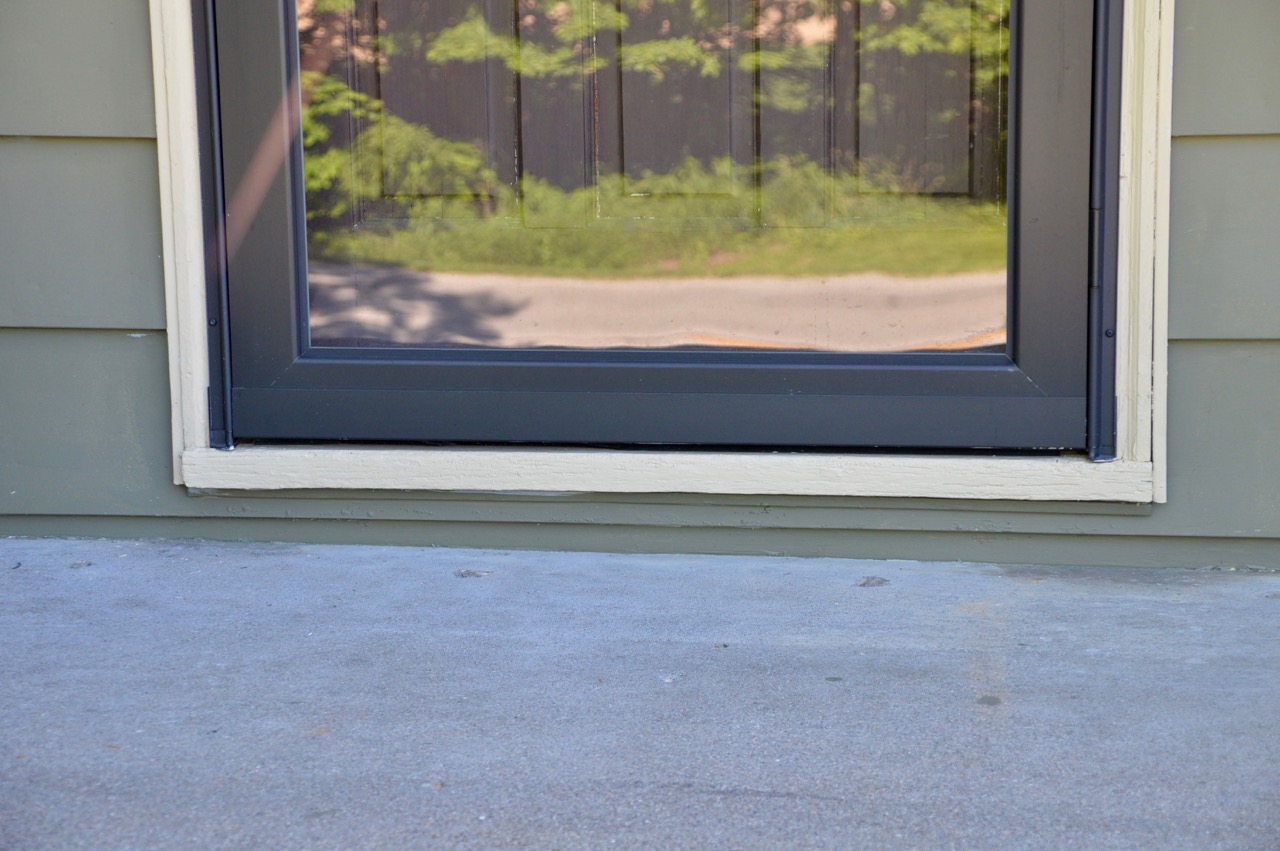 I missed this spot in August 2010 and again yesterday. I will have to lie down a little lower to see and paint over that small spot of gray just left of center and below the door trim. 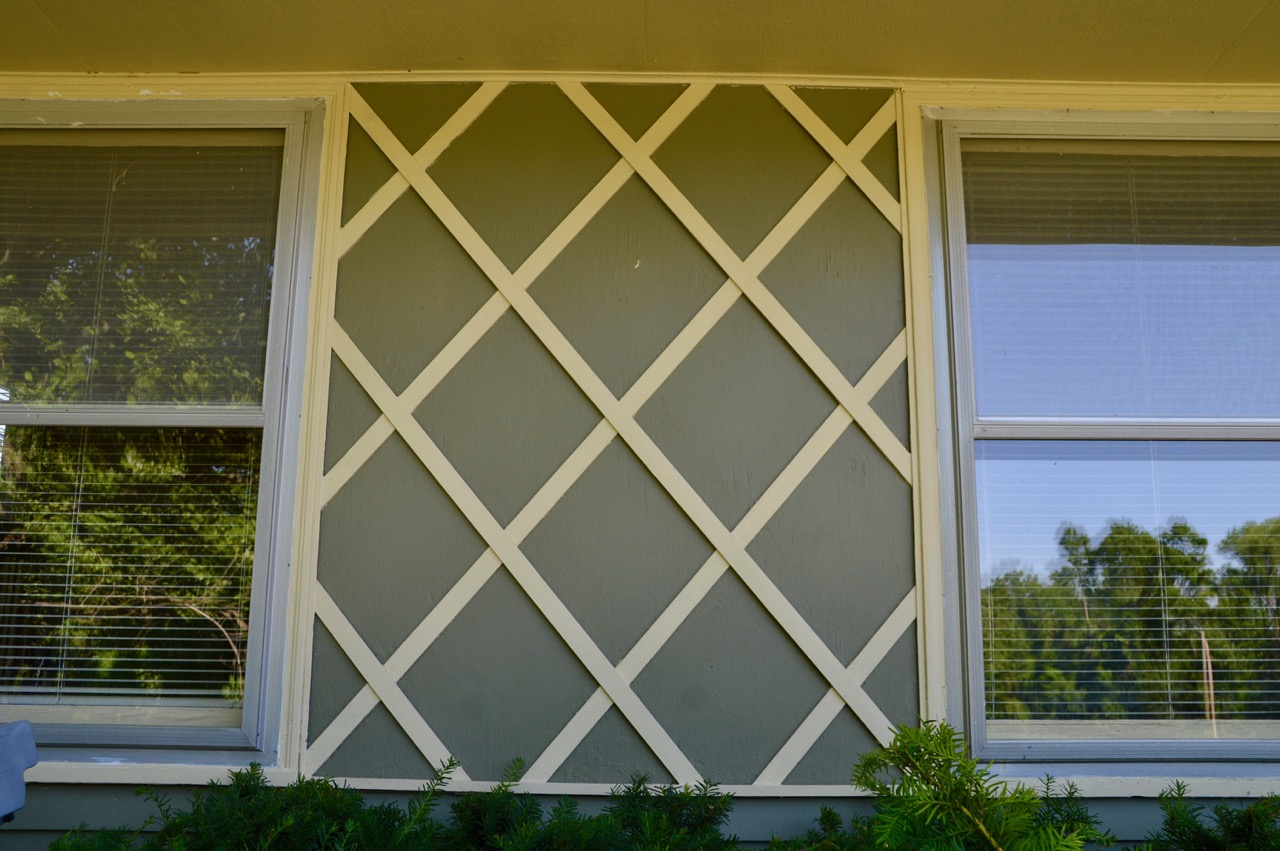 It wasn't until this morning as I was taking pictures of what I had completed as a reference for future years to see if I am having damage in the same spots every couple of years ... when I noticed I missed another spot on the green paint. I am not sure how I did that. With my new plan for green paint, it will not be a problem to paint over that spot at the same time I paint under the door.

When I was about to finish yesterday I had between a 1/4 and 1/2 gallon of green paint left. It had been opened and closed a few times over the past 7 years for touch up work. The paint can lid was to the point it was not sealing all the way after I would tamper it down with a hammer so I decide I'd paint on the back side of the house until the paint was gone.

I still have one never opened gallon of paint on the shelf left from the house painting job in 2010. So it wasn't a big deal about getting rid of what I had left in the can I was using. It shocked me I was able to paint the exterior side of the carport and still having just a little paint left in the can.

From the way the attic looks they built the carport the same time they built the house, yet the exterior back side of the carport has wood siding instead of the aluminum siding the rest of the house has. I cannot say I have ever been a fan of the lattice design here on the front between the living room windows but I've never figured out what else to do with it.

I am up for suggestions for that area. 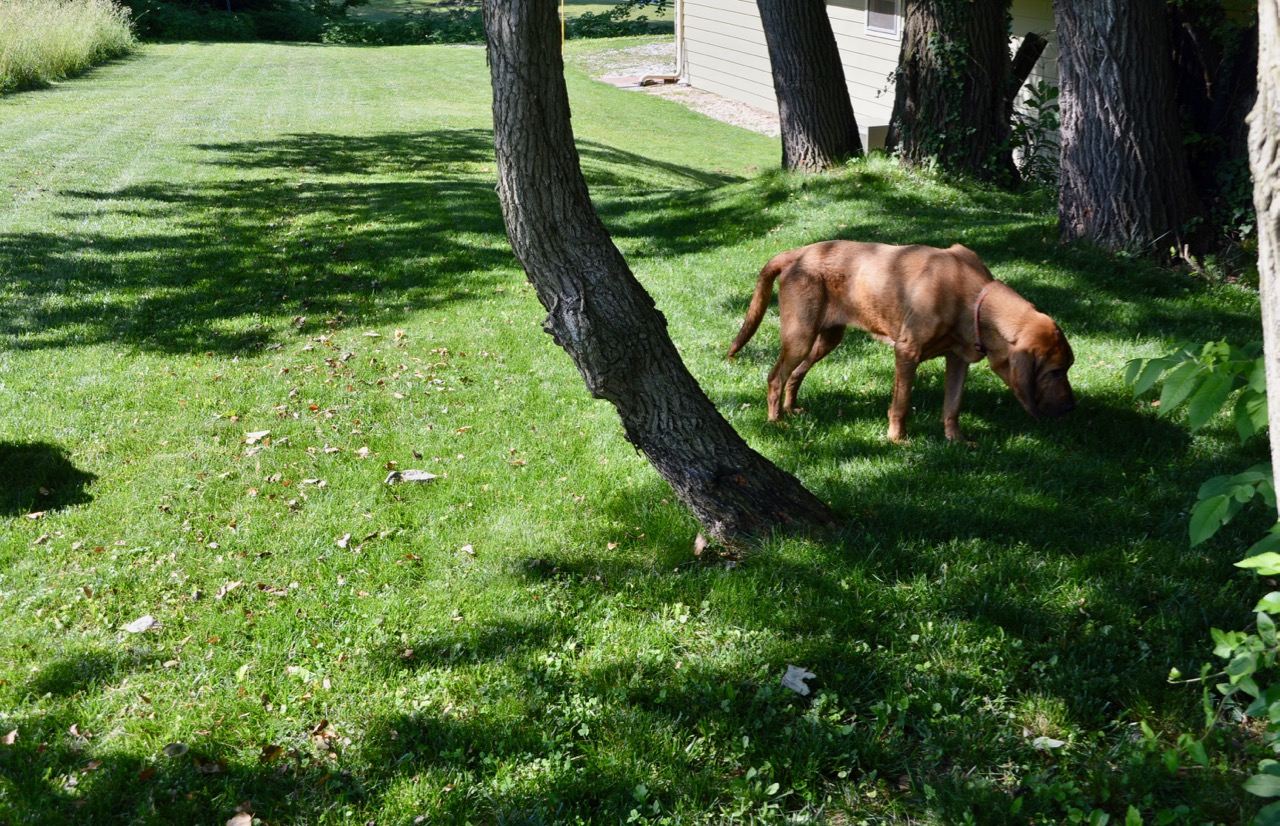 By the time I put the ladder away, cleaned the paint brush and my hands, I couldn't remember what day of the week it was ... Thursday or Friday were my guesses. I had also lost track of time. There was still plenty of daylight to mow the yard and the sun was much higher in the sky than I would have guessed. I found out it was only 5pm and my paint project had been put up and away. 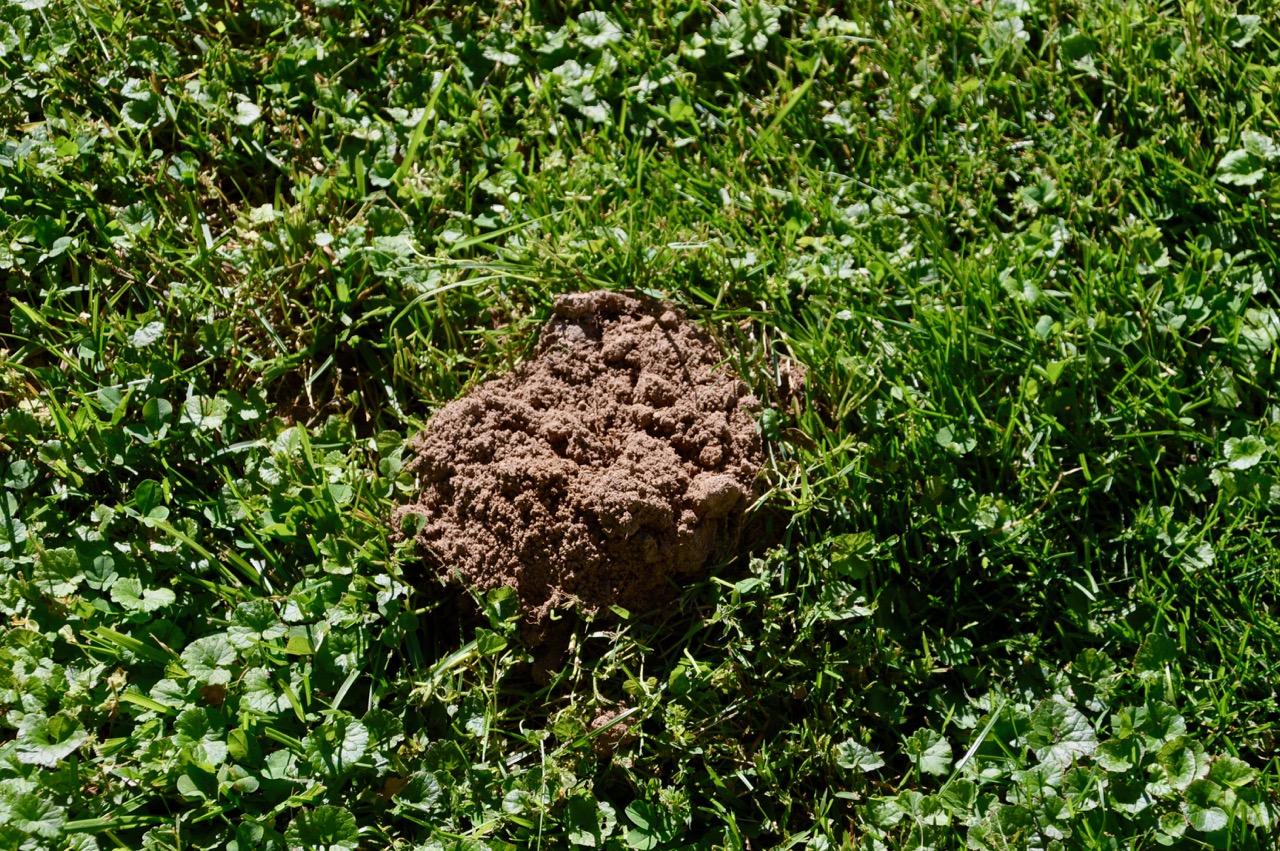 Then ... I saw again ... I had forgot to paint the trim inside the carport, very similar to me forgetting to high pressure wash the fence until I was about to put that equipment away. No big deal, because my new plan with the one gallon of paint that has been sitting on my shelf since 2010 is to paint the carport, the front of the house and whatever I have left in the can.

With my lawn of green grass, clover and weeds I thought it was looking pretty good since March when it looked the worst ever from the mild winter and high mole activity. This morning it was sad to see that the moles have returned. I've tried everything over the 19 summers that I have been here, to kill the grub worms thus keep the moles out of the yard. Probably impossible to do living next to a field.

Due to the hounds paws, I am not a fan of spraying chemicals of any kind on the yard or driveway so the weeds grow wild and the moles tear up my yard. What's the solution?

I was so tired and sore last night that I told myself I'd take the day off today. I have so far and it's already 11:30am. I usually get a burst of motivation right after the hounds have their lunch kibble and I must admit I have a "slight urge" to paint the trim of the carport today. With no rain in the forecast until Sunday night I would also have Saturday to do the same thing and still recoup for a day.

Weather so far this spring and summer has been unbelievable good in 'the tropics' of Southern Indiana.
at June 02, 2017