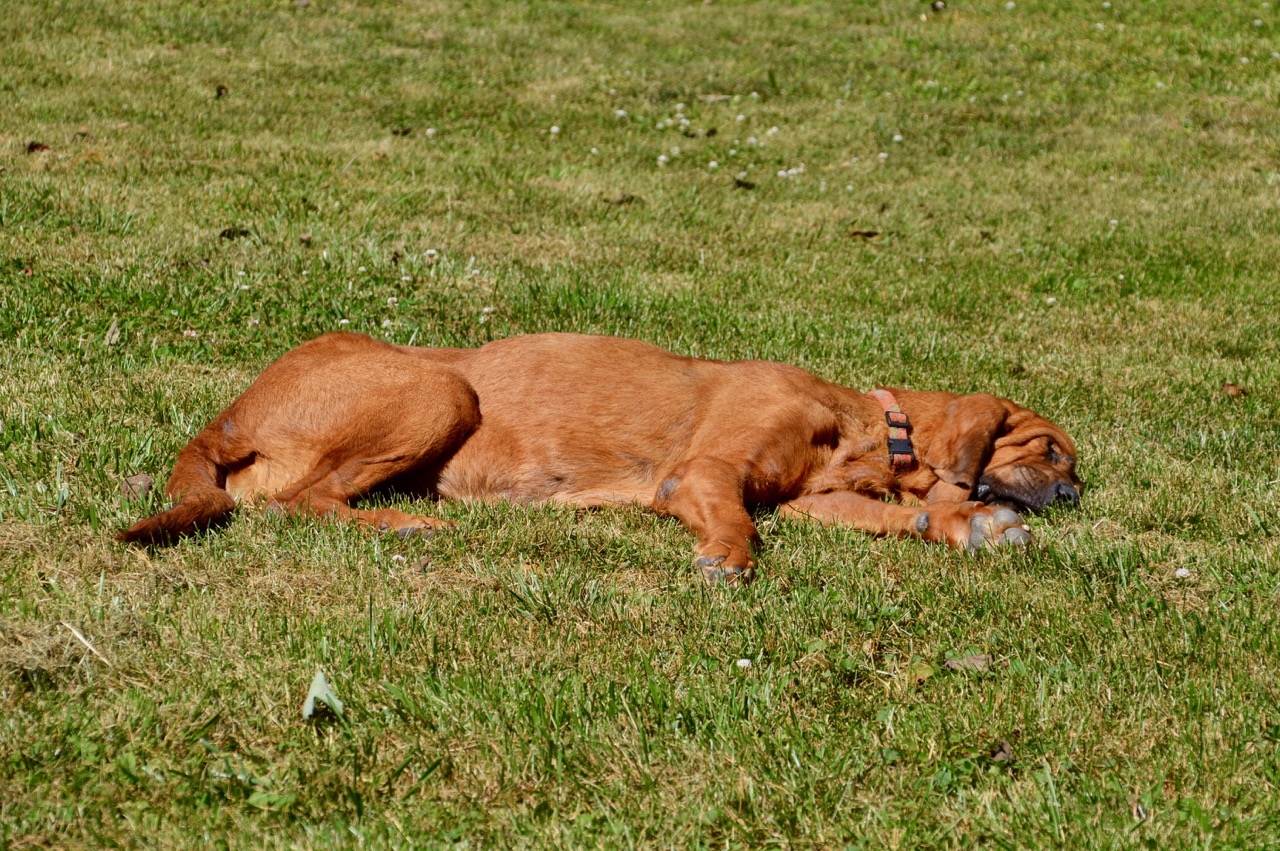 Okay ... I know this picture does not match the title of this post but she gets her rest when she can ... LOL. That was late yesterday afternoon. We had two walks in the books, one with just the 25' retractable leash, one with the camera. There was a cool breeze and seemed like a perfect time to sit outside and let the hounds do what they wanted. 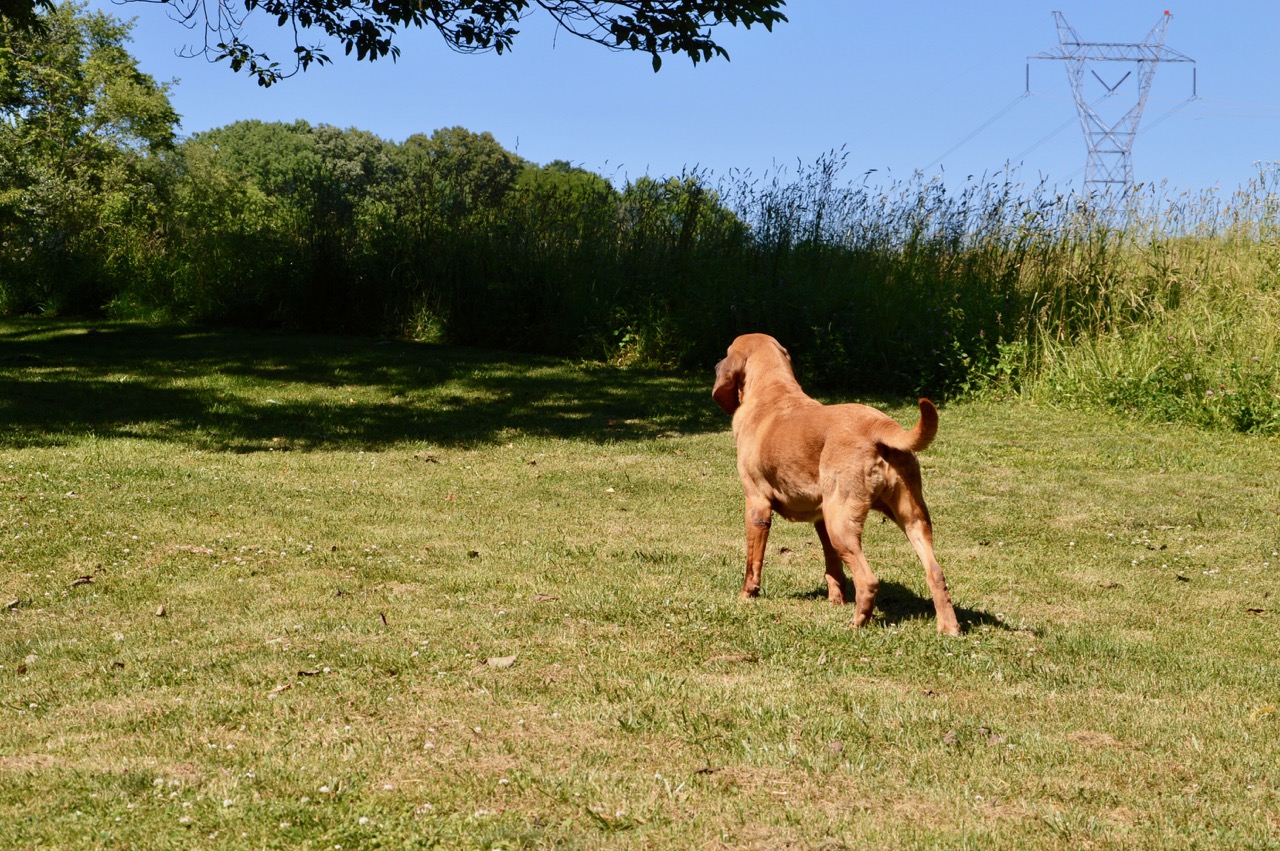 It did not take long for Sadie to inspect her yard and then head out into the field. 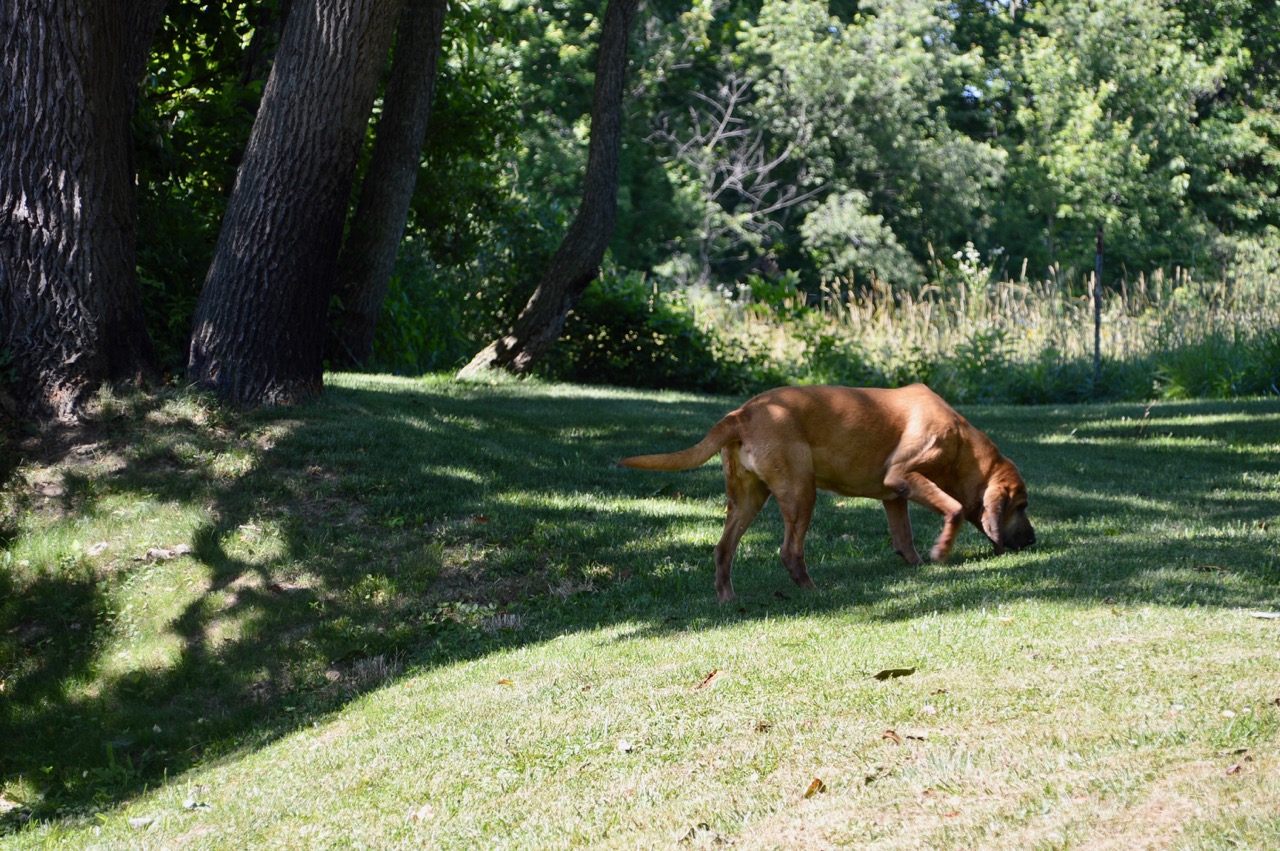 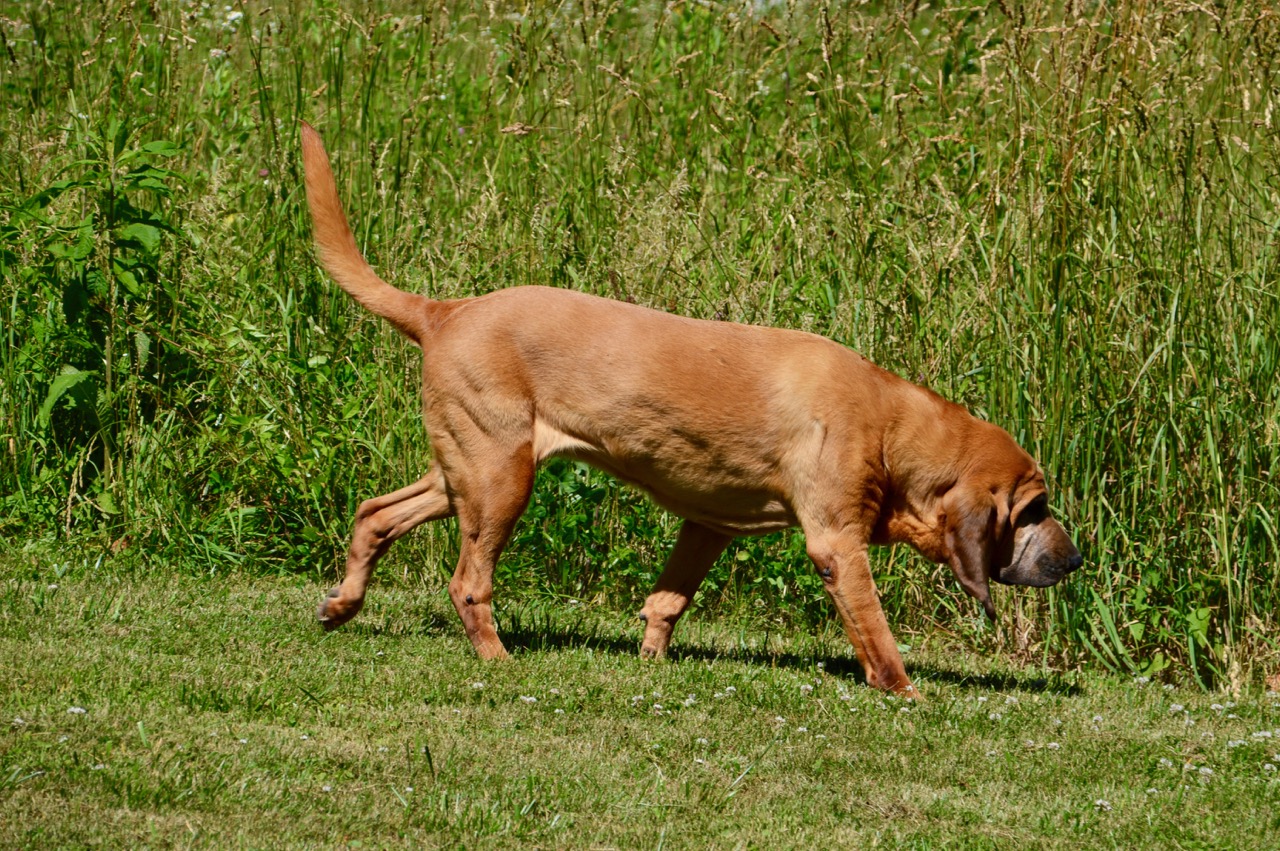 Stella had other plans though. It was a little after 4pm, she had been sleeping most of the day away inside but that doesn't mean she would not take advantage of the hot sunshine. I'll let the photos tell the story but this is her normal process for taking an outdoor siesta. She puts a lot of thought into it. 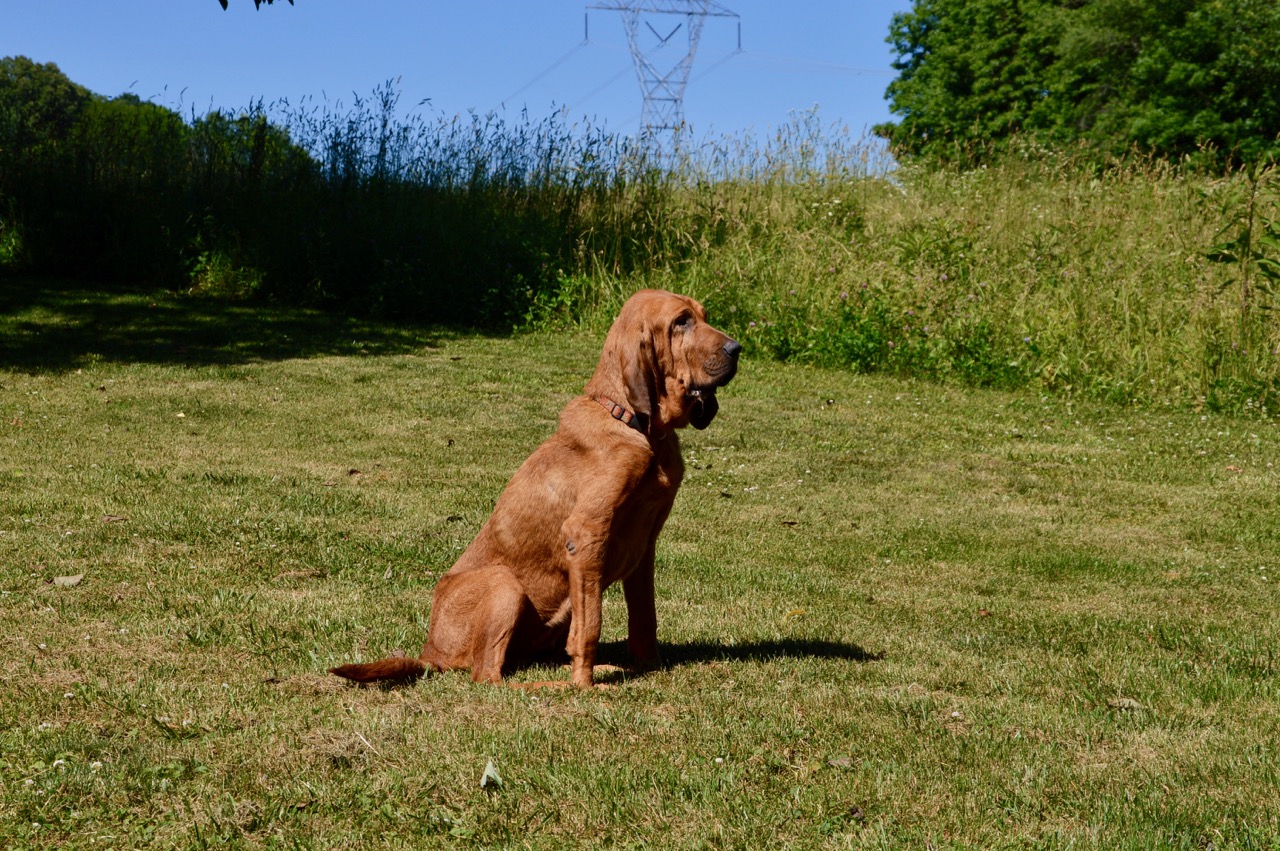 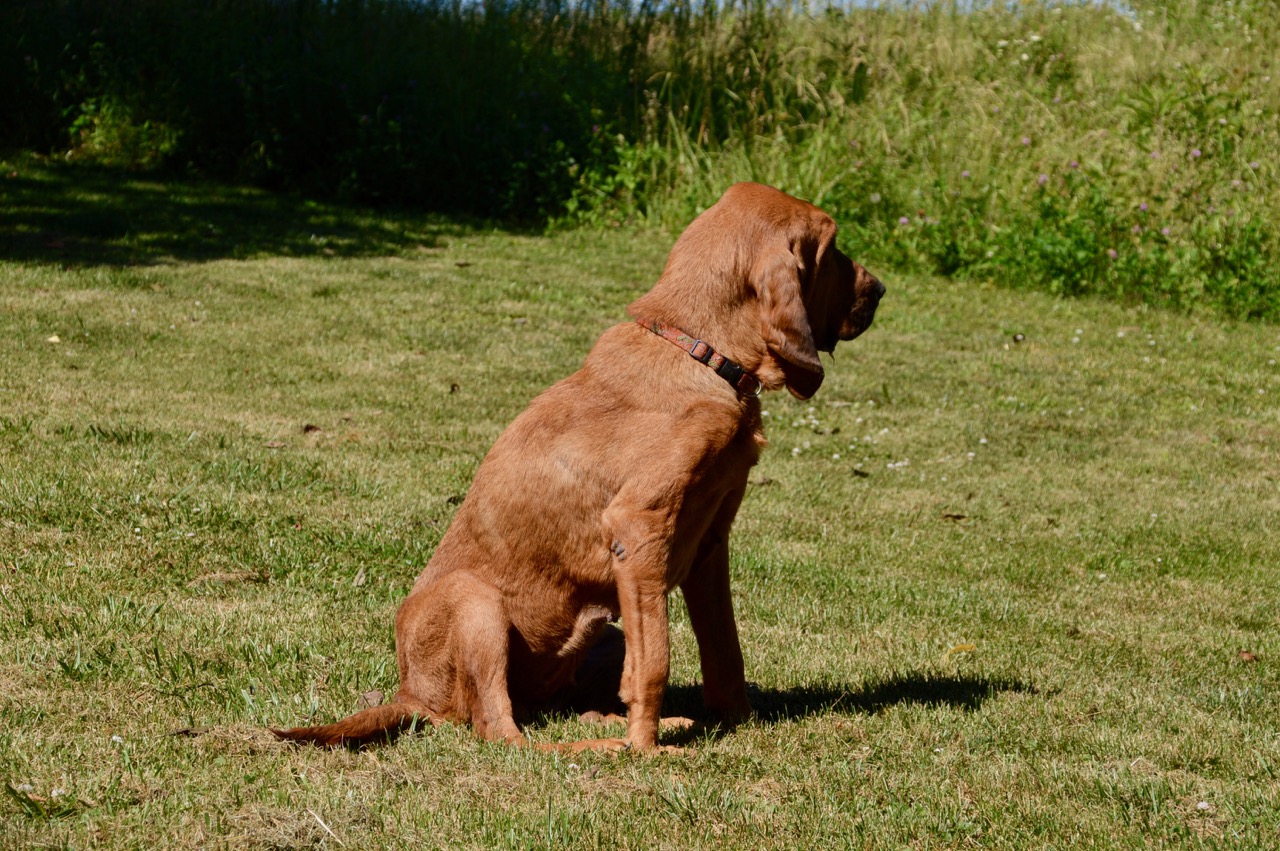 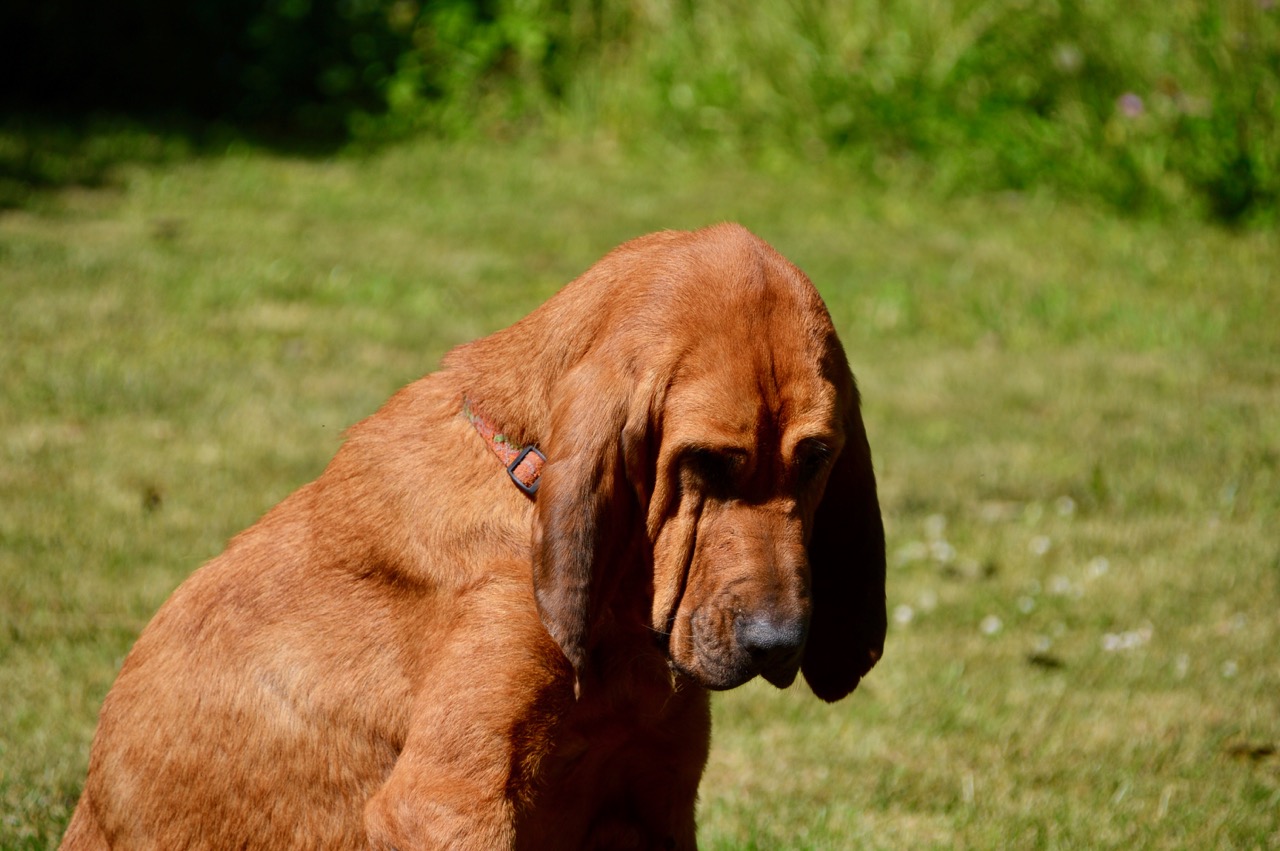 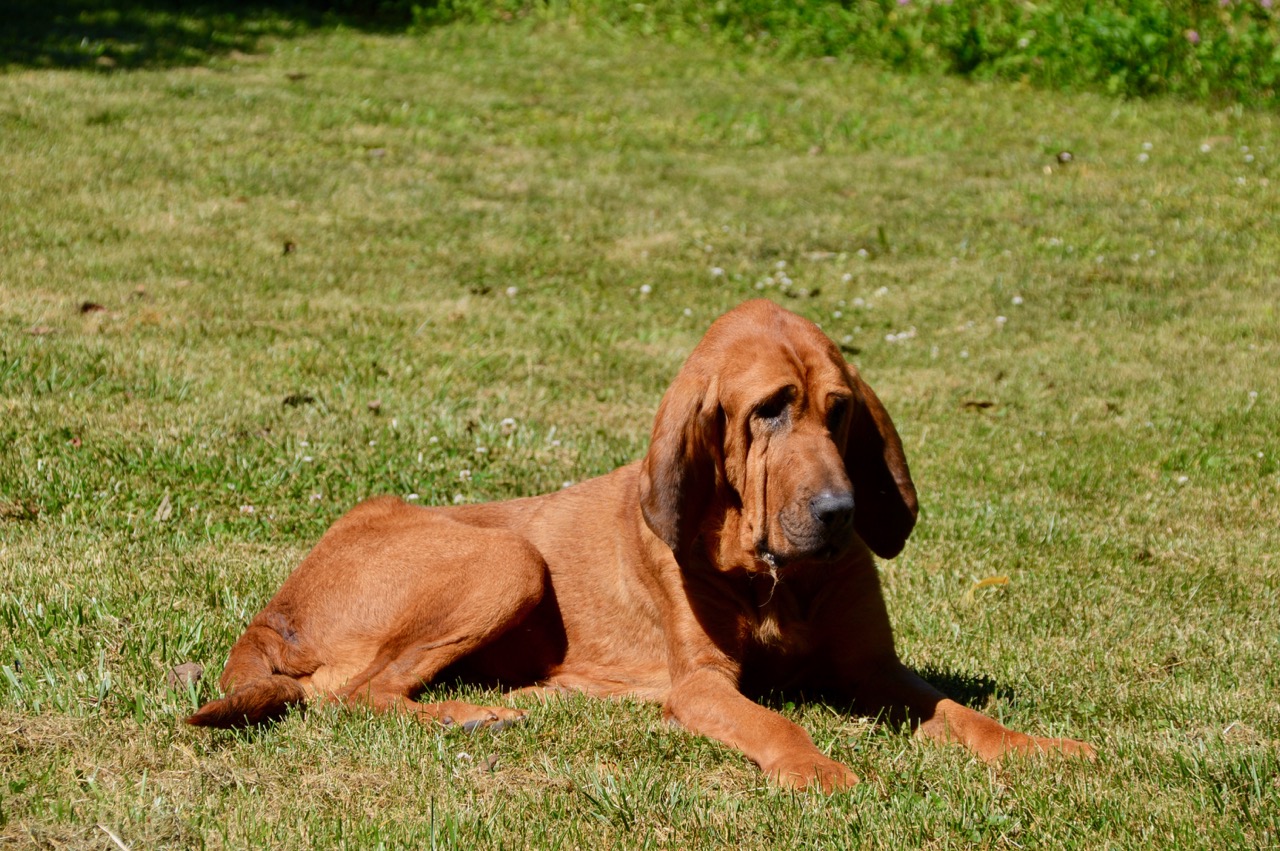 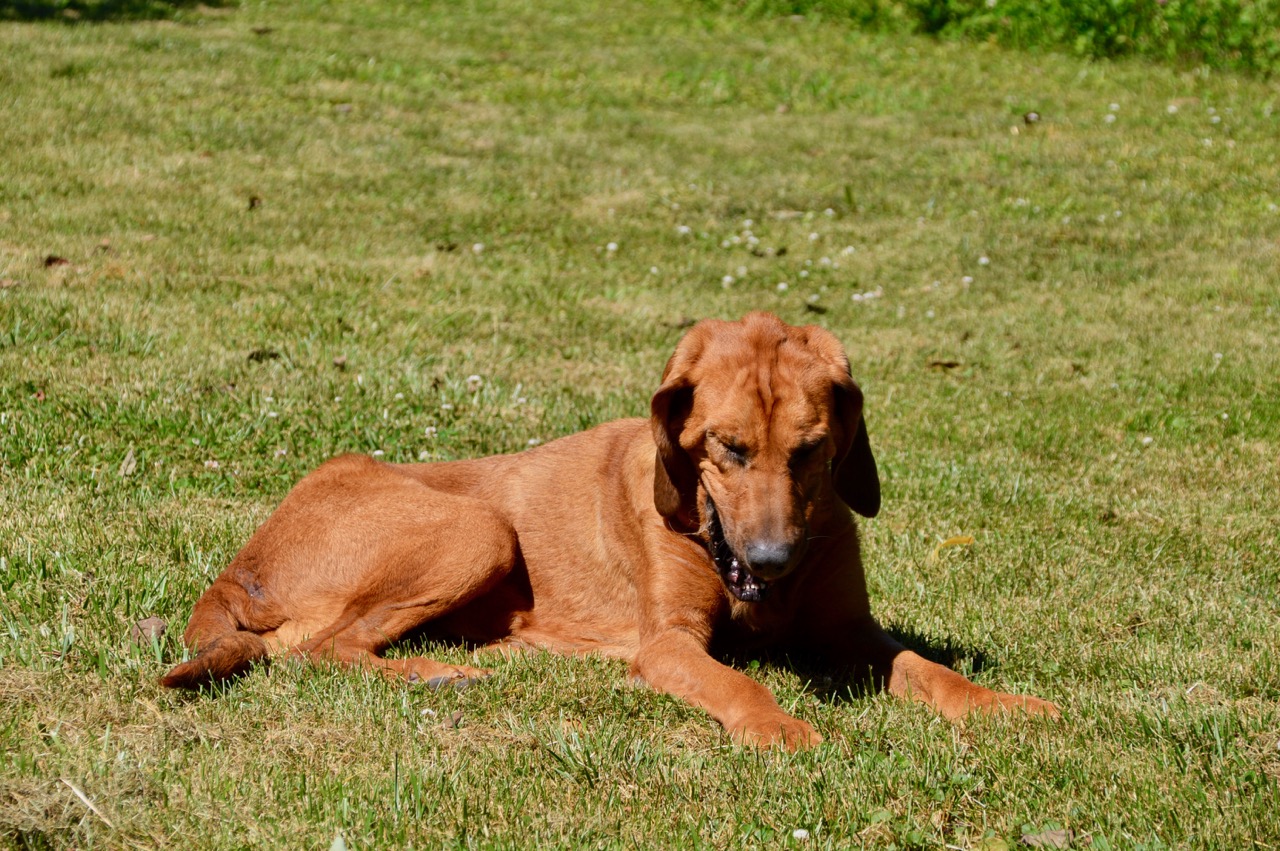 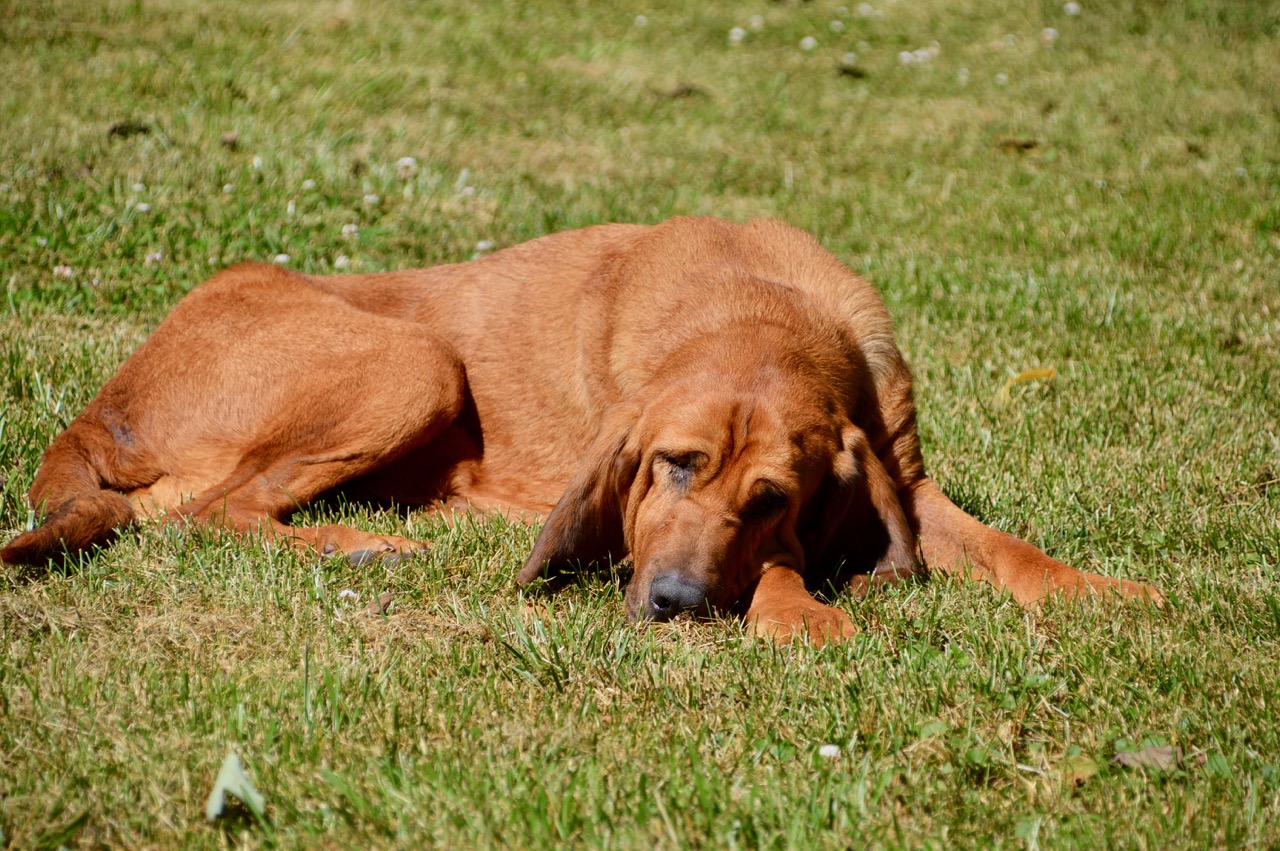 Sadie is totally opposite. She rarely sits or lays down in the yard ... her nose is woking 24/7, inside or out and seems to be more active as she gets older. She will be 9 years old this month. 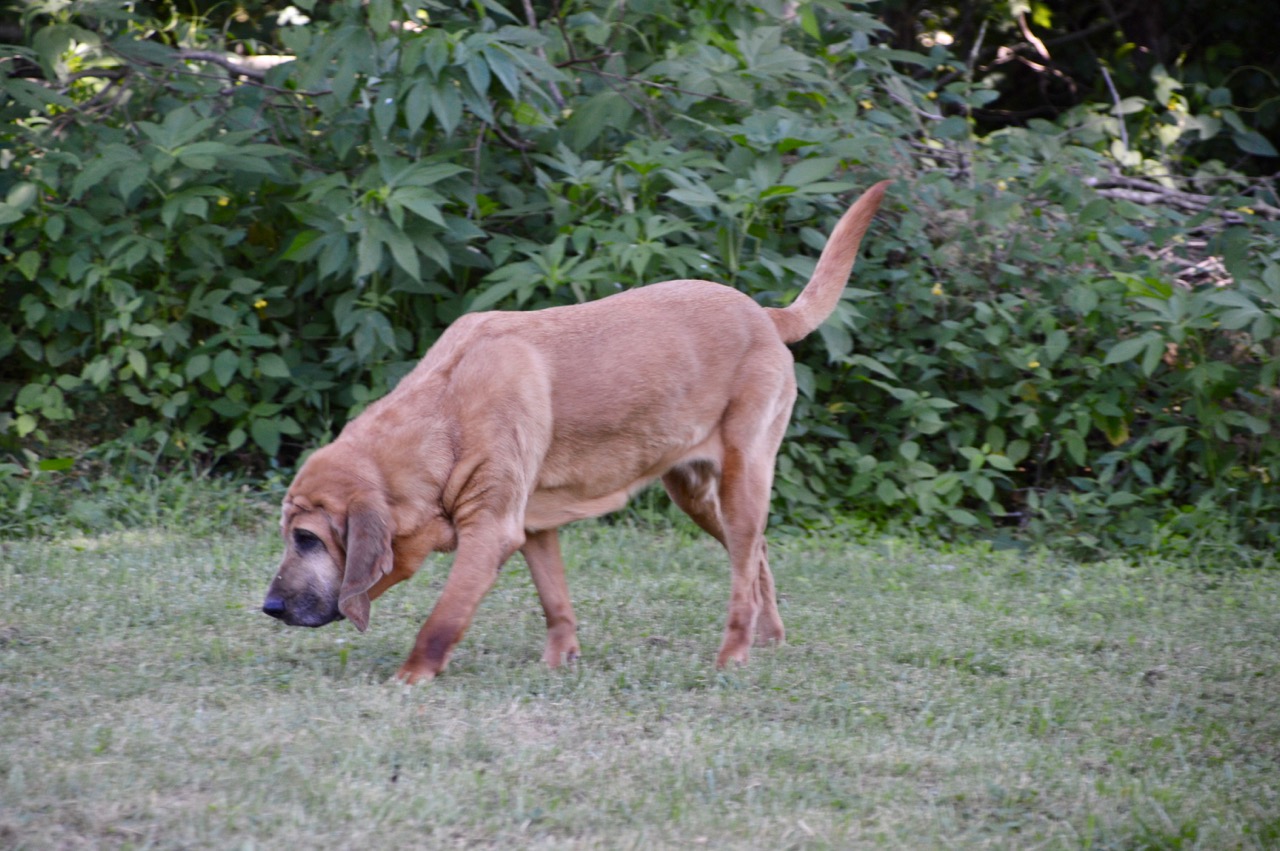 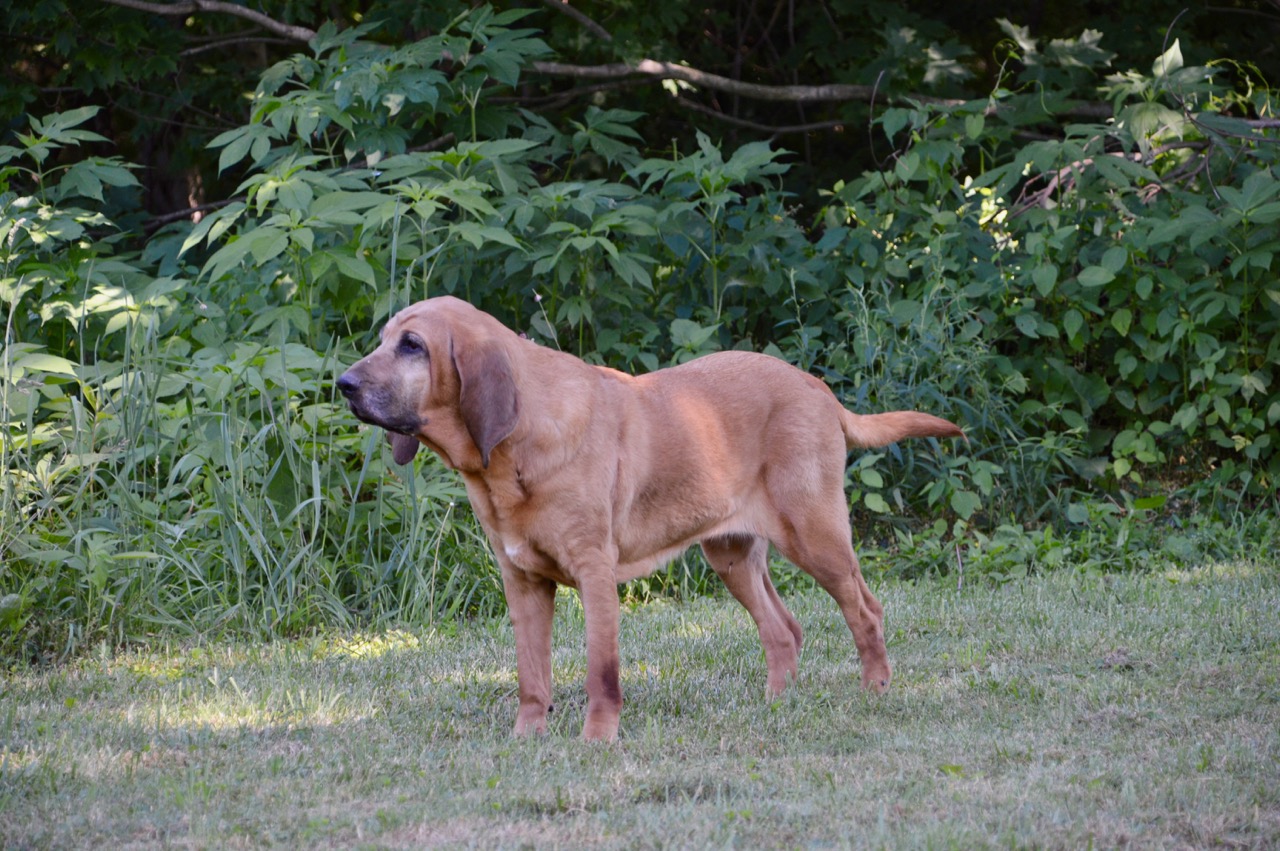 She slowly migrated across the backyard while Stella remained sleeping, and slipped into the tall grass ... this always reminds me of the movie Field of Dreams, where the baseball players are moving into the cornfield only to disappear after a few steps. 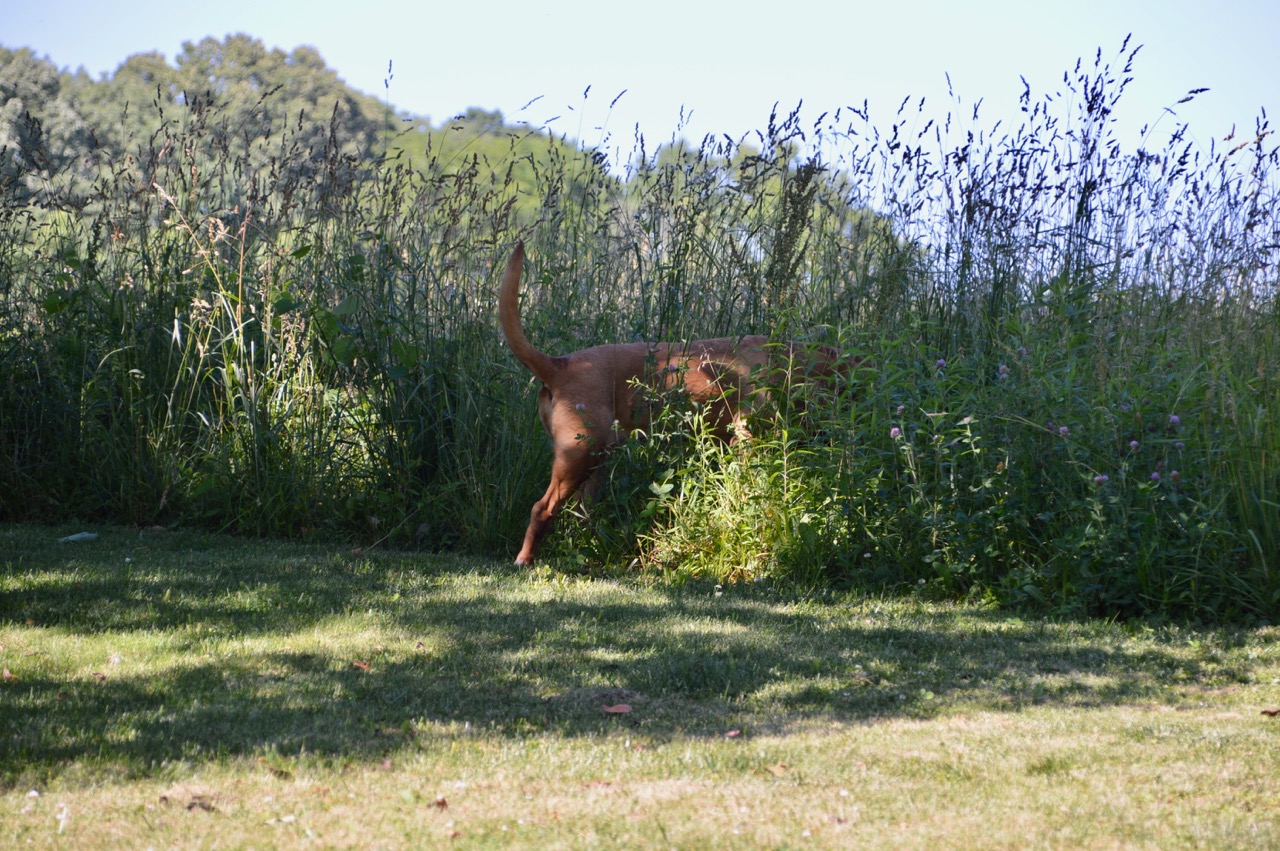 With the information from Tom's comment on yesterday's post I had to make a fast 45 minute drive to Best Buy to pick up something I had been thinking about for the past two to three weeks. I'll talk about that later after I give it some time to collect data and shows me how accurate it is.

With the temps at 63° when we went out to take our first of mostly like three walks today, I tried to show just how wet the field was with this next photo but it did not turn out as well as I had planned. It didn't matter, extremely wet and the reason I wore my North Face snow boots instead of the waterproof hiking boots. 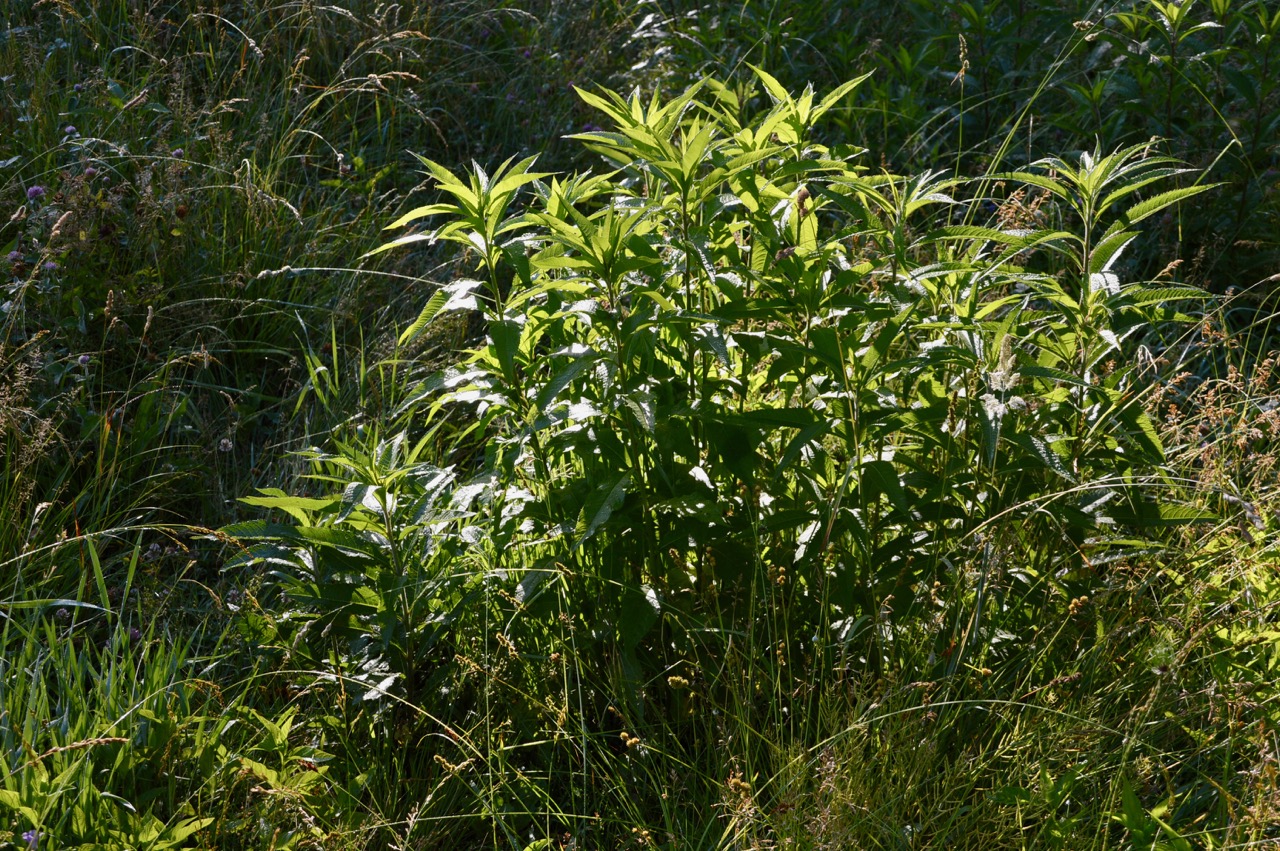 Again I was going to let Stella go where and when she wanted. Not one time was I able to catch her when she was doing a faster trot but on three different occasions she almost broke into a run like she use to. At the first start she trotted from the house into the field then right after this picture she trotted over to catch Sadie. 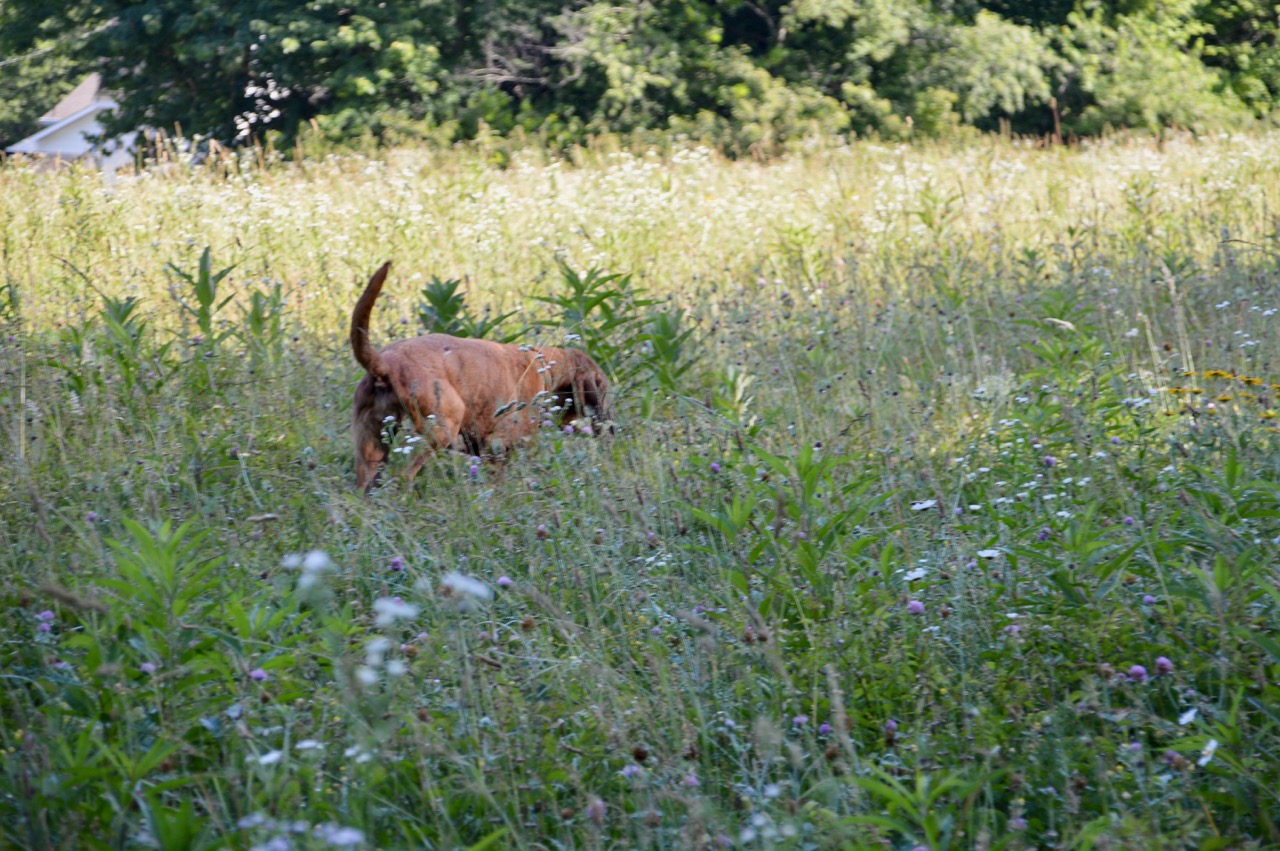 You never know what the plan is when these two hounds put their heads and brains together. 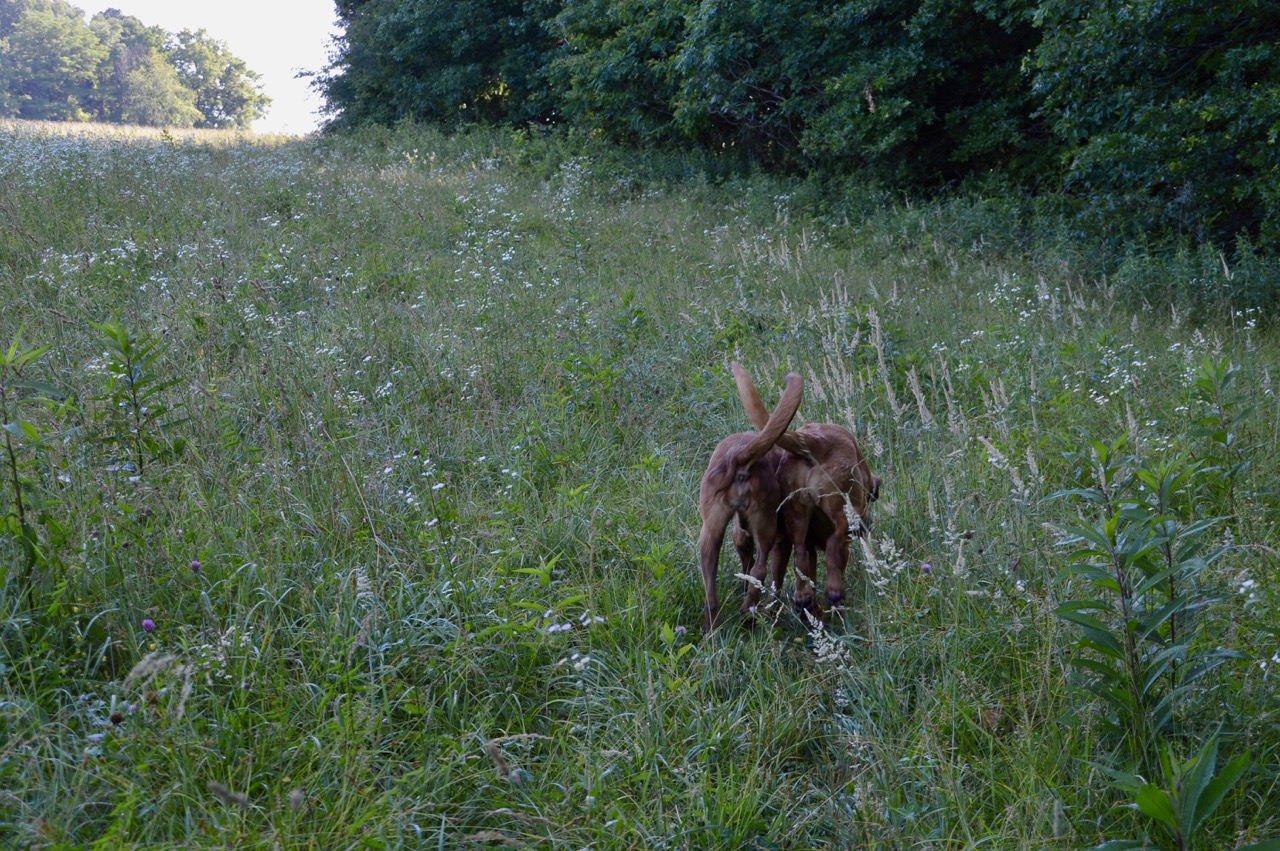 Each time I brought the camera up in focus to catch her trotting, she would stop. 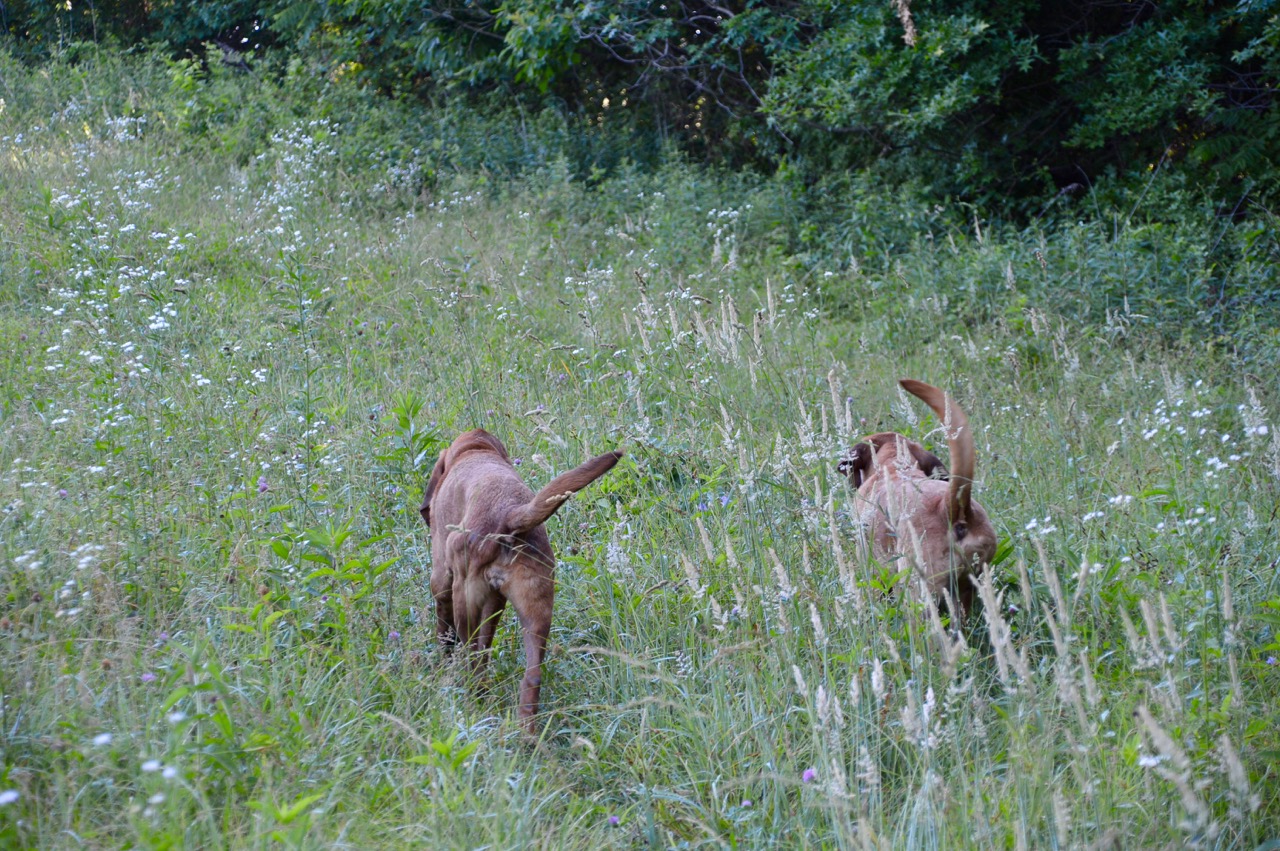 She hung back as Sadie and I moved out in a little faster pace. I couldn't keep up with Sadie and by the way she was acting and the sounds I heard in the wooded area I was pretty sure that rabbits were scampering to get away. Sadie is not a rabbit chaser though ... birds are a different story. 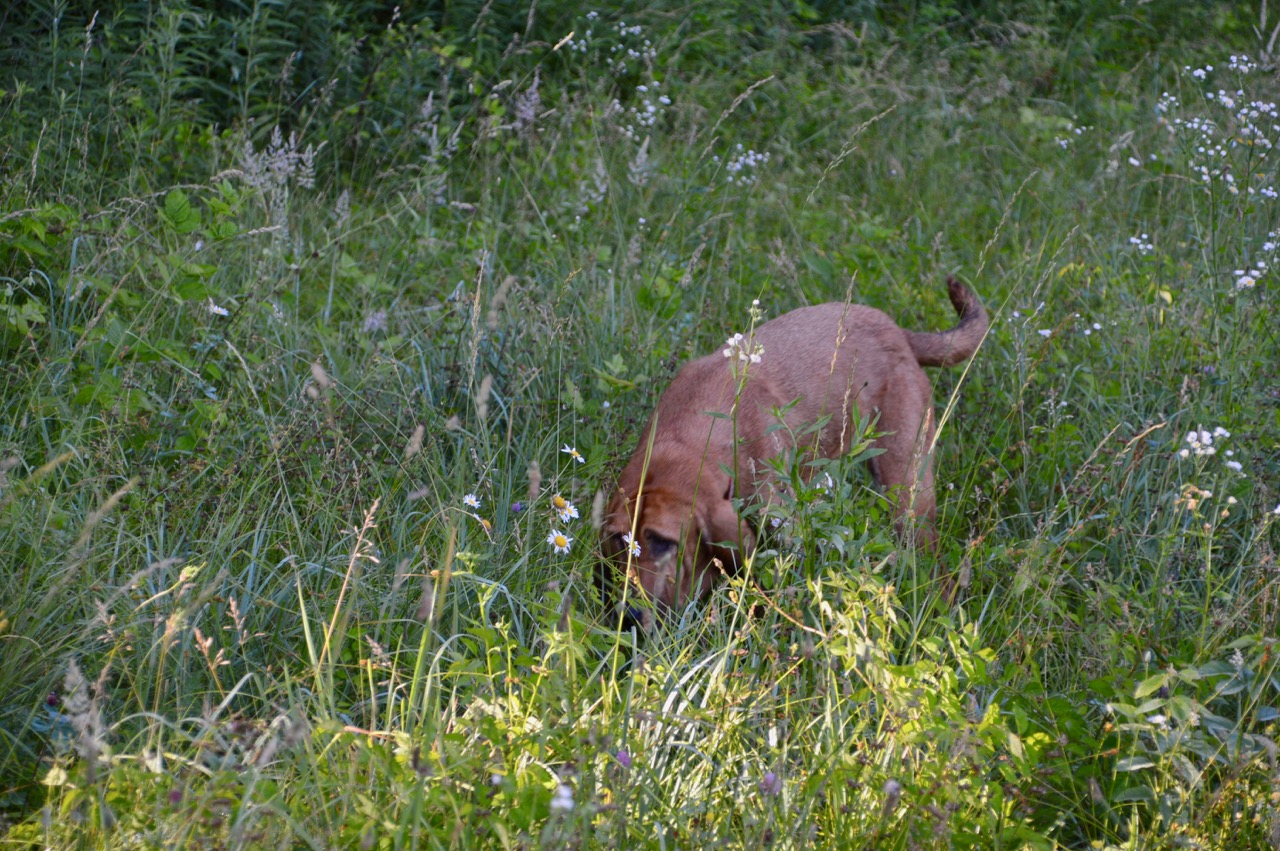 With this being our last day of cool temps, I could feel the heat of the sunshine as we turned the corner and headed east. 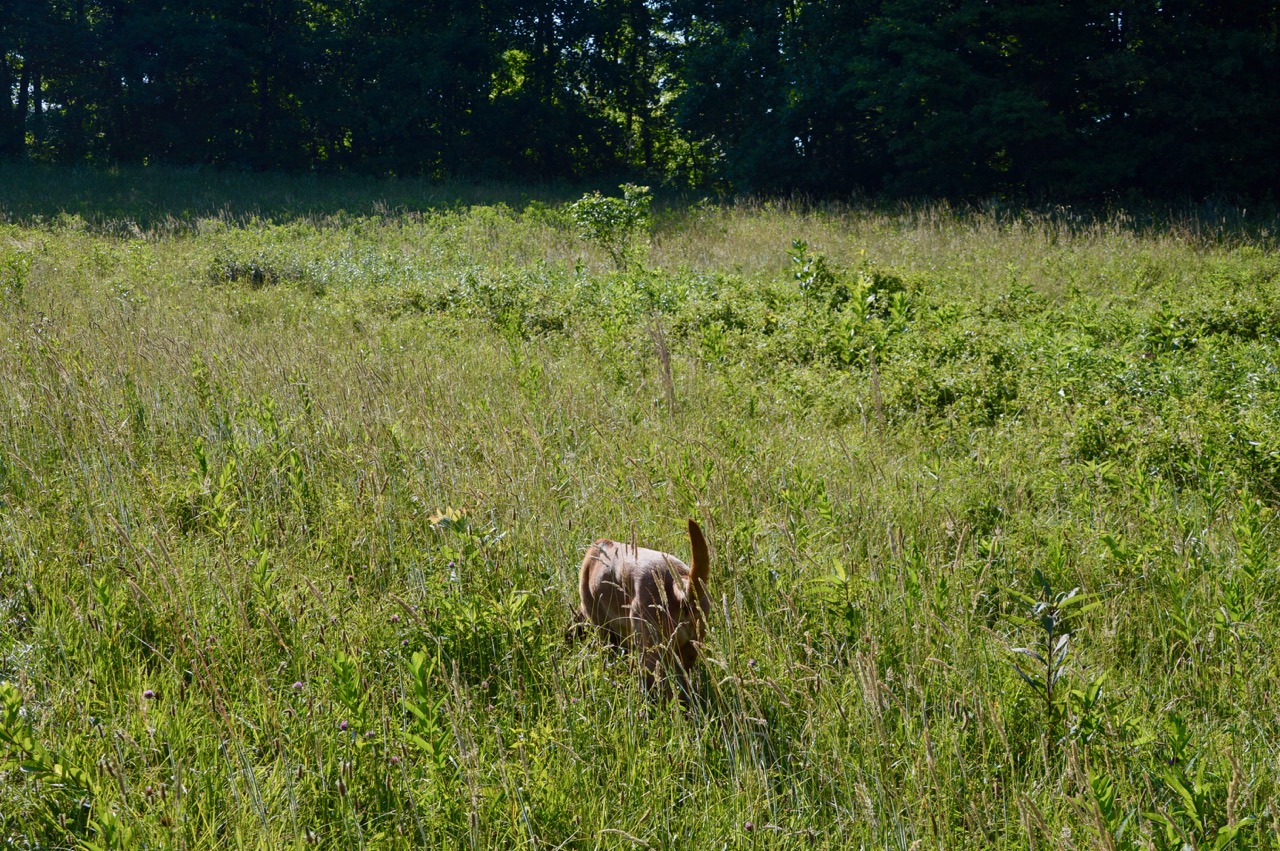 Each time I looked behind us there was no sign of Stella as I expected but that didn't stop Sadie from looking back in her direction wondering where she was at. At the time that Sadie looked, Stella was nowhere in view. I have to keep reminding myself when she looks this way it's not her eyes she is using but her nose and ears in looking for Stella. 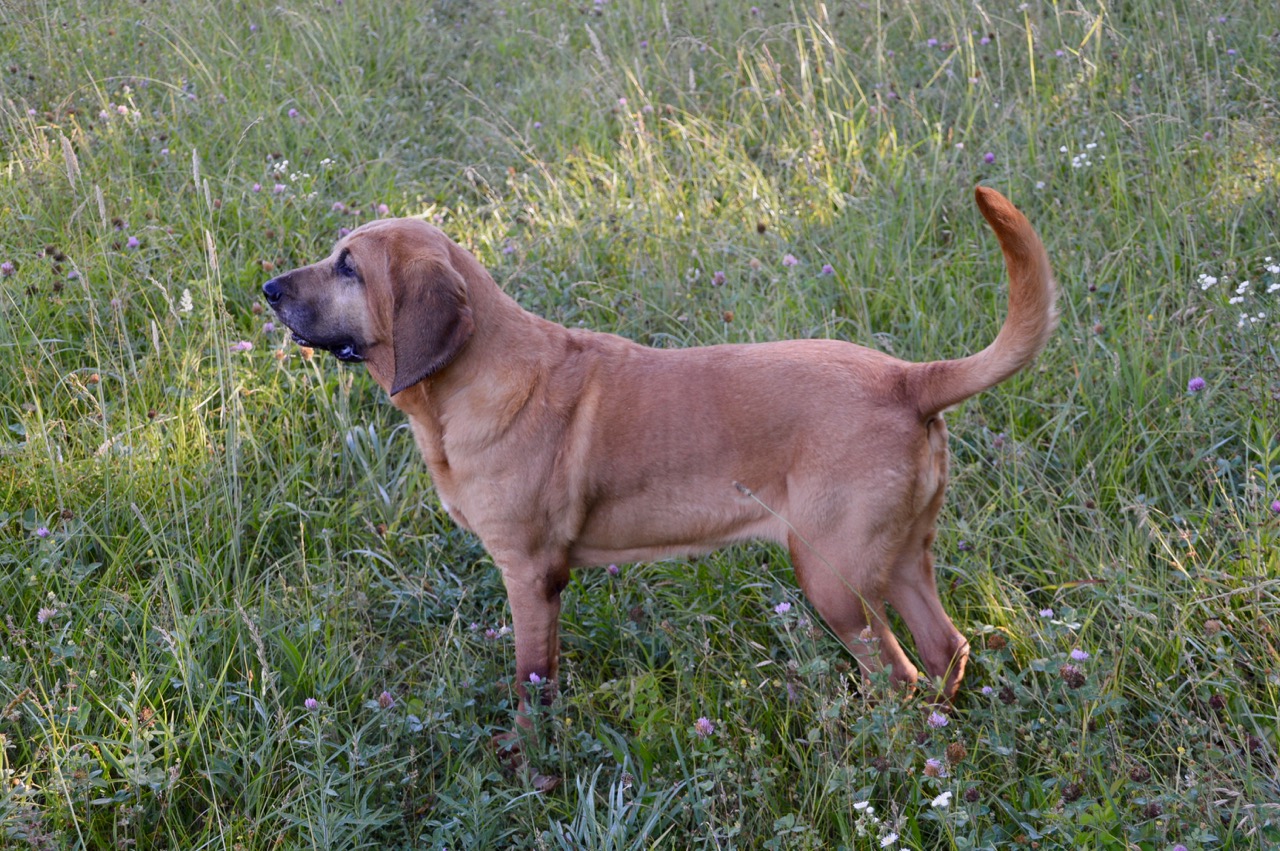 If you look really hard like I did, you will see Stella almost dead center in this photo. I was happy to see once again that she was not over at the neighbors checking out their newly trimmed maple trees. 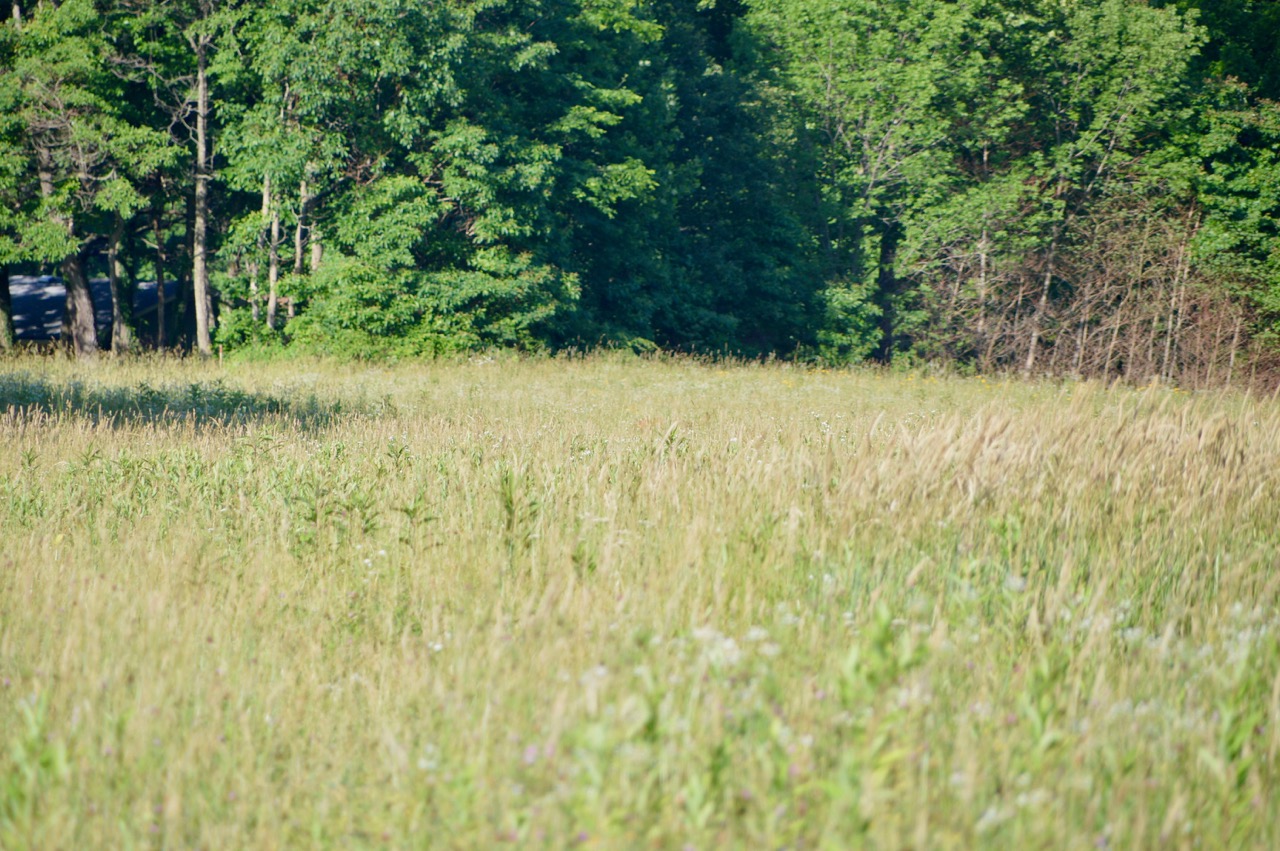 Sadie was sure that Stella was in our area of the field but that was not even close. She zigged and then zagged looking for her, with no luck. 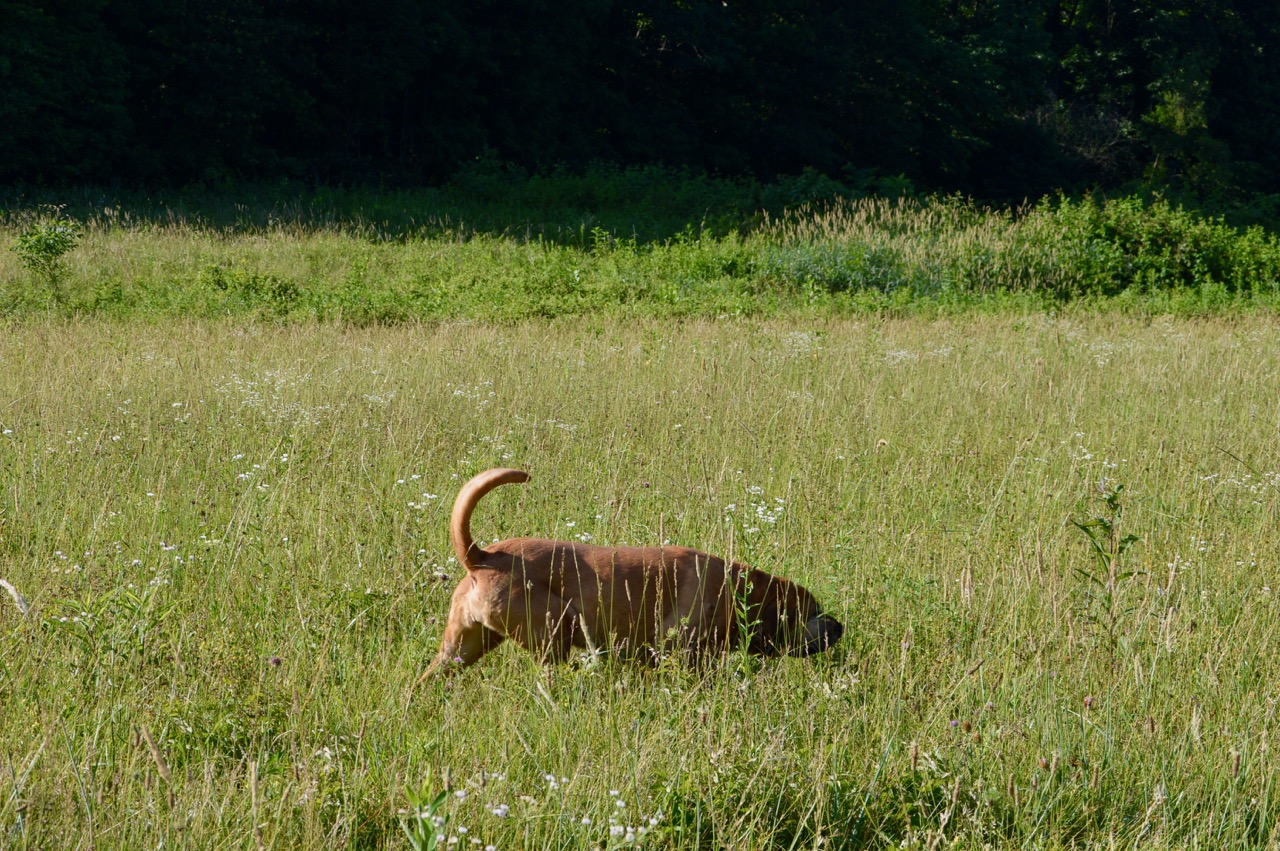 Once Sadie took off running ahead of me I knew she had found Stella and it was just a matter of time before she would run full speed, tap noses with Stella to let her know it was time to head home. 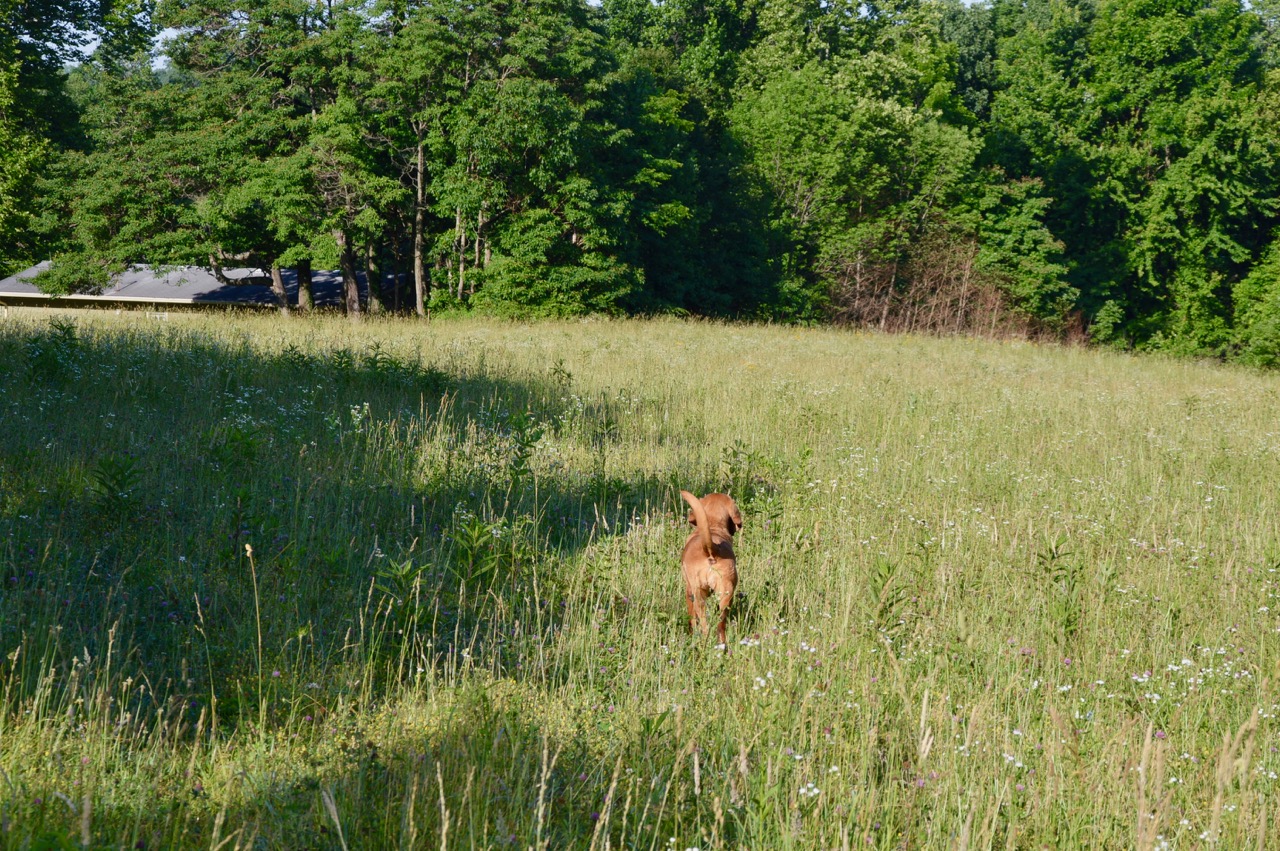 Stella has moved back to left of center of the field and since we were walking in the sunlight to the north corner of the yard, a little different return path I have been taking lately to stay dry, she was fairly close to us once we walked a little future. She came right over to me when I said "lets go home". 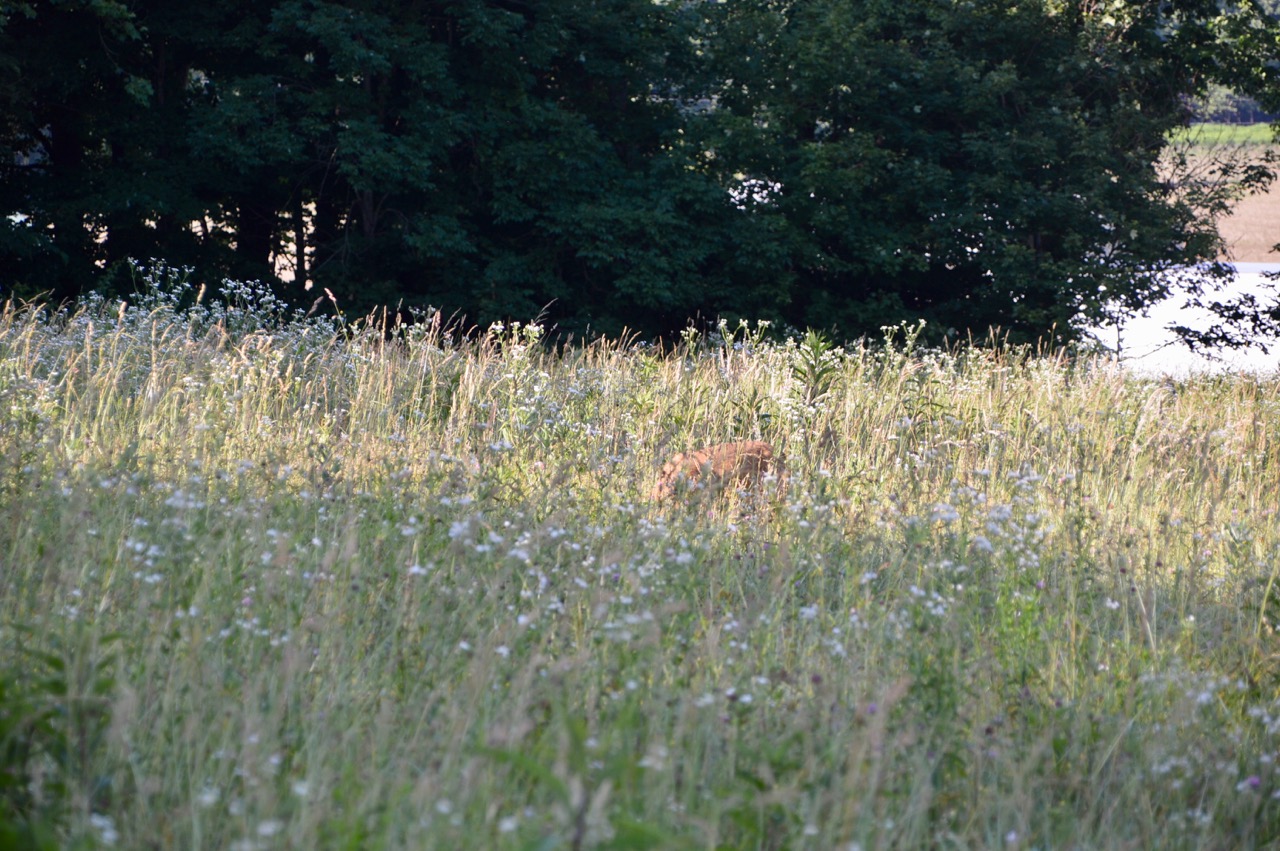 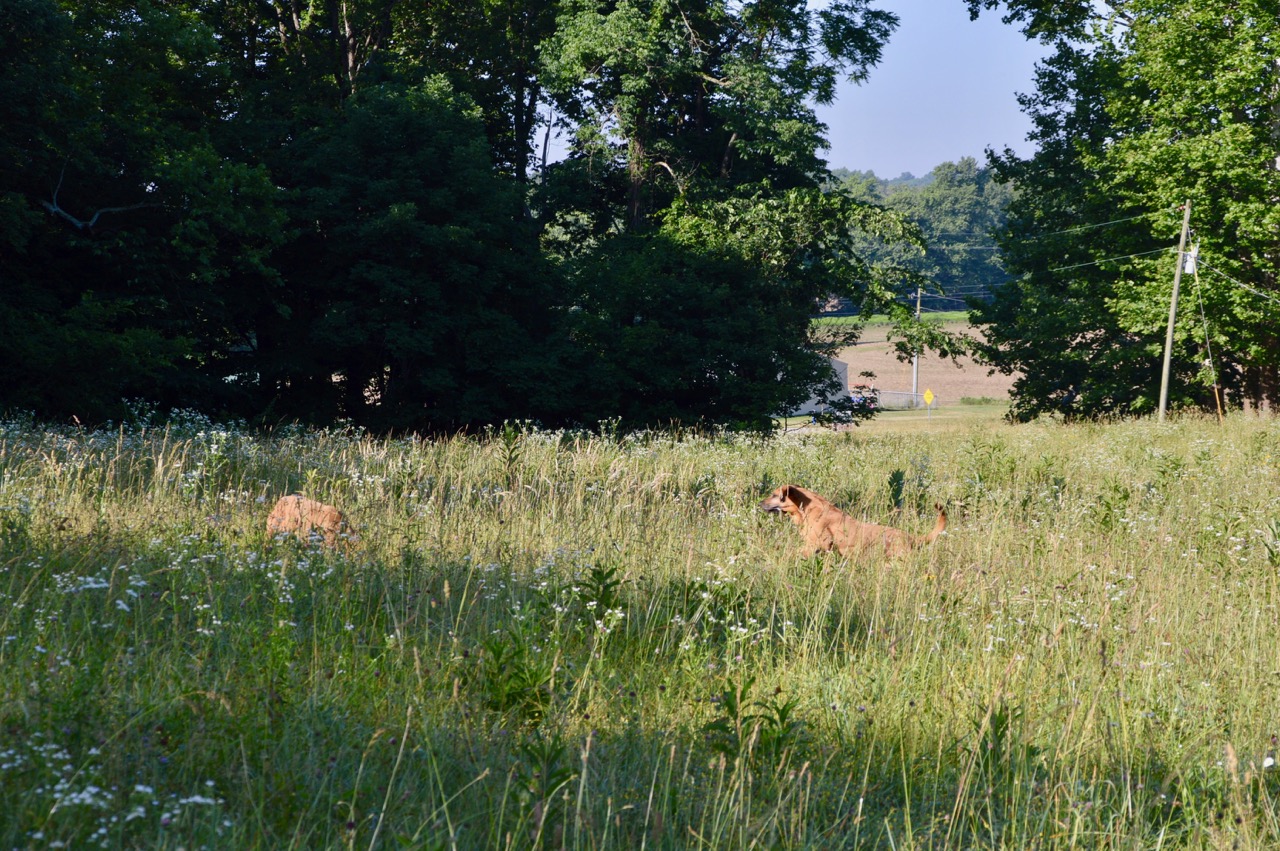 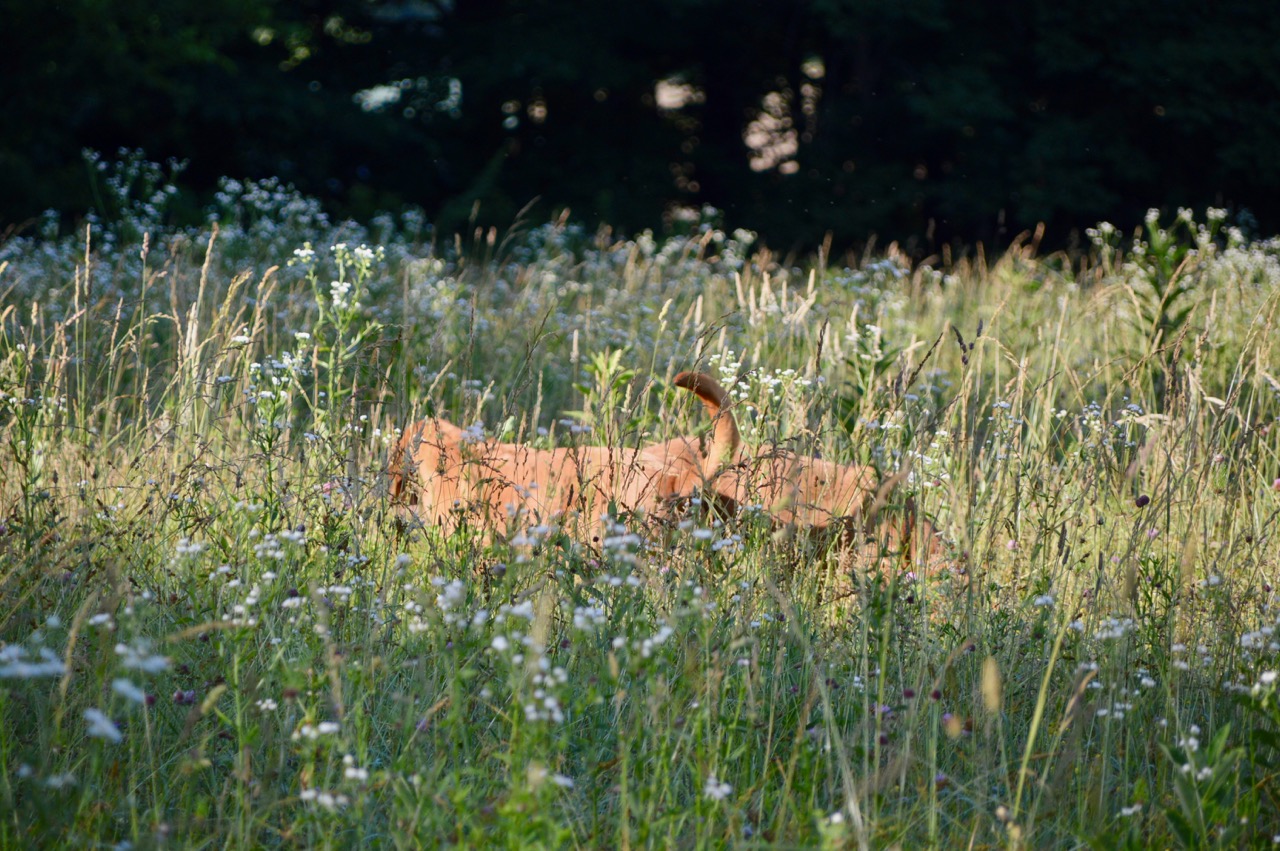 It is still strange to me how all of the white flowers are so small and the yellow ones are not what I consider full size. 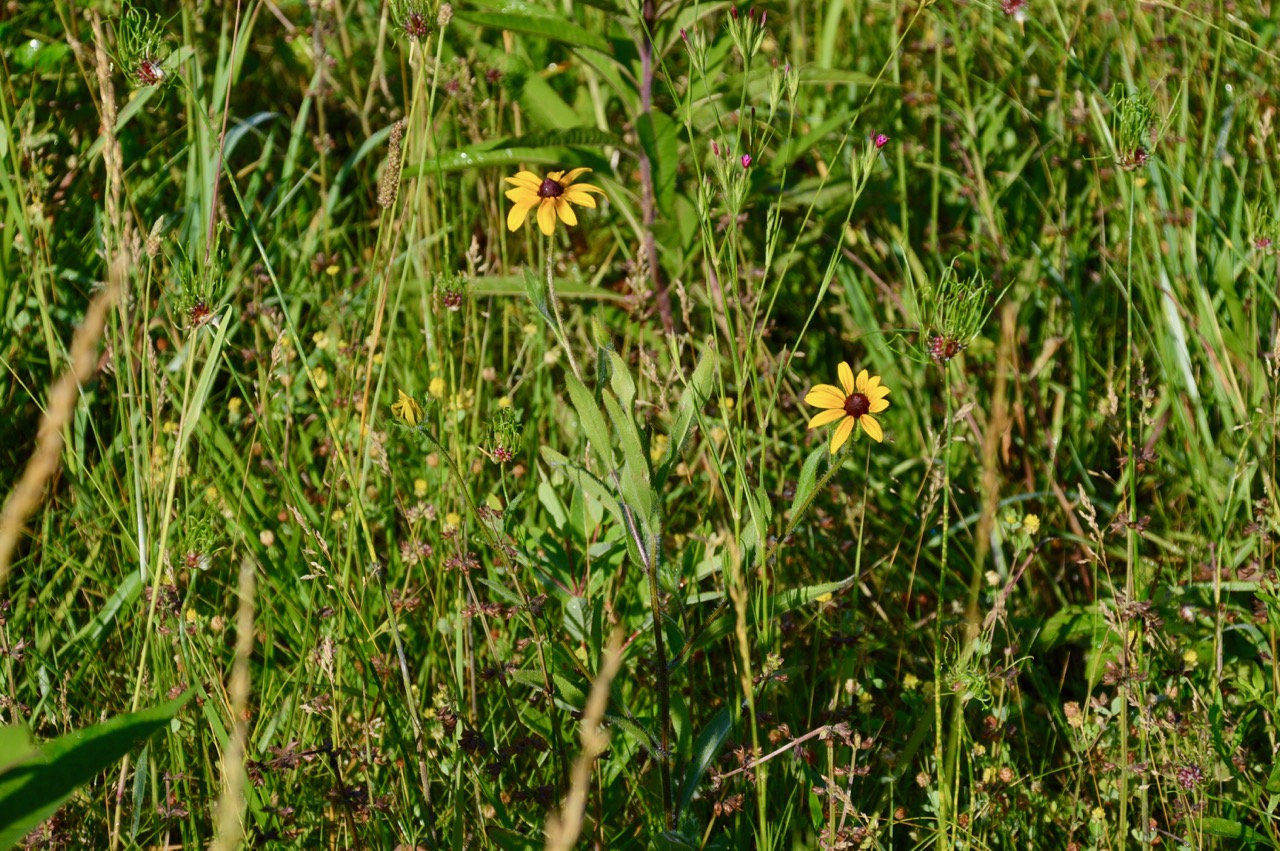 This shady part of the yard will be the best later today and this weekend. 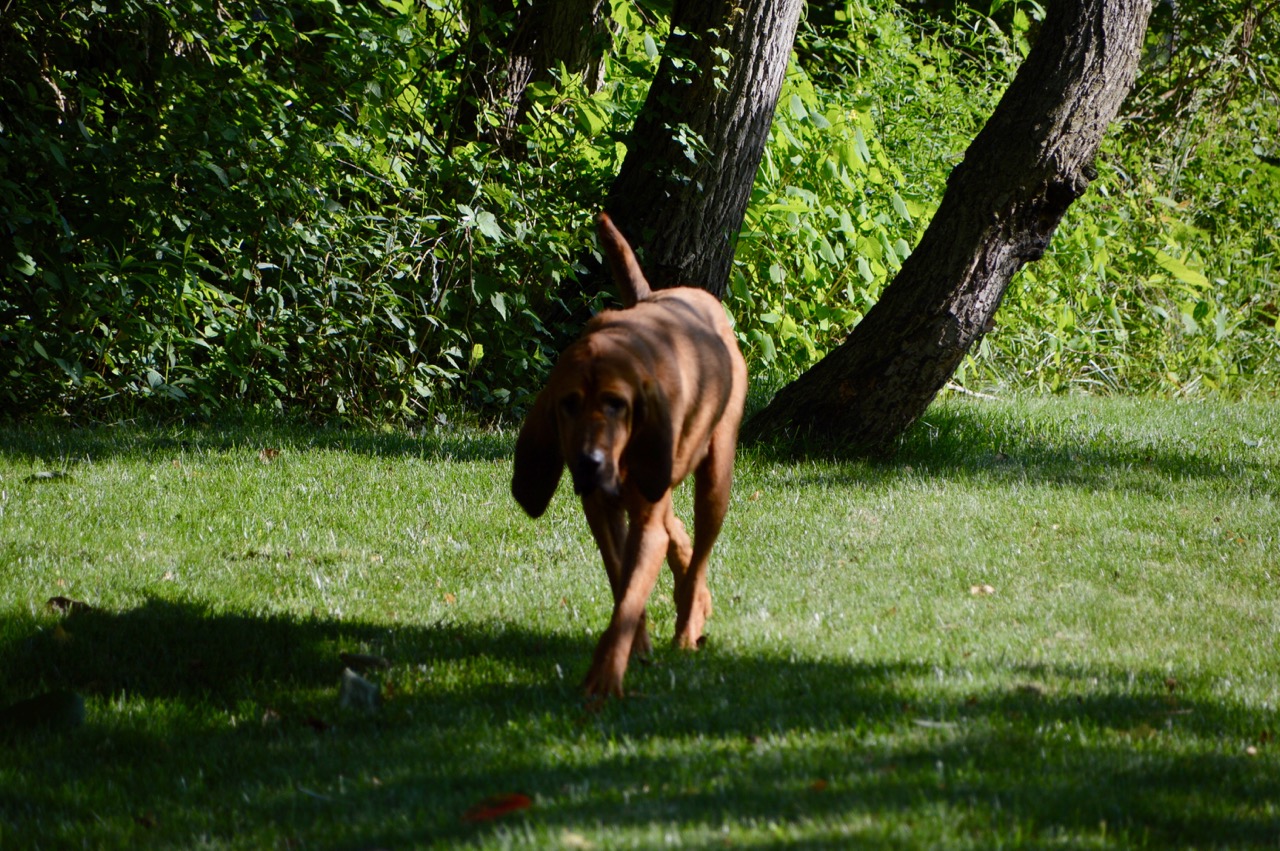 For those readers that like following my field pictures and commentary I am including this today. This view use to be my daily picture for the blog but when I went to the different format of compressing each post to have more visible on the home page I decided to change pictures every day.

You can see that the corn planted BEFORE the floods is doing very well and looking the best I've seen. The back half of the field and a half mile to the right is starting to grow. It will be interesting to see if they wait for it to catch up before the pick the corn this fall. I guess they will.

Still no plowing on the field to the left known as 'the field of yellow' nor the huge field behind the one we walk in. 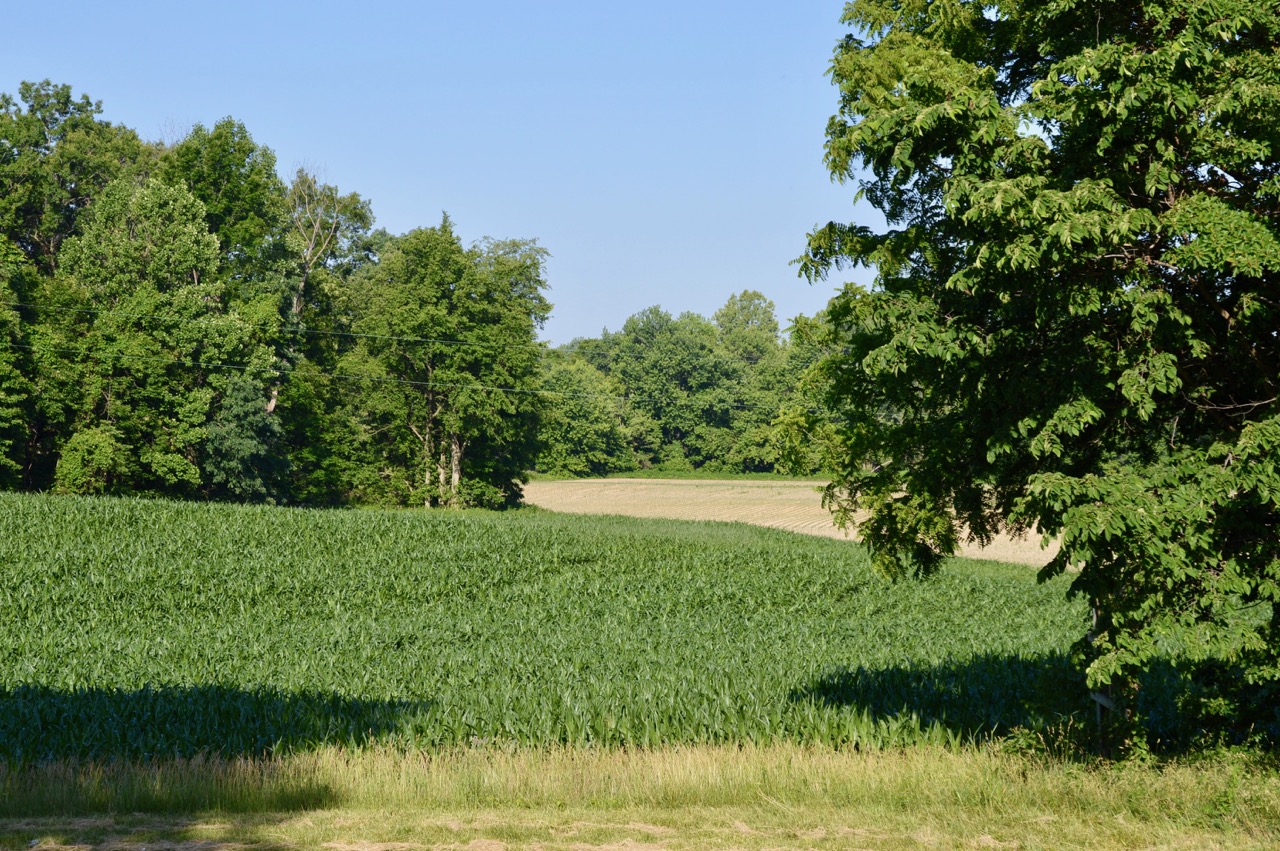 I've been doing a little retraining with Stella using the 25' retractable leash in the afternoon walks. Once she gets the 25' away, I tell her "over here" and lead her toward our direction gradually by retracting the leash IF she does not move that direction on her own. I can tell a difference when she walks without the leash when given that command in only a few short days of training. She had followed that 'over here' command the majority of times before the training but not all the time.

Sunny and a cool breeze this morning in 'the tropics' of Southern Indiana.
at June 09, 2017