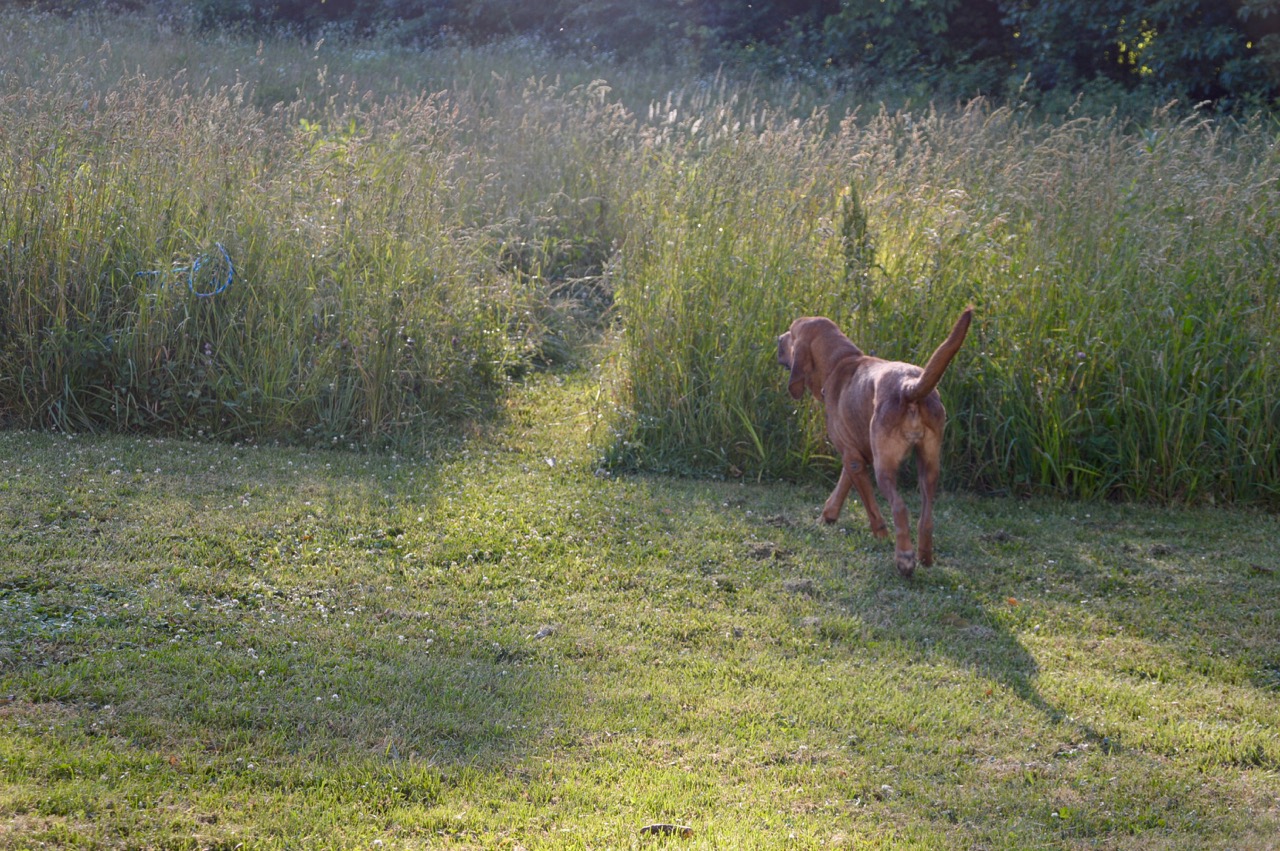 It was the fastest I had seen her move in months but I did not have my camera in my hand at the time. When I let the hounds out for their first trip outside to start the day, I pour out their breakfast kibble. By the time I am finished with that, usually all three hounds are jostling for position to get in the door first. Not today ... Stella wasn't there. 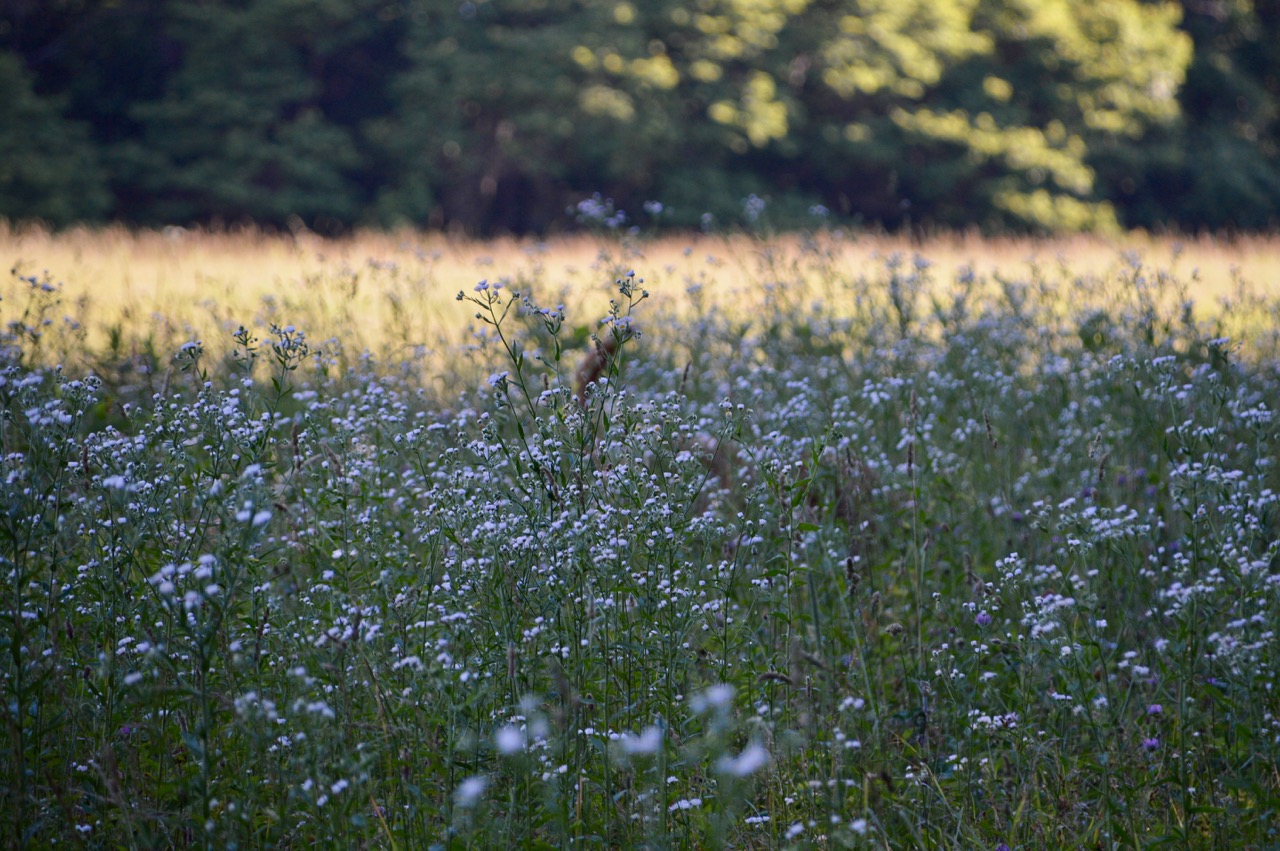 That meant she probably went out into the field to dump her tanks. I would not have to call her because when breakfast is served she knows it and will not miss it. As I stood at the door for less than a minute, Stella came "sprinting" round the house and Z4, fast enough her feet almost sled out from under her. 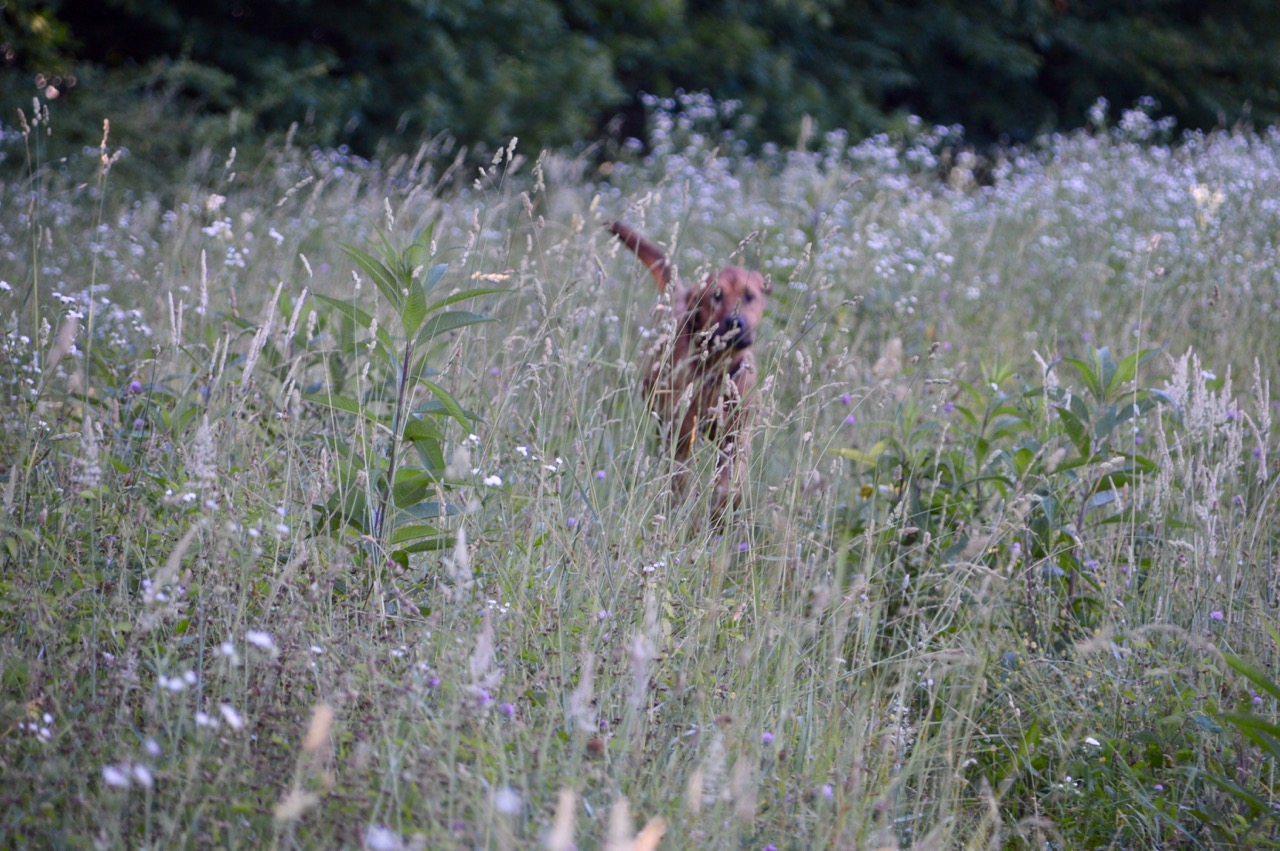 While I sneezed from the door to the field to start our walk at 8am, the hounds had taken off way ahead of me. Once I could see again, Stella had her tail in the air and was trotting all over the field. I had decided this morning to let her be on her own since the tree trimming crew were not there this morning. 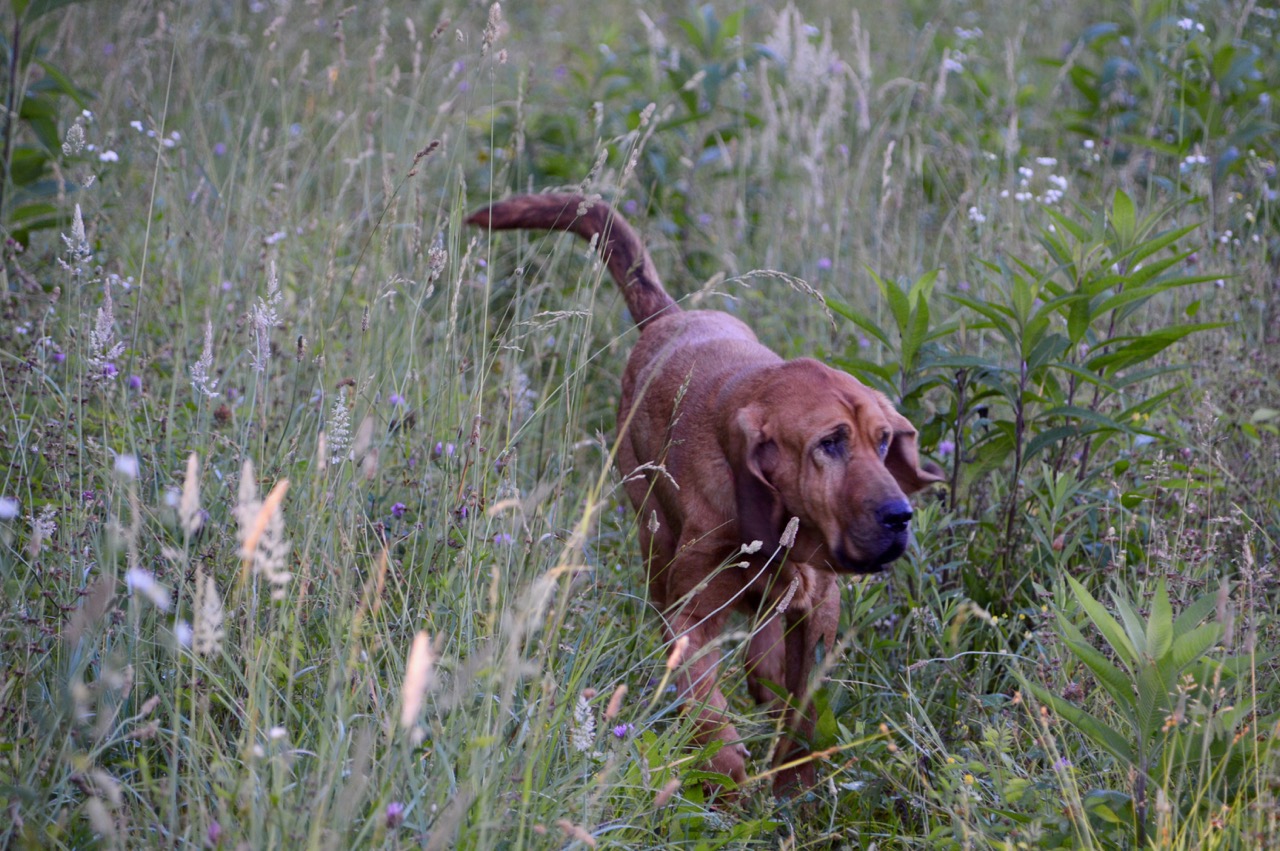 About the time I turned to check on her, she was trotting toward me in almost a run. Her increased stubbornness during her walk convinced me she was feeling better.

There are going to be more wild berries than normal it looks like. They will not be mine though, the neighbor a few houses down that owns the field will take a few trips along the border of his field in his ATV to pick enough of them for his wife to make some pie. 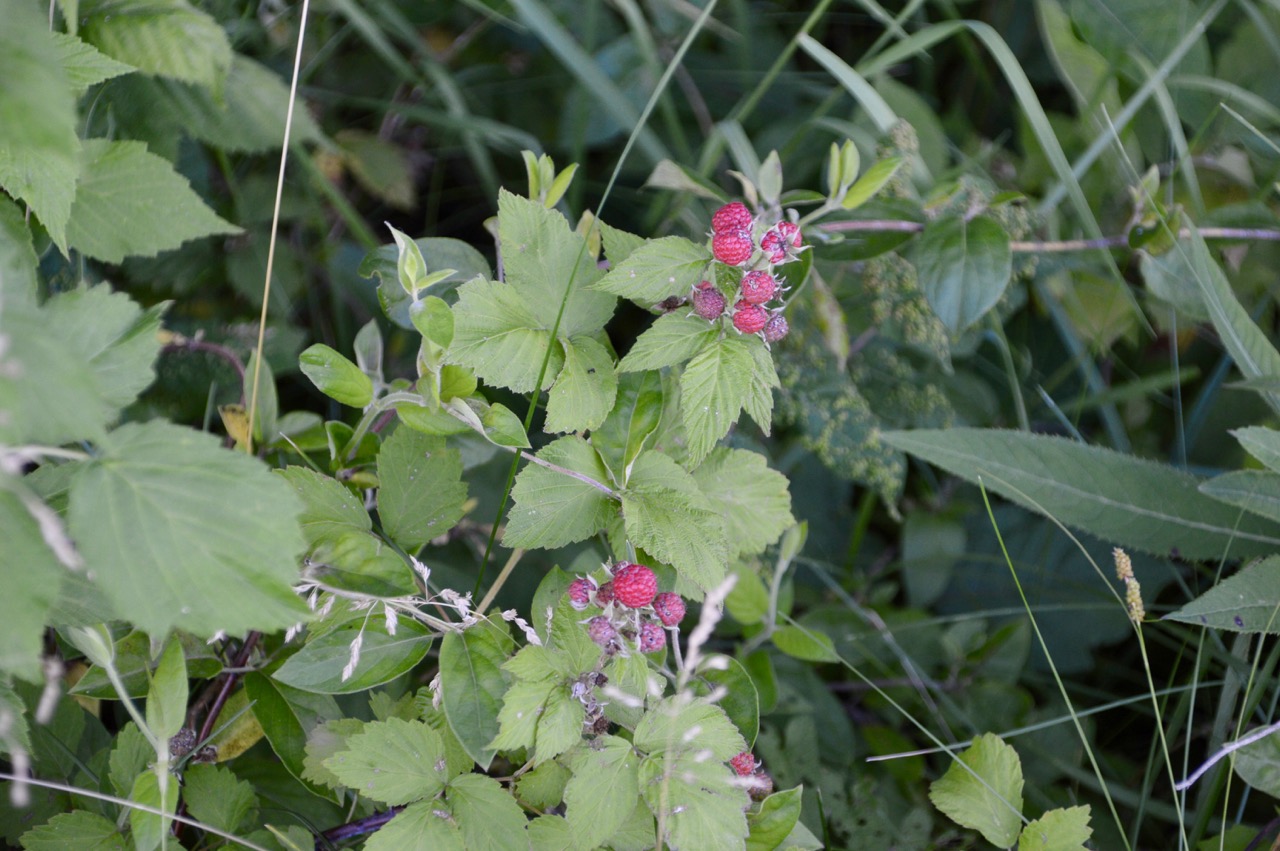 Sadie paid no attention to either me or Stella as she was way out in front and on her own schedule. A lot of new ground scents this morning, she was all over the field moving in all directions. 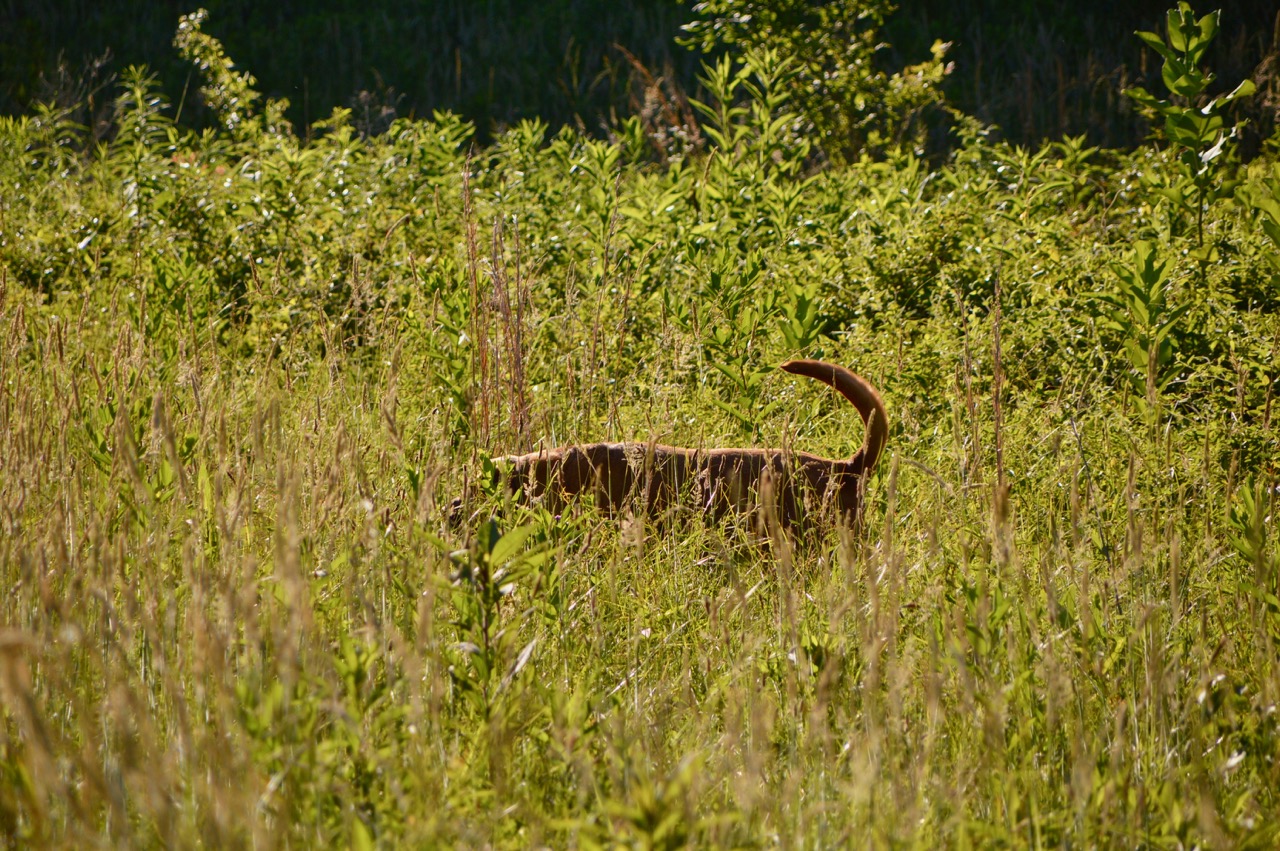 Stella found multiple spots of new fresh deer scat. During her final stop I had to go back and get her ... she didn't like that I came to get her. 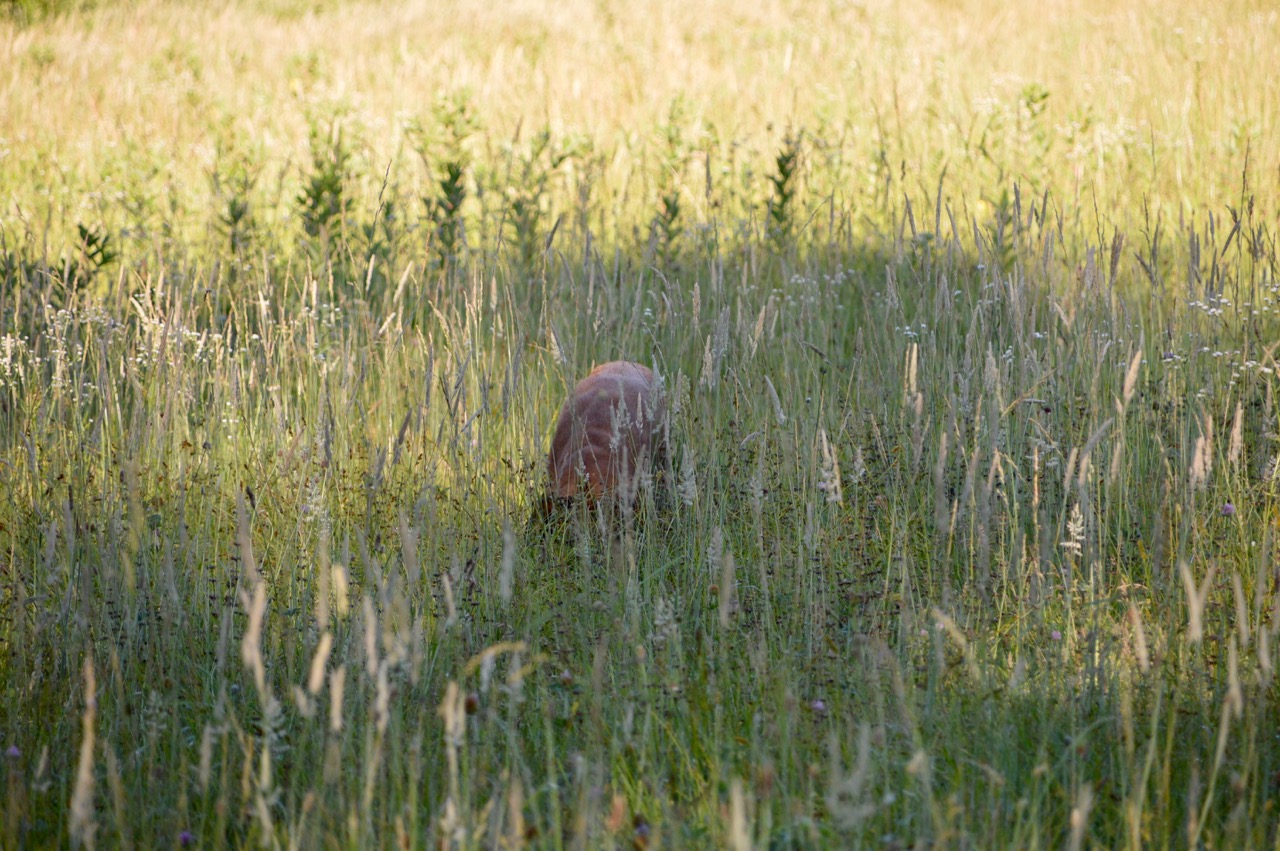 Sadie is doing some massive shedding. I brushed out her undercoat outside. I put this piece on her back to take the picture but it came out from the thick fur on back of her shoulders. Pretty amazing what is considered a short haired hound could product that much hair underneath what you see. 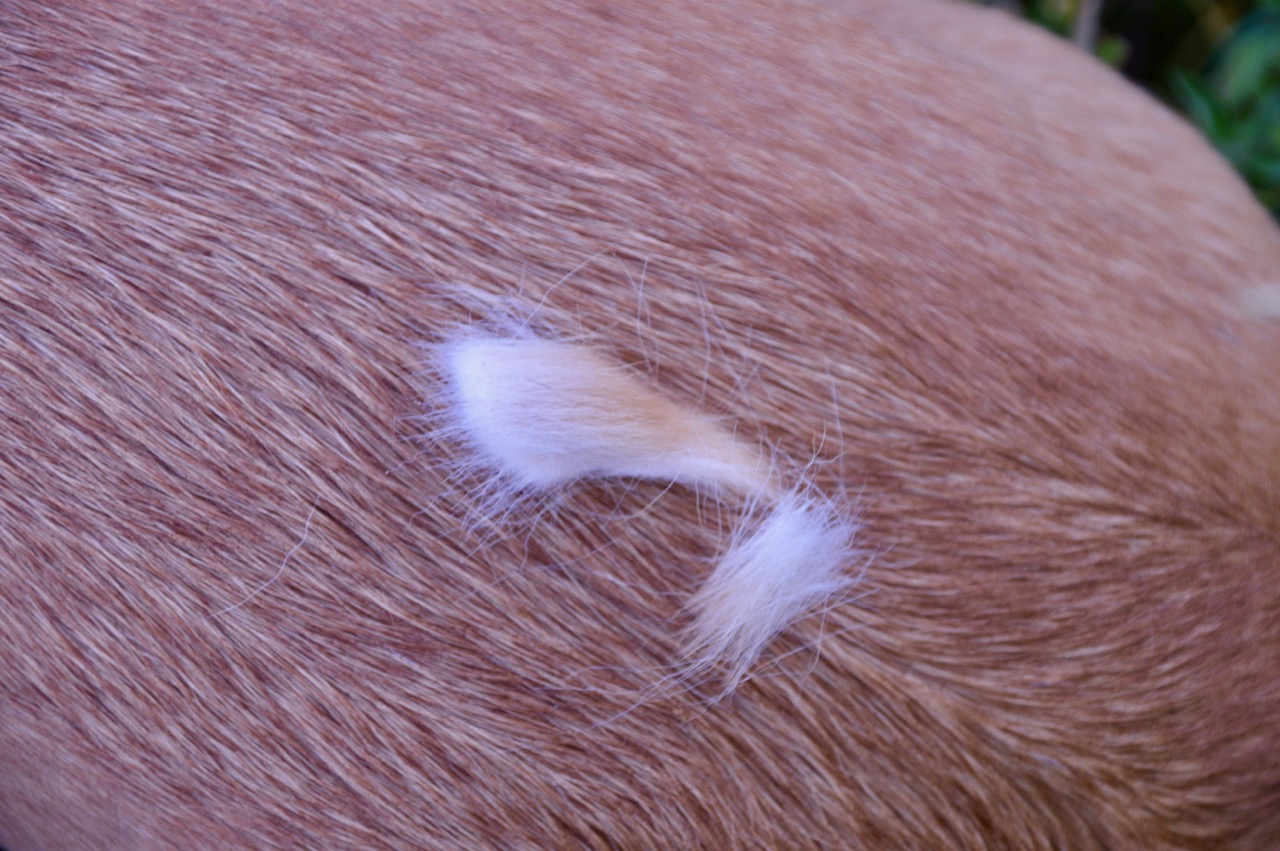 It was 60° this morning when we started the walk, perfect weather for me and the hounds to start our day ... with no plans. We will be flying by the seat of our pants today. A lot of possibilities to do, including nothing. Both of them were going to stretch out their morning walk as long as possible. 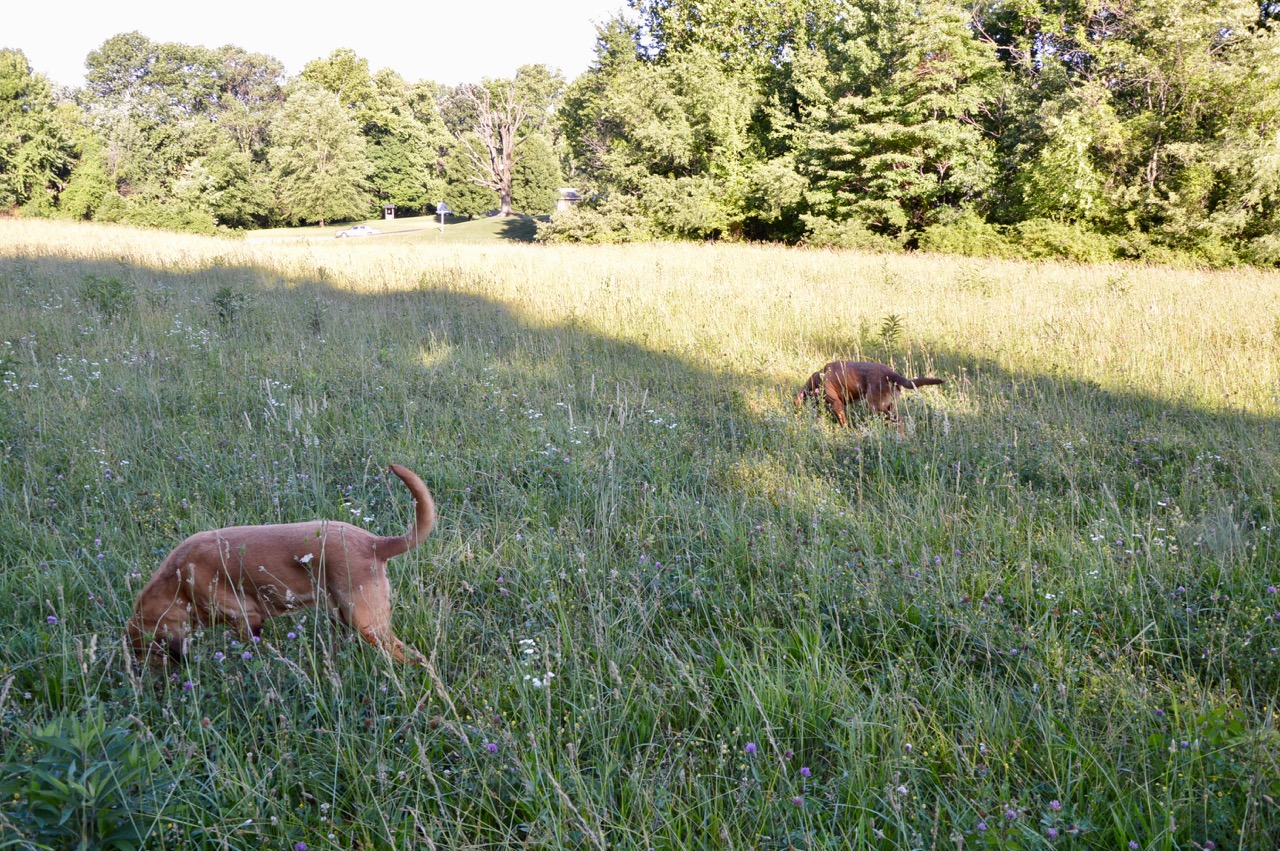 It occurred to me this morning that by this time next month, it's most likely the field will have been cut and baled into large rolls of hay ... grass, flowers, berries, weeds and all. 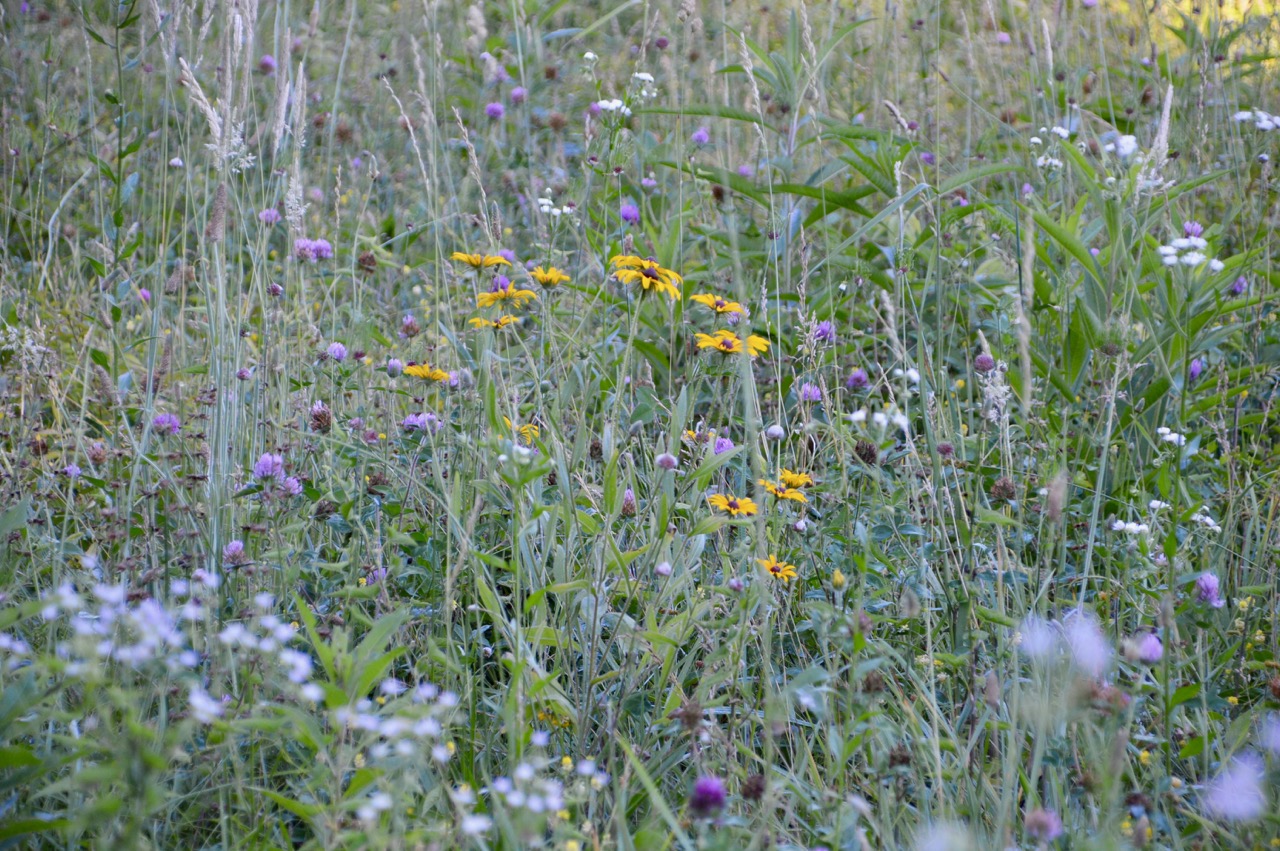 Out of all the afternoon possibilities, "nothing" was the theme for the day or maybe "sleep" was. It was a bizarre afternoon. For some reason after consuming my Jif peanut butter and strawberry jam sandwich on wheat bread it felt like I had been hit up the side of my head with a hammer. It wasn't a headache but a feeling of being extremely tired ... so I went to bed for a short siesta.

The siesta was strewn with some of the strangest dreams I can ever remember. I was beginning to wonder if I was feeling the effects of a tick bite I had the other day where I didn't catch it on my post-walk inspection. Luckily Sadie thought someone was at the door or heard a noise she didn't like because she woke me up around 3:30pm with her barking that was in the attack mode. It was a good time for a walk ... 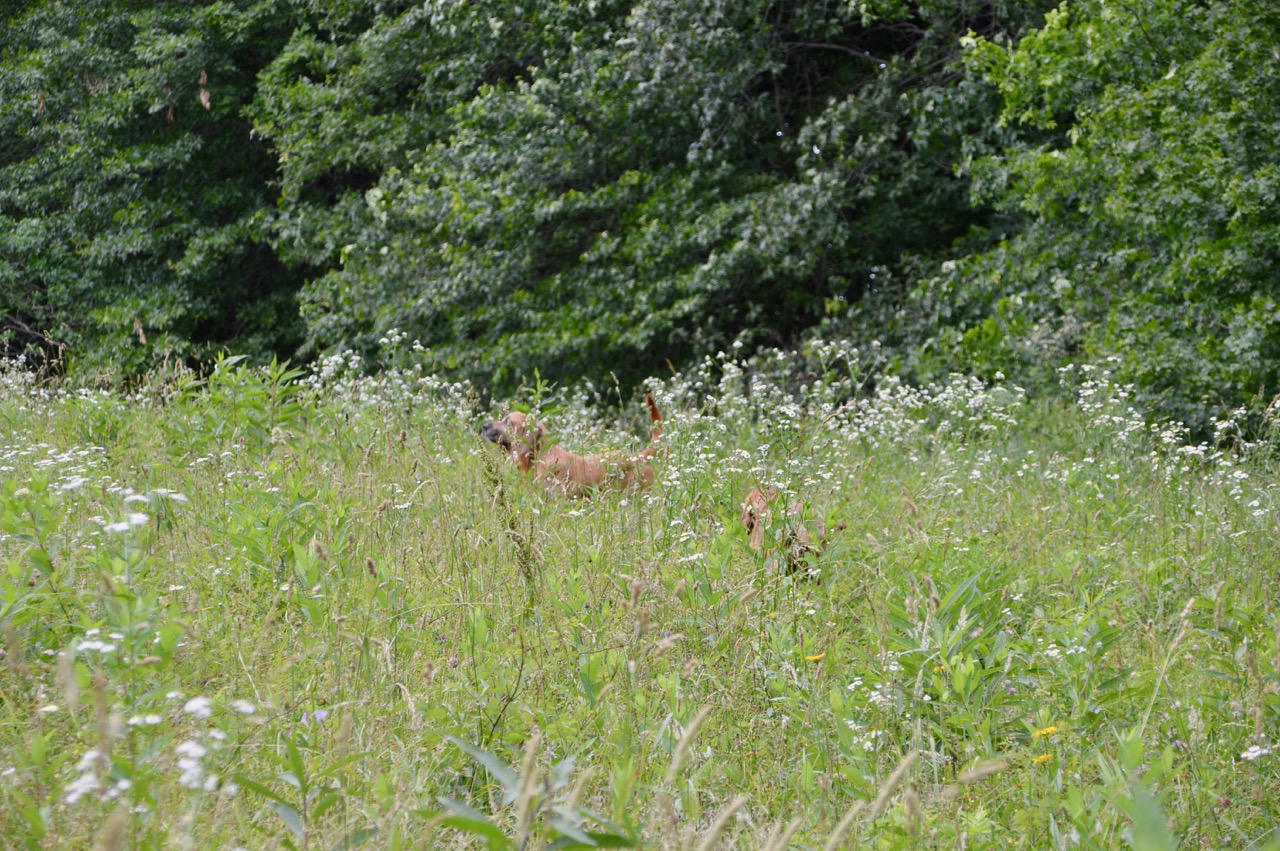 Stella continued her day of more energy and acting like her old self. She kept up speed on the walk plus by this afternoon tried numerous times to veer over the to woods behind the neighbor's house to see if that big blonde cat was around. It was like 'herding' hounds today as I tried to keep both of them headed in the general direction together. 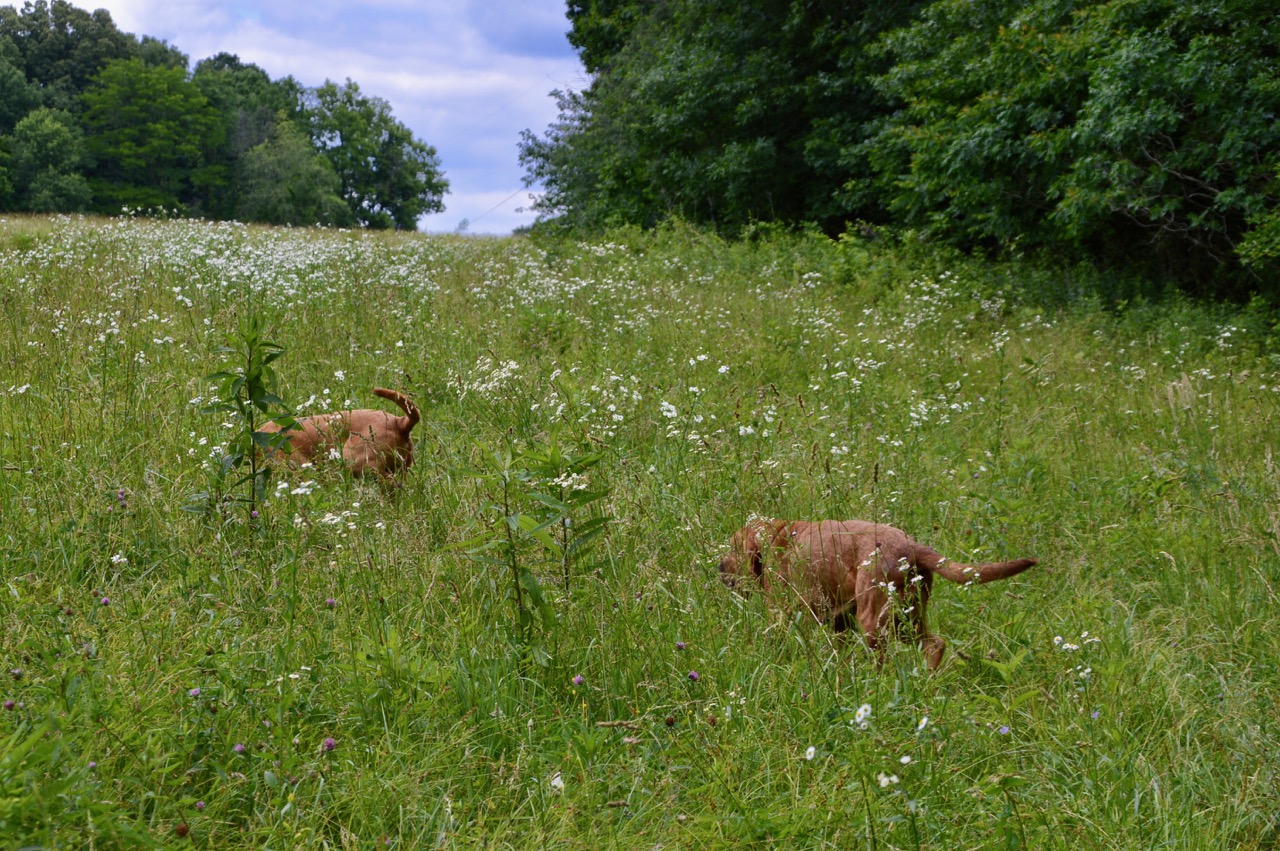 While Sadie was on one side of the field ... 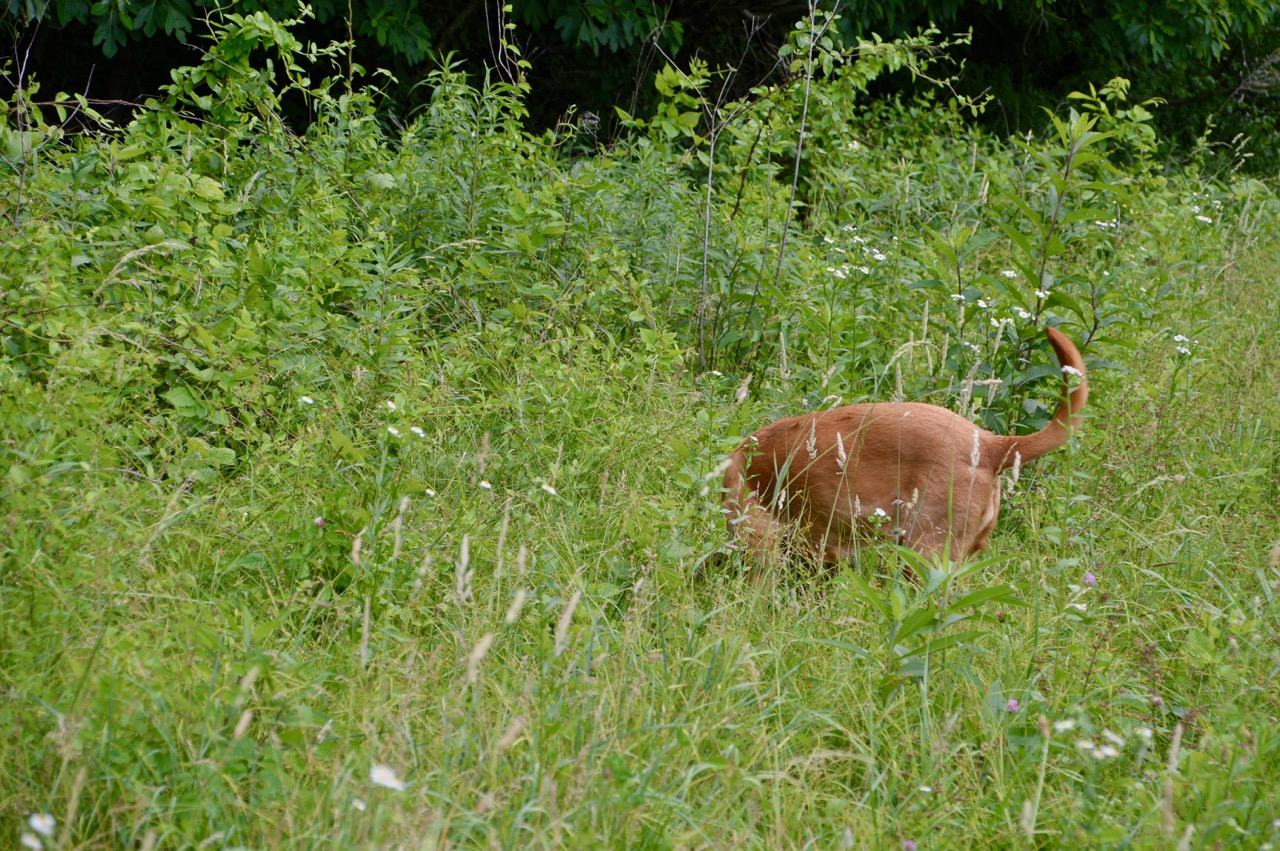 Stella had snuck off and was headed toward the other woods. 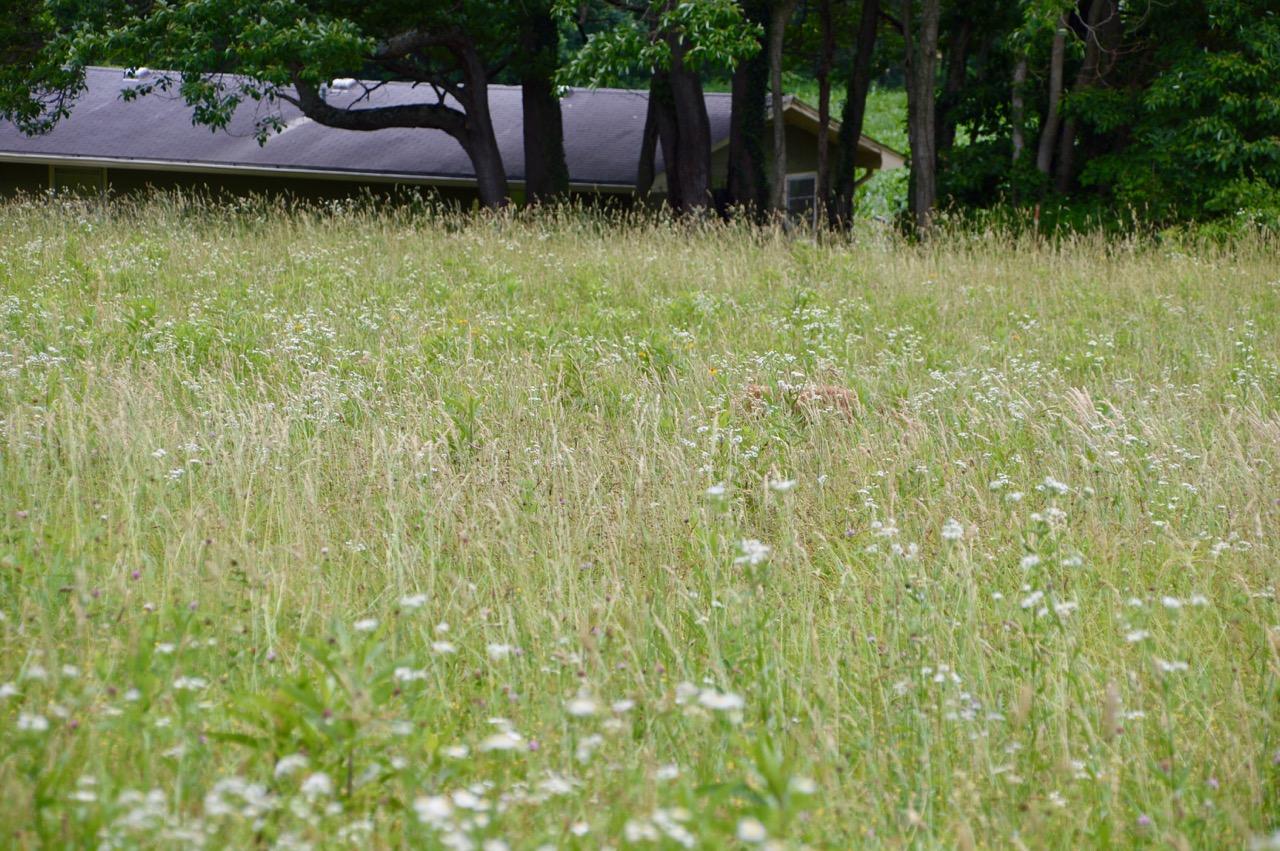 She turned and headed toward me when I yelled her name and added "over here" ... it's funny how she reacts to those two words. 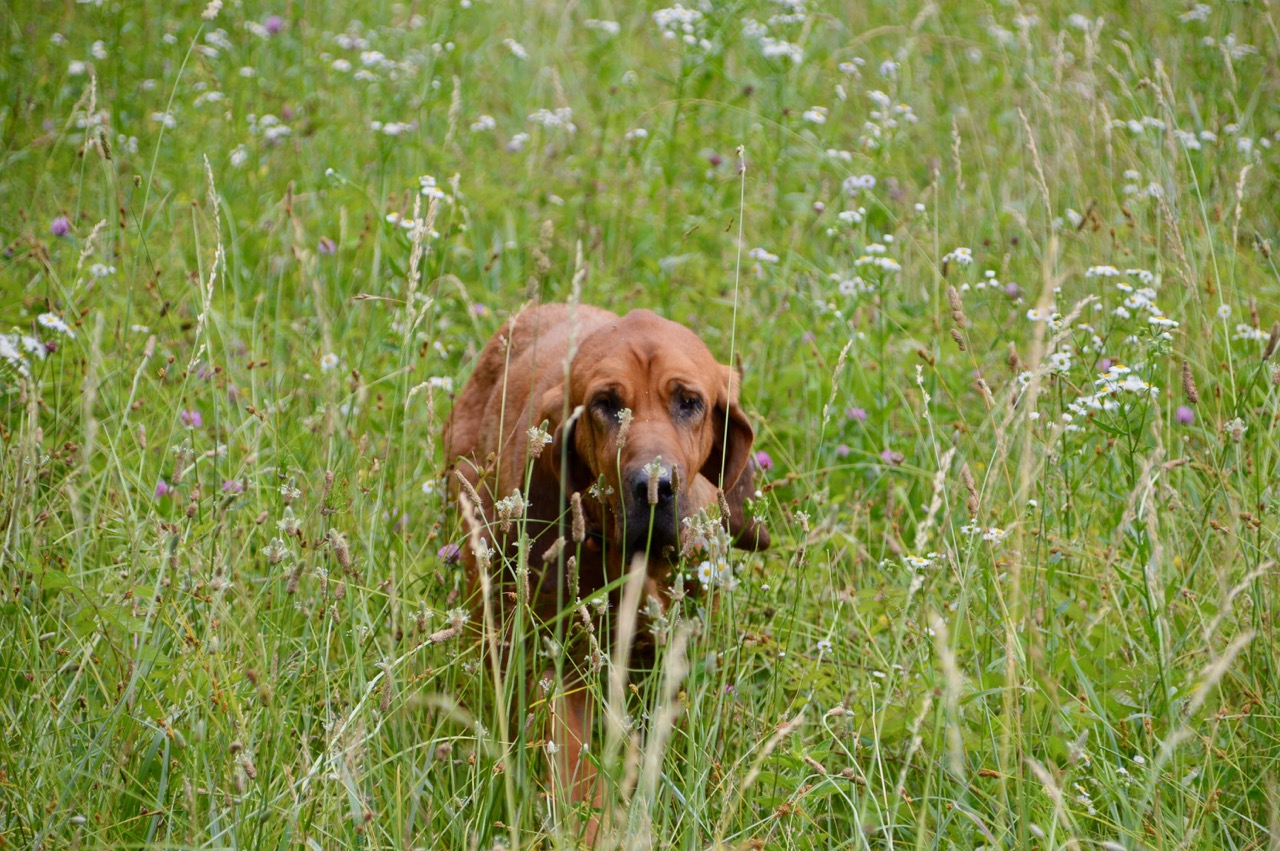 I still cannot believe how cool it was this afternoon. The wind had picked up speed and was strong enough to keep the tall grass and flowers leaning to the right. 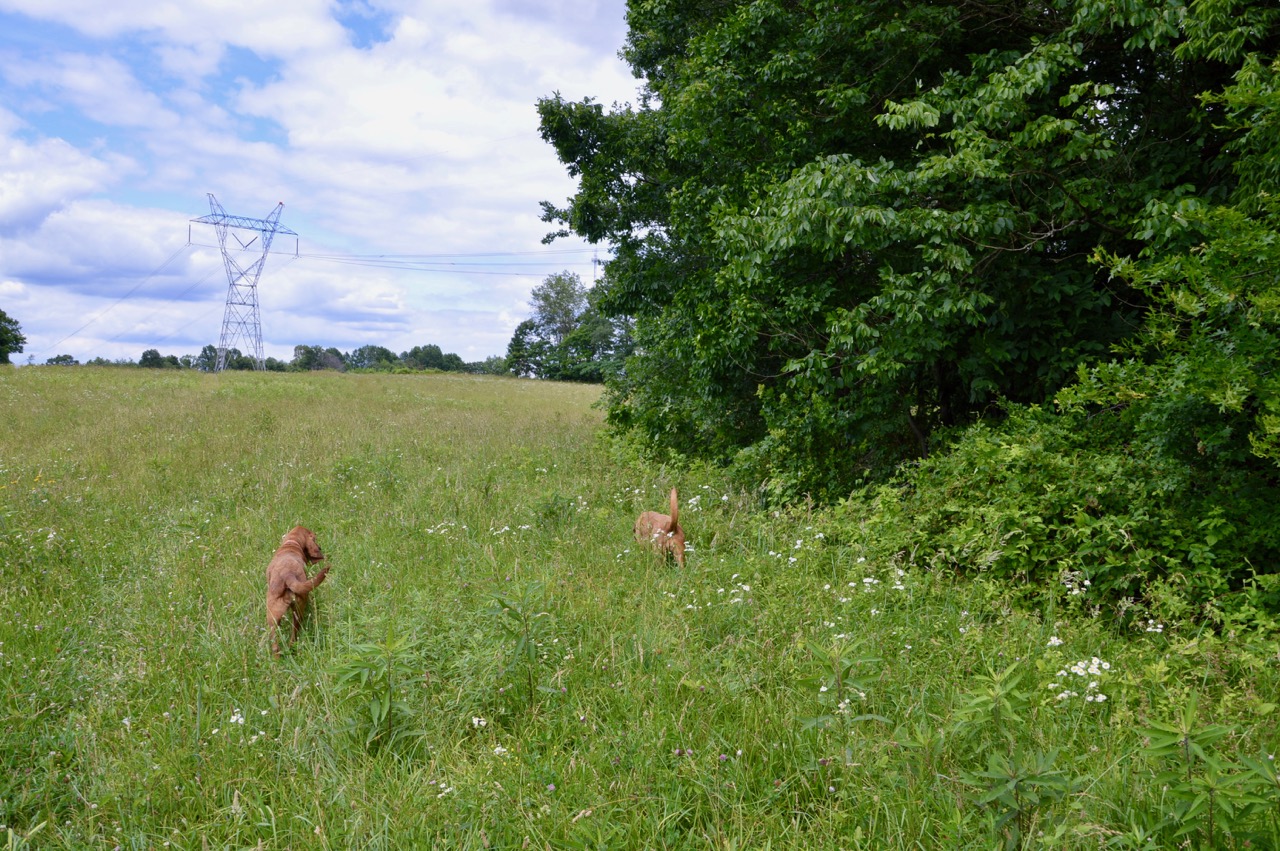 At a pace faster than I had seen in a while, Stella headed up the path without looking back and just kept on walking ... as if she was going somewhere specific. It wasn't a trot nor a run but a much faster walk than I had seen her do in a long time. 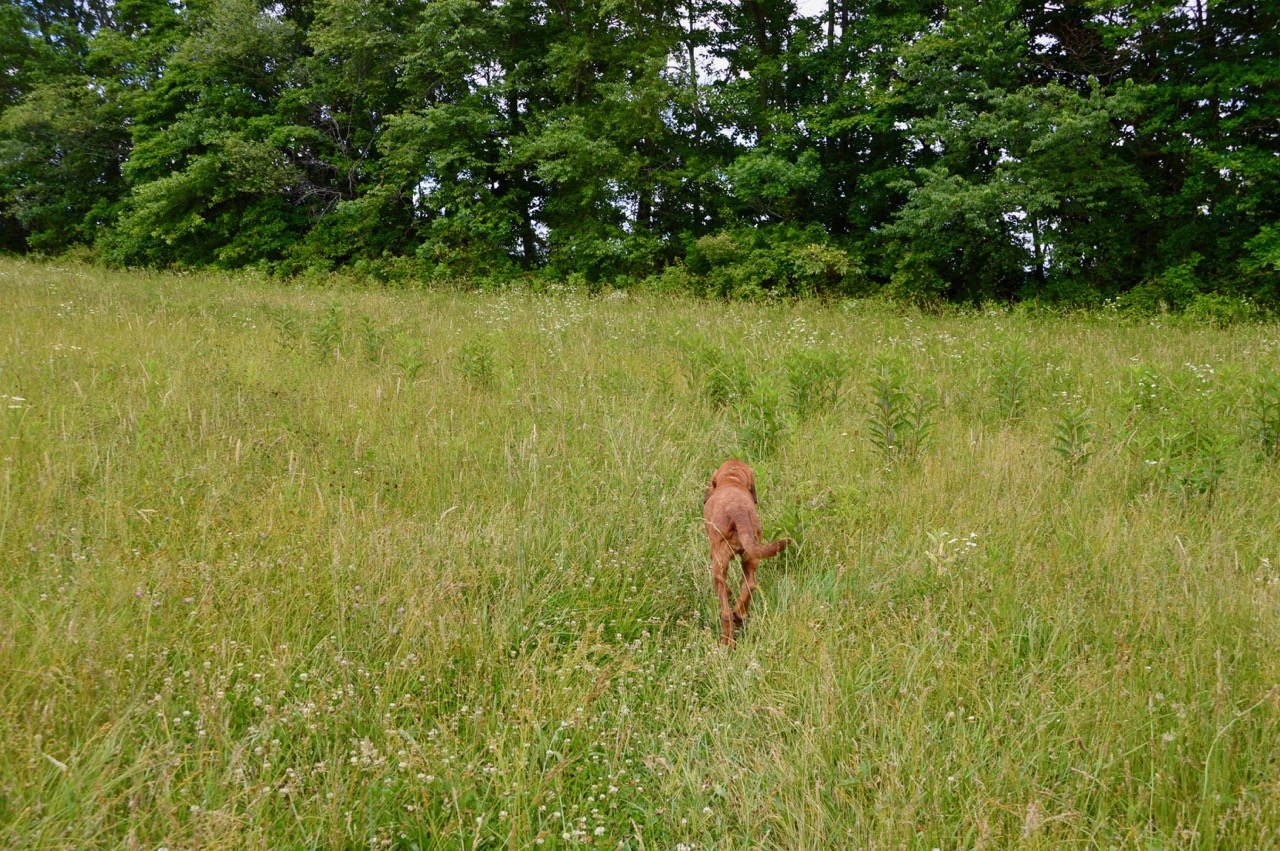 Sadie continued her search behind us. 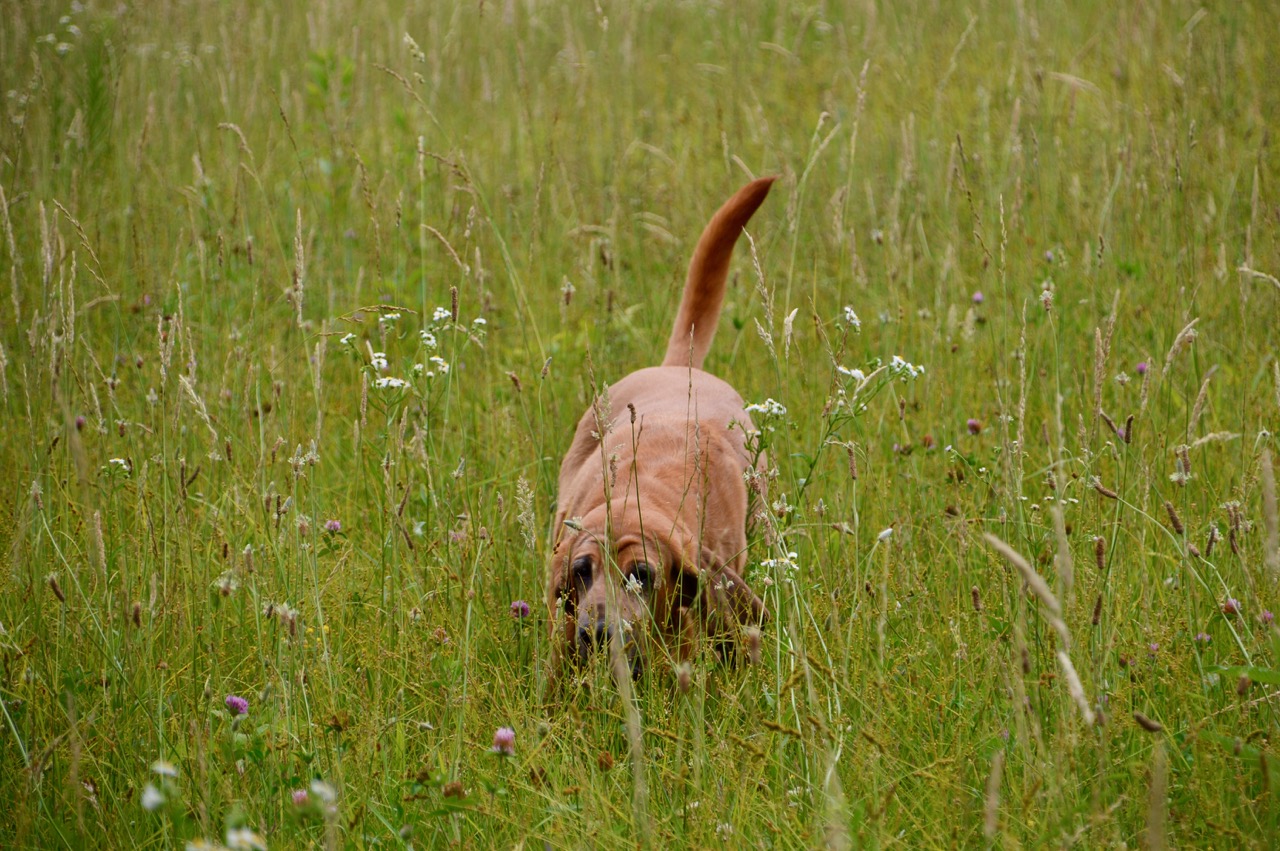 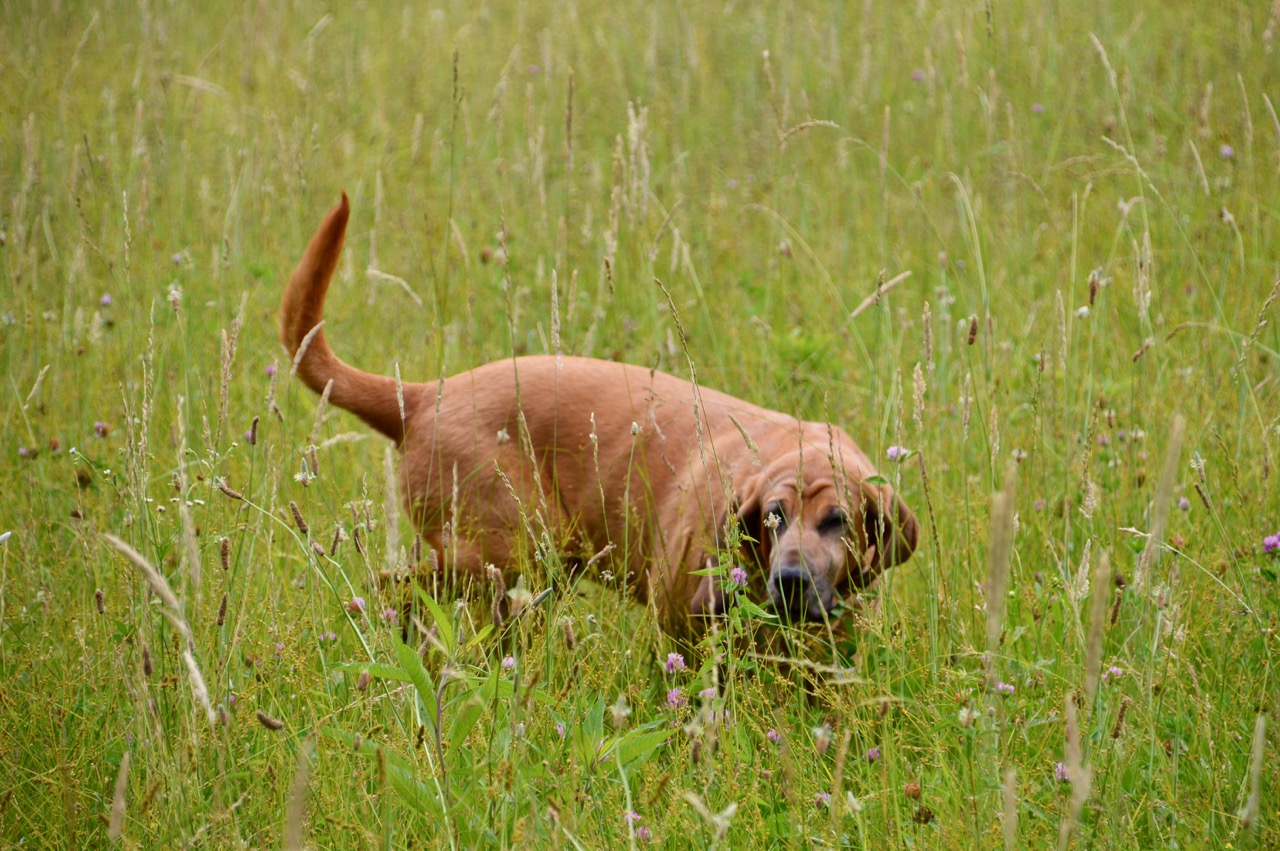 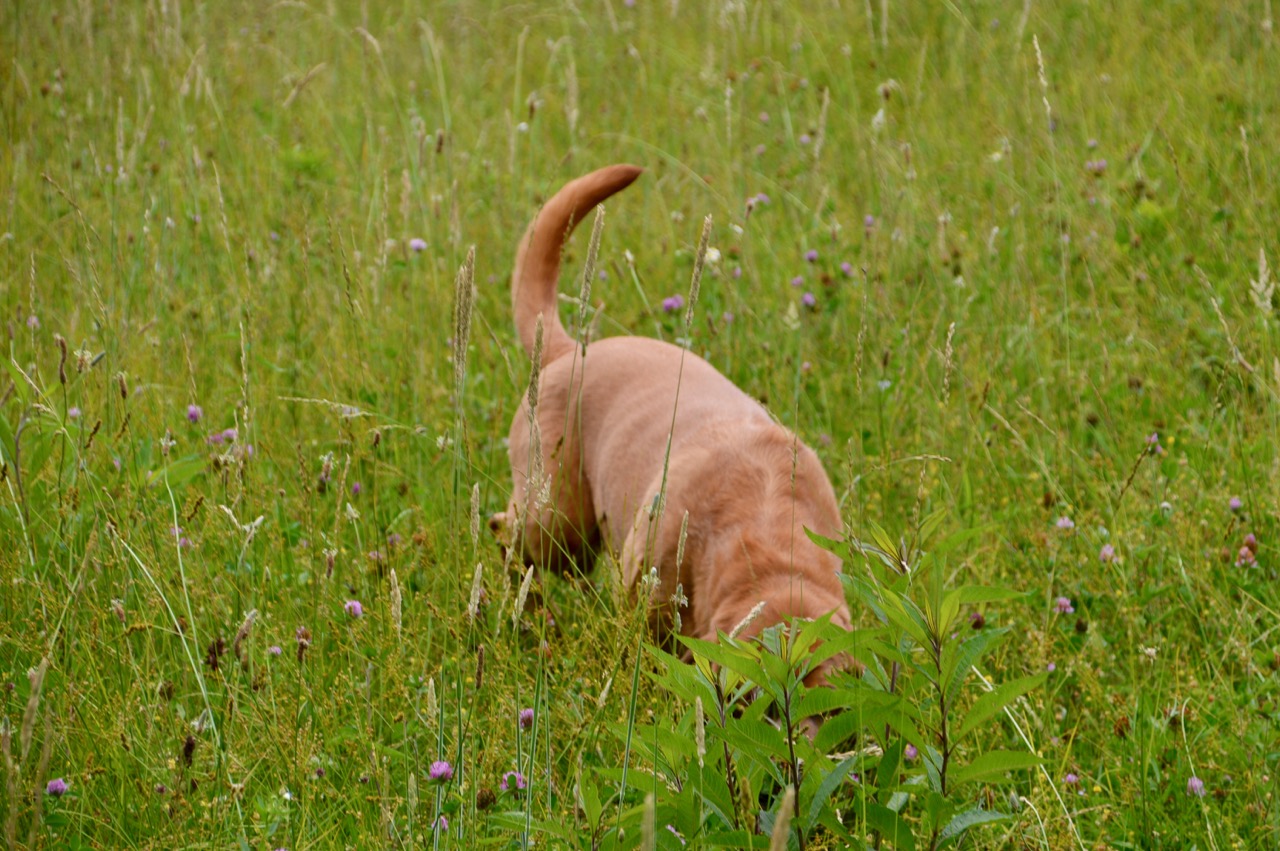 Every once in a while I'll see a solo flower in the 7 acres of field. 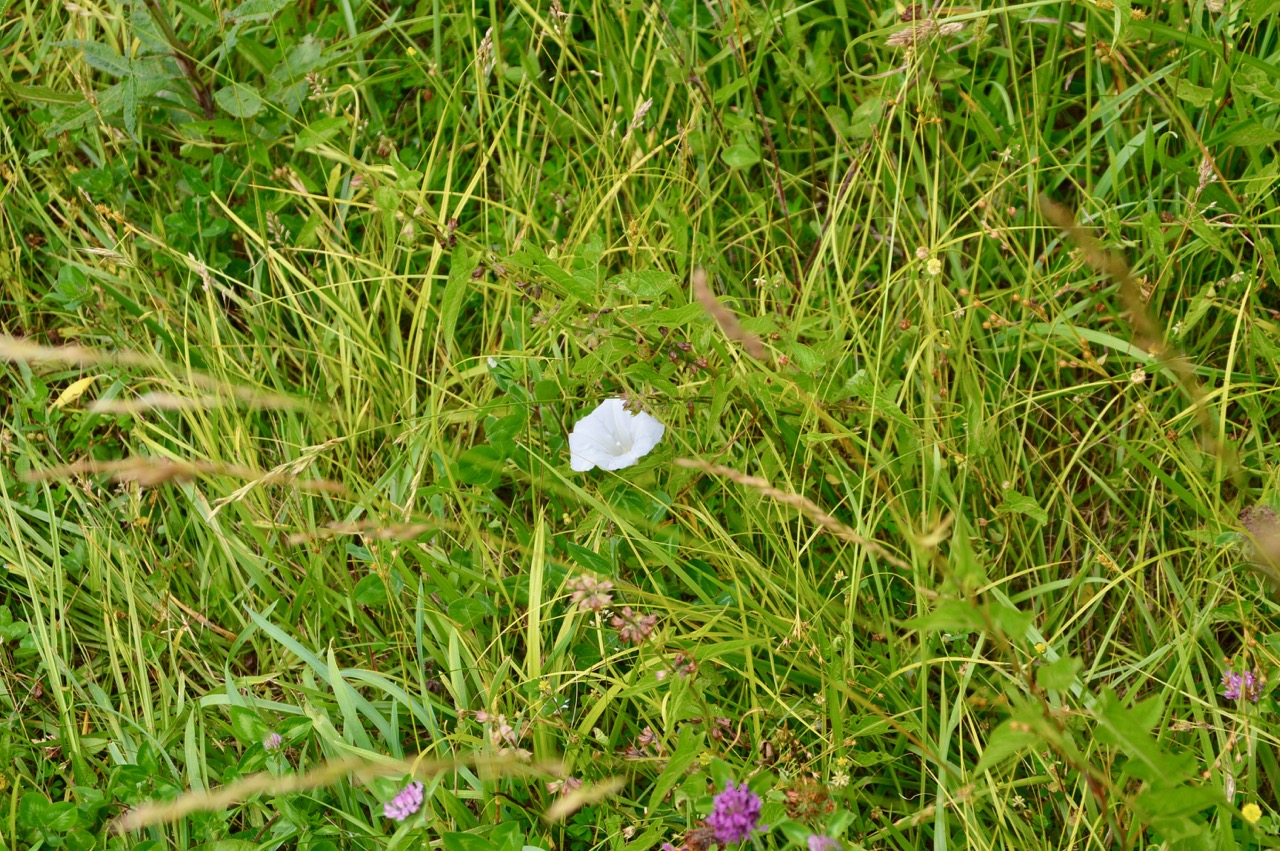 One the way Stella was ready to head home and call it a day. She had plans for more sleep. I got a dose of how it feels to be a hound with all the sleeping I did today. 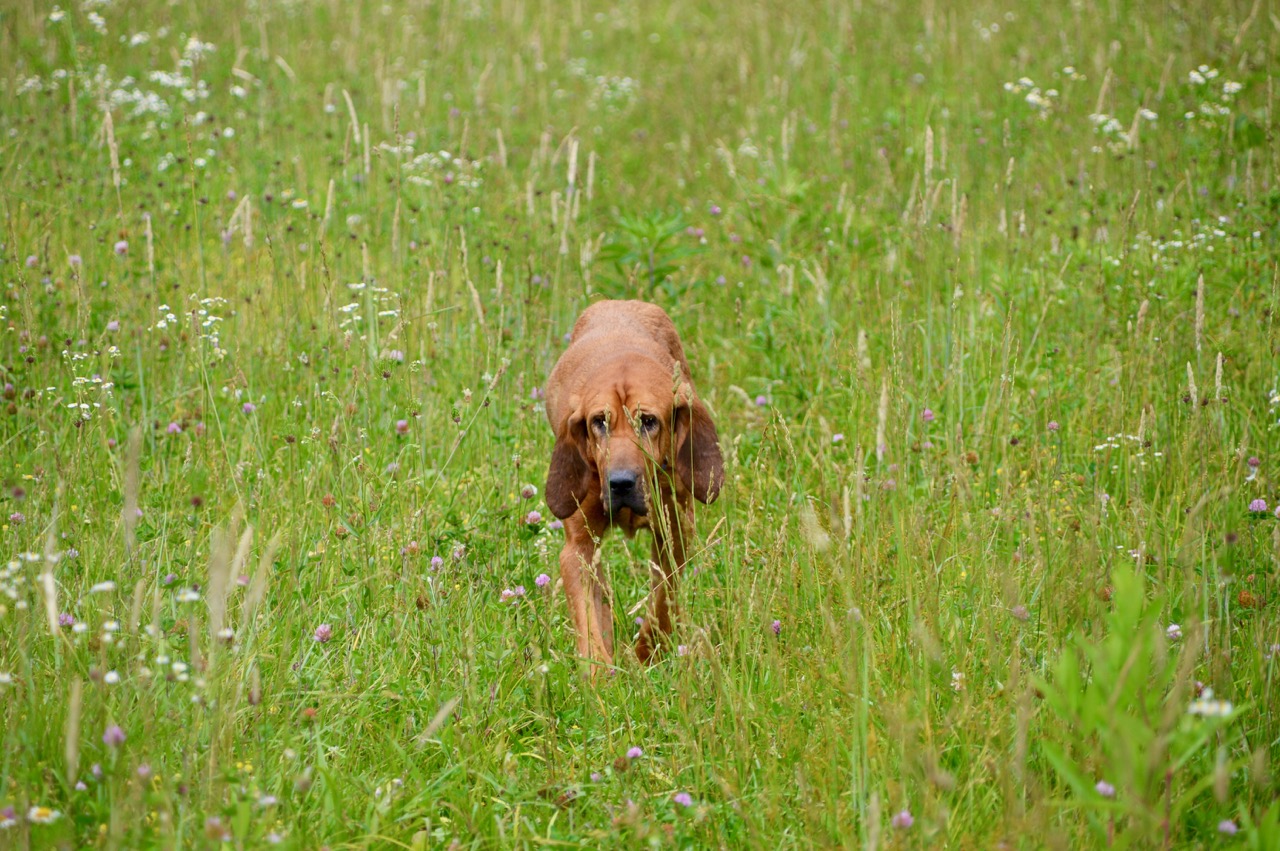 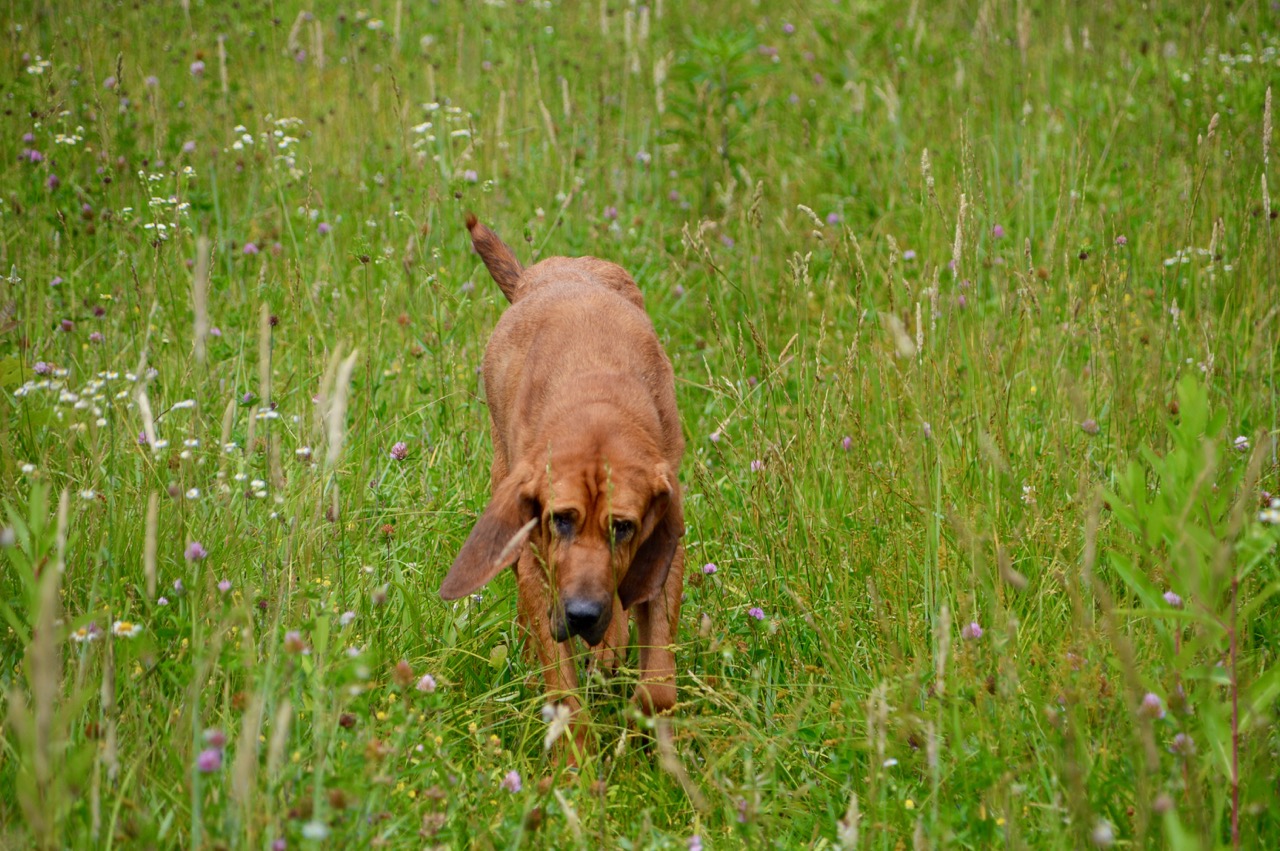 During our half mile walk I did not see a bee or butterfly anywhere. 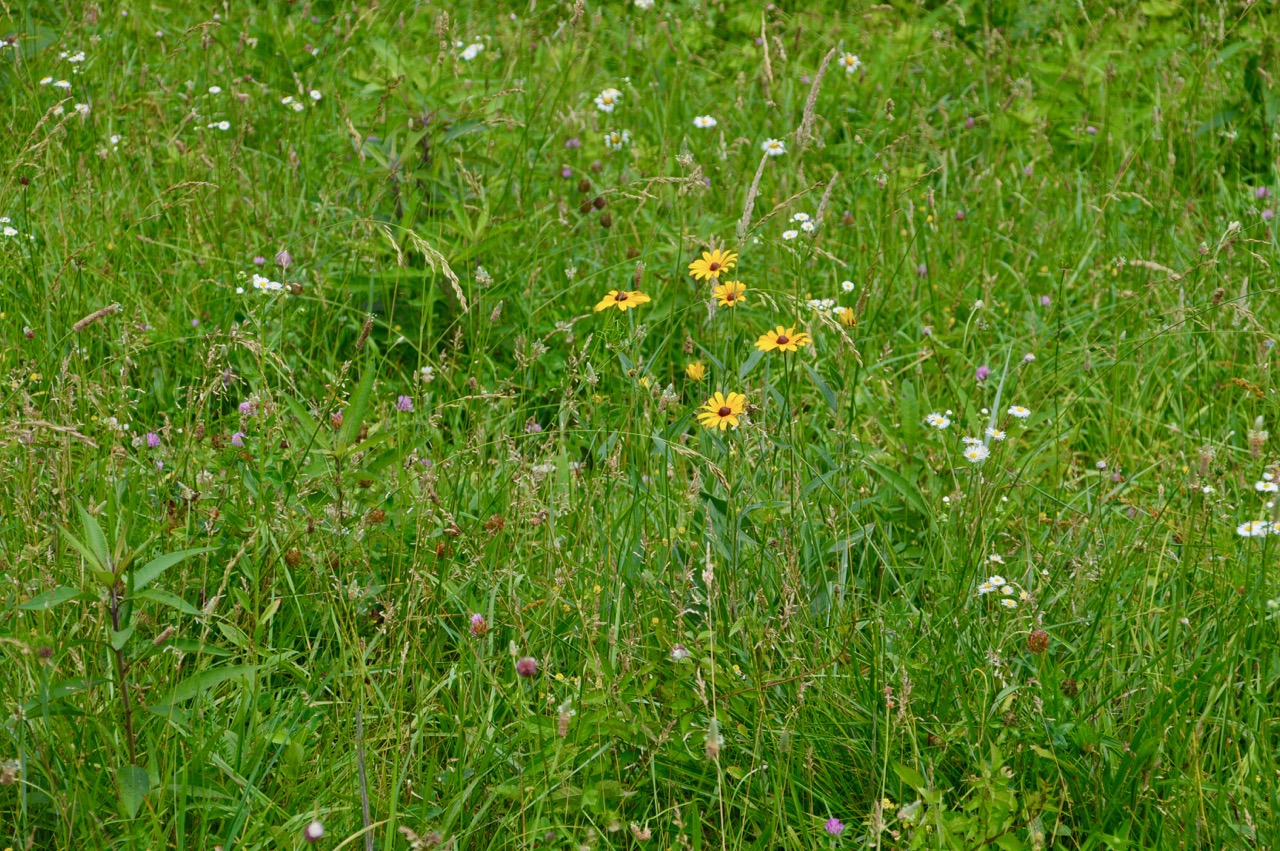 Once last attempt to slide over to that wooded area. She must think I cannot see her. 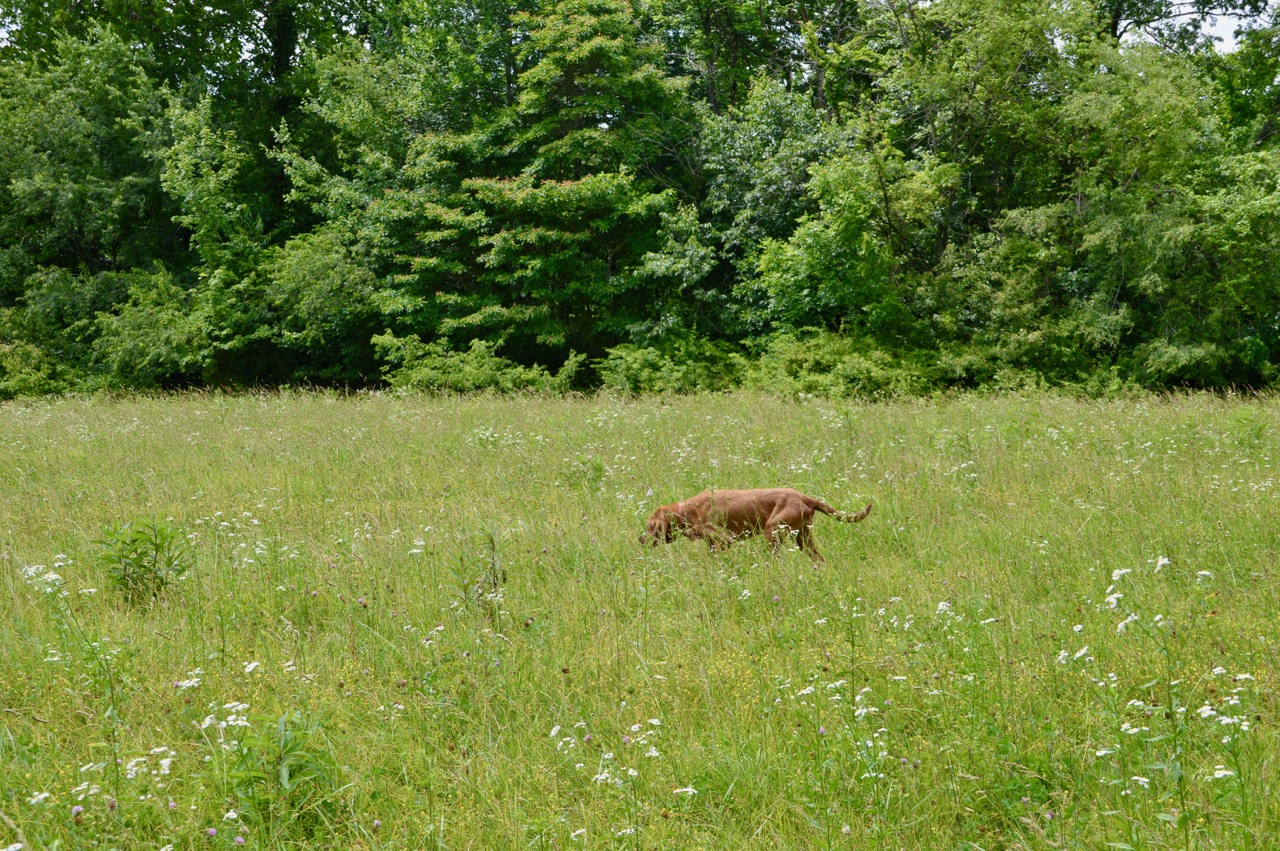 Sadie was still more interested in her own exploration. Can you get the idea how hard it would be to have those two on a short leash traveling and staying at different State or Federal RV parks? 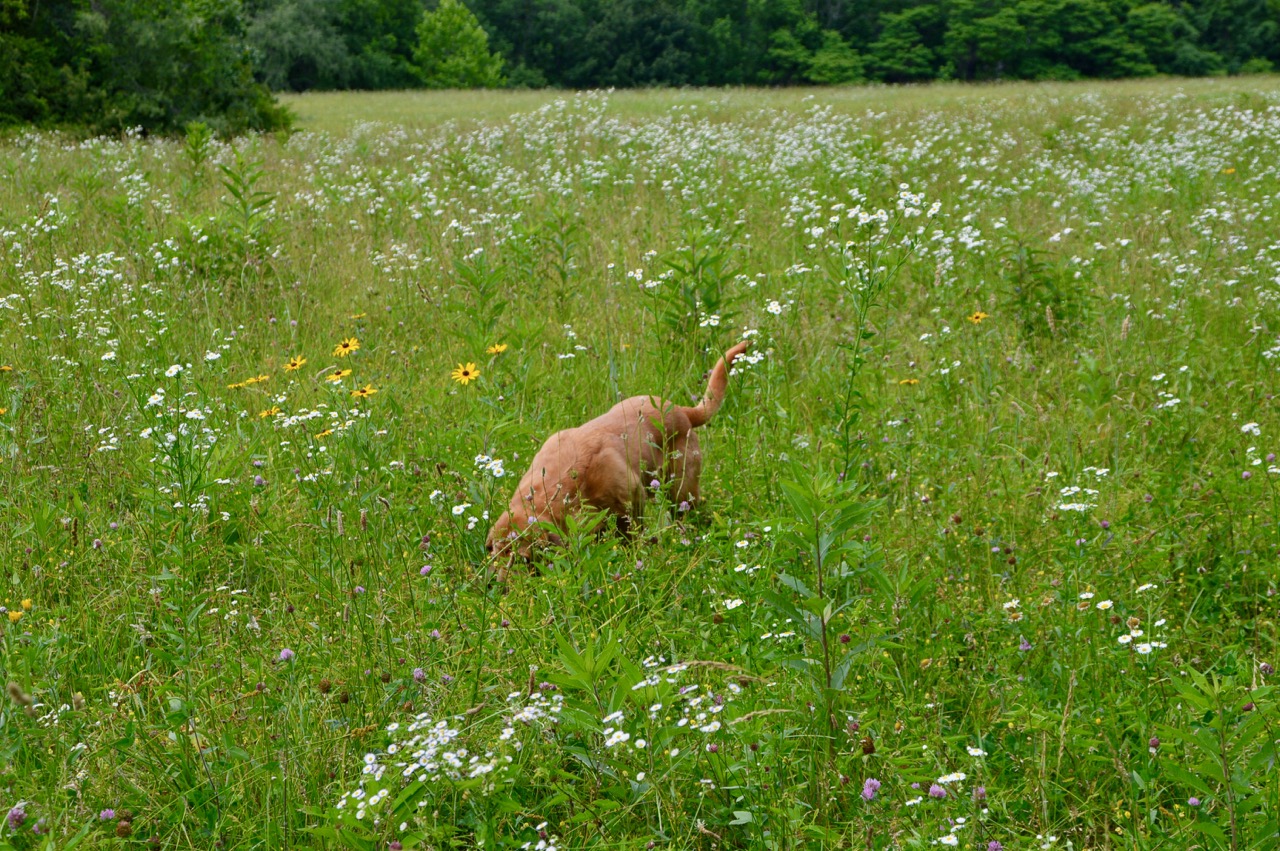 Stella glides in home. That grass looks too short ... I'm going to let the yard grow back to 4" tall before I mow again. 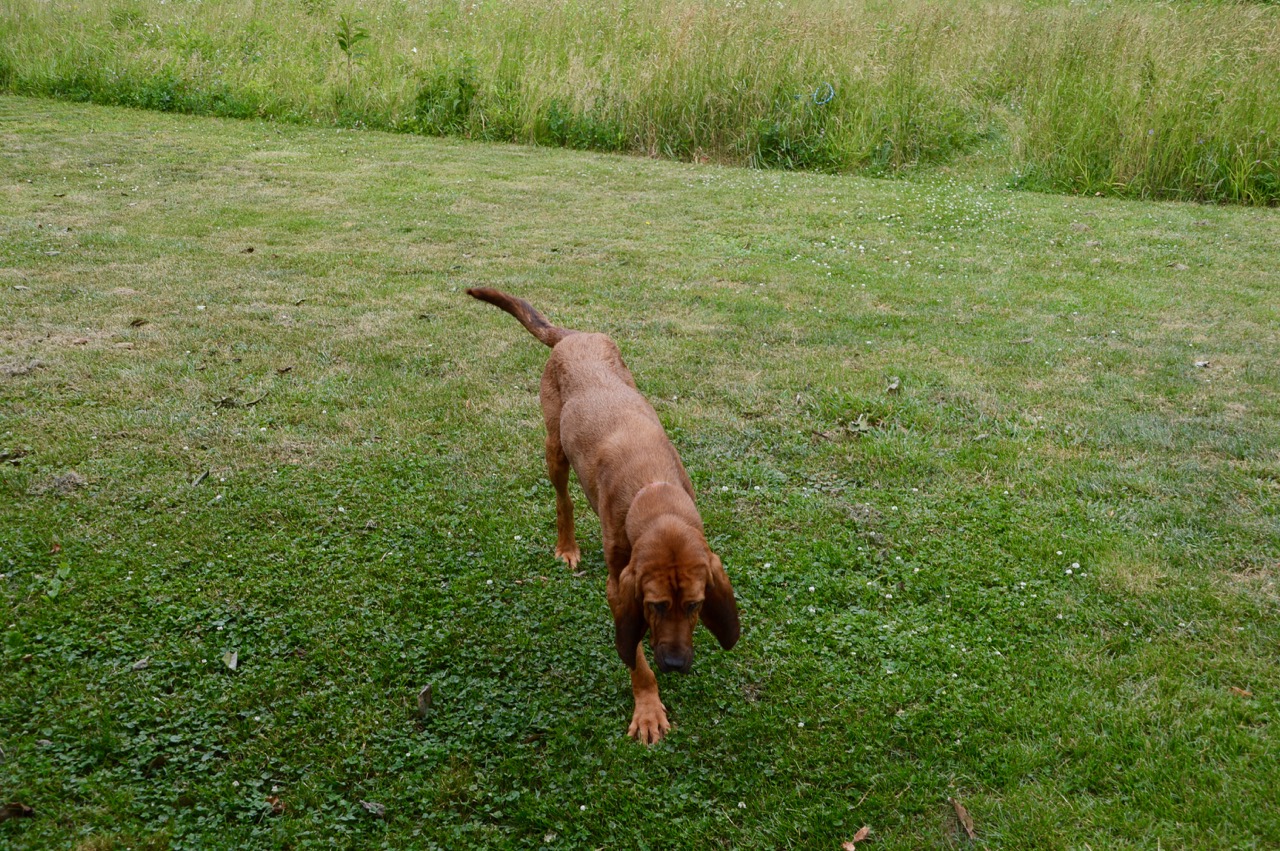 While sleeping the area must have been hit with some sort of electrical energy. Blogger was acting buggy trying to load pictures into the blog while other websites were loading instantly. I had to unplug and plug my card reader usb back in to get it to work. Some settings had be changed back to where I had them and a background picture on one of my monitor had disappeared.

Same routine as last night ... I'll have some dinner then turn on the Reds again again at 7:05pm. Last night I witnessed MLB history was a reserve player off the bench started a game, hit 4 home runs and 10 RBI's to set an all-time Reds record and a MLB record for a 5th hit, 4 HRs and 10 RBIs. On Sunday that same player came to the plate in a 0-19 slump and ended up striking out.

The day was too quiet today.

Another great day of retirement here in 'the tropics' of Southern Indiana.
at June 07, 2017