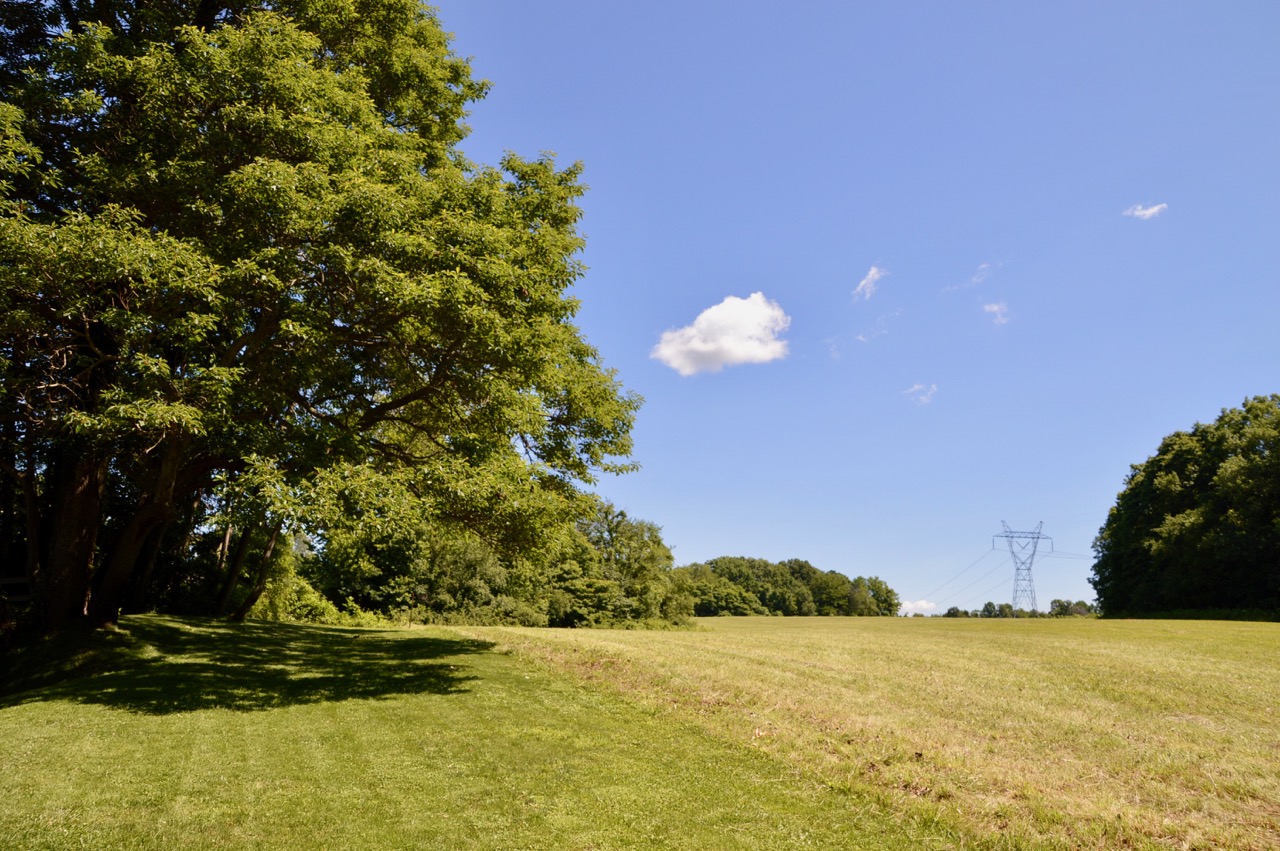 With weather like this every day it's hard to stay inside. Sadie and Stella felt the same way although for some reason Heidi is back in her mid-winter hibernation mode. High temps in the 70's make it perfect weather. 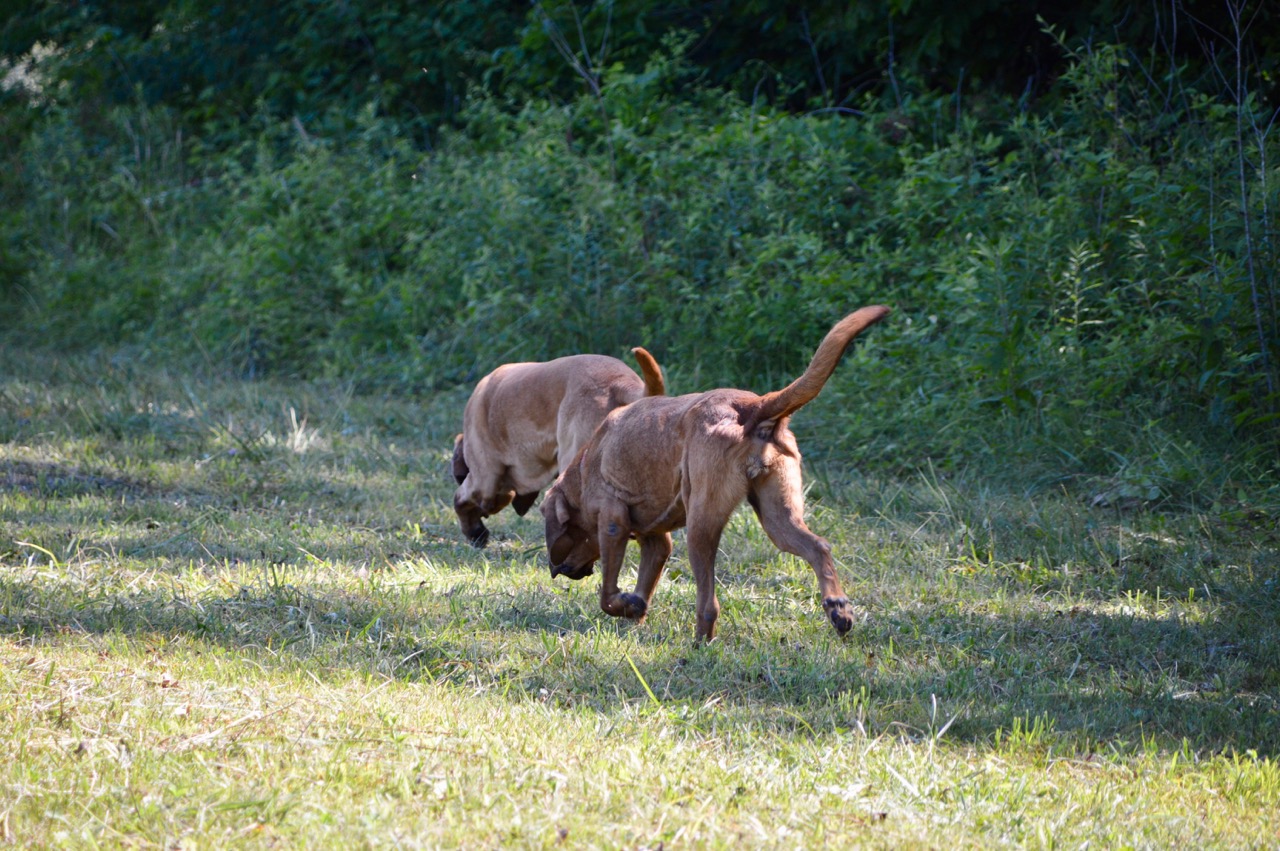 For our mid-day walk I had barely made it to the yard and saw Sadie and Stella both running toward the back of the field direction in back of the house. I have no idea what they had picked up but their noses were to the ground and they were off at a fast pace.

I continued to follow the path walking the same pace I always do, knowing that both of them would be within view. 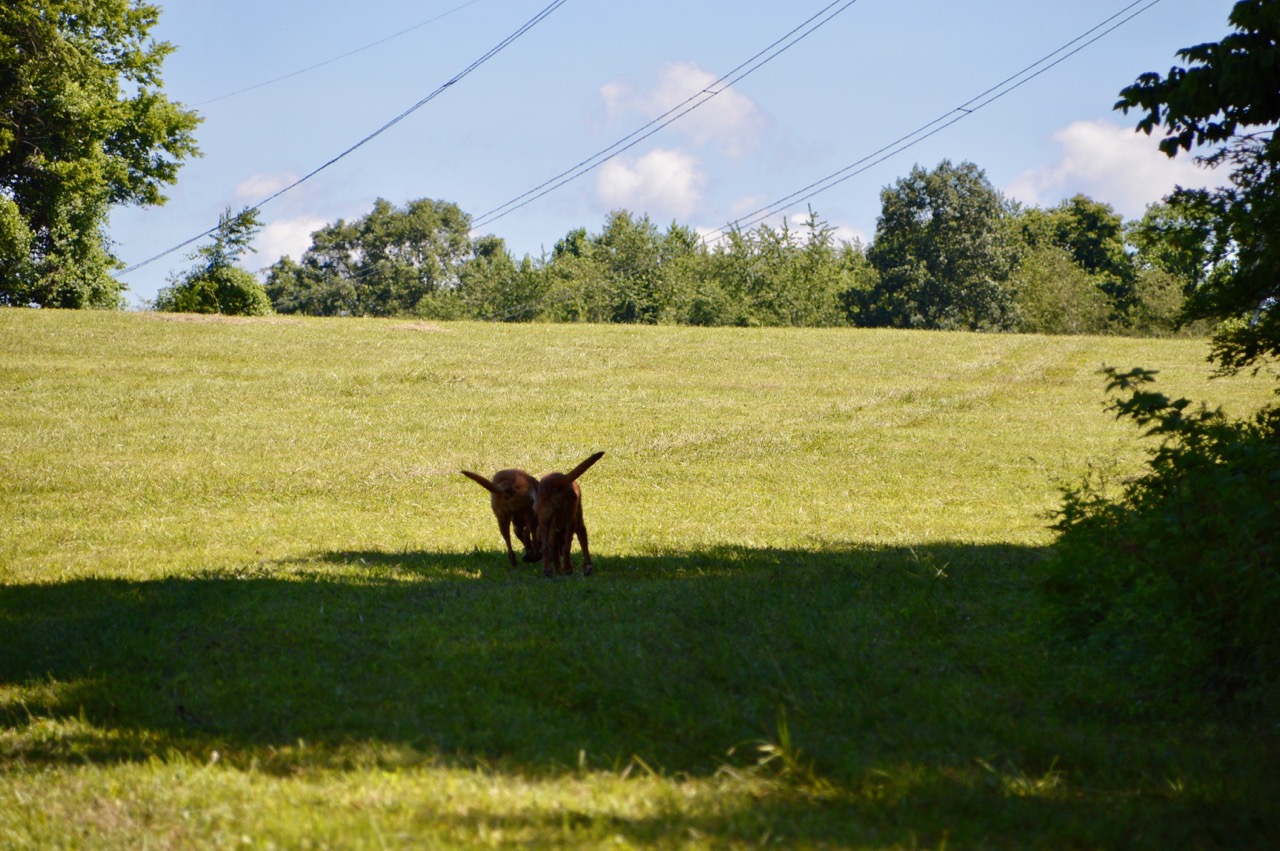 I was not even close to the first corner and they were already in the middle of the field. It wasn't until Sadie stopped to look back in my direction that they slowed their pace. I expected them to head over the top of the hill and go toward the woods. 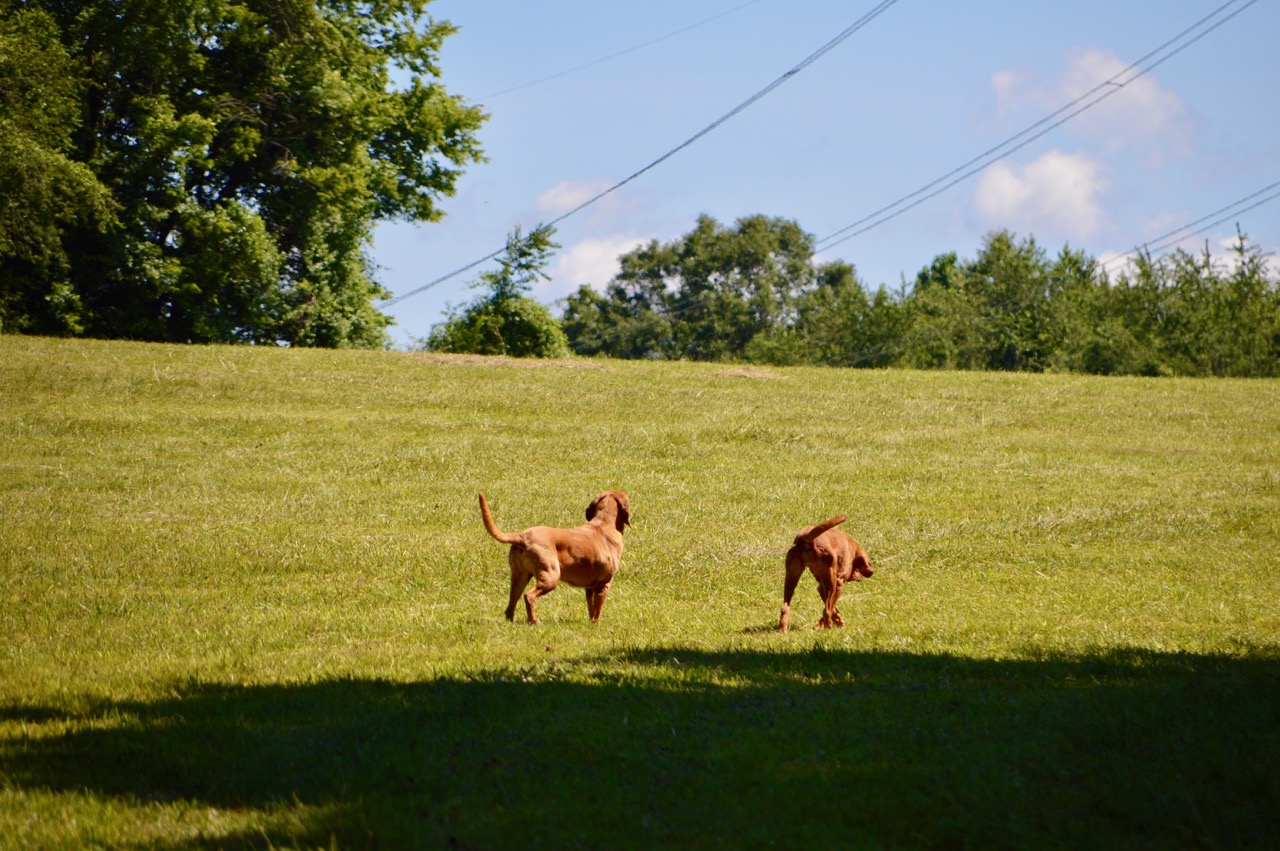 They were not chasing deer nor birds, just jogging further and further away from me. I don't recall this ever happening when they were not involved chasing deer. I guess they really do like the field cut. I still had not made it to the first turn. 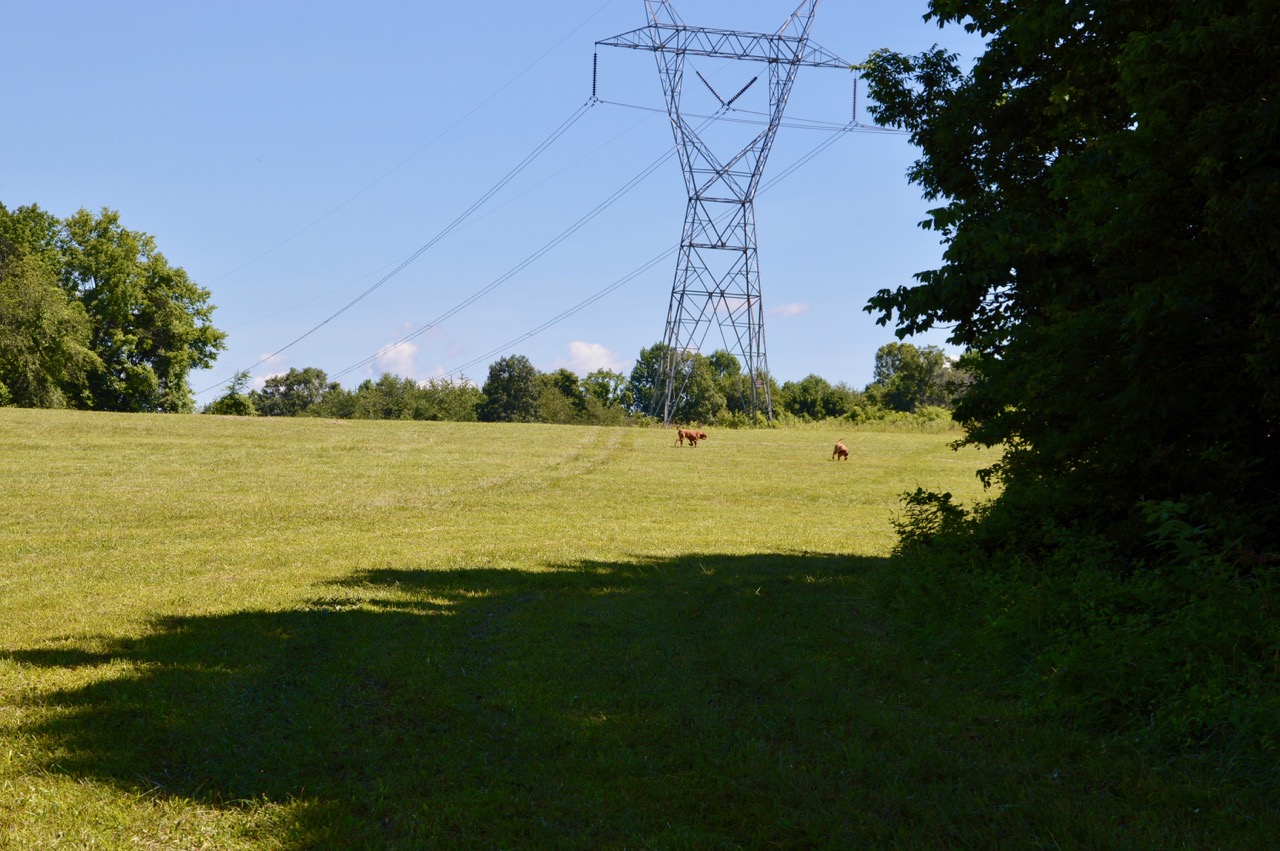 By the direction Stella was heading along the back edge of the field I thought she was well on her way into the 'no fly zone' but I wasn't going to start running after her yet. I continued with my slow pace while keeping an eye on them to see what they were going to do. 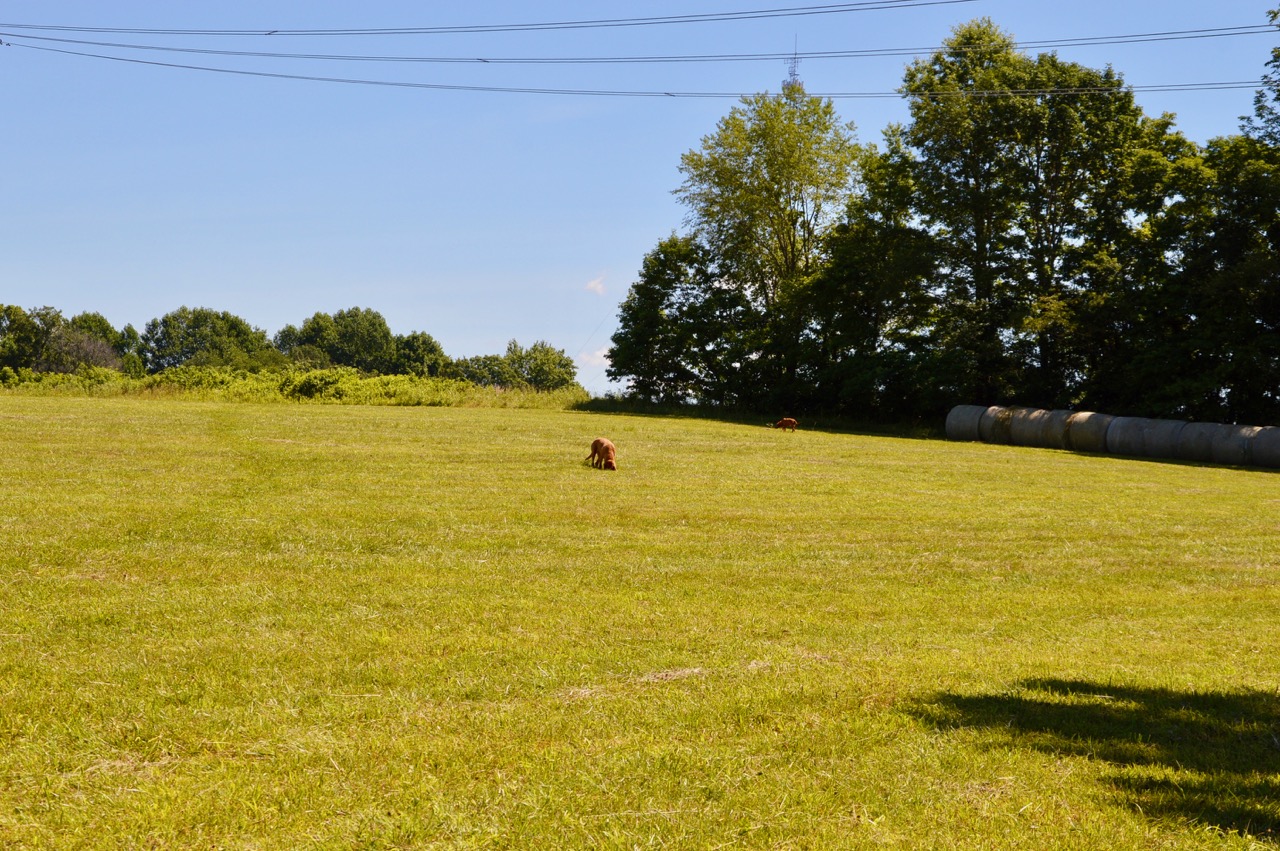 Even with this much sunshine, it didn't feel hot. It's hard to believe it's almost July and we are having highs in the 70's for weather. 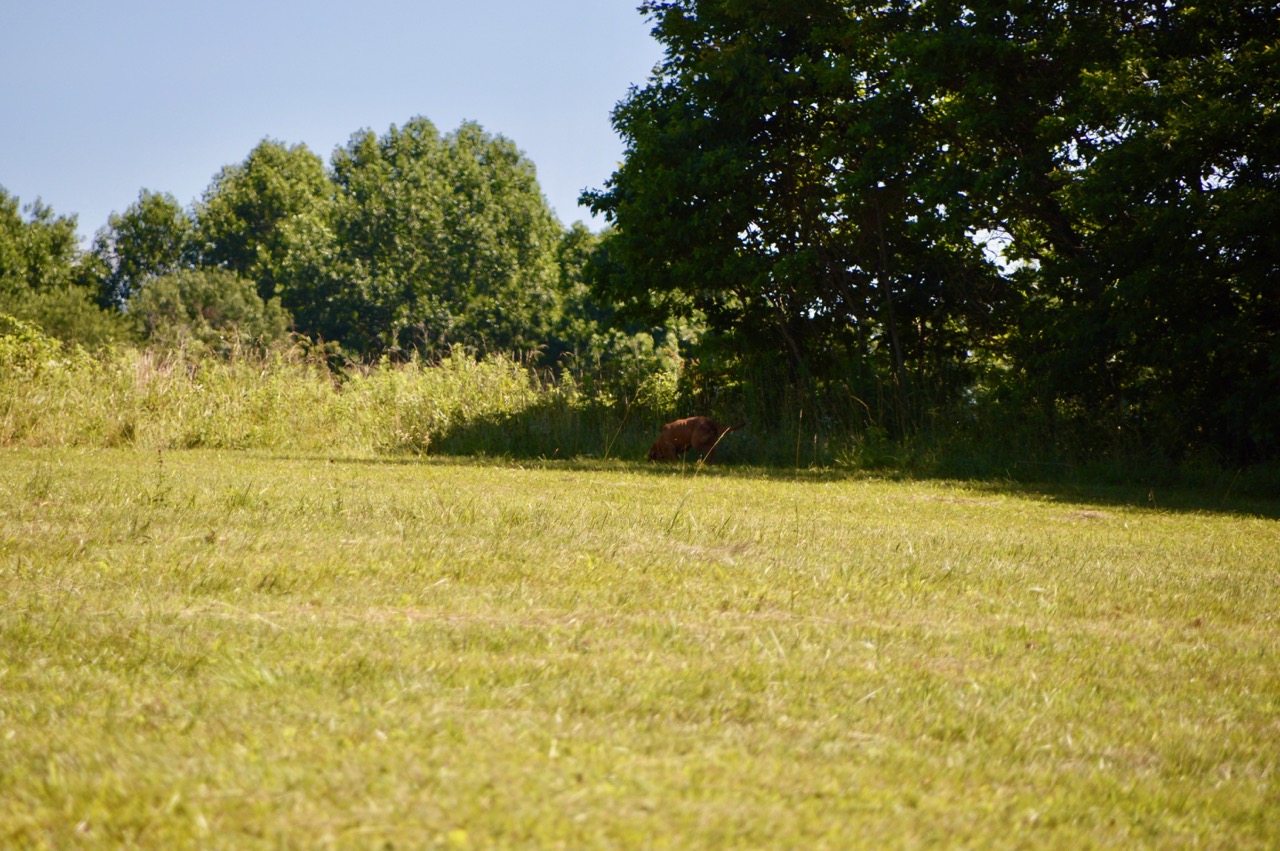 I cannot figure out why they were in such a hurry to get to this area of the field. They sniffed around a lot but didn't look like they had found any 'natural protein' to eat. I wondered how long they would stay out here if I didn't get them walking back to the house with me. 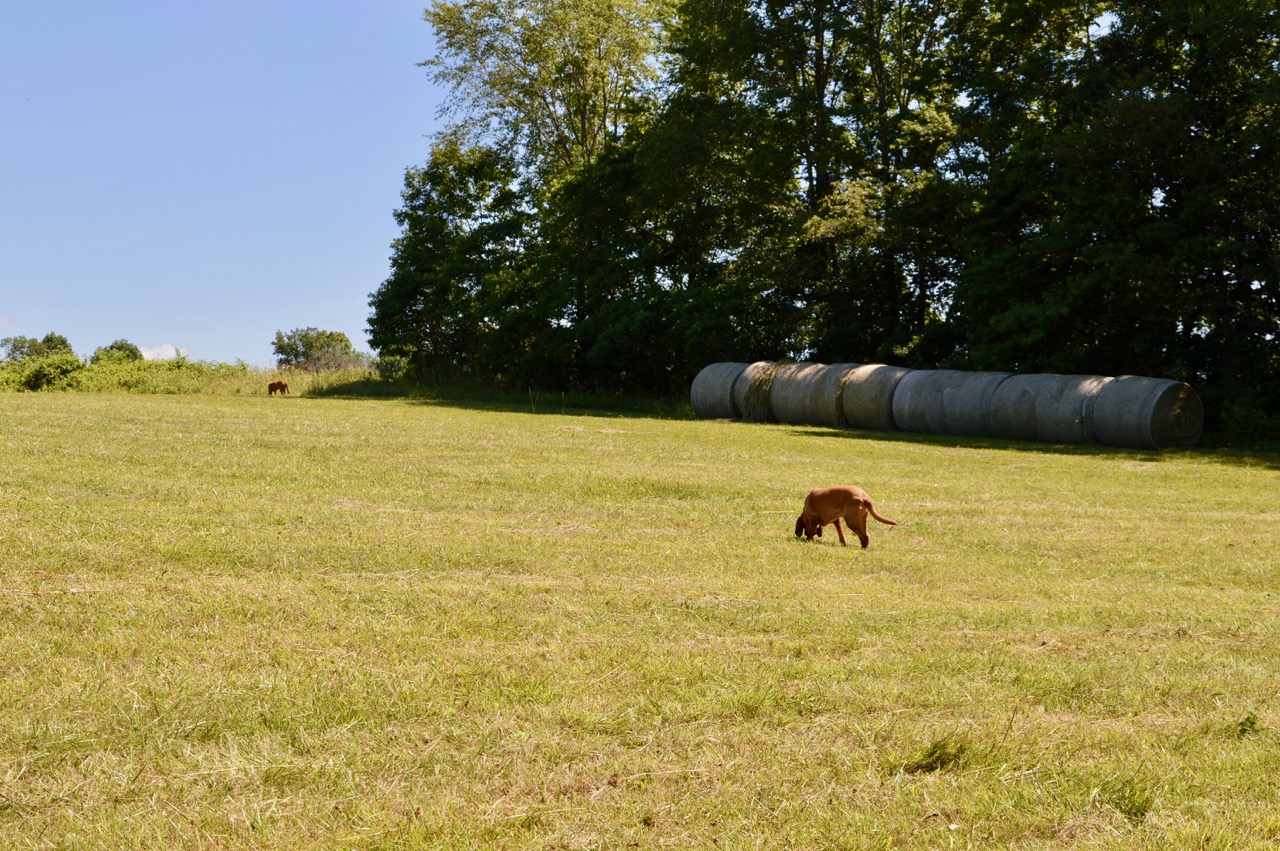 I wanted to take a picture of the tightly rolled hay but Sadie had other ideas. Evidently something she liked was wrapped up inside the roll. 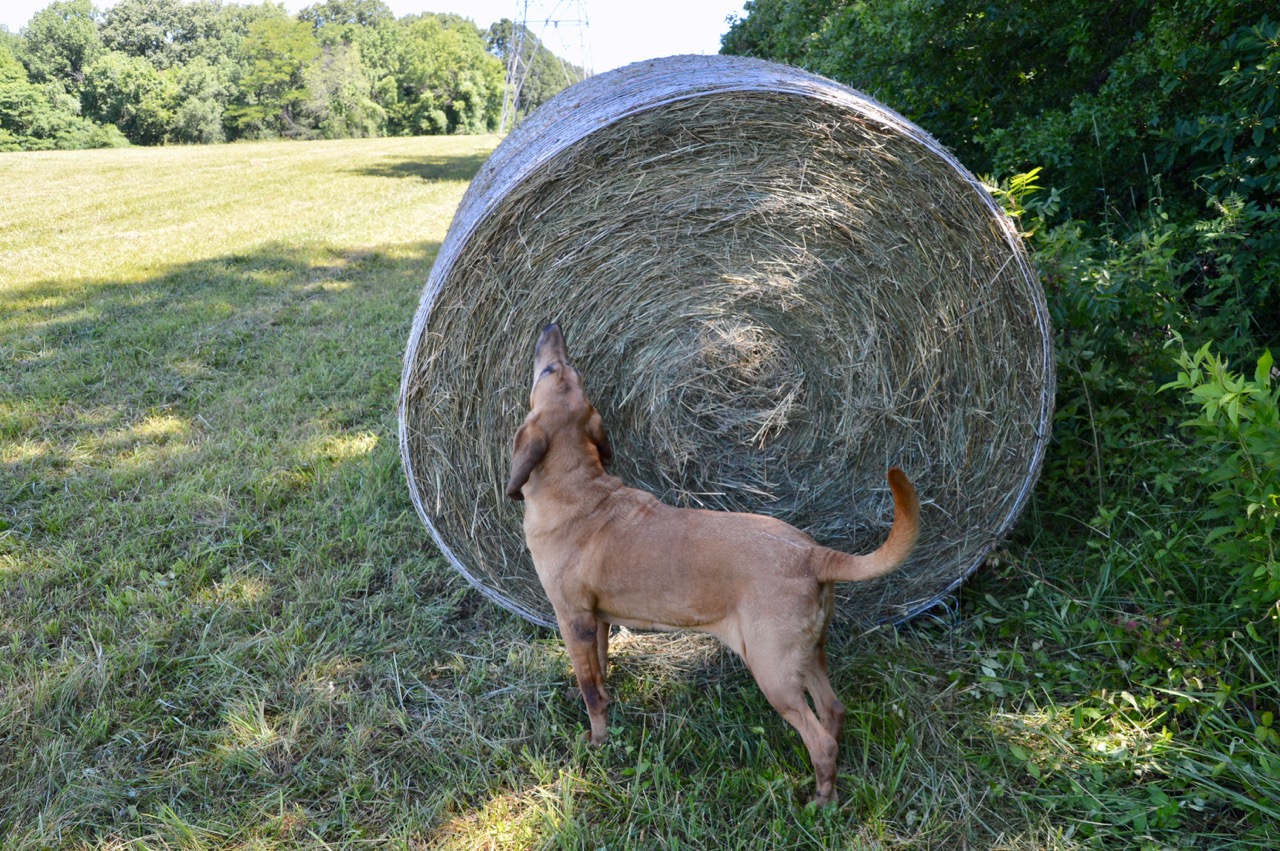 A single feather out in the middle of nowhere. 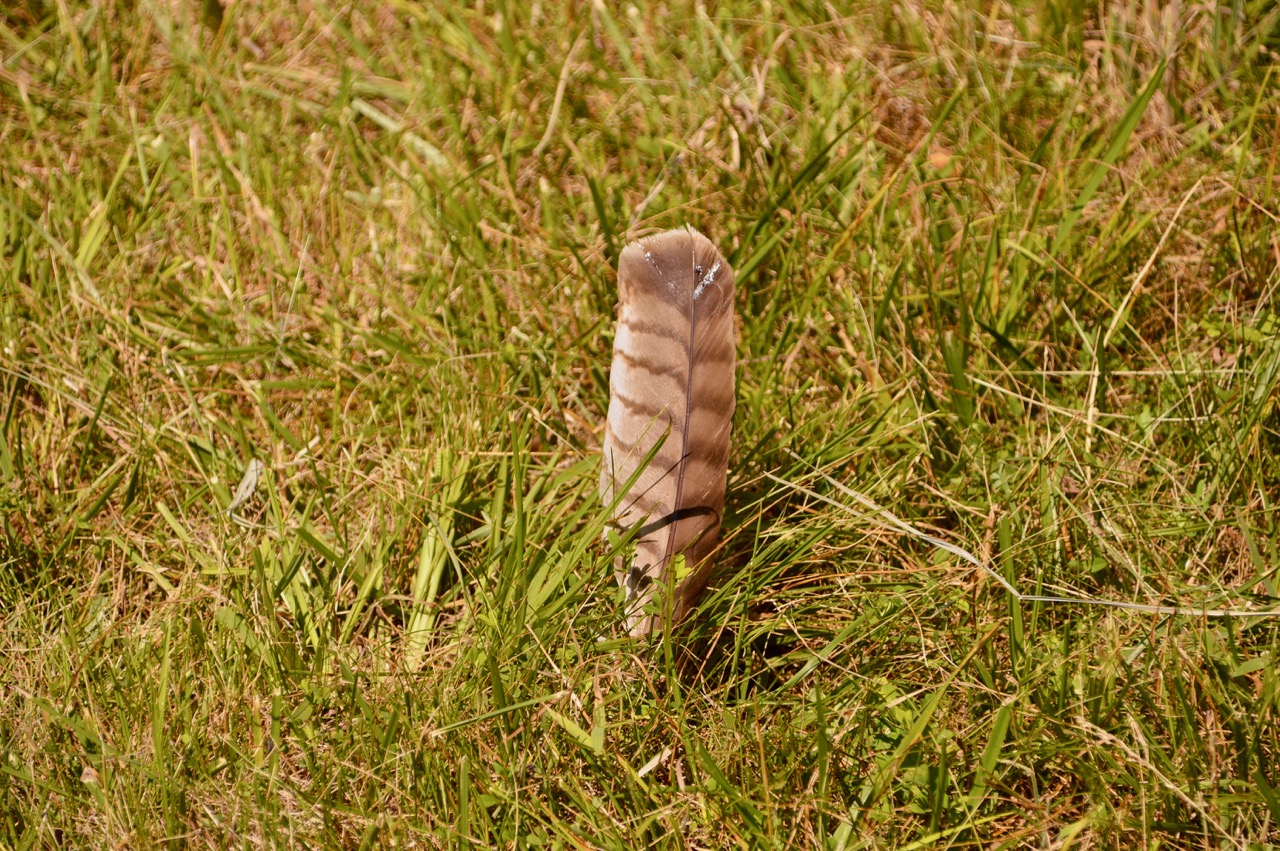 After checking the mail, grabbing some water to drink, I headed back outside for an afternoon of reading. Sadie was checking to see if another walk was possible. It had been about 30 minutes since we returned from the mid-day walk. 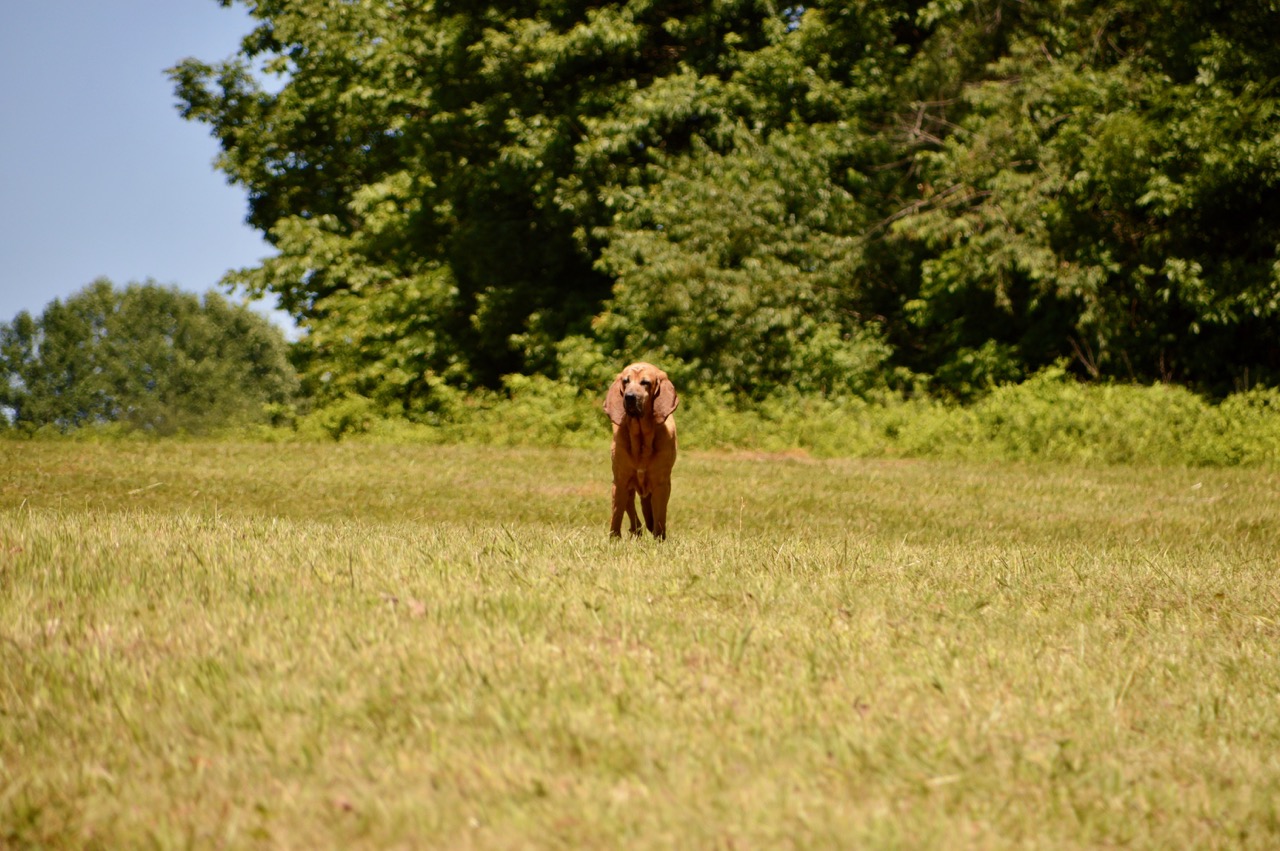 Once she saw I was not going to get out of my chair to go on another walk, she decided to sneak up on me as if I couldn't see her. 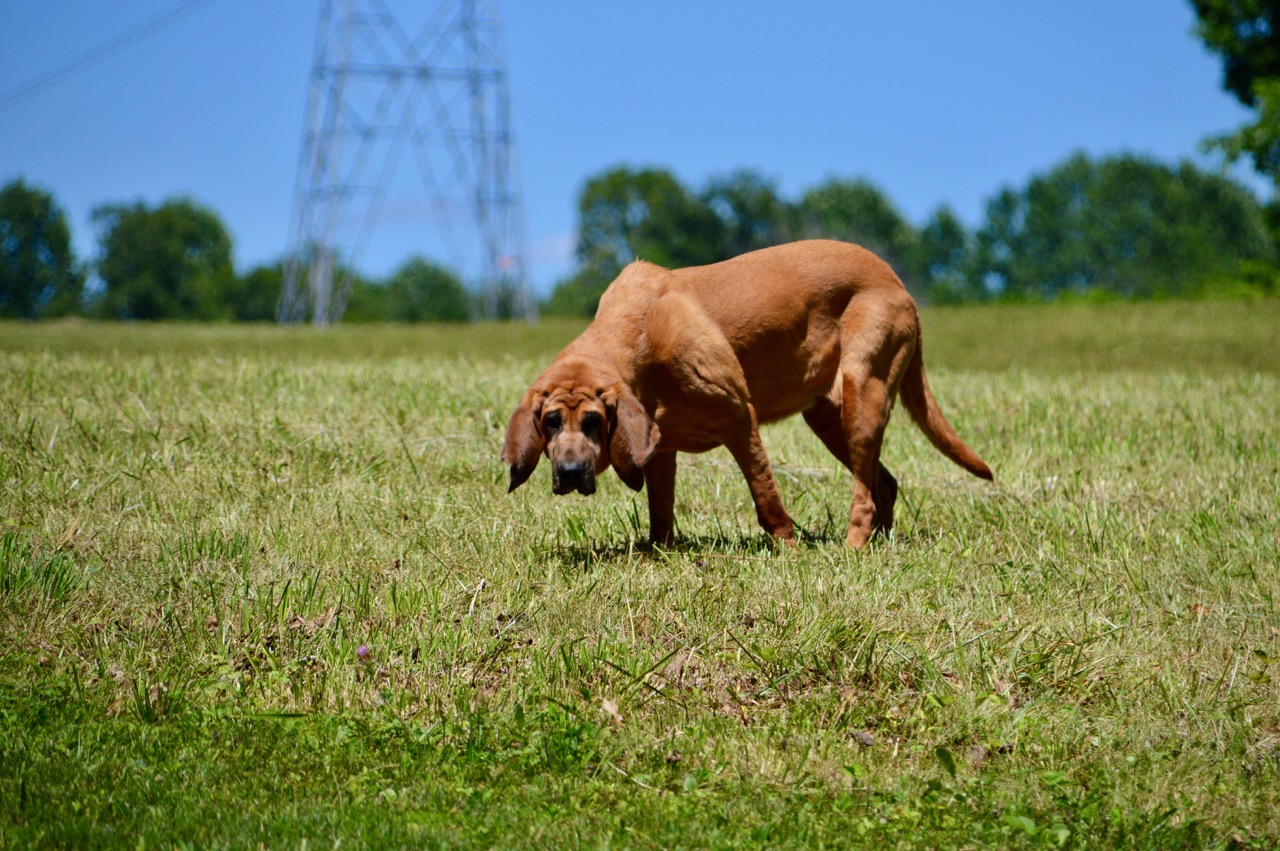 Stella got to the point of indecision ... whether to answer my call and head back to the house or turn and make a run for it back out into the far field. After a lot of thinking, she decided it was best to return to the house. 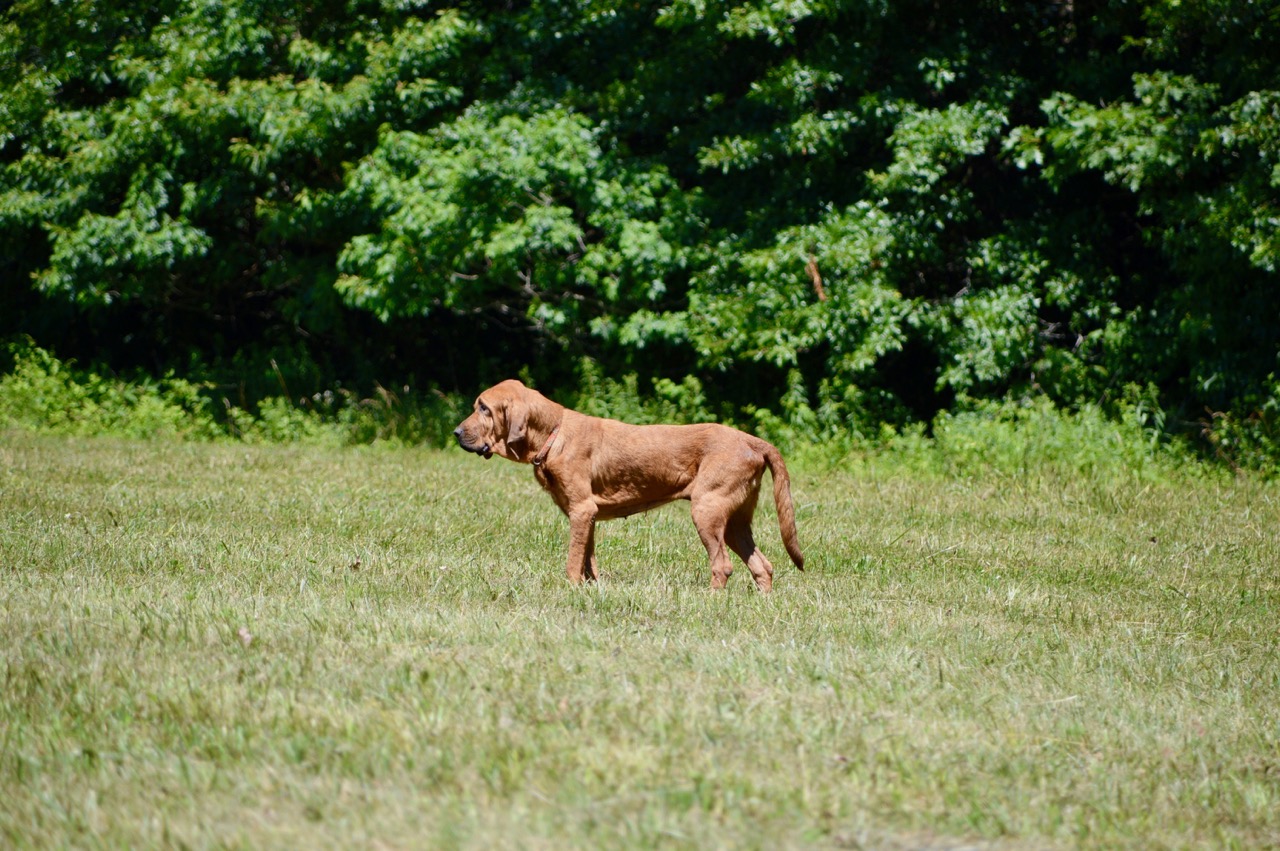 It was another great day here in 'the tropics' of Southern Indiana.
at June 28, 2017
Email ThisBlogThis!Share to TwitterShare to FacebookShare to Pinterest
Labels: Books, Enjoying Afternoon Sun, Hounds Energized