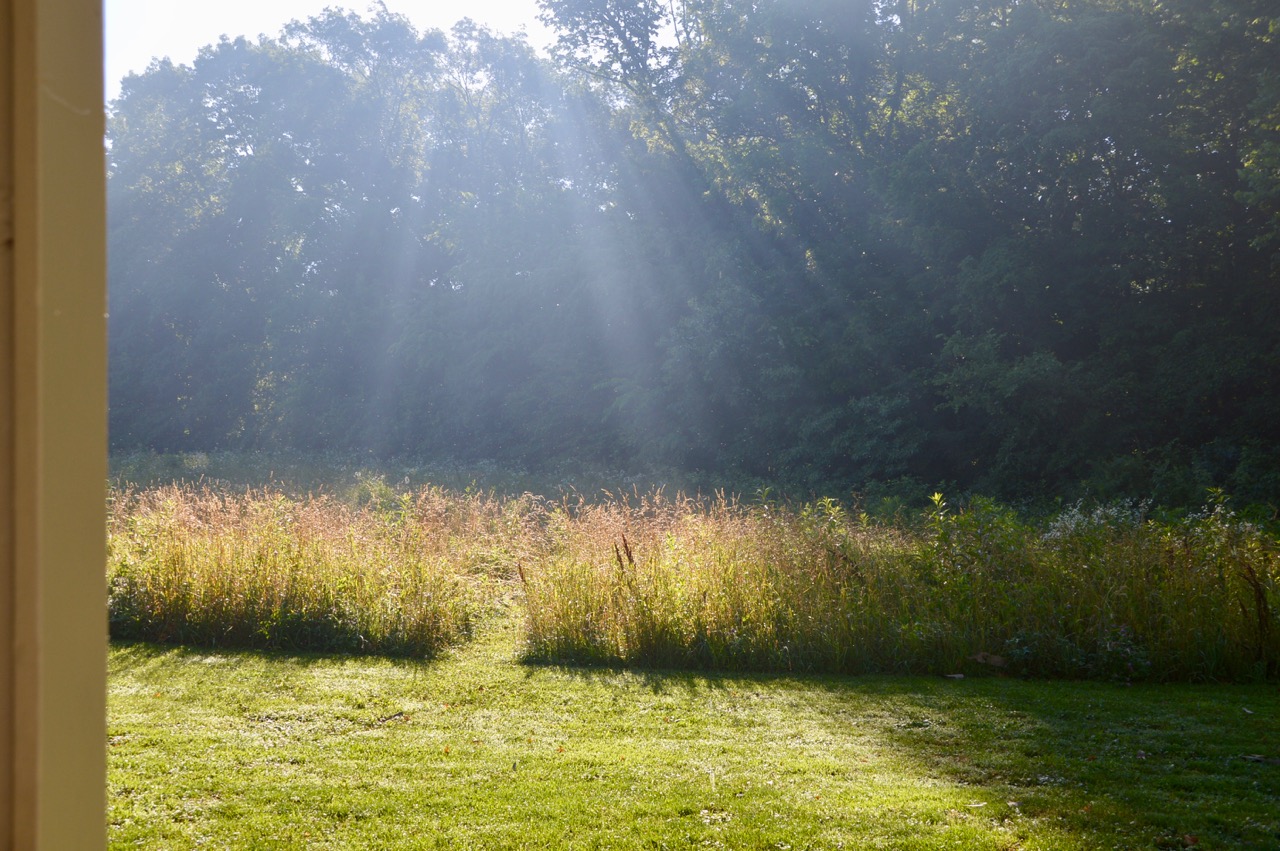 I'm not sure what it is but with today being a little halfway over, all of us are on very low energy with siestas even before 1pm. Maybe it was all the activity yesterday on Sadie's birthday that caught up with us. It's going to be very hard to create any kind of suspense and drama in this post. 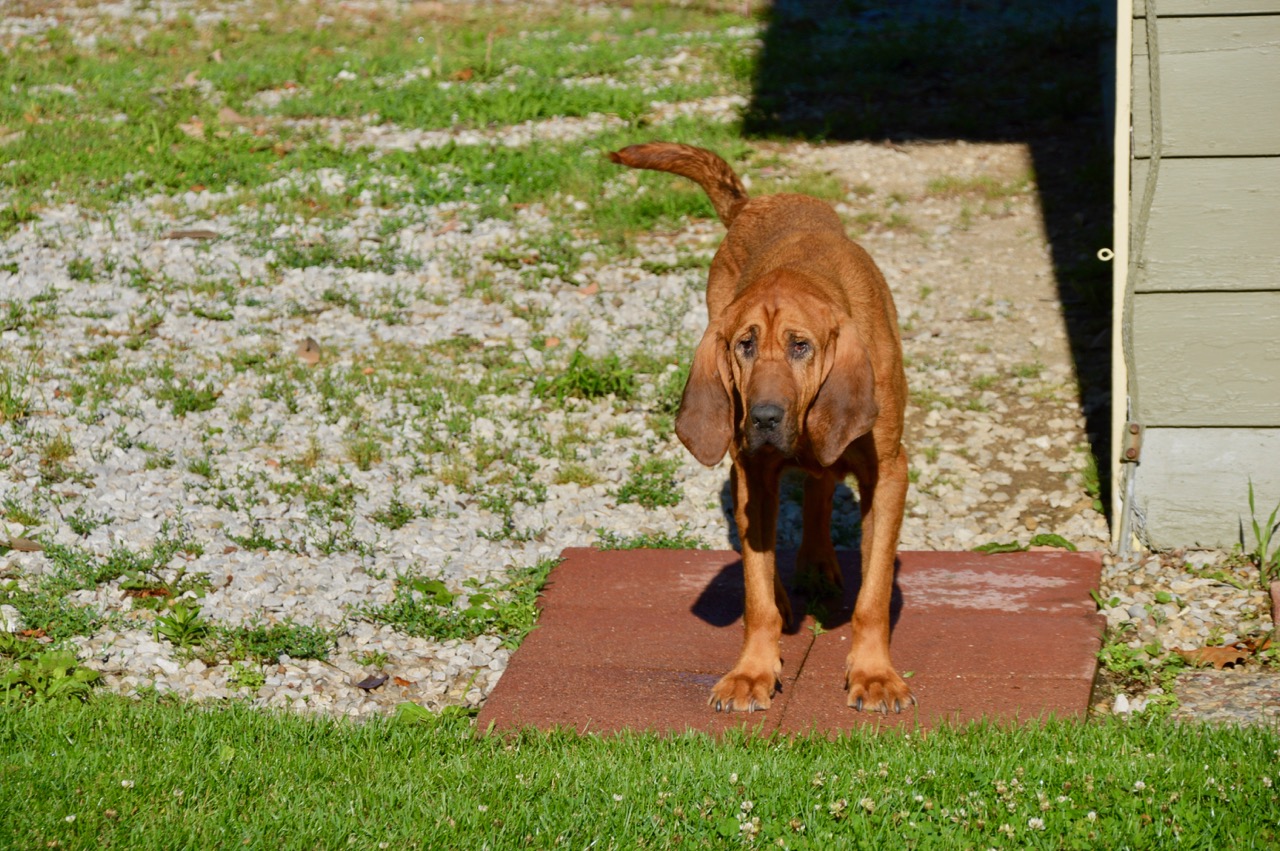 The first walk of the day started a little after 8am. Once again for the 3rd day in a row Stella stood on "Winston's Patio" and contemplated if she was going or not. I was pretty sure by the way she looked that she would stay behind this morning. 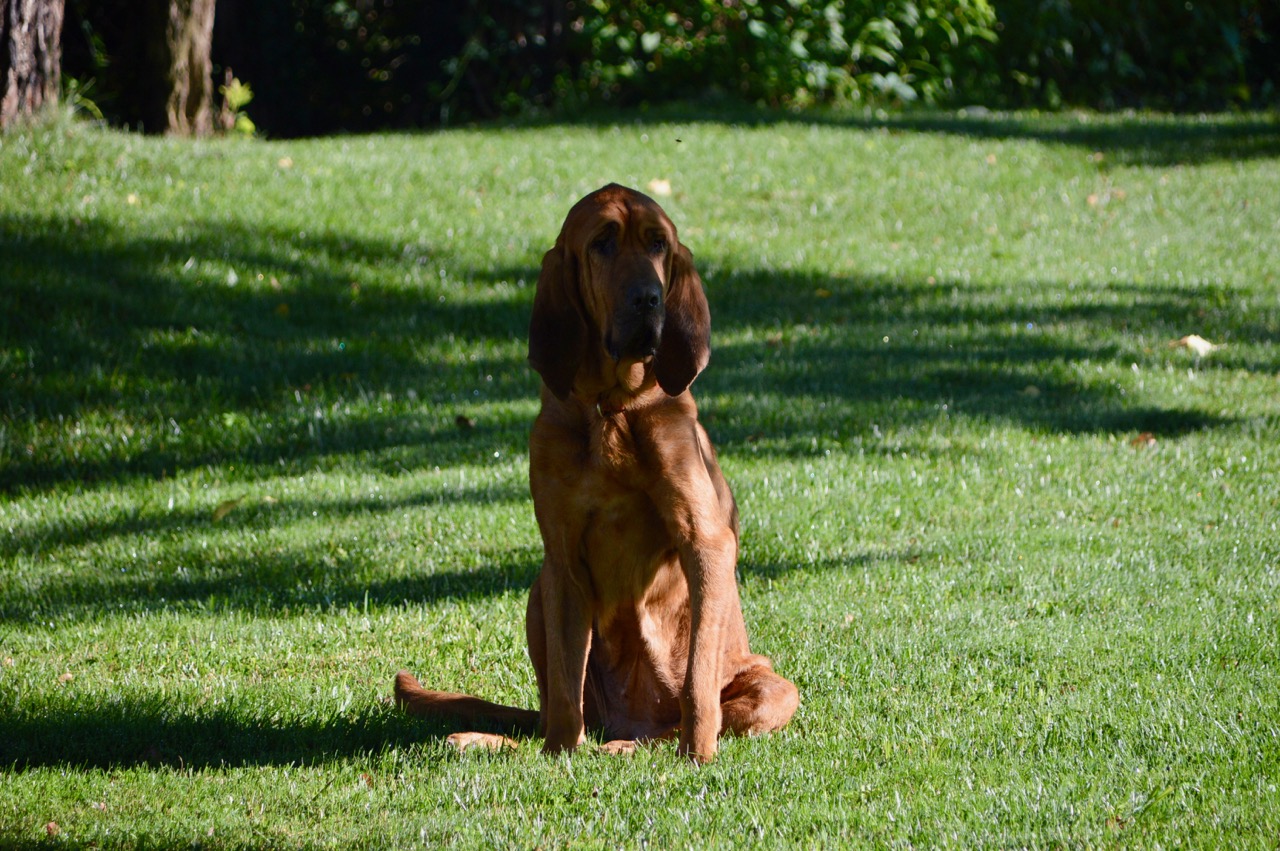 By following her new morning routine, she walked along the side of the house before turning up under the shade, where normally she has been finding her spot to pee ... but this morning she had to do more thinking about her plans for today. 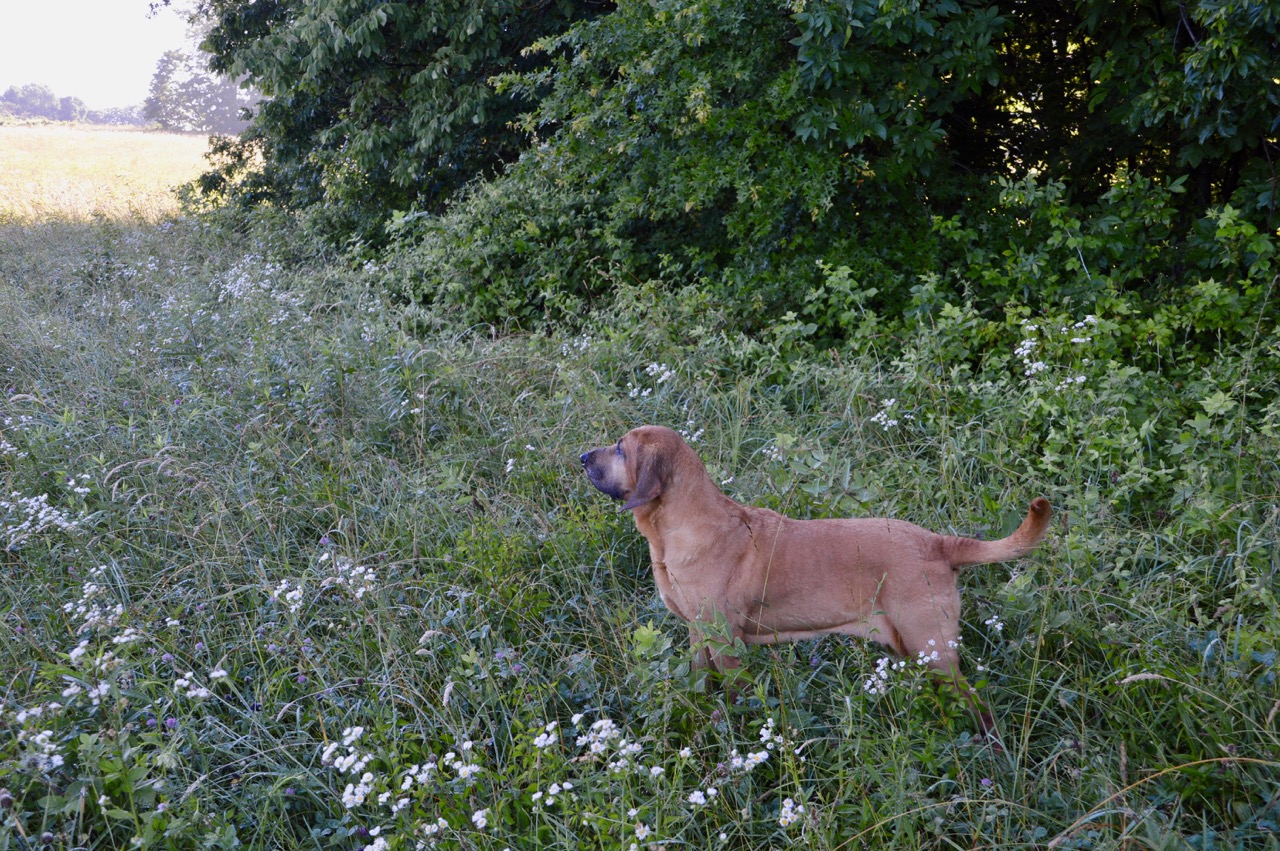 By the time Sadie and I were almost on the first turn, I was pretty sure that Stella would stay behind and we would catch her on the way back over by the neighbor's woods. 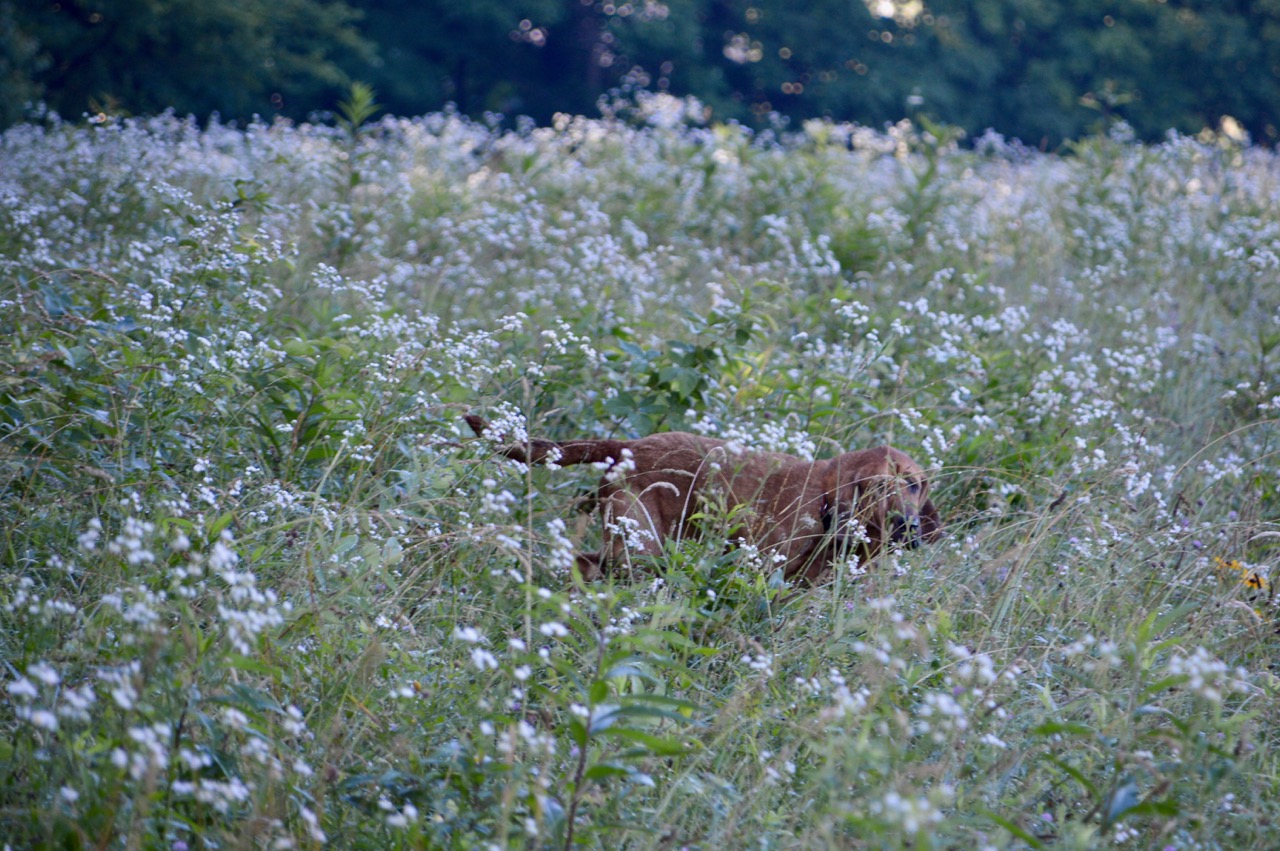 It was quite a shock as I turned to do a final check on her before I made the first turn around the corner of the woods ... that I saw Stella not only coming toward us through the tall white flowers ... but she was trotting to catch up!! 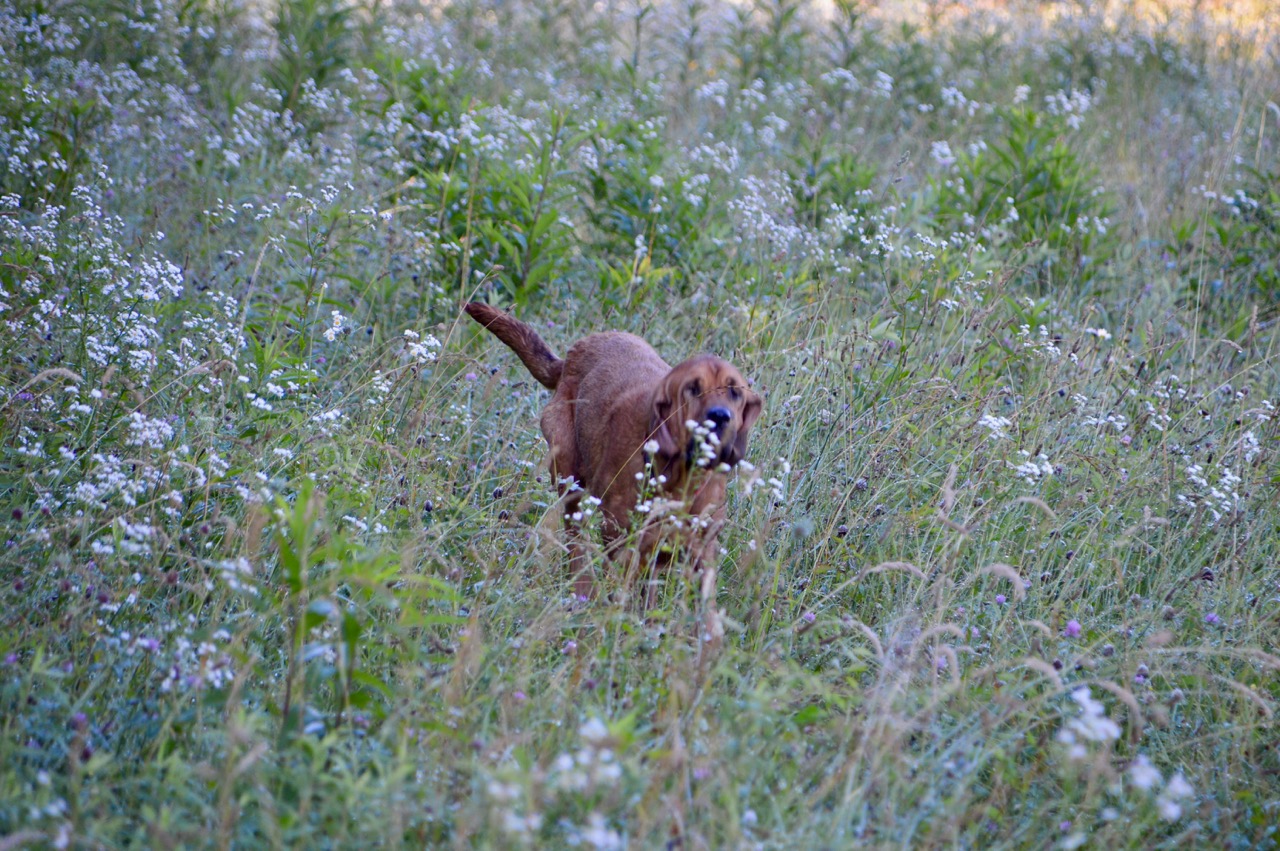 The times between her trots seem like months and may only be weeks ... anyway it was good to see just how much energy she had this morning. 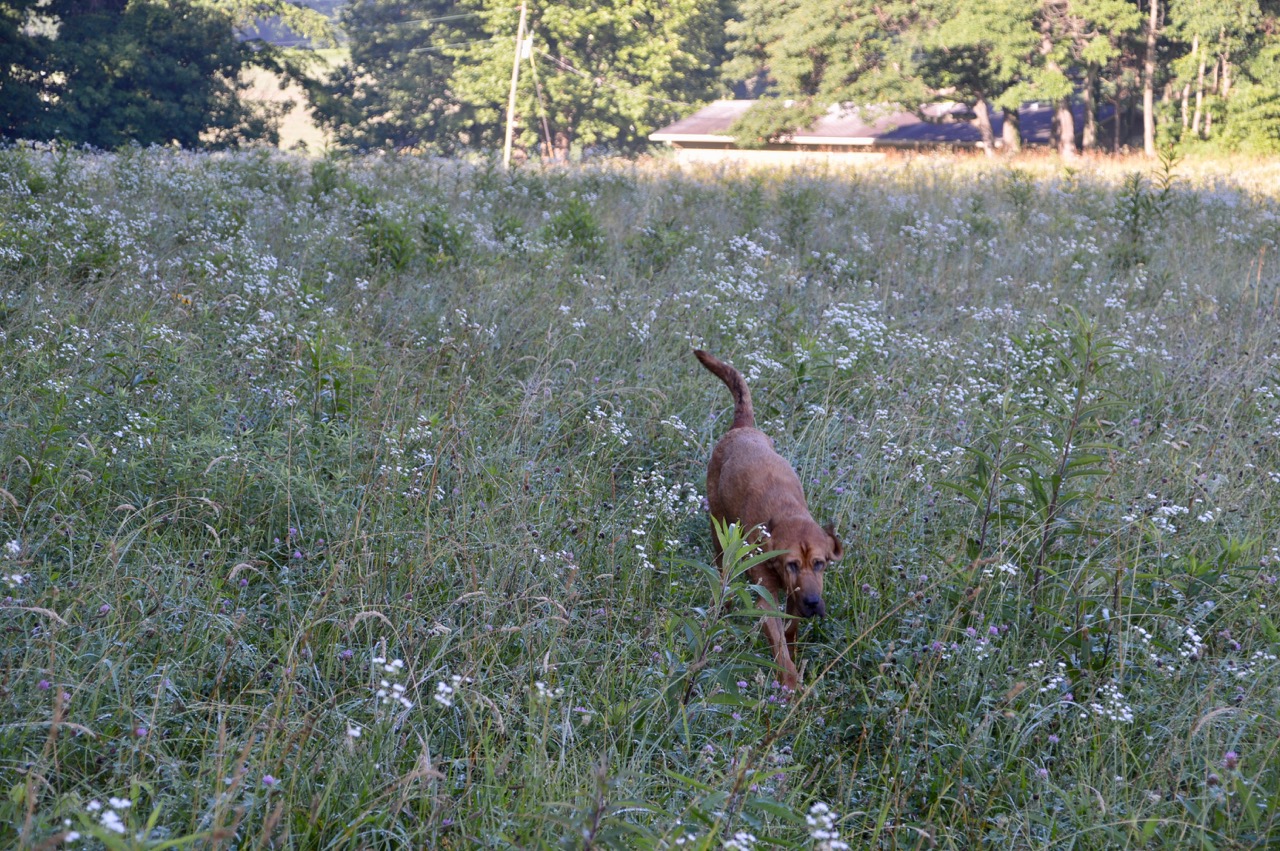 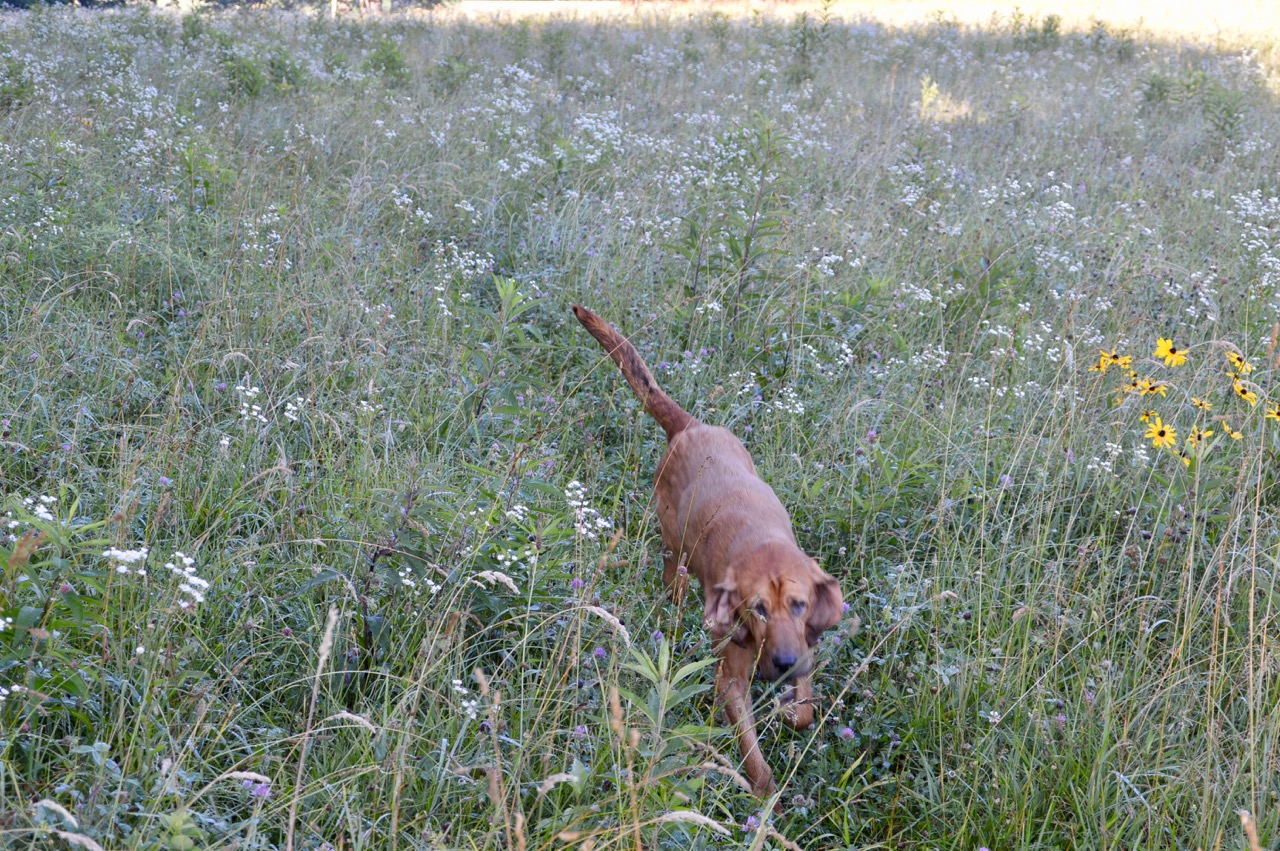 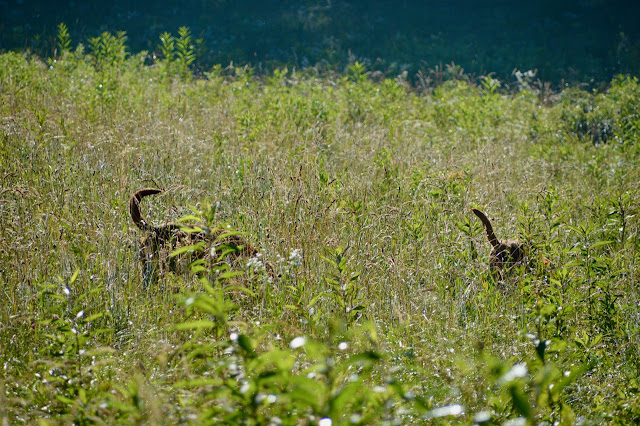 She ran as close as she could by my knee and kept on trotting to catch up with Sadie. I could already feel how hot the sun was today ... yet by 1:30pm the AC had not automatically turned on and the house was still cool from last night. 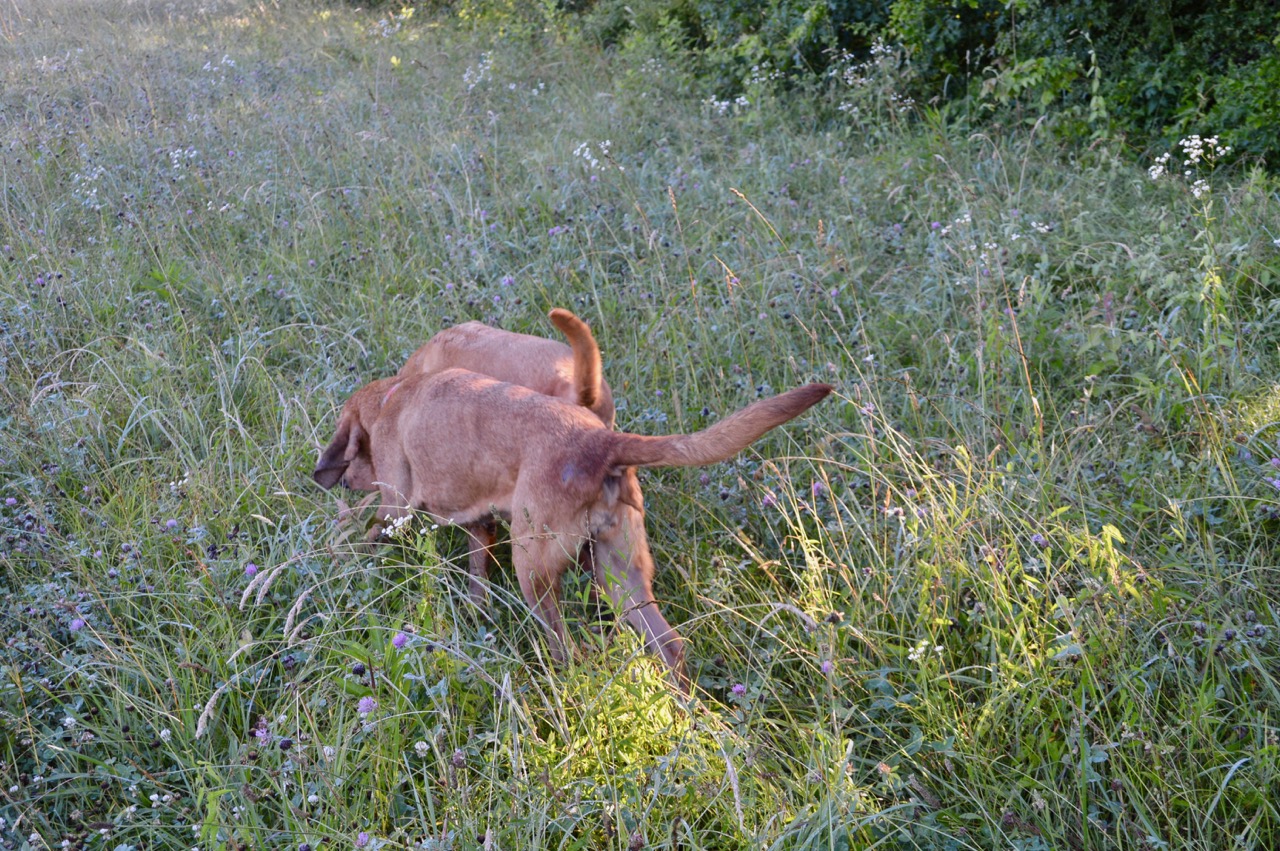 With a surprising rain last night around 1am, plus the normal heavy morning dew, the field was really wet ... I could see a lot of new worn paths from deer moving in the pre-dawn hours. The hounds reacted as if all the scents were brand new. 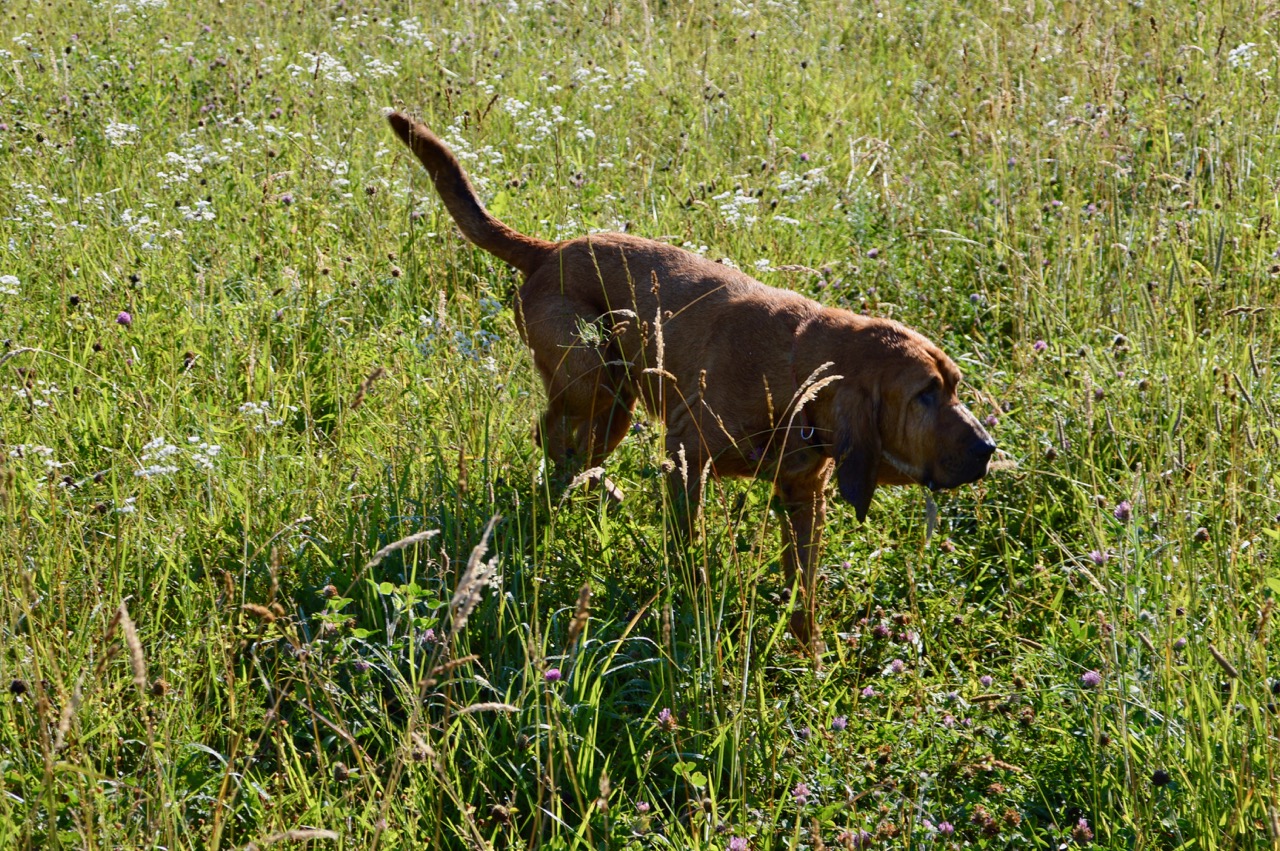 Stella tried a couple of times to sneak away and head north. Each time I yelled "over here" she would trot in our direction. I guess she is feeling better and is just trying to test me to see if I am paying attention. 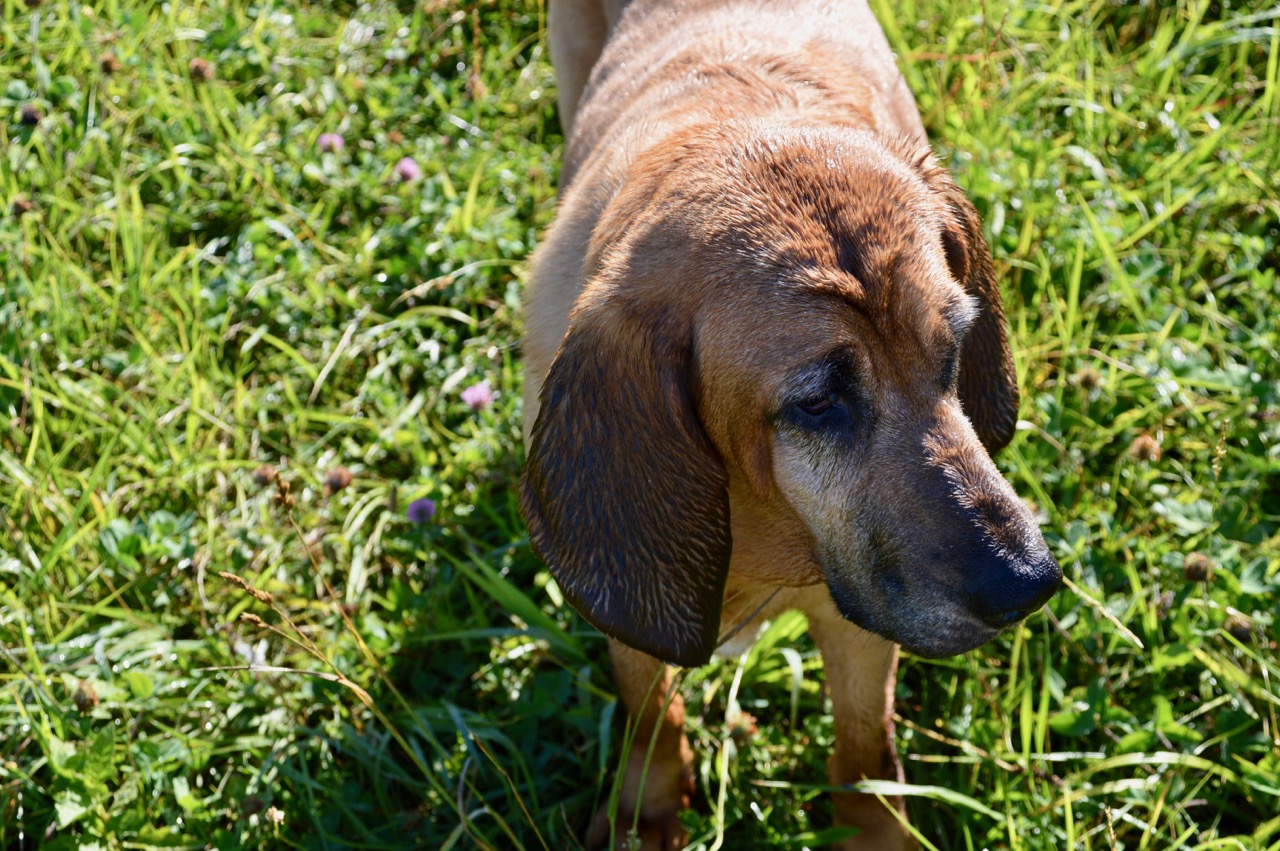 Sadie is showing us just how wet the field was this morning. She doesn't care about that either ... she loves to walk and track scent. 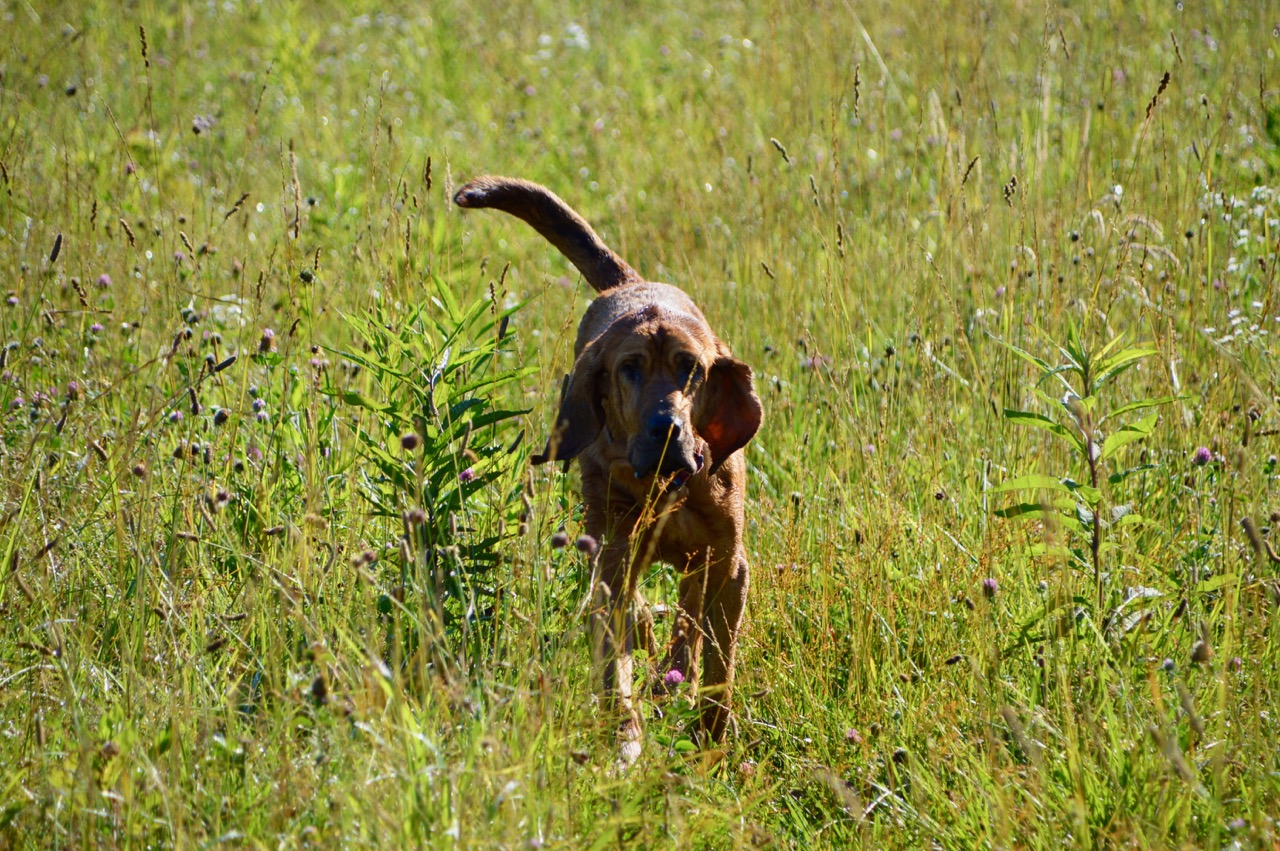 For the 3rd time during the half mile walk, Stella trotted at a pretty good pace to catch us. Hopefully this is a sign that she is on her way back to being like her old self and more energized. 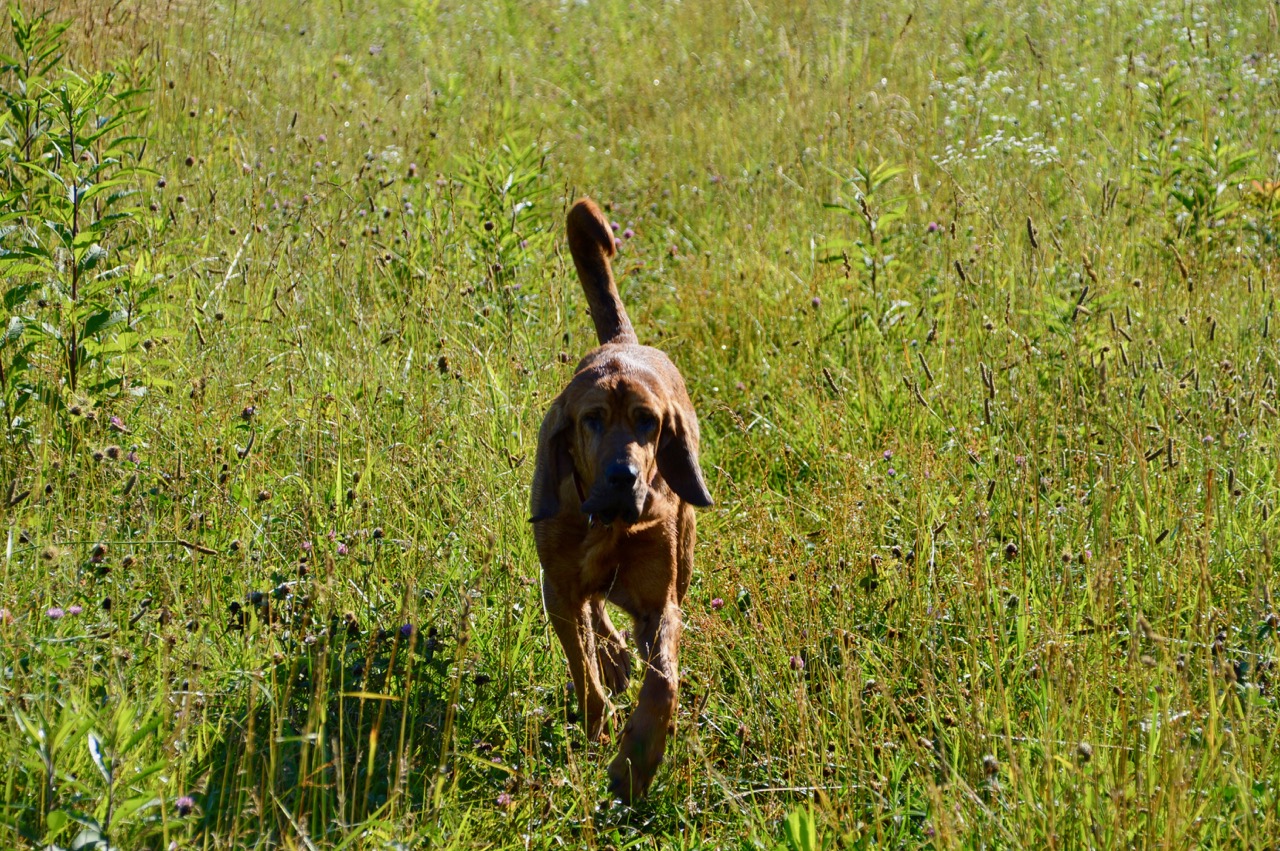 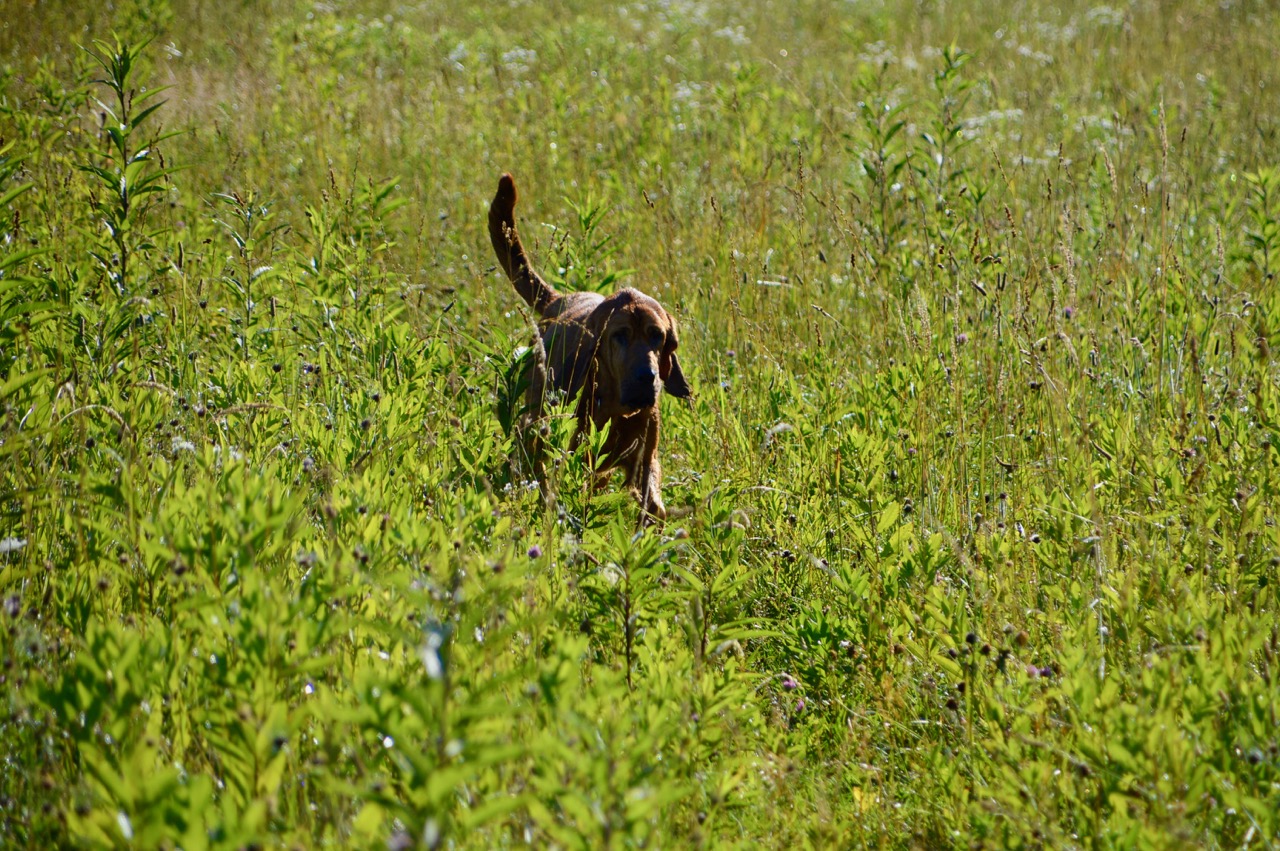 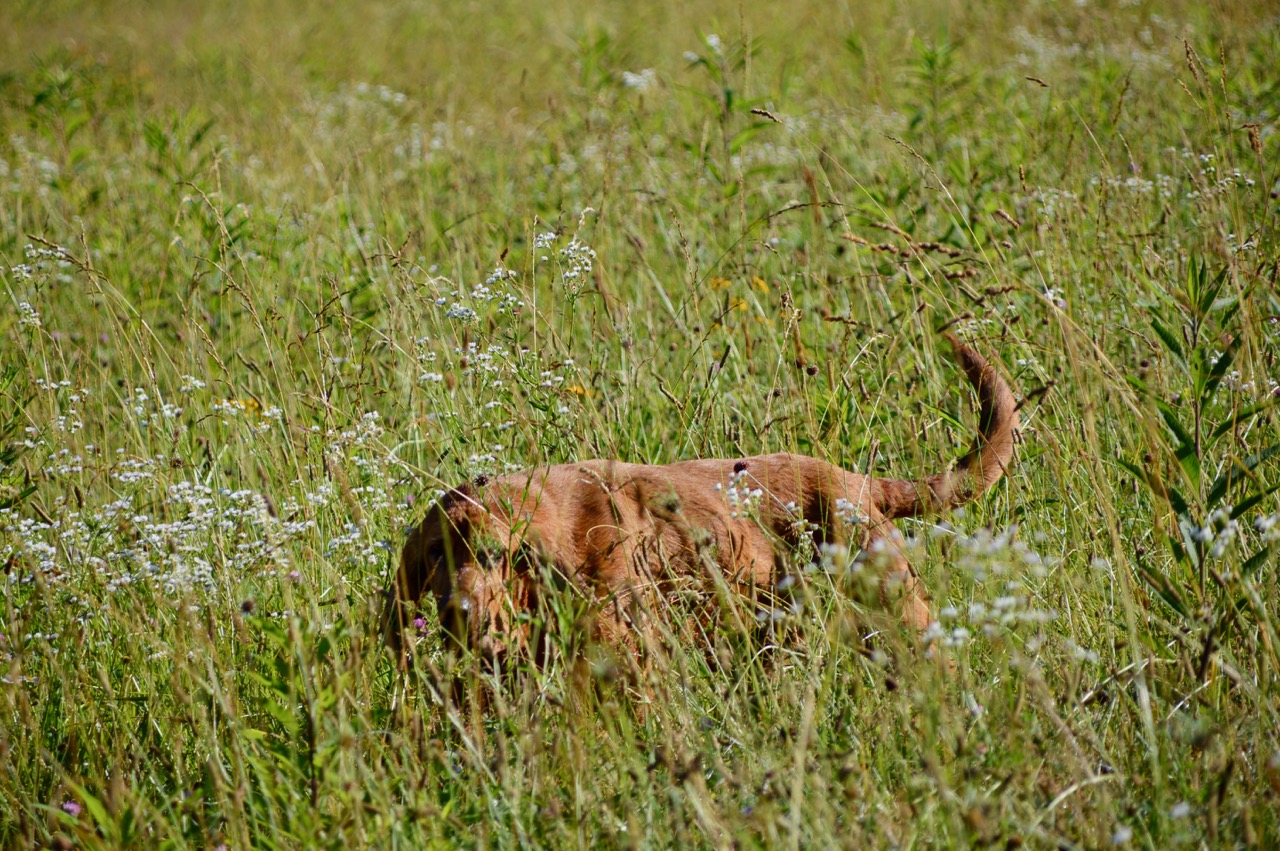 Another attempt getting caught veering toward the neighbor's woods, yet she came my direction when called. 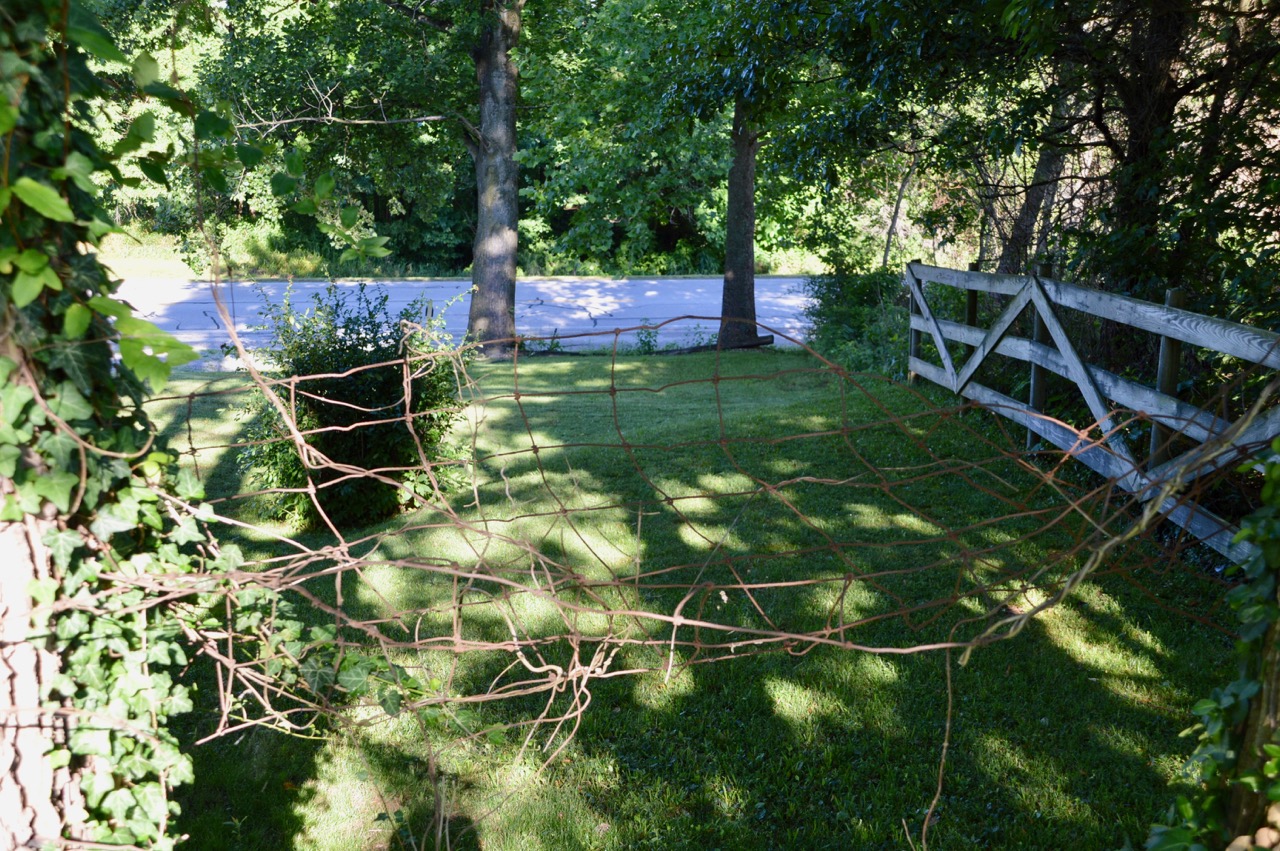 Old wire fencing from the 1940s still hangs on three different fence posts but is now embedded in the trees. I mowed the whole yard yesterday an inch higher than the last time. Not all of it needed cut but at least it's all the same height and a lot greener. 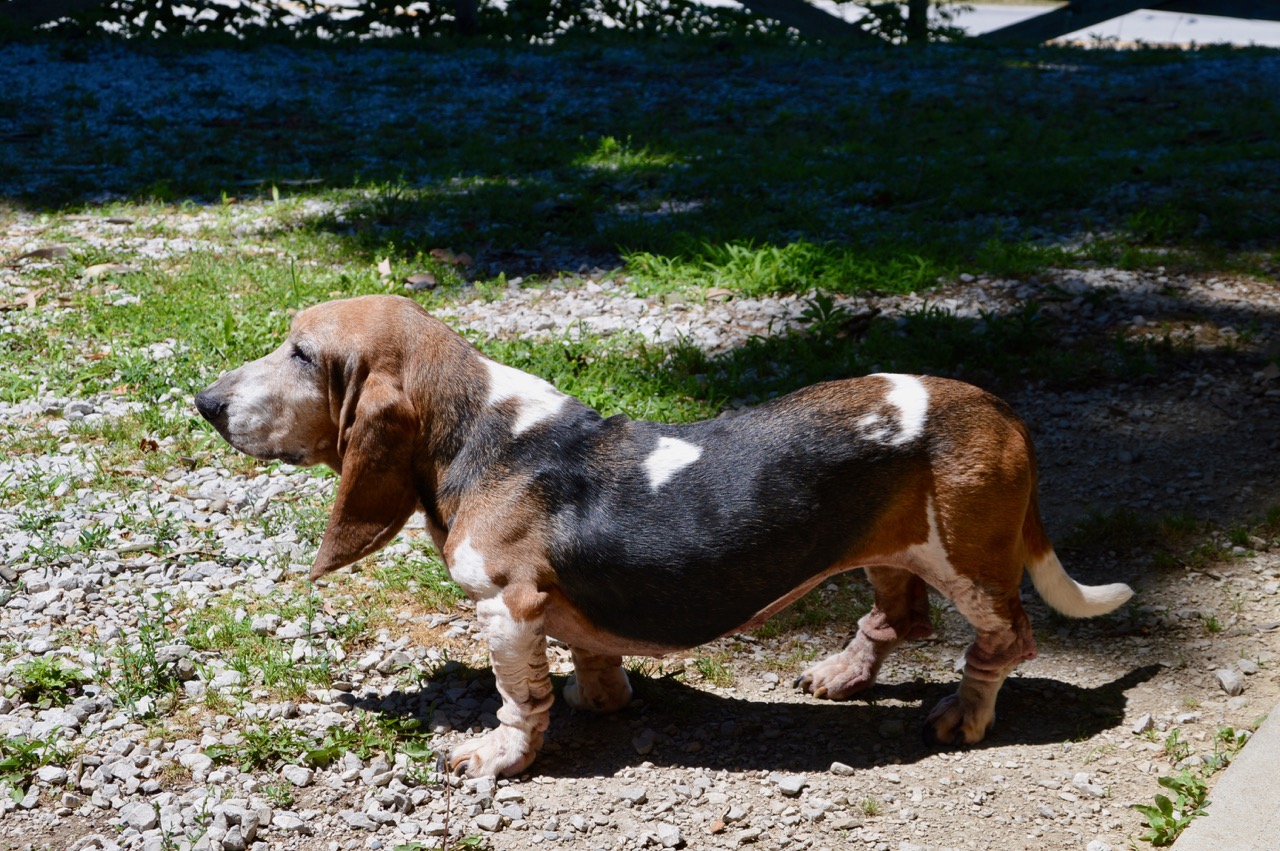 Heidi was outside long enough after her lunch that I was able to take a couple of photos of her. She is almost getting fat now and that is quite a switch from the last two years. 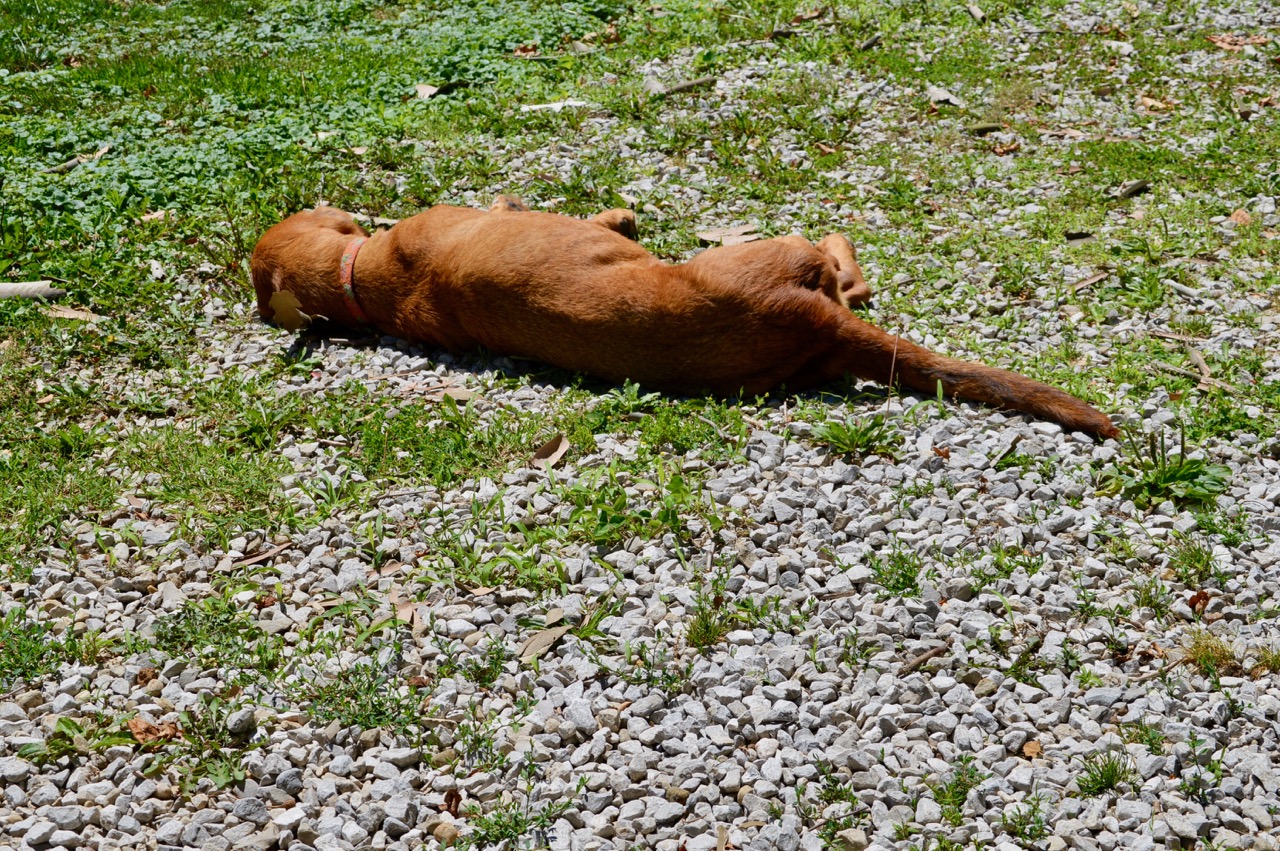 I guess Stella is like most of us after a holiday meal ... too much food and it's siesta time. She loves sleeping in the sunshine even if she gets too hot soon afterward and wants to go back inside. 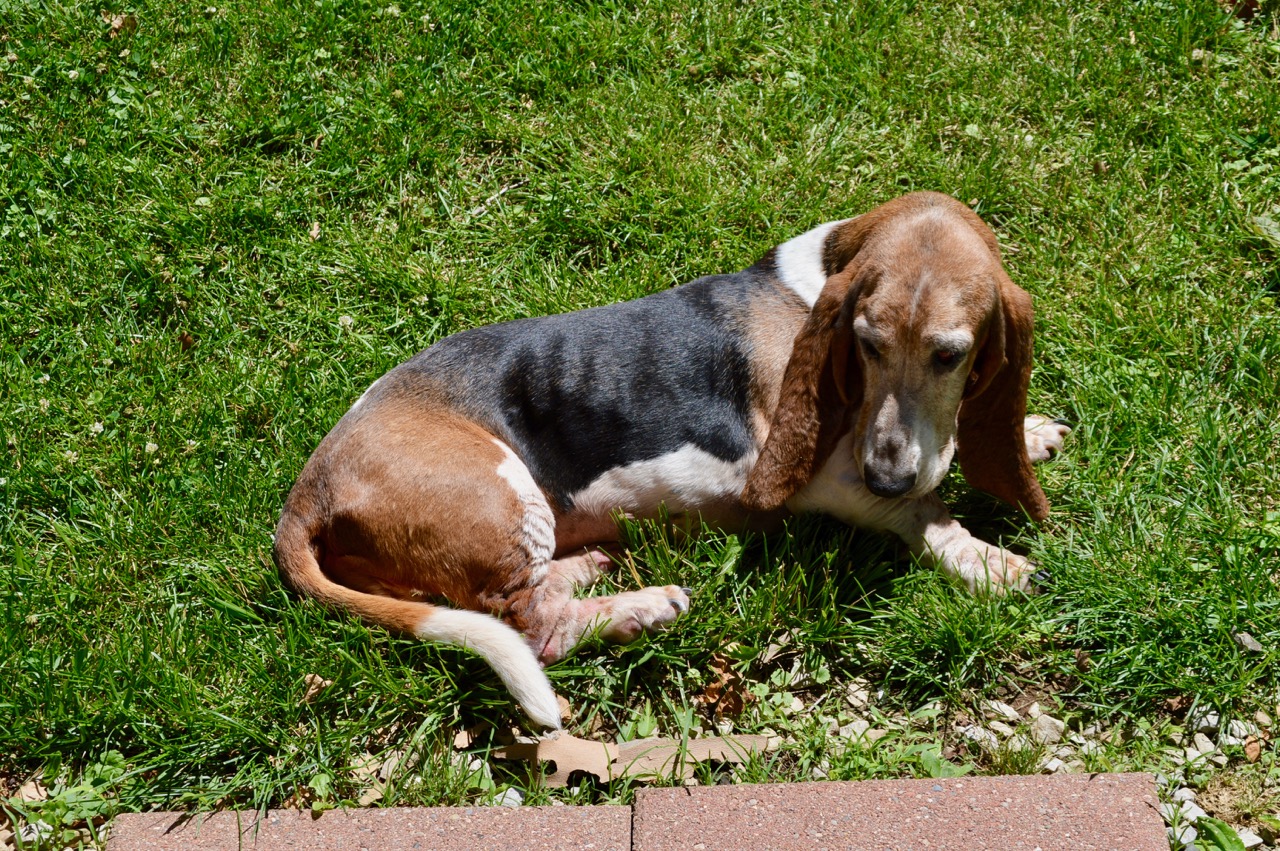 Heidi even found it nice enough outside to soak up some sun. Not scorching hot, low humidity, a little wind, no bugs or mosquitoes ... a perfect day. 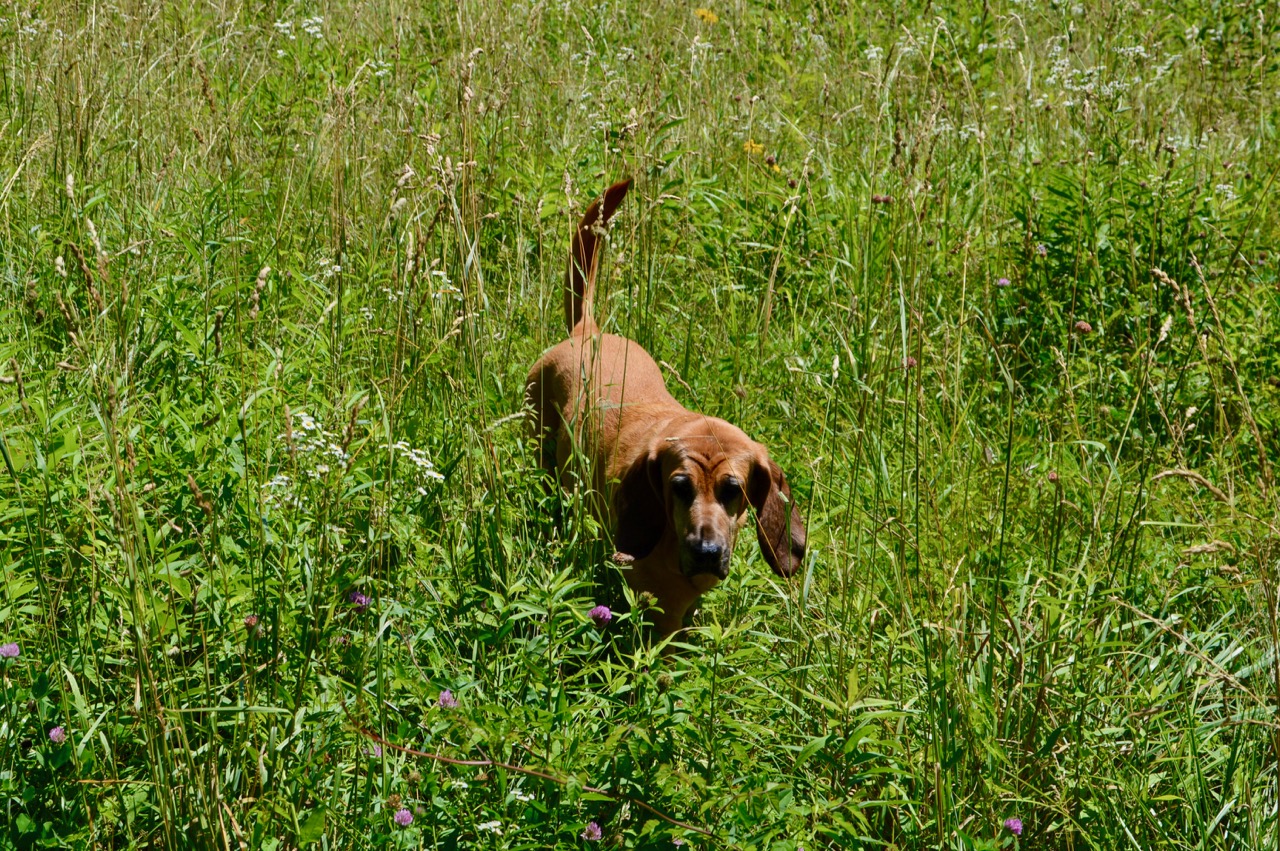 Of course Sadie had things to do and places to go ... she never finds time to lay in the sun ... that is wasting her time. 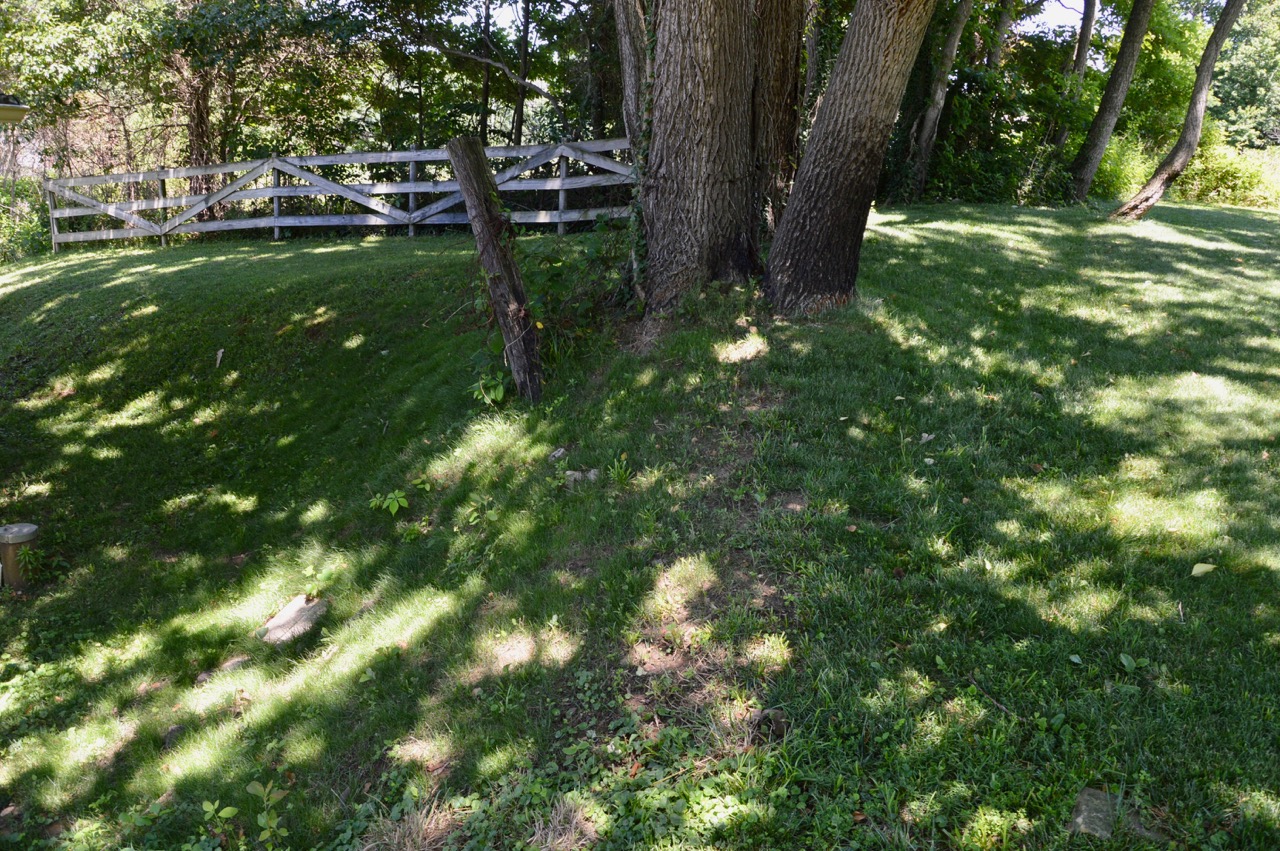 Last might when I thought Spring had arrived early, I raked out the roots of wild bushes that had grown on the left side of the fence post and trees ... down that bank. I planted some grass seed, only to have it go back below freezing by the end of the week.

I planted more seed, only to see enough rain that I could see it running down the bank. I had doubts that any of that grass seed would grow. So I planted the last of the bag I had left and let nature take it's course. So far so good, except for the ridge there in the middle, where I either missed spreading seed or it was washed away.

A few years ago all of that was overgrown brush, ragweed, and small saplings ... now it's the best part of the yard.

With all the hounds deep in sleep and it's not even 2pm, I have doubts that much more will happen today. I am going to grab my book and head outside for some reading along with a tall glass of fresh ice tea. We will get another hound walk in later this afternoon. 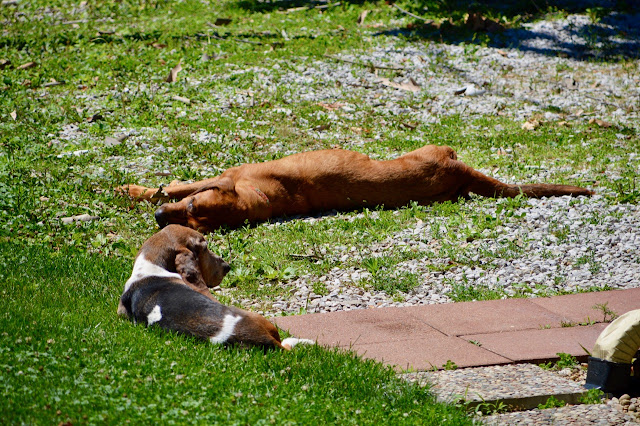 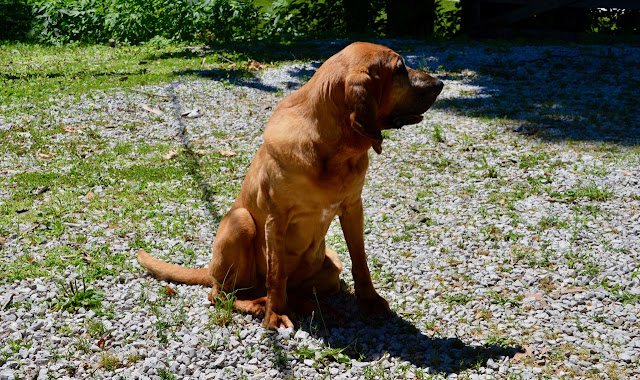 Sometimes it's just too fast paced here in 'the tropics' of Southern Indiana.
at June 20, 2017