The day started out so bizarre a little after 5am, that I'll get to that later in the post. It ended a little 12 hours later with Stella not wanting to go on the afternoon walk as I was about a step away from the field and Sadie was hopping up and down with her "let's get going" energy.


We waited this morning for the storms to pass through before taking the first walk of the day. When it comes to getting  your shoes and legs soaked walking in the early morning field, it doesn't matter if it's from heavy morning dew or what the strong thunderstorms left ... it's still wet. Stella actually trotted from the carport to the field and then right past me. I'd never see her with that much early morning energy in quite a while. 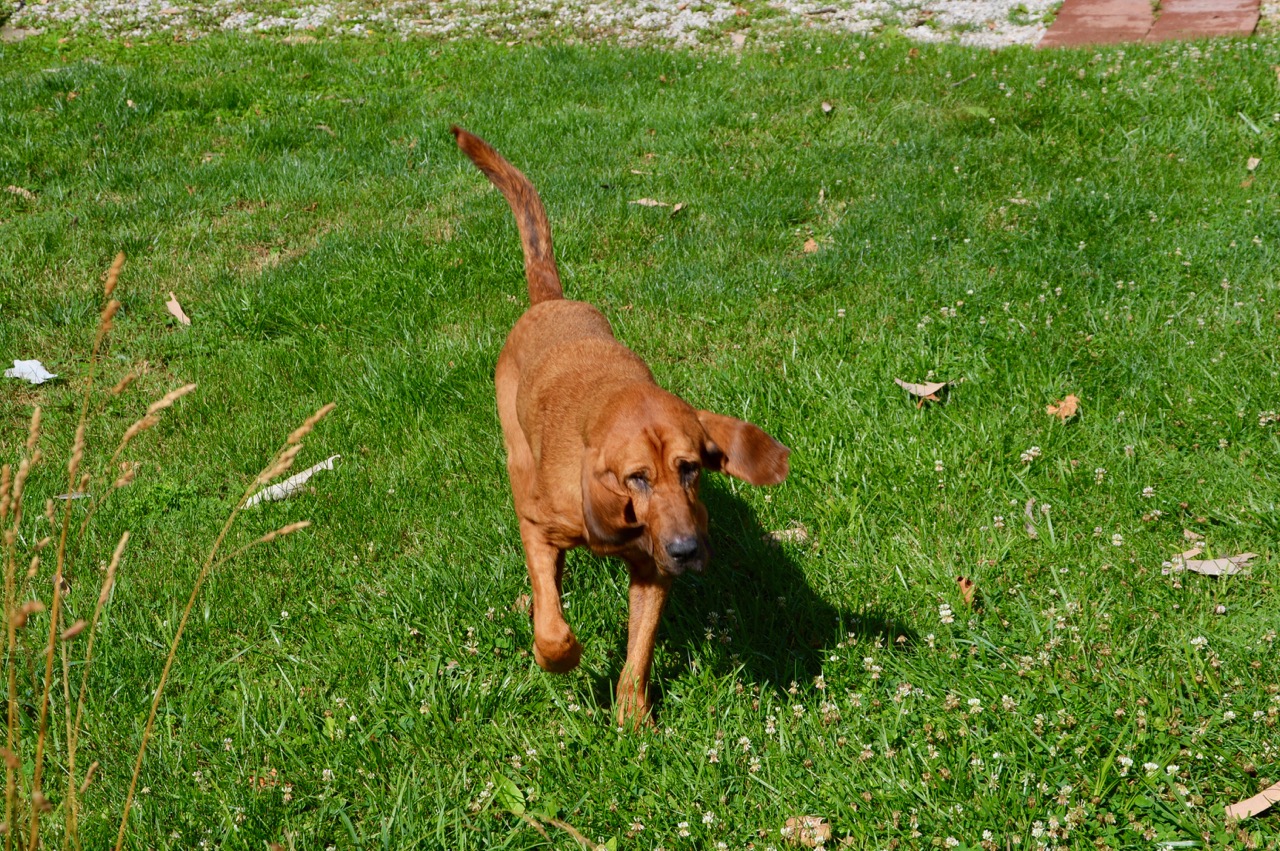 These bright orange flowers will not last long. I expect as soon as the field dries out with the 4 straight days of sunshine we plan on getting, they will cut the field and start baling it by next weekend. 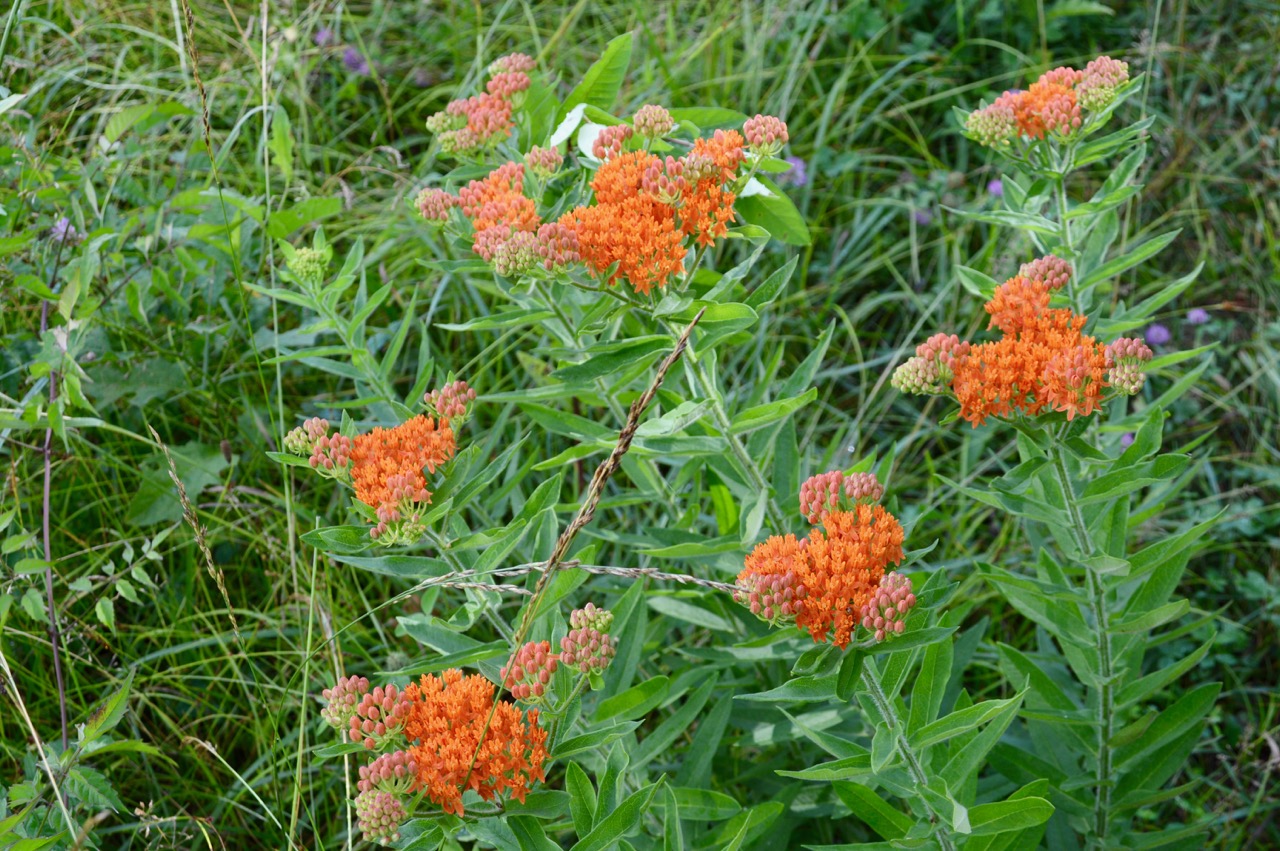 This afternoon was a different story for her though. Around 5pm Stella, Sadie and I headed outside for the final walk of the day. It had just rained but nothing was left on the weather radar that showed we were in danger of getting rained on. Stella got no further than the six red blocks at the corner of the house known as "Winston's Patio", where she stood and stared at Sadie and I like we were crazy. 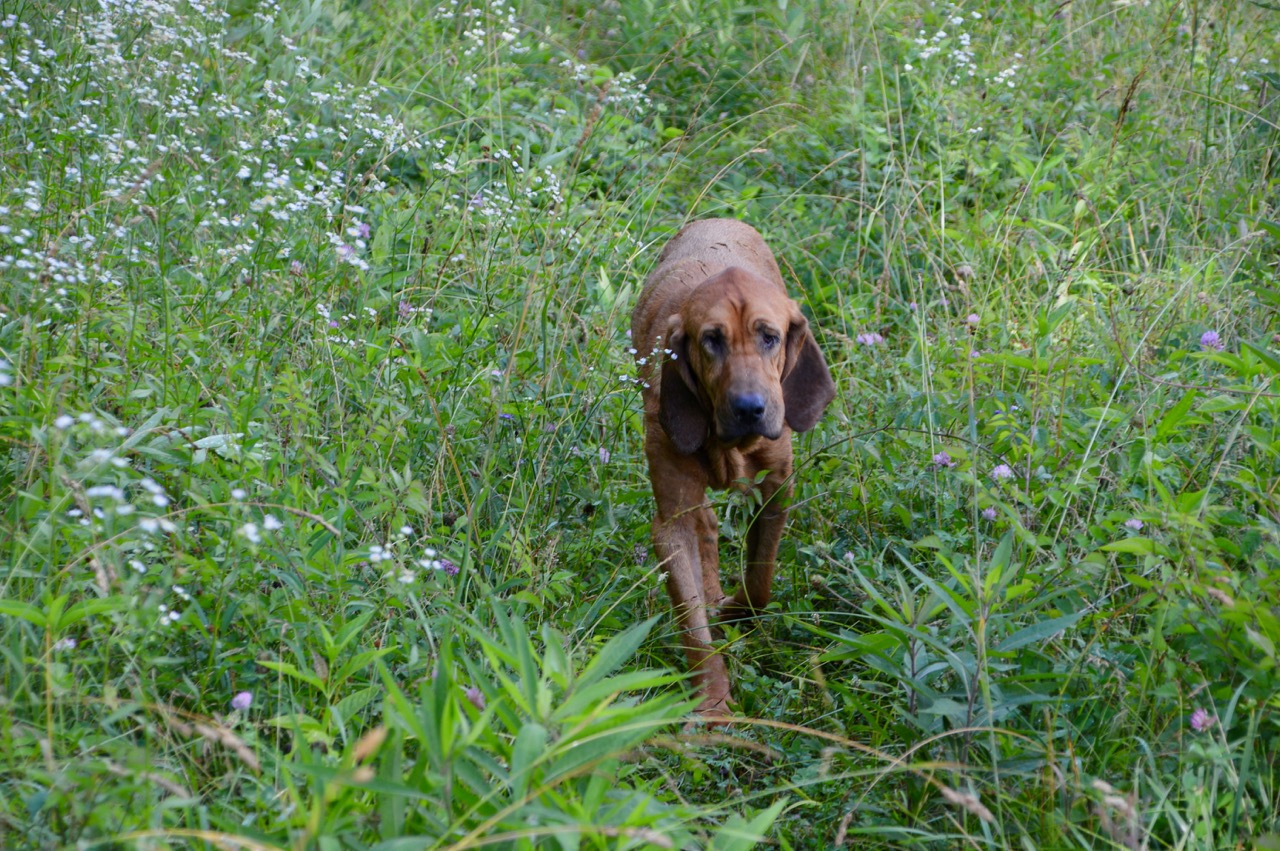 These few pictures are all from this mornings walk. 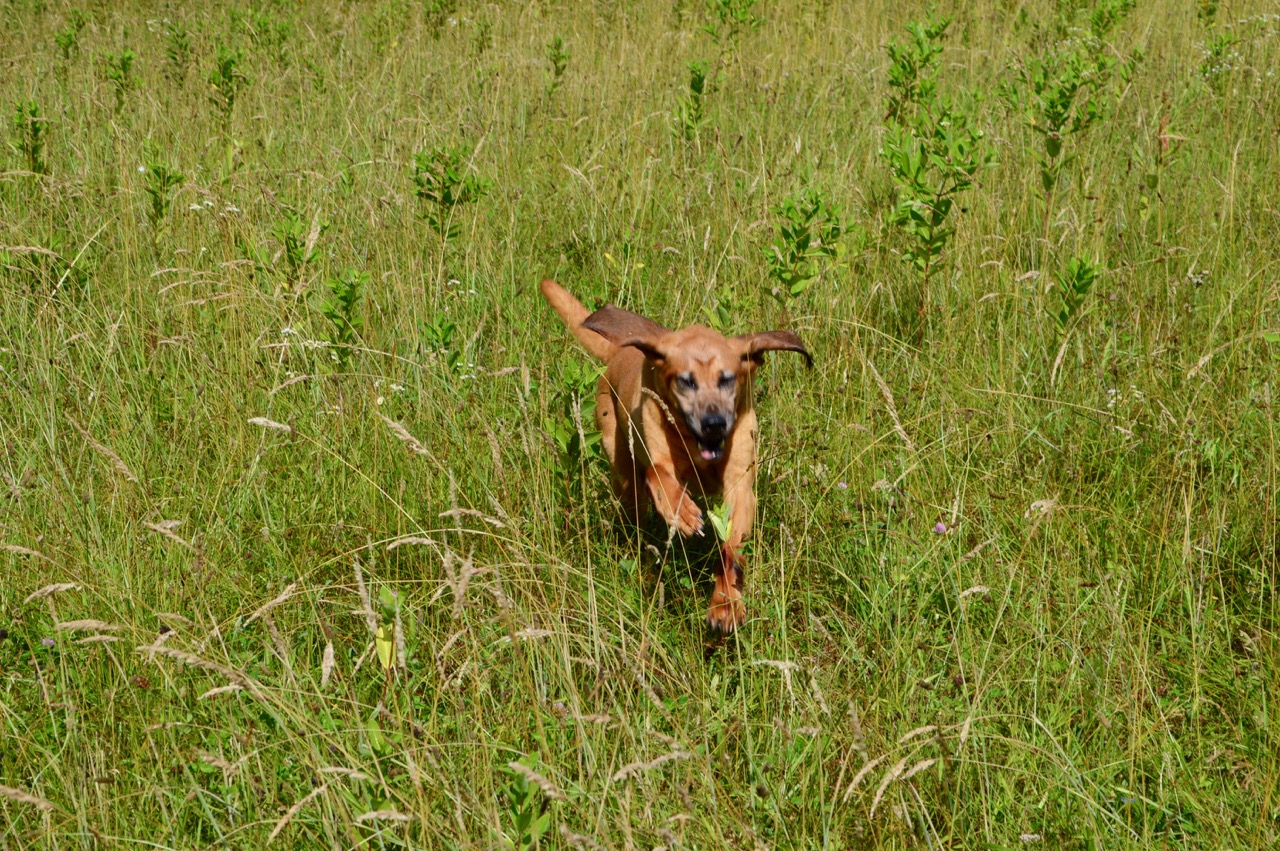 I kept asking her "don't you want to go on a walk", she stood and stared as if to ask "can't you figure it out ...no". Finally when I asked her if she wanted to go back inside with Heidi, without any hesitation she turned and headed for the door.

She did not want to go on the walk. 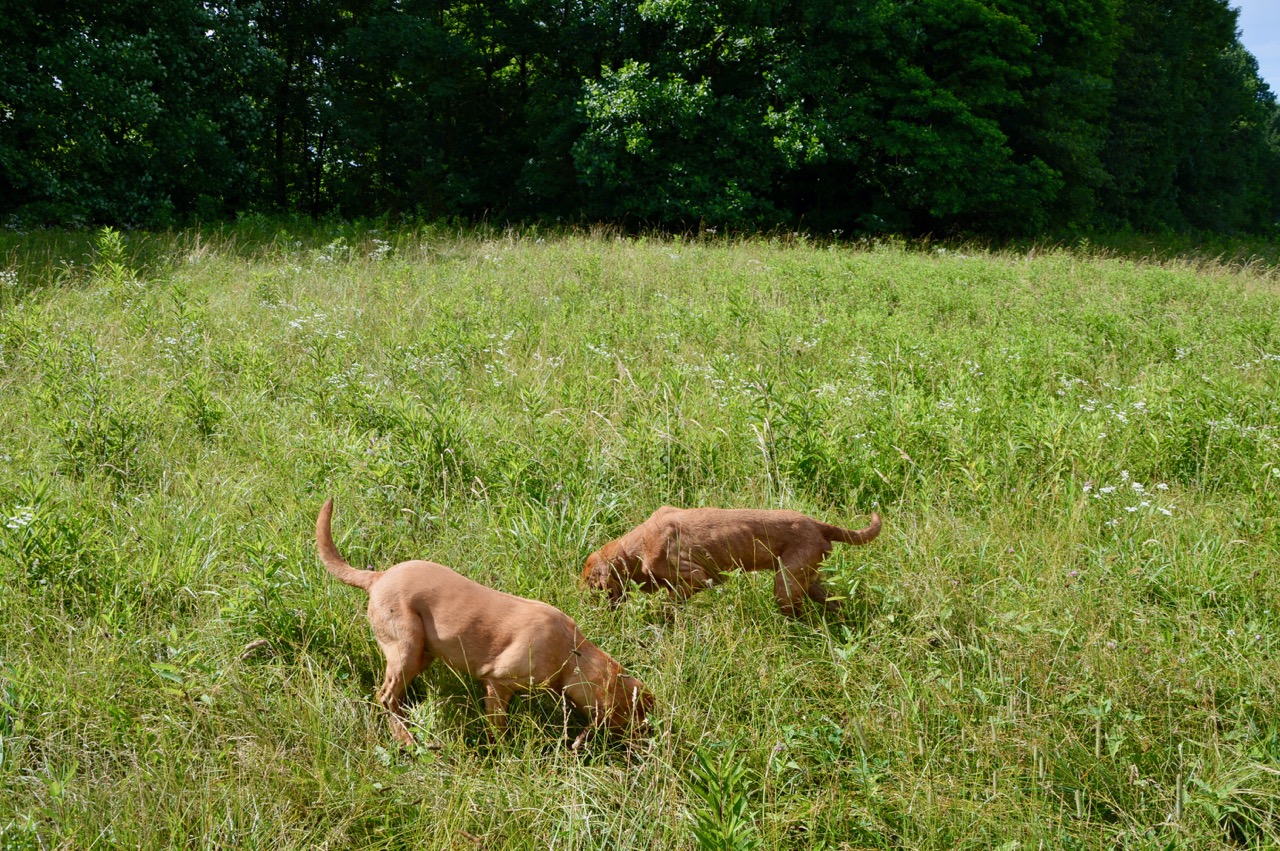 She did something similar last week for an afternoon walk, but then after getting back inside she walked to the door wanting outside just as soon as she was inside ... then walked slower than she normally does.

I take each of these instances as signs that something is not good with her. Her days and nights are normal, no signs or sounds of pain ... but she would never turn down the chance to take a walk. Thinking back to past hounds I've had that ended up sick, turning down a walk was their sign they were sick. 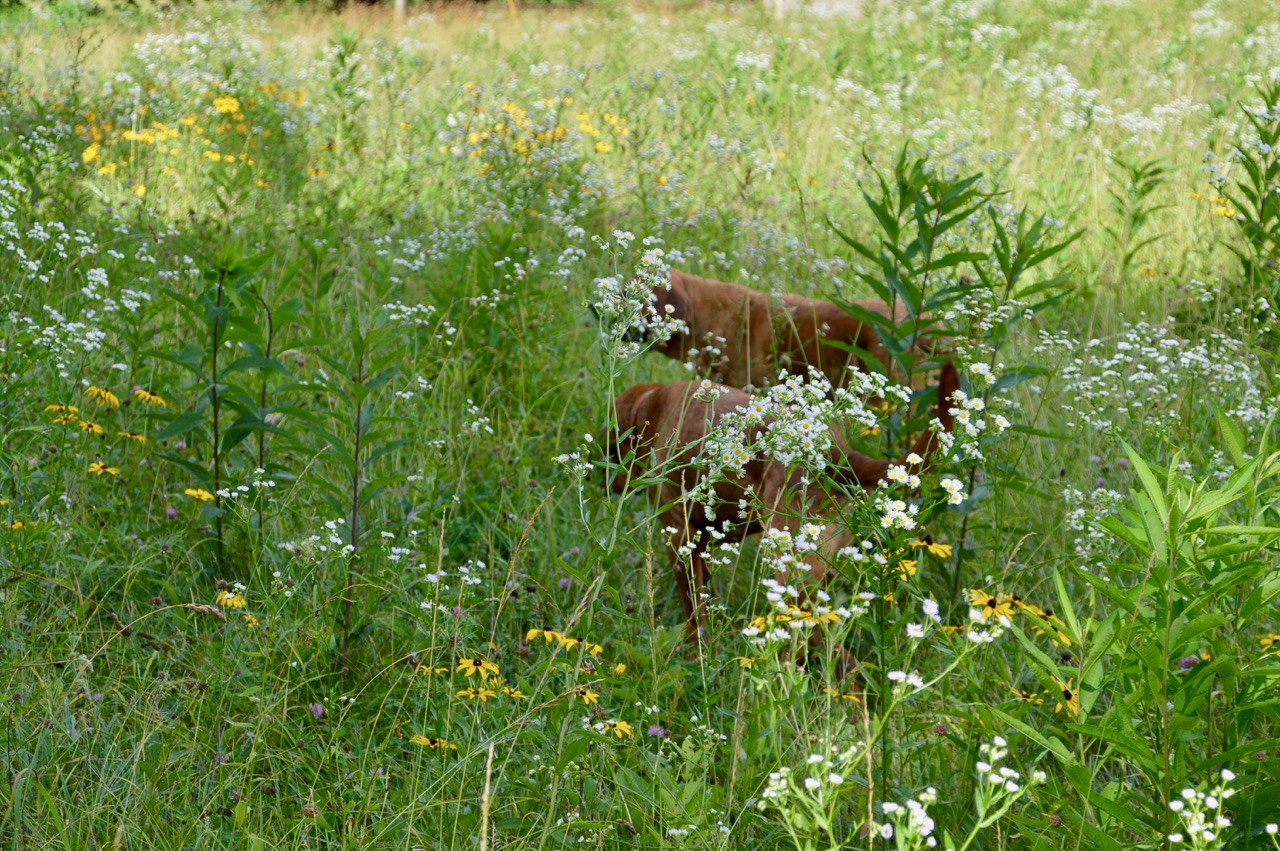 I want to thank everyone for their comments and emails. I decided earlier today it didn't matter what those 4-5 people do, I don't care ... they'll be ignored. 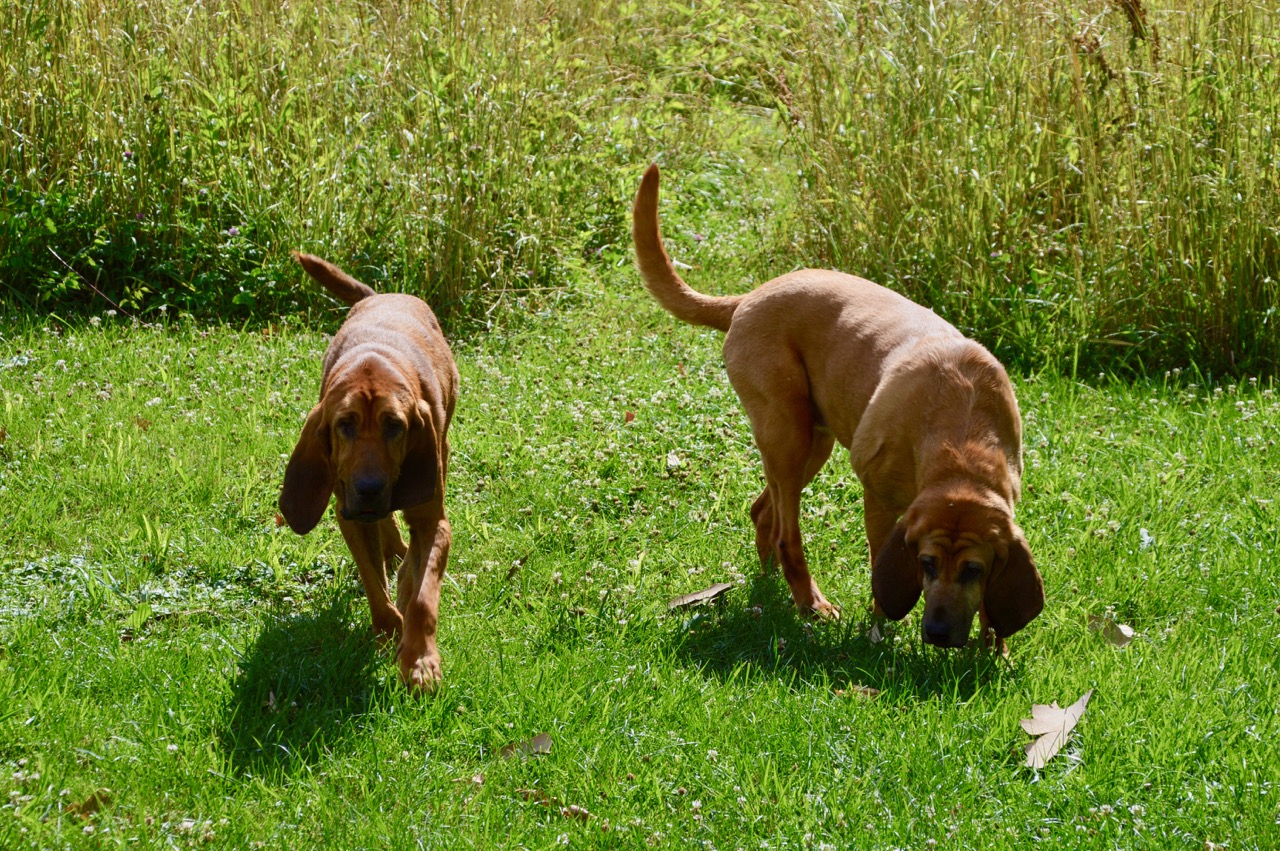 Now for the story of the day that is too bizarre, especially when it's 5:02am after checking my watch while wondering what is going on with me.

I'm woken up with flashing lights moving around the top of my bedroom, with shades of red. LSD is not involved. It's the same type of lights I see at night when the local police or state police pull someone over on the highway in front of the house with their lights flashing.

I figured they had pulled over someone on their way to work so I decided to get up and look out the kitchen window to see where the cop was in relation to the house and what part of the highway they sat. This is the first problem of my day ...

There is no cop on the highway and there are no flashing lights ... but there is a huge light show outside with loud thunder just as the winds picked up and the severe thunderstorm we were warned about had started ... with a house full of open windows.

No need to stop reading yet, that isn't even the highlight of this story.

I return to bed and try to sleep for the next hour. So far my Garmin is telling me I've slept a little over 6 hours and zero of it has been deeper than a 'light' sleep plus I got up earlier and my total time of wandering around the house has been 23 minutes.

So I decided to start the day a little early. I get out of bed and make my morning coffee while all three hounds sleep through thunder and lightning. I can take advantage of 2 hours of internet data that is in that extra free 50Gb pot. It takes a lot of data to upload all of my photos from the previous day into Google Photo and Flickr, for online backups.

So to cut this thrilling story short, I'll get to the point. I have two cups of coffee (normal), take the hounds out for their morning walk (normal), then sat down about 9am to log in my meals into the app on my iPhone that is tracking what I eat with hopes of losing weight faster than I have been.

Bizarre #1 -- I go to "yesterday", enter the meals I didn't log in the night prior. When I go to what I think should be Saturday ... the app says it's June 17th ... which was on Friday. I even tried it a couple of different times just in case there was not a mistake with the synchronization between iPhone and watch.

Bizarre #2 -- I noticed the screen that breaks down my sleep from the previous night is on the wrong date ... it shows June 18. That can't be right I think to myself because it's the 19th and Sadie's birthday. I even go into the edit portion of the page and change my wake up time to 6:02am because the screen is showing 6:58am but I did that the day before.

After making the change I realize I was on yesterday's screen and it was right to begin with ... but why is it showing today as the 18th.

With the flashing lights to wake me up, the normal ration of caffeine and now this ... I am willing to let things go as is and forget about it. I am positive the Garmin and the iPhone did not finish it's synchronization correctly and it will fix itself later.

Then the the world came crashing down on me ... I couldn't believe it ... was I in the Twilight Zone?

You're right, for the short 3 hours I had been up I thought it was Monday morning, was sure of it, even though I thought the traffic pattern on the highway was a lot different than a normal work day.

Needless to say, I have spent today just a few steps off the pace. It's good that the hounds can't read a calendar.

To those I made famous yesterday ... blogging will continue here in 'the tropics' of Southern Indiana.
at June 18, 2017