Heidi Is In Hiding 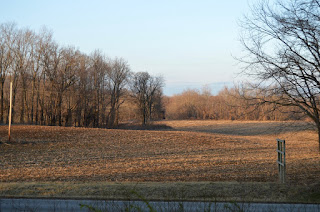 I don’t believe Heidi was feeling good yesterday. Her activity level was even lower than her normal one. Her stool late evening looked like she might be sick. This morning she was up before anyone, with a full body shake with flapping basset hound ears waking me up as daybreak shined through the window.

The bloodhounds and I chose not to get up at that time, nor do a full body shake.

Later, daily morning routines were followed. Seems just like another day, but it’s Friday. That use to be my favorite day of my work week. Now in retirement every day is a Friday to me … it’s great.

While Heidi stayed in bed, the bloodhounds did their 1st thing in the morning search and destroy mission. They always like to see who or what has been in their yard, field, under the cars, or behind the chair. I suspect it is the cat I see at times in the field past midnight. Her eyes shine bright when the flashlight catches them.

As you can tell from the photos, Sadie and Stella didn’t do much. Where are the days where they would start wrestling or playing as soon as their paws touched the yard?

Instead Stella started off with long scratch. 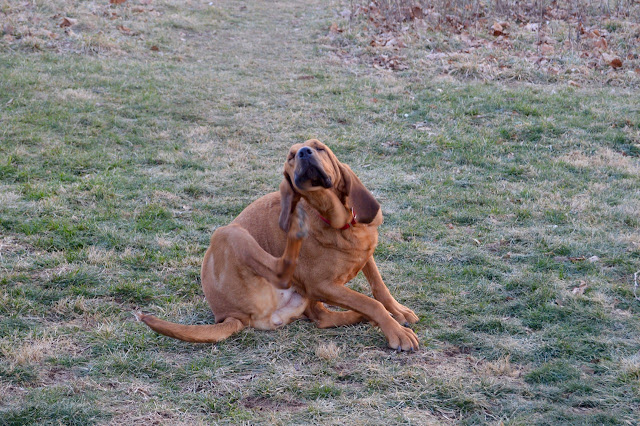 Sadie went looking for her first diet supplement of the day, while I walked across the frozen grass to the piece of land I cleared just last April and is now a part of the yard. I’ll set a chair out there this spring, even though I hate having to mow around things. One of the reasons my yard is pretty plain. 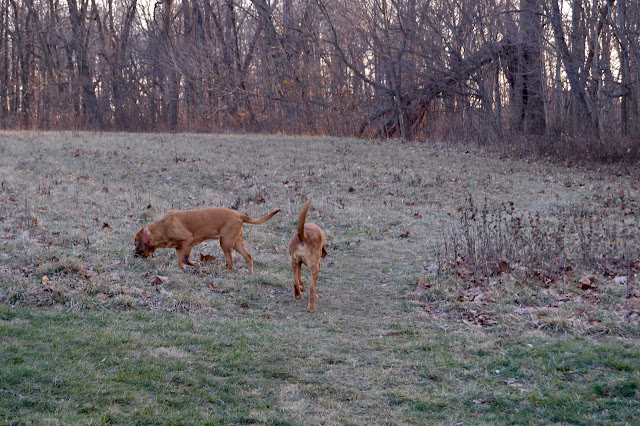 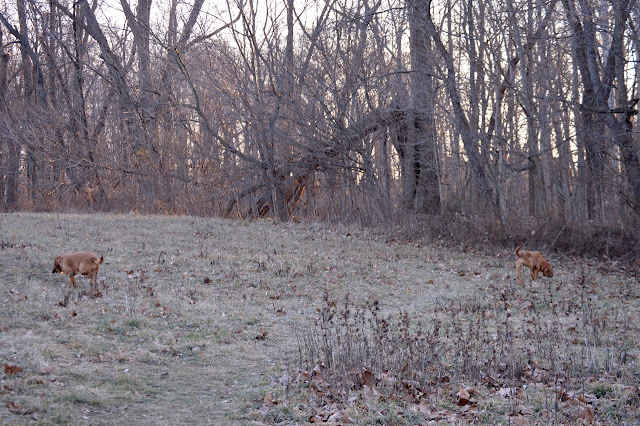 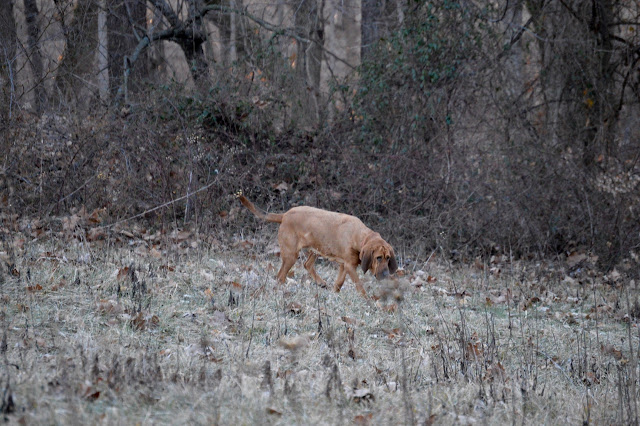 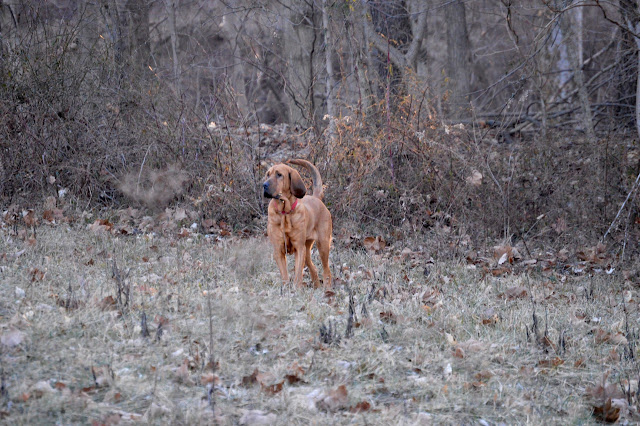 I had my first test this morning to see if the “new policy” was going to work. Sadie had found her first ‘dietary supplement’ today. 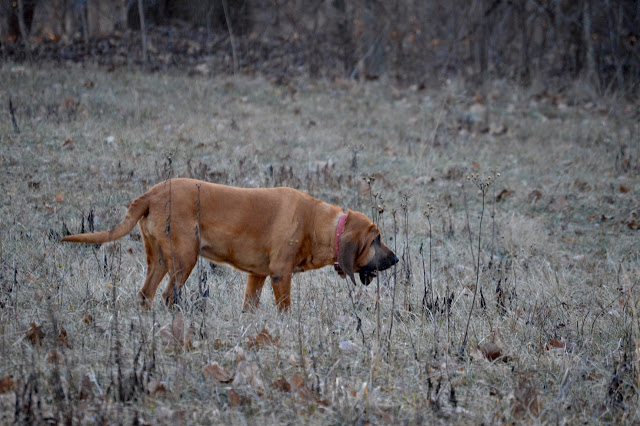 While Al, over at The Bayfield Bunch said last night that snow is in his Congress Arizona forecast, I am looking at sunshine and temperatures to hit the upper 50’s today. In the Midwest. In the month of January. In the middle of winter.

As you see in these last photos, the hounds are heading for the house. Not one minute was spent on playing … that started as soon as they took a step inside the house. It never lasts long before they stop with Stella chewing her Nylabone and Sadie laying in the corner of the living room, with her back against the vintage 1975 paneled wall. 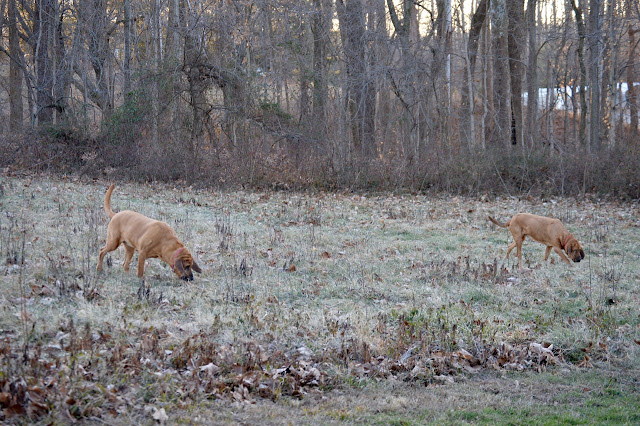 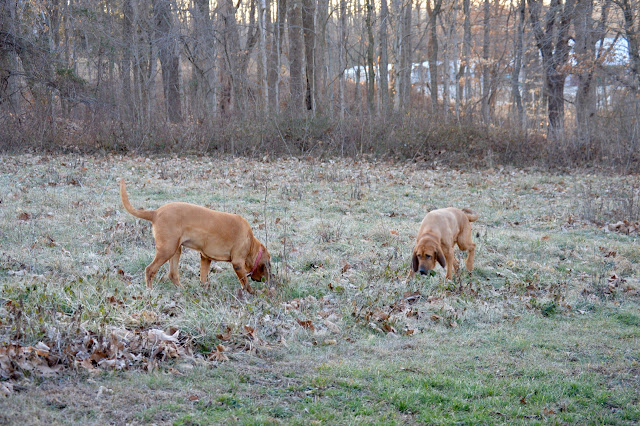 Before I go I want to talk a little about Internet Browsers. My satellite internet account started the first day of the billing cycle yesterday so my speeds were back in the 12-14Mbps range. I had 15Gb on the counter for the next 30 day billing period. Once I hit my limit of 15Gb per month of data a few days ago, my internet speed reduced to the “old days” of dial-up connections. I was turning a .44Mbps for the last couple of days. Yes, that is a ‘point’ you see before the 44.  :)

So I keep a close eye on my data’s burn rate, tracking it daily in an Excel spreadsheet. (of course). I also have an Activity Monitor open at all times on my 2nd monitor just in case a file downloads that I am not expecting. I have ALL automatic updates turned off. I also have caught those unexpected downloads before, that can burn a Gb of data in a matter of a minute.

But that does not stop Google. I glanced up at that Activity Monitory last night, I’m not sure why. What I see sent me into a panic state but I’m still thinking clearly. I have been through this drill before … the Activity Monitor chart is maxed out in blue … something is downloading and taking a 100% of my cpu. I tried to force quit … it was relentless. I ended closing Google Chrome and the file went away.

By the time I got the file download stopped, a day’s worth of data had sprinted thought my hard drive. Gone! Just like that.

I do a quick search on the file name and find it its an update by Google for any Google products you are using, even if they are closed on your computer. Different articles were saying the same thing “it acts like a virus” but it’s only a Google update for all of their programs downloaded on your computer.

As much as I like using Google Chrome as my browser, after that I decided it was time to change. Firefox or Safari. All my bookmarks (favorites) are the same on all three browsers. Safari is faster, Firefox is more secure. I’d love to use Safari but I cannot stand the gray tabs and the bookmark bar. Gray gray gray … give me some color. Give me those website icons across the bookmark bar, for the sites I’ve added as a favorite.

So this morning I am switching back and forth between Safari and Firefox. Everything is updated. Firefox updated to 44.0 yesterday. Safari seemed faster last night but today Firefox is fast so that is my browser choice for today.

In the meantime, Google Chrome has been deleted, uninstalled … whatever from my desktop computer as well as my laptop.

My data meter is looking great this morning, as the sun is shining in the ‘tropics’ of Southern Indiana.
at January 29, 2016