Today I'm Not Sure 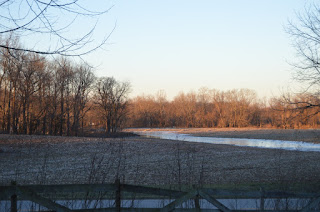 It is becoming the same routine, which is very good to get back to one that is similar to the one before Winston's back issue. Only this time we all almost 'slept in', it wasn't until 5:16am before Sadie walked in to wake me up to let Winston outside. We came back inside and slept to 7:58am, which about an hour later than normal ... it was breakfast for the hounds and the last day where Winston gets a daily dose of Prednisone. For the next week it will be a dose of 80mg every other day until the tables run out.

It was awful tempting to let Winston out of his gated area and let him "scoot" around the house. He was really active, whining to get out of jail and had that look that he was ready to resume a normal basset life. He is still very strong walking with only two legs since in the past two times he was walked me to the back of the field near the tree line to poop. He walks all through the field with me holding his back legs up off the ground. 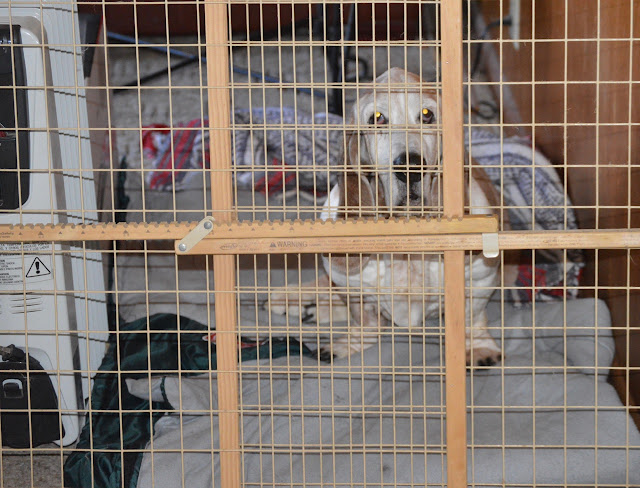 It was only a few minutes after I resisted the urge to let him roam the house, that he was asleep. We headed for the vet about noon for his 3rd laser treatment. How do you know if they are really working? There is nothing to compare with. He could be improving just from the anti-inflammatory meds and the amount of rest he has been getting. I will still continue the laser treatments though. 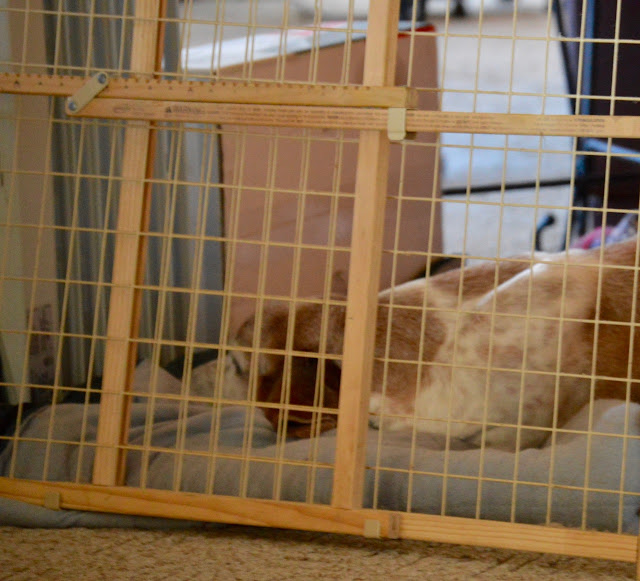 While Winston slept this morning, Heidi took her normal position, Stella found her favorite bone and Sadie sat right next to my desk to bother me. 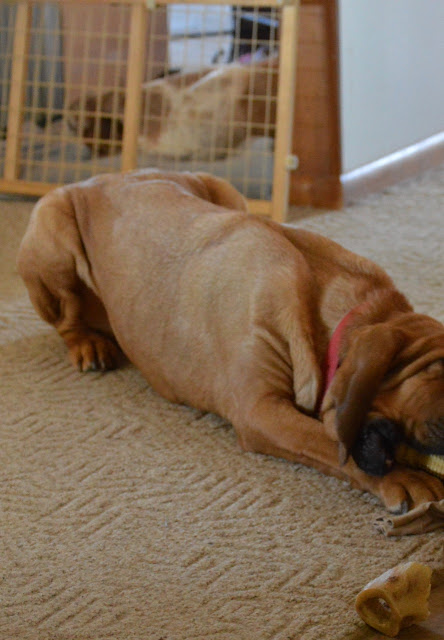 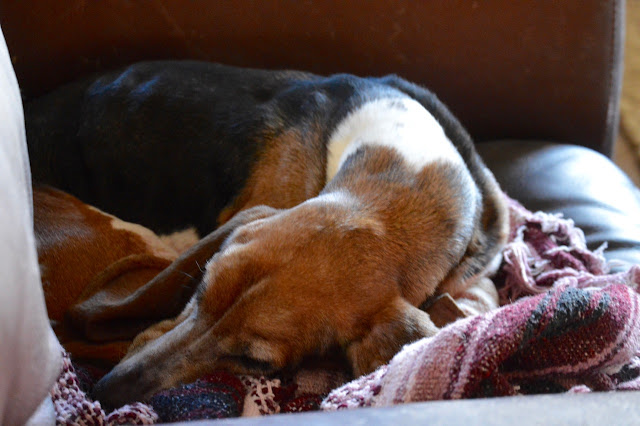 I am sold on the 4Health No Grain dog food with the Duck and Sweet Potato combo. Duck is the only protein source. She has only gone through about 15lbs of food. Her "raw" spots or really anymore just "problem" spots because they are not raw ... have hair trying to grow back but the big difference is the skin is not hard but soft as normal skin would be. Her coat is not as "greasy" as it was with Earthborn Grain Free but soft and shines.

As I was bring out the dog bed from the house to the back of the FJ for the trip to the vet for Winston's laser treatment ... he started barking and howling nonstop and his tail was going a mile a minute in his gated area.

It was a great day today but for some reason I've not been able to shove the idea away that this might be the best he gets. That thought actually started this morning when I had been awake before the hounds woke up. You know the time of day ... dark, middle of the night, quiet ... when any doubts you have about anything come out to screw with your mind. It was then I started thinking he may not ever walk again.

So I had to ask the vet tech that has been doing the laser treatments ... again ... what kind of success has she seen with this treatment. They have used this laser treatment a lot, but Winston is their first basset hound getting the treatment. All Dachshunds ... some have started walking again, some have not. I told her I didn't think it was fair to the dog to have him use the two wheel cart. Sorry but I've never been a fan of those.

I told her that I planned on waiting for a while and continue these treatments but I know that I might have to put him down if he can't come back to walk again. She reminded me that what I am having to do now is hard on him. Hauling 60#'s back inside, pressure against a sore spine area, compressing his organs while I carry him ... isn't good long term. She also thought the use of carts are also hard on the dog, especially the way the basset hound is built, makes them hard to take on and off.

My concern is his right rear leg has been in a locked straight position since he hurt his back. That has never changed. To protect that leg he will always sit on his left hip. At times when he is walking and I am lifting his hips to keep the paws from dragging the ground it does look like that leg is trying to move in a walking motion but from the hip joint, not the knee joint. I can't get that leg to move when doing a little movement therapy.

I know you and I have seen the photos of the two wheel carts used by basset hounds ... but is that really fair to the hound?

When we came back from treatment it was time for lunch. Sadie and Stella were loving being outside. It felt a lot warmer than it was (around 30°) and they would love to go for a walk. The problem is the field is really saturated where the ground will come up over their paws and the edges of my shoes .. We will have to wait a few days for the daily  walk to resume.

Notice the edges of the water froze during last night and stayed that way most of the day. 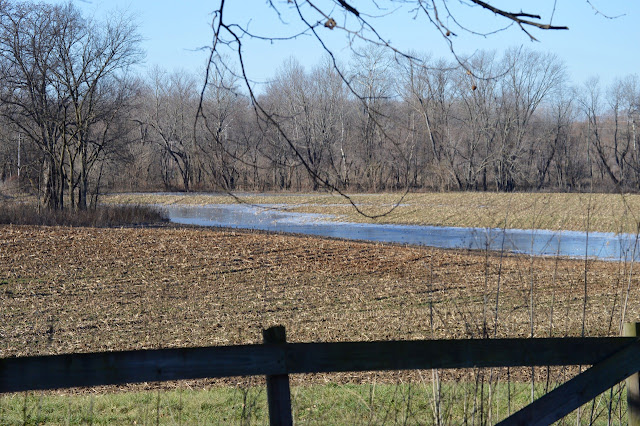 A few times today the bloodhounds acted like they wanted outside but once there they were not interested in doing much but posing for the camera. I think they have become bored with the current routine. 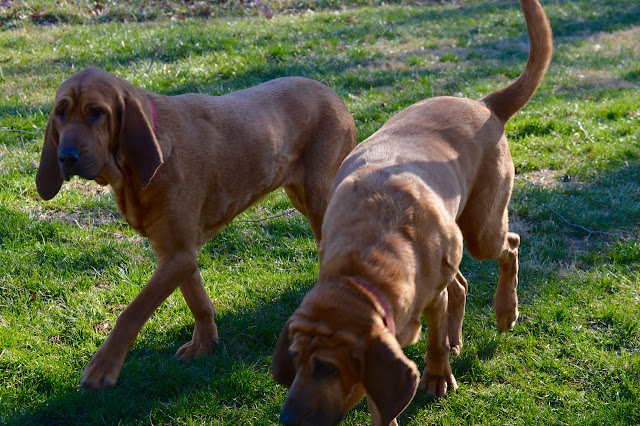 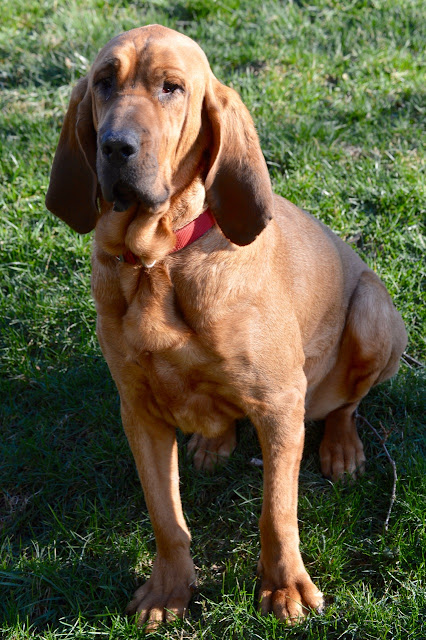 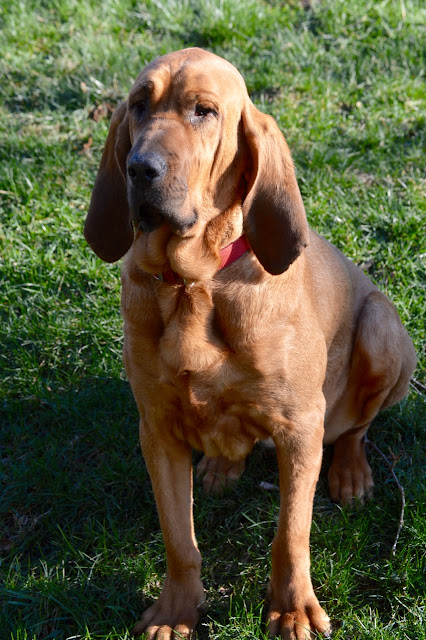 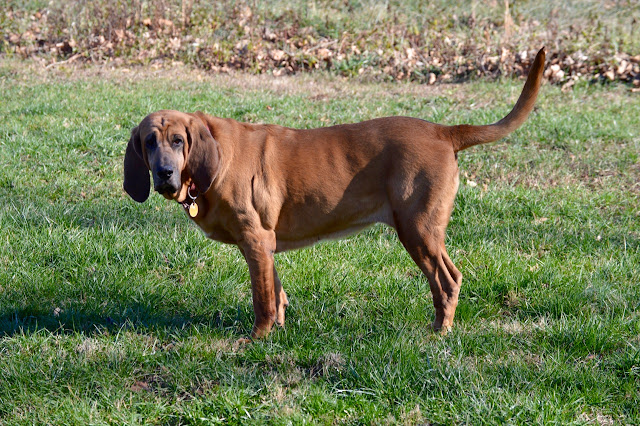 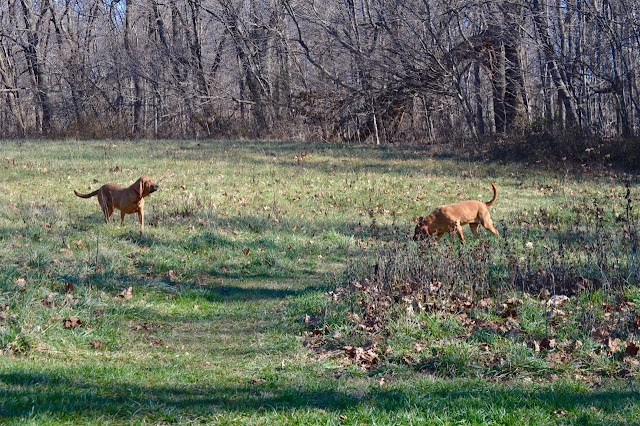 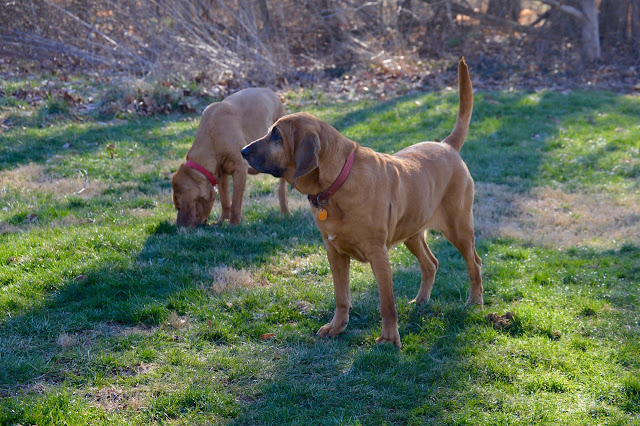 Sadie was sure she heard the words "eat" or "food". 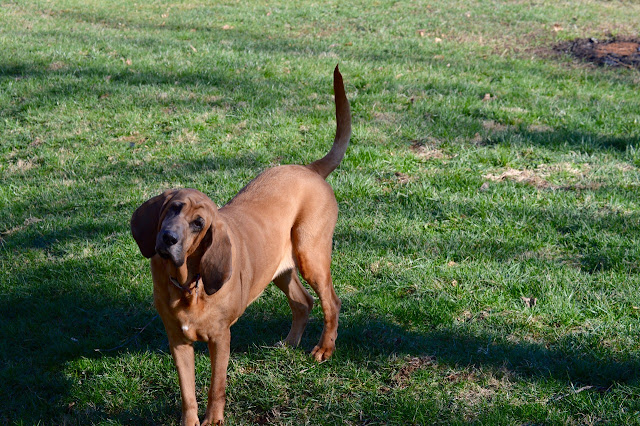 After the treatment, some lunch and water, a trip outside ... Winston was settled in for an afternoon of sleeping. 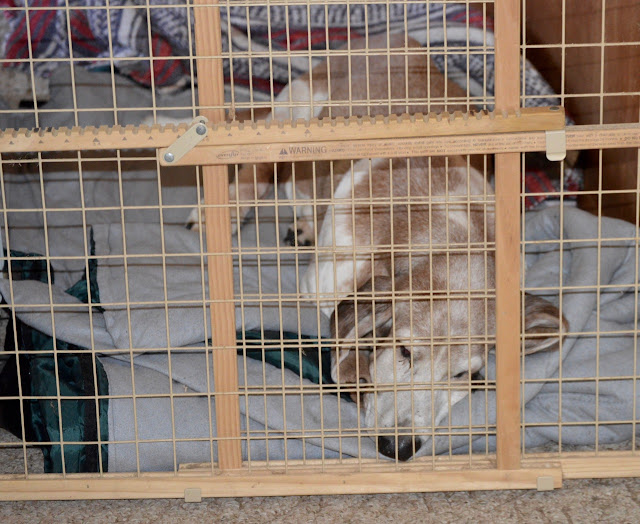 This post is a little early for the day but I'm going to post it now anyway and that will be it for today.

It's cold but it's a beautiful sunny day here in the "tropics" of Southern Indiana.
at January 02, 2016