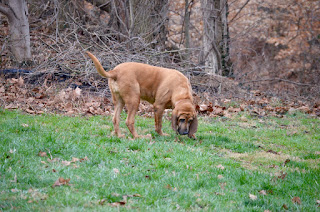 I was starting to get low on dog food for Sadie and Stella.  Heidi eats a grain free food for her allergies and a 28# or 30# bag will last almost 58 days for her. As usual when I get low on dog food I always look at Heidi's Skin spreadsheet where I track daily and rate her skin condition from 1-5, with 5 being the worst. I also list what dog food is being used and the main protein ingredients. I just want to check to see if I should change her food.

For some reason Heidi has been itching almost out of control these past few days. Yet when I look at where she is itching, the skin is perfectly normal. So I am going back to Earthborn No Grain food, and a blend I have not tried yet ... Primitive - turkey, chicken with whitefish meal.

Before I left though, Sadie and I had a nice inside game of fetch. I was at the kitchen table on my MacBook Air, taking in the great scenery outside a large window ... when I hear the bone drop on the floor next to my chair ... Sadie was looking up at me asking for a game.

Stella does not fetch a bone but the previous owner told me she does like to chase and catch frisbees. We will try that next spring. Consequently Sadie had the game of fetch to herself. 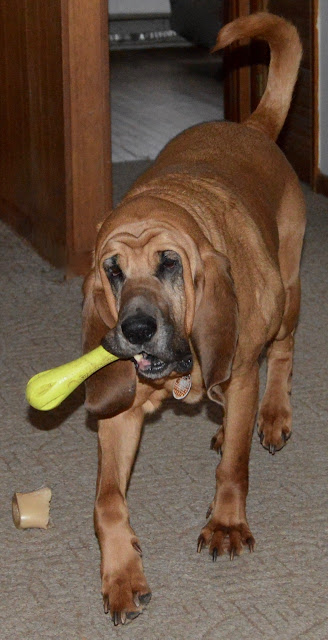 Stella has no interest in chasing a bone. 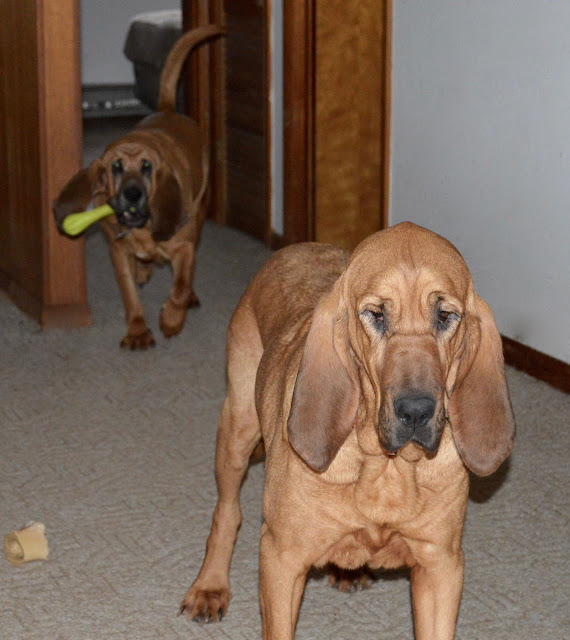 You might remember that I mentioned a few weeks ago that Stella was showing separation anxiety while I was gone. She was perfect from Aug 30 - Nov 24. I got over confident and went down to see a friend and his wife for a "day trip". I was gone about 12 hours and came back to a bedroom that was destroyed. The worse damage by a hound I had seen in the 28 years of having them.

She DID have the reputation and I knew that when I picked her up. Anyway that is a different story. BUT, because of that I decided why not ... I'll take her to the dog food store today because they allow dogs inside and there would be no chance of her destroying the seats in my FJ, if I were to leave her outside in the FJ.

You would think with a hound that loves to eat as much as she does that she would have LOVED that store. They have the open boxes of bone treats in bulk she could at least smell before I bought them. I was even was prepared to control her from eating the bone treats out of the box ... That was not a problem.

She must have thought she was going to the vet. Or maybe she thought I was taking her somewhere and was going to leave her. She jumped out of the FJ, attached to the 6' leash in my hand and was nervous right from the start. Then she wouldn't go inside the store. Once I got her inside just enough to close the front door ... she sat down and refused to move. I got her to move and she was skittish, scared as we walked in the back part of the store to grab the bag of food.

Stella loves to ride ... even laid next to the bag of Heidi's dog food and slept some on the way back. She was THRILLED to be home when she jumped out of the back of the FJ ... with that familiar howling bark. So, she must have thought she was going somewhere to be left or I was giving her away. I guess we will have to take more trips.

Still no playing by the hounds outside today. There was light rain and they have no interest in staying outside very long. 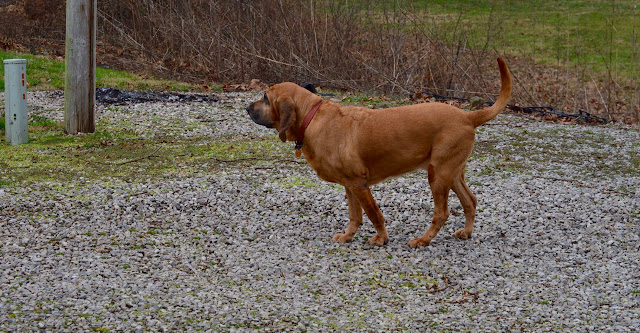 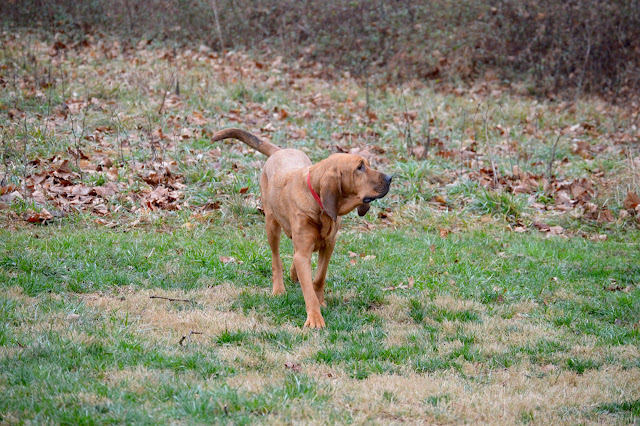 They did notice people down in a building in front of the field I take photos of on occasion. It could be interesting in the future, depending on how much noise there will be. The new owner is converting a duplex apartment into a child daycare center ... with a little rural touch. So I am not sure how much noise of excited and happy kids playing outside will carry up to the yard but that will definitely peak the interest of two bloodhounds that love people. 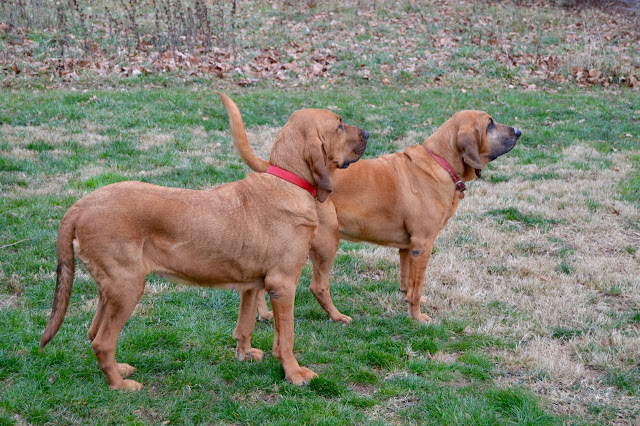 On the afternoon trip outside, Stella thought there might be a chance for another ride in the FJ and was a little disappointed we were not going anywhere. She ended up back inside taking an afternoon siesta. 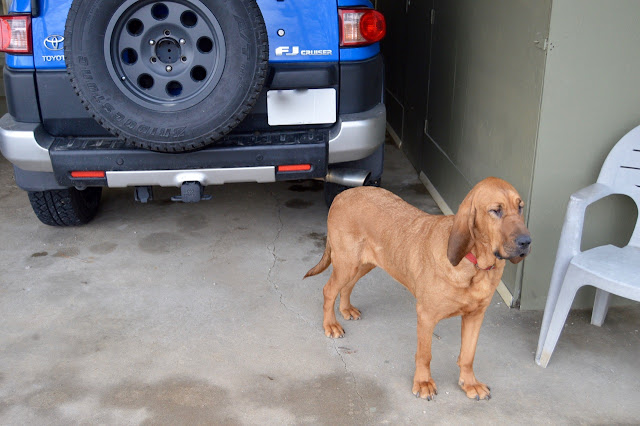 Of course her paw was touching her bone just in case Sadie decided it was hers based on those Bloodhound Property Laws I mentioned the other day. Sadie thought we should negotiate whether she was coming back inside. She refused to move for longer than I had expected. I finally won the argument without offering any bribes. 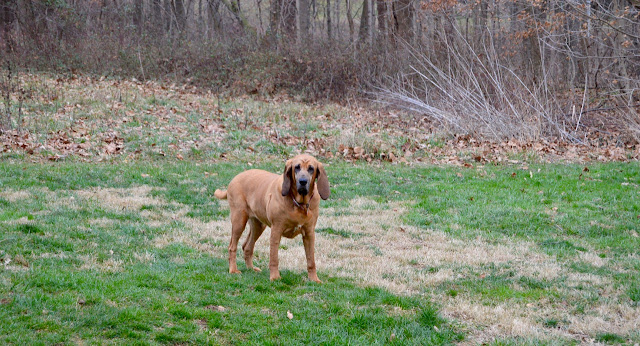 Here are a couple of photos of the past, one of Heidi about a week after I brought her home. She was healthier than now, very pretty, with some minor documented skin allergies. She is laying on "her" brand new dog bed I bought the day I picked her up from Guardian Angel Basset Rescue. She was unaware of the Bloodhound Property Laws until Sadie decided that was her bed. Heidi decided sleeping on my bed was a better deal anyway. 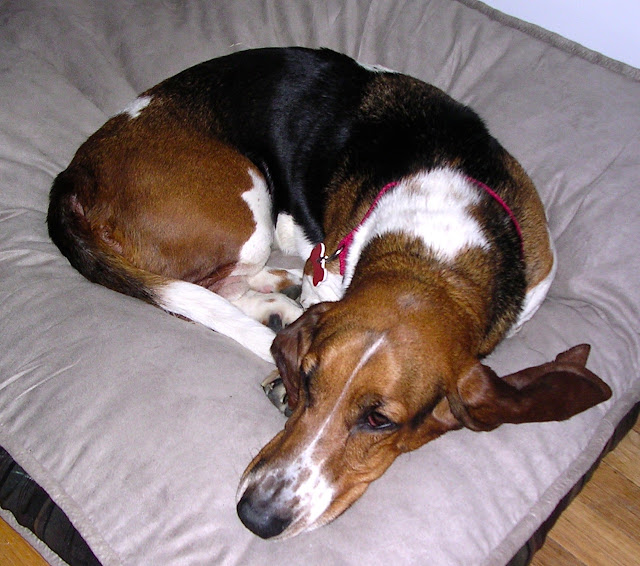 This next photo is of Maggie. You may have seen her name mentioned in the Winston Bio page or in recent posts. By the time this photo was taken she was full of cancer. You can see the swollen lymph nodes under her neck. She also had tumors inside her lungs. It wasn't a week after I noticed them until I had to put her down. I brought her home from the vet that July 4th weekend so she could enjoy a couple of more days at home. Surgery was not an option due to her weak condition. When it was over, the vet staff was crying in front of their next customers as we carried her out to my 4Runner. 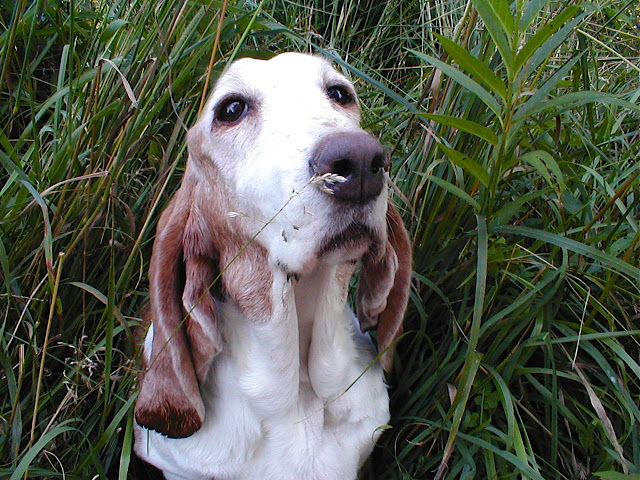 I might start something new on this blog, like ending my posts on occasion with a "blast from the past", and show some photos of the past basset hounds I have had. Maybe today could be a start for that to happen.

Oh, I almost forgot another photo. For the 2nd time in 3 days, an Indiana State Patrol car was heading my way, parade speed down the center of the the highway. I grabbed my trusty Nikon D3100 to get a few photos of the monstrosity loaded on the back of the flat bed trailer. A line of cars surrounded it. I don't really know if it was coming from the 3rd largest military base (inland) in the USA or it was some large farm equipment. My camera didn't know either since it decided for the thousandth time not to work. By the time I turned it on and off, then took the lens off and back on ... this was the only shot I could come up with. I'll not repeat here what I said to the camera. 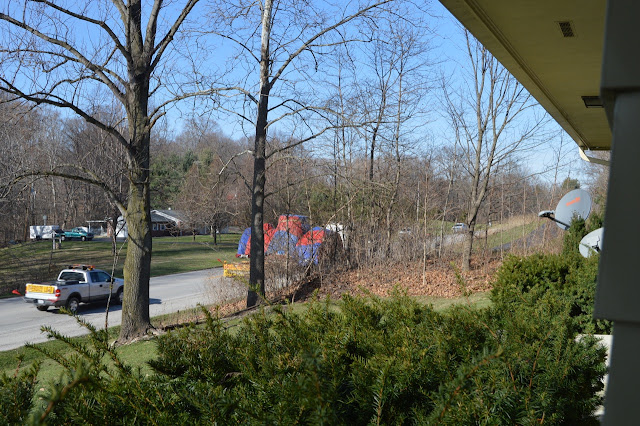 The weather never changed today. It may have been dark overcast clouds, with drizzling off and on rain but the high temperature still hit 51°. It will be the same temperature tomorrow only trading dark clouds for sunshine. Don't pack you bags thinking you want to move to the "tropics" of Southern Indiana because of the great weather ... by Sunday the high is suppose to be 28° and snow by next Wednesday.

I think Sadie and I need more games of fetch to pull me out of the ditch here in the "tropics" of Southern Indiana.
at January 08, 2016