Henry Finds Out He Barks 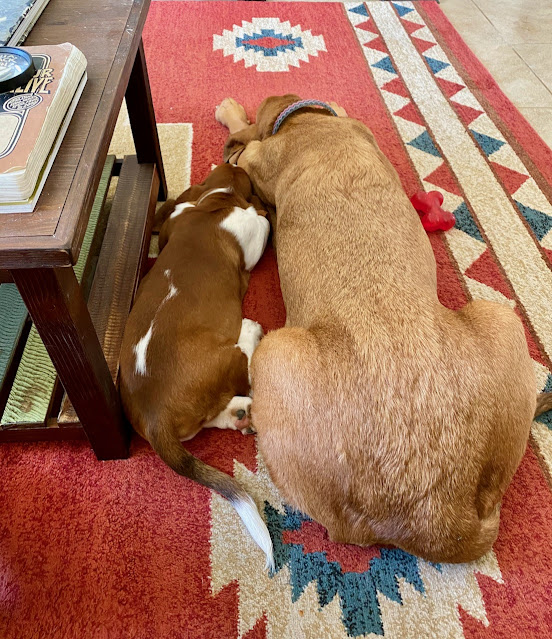 Henry found out very early this morning that he barks. He had barked on occassion a few time this week but today it was official. He barked, he knew it and he knew when to use it. Needless to day, the house is just a little noisier than the past. As you see, Stella is starting to adopt him a little more. By next week when Henry is tall enough to grab those long ears of Stella, she will be laying down some new rules for the puppy. 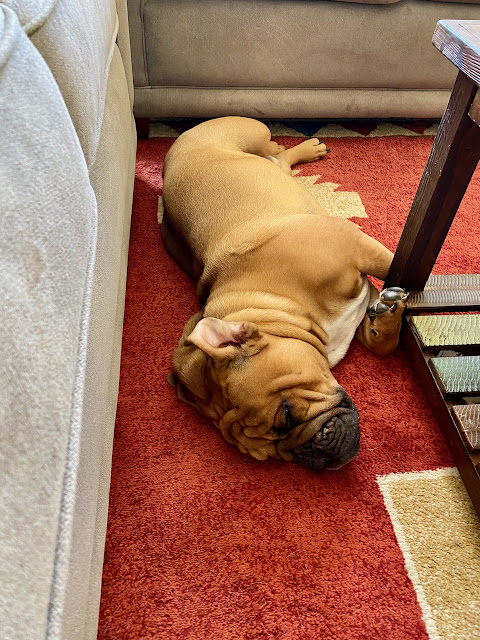 They have all been getting in their normal sleep times but if they are awake and not eating, Walter and Henry have stepped up their game in playing. Not only has Henry figured out he can bark, but he now knows he can run ... so the playing arena has expanded a lot from just a week ago. Many times it is Walter who is asking to stop and rest. 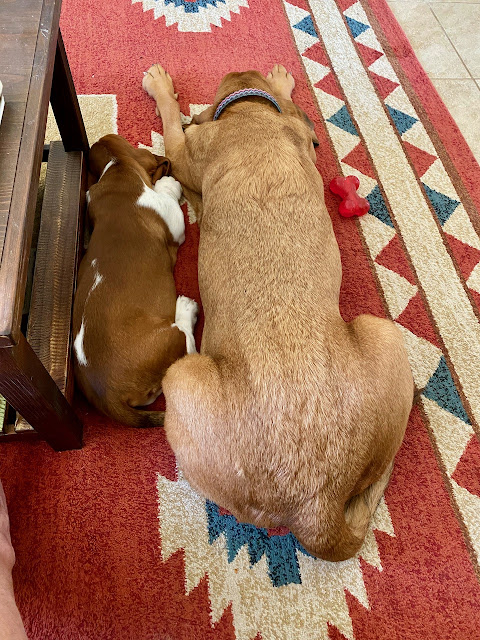 I had all four sleeping in the computer room today but by the time I got back with the camera Heidi, Walter and Stella woke up to see where I was going. I had forgot until I looked at my watch, it was lunch time and they knew it. 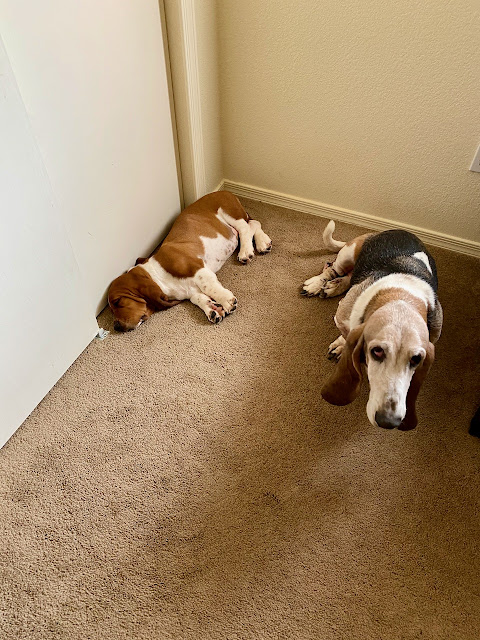 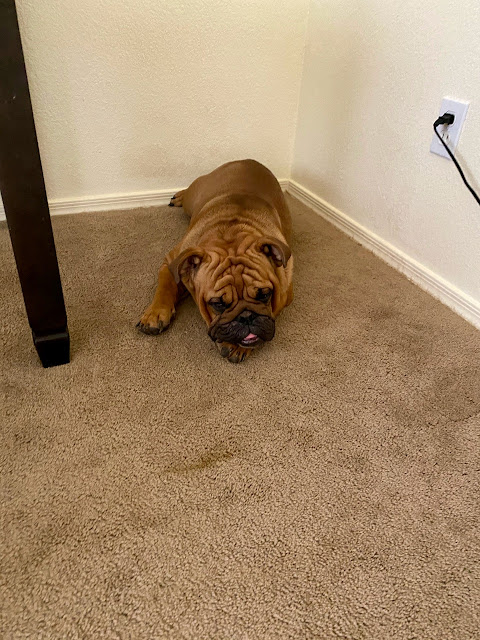 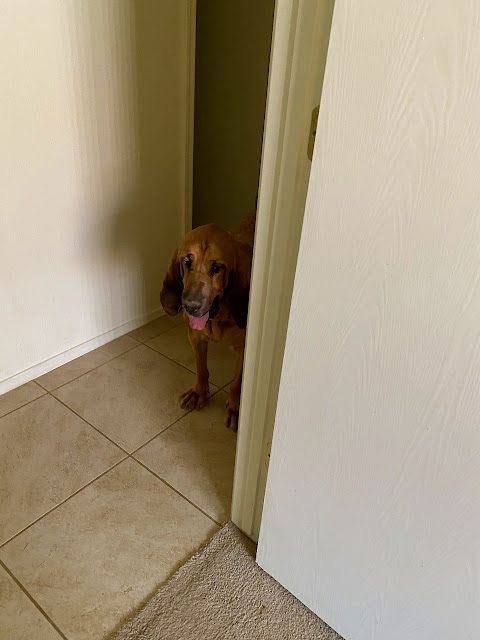 For the third day in a row I have let the hounds and the dog stay outside in the backyard while I am gone. Today I rode for two hours and 45 minutes, so it was a little too long for them to be outside. Too hot. They had already dug into the red clay to cool off in the same spots that I filled in yesterday and covered with rock. As of today this will be the last day I keep the hounds and the dog outside. I have caught the "two boys" digging late this afternoon, so it isn't all Stella that is guilty. She prefers the air conditioned bedroom with the blinds closed anyway. 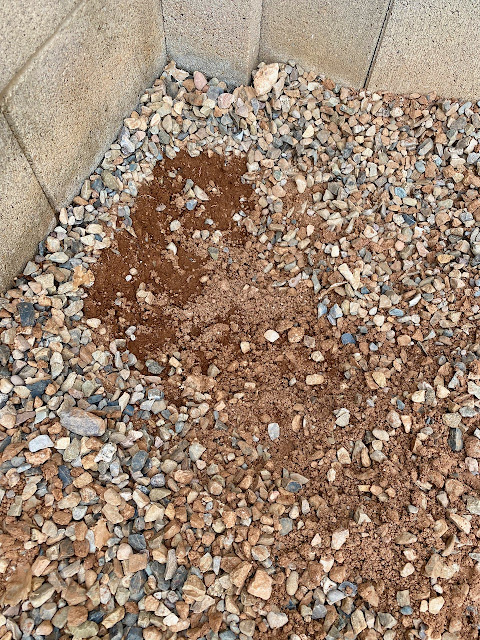 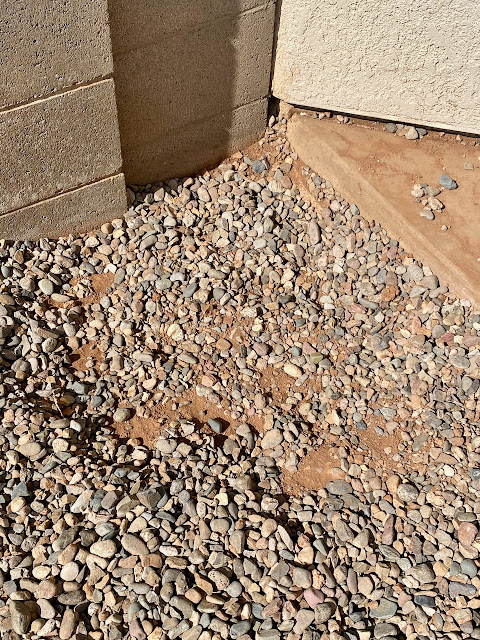 The footprints on the chair is a sure sign that Stella was checking out windows or doors, to escape. 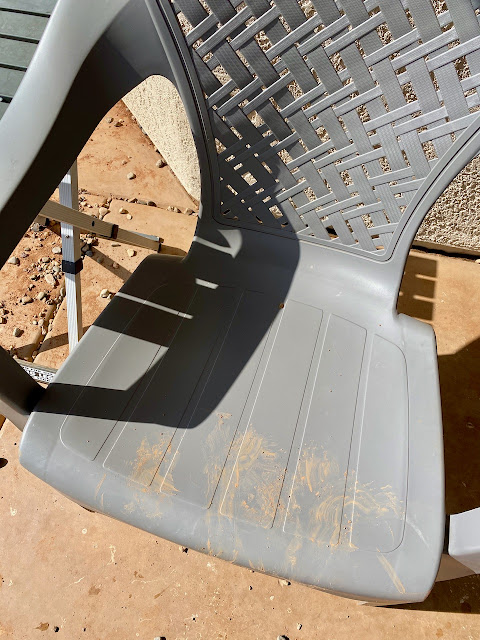 Henry is into to wood. Big tree roots from the past or small pieces under the rock. I will not have my yard dug up and destroyed like I have witnessed next door. Tomorrow morning when I ride, all except Heidi will be gated or crated. 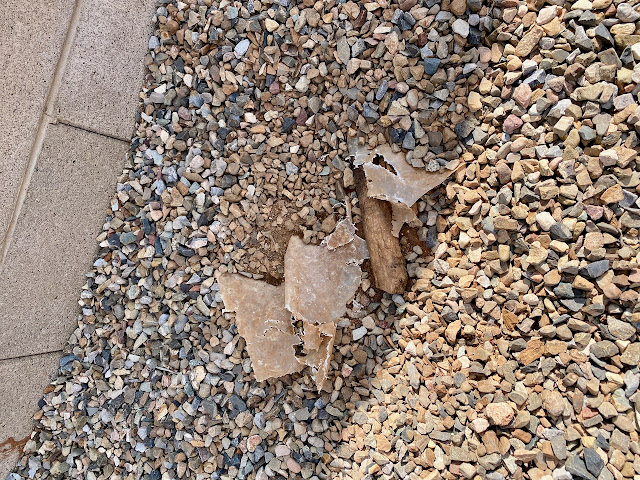 I won't mention how nice the day was, good weather is the norm here. 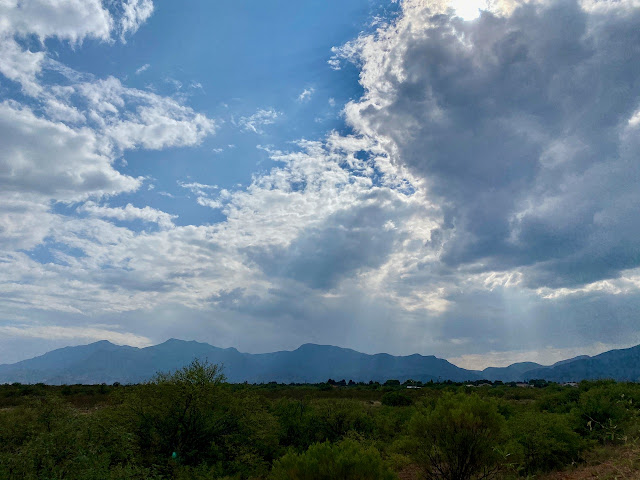 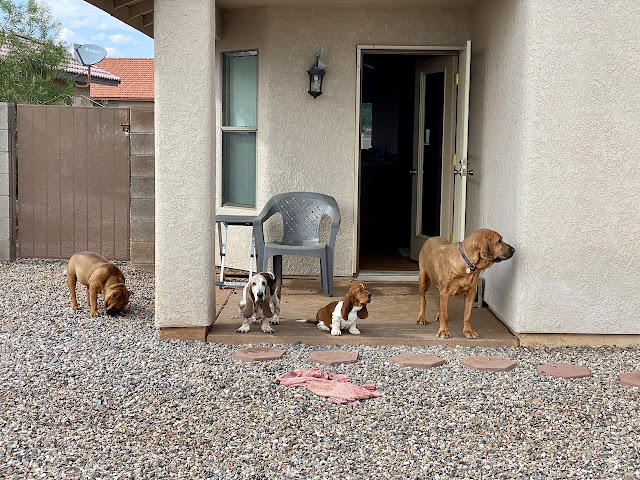 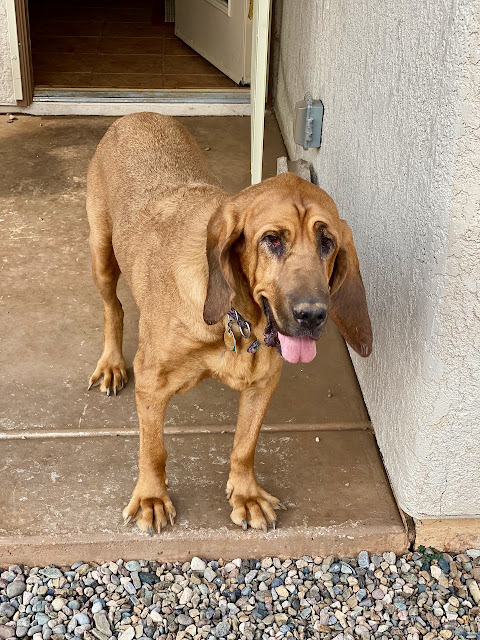 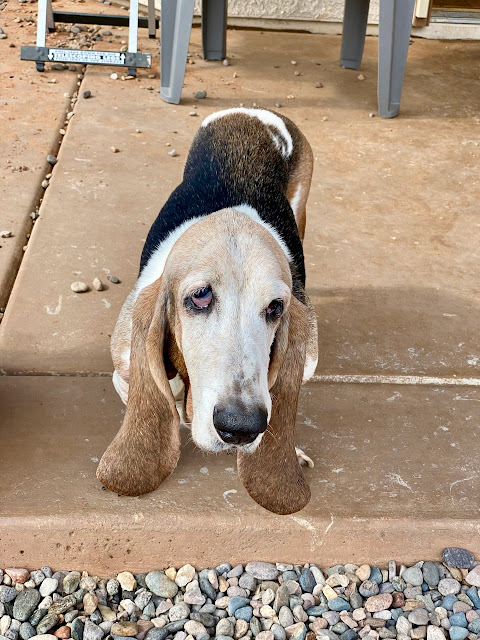 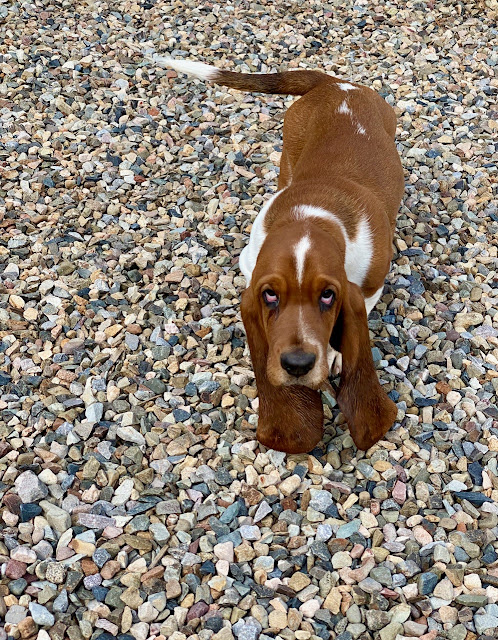 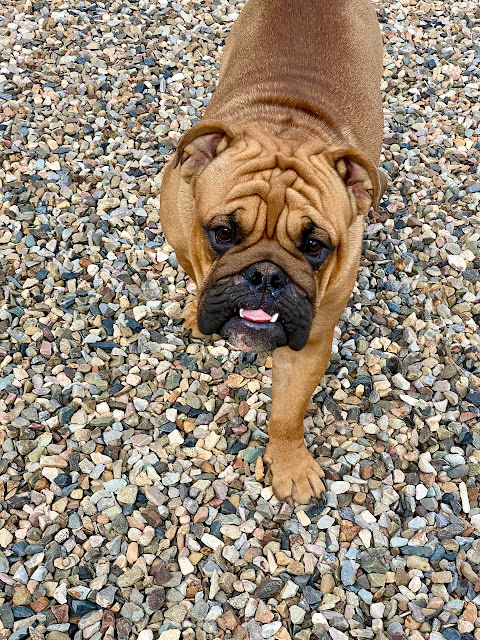 I walked out with my broom for the 4th afternoon in a row to clean the patio, only today Henry wasn't moving. Did you knew the basset hound breed is stubborn by AKC standards? Well he is definitely living up to his DNA. 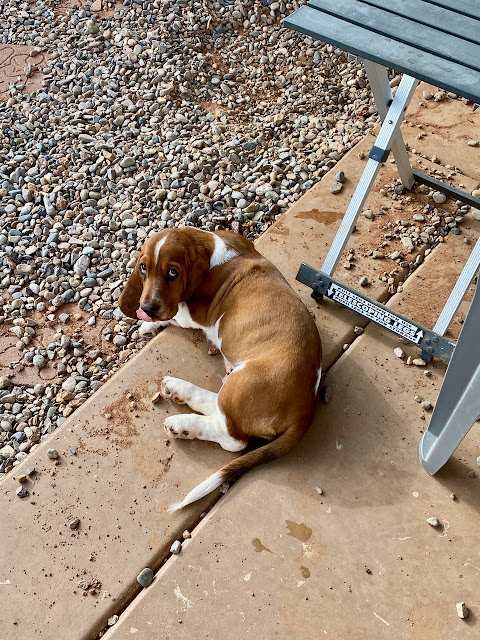 He decided he would watch me sweep the patio from a further distance. 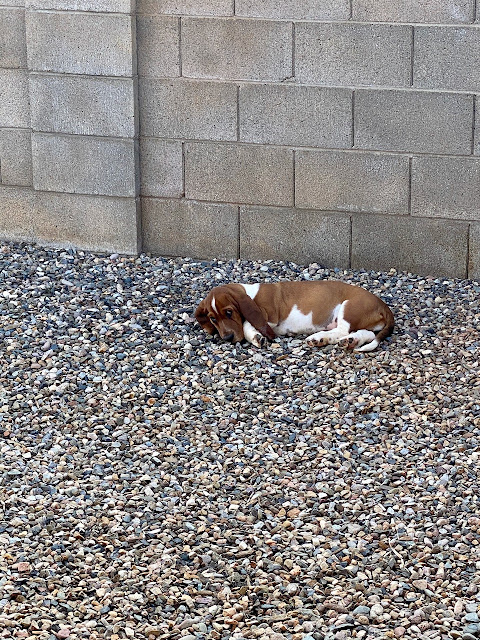 You cannot tell in this photo like I could in person. Bottom half of his ears are drenched with water and any water you see on the tile is from where he walked. 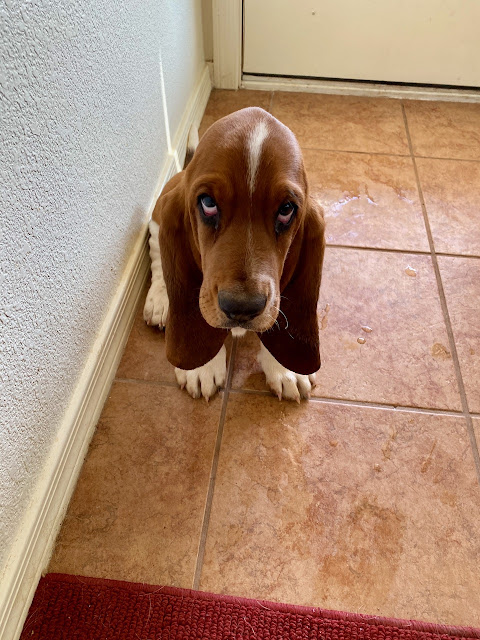 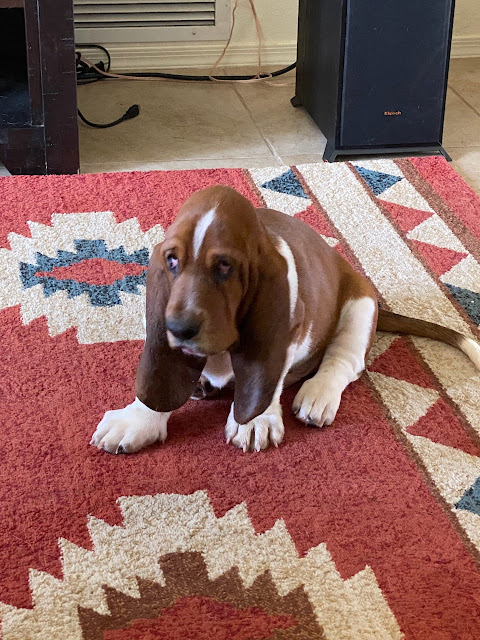 Here Henry is showing me it wasn't Stella who dug the nice round deep hole in the ground like she was accused of doing. I thoght that was a little too clean of a hole and too symetrical for Stella's work. How do I know it was Henry? After talking to the neighbhor I walked around the corner to catch Henry digging in this hole so fast it was like no tomorrow. Caught in the act. He gets the master bathroom tomorrow morning ... plenty of room for him to walk, sleep and he can't dig through tile floors or walls. 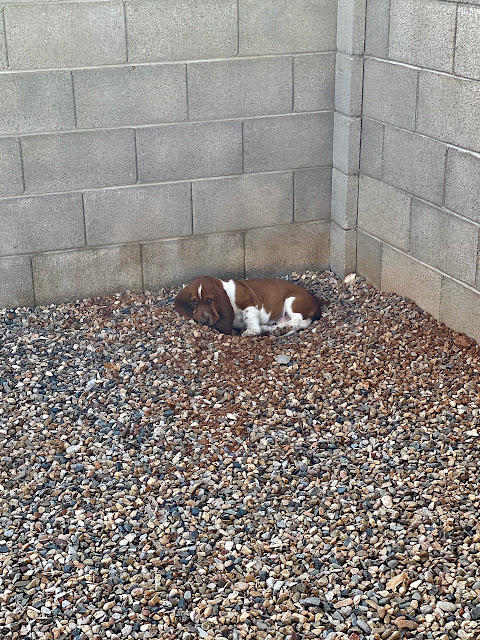 It was so nice this morning and I felt so good riding, I went for 34 miles, climbed 1,140ft in elevation and took almost 3 hours to get back home. I'm afraid that is too much and I'll find out tomorrow although I do plan to ride a short time on the flatest roads possible tomorrow to get the blood flowing.

Will it be steamed veggies with salmon tonight for a late dinner or will I have a pizza delivered?

The hounds and a dog are 'pack animals' so it's not too hard to take care of four of them. It will be on the days their nails are trimmed and their ears are cleaned but in day to day activity, not bad at all. They make it easy for me because they don't fight over food, don't fight when playing and sleep together ... Heidi is in the same room where they sleep, does that count as sleeping together?

Another good day in the 'Wild West'.