The Crate vs The Backyard 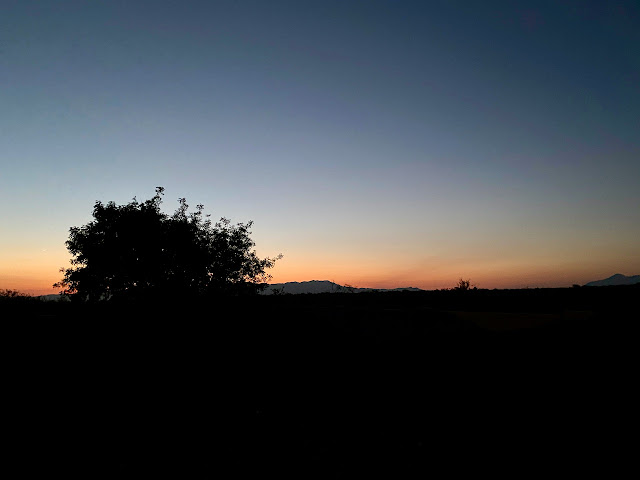 We were up before the crack of dawn as usual. Perfect weather. The hounds and the dog assumed their breakfast table positions as I made coffee. Same routine as always, only today I took all the photos with my iPhone and left the Nikon D3500 on the counter. You are looking towards Bisbee to the southwest of the patio. I could tell before the first drop of the dark roast Columbian coffee that today was going to be a good day ... it was. 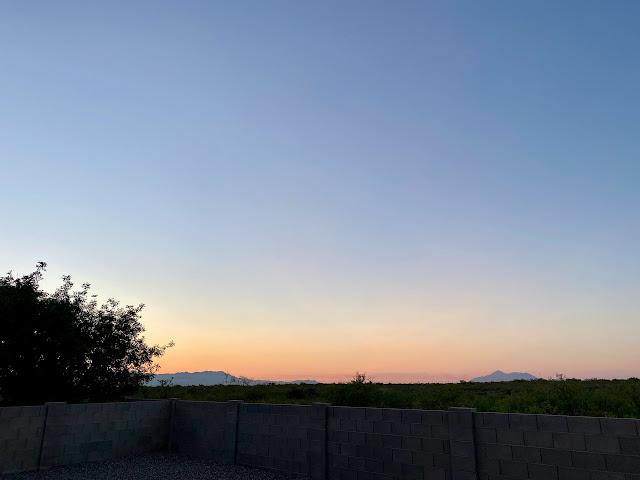 I got my morning bike ride in and left extra early because the temps were so nice, 6:30am. I would have left earlier than that but I needed a little more dayling for safety reasons, not my eyes. 26 miles later I was home a little after 8:34am with good news in my inbox. 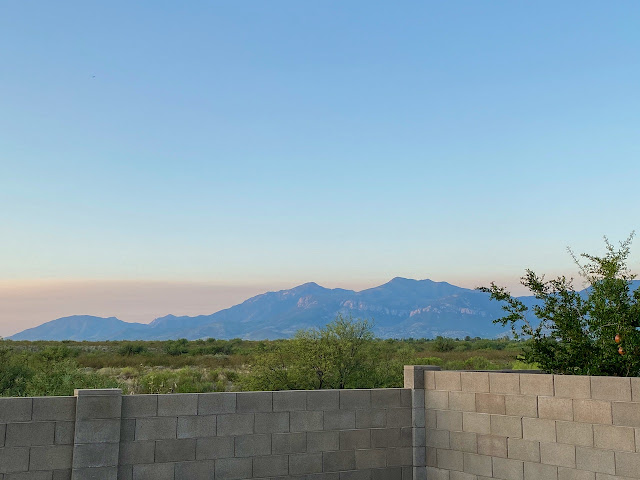 For those that ask, I don't smell smokey air when I ride. Nor do I feel any effects of poor air quality. I am very fortunate to live this far south. I cannot even imagine those in California, Oregon and Washington. I have friends living in all those states. Yet, I had to ask myself ... is that smog like I use to see in California 35 years ago or is that smokey hazy air caught on the west side of the mountains? 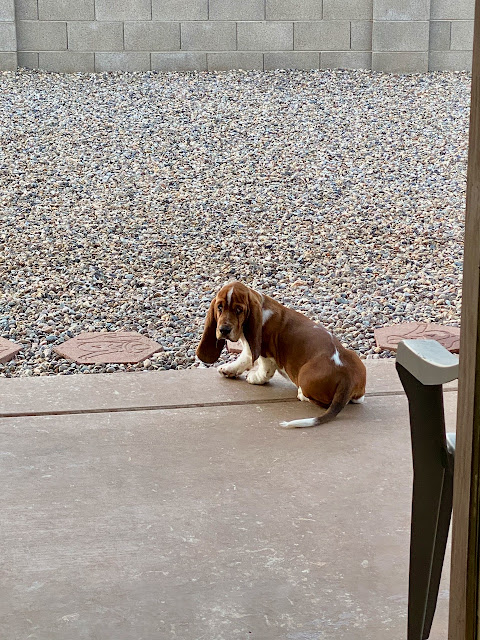 Henry had explored every inch of the backyard by the time this photo was taken. He seemed to feel the air quality was good and I was given the okay to go bike riding. 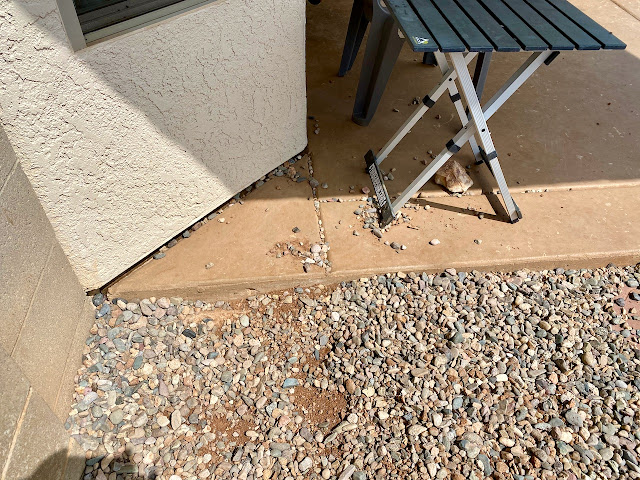 I had a choice where to put the hounds and the dog. With temps cool and no signs of escaping attempts from the other day, I decided I'd try for a second successful trip and put all four in the backyard. Water bowl in the shade, Heidi's bed out on the rock for a soft bed to sleep under the sun and a bunch of their chew toys tossed to the wind to land in various parts of the backyard.
This is Stella's spot to sleep and I could tell by this photo, the dirt on her nose, the pads of her feet and nails ... she had been spending a lot of the time I was gone ... digging. I'm not a fan of digging up a yard .. so her score was -1 for the morning. 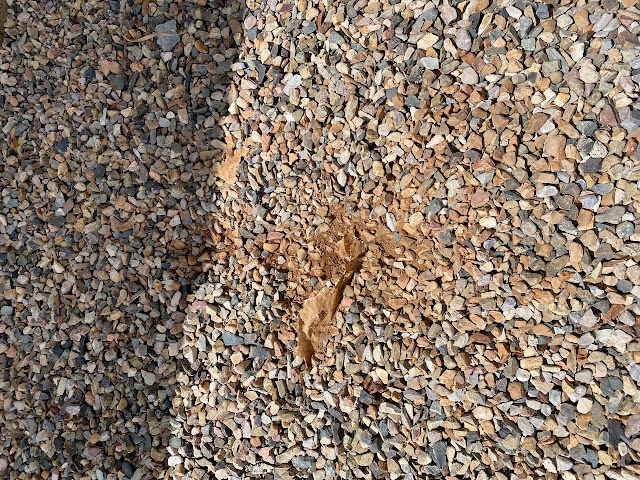 Henry was caught red handed because he was sleeping in the spot that was dug out. He was guilty by association. I hate seeing the underground plastic exposed as it's only job is to keep the weeds out or under control. His score tied Stella for the lead at -1. 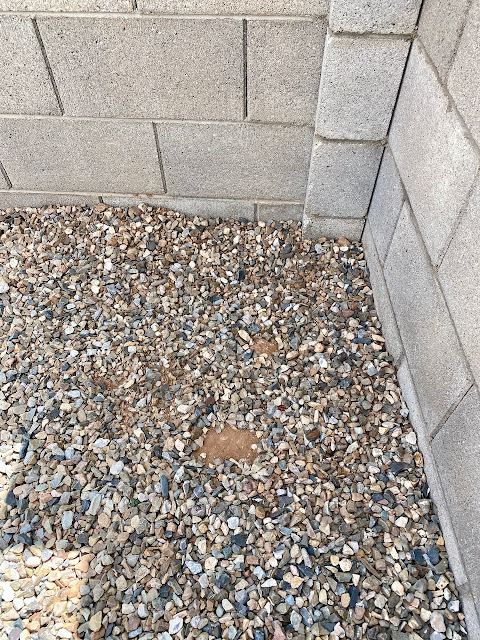 Heidi was out in the corner sleeping. She did not hear me call her name because her hearing isn't the best anymore. She might have helped clearing out the rock but this is also one of Stella's favorite spots so I am thinking Stella did most of the excavation in the corner of the yard. Heidi has the best score at +1 because of all that she probably had to put up with. 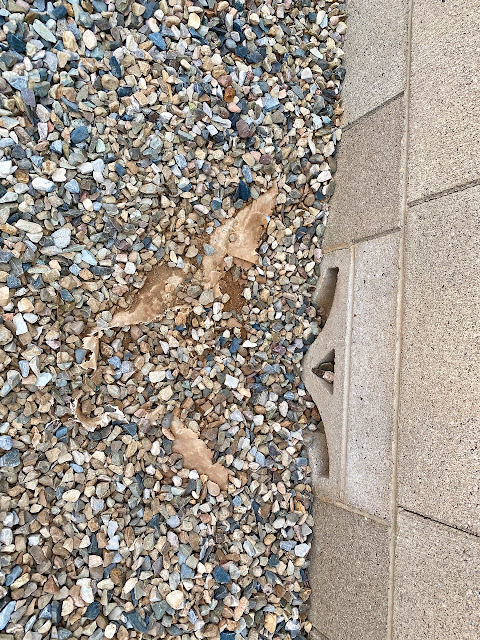 This is a Stella job here. I saw her clearing out this spot before I left, in front of the fence drain, helping all she could for snakes and spiders come into the yard. It hasn't happened in the 15 months I have lived here. It must be all the beautiful landscaping I had put in the backyard that prevents snakes and spiders from visiting the hounds and the dog. 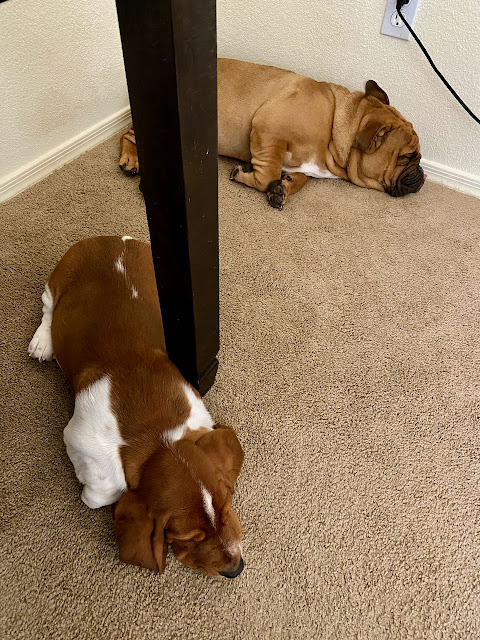 So a few hours later when I had to go to town for some real estate errands, I had a choice to make ... leave them back in the yard to run free, with a warmer sun or crate three of them in air conditioned rooms with Heidi having the house all to herself plus the backyard. I chose to crate them.
Why? All the dogs do outside is find their spots, dig a little and sleep. They don't use any more room outside than they do in a crate. Air conditioned room with the blinds closed is cooler than 89° at 4,650 feet elevation. Even the stainless steel water bowl was hot. They all go into their crates on their own. Only Walter is unhappy out of the three. 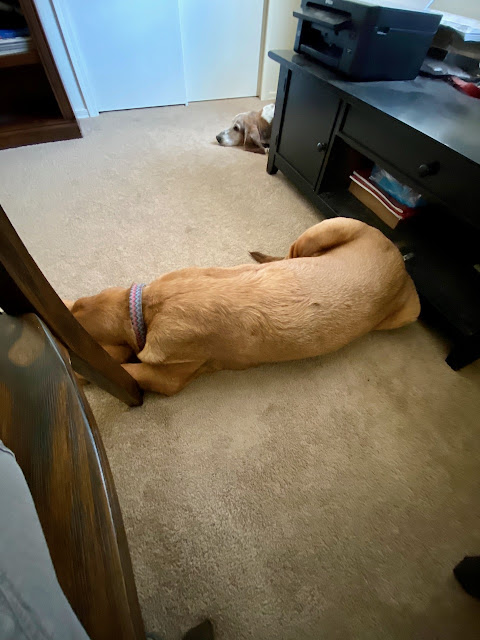 As you can see, they were not too upset about being crated ... when they were let out all they did was find their indoor spots and go back to sleep until their lunch was served while I unpacked groceries. 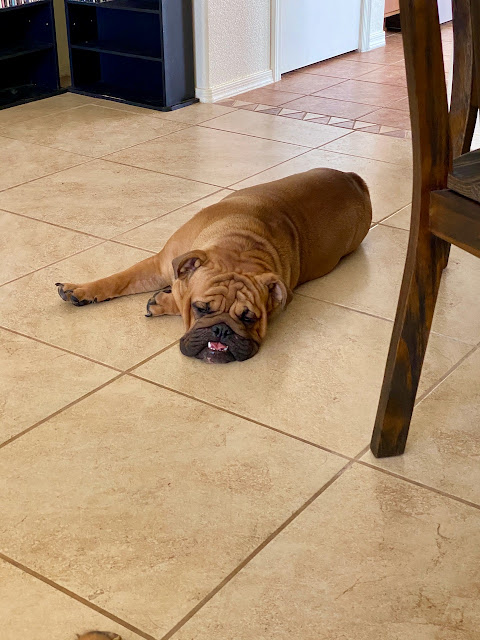 I had a nice long afternoon phone call with my old college best friend back in Indiana. We did a little Facetime only by mistake as neither of us figured out how that was turned on. I never use it so I am accusing him of turning it on. While we talked on the phone ... the three hounds and continued to sleep. Their meal was served after Stella started her bloodhound baying ... it was almost 3pm. Either both of us are going insane or just getting older. I am not the only one that has these weird thoughts ... I had to ask him. 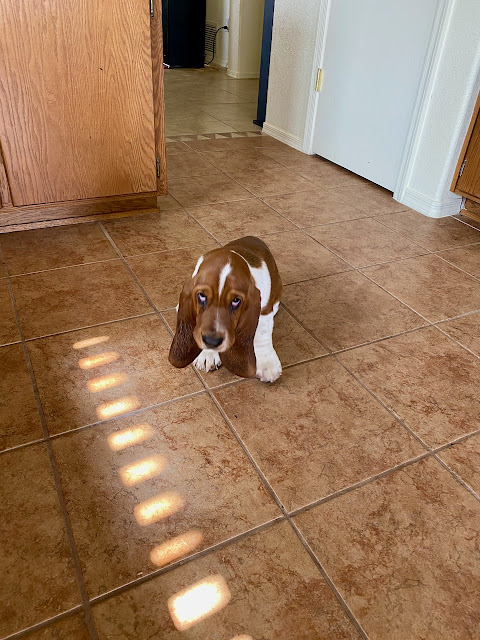 My friend is not a dog person although he does pet sit his older son's boxer sometimes. So I am sure he finds it hard to understand me having one dog let alone four. I told him I always felt the same way about biology and chemistry in school. It was easy for him, not for me. It didn't have a score at the end of the game. That five credit hour biology class was a requirement for my accounting degree centuries ago, otherwise they would have never seen me. 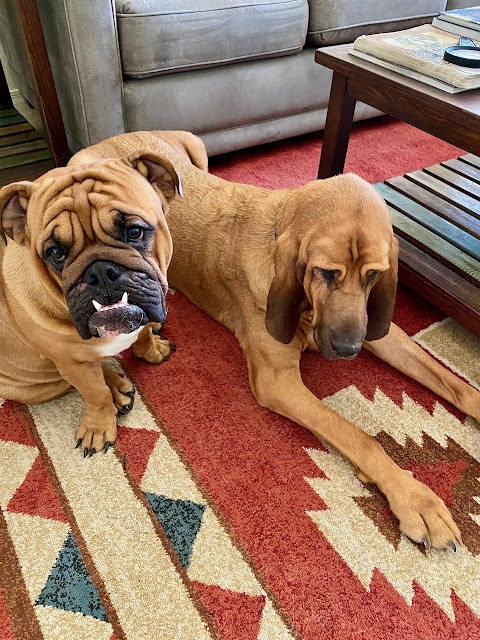 As I went to bed last night, the real estate fiasco that I caused needed some key documents signed and my payment to the agency that listed the house, to bring the deal to a close. When I returned from my bike ride this morning, I saw when I glanced at my phone, progress had been made. It wasn't until I was in town when I got the best email of all. The title company had sent a letter to all those involved stating the deal to sell my house had been officially canceled.
The three hounds, the dog, and I are good to go ... enjoying the mountain views, having coyotes wake us up at 4:30am and I have the best "start finish" location in town for my bike rides. Of course the german shepherds down the street are loud protectors but I have noticed since our talk and the possibility of my house becoming a rental ... there is some obvious effort being made next door to control their doberman puppy. It's been pretty quiet lately. 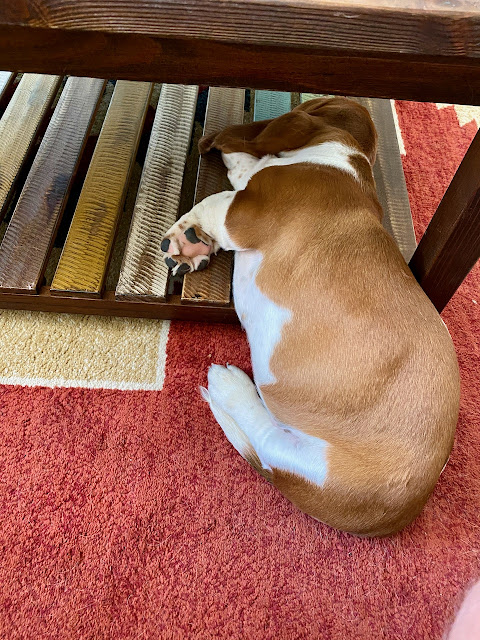 Henry continues to amaze me. He will sit at the closed patio door waiting for me to open it when he needs to go out. Although ... he is the first puppy I have ever had that likes the corners of rugs. The living room rug, the rug under the water bowl and he found I had rugs in the bathrooms. Not only that but he loves sliding the empty steel dog bowls across the tiled floor for the loudest noise possible. I think he thinks that food should be available at all times. 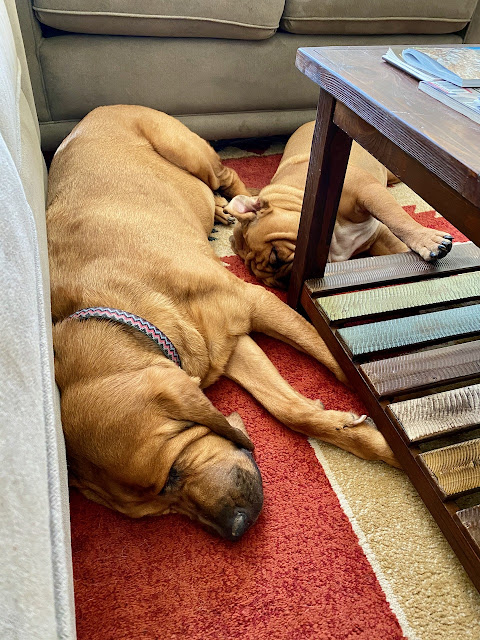 Needless to say it was a big relief to get the real estate fiasco behind me. Only one thing left to do that is out of my control. The buyer's lending company has to send me a payment link so I can reimburse them for the house inspection and appraisal. That I would think would show up in the next few days. I feel very fortunate this turned out the way I wanted although my billfold is a lot lighter ... but like I told a friend, if I had not spent it on this I would have found something else to spend it on. Let's just say my "car/vw habit" is a little low on the balance sheet.
So as I post this I am a happy home owner, Walter is snoring out in the hallway, Henry has taken Stella's spot in the computer room, Heidi is back in her bed and Stella has moved to Heidi's corner in the computer room ... all in a deep sleep.
There is more time left but as I post this ... it's been a pretty good day here in the "Wild West".
at September 16, 2020