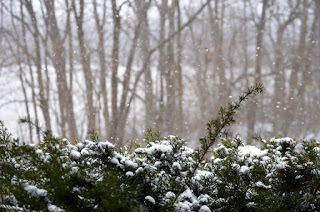 It's one of those snows that you can 'hear' how soft the snowflakes are. No wind, temperatures not really freezing cold to you until you see on the thermometer it's below 30°. It does not matter what the weather is to the hounds, unless it is some really hard spring rain ... but snow, not a problem. They do what they do every morning on our first trip outside when it's daylight ... noses to the ground.

I'm hesitant in taking the walk today simply because I don't want get away from the house, see a hound raise their paw to let me know they can no longer walk and need to be carried ... just because snow and/or ice is frozen between the pads of their feet. Stella felt light the other day when I carried her back to the house ... but Sadie would be out of the question, she is that big, that heavy.

We have walked in deep snow before in past years. I remember some of the basset hounds I had would walk first and create the path. The snow would be taller than most of them. My first basset hound, Harry, was famous for making paths up in the snow in Breckenridge Colorado, on the daily walk.

This was about the only thing they did this morning and it wasn't long they were ready to head back inside for a little wrestling, bone chewing and a nap. They have to conserve energy for lunch. You never know what the afternoon might bring. 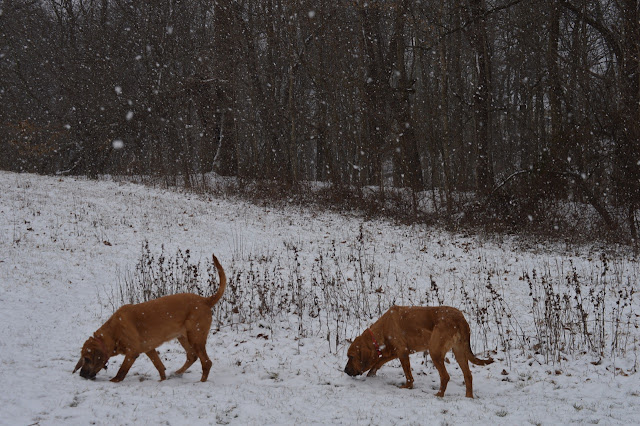 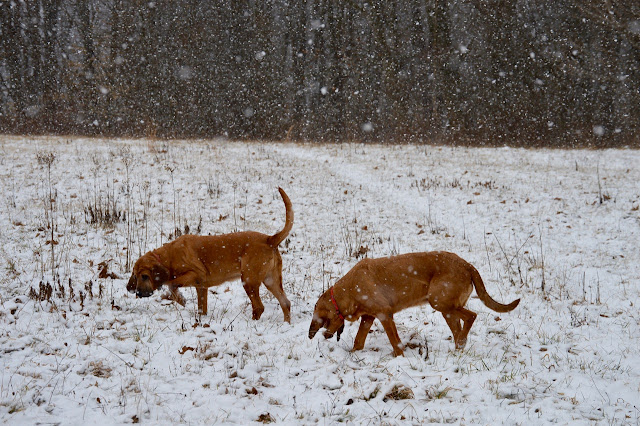 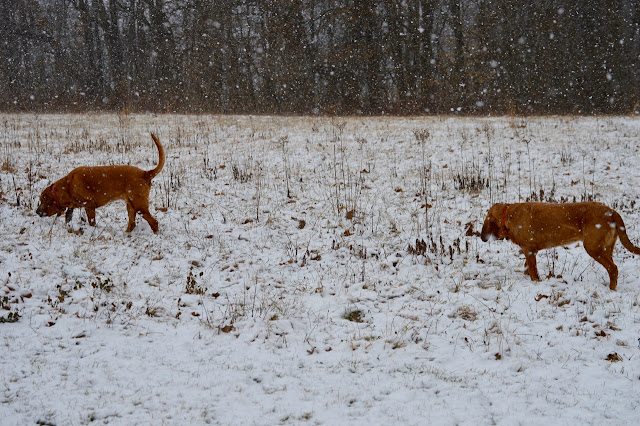 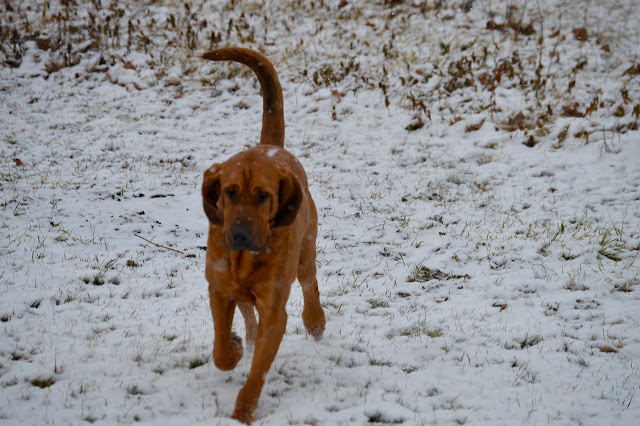 It was sometime around 1:30pm and I was getting a little touch of 'cabin fever'. It didn't feel that cold outside. All three of the hounds went out after their lunch but now were sound to sleep. In fact Sadie was already in her "snoring mode". With no wind and not a freezing feel to the temperature outside I decided it was time to wake the hounds up - minus Heidi - and see if they wanted to go for a walk. Their answer is always the same "Yes!!!"

It didn't take them long to get in stride and check out what had been in the area last night. 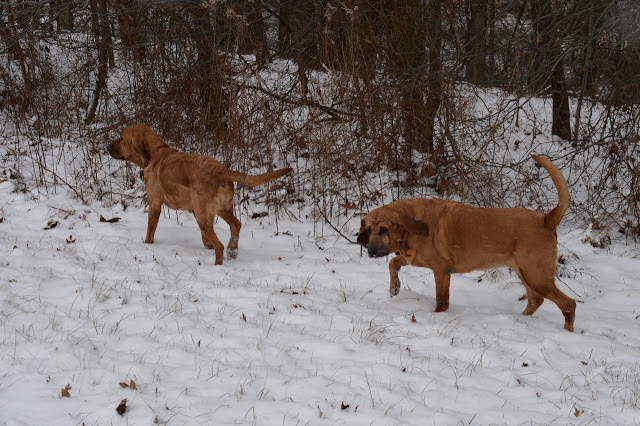 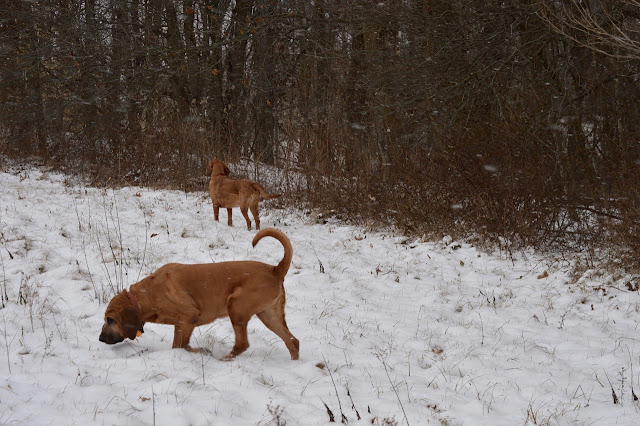 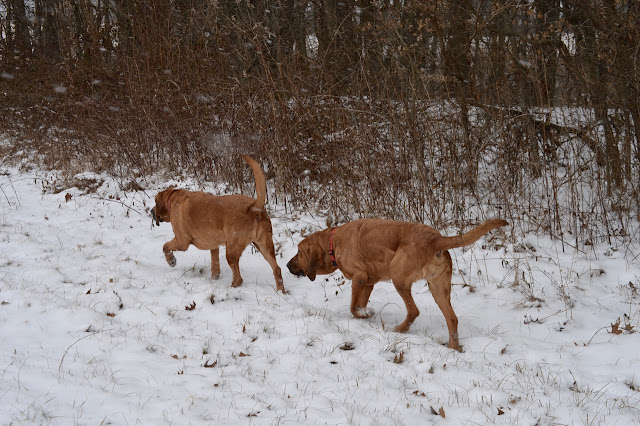 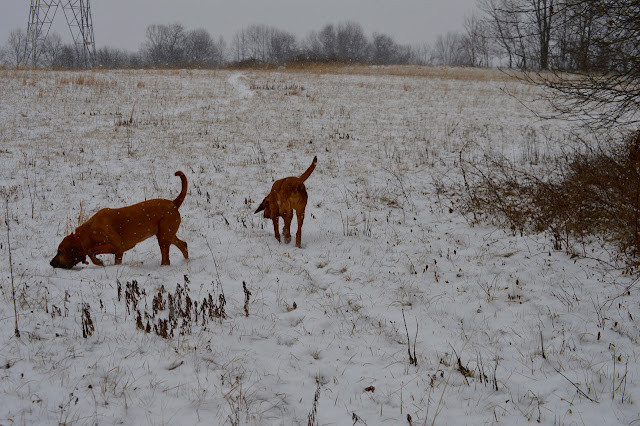 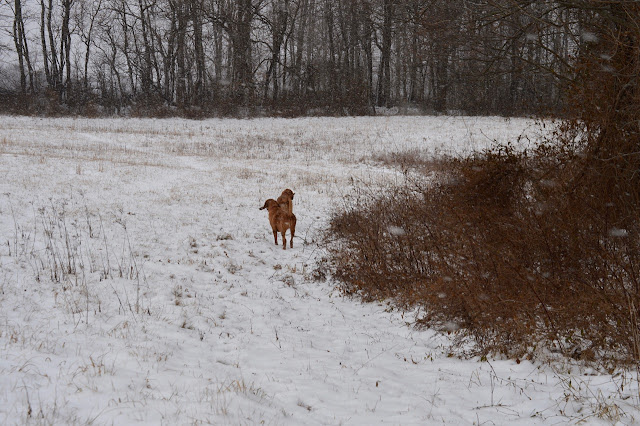 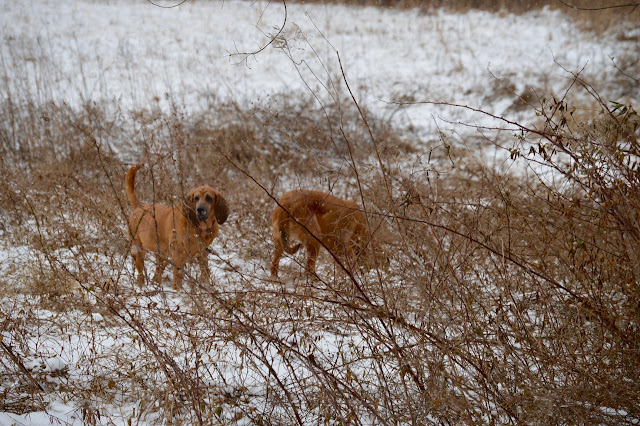 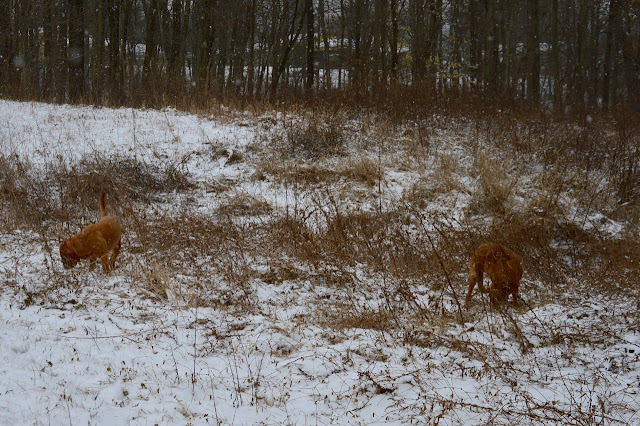 They like to spend a lot of time in that mashed down brush area and I am sure that is a favorite spot for the deer to be hanging out. It's becoming hard to pry the hounds away from that area. Stella headed off for her other normal stop. Stella and Sadie found something pretty good hid below the snow. Stella realized that I was not going to wait on her to finish whatever she was doing. 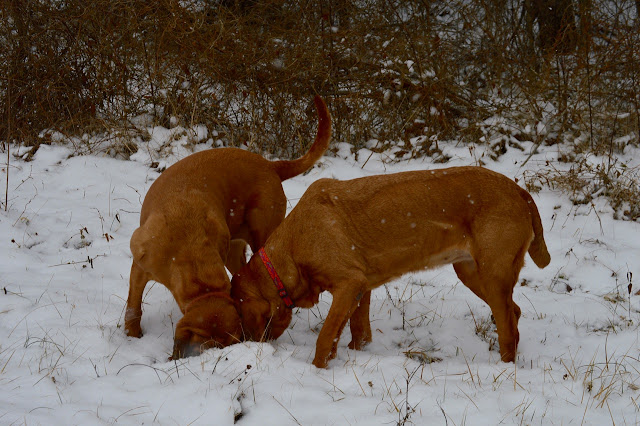 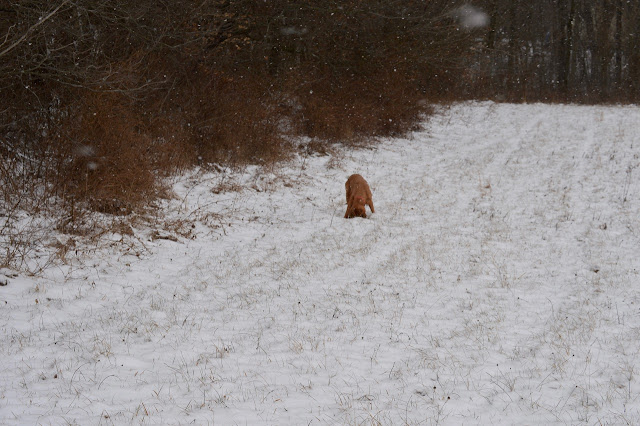 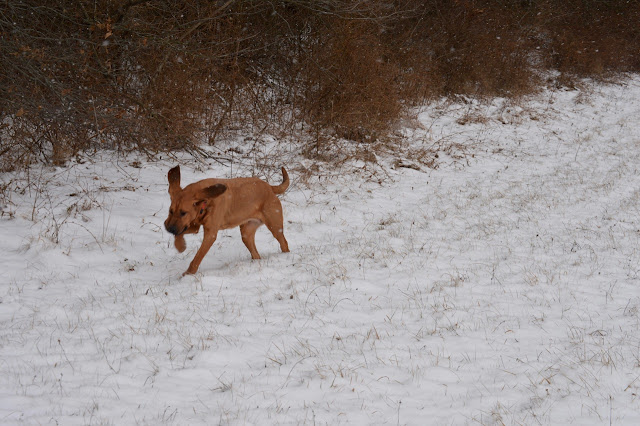 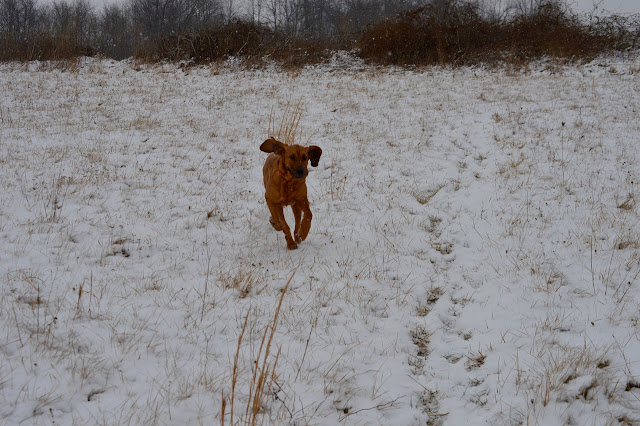 About the time Stella made it back to where Sadie and I were standing, Sadie decided it was time for a break and thought while she had the chance she would be the one attacking Stella instead of the other way around. It didn't take long before Sadie let her have the upper hand in the battle. 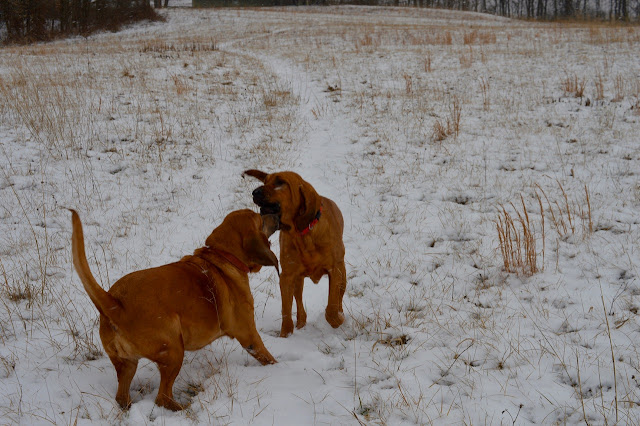 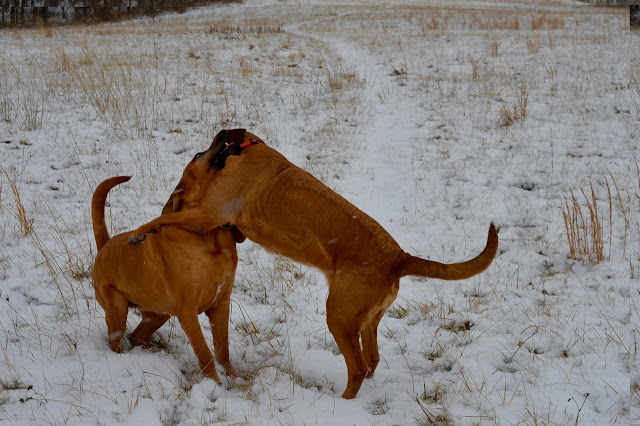 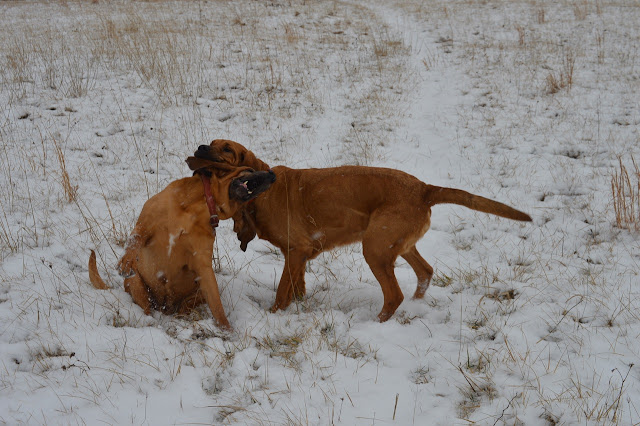 As usual, just like that, they stop and take off for the house. 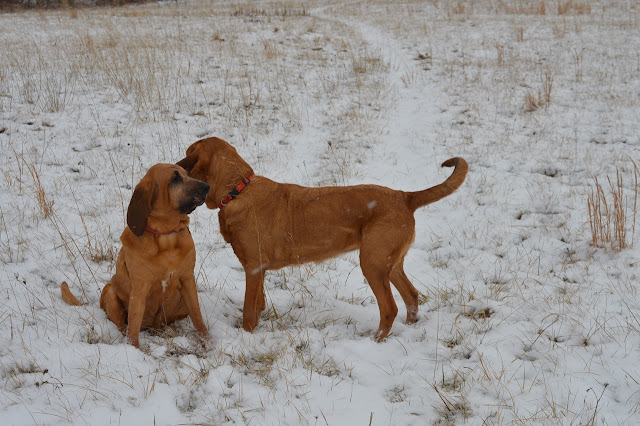 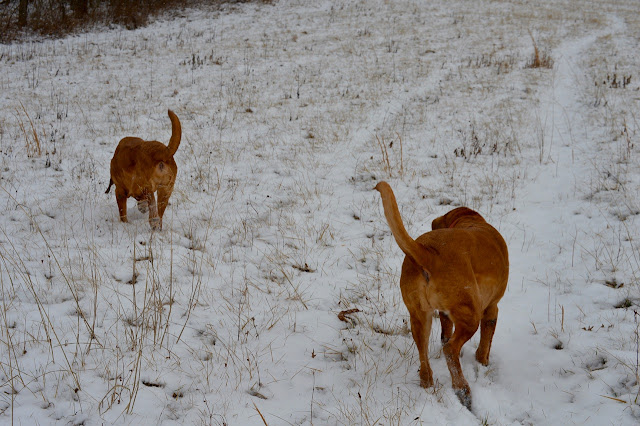 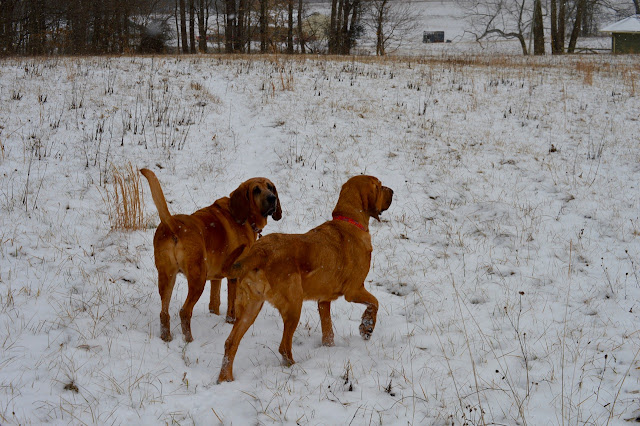 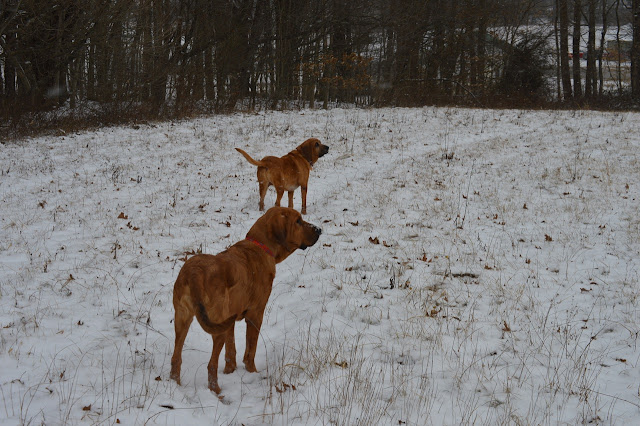 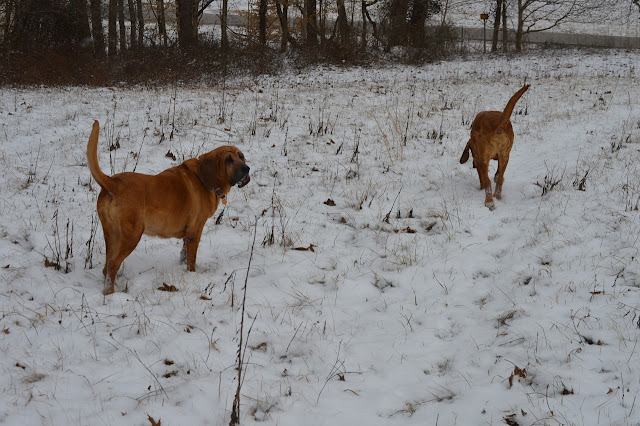 I'm thinking there might be enough time left this afternoon for a short siesta to prepare for tonight's viewing of college basketball games. Life is pretty fast paced in the winter months.

Another great day of retirement here in 'the tropics' of Southern Indiana.
at February 09, 2016
Email ThisBlogThis!Share to TwitterShare to FacebookShare to Pinterest
Labels: Bloodhounds Playing, Sadie, Snow, Stella