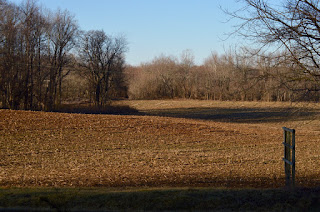 It’s beautiful here this morning. The temperatures have dropped into the high 40’s but it feels good outside with just a jacket. The hounds and I kind of took the day off yesterday after posting about Stella’s separation anxiety. That post brought a lot of ideas and thoughts in my email inbox. A few good ideas in the comments here. Even one very long phone call that started with Stella and ended up with Heidi as the topic.

I just realized looking at the title of this blog post — It’s NOT Monday!!! It’s Wednesday!!!  LOL

Doesn’t matter, I still have some new ideas floating through my always active brain cells. There is nothing major with those ideas, nothing life changing. Just a lot of thoughts that get through my filters that cause me to pause and really think about them.

Last night I spent watching not only my IU team shock their fans with the basketball game in Ann Arbor MI, but also watched another game after that one. That 2nd game didn’t start until after 11pm local time.

Trying to decide where I start today … different subjects are going to be covered in this post, I can tell that already … from Stella, Heidi, to blogging, and even WordPress vs Blogger. I might end up throwing a few other one liners in the mix also. 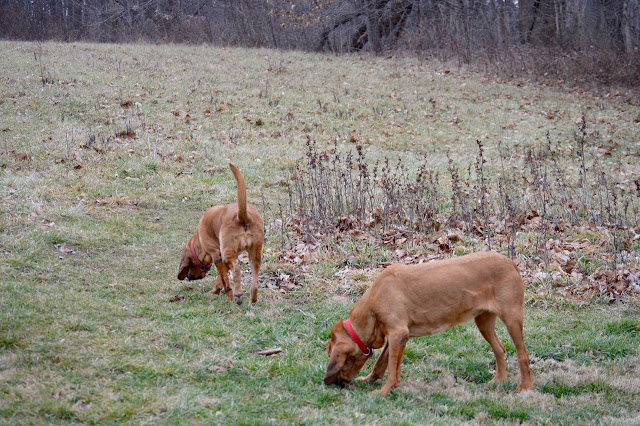 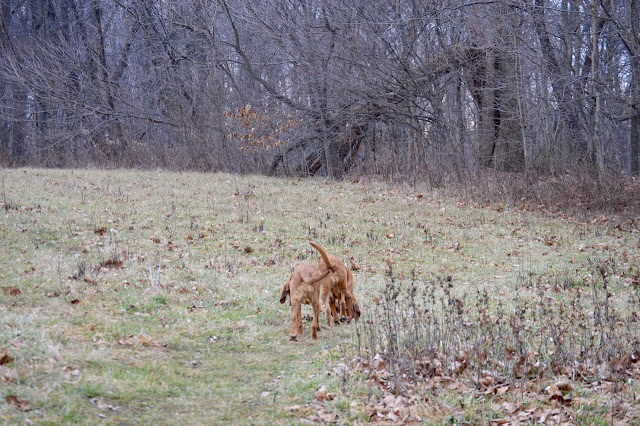 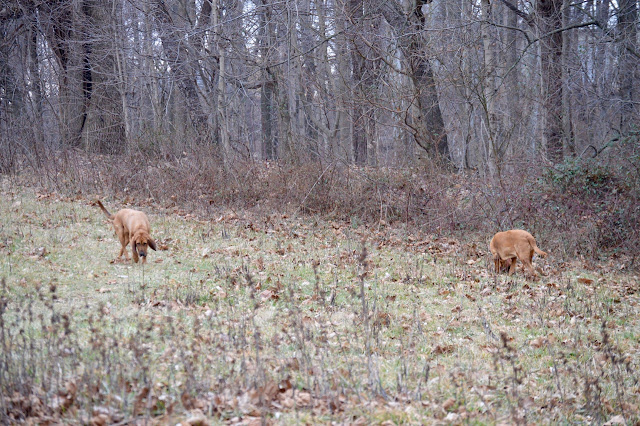 I’ll start with not online blogging .. but the negative side of blogging.

When you decided to leave yourself open to all kinds of opinions from people you have never met and probably never will in most cases … there comes to a point in time where you ask yourself is it really worth blogging publicly? Can a blogger get the same satisfaction and reap the benefits of writing, in a ‘private’ journal?

In a strange way, I think of blogging at times as if I am standing down by the busy US highway in front of my house, passing out a book with descriptions and photographs of my life to every passing car and truck … Very very few of them do I personally know. That's the way blogging seems to me at times. Strange??

Over the past couple of months, my email inbox seems to be seeing an increase in emails from the anonymous readers to the experts in all areas of life. They like to let me know exactly what I should or shouldn’t do in my life … from the hounds to retirement living. They have all the answers and don’t hesitate in voicing them.

I’ve never been one that puts up with a lot of crap and I usually discard it as useless and move on. At times I feel the same way about blogging. I’ve followed my own ideas, my own path from a very young age and will continue to do so, always. Let’s just say that when I get tired of putting up with the negative side of blogging … is when I think of going into settings and clicking that box for “private”.

That’s where I am now.

By nature I have always been a private person. I even debated with myself in 2011 just what and how much I would write about. Like anything else, blogs change over time, following a different direction as it sees as the correct path.

Today, I am not sure which direction that path is going to be but I am fed up with some aspects of blogging. 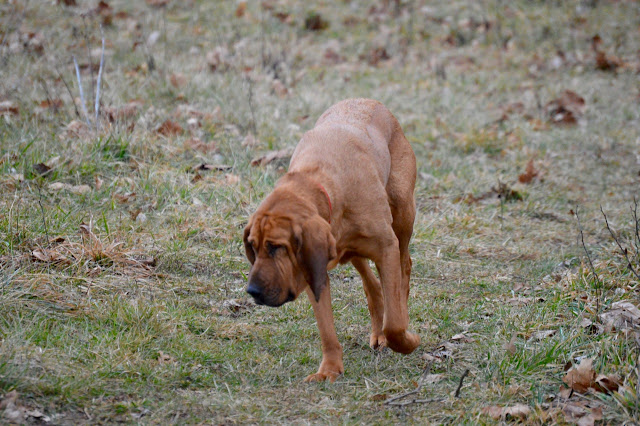 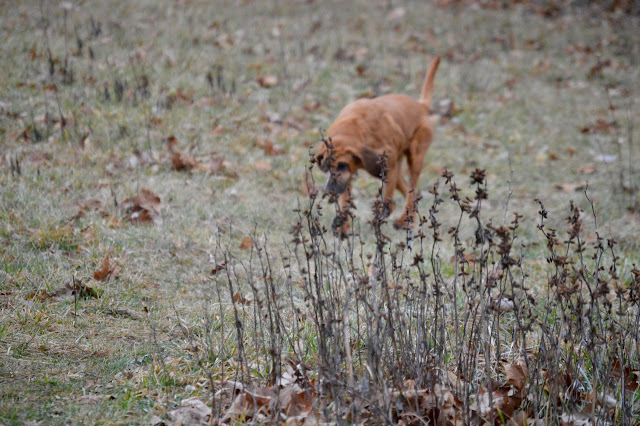 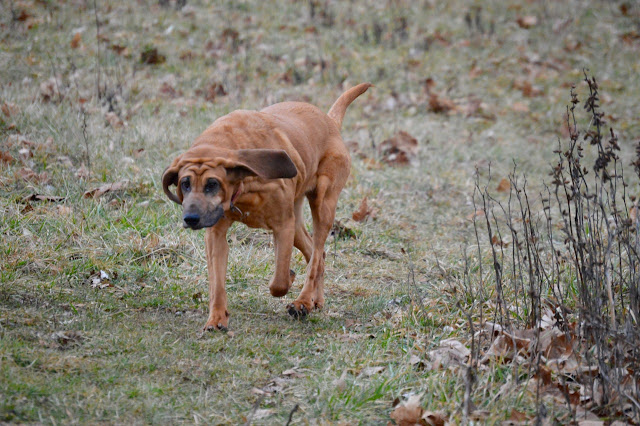 Now onto a lighter subject but heavily discussed.

A lot of good ideas about Stella. Some of them are going to be strongly thought about and tried, others have already been trashed. It is interesting to wonder what is her ‘trigger’ point? A question came up yesterday … is it really separation anxiety or does Stella just have a case of being claustrophobic?

I had never thought of it that way.

I do know when I did a test with her in my very small bathroom yesterday and the door closed with the light on … she was howling like never before. She was very upset and very happy when I opened the door. Yet when I did the same test with her in the bedroom, a place she always stays when I am gone, with Sadie beside her … she was perfectly quiet. I even walked outside to listen for any barking or howling. There was none.

Yes, Stella is left with every bone and every Kong ball possible, filled with either peanut butter, cream cheese or a dry dog treat … hopefully to keep her from becoming bored. You have to remember though, there is another bloodhound in that same room following the Bloodhound Property Laws and thinks those same bones, Kong balls and food are just as much her’s as Stella’s.

I don’t know who wins but when I return home, all of those scattered bones and balls are all in one neat pile … as if one of them were protecting “their” stuff.

After 30 minutes, I glanced in the window from the outside of the house … she was sleeping next to Sadie. Whereas Monday night she was digging her way out of that same room within a 12 minute period.

There will be more reading today, more tests and a few ideas readers suggested will be bought and tried. I will continue to leave her alone in that room with Sadie and slowly build up the amount of time I am gone … to see if we can get back to where she was before November 22, 2015. 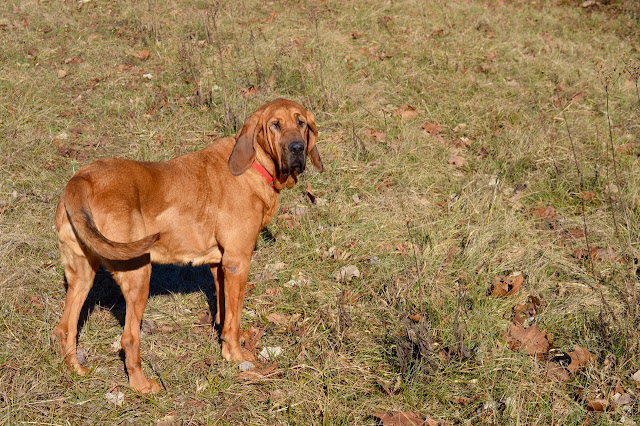 Heidi is a different situation. Four different vets have not been able to figure out what is going on with her in the past 16 months. Different dog foods have been tried from grain free to kibble with rice and barley. I basically can say that everything has been tried except canned dog food, raw dog food and Purina Dog Chow.

Based on dated photos, and a daily record on an Excel spreadsheet … it is not a seasonal issue with her skin, here in the country. A few readers plus some local friends agree that it is something physical, and possibly emotional.

On the negative side of blogging that I spoke of earlier … one particular email received recently accused me of abusing Heidi. I think one of her comments were “she is nothing but skin and bones and that proves to me she is being abused’. Those are the people I would LOVE to meet face to face.

It is also when I really wonder if blogging is worth it.

Once the weather gets warmer, I am going to try some things with Heidi and see if I can get her back to her old self. As far as the food, it will stay the same. Also, no medication will be used just like I have done since May 2015. She is going into the vet this week to get her thyroid checked, as that is something I have not tried and was suggested at the vet office.

She is happy though. She is back to sprinting around the living room when she comes back inside after her first trip of the day outside. She has even added some afternoon sprinting … but only if it’s sunny. 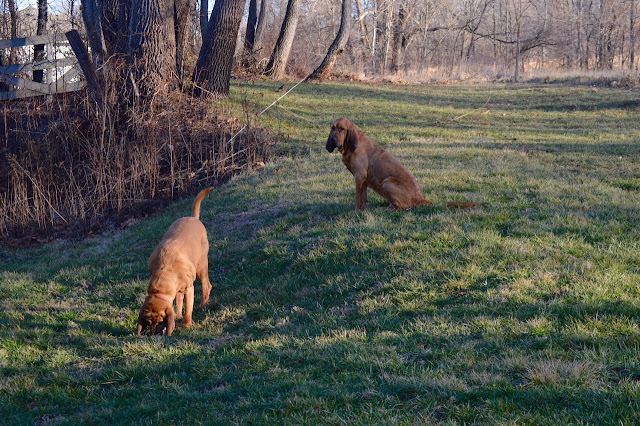 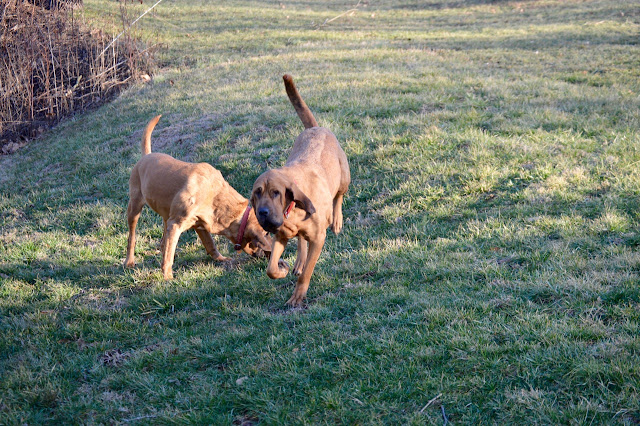 It’s already been almost 3 weeks since I moved from Blogger to WordPress. That included a week where I moved from the ‘free’ side of WordPress to the side where I needed my own host for the blog. That host will have to be paid monthly or I could pay a year in advance … low-cost really for all that it does.

I read all the ‘pros’ and ‘cons’ of each blog platform before making the move. After 3 weeks I have come up with some of my own. I still am undecided.

I like working with WordPress. I like all the different themes I could and can choose from. I didn’t like the fact that I didn’t have the options to change EVERYTHING that I wanted on the free themes, unless I paid for the WordPress Premium Package. The templates in Blogger are plain, old-looking but even being free, I could change everything with my own design … without being a computer geek that can write code or change the css.

The dashboard is similar to each. I haven’t found anything plus or minus with either Blogger or WordPress. With choosing a paid website host there is more work to maintain the blog, with adding plugins to not only get your site work but also protect your site from being hacked. Being a website on your own server has more chance of being hacked into rather than a free blog on either platform but on their servers.

I do know that both of my blogs, like all of yours, are constantly being “attacked” looking for the unlocked door so they can get in.

I mentioned a few weeks ago and some readers agreed with me, that the photos were much sharper and clearer on WordPress vs Blogger. They also enlarged to the original size on WordPress.

That was until I moved from the ‘free side’ of WordPress to the side of my own domain and server, using the WordPress platform. I then noticed my photos didn’t enlarge as big as they did on the free side. Also, the quality was no longer that sharp, clear look that WordPress showed before. They are right now the same quality as Blogger.

In the Photo Library or the “Media Library” as WordPress calls it … I like the way the most recent photos uploaded are on top. What I don’t like is they import the photos out of order. That is hard to work with when you want a certain order when posting the photos on the blog post.

On the Blogger side, I don’t like that all the recent photos are moved to the bottom of the screen. In some cases that is a lot of photos to scroll through to get to the ones you want to post. Blogger does post the photos in the order you chose them and they also upload the photos in order that you export them. That is something that I really like and put as a priority.

Currently I am not sure I will stay with paying for a self hosted server. I am not even sure I will stay with WordPress. Because of that indecision, yesterday afternoon before I started watching basketball on tv, I moved my Blogger blog to ‘private’ status, then I started and completed late last night, copying and pasting all 33 new posts from WordPress to my old blog. That also included uploading all the required photographs.

Maybe not. I found that there was a converter needed even after exporting your WordPress blog file and before importing that same .xml file into Blogger. That converter was no longer available and many websites that had that converter were no longer in existence. One forum tech rep, suggested copying and pasting all the posts you wanted to move IF you had the time. I have nothing but time.

It was faster to do than I thought it would be to finish and I even fit a little over 3 hours of watching college basketball games last night, before I finished the job.

IF I decide to move again, there will be nothing announced nor anything that YOU have to do … I’ll just redirect that new .net domain to the servers on Blogger. You will click your bookmark or favorite and the old blog will show up … updated with all the WordPress posts.

But then again … I might change the template design on that old blog also.

After all, “A new week brings new ideas” … even if it is Wednesday (hump day) !!