It's Cold But We Walked The Field 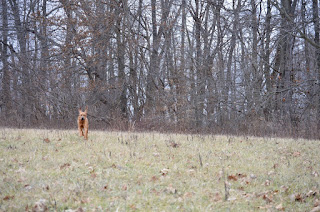 As the temperature dropped near freezing, we still had time for a walk this morning - Mountain Hardwear down parka w/hood, gloves, camera. Someone mentioned it was hard to tell Sadie and Stella apart in the photos. I agree, so I am going to put the pink John Deere collar back on Stella. It fits better than the red one I found in a drawer and it will be easier to tell them apart, not only for you but me as well.

Of course I didn't think about before this range of photos. A couple of ways to tell the difference is, Stella's collar is bright red, Sadie's is faded red. Stella has a distinct black streak in her tail and Sadie does not. After this post though, just look for the pink collar on Stella, it's the collar she was wearing when I brought her home.

If I feel cold, then it's cold not only for me but Heidi also. She has been outside twice this morning but nothing was photo shoot quality. She also likes to walk under Sadie toward the water bowl and guzzle non-stop as Sadie sits above her and watches ... giving her the stare down this week. Water protection seems to be Sadie's theme of the week. Where Stella will come to me to move Sadie out of the view of the water bowl so she can drink water from that same bowl, Heidi doesn't care ... it's her water too.

Another successful walk this morning with Stella leash free. I had to say 'no' once, she came running toward me. Another time I had to remind her we were "going home" and she changed direction and headed back on the path with Sadie.

We were just outside with  no plans for taking a walk since it was early. Once they knew we were going for a walk, they came running toward me. 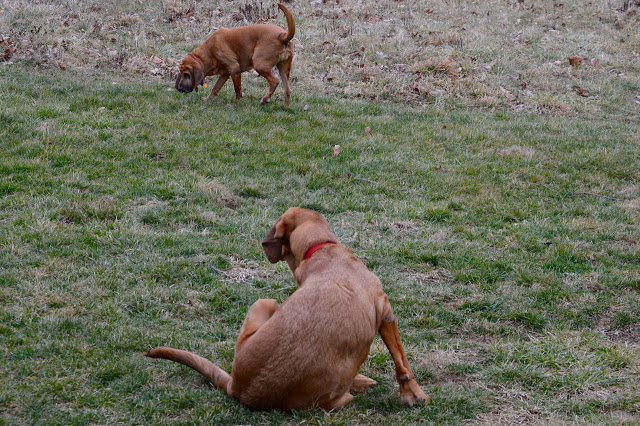 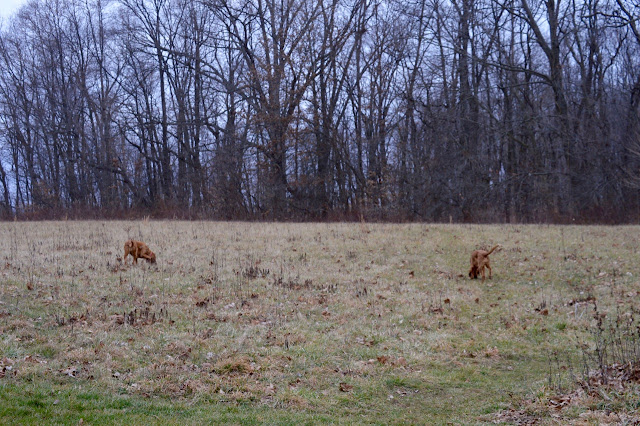 Once they saw me walking toward the field, they knew we were walking. It didn't take long for them to start their aerobic excercise with noses to the ground. 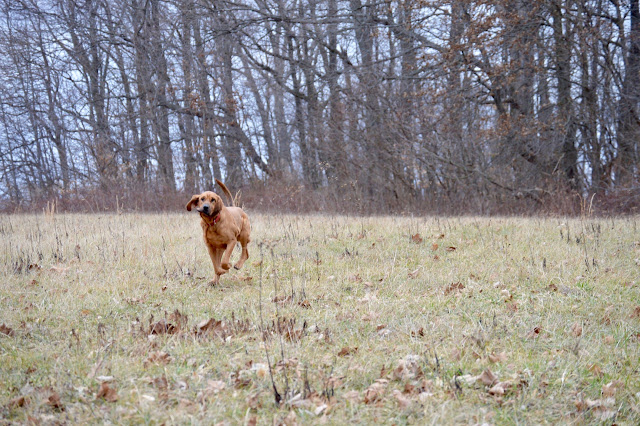 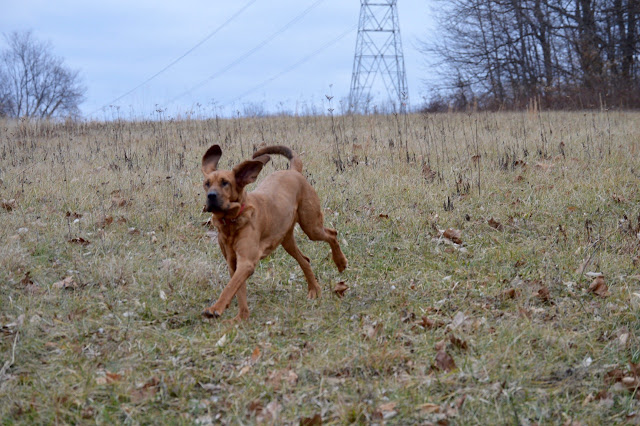 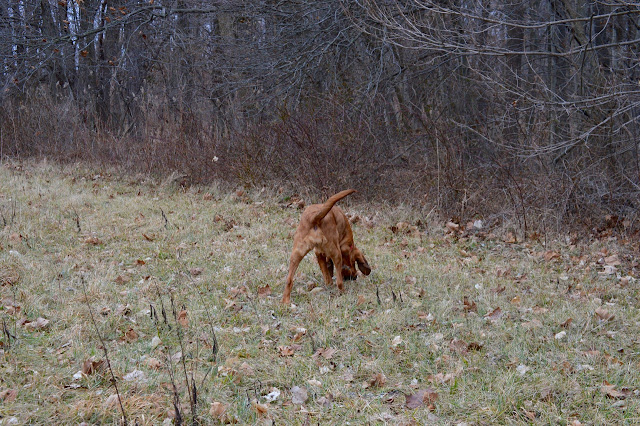 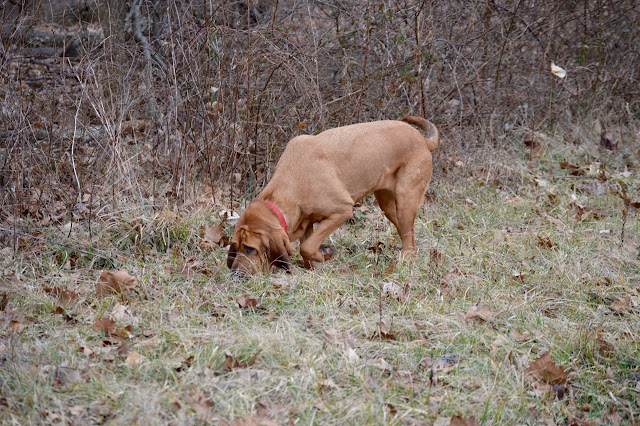 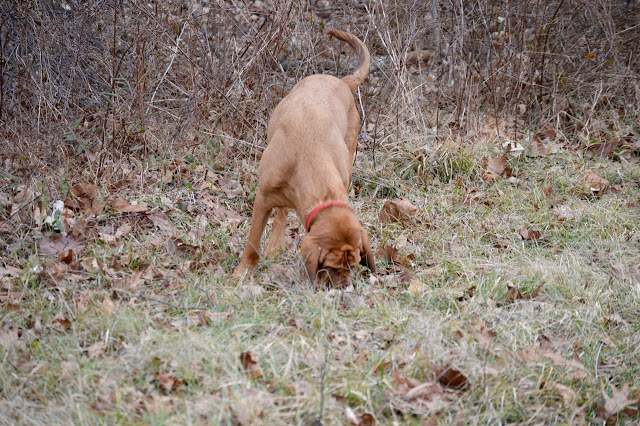 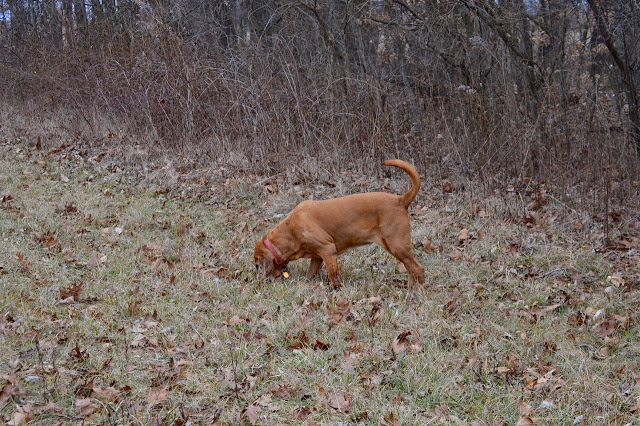 As we take that first turn to the right ... the coast is clear ... no unexpected deer or other animals. 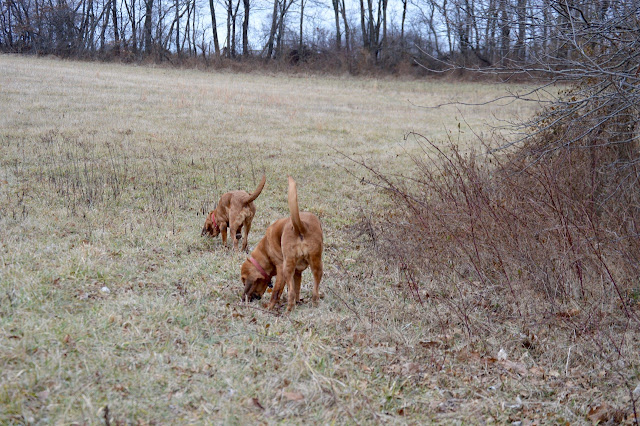 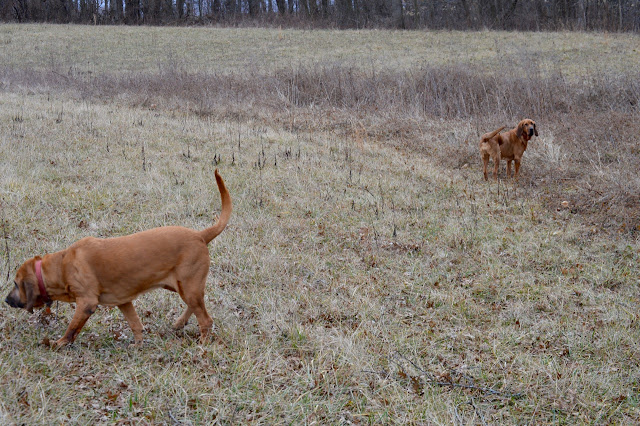 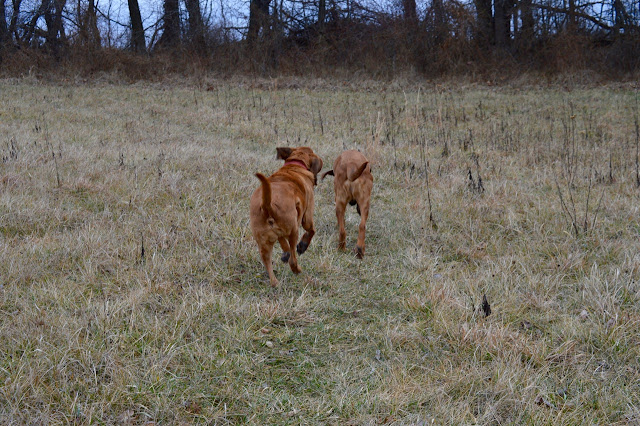 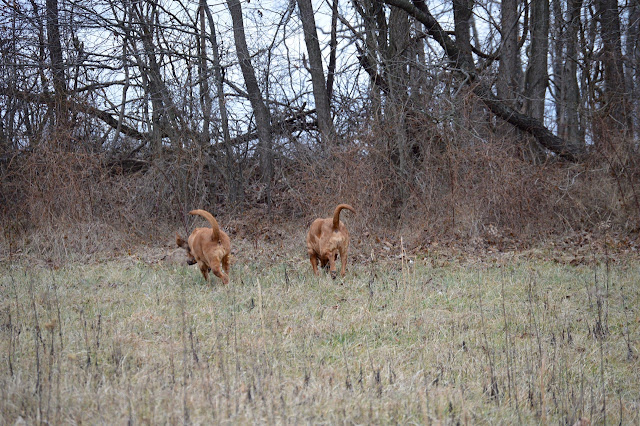 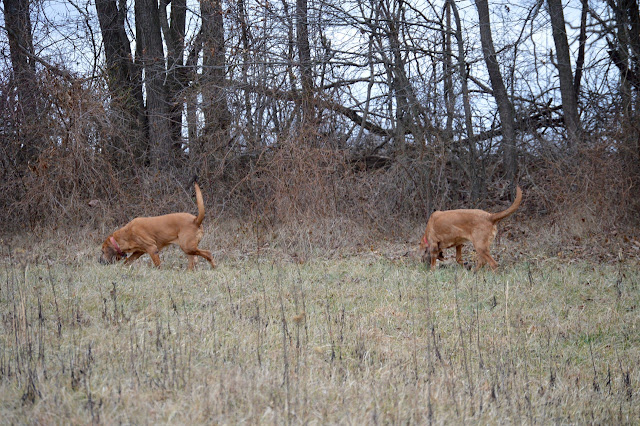 This next photo is too blurry to put on a blog but I wanted to show you that nothing stops a bloodhound when their nose finds something. Even if that means Stella walking under Sadie and lifting her hips off the ground ... all for the same target. 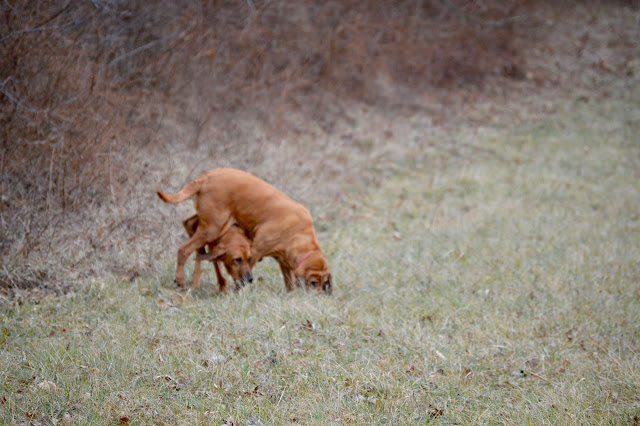 Very little was said today during the walk. They searched the field and stayed as long as they wanted with what they found ... them came running to catch up with me. 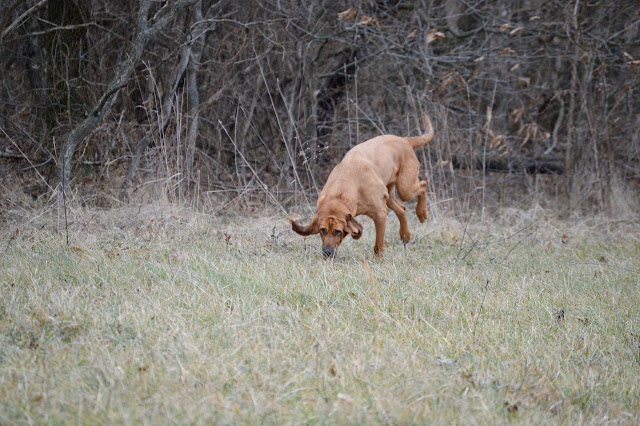 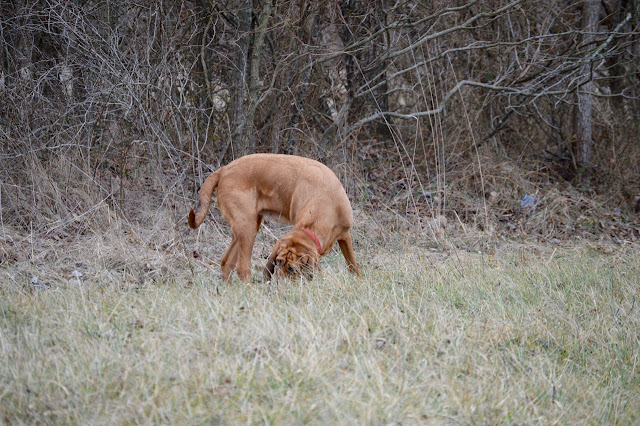 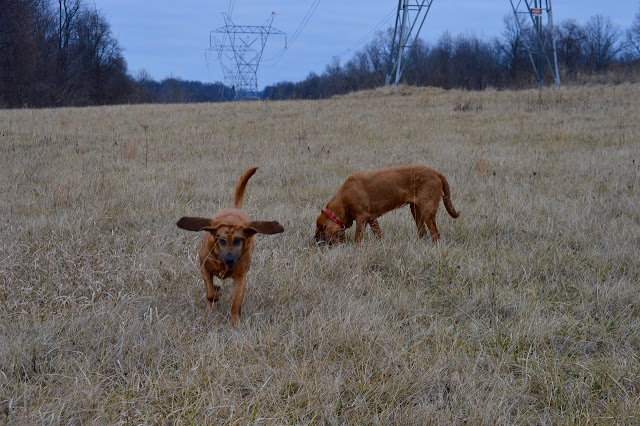 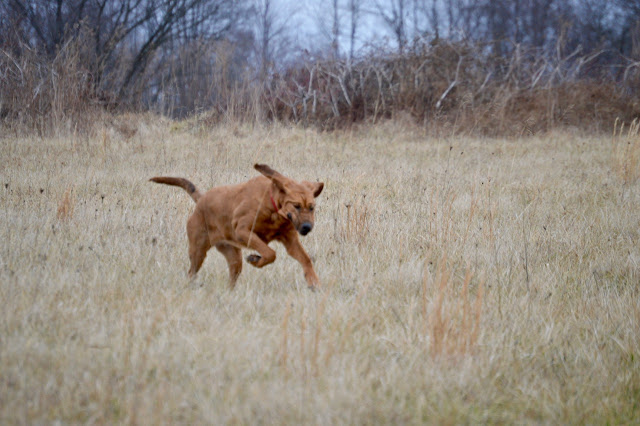 It never fails, they may veer a different direction on the way back home, but once I say "let's go home" they both line up on the worn path to head back. 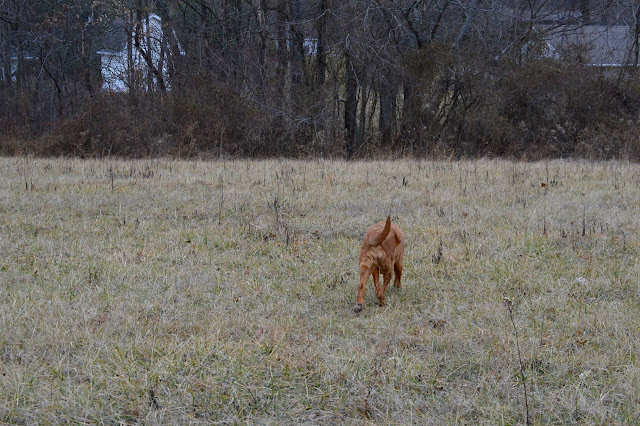 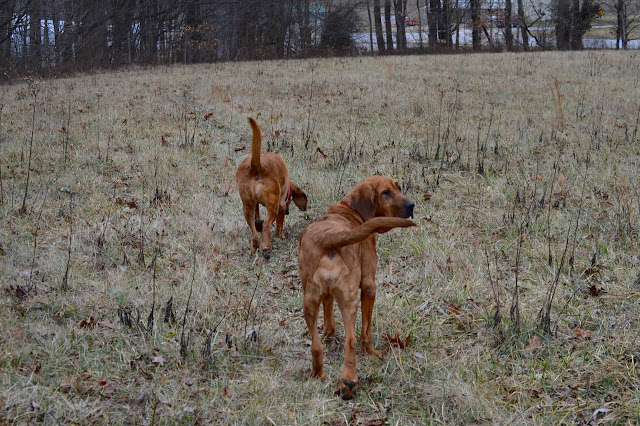 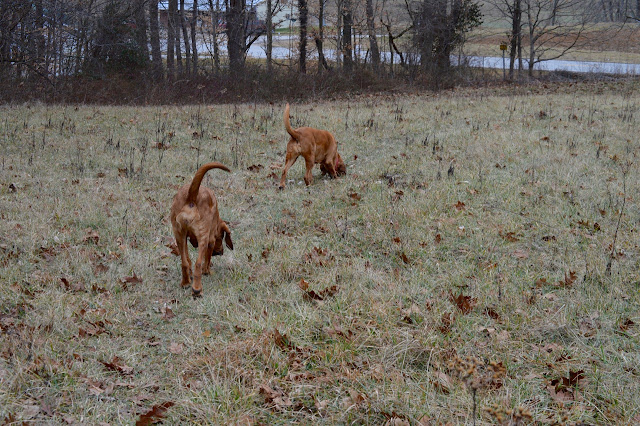 There was just one last thing they wanted to check out before coming back inside the house. 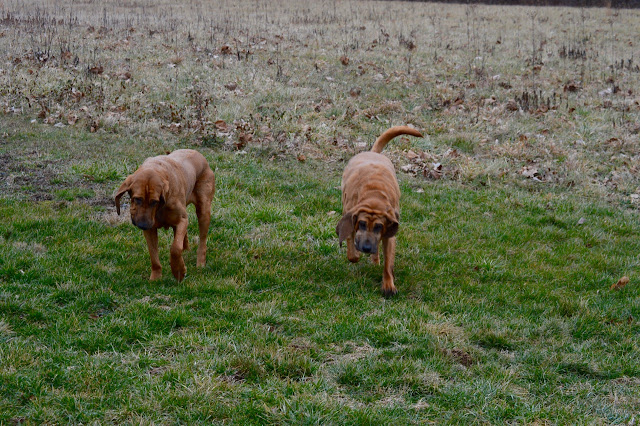 The yard takes a beating in the winter months. Mole traffic is running rampant. There are lots of tree limbs to be picked up and added to the new 2016 burn pile. Yet, the winter has been much warmer than normal here in the 'tropics' of Southern Indiana.
at February 04, 2016
Email ThisBlogThis!Share to TwitterShare to FacebookShare to Pinterest
Labels: Dog Walk Unleashed, Heidi, Sadie, Stella, Water Protection