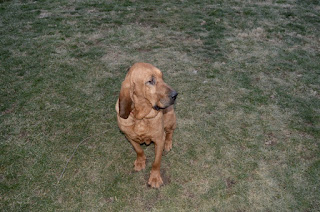 How can a great bloodhound have issues? If you were to see her at the house or outside you would never suspect she has severe separation anxiety. Since having basset hounds since 1987, some rescued from shelters others bought from breeders … Stella’s separation anxiety is the worst I have ever seen in a hound.

I was told before I decided to pick her up, that she had issues. The previous owner and I thought with me being around all the time, in addition to having another bloodhound to stay with … she would improve. That improvement was true from Aug 30-Nov 22. Up until then, any damage was very minor if any took place. It didn’t happen all the time.

Up until November 22, I was never gone longer than 2 hours. I guess I became over-confident with her performance, so on November 22 I thought nothing of taking a trip to see an old friend about 1.5 hours away. I was planning being back home by 4pm … I didn’t make it back until 7:30pm. I had also left early that morning, around 7am.

She wasn’t alone .. Sadie, Winston and Heidi were with her. She had food, water, every bone in the inventory and a couple Kong toys filled with peanut butter … all to keep her busy.

It was a SHOCK what I saw as I opened the door. That is putting it mildly.

It was THE worst damage I had ever seen by a hound in the 29 years that I have had them. Her strength was on exhibit, the word severe would be a compliment … no I will not post the photos I took.

Since that night on November 22 – I started over from scratch in her “training”. Just like the first day I had her, I leave her with Sadie in my now, pretty bare bedroom. Why that room … no electronics to destroy, no refrigerator door to open … and no doors to open.

From the best that I can figure out … she doesn’t freak out if I am outside for an hour. I have even quietly walked up to the window to see what she is doing … laying next to Sadie sleeping. I have stood outside next to the room to see what I hear … no sounds, no howling.

So the ‘trigger’ must be when she hears my FJ driving down the gravel driveway. When I have started my FJ or Mini Cooper and left it running but never leaving … no damage.

Until last night I thought it was “time related” … that I needed to be gone for an hour before she started destroying things.

Last night I was gone for 10-15 minutes to pick up a pizza I had ordered.

I even rolled the bed out to the center of the room on the hardwood floor, so she didn’t have to drag it out with her jaws attached to the end of my bed … that has been her most recent act.

I even leave the closet sliding doors open so she doesn’t have to push them off the track to get inside. There is NOTHING left that she can destroy … she did all of that November 22.

So I return within 12 minutes … TWELVE MINUTES … and there are signs of destruction.

Months ago I had moved a heavy chest of drawers in front of a small wall that is between the bedroom door and my closet doors. She had been digging on the wood trim by the door handle, since she could not open the ’round’ door handle but she can open ‘lever’ door handles. I decided to protect that wall.

Within 12 minutes, she had slid that heavy chest of drawers away from the door handle … ready for this???????

She started digging at the drywall, door handle high.

So I will be digging deep throughout the internet for books, articles or even possible books here at my local library … on canine Separation Anxiety … and hopefully find some sort of answers. I guess I have my answer why I am her 4th home in her short 6 years of life.

I can’t say that I am happy this morning in the ‘tropics’ of Southern Indiana.
at February 02, 2016
Email ThisBlogThis!Share to TwitterShare to FacebookShare to Pinterest
Labels: Bloodhounds, Stella, Stella's Separation Anxiety