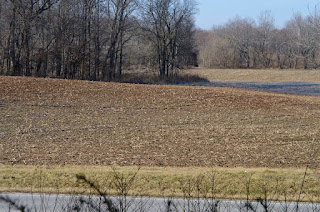 Woke up to a bright and sunny 21° here in 'the tropics' this morning. Some of the rooms were in the mid 50's, it didn't seem that cold when we went to bed. It was time to buy gas and dog food, so I knew I was going to get out of the house today ... with a possible road trip, depending on what kind of dog food I was going to buy.

Over a cup of coffee I decided that Stella needed a new leash, one to give all of us a better chance of telling Stella and Sadie apart in the photos taken. Another factor in the possible road trip was if I was going to change brands of dog food for a final time.

Diamond Naturals is located right downtown at the local 'feed store' where the Fromm for Lrg Breeds was 25 miles away. I needed to buy only 2 more bags to get my free bag of Fromm. No doubts that all of that dog food would eventually be consumed in this house. I had just written last week sometime that I was happy with the Diamond Naturals for all the hounds ... over the time it took for them to eat the 40# bag, things changed.

Heidi was itching so much on clear skin ... it was past the point of obsessive. Stella was fine. All their coats are soft and they shine. Sadie started doing two things, one of them she had done before when on Diamond Naturals ... at night she was frantic to get outside, then sprinting to the field and eating grass, a LOT of grass. The new thing she was doing ... licking her lower leg about 1"-2" wide ... fully saturated but no hot spot, nor any chewing. She licked as much as Heidi itched ... Stella had no issues. To me that looked like they had issues with something in the food.

So like changing my blog back to Blogger for a final time ... I put Heidi back on Earthborn Grain Free and the bloodhounds on Fromm for Large Breeds. The Earthborn for Heidi has a min of 20% fat which is really high and protein of 38% but I think with that much fat and feeding her twice the recommended amounts, it would help her add some weight. Yet, maybe not, as some here have said she might have a metabolism issue, therefor cannot keep weight on ... whatever the case she will be getting better ingredients with the Earthborn no grain food.

Right after this post is published it will "Toe Nail Friday" ... where I will be cutting a total of 64 toe nails counting their dew claws. I look at it only as 3 hounds. Stella's toe nails have always been the perfect length and she doesn't mind getting them trimmed. Since I started just cutting a little bit every Friday/Saturday - Sadie's and Heidi's are slowly being decreased back to a shorter length. The sound of a dremil tool turns all the hounds into sprinting champions so that is not a possibility. Nail clippers are my only option.

Heidi made it out not only for the 1st trip of the day but she came outside voluntarily after lunch. She sprinted back to the concrete after I had carried her into the field. Maybe when it is warmer she will be more interested in getting back into the field. 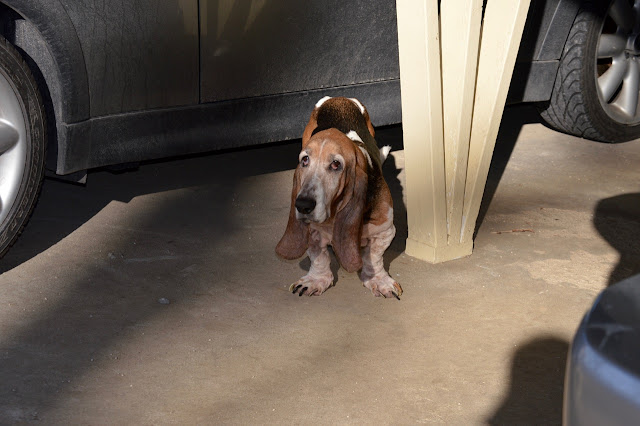 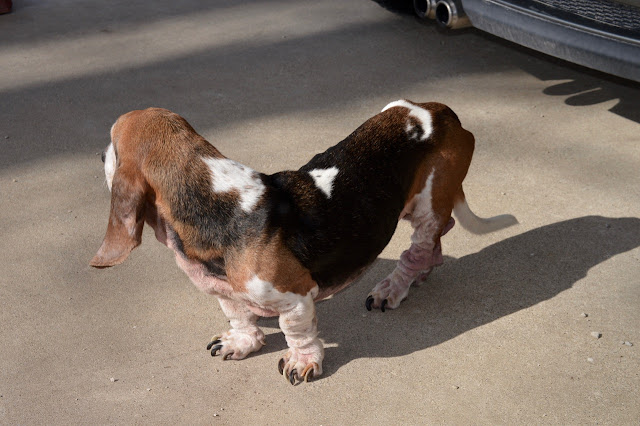 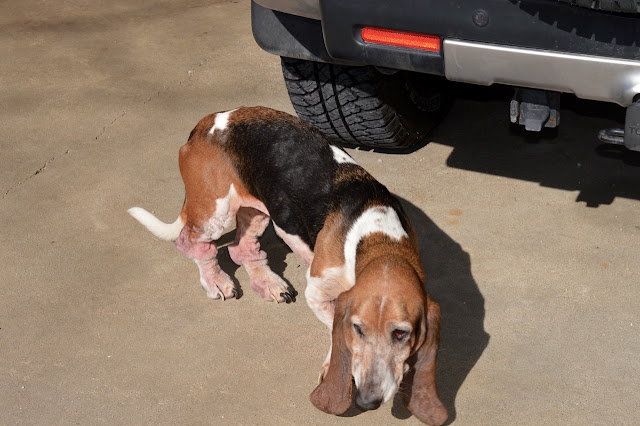 I took Stella with me to T&T Feeds in Bloomington to buy her a new leash and pick up Fromm dog food. She stayed in the FJ this time instead of following me into the store.  I wanted to see what she would do if I left her alone in the FJ while I was inside shopping. She passed that test with flying colors. She loves going for rides and she did not bark or howl when I walked toward the store. Last night I was gone an hour and a half ... she had not damaged anything but she did move the chest of drawers enough to reach the drywall next to the door. There was nothing on the floor to show she had been digging at the drywall though. So she is on a winning streak of a few days/nights where there have been no damages when I am gone.

I would have preferred a different color, further away from Sadie's red one but the choices were slim. The ones I liked were sold out in her size. Anyway we should be able to tell from now on, which bloodhound is Sadie and Stella. I didn't care for the faded pink one she came with.

The new one besides Sadie's red one. After the manicures we'll take off for a Friday afternoon walk. 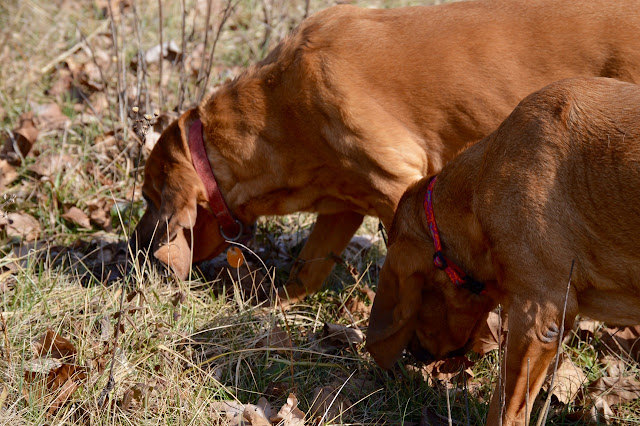 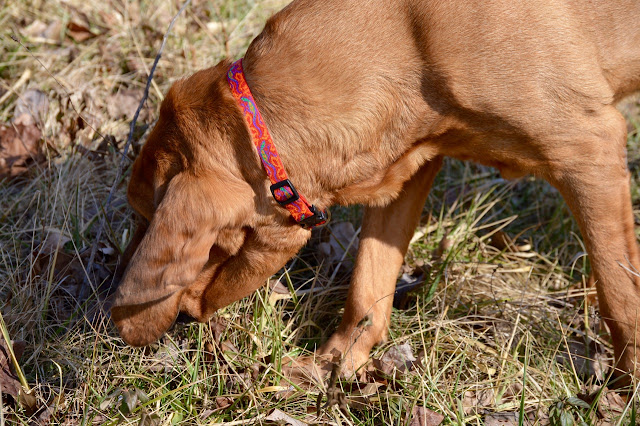 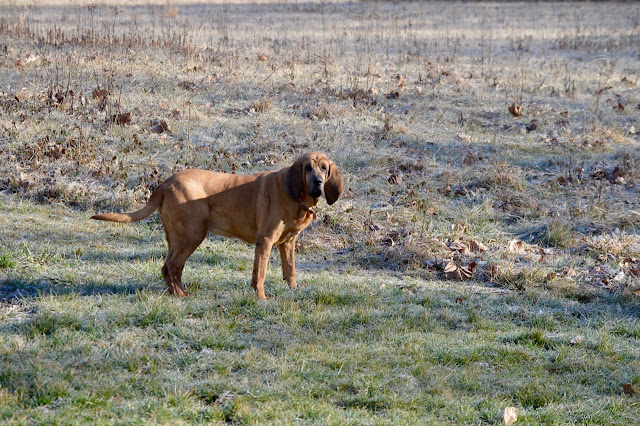 It's a beautiful Friday here in 'the tropics' of Southern Indiana.