Stella Crosses "The No Fly Zone" 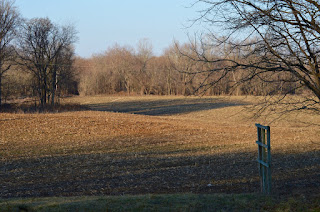 The blog starts off strange today when I open the bookmark to the blog and the title is in a different font ... how does that happen? A cache problem?

The early morning walk is now part of the daily routine. Sadie is the leader basically and knows the routine has changed. The second time they go outside, they don't take off for the field with their noses to the ground like they use to do until a few days ago ... they stand and stare at me ... I know what they want from that look they are both giving me. So a walk it is.

The air was cold but at least the strong 30-40 mph winds had died down sometime last night about the time it started to rain lightly. I have a lot of sticks to pick up today out of the yard and add to my burn pile. 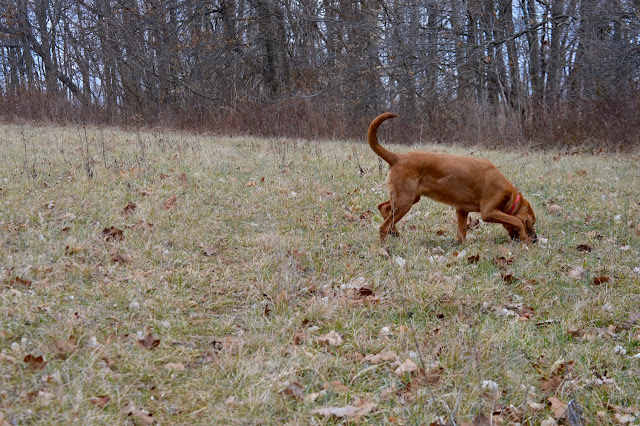 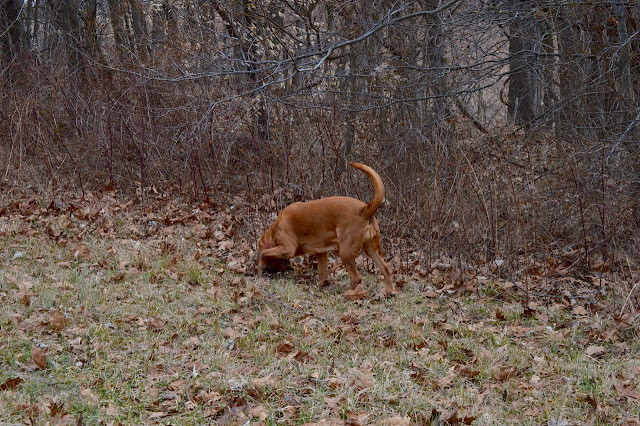 With blue skies and a lot of clouds, we took off. Although we follow the same path, now twice per day, every walk is different. Each walk has different things happening within that 20-25 minutes. It didn't take long today to see that, when Stella was walking on the return path out away from the brush line. 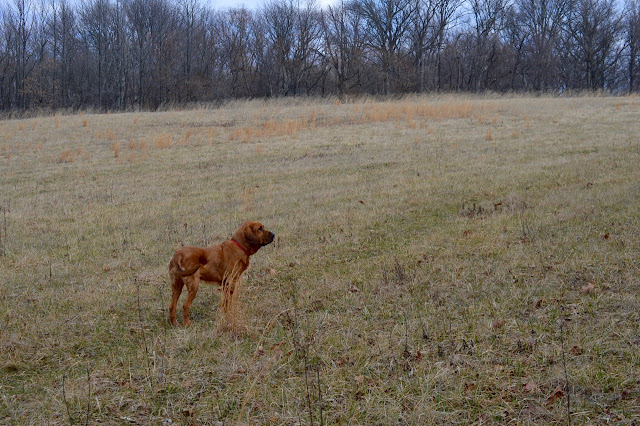 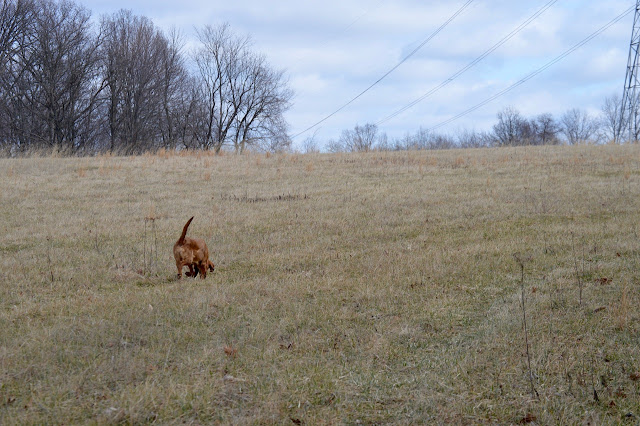 When I said "Stella, come on" ... she went trotting over to Sadie ... back to the normal trek. Today she decided a break in the walk was needed so her and Sadie could play a little. Due to the short distance between my zoom lens and them, I was unable to fit them into a lot of photos. 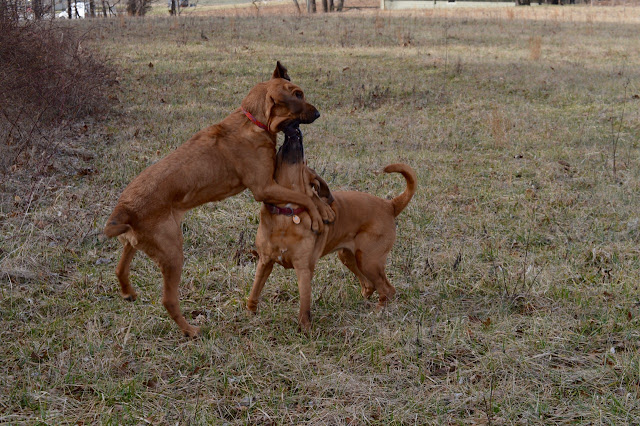 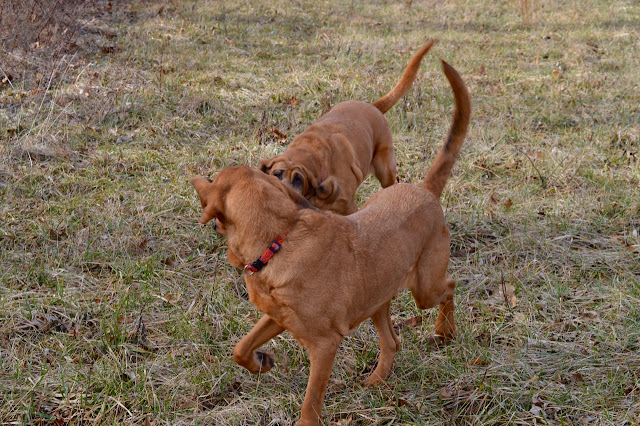 In a split second, they stop playing and start walking together. 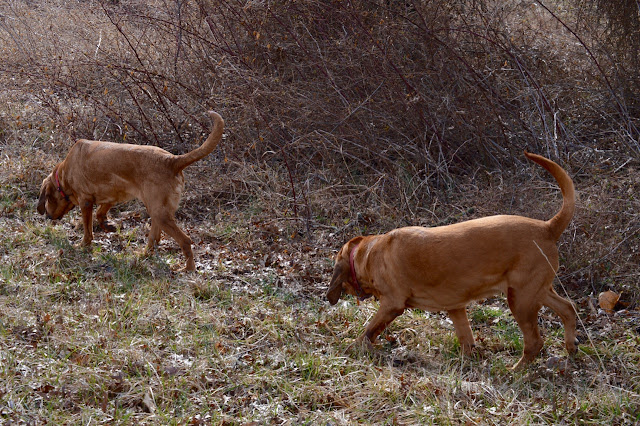 It is routine for her to head right after the area of what I think is the deer sleeping area. Only today she was all the way to the corner of the field after making that right turn ... each day she had been going a little further out. It wasn't a big deal because she always comes running when called ... just like today. 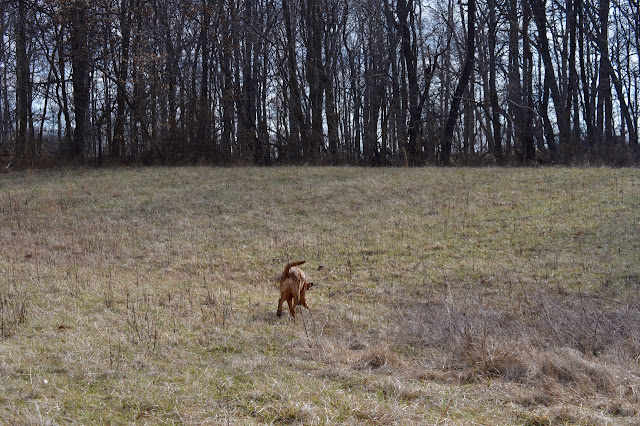 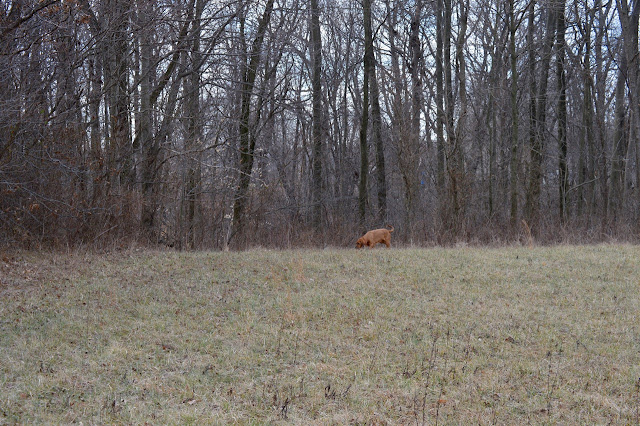 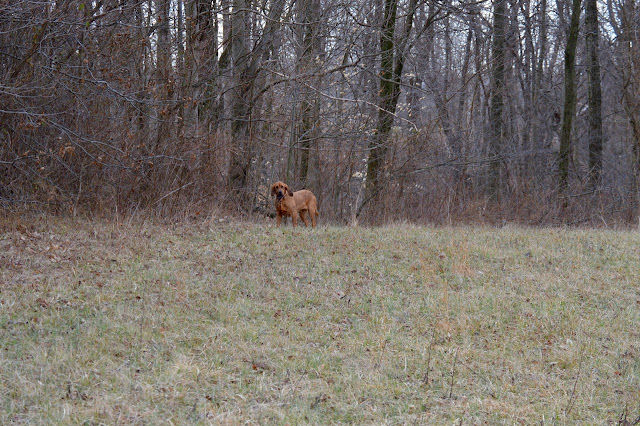 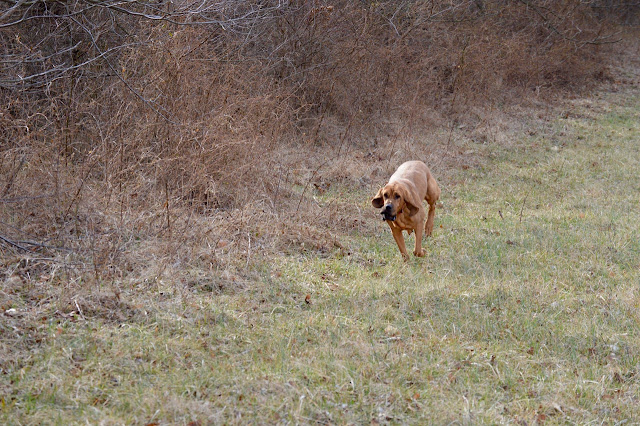 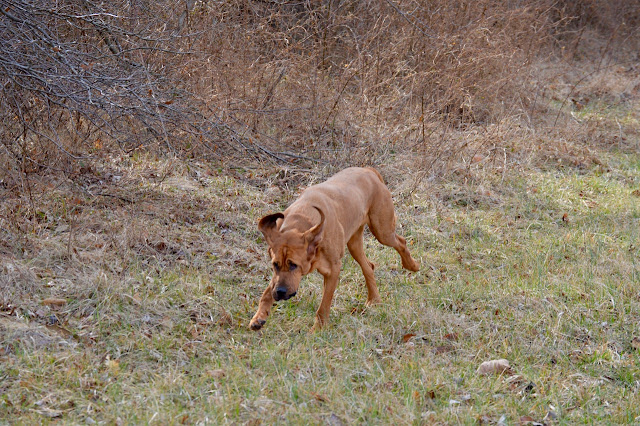 When I started letting Stella walk with no leash a few months ago I knew there was a possibility she might take off sometime and I would have to run to get her. No ... in fact I knew it was a sure thing, that it would happen eventually. It wasn't that big of deal, it was just the shock of turning around and not seeing her. The last time that happened was a few days ago when she had ran and snuck up behind me by the time I turned around.

At the place we turn to take the return path she has always wandered to the right toward that big tower holding the power lines ... even when she was on the 25' retractable leash, that area was always an interest to her. She will always hangout in that area as Sadie and I continue walking. I can then turn around and get some photos of her running. 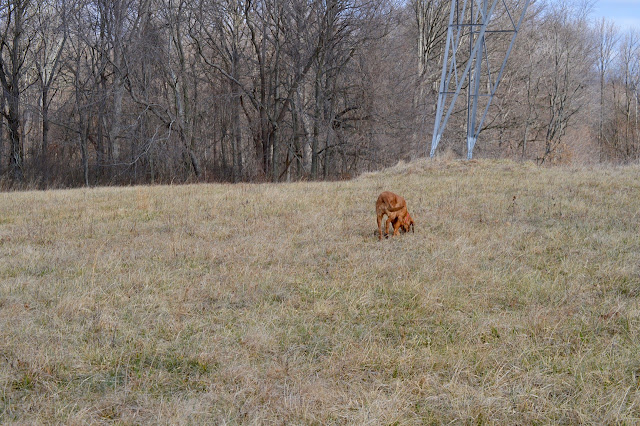 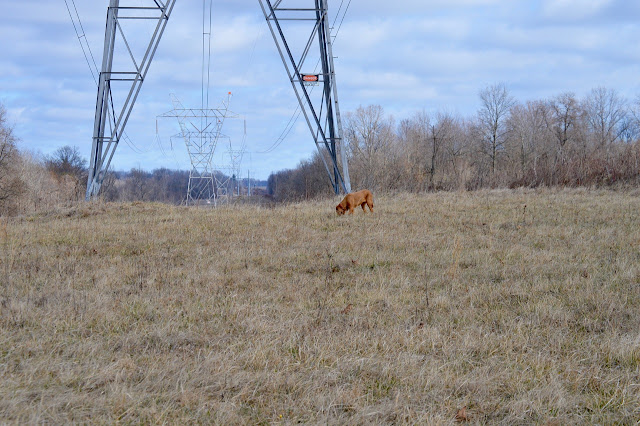 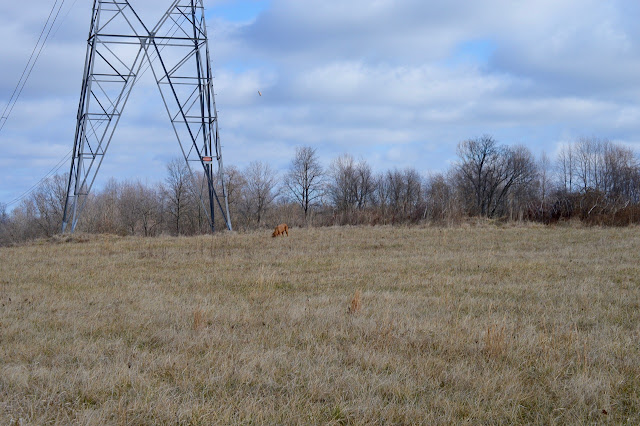 Something different happened today though.

I turned around and didn't see a bloodhound anywhere. I checked behind me to see if she had snuck up on us ... she wasn't there, only Sadie. I was pretty sure I knew where she had headed. In prior years I had seen groups of deer running north and then jumping over the fence into the woods. I was hoping after I crested the small hill that is where I would see her. 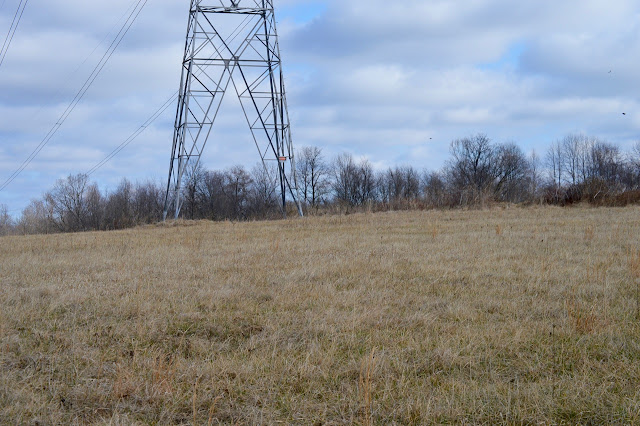 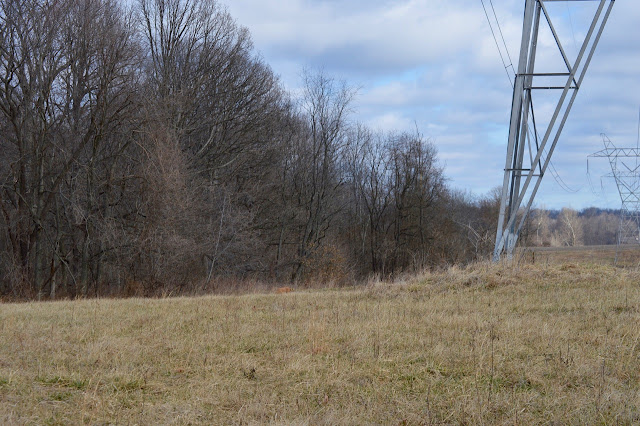 As you can see in that last photo ... she is WAY outside of her boundary.

I wasn't in shape nor the mood to be running through the woods trying to find her. Luckily as I crested that small hill, my camera picked her up sniffing the ground a long way off but at least not in the woods. I yelled her name and she came running ... almost knowing she may be in trouble because she had crossed "the no-fly zone". 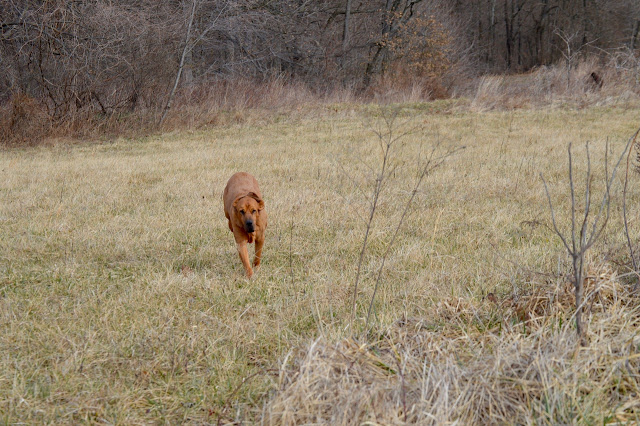 When I said "lets go home" both her and Sadie trotted out in front of me for the slow walk back to the house. Each time she started to veer off the beaten path, he would return each time I said "no". They took their time but ended up making it back to the house with Sadie finishing with a short sprint. 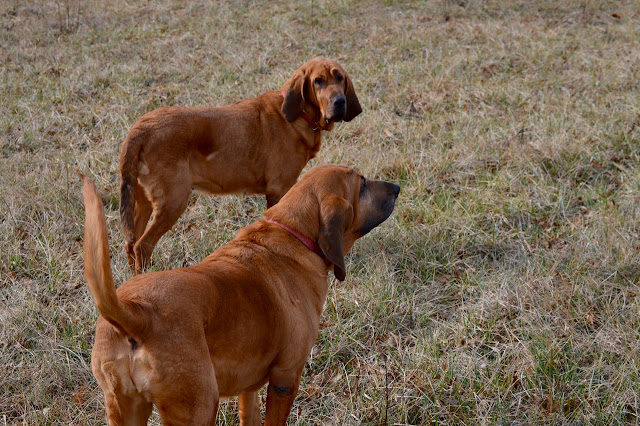 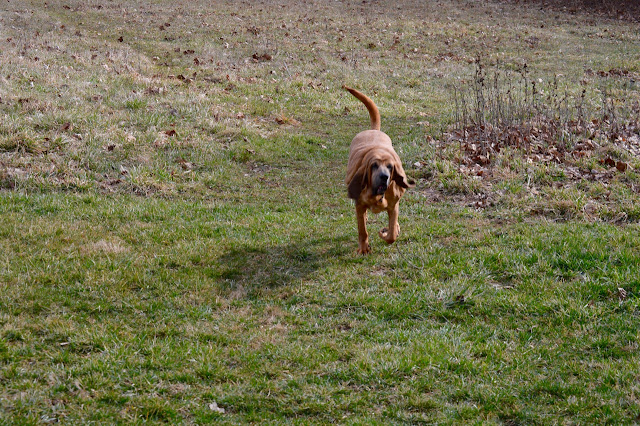 With the temps in the high 40's and well below Heidi's 70° threshold, she remained in bed sleeping while the bloodhounds and I walked. The two walks per day should help Sadie lose some weight this spring, summer and fall.

It's another beautiful morning here in 'the tropics' of Southern Indiana.
at February 29, 2016