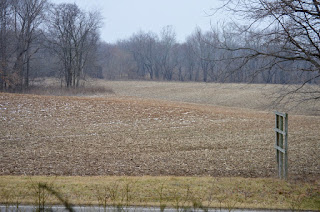 It took a while but finally the temperatures moved out of the upper teens and low 20's to something more bearable. It took another day for the ground to absorb the melted snow. We found out yesterday afternoon it was solid enough to take a walk. The hounds loved it, as they had some serious 'cabin fever'.

There was plenty of other action before that afternoon walk though and at the time I didn't care for it ... because it caused me to lose my favorite baseball cap. It's the one I wear whenever outside doing yard work and at times when I am running errands around this rural area.

Sadie tried to warn me ... but I didn't pick up on what she was telling me. She came to sit next to me at my computer desk and had this look in her eyes that there was something going on that should not be going on ... she turned her head toward Stella. Both of them had been laying on the floor chewing different bones. I thought that was what Stella was doing. When I checked ten minutes later I found out what Sadie was trying to tell me ... Stella was chewing up and eating my favorite baseball cap. 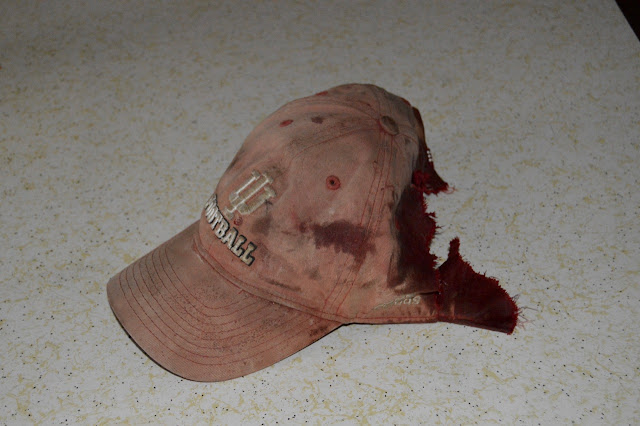 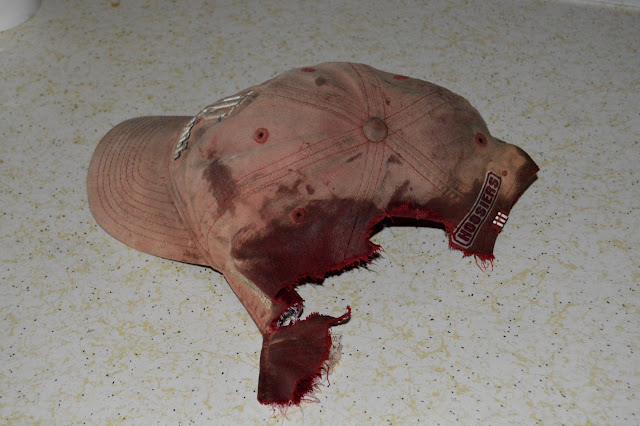 Anyway after the initial shock was over, everything was okay ... I figured Stella was telling me it was time to buy a new ballcap to wear when I do yard work in this year. I am not really sure how old the one was that she chewed up.

With the snow melted and the first walk in a few days, the hounds were pretty excited with all the new scents and with the amount of deer tracks I was seeing the deer activity had been heavy. There was one close call yesterday with Stella. By the time I got the camera pointed in that direct she was already running towards me knowing she was in trouble. I had turned just in time to see her inside the wooded area and was on her way of running down into the very deep gully. She came running when I yelled her name. 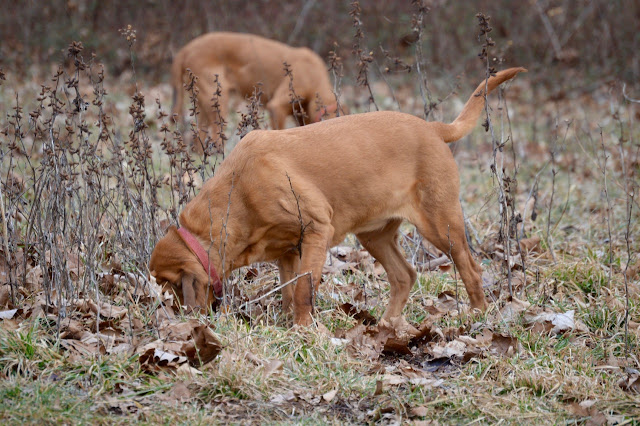 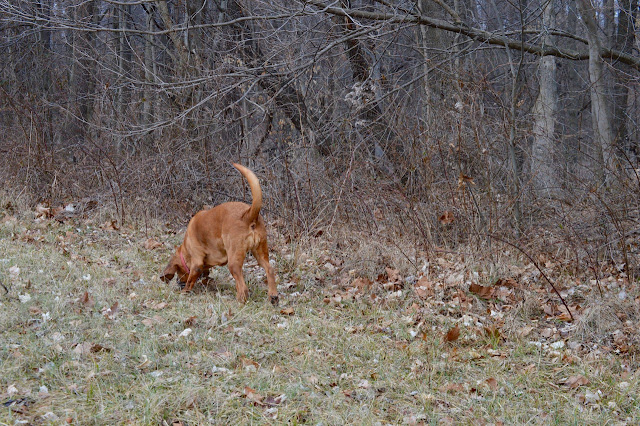 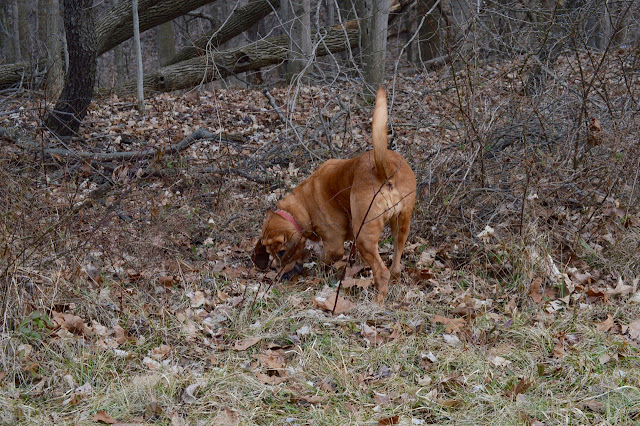 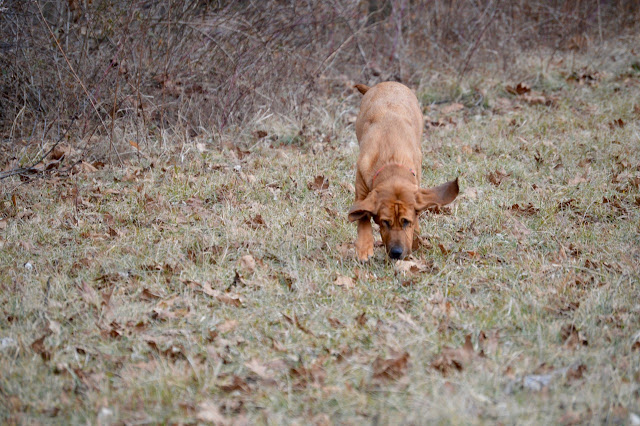 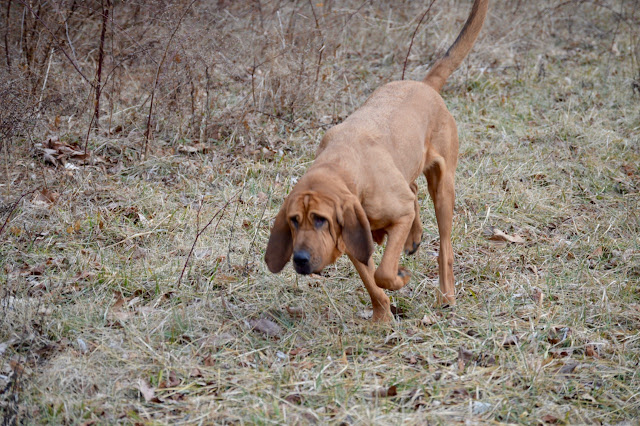 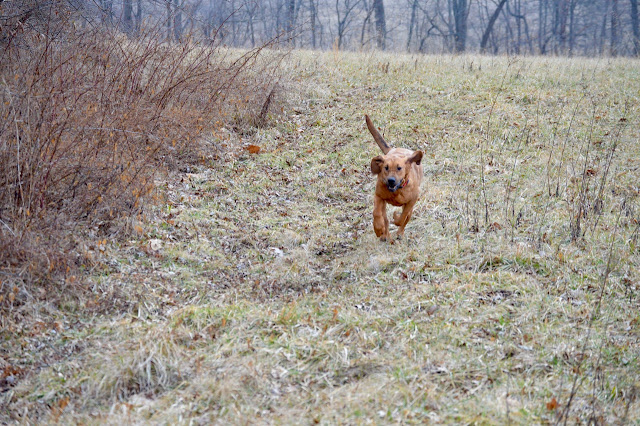 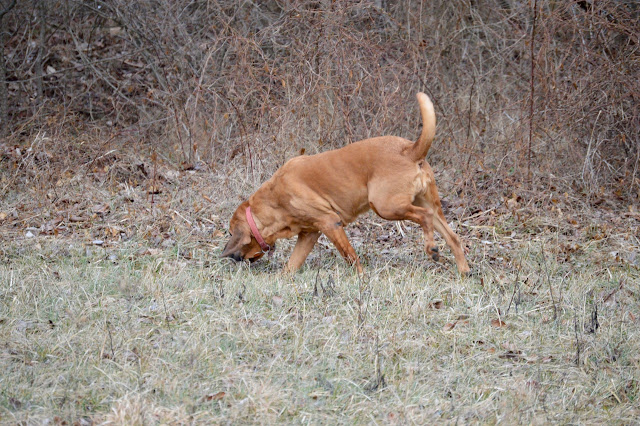 The sun was trying to break through the overcast toward the end of our walk. Plus this shows a pretty nice "skyline" view of the neighborhood. The place is so quiet you don't know if people are still living there or have gone south for the winter. 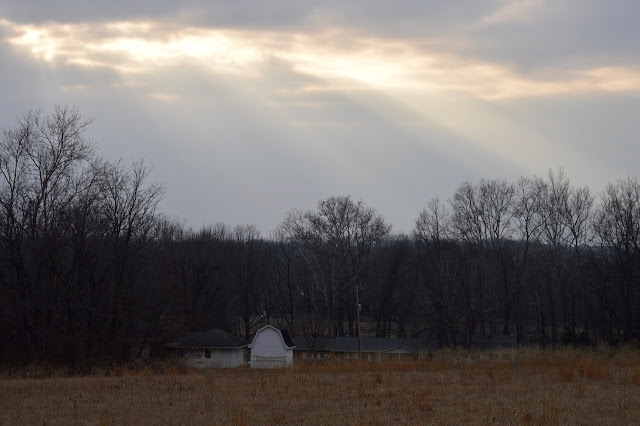 Heidi for some reason protested any offers to go outside yesterday after her initial trip in the morning. With the change back to Earthborn Holistic Dog Food, the Primitive blend ... her skin has really looked good and has shown no signs of redness as the day progresses.

Stella spent most of the walk lagging behind ... I think it's because she likes to run to catch up to us. That's good exercise for her. 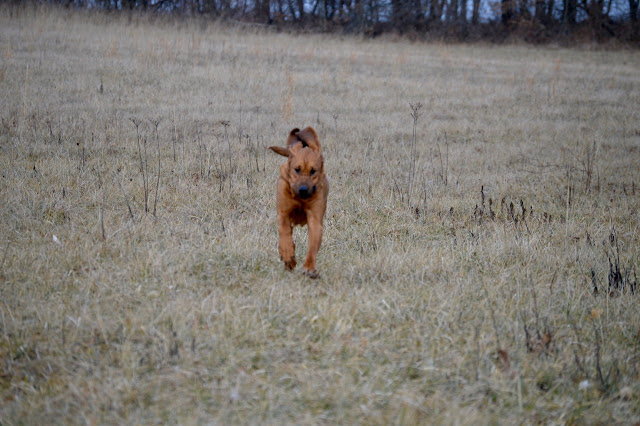 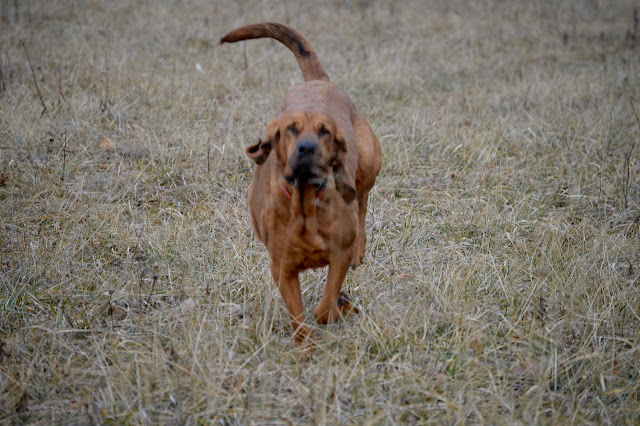 I didn't notice until I was editing this photo that a neighbor had put on a new red metal roof. I evidently don't get out much because I don't ever remember seeing that replacement taking place. Back in the 60's I remember visiting that house to meet and talk to my great grandfather. 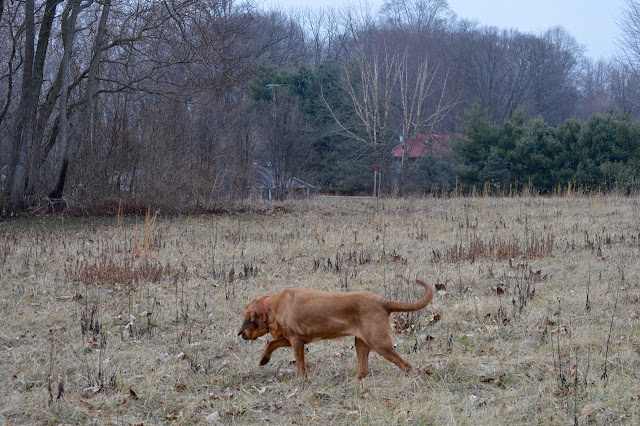 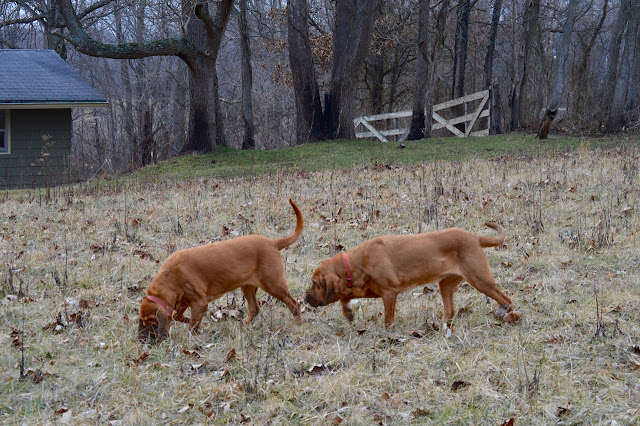 Some of you know I've been thinking again about blogging. I am going to leave this blog open but I will be posting less frequently. Over the years there have been so good online friendships developed and due to the distance from 'the tropics' this blog is one way to stay in touch. Plus everyone likes to check in on the hounds to see what they are up to. I would prefer to set the blog up by invitation only but I found out yesterday from further reading that each person would need to log in with a Google account, which I assume that means you would need a gmail address to log in to read the blog. Most of the readers that I would invite don't have gmail accounts.

So, the blogging will continue but on a less frequent basis. Life is pretty boring here in 'the tropics' of Southern Indiana, especially in the winter months. It's hard to find things to write about during those times, as well as the warmer times of the year.

It's time to head out ... Sadie is giving me her stare telling me it's time to go out and check things since the sun is up.
at February 18, 2016
Email ThisBlogThis!Share to TwitterShare to FacebookShare to Pinterest
Labels: Blogging, Earthborn Holistic Dog Food, Heidi, Sadie, Stella