All The Hounds Enjoy Monday 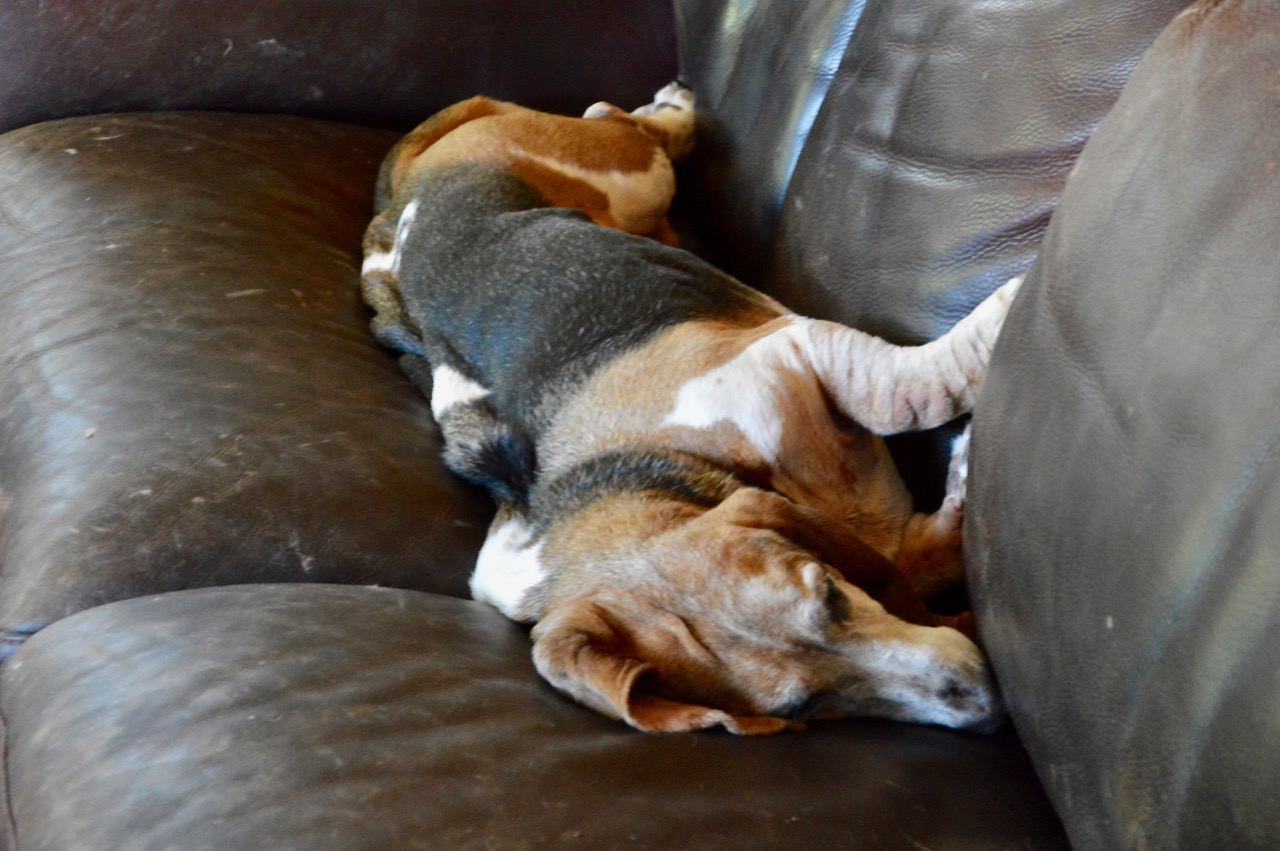 You will have to excuse the 'lived in' look as I have been lagging on my housekeeping inside. I wanted to show what Heidi does most of the time not only during the freezing cold days in the winter but those summer days where the temps are above 80*, if not 75°. Any ideas on cleaning a leather couch of that size? 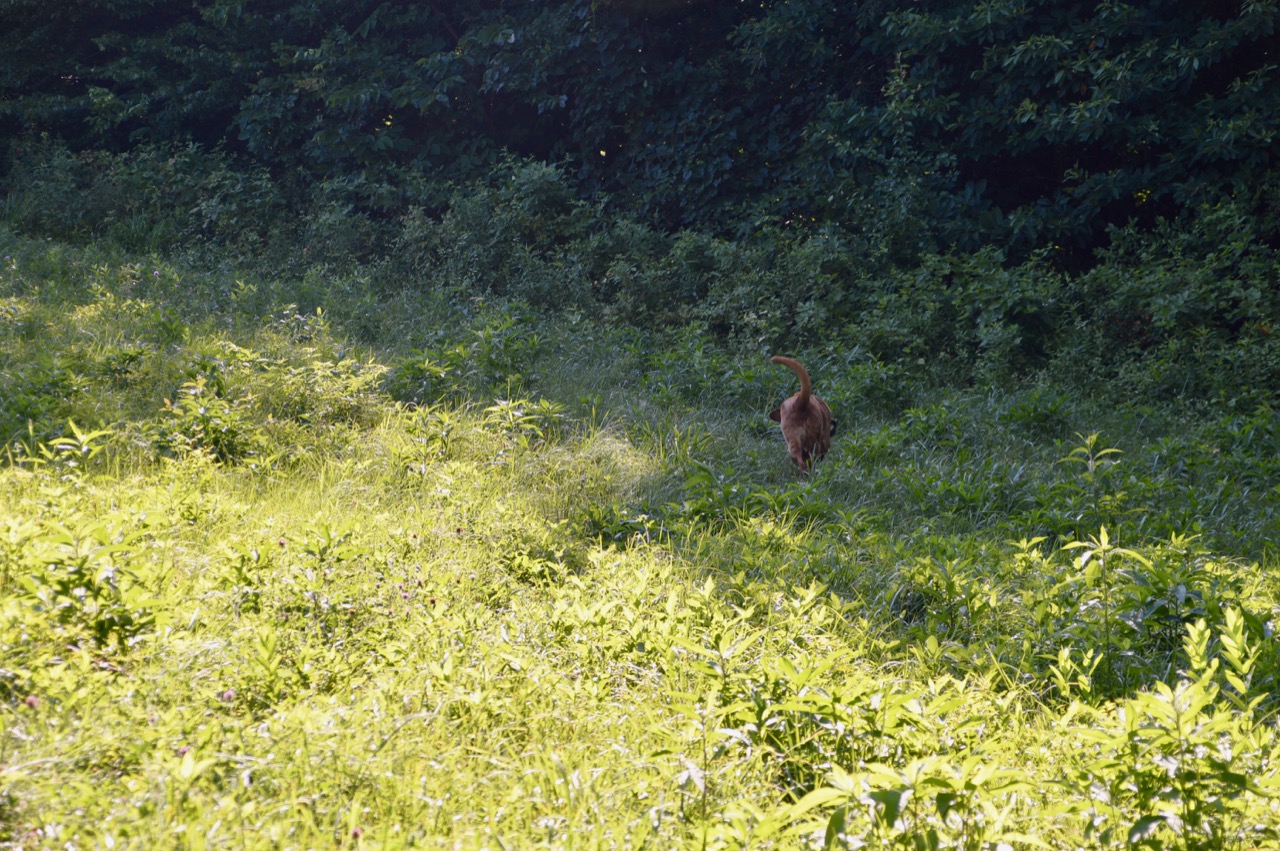 I had barely taken my regular second photo from the corner of the house, then setting my Garmin VivaSmart to monitor time and distance for the walk ... when I glanced up and Sadie was in a full run starting her own walk. We had a later than normal start today but the shaded areas were still wet with heavy dew. The snow boots were worn again today. I like dry feet. 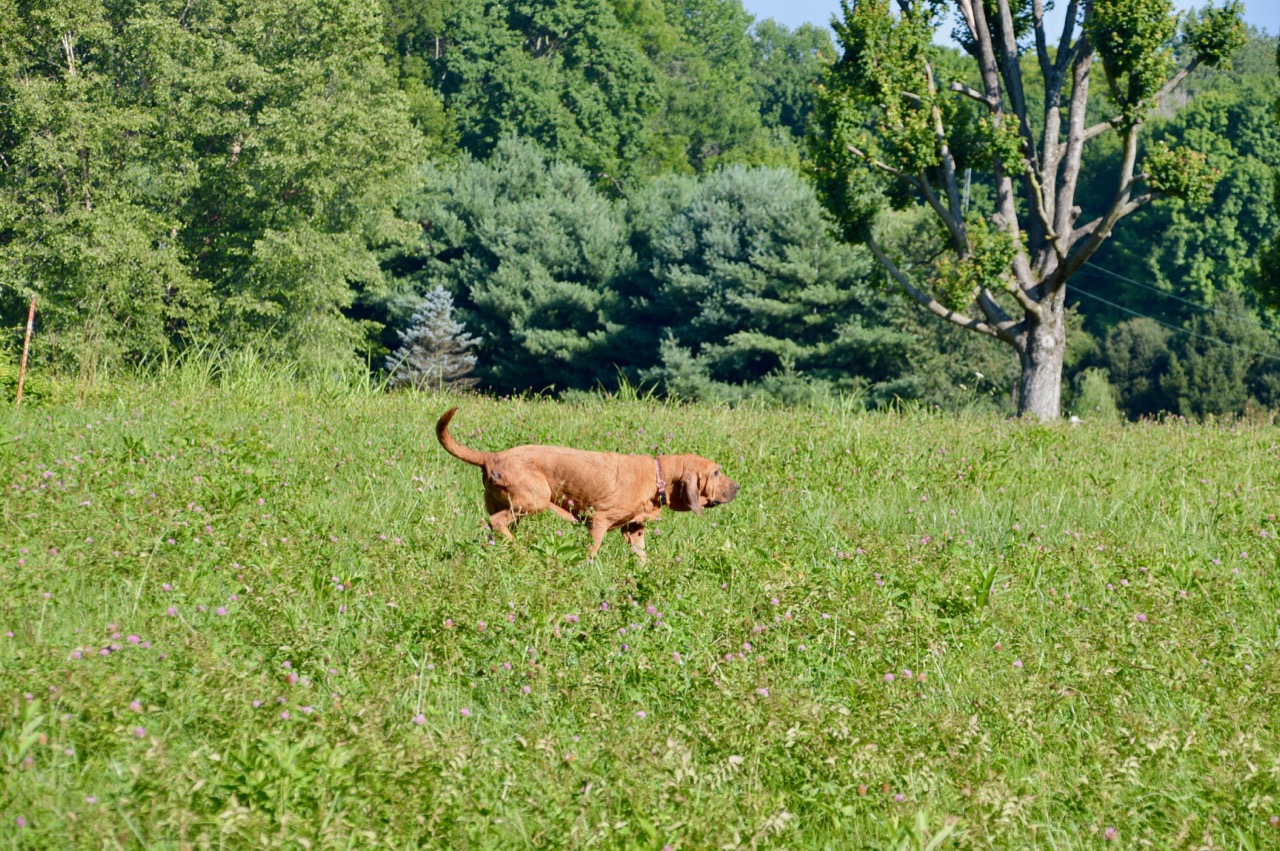 As I walked I glanced over at Stella and all things seemed normal. 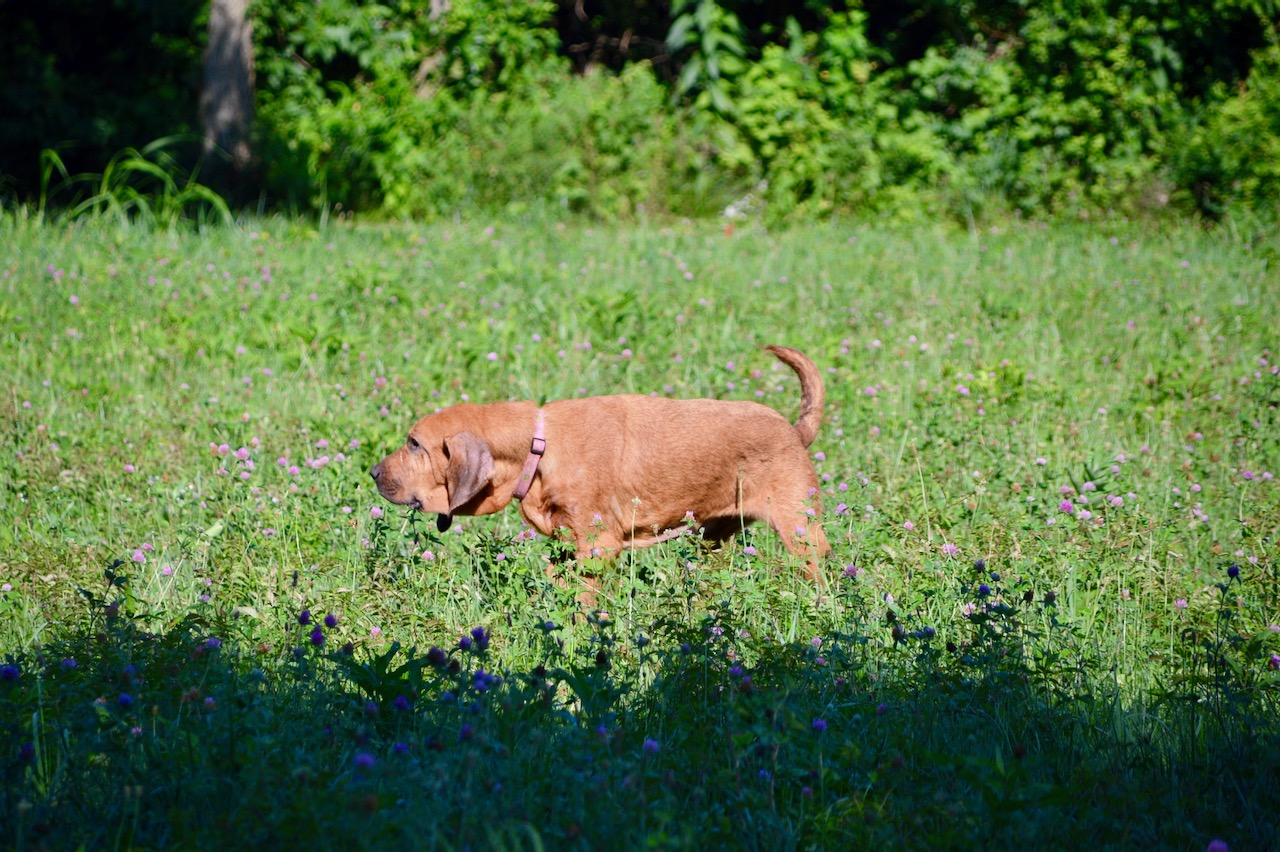 Then she made an abrupt turn and I knew then ... this was going to be a long walk and since it was Monday, she may have had come up with a new routine. 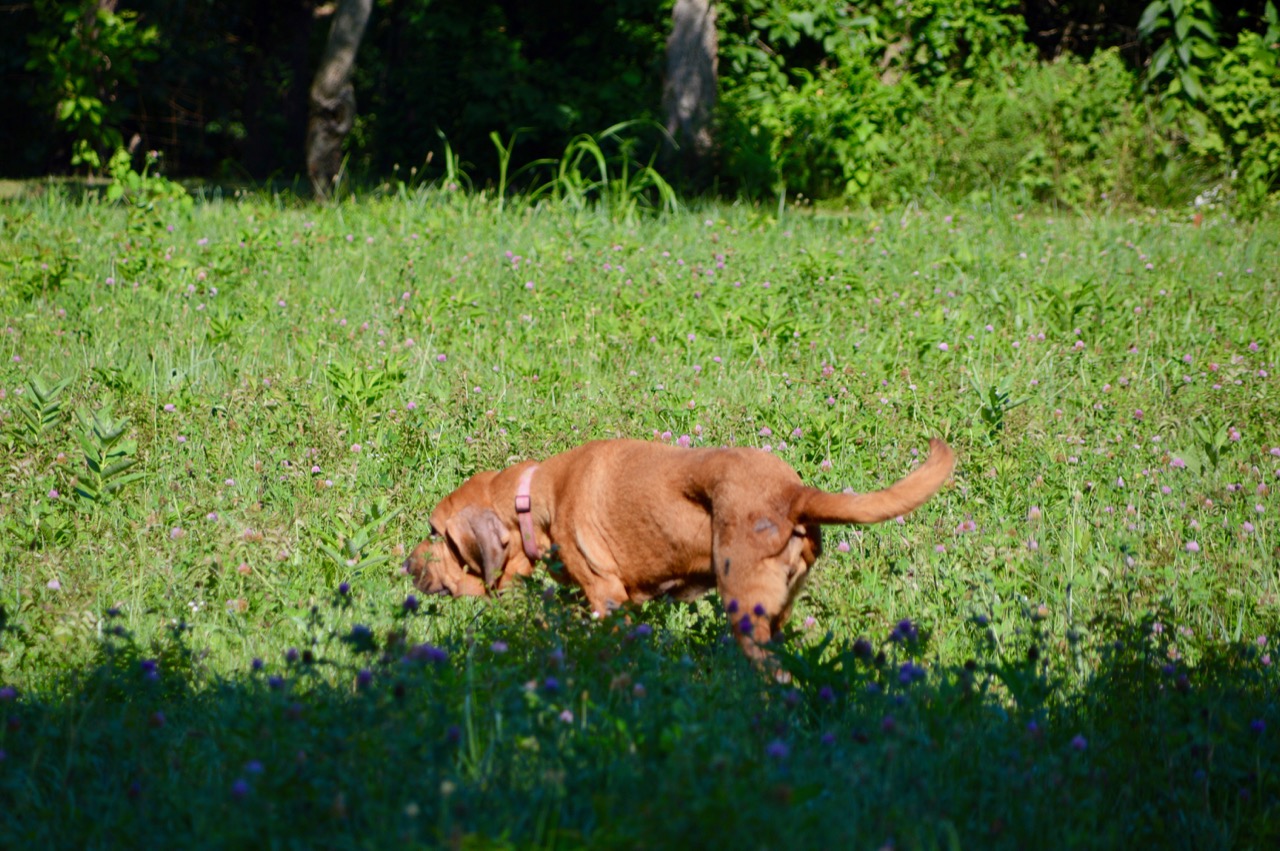 After standing there for a few minutes I realized she was just looking for that perfect spot for the second time this morning to relieve herself. Without any words being said, once she was finished she started trotting in our direction. 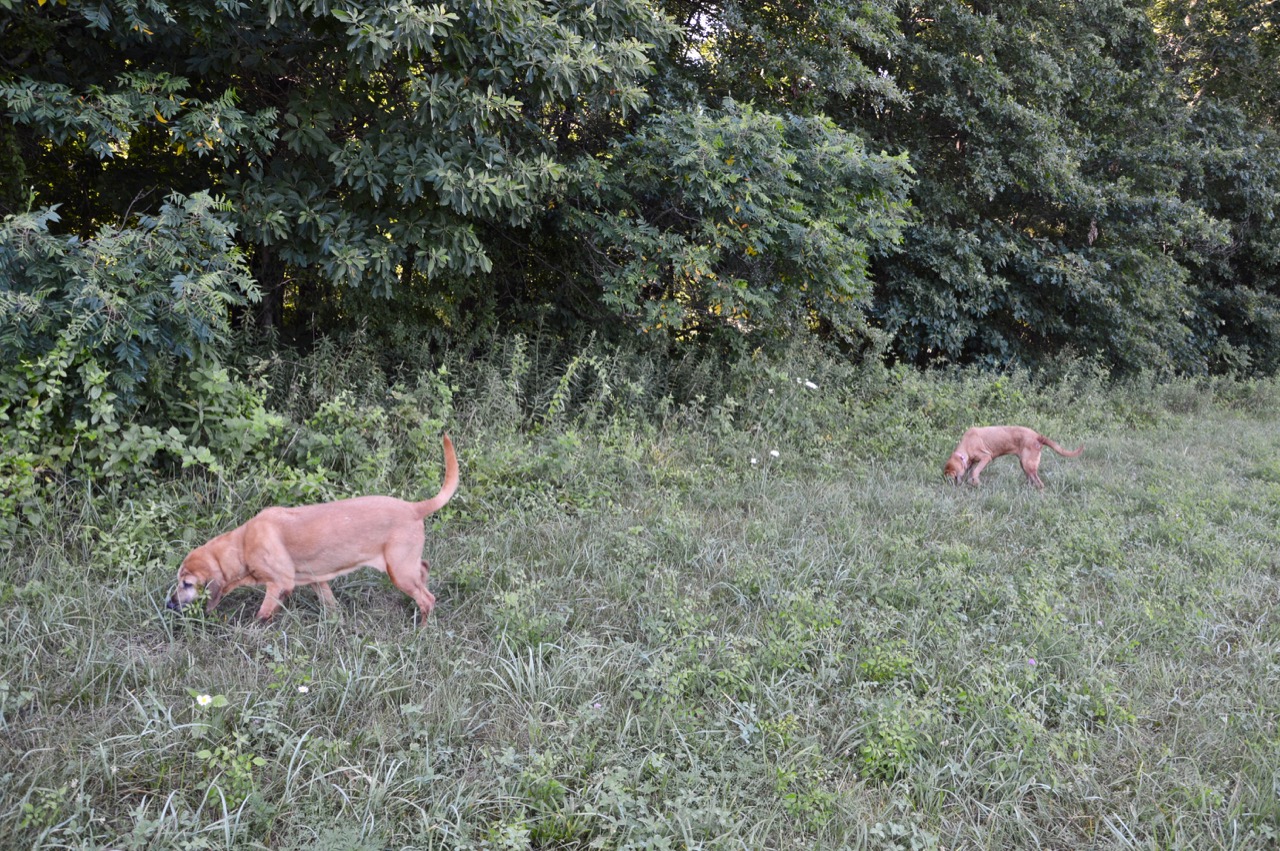 Sadie was in the exploring mode, Stella had returned to her stubborn mode and never heard a word I said. Verbal herding was not working the first part of the walk. Luckily it was another nice morning although I could feel a little more heat than our Saturday morning walk. It was still be about 10°-15° cooler this afternoon compared to last week and that would be good enough. 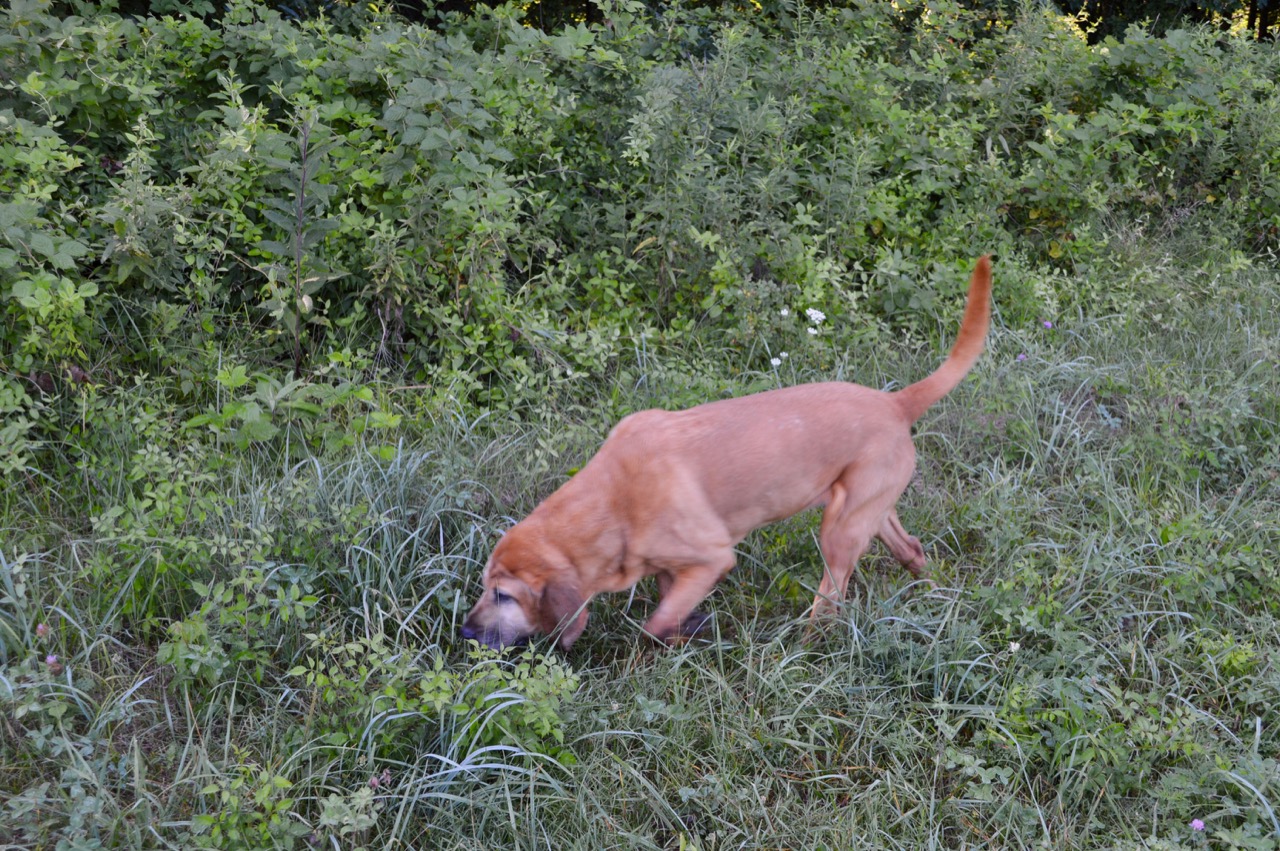 Sadie was acting as if she had picked up a field mice ... not with her mouth but with her nose. With her tail slightly wagging and her nose moving from spot to spot, I was sure it was a mouse she had corralled. 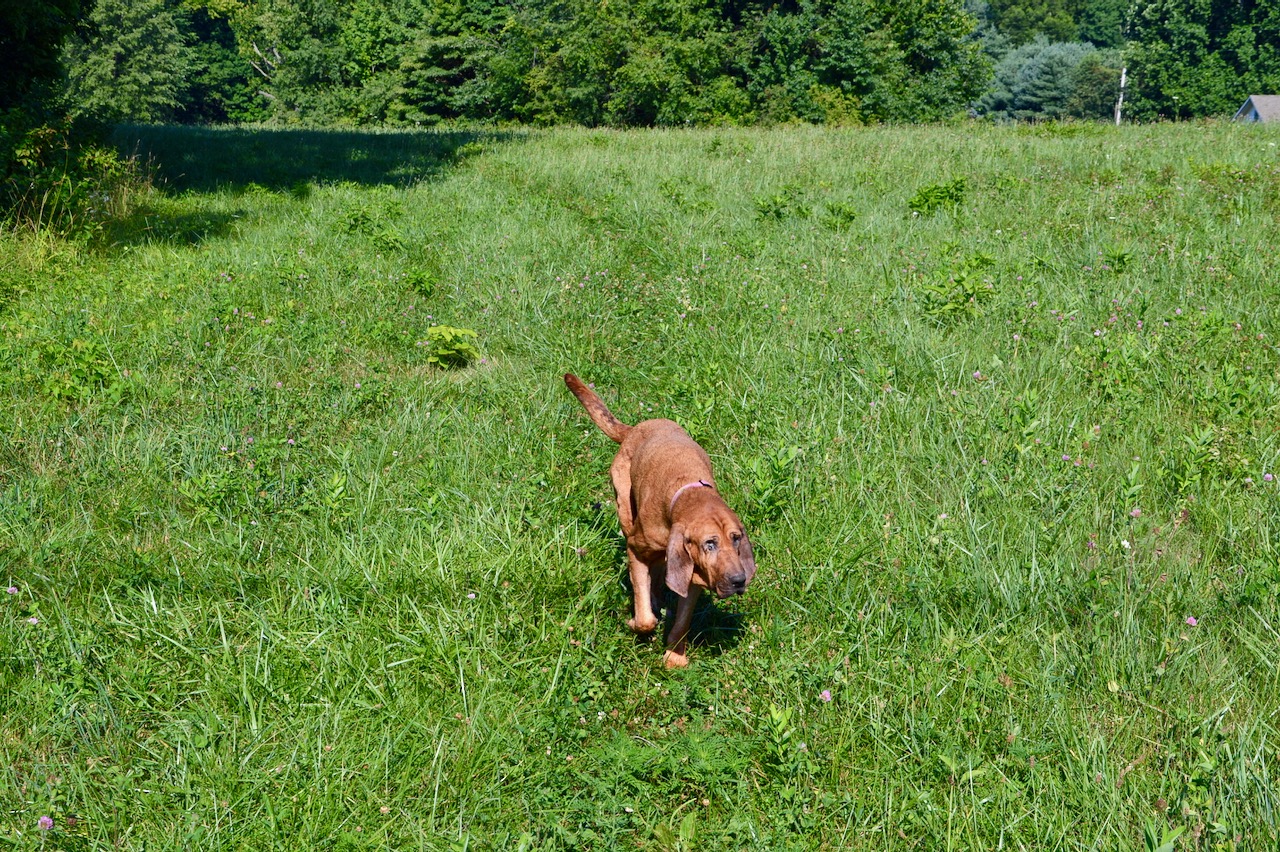 After a lot of begging, pleading and promises of dog treats when we returned home ... I finally got Stella around that first turn. Once she did that she settled in on her pace and seemed pretty content on this walk this morning. 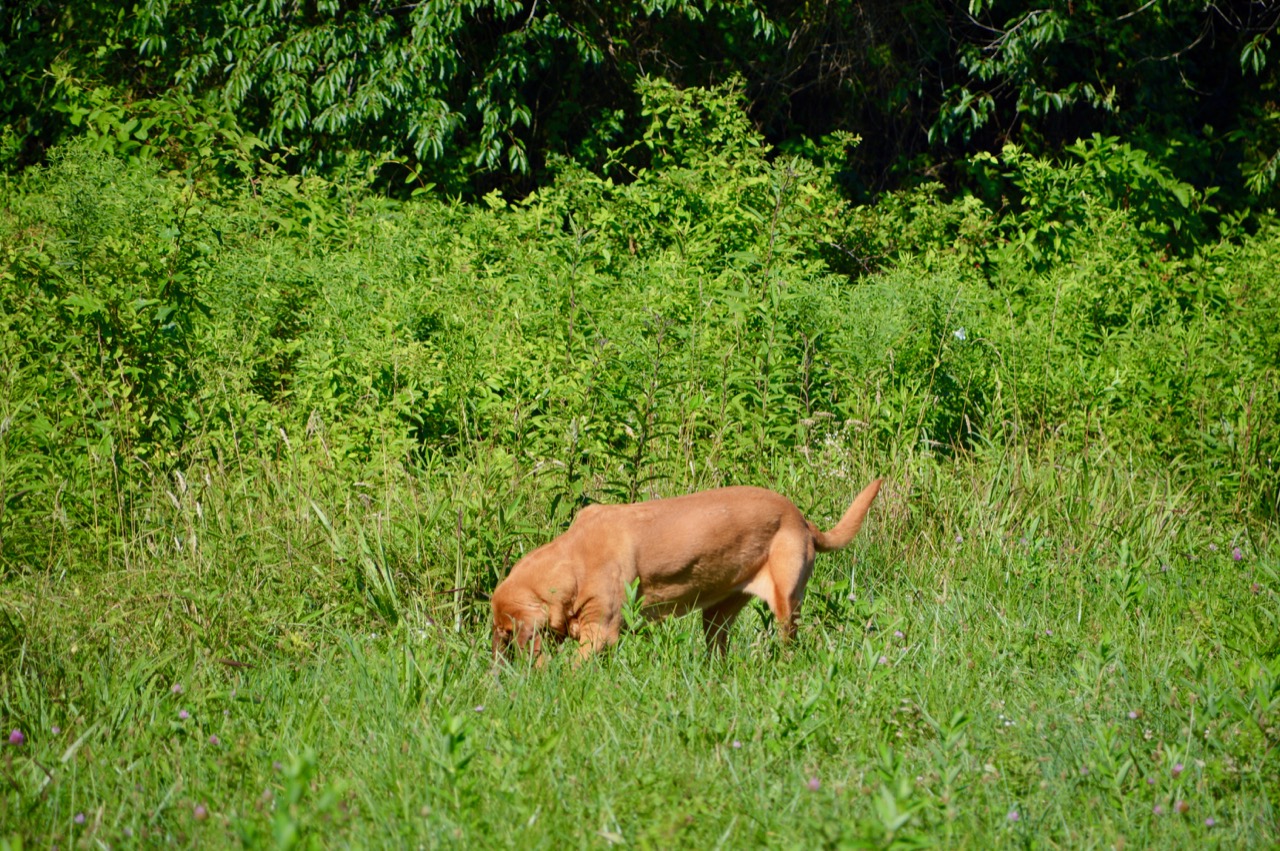 More proof that Sadie had 'cornered' a live field mouse. 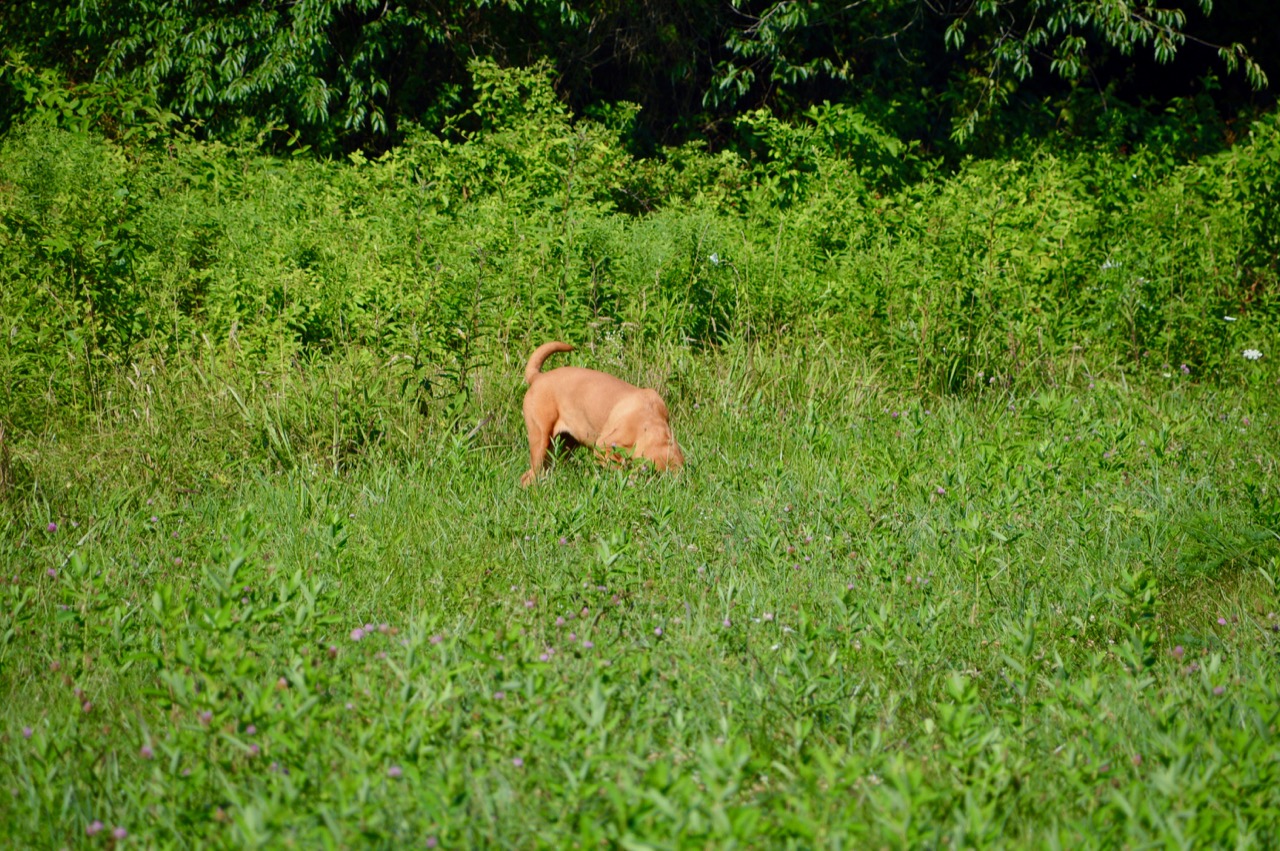 Unlike Winston, she will never pick up a field mouse with her mouth ... Winston would especially after the field was cut. 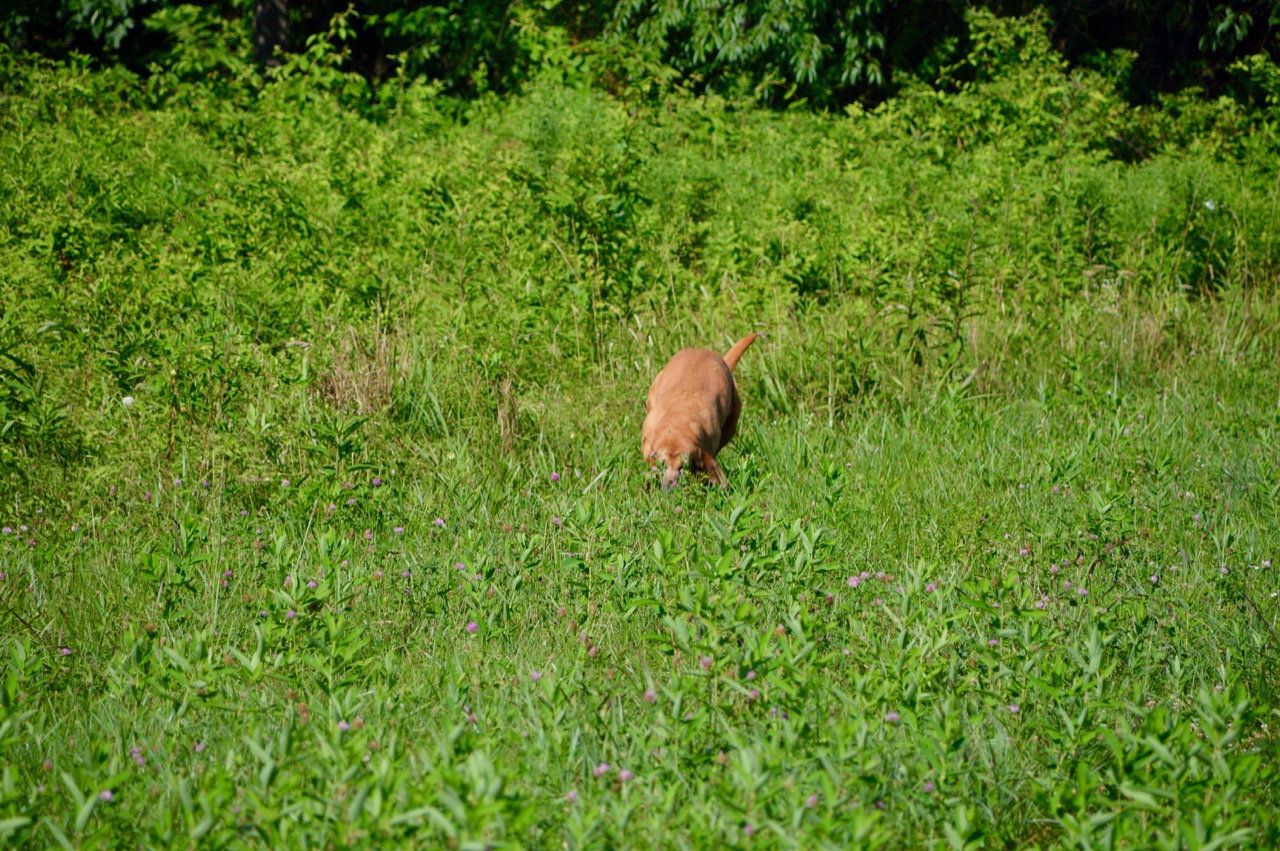 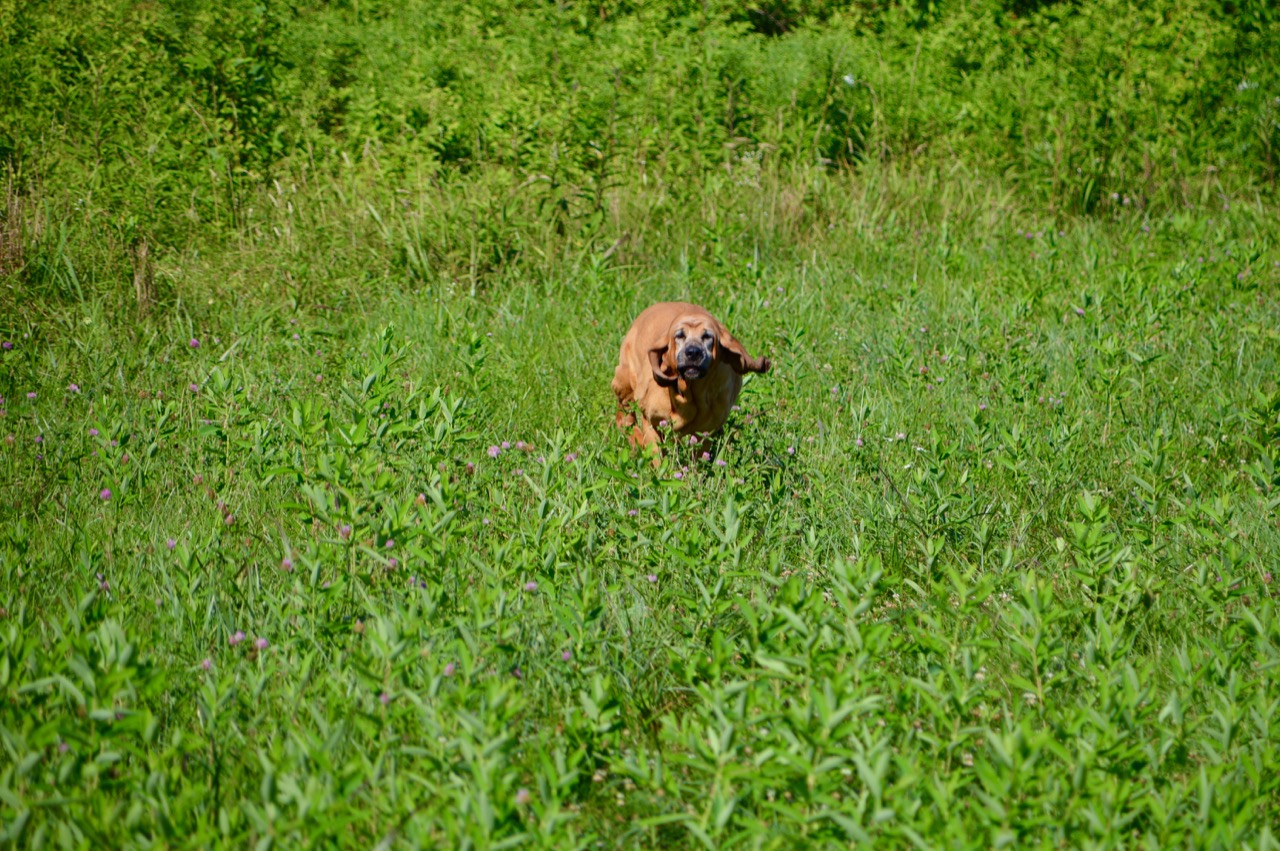 The thing about Sadie is, you never have to call her ... she will always come running on her own to catch up with me. 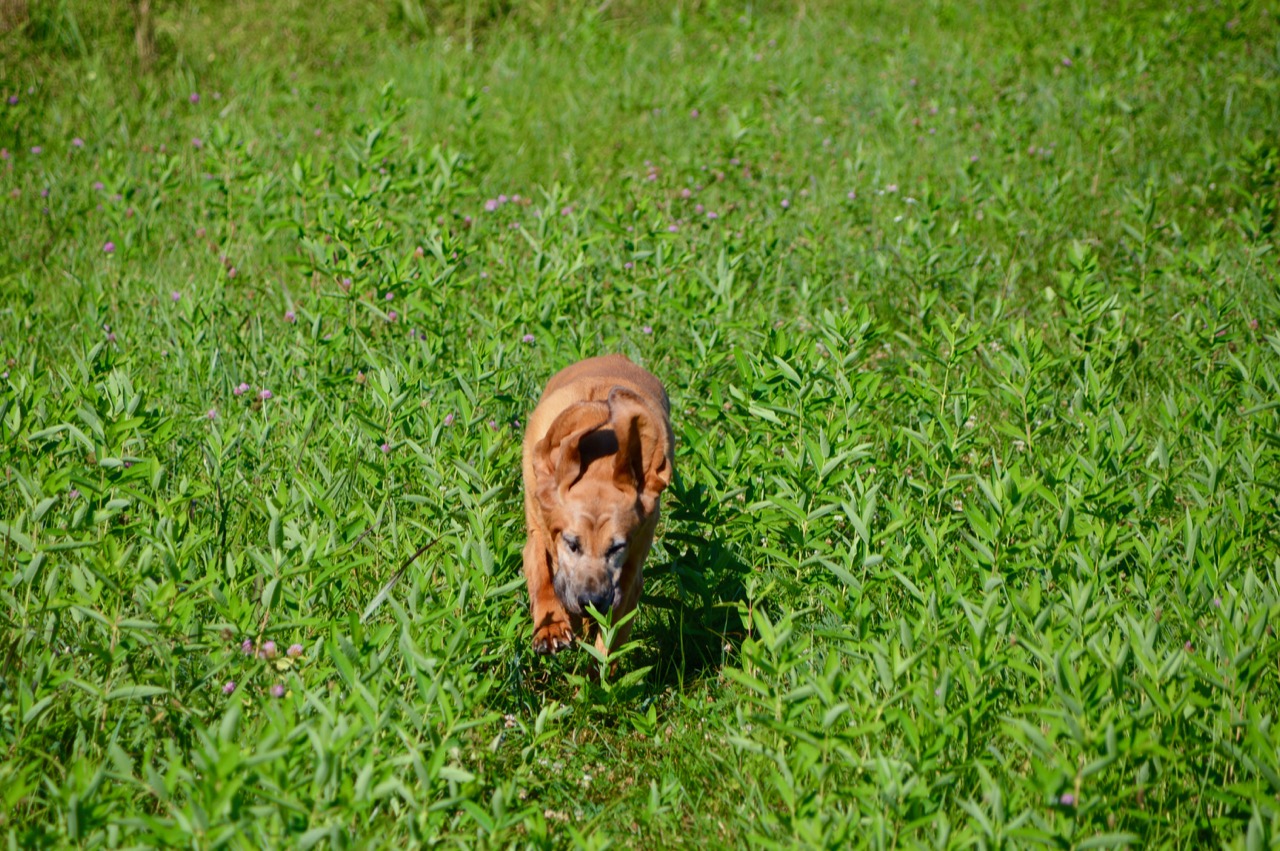 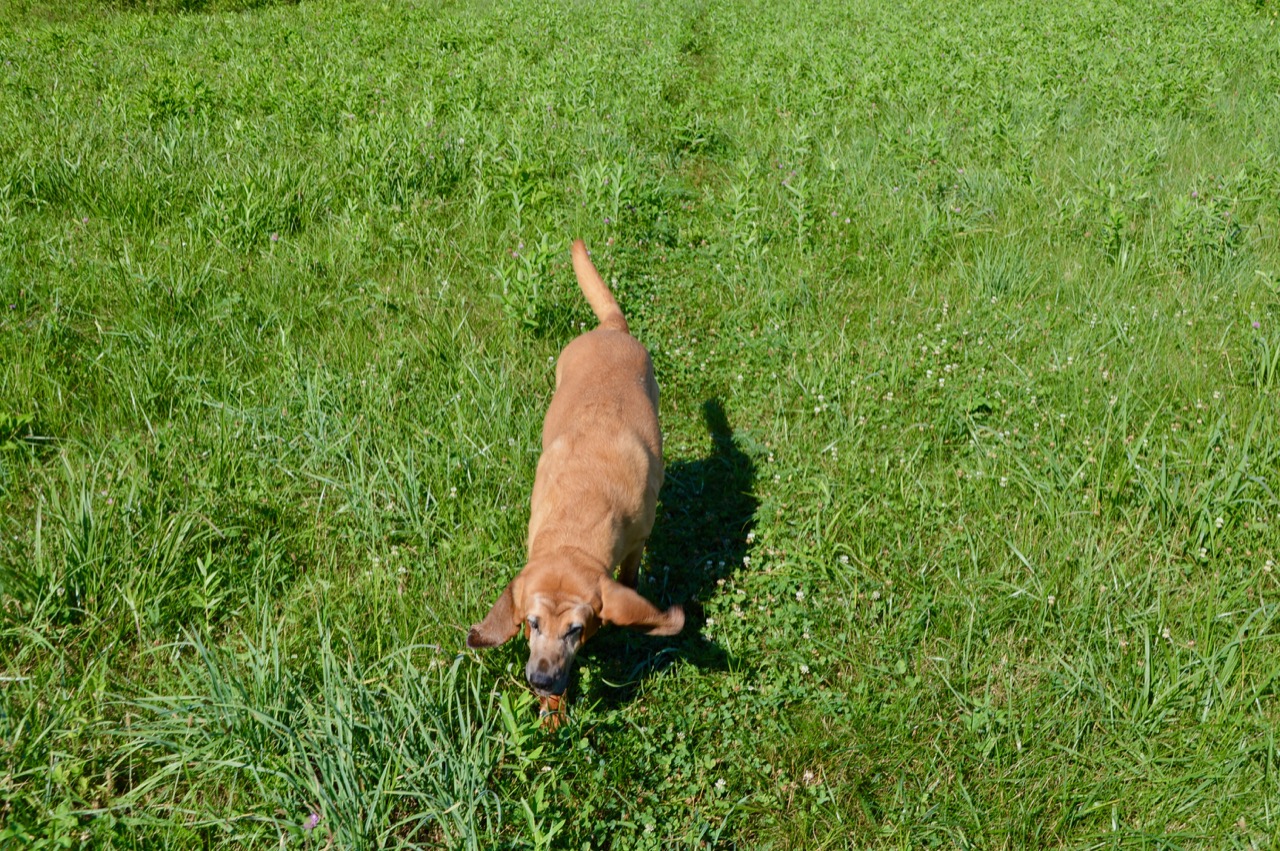 I was barely able to slide the lens down to 18mm to catch this photo. The rubber grip has stretched on the lens and at times makes it hard to turn the lens quickly. Searching online I found the problem was not only a Tamron problem but it also happens to Nikon and Canon lenses. 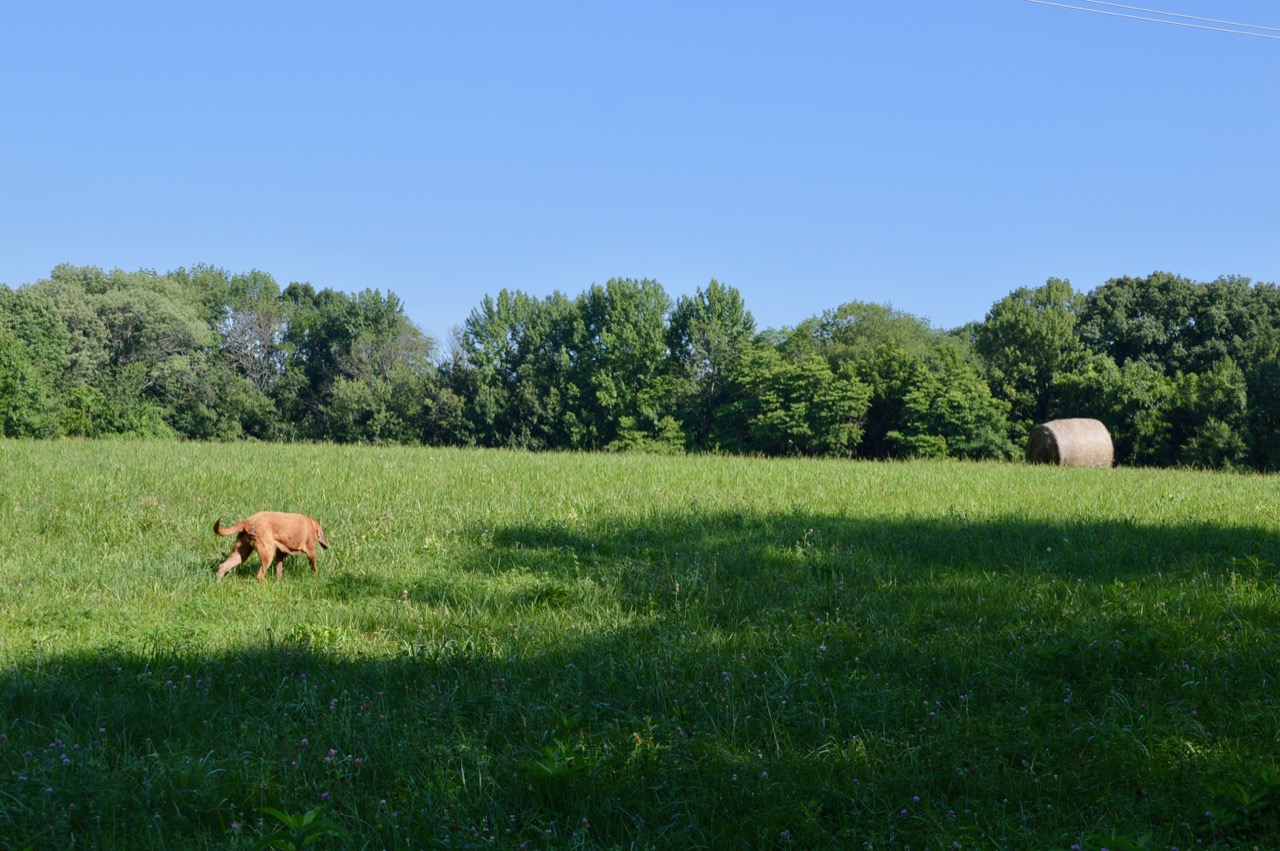 Just as I turned away from Sadie ... Stella was heading north at a fairly good pace. She was attempting her escape. 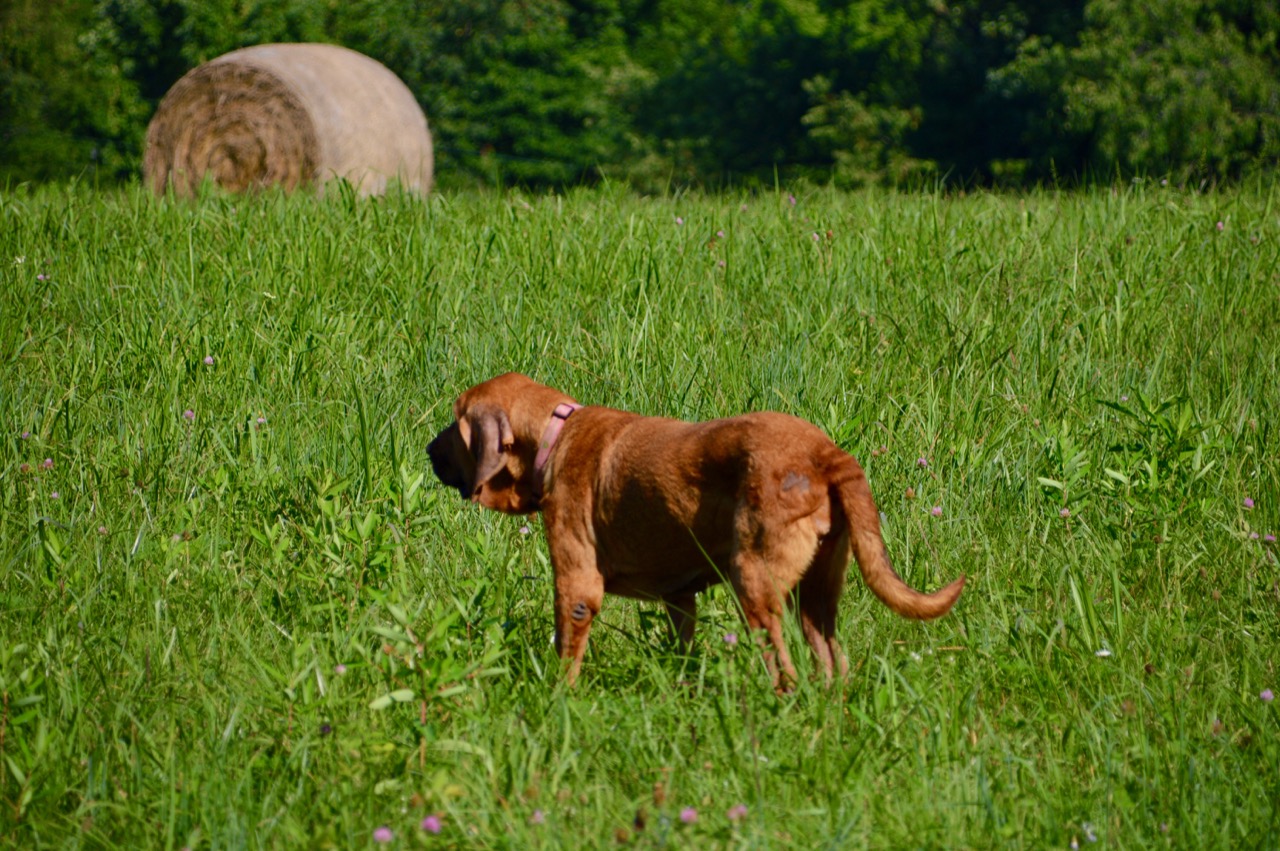 I yelled "hey" real loud and I was surprised she stopped and gradually turn and walked over to join Sadie. But that doesn't mean that she would keep walking as I walked the path. Oh no ... not Stella. 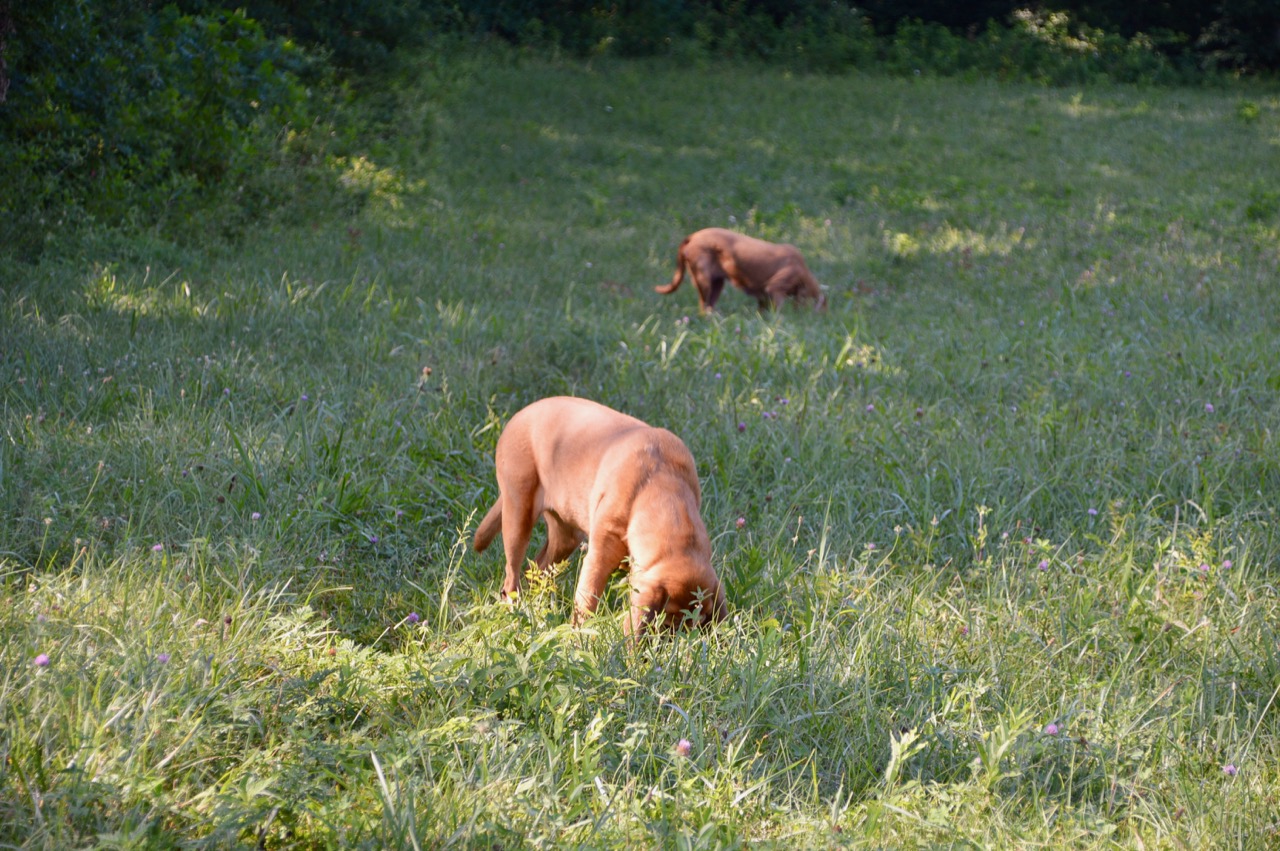 I had made the final turn toward home and when I glanced back both Sadie and Stella were way behind me next to the path ... I had to walk all the way back to Stella to explain to her the benefits of heading home with me, without further delay.  LOL 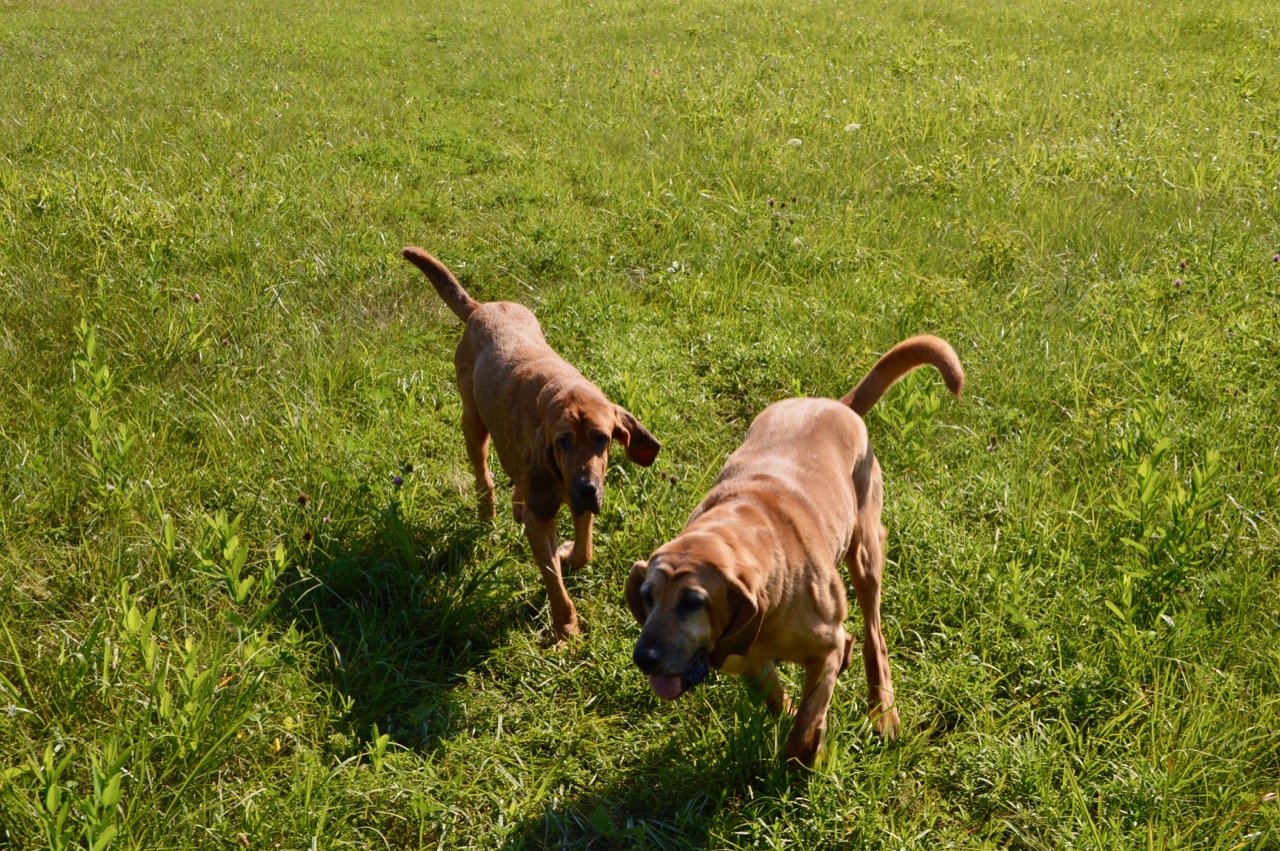 Both hounds decide on the way back if we follow the normal route at the "Y" or take the alternate route home. This morning Stella followed the alternate path. 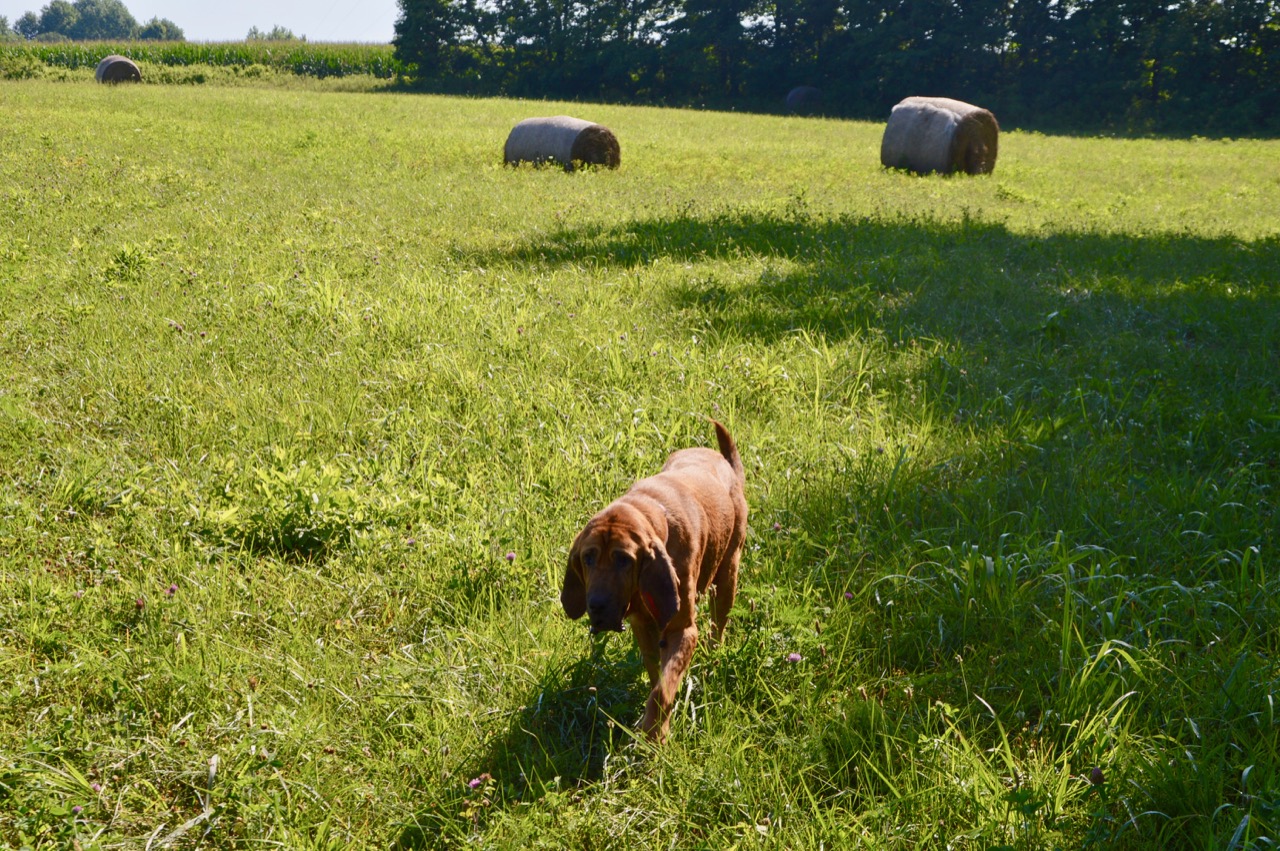 I should have kept her in front of me, but she walks so slow that I have to pass her ... today that was a mistake. You remember this is a new week, it's Monday and soon into the walk Stella was showing me she has new plans starting today. She attempted one escape in the back of the field ... 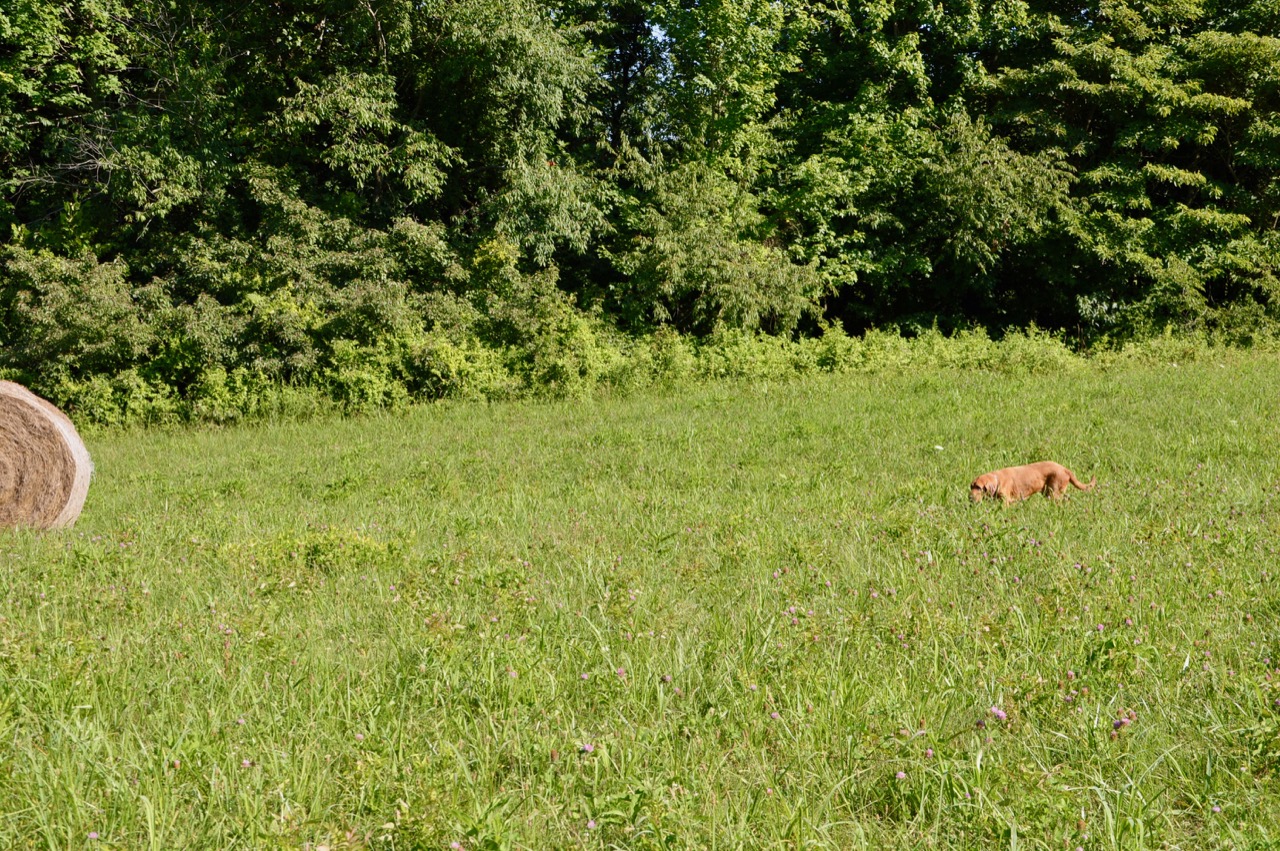 I don't think I had walked more than 30', when I glanced back at Stella and she was already heading to the woods behind the neighbors house. Once again I yelled 'hey' loudly and she slowly turned our direction. It took a while but she finally stepped into the yard a few minutes later as Sadie and I waited at the corner property pole. 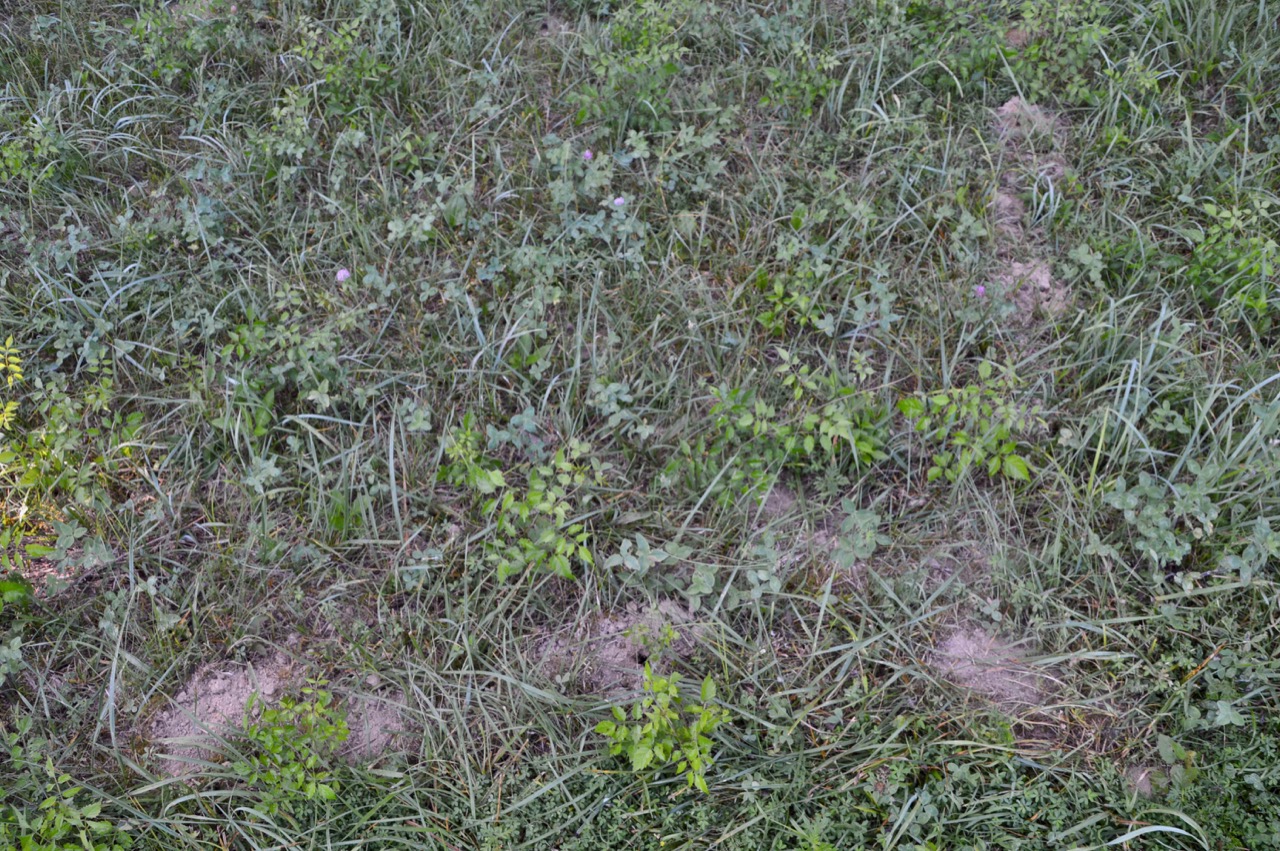 This is one reason I have a hard time to keep the moles out of my yard. Out in the field near the brush line I saw fresh mole activity. Now this is pretty far away from the yard but there were two to three spots like this in he field. 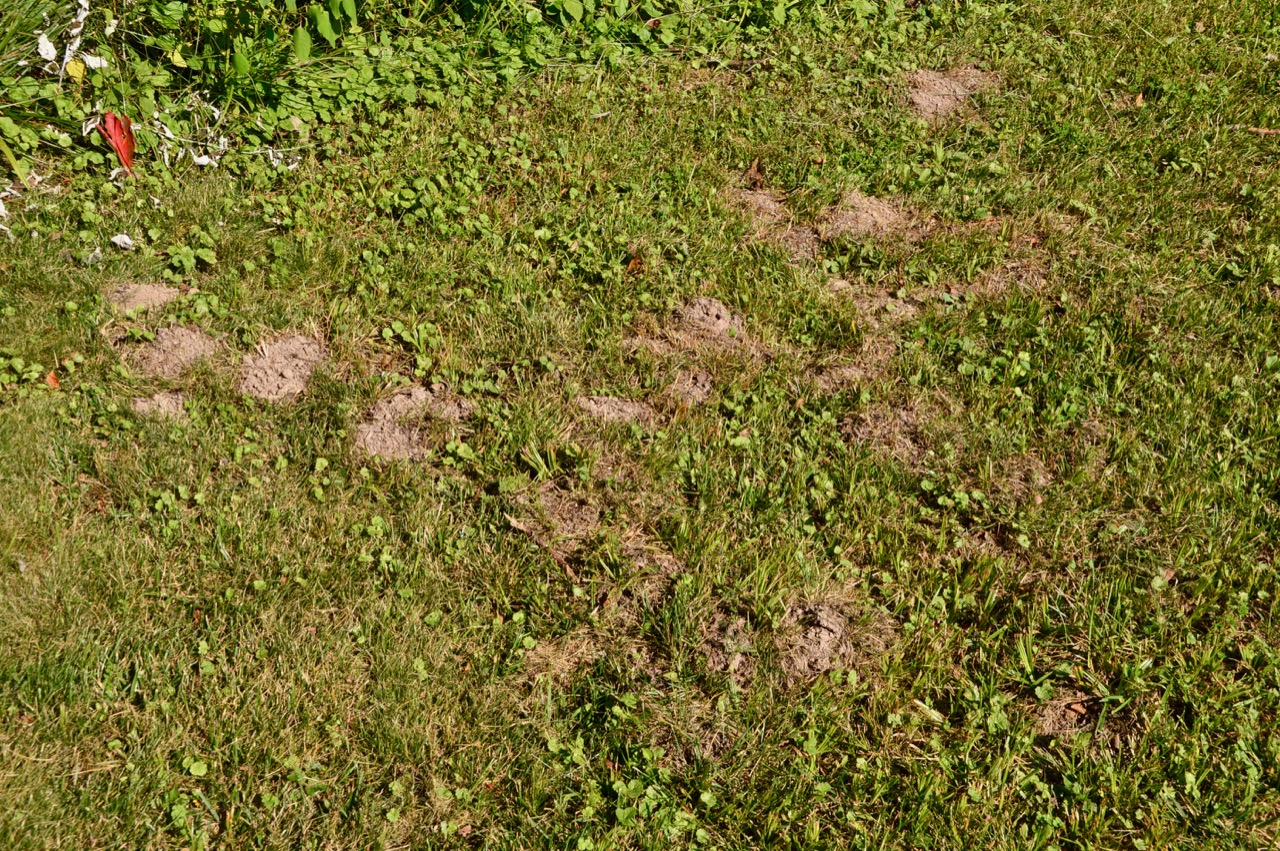 So it was not a surprise as Sadie and I stood in the north part of the yard waiting for Stella that I saw new mole activity in my yard. In March I spread some grub worm killer I had found in the shed and did the whole yard. It did a very good job so far this summer keeping the moles completely away. I might have to apply another small bag of the grub worm killer right before the next rain. 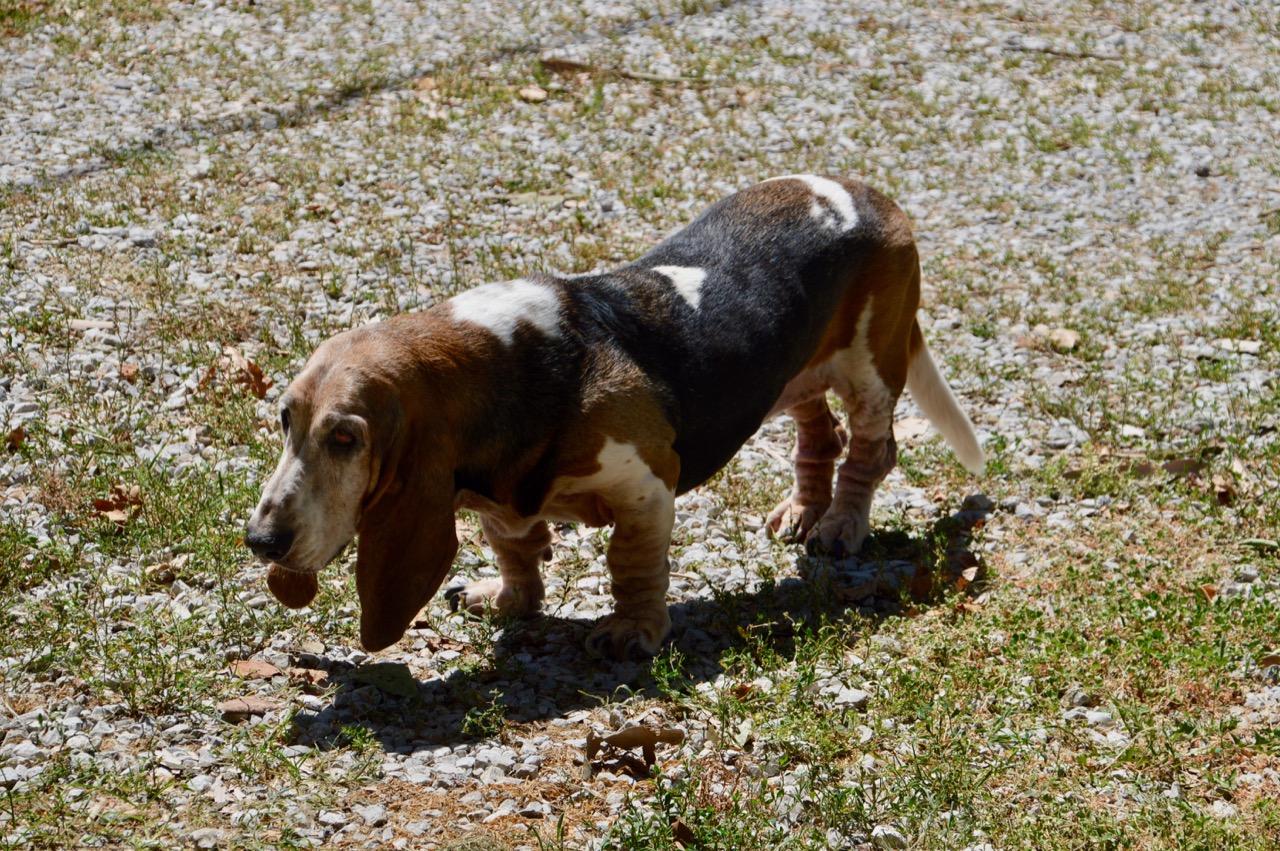 All of the hounds let me know by 12:30pm that I was a little off in my prediction of late afternoon hitting only the mid-80's. While Heidi stood there as her inner thermometer gauged the real temperature, Sadie and Stella had not moved off the driveway. 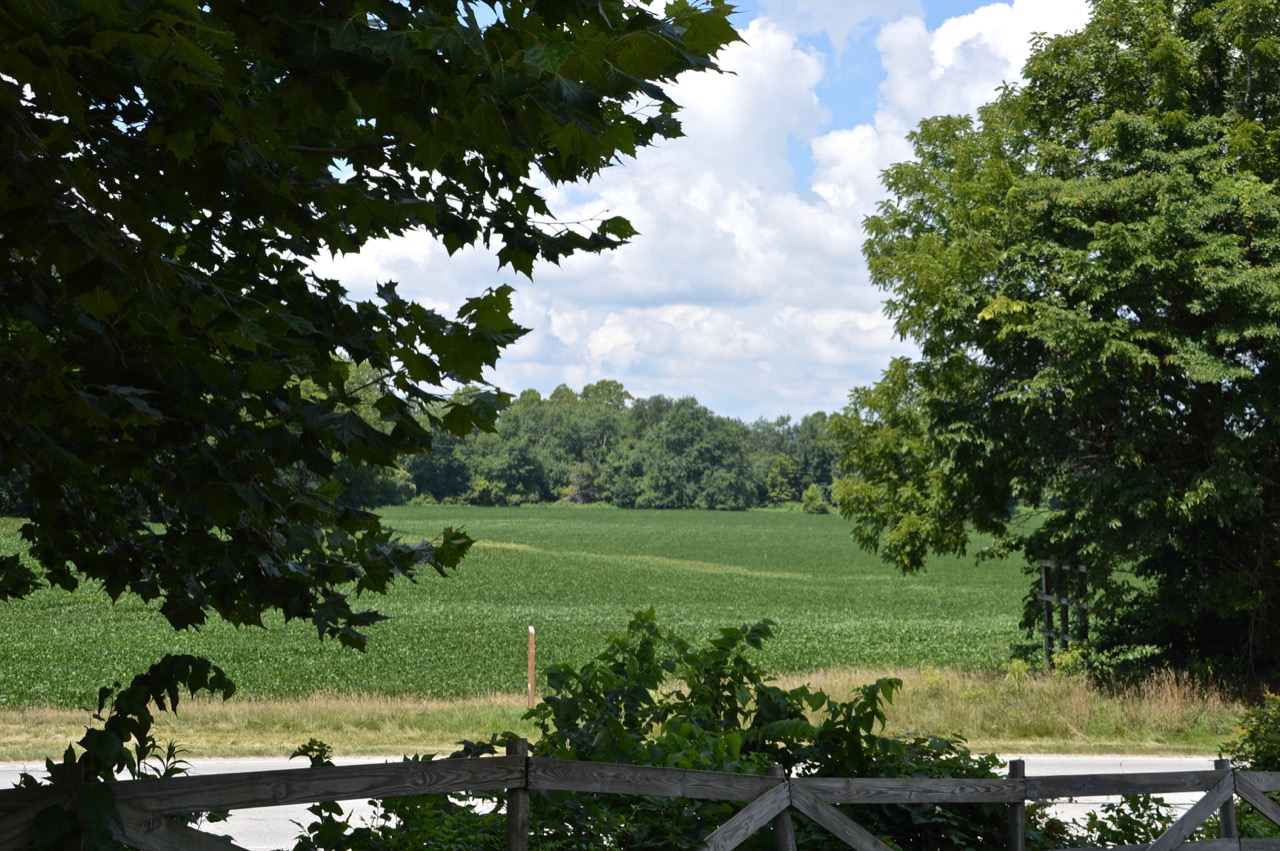 When I drove over to the recycling center this morning have of those miles to and from are on highways or country roads cutting through corn or soybean fields. With all the rain we had this spring and the perfect planting the farmers did with rain flooding out their crops ... it looks like a stellar year for the low farmers harvest in the fall. Every field I have seen locally has the perfect look to it. 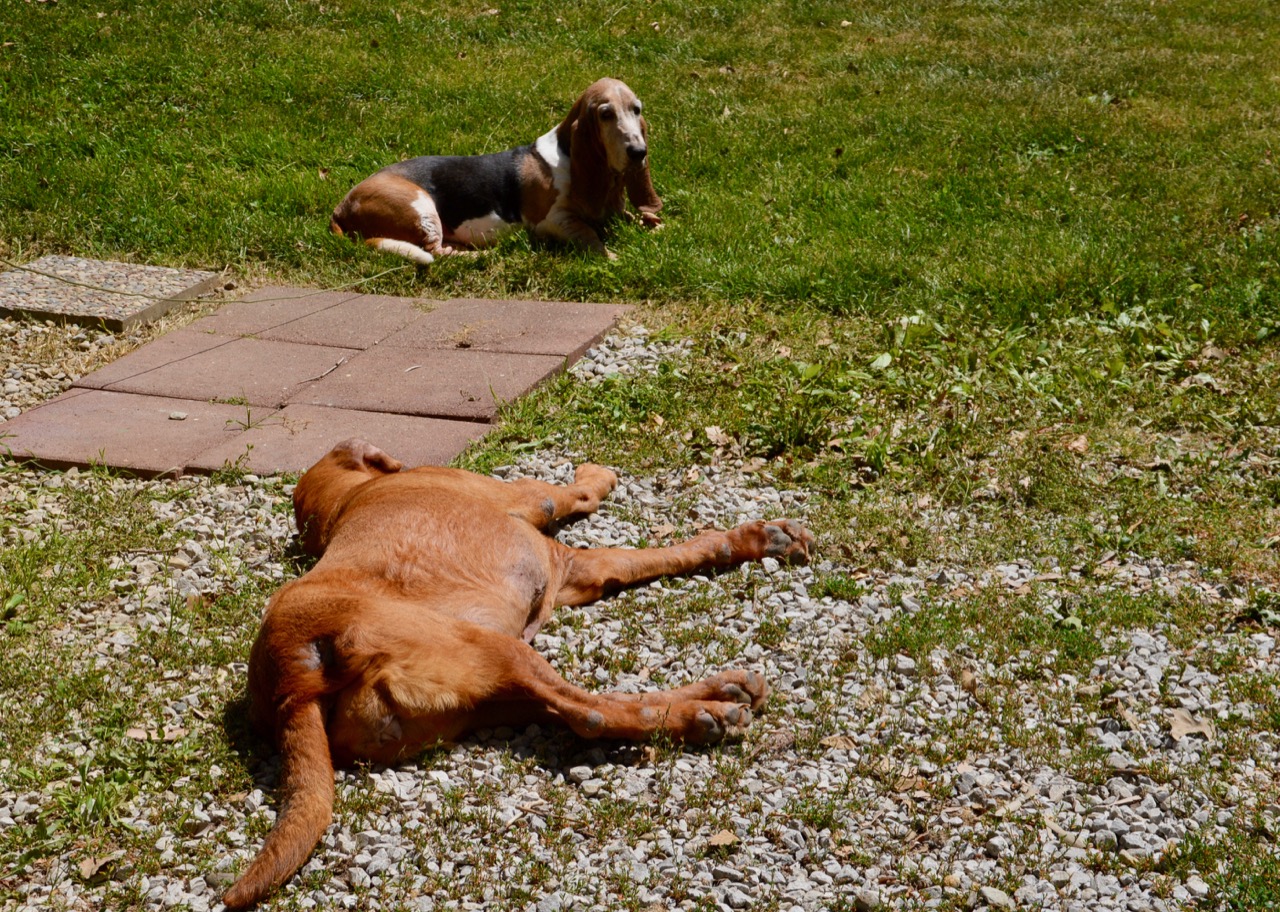 While I walked around looking for any signs that my weed killer was starting to work, with rumors that might take weeks, Stella decided it was a perfect time for one of her short after lunch naps. Even Heidi had moved over to her favorite spot, a place that she will sit when I let her out alone when she goes to the door. It is really nice to have three hounds that don't wander off most of the time. Heidi never does, of course you know Stella's background and there are just a few times that Sadie will but that will be in the field or woods. 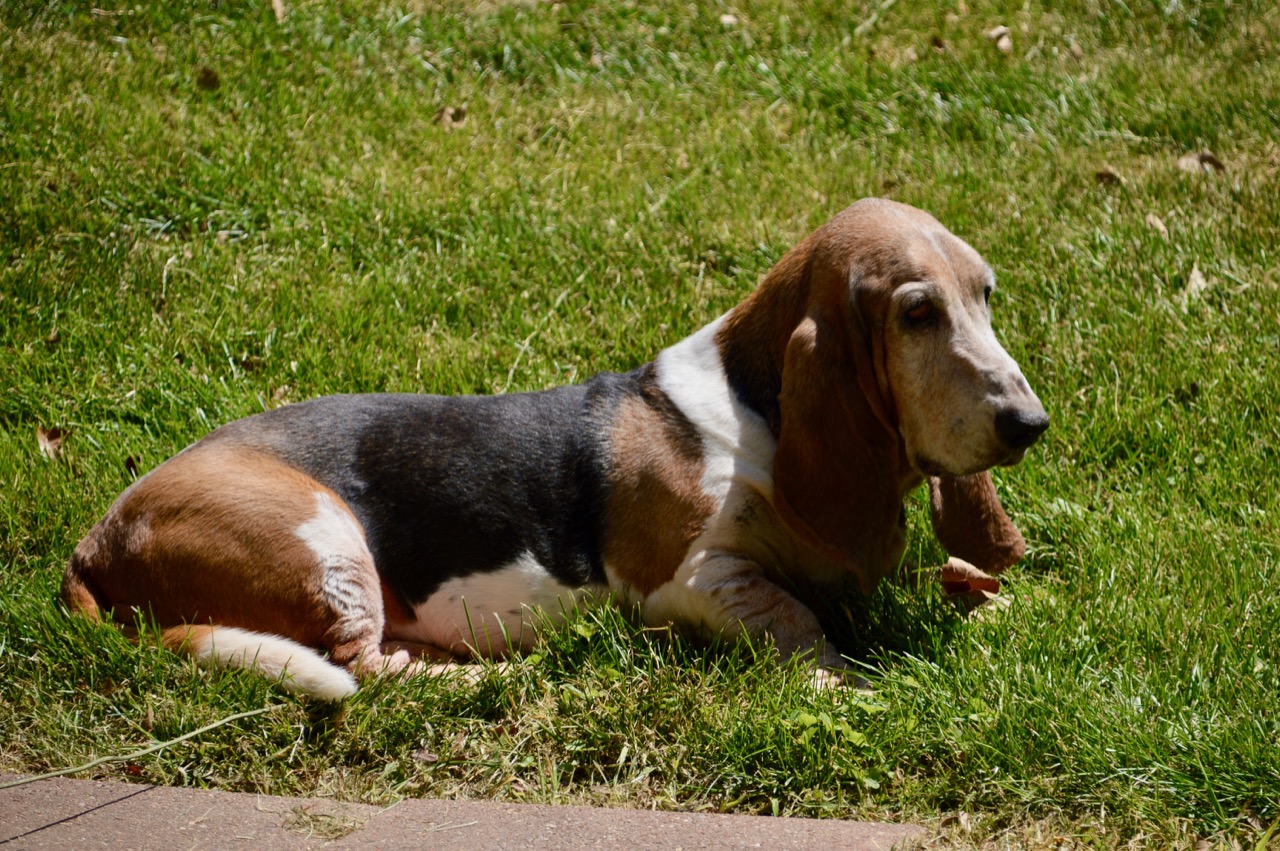 This is the look or one of the looks of a content basset hound. 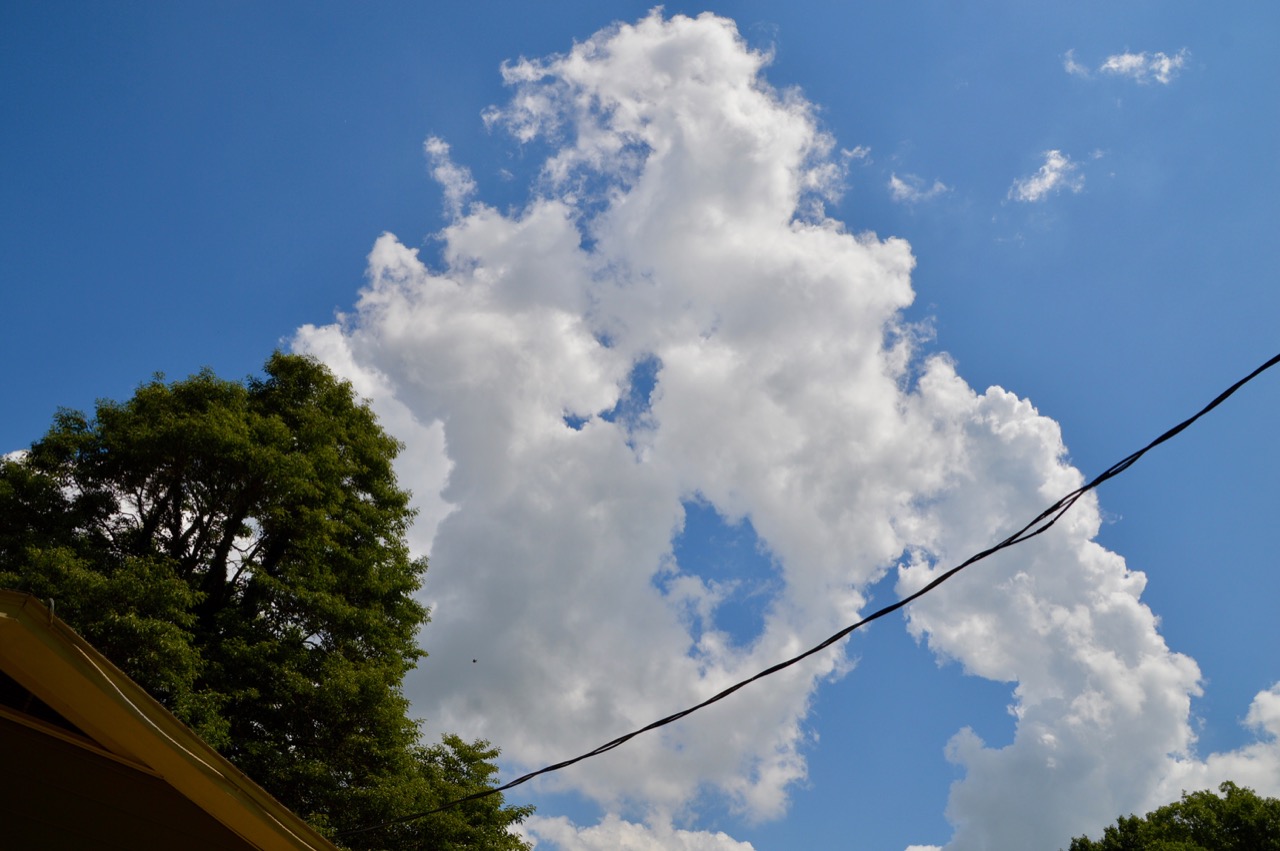 The sky seems so blue when the clouds are large and puffy ... I guess I should have cut out that electrical wire from the photo. 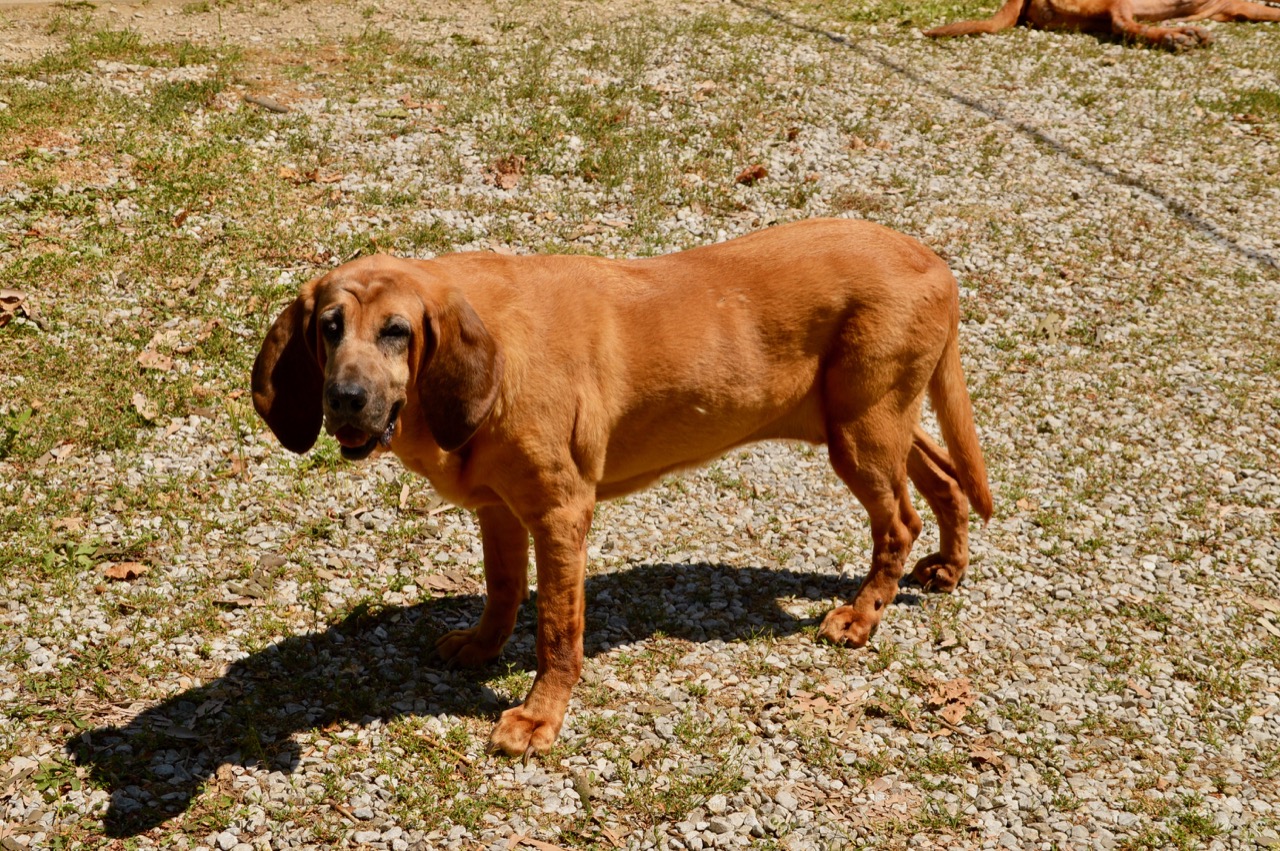 Sadie wanted a walk but knew it was too soon after lunch. She can tell it's pretty hot by her open mouth but hardly any panting. As I stood talking to her I could feel that it sure felt like 90°. 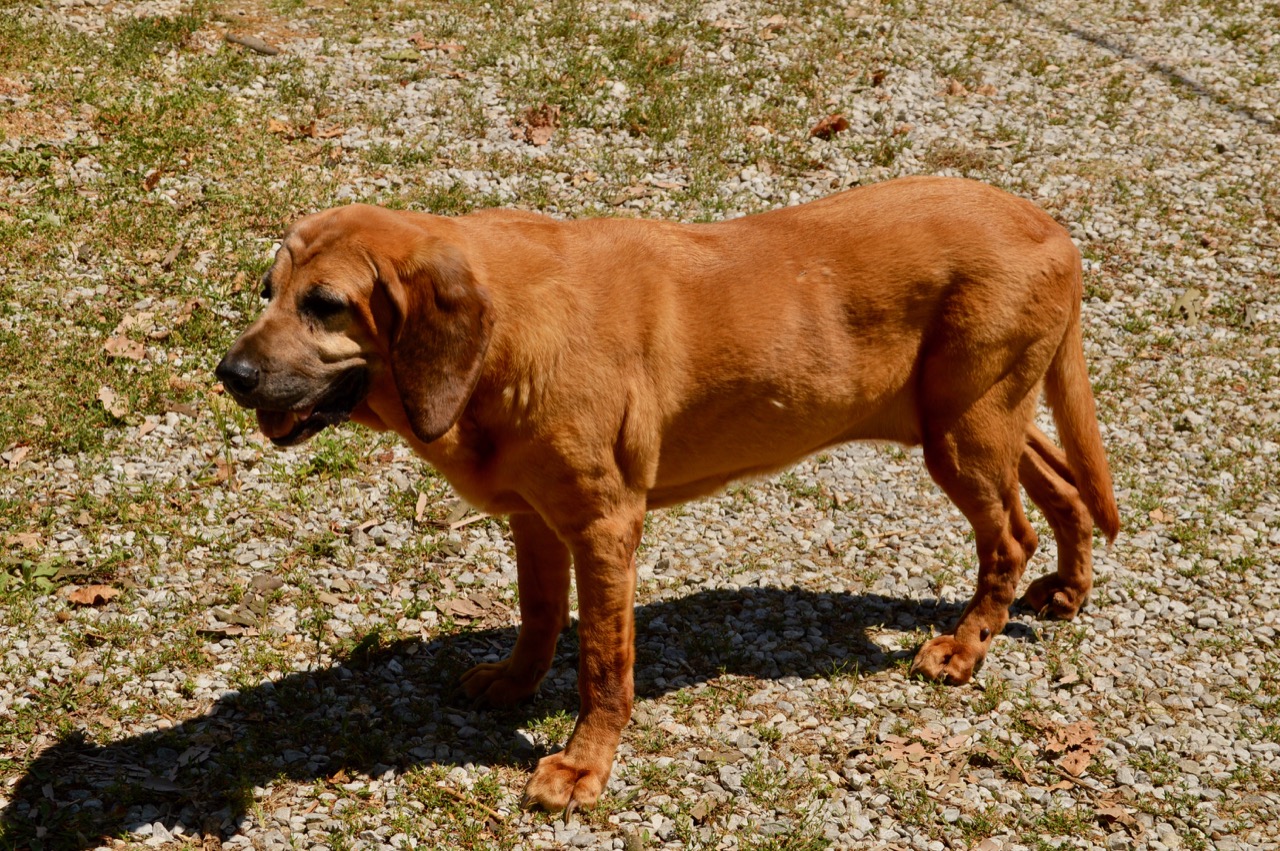 I decided it was the perfect time to cut the toenails of all three hounds so I headed inside to grab the nail clippers. One step back outside and all three hounds were standing in front of the step wanting back inside ... the plan to cut toenails had been delayed. I hate cutting them inside even with a great vacuum. 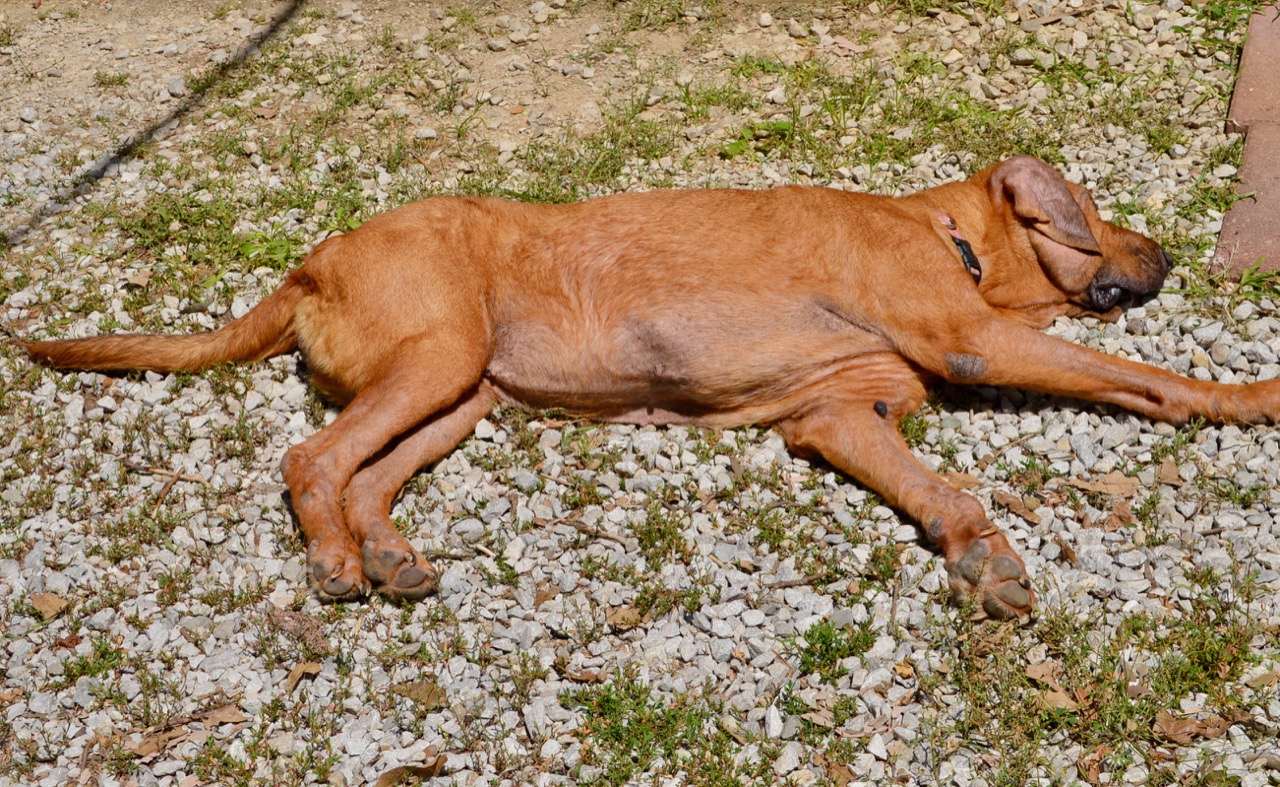 Stella is due for a bath. Luckily she loves having the water run over her ... Sadie sprints away all over the house until I give up. So I have had to trick her in the past to go for a ride, then have the groomer do the job. It's nice now that there is a dog groomer at the vet we use.

With most things finished outside and the temperature too hot to do much, I migrated back inside the air conditioned room to clean the house and then start a new book. I am feeling it's going to be biography's for a while and they are all on my bookshelf here at home.

It was the normal routine this afternoon while the hounds slept I watched a tape copy of the Tour de France Stage 3 and the F1 race that was on Sunday. The DVR was on of the best inventions ever, right behind Gorilla Glue.

We are headed out for our 2nd walk of the day and those are always without the camera and Stella on a leash. That is because it is usually to hot to let her roam at her on pace. She doesn't mind the retractable leash and still has 25' to veer off the path.

Reds baseball tonight, maybe a movie, or reading my book.