Stella Is A Funny Bloodhound 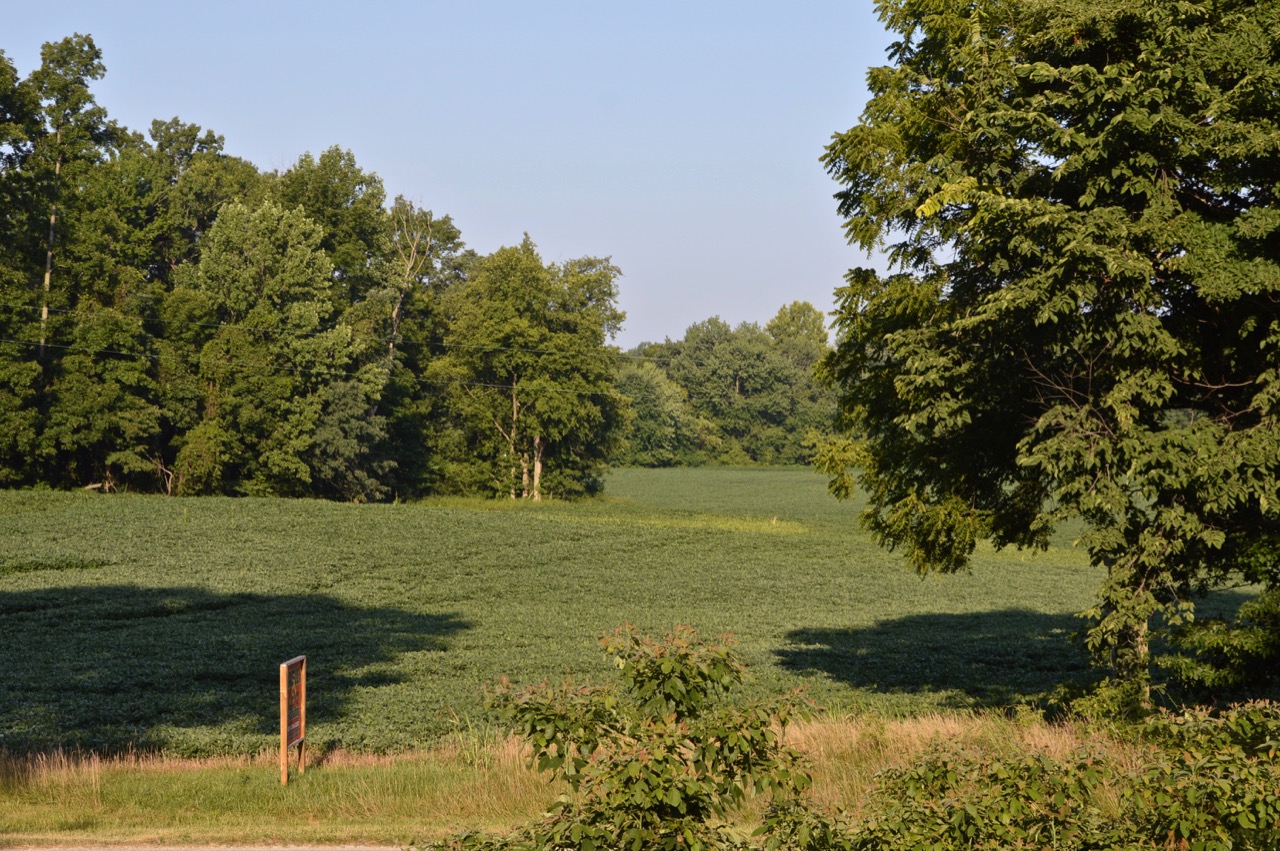 It's hard not to start taking this beautiful weather for granted. It's Indiana and it will change eventually but right now I'll take what it gives me day after day. Since I am a fan of hot weather, the heat and humidity does not bother me. Spring and Fall are still great times of the year also, it's those weeks in December and January where you think about packing up, throwing a for sale sign in the front yard and get out of town. You can see we started our walk this morning in the same weather of low humidity, high 60's and most of our path in the shade. 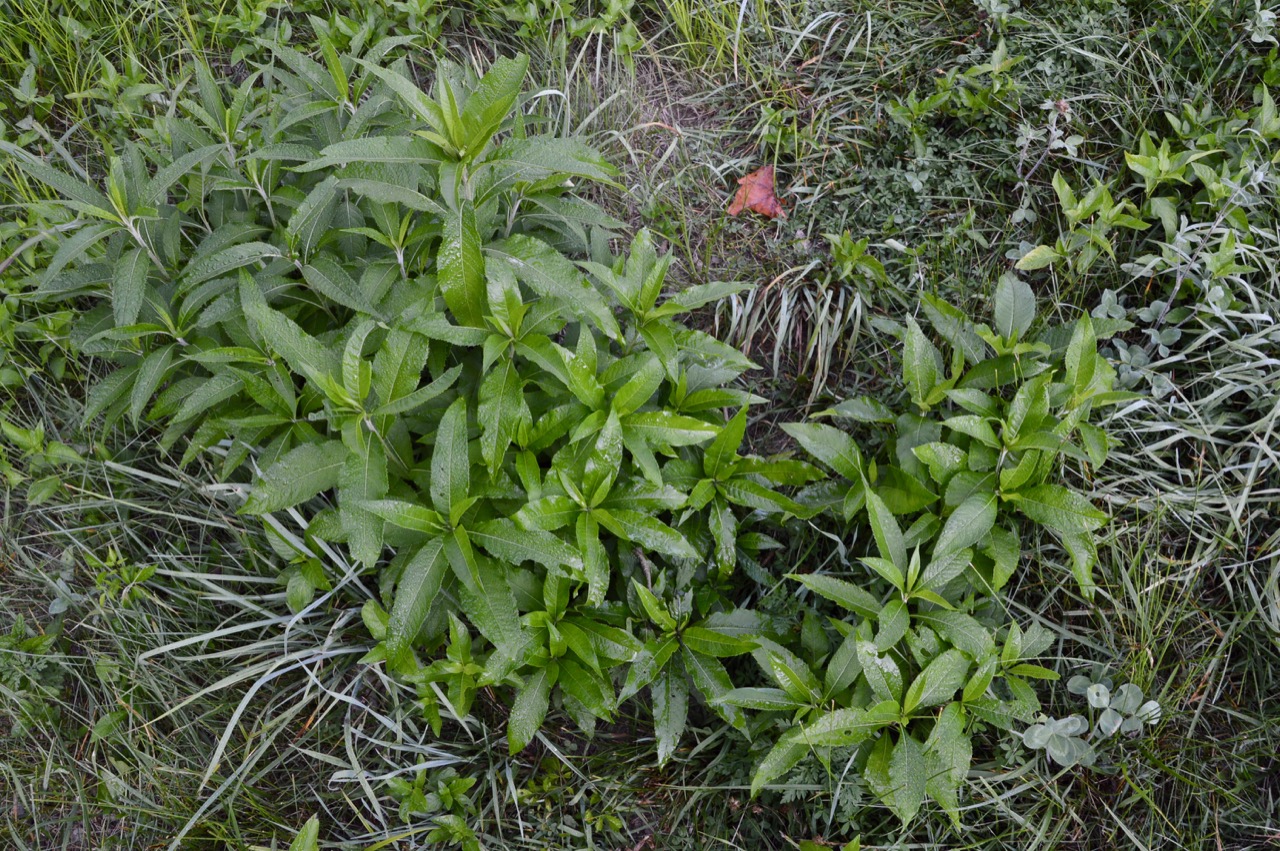 This will give you some idea just how wet the field is. It will also show you just how much of the field is full of wild plants, some weeds and very little grass. 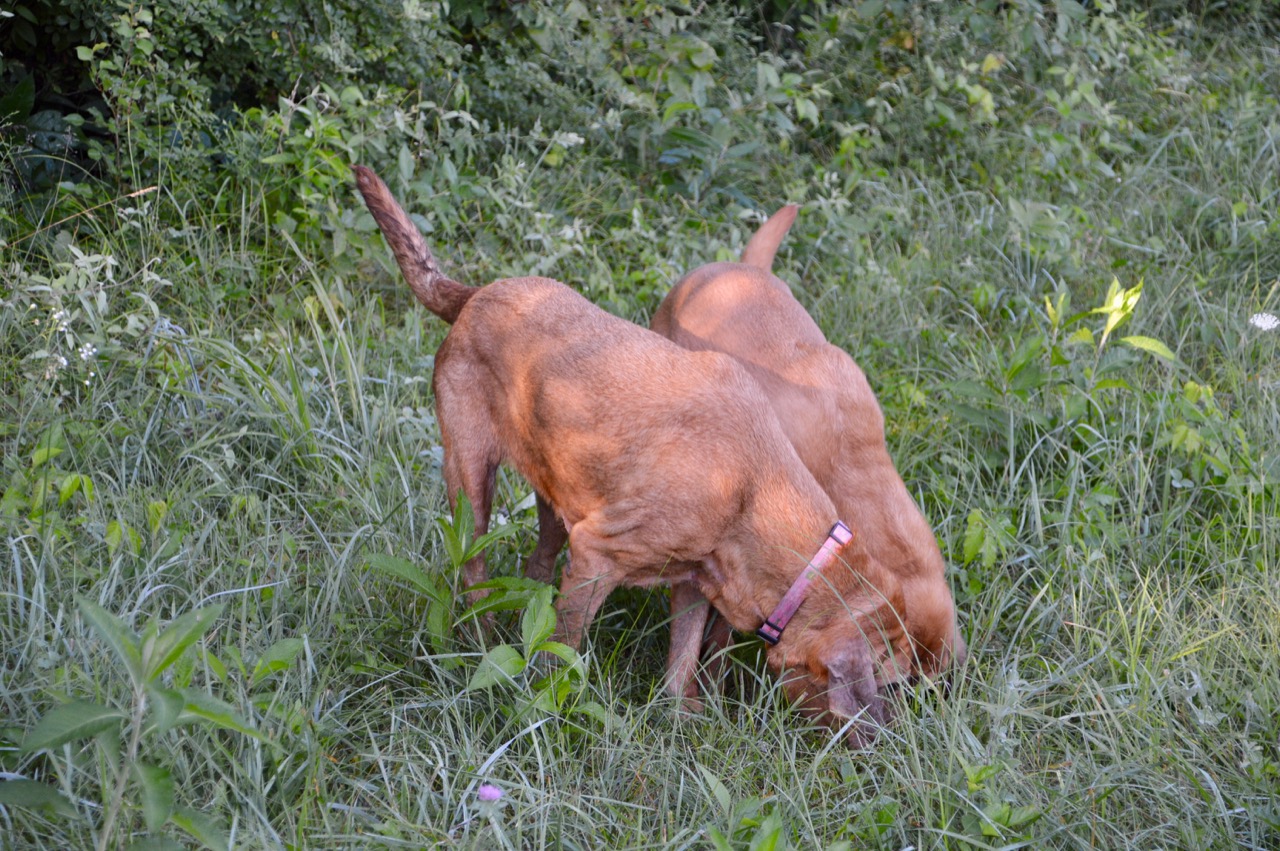 Can anyone tell me what the 'theme of the walk' was???  You guessed it, and it made the walk slow and slower. 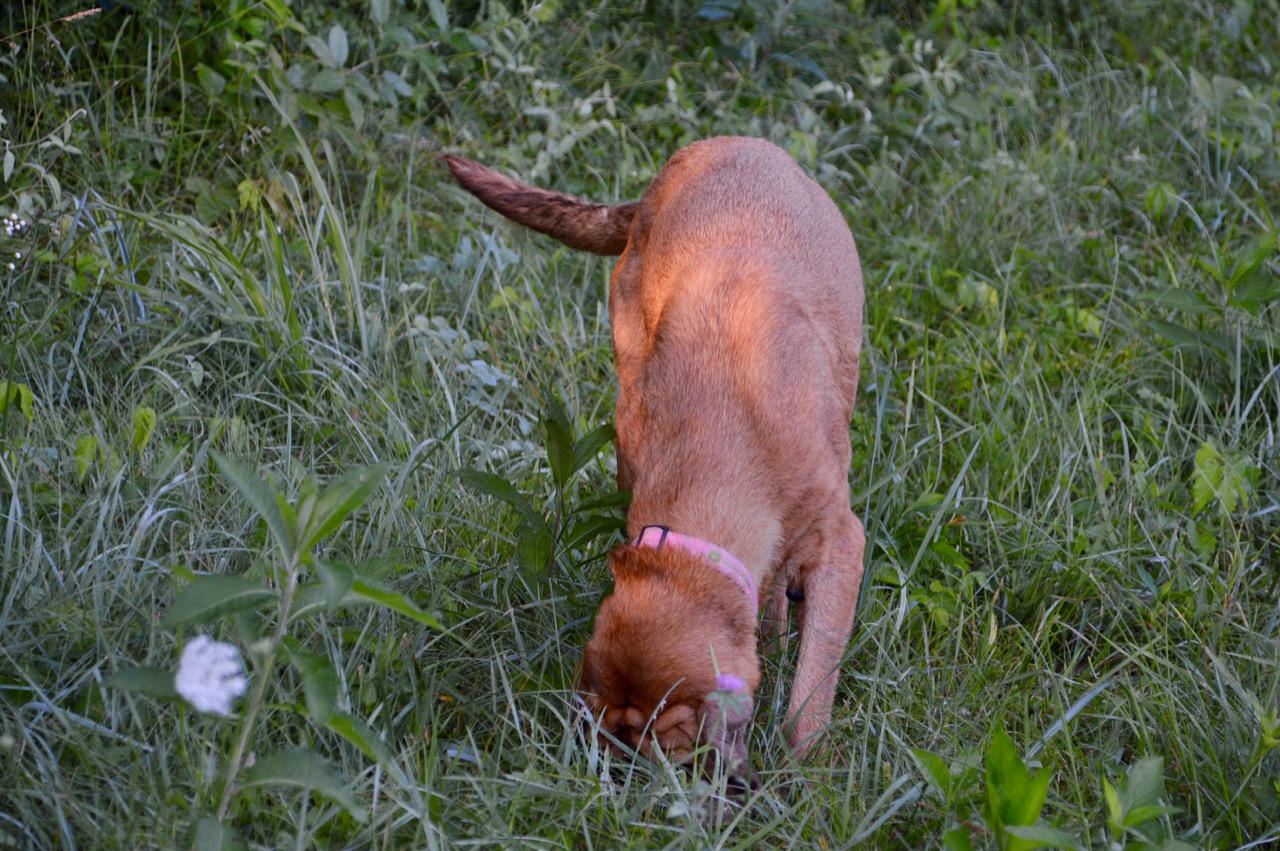 A fine example of Stella's blocking out all verbal comments, direction or begging. 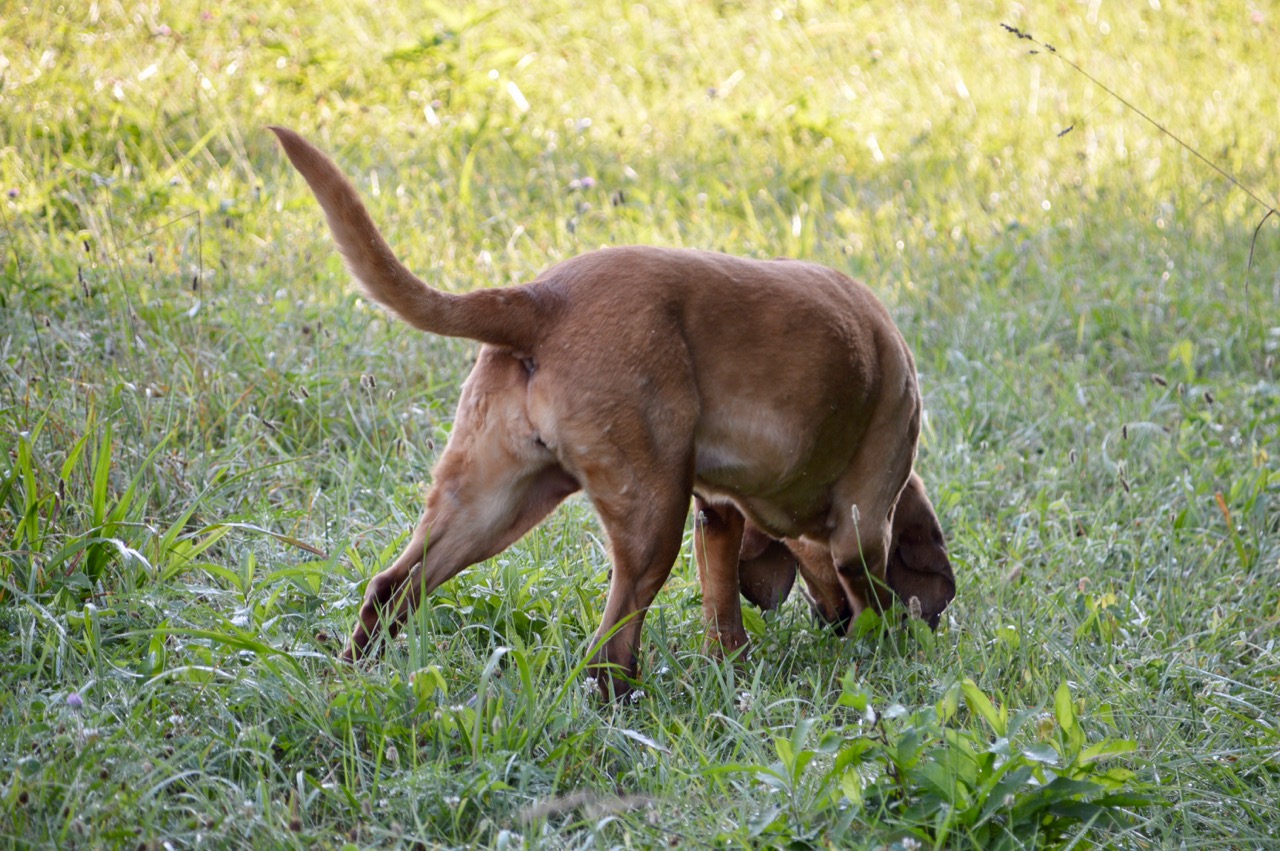 That spot might look huge but it is a 1/4" thick, a little less than Wednesday when it was discovered. This morning there was no fluid that I could feel. There isn't a feeling of a 'rock' in that area but the same feeling if you were rubbing your hand along the side of her. I just brushed her undercoat out yesterday afternoon and can see more coming out this morning. 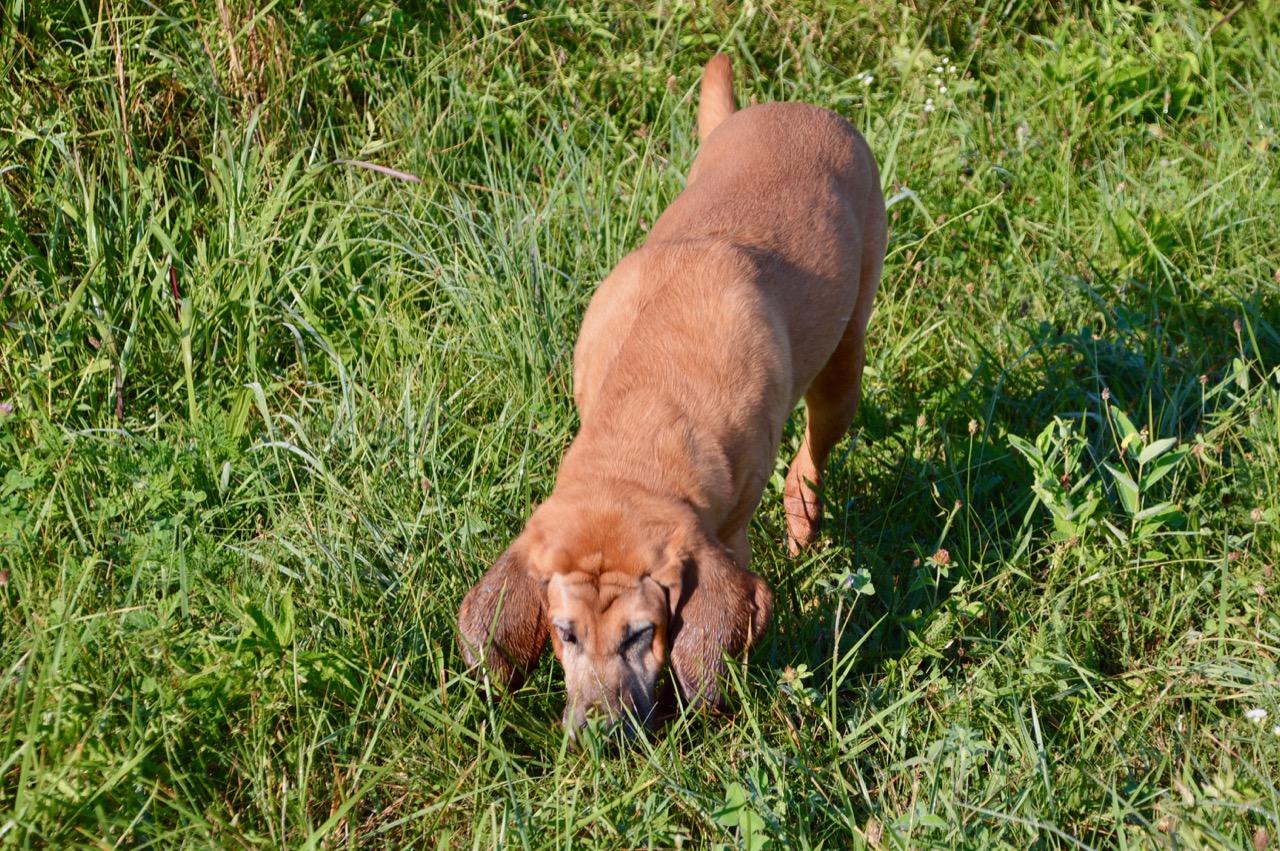 It was going to warm up to 91° today but with the humidity so much lower than normal, it doesn't feel that bad when we take our early evening or late afternoon walk. Stella now waits for me in the carport for me to hook the retractable leash to her collar, only on the afternoon walk. 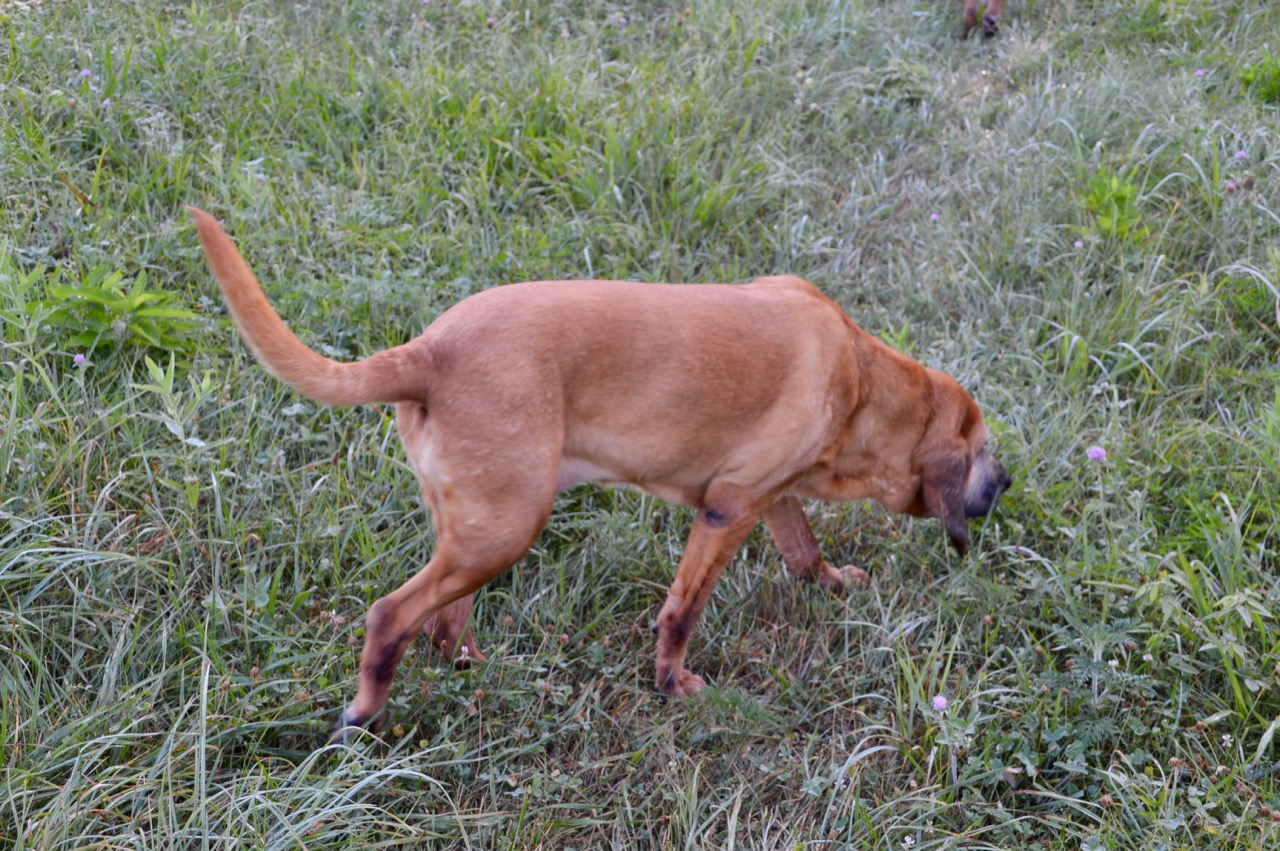 Here is a good photo of Sadie's right side, the lump was barely noticeable this morning. 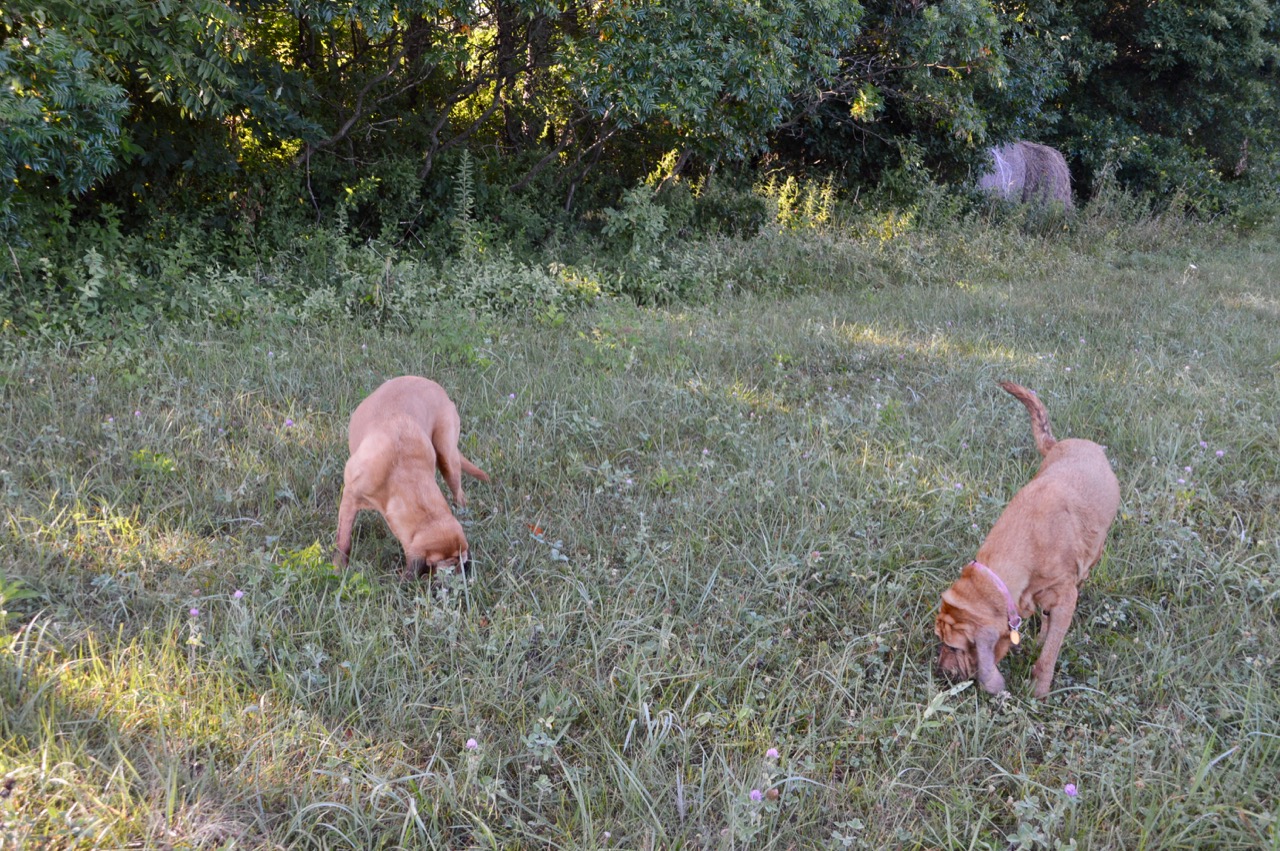 I was at the point of making the final turn toward home. Needless to say I had to wait quite a while until the hounds joined up with me. I decided while I waited I'd take a few photos of any flowers I found. 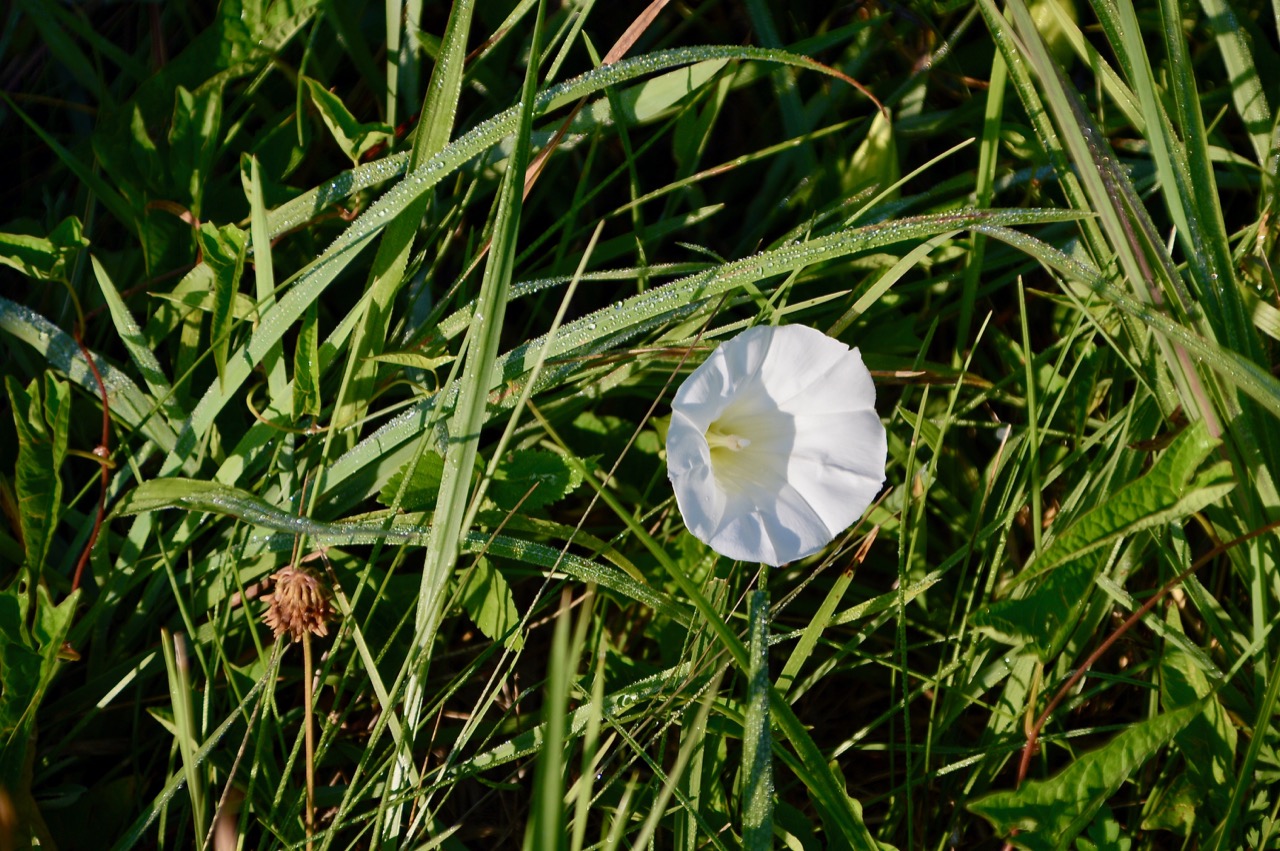 Galen posted on her blog last Friday that these are poisonous. This is the only one I saw in the field this morning. 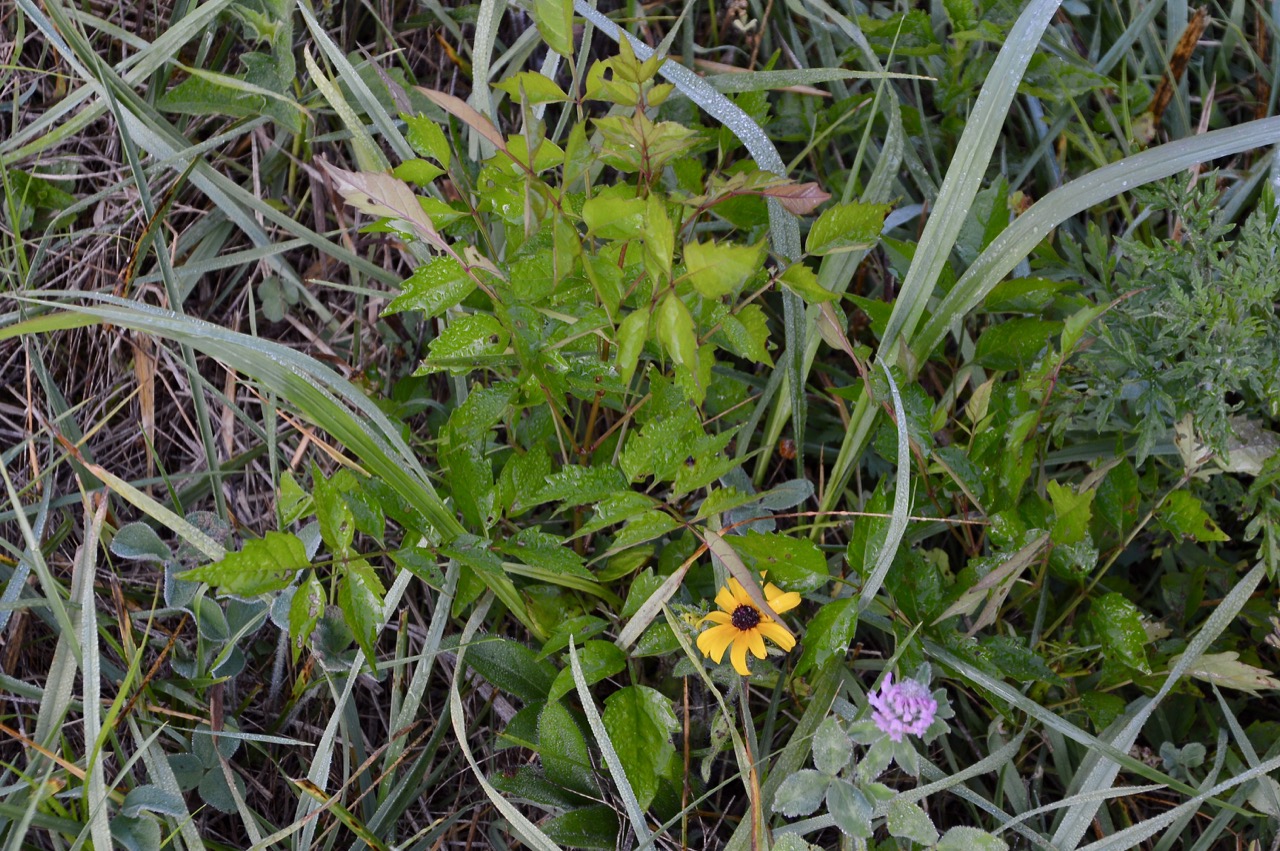 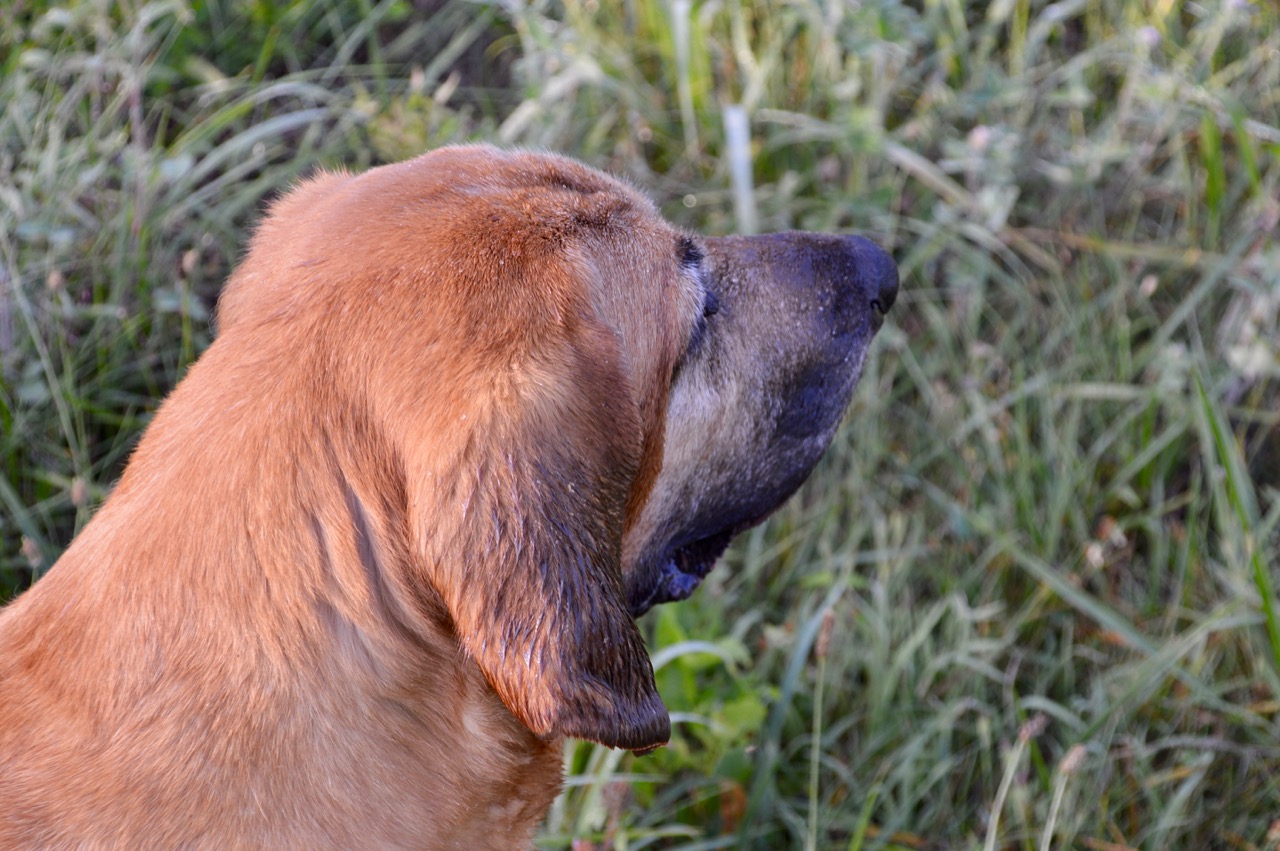 Both hounds stopped to look and listen as we approached the north yard. Looking in the direction of the next door neighbor I wondered if they were smelling a late breakfast or heard something out of my hearing range. 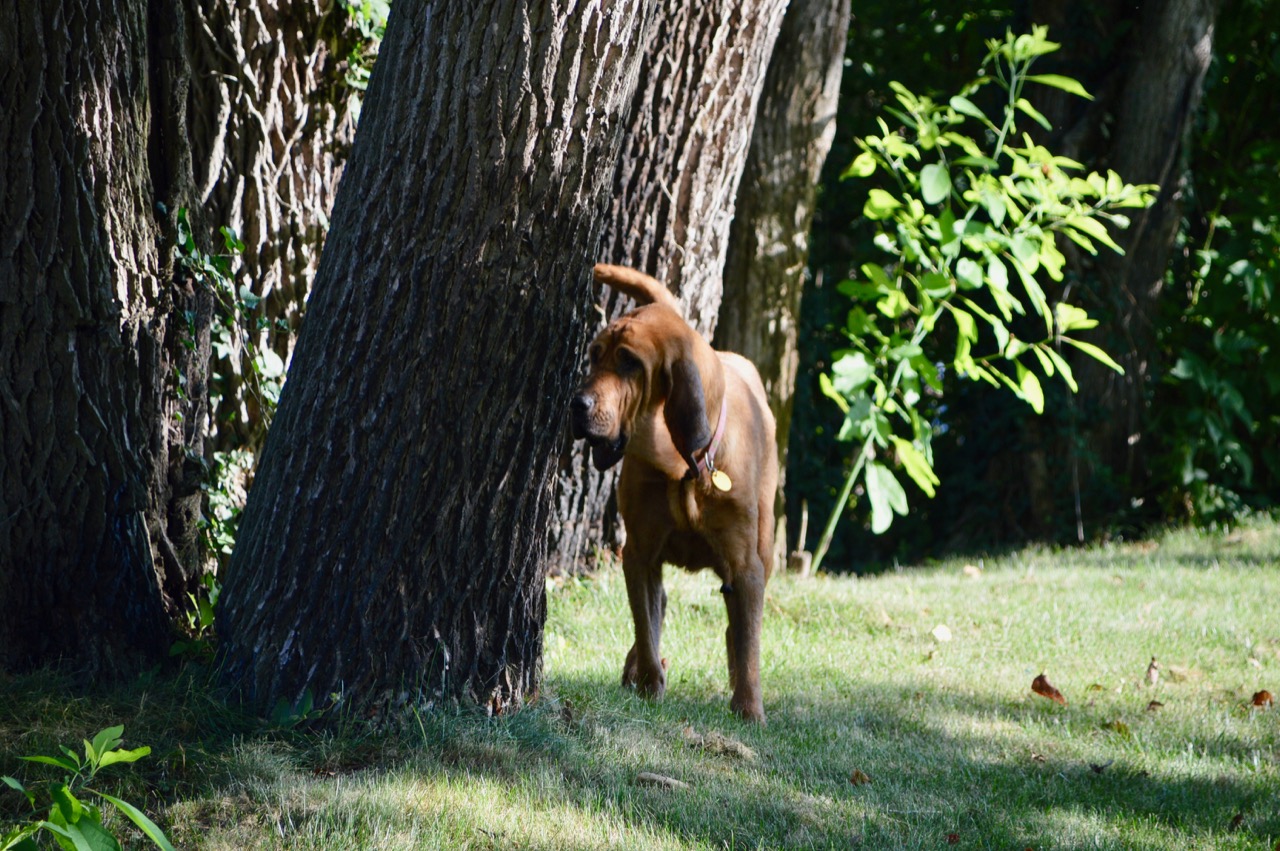 At times Stella is hilarious. She stood next to this tree doing nothing, looking at nothing so evidently she needed a little shade to cool off before she came inside. I didn't call her this morning so when she was finished standing there she came trotting to the house on her own. 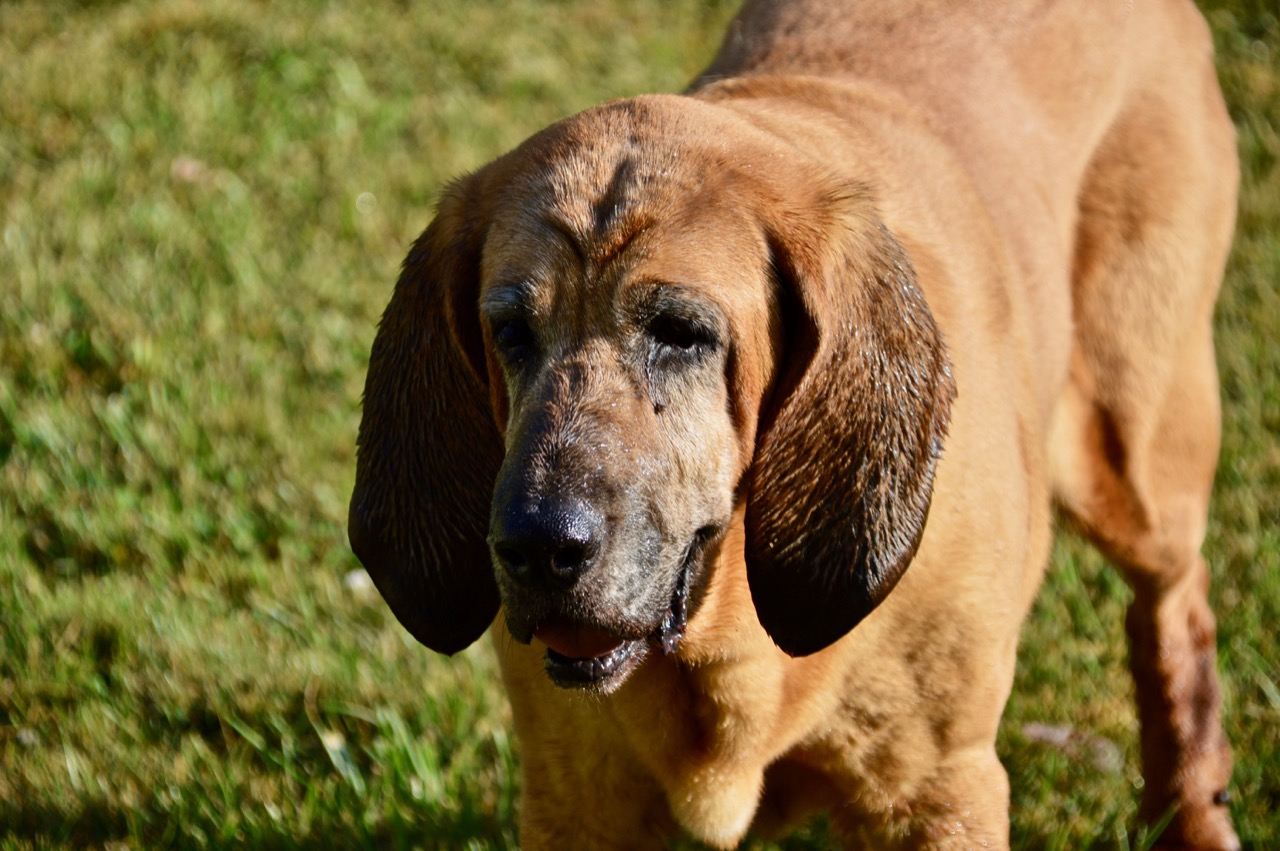 Poor "backyard breeding" gave Sadie shorter ears than most bloodhounds have. Yet as a 8 week old puppy the length of the ears passed the test by wrapping around the front of her nose when pulled out straight. It was 10 years ago next month that Winston and I drove a few miles north of town to see her. Her parents were there so we could see them. Both of them had bloodhound features of a hound that would be in a dog show. I wonder what happened in the breeding process ??

She is a great bloodhound though and actually surprised me how calm down she has become after being a destruction monster her first three years. I would not trade her for any other bloodhound. 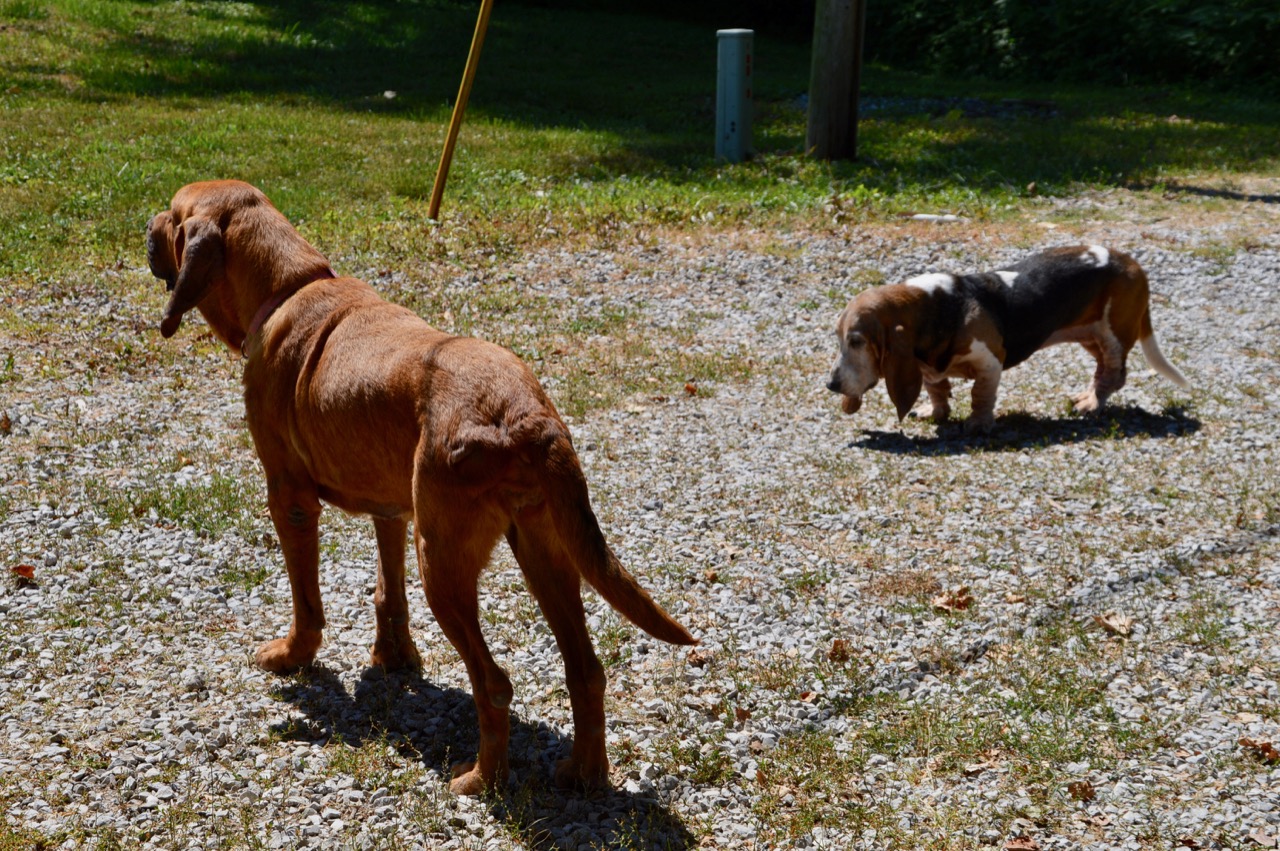 Even though the temps were slowly creeping to 91°, it was still very nice mid-afternoon. I thought after lunch it might be time to sit outside. I would let the bloodhounds roam the field and I thought Heidi would probably take her spot in front of my chair as I looked out at Sadie ... That wasn't the case. You can almost tell that Stella and Heidi had no other plans but to get back inside where they could sleep with air conditioned air. 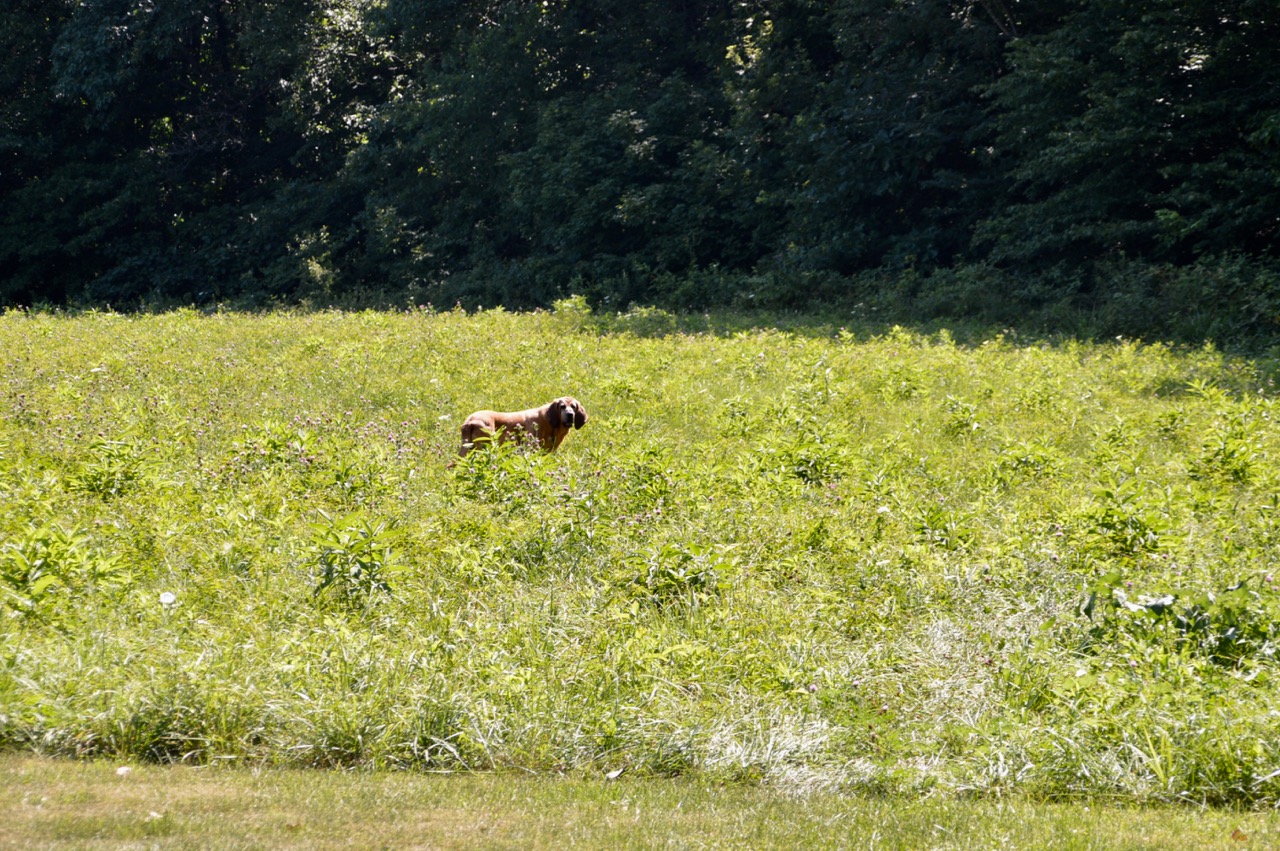 Trained to be a house dog at 12 weeks old, Sadie always knows that after every meal it's time to go outside, find a good spot in the field and relieve herself. Ten years later she still remembers. 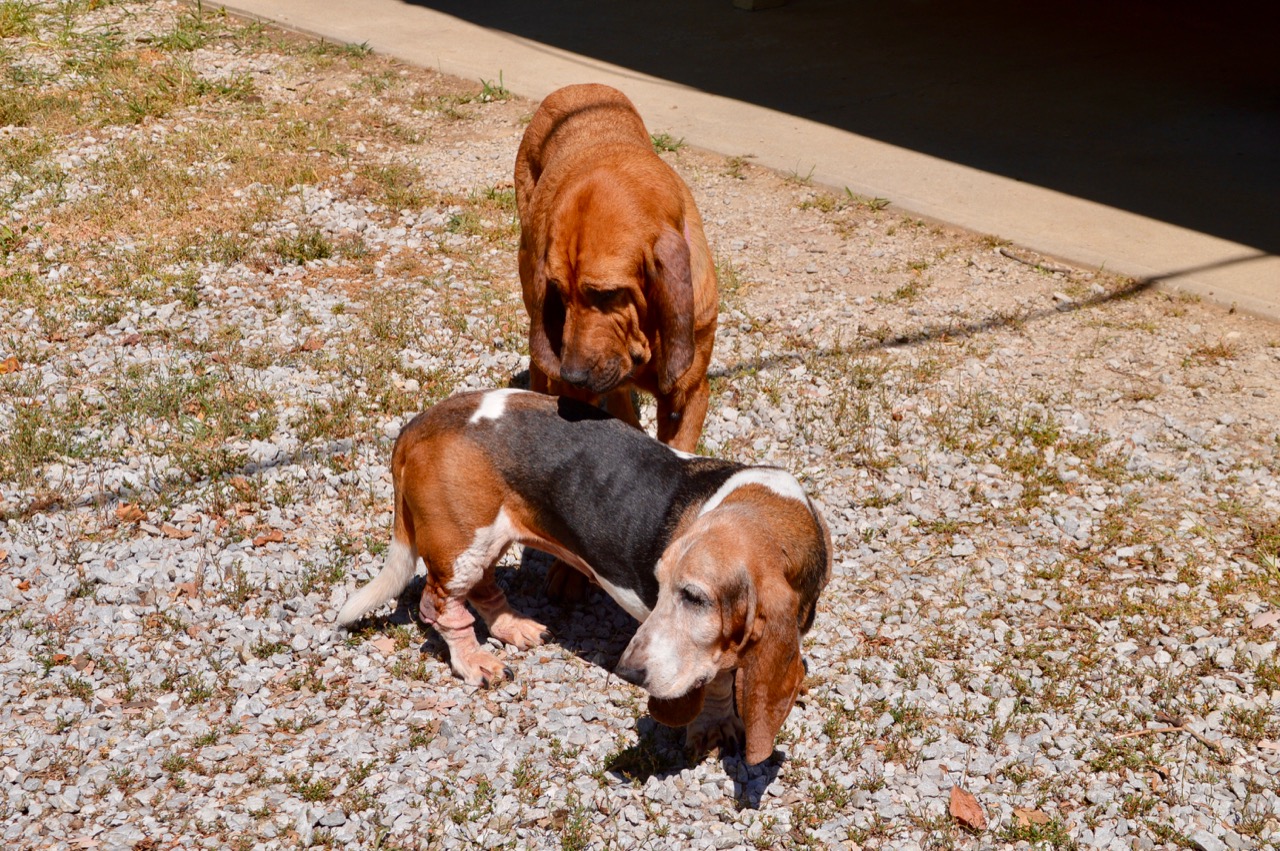 Stella and Heidi decided to put their brains together in deciding what to do. It did not look like they had come to any conclusion as I swung my chair onto "Winston's Patio". It felt hot but it didn't feel that hot ... it was nice with a slight breeze, no bugs ... Heidi and Stella never came to the backyard so I knew that was a sign that they would not be outside too long. 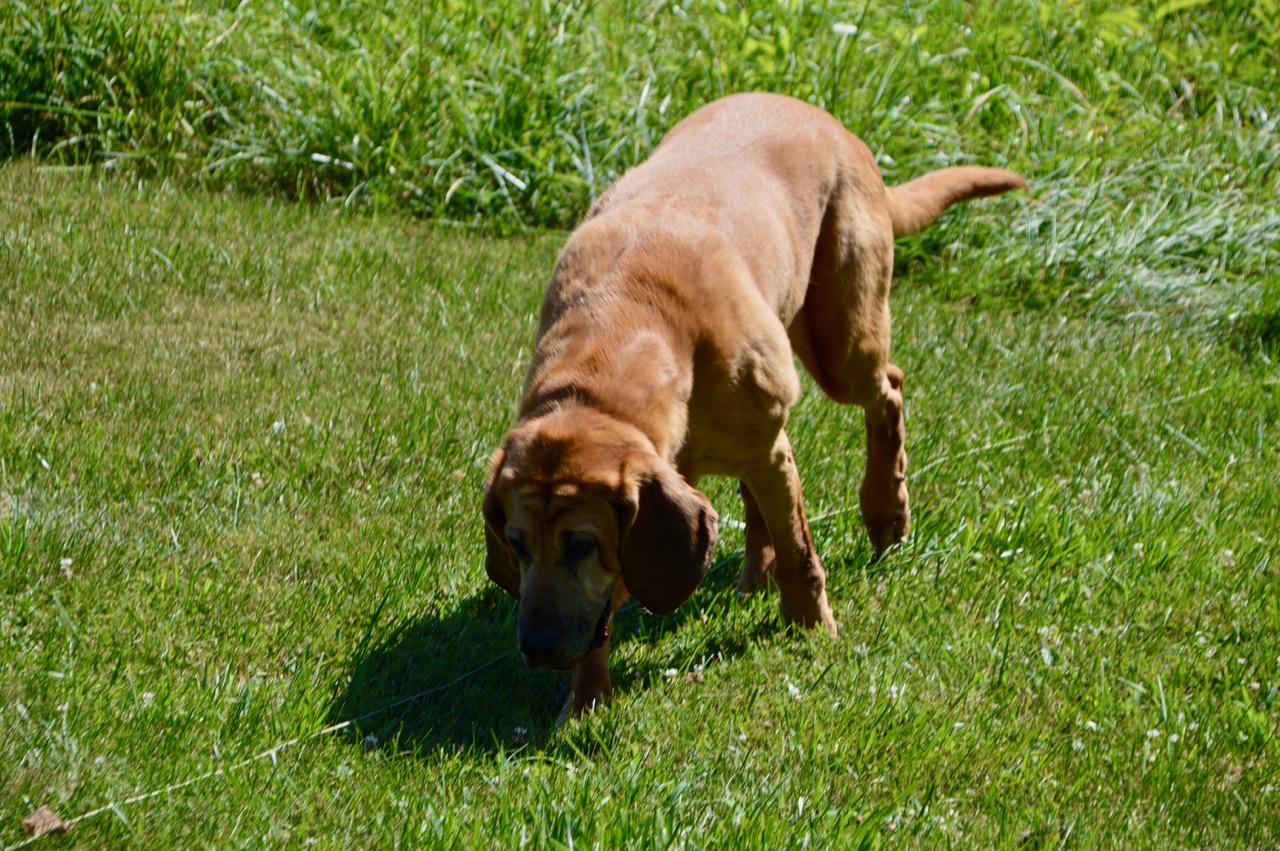 Sadie had those same thoughts as she galloped back to the yard. Her job was done and it was time to go back inside. 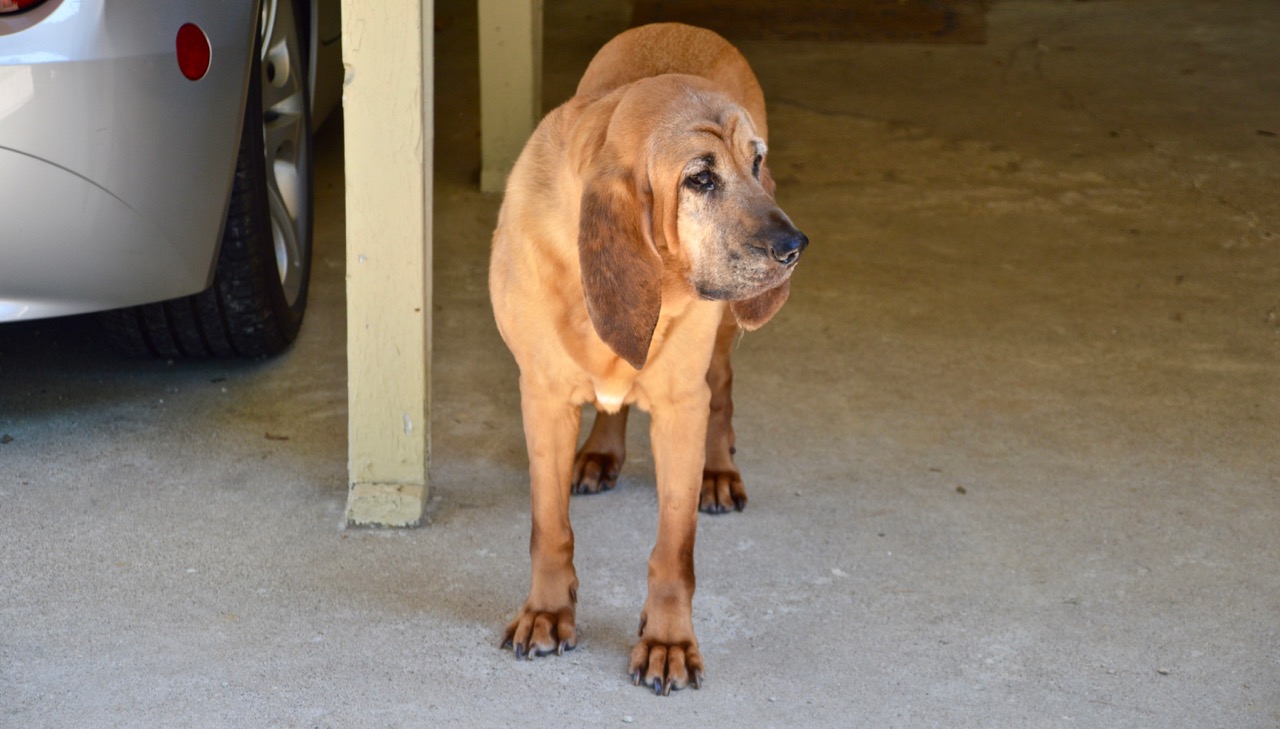 Since Sadie is the 'team leader', she always makes sure the hounds are accounted for and no one is left outside. Only today was different. Heidi was at the door waiting for all of us ... and Sadie found out what it's like to be ignored by Stella. She (Stella) is in her own world most of the time. Stella was taking a quick noon nap and was in such a deep sleep I didn't want to wake her up ... about 30 minutes later she was at the door wanting in, wondering where we had gone.

For those Apple users that are curious about the new macOS that will come out this fall, a new iOS is due at the same time. I am using the beta version of the macOS on my iMac and laptop but not on my iPhone as I plan to wait until the official release this for before I make that change. Last night I decided to go back to the "Light" version which is the background that all of us are use to. It wasn't 10 minutes that I went back into settings and changed it back to 'Dark' ... that is how much I like the new idea of a Dark background. It is a huge difference when you start using it.

The mind and advertising is an amazing thing, even the mind and your smart phone was/is programmed intentionally so you become addicted to it. Ask yourself if you can go 15 minutes without checking for email or a new text ???

Anyway we all understand the history of advertisements. I'll not go into it because it's too much to write about here and I can't write that long today. My story starts a few weeks ago when I was checking out different stereo receivers and amplifiers at Best Buy because my 34 year old Yamaha Control Amp finally broke. My shopping trips are usually pretty disciplined, and nothing more than in, buy and out. I do all my research online before I decide to buy or head to the store.

Of course they have the stereo receivers near the Home Theaters which have to be next to that huge wall of 4K UHD TVs ... not to hard to figure out their plan of attack.

My Samsung HDTV is 8 years old. It's only job is to provide movies every once in a while, ballgames every night and 14 straight hours of college football on Saturdays between August 30 and through the bowl games ending the first part of January. By that time college basketball has taken it's place. So the TV does get a work out but not for news nor prime time tv shows.

A week or so ago as I was walking through Best Buy to pick up the Amplifier I had decided to buy, my peripheral vision couldn't help but notice those fantastic tv pictures that covered the huge wall to the right of me. With more pixels and eight more years of technical development I could tell a big difference between their tv picture and my tv picture. Luckily I got out of the store unscathed and bought only what I intended to buy.

When things are slow, my mind wanders. In freezing winter days it's about moving, before each holiday it's about "deals or holiday discounts on electronics" and when you are 51 days from the first college football game in 2018, the mind turns it's focus to TVs ... a dream of tv's on the wall like a Sports Book in any Las Vegas Casino ... a wall of ballgames.

Today I shocked myself.

After a few days of careful analysis, the Stanley tape measure giving me a better visual with what I would be working with, plus digging into my Samsung Remote Control to make a few minor picture adjustments to keep up with eyes that need a new glasses prescription ... I was ready to do it. I was ready to buy a new 4K UHD TV. I would either sell my HDTV or keep it as a second TV giving me the capability to watch more games at once.

Hounds were fed, let out long enough to relieve themselves and when the hounds heard the words "I gotta go" in my sentence ... Sadie and Stella trotted to the bedroom and by the time I finished brushing my teeth Stella was asleep. Heidi had taken her place back on the couch and was stretched out as far as she possibly could.

But ... I wanted to take another look at my tv picture quality .. I had a tennis match to look at, some NASCAR practice, NFL replay games from last fall and an F1 Race on the DVR from last weekend.

That old (8 yrs) tv has a great picture ... not even bad enough to make a change.

The shocker came when I opened the bedroom door to let the bloodhounds out and then switched back to my cargo shorts/t-shirt and told the hounds I wasn't going anywhere ....

If any of you have made the switch from HD to 4K UHD+ TV ... let me know if you like the difference and if you think it was worth it.