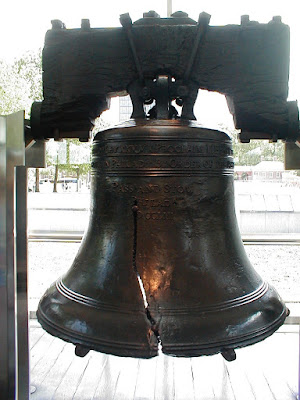 Happy 4th of July everyone.

I took this photo in June 2003 while passing through Philadelphia on a two week vacation, a MLB Baseball Tour. 30 of us spread out on a tour bus letting them do the driving as we stopped at 13 cities in 14 days, saw 13 ballgames and our day off we toured the Baseball Hall of Fame in Cooperstown NY (beautiful area). We started in Chicago and ended the tour in Chicago. Yet standing in front of this Liberty Bell and rubbing your fingers over the words made you forget you were on a baseball tour and instead it felt like you were in a history class. 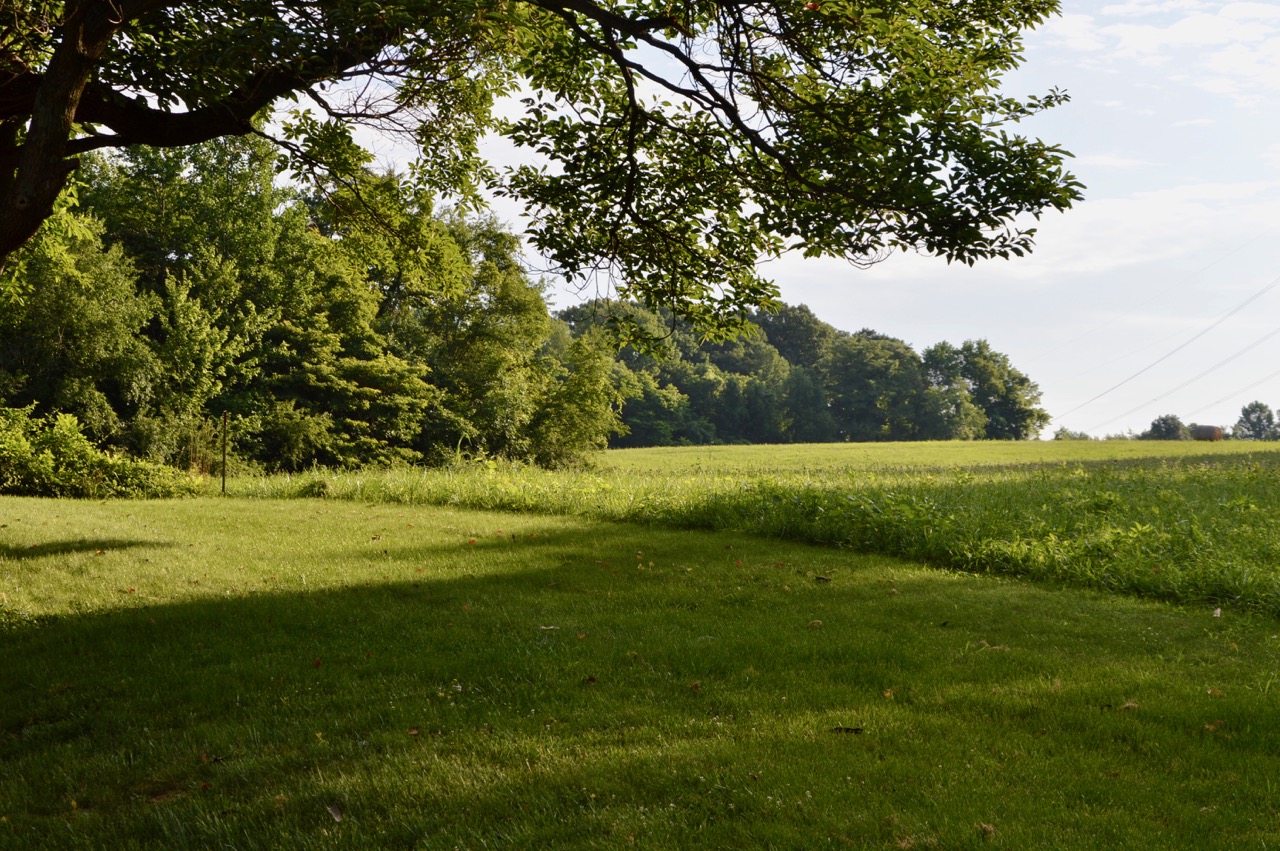 You might notice a change of tint or color in today's photos. A few weeks ago I was back to analyzing why my photos are not as good as they were when I bought the camera in September 2014. I contacted Mark over at Box Canyon Blog to see what camera he was using for his crystal clear photos. His answer led me into researching point and shoot cameras of all sizes. I would compare CNET reviews with the reviews I was finding in my internet search and Amazon customers. 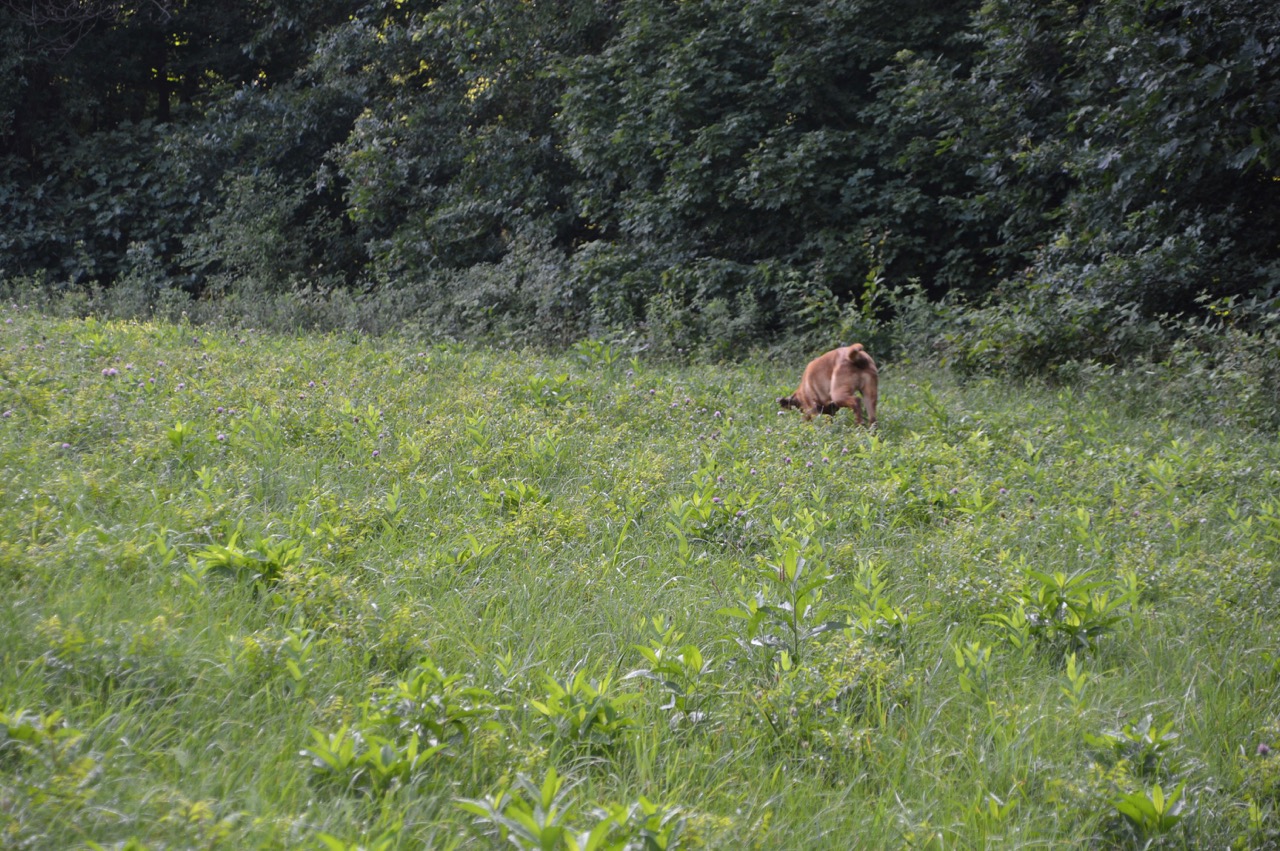 Due to taking a lot of my photos with a zoom lens, I decided not to buy the smaller point and shoot cameras. I thought about buying a different lens, luckily the ones I wanted were sold out at Best Buy.

Why?  I changed the setting the other day from Automatic No Flash to 'Landscape' and found I had more color, depth and if I took pictures in good light they looked perfect. Taking photos at 8am with parts of the field shaded is not a good time for premium quality photos. 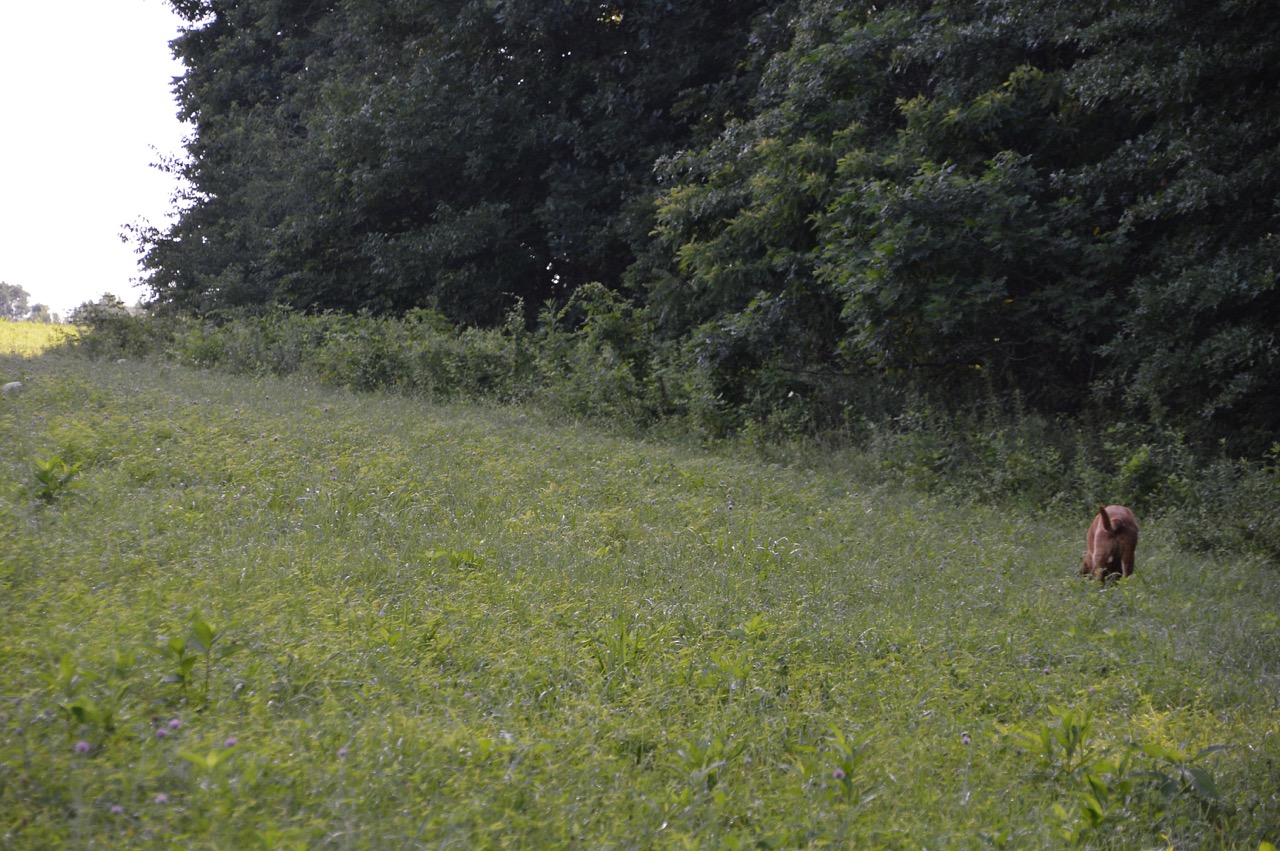 So as a test this morning I moved the setting back to 'Automatic No Flash' and I can tell a huge difference. The other day I posted photos without making any edits. I had to edit everyone of these photos this morning. 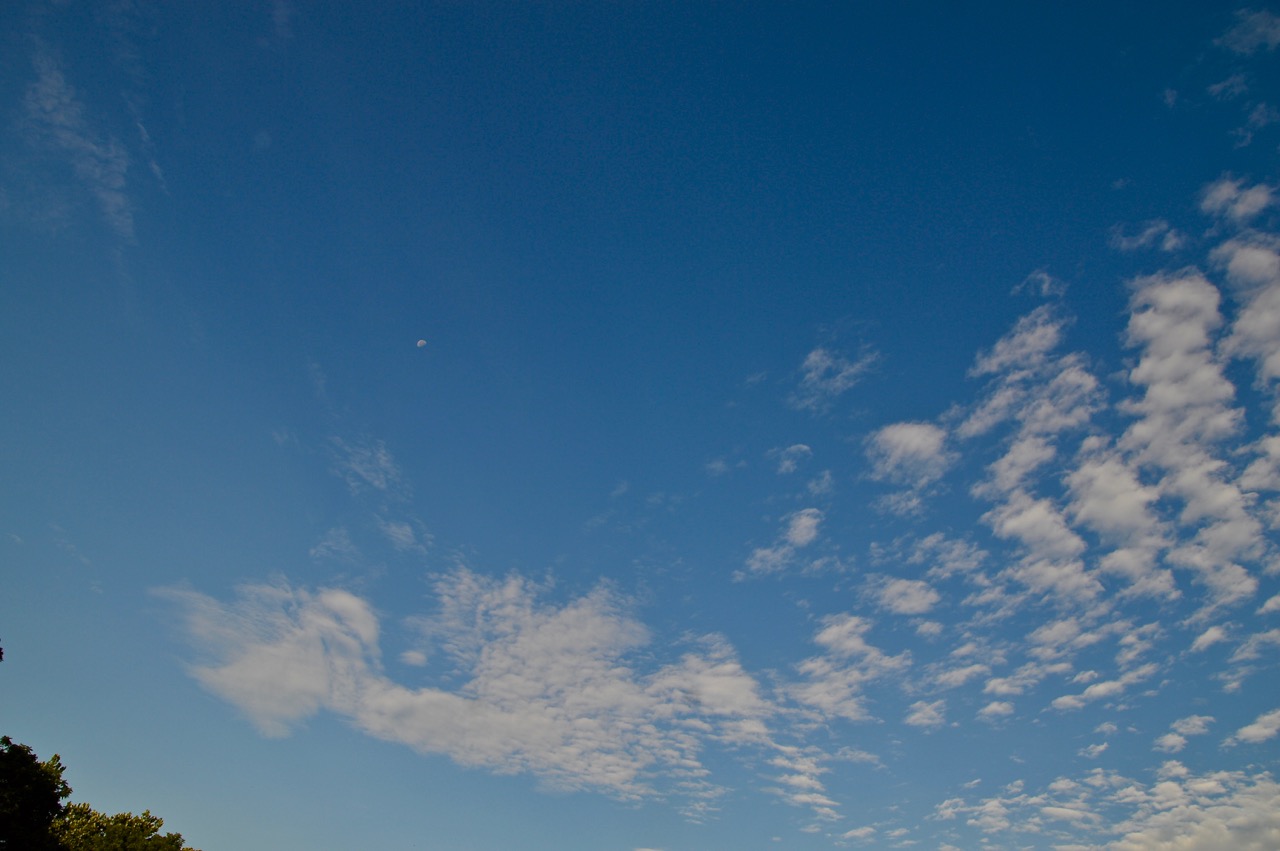 You can barely see the moon is still out. I saw the moon much earlier this morning as I stood outside a little after 4:30am wondering why I couldn't sleep. It may have been the 3-hour siesta I took the previous afternoon or the way the Reds lost a game in extra innings after leading it for 9 of them. Most likely it was because of that long siesta ... not the Reds loss. 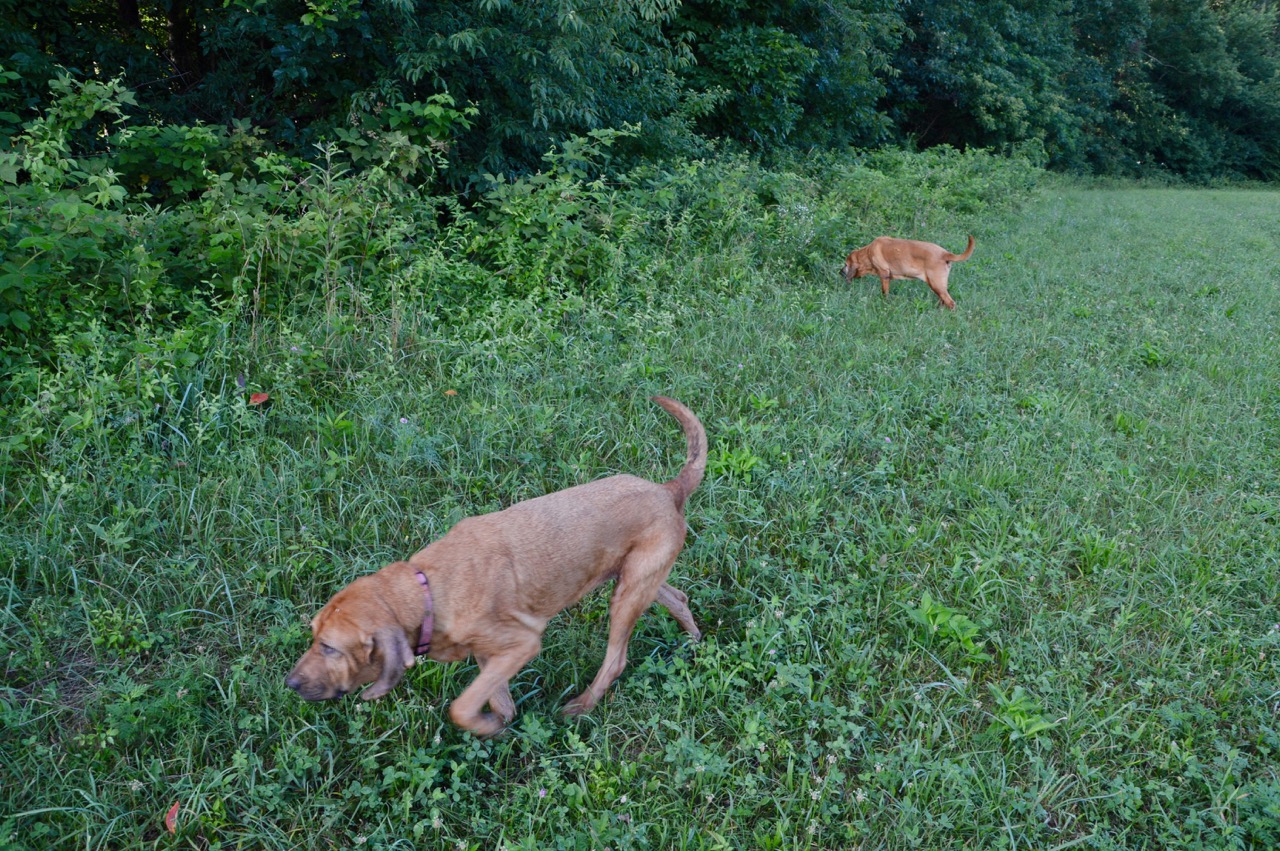 While Stella and Heidi remained asleep, Sadie was up and wanting outside as soon as she heard the chimes from the computer when it boots up after turning it on at 4:30am. I went outside with her but that did not mean she was going to eat at 4:30am ... once she figured that out, she slept by my desk chair until Heidi and Stella woke up four hours later.

What did I do at that time of day? Well for one I took advantage of my free 50Gb of data I get every month from 2am-8am every day. I did updates to the computer, my laptop, my phone and tablet. That took a lot of data all on HughesGen 5's dime. 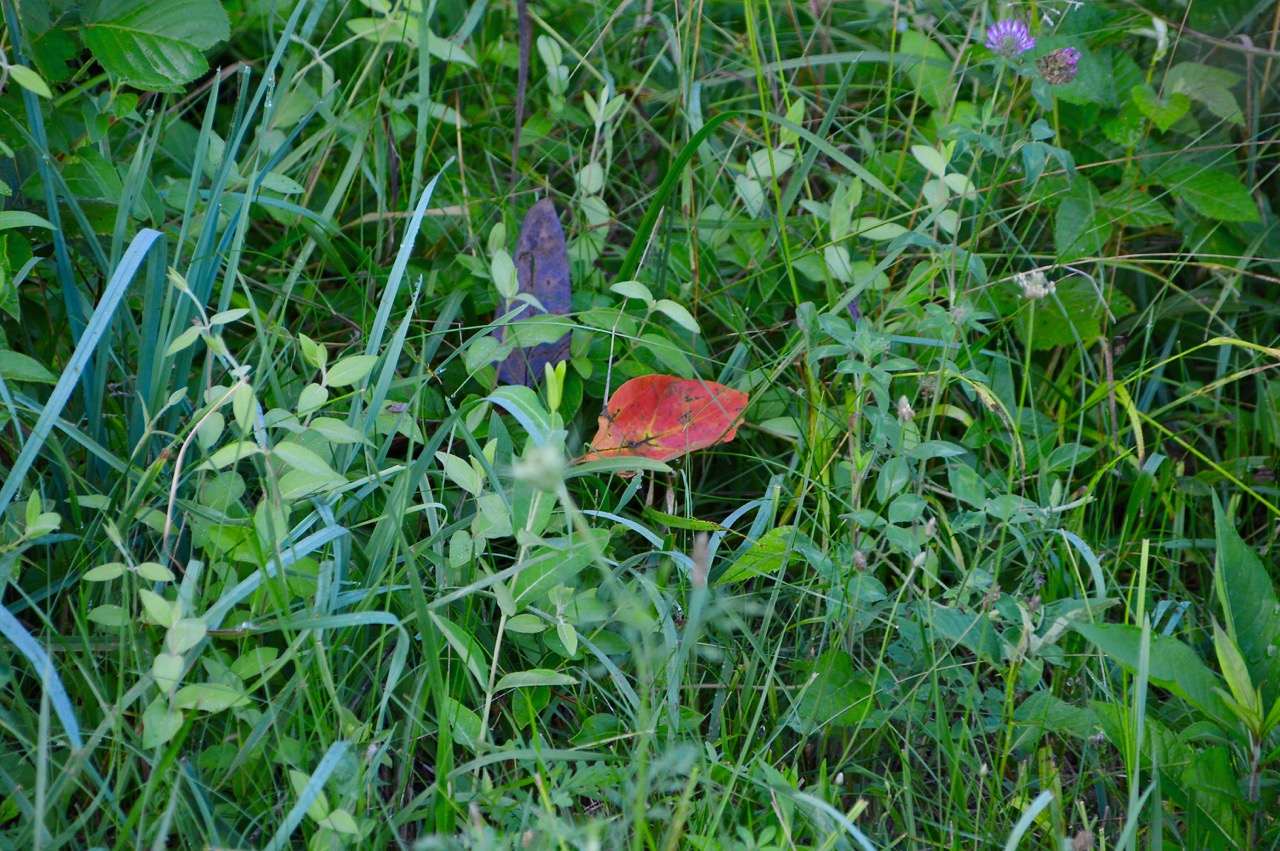 I am also continuing the latest project of moving CDs to iTunes on my computer. Not only are the CDs now available to play while I sit at my desk, they will be available on my phone, tablet or laptop if/when I travel. After they load I can right click on the file and highlight 'Get Album Artwork' and it will load the image of the album cover IF Apple has it in their store. If not, it is simple to type in the name of the band and album in an internet search, download those images to your computer ... then upload it to your album file.

It takes time but I have plenty of time and once it's done I will only have to do it again when I buy CDs. I still buy them because I have not come to terms in my mind of buying electronic music ... there is something about having it on your self knowing you own it and not just the 'rights to it' since you bought it electronically. 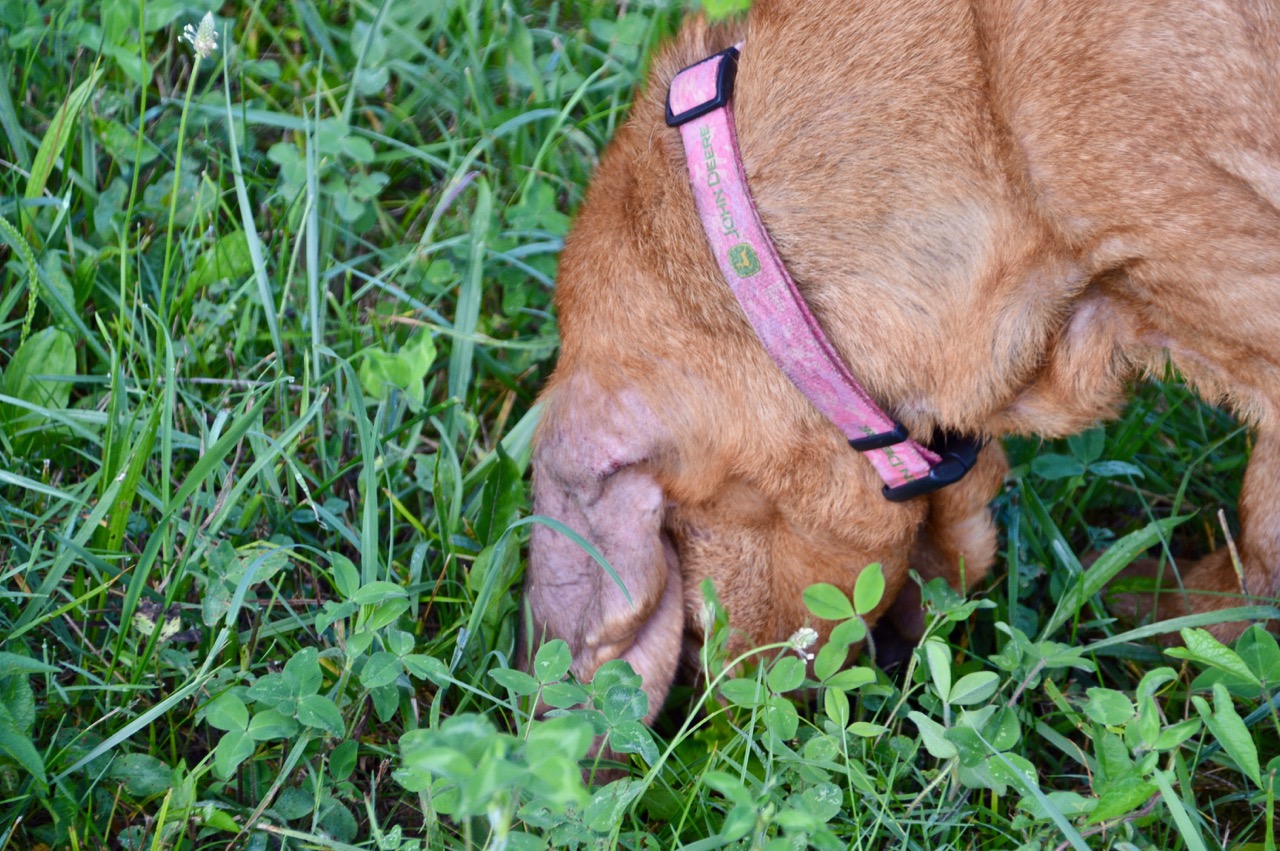 Stella has something new happening this summer. Last year it was losing a lot of weight but this year she has an allergy of some sort, where all the hair on both ears is gone. {correction: the top third of her ear is hairless} She doesn't scratch that area so that is not the cause. She has maintained her weight gain this spring and summer and has no other rashes anywhere else ... except her ears. 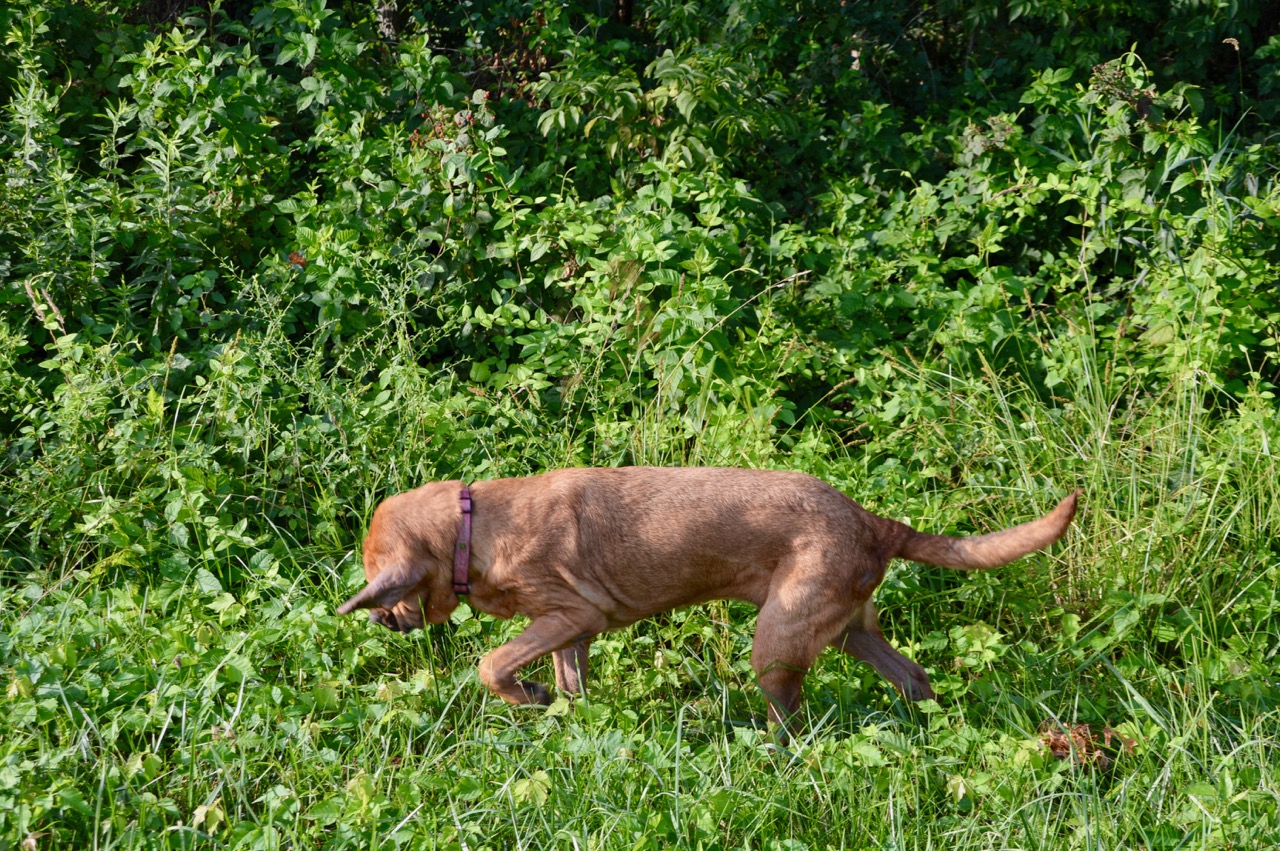 This morning for a change Stella thought she was definitely on the deer track ... she acted as if she was on a mission to find them up until we made the final turn for home. 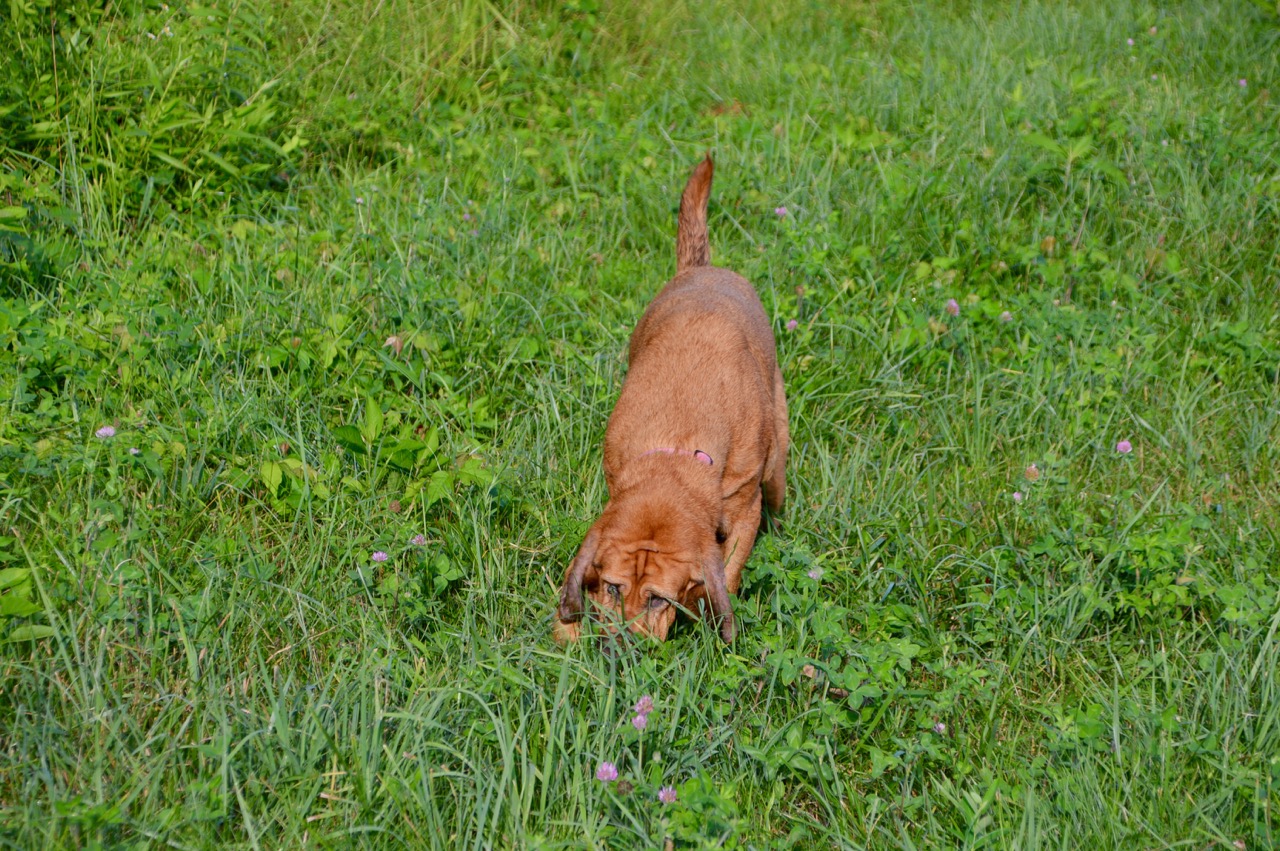 Although the temperature was about 20° cooler this morning than it will be late this afternoon, the humidity was so high you could cut the air with a knife while on the walk. It wasn't too long into the walk where I was ready for the 13-15 minutes to be up and we could be back inside with the AC already on this early in the morning. 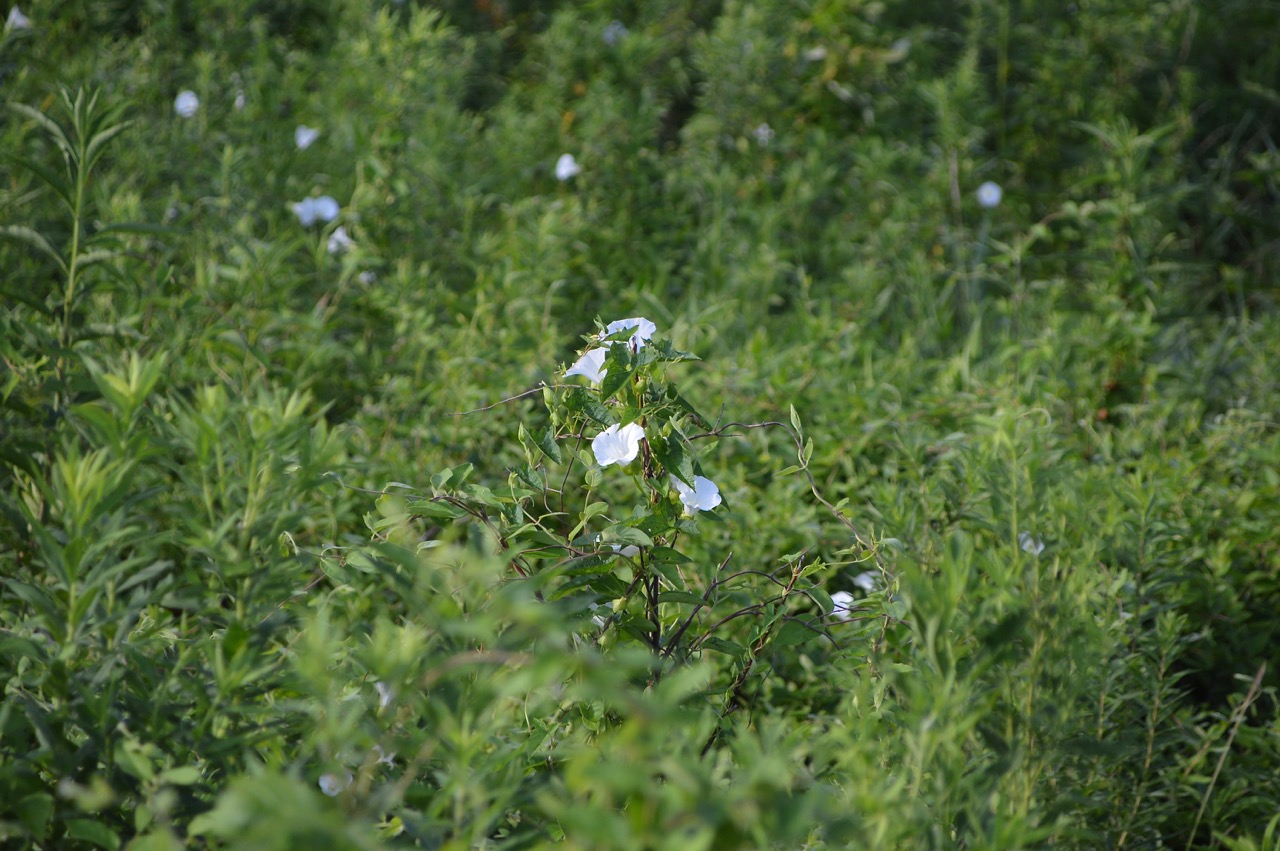 The third and possibly the most important thing is I am finding music I forgot I had. Not only am I finding a few CDs where I have no idea who the band is but I have no idea what kind of music they play. Luckily my OCD kicked in a long time ago and I alphabetized them as are my DVDs ... otherwise I was buying duplicates.  LOL 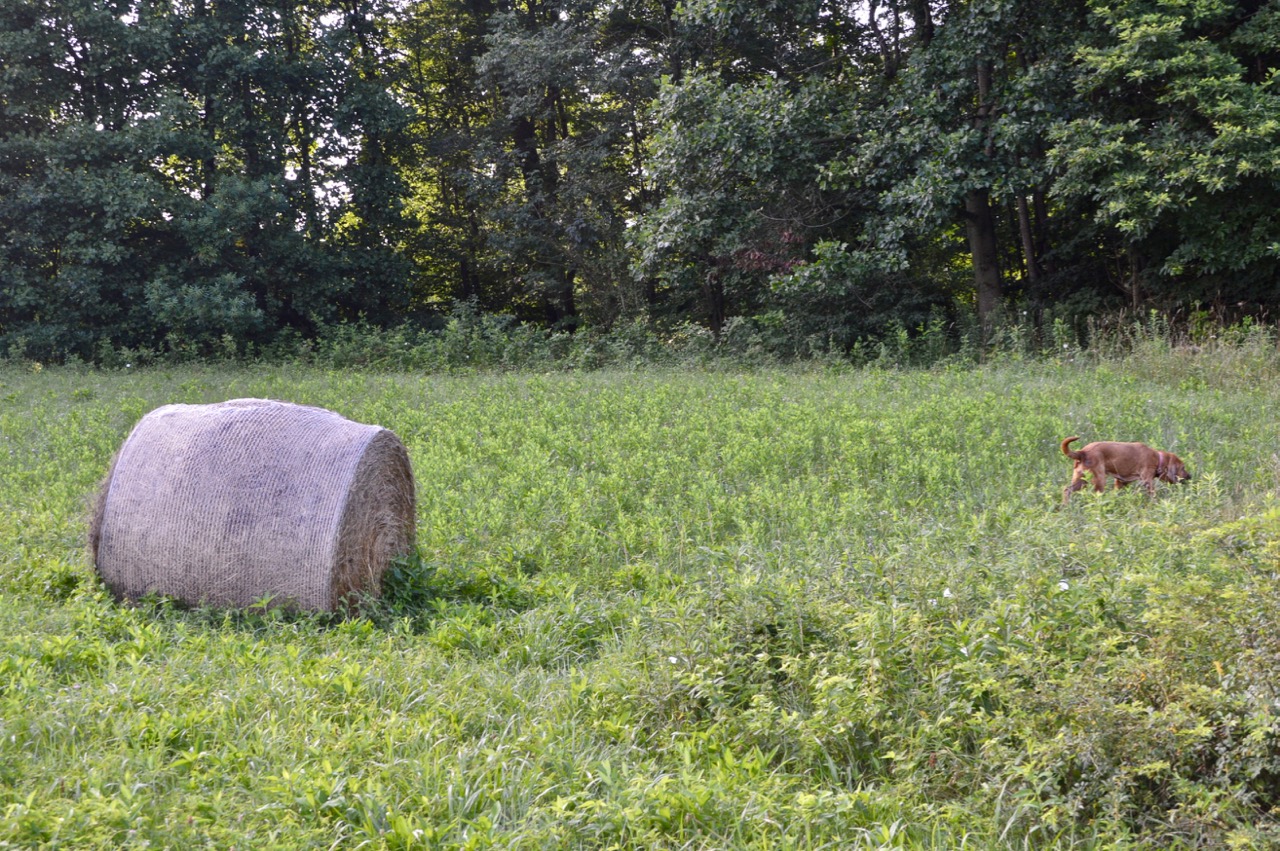 It's been a while since both hounds headed for the 'far right corner'. Stella was sure the deer were headed that way. She doesn't run anymore but by the time I turned from taking the photos of the white flower, she was headed toward the gully. 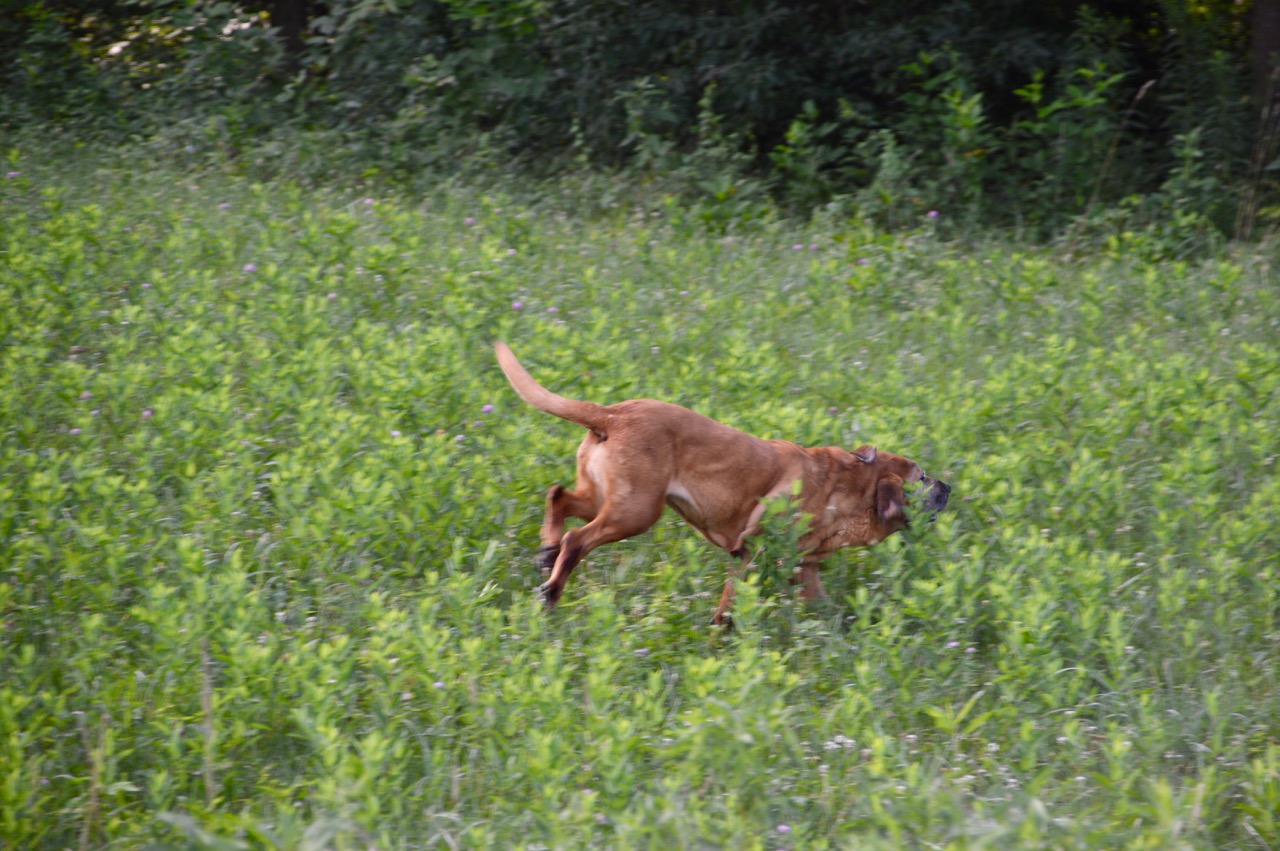 Sadie was caught by surprise and took off after Stella with me running and yelling after them to keep them from running down into the gully. By the time I got to them, they were already turning around and heading my way. 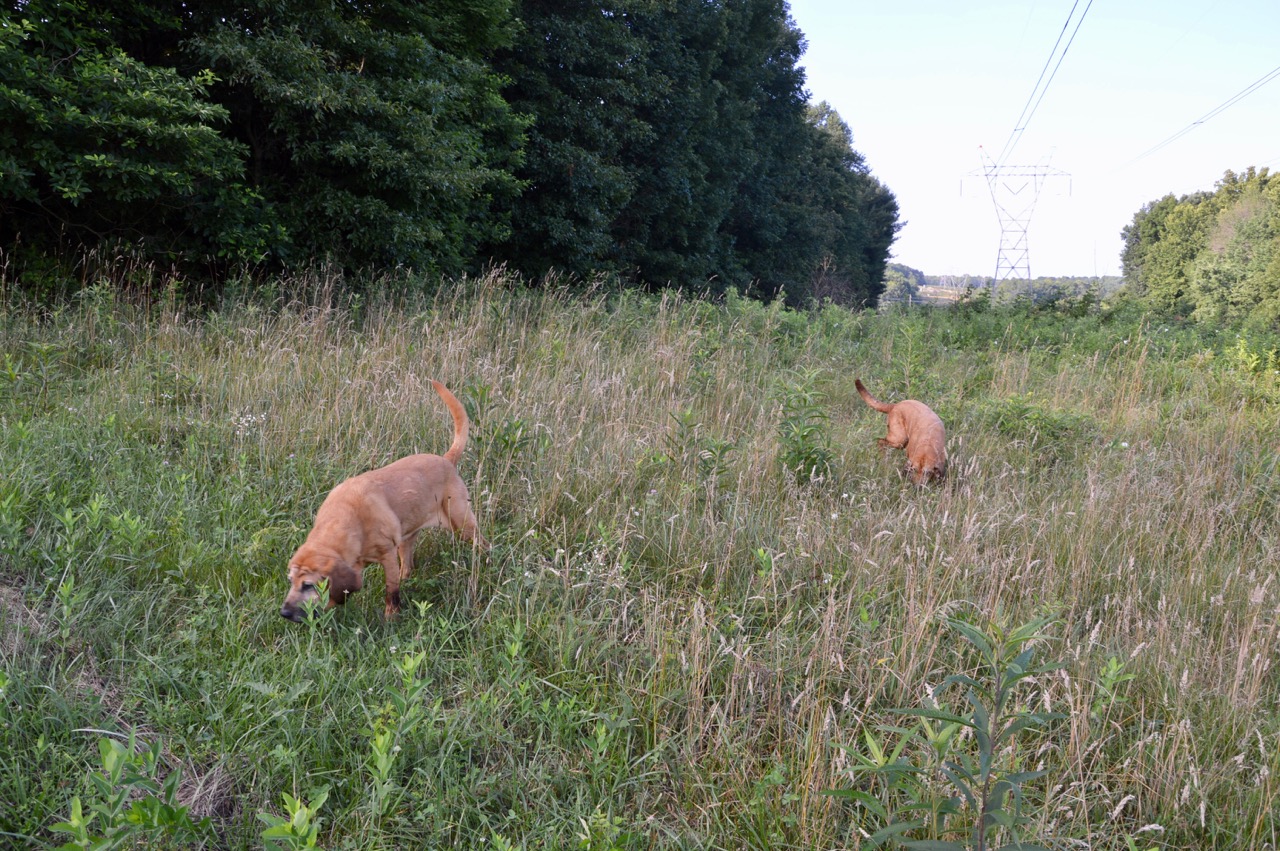 Unlike last summer, the field has not turned into an ATV Park. I've seen the neighbor riding his ATV only one time since they cut the field and I have seen no tracks that lead down into the gully where he spent a lot of time last summer. There is still plenty of time left for them to show up. Maybe he and the field owner's grandkids are at camps or on vacation this time of year. 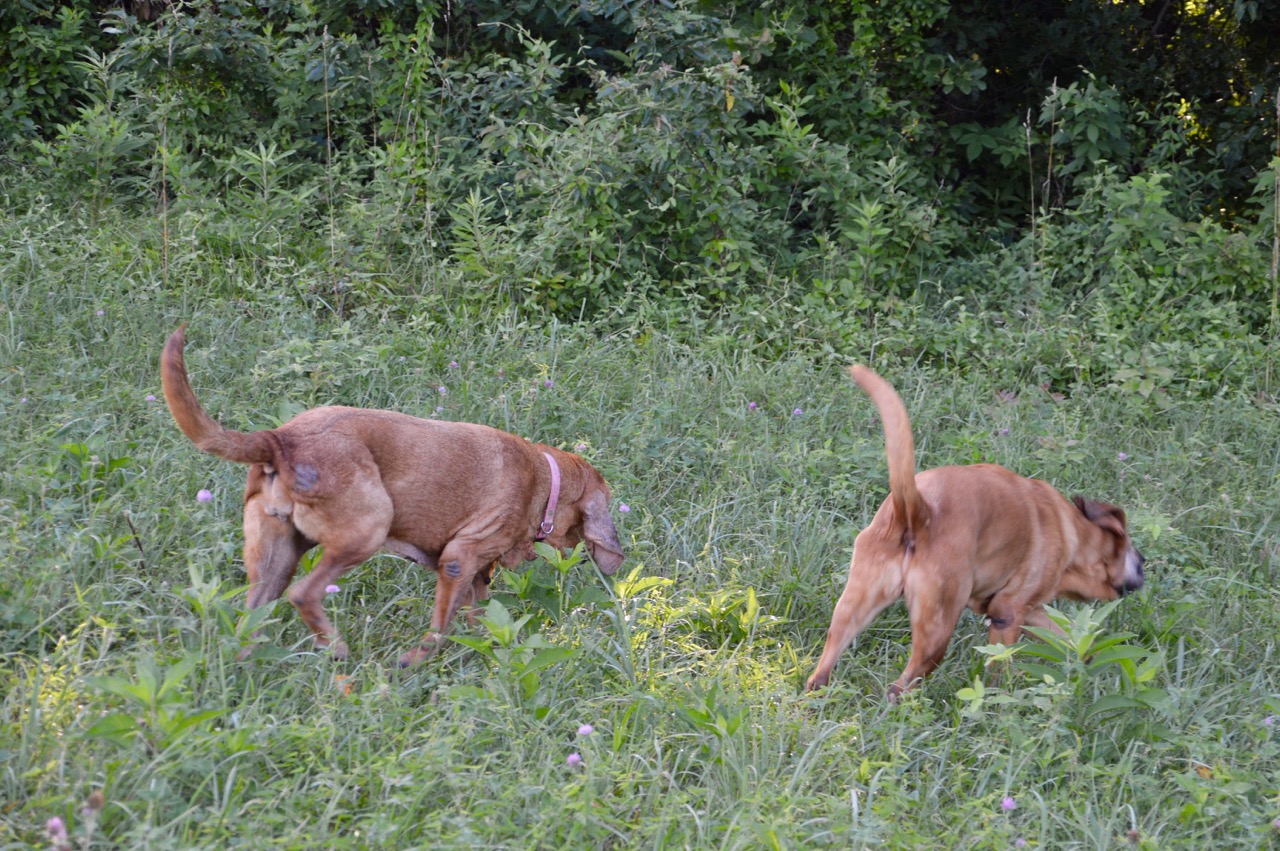 For anyone that might want to try the Beta version of Apple's new OS ... DON'T ... I knew the issues before I decide to load it because it is the Beta version and they pass it out to developers and volunteer users for their feedback to fix the bugs etc. I just forgot how it can operate ... things may hang up, some programs may not respond, can't be shut down and you might get to the point where you have to save what you are doing and then reboot your computer.

I just did that. There are ways to go back to the older version OS that does work but you need a backup (which I have) and you would wipe your hard drive clean, then restore from that backup. The problem is, in the past week of using this new OS I have made changes to spreadsheets, and added hundreds of photos to the library.

I cannot remember how that all works if I restore from an older backup before I started the new Beta OS. I just thought of an idea that might work. I'll drag my photo library file and all of my spreadsheets to the "cloud" and then wipe the computer hard drive to nothing and restore from my older back up, then drag the spreadsheets and photo library from 'the cloud' back to the computer. 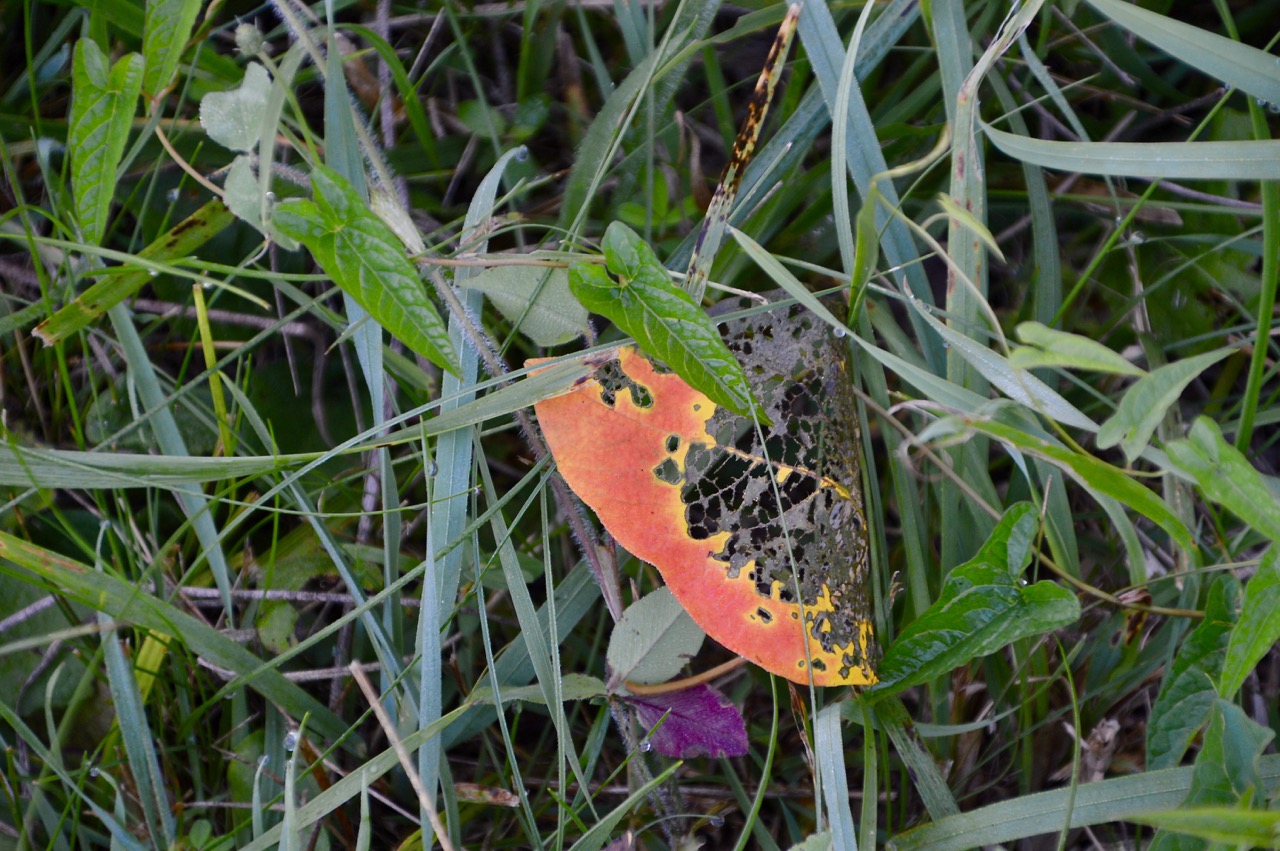 Did I confuse you? 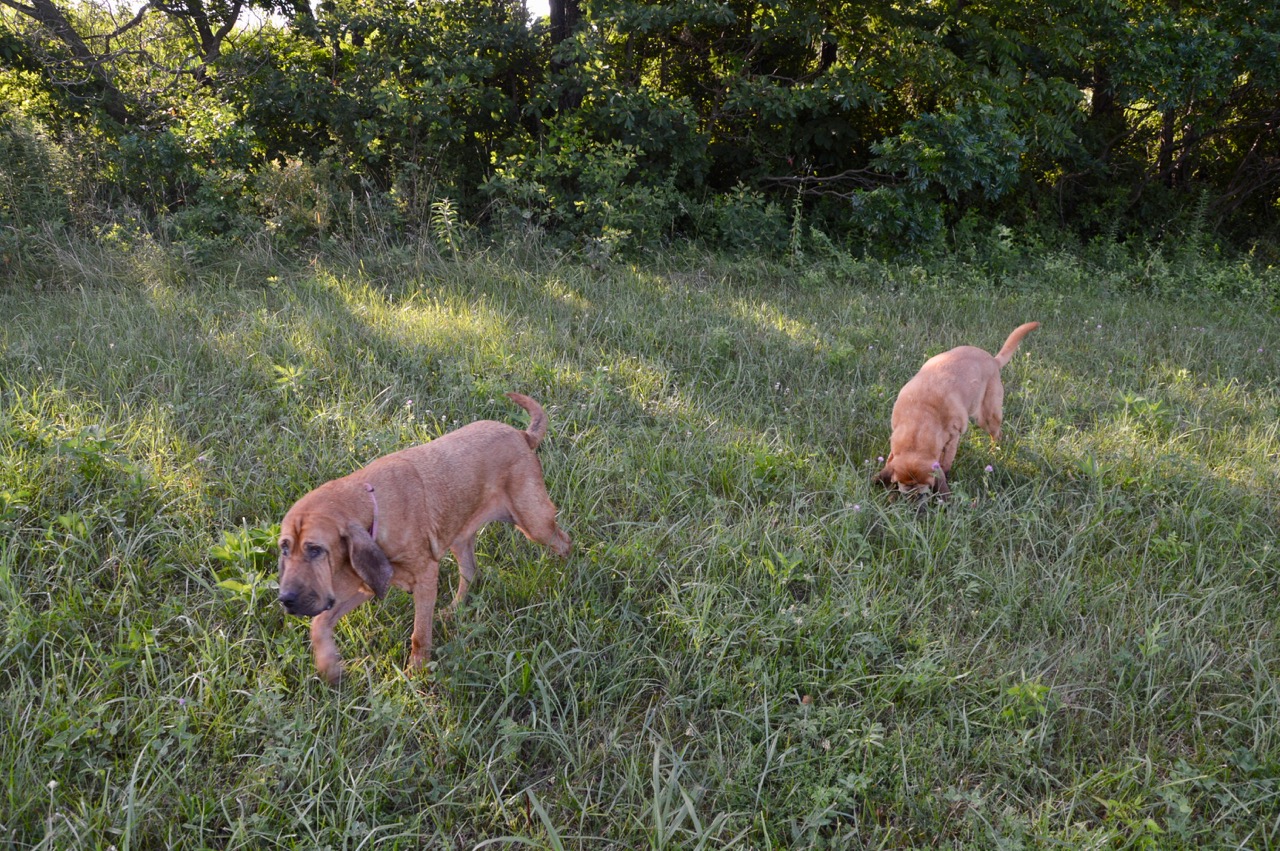 That will give me something to do today ... I like that kind of computer work. 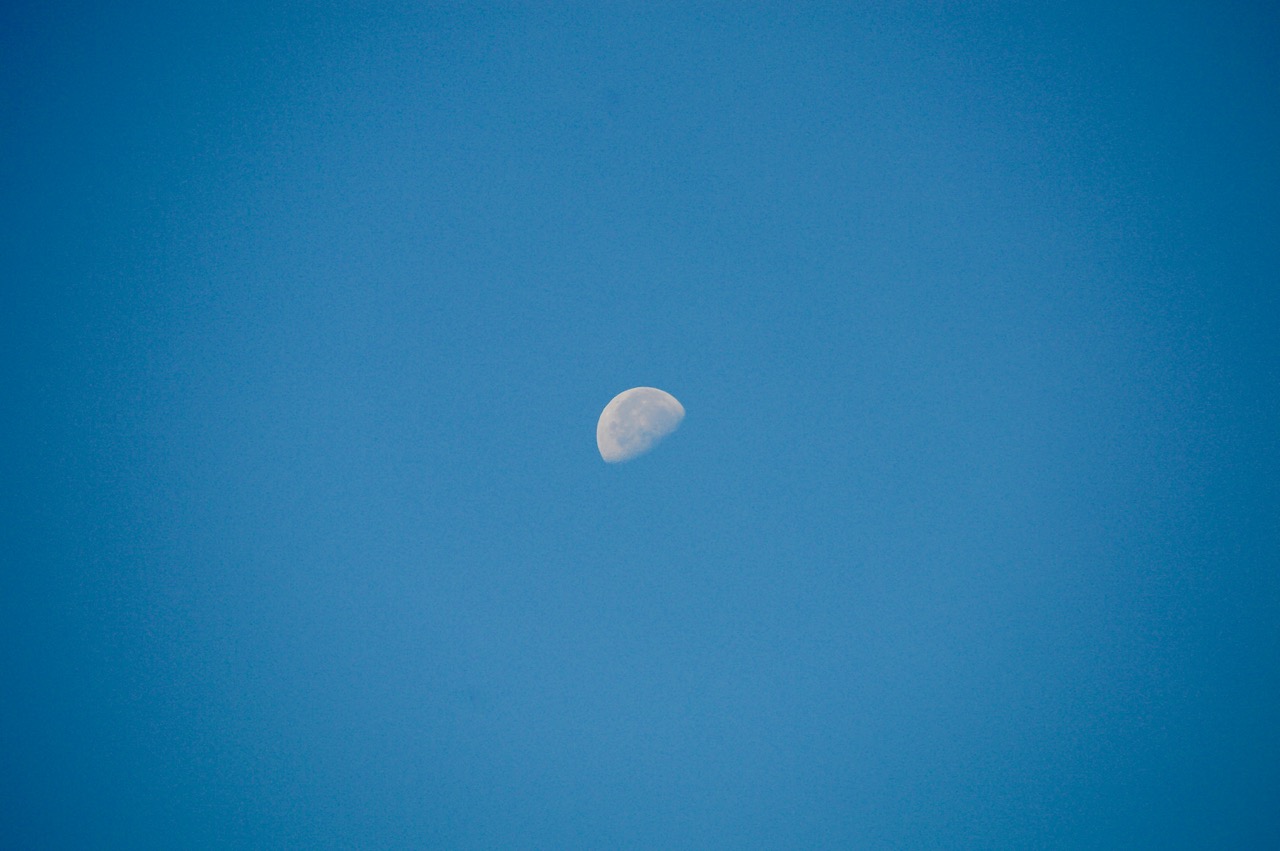 I thought about cropping this photo but decided to leave it as is ... 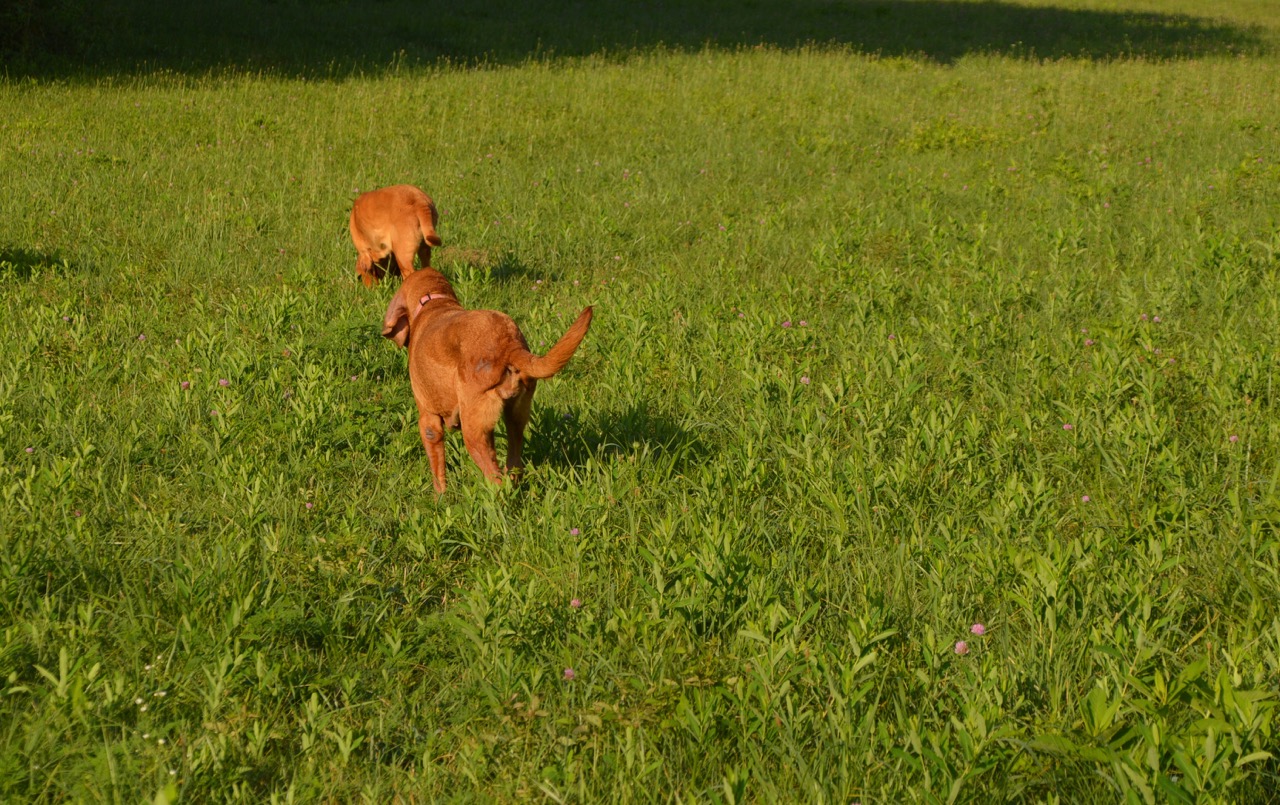 Once we turned for home, I was hot, the hounds were hot ... they both moved on the path ahead of me setting the pace to return home. 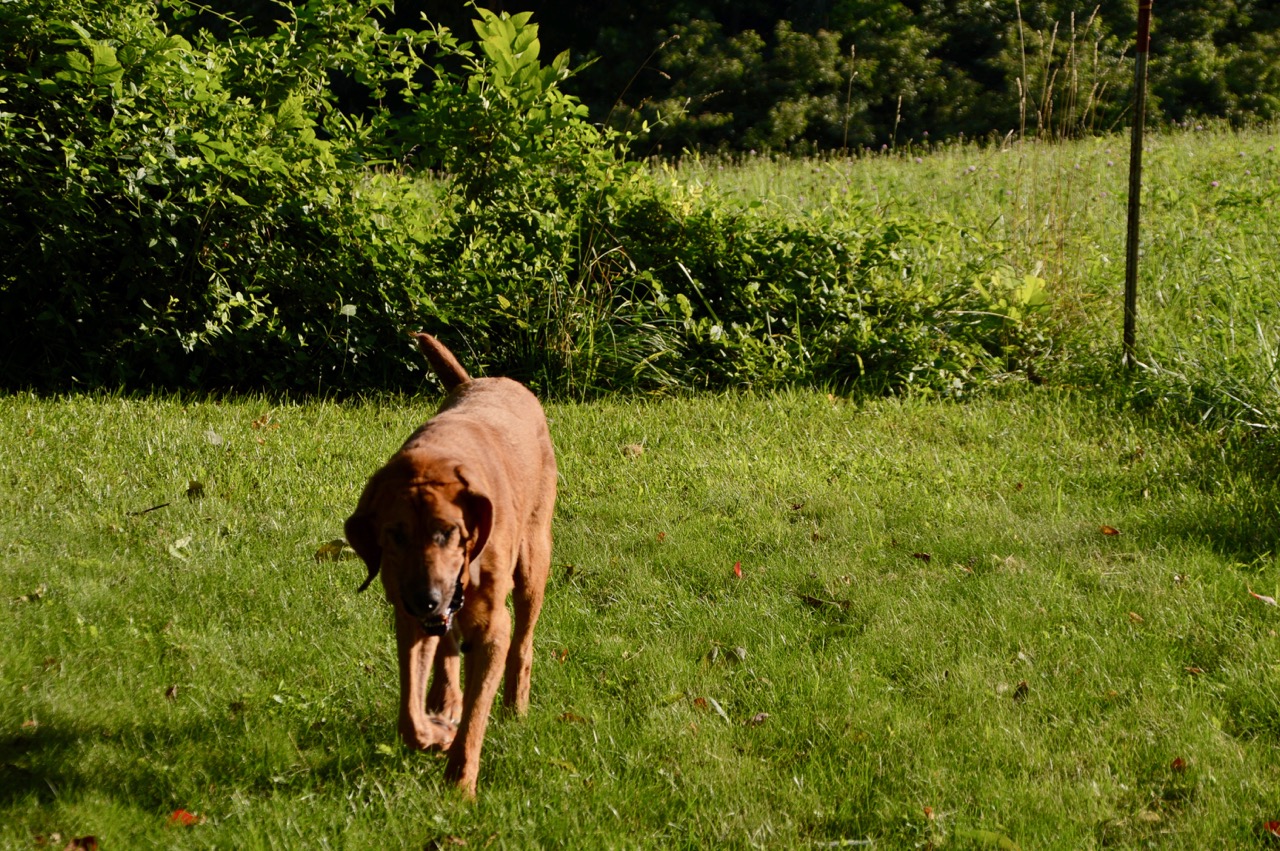 By this time Stella reached the yard she had had enough ... once her mouth opens and her tongue falls out ... that mean she is hotter than normal. The AC was on her mind instead of her stopping under a tree and scratching ... to end every morning walk.

Out of five shelves that are 28" long full of CDs, I have half of the last shelf to do, importing the CDs to iTunes.

I just thought of a reason that I cannot go back to an older version of the OS ... it's going to take 5-7Gb of data to load the current macOS High Sierra after I wipe my computer clean. With six days to go on my billing period I would run out of data before the upload would finish. I am not in the mood to spend $15 for 5Gb of additional data ... so I'll stick with the beta version of macOS Mojave. This new beta version overall works okay.

No big plans today ... baseball games will be on the tv as background noise unless something happens. The hounds will sleep most of their day away until our second walk after 8pm. Since the trees have grown between my house and the town park a few miles away, we can barely see the fireworks anymore. Luckily all three hounds are not afraid of local fireworks that will be going off ... a few neighbors behind me and out of view, sound like they are shooting artillery instead of fireworks.

I would have waited to post later but with the heat and the daily routine, there will not be that many chances for anything to change or to add more photos that is blog worthy.