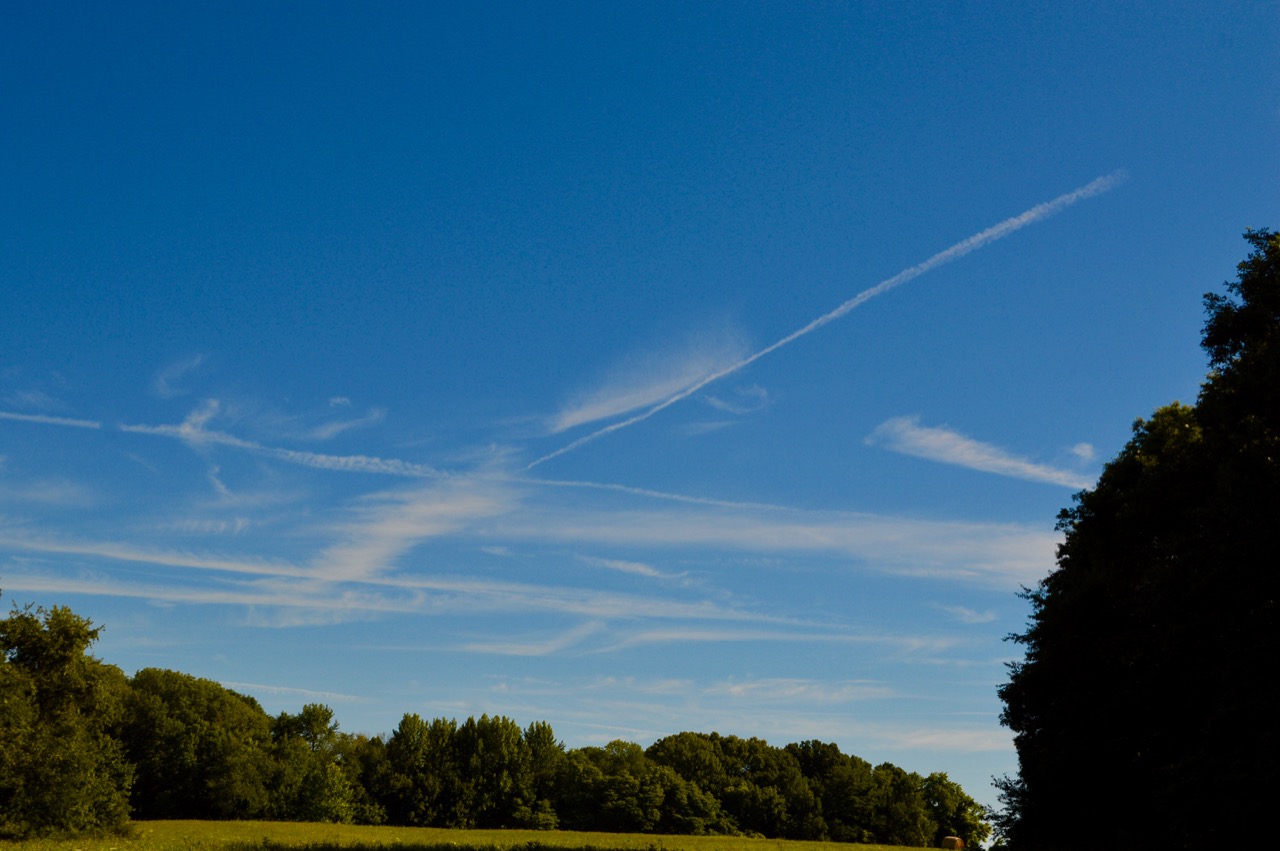 I keep having to pinch myself every morning as I pour my first cup of coffee to make sure that I am seeing another day of great weather. Where did it come from and how did it turn into a daily repeat. Mid to high 80's, low 60's at night, cool breeze in the morning and sunshine. So I was curious very late last night to check AccuWeather and see what the months of August and September might bring. 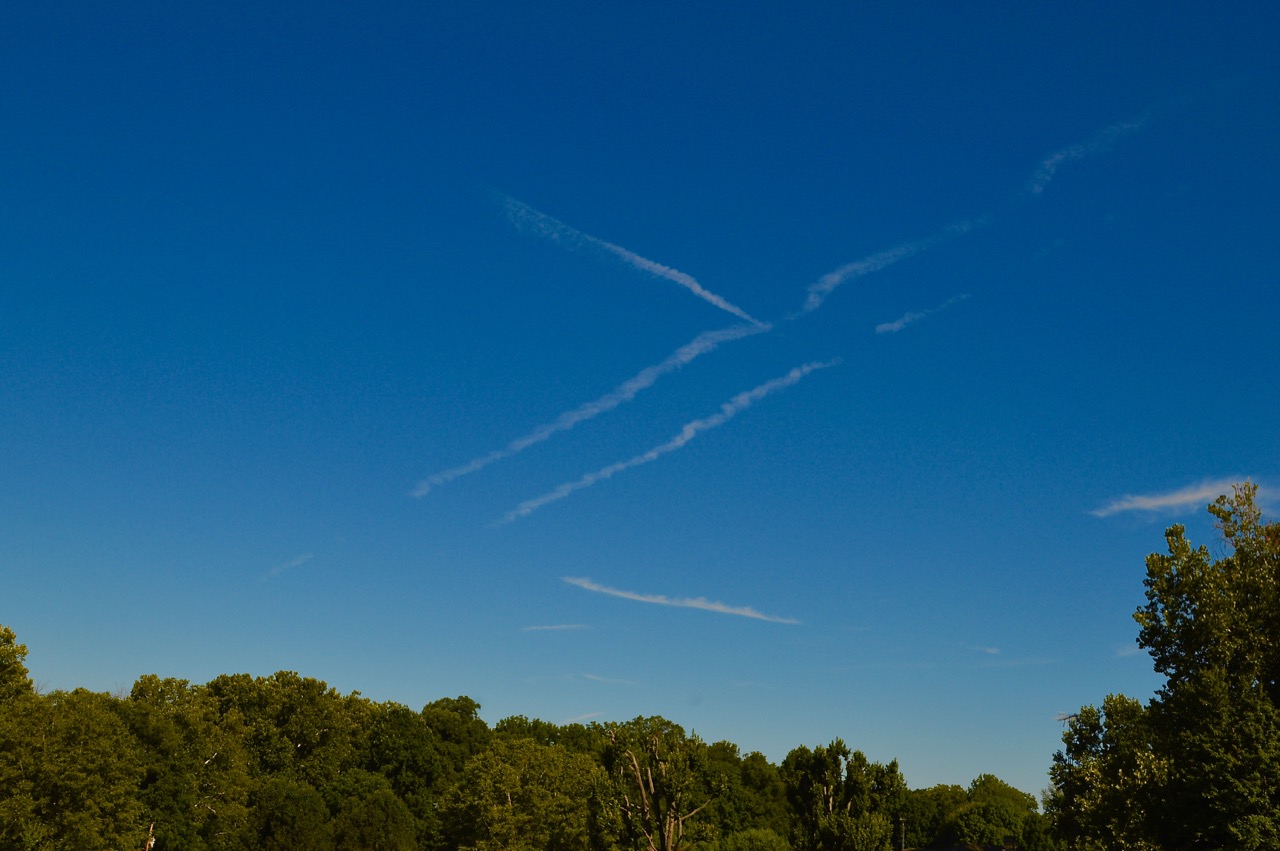 It was all the same, with a few days of rain which will be a welcomed sight. By late September we will drop to the low 80s to mid 70's thru October. So I didn't feel guilty at all today as another day passed with me doing nothing on the 'to do' list. A list that was postponed after reading a DYI article that put most of my tasks on the list of "Never do these in humid weather" ... 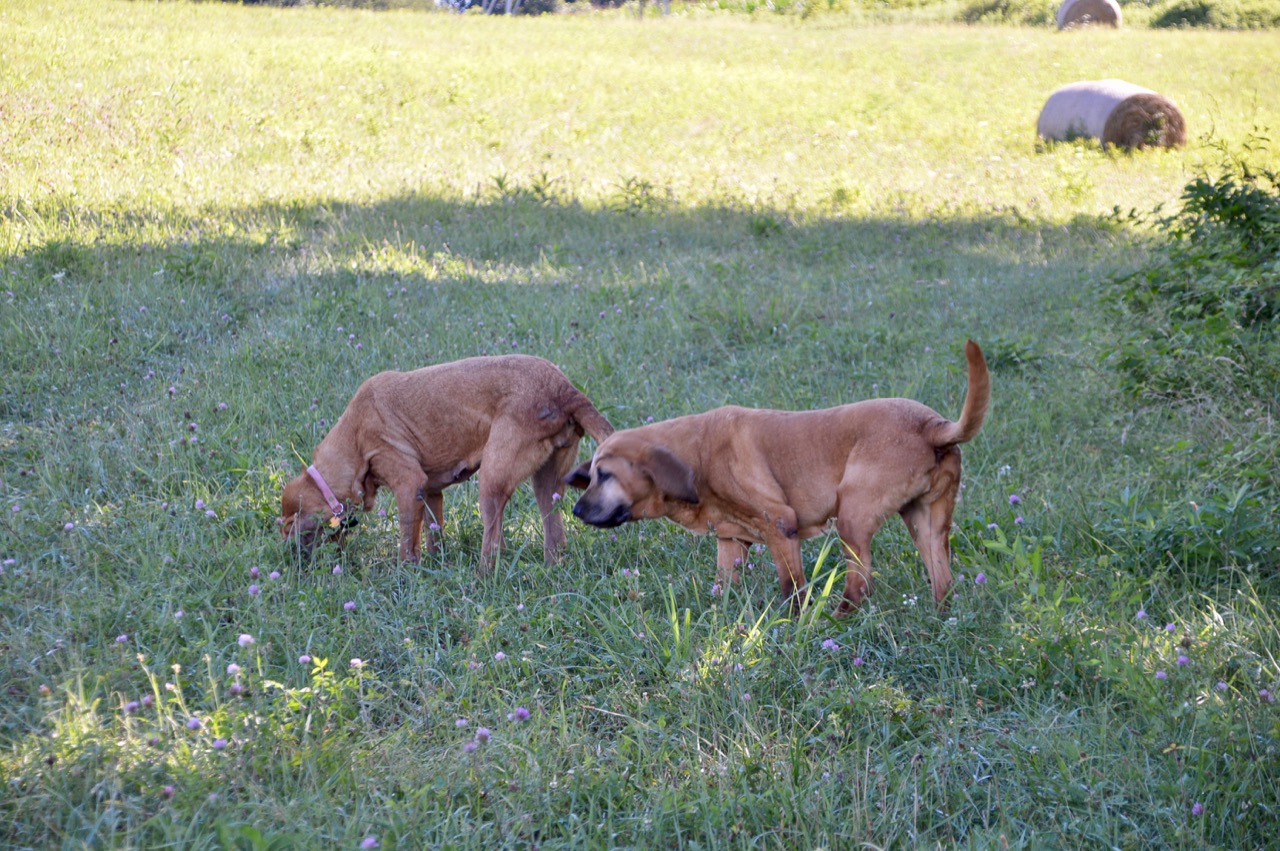 By the time I had finished taking all the photos of the field, the sky and the edge of the woods that are trying to grow wild blackberries ... both hounds were already by the first turn. Obviously they were more interested in eating today than tracking making it one of our harder walks. 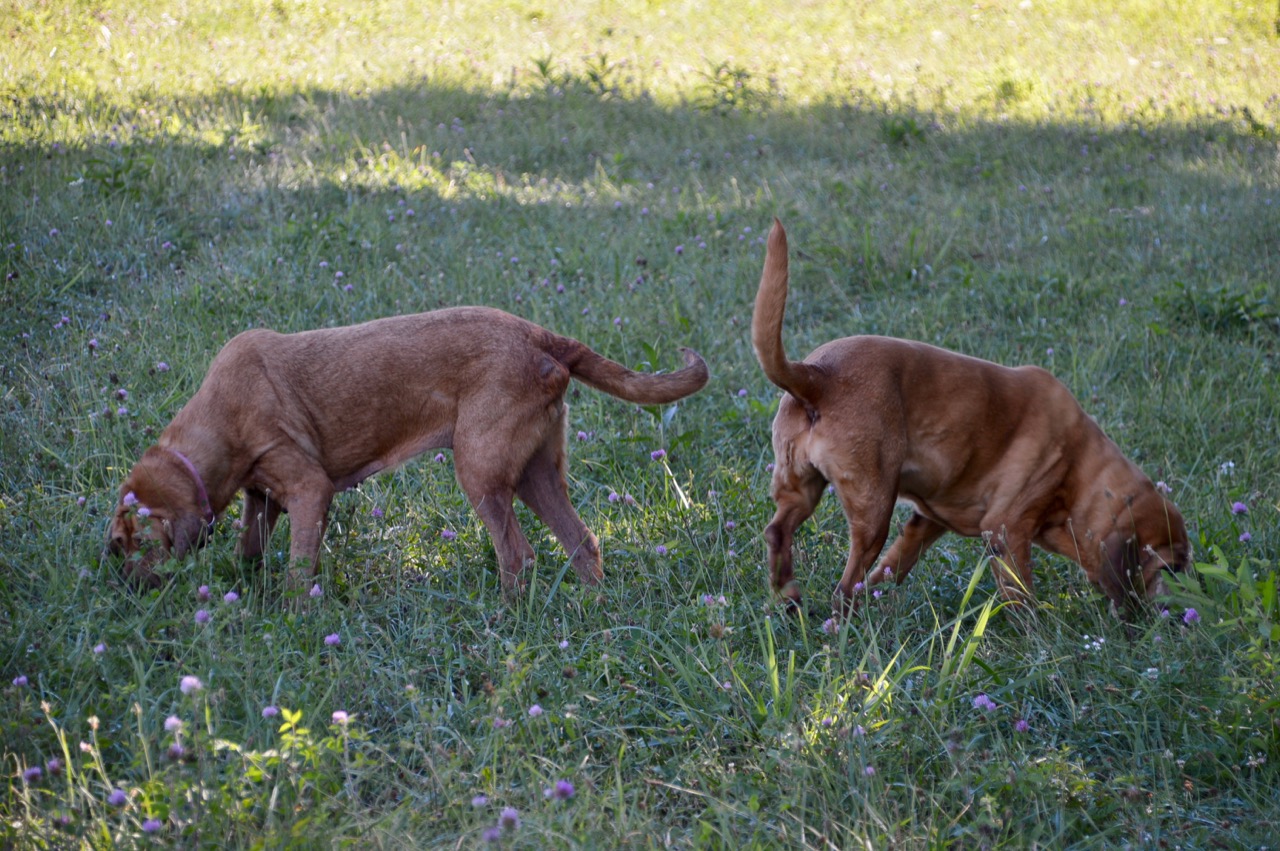 No change in the status of Sadie's lump. Can you see it in the above photo? 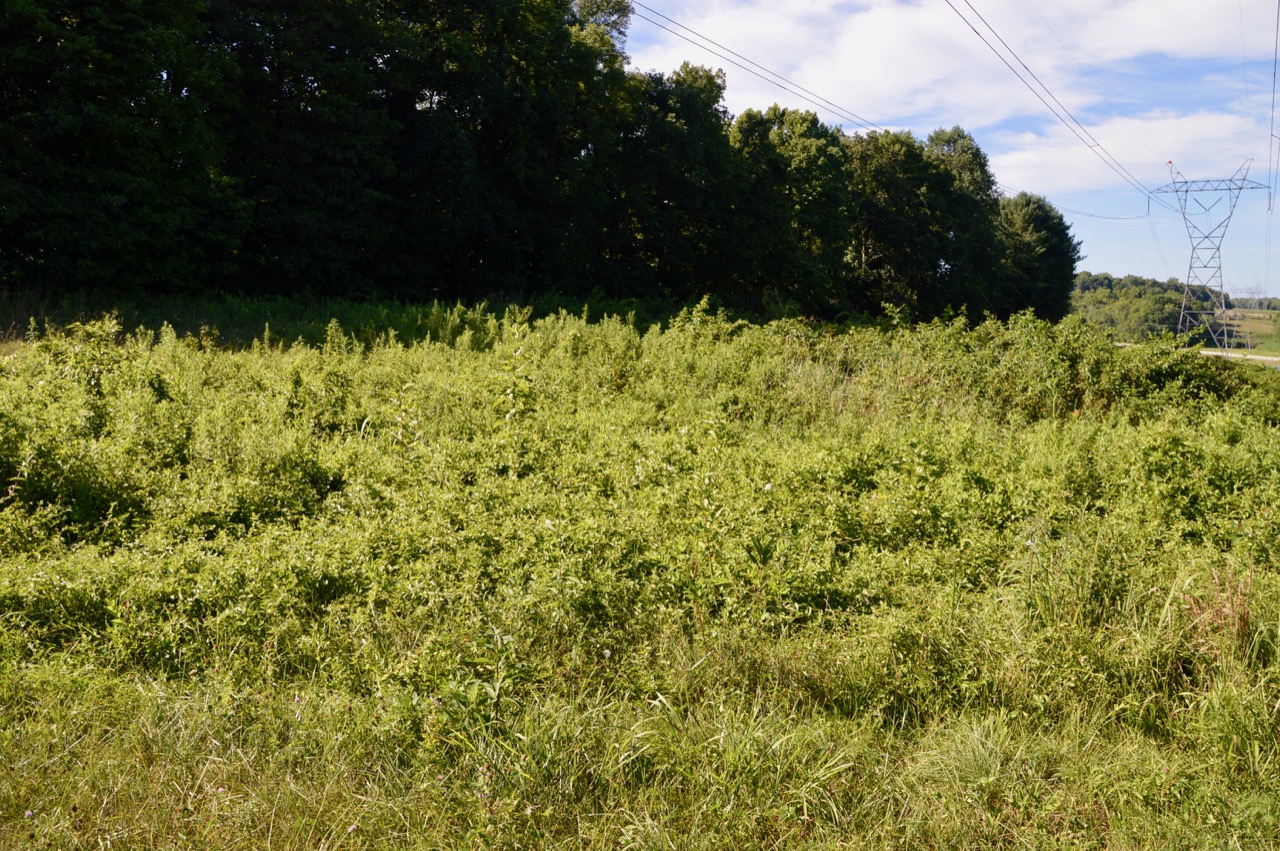 The gully is usually passable in the summer with some slight overgrowth. I never go down into the gully because the floor of it is always wet, and ground soft enough to go over your shoes. I found that out over ten years ago when I was trying to find my other bloodhound Bertha (before Sadie). If it is as thick as it looks then it's no wonder that I have not heard the ATV traffic in this area like I did last summer. Nor have we seen any deer at anytime day or night. 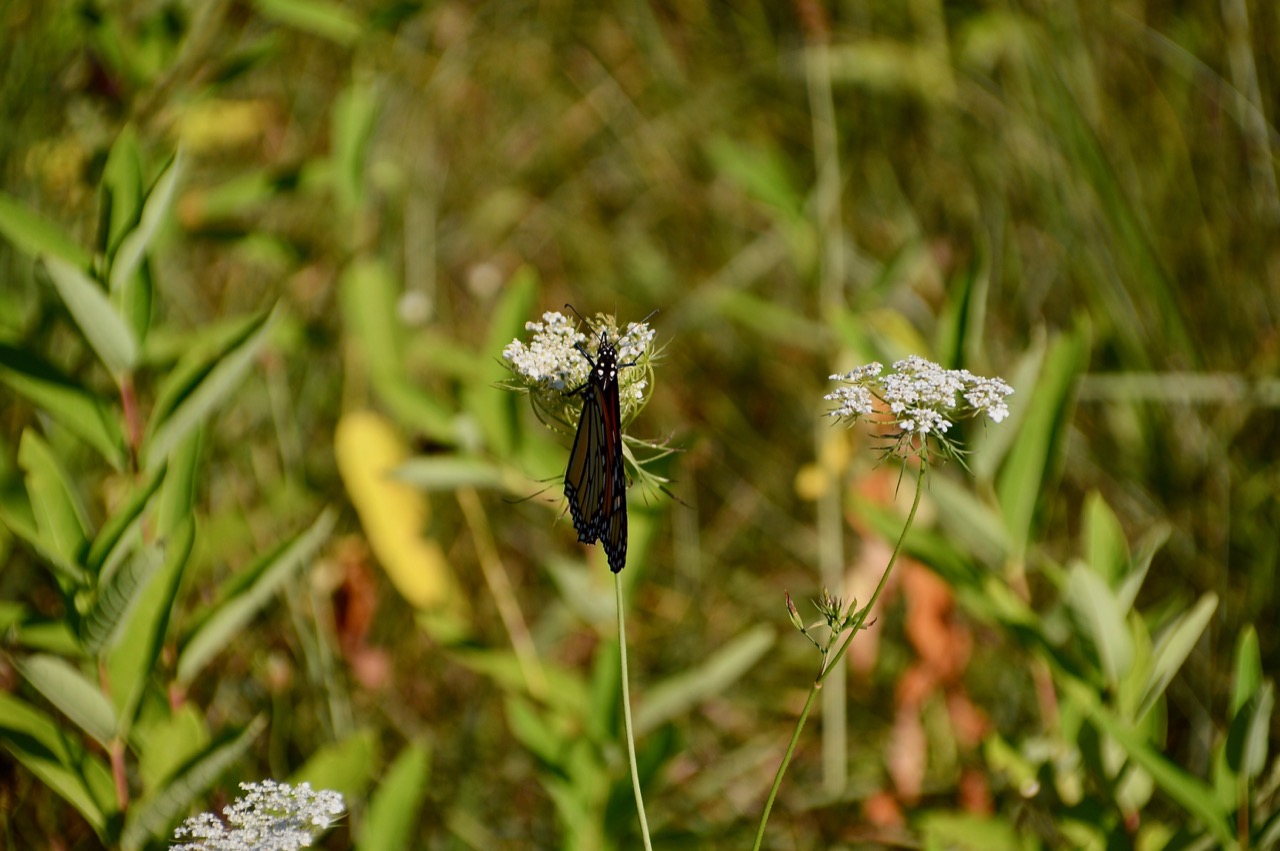 I waited and waited with the camera focused, holding it still and waiting for the butterfly to open its wings. It flew away just as it did. I wasn't able to catch it today with the wings fully open. 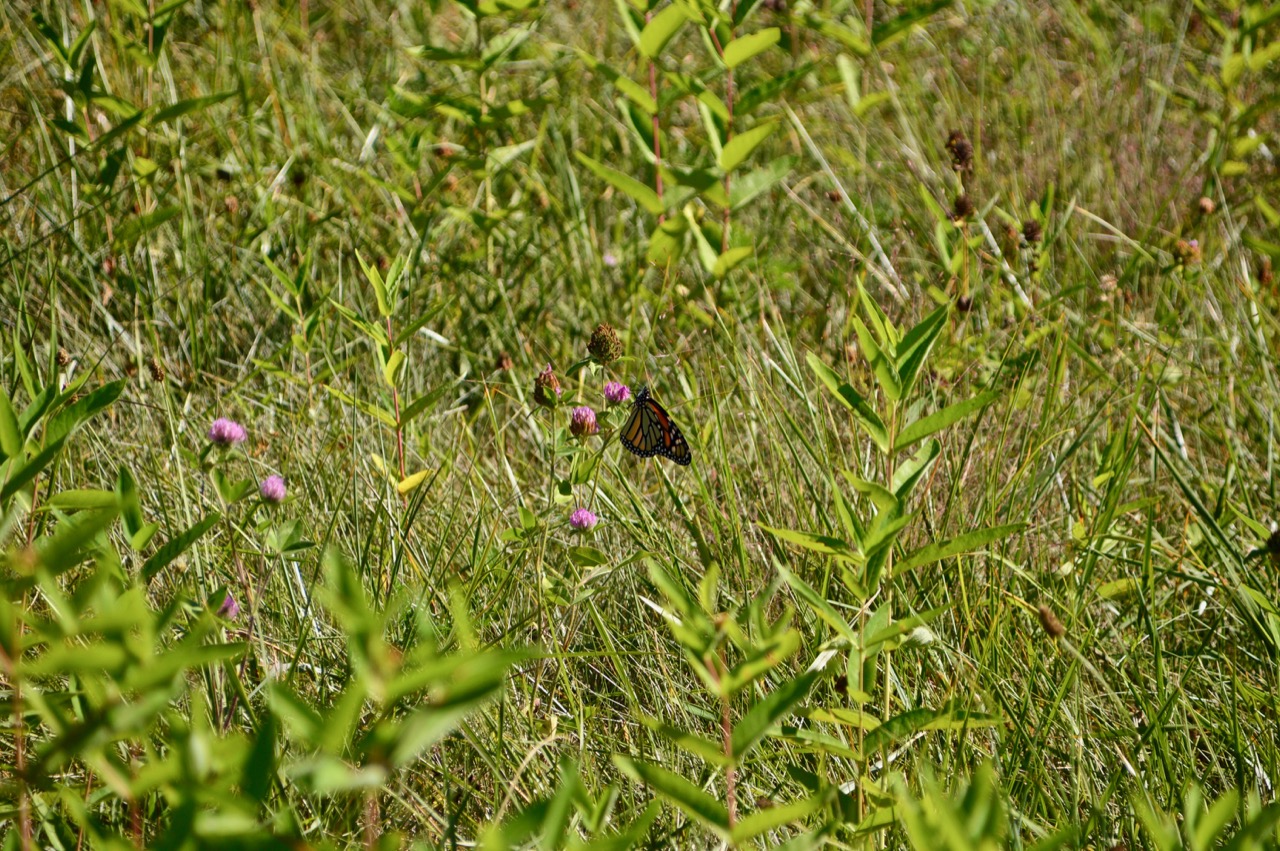 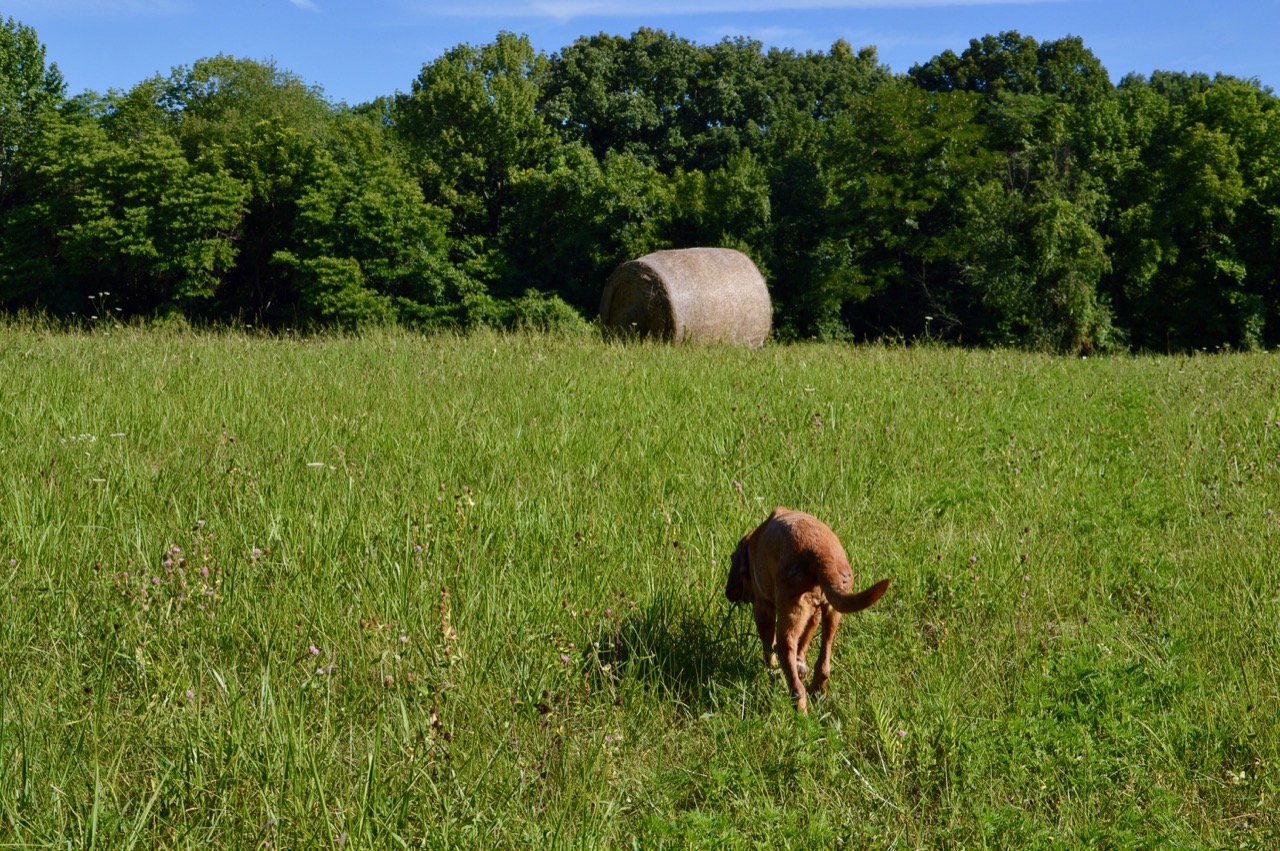 That roll of hay is on our return path. I walk around it on the right side to keep on the path. This morning Stella decided she would try a new route to that roll of hay. Of course she had no plans to walk around it ... but by it ... and try to escape to the woods straight ahead. Ignoring my calls I ended up following her and leading her by the collar back to the path. It's only Wednesday and I can see her theme of the week is to be as stubborn as possible, at least on the morning walks. 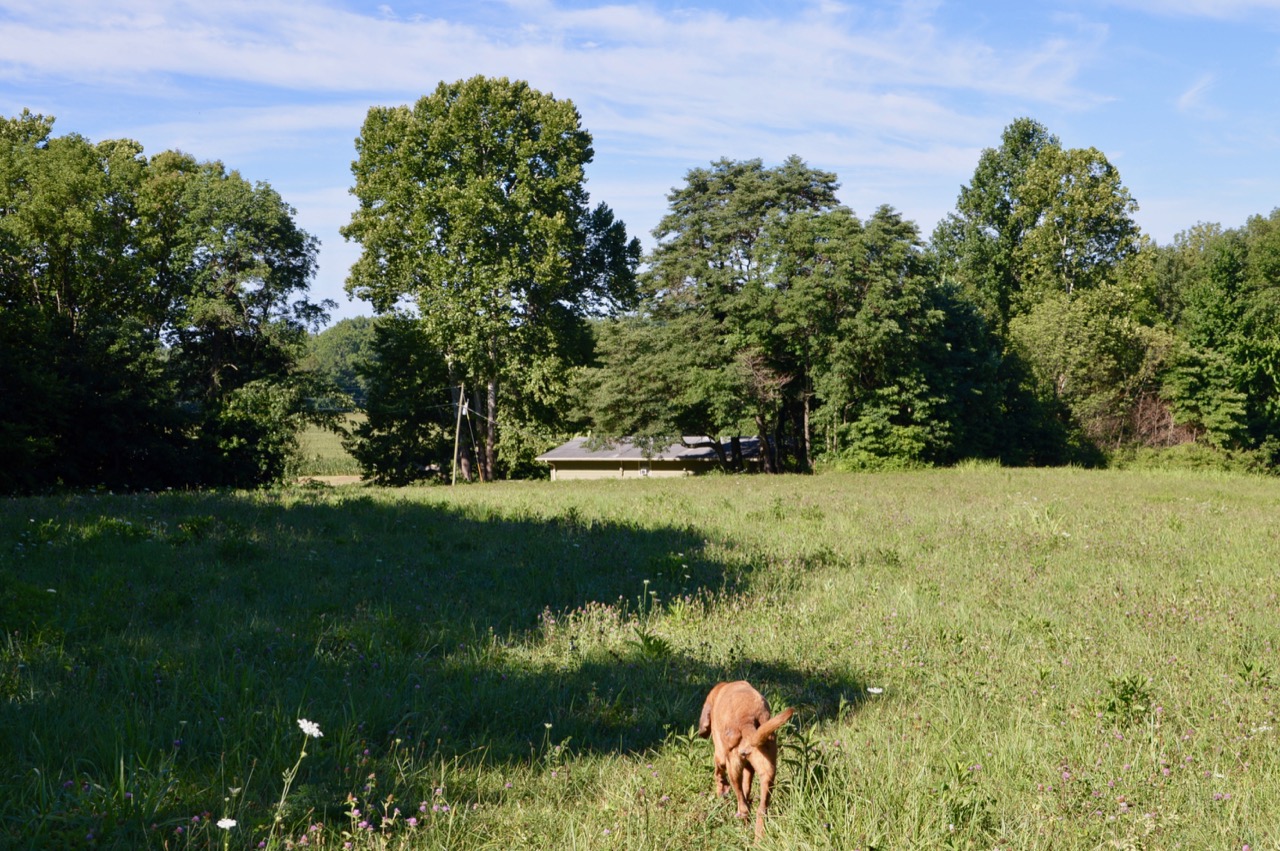 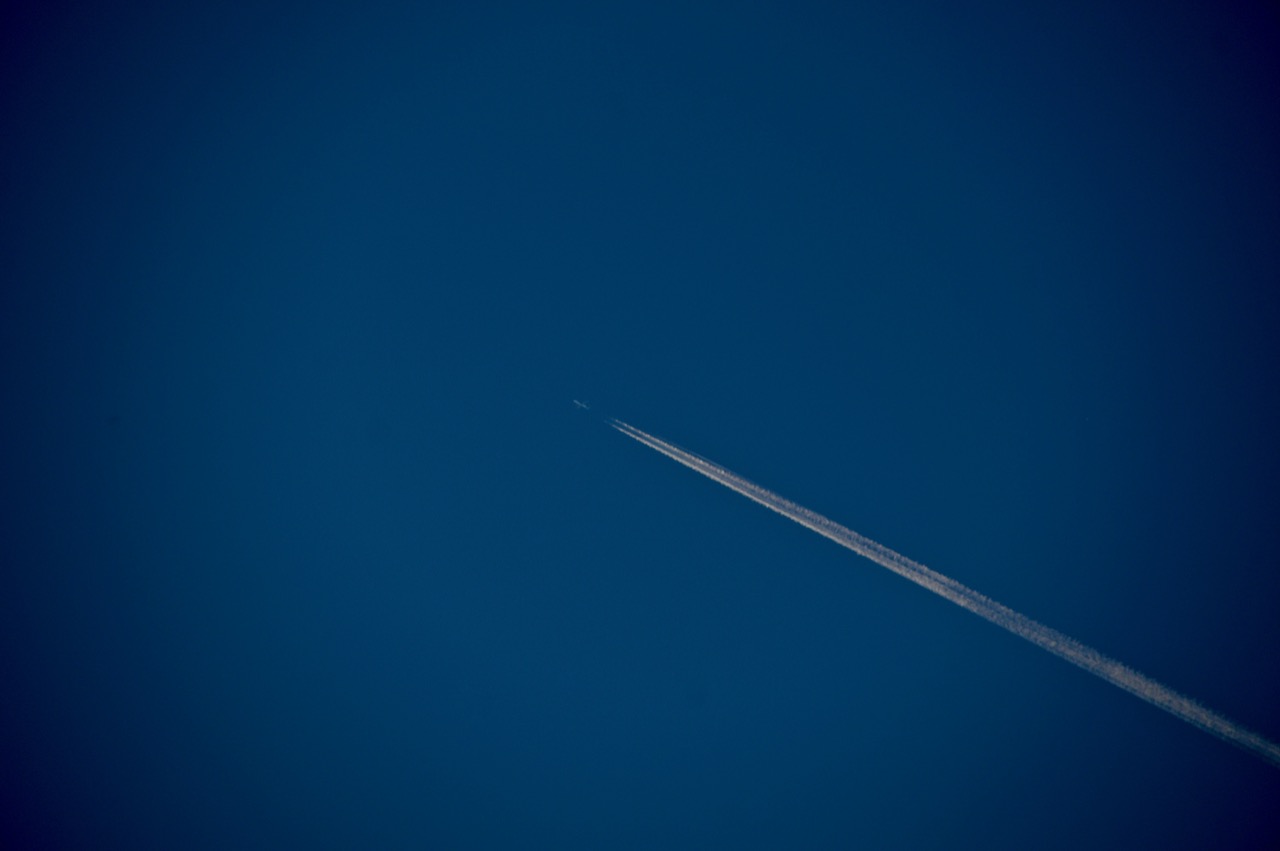 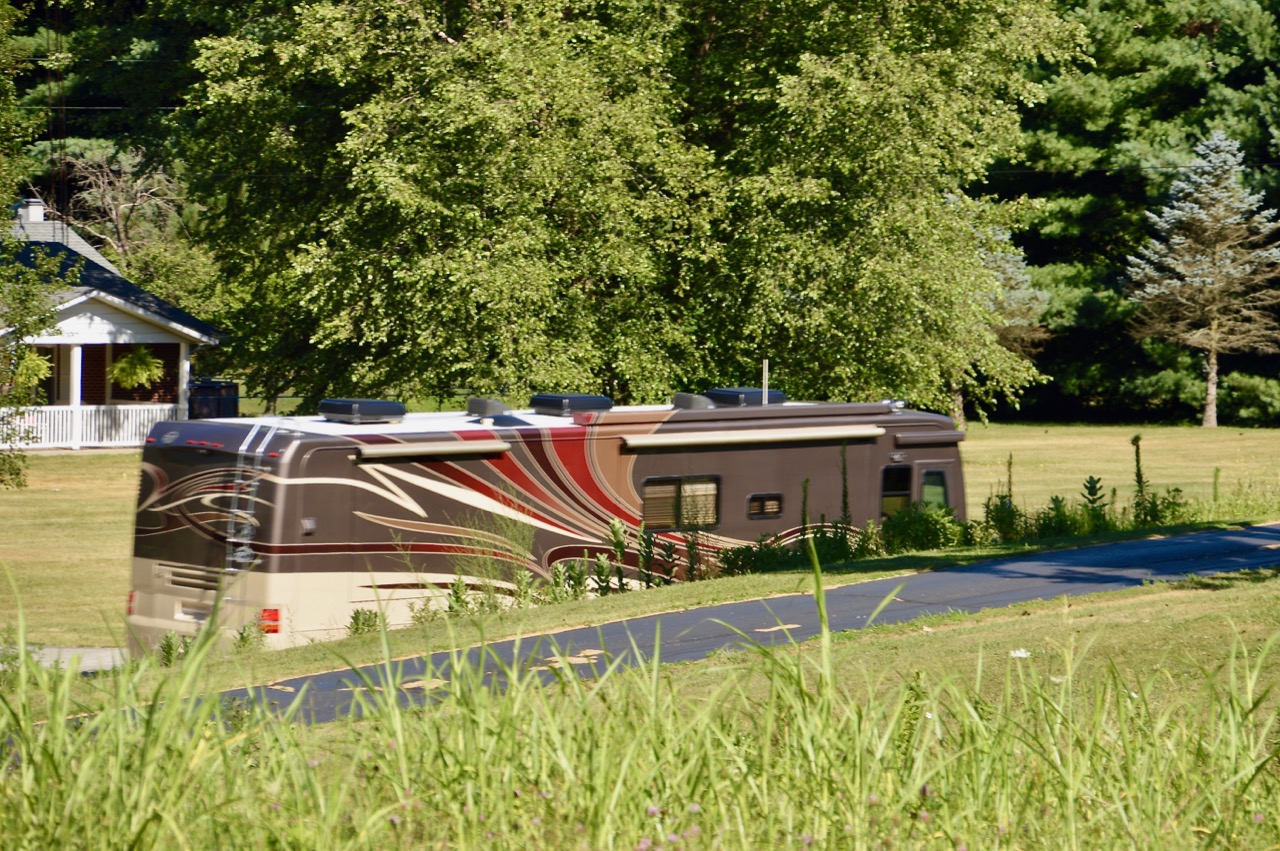 I saw this just left of the house two photos above. So I put my camera on this spot and waited for the RV to fly by. Very nice. 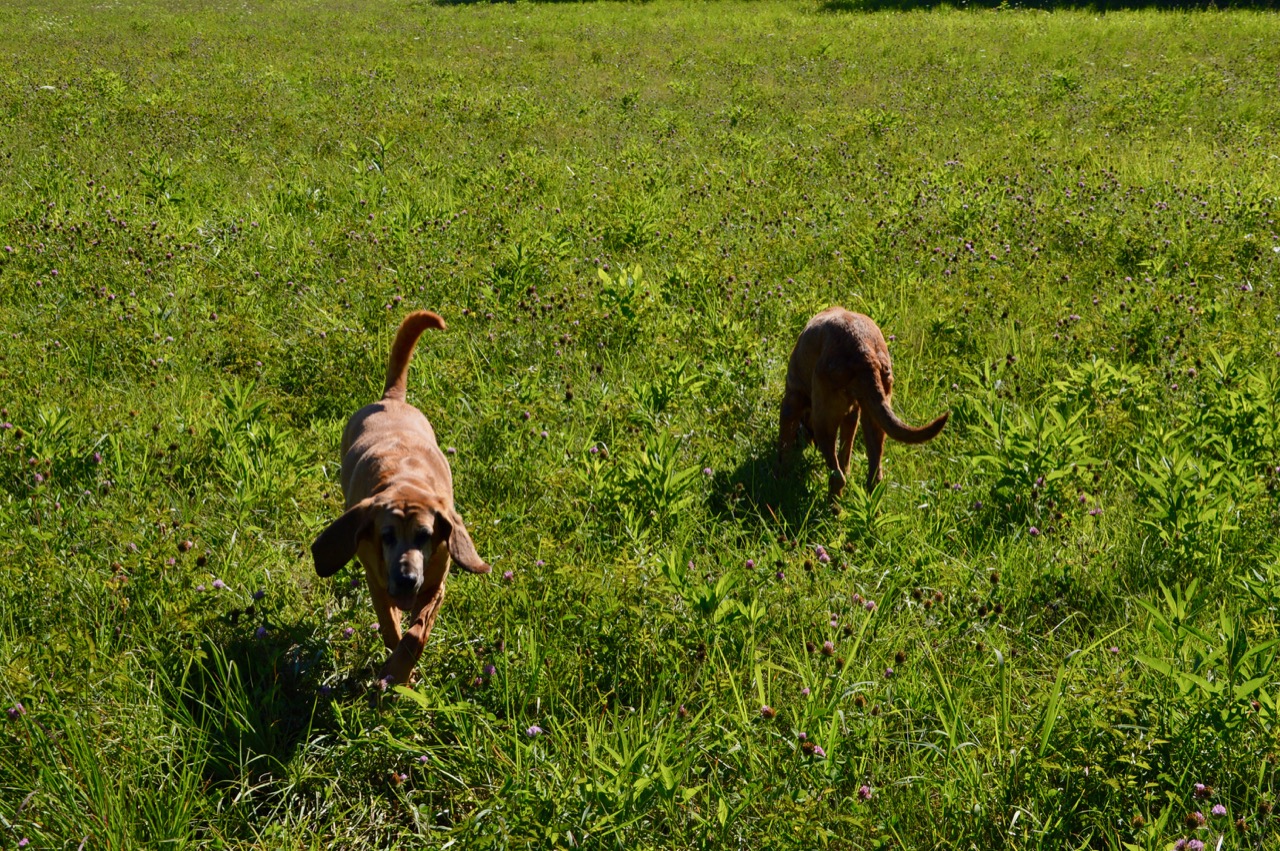 Sadie was ready to head to the yard, then inside where it was cool. Stella could have stayed outside all day I think but the times I have tried that and went into the house without her ... it will not be 10 minutes later that she is standing by the door looking inside, wondering if she is going to get to come inside. 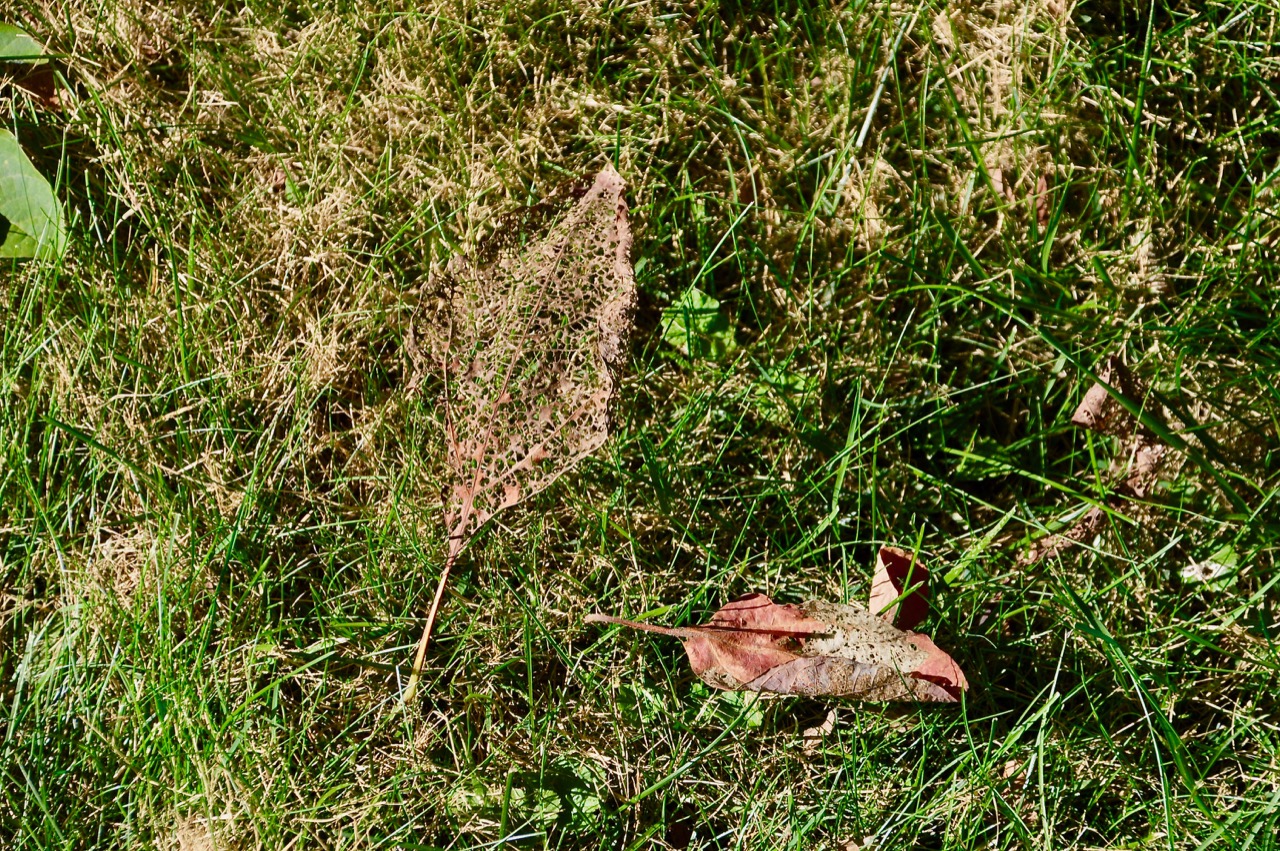 All you plant experts ... any ideas what has happened to this leaf?

After a late night last night downloading the new macOS beta on my iMac and laptop I started the day about an hour later than normal. I remembered that this time of year nothing gets done in the mornings until the Tour de France is over. That takes up most of my July as I like to watch it mid-morning, a taped copy that I start about the time they are actually finishing the race. 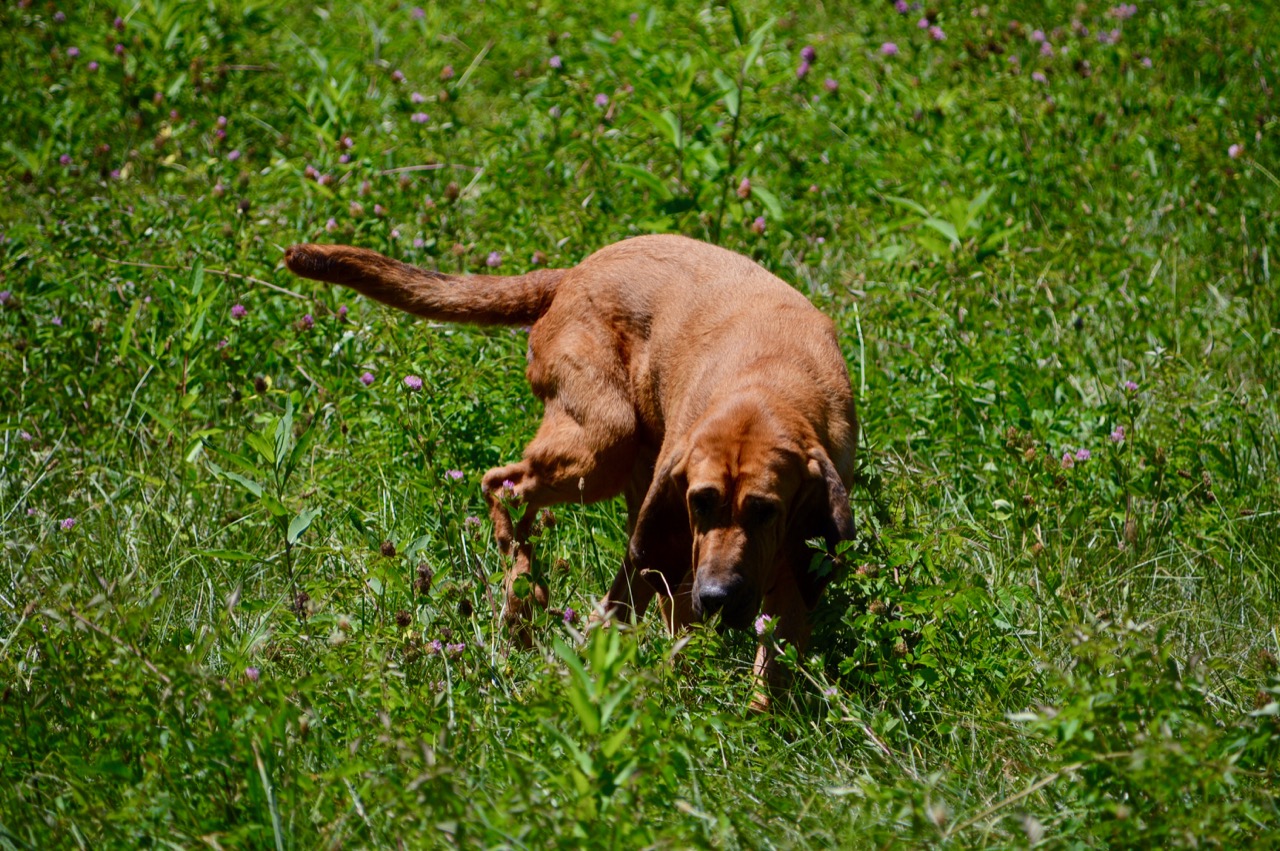 Our afternoon was a little different today. Since the temperature was only 82° we finished our afternoon walk a little before 3pm today. I also took my camera with me instead of taking Stella on the retractible leash. I wanted to see if I could see some butterflies, so I turned the 'beep' sound off on my camera that tells me the photo is in focus. This morning that small beep was making them fly away. Also that afternoon light is much better for taking photos. 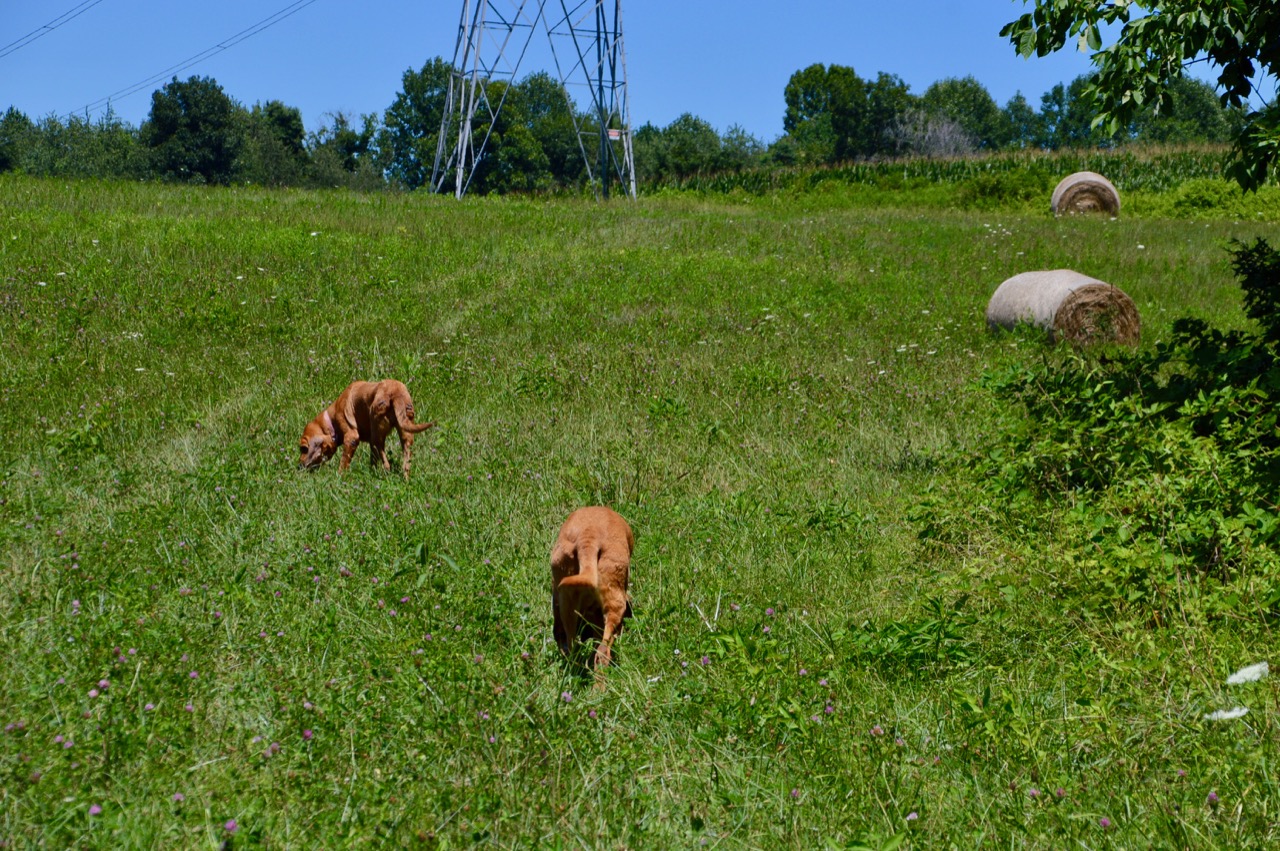 The funny thing was I did not see one butterfly as I am making the first turn of the walk. They were out yesterday afternoon but not today so maybe we were too early. 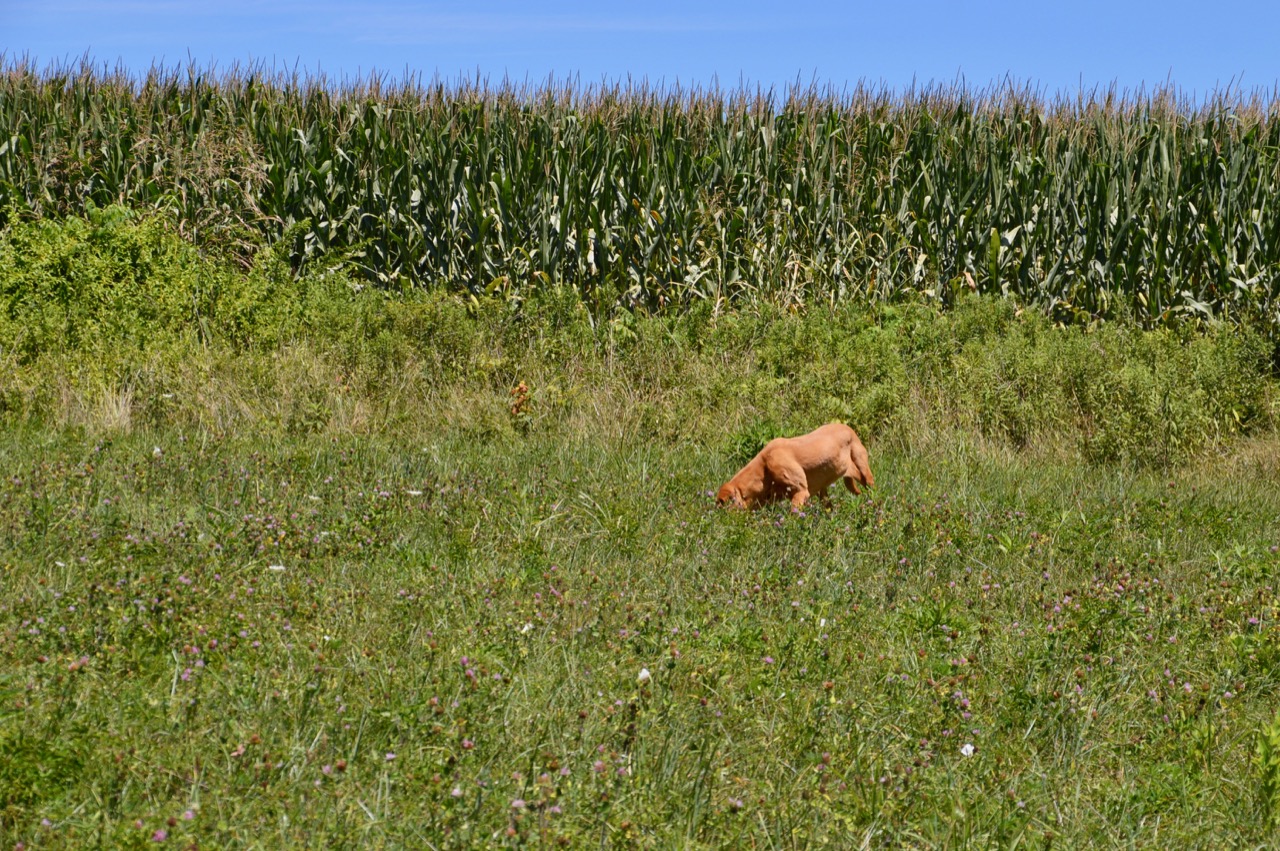 Stella and I had walked around the roll of hay as we started our return ... Sadie decided she was going to get a little running in this afternoon. Everything may look green compared to where you live but this field is really dry. I could hear the grass 'crunch' with each step and was glad we didn't have fires anywhere near. 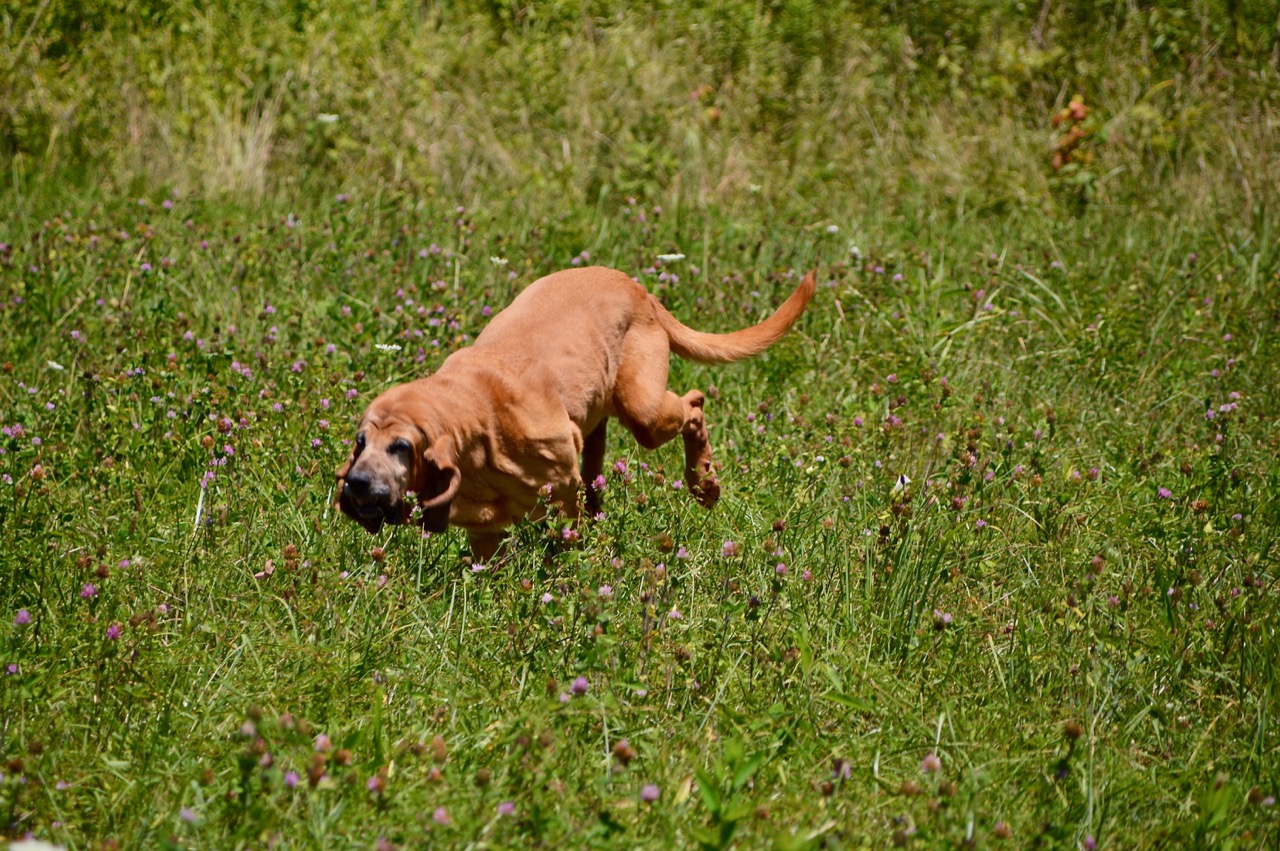 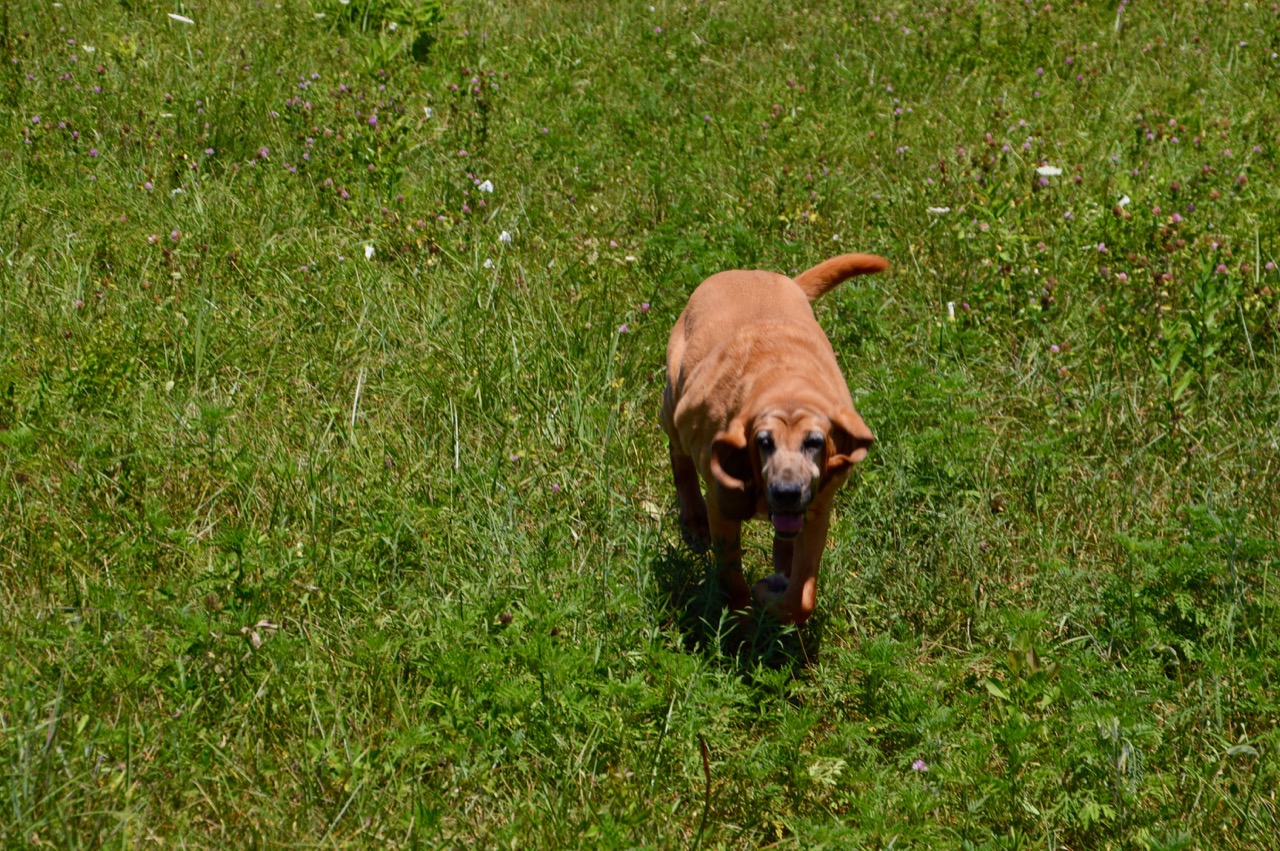 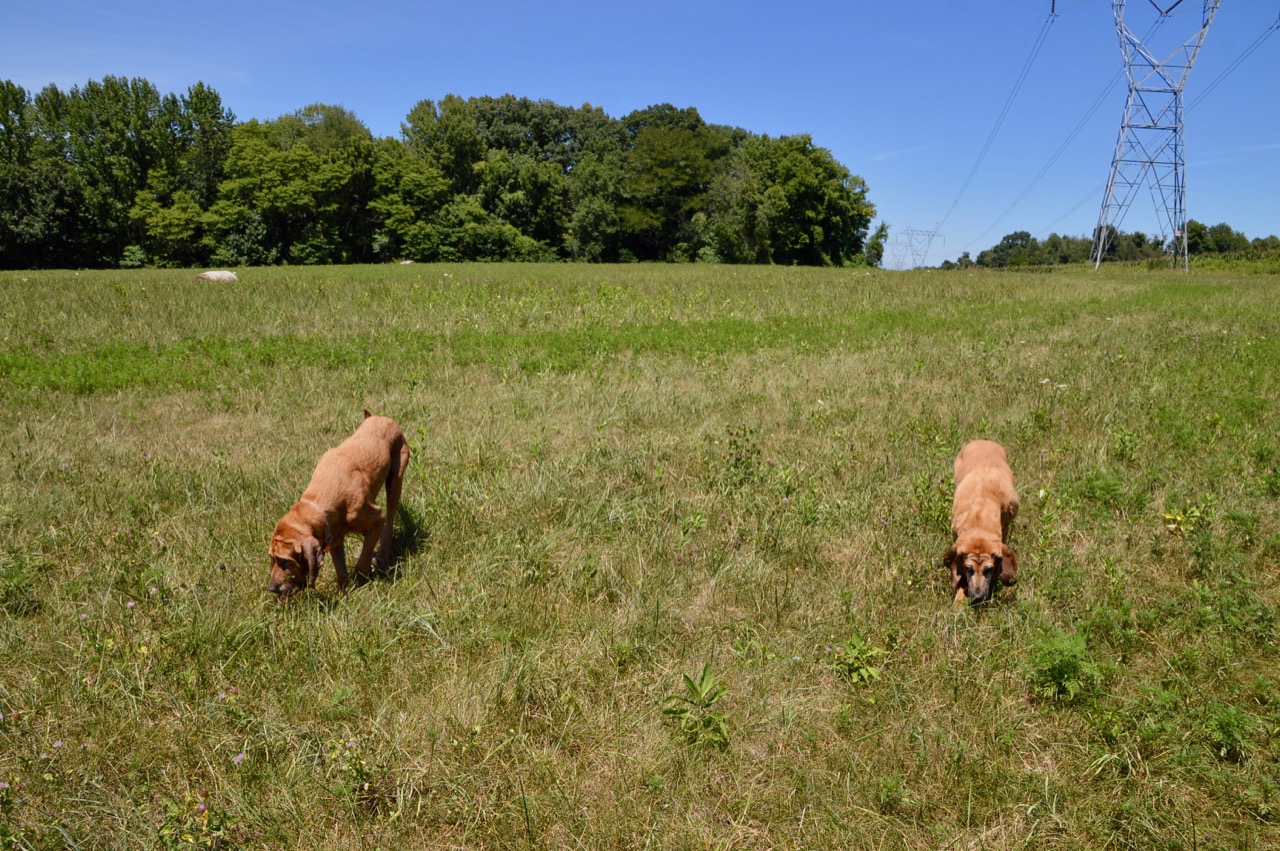 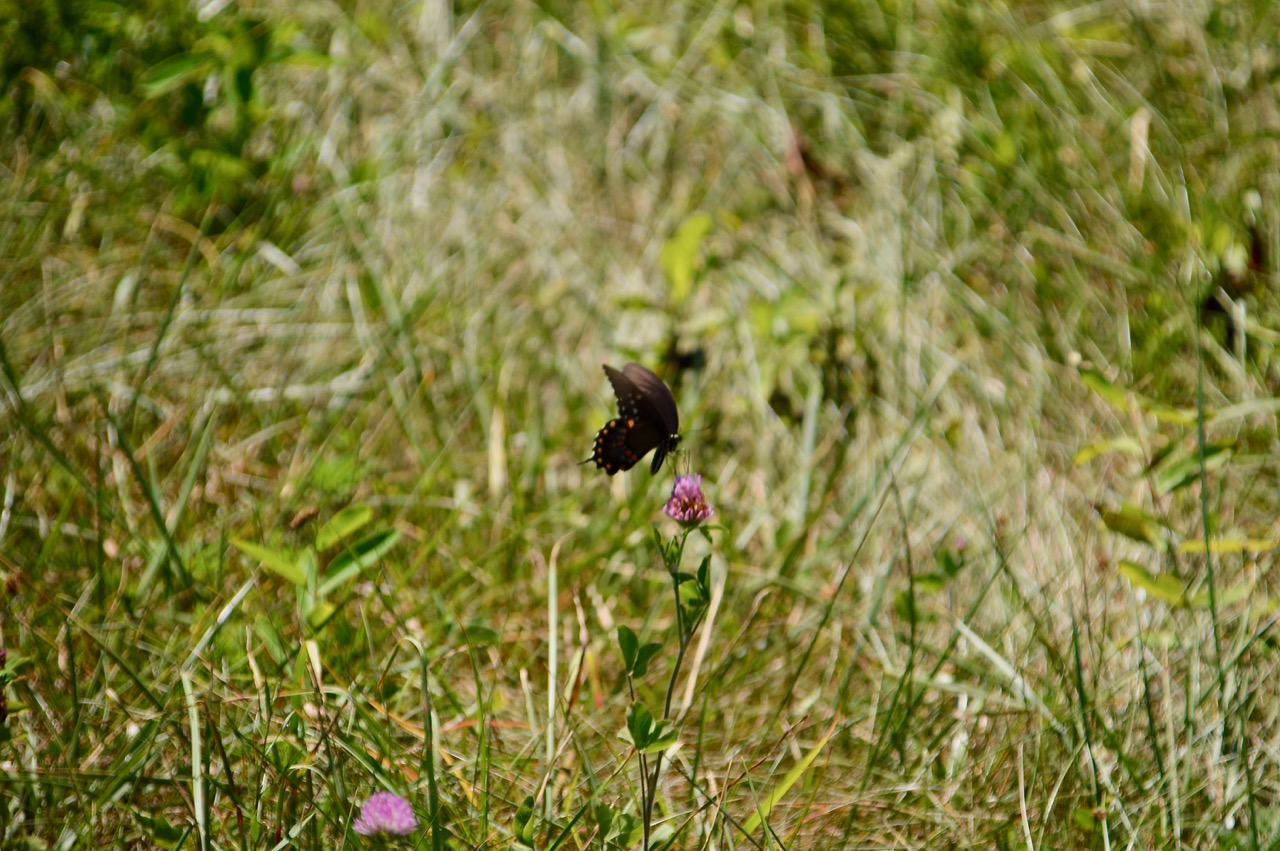 As I turned on our 'alternate path', here was the first butterfly up ahead. They were in the hover mode today and really didn't sit still to where they would spread their wings out all the way. 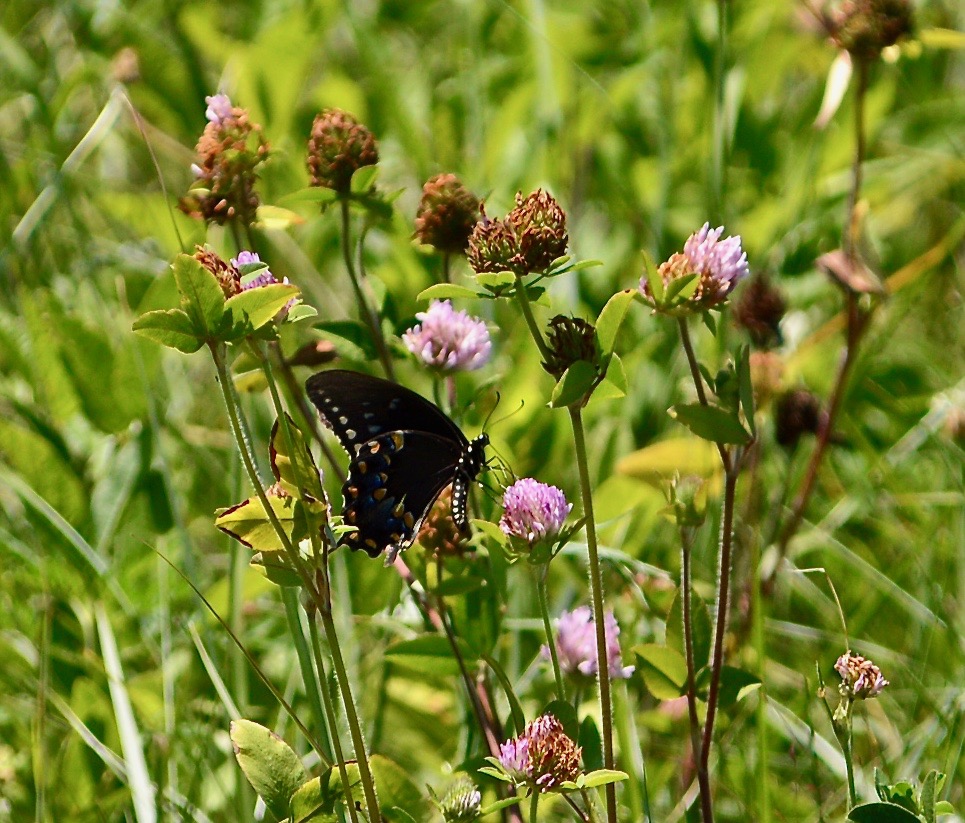 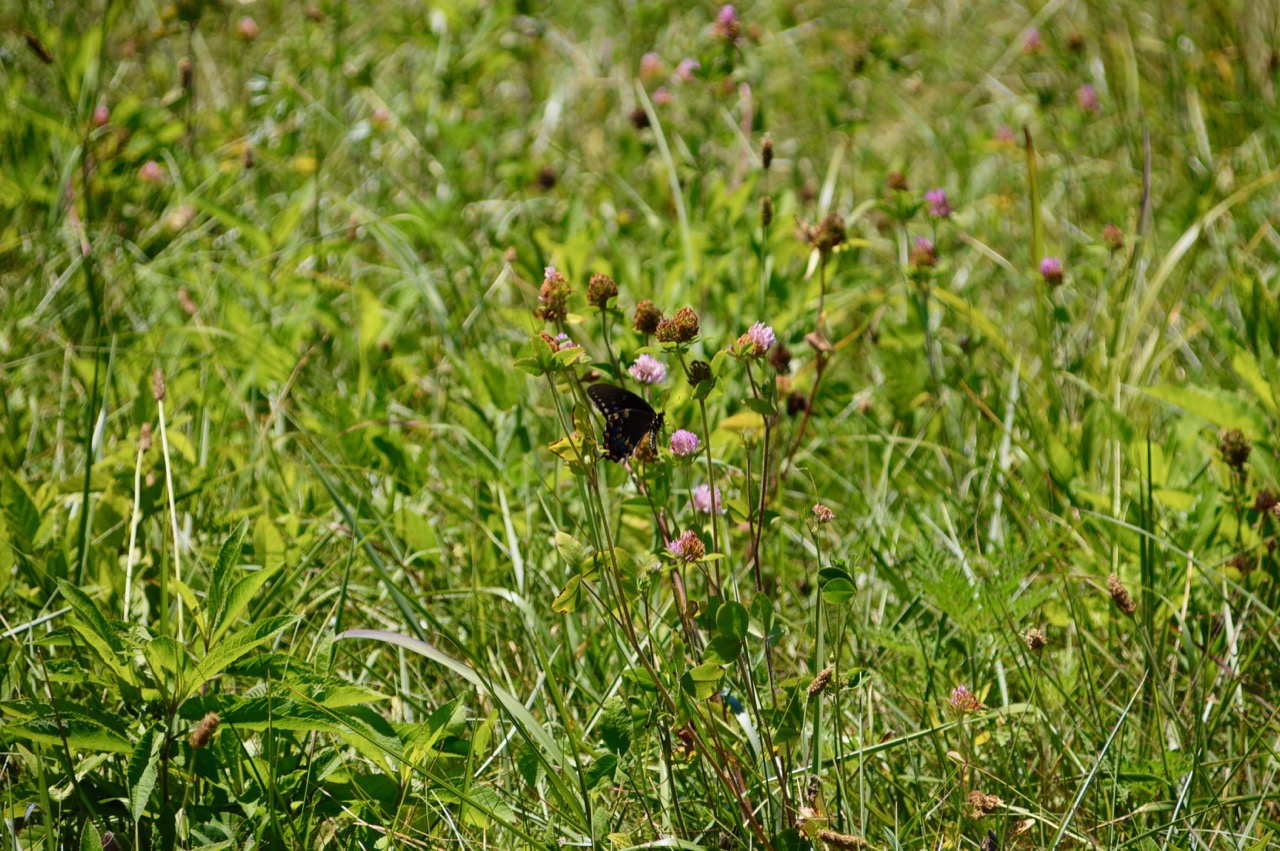 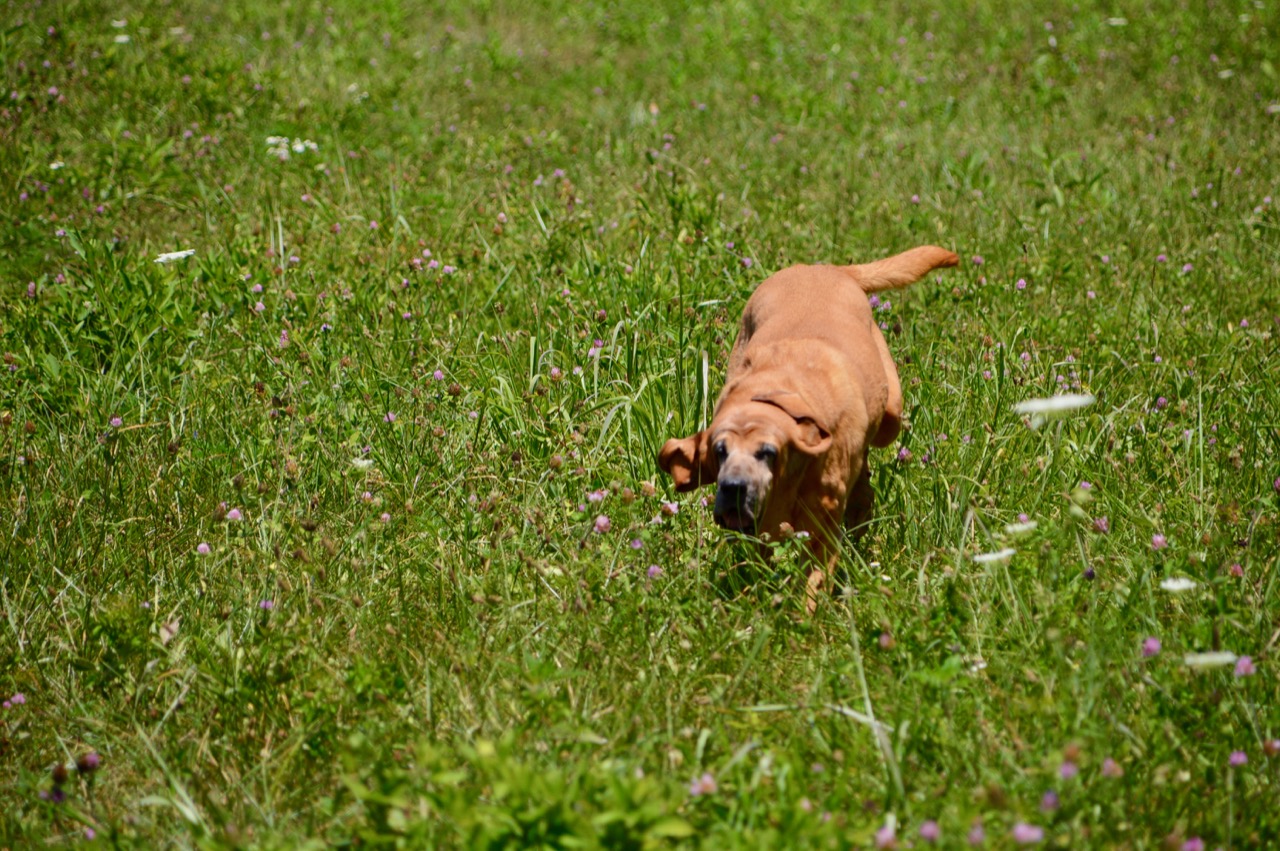 Sadie glanced up seeing Stella and I were way ahead ... she decided she didn't want to be left behind and started her second run of the walk. 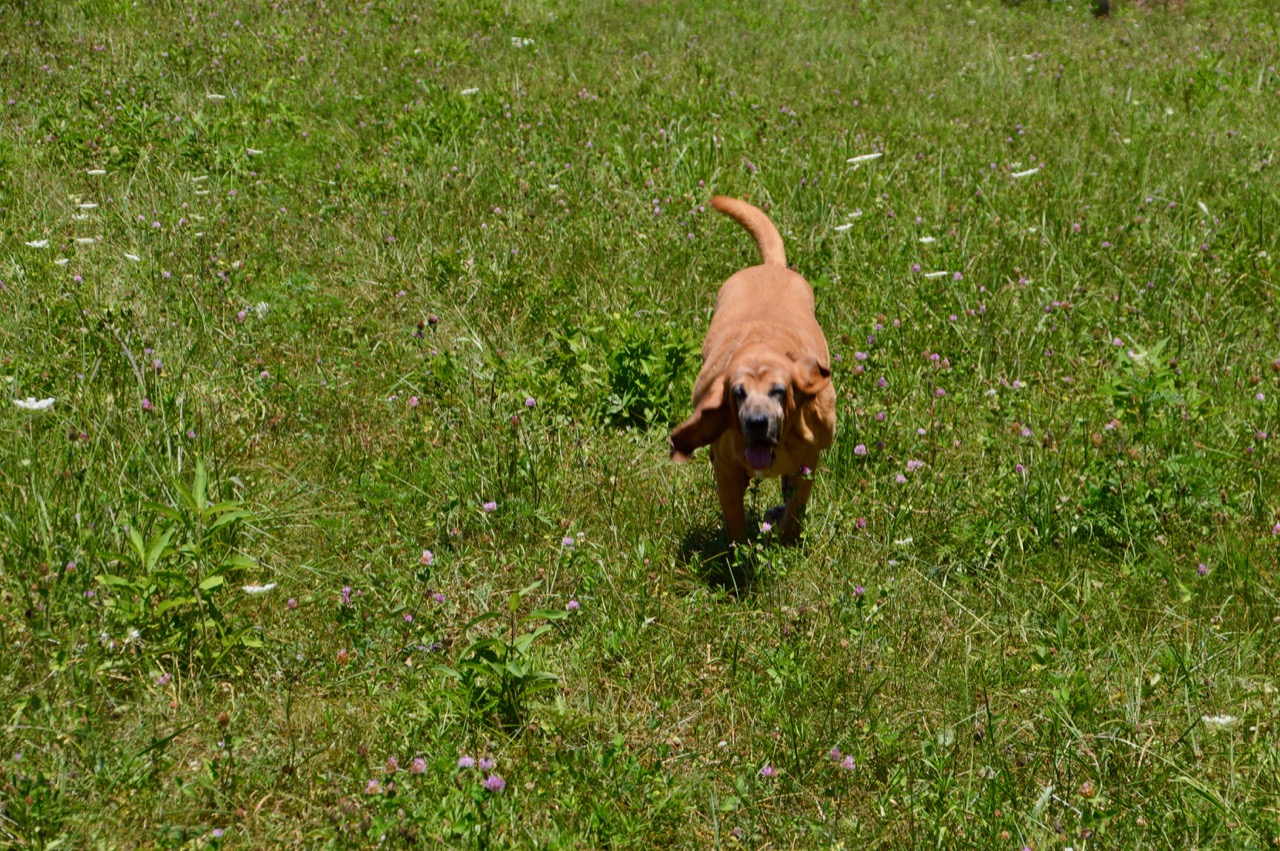 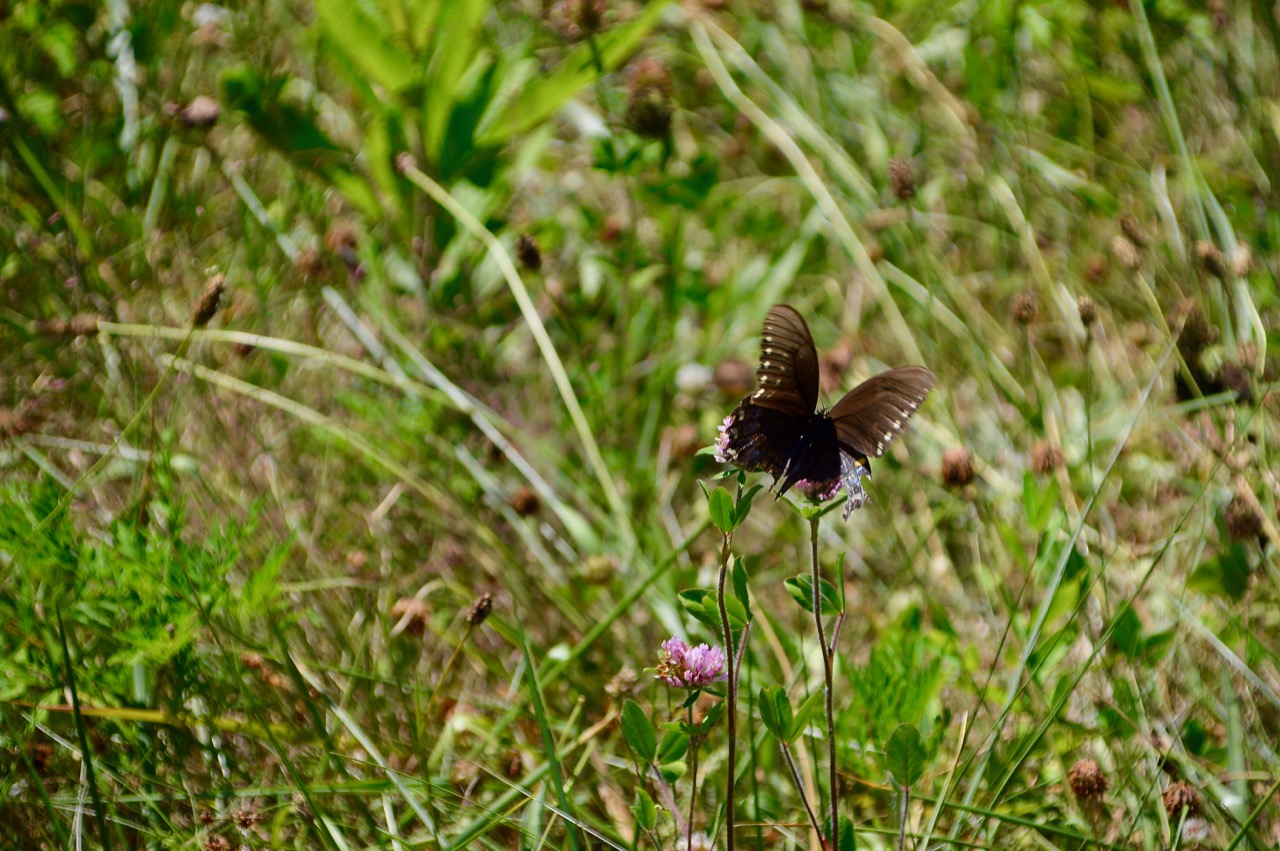 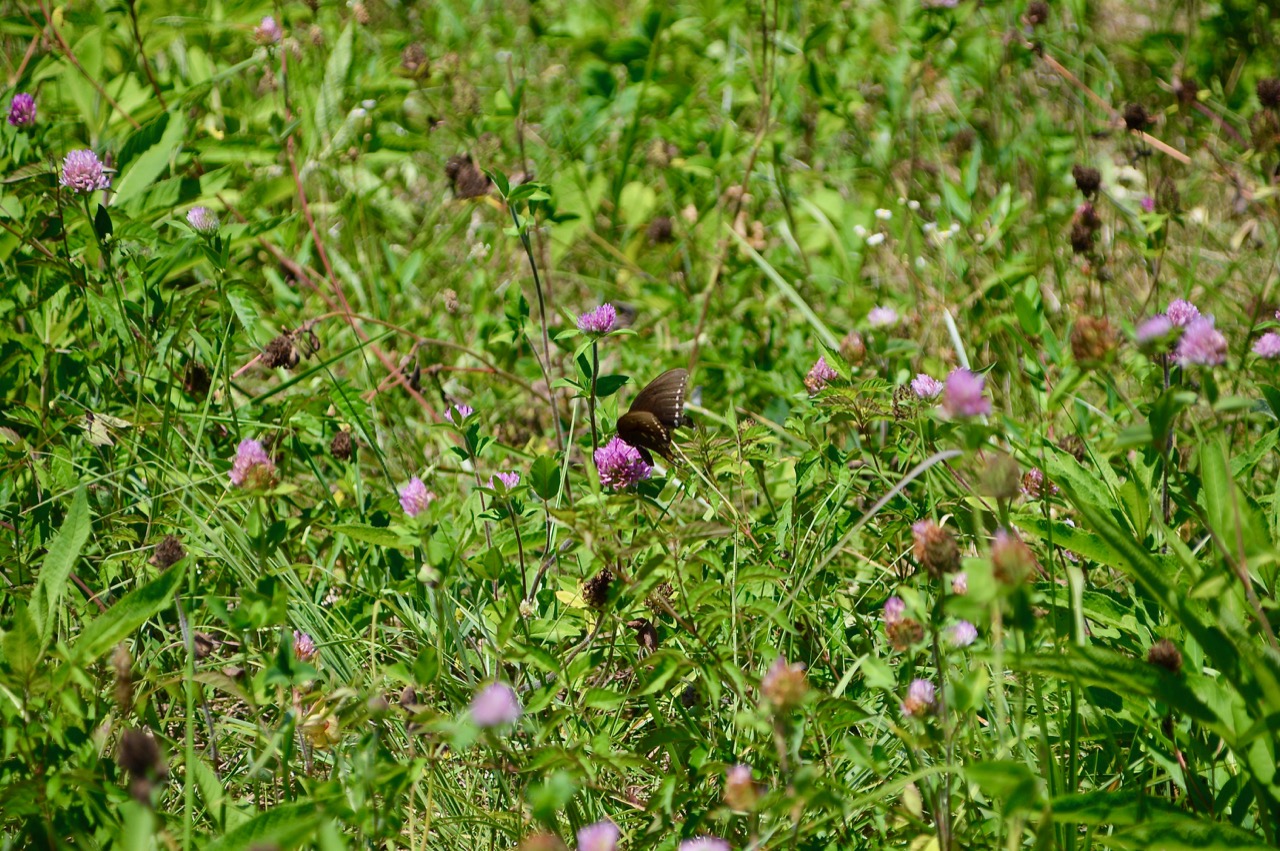 It feels like a 10° drop in temperature as soon as we step inside the shade. I was already at the corner of the house ready to go inside but both bloodhounds were enjoying the shade. 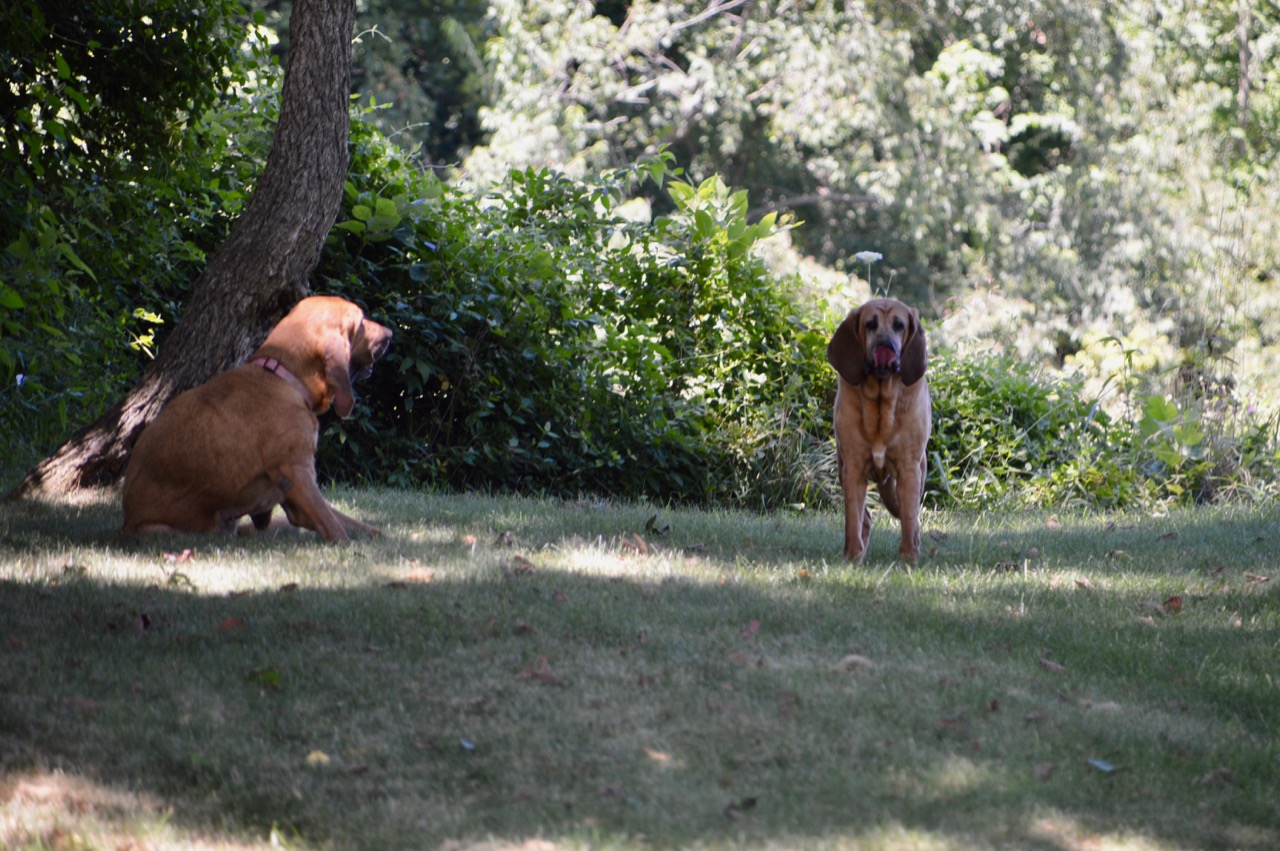 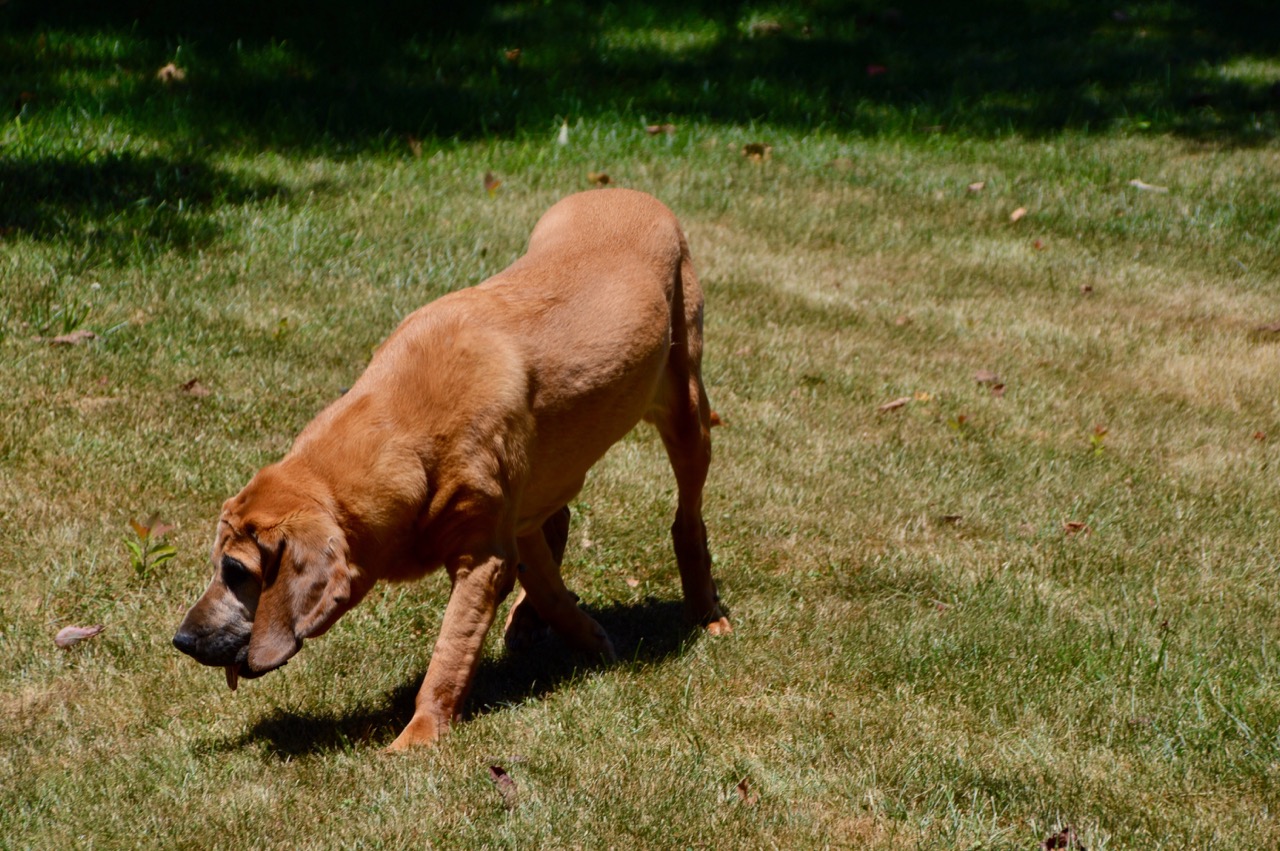 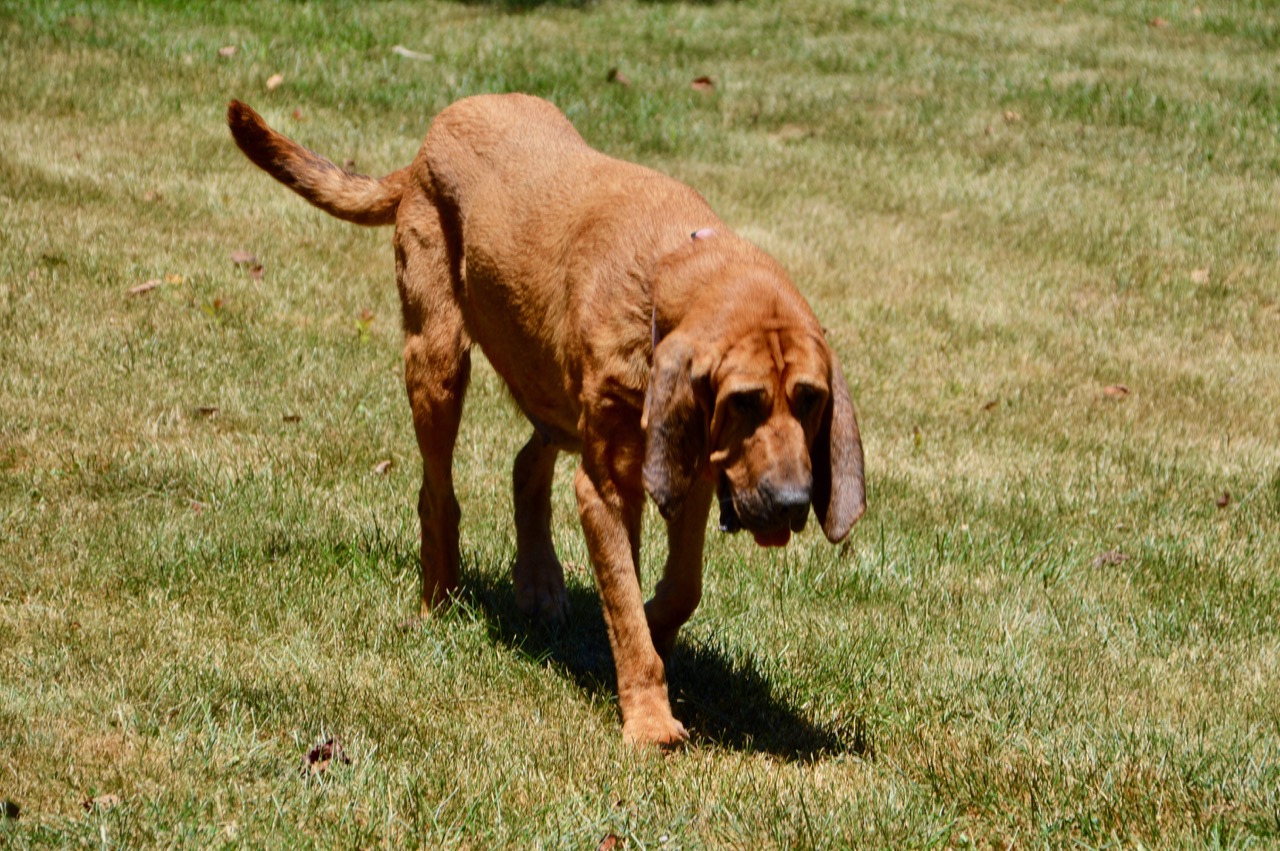 You can see by two tongues hanging out, that Sadie and Stella felt it was a lot hotter than 82°. They will be wishing for this weather next December.

Phase III of my beta macOS is working better. I can see where Apple programmers have made some slight changes as they move to an official release this fall. They have made the font brighter than the grey color Phase I & II had. The computer wakes up faster from the sleep mode. Even in the Photo program, the edit button's font was changed to black making it much easier to read than the very light grey on a yellow button. So I guess they really do pay attention to the feedback sent in by beta users.

What is strange in this OS so far, when I log into my blog it sends me to the dashboard but when I click "view blog", where I either want to read or make comments on other blogs ... Safari and Google Chrome log me out ... Firefox keeps me logged in. You would think since Google owns Blogger which owns this blog that they would always keep me logged in. I have a feeling that Google and Apple will not work smoothly in the future when both platforms are used together.

They don't have their desktop page fixed yet, where the large pile of sand in the Mojave changes color depending on your location. For instance the sky and sand dune will get darker as it gets later.

For those that have either signed up to follow the blog by email or have requested me to put their email address in my automatic notification system inside the blog ... I don't have any answers on why it is not working properly. There is nothing I can do to change the code to make it work as I have to work with what Blogger has given me in their template.

The weird thing is, when I put my own email address into the box to notify me of a new post ... I received the invite immediately in my inbox asking me if I wanted to follow the blog. Other's say they never received the invitation email. When I signed up to follow by email by using the box on the right side of the blog page, I too have to wait 14-16 hours before I received an email copy of the latest blog post. To me that is not right either.

Since I have no answers I suggest to those readers that still want to follow the blog on your own. Click the title 'Hounds and Other Stuff'. That will load the correct URL in the address bar, for you to either copy and paste into your Feedly Reader account or add it to your blog roll. If you do not have a Feedly Reader account and/or a blog ... then bookmark the blog or make it a favorite (depending on your operating system) and click on your bookmark/favorite when you are wanting to read the blog. If there is a new post it will automatically be at the top of the home page.

Hard to believe another week is halfway over here in 'the tropics' of Southern Indiana.
at July 18, 2018