The Bloodhounds Supervise My Saturday Morning 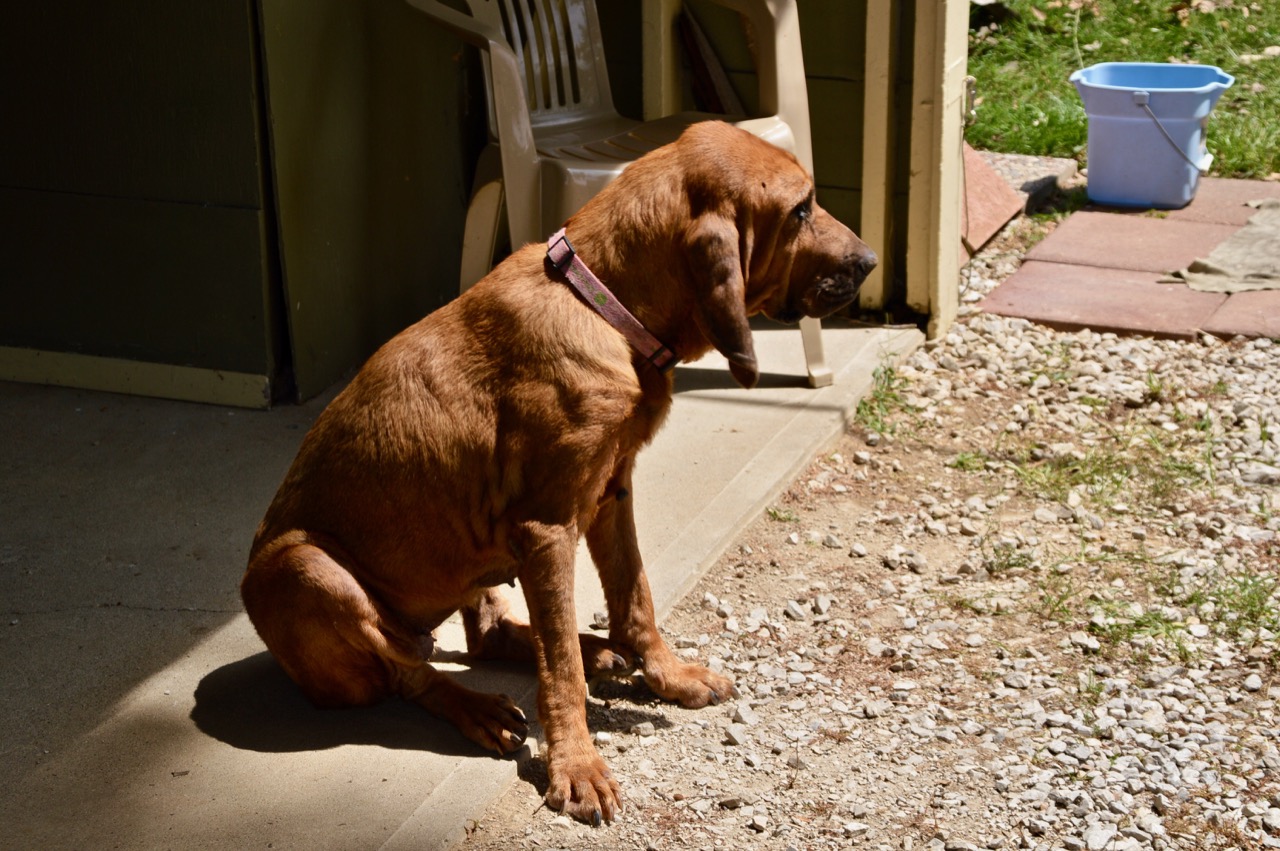 Stella did not run off during the 4 hours she was outside while I worked. She started by sleeping in the sunshine on the backside of the house, moved to laying in front of the Z4 to nap while I pulled weeds in the flowerbeds, then moved to the deep corner of the shaded carport while I washed the car. By the time I took this photo she was ready to move back inside for her afternoon nap, laying right in front of a floor fan. 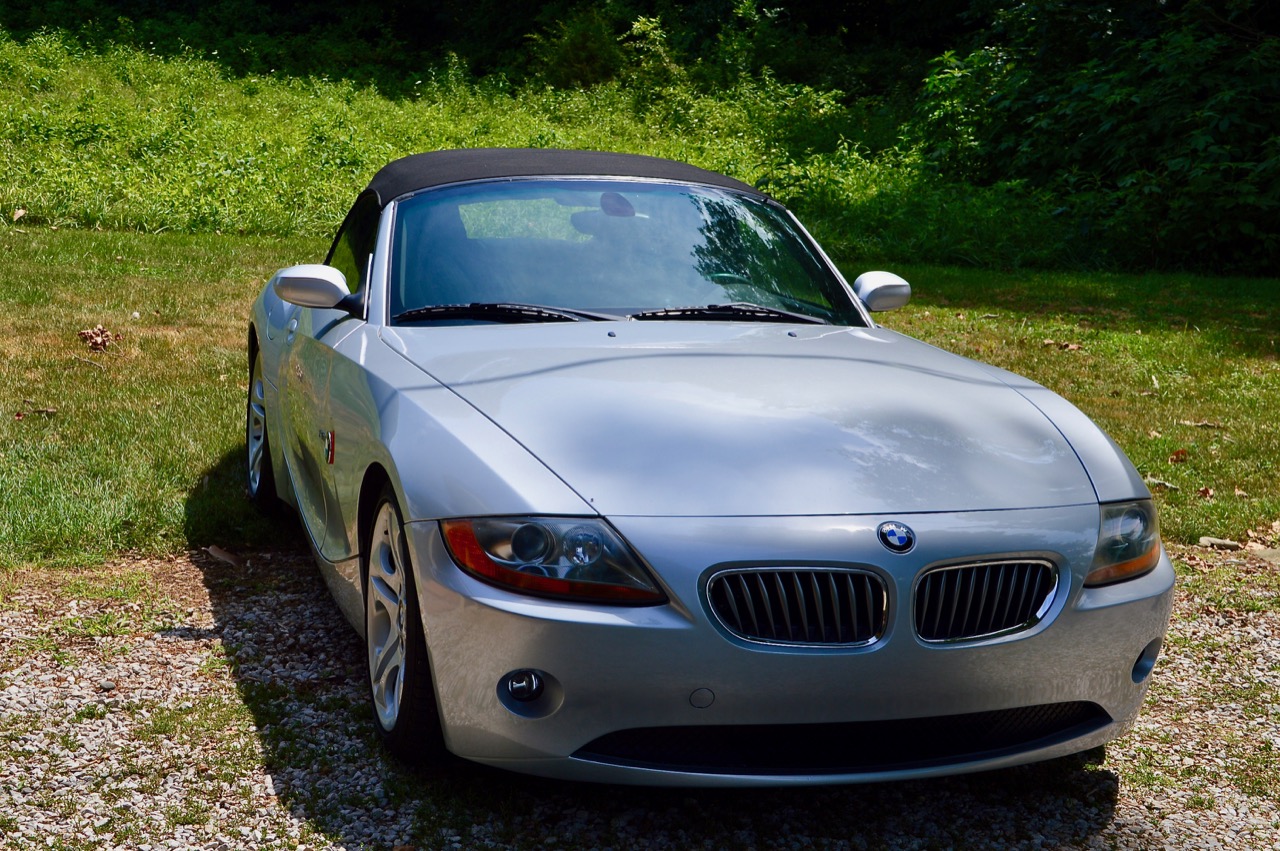 By 1pm I was finished with a few things I wanted to get done. I washed the Z4 in the shade but pulled it into the sunshine after I dried it off so the top could be completely dry before I lowered it on my next drive. Since it's washed it will go under the car cover when it's not on the road. Actually all three hounds were outside for most of the morning. Right after the morning walk I pulled both vehicles outside so I could get the ladder out of the shed, for me to use to get on the roof. 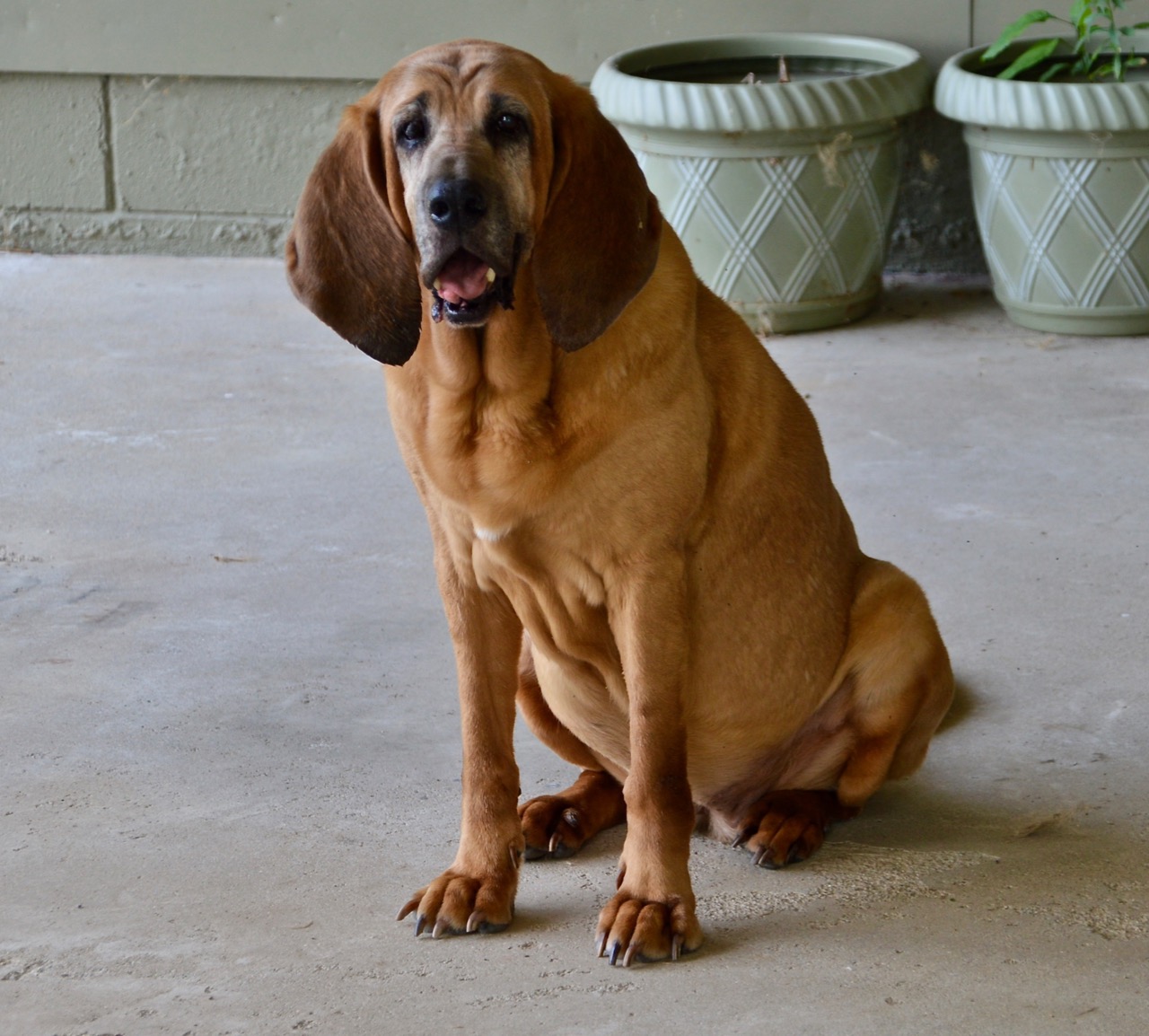 If you remember Sadie cannot just lay down outside and relax like Stella. Her nose keeps her active but even she did not wander out into the field after our morning walk. While I was on the roof she inspected the burn pile. While I pulled weeds, she went back inside to see if there might be some bits of kibble that may have been missed for lunch. While washing the car she stood in the shaded carport watching my every move and finally gave final approval of my sweeping the Z4 parking spot. She never laid down once in the 4 hours were were outside. 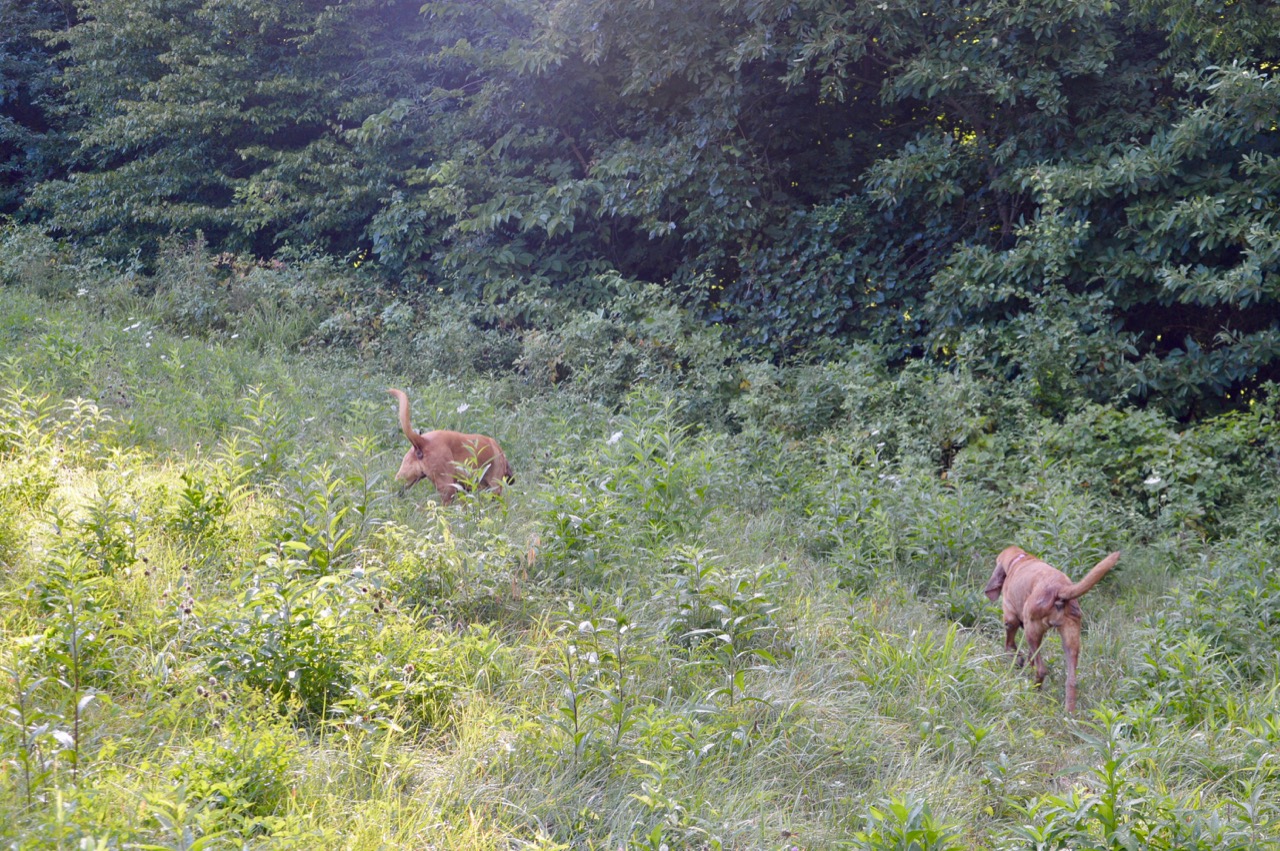 We had an early walk this morning for the first time in a long time. I was up early because I went to bed early (11pm is early). At no time during the day did the AC ever turn on with the thermostat set at 74°. All the windows were open to pull in the cool temps. 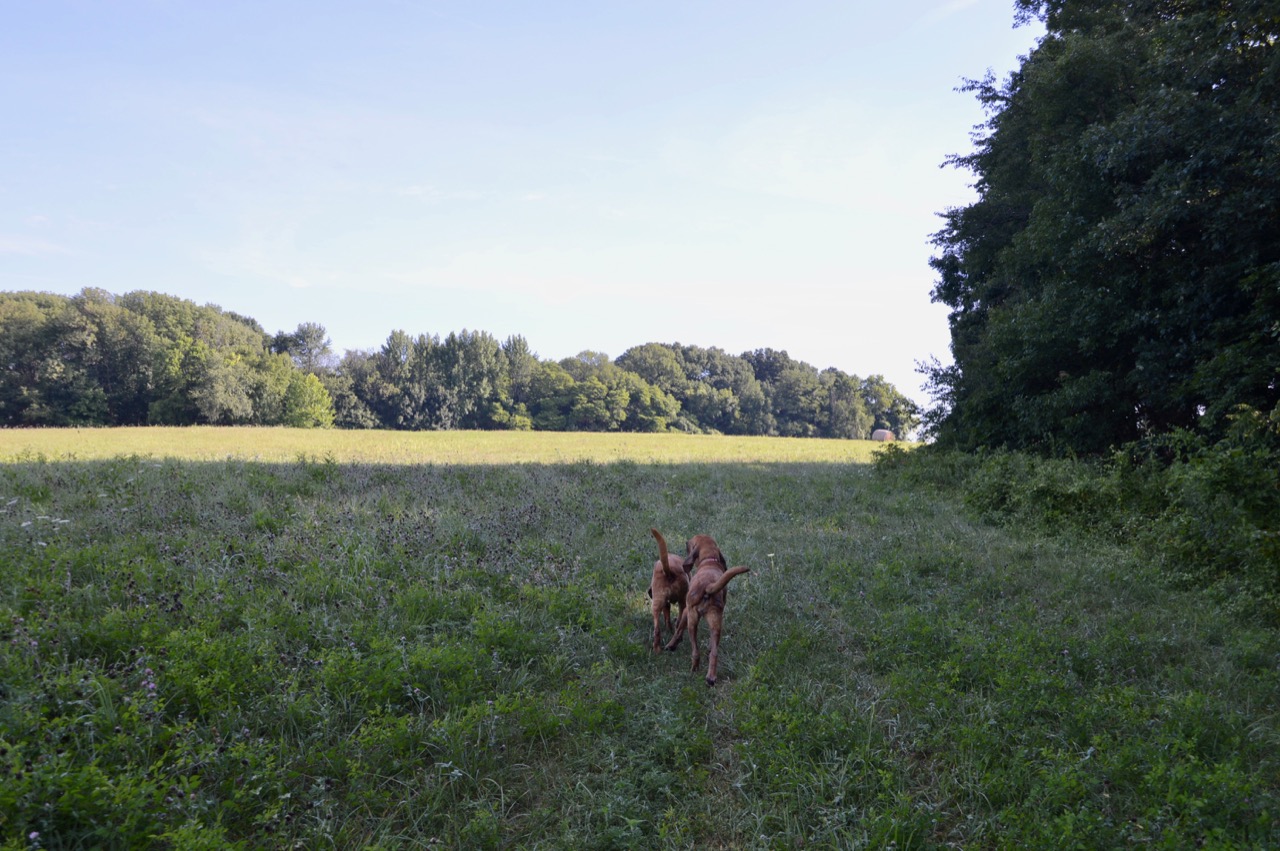 I knew as soon as the morning walk was over I was going to get on the roof to check the gutters since I had some rain overflowing the side of the front gutter. The downspout was plugged with wet leaves on each side of the house so that was an easy fix. I also like to inspect the roof at times since my shingles are getting near their shelf life. I think they can make a couple of more years before I need to have a new roof put on. 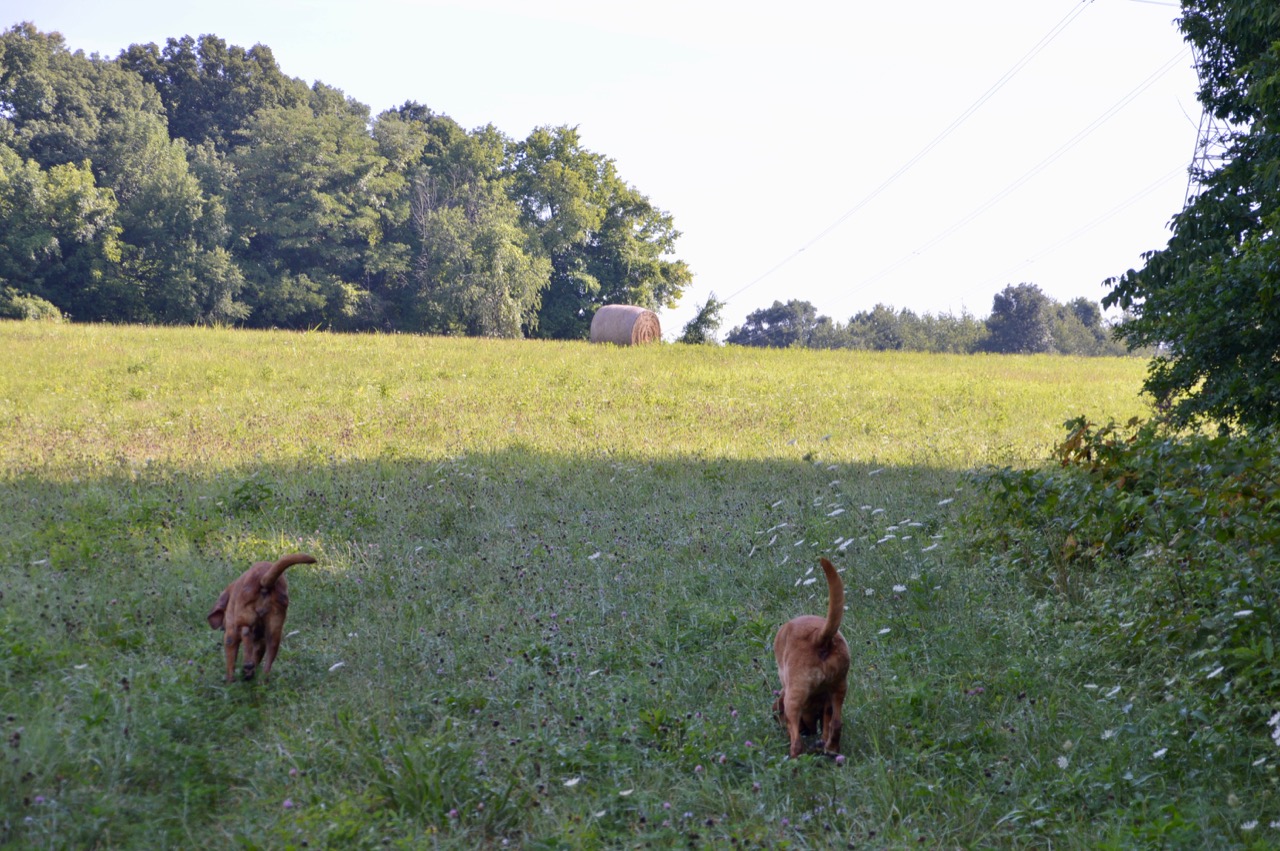 From the way it looks, from 9am to 1pm looks to be a great time to finally get some things marked off on my 'to do' list. If the weather continues to be as good as it has been and as good as predicted I might get everything finished on that 'to do' list before my first college football game on September 1st. My world basically stops once college football starts and will start spinning again normally after the Final 4 game in college basketball next April. So things have to get done between April 7th an September 1st every year. 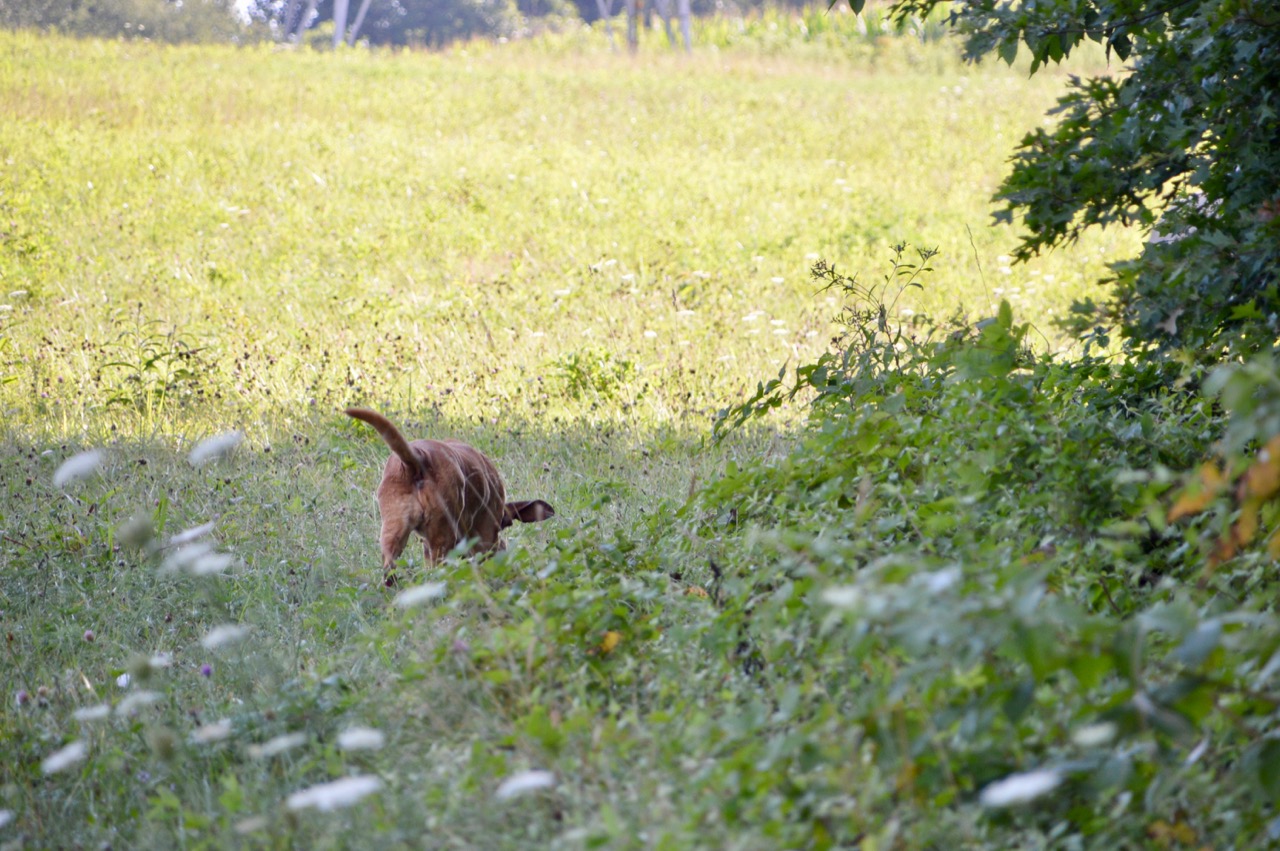 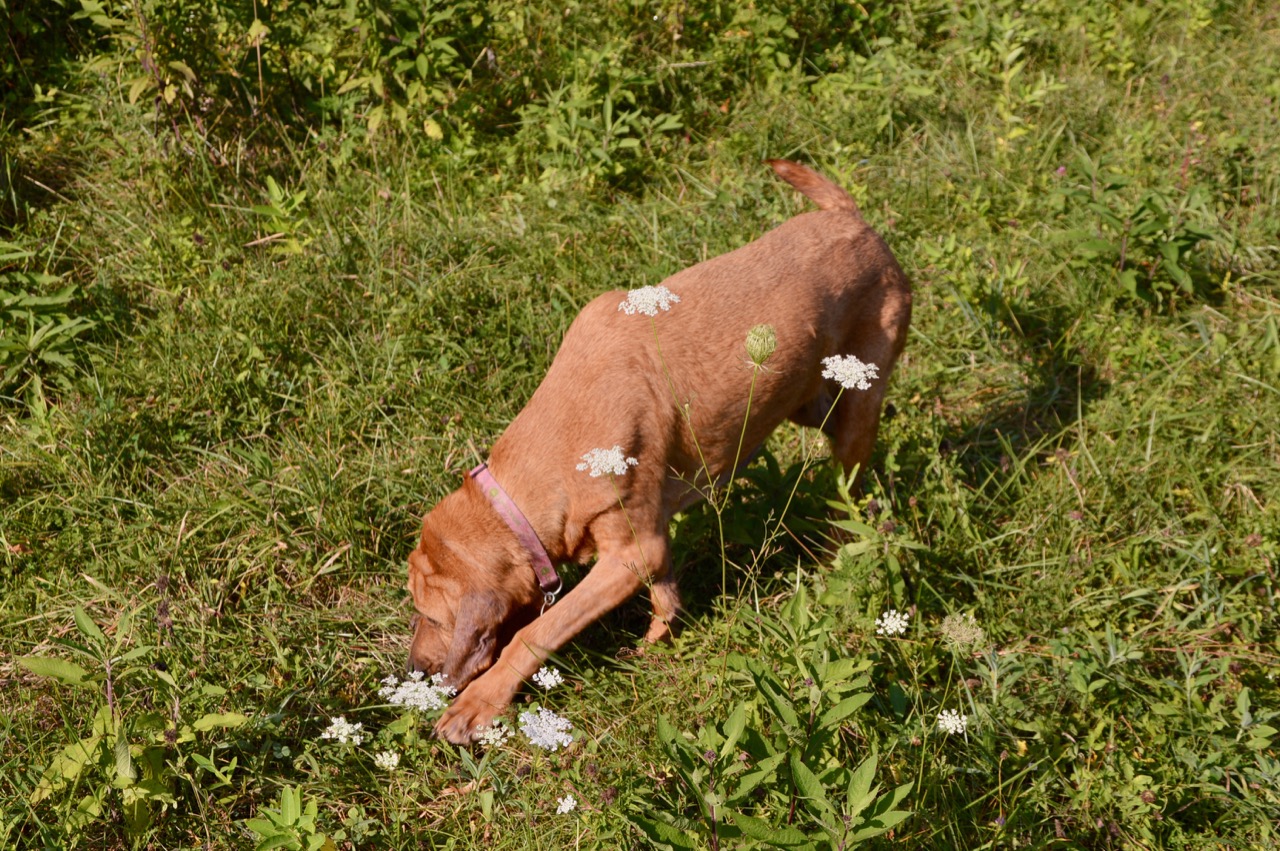 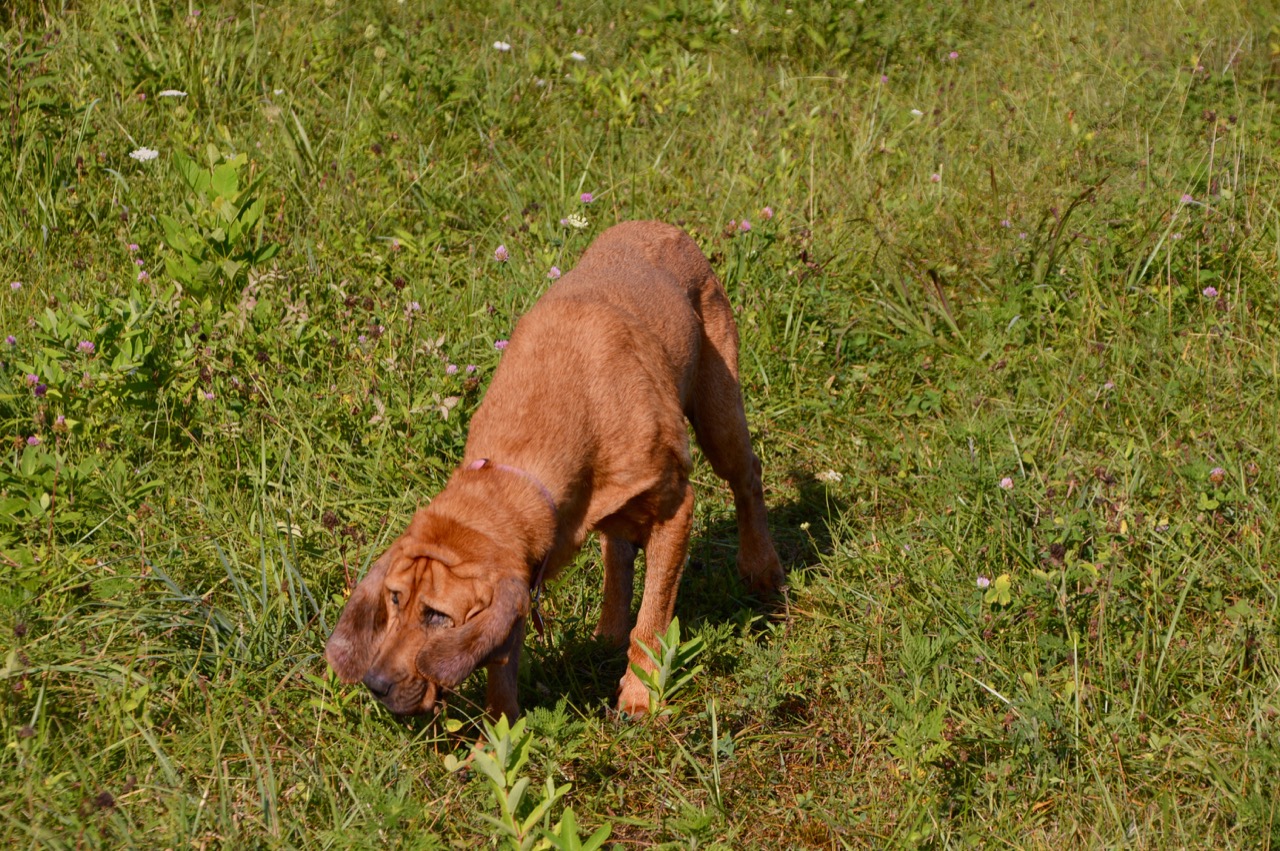 Stella was pretty active this morning with her nose. She didn't run anywhere nor trot but a few spots during the walk grabbed her attention. Of course verbal herding was needed to get her to move to get Sadie and I back to the house. 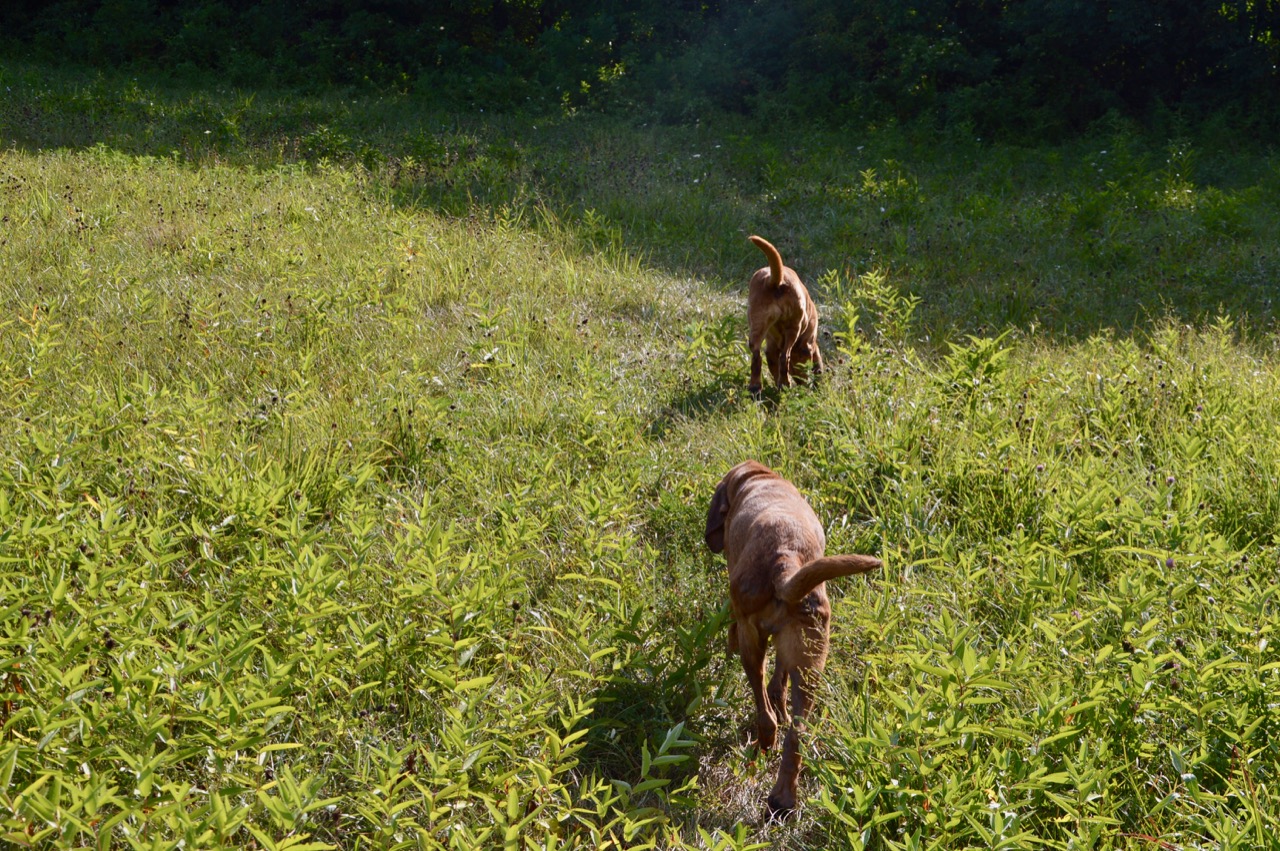 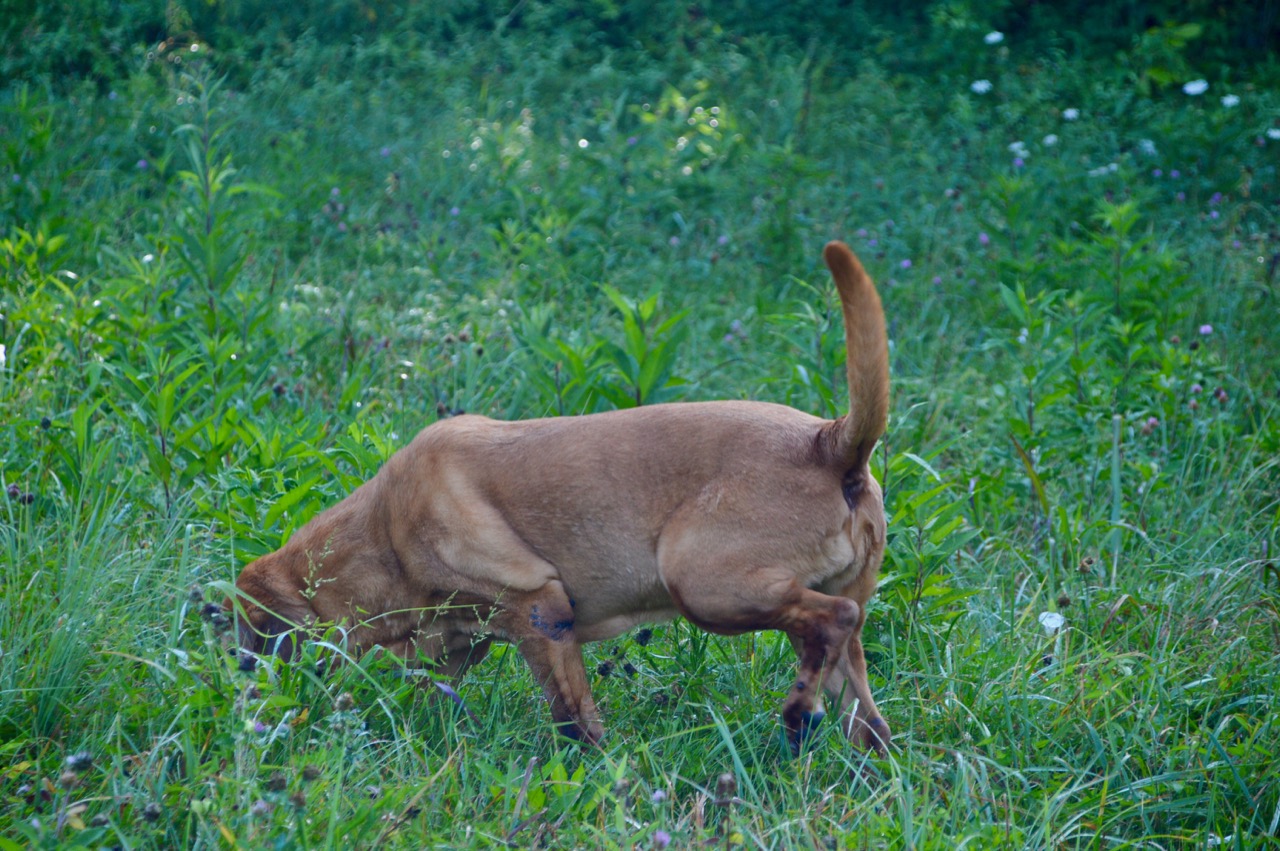 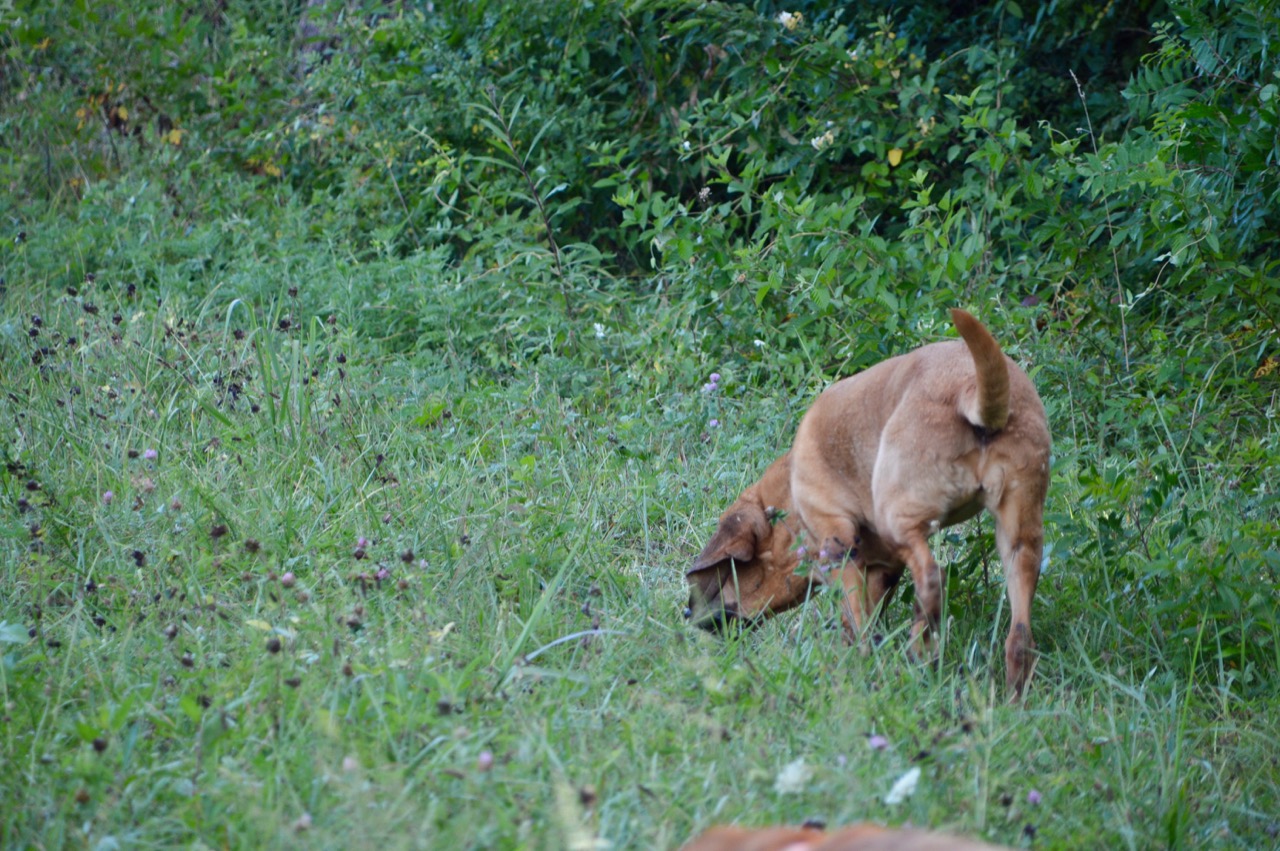 Sadie was of course herself just like every walk she takes. A million scents to check out and only one nose within our half mile walk. 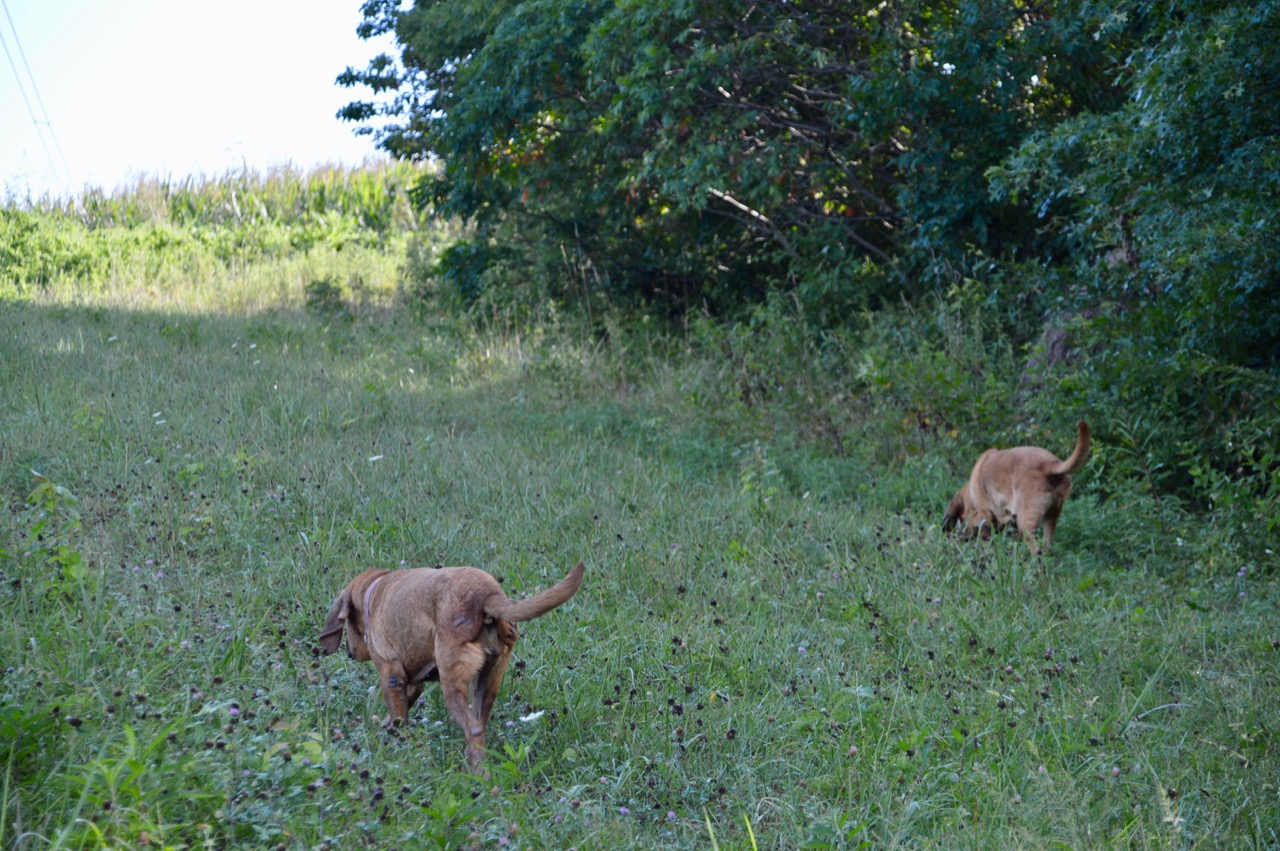 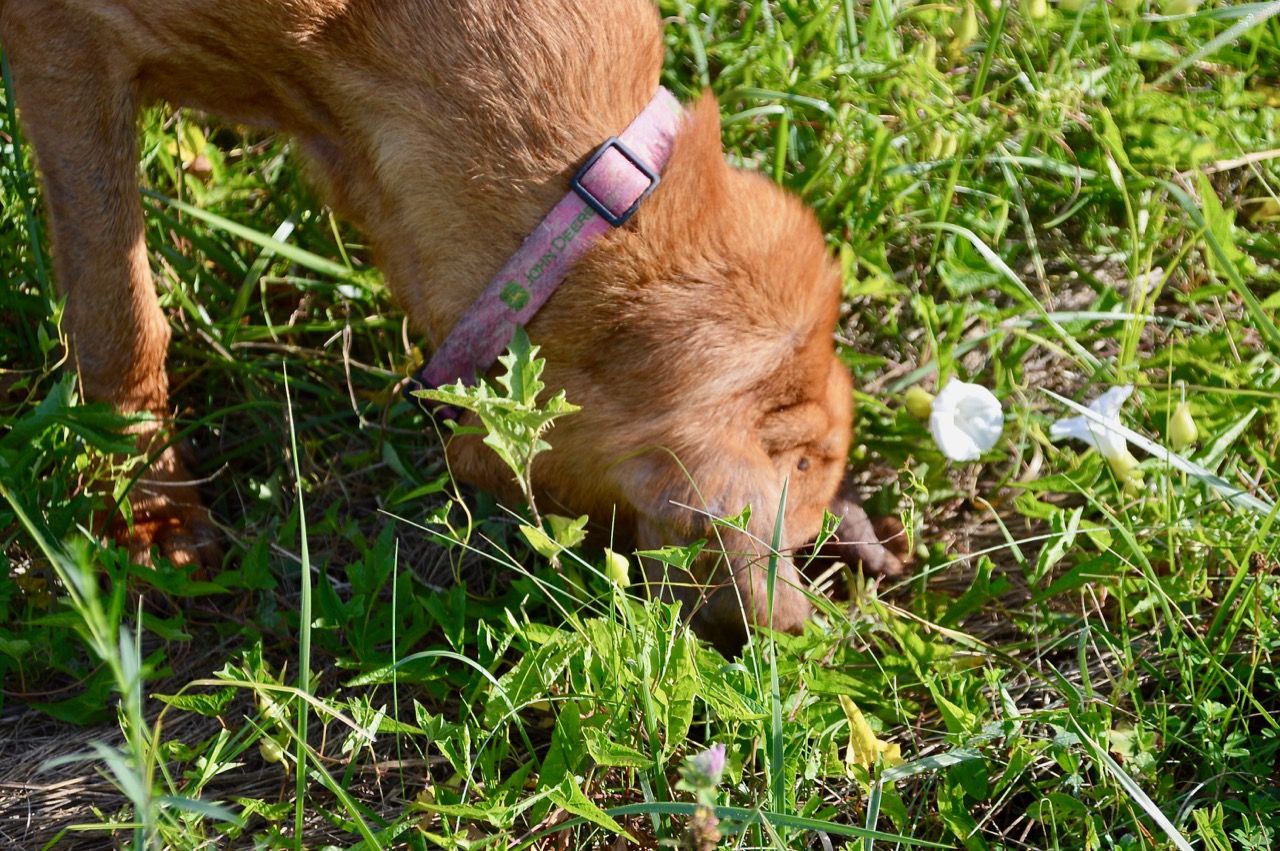 Stella was positive there was something she just had to eat buried under a clump of mowed hay (June) and possibly at dirt level. She pawed at the spot first then moved her nose to get as deep as possible. I am not sure what it was because I saw nothing below her nose on the ground and when she raised her head she had nothing in her mouth. 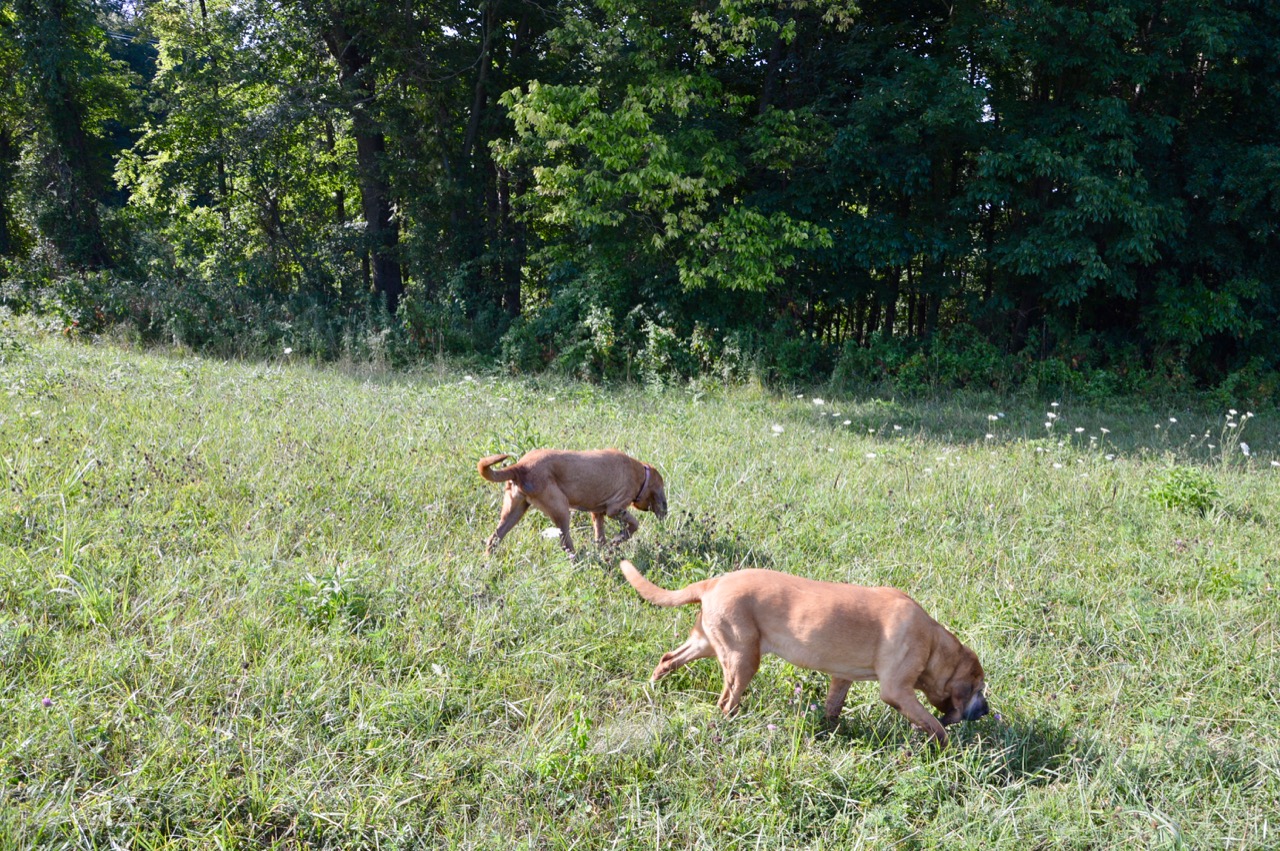 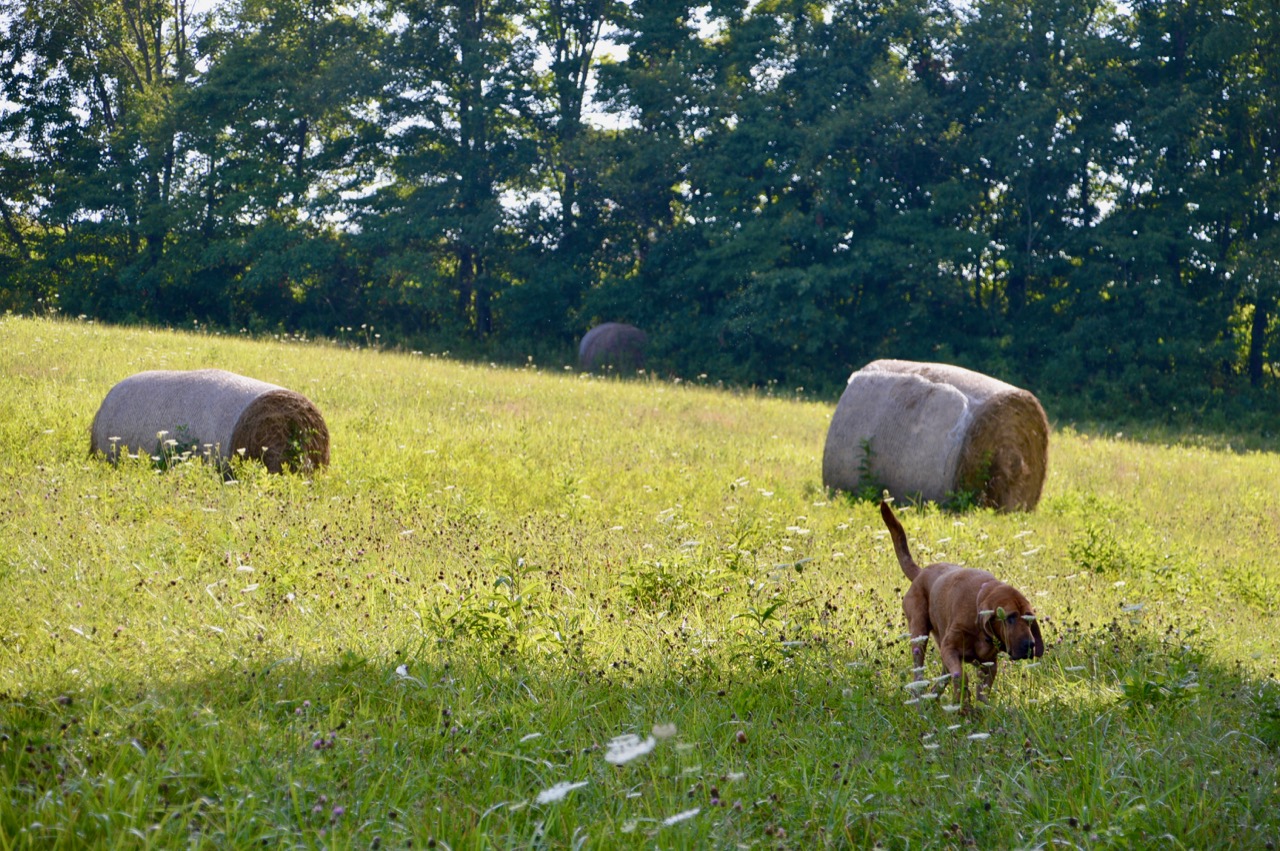 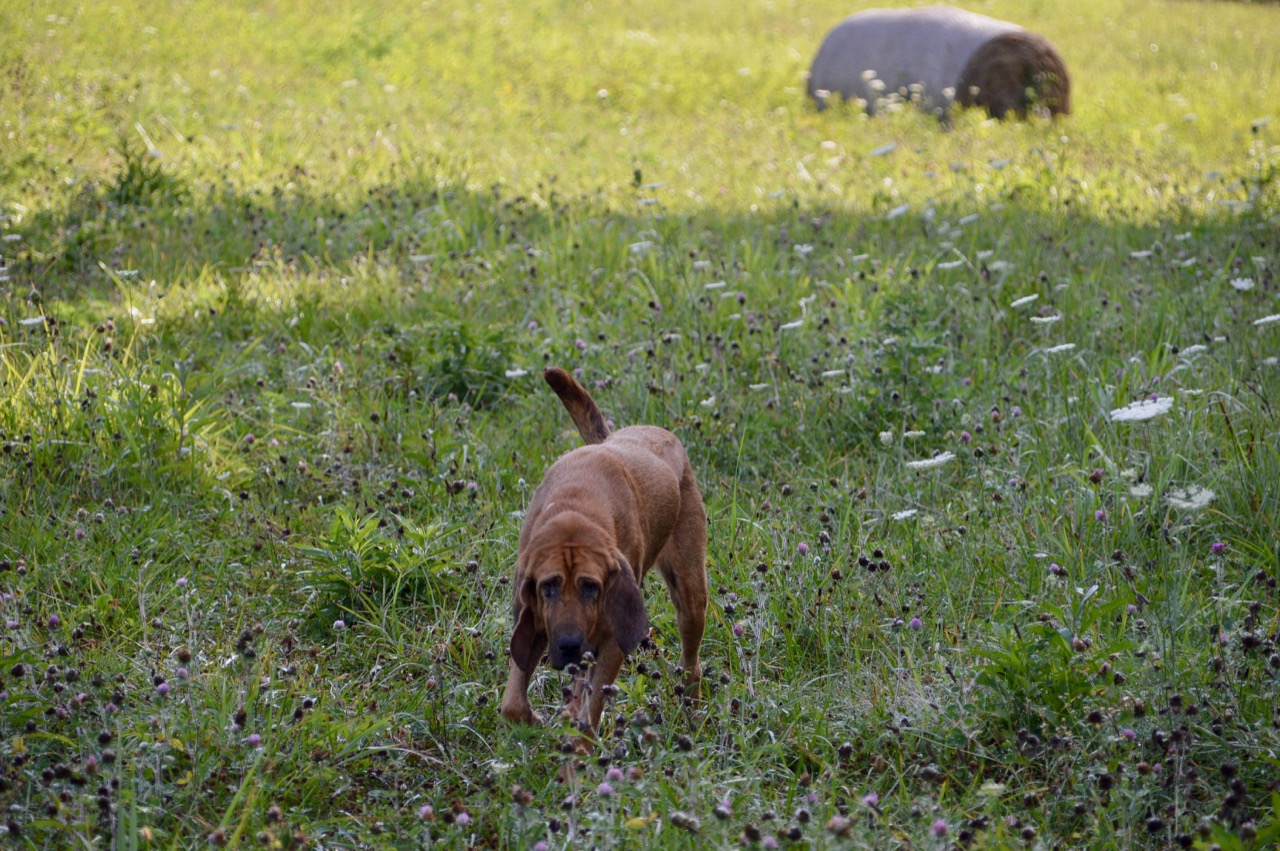 Getting back to those weeds in the flowerbed. I never sprayed them with the weed killer I had because I had planned to always pull them out by the roots. With the base of cedar mulch and the black landscaping ground cover below the mulch ... pulling all the weeds out was pretty easy. I have changed to watering the Azaleas and the other flowers I planted last year (can't remember their names) in the mornings now instead of late afternoon/early evening. They are so far under the overhang they don't get a lot of the rain water when it rains. 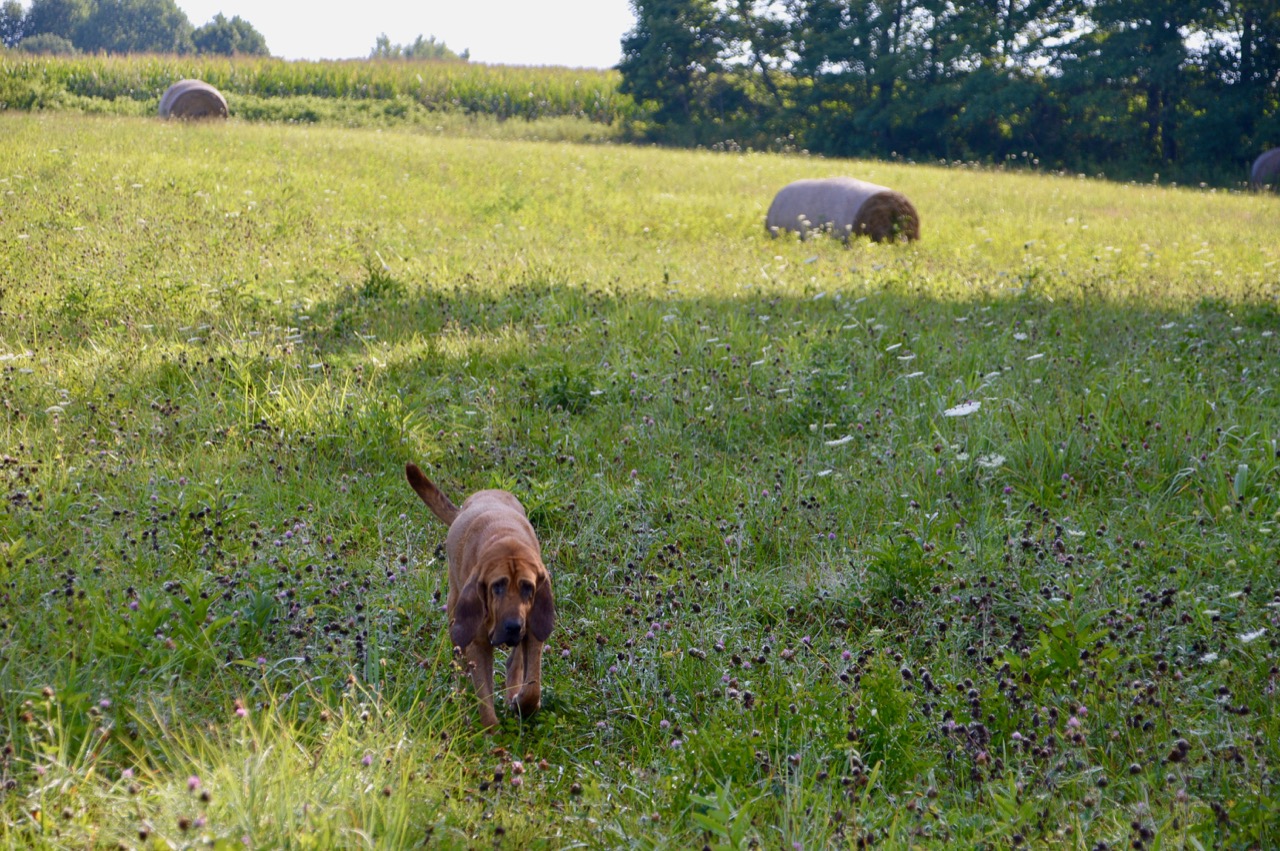 As you can tell, Stella was in no hurry this morning. The temperature was cool, in the 60's, so she was going to take her time getting back to the house. 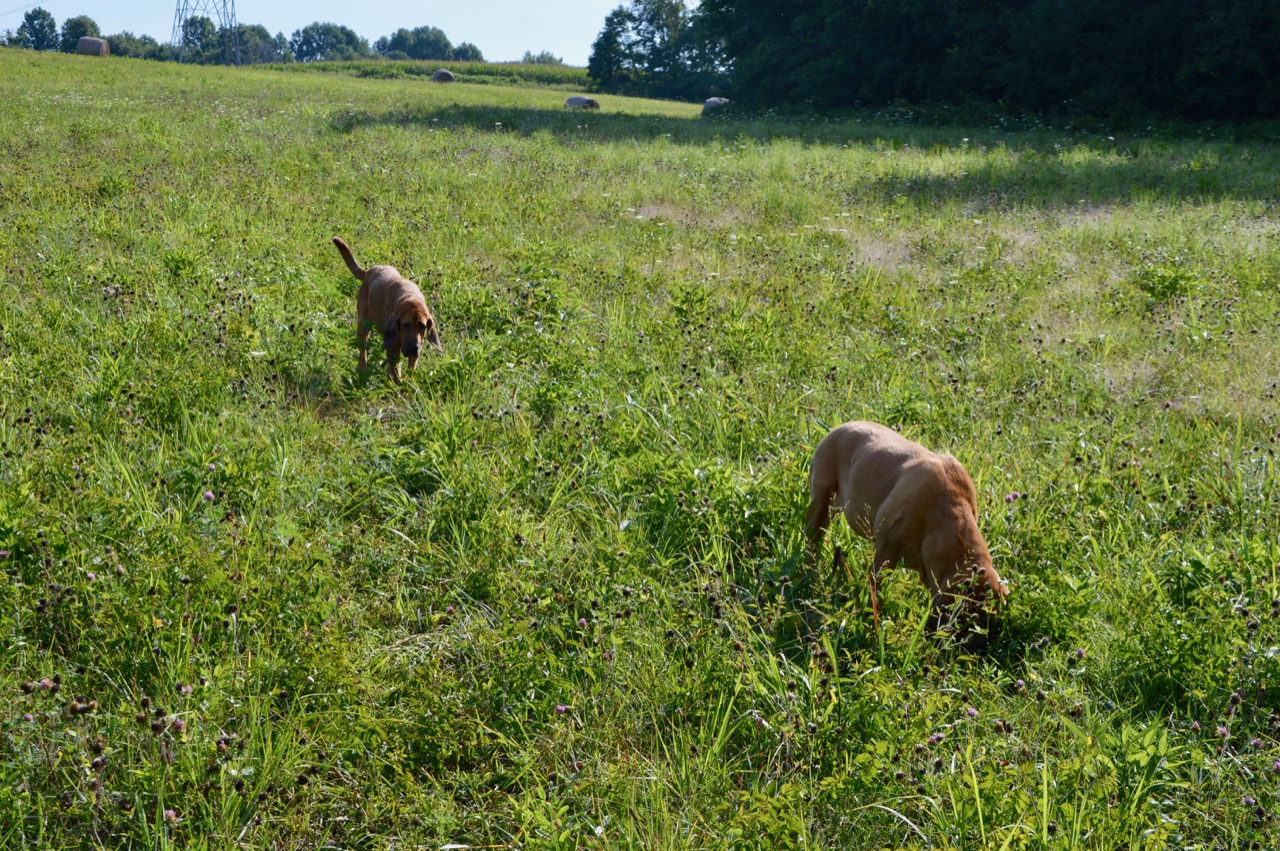 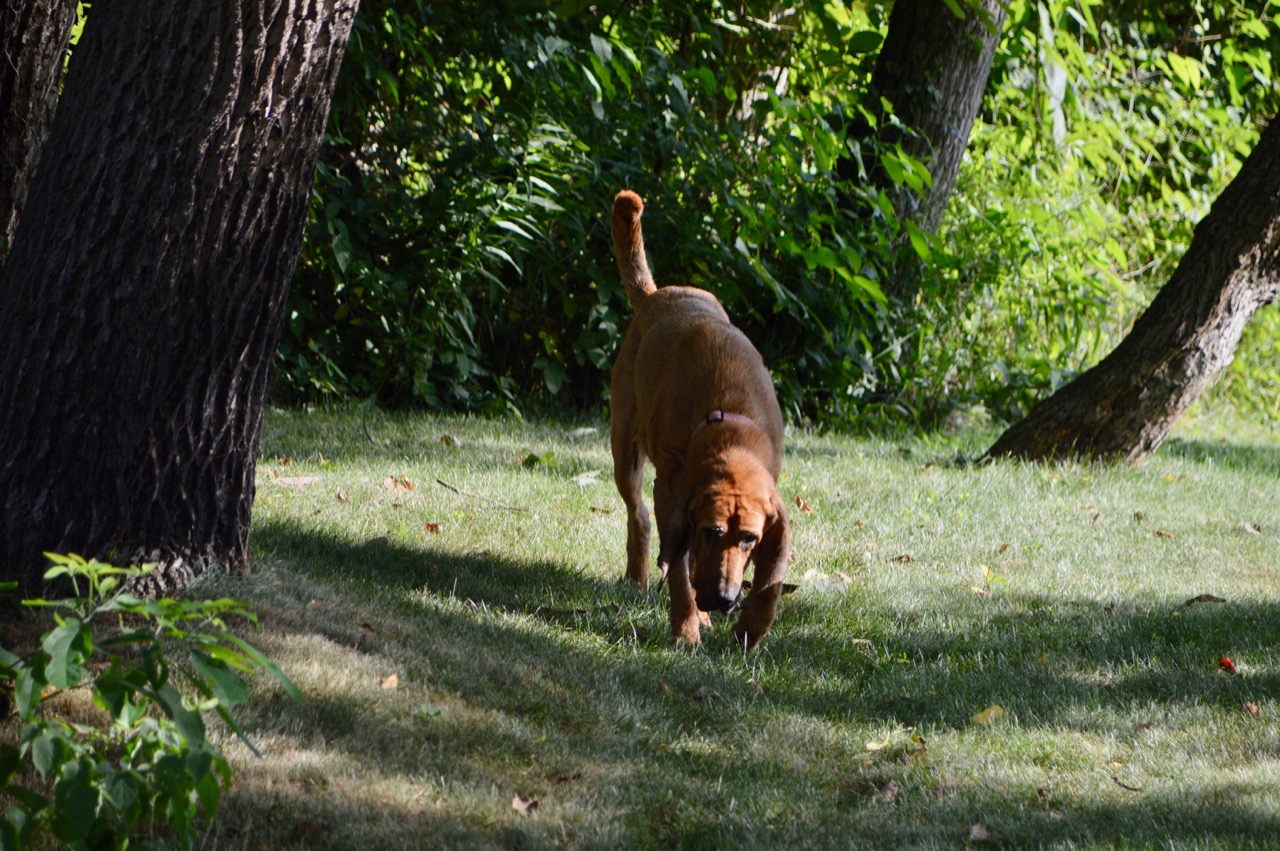 By late afternoon I had watched the last real race of the Tour de France that was taped early this morning. Tomorrow is the last day but is more of a ceremonial trip in Paris. Then I took the Z4 out for about an hour drive through the hills and curves on the highways in my local area. I have a lot of different routes I can pick from and a couple are fantastic sports car roads. The car ran as smooth as it ever has. Not bad for 15 years old car.

Early game tonight in Cincinnati, so it might be another night of getting to bed early, at least for me. I am thinking that tomorrow morning after the hound walk, I will finish a job I started in May 2017 but didn't finish due to hot weather last summer, then college football season on tv, the the frozen winter ... that is scraping the trim where needed all around the house, apply primer after that and then paint the trim color on Monday morning. Most of that work will be inside the carport.

The days continue to be fantastic weather for this time of year in 'the tropics' of Southern Indiana.
at July 28, 2018
Email ThisBlogThis!Share to TwitterShare to FacebookShare to Pinterest
Labels: 2003 BMW Z4 3.0i, Bloodhounds Supervise, Busy Saturday Morning, Roof Inspection, Z4 Drive