The Hounds Have A Late Start 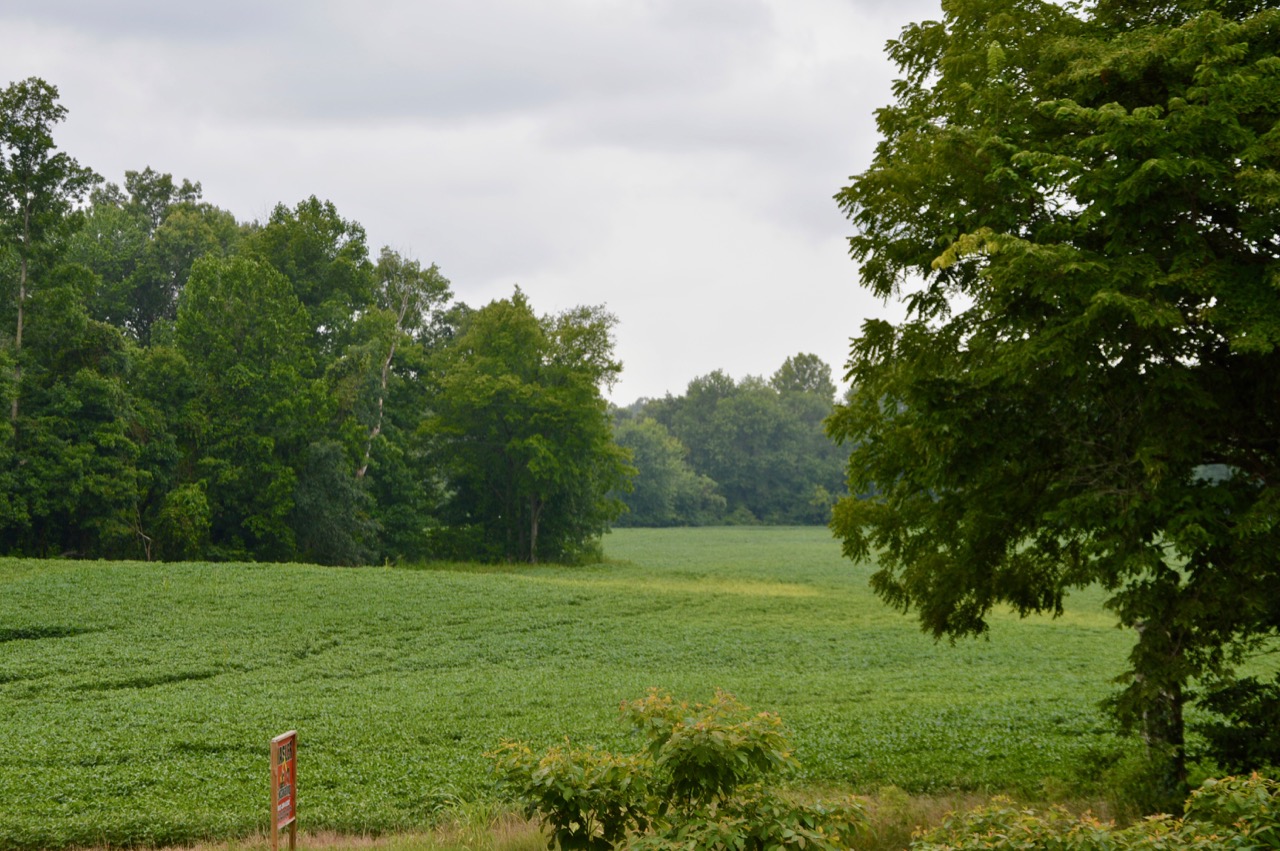 The rains that were in the forecast for this weekend finally arrived. It sounded like a good excuse to catch up on some sleep but they arrived late and were very light. The reason the hounds started their day late is because the hounds let their slave sleep in this morning. Those times the past couple of weeks where I was up until 2am - 3am finally caught up with me. That didn't mean the hounds had a late breakfast ... kibble was still served at 7:30am. 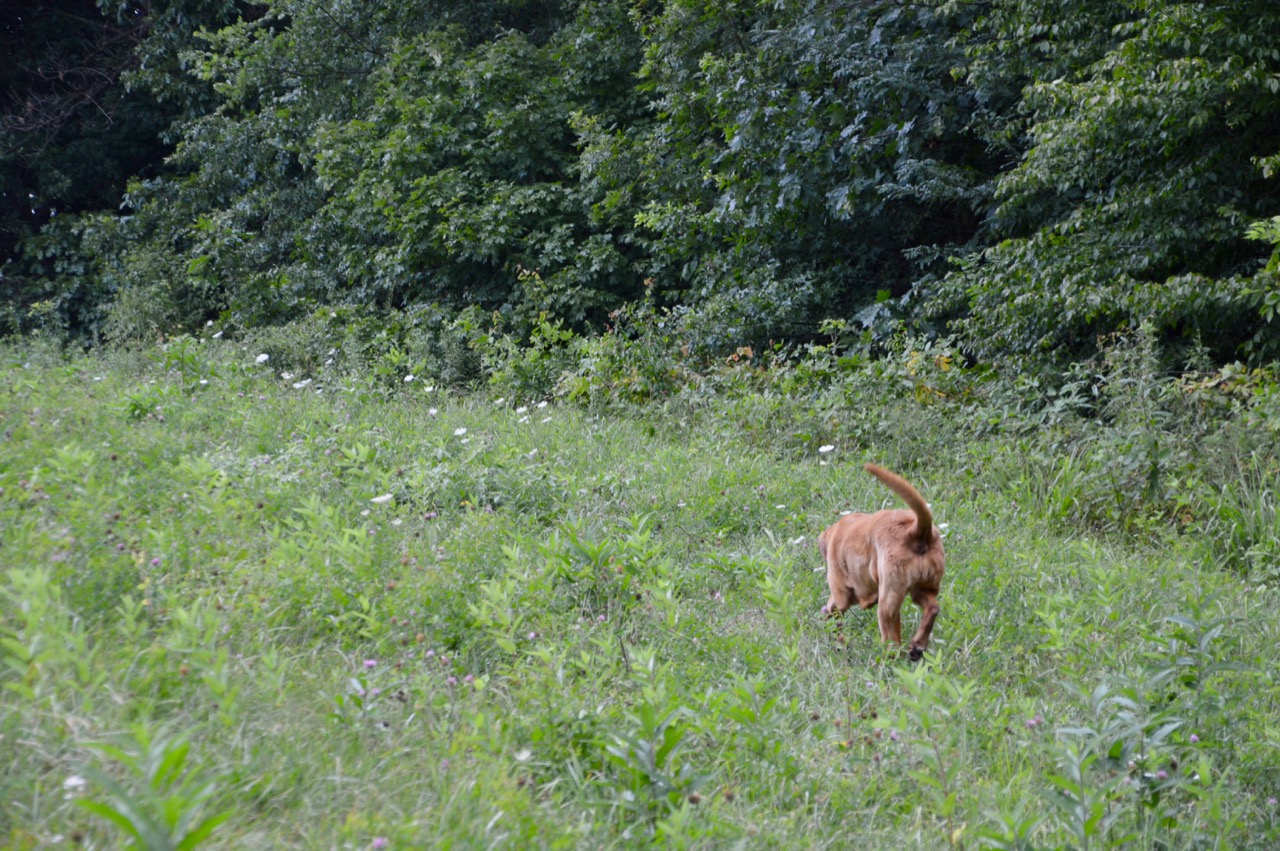 With a piece of cold pizza in my system by 12:30pm and the other two pieces in the oven warming up, Sadie was going to have to wait for her first walk. We never do walks soon after their lunch yet the hourly weather forecast was a factor in the plan. First we would watch the Tour de France that is always taped by the DVR, too early in the morning for me to watch. Needless to say that once Sadie was on the walk mid-afternoon ... she took off running ... she was thrilled getting back into the field. 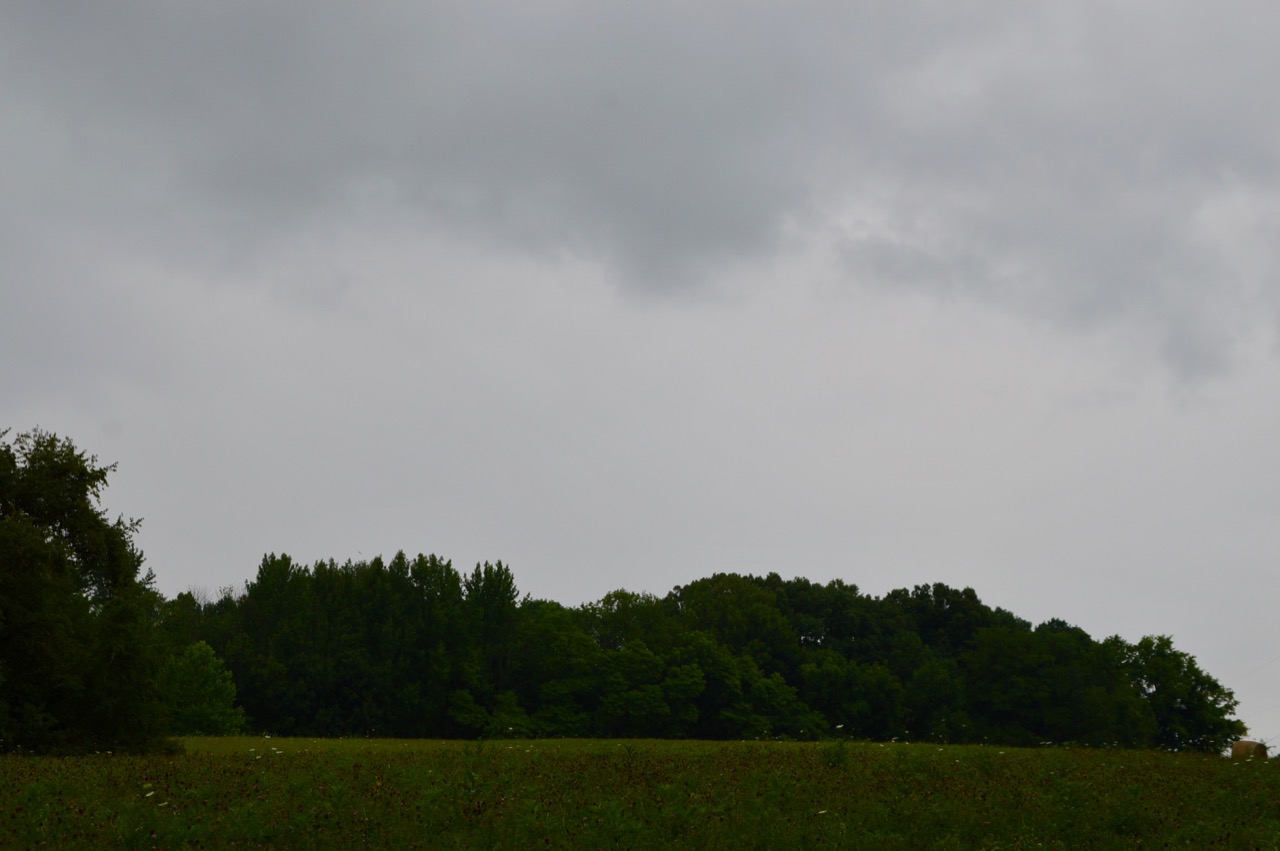 Even though the skies were dark I guessed they would hold off long enough for us to get our short half mile walk in. I only needed around 9 minutes for me. With Stella's pace 15 minutes of no rain would be nice. 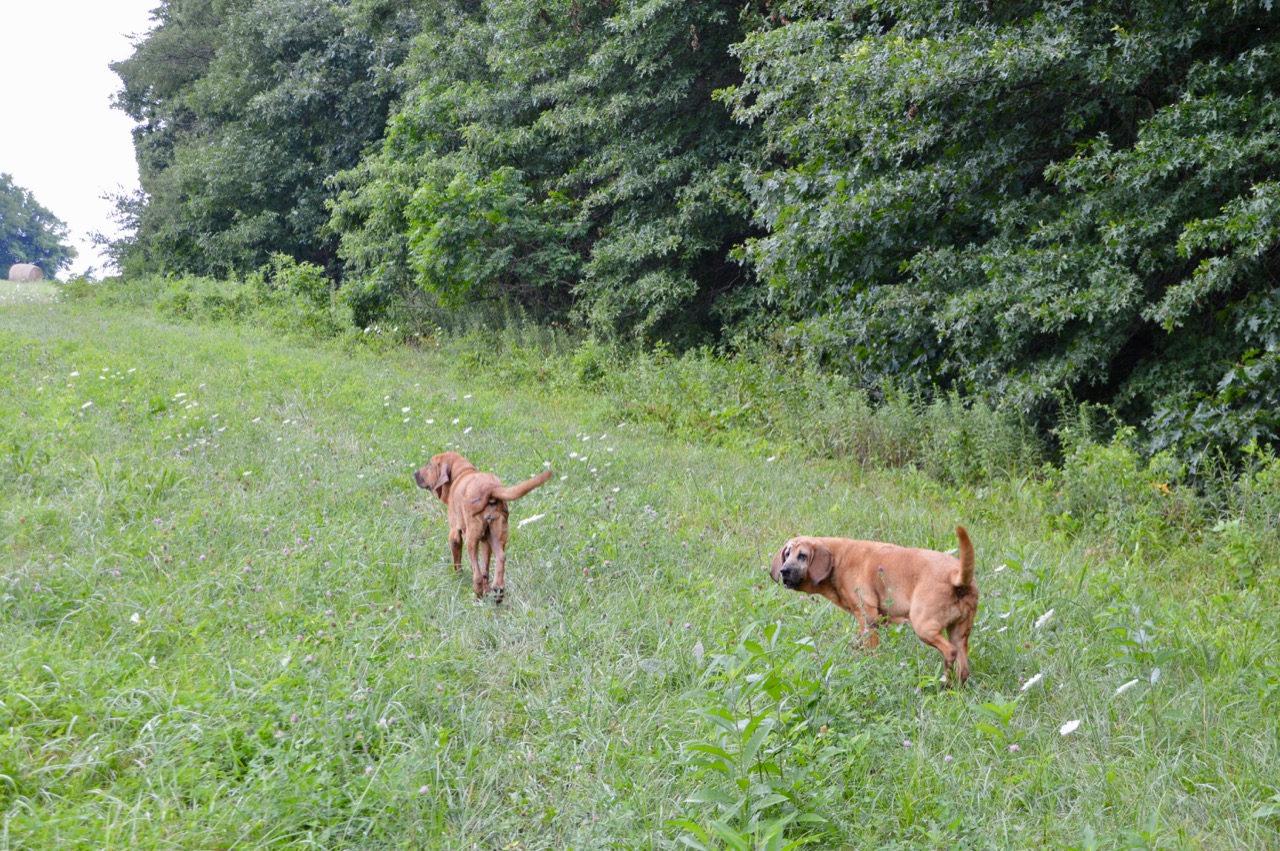 Stella took the lead in her normal slow pace. Rain was not a factor in her planning ... never is. 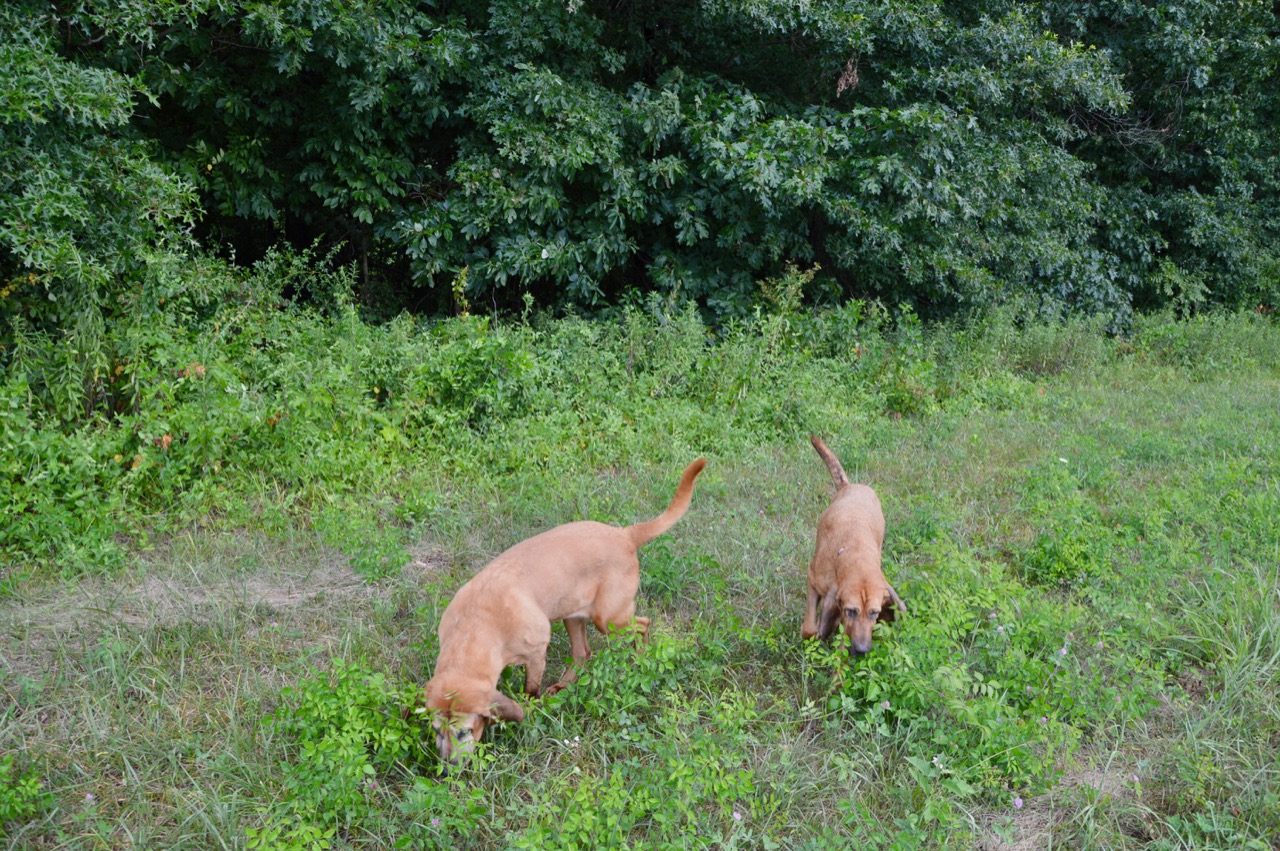 Last night with a three hour rain delay in the Reds game, the first pitch wasn't until 10:10pm. I justified starting to watch it to the finish by telling myself it was just like a west coast game when they play in San Diego, Los Angeles or San Francisco. With a steady rain during the game I wasn't sure it would finish and I'd still get to bed at a reasonable hour. I assumed wrong. 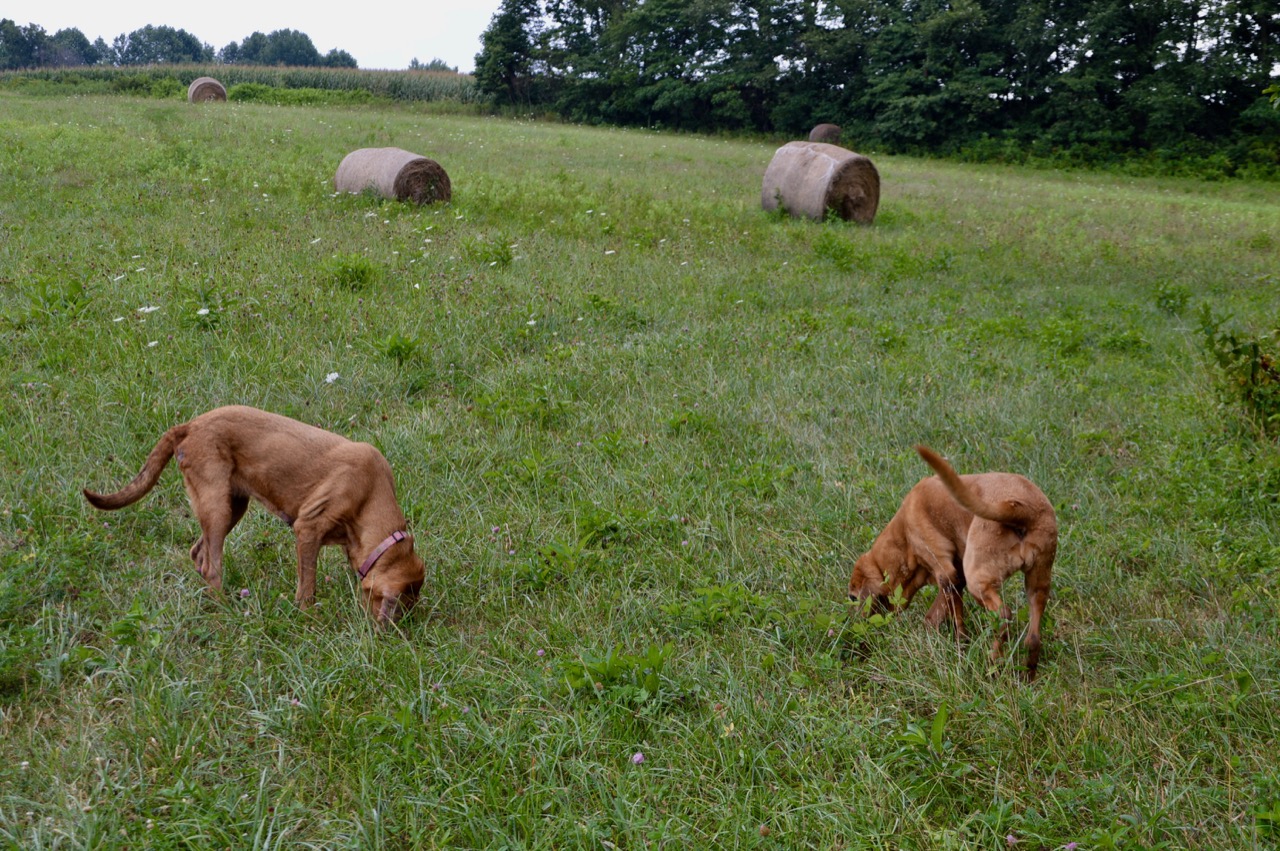 I guess due to the high chance of rain today and for their game tonight, they decided to get that Friday night game finished unless they were flooded out. It ended around 1:30am, I was tired and I knew that I would definitely get up to feed the morning kibble but it would be straight back to bed, skipping any coffee. 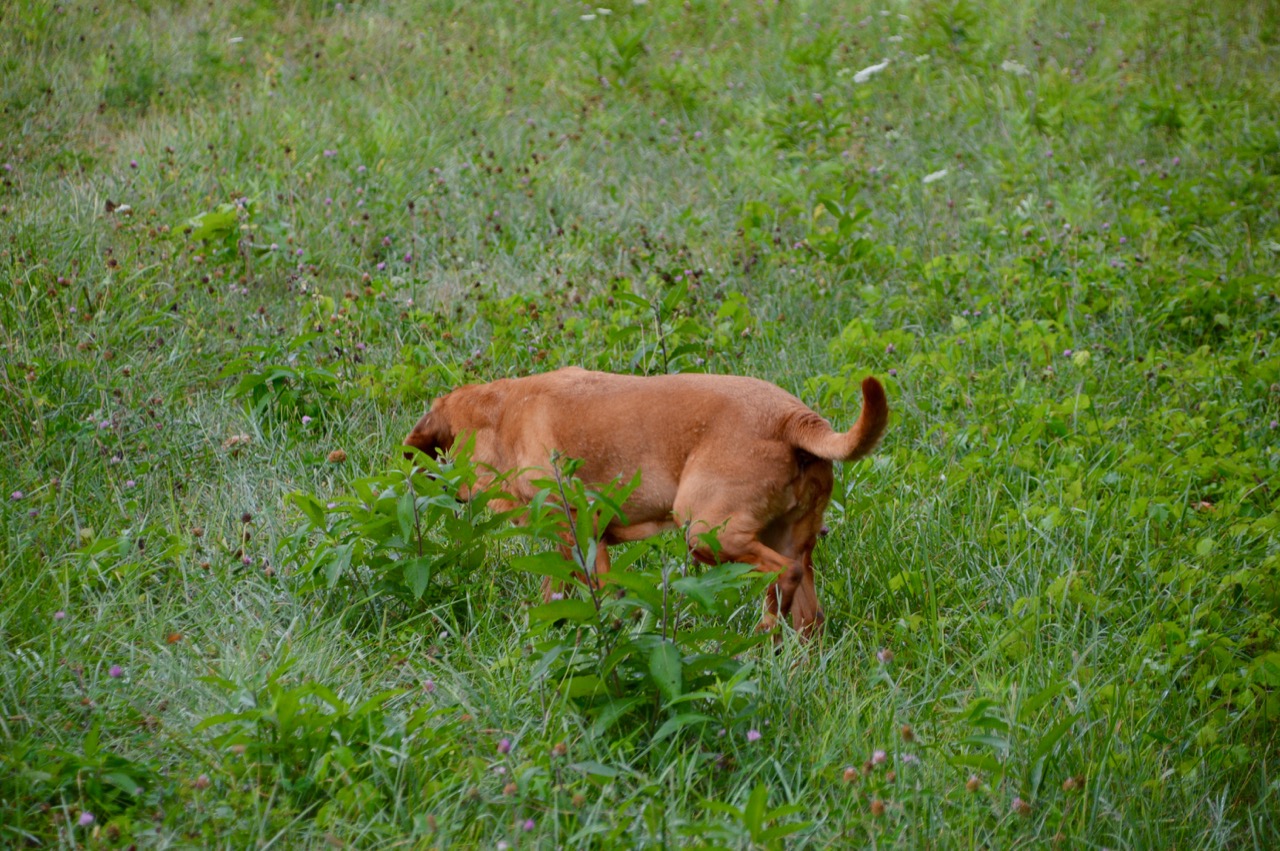 As we rounded the first turn on our walk I felt a couple of drops of rain but decided to charge on. Sadie was in her element as was Stella. I knew that neither hound would want to turn around just because of a few drops of rain. 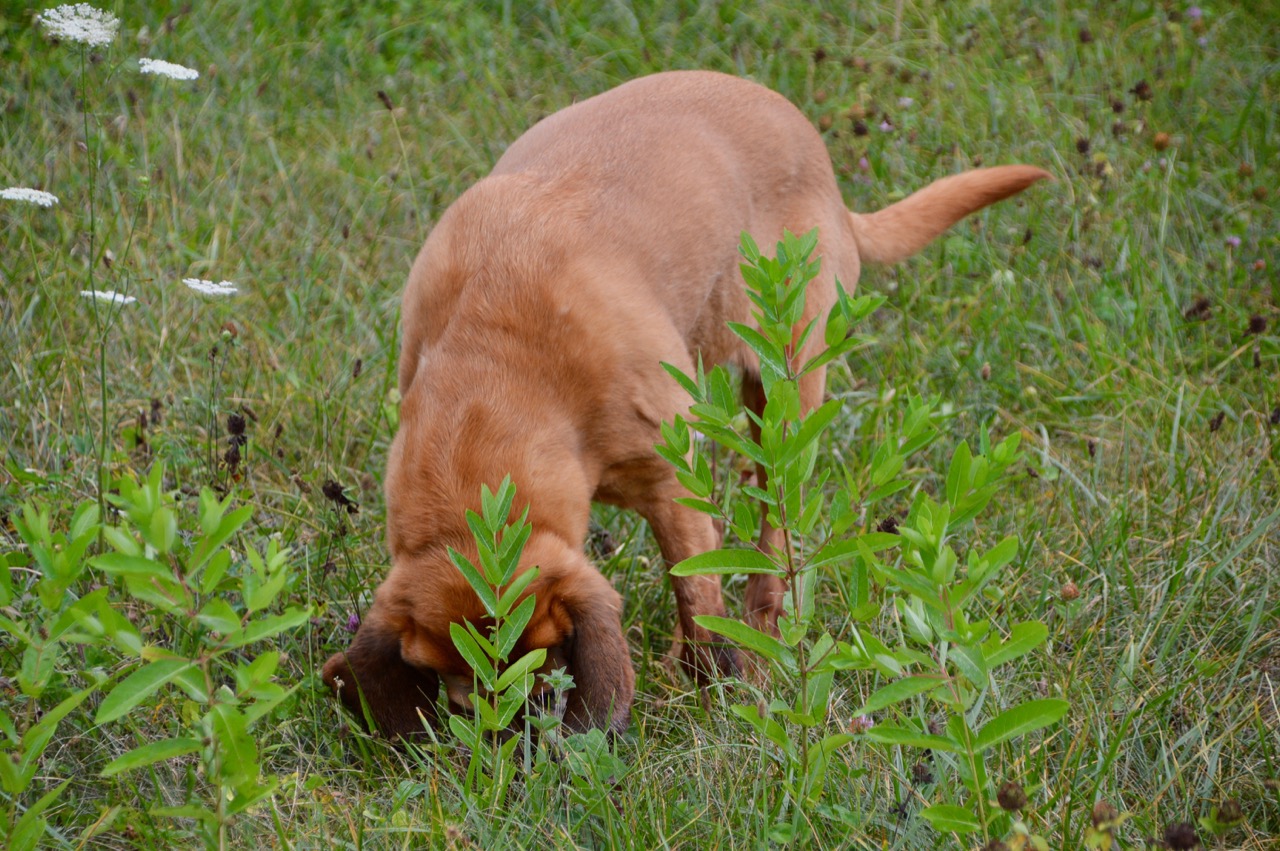 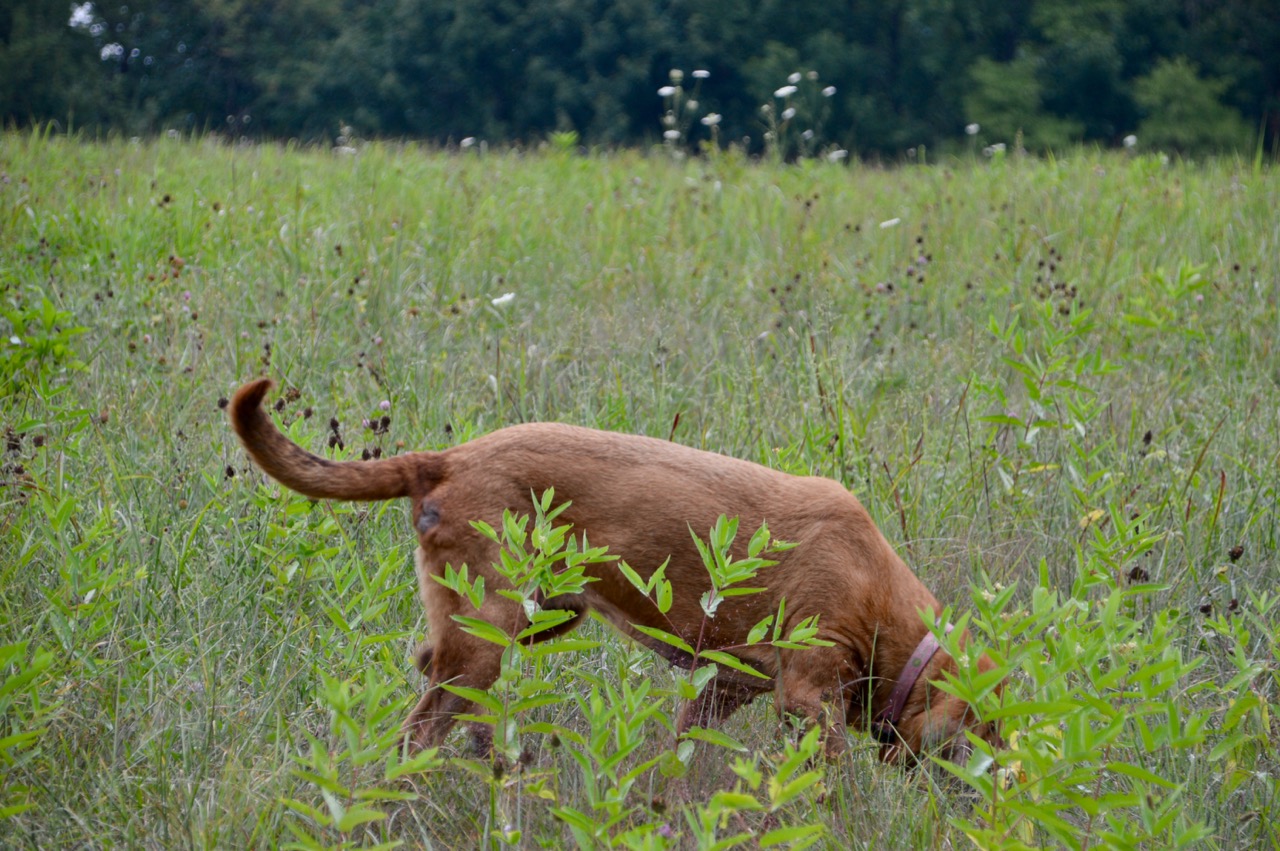 I could tell by the boots I was wearing it had rained earlier in the day. Good for the yard. 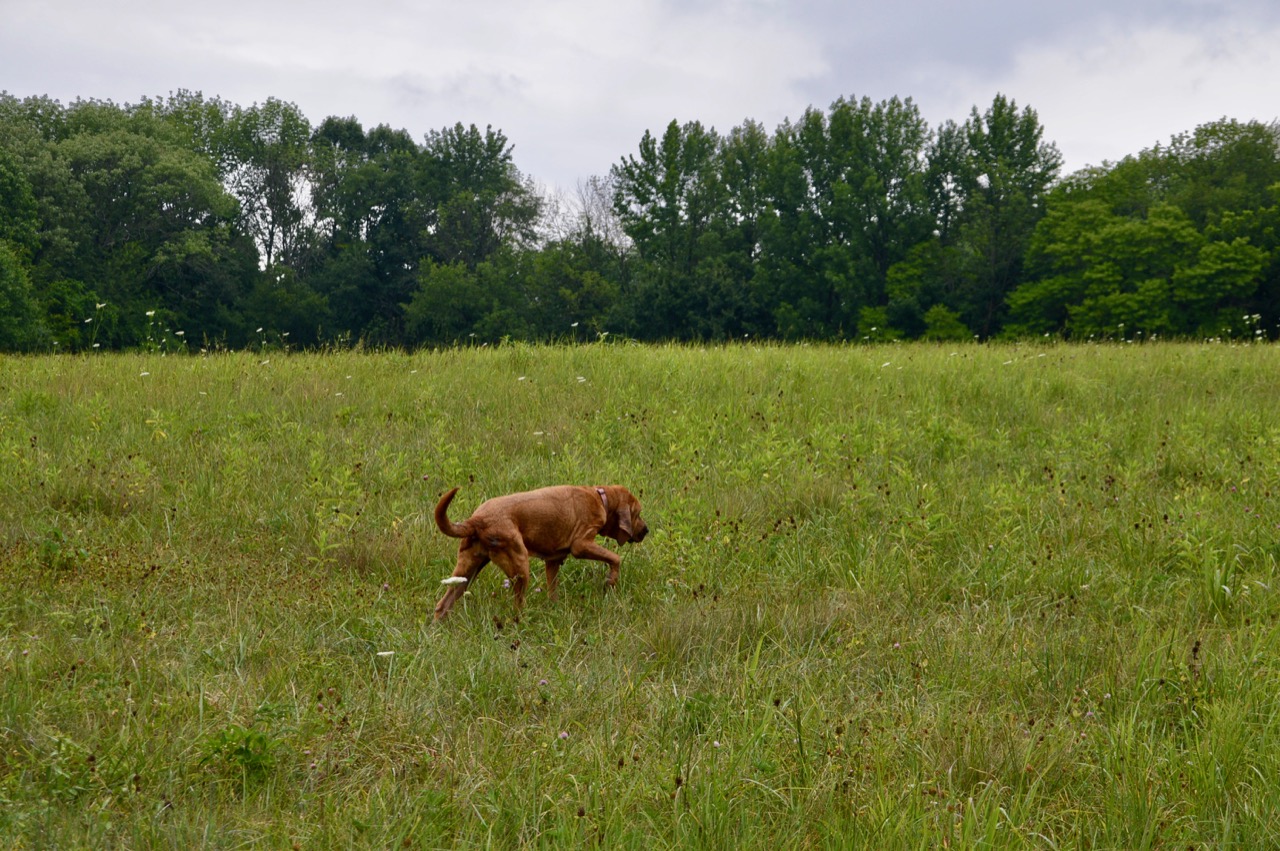 Stella attempted her escape but turned in the direction of the our path when I yelled 'no'. 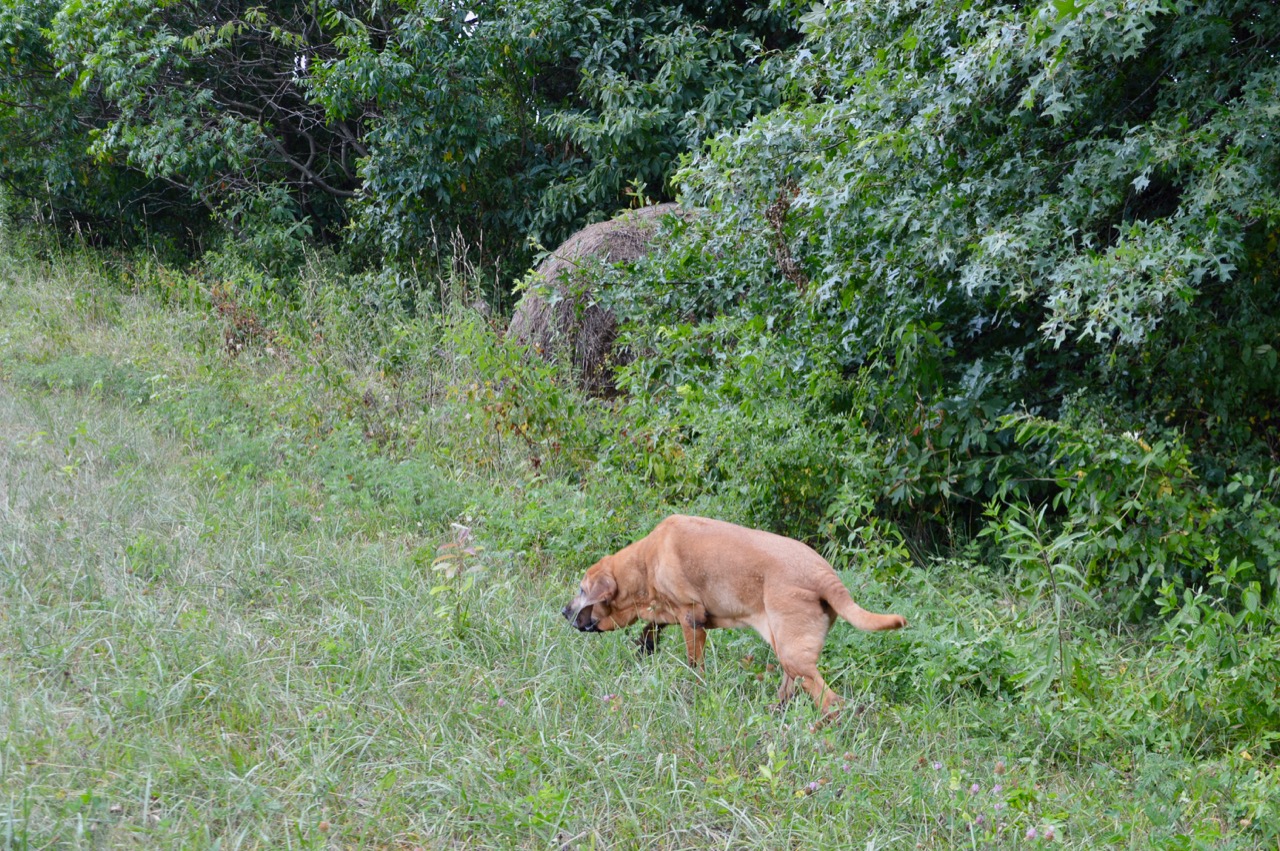 With her out in the middle of the field, Sadie was already trotting along the back edge of the field. She was making up for the missed walk earlier this morning. 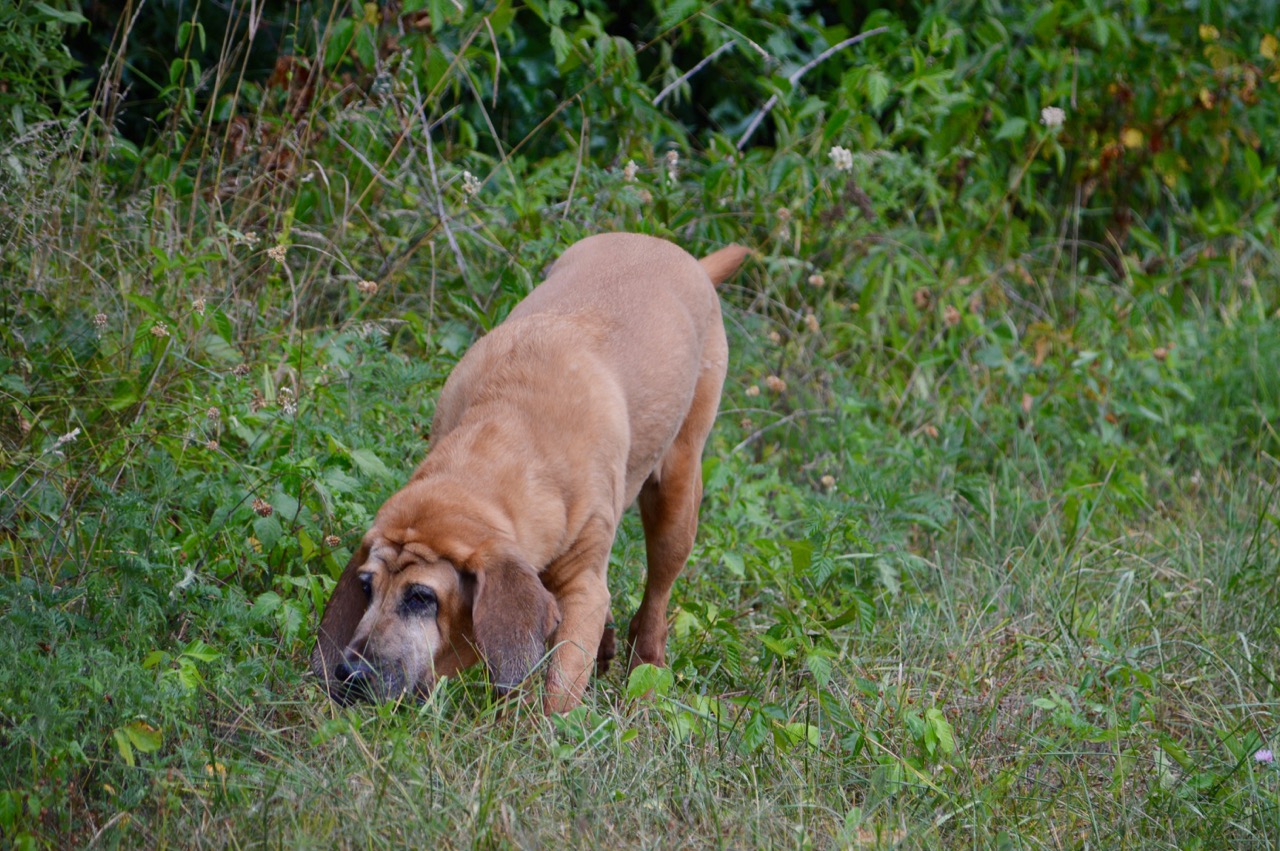 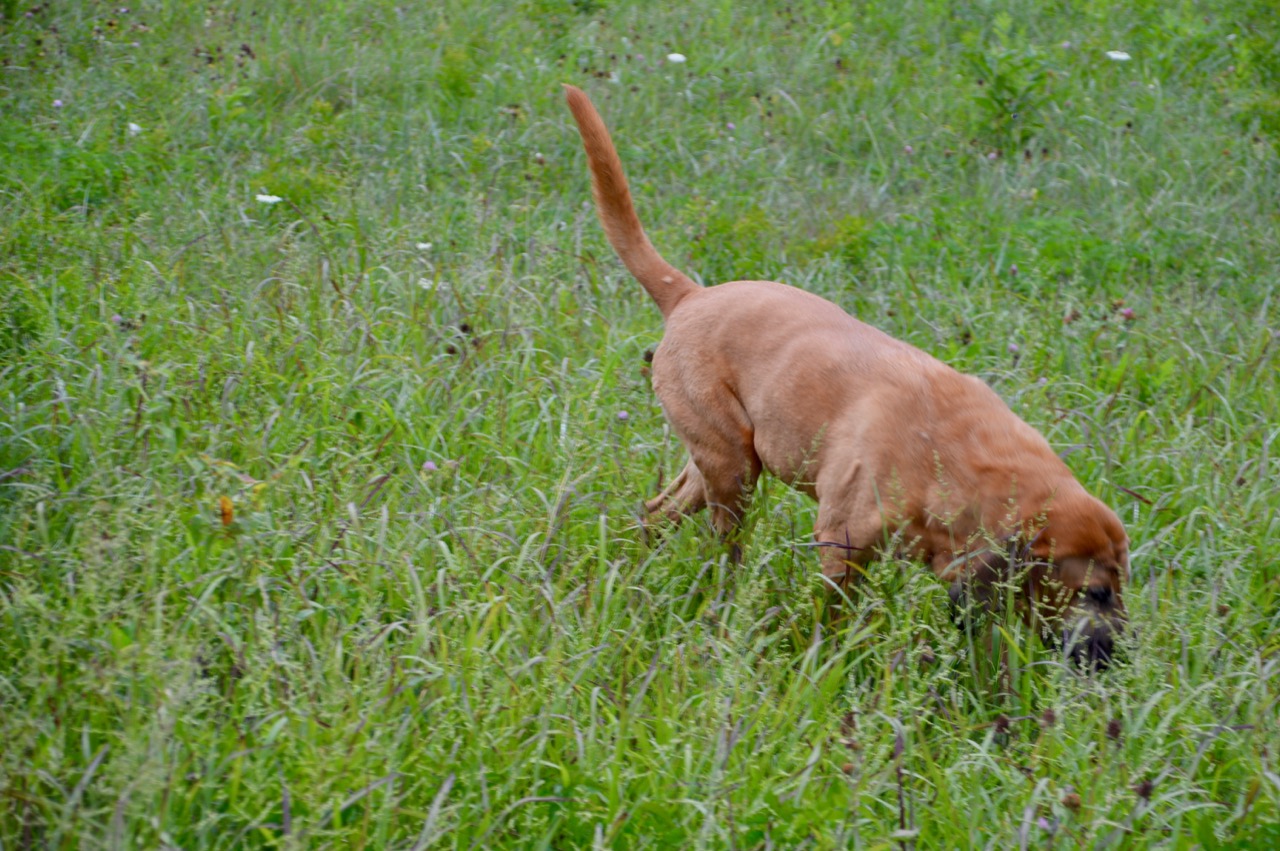 We were not quite to the first corner on our way back when I looked up ahead and it was a background of solid light rain. I told the hounds "lets go" and took off trotting with my camera lens pointing downward. 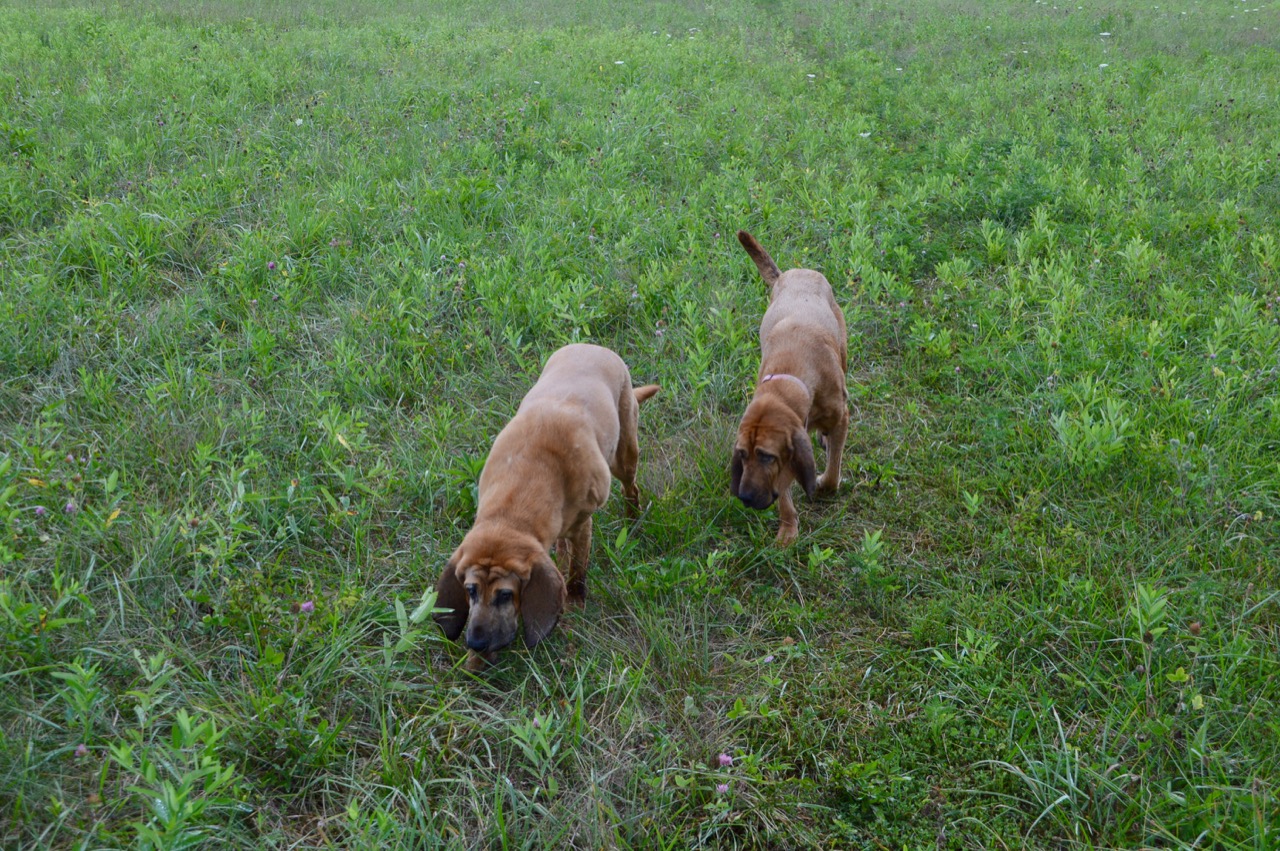 It was raining steady enough I could hear it hitting the bill of my ball cap ... but it didn't matter to the bloodhounds. They are not fans of rain so it shows it wasn't raining hard enough for them to be concerned. 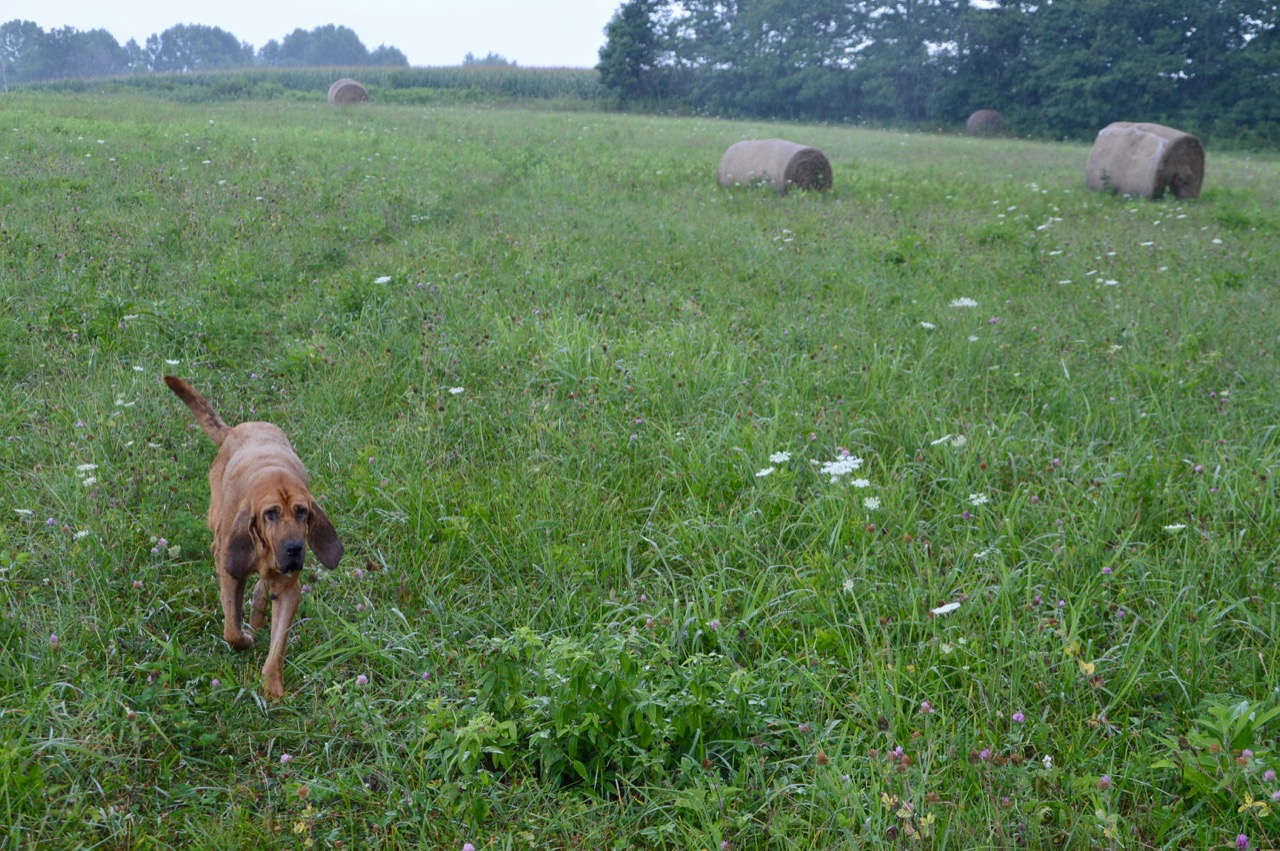 In fact Stella wasn't concerned at all. I was standing under the mahogany trees in the backyard as I took these photos. The rain is coming down harder as I waited for the hounds finish their walk. 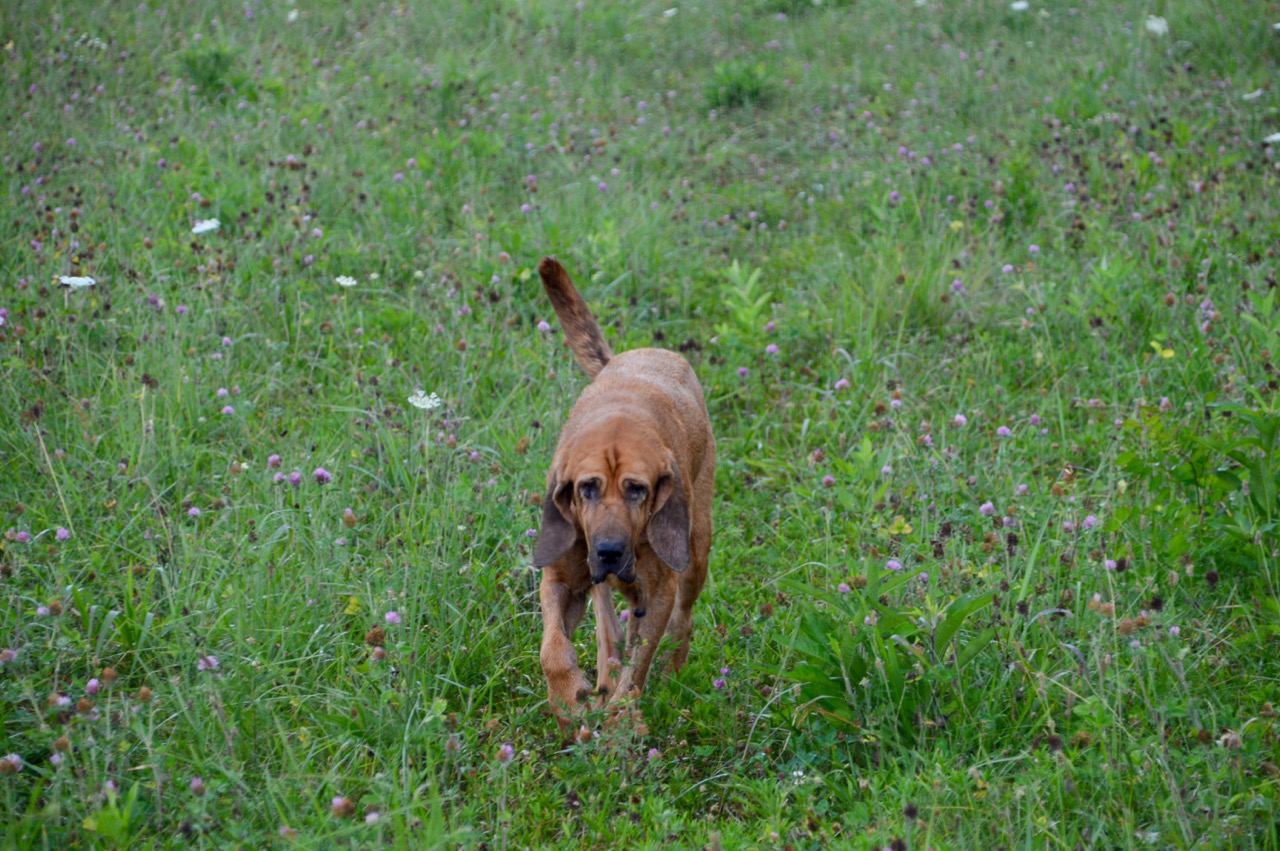 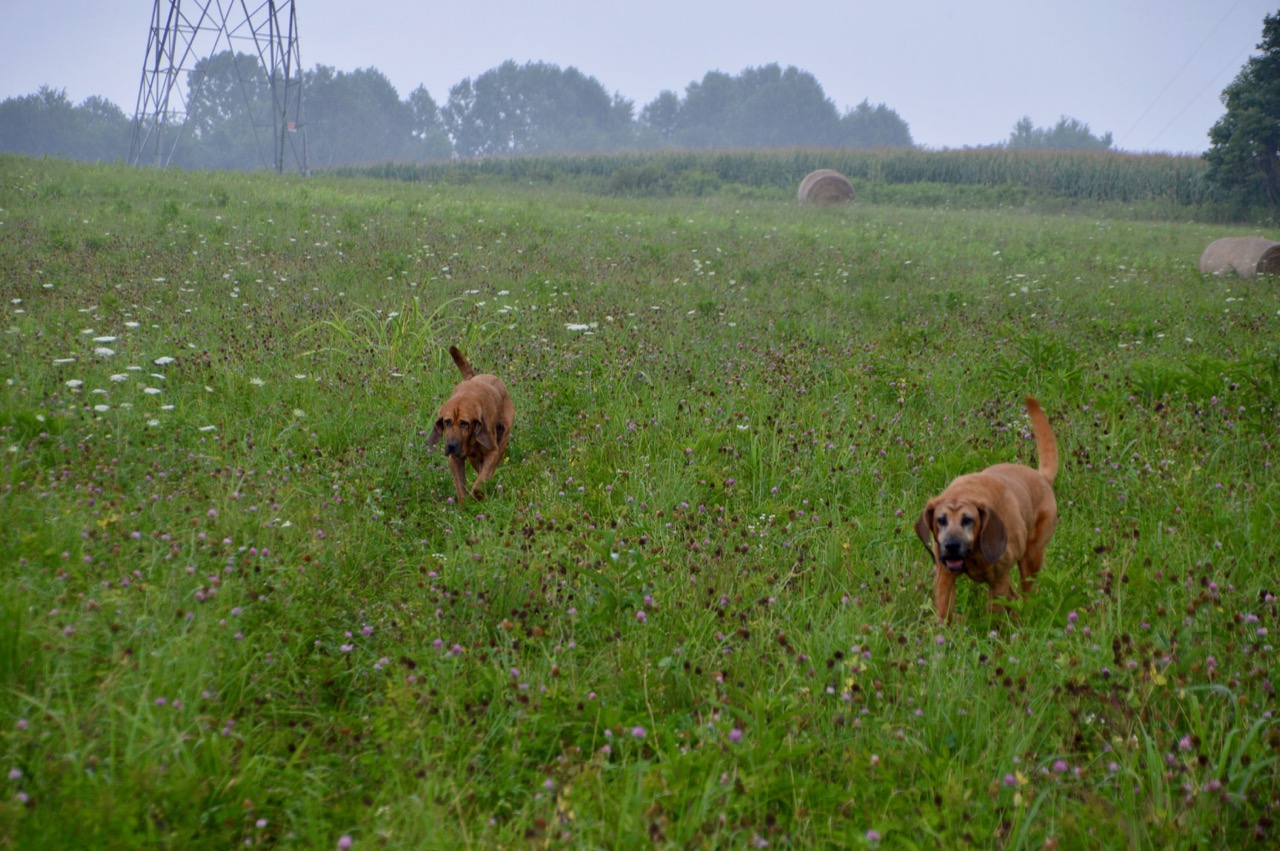 Sadie decided it was raining too hard for her and came running toward the yard ... not Stella. 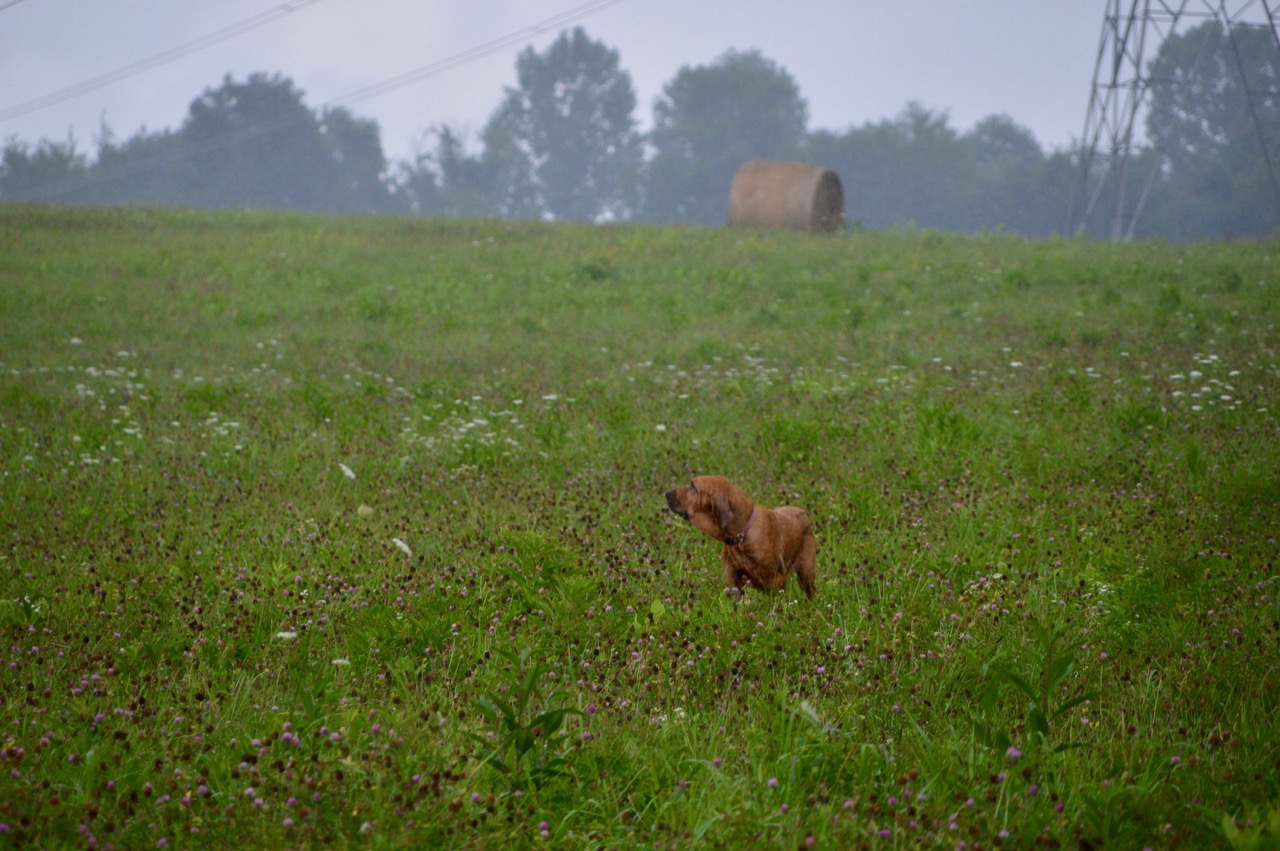 In fact Stella was almost making a right turn toward the neighbors yard/woods when I yelled 'no' again. She seemed to obey that word better than others today. You can see the rain against the background of the trees. 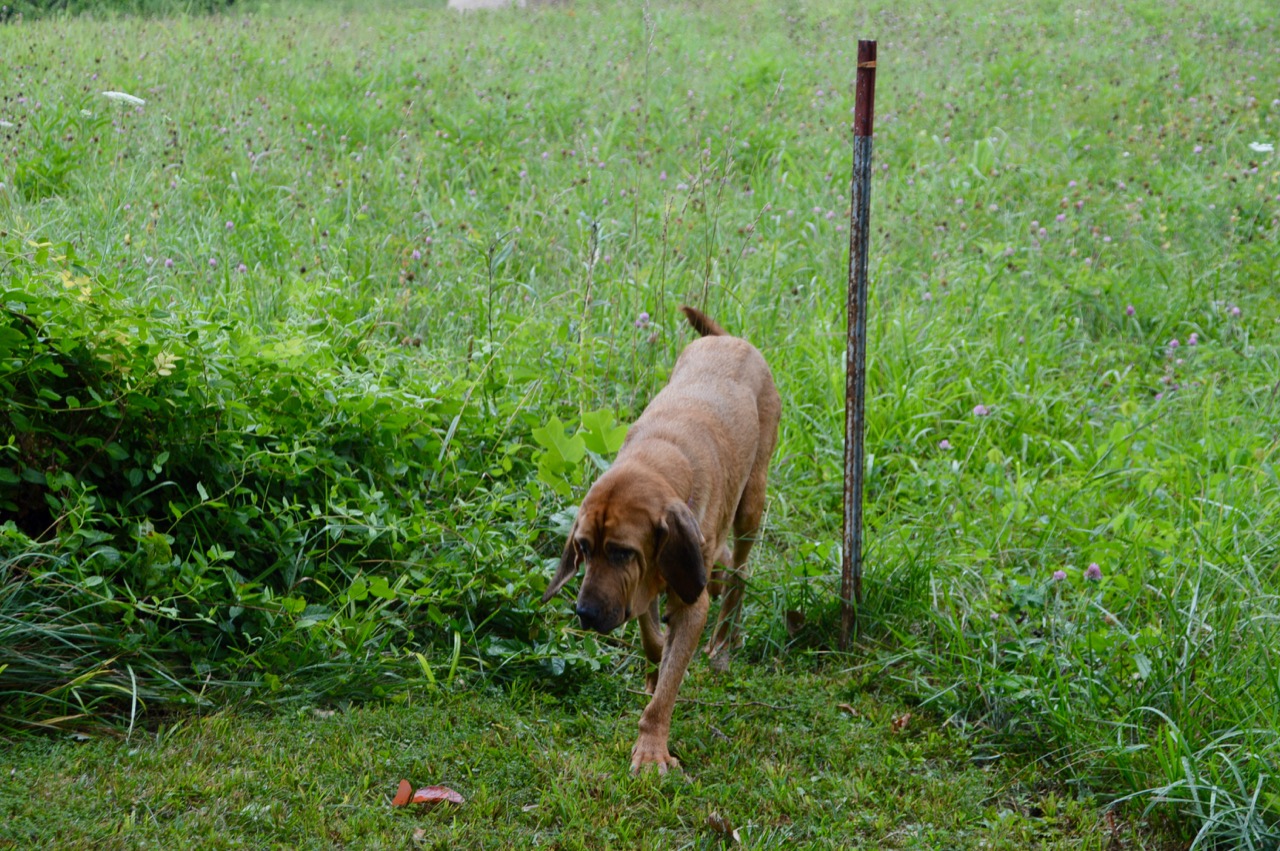 She never increased her pace. The rain came down in a steady stream and Stella walked into the yard slow as she ever does. 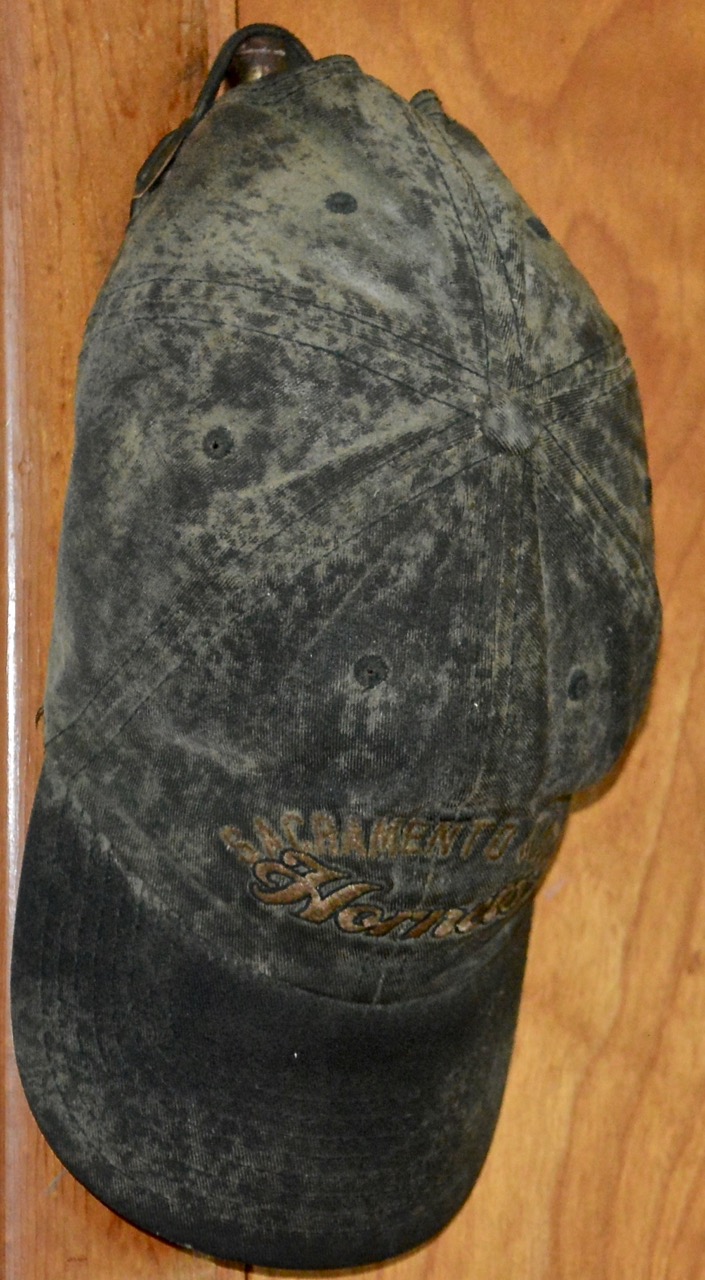 As you can tell it wasn't a sprinkle but wasn't a hard rain either. Both hounds were happy and asleep minutes after coming inside. While Heidi was still passed out on the couch, Sadie laid down by her water bowl to sleep and Stella was partially on the legs of my office chair. She will never go to sleep until she licks her paws and legs dry after a walk in the rain or heavy dew.

As I typed this it started to rain harder. Hopefully the Reds will get their game in tonight or I'll make it a movie night. The yard and plants will look better in a few days with some much needed rain.

All the severe storms have been missed here in 'the tropics' of Southern Indiana.
at July 21, 2018
Email ThisBlogThis!Share to TwitterShare to FacebookShare to Pinterest
Labels: Reds Baseball, Sadie Tracking, Stella's Slow Pace, Walk In Rain