The Hounds Take A Day Off 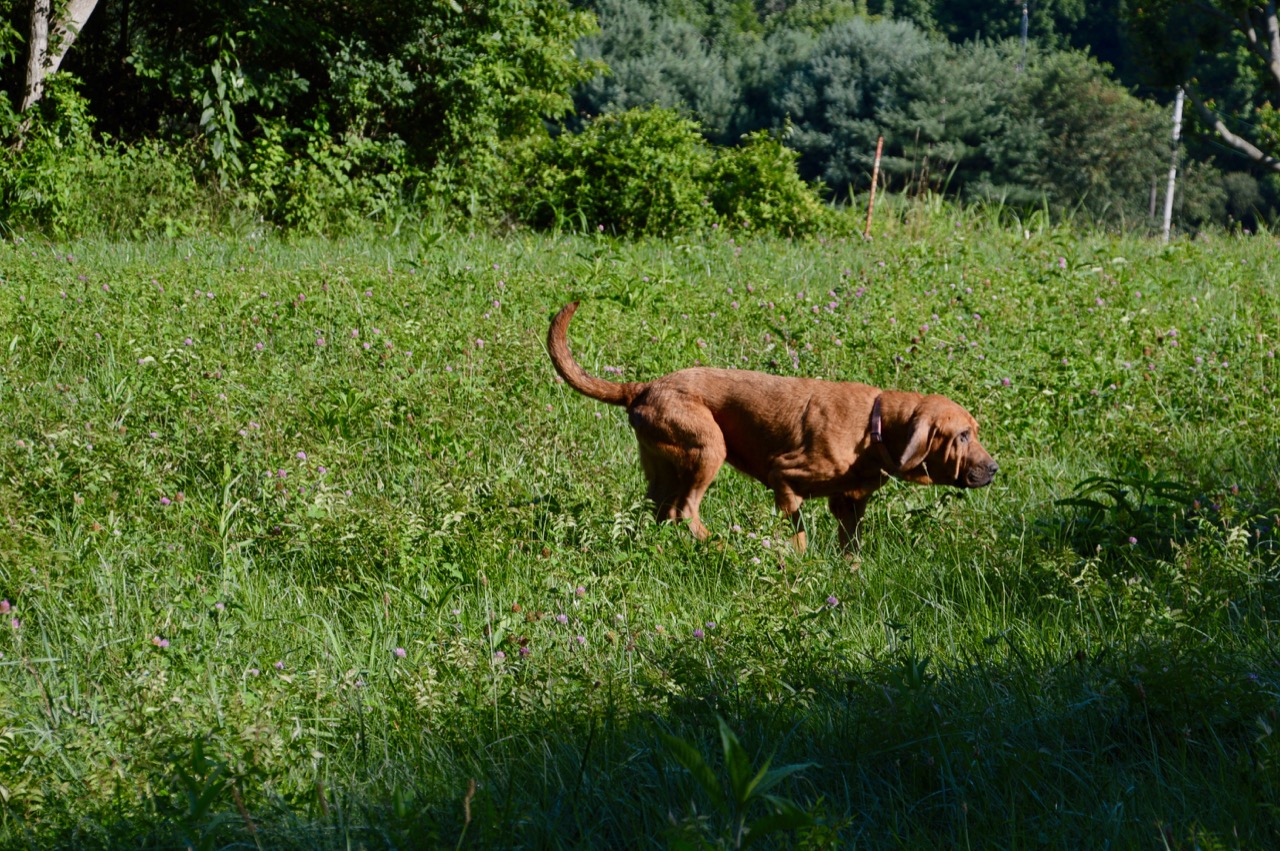 It was another nice day today, with the morning walk taken in 71° weather and a slight cool breeze from the south. The big difference was, my feet were dry during and after the walk, in a field that had heavy rain-like dew in the shaded areas. How did that happen? I wore my North Face snow boots again, just like last summer. Stella was so excited about walking this morning she was the first one out the door with a big nose to nose race between her and Sadie, on who would be first outside. 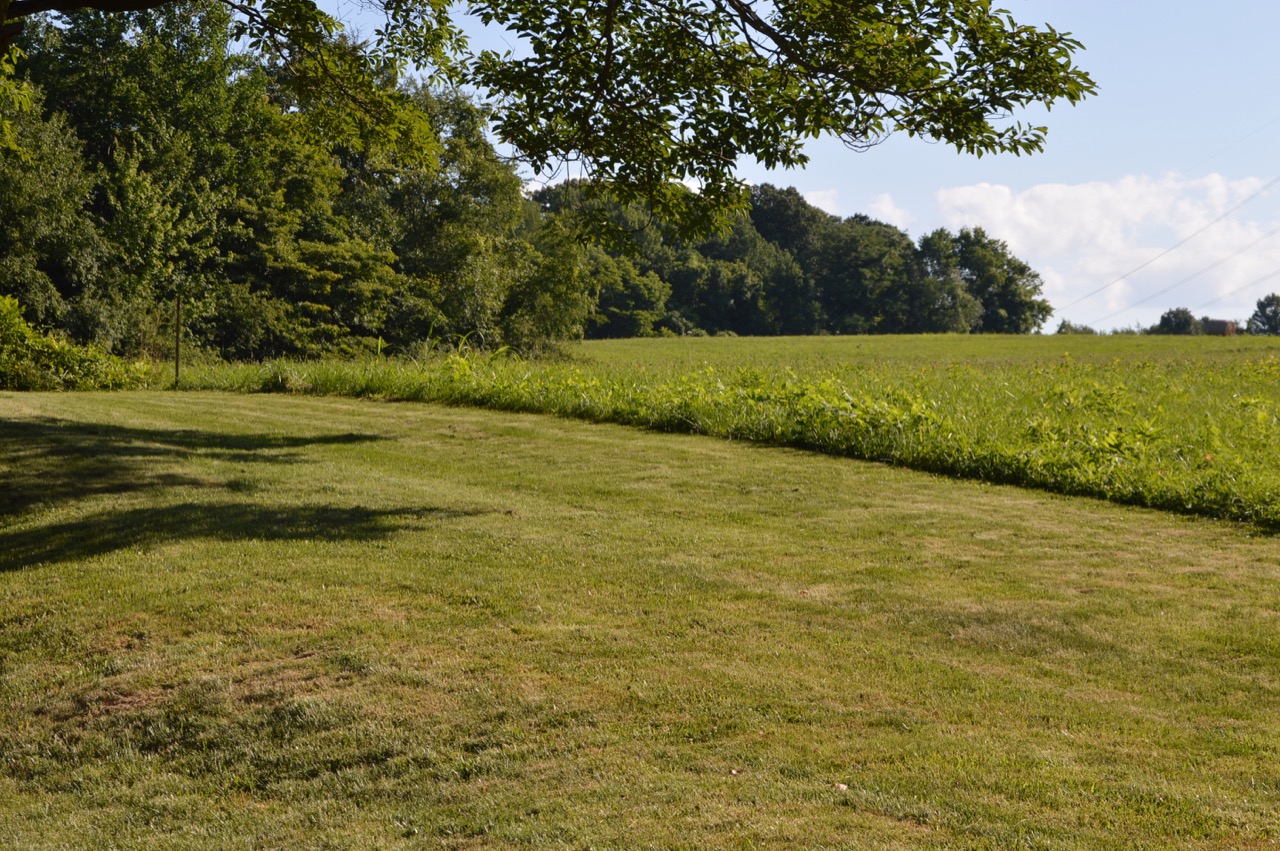 With the sun reflection this morning different than yesterday's late afternoon, I had a better view of the mowed yard. I couldn't help but post this photo this morning after admiring the change a sharp blade made yesterday. July brown is the lawn color of many houses here locally. We do not have a water shortage, nor is it expense to use water but I don't see a lot of people that water their lawns like I have in the past. I have not watered my yard in years and doubt that I do this summer. 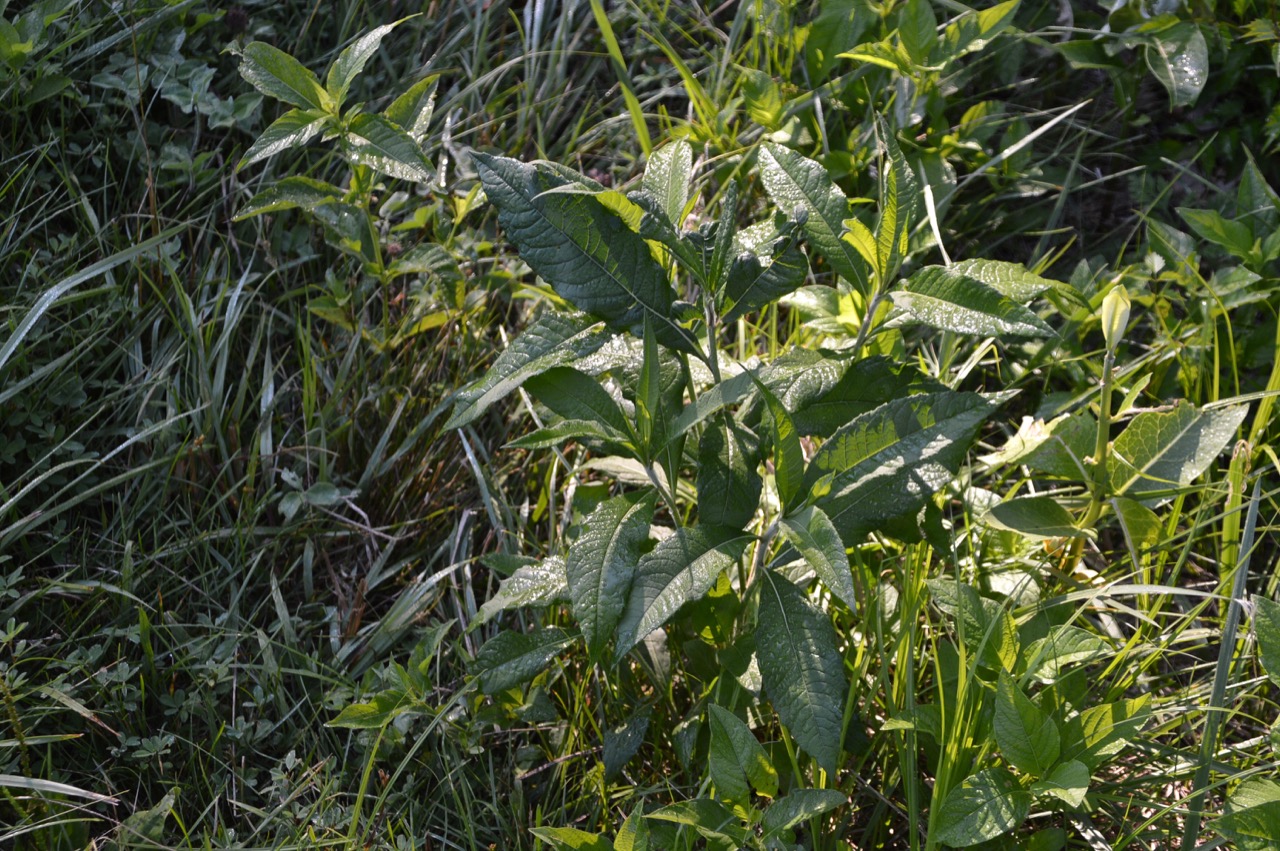 As Stella stepped into the field ahead of me I was happy I made the choice that I did in footwear. As of this morning there is no need to look for another pair of cheap rain boots that are low cut, not the ones that are knee high. The snow boots will do the job and it's only a 15 minute walk at the most. There is no other time in yard work that I get my feet wet. 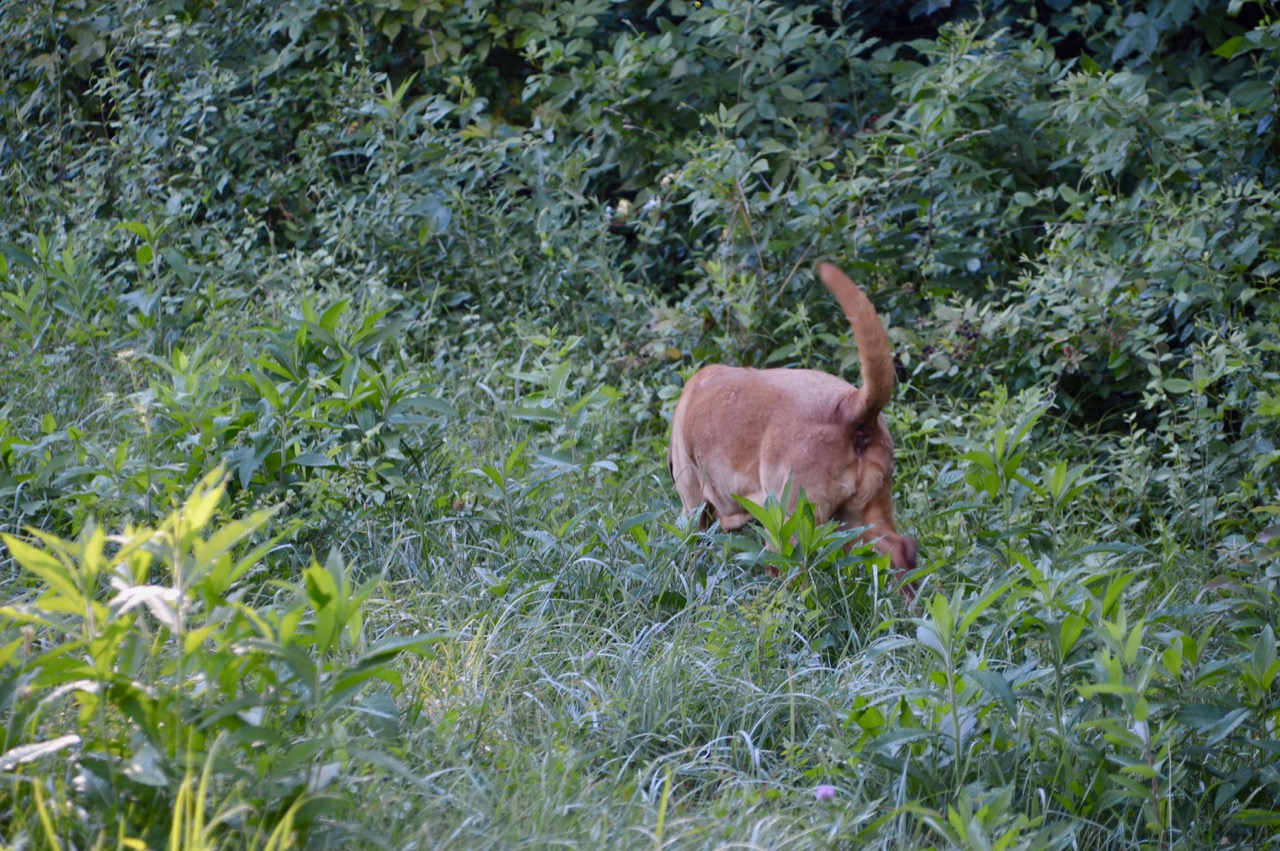 Sadie was back in her routine of exploring scent during her walk instead of eating, like yesterday. 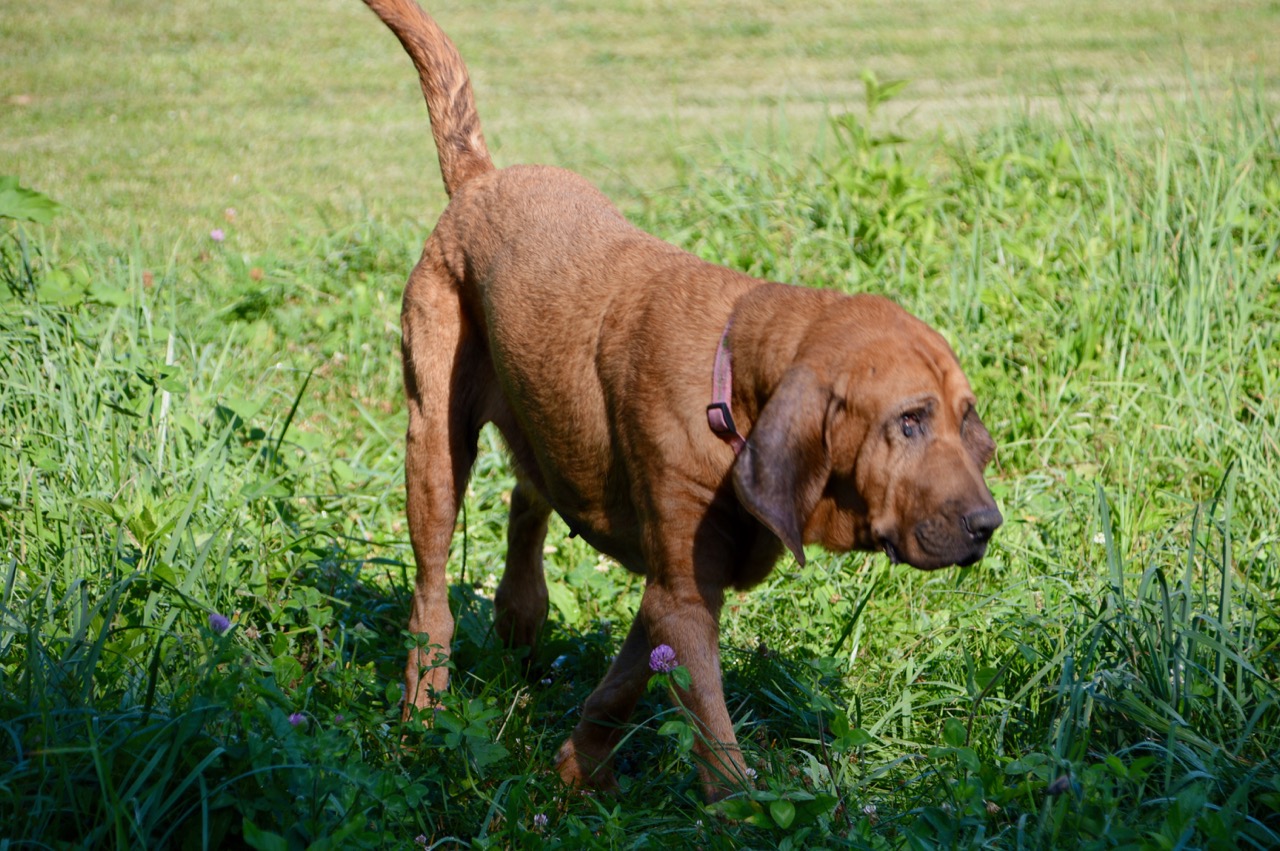 Stella was also back in her old routine of ignoring anything verbal and wandering with no specific plan in place. I wish I could be as laidback as she is. It took a lot of verbal herding of her today to finish the morning walk. There were even three separate times I had to backtrack and just the touch of her collar got her to move in our direction. Much like the mother I saw the other day in Walmart with her young child ... but there no collar was involved. 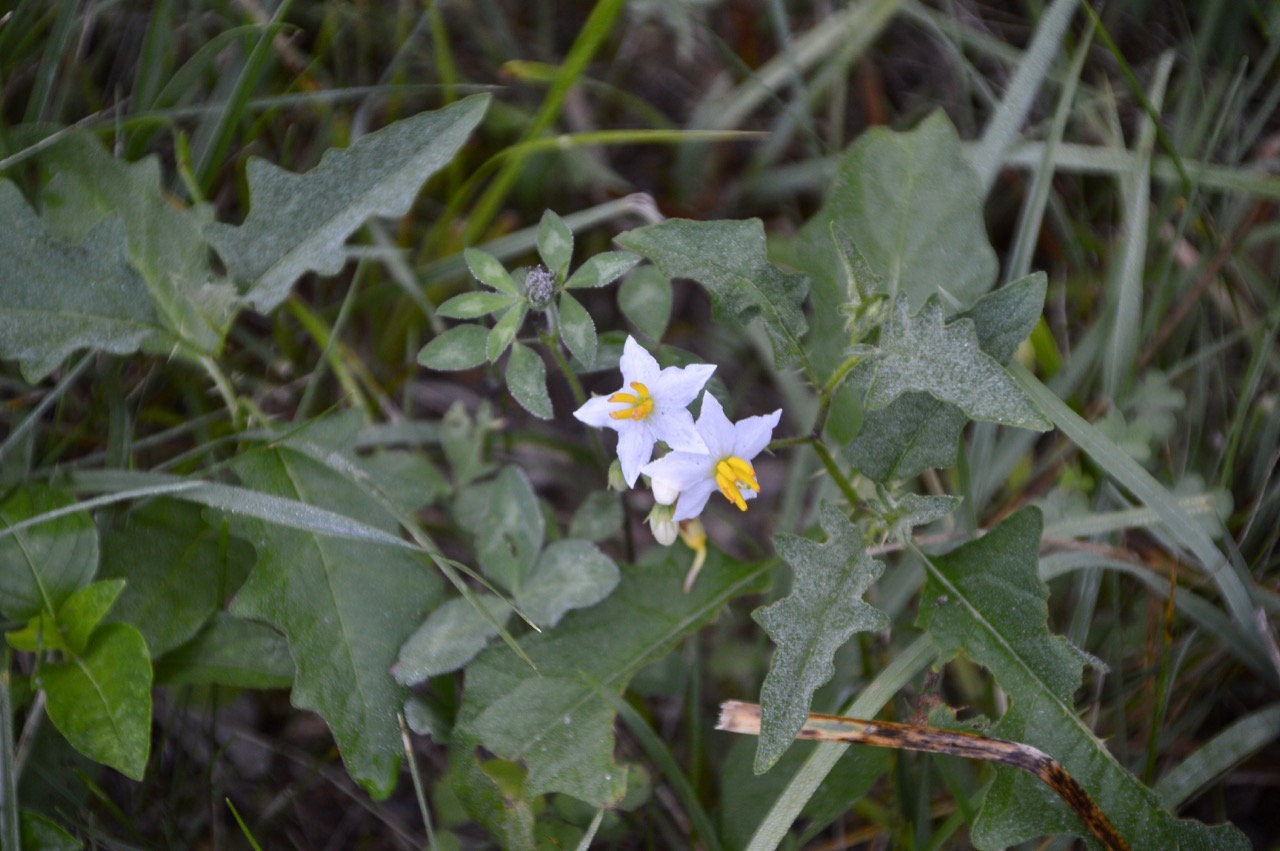 I am sure the gardening and plant experts can name this as soon as they see it. I can't. If a name or a plant is related to sports then I am pretty quick recognizing something. Otherwise my memory sucks on plant names, song names, shopping lists and what I had for breakfast yesterday. 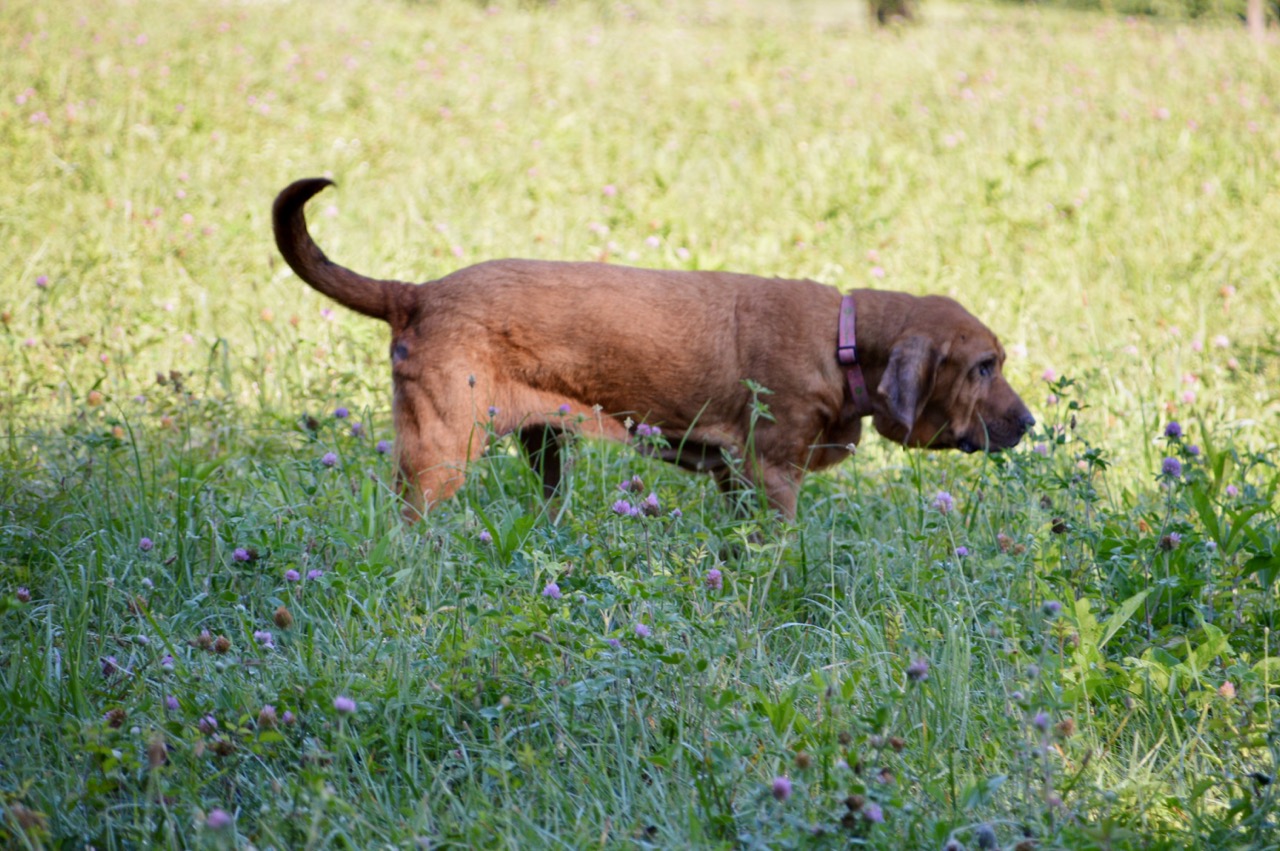 Stella followed her path slowly angling towards Sadie and I. She seemed to be feeling pretty good today as I witnessed a little more energy from her this morning. Of course when you compare her speed this morning against 'slow motion' I guess anyone or any hound would look energized.  LOL 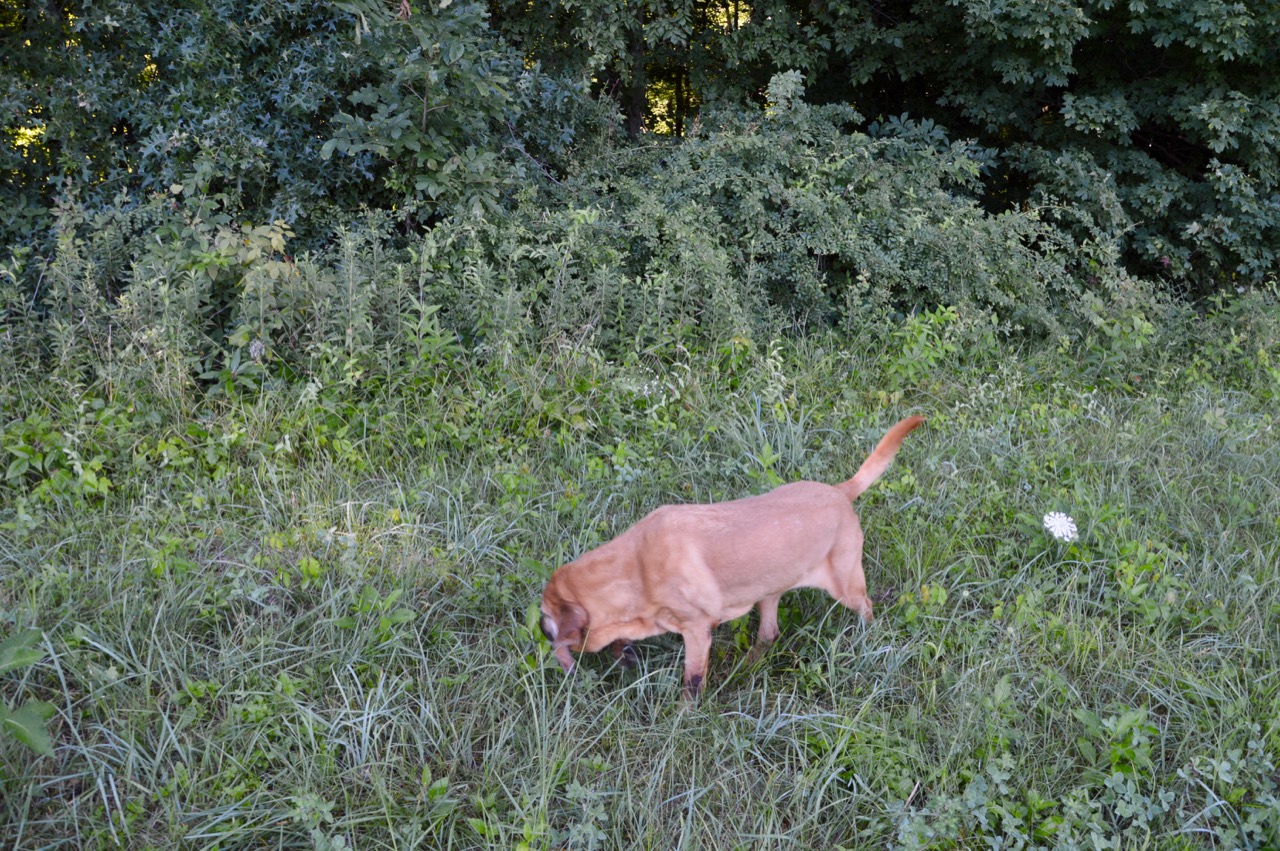 Sadie heard nothing, saw nothing, tasted nothing ... only smells were her focus this morning. 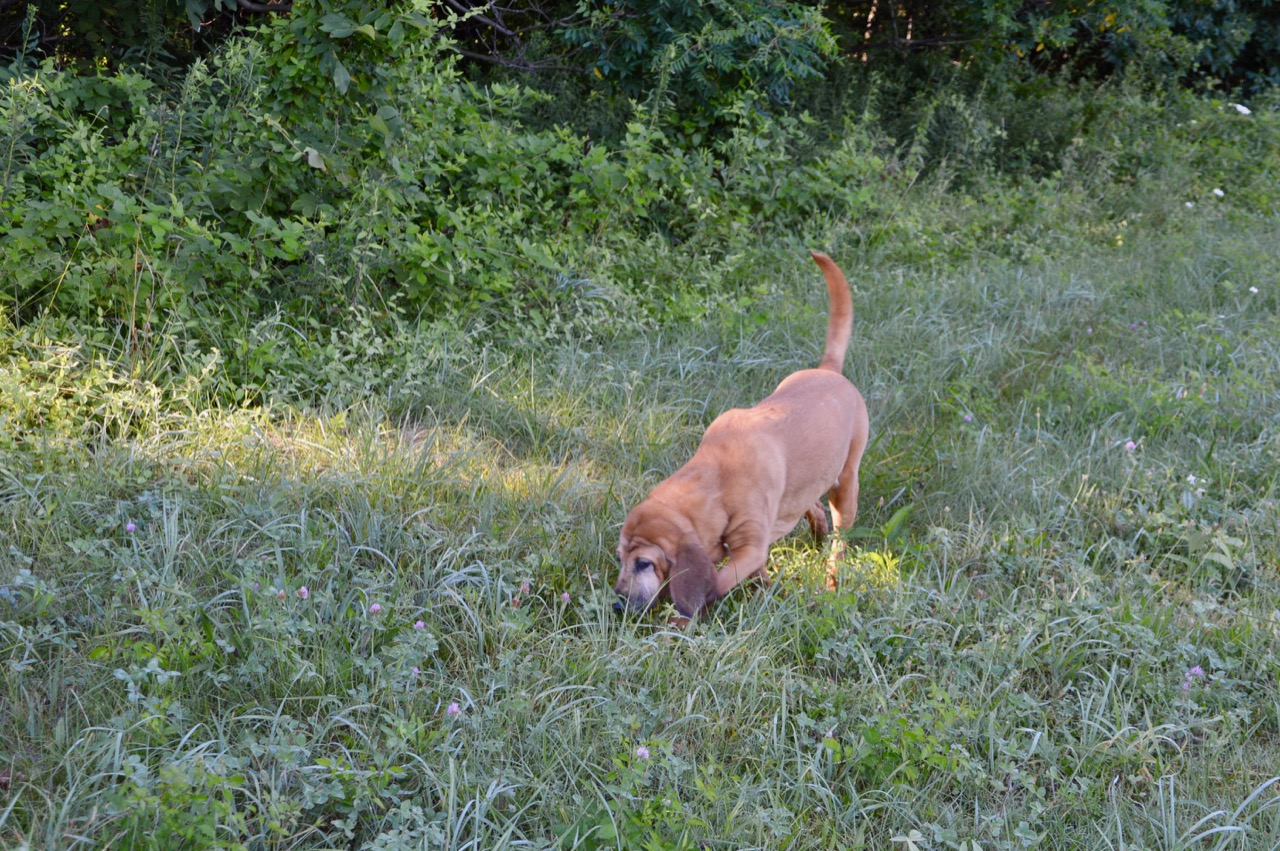 As soon as she gets back inside after these morning walks, she sleeps soundly all the way until lunch is served. Where was Heidi this morning on such a nice day .... stretched out on the couch snoring. 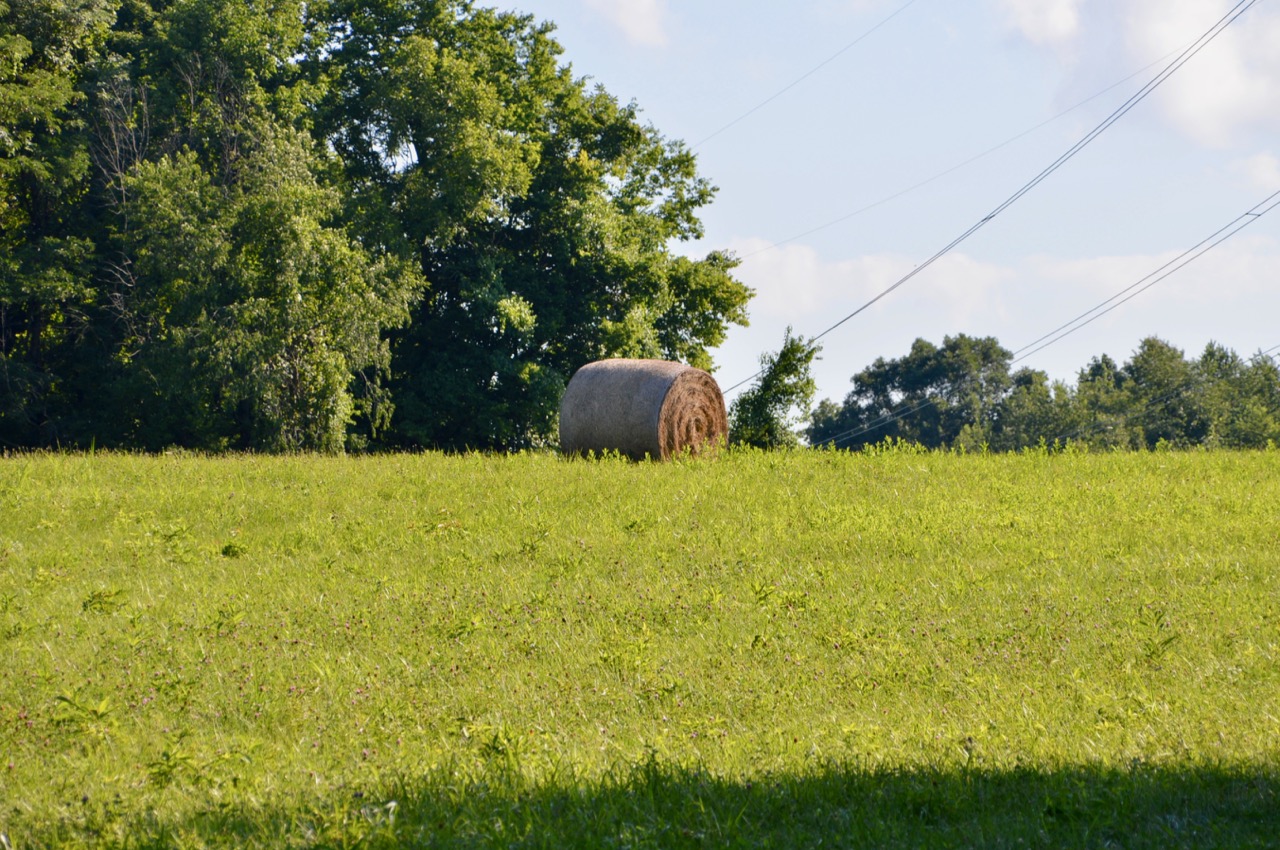 Thanks to a couple of comments yesterday, I left my camera setting at 'auto no flash' and will keep it there. Now my brain is searching the difference in distance .. this was taken at 135mm. I wonder how long these rolls of hay will stay here? Obviously they don't need the hay until this winter, but they usually have it picked up within a month of baling it. Not this year. 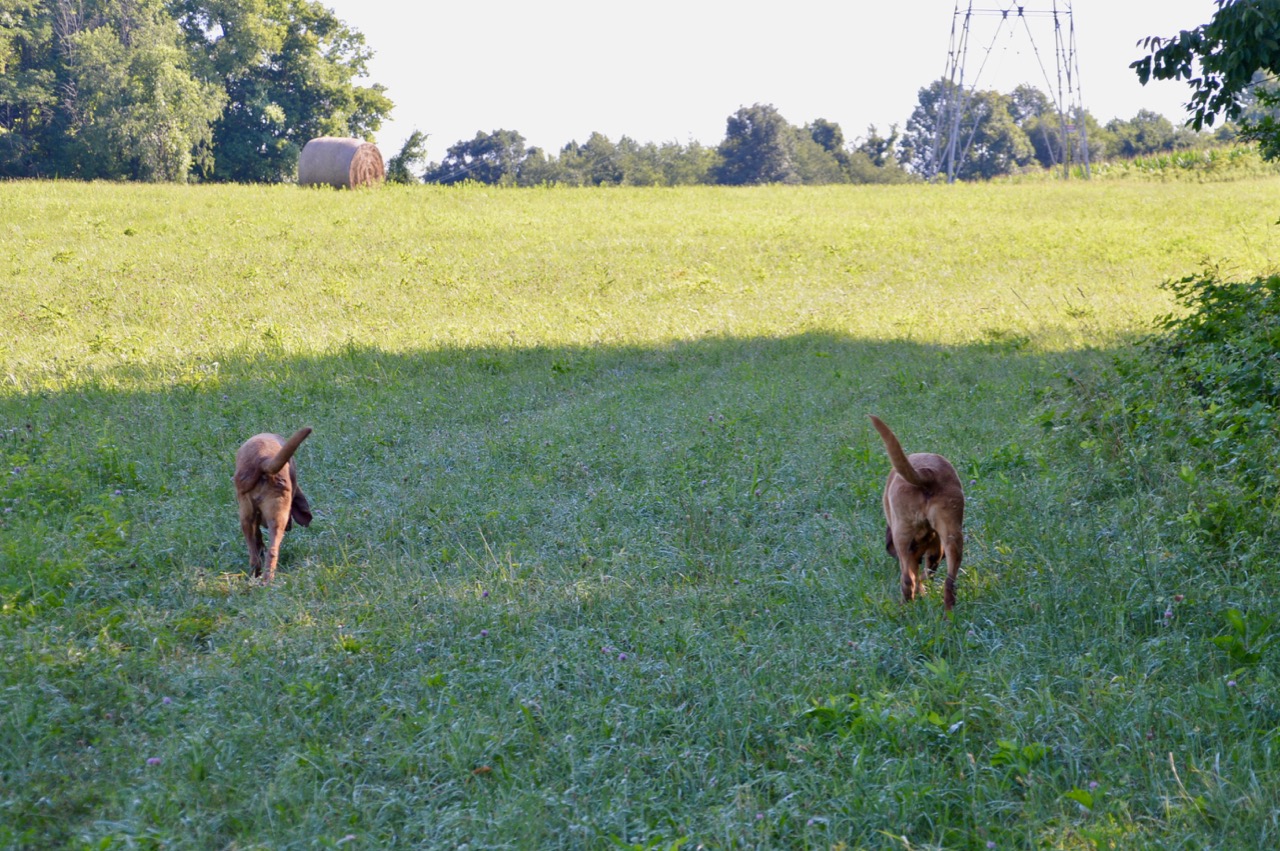 As we made the first turn this morning, the air was full of birds singing. No butterflies were seen and that beagle we saw yesterday was nowhere on the horizon ... I kept looking for it just in case. 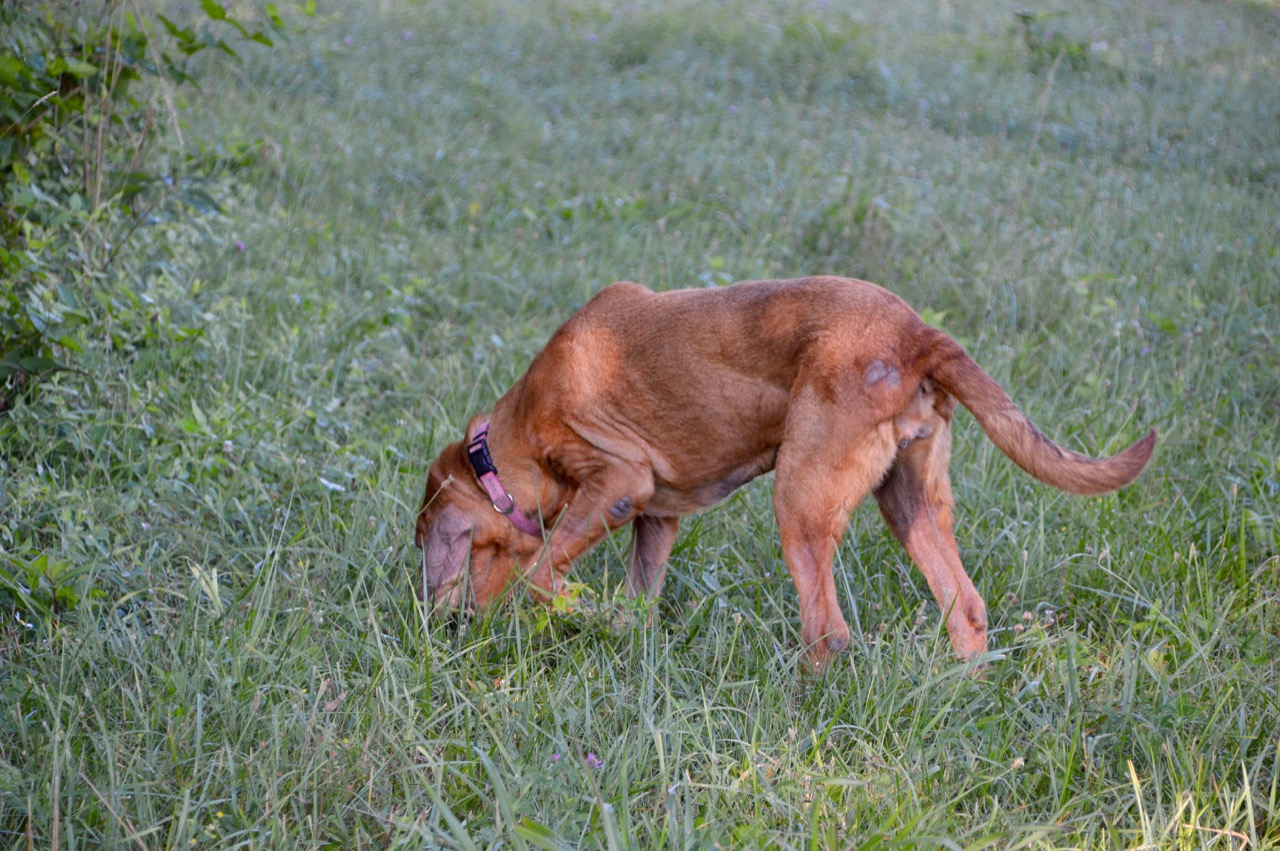 I've never been able to get rid of those 'elephant skin' patches you see on Stella. Different creams have been tried, all the creams were for canines only. 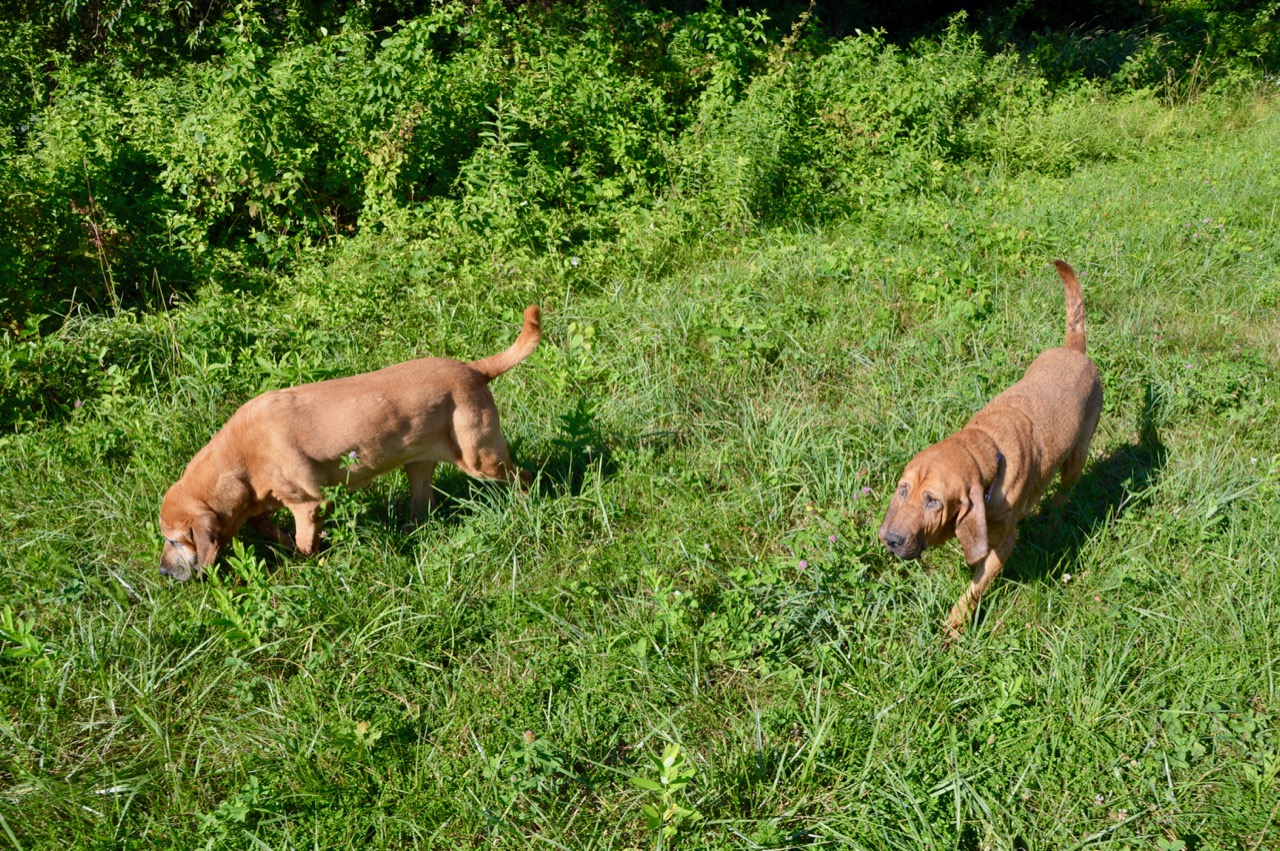 Unlike yesterday, at this point of the morning walk, I had nothing in my mind for today's plan. When you are retired you really don't need a plan but what it showed me, that brief one day slap in the face motivation had vanished as fast as it appeared yesterday. Unless I want to drive to Bloomington to pick up a new turntable, I didn't get anything done besides watching the Reds game in Chicago this afternoon. 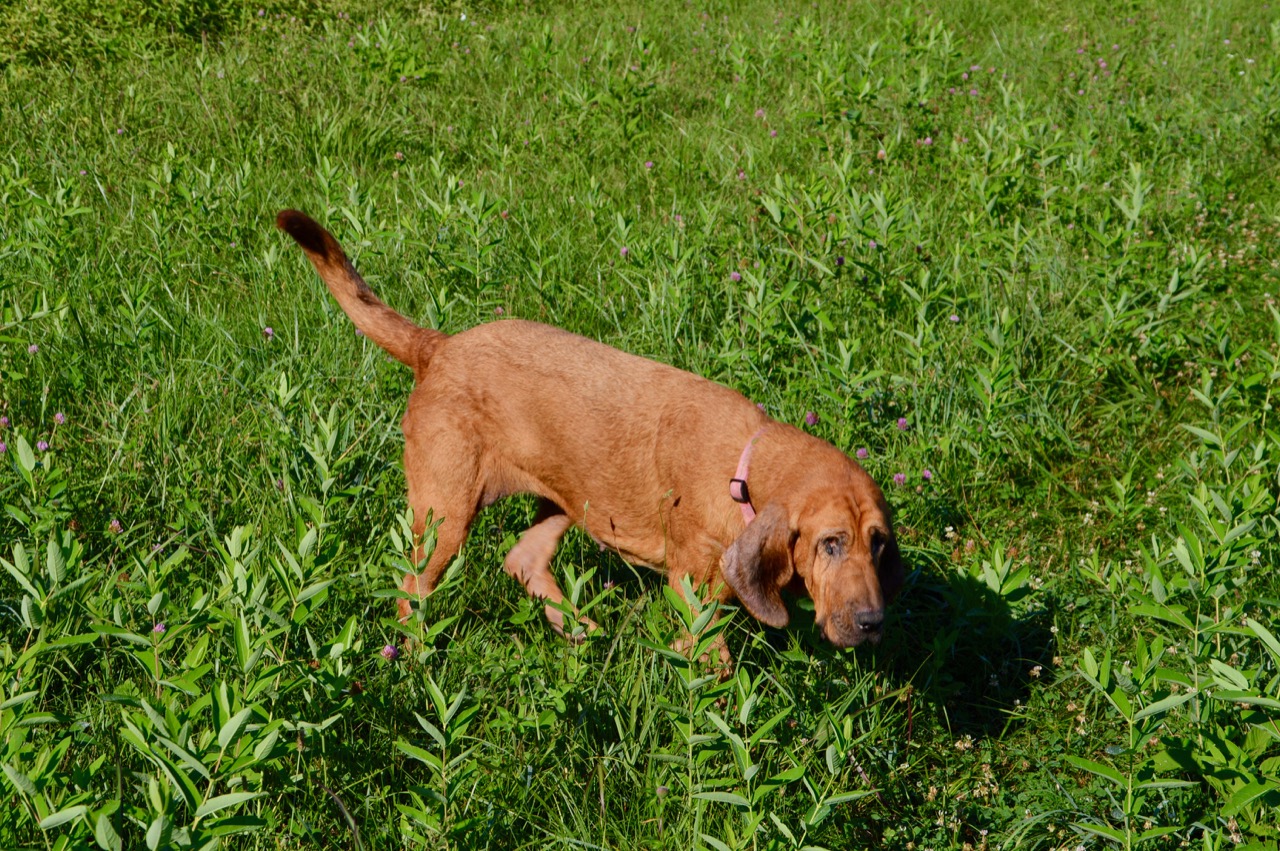 Turntable???? Did I say a turntable??? Yes I did. At 34 years old, with a new belt, that old LP vinyl record was sounding great the other day as it streamed through my brand new Yamaha receiver. Then a strange noise ...  then a screeching noise!!! I knew something major had happened. With my small camping LED flashlight I was able to find the cause. When a stylus is that old, plastic ages and breaks. The stylus needle had broken off from the cartridge.

After spending a few days online searching for a stylus replacement and then a cartridge replacement, I was finding that the replacements suggested of course were priced high, throw in some shipping cost and I was approaching the cost of a new turntable ... that was a MODERN turntable ... they now connect a USB cord to your computer so you an download songs from a vinyl LP into an MP3 file. Pretty amazing. 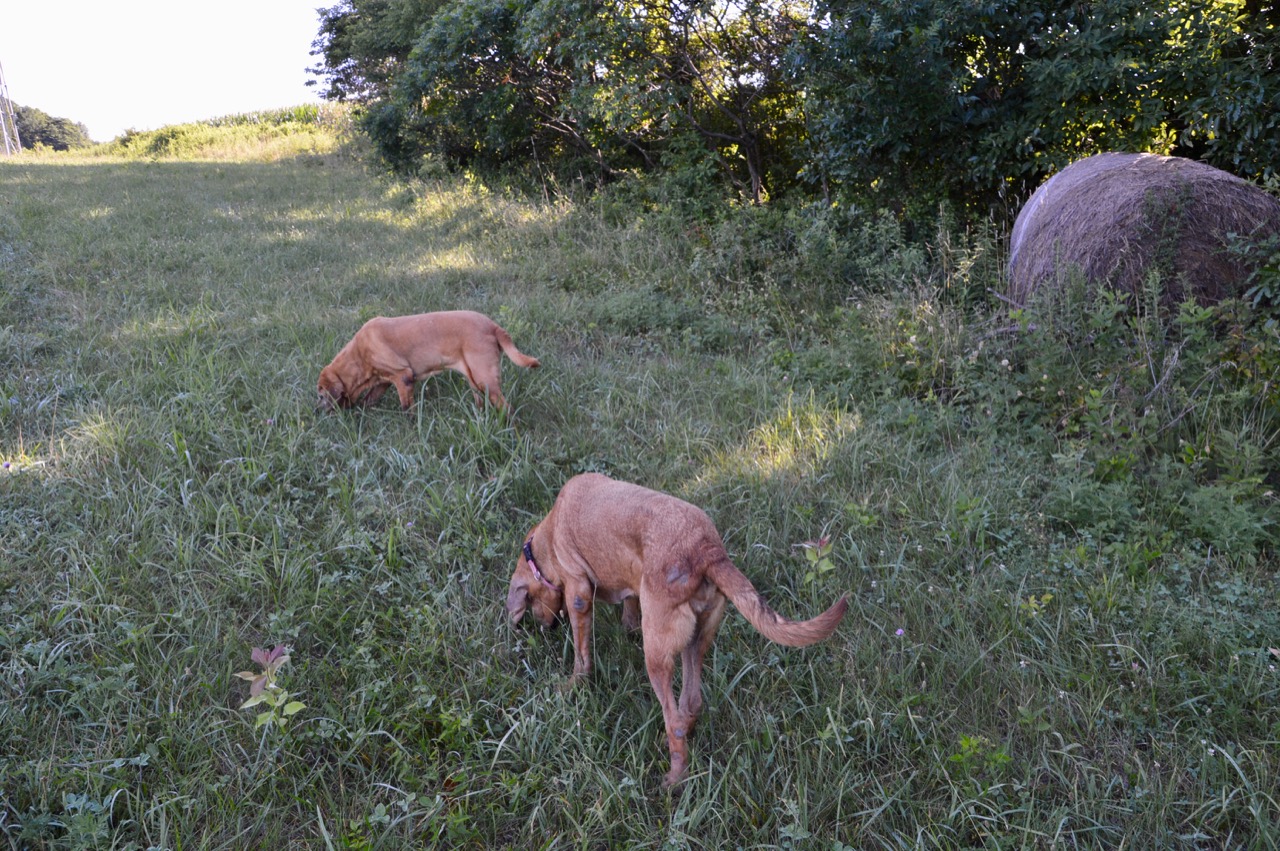 So yesterday morning, or was it Friday morning ? ... I started going through all of my vinyl records to see how many were duplicated when I bought a CD years ago. I wanted to double check on whether I really needed a turntable or not.  Luckily I did not have to go through the whole collection. Halfway through the first handful of albums, almost every album I looked at was not on cassette tape nor CD ... "case closed" I'll get a new turntable. Those LPs that I did see I wanted to play again. {By late afternoon I had almost decided to not buy a turntable but to take that same money and purchase those albums that were only on vinyl, electronically or on a CD. I may rethink that option whether to spend money on something that may not be used a lot.}

It was about this same spot yesterday that I saw a glimpse of something up ahead by the edge of the field, not knowing if it was a rabbit or a small dog. I double checked this morning to see if the beagle had come back but not really expecting to see it. I had a feeling it was just visiting neighborhood yesterday. 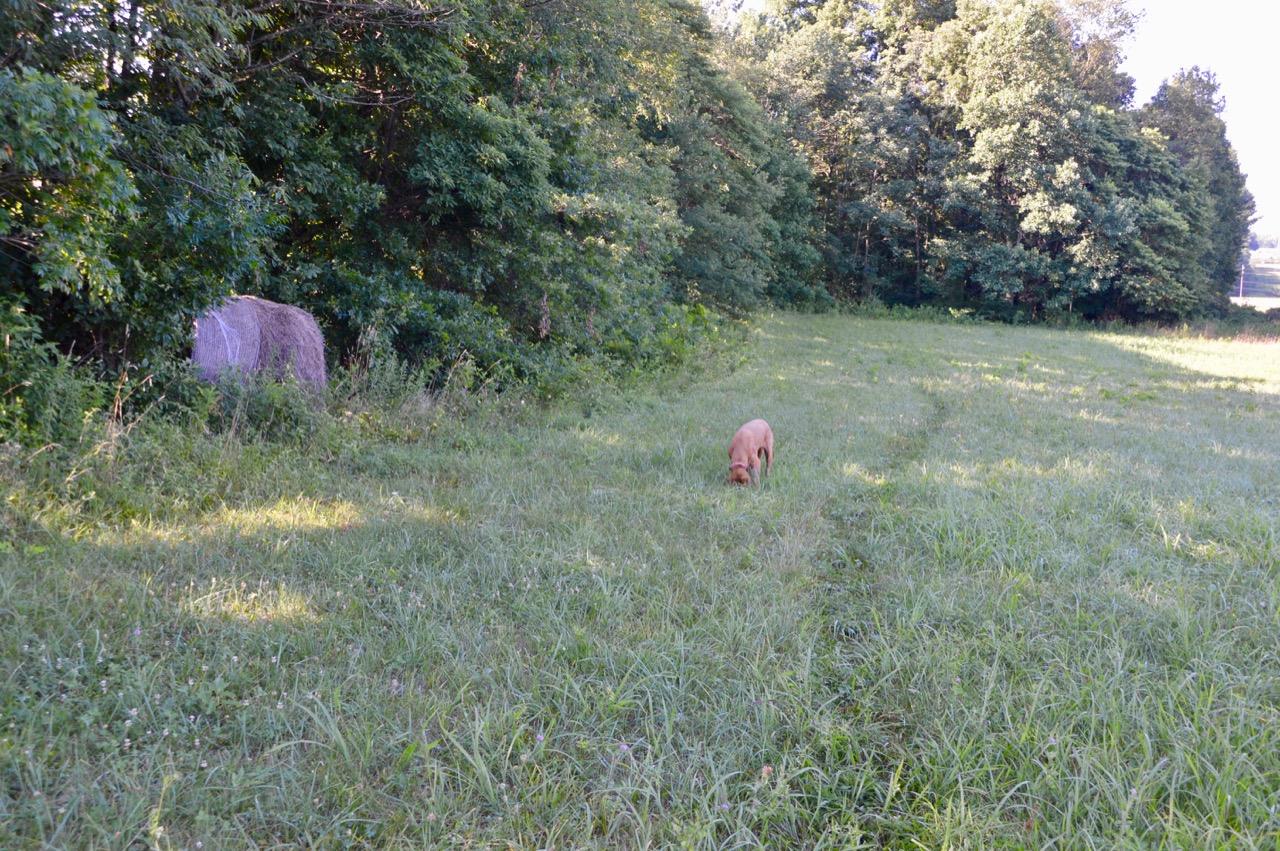 I am not sure how many of you have dogs. Nor do I know if you take your dogs for walks off leash, giving them total freedom, but this is a fine example of a bloodhound being stubborn, just as their AKC description states. It is also shows it was one of three times I had to walk back to 'start' to grab her collar to get her to move in our direction. Some times Stella was start walking our direction once she sees me walking towards her. Sadie is standing right behind me when I took this photo ... also waiting. 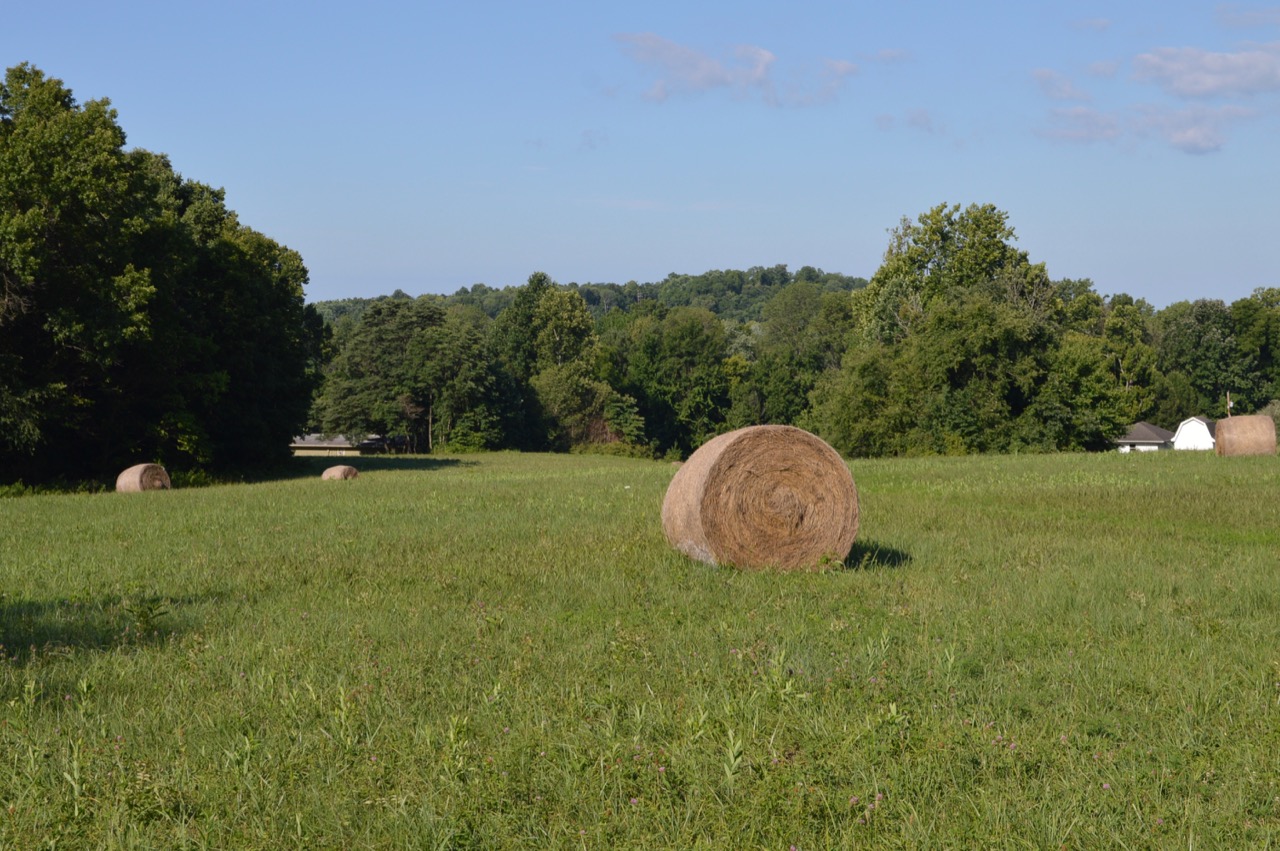 I like this view of the field ... it is a good way to show what kind of day to expect ... minus high temperature readings. It won't be long before all those green leaves will be different colors. 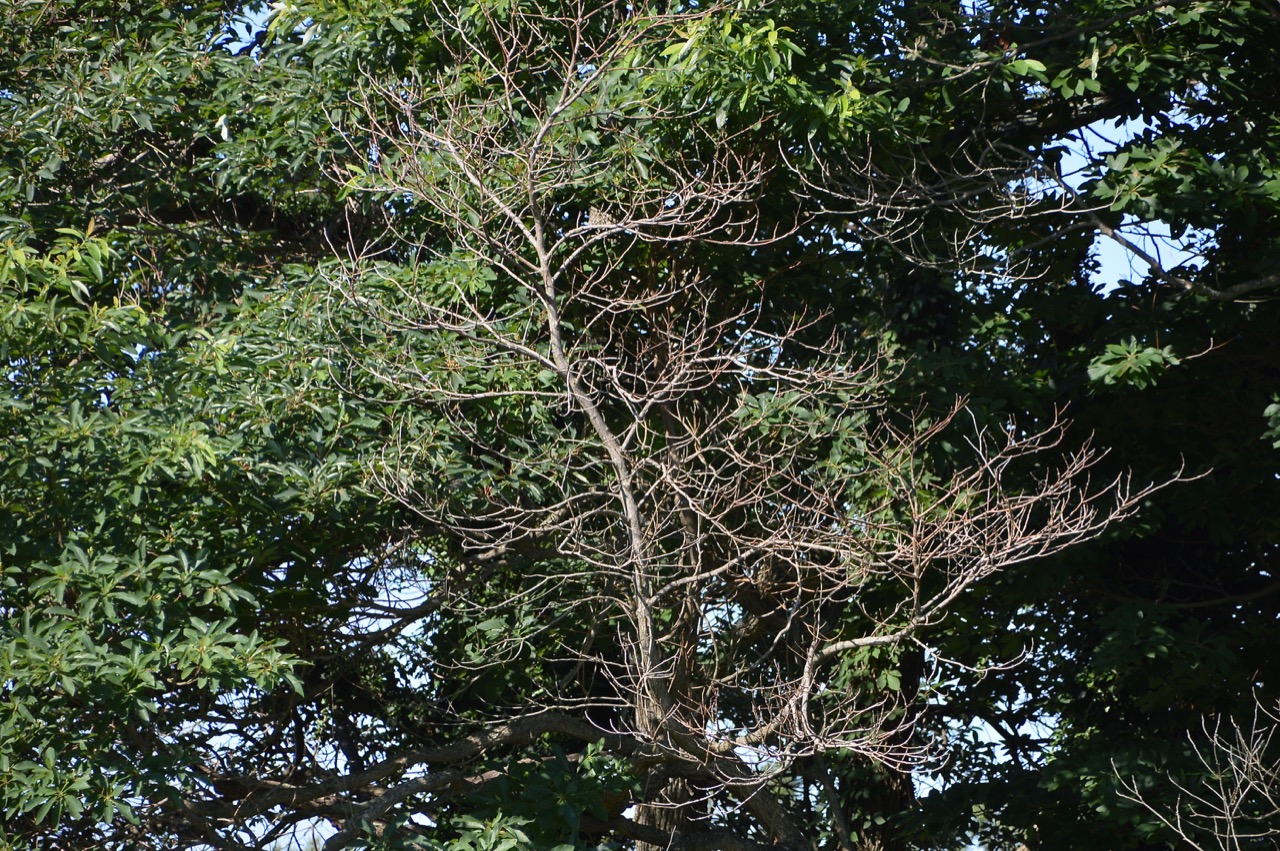 Looking at the treeline of the Mahogany trees behind the house as I walked back home, I noticed a section that did not have leaves this year. I wonder why? That is just not one Mahogany tree like my friend thought it was a few years ago but a group of small ones. As I type this I am following that leafless tree limb down toward the bottom of the photo and know it's a single limb a few feet away from the others ... and I remember it was like this last summer also. It looks healthy. 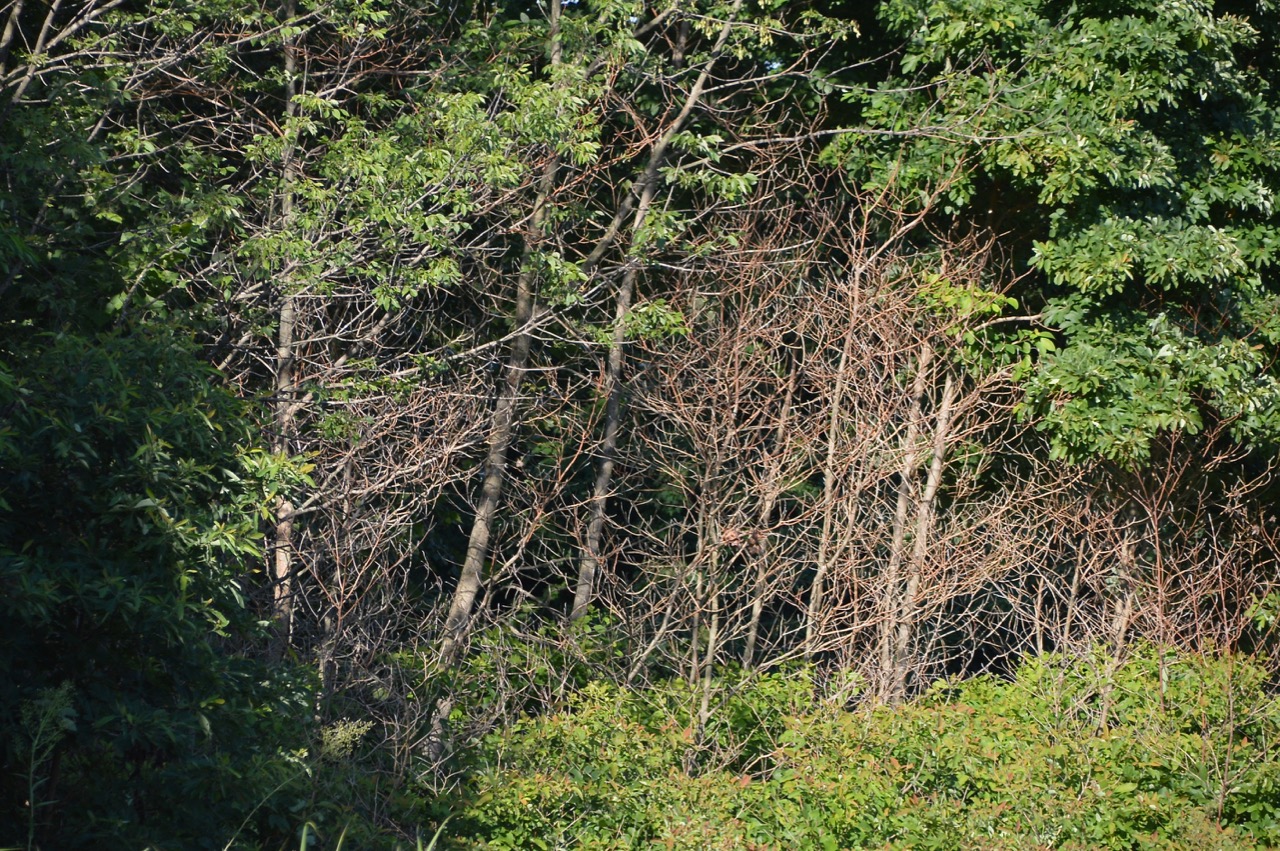 This section is to the north of the front yard on the field side of the property line. I know why these trees look like they do. It was a couple of years ago when I decided to burn all the dead leaves and brush that had collected over many years between the saplings on the north side of the yard. The flames were high enough to shoot up into those trees and was so big that a car passing by on the highway decided they would call the fire department for me. He didn't know that I had things under control. It didn't take long for the local volunteer fire department to put my fire out. Like the bank on the opposite side, the bare ground from burning brought back that same wild growth 3x as thick. 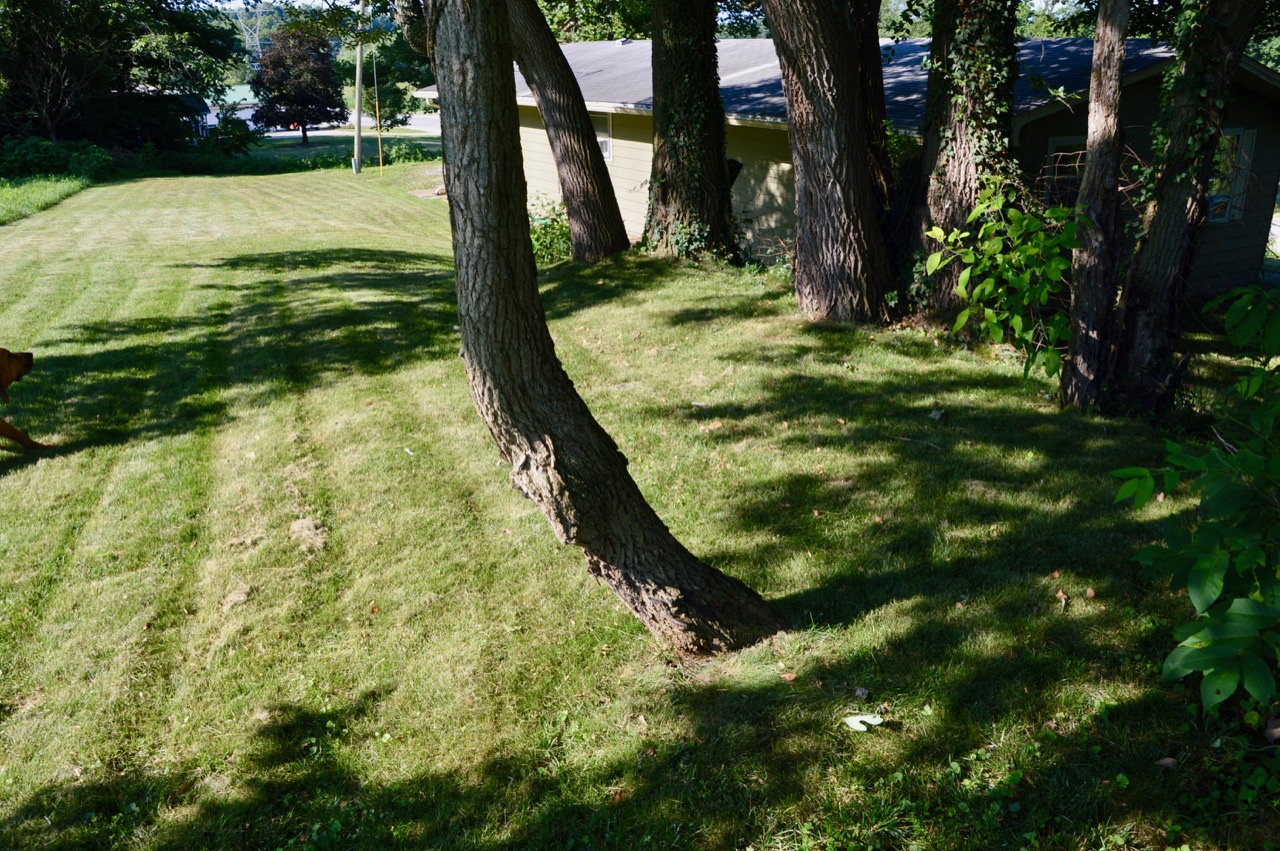 I have said it before but I need a chair up in this area. To me this is the best part of the yard. A good 10° cooler even in the hottest days of summer. That single tree in the center of the photo is the tree that has no leaves. It is not a problem mowing and trimming the grass around it but maybe I should cut it down to ground level. 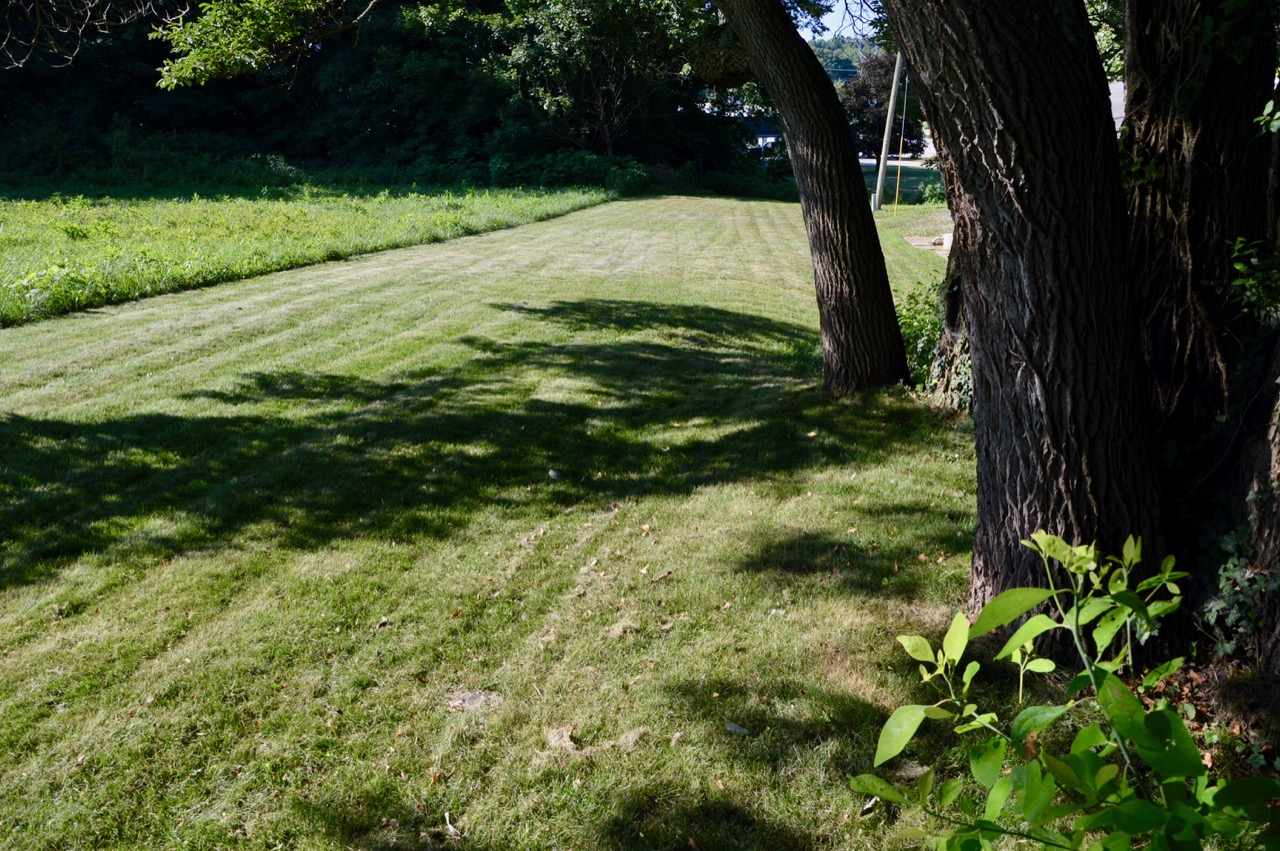 With the mower raised back up one notch to a 3" cut I will be able to miss a week in my mowing schedule. We are looking at a couple of days it might rain but in 'the tropics' of Southern Indiana, those forecasts can change within 5 minutes.

The afternoon turned out to be a pretty lazy day. I watched the Reds game until 5:15pm when Sadie couldn't wait any longer for her her afternoon walk. A little too hot for me but we took off anyway as the Reds game looked like it was going into extra innings.

I had planned for some afternoon photos but the hounds had other ideas. While they were outside after lunch I was pouring a new 40lb bag of dog food into the sealed storage container. I grabbed the camera expecting that Heidi might be sunbathing in the front yard while the bloodhounds roamed the field.

How wrong I was ... all three were standing at the door wanting back inside. Within 5 minutes ... all three hounds had chosen their afternoon napping spots and were sound asleep. So with a little free time until the baseball game I installed Firefox Quantum on my laptop, imported all the current bookmarks and did the latest updates to Firefox. Now that I have blocked autoplay for videos, I really like using that browser. It has the security of Safari and the features of Google Chrome.

The suns reflection told me the Z4 needs washed. With the rain no longer in the 5 day forecast I'll wash it in the morning and then do a little weed pulling in front.

It turned out to be a pretty lazy Sunday, not really a surprise after all the work I did outside yesterday. I have a tape of the IndyCar race today in Iowa and the 2nd Stage of the Tour de France to watch tonight.

Otherwise the weather was beautiful again today here in 'the tropics' of Southern Indiana.
at July 08, 2018