The Hounds Had A Visitor Today 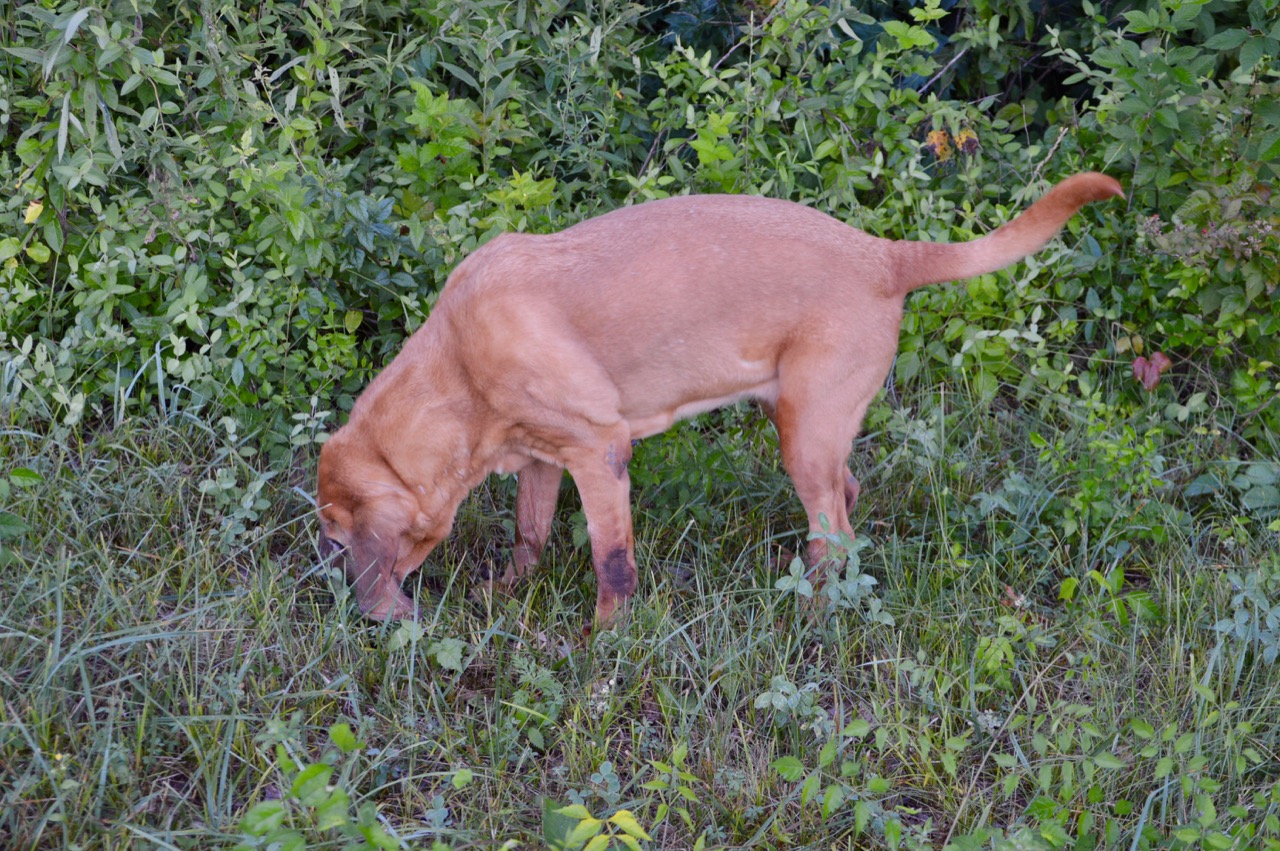 I knew when I decided yesterday not to rake up the excess grass that a plan was coming together. I prepared last night by putting on a layer of Gorilla Glue to the pieces of my shoe sole that was pulling apart on my old Merrell "foot gloves". They don't make that trail runner anymore and now I wish I would have bought three pair instead of the two pair I bought ... great shoes. Yet with the glue repair, the shoes might last another year or two. 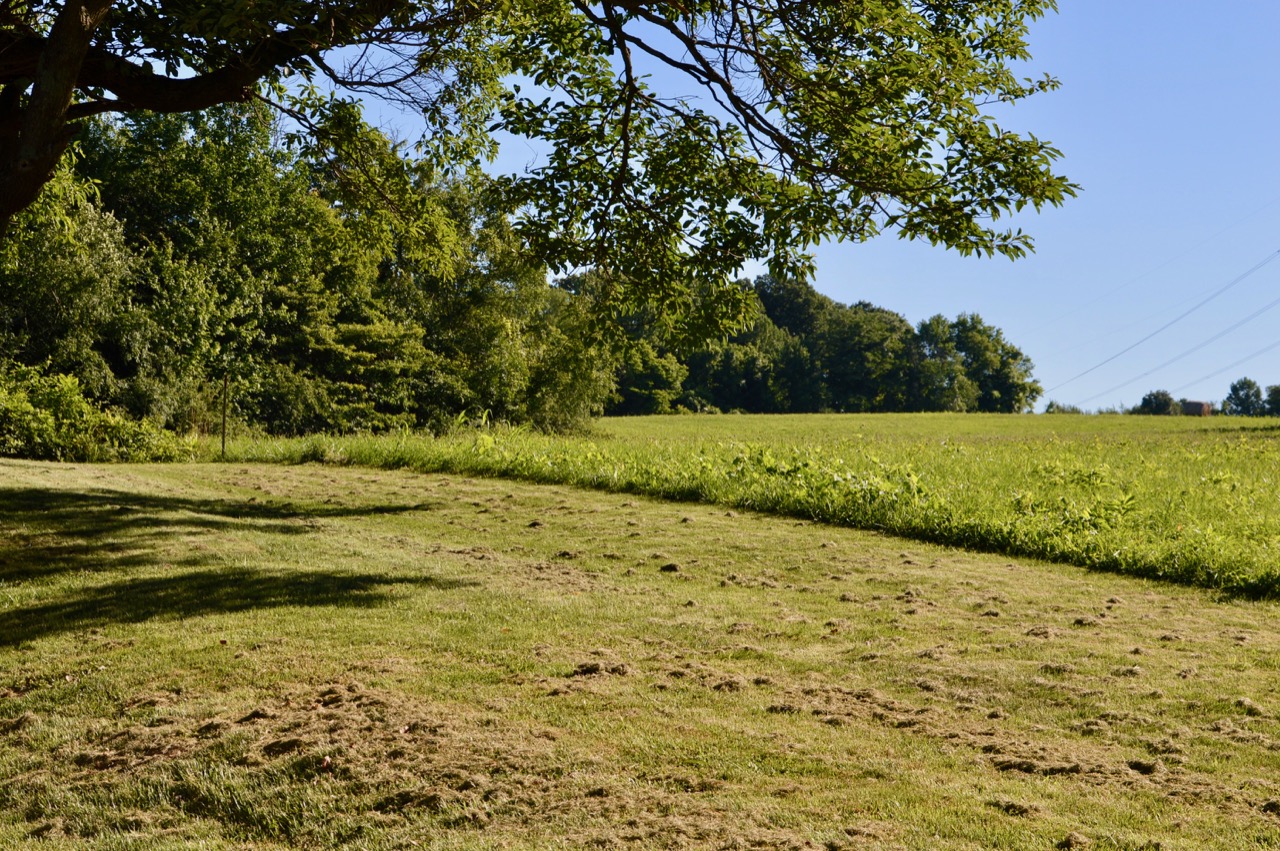 The third part of the plan fell into place very early this morning ... it was 68° when we headed out on our walk this morning. If felt fantastic and not a hint of humidity as cold air was blowing from the north. After a good night sleep with the windows open, I could tell there was going to be some motivation I was going to have to take advantage of. At the time I didn't know how much I would do today. 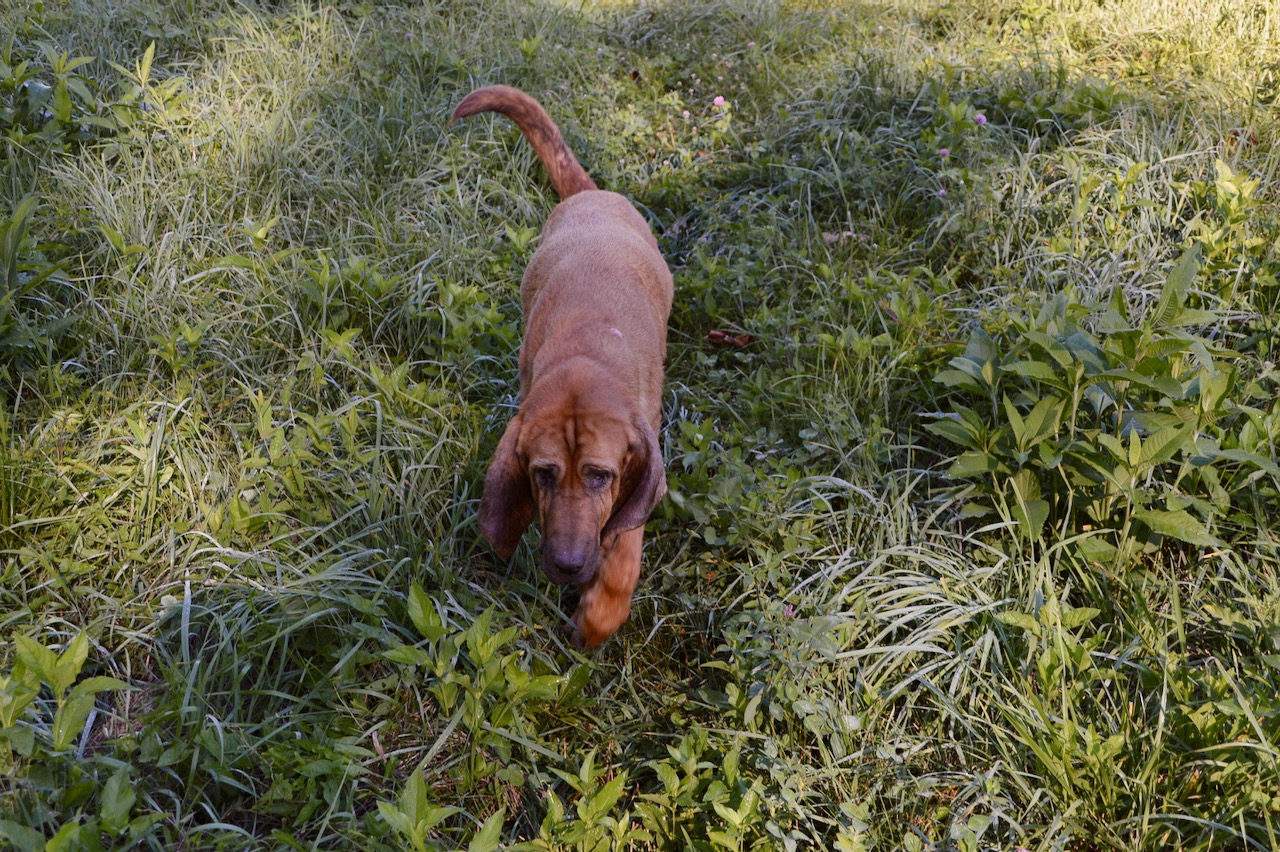 Stella started with a surprise by heading out into the field for the walk, directly on the path. I had planned to get my feet soaked and wore the appropriate shoes and sock.s What I didn't expect was just how old that heavy dew was as I could feel it squishing in my shoes as we approached the first corner where we make the first turn. 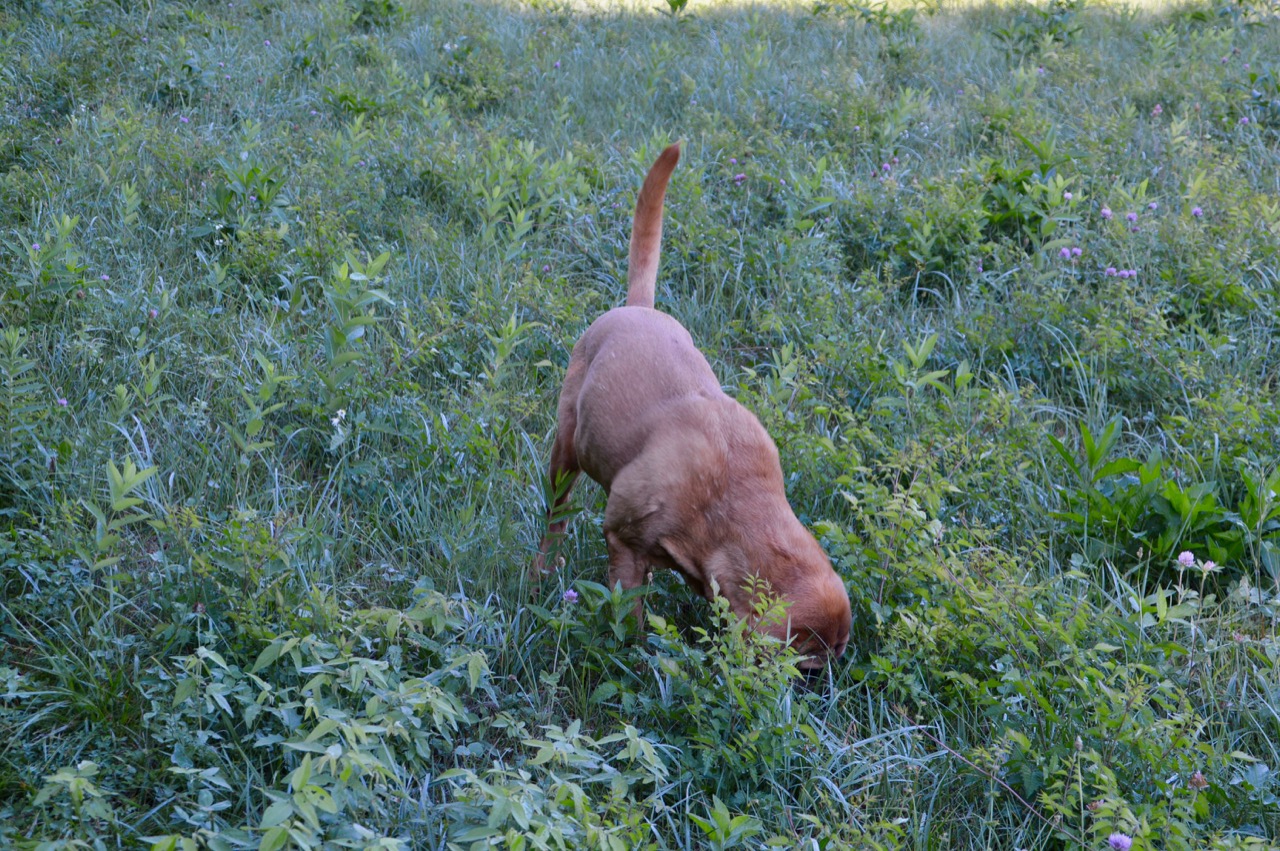 I could tell early in the walk that the theme of the morning was going to be deer scat. Even Sadie was not interested in her daily exploring, which surprised me ... but that wasn't going to be the biggest surprise of this morning. 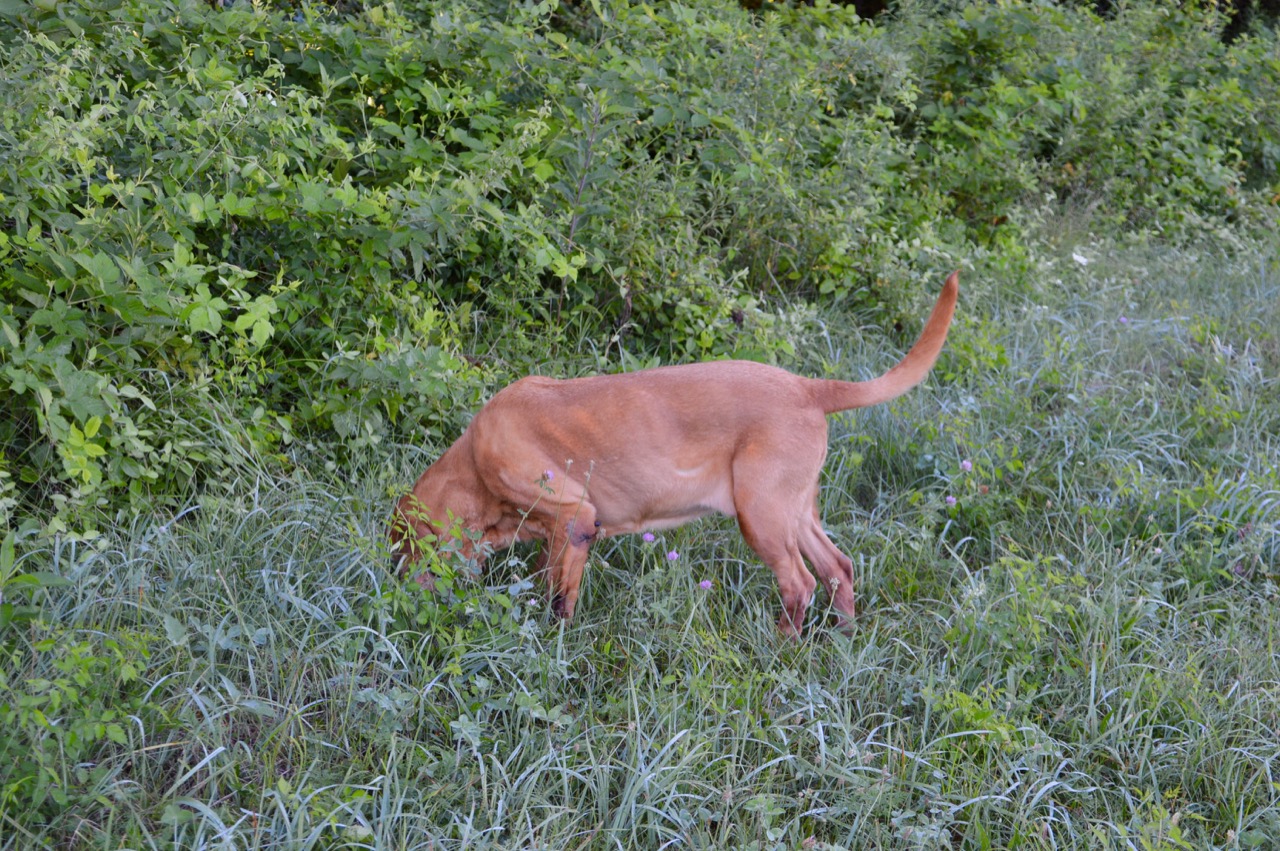 It was nice to see Stella not veering off the path anywhere. Sure, she might move six to ten feet away but she was always headed in our direction. I was thinking about how cold my feet were more than anything else. 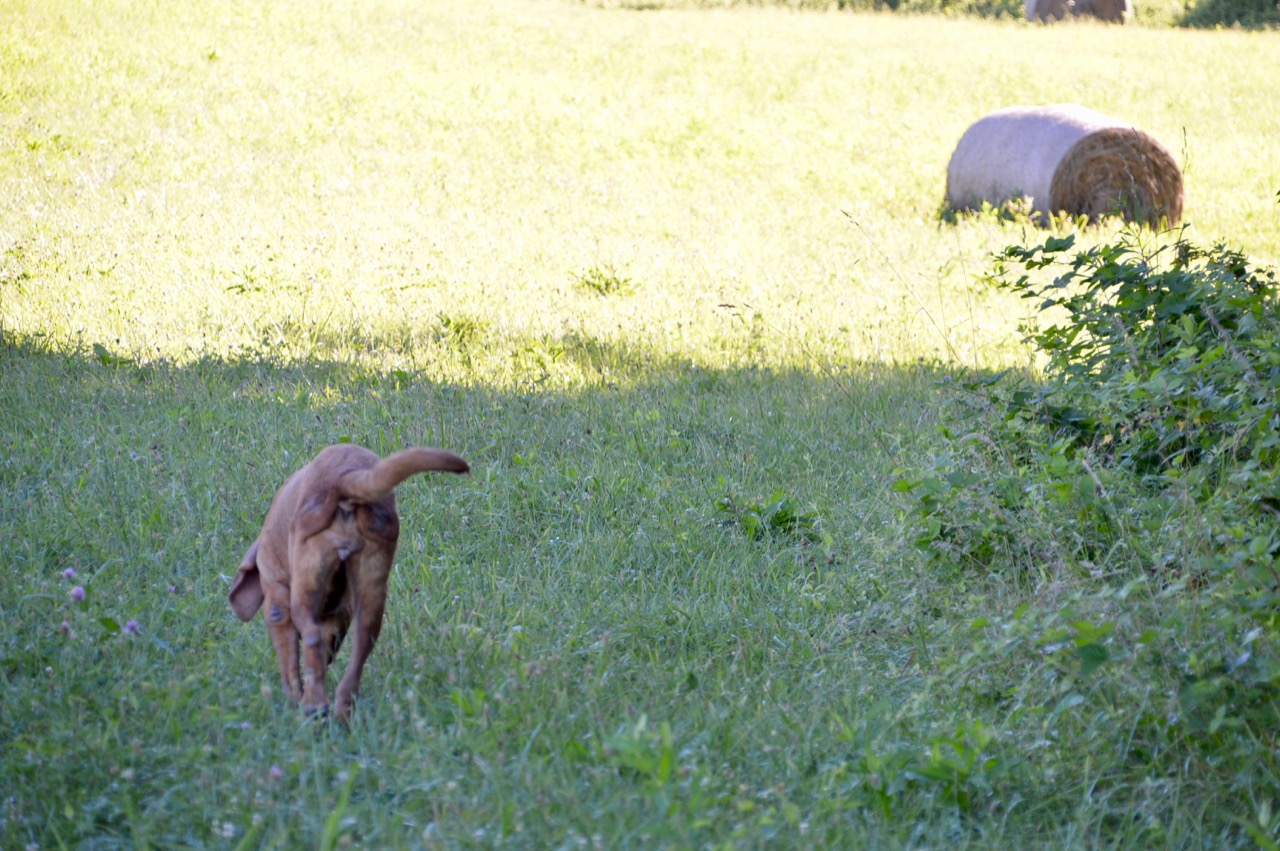 Since it was finally Saturday, after feeling it was for the past two days, I was also thinking about yard work since it looked like it was going to be a great day and nowhere near 90°. I've had it with all the weeds. The more I cut them with the weed trimmer, the more they multiply. So I decided I was going to go "pro" and buy the stuff that is so strong that 2oz of it in a gallon of water to spray on the weeds was what I was going to buy. 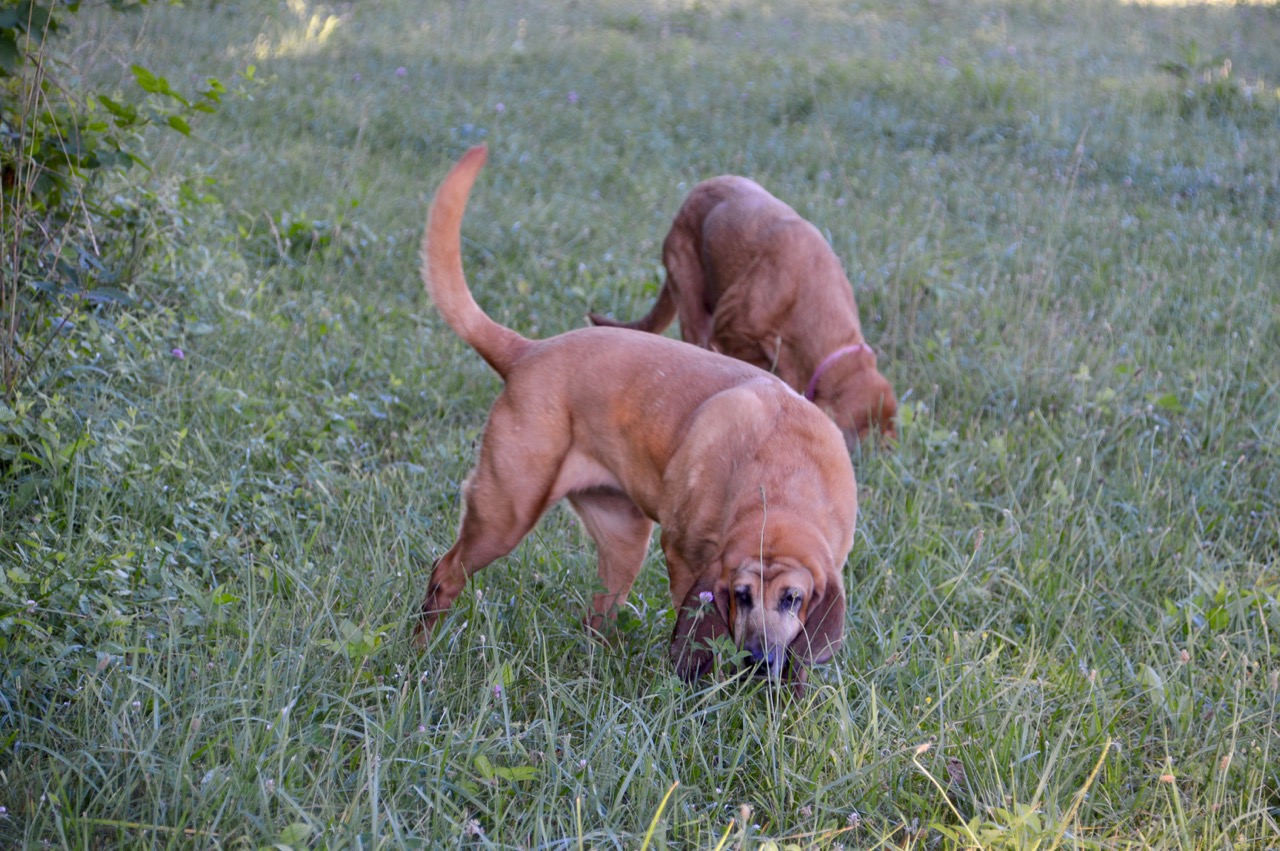 The hounds never go down along the driveway bank, the center of the driveway, and never down to the mailbox ... those were the areas I was going to spray. Plus I wanted to spray the left side of the driveway culvert. With my feet freezing and wet I was also going to look for a pair of rubber shoes ... I was thinking that I could find a pair at the local farm supply store. 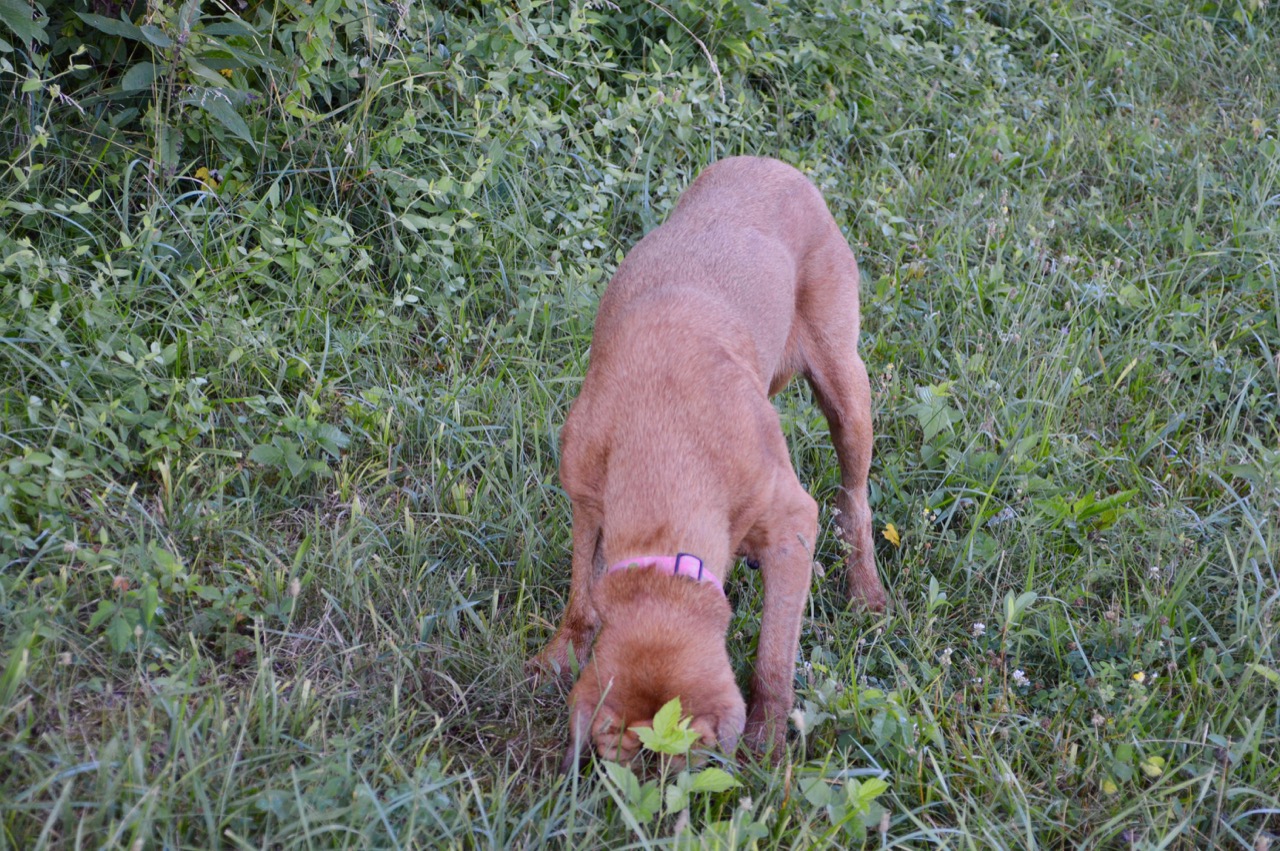 Remember in all of these photos, that Stella is the bloodhound that wears the collar, Sadie does not, until she makes a trip to the vet so I can use the 6' leash. Sometimes they are hard to tell apart. 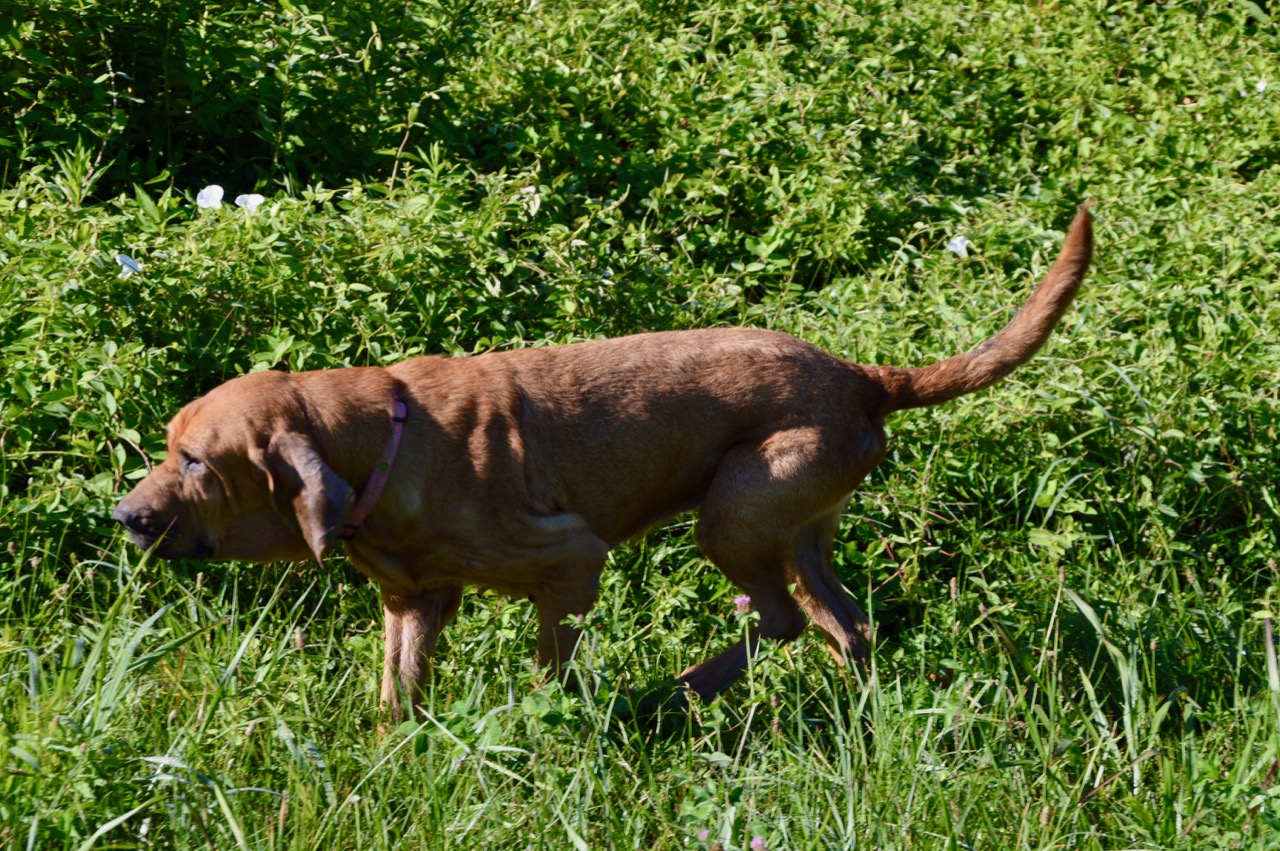 The more I thought about the yard I knew I had cut it too short the other day. It looks like crap yet every one of my neighbors along the highway cut their yards down to the ground or no longer than 1" tall. Obviously I have different types of grass than they do as I can also tell that difference in the winter when my grass is green and theirs is brown. 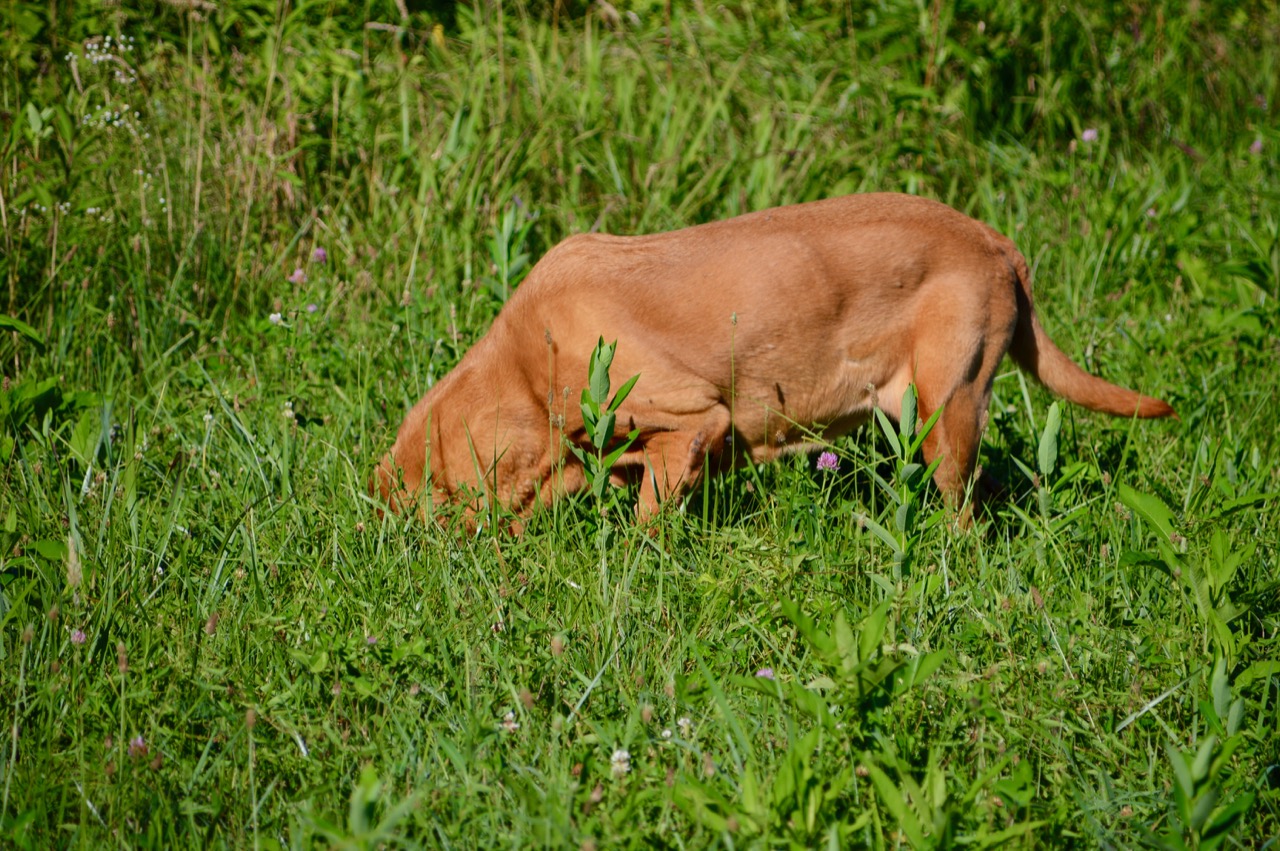 So the longer we walked, plans for today started taking shape.

Are you wondering about the 'visitor' I mentioned in the blog post title? 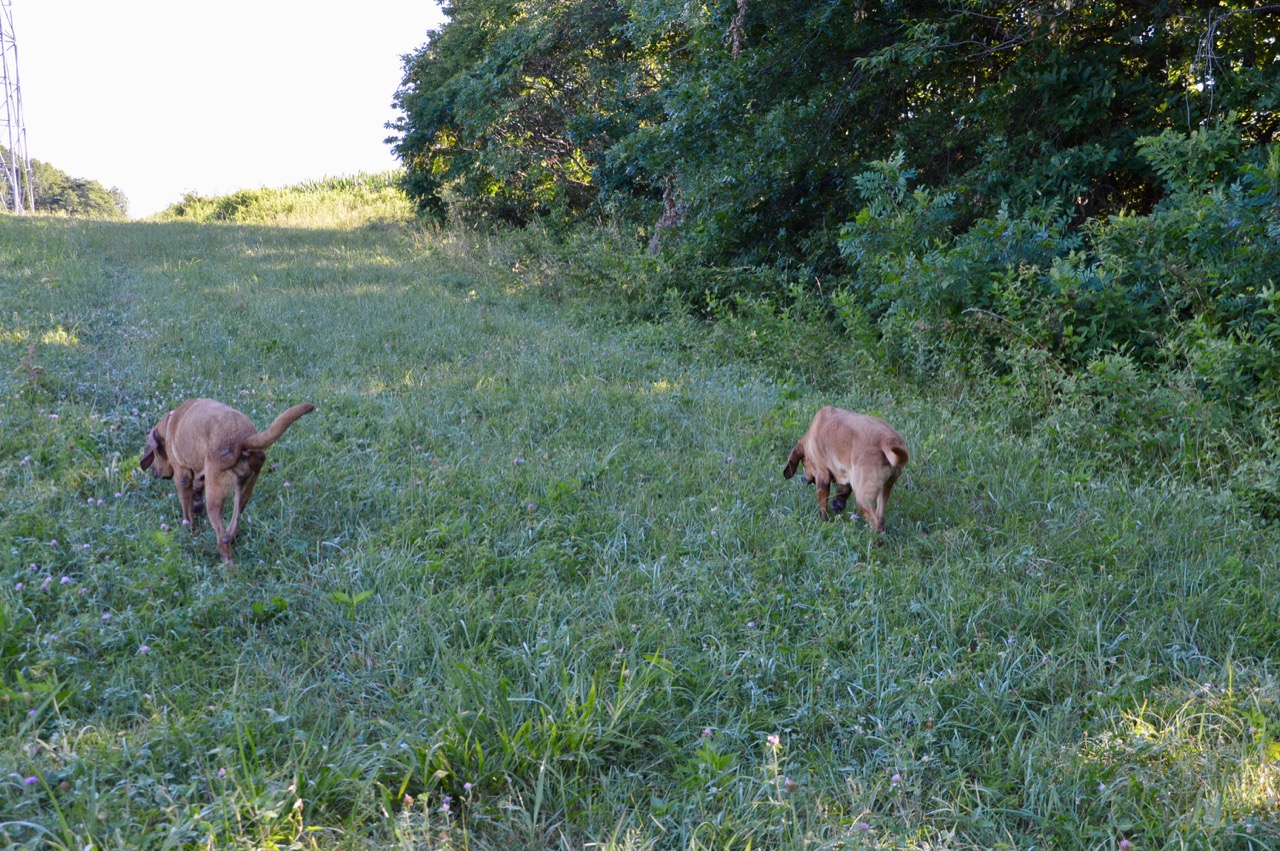 At this point of the walk there is nothing out of the ordinary going on. It has been so long that I can't even remember the last time I saw deer in the field. With Stella no longer running I can't remember if she even chased deer last summer and so far this year we have not seen any close enough to chase. Deer is usually our only kind of visitor that we run into in the field. 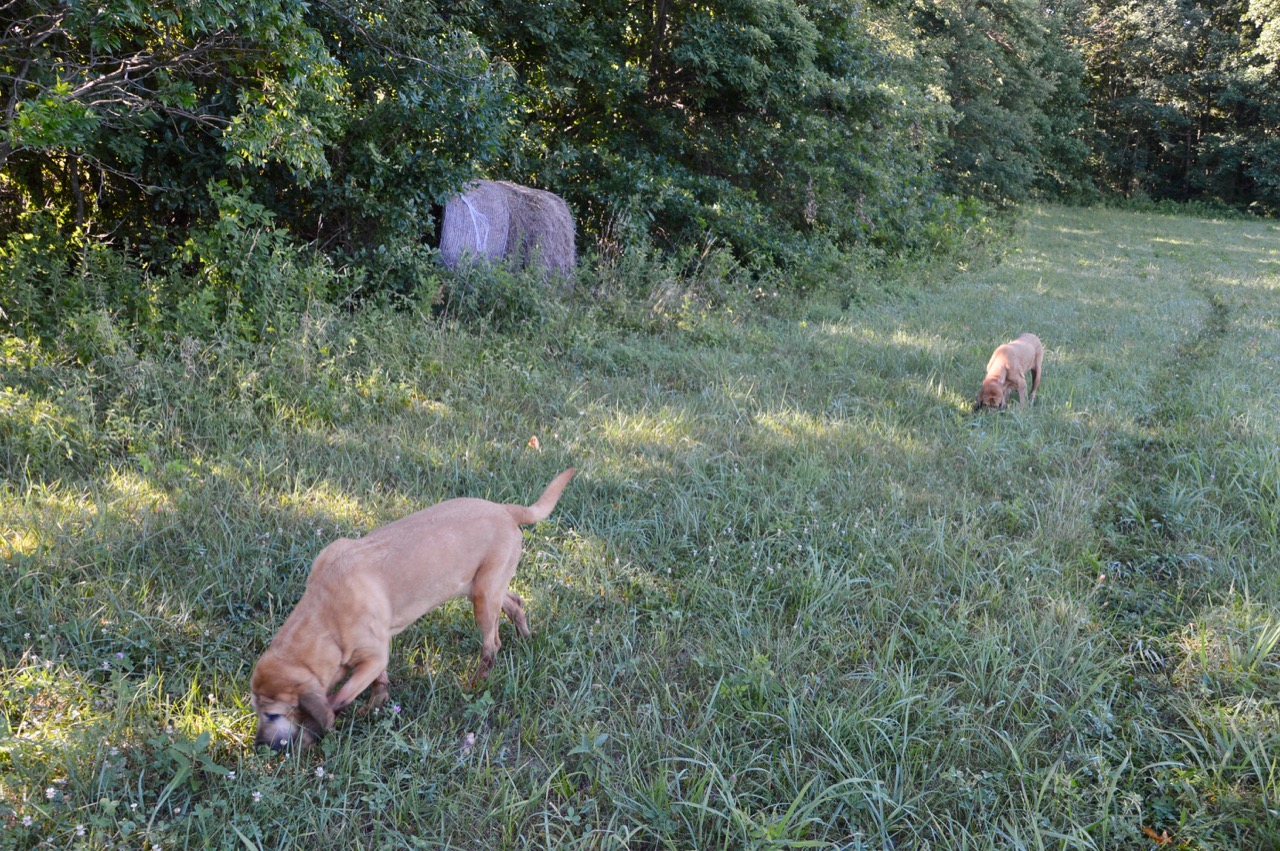 Not today though ... it was an entirely different kind of visitor. As I turned away from the hounds to continue my walk .... look who is staring at us. 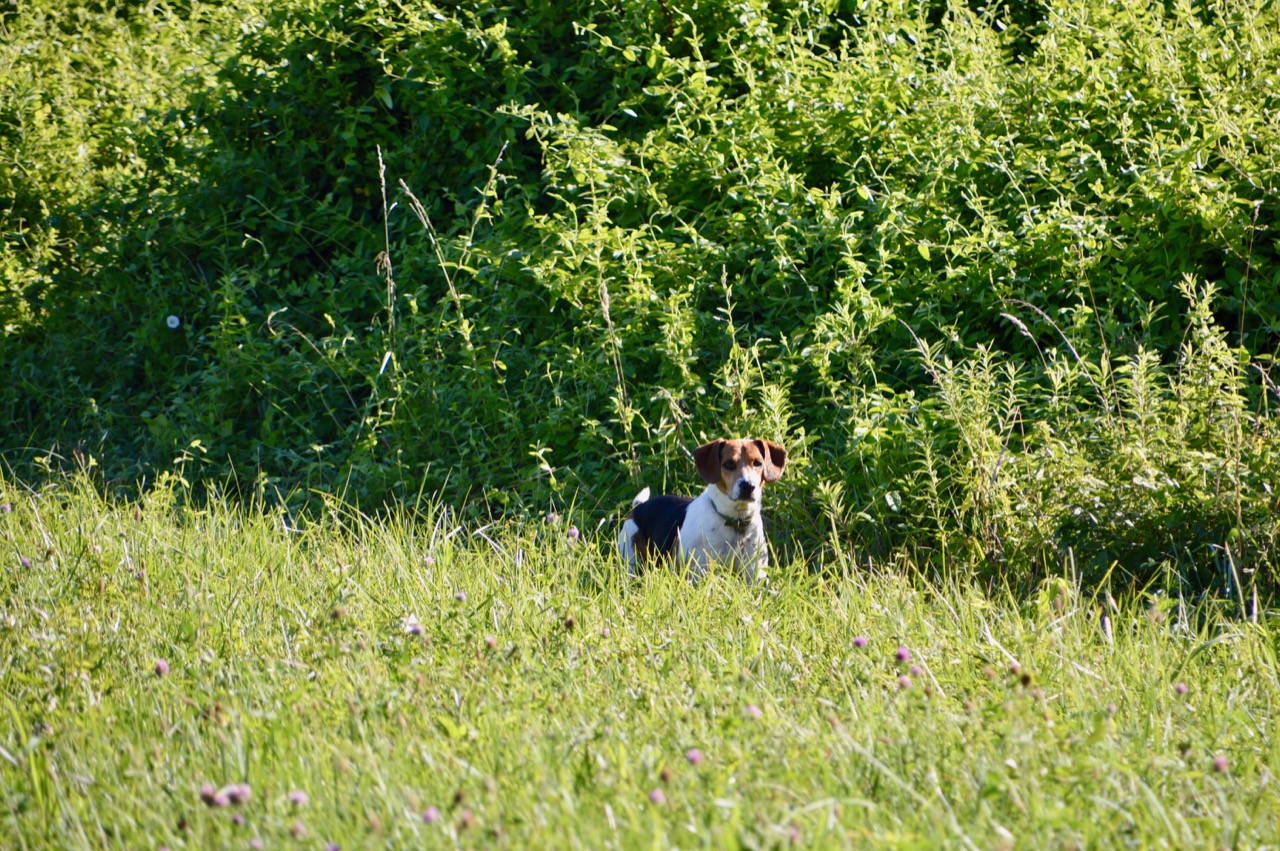 A great looking Beagle with a collar and tags. A hound that I had never seen before but obviously a possible neighbor. He/she stood motionless looking at the hounds. My immediate thought was I had better get ready to run because I was positive the bloodhounds would be sprinting within seconds. 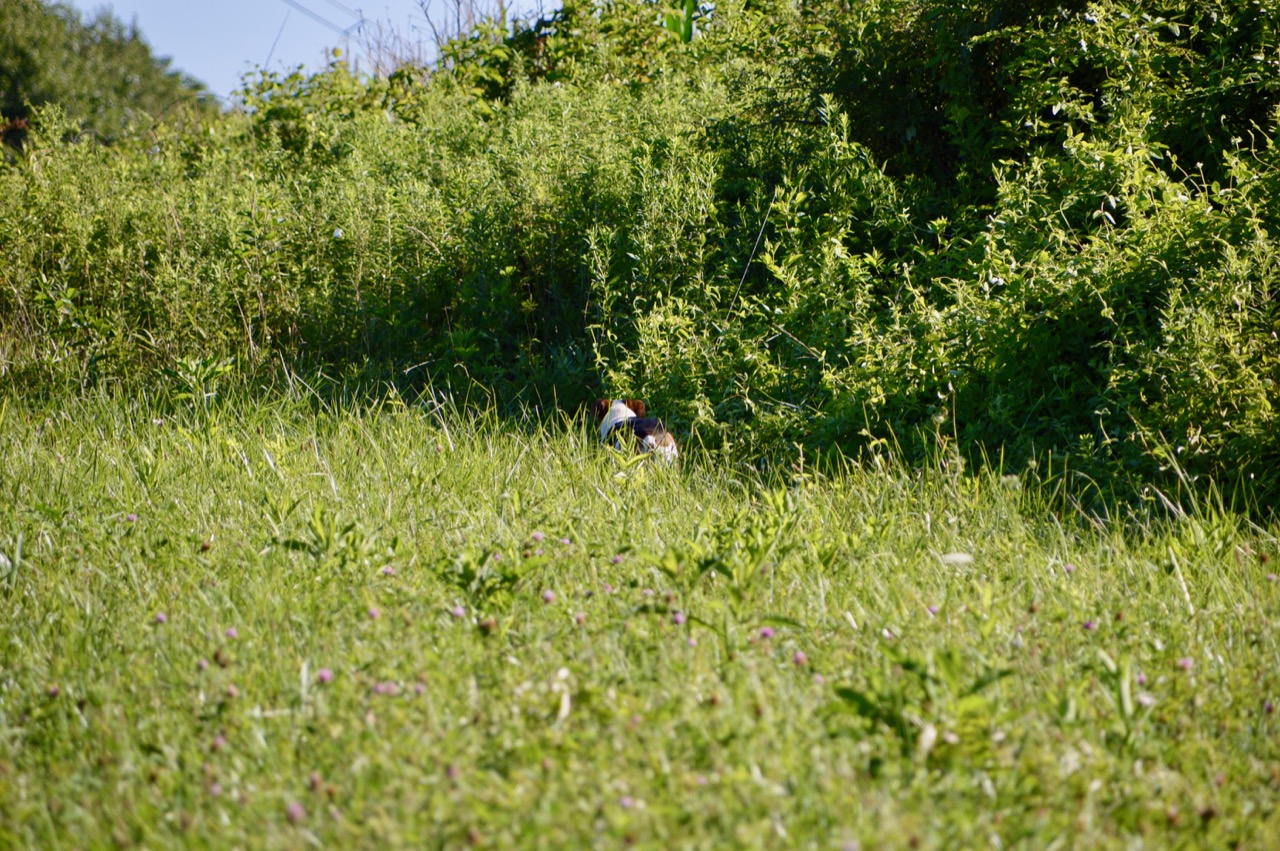 Just like a split second the Beagle takes off for the house it came from. It's short ears were flying and it was running as fast as it could. Where was the bloodhound baying I was expecting  to be hearing and the blur of reddish hound hair flying by me after the Beagle ??? 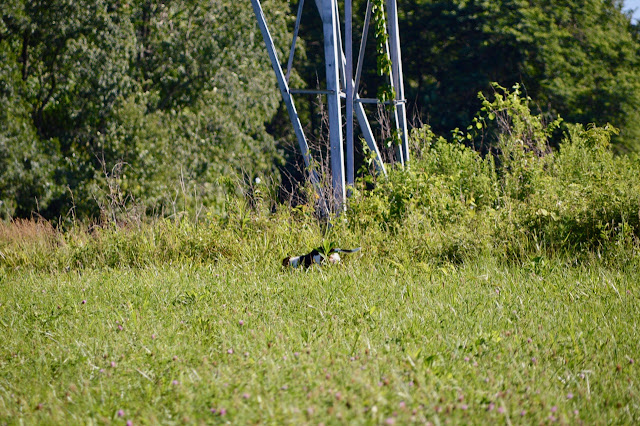 No sounds from Sadie or Stella. 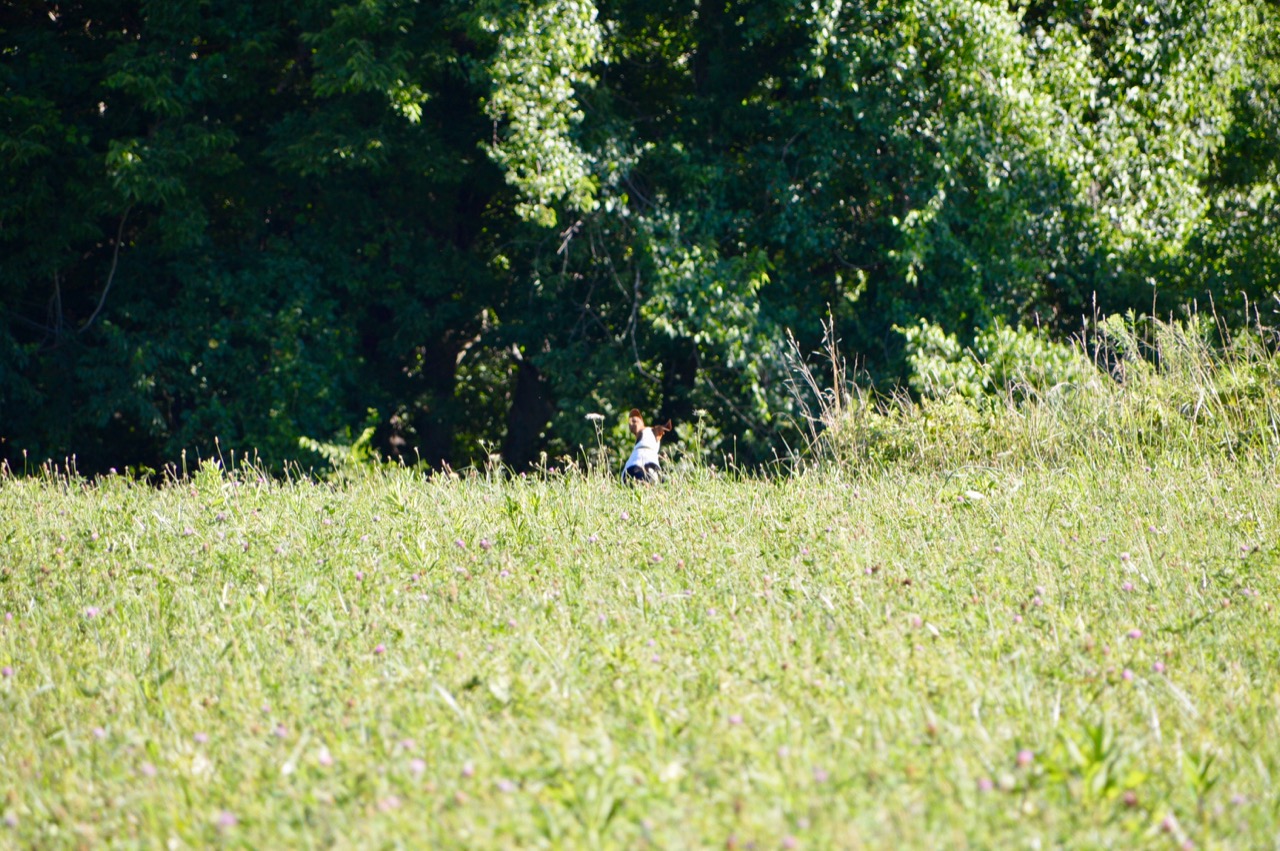 Once the Beagle was out of sight I turned to check on the bloodhounds ... they had not moved an inch the whole time !!! 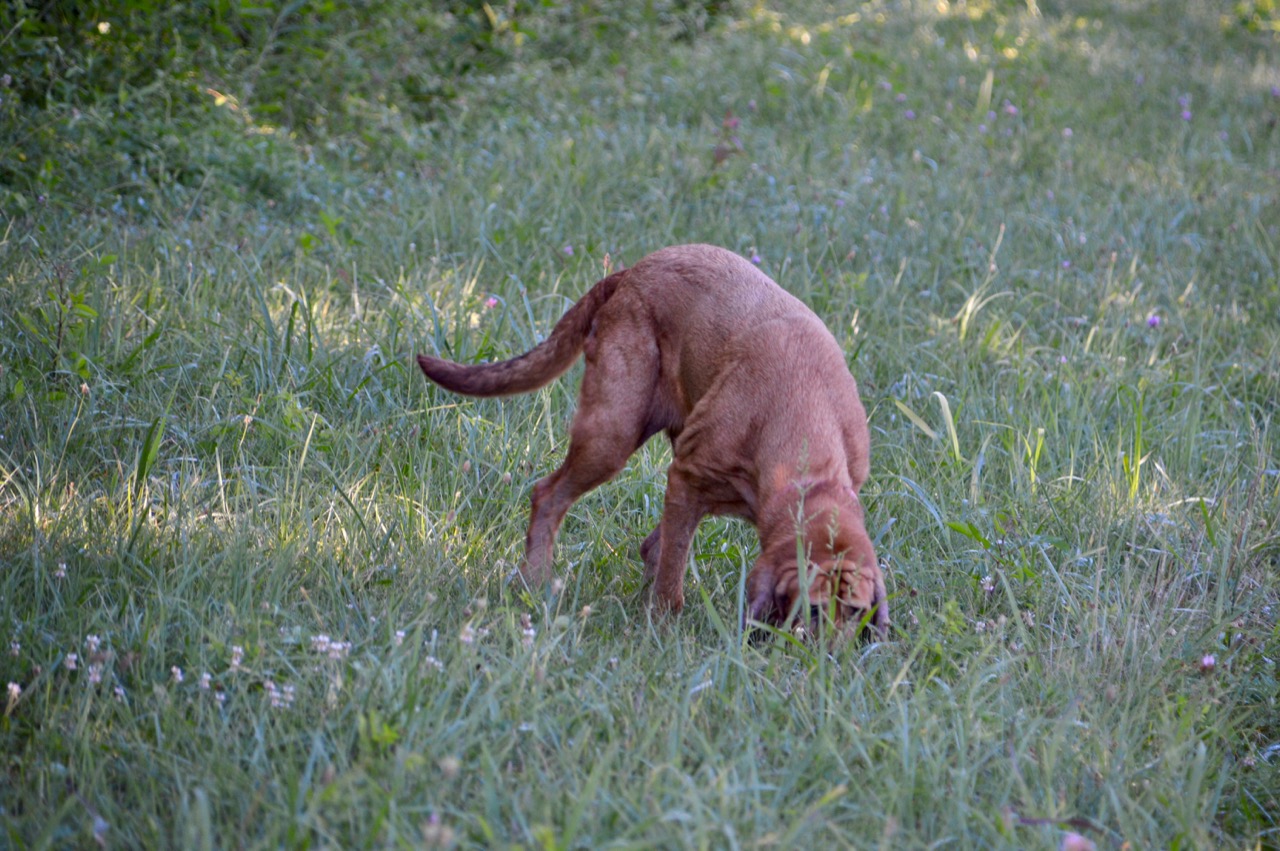 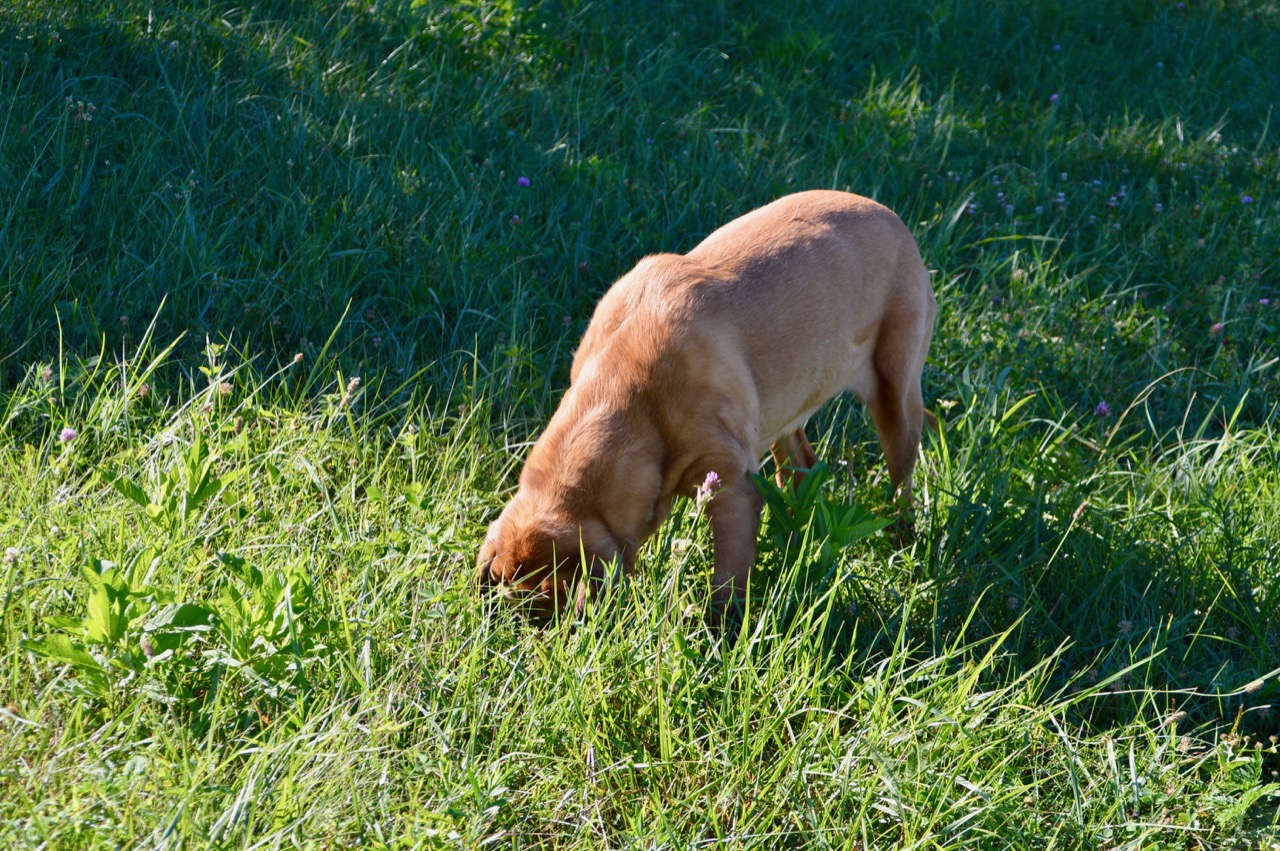 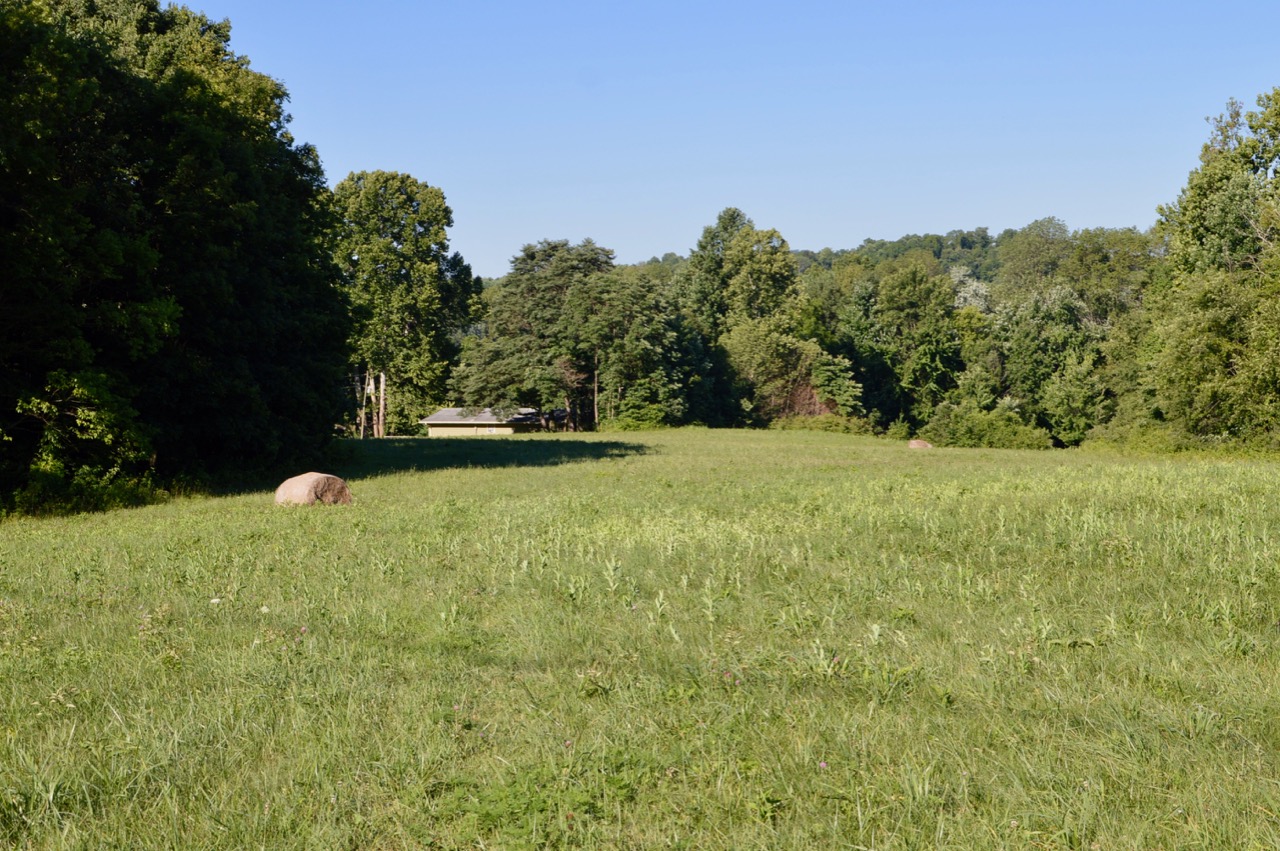 It didn't matter to me what they were eating today. All I know, the day was beautiful and I didn't have to chase the hounds on the run into the north woods where the Beagle was headed. 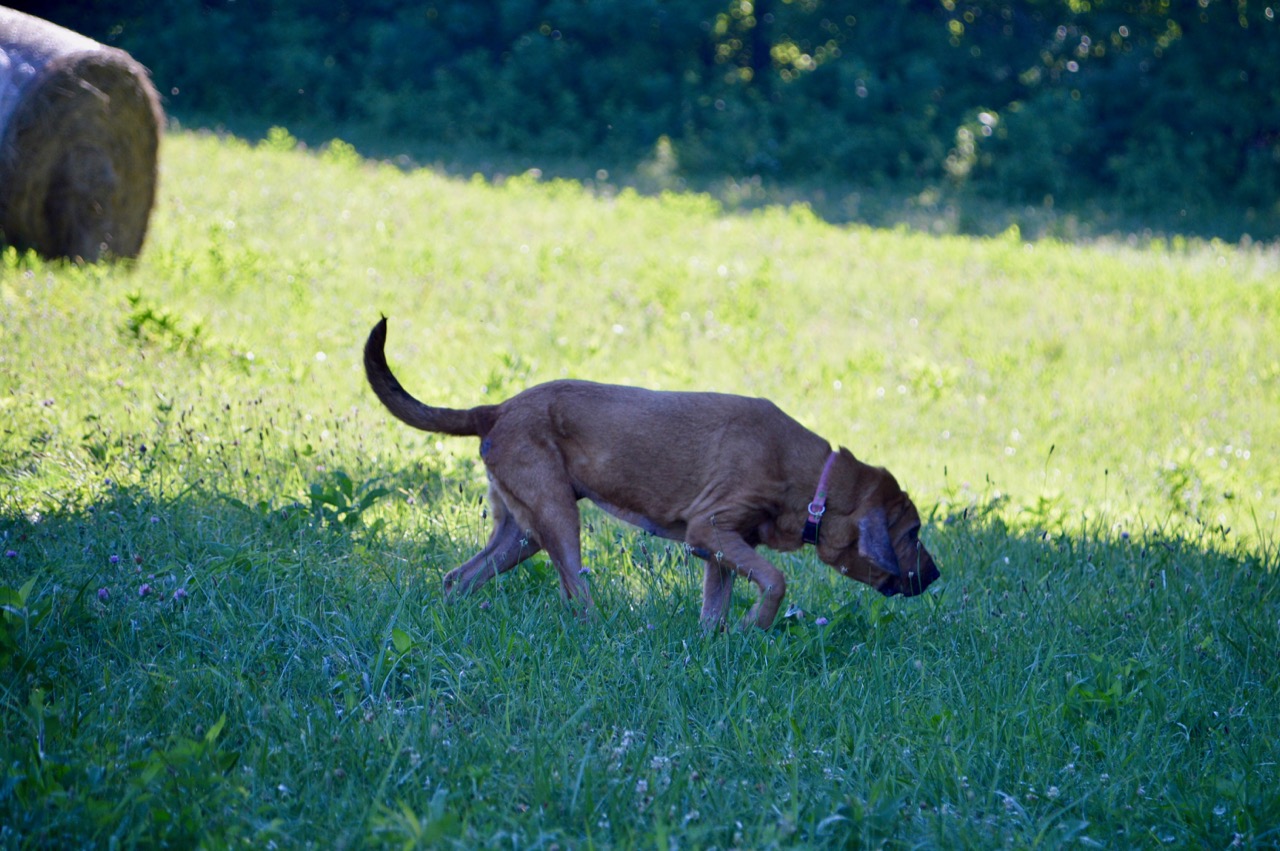 Stella took her time to get home. 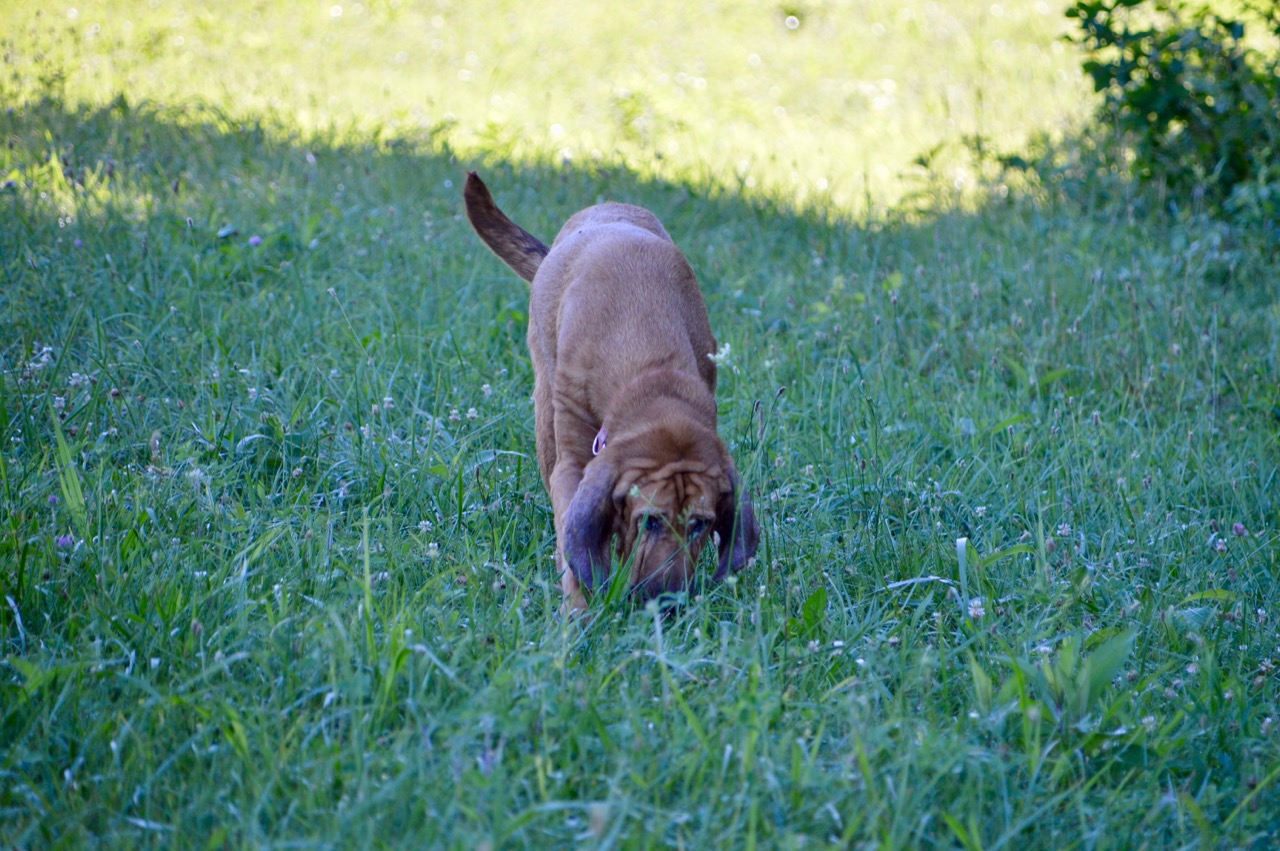 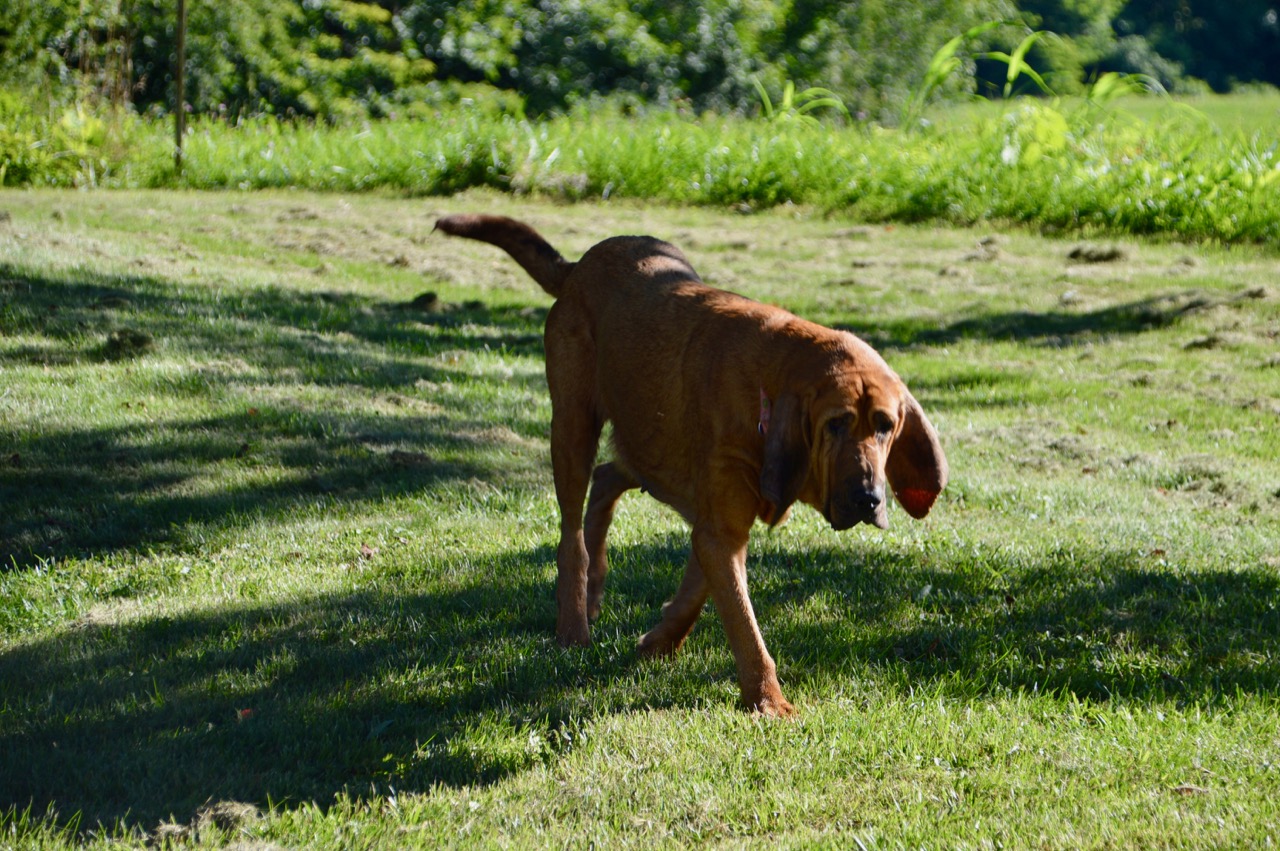 You may have noticed with all of the photos this morning the tint is a little different ... I changed the setting back to 'automatic no flash' from 'landscape' so the photos wouldn't be so dark. 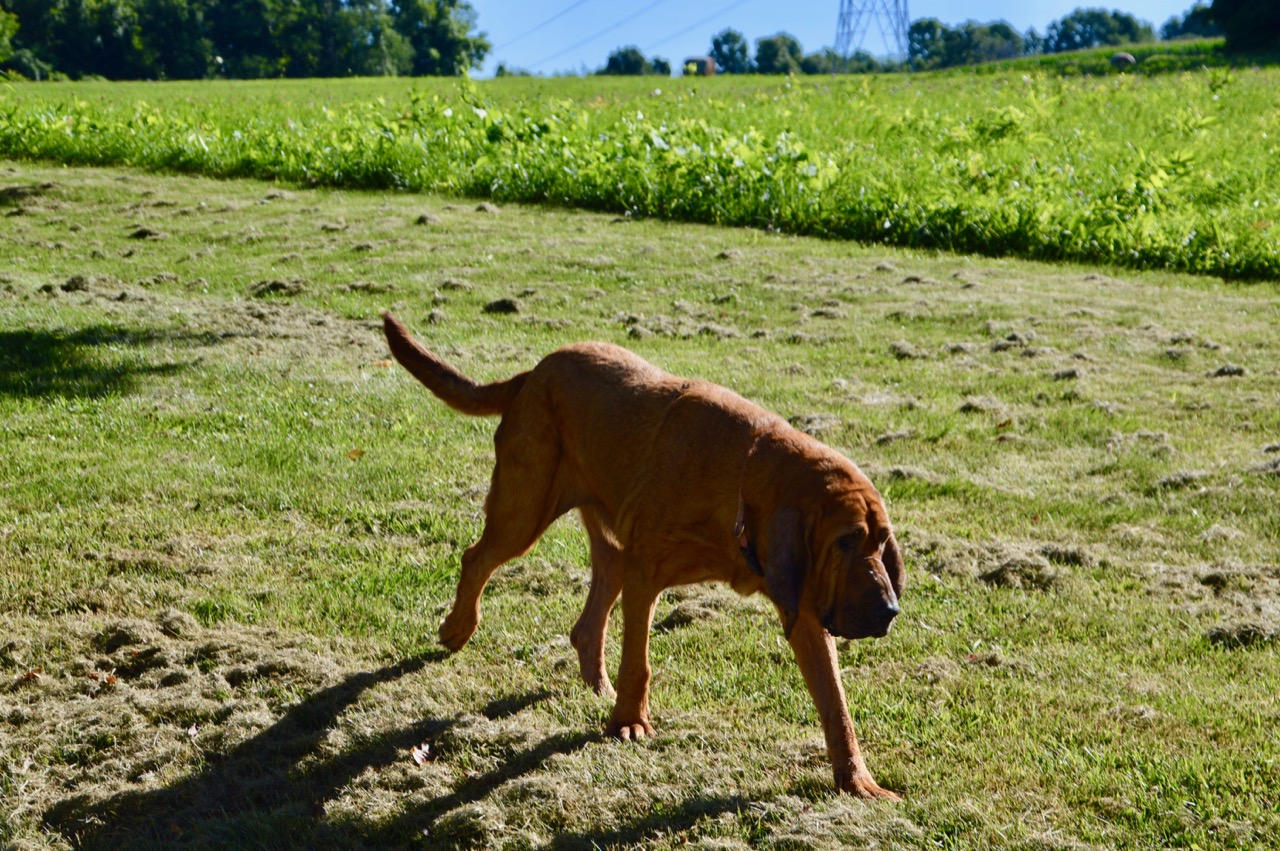 As you can tell I am not happy about the yard. Besides the clumps of excess grass from cutting it a notch lower or about 1-1/2" I have thought all year from the first cut in the spring that my blade needed sharpening. I don't have a shop or bench to mount a vice so getting my blade sharp on my own wasn't going to happen. The local hardware store gave me a quote of $10 but since it is the middle of the summer the line is long to get anything done dealing with mowers or blades. 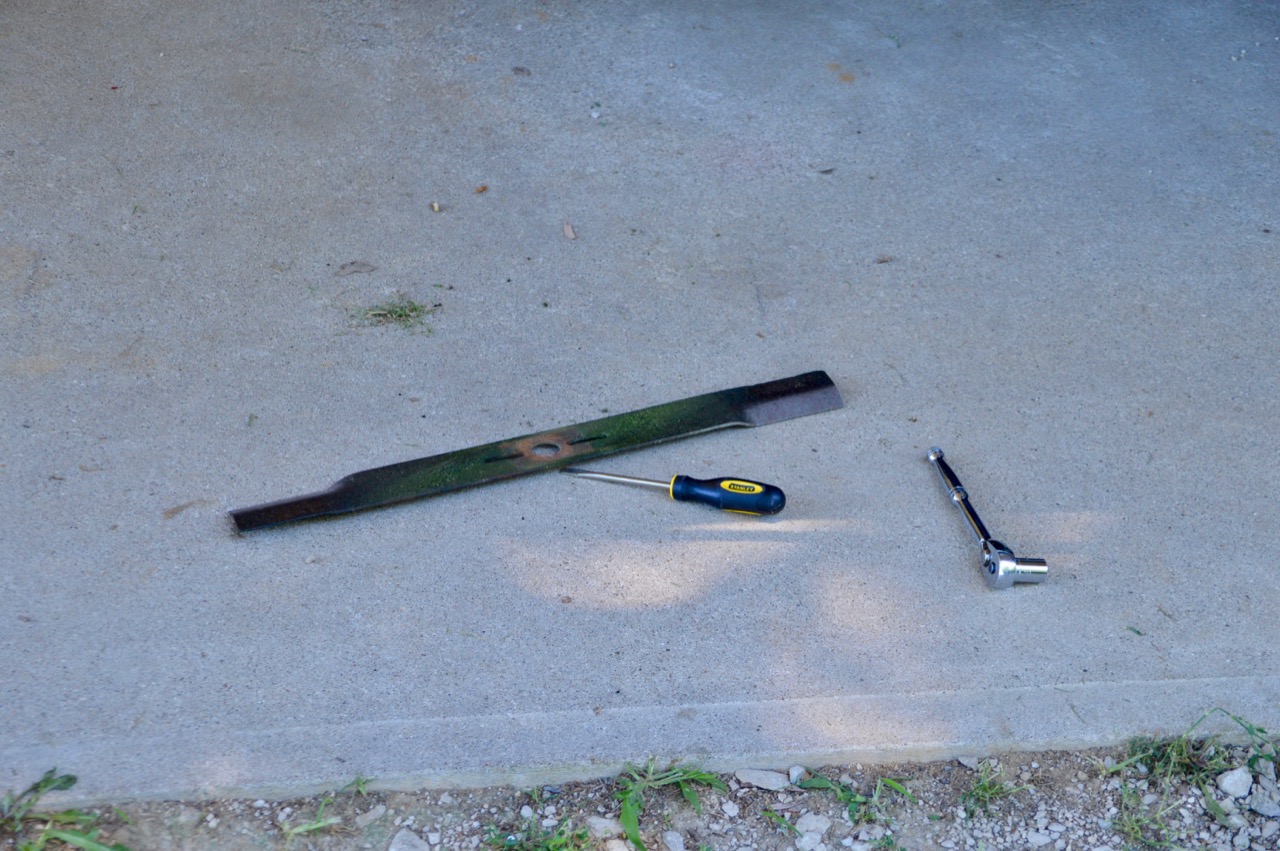 So while I was at the farm supply store, name left off intentionally, wandering down the aisles admiring their large inventory .... I came up on a new blade that not only was the correct size but even mentioned the brand name of my mower "Craftsman" ... I was in luck for $12. 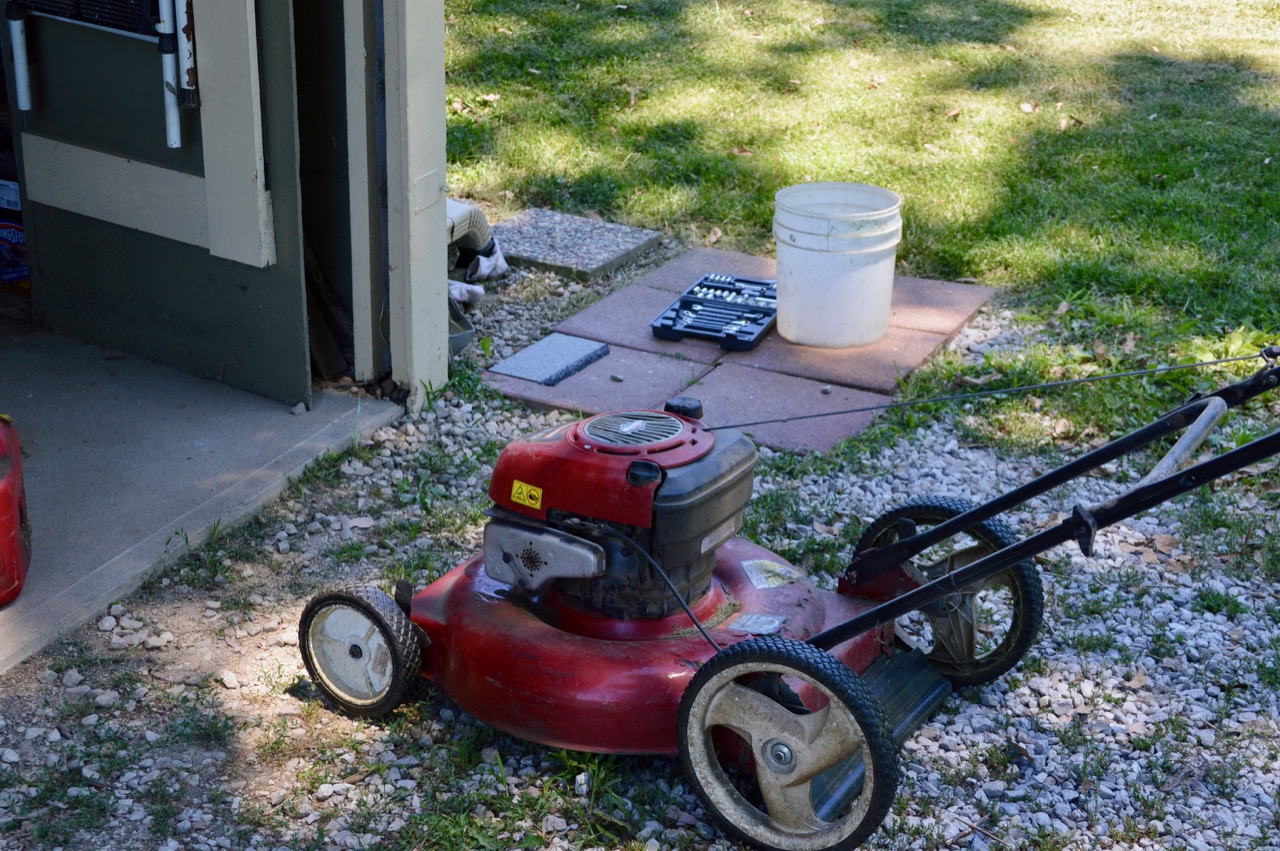 So with the '6hp Monster' having a nice new sharp blade I had to try it in the backyard ... that led me to mow the whole backyard. Not only were those clumps of grass disappearing but the grass was being cut better than it had all spring and summer. 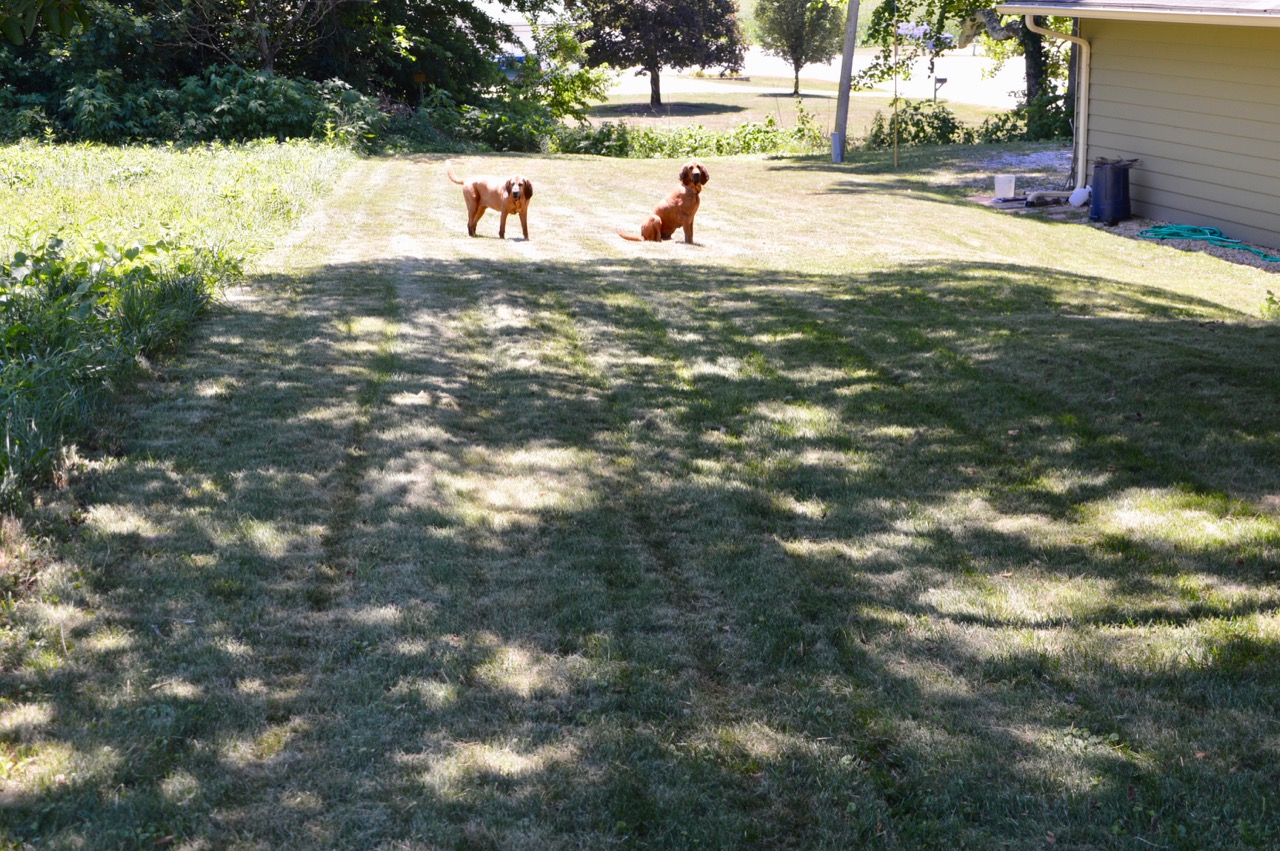 Sadie and Stella were more than ready to inspect the yard and gave me a thumbs up. I knew there was a reason I didn't want to rake that grass the other day. 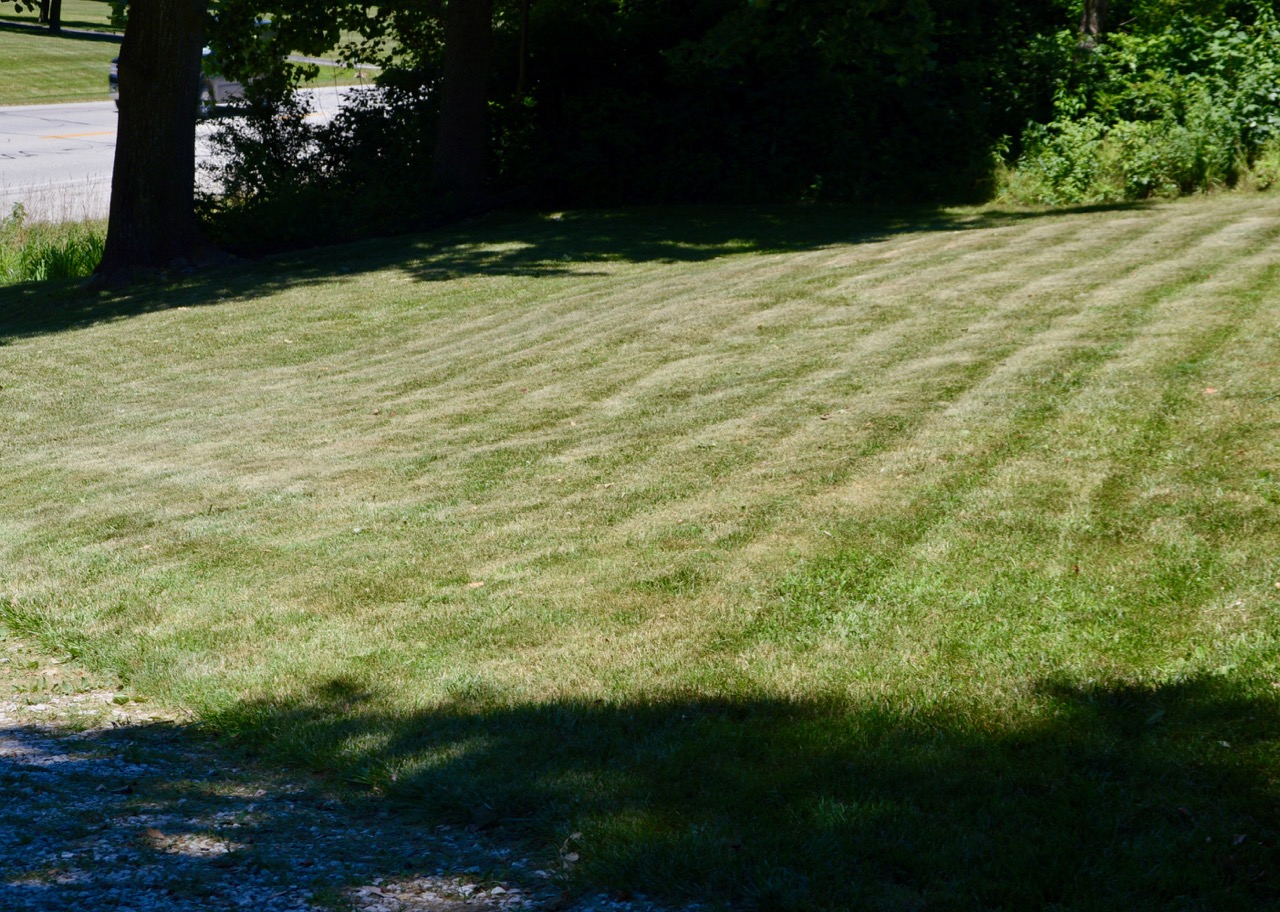 With the same problem in the front yard I decided to mow that also. I mowed at an angle, a different direction than I did the other day. It was also the best cut I have had all summer. 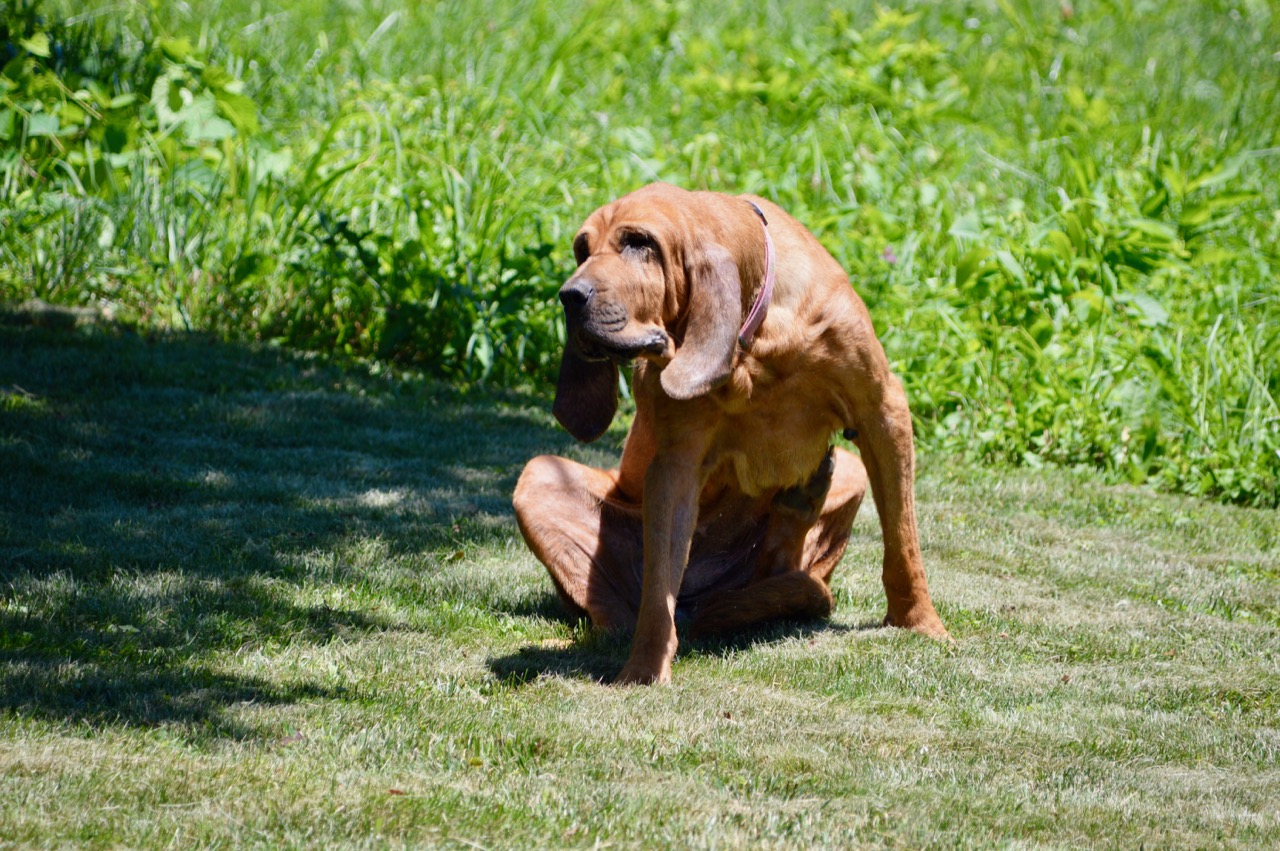 Stella was good again today while I was gone. I believe her problem with separation anxiety is finally over. Whenever I say "I've got to go" ... to buy groceries, to the library or to buy dog food ... she will walk into the bedroom on her own and lay down because she now knows that is where she stays when I am gone.

Where was Heidi during all of this beautiful weather??? Where she always is ... stretched out as long as possible on the couch sleeping. In fact she was sleeping when I drove the store and was still sleeping when I walked into the house when I got back ... some watch dog.  LOL

So after all the time I spent mowing, pulling weeds out of the mulch beds, weed trimming and spraying weed killer on the bank and driveway ... it was time for a shower, 600mg of ibuprofen and a 32oz glass of ice cold water ... I put this post together from the MacBook Air, sitting on the couch enjoying the Reds game at Wrigley Field.

Oh, I didn't find any rain boots or shoes at the farm supply store but saw a lot of Carhartt clothing on sale.