The Hounds Enjoy My Retirement 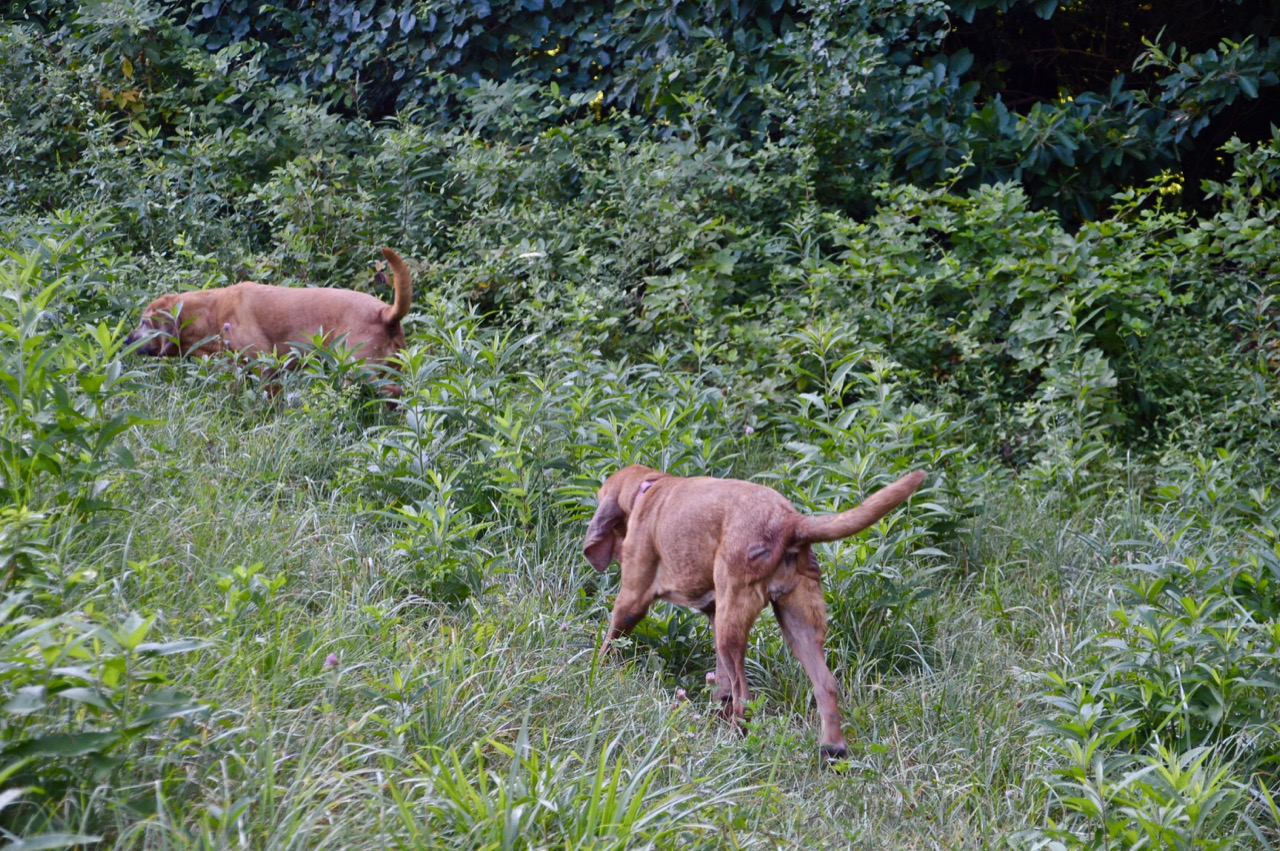 I couldn't come up with a title for this post this morning. That doesn't mean I can't put a post together and give it some time to 'simmer' and hopefully the day will come up with something to put in that title block. The rain did not show up again yesterday, while my friend in Chicago told me she had 2" in less than 15 minutes yesterday. We are a few hundred miles south of Chicago. Like always the bloodhounds lead me outside to start a new day. If it weren't for them I wonder if I would take as many walks per day? I think I would. 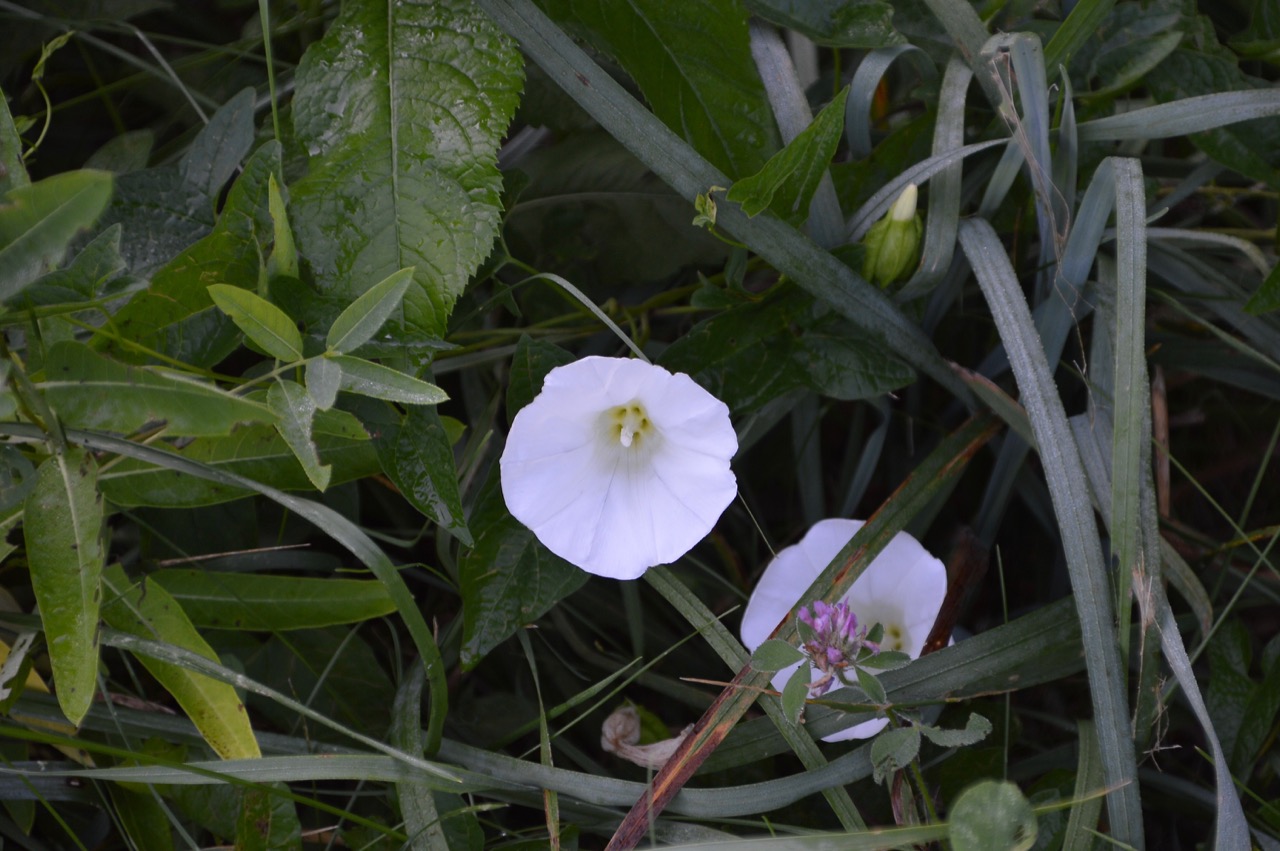 I still think this is the prettiest flower in the field, no matter how dangerous it is. 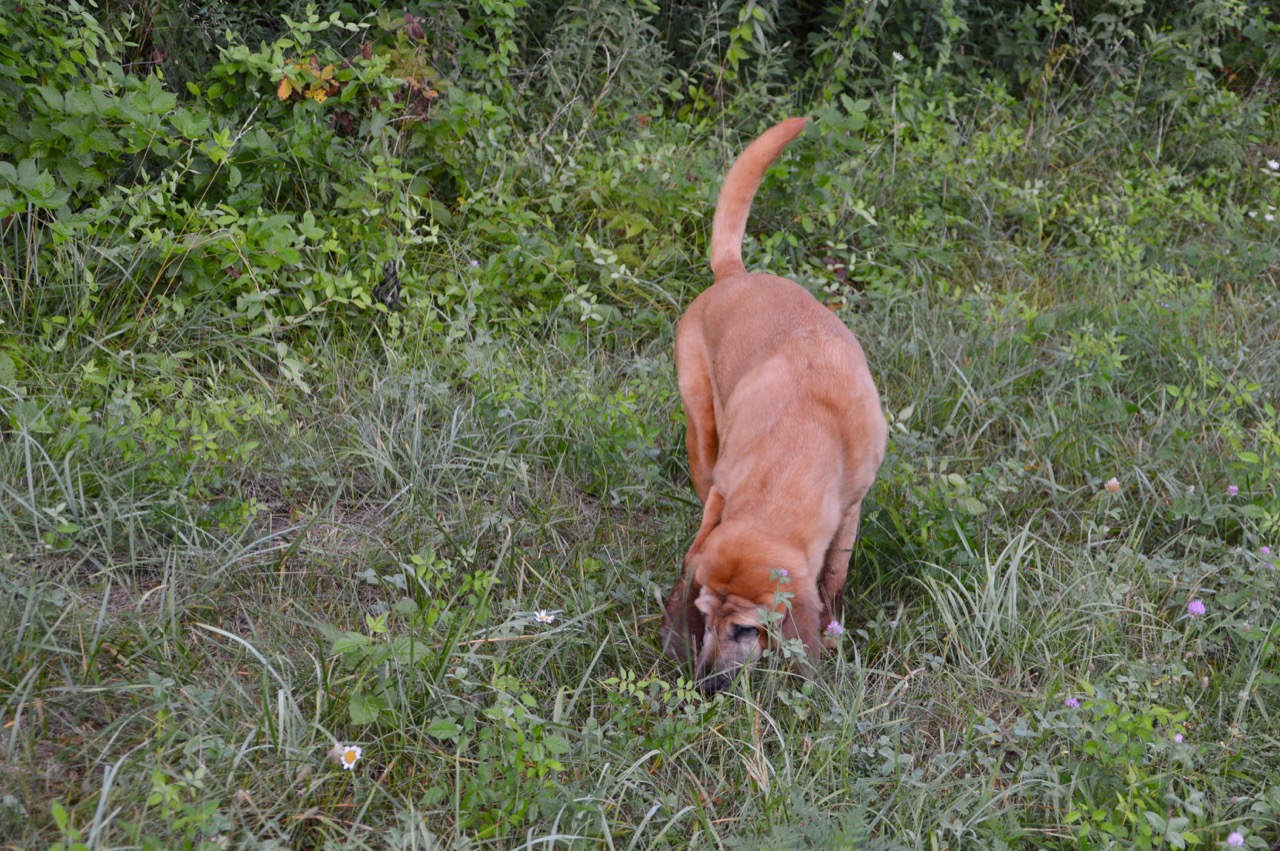 I felt on Sadie's right side this morning, no change. It's not gushy with fluid, it's not hard like a rock, it's a bit smaller in area and it feels just like it would if you felt her stomach ... there's still a small lump. 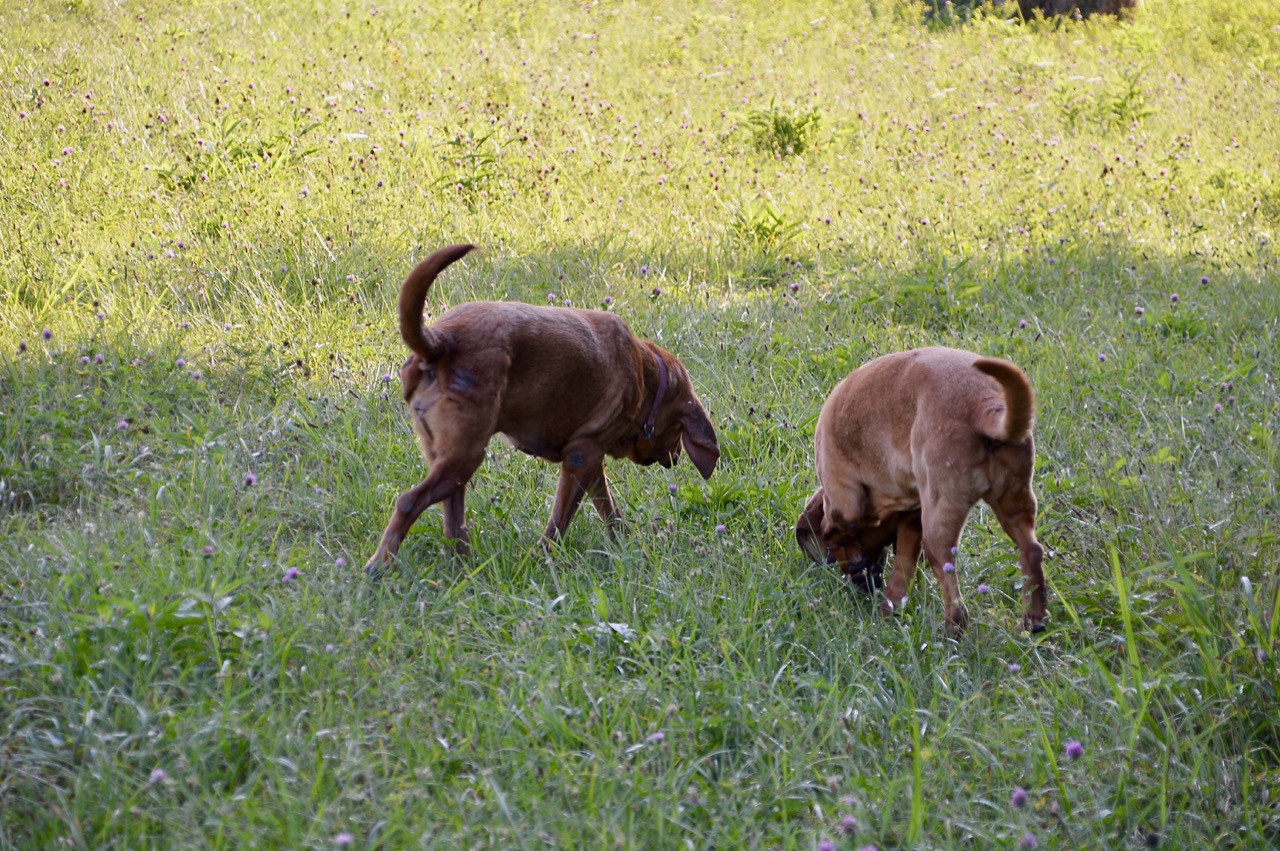 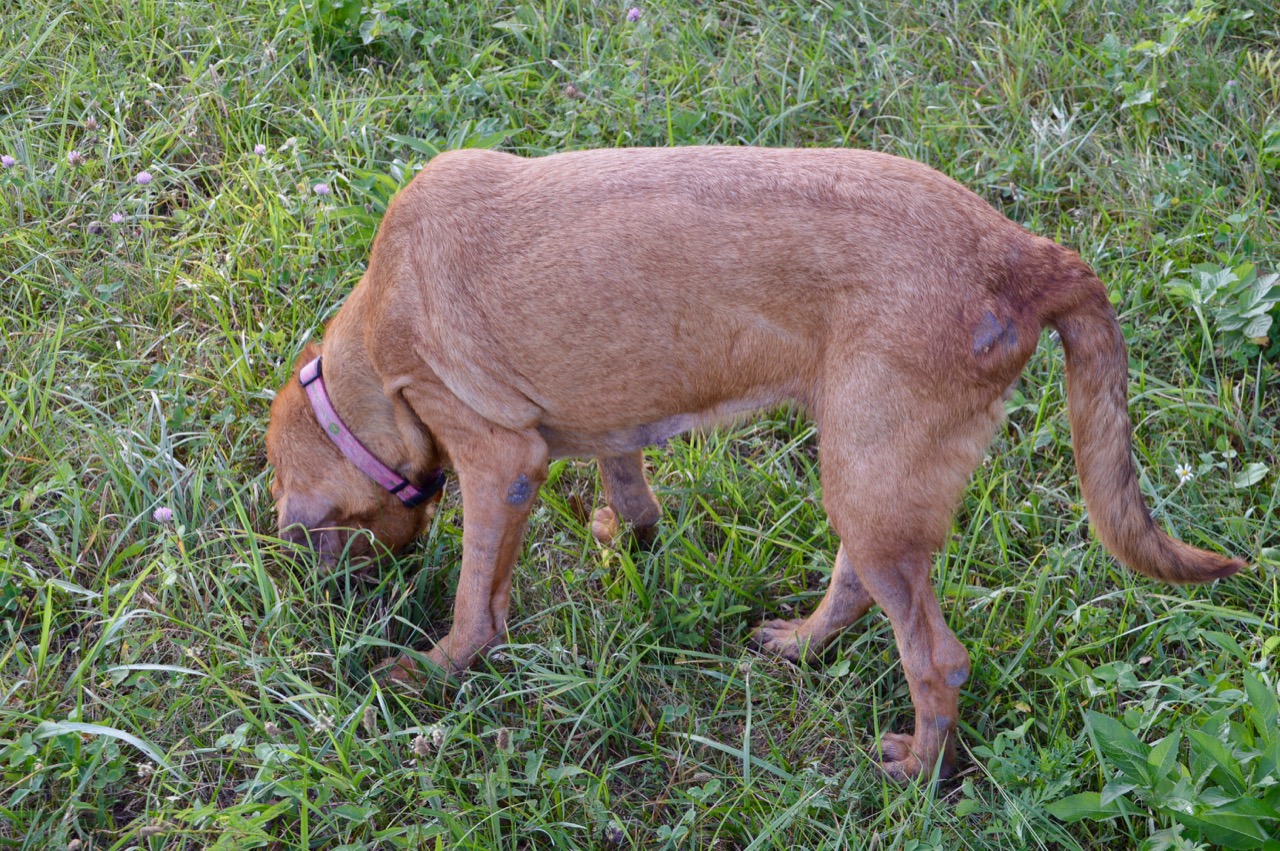 I have a new container of K9 Creme that I am going to apply on Stella's elephant spots. Hopefully that will work and it will show if it does or not in the following blog posts for the next few weeks, maybe months, or longer. 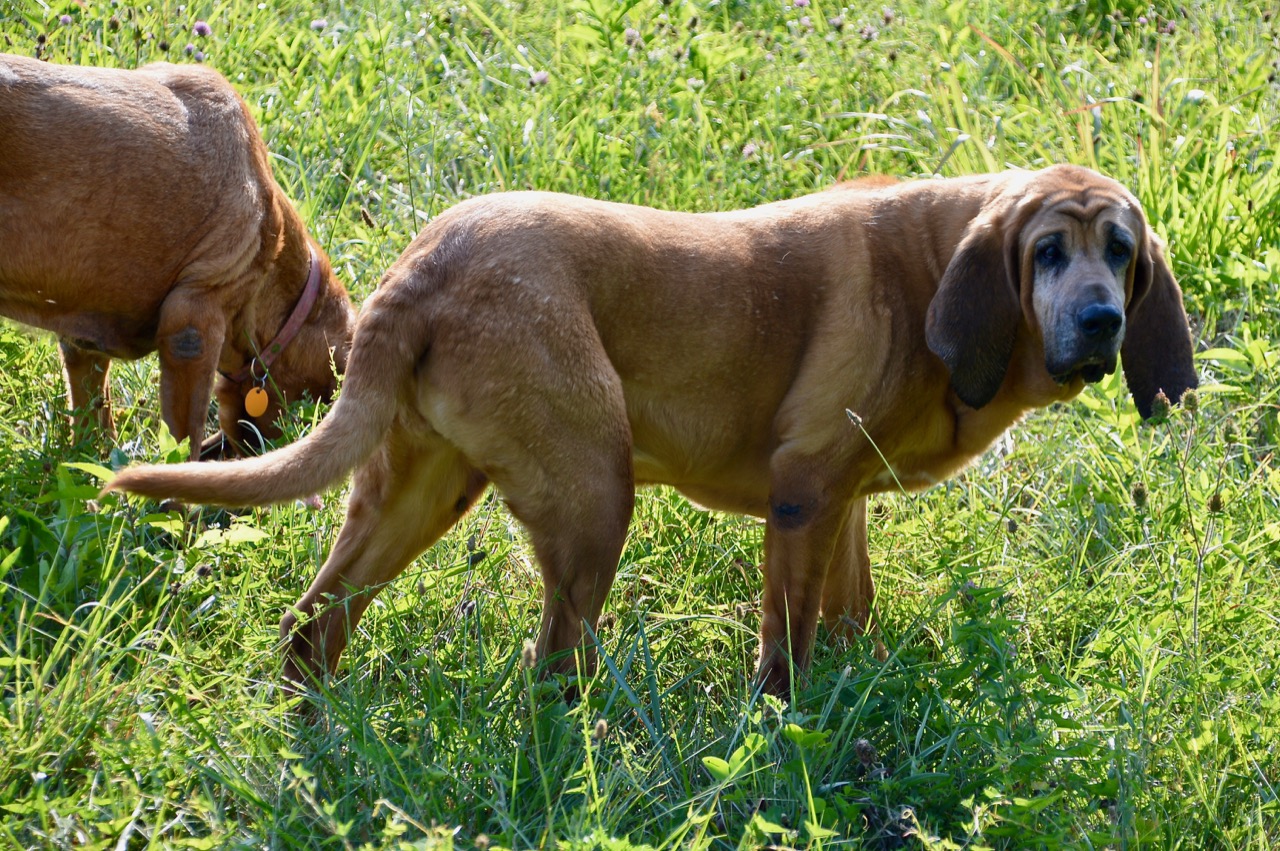 Here is the only photo I could get of Sadie's right side ... she wasn't thrilled about it. If my eyes are focused correctly, I can barely see that fatty tissue ... can you? 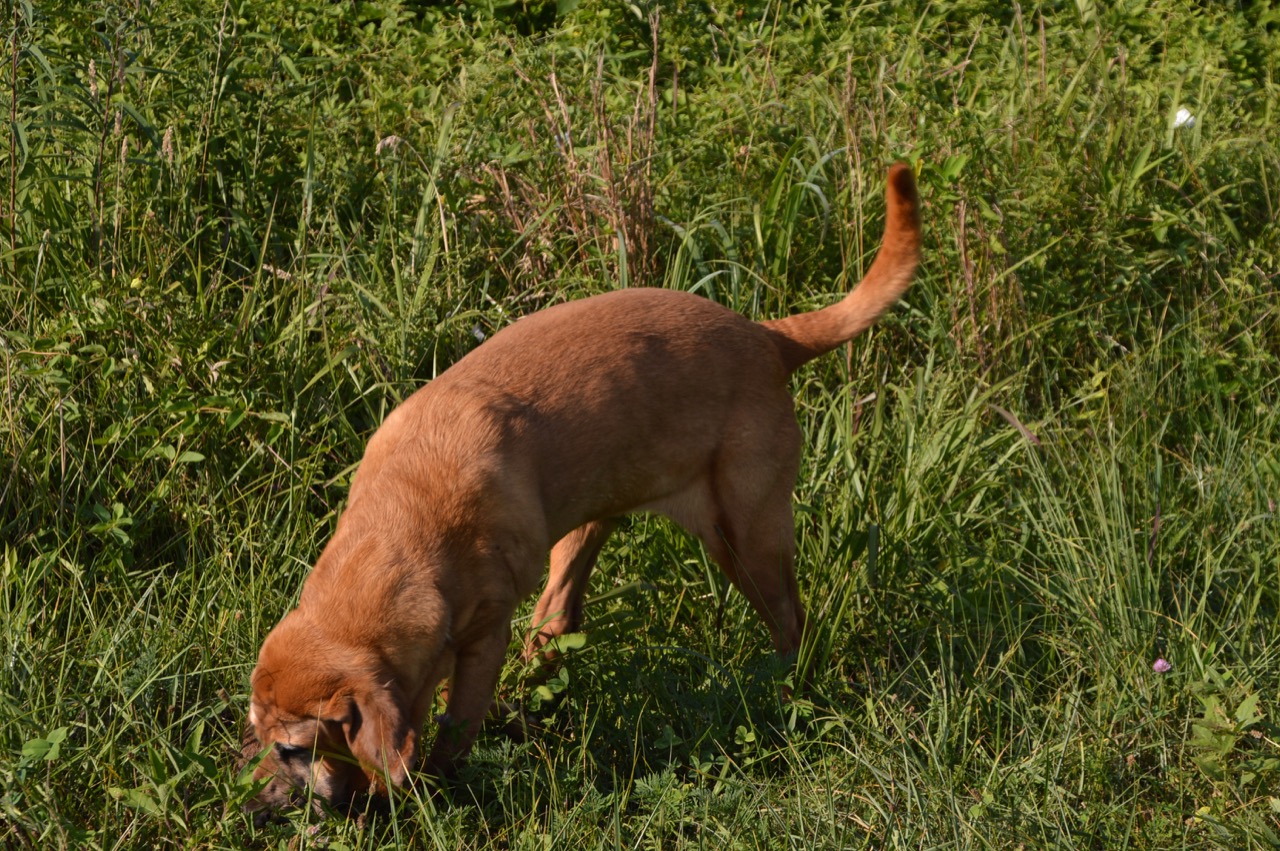 With the morning temps in the mid-70's, it was nice and cool each time we walked in the shade. When we made the first turn, a slight cool breeze hit me from the NE ... I could tell it was going to be another nice day here in 'the tropics' ... you cannot beat summer weather like this. The Farmer's Almanac predicted it would be wetter than normal this summer ... 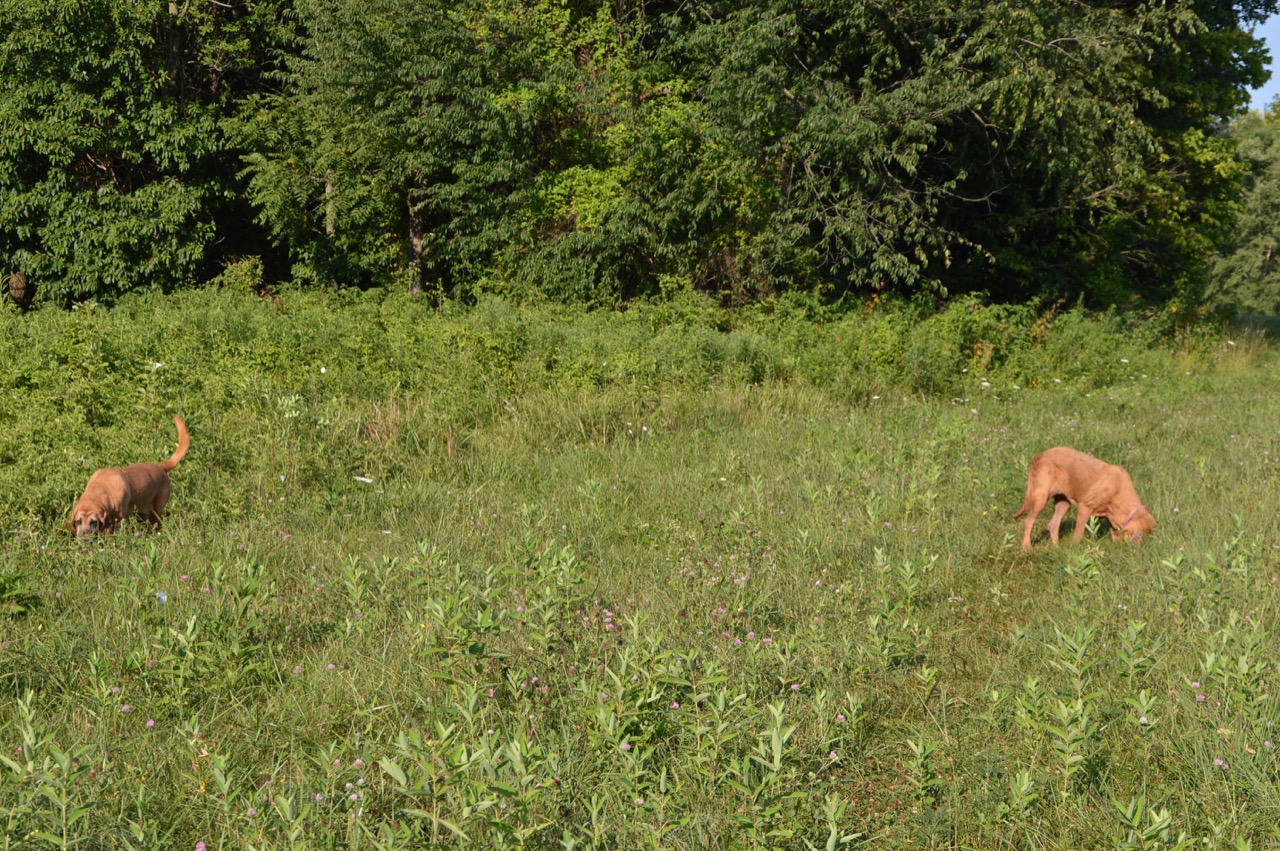 If you are wondering, yes I did have to backtrack and take a hold of Stella's collar to get her to move. She was in the same position you see even after I grabbed her collar and refused to move. She didn't growl ... just didn't move. 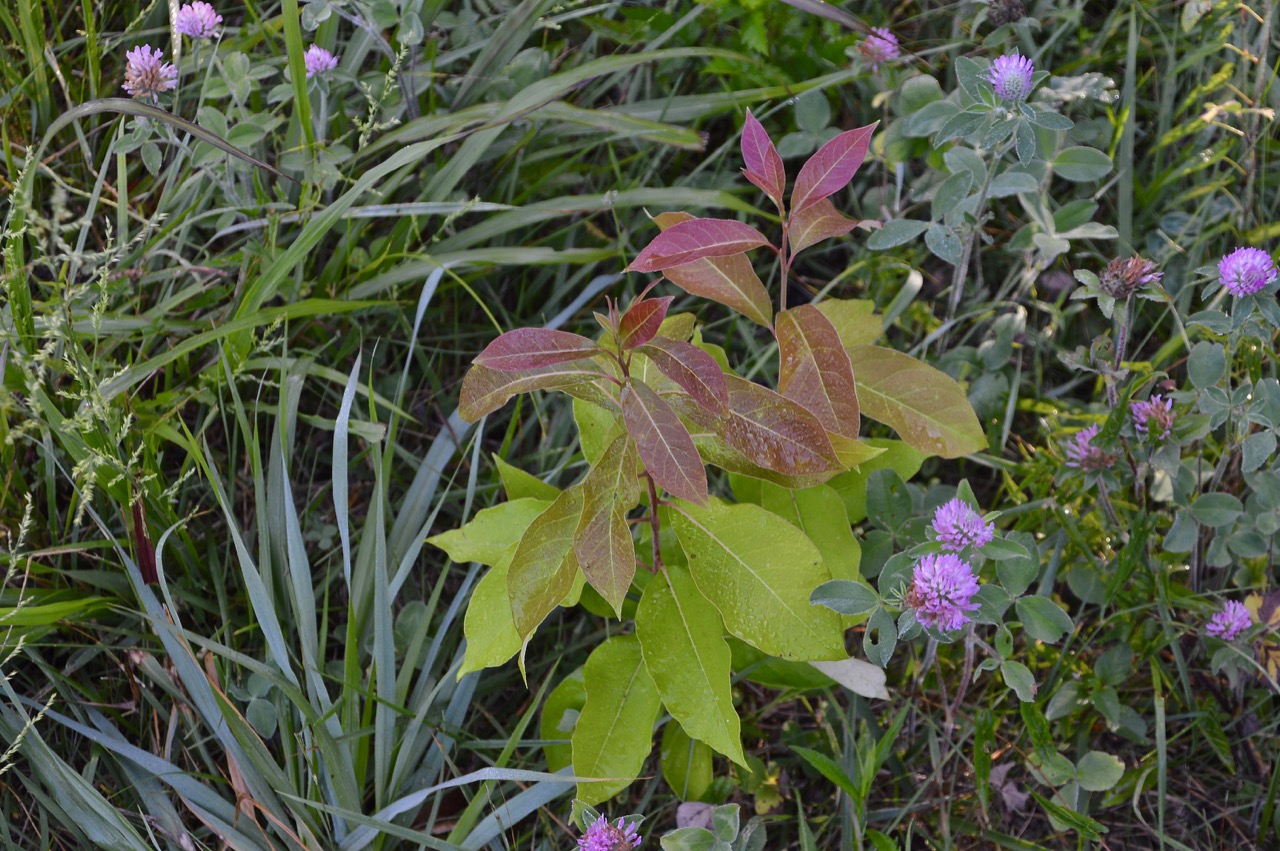 A little color in the field. 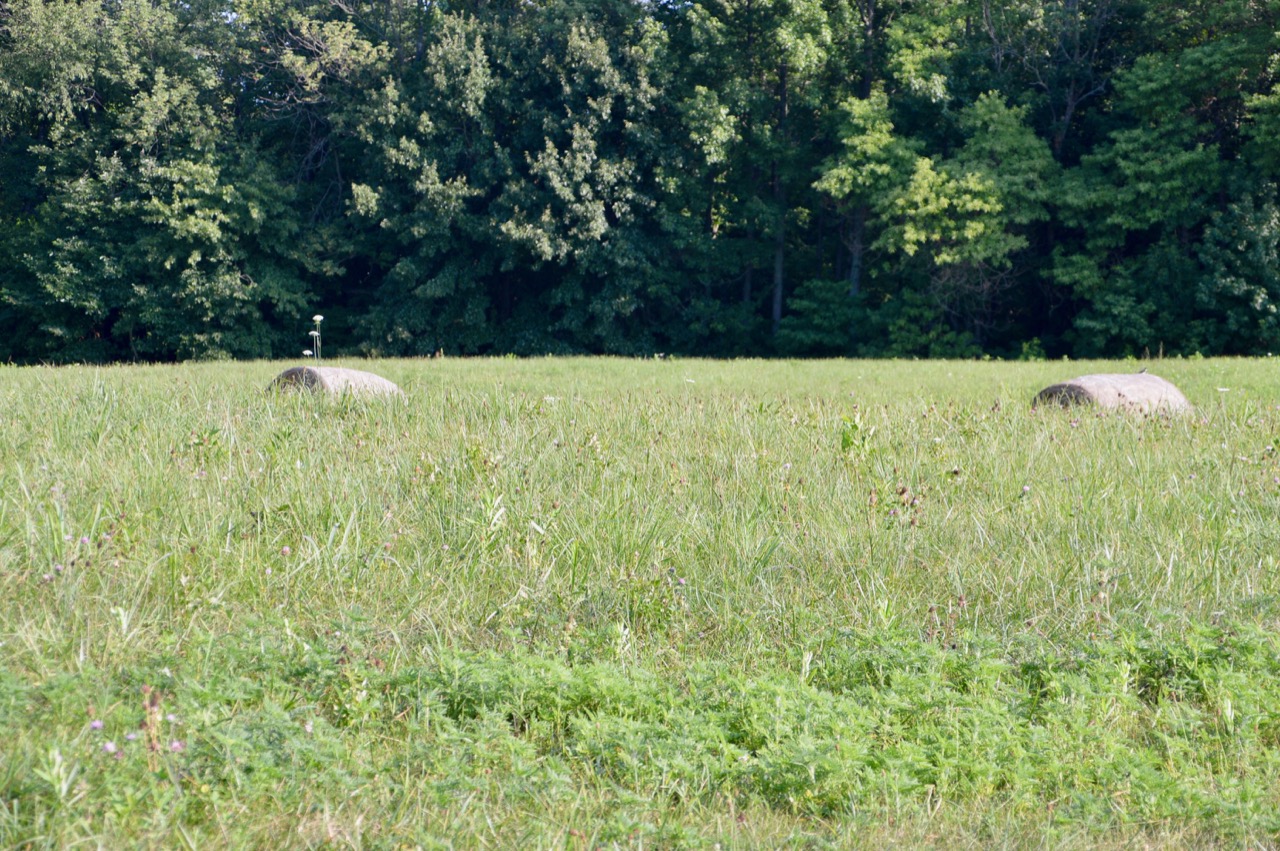 From a distance the 7 acre field looks flat. It's not. There are not large hills but there is plenty of rolling terrain as these two regular size rolls of hay show. The times I have walked from the woods up ahead, back to our direction in that area, the incline looks tall and steep. 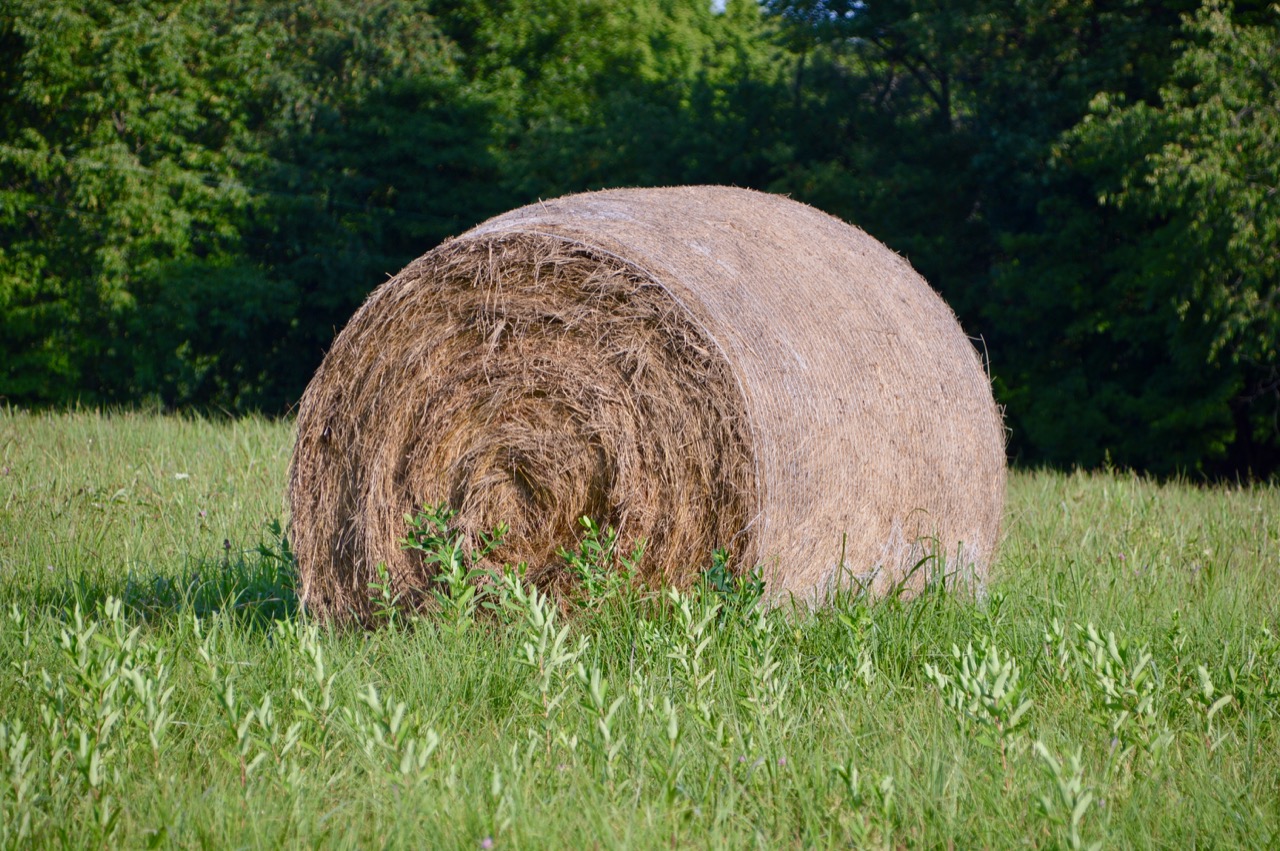 How long will the hay sit in this field before they load it onto a trailer and take it away. 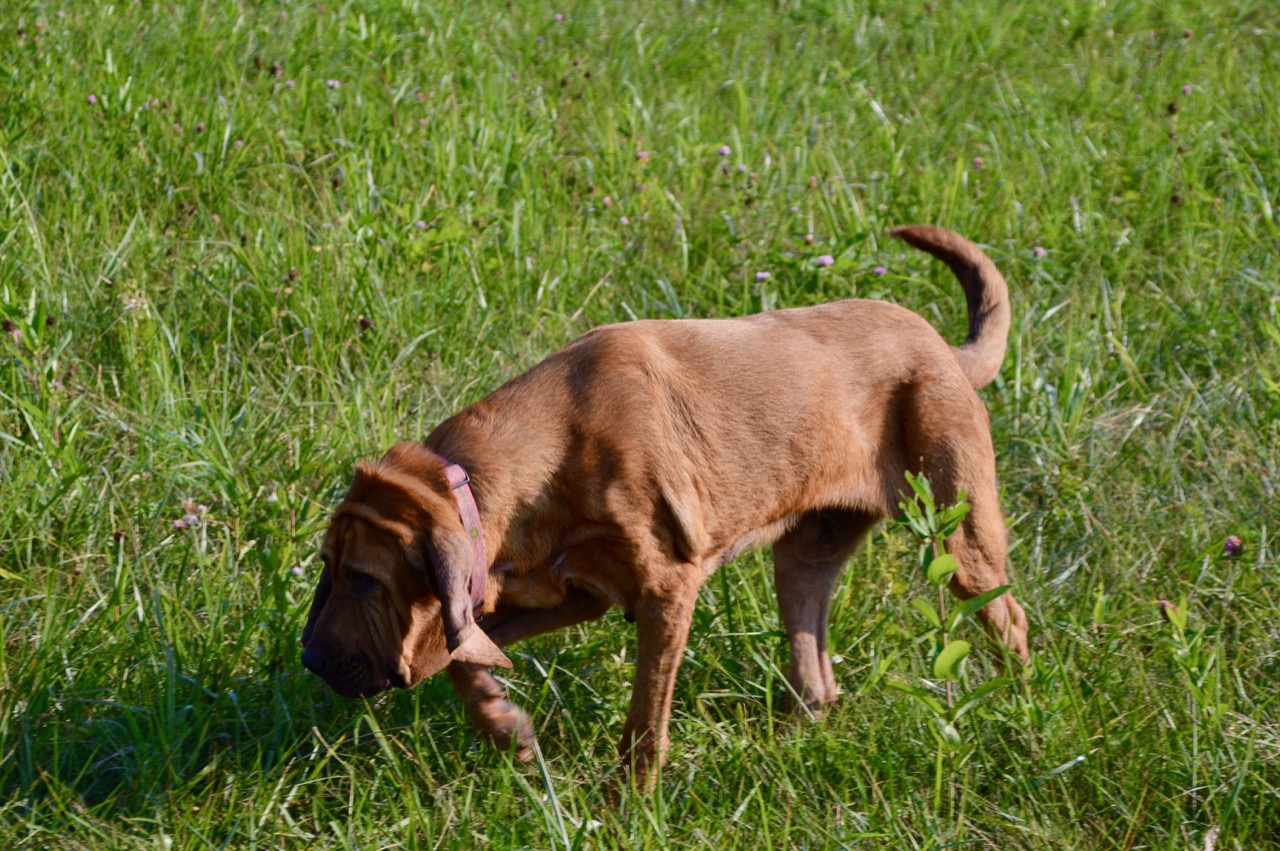 That might look like Stella is increasing her walking speed, don't let it fool you ... one paw at a time ... slow slow slow. 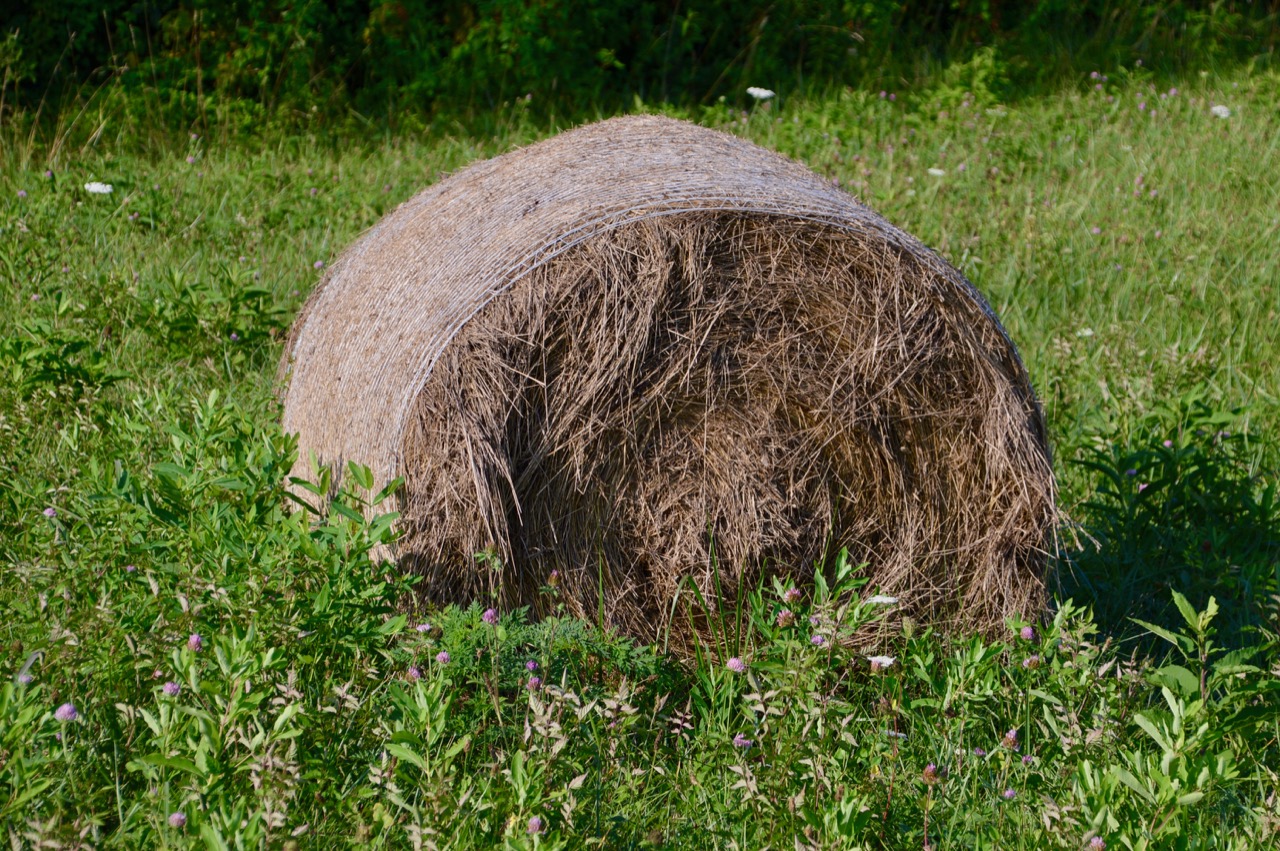 A smaller roll and was probably the last bale the did. It was rather a poor outcome with about 50% of the hay they normally get from the first cut of the summer. 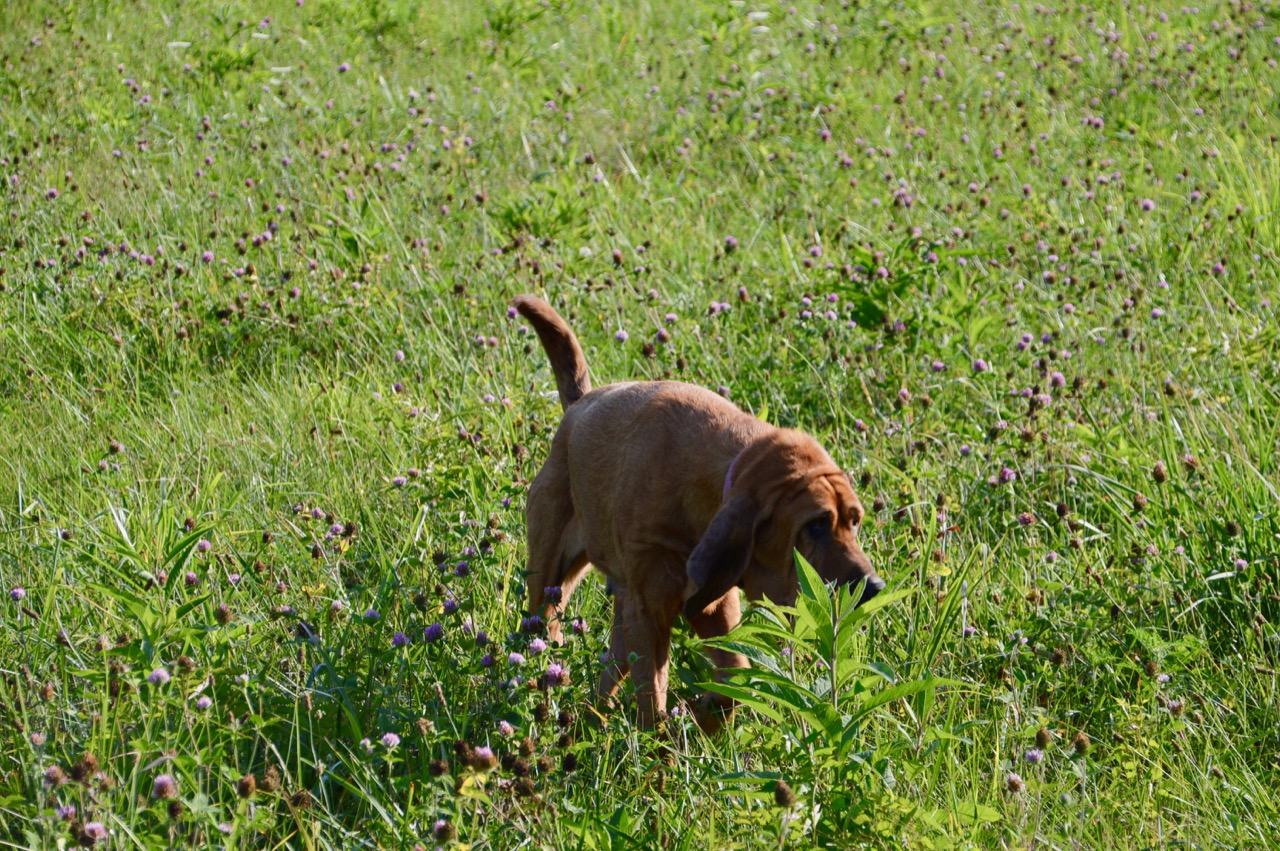 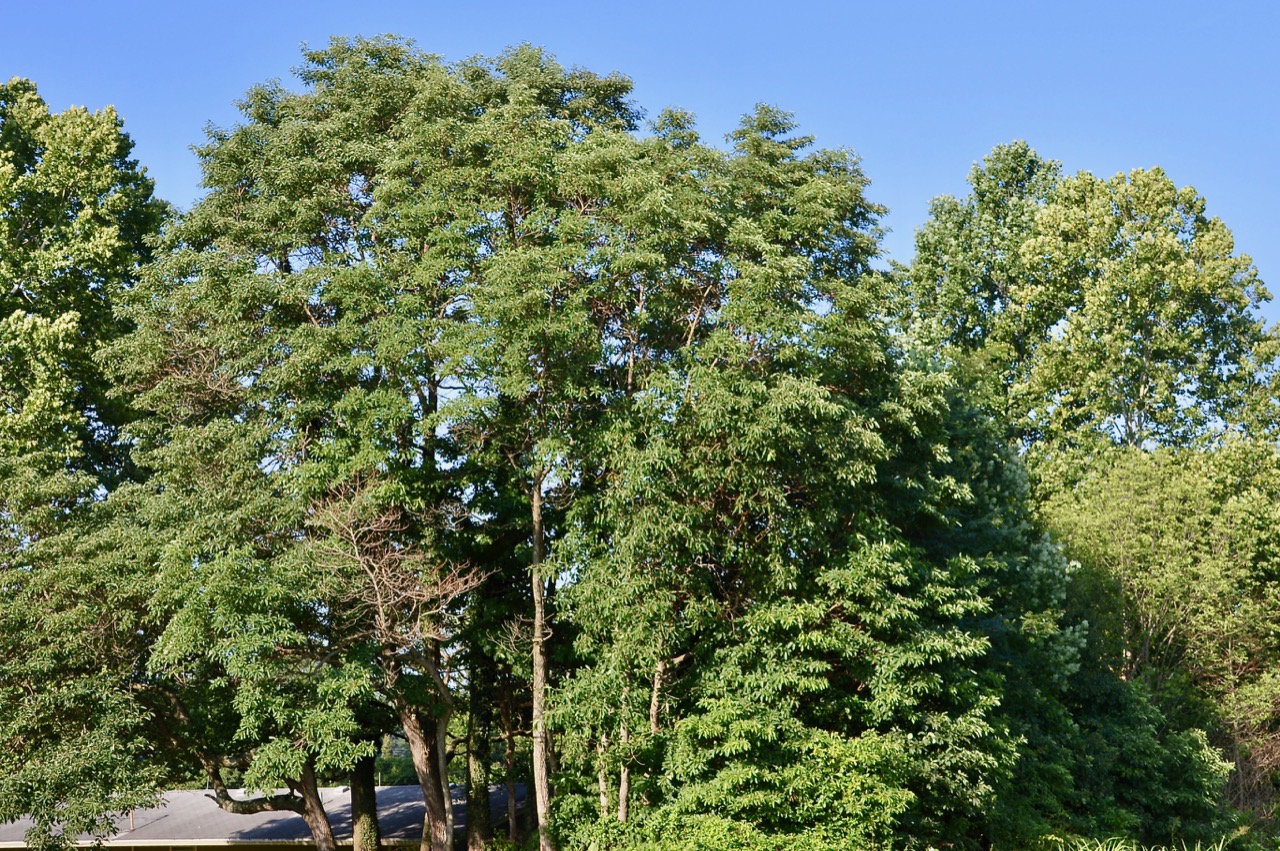 Hard to see but the trees near the house show the slight breeze from the NE. 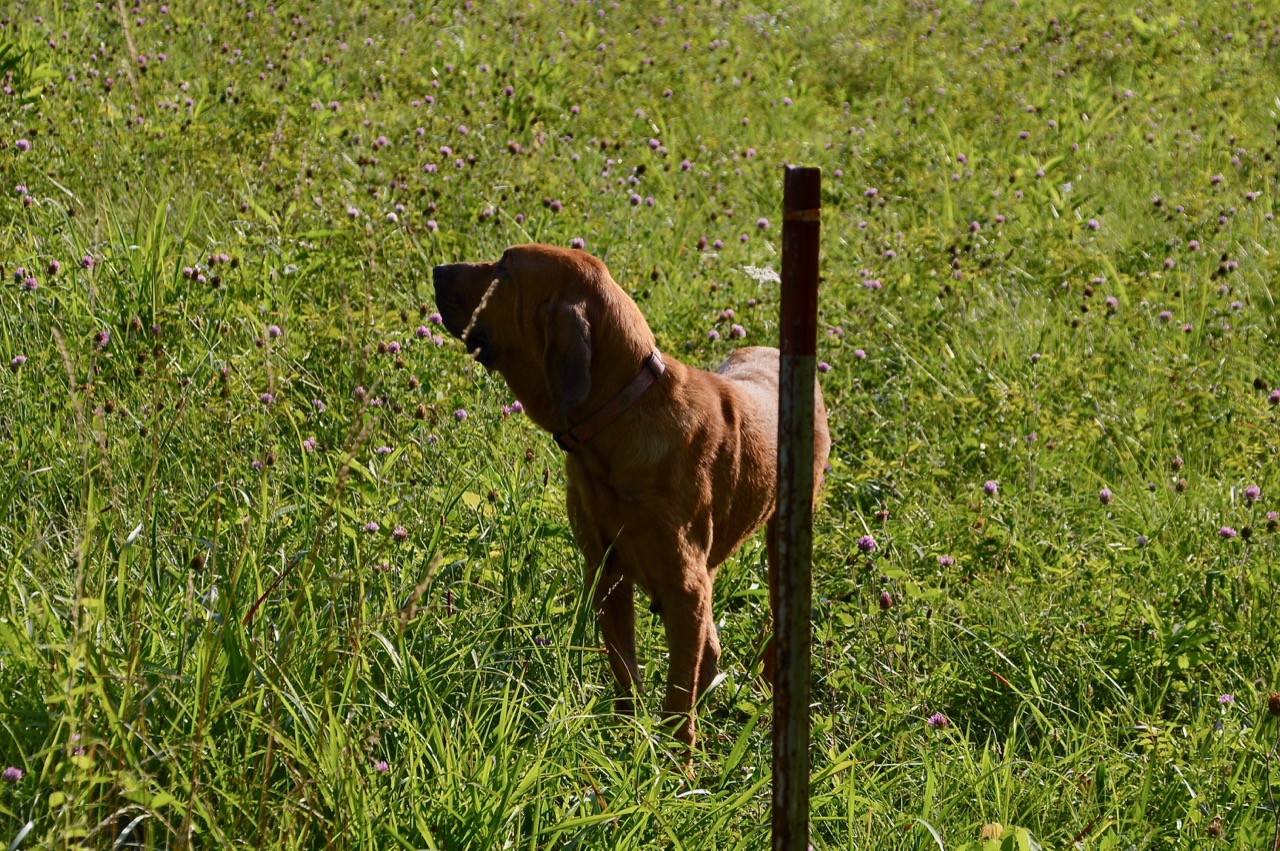 Is it food she smells, does she hear people talking, or is it some kind of other noise? 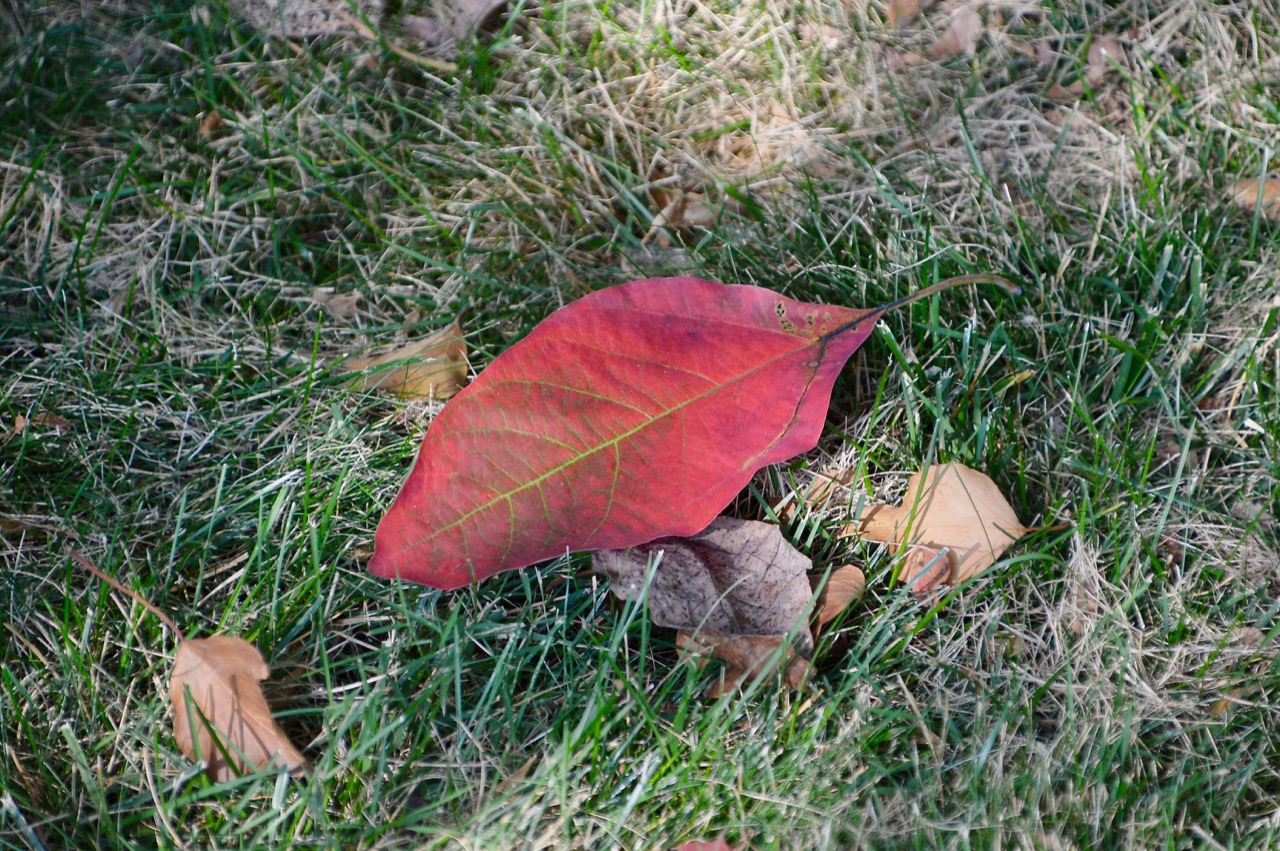 When everything seems to be green, including the house (painted to blend into the environment) ... this bright red leaf stood out 100' away. 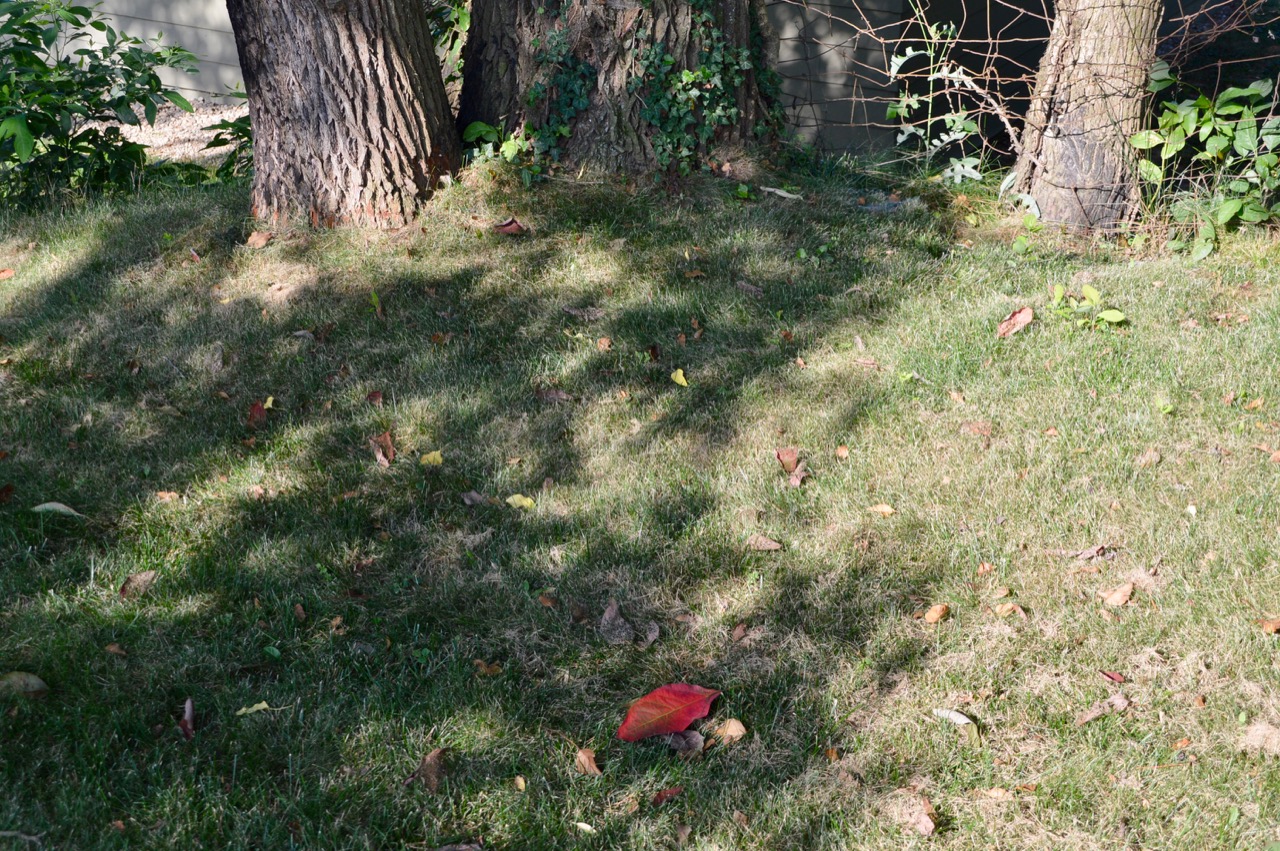 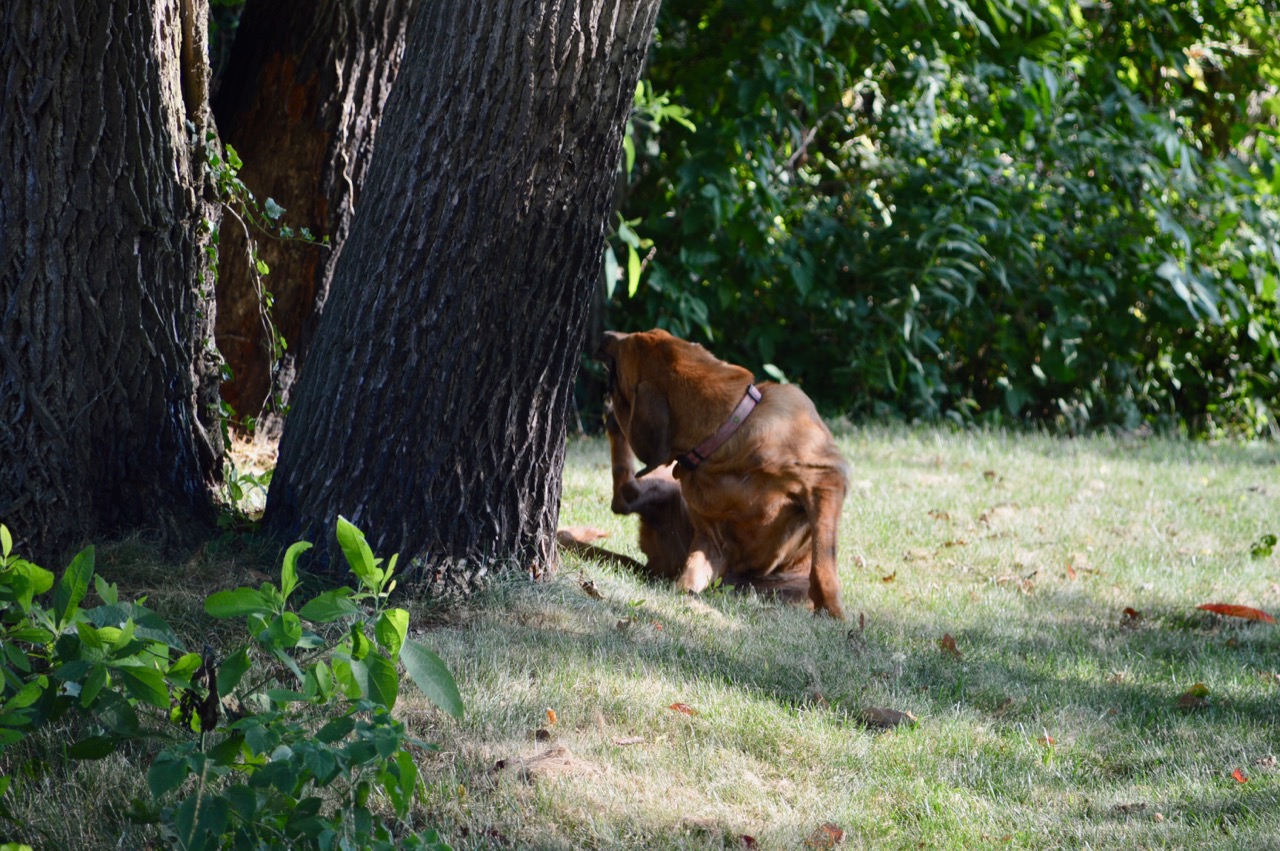 I did a flea search on Stella last night with one of those metal flea combs that will bring a flea to the surface ... not one flea was found. So it has to be allergies, maybe environmental? Pollen? Grass?

Allergies reminded me of all the different kinds of Grain Free Food I was feeding the hounds a couple of years ago. I found this article this morning to be interesting and concerning. If you feed your dogs Grain Free Food ... take a look. 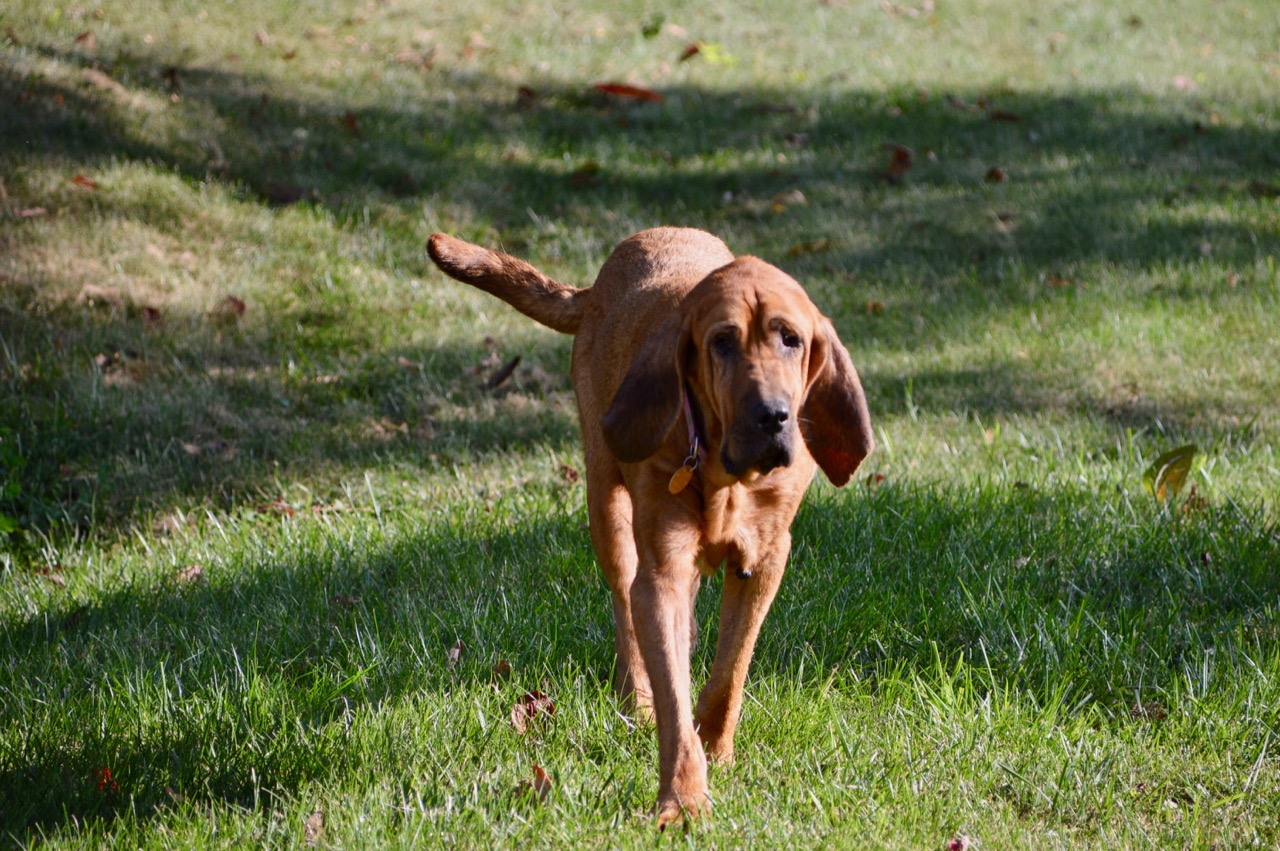 Since February of 2017 all three of the hounds have been on Chicken and Rice or Lamb and Rice without the long list of fruits and veggies. I stuck with it because it because Heidi got results in battling her skin issues and Stella's coat was softer than ever plus she started gaining her weight back. Sadie's coat was also and continues to be softer than ever.

A vet told me when he was looking at Heidi at her worst, in his study on food allergies for dogs, only 3% of those allergies were food related. He said they had found that one cause was the beef in Heartworm meds. Yet, Heidi never responded to treatment in 2015 (?) with environmental allergy meds. She did not respond to Grain Free Food but she did respond to a food with fewer ingredients.

Of course I have a spreadsheet to compare all the different foods I fed the hounds, listed by each ingredient. 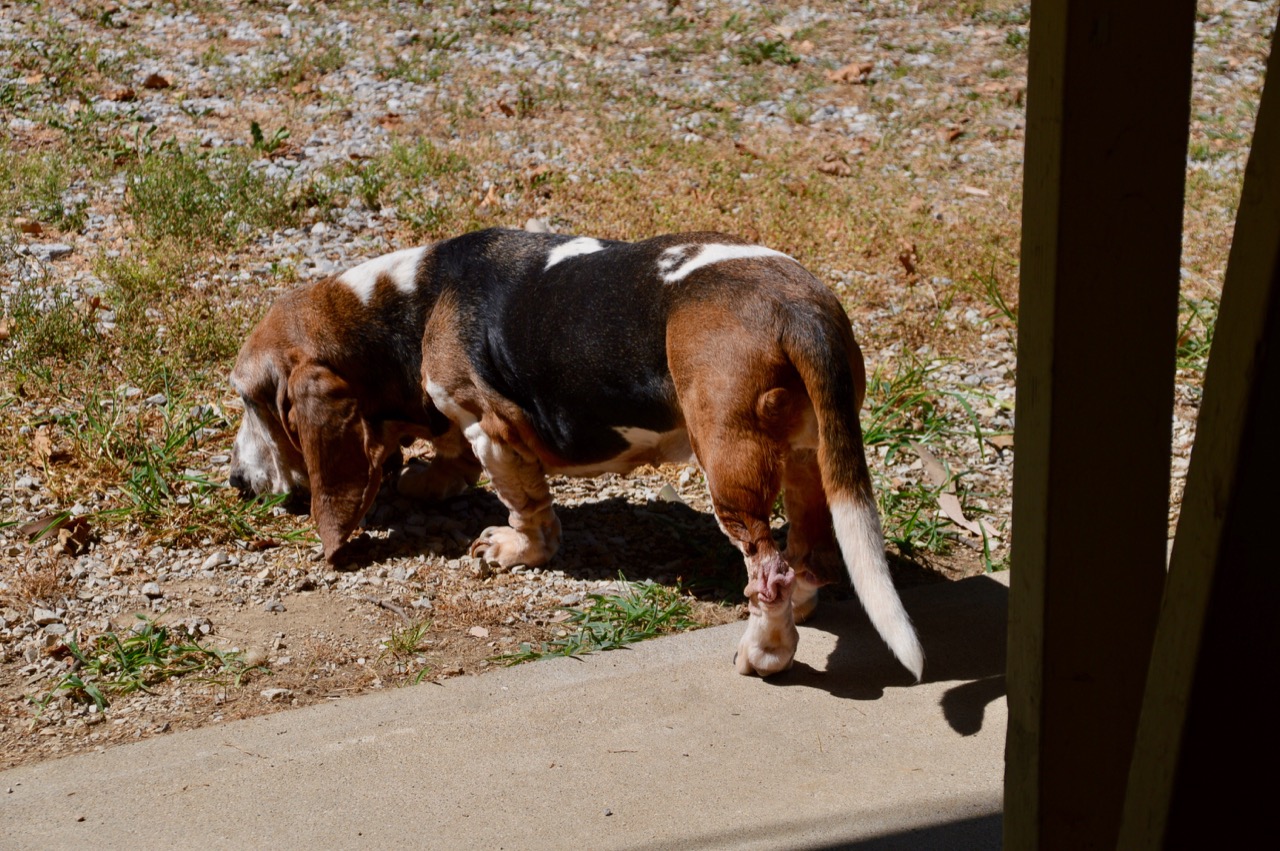 The following photos are going to give you a pretty good idea of the daily routine of the hounds after their lunch. I don't know why, but rarely do they do anything more than this. Today was very nice outside, nice enough to sit outside and just enjoy the day ... but it wasn't more than 15 minutes where they wanted back inside. 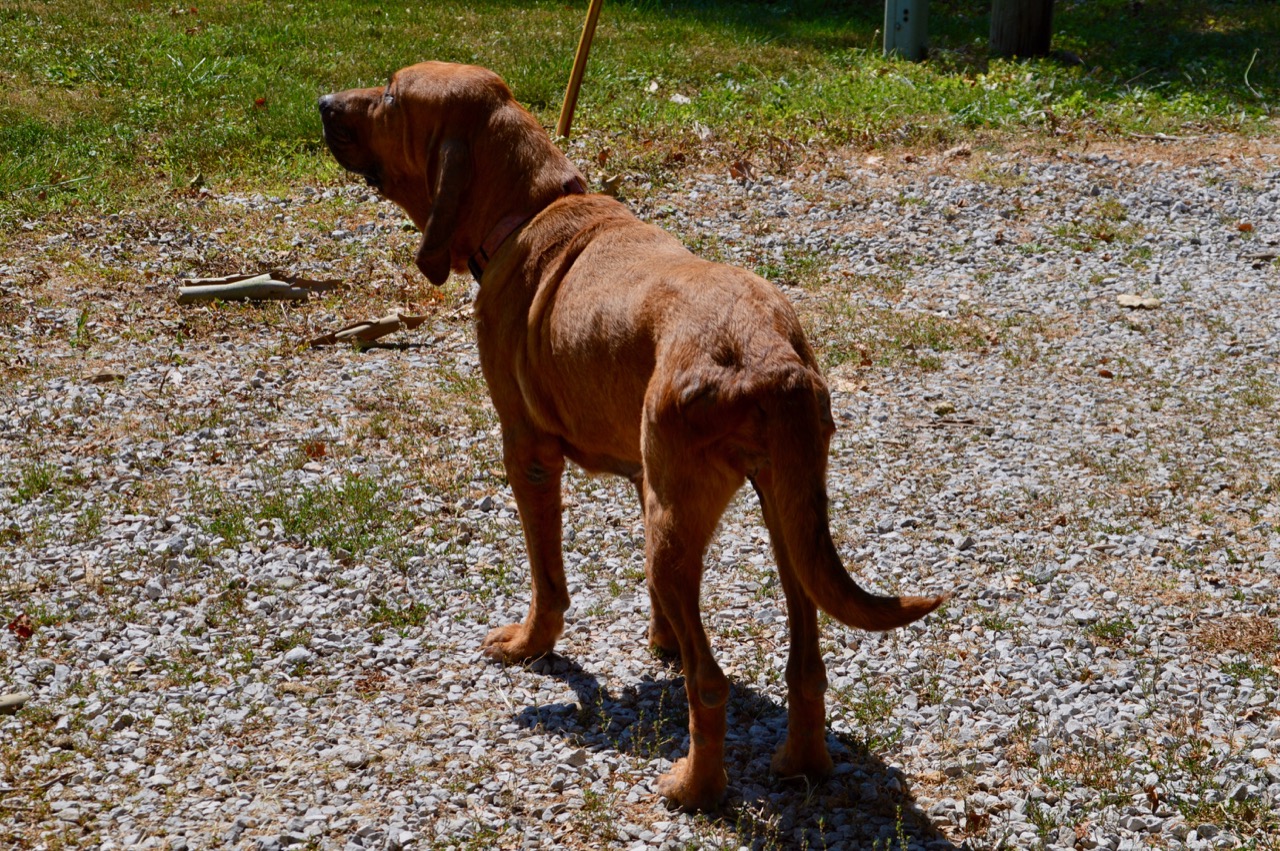 They don't understand that it's a life of retirement that gives them this opportunity in the middle of the day. A little over 4 years of me being retired and I still enjoy each and every day as they do also. 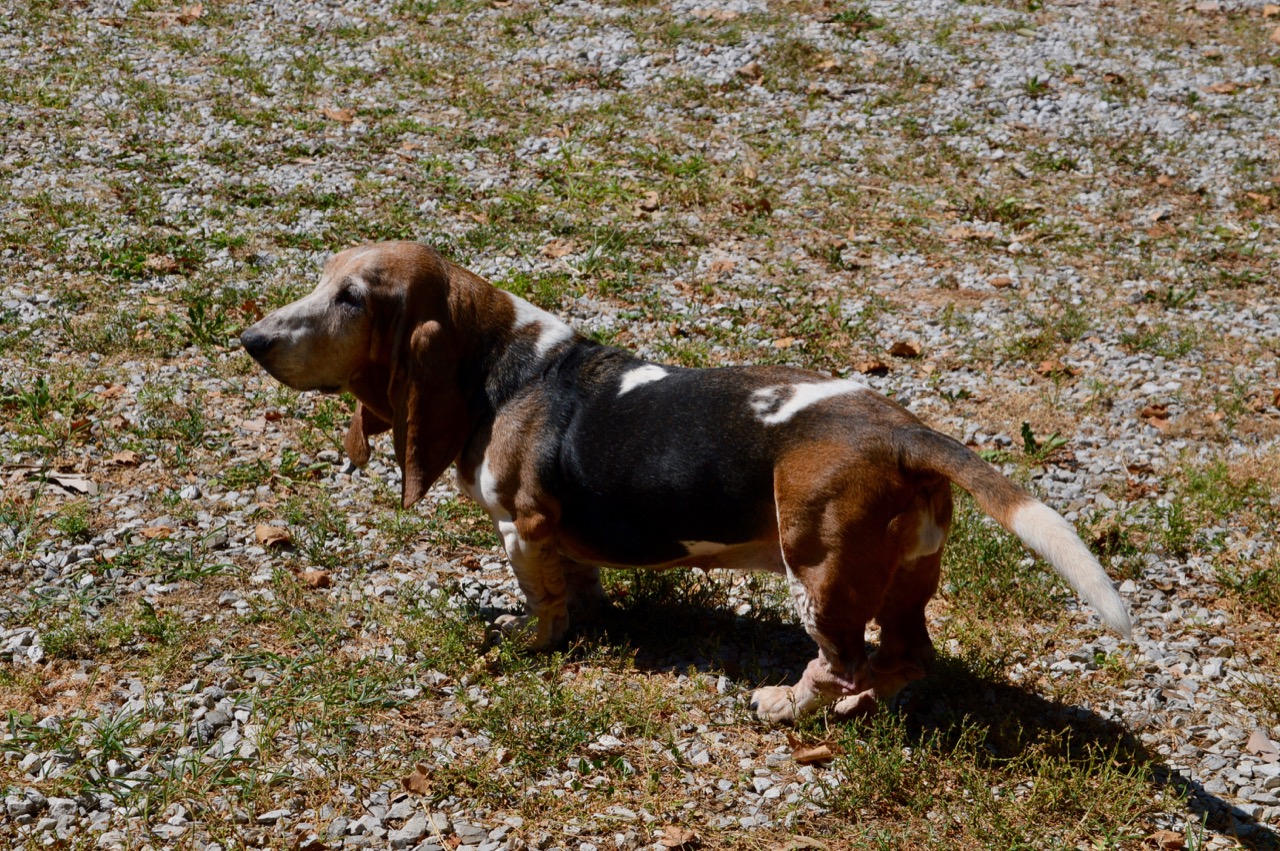 Obviously from the photos you can see they do a lot of thinking about possible plans or scents to check out that they missed in the morning. 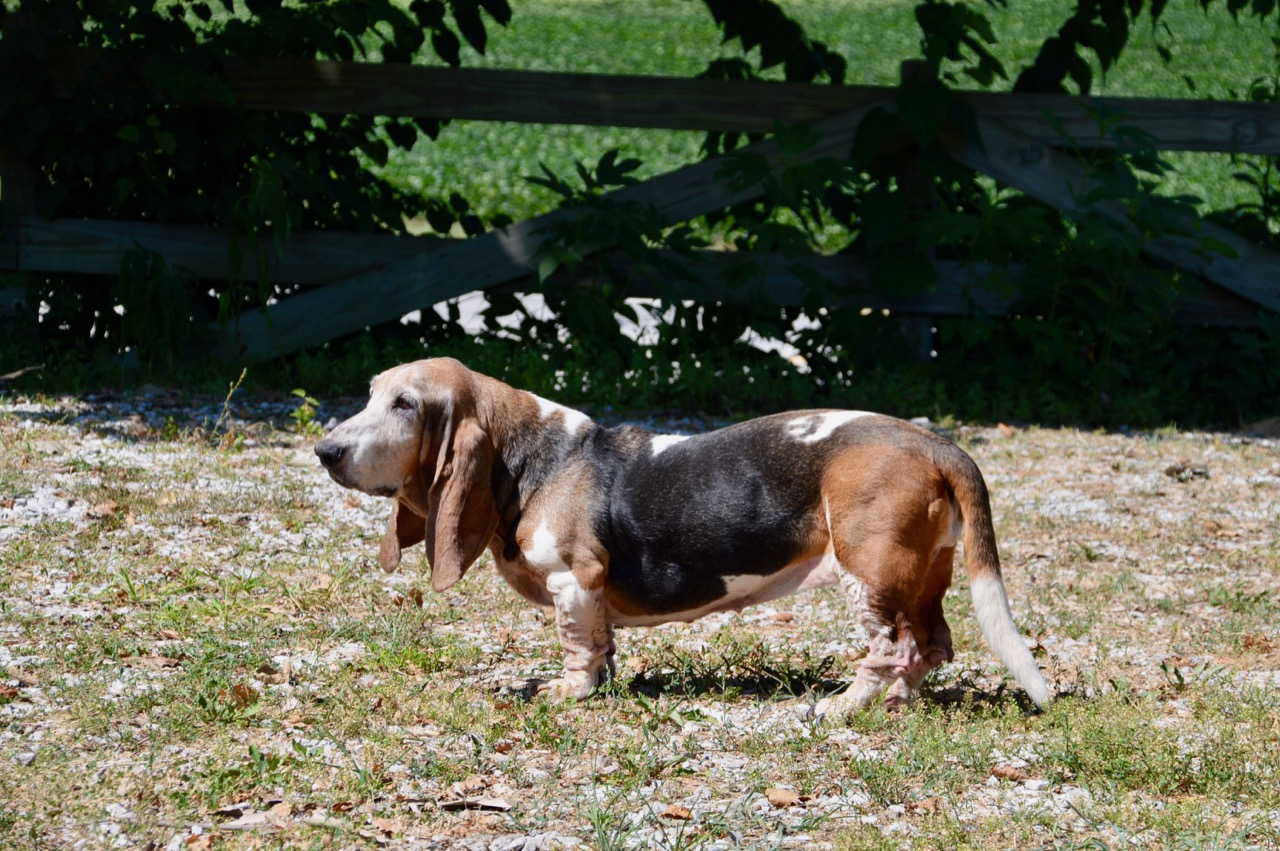 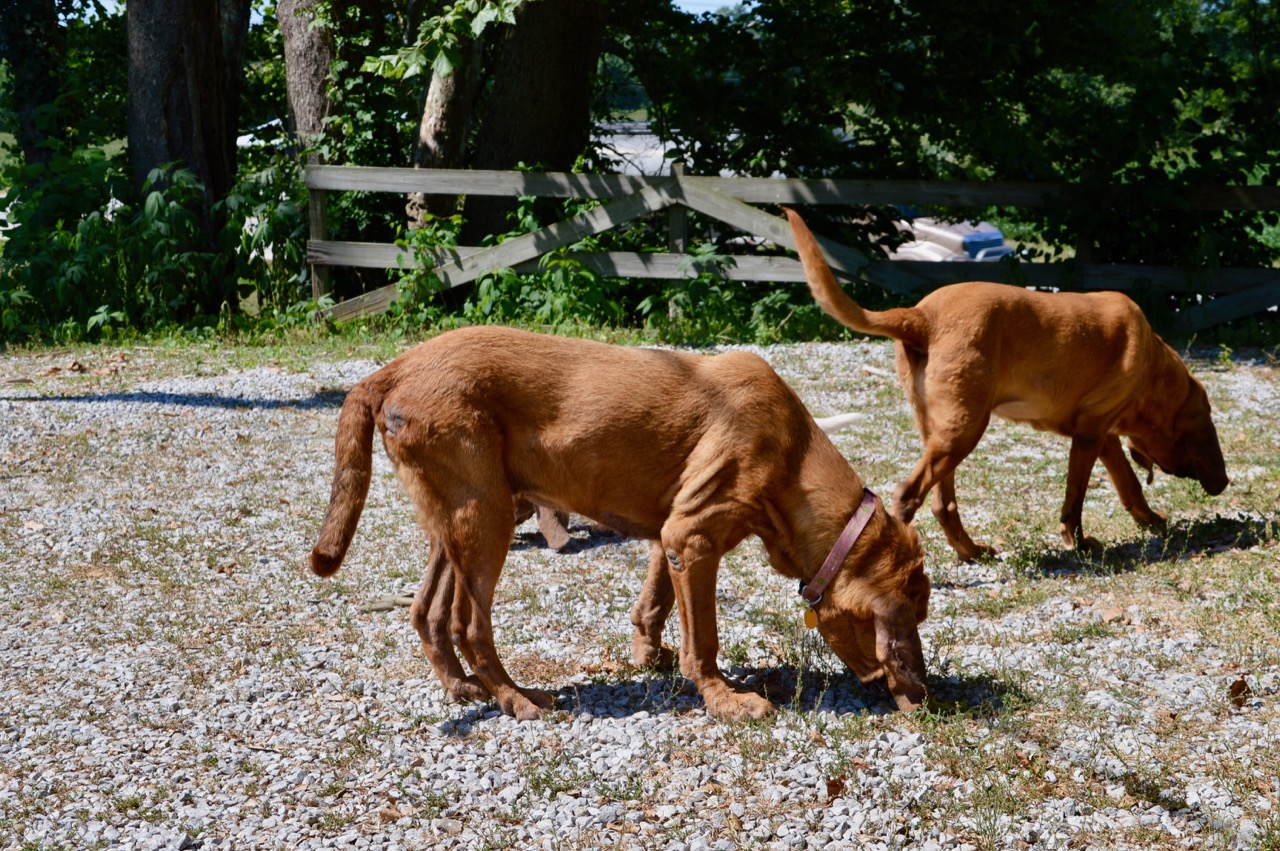 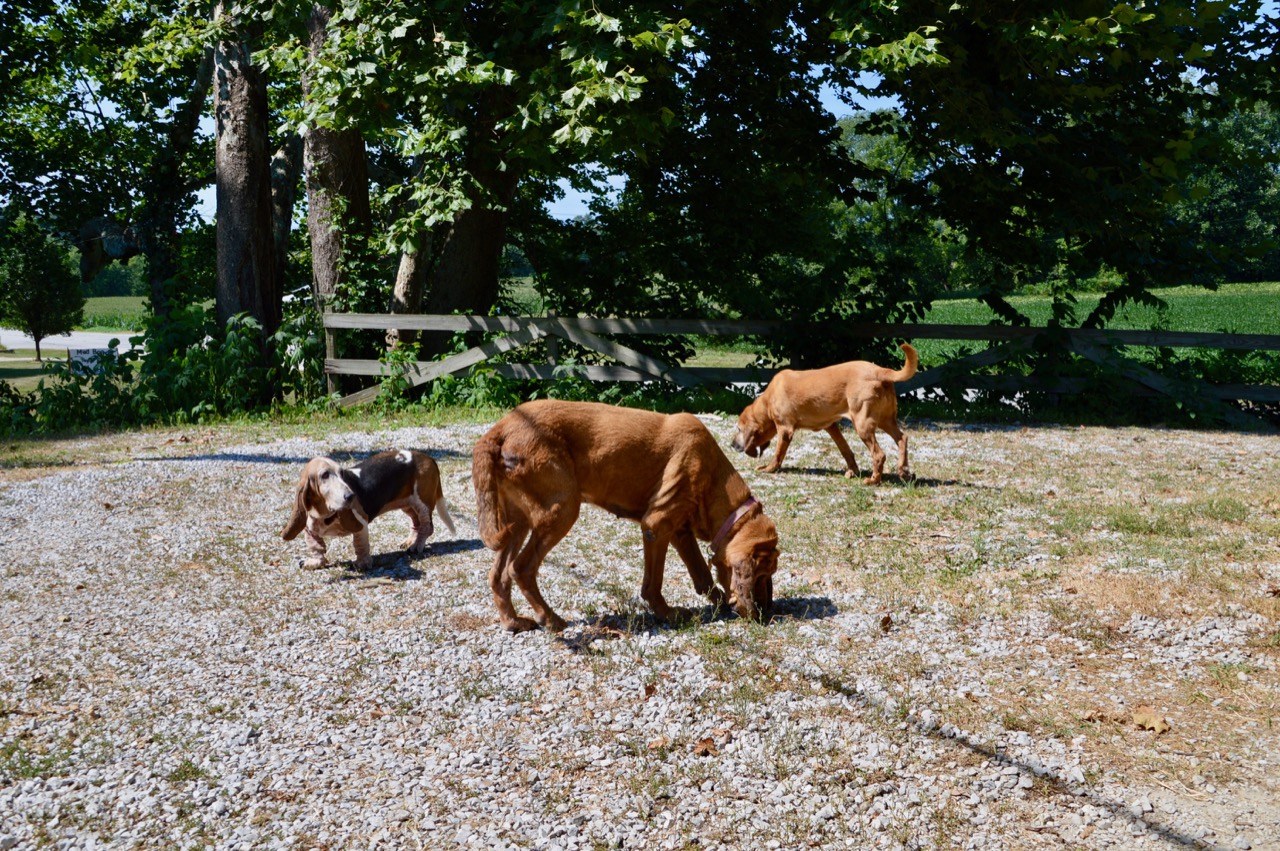 With Stage 10 of the Tour de France being in the Alps today, it was nice to watch that in the middle of the day, fast forwarding through the 3 minute commercials. Fantastic shots of the Alps taken from the aerial tv cameras during the race. It's really unbelievable country and villages in France. 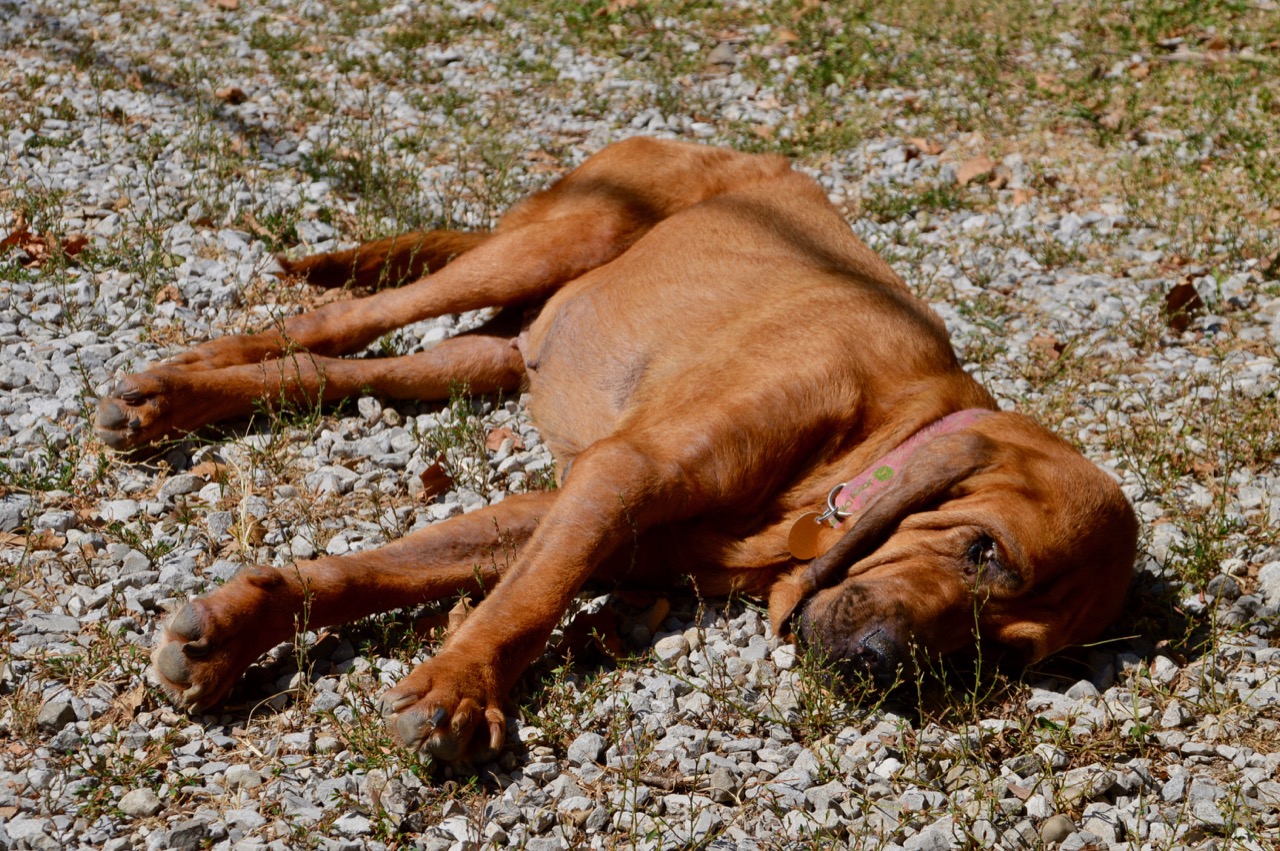 It looks like Stella could sleep there all afternoon but she was at the door wanting back inside within 10 minutes after Sadie, Heidi and I had gone inside. 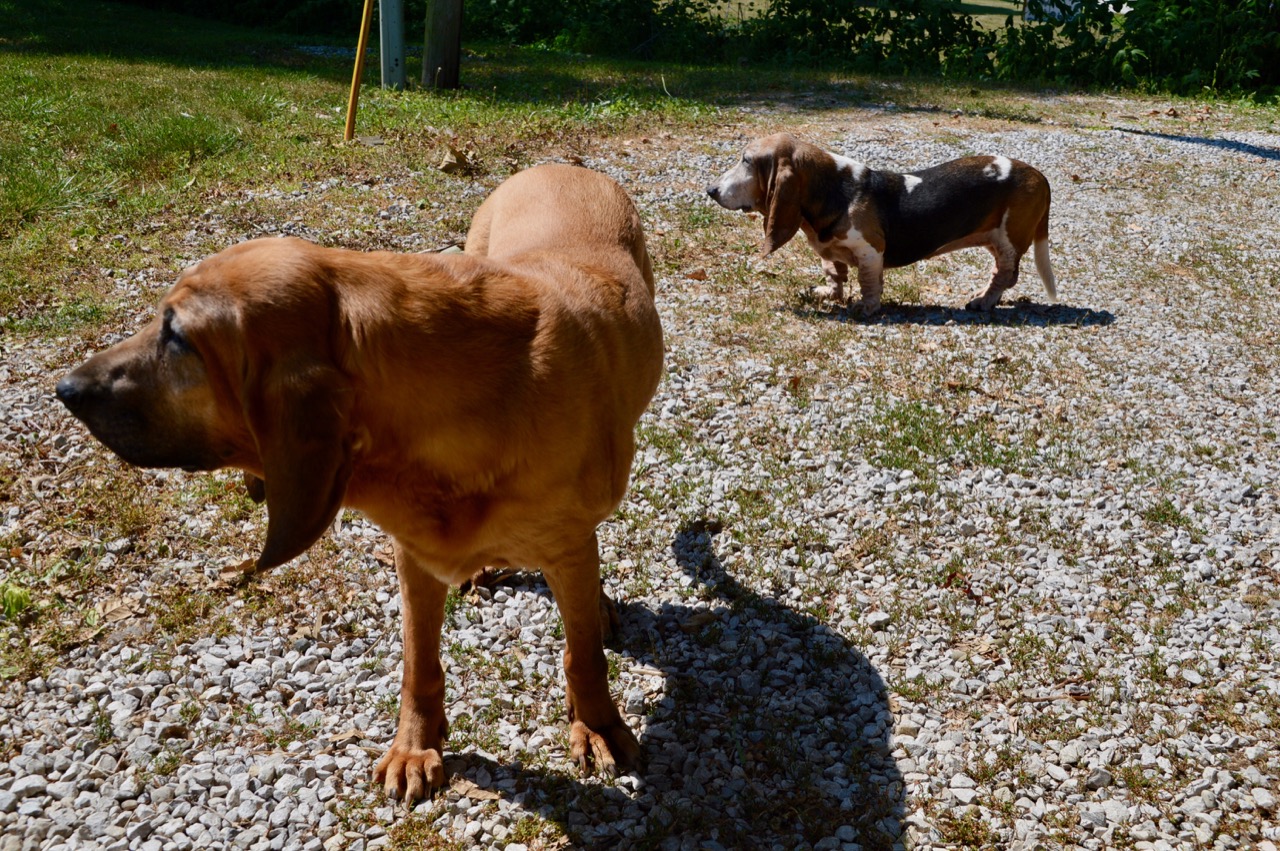 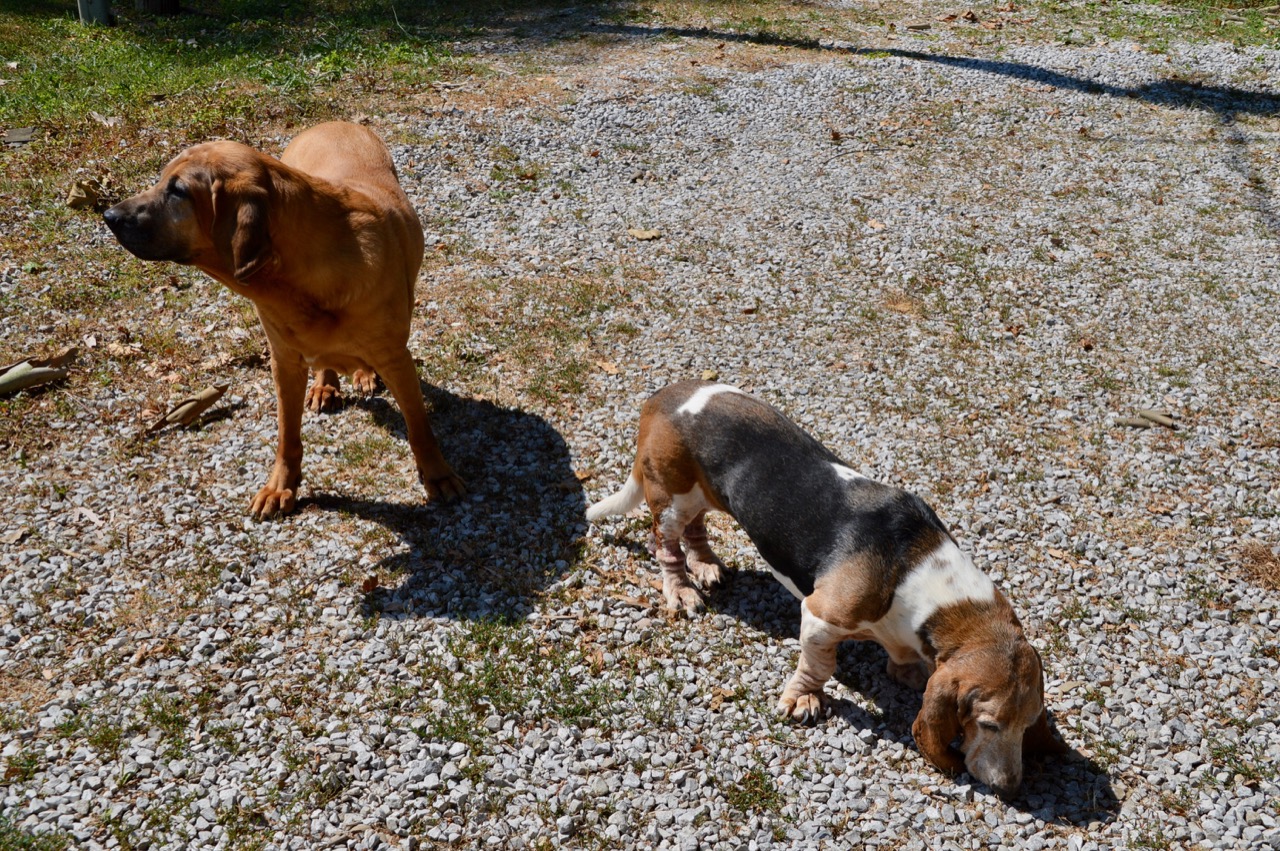 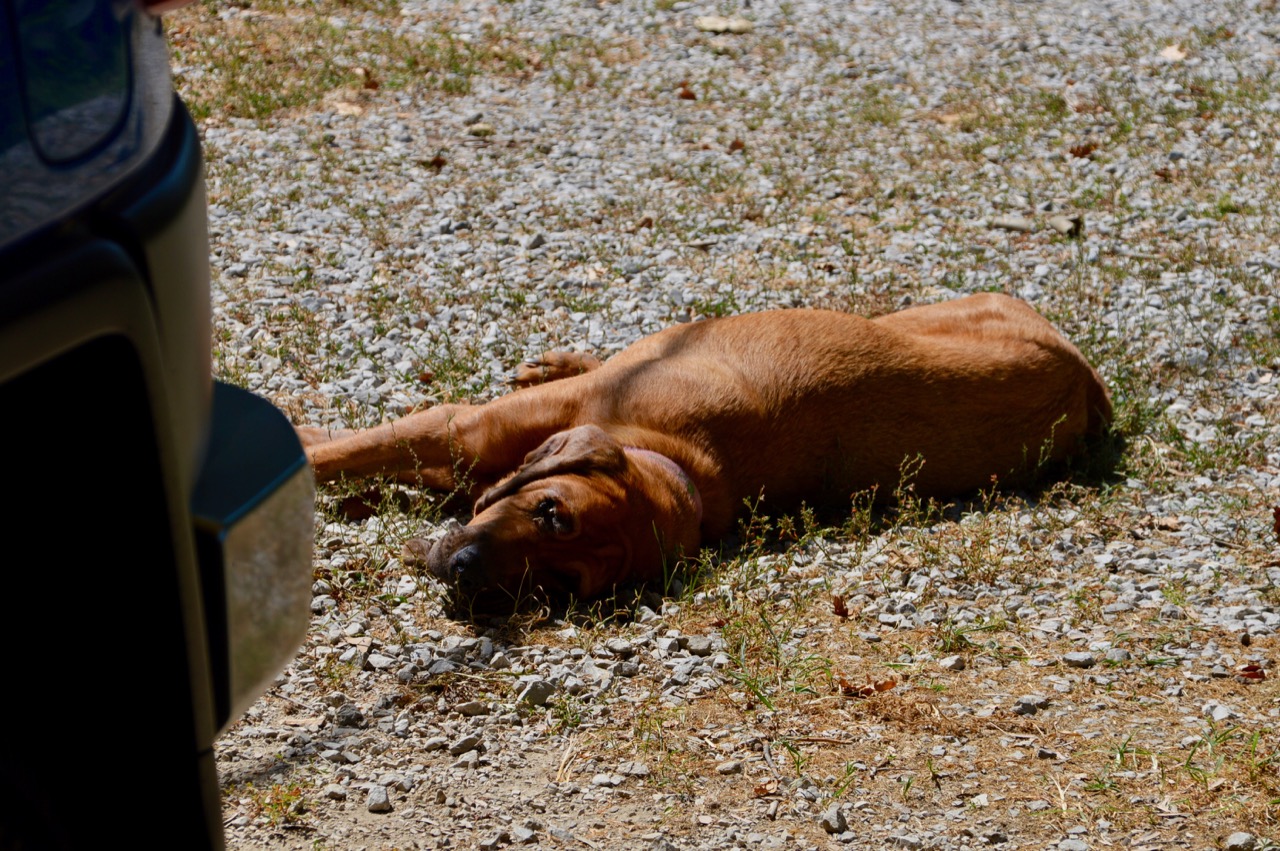 Of course after watching all of that bike riding up 7% - 9% mountain grades, for over 100 miles having a few flat sections between climbs all of us were exhausted by the time their 4 hour race was over. They moved from their living room sleeping spots to the bedroom floor while all of us took a nice long siesta. Just another advantage of being retired.

The highlight of the night will be watching the MLB All-Star game. I will not tune in until after all the 'made for tv' introductions are finished. I will miss all of the pre-game festivities. I just like watching the game itself. Anymore it seems like the MLB, NBA, and the NFL all try to be more extravagant than the other sports All-Star games or the NFL Super Bowl. As a long time sports fan I will say it's all out of control anymore ... a topic I find very irritating.

Although it was 88°, the cooler wind from the north made it possible to take a late afternoon walk. Sadie took her normal path while I walked Stella on the retractable leash.

Another fantastic day here in 'the tropics' of Southern Indiana.
at July 17, 2018