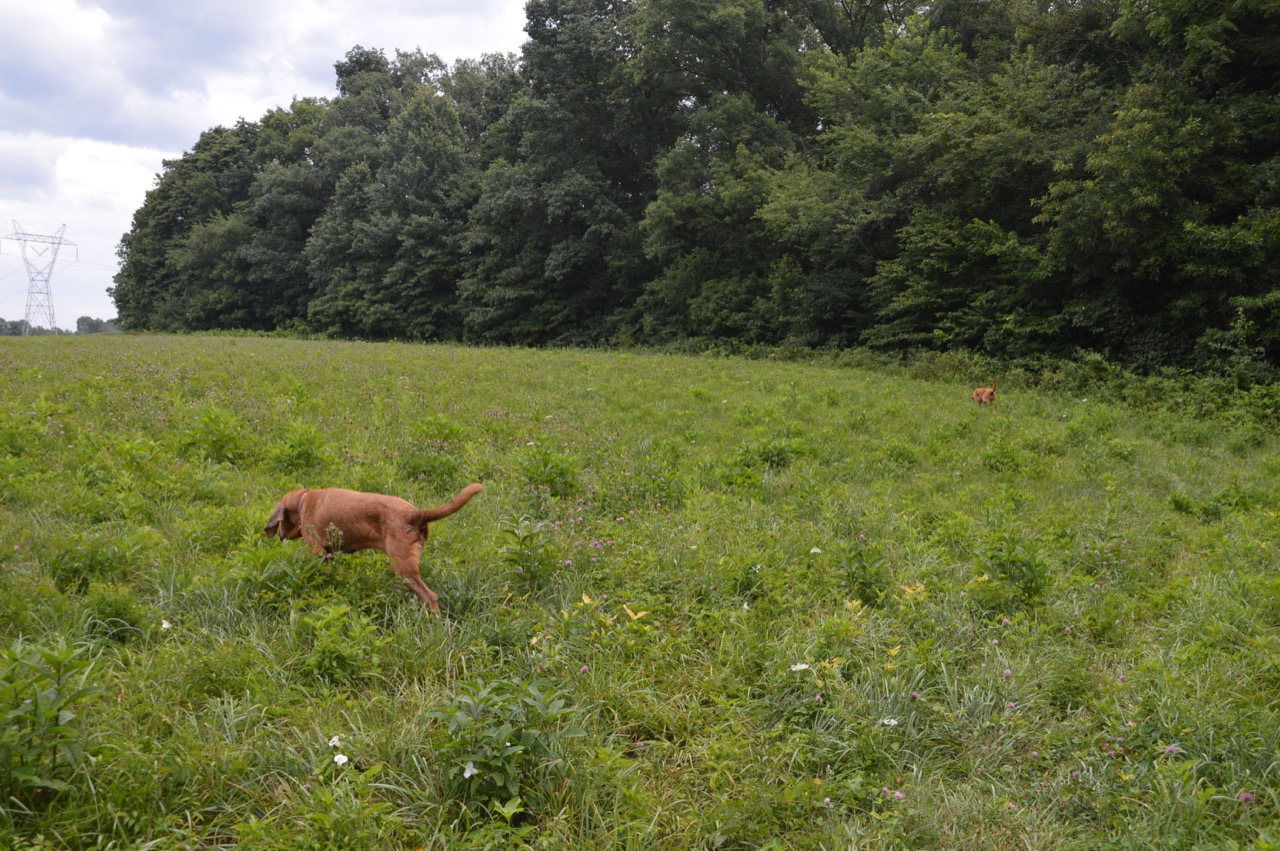 You didn't think I'd buy a TV without my normal over-analytical research did you? I am also not someone that has TVs in the kitchen and bedroom, no matter what size the screen is. I have thought of having two TVs in my living room because on most Saturdays between September - January there are more games being played at the same time than I have TVs for even with Dish Networks split-screen where I can see 4 at once. I know ... it is hard to understand if you are not a 'sports junkie'. 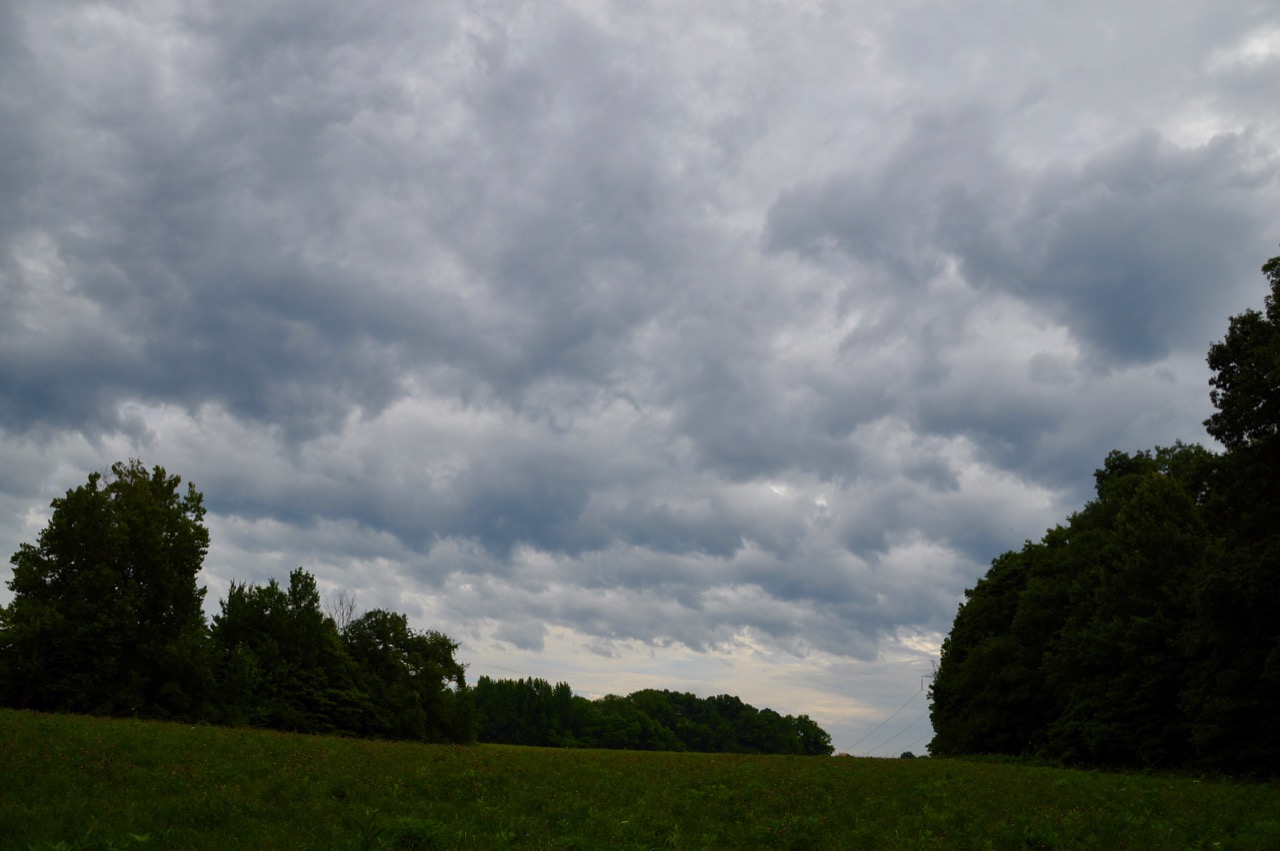 The forecast showed a 40%-70% chance of rain starting at 1pm and covering the rest of the night. This one time I hope it will happen. We need the rain, my yard needs the rain as do the few plants I planted last summer. The clouds to the east this morning seem to tell me I had a pretty good chance of that forecast being accurate. 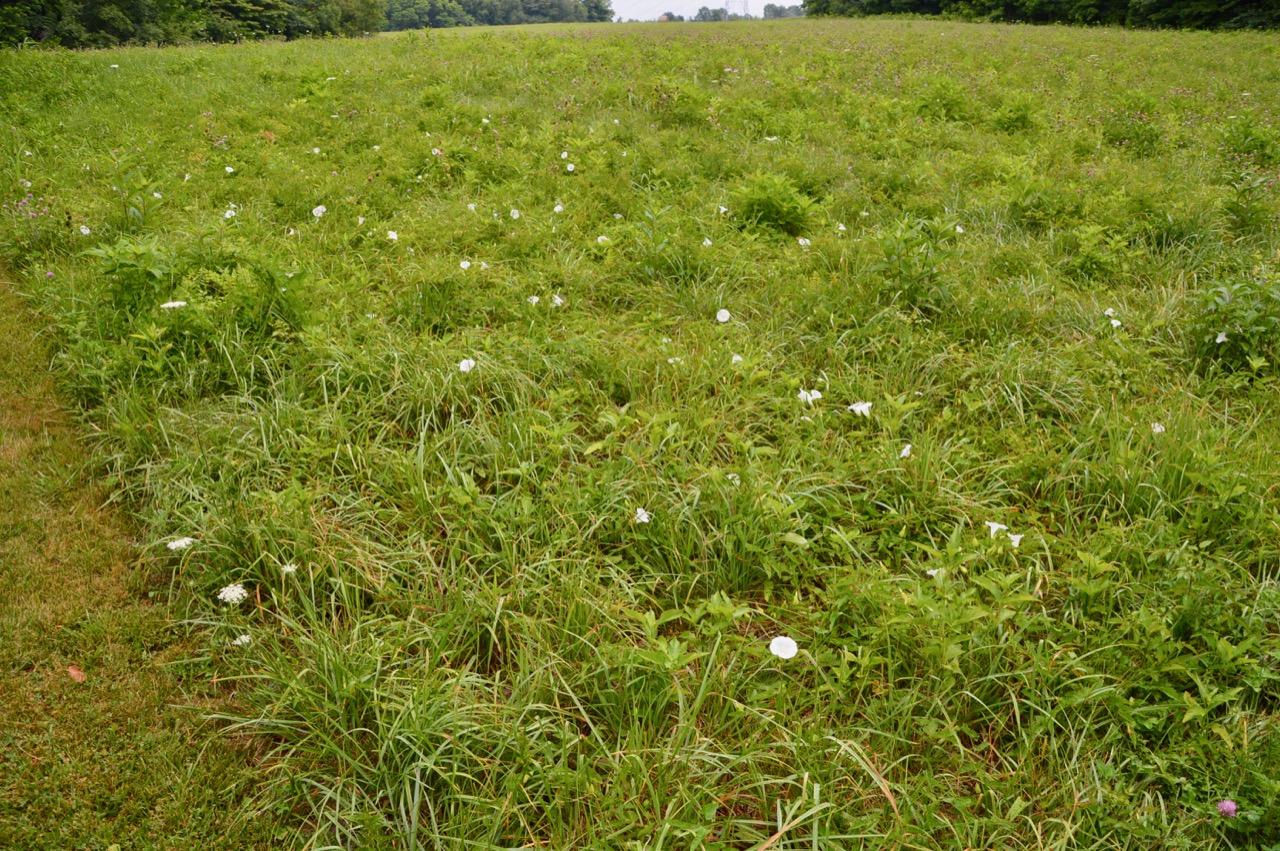 It's times like these I wonder about the theory of 'after-life', whether it be dogs or people. I had blogged recently that these white flowers were in the field but only one maybe two in 7 acres. This morning as Stella and I stepped into the field just a small section next to the yard was covered with those small white flowers that look nice. During our walk I did not see one of these anywhere within my view ... even the top of the gully that is filled with honeysuckle and sprouts them at times. You have to wonder why were there so many there and nowhere else. I know I'm probably crazy but it does make me wonder. 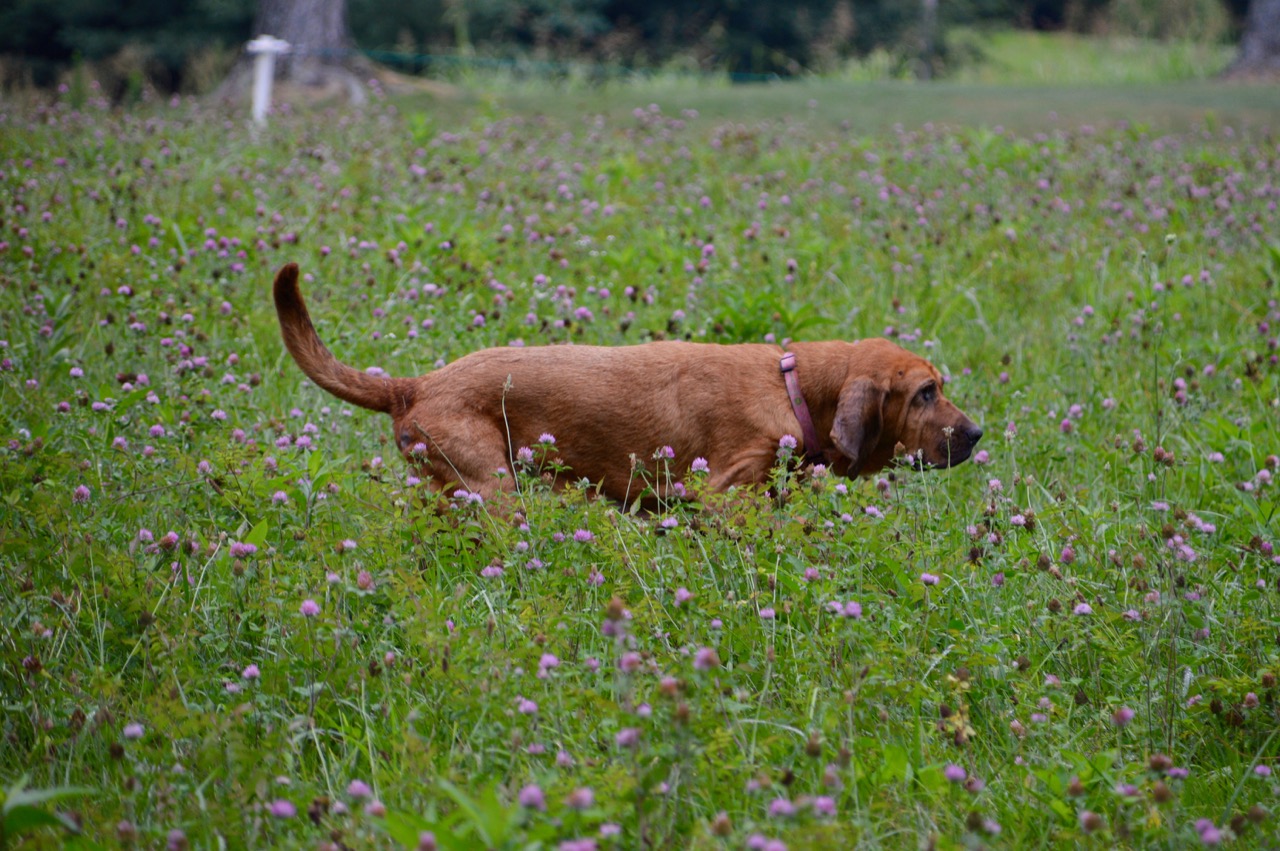 With it already being hot and muggy when we started a little after 9:30am, the AC had kicked on automatically as we closed the door. That is a sure sign to close the windows when we return. I did not hear any rain last night while sleeping but it looked like rain had passed through, but not large amounts of it. The ground was soft but not muddy. Stella was off on her own but staying withing distance. 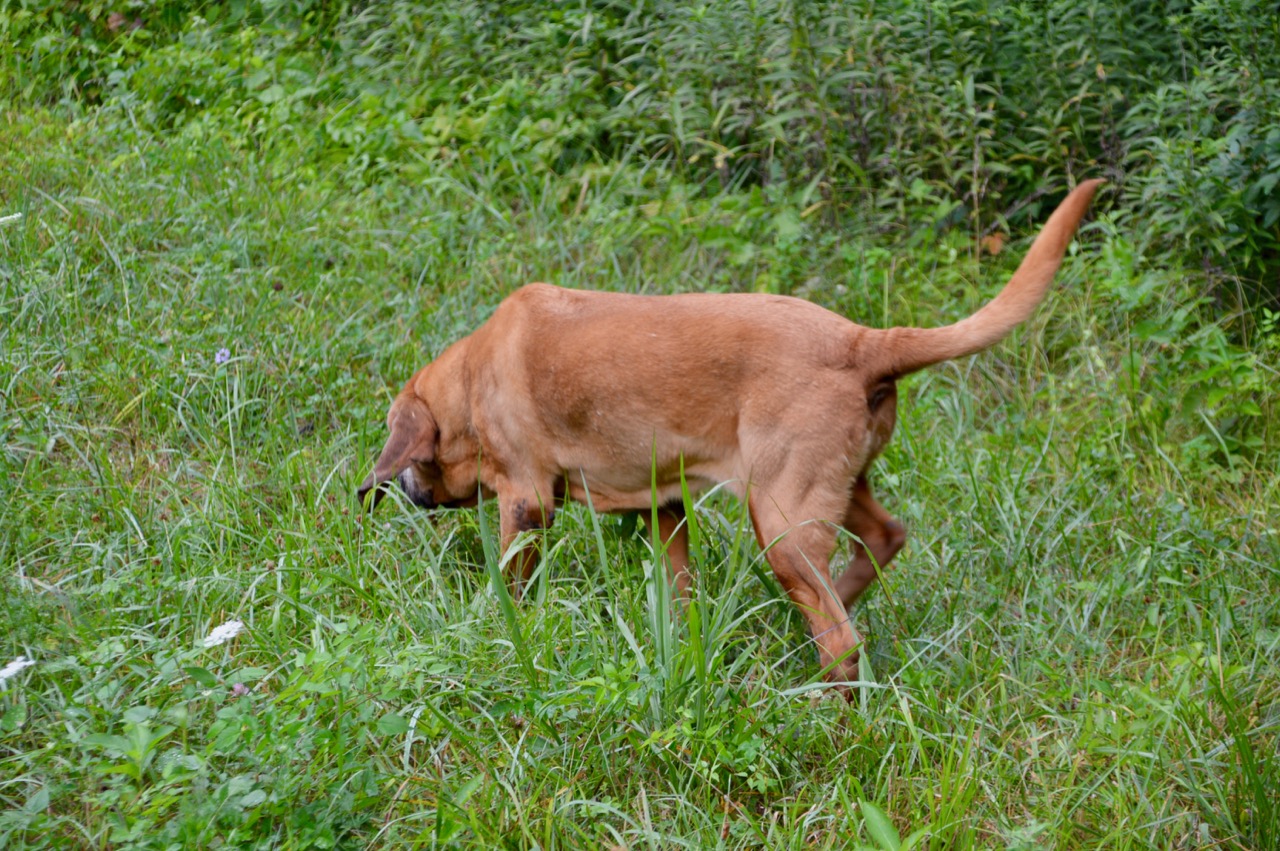 No change in Sadie's lump on the right side. I was never able to get a picture of her right side today. I did feel it first thing in the morning and there is no change. Not hard, not soft, not larger nor smaller ... it's just there. 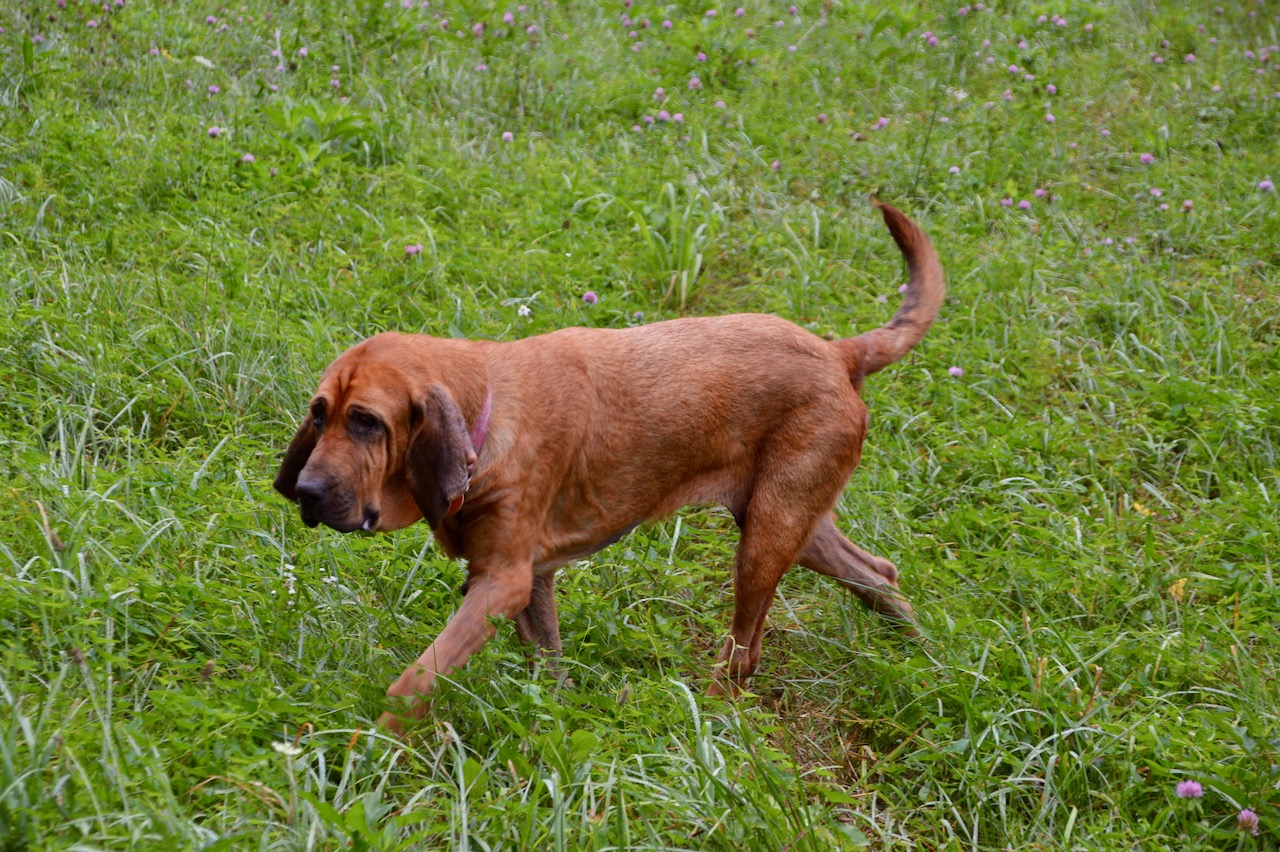 From the middle of the field I was happy to see Stella turn our direction and join us ... she did well today, very nice, obedient, no signs of stubbornness ... LOL, she's funny. 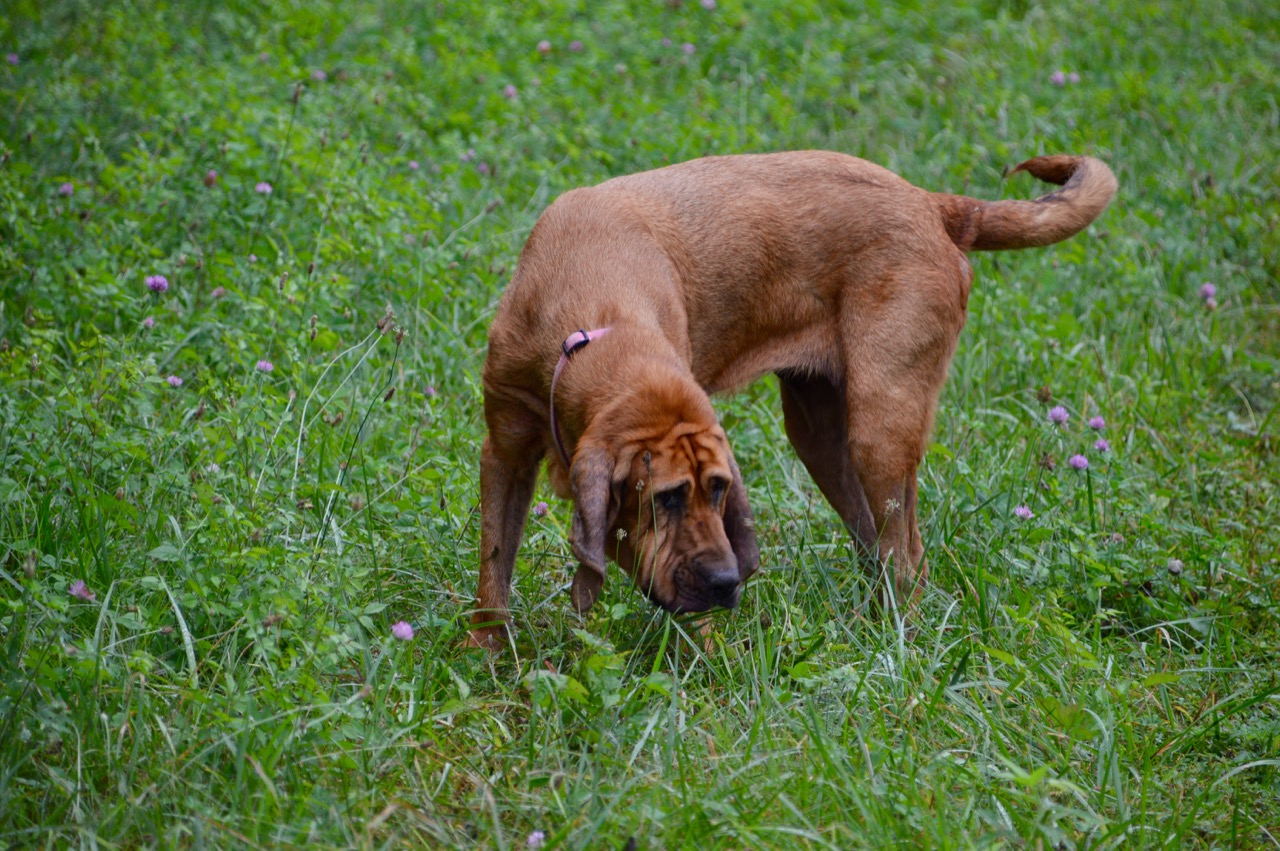 I told you yesterday that I had an article about taking pictures to read in my Feedly account. Here is what I am talking about, and ... no, this is not an affiliate link but it is a safe link to open.  It was called Are You Using Your Camera Wrong?

So I double checked some settings on my camera and right off the bat I found something different in the type of photo where you can set it two different ways. When I bought the camera in September 2014 I turned the setting knob to 'Guide' and set up my camera ... when I did that yesterday it was showing photos were RAW and Large. The other way of setting that is in my 'Menu' and it showed where I had changed the setting to JPG-Fine and Small. Did that make a difference in photo quality ??

I also found I had been letting my right elbow 'float' more than tucking it under the camera. I didn't see much more than those two points in the short article. I did change the settings in Guide to match what I had set in the Menu option. So this morning I changed everything to JPG-Fine and Small for the size of photo.

Can you tell any differences in the photos compared to yesterday. 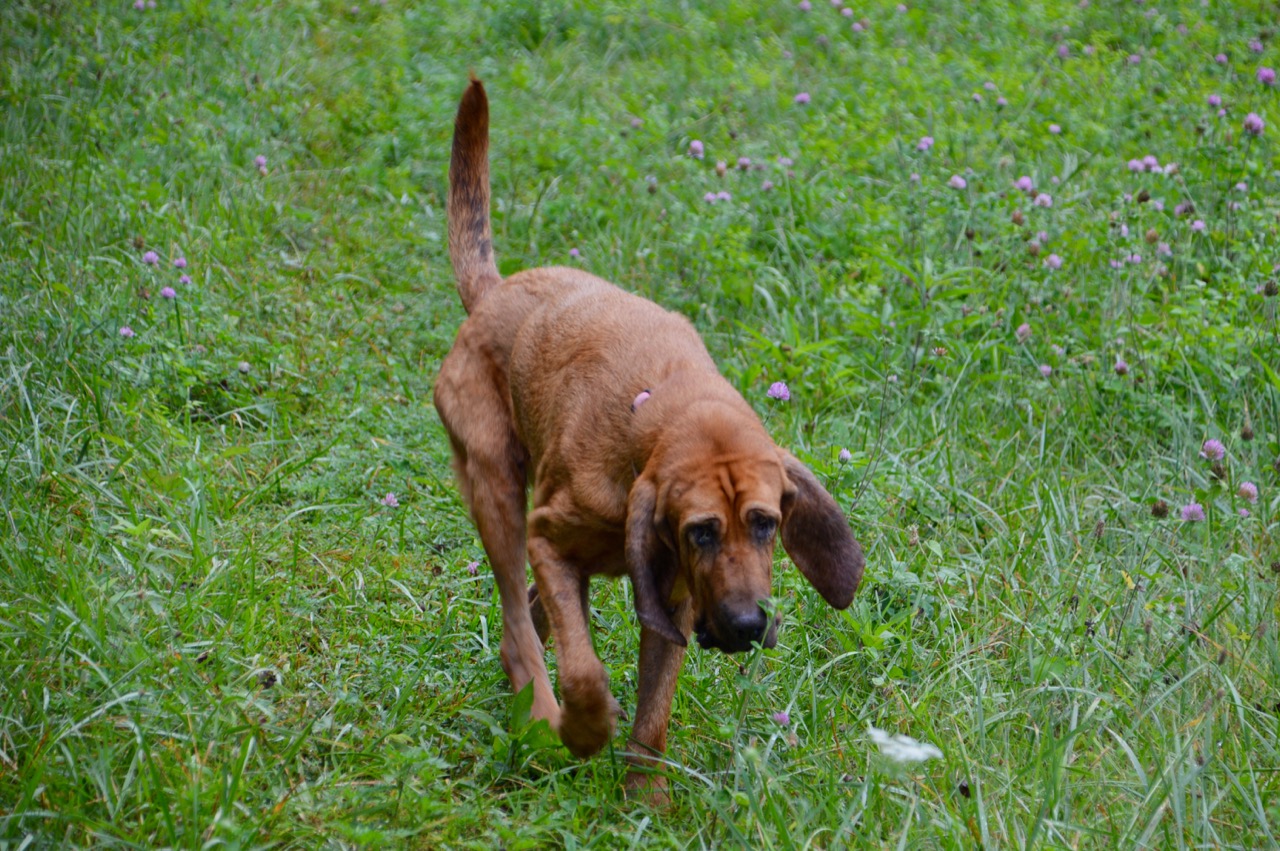 Last Wednesday afternoon while watching two baseball games at one time and texting to my friend that was at the Cubs game in San Francisco, I sent her a photo of my TV screen showing her the two 'pic n pic' that she does not get with DirecTV. Later as a test I used the 4 screen split. Sitting 8' away I could see them clearly enough to watch without leaning in closer to the tv for a better picture.

But like anything else that is electronic ... I couldn't get that larger TV screen idea out of my mind like I said in yesterday's post. Saturday morning after our hound walk I started my final stages of research by asking this first question.

"What is the difference between the 4K UHD and the HD I have now"?

After reading a lot of reviews, this site gave me the best explanation ...  Compare the two types

That lead me to wondering what size was best with me sitting 8' away ... actually 7'8" from my chest while sitting on the couch to the front of the TV screen.

This site answered a lot of questions and maybe not asked by many TV buyers who wonder in customer reviews and forums "why is my 4K picture not like the one in the store" ??  {I know the question mark should go inside the quotation marks} 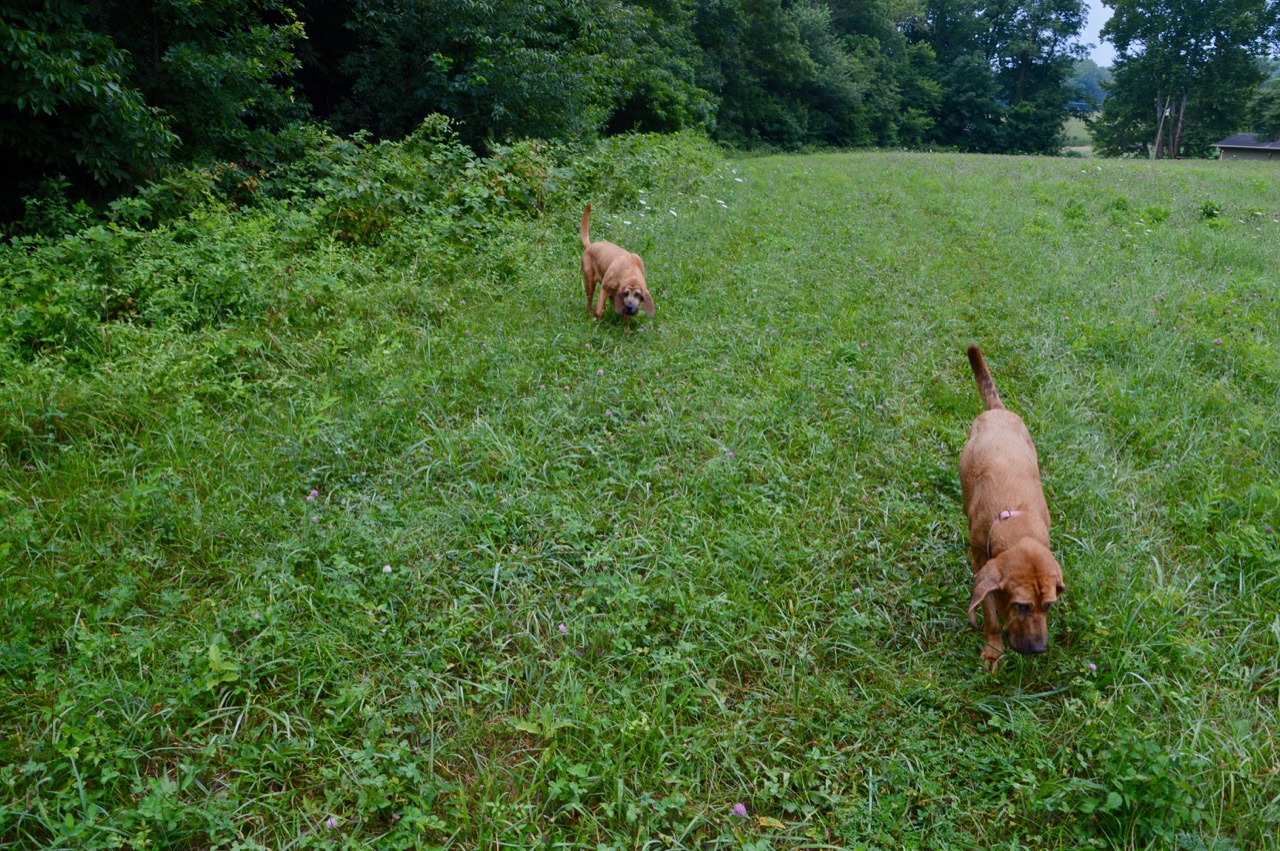 So after a couple of hours of reading I could see I was borderline on whether I needed a new TV. The chart showed me I needed a 65" for my eyes to tell a difference between HD and 4K UHD but to me, in my long narrow (15' wide) living room, that screen would be too big and not one I would want to look at sitting 7'8" away. I knew that I was not going to change my furniture arrangement because I had tried the only other option when I first moved in 20 years ago.

You will laugh at this reason ... plus the size of box for the 65" would NOT fit in the back of the FJ. IF ... IF I was going to by a new TV, I was picking it up at the store and have that thing up and running by the 4:15pm Reds game. 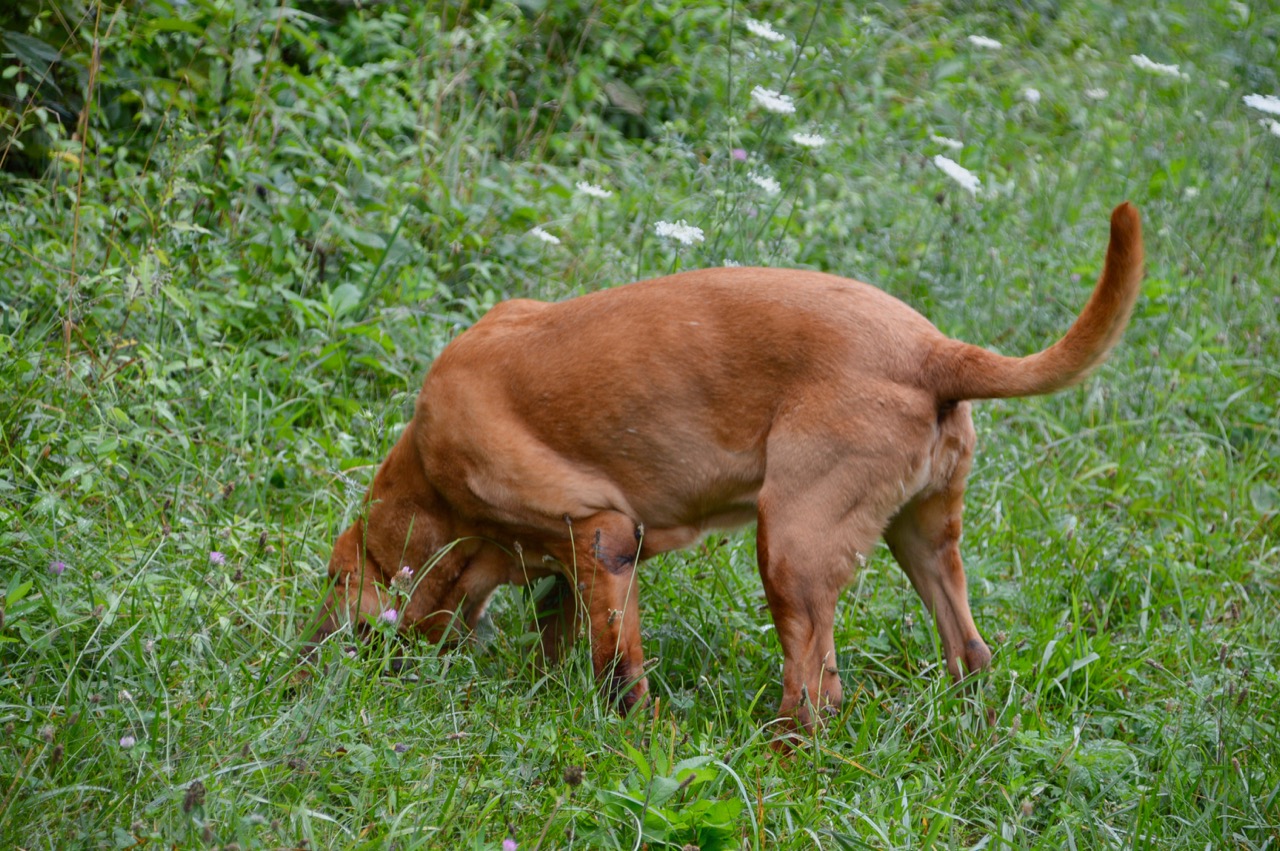 So that shoved me back to the 55" screen and at 7'8" the chart still shows I am still borderline on if it would make that much difference. 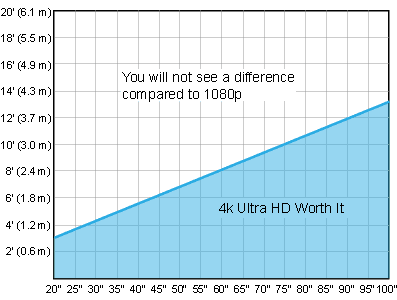 I have no complaints about my current 8 year old 46" Samsung. But you know how it is when you know deep inside you want to buy something, anything!!! LOL Whether it be a new computer, a different car or new car or RV ... is that addictive behavior rising to the top?? 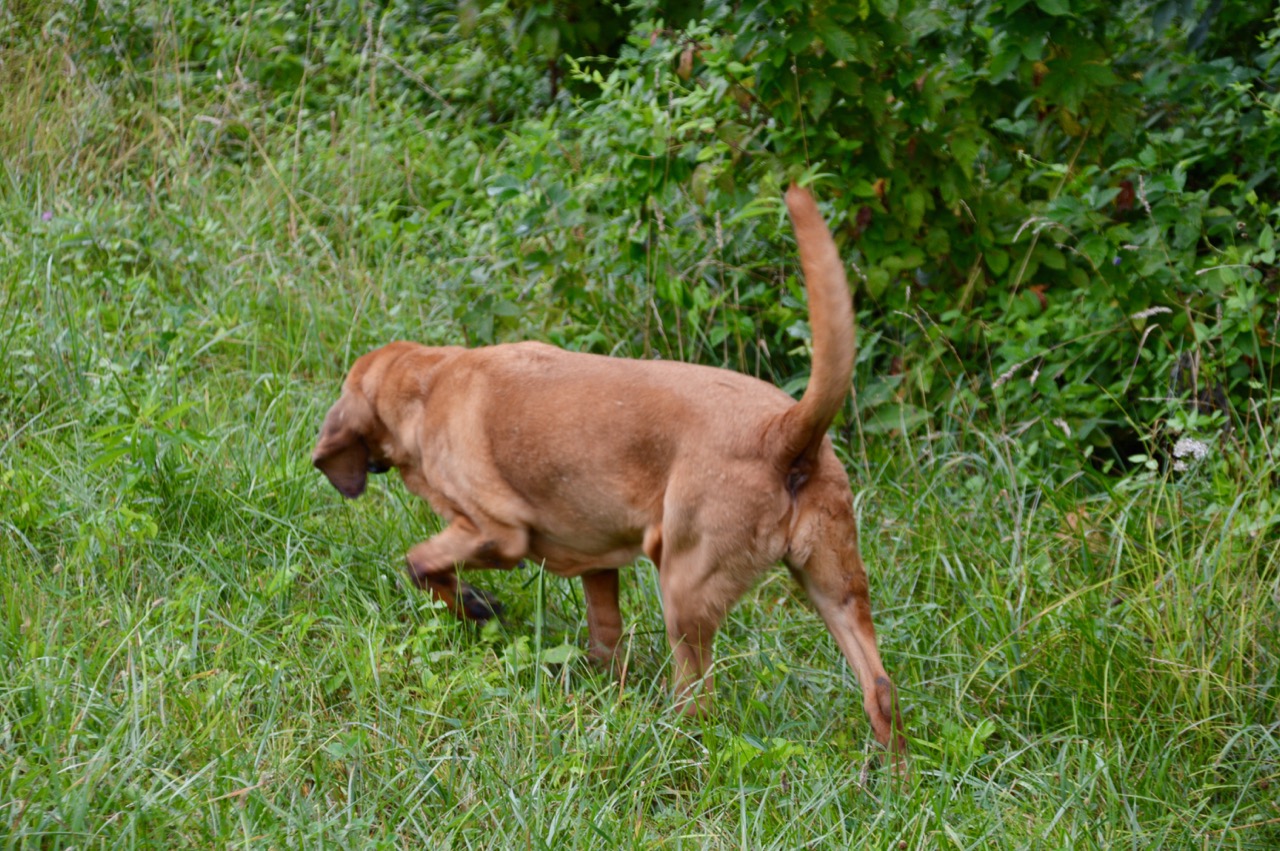 By cross-referencing customer reviews on Amazon, Best Buy and the websites of the specific brand name. I match those reviews with the 'Questions and Answers' on CNET and the website that I linked. I still had one more question though.

"What is the best TV to watch sports"?

I mean why not ask that question? Every review I was reading was showing some TVs were better for watching movies, than DVDs or some were better for sports, than movies. 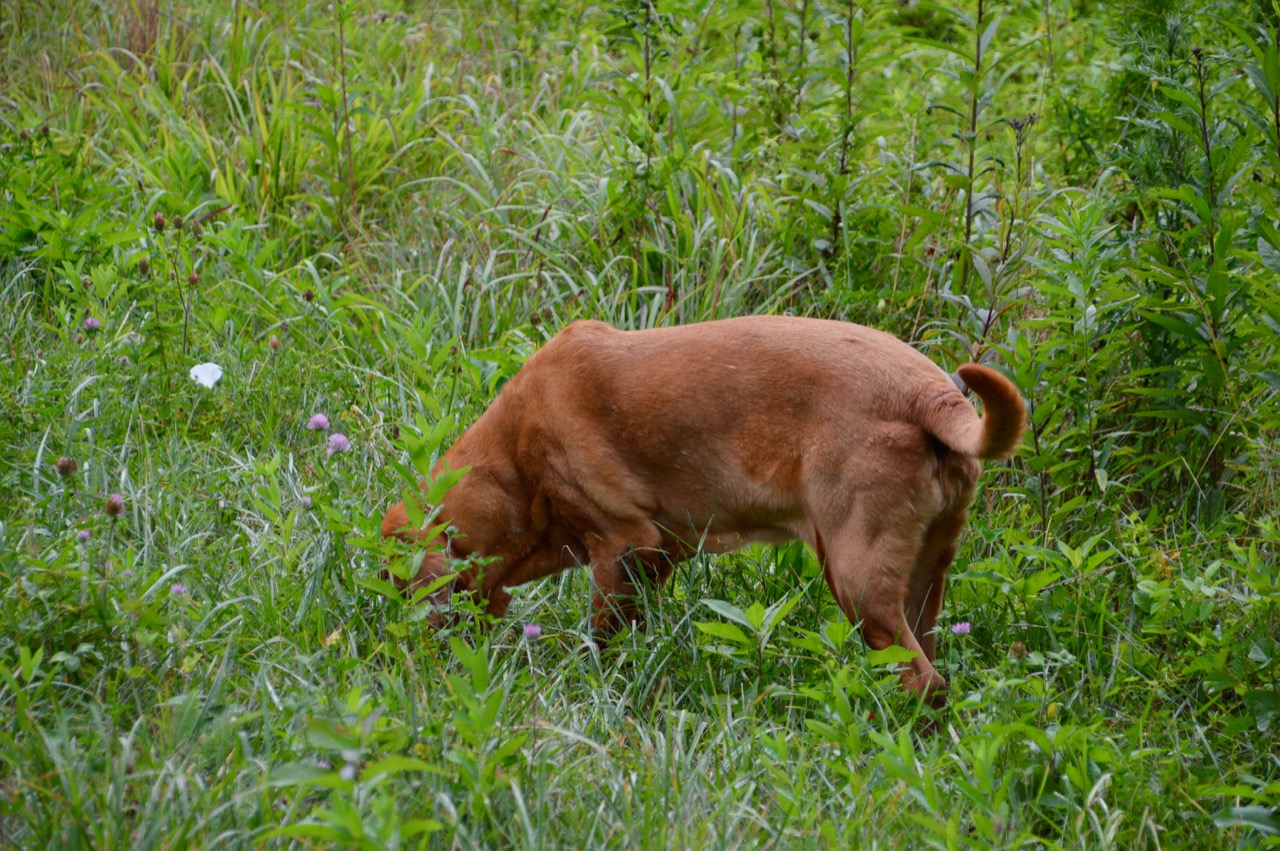 I had my answer right here ... in fact I had 4 of them that were recommended. Some of them were the same models other websites were showing. Would any of them fit within my budget?

Looking down through their 'Questions and Answers' section I had my answer ... not only that, one answer saved me from buying a model the day before when I almost bought a TV on Friday. I had my answer ... this buyer traded in the model I was going to buy on Friday and bought the one I had narrowed my choice to.

I called the automated system at Best Buy at my local store. Their answer for the model I wanted to buy was "Less than 3". I like Best Buy because I can return anything buy within 15 days, no questions asked and I get an immediate refund. They will also match price if I show them a cheaper price for the same model, even if it's a few days after I make the purchase. Plus I can pick it up at the store and bring it home. 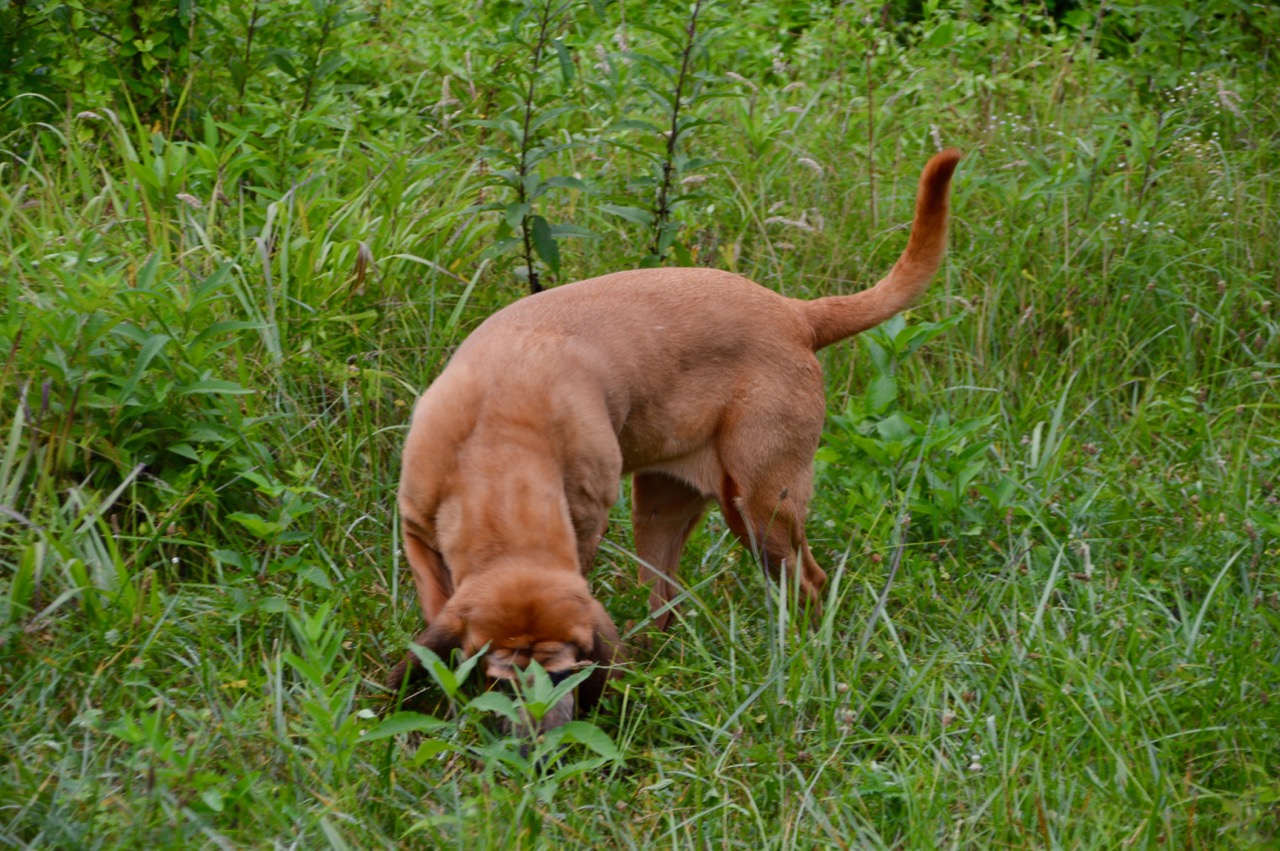 I checked all the specs, including the size of the box and saw there was plenty of room in back of the FJ for it to sit upright and a couple of straps to tie it down firm for the ride home. It was already close to 1pm ... ball game on at 4:15pm ... I wasn't sure if I had time and I didn't want to miss the Reds game. 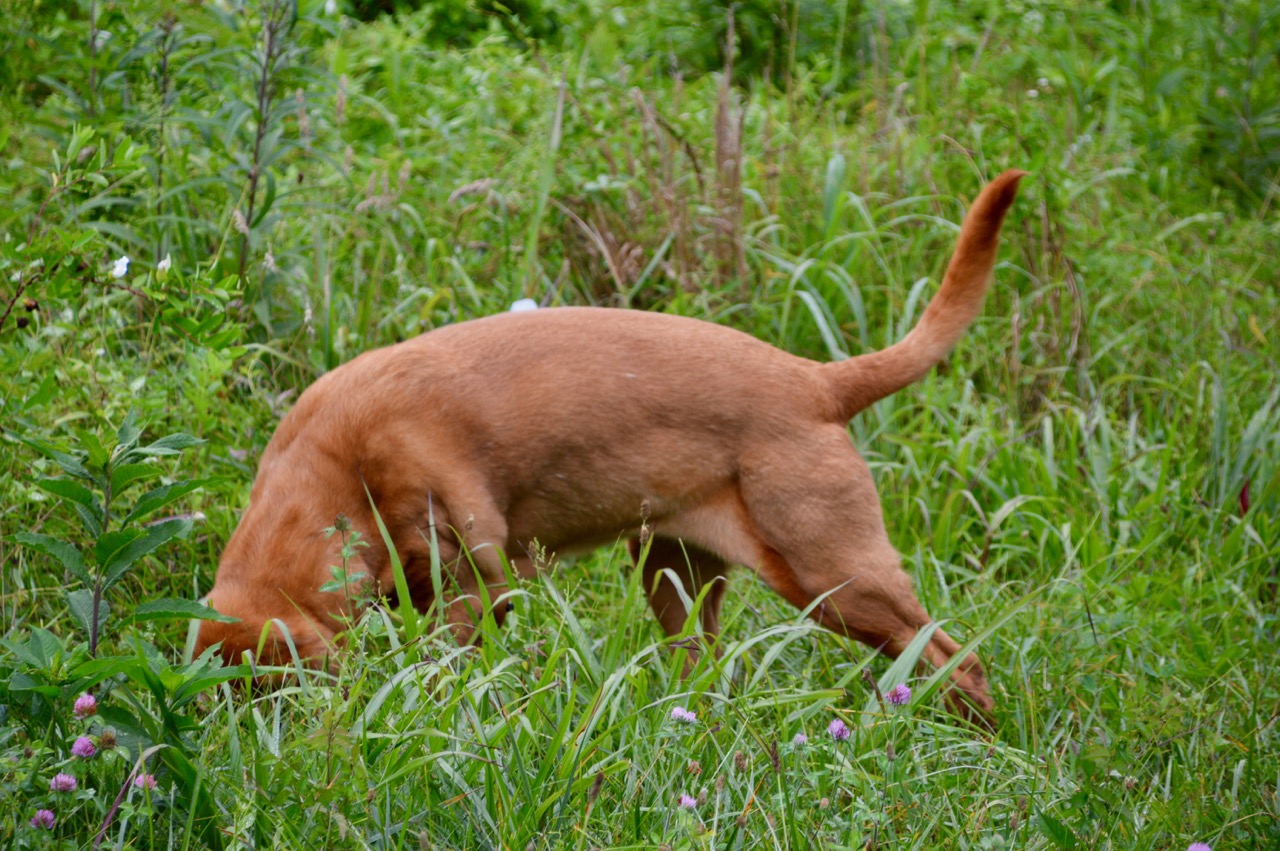 IF any of you are looking to buy a new TV, I hope the information on those links helps you in some way. I am not paid in anyway if you click those links and they are safe to open.

A few weeks ago I had this same overwhelming urge to buy a new camera, maybe a small point and shoot or the midsize point and shoot with a zoom lens. After researching and changing some settings in my Nikon D3200, I resisted the urge to buy a different camera and moved on. I found after a couple of adjustments that my photo quality was still just as good as September 2014 when I bought the camera. 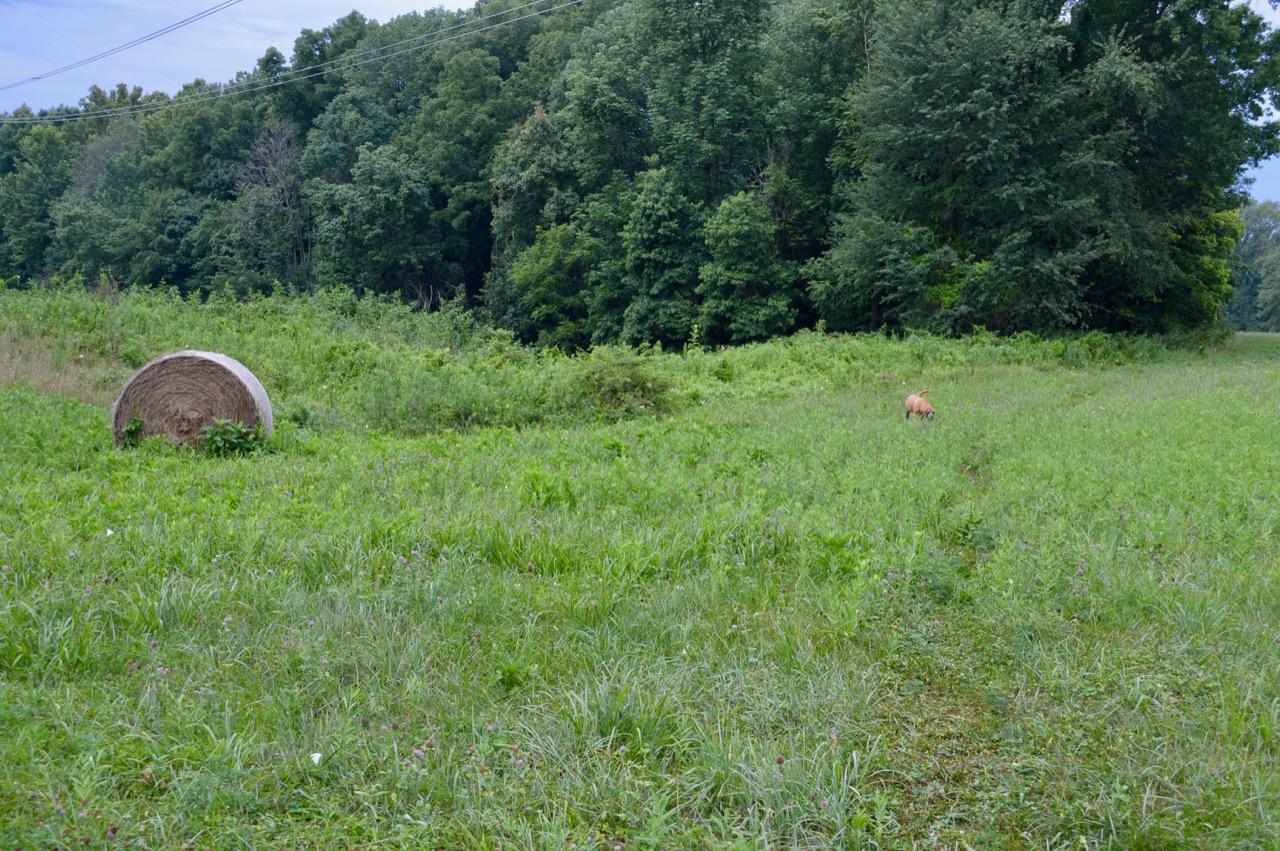 Like I have said many times ... Sadie might lag behind me in the walk at times but without ever calling her, she always runs to catch up with Stella and I. 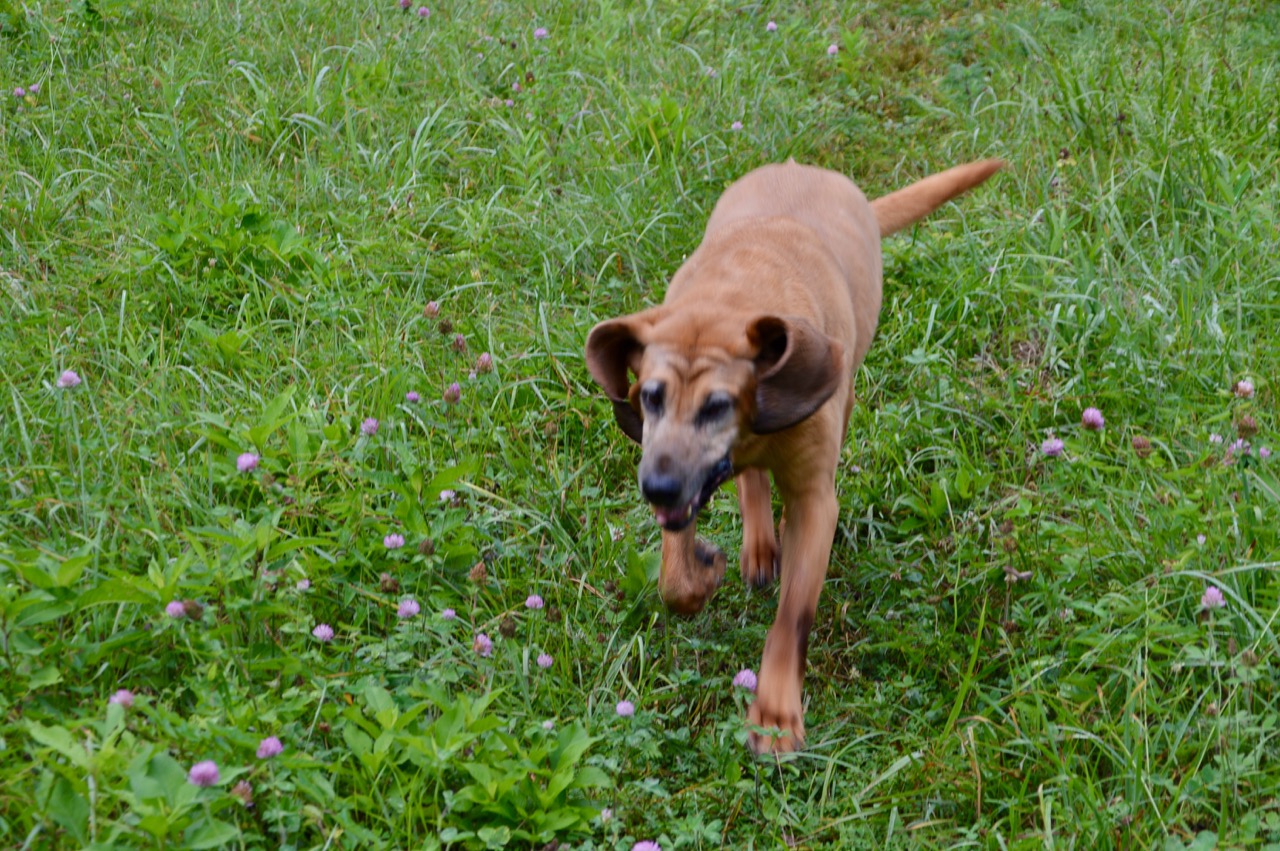 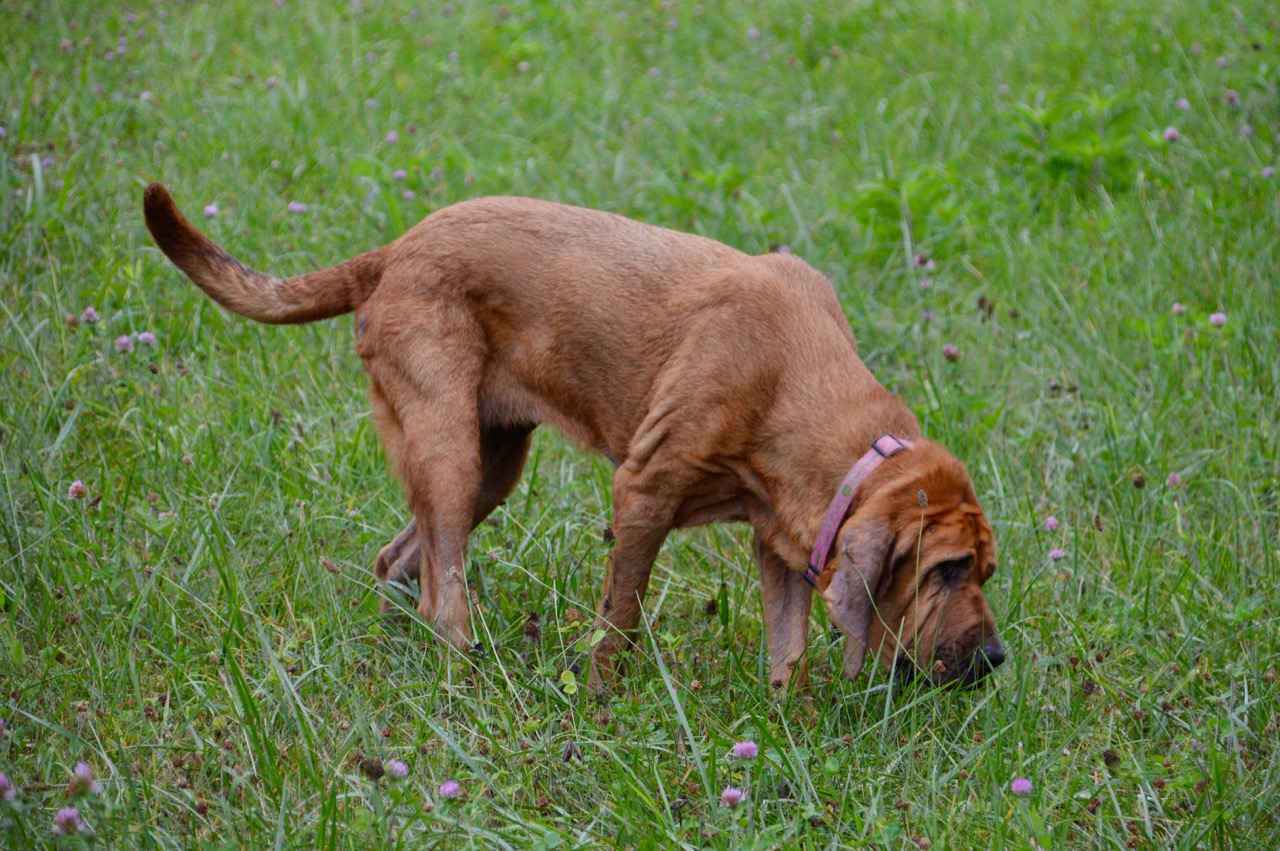 In the meantime Stella continued her 'slow' exploration ... I am still amazed how slow she can walk. 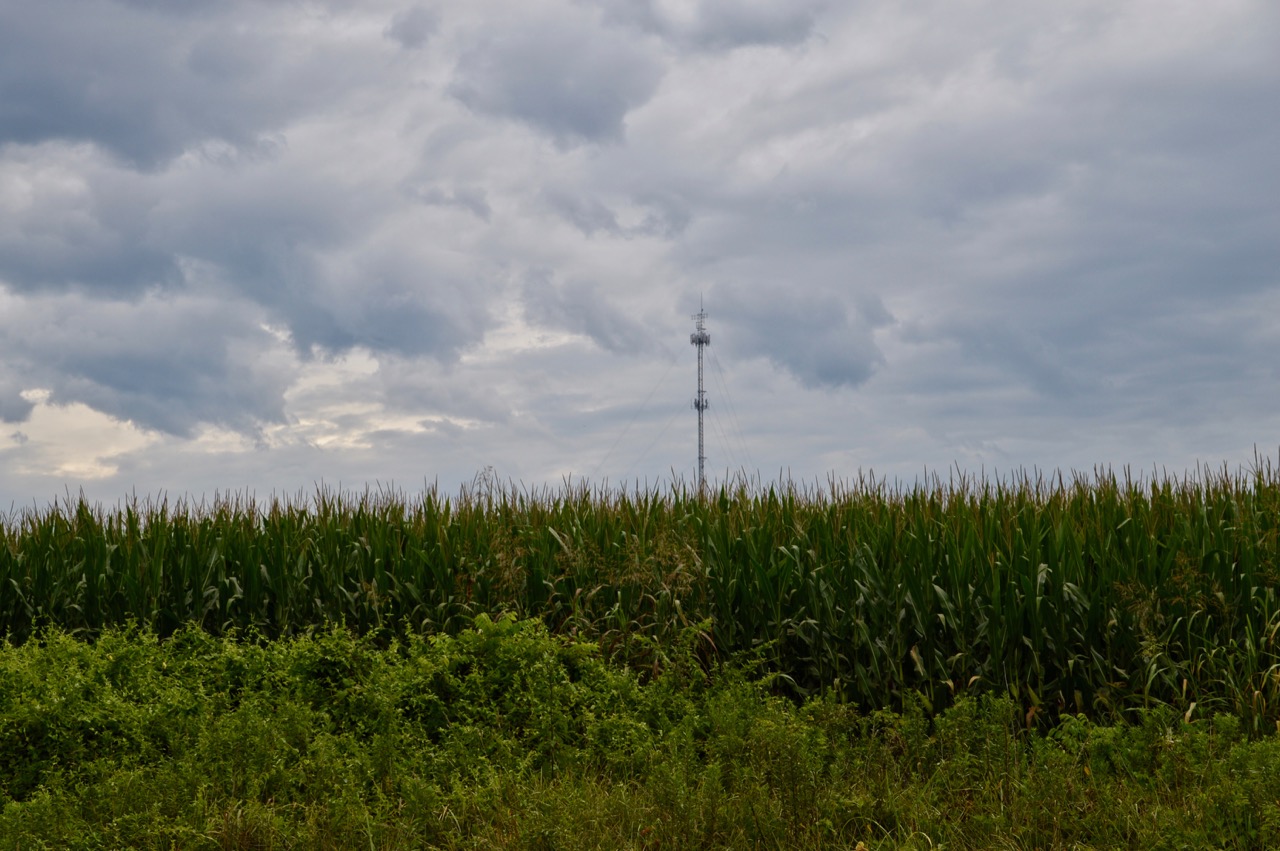 This is facing NE but with the winds blowing from the SW, this will not be the source of our upcoming storms. 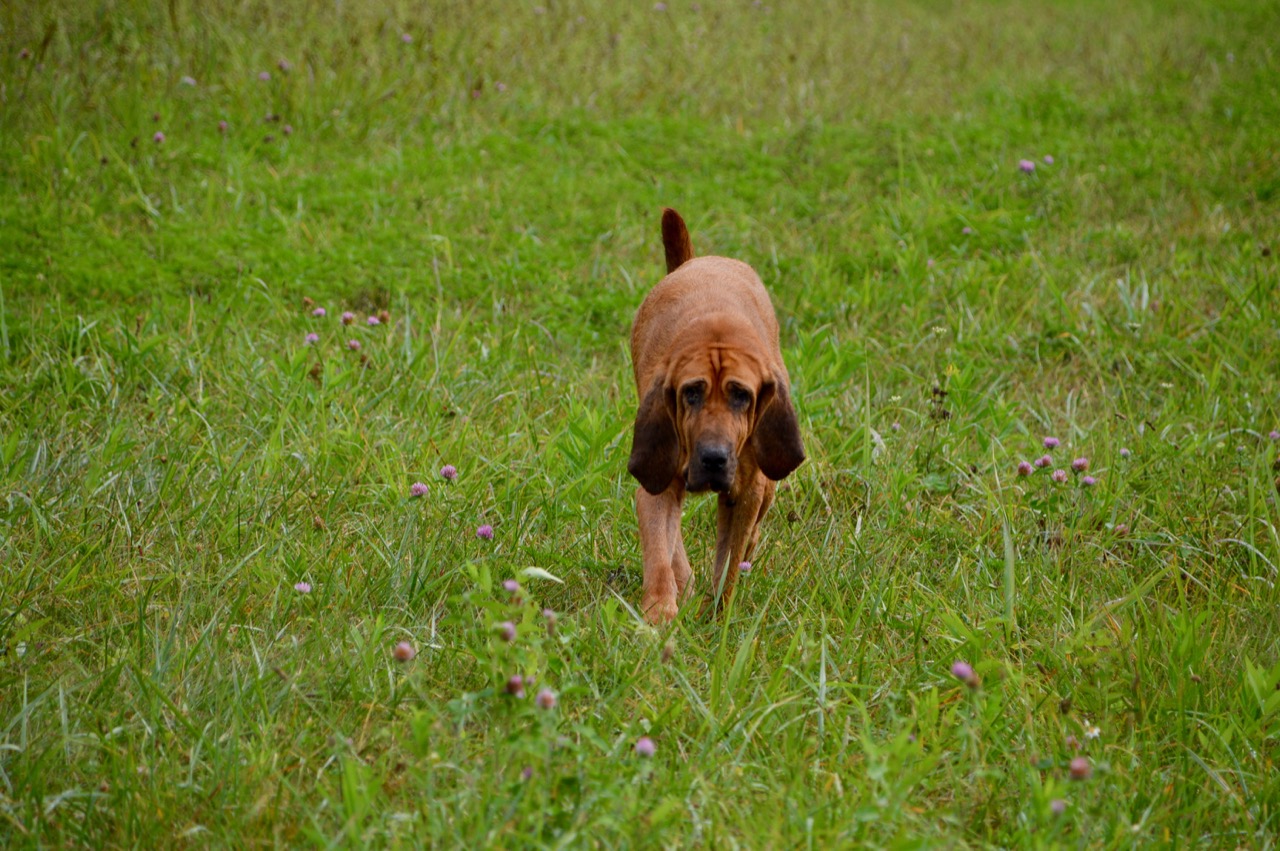 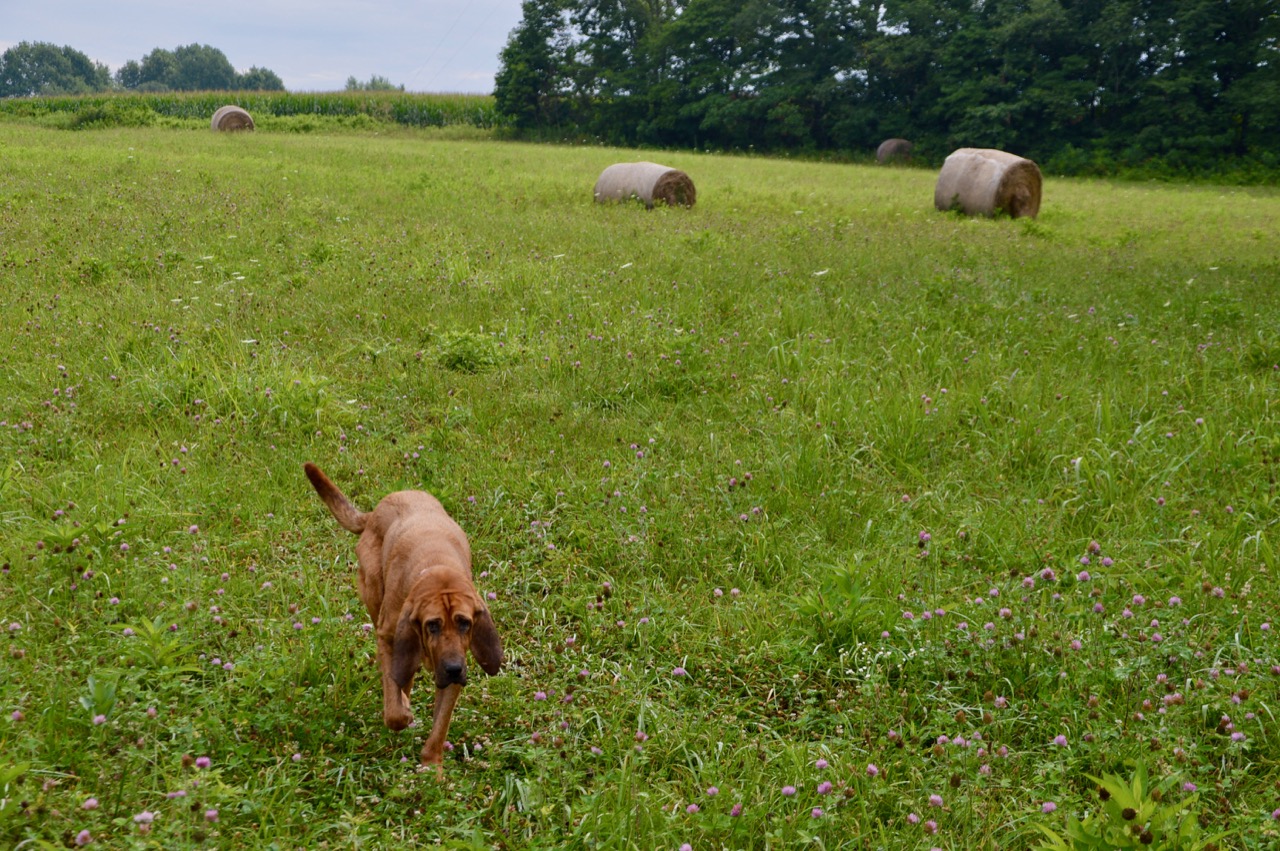 Can you tell by Stella's photos just how slow she moves?   LOL 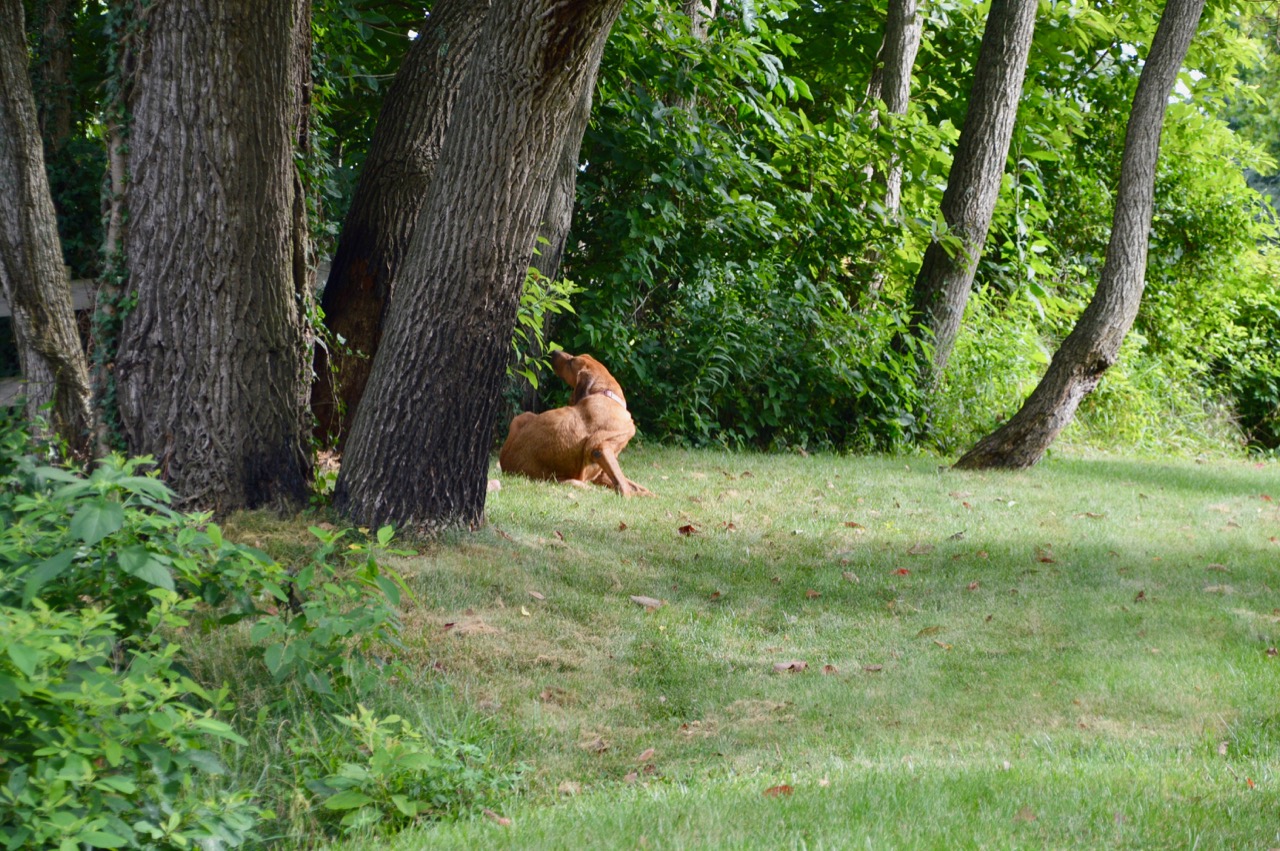 Standing with Sadie at the corner of the house after our walk, waiting on Stella to show up ... I glanced toward the trees from the house and didn't see her. Had she wandered off toward the neighbor's house, a place I have intentionally kept her from?

Luckily she didn't. I took a few steps into the yard and there she was hid behind a tree doing her daily scratch in the same spot of the yard after every morning walk. 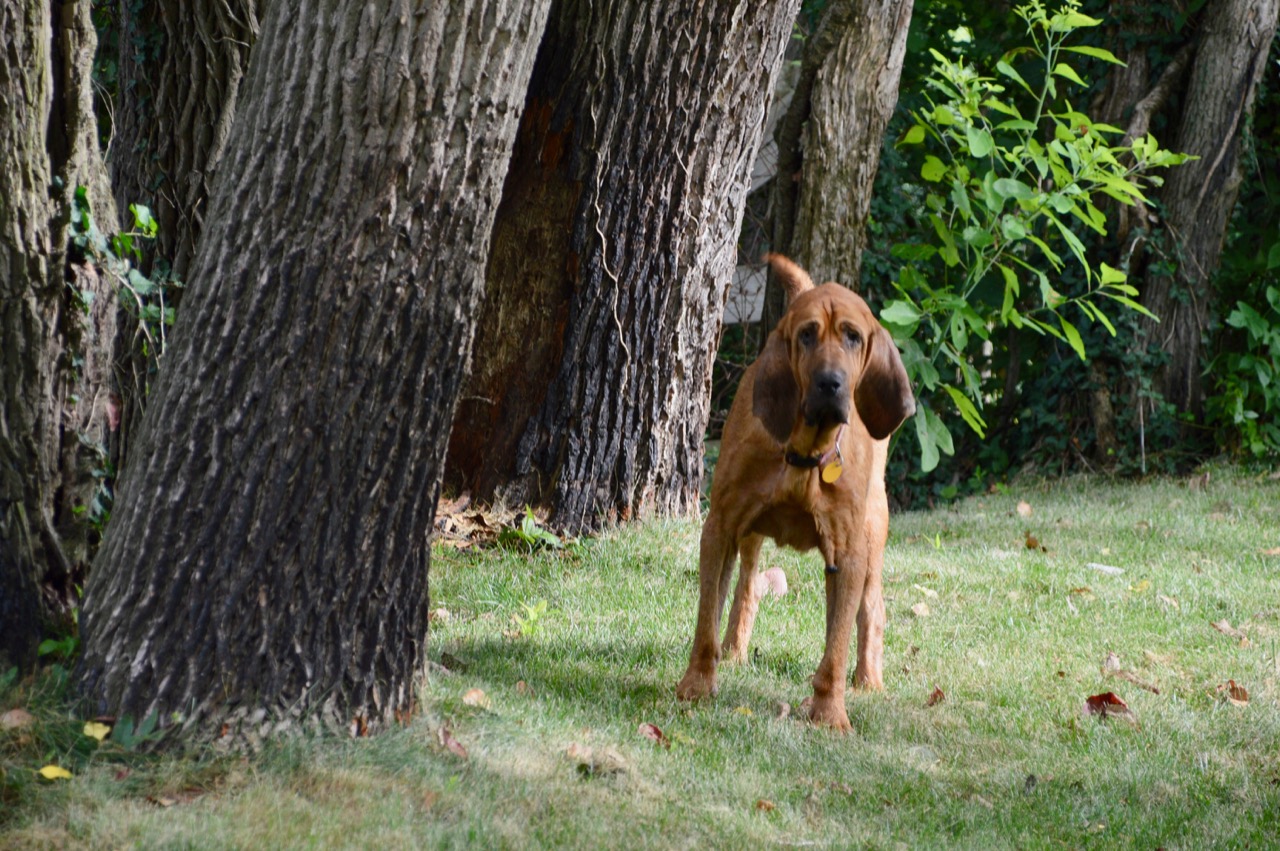 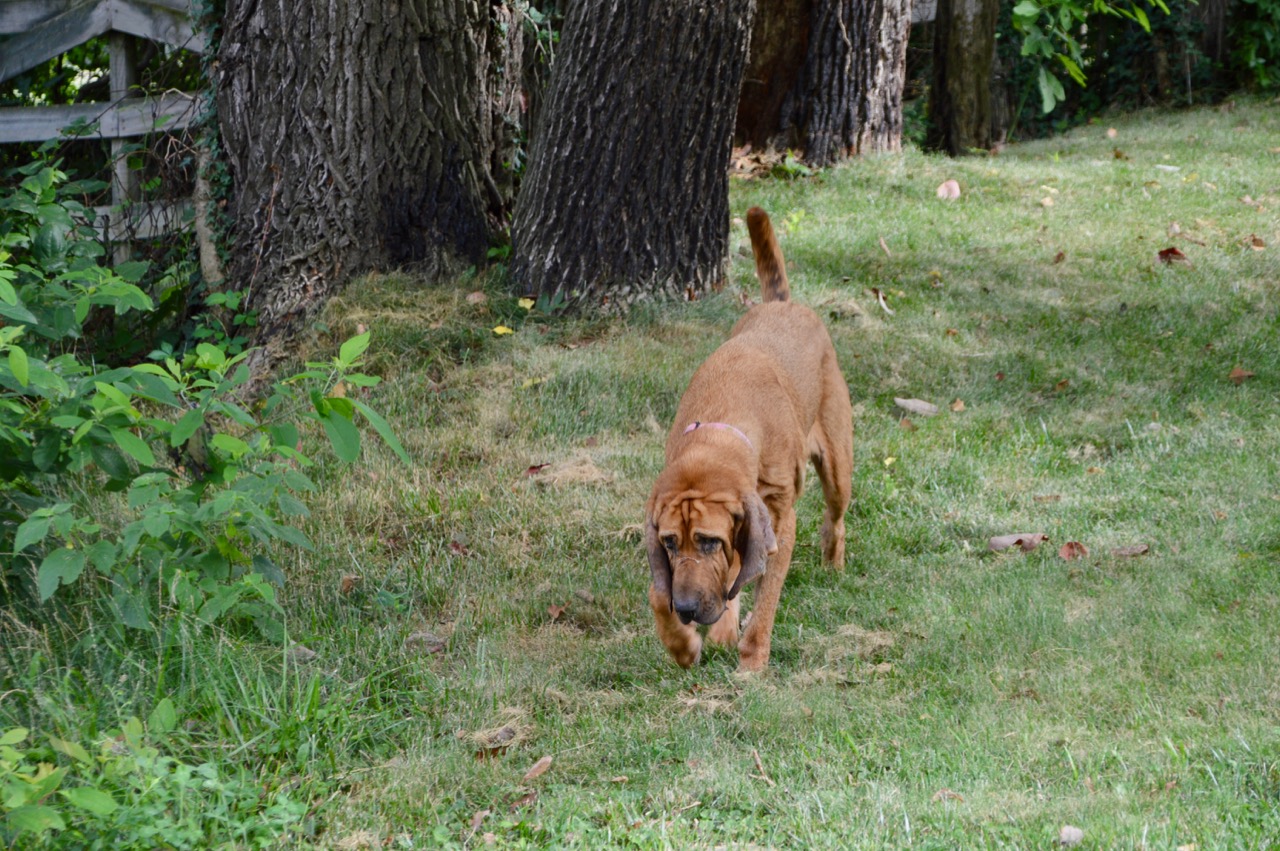 "Okay then, I'll come inside"

If you want a free tour of France besides reading Contessa's blog with pictures of their recent European vacation ... tune into NBCsports channel ... and watch the Tour de France. It will be on almost every morning and later that night for the next two weeks. Yes, it's a bicycle race and if you have never raced or know about the sport you wonder what is the use ... they are just riding a bicycle like you would around your neighborhood when you were a kid.

They aren't and there is much more going on in that group of riders as far as team strategy but I'll not explain why. That is not why I told you to tune in.

From the helicopter cameras that follow the race, they show the most beautiful country side in France, the small towns and the great buildings ... I like seeing the scenery as much as the race. When I raced at the amature level in the 70's ... 3-time TOF winner Greg LeMond was only 15 years old beating older professional riders in the USA in California.

While we waited for the rain, Heidi slept, Sadie slept, Stella slept while I watched the TOF Stage 9 that was taped at 6am this morning. Reds baseball from St Louis will try to play a game around the rain, which will followed by the Cubs game in San Diego. My favorite team, the Cincinnati Reds started the season 3-18 ... in their last 30 games they are 21-9, the best record in baseball.

48 days until College Football starts. Sports addiction is a much better than a lot of other stuff I could be doing. What can I say ... it keeps me off the streets and out of trouble.  LOL