Sadie Has A Lipoma - Vet Trip 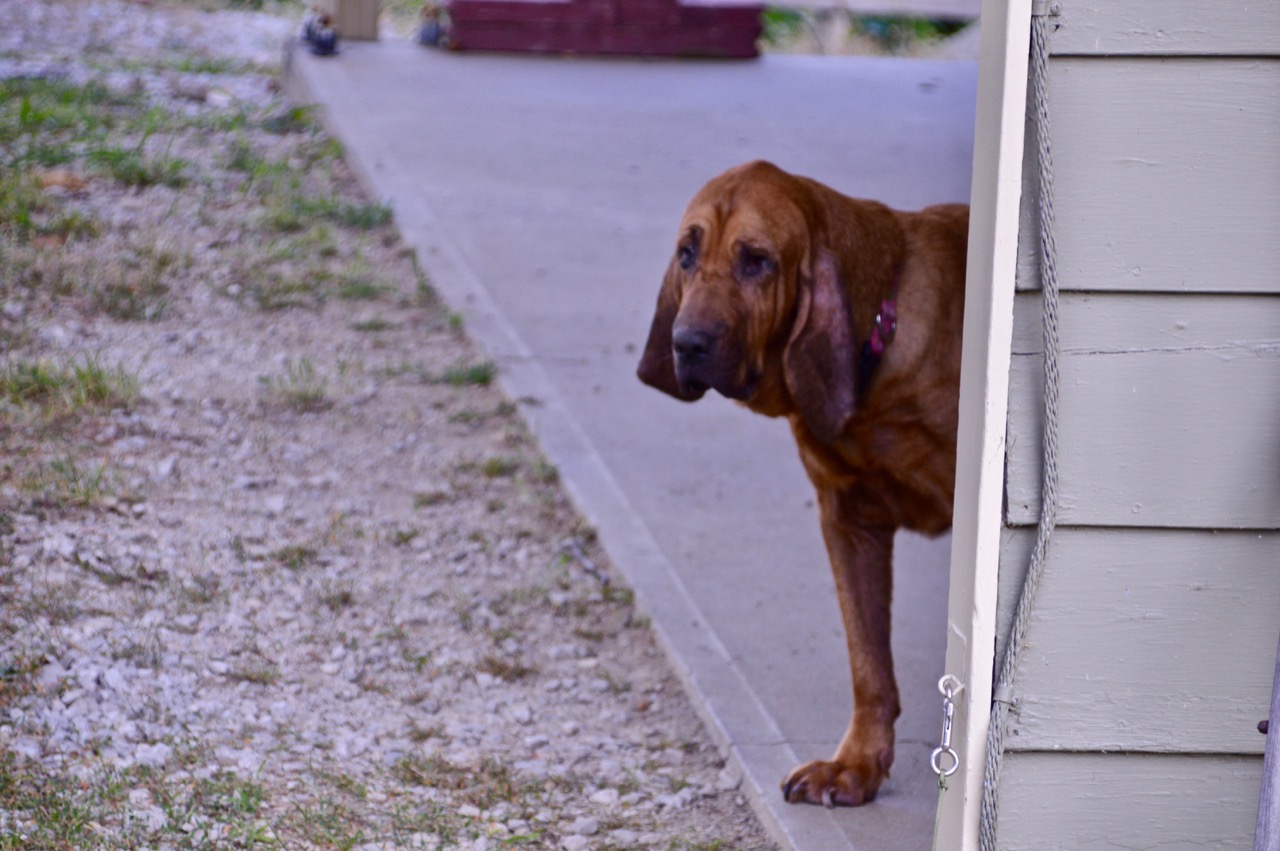 The morning didn't start different just because Stella did not want to go on the morning walk. It all started when I got up and stayed up a little before 5am. I couldn't sleep so I decided to use the free data period to download the macOS beta version to my MacBook Air since it seems to be working so well on my iMac. All the hounds slept until 6:15am when they figured out I was awake and could feed them food. 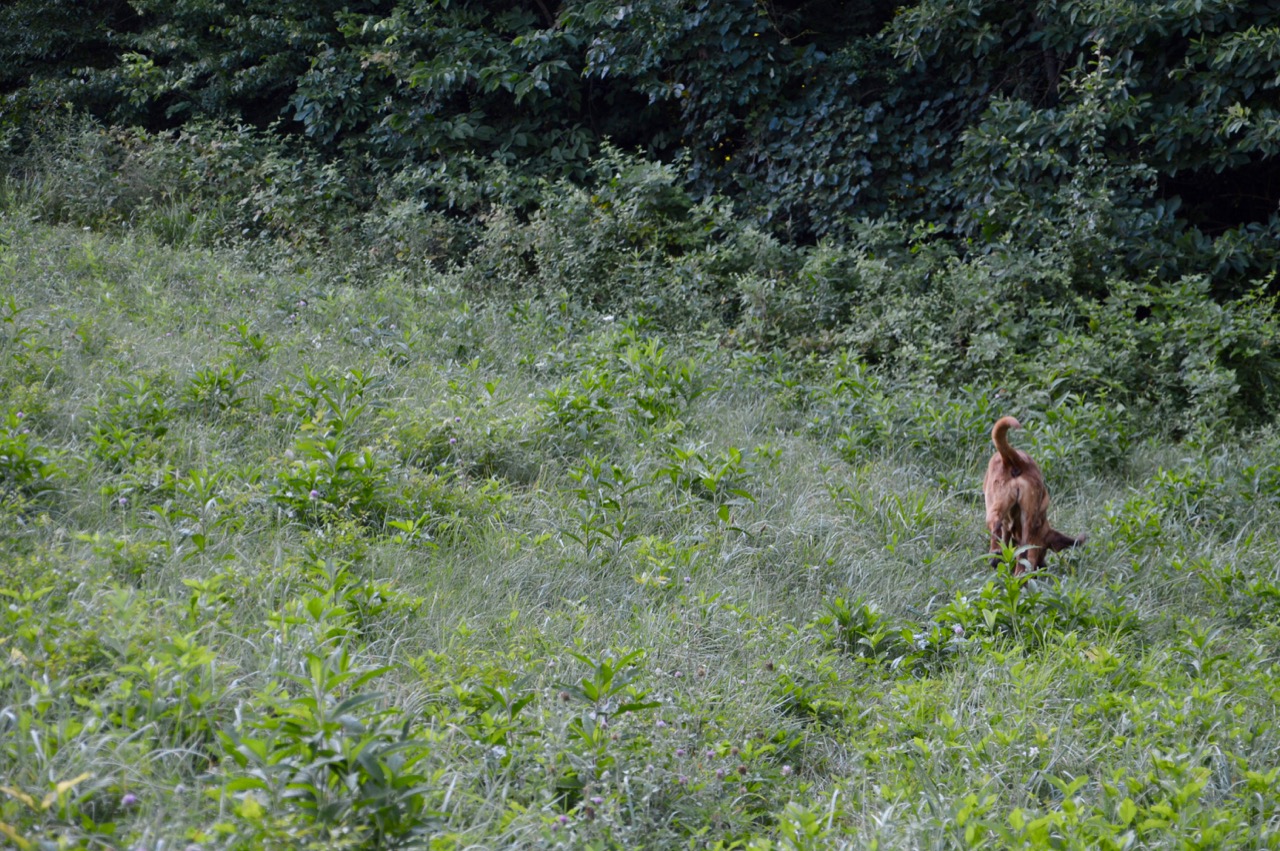 They did their normal routine of going outside as soon as they woke up while I pour the breakfast kibble into their bowls. Everything was right on schedule. As I was standing next to Sadie while she was eating I noticed on her right side near the bottom of her stomach was a pretty good size lump. I rubbed my hand over her left side that was normal so I could tell the difference.

She did not show any signs of pain when I rubbed over the lump and I could tell it was soft. It seemed to be outside of her stomach but close to the skin. I knew I needed to have the vet take a look at it. Luckily when I called to verify their walk-in hours, they had changed to 9am so I could drive over immediately instead of waiting until 2pm. Since Stella was due an annual checkup I decided to take her with us get their shots at the same time. 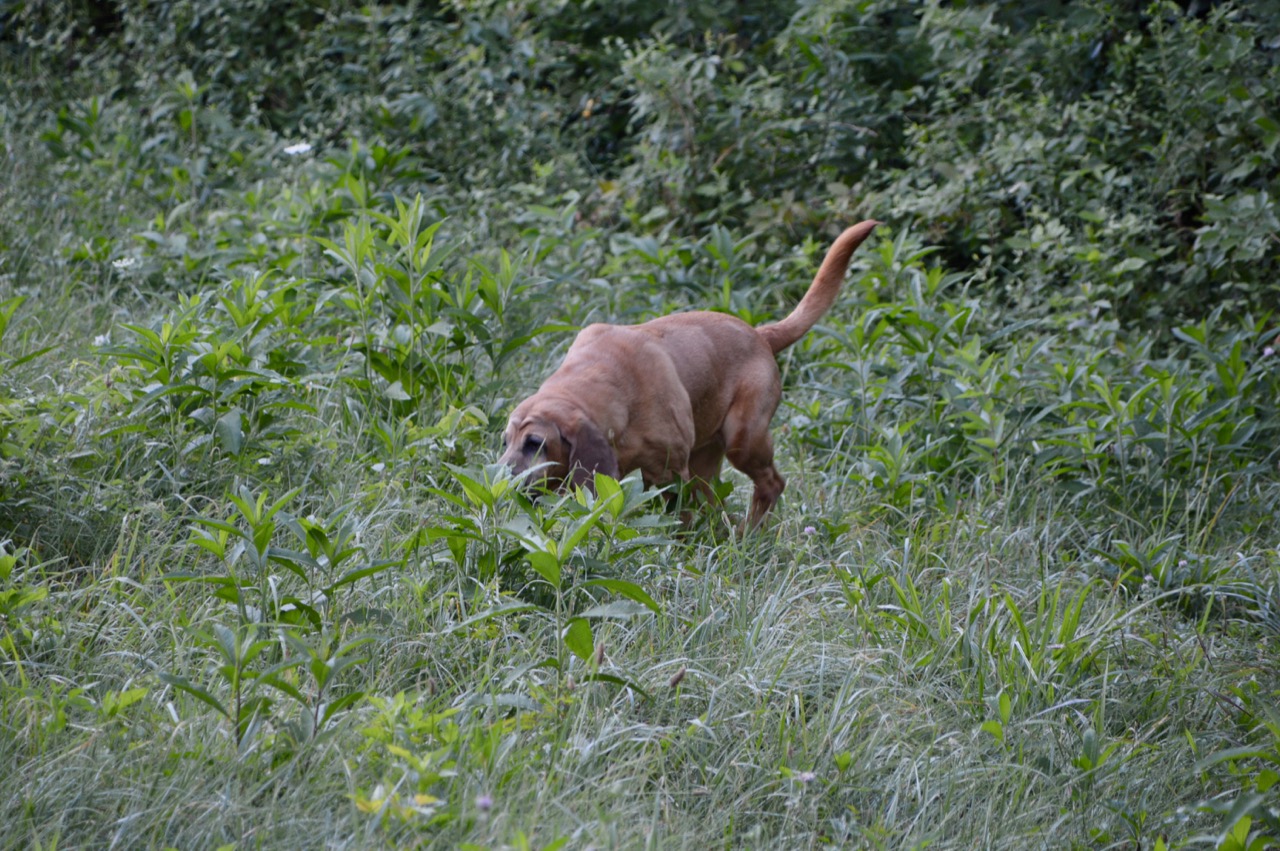 That top picture shows Stella barely looking around the corner of the house when I called her name. Sadie and I were ready to go and Stella was not around. As I walked back toward the house she was sitting in the carport just a foot away from where that picture was taken ... acting like she was hiding from me. As I approached her and telling her "let's go for a walk" ... she turned and headed for the door to go back inside. So that is where I put her and I left a little confused. 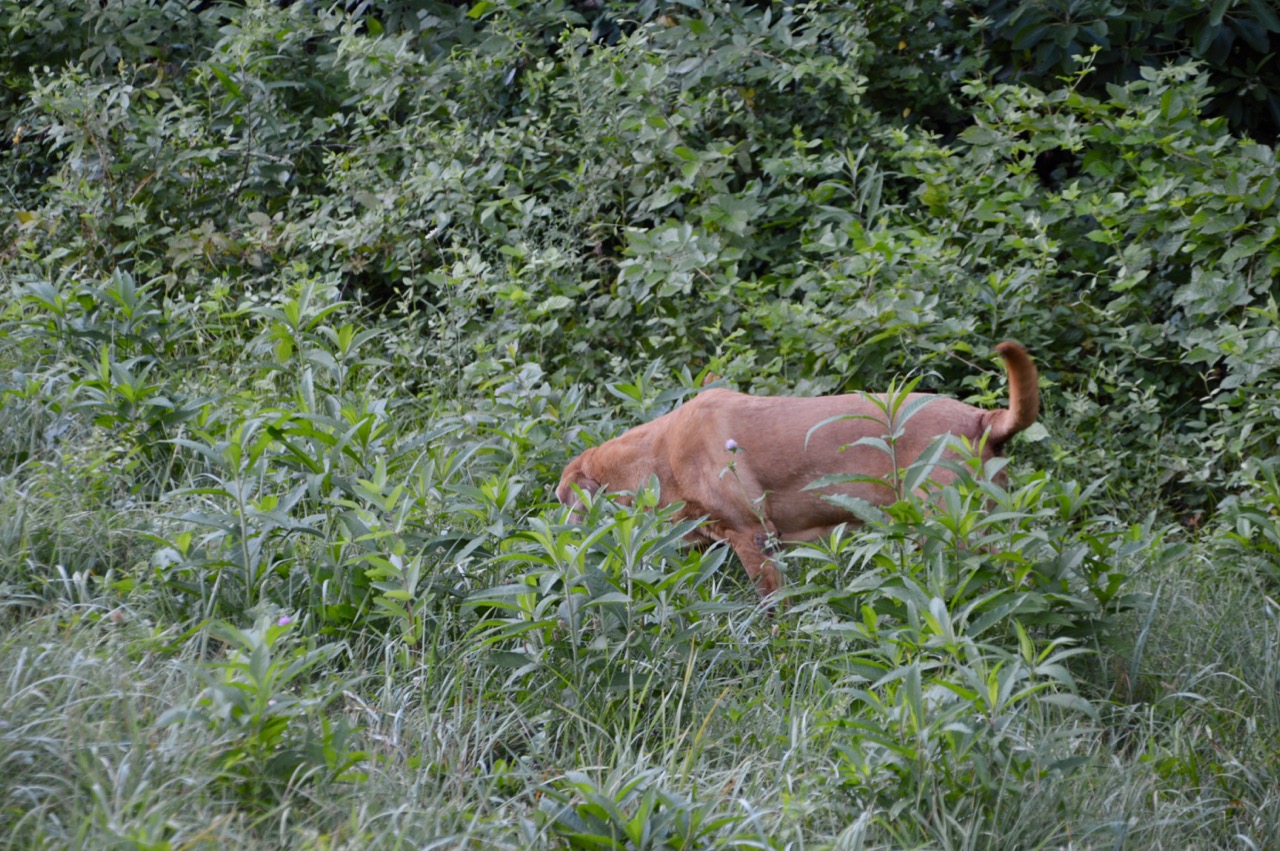 Sadie didn't mind though ... she is walking and that is all she cares about. As we walked I kept trying to look at her right side to see how that lump acted as she walked, trotted and ran. I did not see any changes in the size of the lump nor did I see Sadie flinching as she trotted in the field. 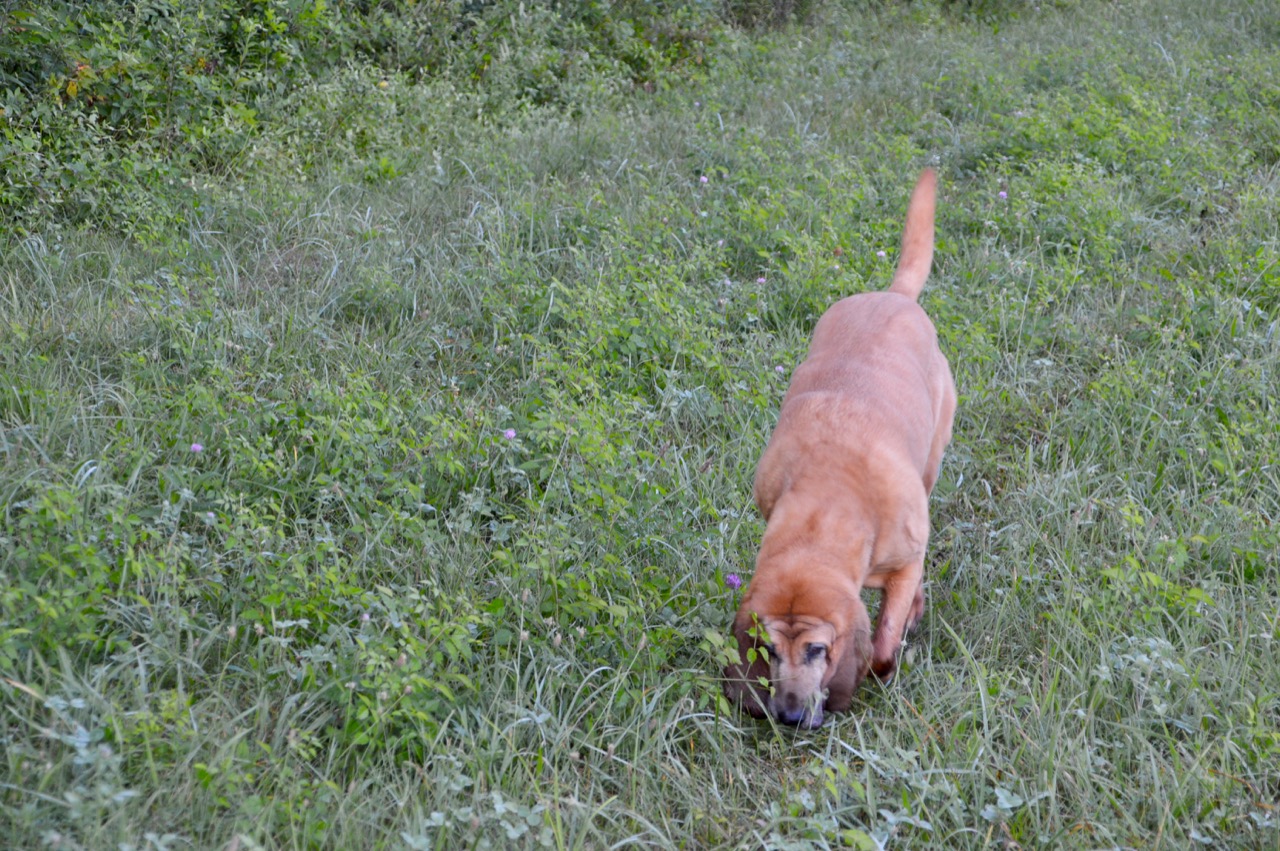 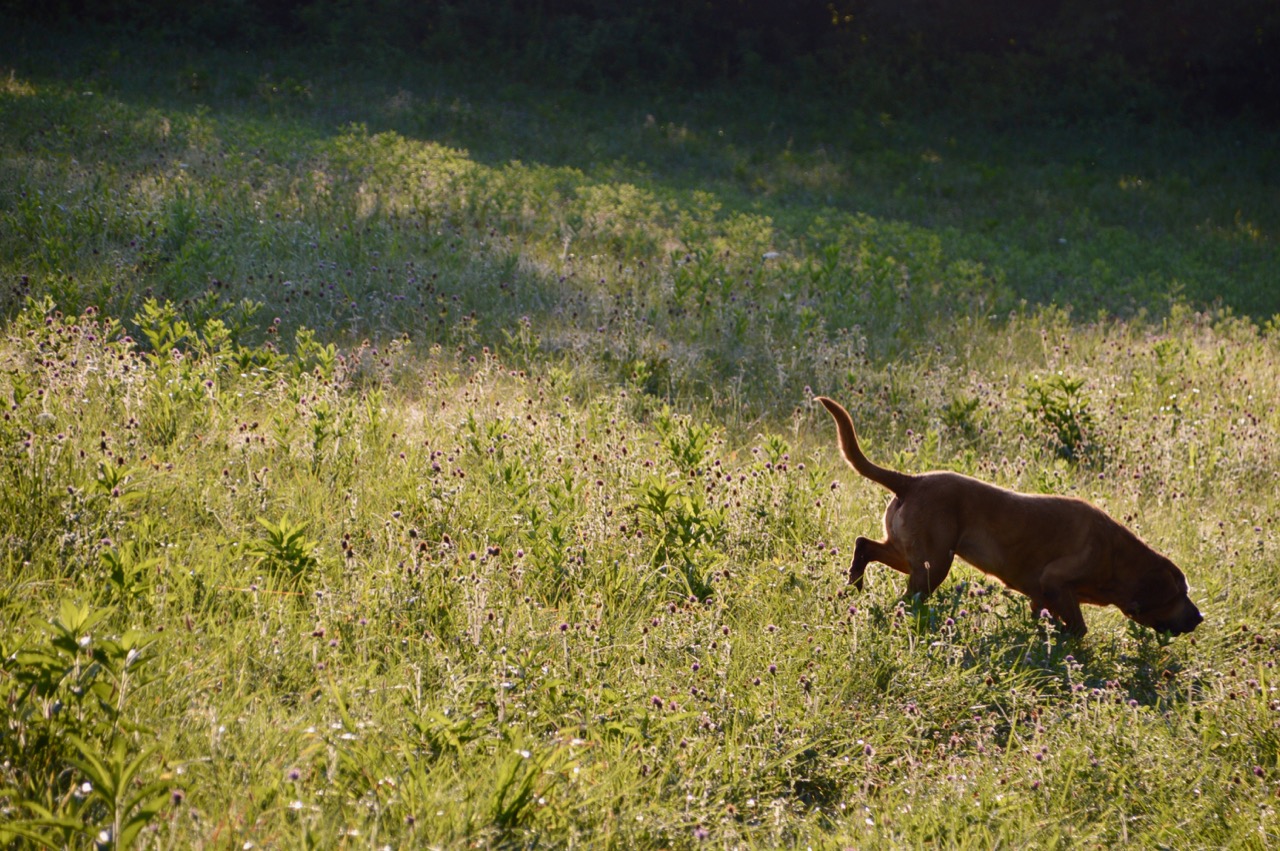 It's funny that each time I tried to take a picture of her right side she would keep turning so I could only see her left side. She also did that this morning inside when I was trying to get photos of it. 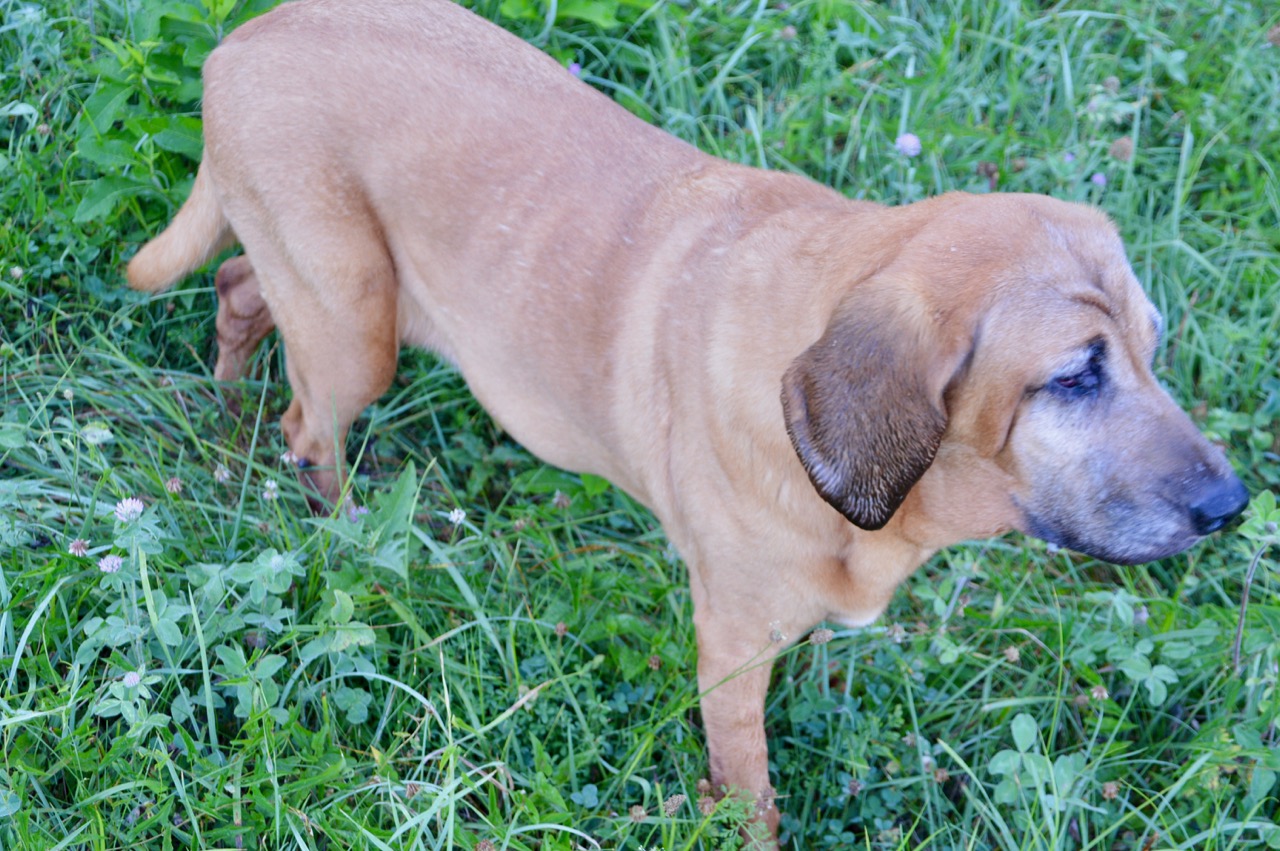 If you look closely you can see it lower middle ... once you see the photos below of her left side you can tell the difference. 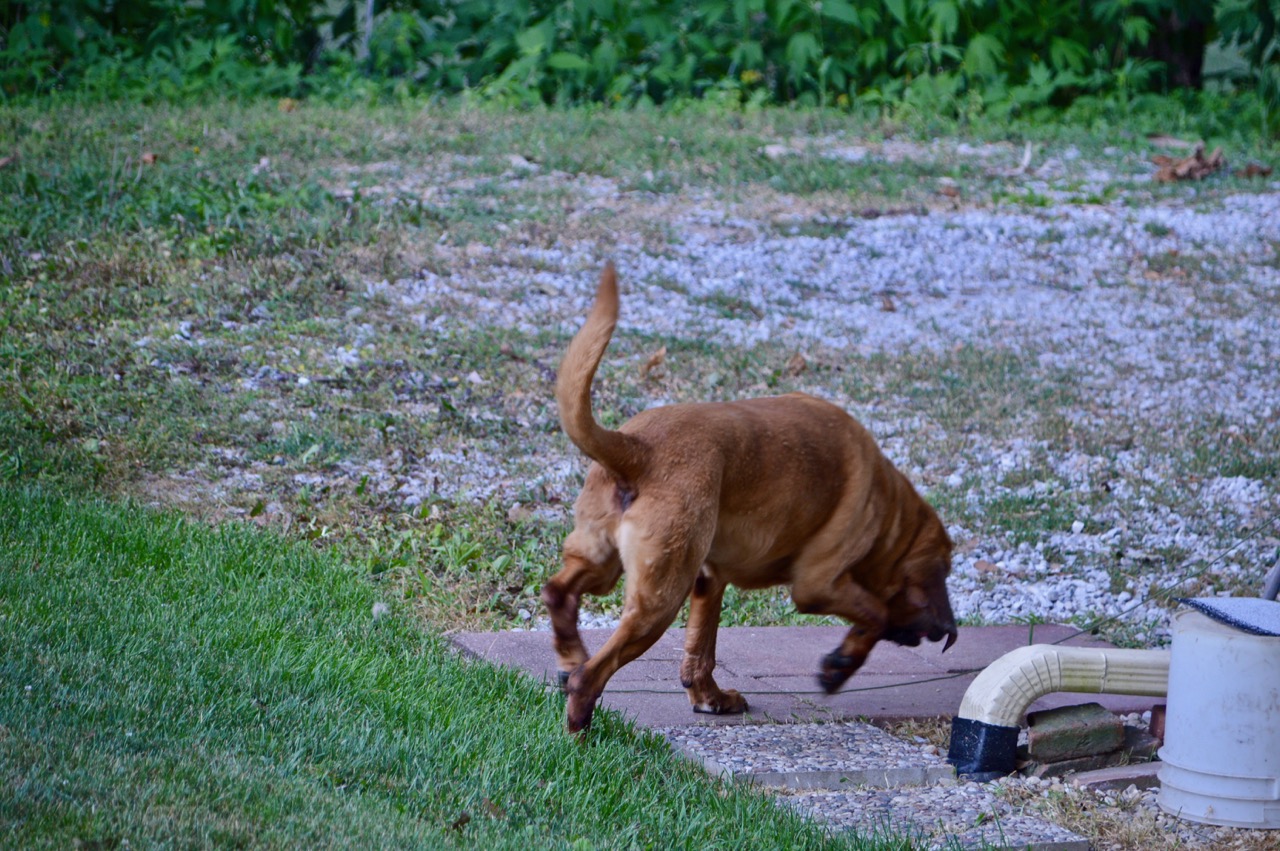 By the time we got back to the yard Sadie realized that Stella was not there and took off for the last place Stella was standing. When I got to the door I looked in the window to see what Stella was doing. She was sitting here with her head down like she does when she is pouting. As soon as I opened the door her and Sadie were very excited to see each other ... and of course Stella wanted to go outside. 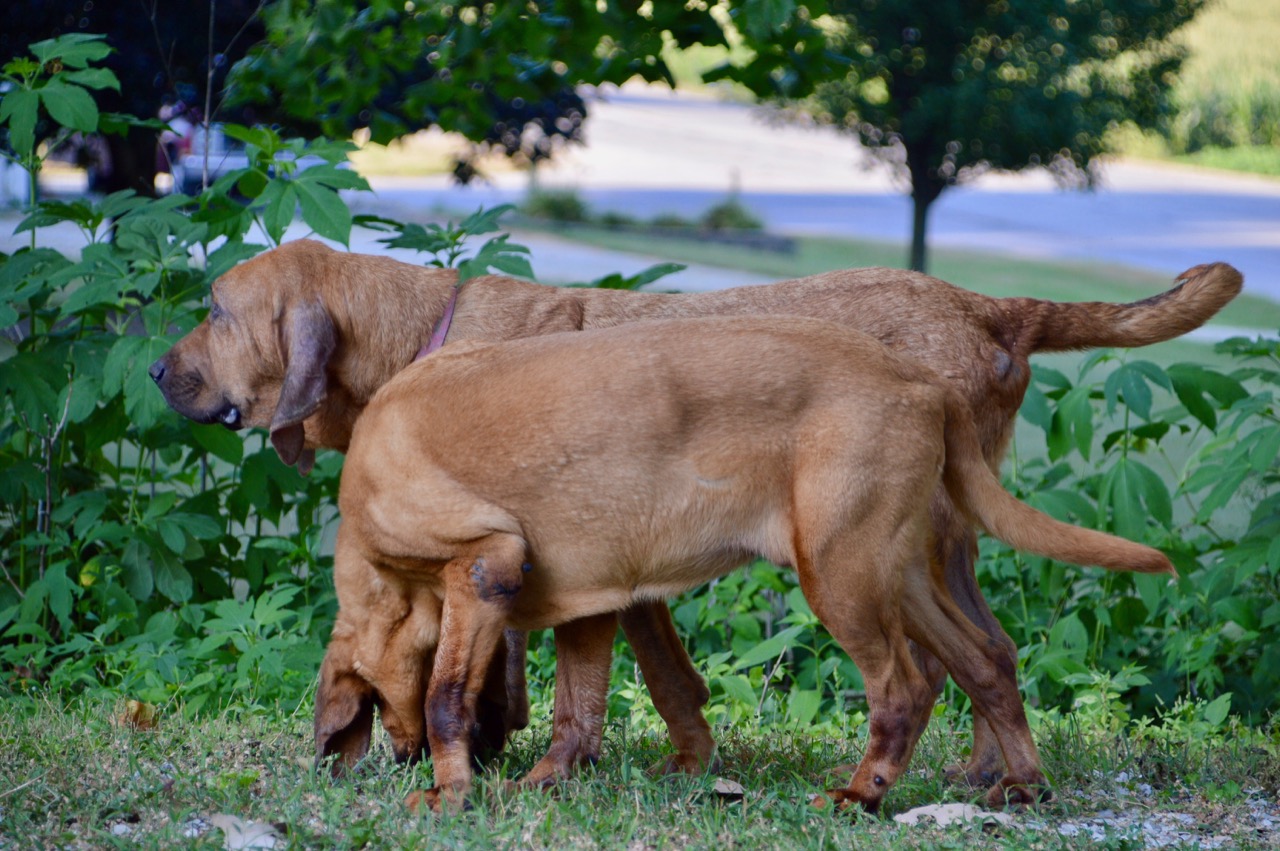 On the left side you can see how Sadie's stomach line goes straight back. I sat down in the outdoor chair thinking that Stella might go out into the field or even try to wander to the neighbor's backyard but she was onto something else. 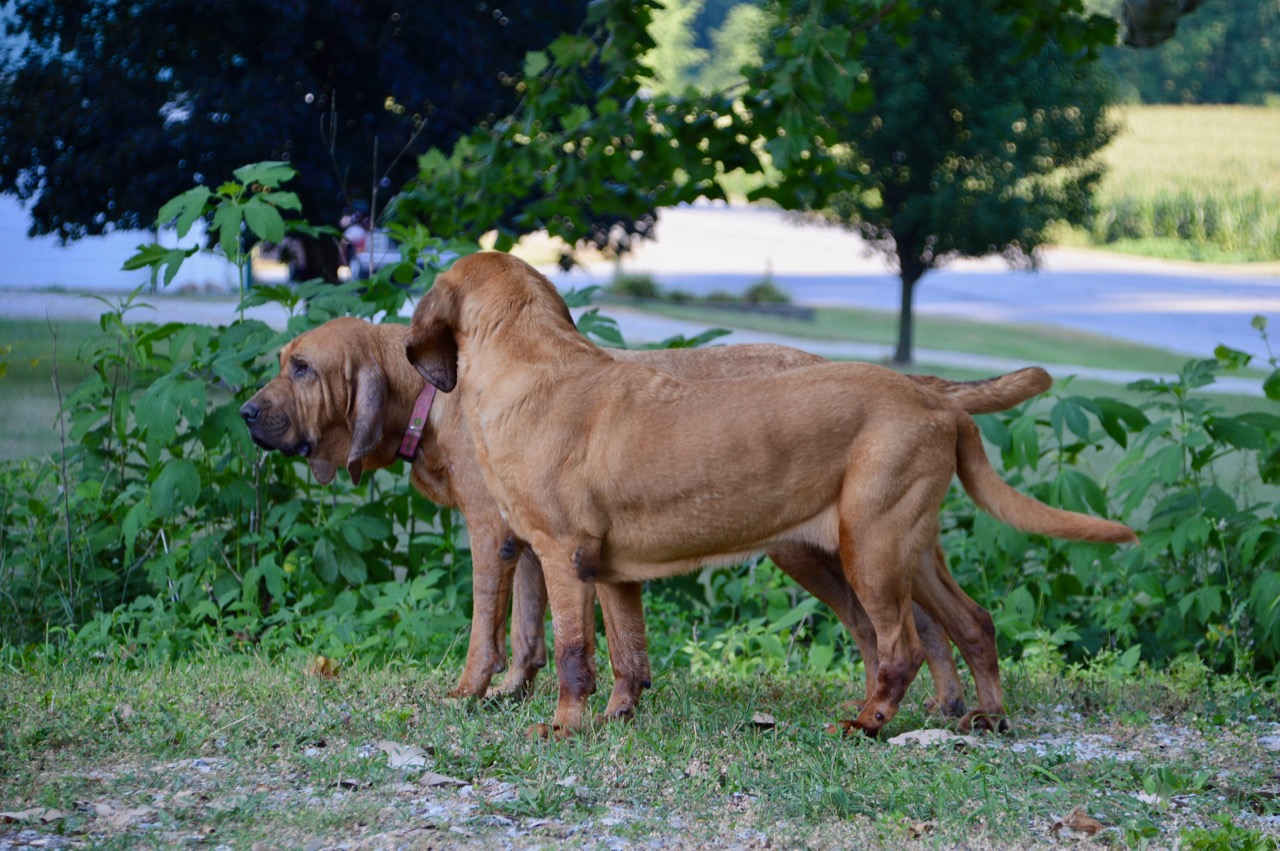 They look different sizes but they both weight 79 pounds today when they were at the vet. 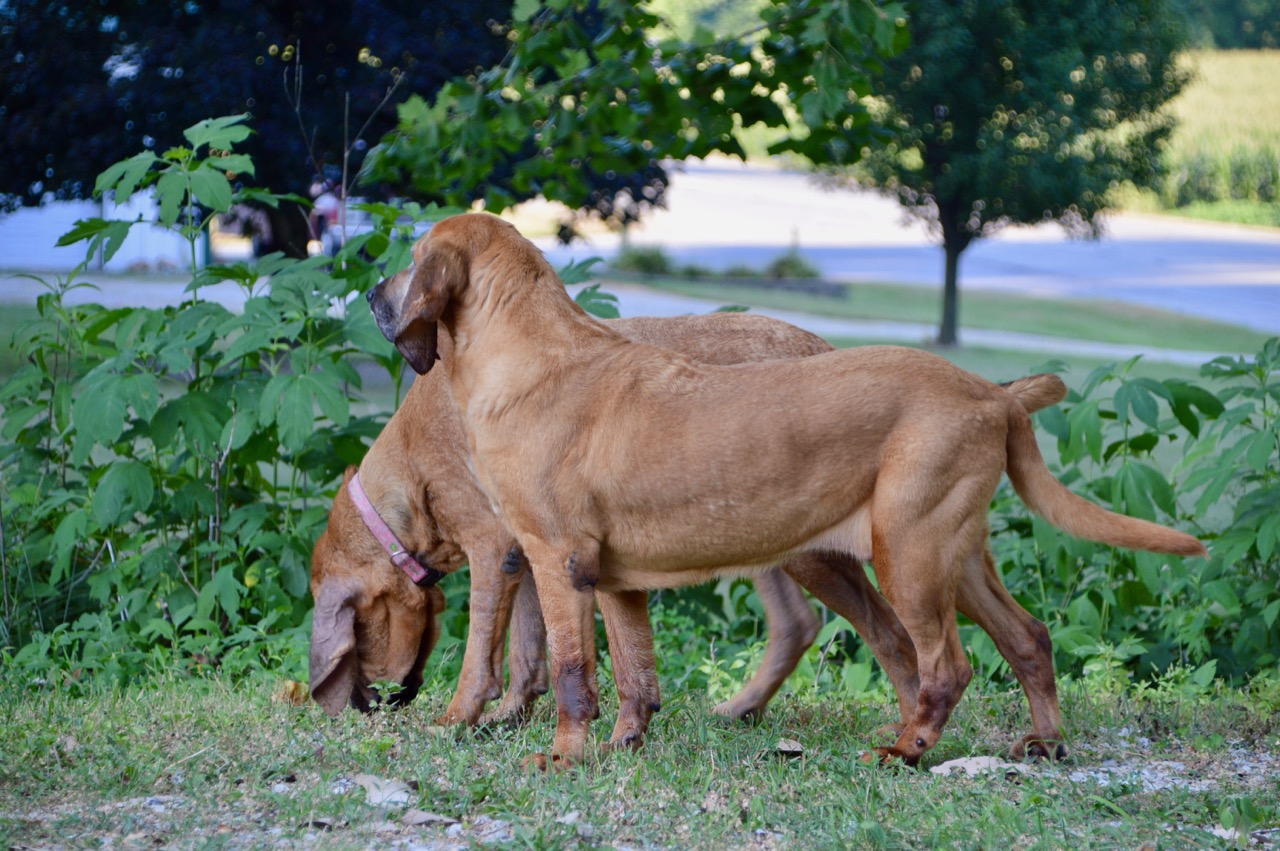 The vet wants me to keep an eye out on the fatty tumor to see if it gets bigger. If it does I'll bring her back in and she said she can take a sample by needle to test it. I am not an expert nor a vet but I was thinking that is what she would do today. Soon after getting back home I decided I was going to get a second opinion. 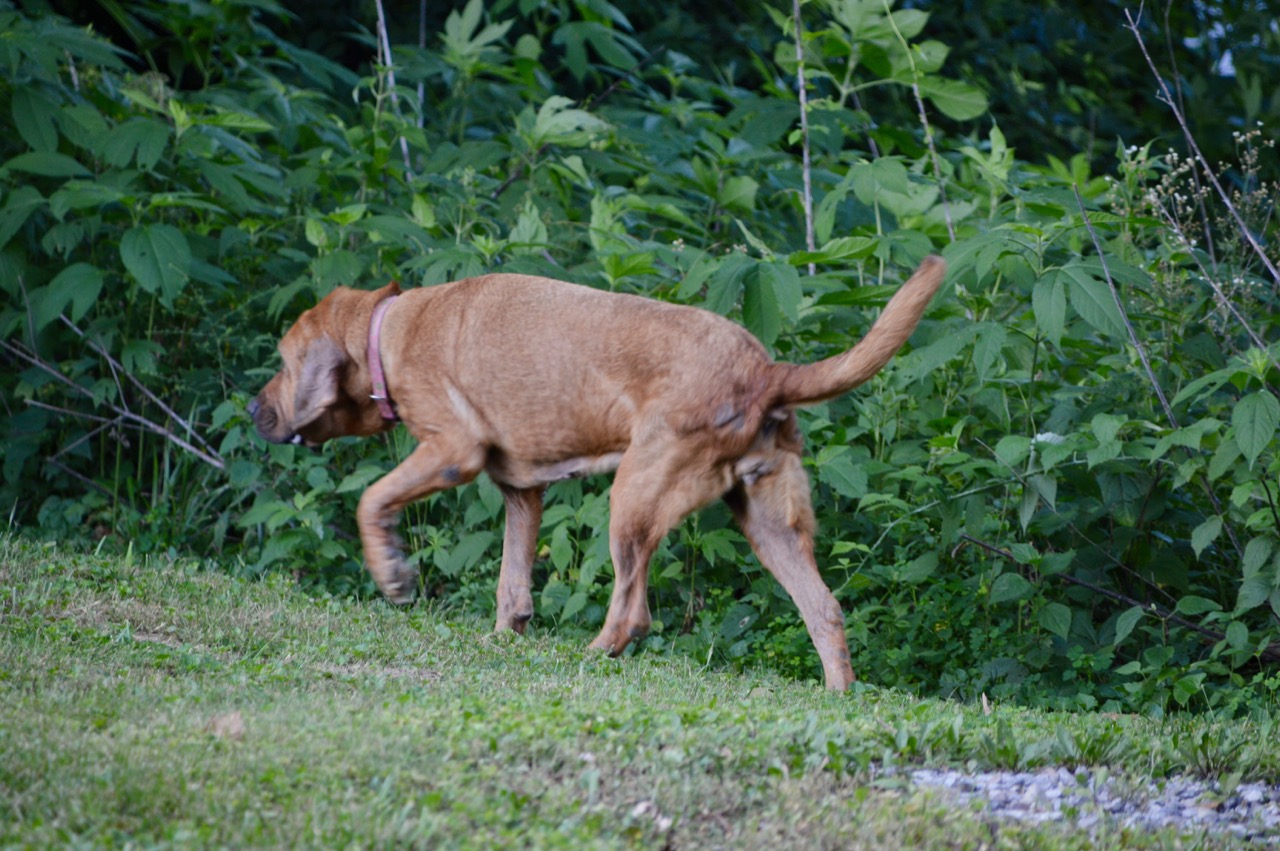 The loss of hair on Stella's ears is from allergies. Last year it was something else and not her hair loss. Looking at her vet record today she was down to 65 pounds in April 2017 when i took her in for loss of weight. She has gained all of her weight back.

Obviously by the way the hounds acted, a rabbit, or a cat had been walking along the wild ragweed and over to the burn pile recently. 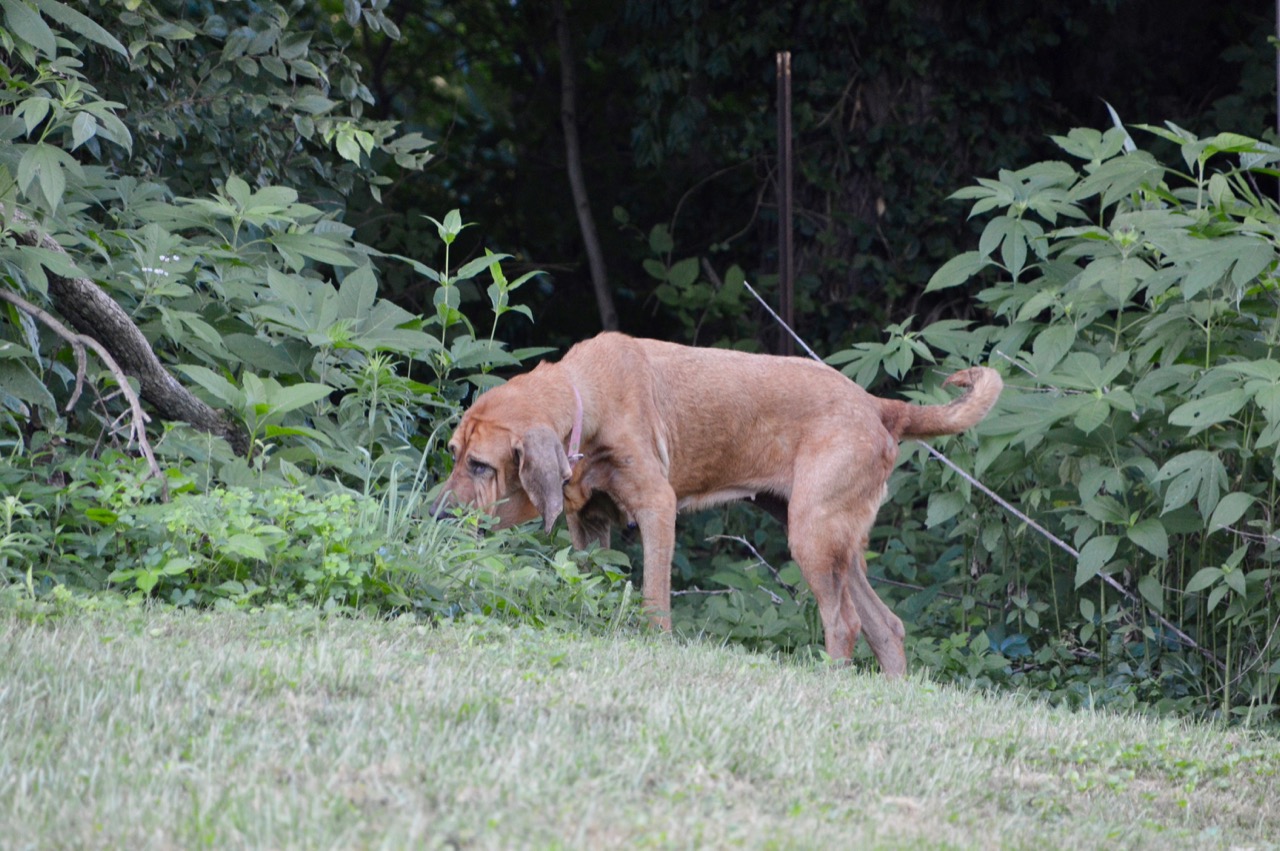 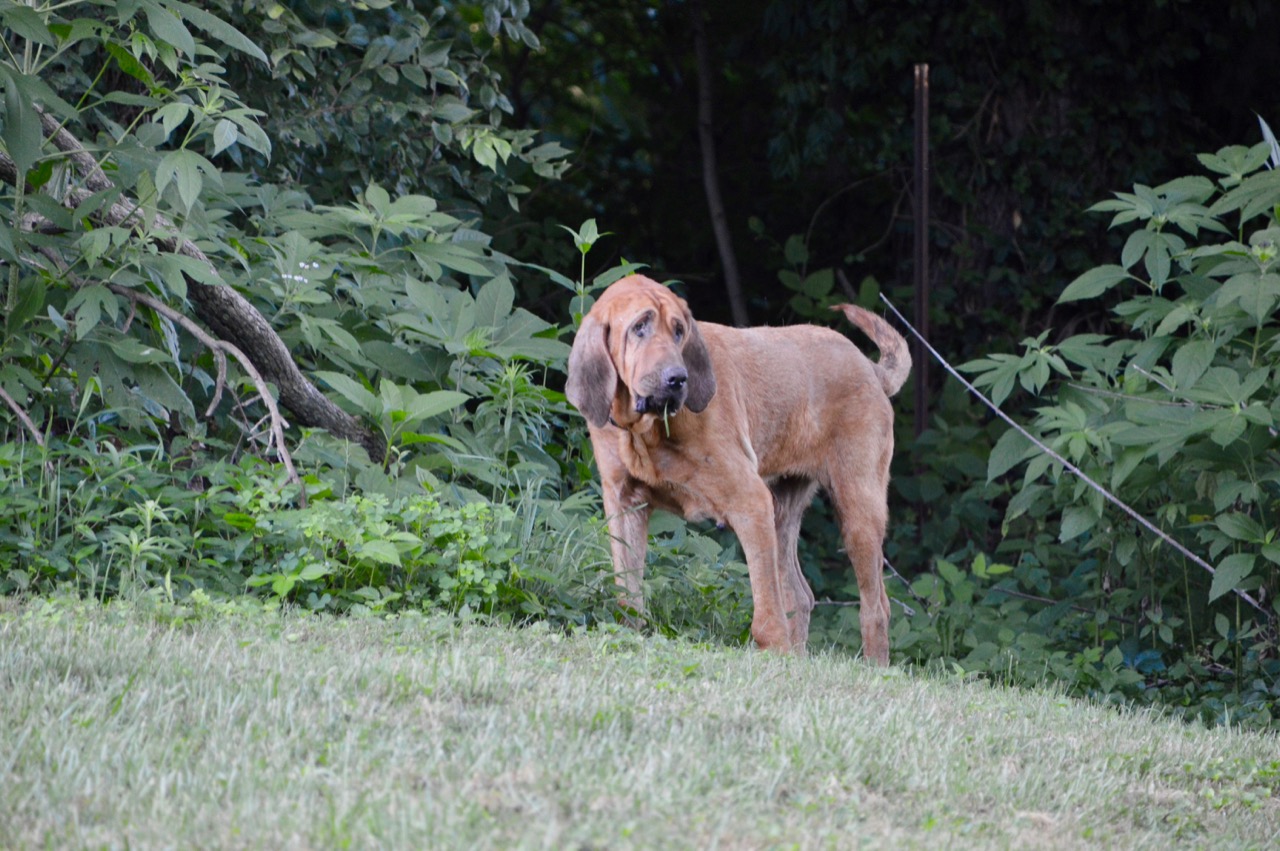 Nothing like having a little wet early morning grass. 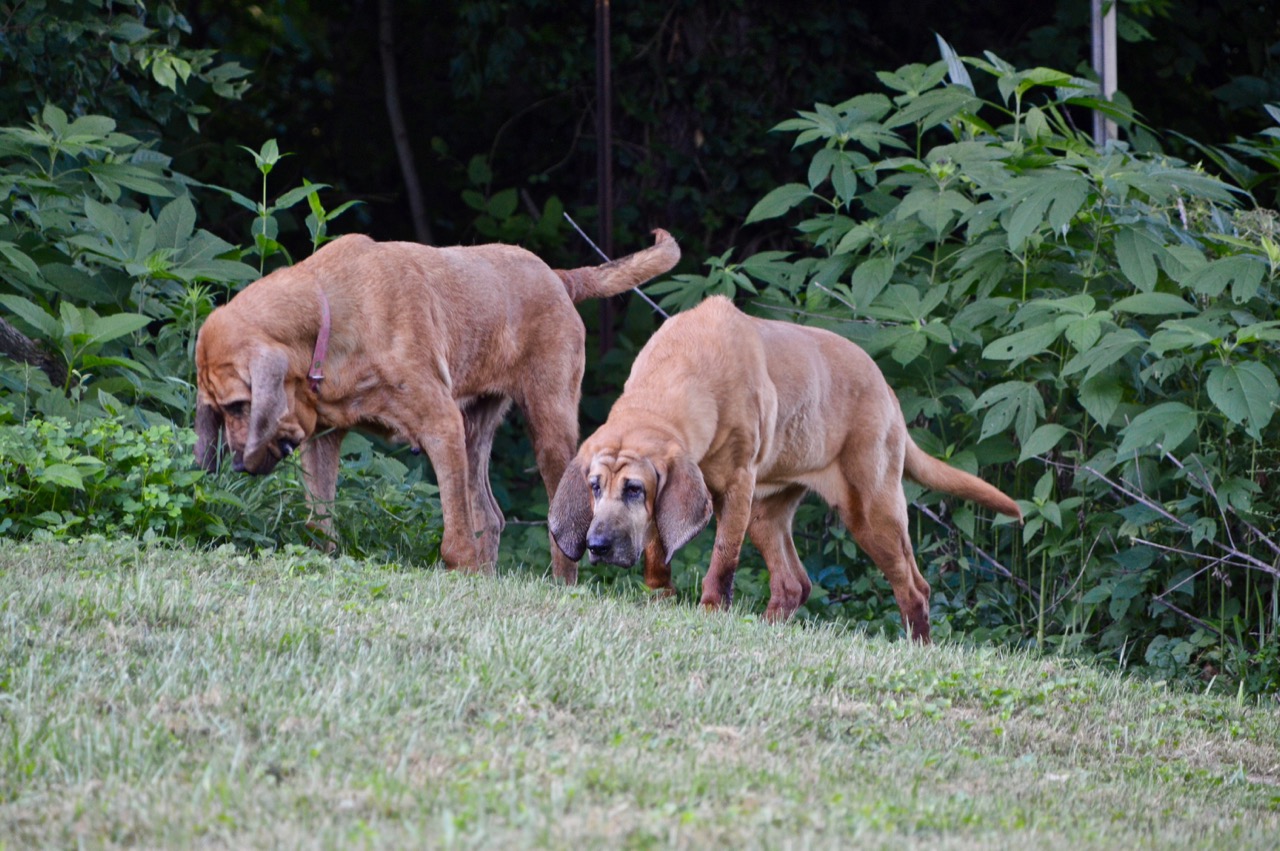 While Stella ate grass ... Sadie was trying to figure out who had been in her yard. 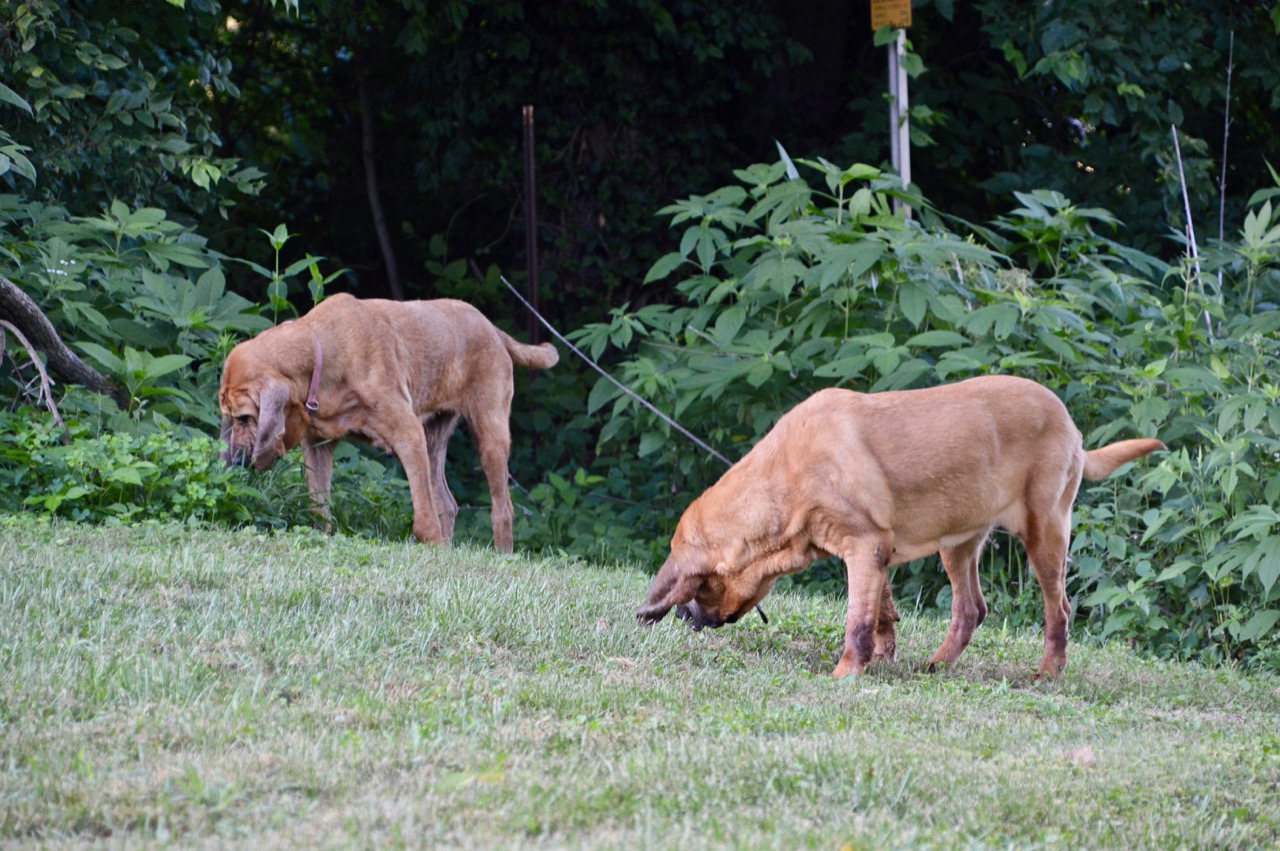 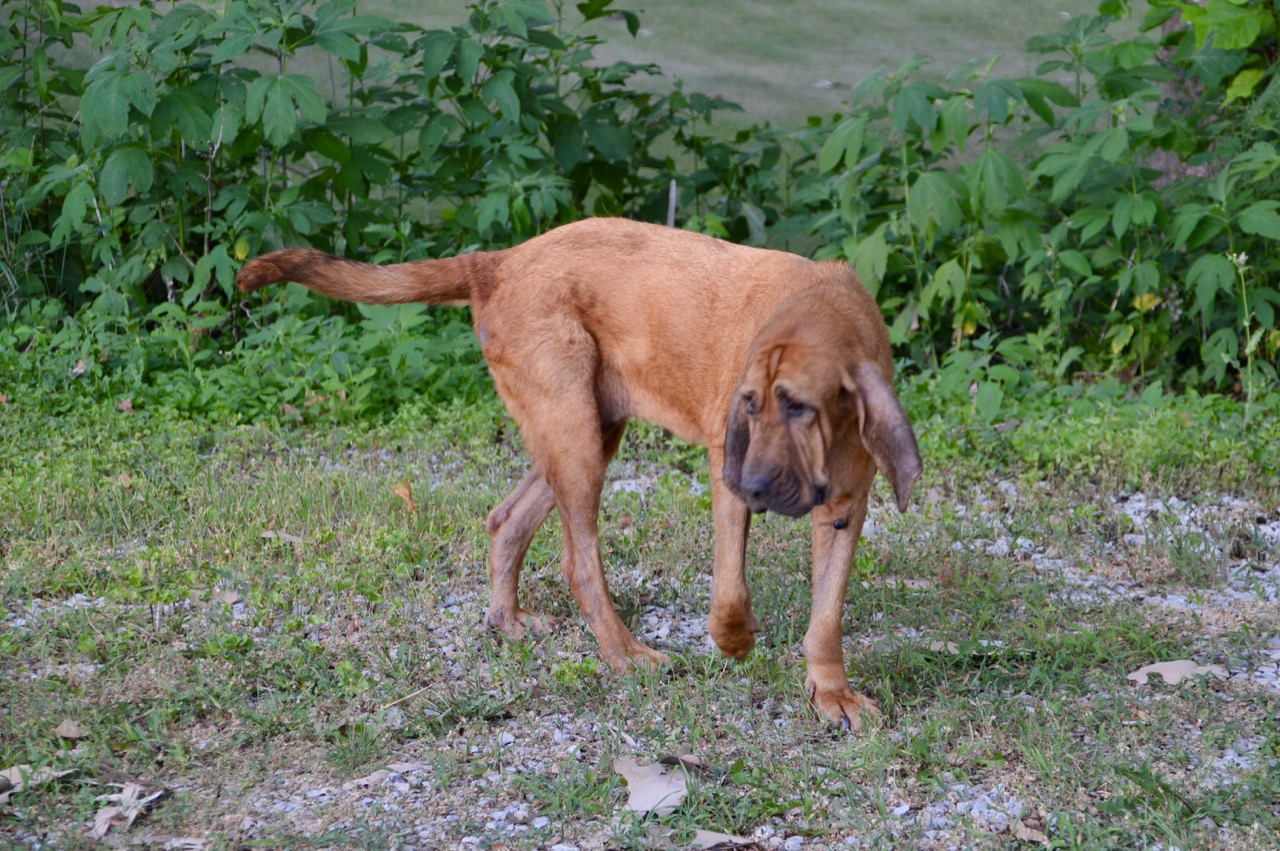 Finally the morning excitement was over and Stella decided it was time to come back inside, grab a leash and head for the vet. 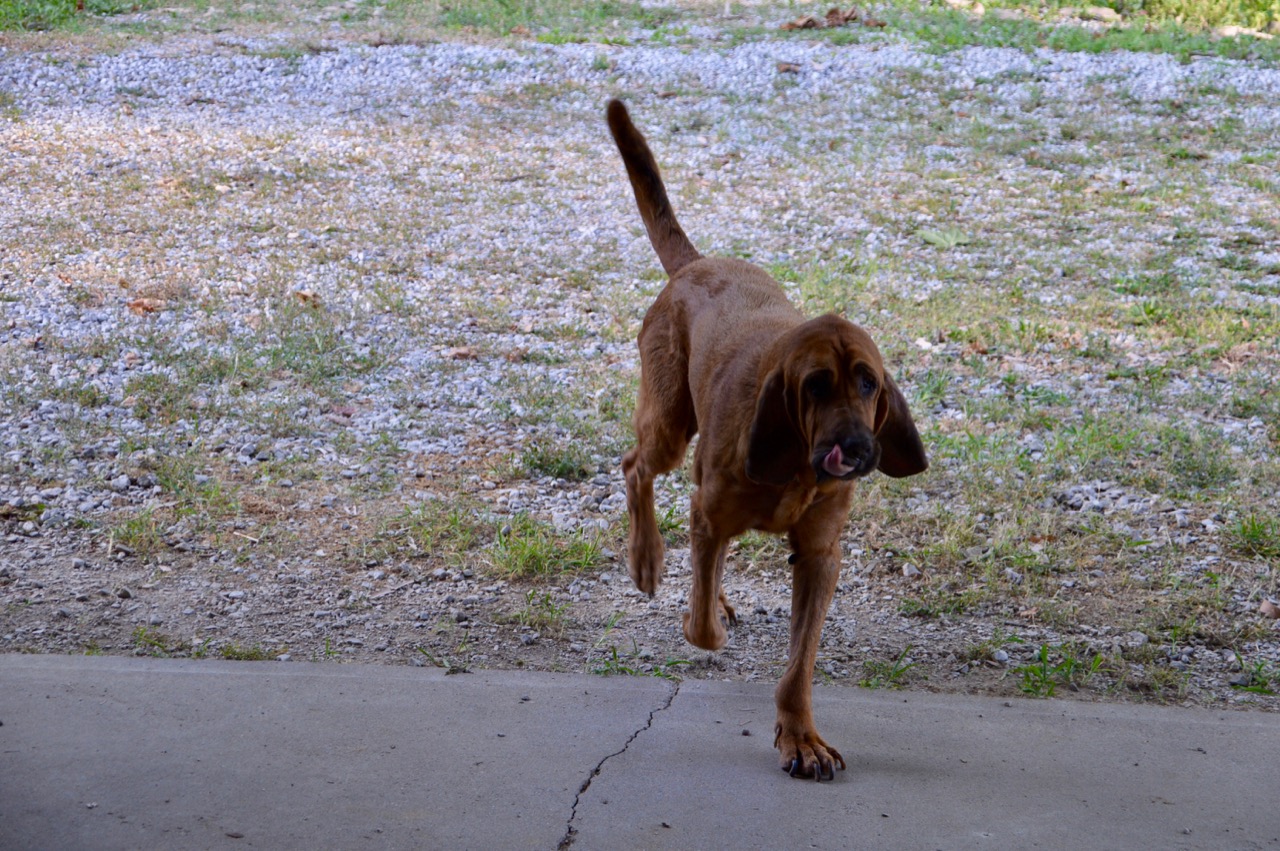 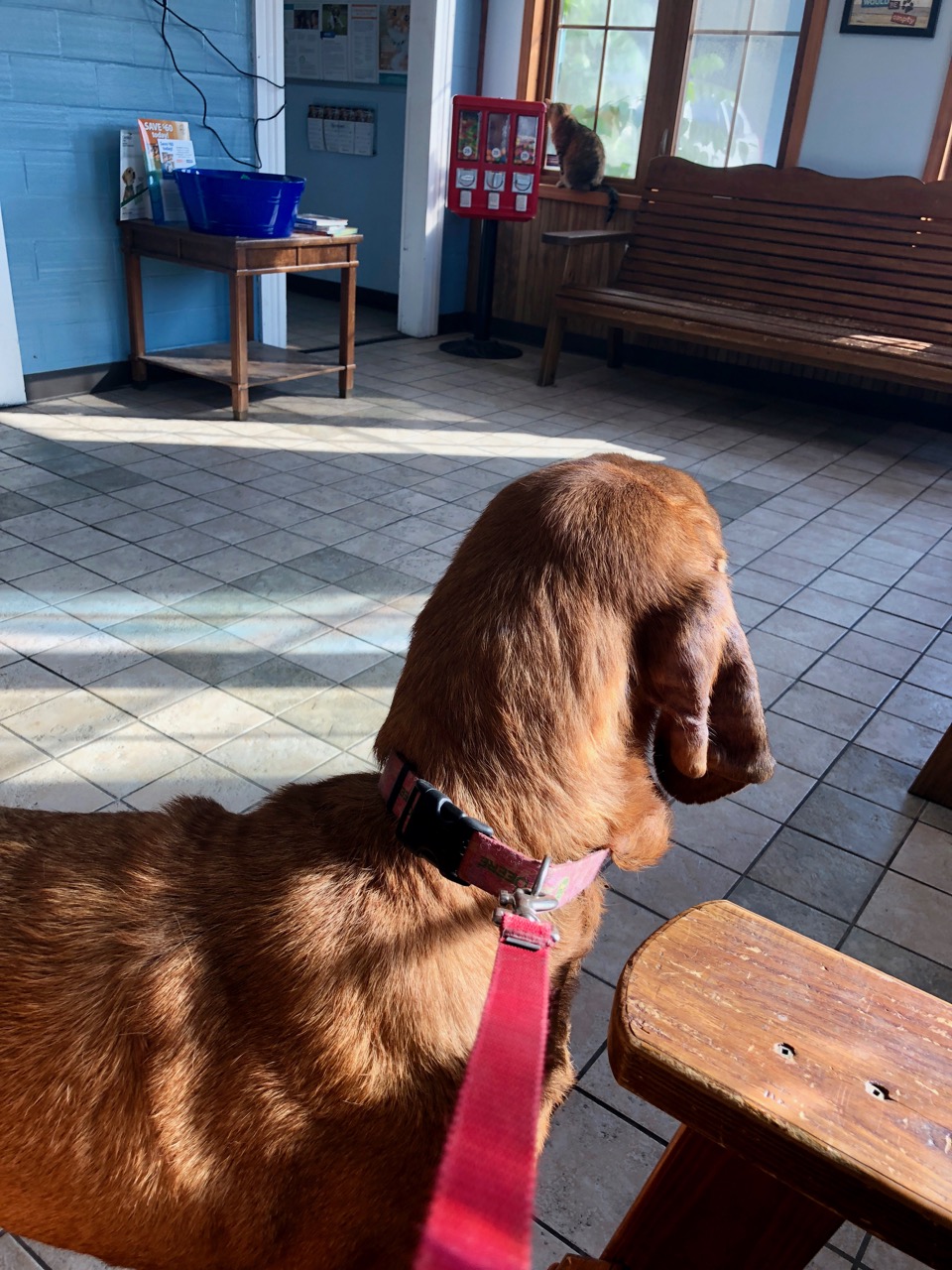 Stella saw the cat over in the window sill but didn't bark, howl nor whine ... she didn't try to get away to go take a look either ... she just sat there looking at the cat. 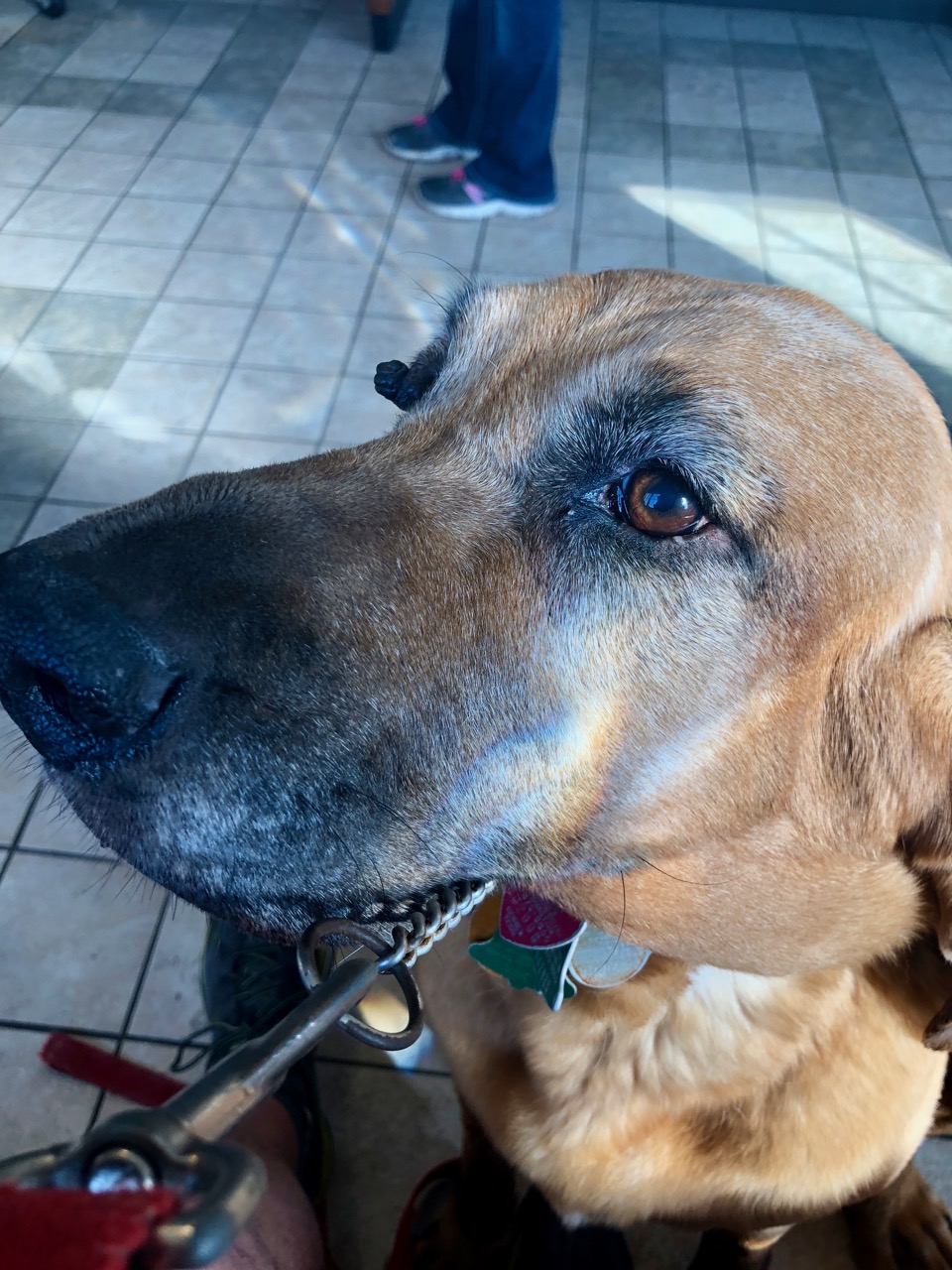 Sadie sat next to me wondering what was going on since she only goes to the vet once per year. The vet said that growth on her eyelid was normal for an older dog and was not contagious when I asked. Stella just started to get on one her eyelid also. I have seen more of those growths on Sadie and Stella in the last two years than I had in the previous 29 years of having basset hounds and bloodhounds. 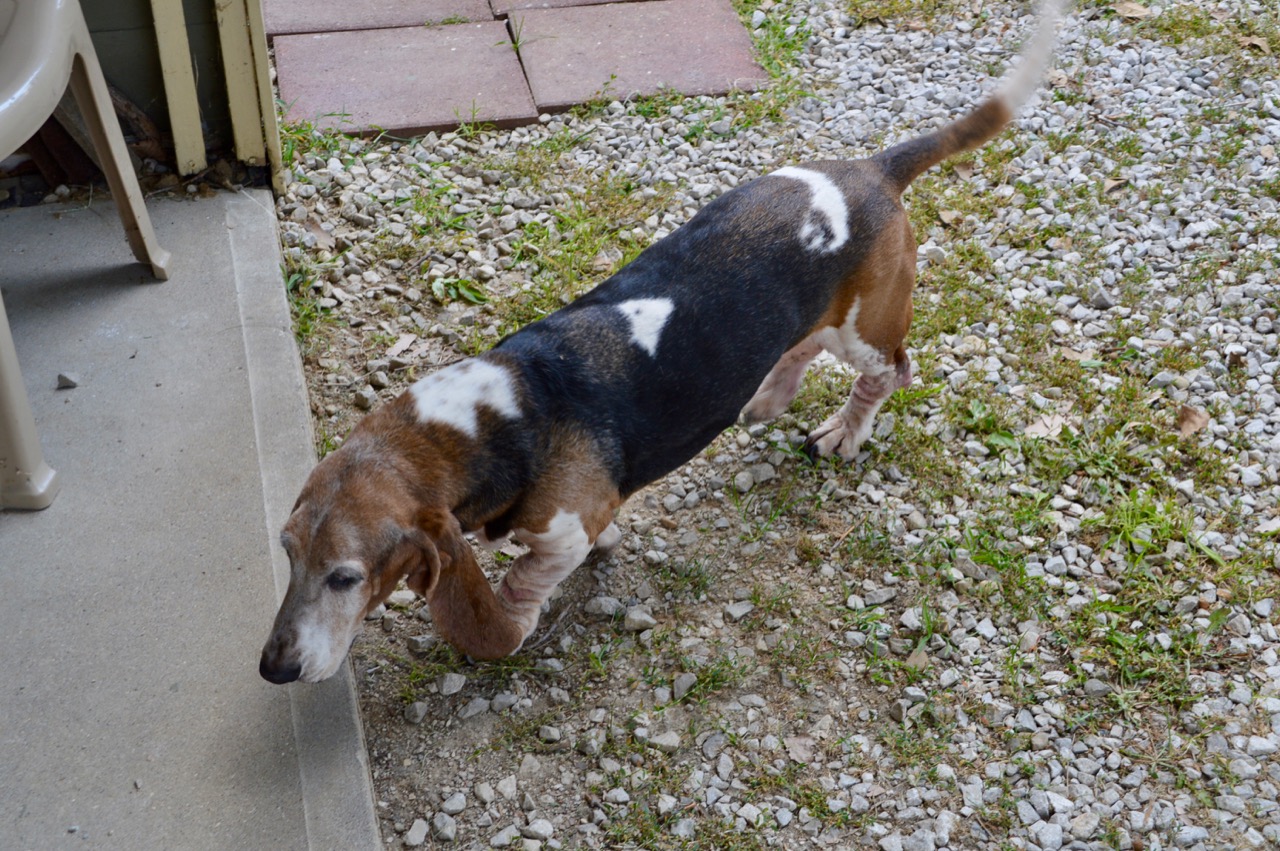 Heidi stayed home alone to guard the house. It was hard enough taking two bloodhounds to the vet at the same time instead of all three hounds. Sadie and Stella acted perfect and sat there watching people come and go in the waiting room and smelled a rabbit in a small carrier on their way out. They got their nails trimmed and didn't show any kind of resistance like they do with me trying to cut them. I also brushed a lot of hair our of Sadie and very little out of Stella when I got back home. Heidi barely sheds at all. 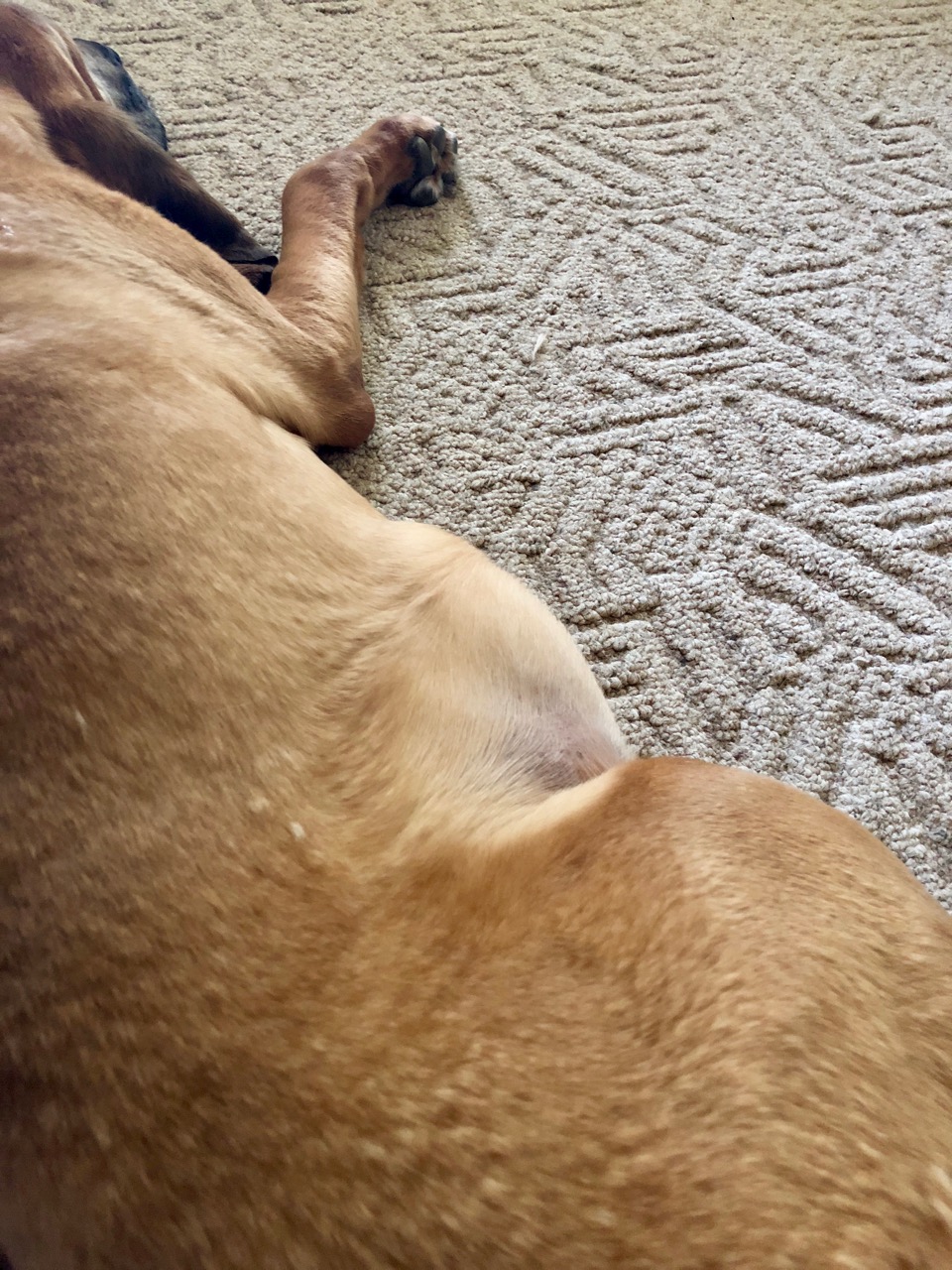 When she was laying down today I could get a good shot of the lump as I call it. I did some reading online and it's nothing to worry about but the articles did say today's exam was just "an educated guess" and even the test with the needle withdrawing some fluid gave false positives. Some recommended a biopsy to make sure it was malignant.

I'll keep a close eye on it.