Sadie Is Curious About All The Excitement 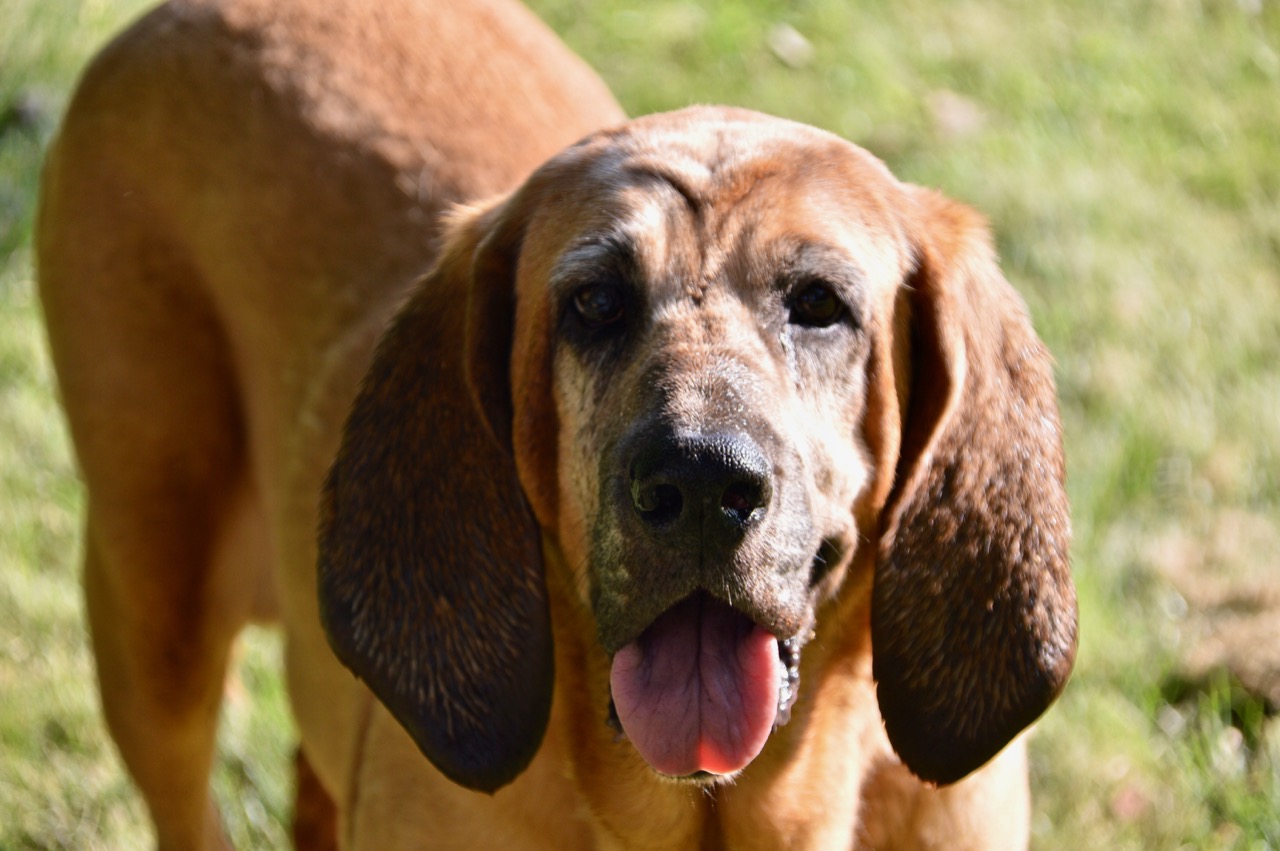 Sadie was wondering what all the excitement was about after the blog exploded with increased traffic, three different friends texting me nonstop last night to talk about 'the' lipoma. She couldn't figure out why I kept trying to get on the right side of her with the Nikon or iPhone camera in my hand. What was going on ?? After all she had ran on both of her walks yesterday, got a ride in the FJ and never missed one piece of kibble. 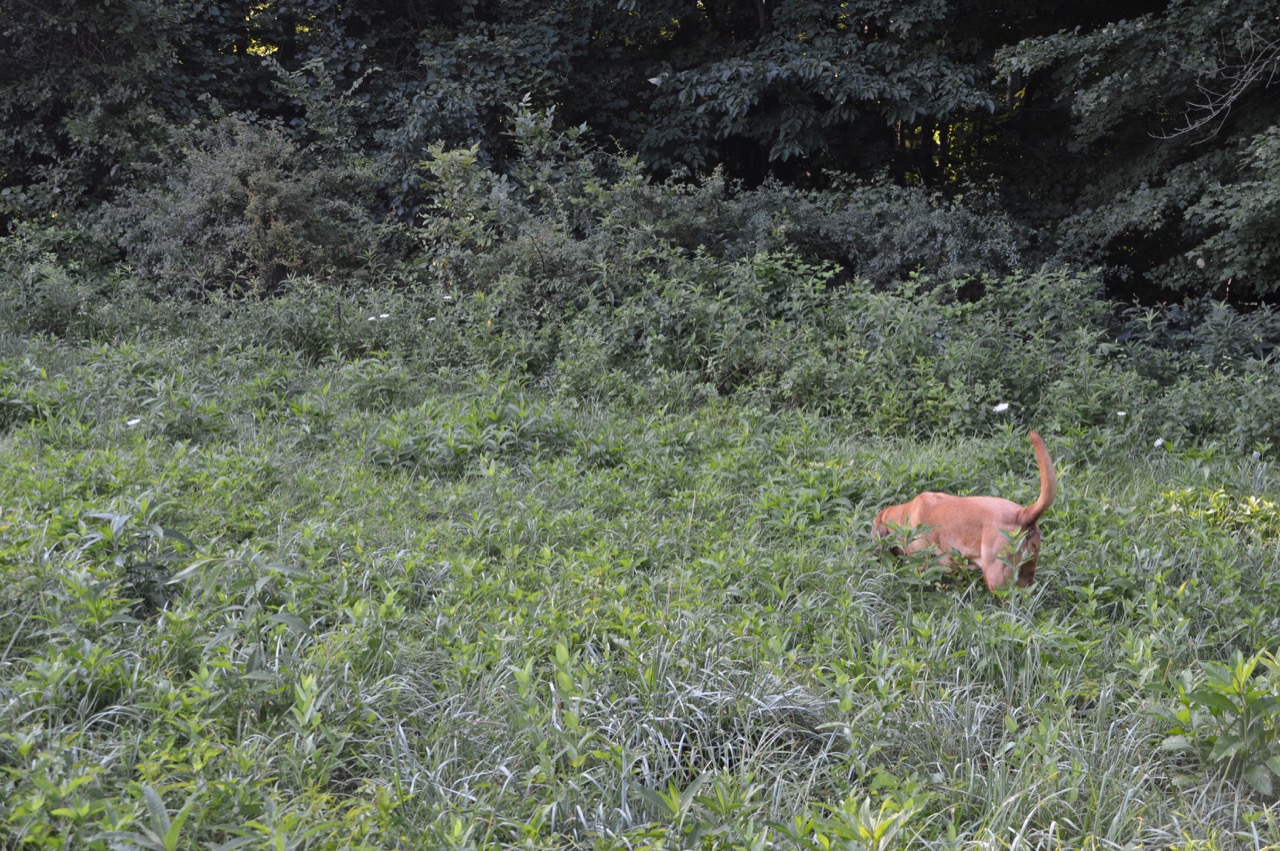 So as we stepped outside on a cool morning, just like all other mornings she nudged my hand with her wet nose and then took off sprinting into the field. I am amazed by the amount of weeds that have taken over the field since they cut it in early June. It was almost all grass before the cut and now it's hard to see any of it. 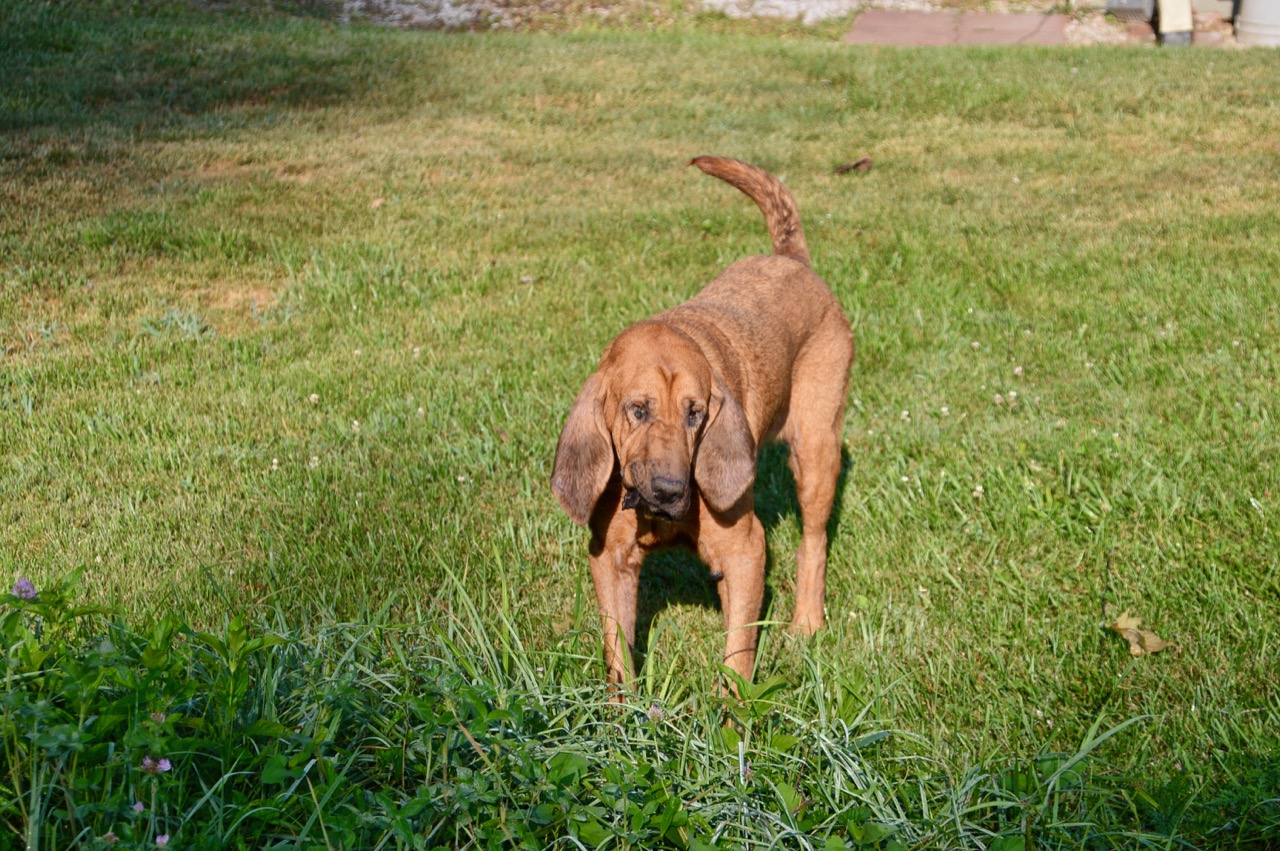 Stella finds it though, before she starts every walk at the edge of the yard/field. Nothing like some nice wet grass to eat before she starts her half mile wander. She had no plans to escape today as she trotted onto the path of worn weeds and followed me until I got out of her way. The added dropped the cool temperature of 68° a few more. It felt really nice compared to inside the house, which was very warm as it retained the heat from yesterday. I turned off the AC and opened the windows about the time I turned off the lights for the night. Hard to resist low 60's and low humidity. 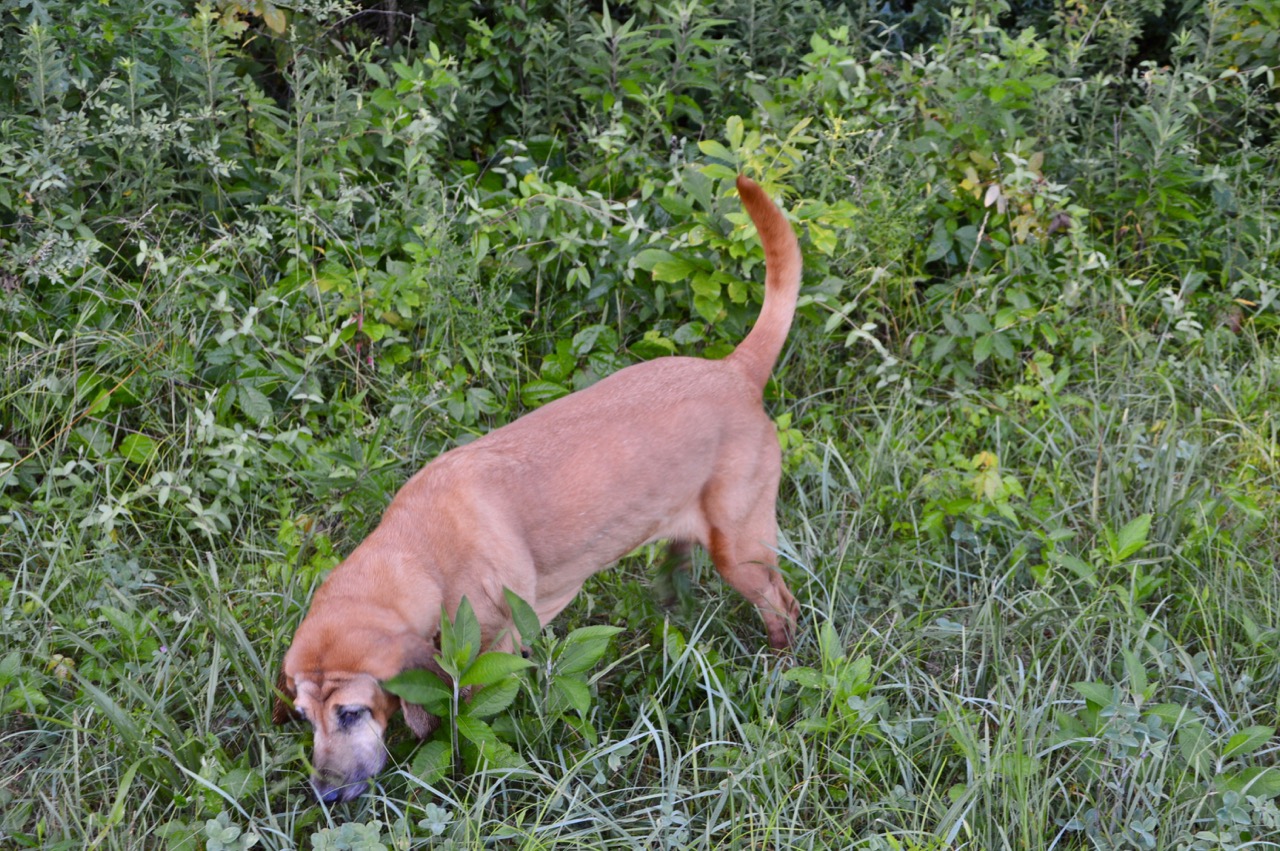 A lot of scent to track this morning. There were some deer scat added to their searching results at times but not a lot. Even Stella thought a couple of times she had found a track that lead into the thick brush along the woods. 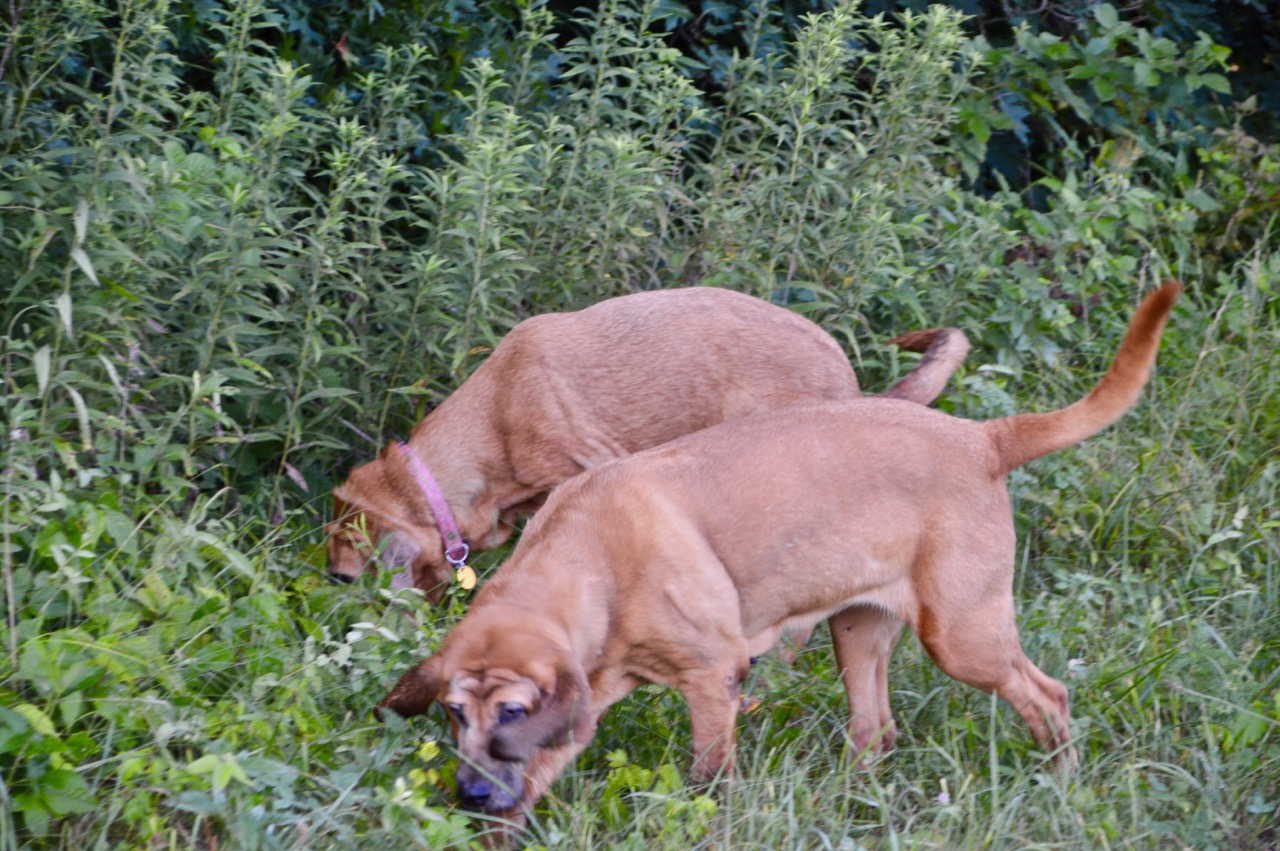 As I looked at them walking together I still had a hard time understanding that both of them weight the same yesterday. I even let each hound sit on the scale long enough for the digital scale to stop on a number ... then a few more minutes in case it wanted to be more accurate. Each time, 79 pounds. 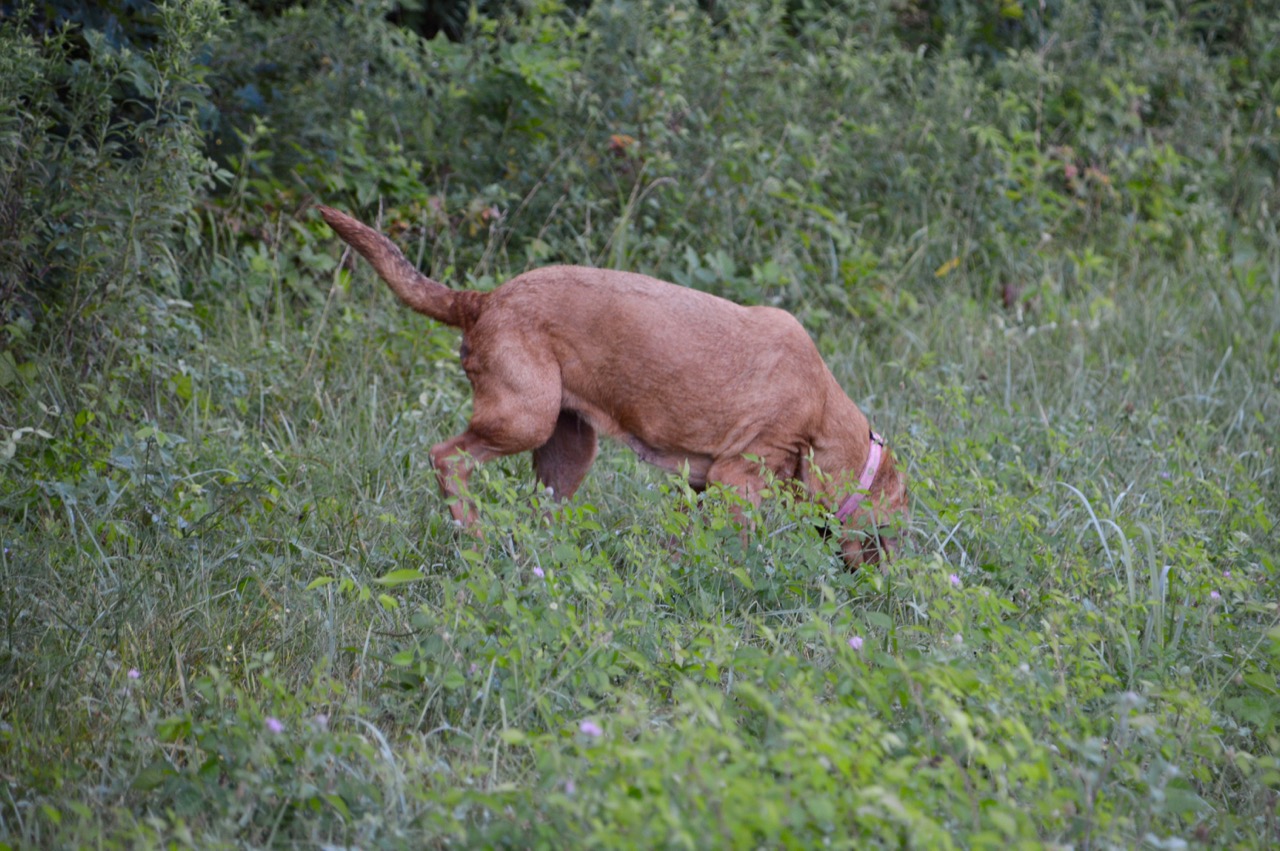 The more I thought of our vet visit, an office I have been going to for 17-18 years, the more I realized that things had changed over time and I will moving to the vet in town. She is the same vet I took Heidi to almost four years ago with skin allergies. I remember the responses I got as Heidi walked into the office. I remember how well the vet explained everything during her inspection where I had to ask very few questions.

Yesterday afternoon the decision was final when I realized I had missed them not taking a blood sample of each bloodhound to check for heartworm. It was not on my invoice either so I called the receptionist who I have known for those 17-18 years. 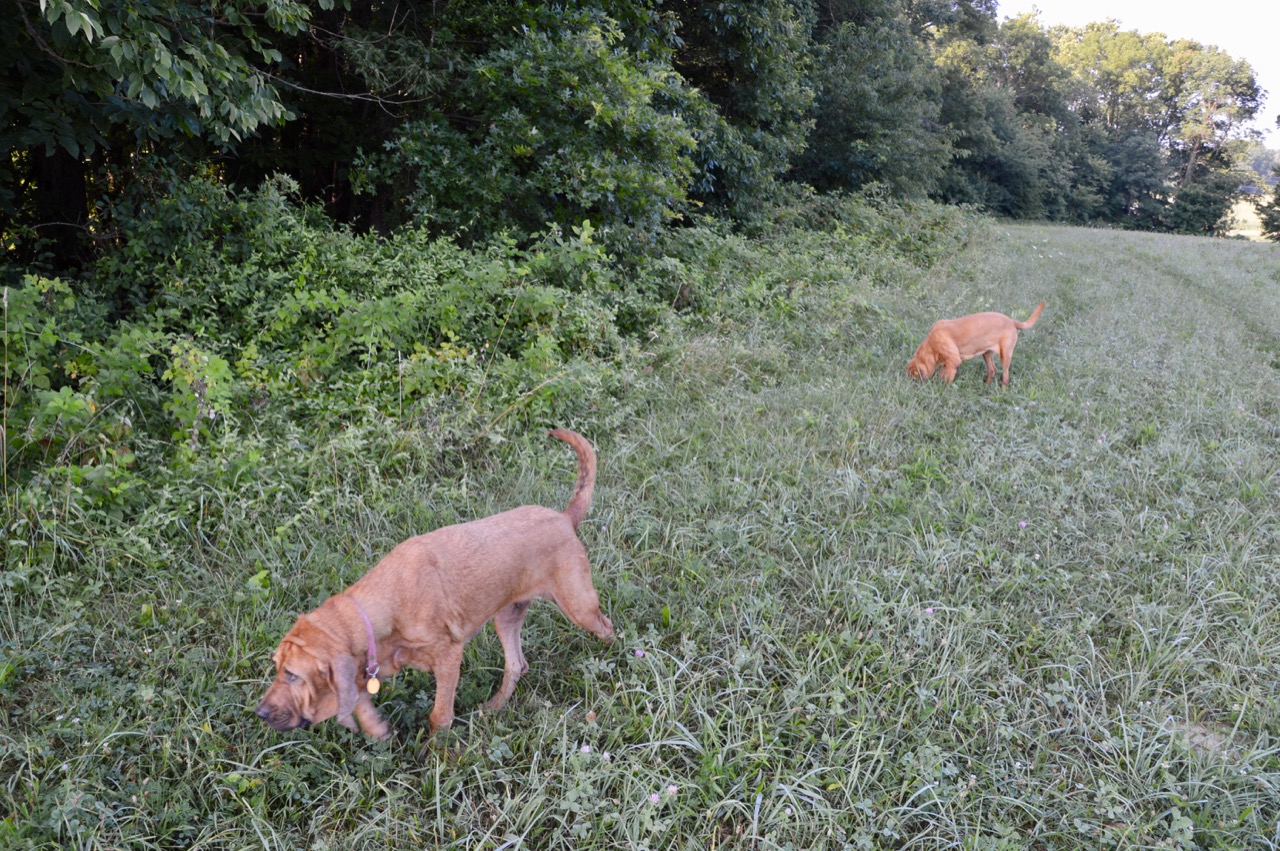 When I asked I found out that the heartworm test was no longer part of the annual exam "Unless you ask for it" ... I remained calm with my pulse shooting through my Garmin Smart watch and my mouth wanting to rip into that answer. As I hung up the phone I knew that was it ... I was never going back to that place. 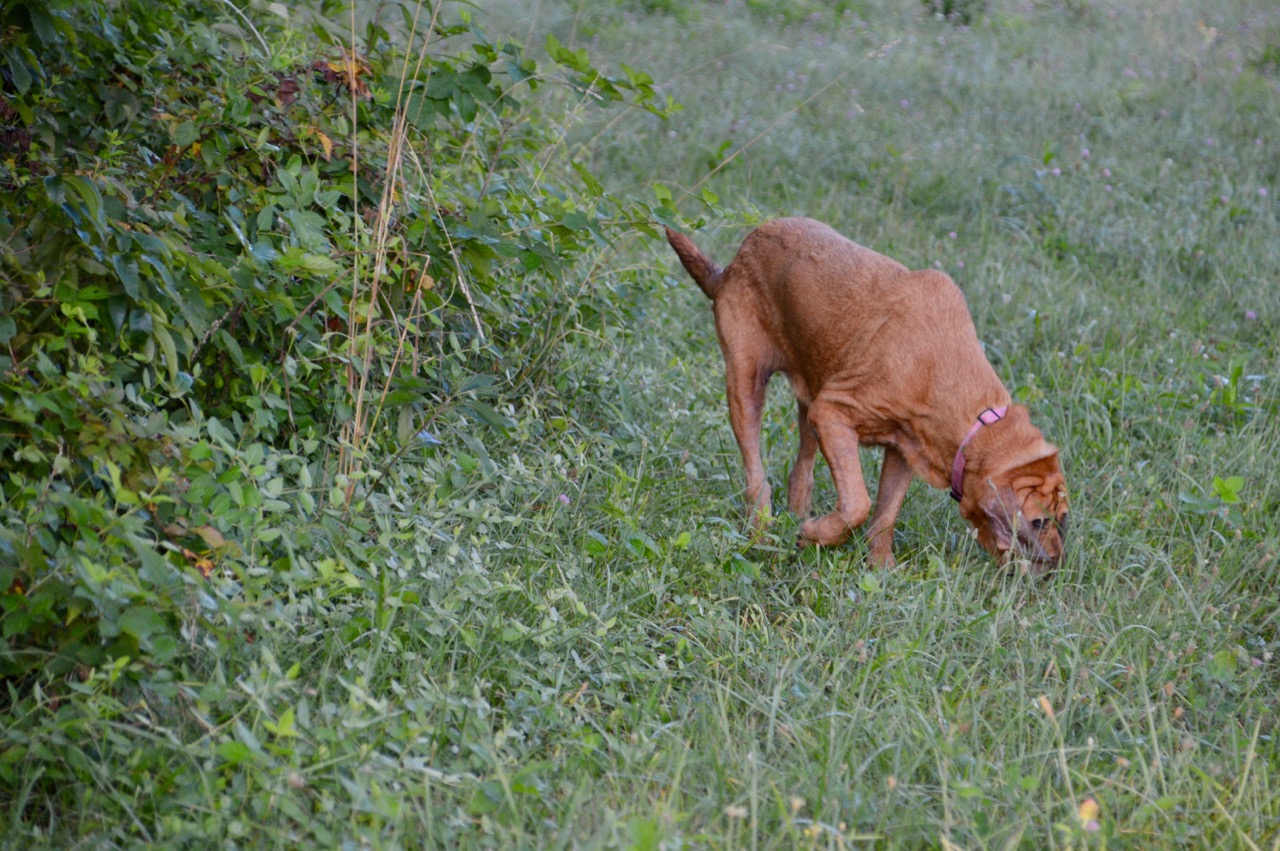 In the land of hot humid summers with fleas and mosquitoes ... and you don't even do a heartworm test unless asked to do ... my bullshit flag is flying high today. 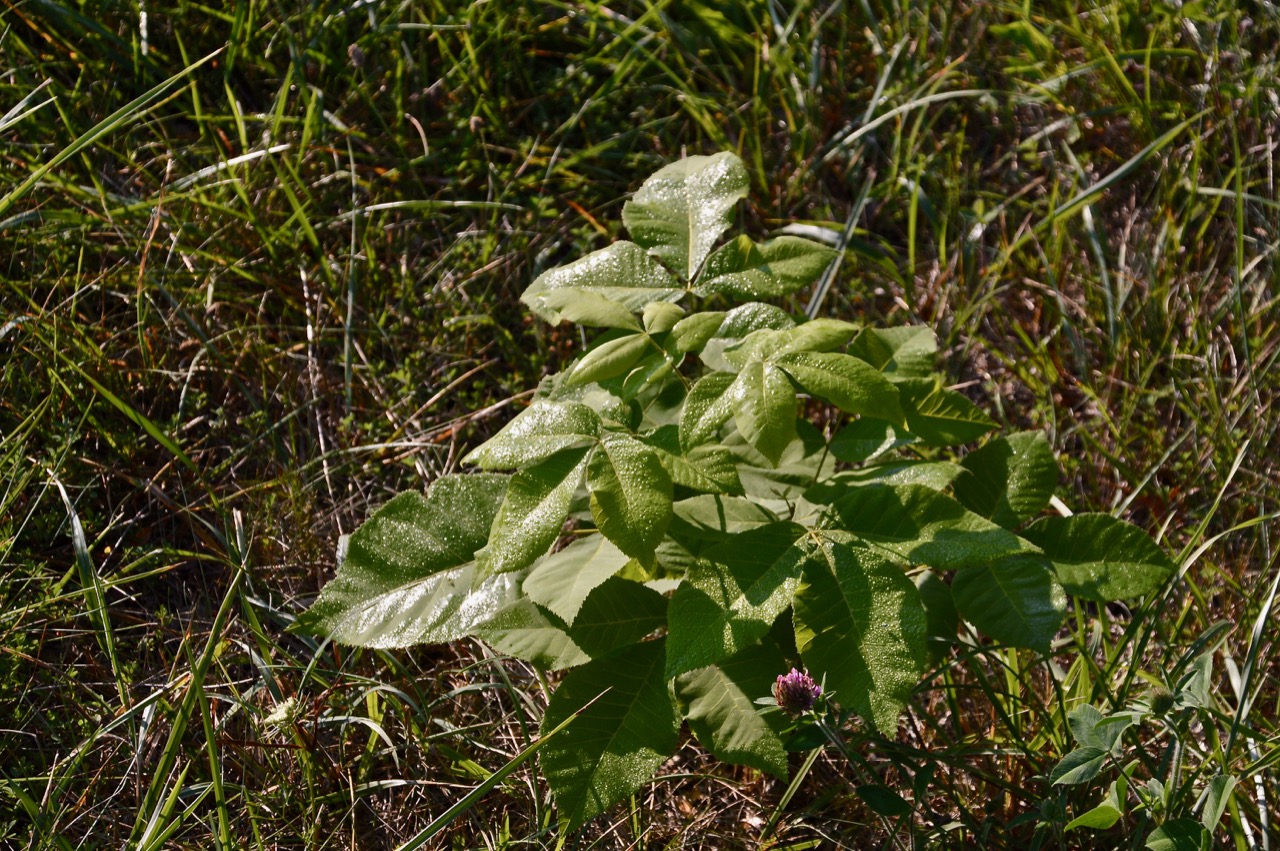 You would think with all of the condensation you see on that plant/weed that it has to be humid and sticky early in the morning ... but humidity is sitting at 63%, high for some, low for me. 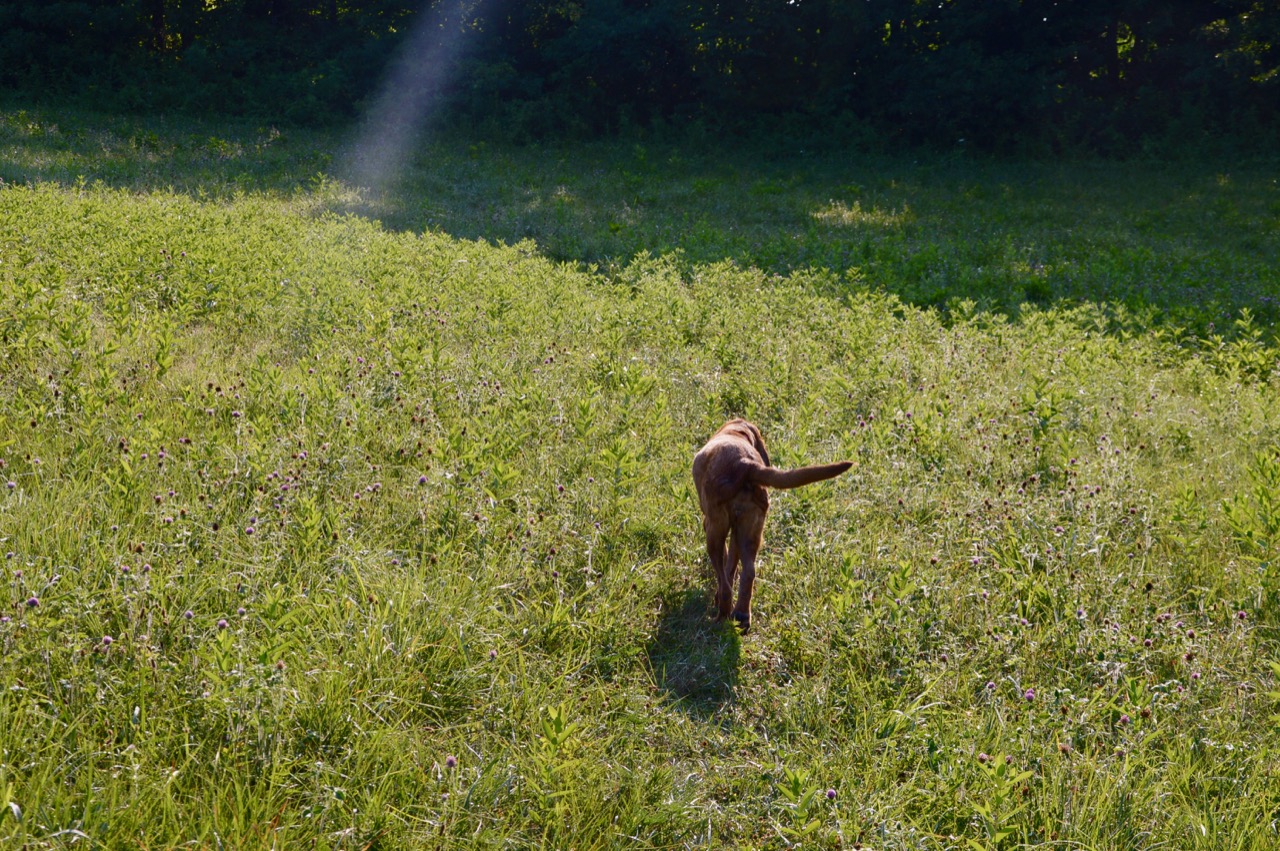 A mysterious light leads Stella down the path. A little news on Stella's lack of running or trotting in the past year. I have not seen her full out run in the field for so long I can't remember the last time she did. This morning with the morning breakfast kibble waiting for them in their own stainless steel bowls, I walked to the door to let the three hounds inside.

Unlike every morning, only Sadie and Heidi were waiting to run inside. Stella who is usually first, was not around ... until I was about to close the screen door. She was sprinting as fast as she could, trying to make the turn around the FJ and make it before I close the door ... sprinting is the key word there ... for food. 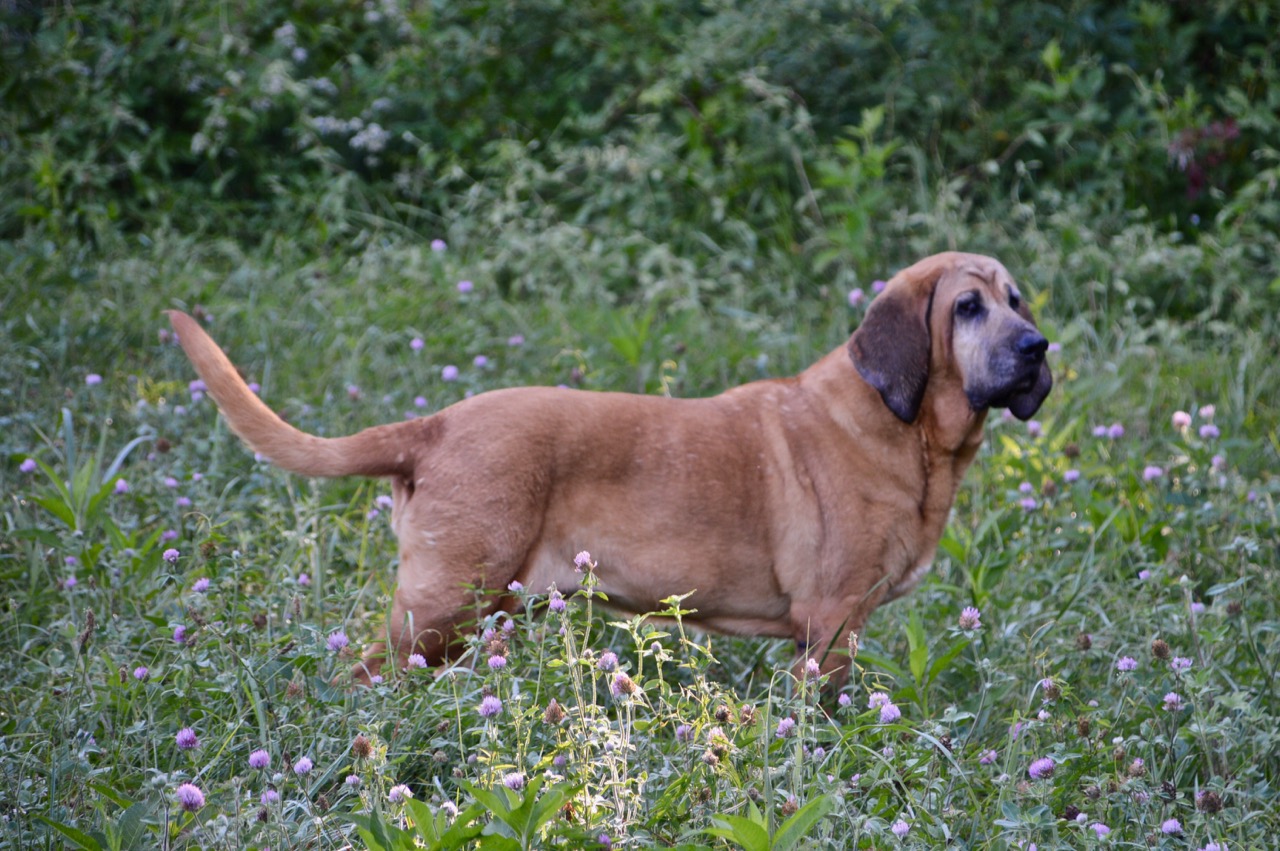 Today's photo of the fatty tumor I am keeping an eye on ... dead center. I am making an appointment with my 'new' vet in town. I had a couple of comments last night on the blog relating their experiences when their dogs had the same thing. Like what I read on the website searches I did ... surgery is needed only when it makes the dog uncomfortable to sit or lie down. Another said her vet sucked out the fat with a needle inserted, the FIRST time she was at the vet.

I always read the comments and try to reply to all of them too. 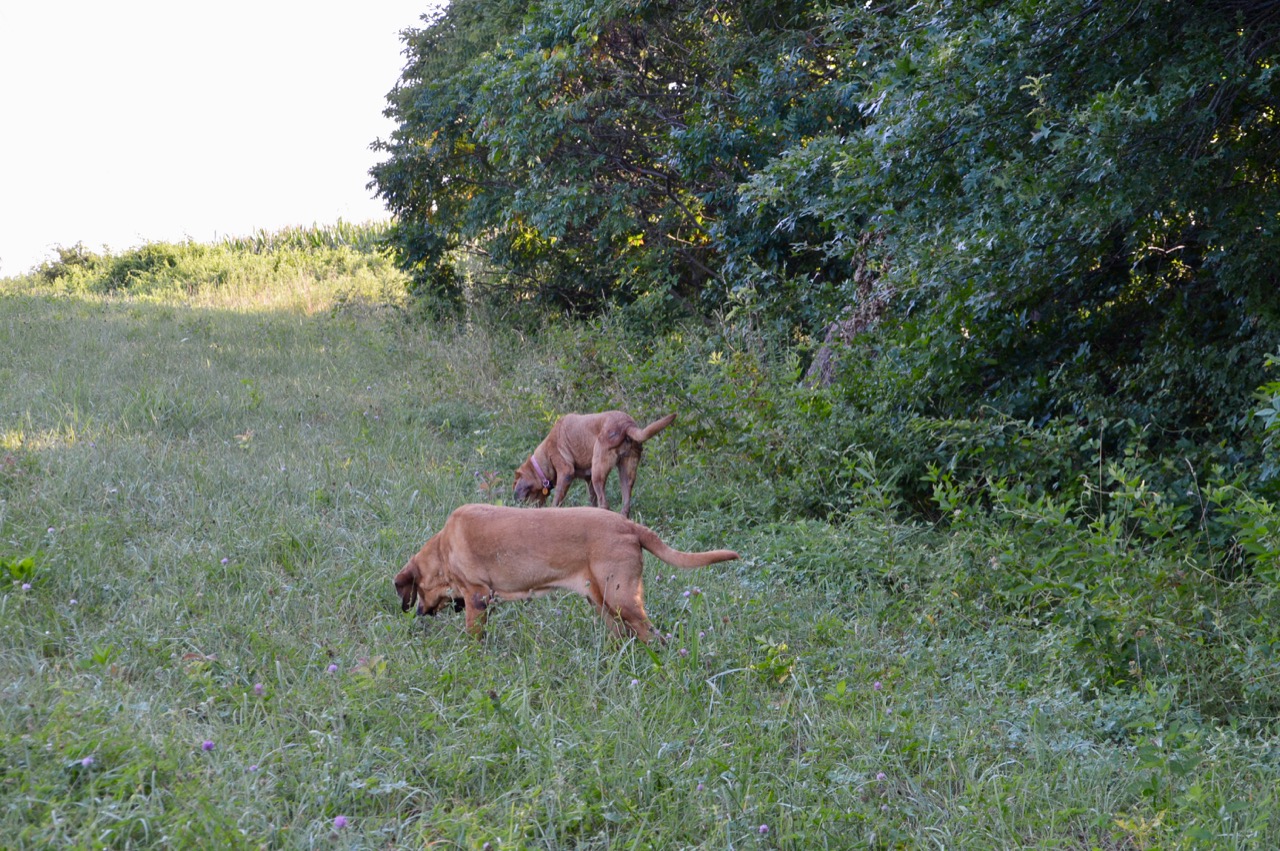 It was a long slow process completing this walk this morning. I let the hounds do their own thing at their pace. Once I wasn't sure we would ever leave the back of the field.  LOL 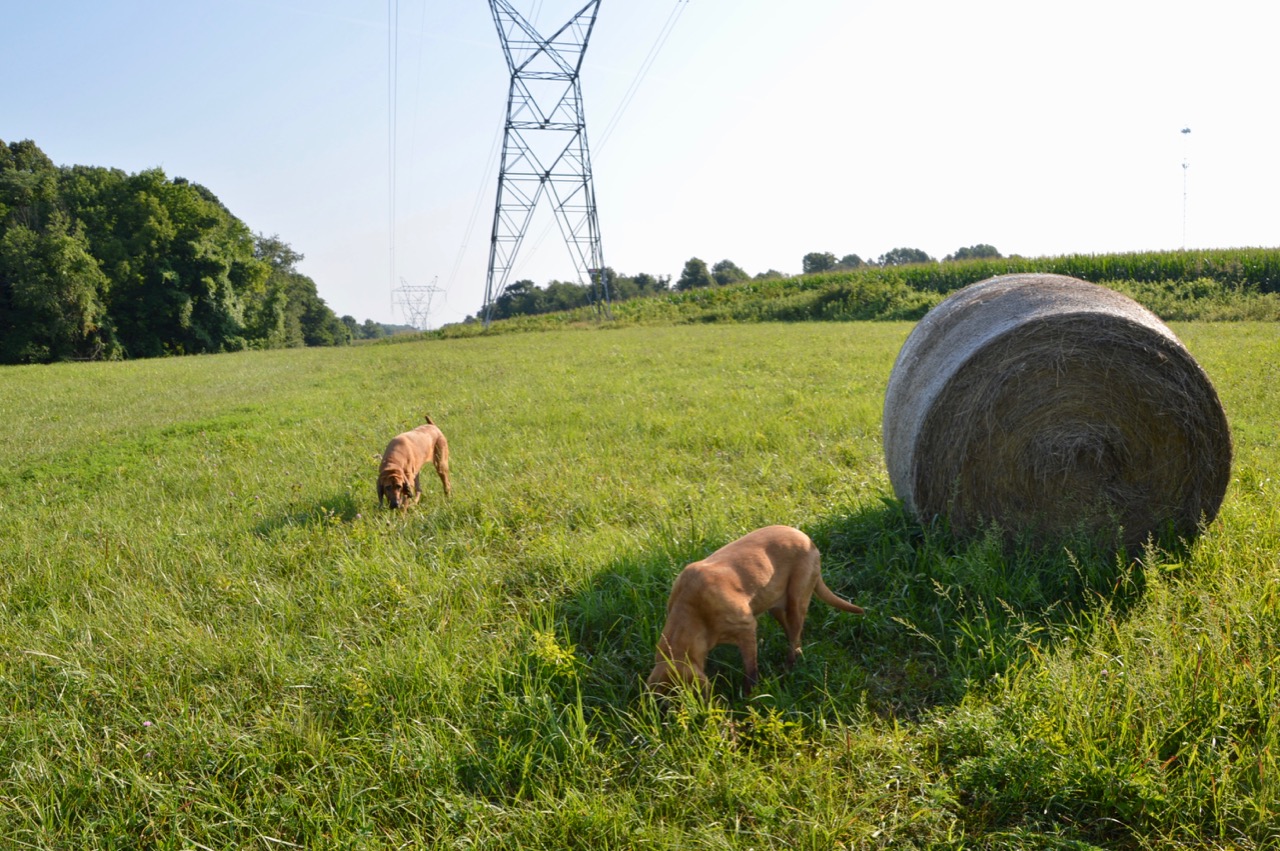 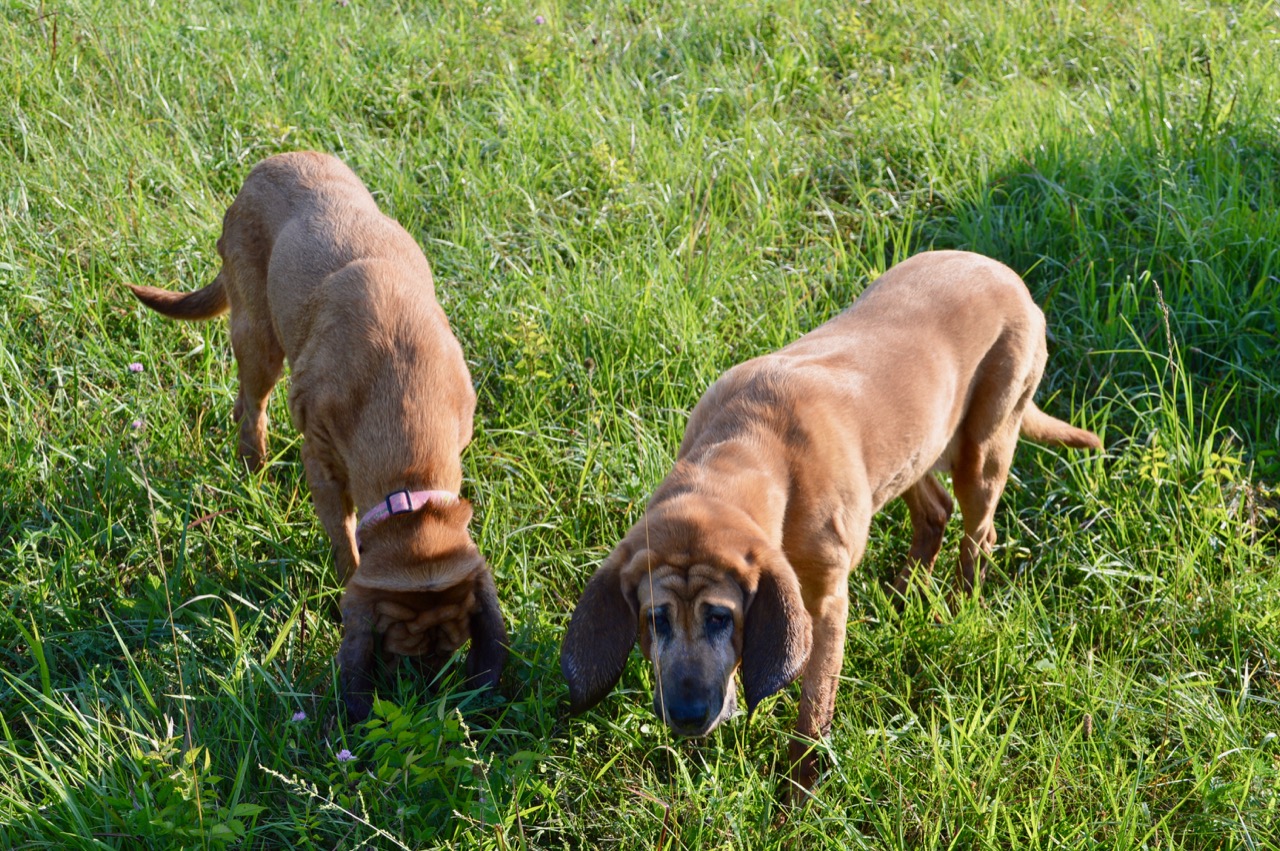 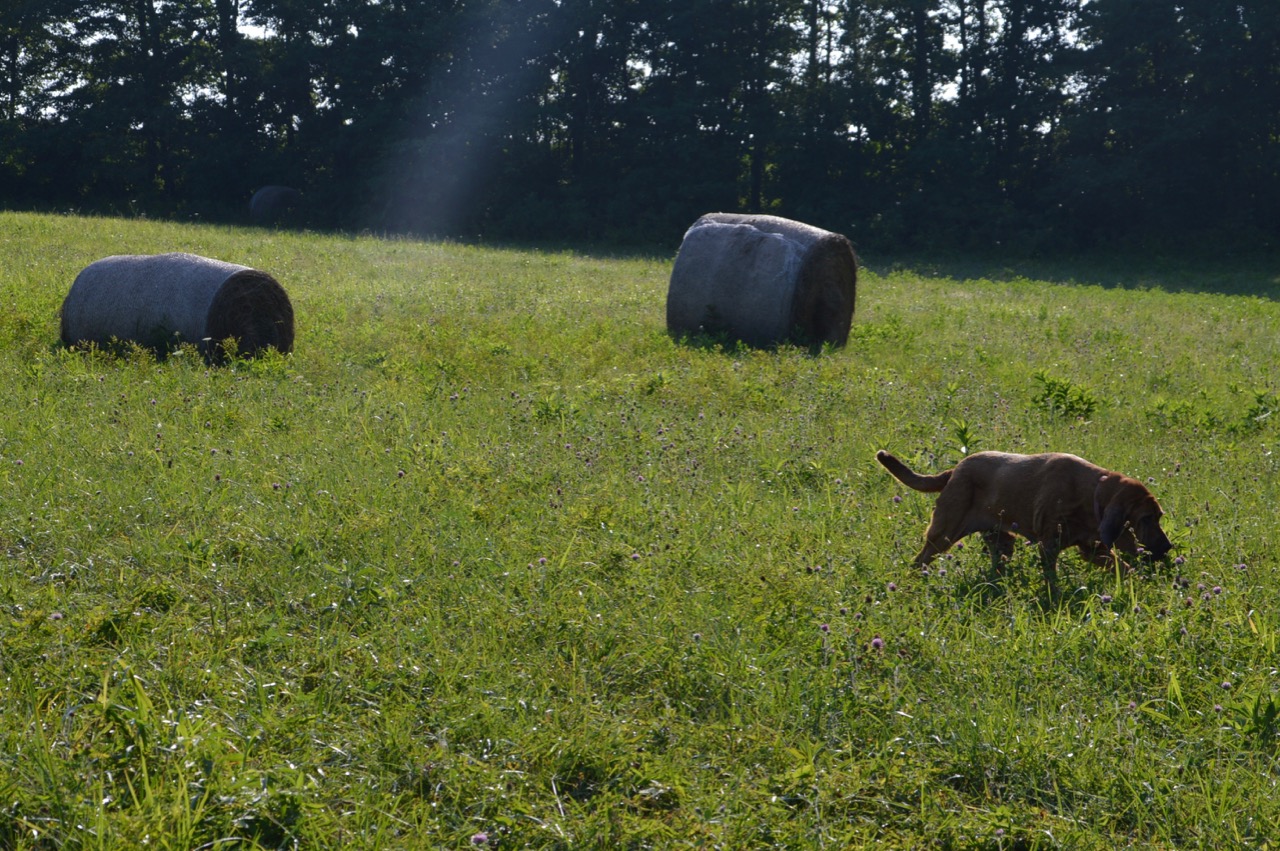 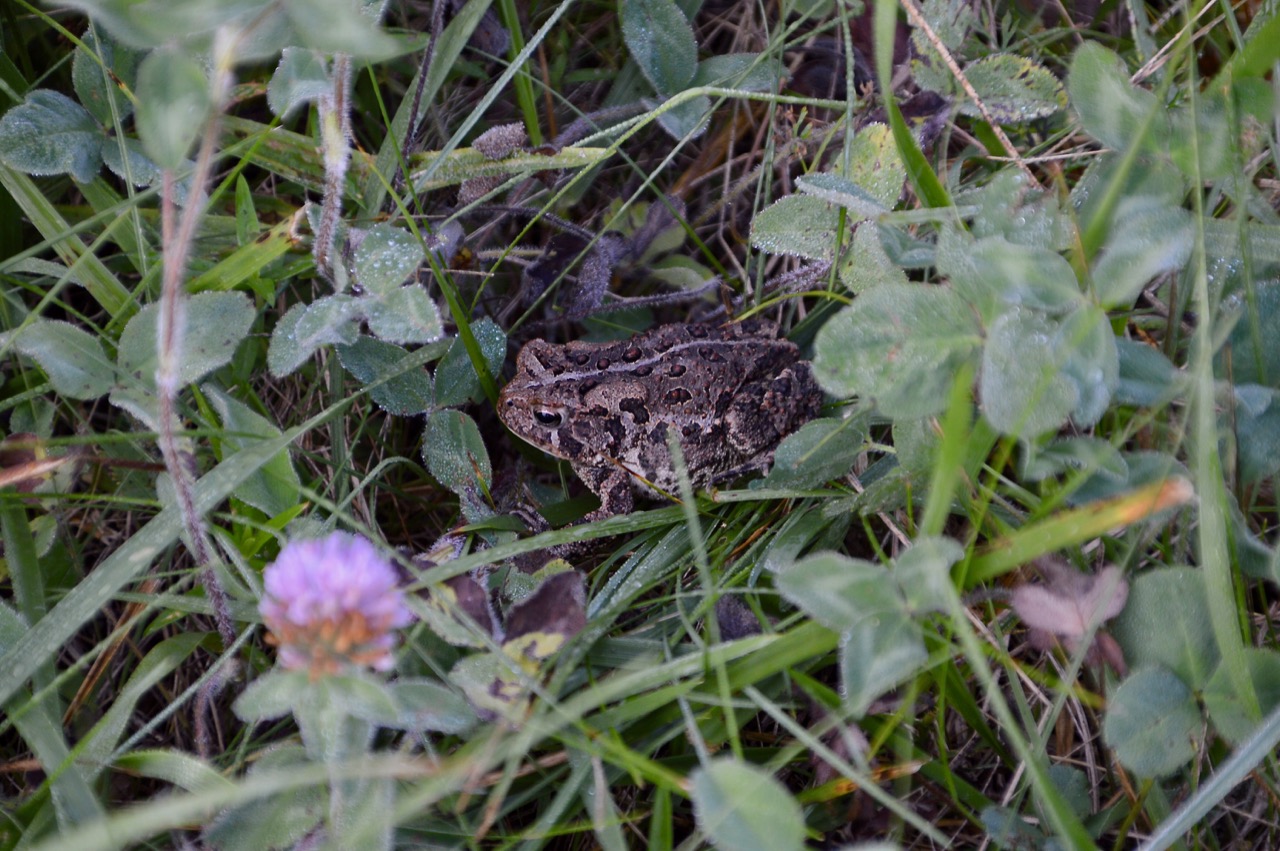 I am not sure why I had my head down walking, or what I was looking at ... I didn't miss him. He never moved as I took 2-3 photos hoping to get a good one. I passed him and stood and waited for Sadie to see what she would do. I now changed my statement from a few days ago where I thought Sadie was chasing a field mice to a toad. As Sadie's nose came closer I was expecting that I would have to yell at her to leave the toad alone. He was still there as she slowly walked right past him, giving him no acknowledgement that she had seen him. 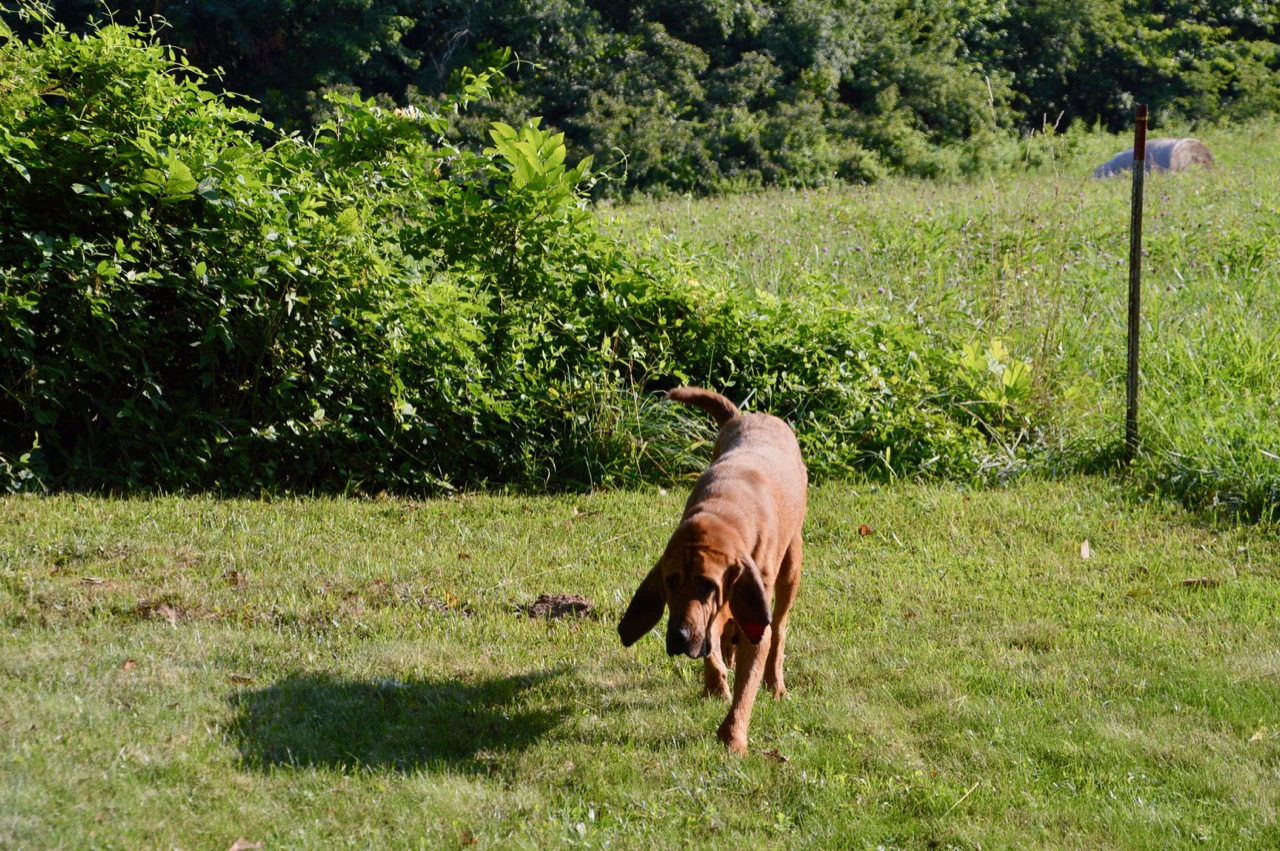 The mole traffic is increasing on the north end of the yard. I went out with my tamper to smash those small dirt hills back to ground level ... that usually makes no difference. 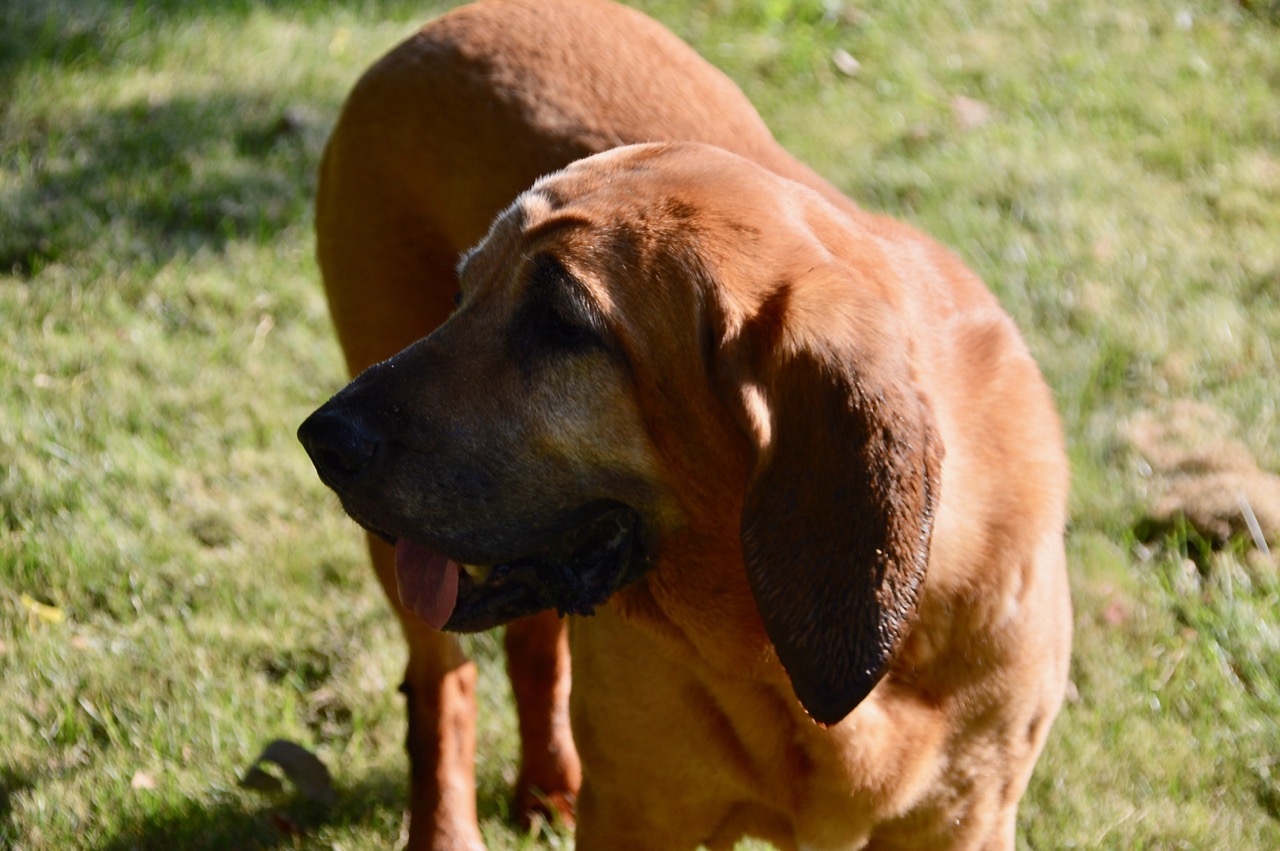 Sadie was ready to get back inside for her late morning nap until lunch is served. She did lay on her right side last night under the coffee table and slept while I watched the baseball games. She shows no sign of pain and really she shouldn't if it's just a fatty tumor. 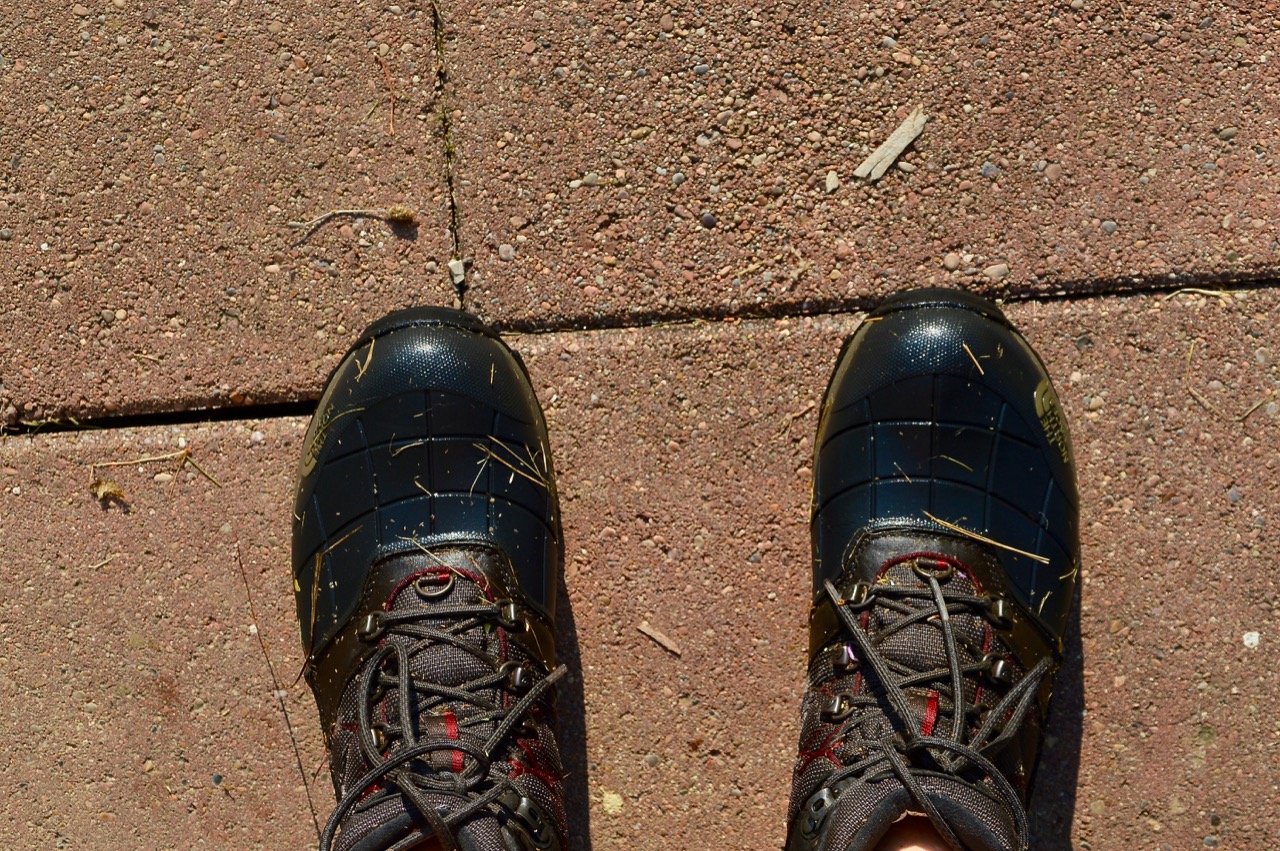 Yes, they are snow boots ... but they keep my feet dry on these morning walks where the field is covered in heavy dew. 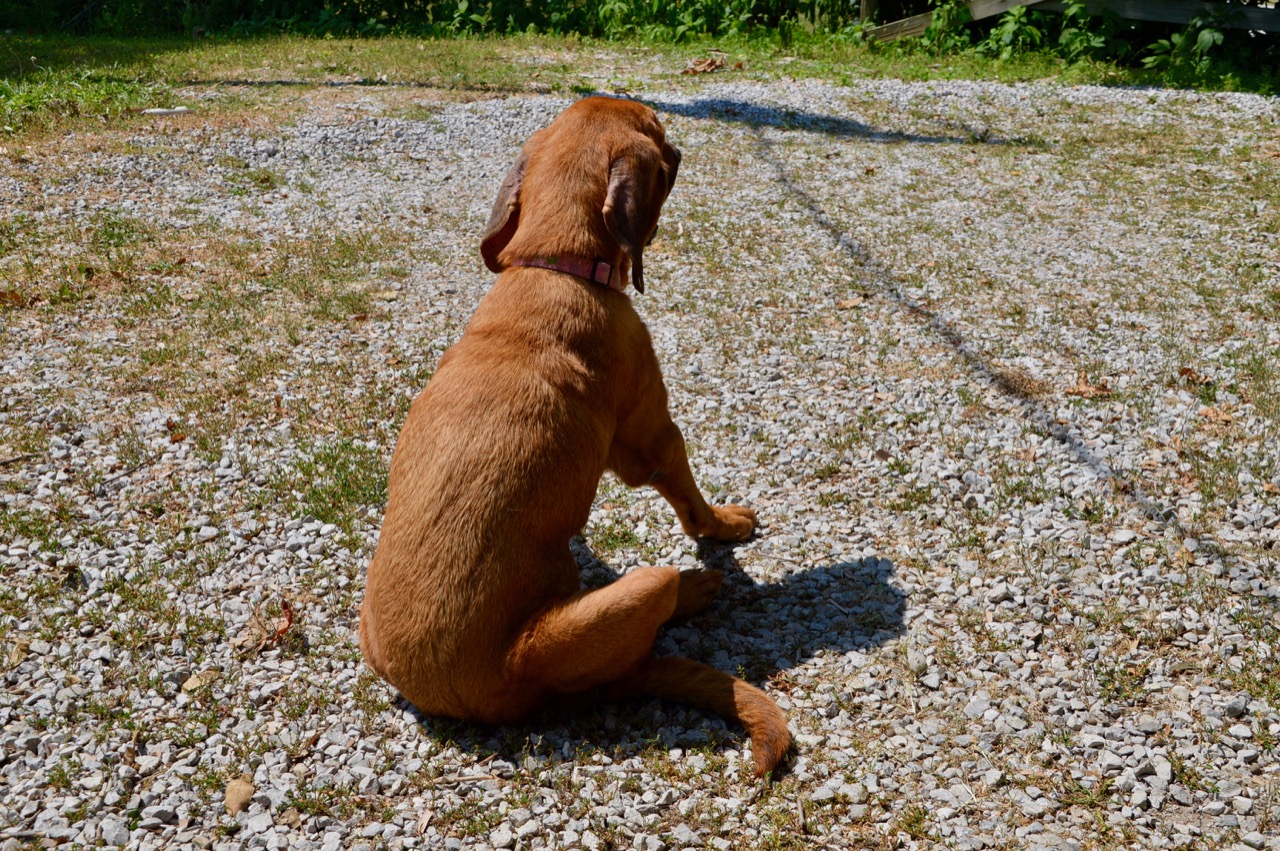 I had a lot of ideas on what to do this afternoon after the hounds were fed their lunch. I ended up doing other stuff. It was nice this afternoon, in fact all day. The low humidity was making all the difference in the world and when I saw how low it was on a weather app, I looked at two other weather sites and confirmed it was 41% around 1pm. Stella thought it would be a great time for me to pull out the hound mitt and get a nice brush. 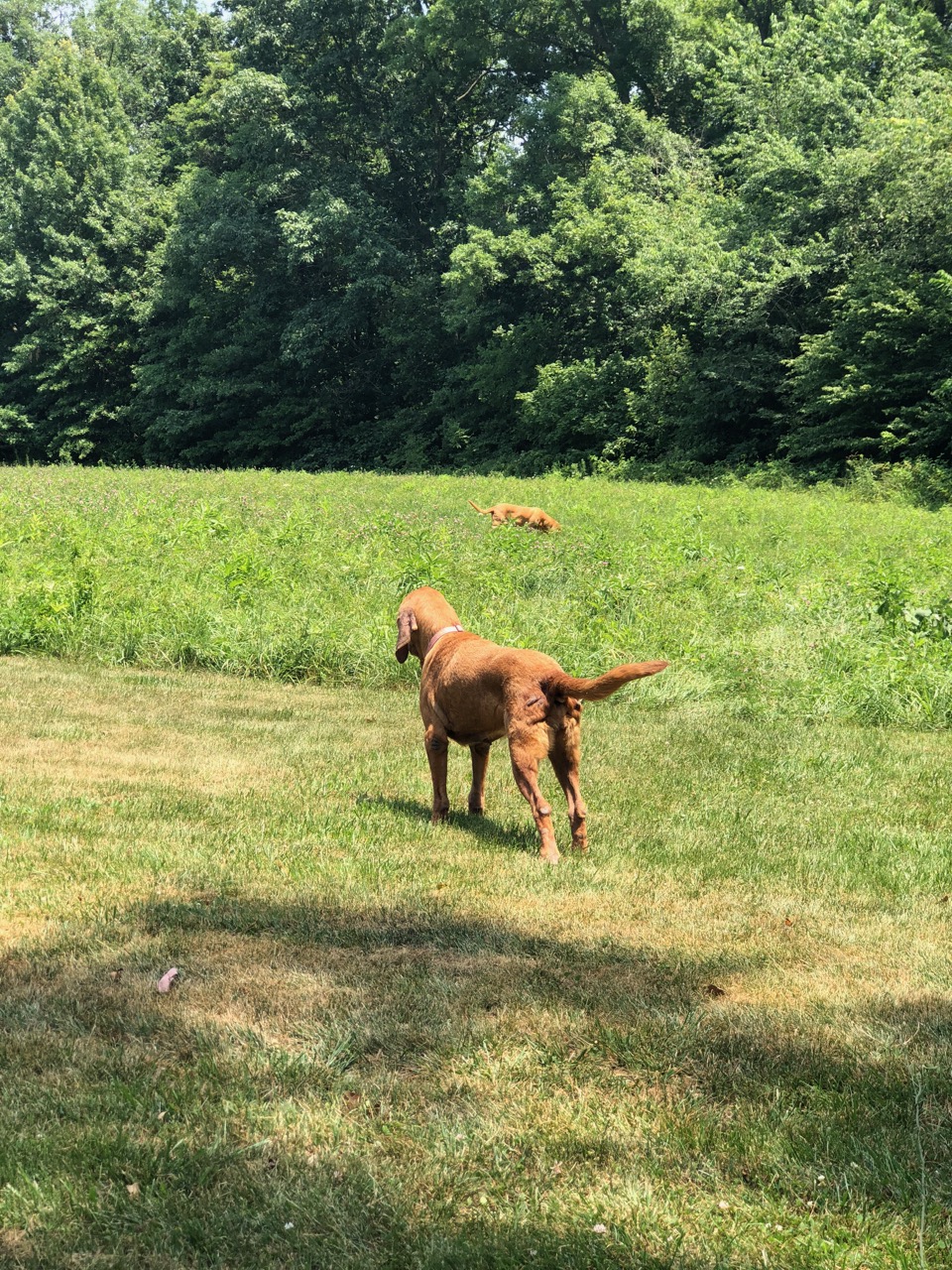 Sadie had so much hair being collected by the mitt, yet not all of it, I had to use the wire brush to get her undercoat. For some reason this year she has never stopped shedding. I barely had any hair come off of Heidi and brushed her while she slept. She has basically refused to leave the couch, only to eat today. She loves the air conditioning. 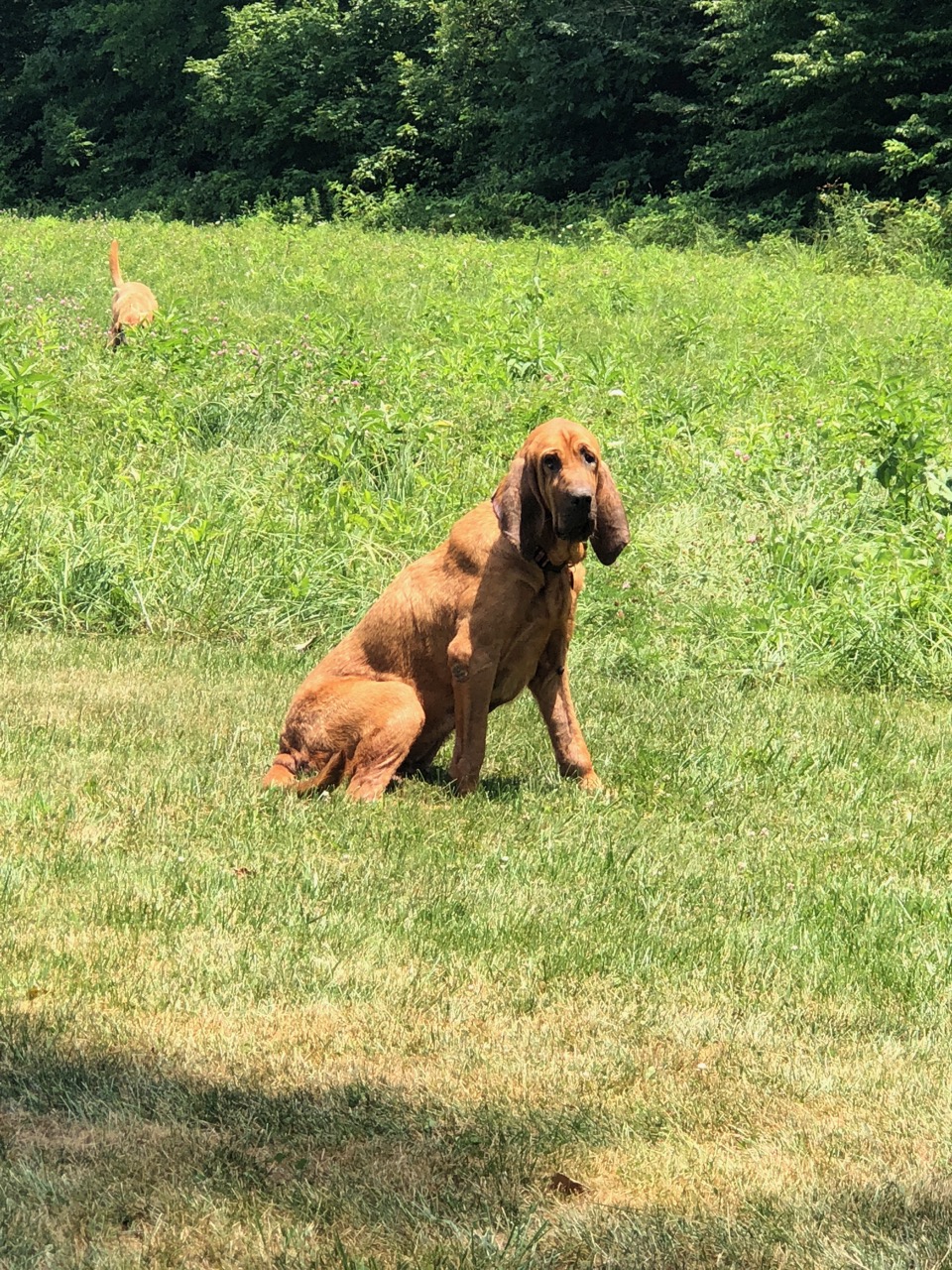 Since I was doing hound coats I decided it was also the perfect time to clean their ears. I don't use any commercial ear cleaner, just a basic 50/50 mix of water and vinegar. The vet is always impressed with how clean the ears are for the bloodhounds and basset hound, since their ears are built to collect wax and yeast. Their ears don't get much air and it takes routine cleaning to keep them from needing medical attention.

Stella was still amazed by the great weather around 2pm. She went to the door to be let out ... she had plans which you will see within the next two photos. 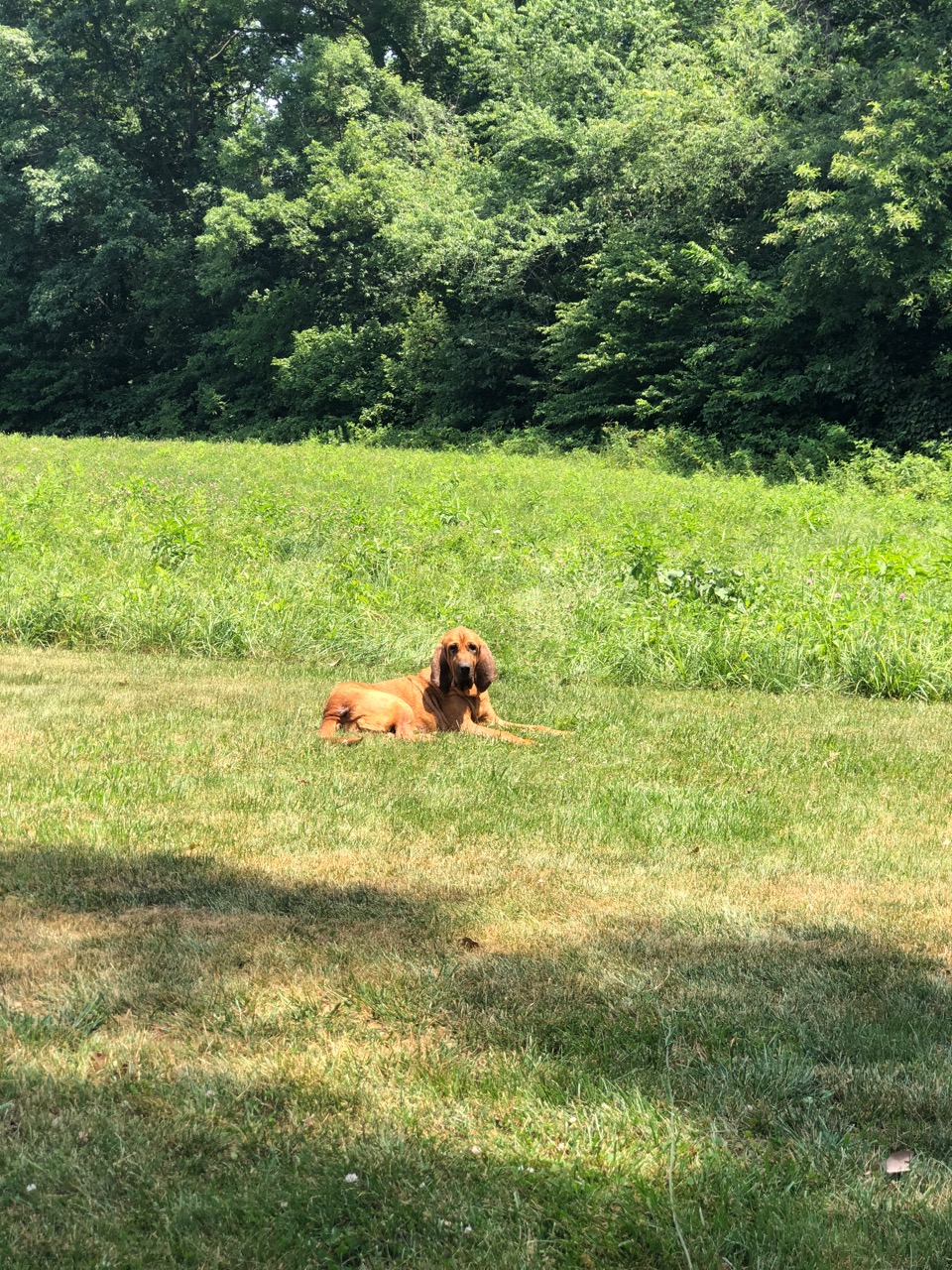 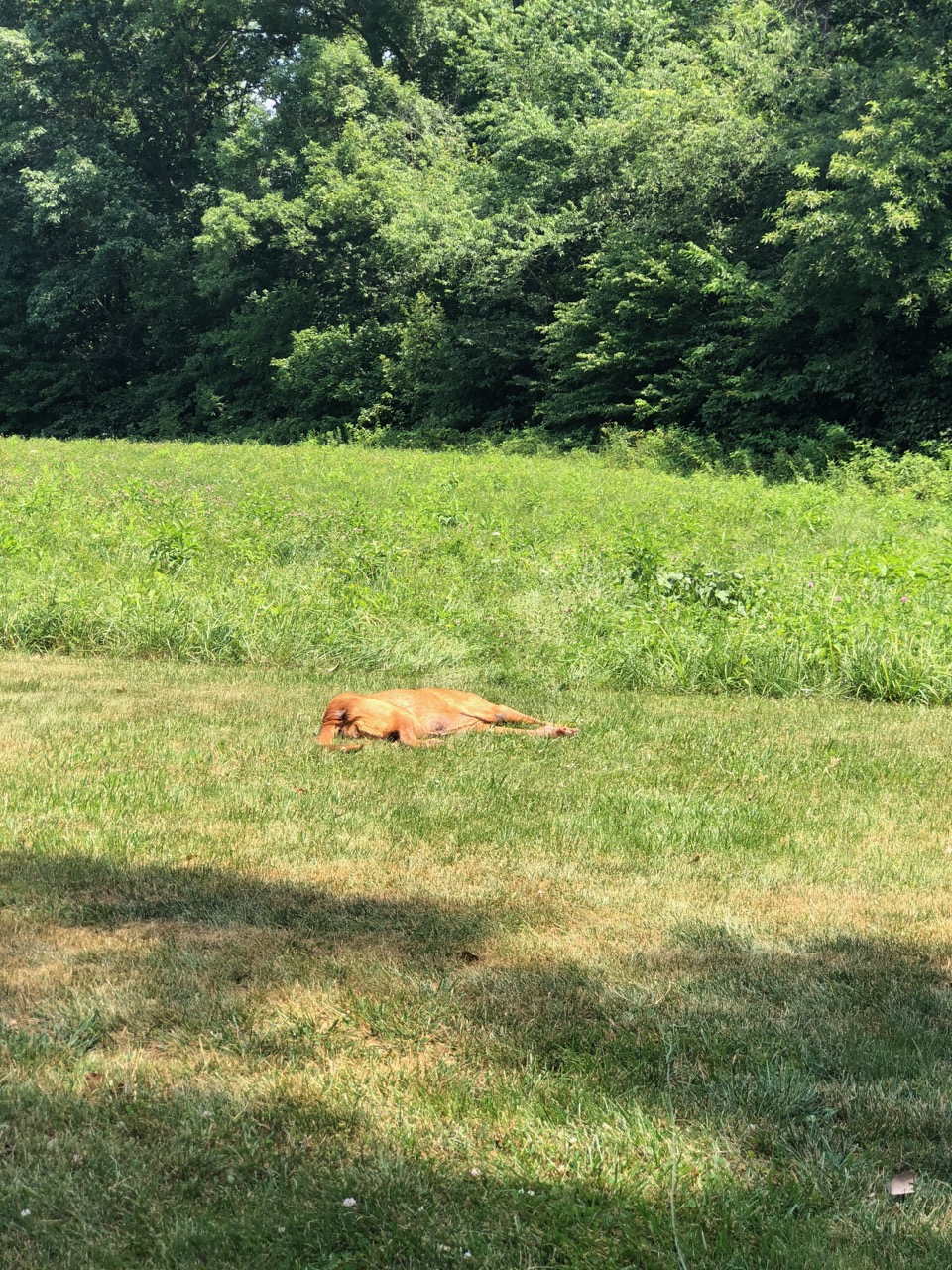 This morning I was about to make an appointment with a different vet, located downtown. While feeling the lump on Sadie it was not rock hard but it wasn't squishy like it was yesterday. It felt more the normal stomach although the size was still the same. I decided to wait until tomorrow morning and see if it goes back to having some fluid, gets harder or reduces in size. I know today based on what I felt, there was no fluid that could have been taken out by needle. I didn't feel any kind of fluid like I did yesterday. 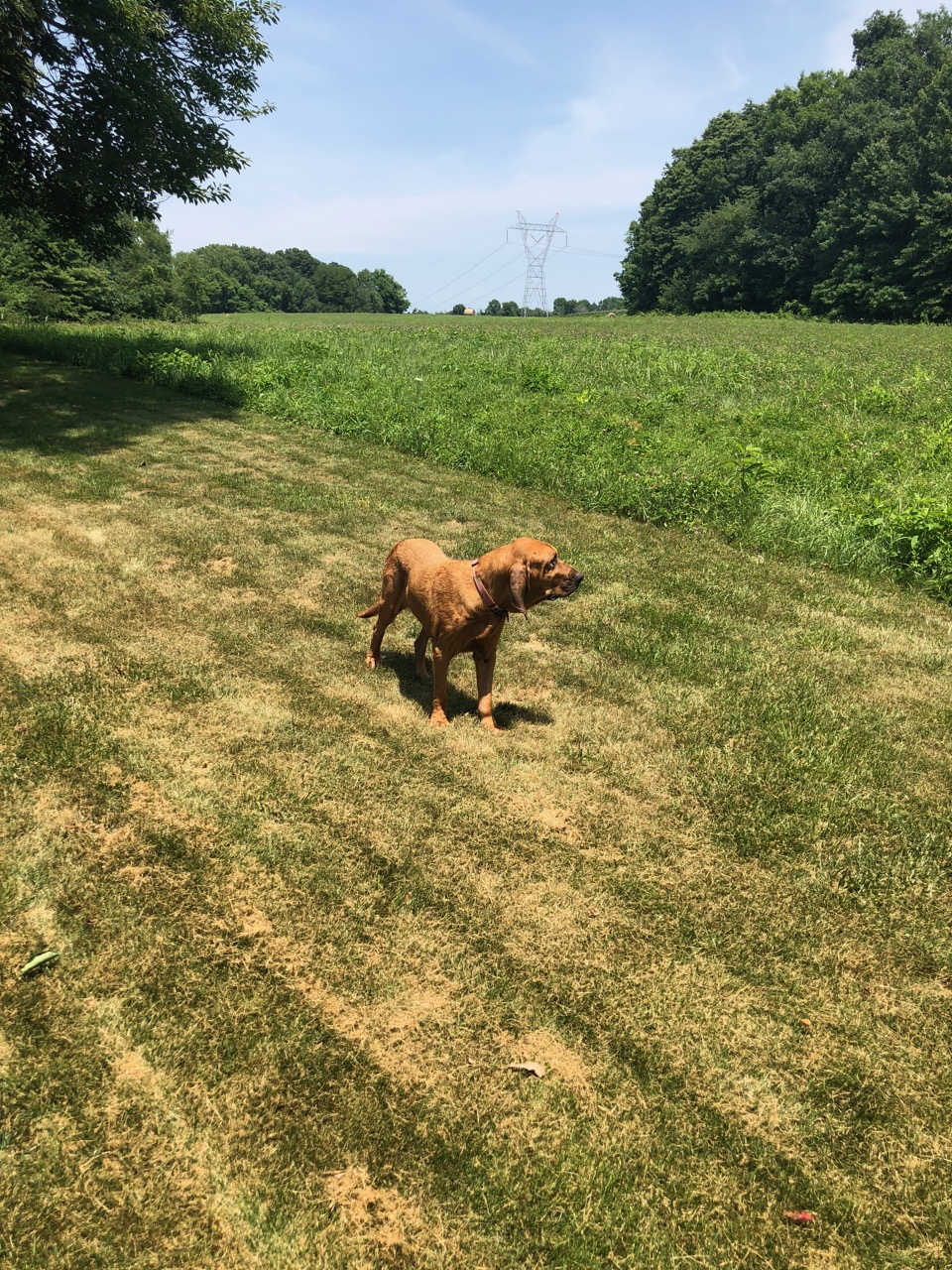 I should have never cut my yard a notch lower last Sunday ... 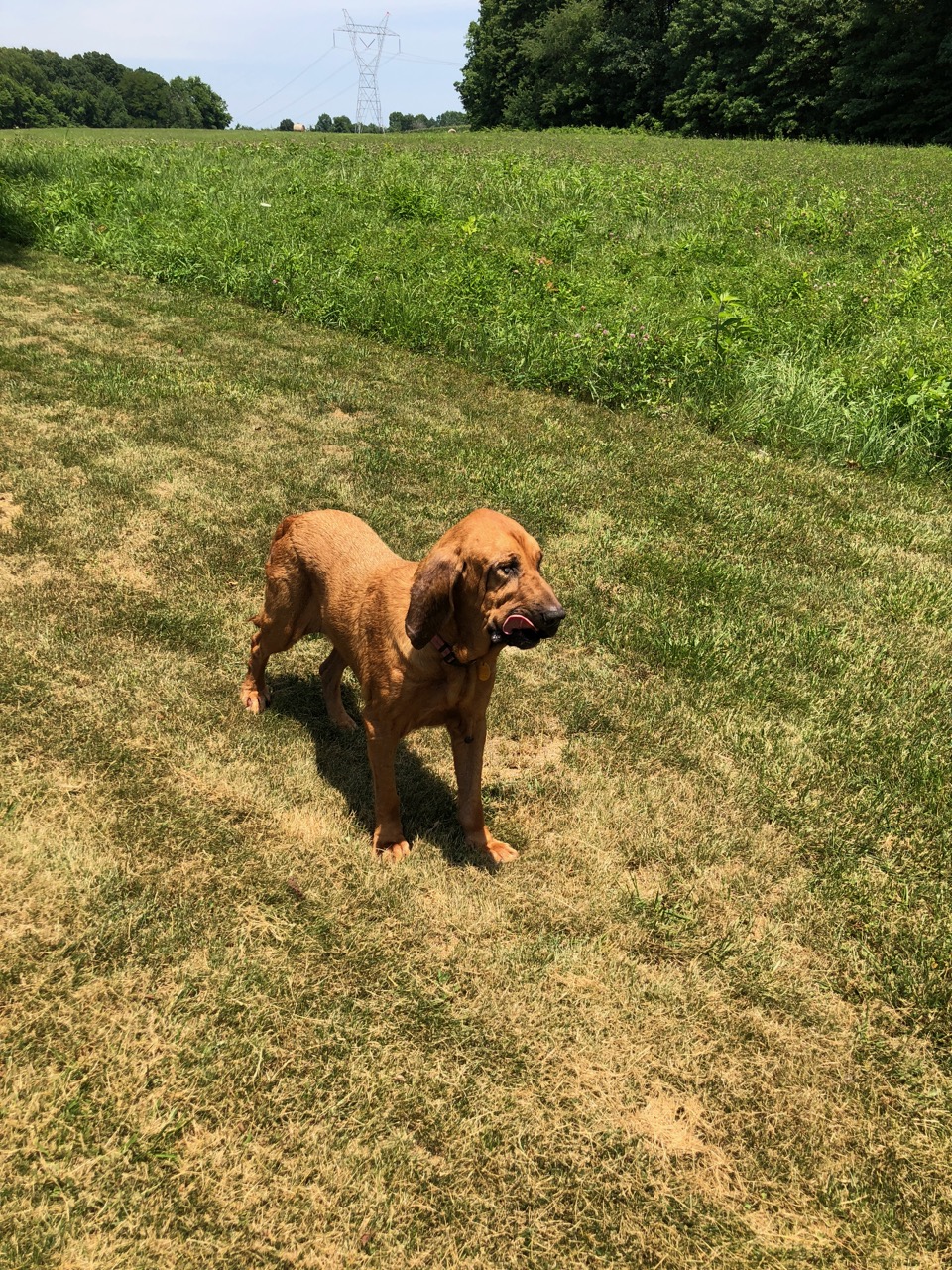 It wasn't soon before Stella had had enough sunshine and she was more than ready to get back into the cool living room or on the cool kitchen floor so she could take a nap. 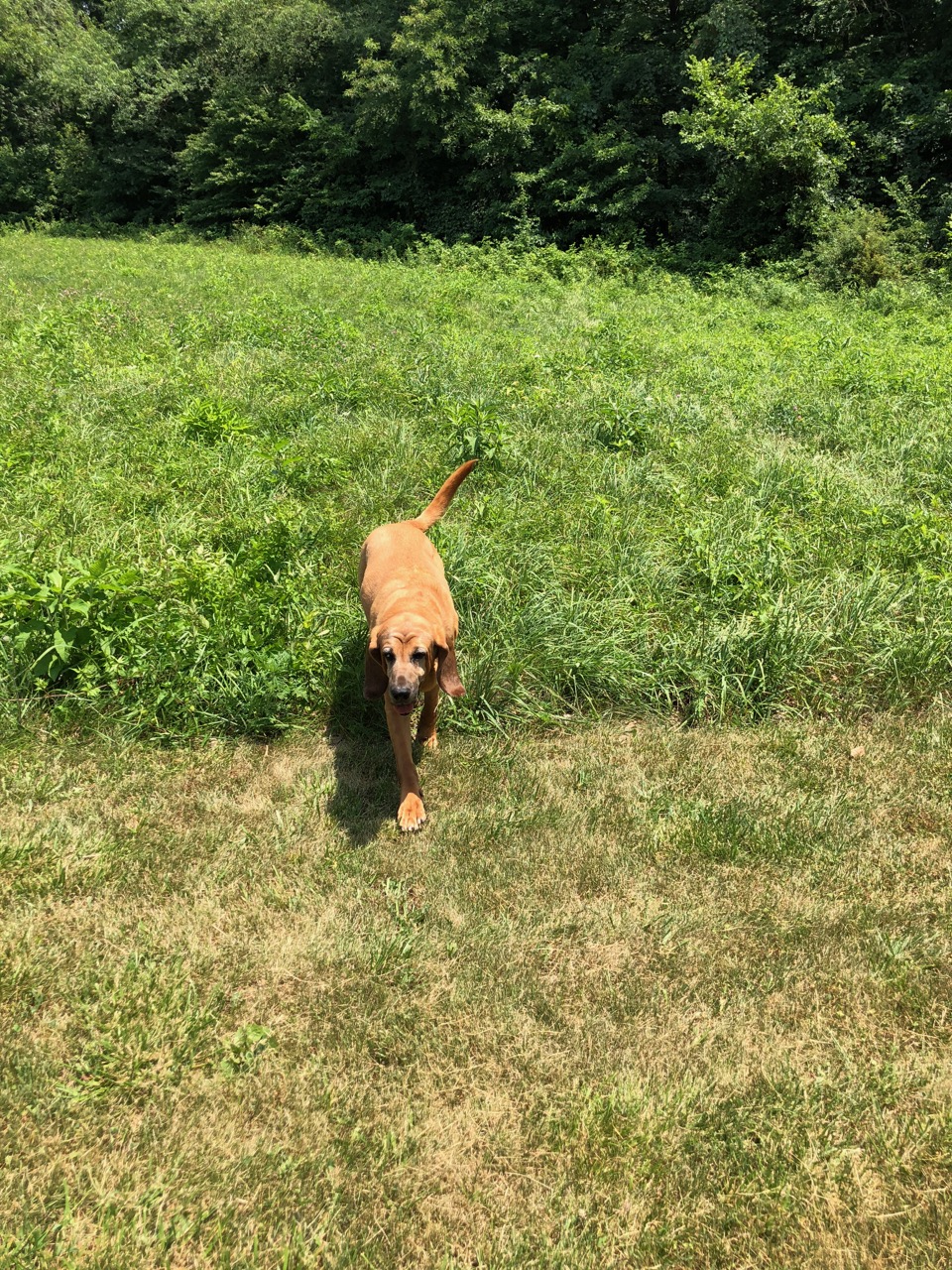 Sadie must have felt the same way because once I yelled her name, she came running out of the woods all the way to the yard, brushed my knee and headed to the door.

I have had a few email subscribers tell me that they did not receive their email about my new post yesterday until about 11am today. That is about 16 hours later than when I posted it. Since I also subscribed by email to see if the system works, I had the same results. Blogger has always been slow with their email notifications.

I guess you can probably tell the larger tall photos were taken with my iPhone 8+ camera. Sometimes I forget I have that camera when I am outside. It's better for low light and indoors than trying to zoom in on the hounds.

Hard to believe it's Thursday already, as if it makes any difference. Now if I can find some motivation to wash the Z4, things will be back to normal.