The Hounds Hide From The Heat 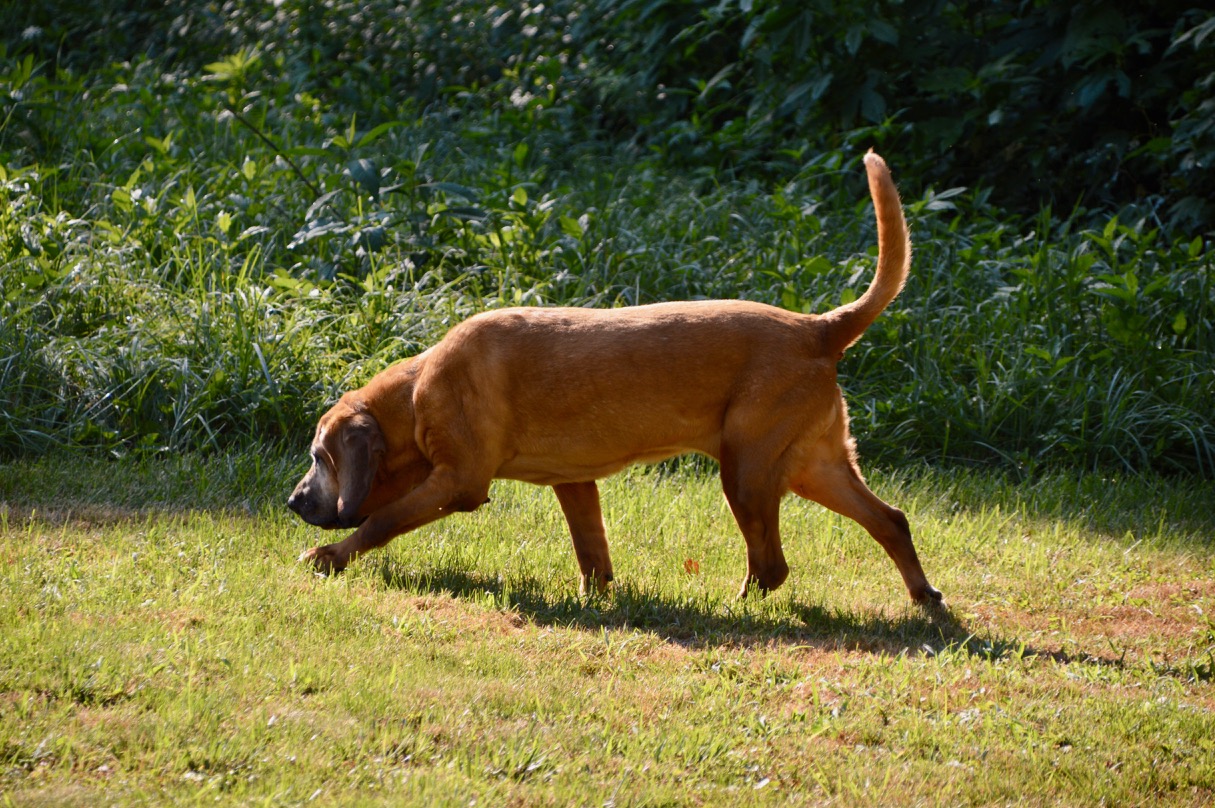 Sitting here during a rain delay in the Reds game tonight, so I thought I'd pull some photos from the first half of today. It was a busy Saturday but the hounds didn't mind because they really like sleeping all day in air conditioned rooms. It was a 'scorcher' by 9:30am, so I knew we would not be doing much. If they moved at all it was just from room to room, do their different favorite sleeping spots. 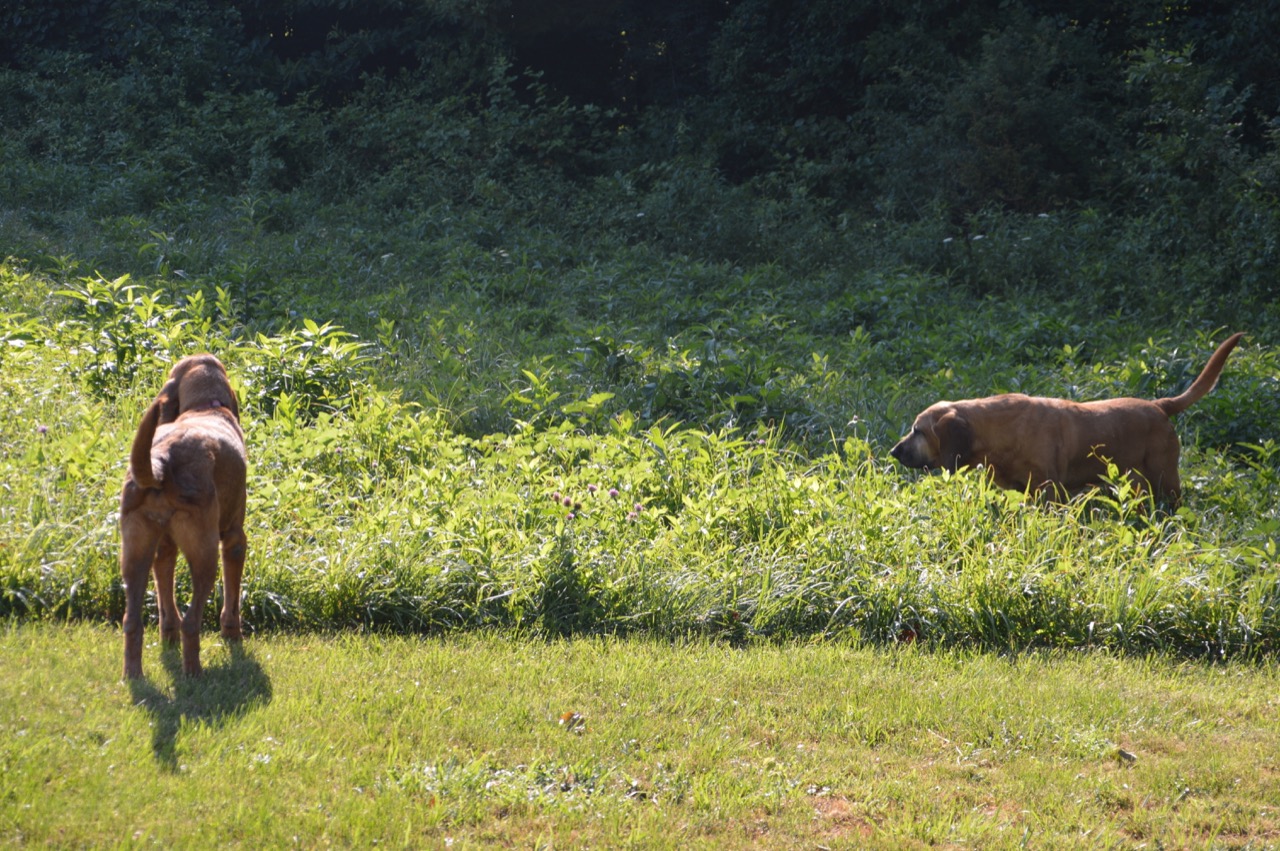 Stella took a little while to decide if a walk was needed this morning. About the time I was about to take a step into the field she cut me off, stepped on my foot and jumped in front of me on the path. Just long enough to veer left to pee. She then headed back to the path way ahead of me to join Sadie. I don't want to read too much into that. She was just making a normal bloodhound move ... I think. 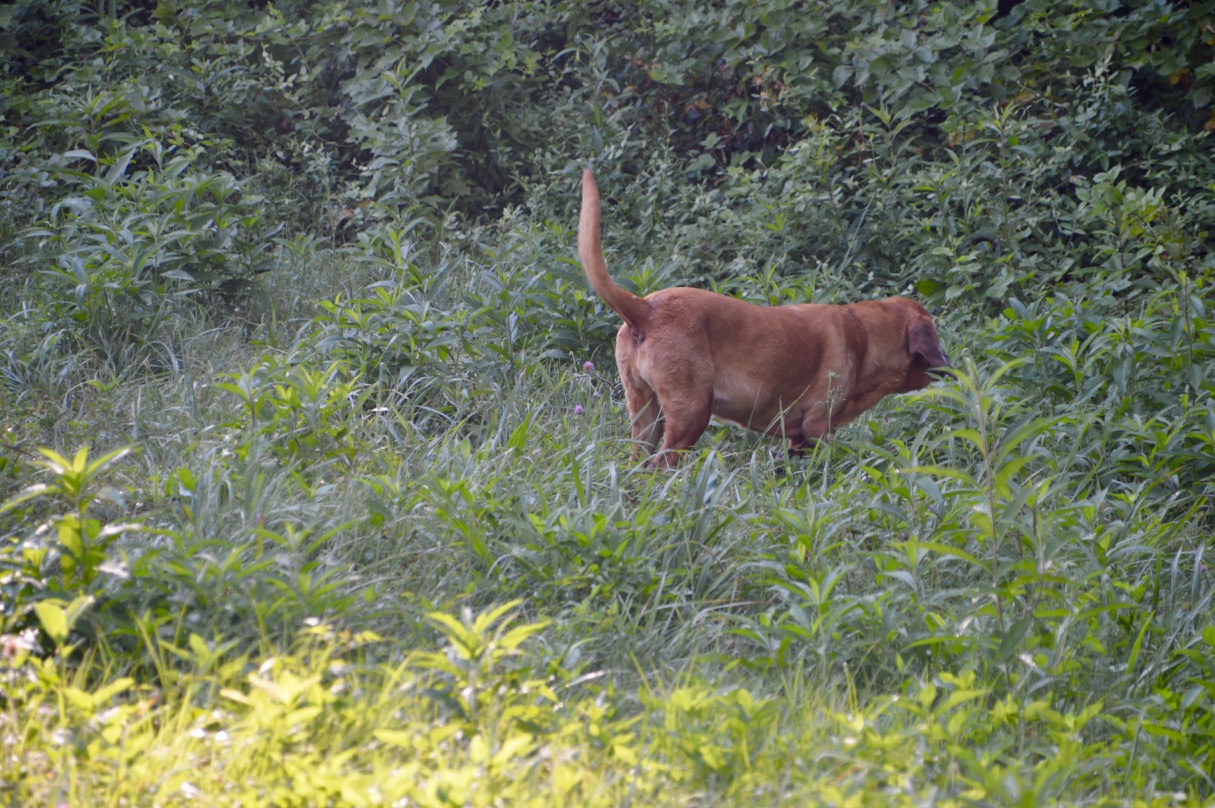 Sadie was sure she had cornered a rabbit. No barking (she never barks), and didn't go into the woods but she was positive that she had ran the rabbit out of 'her' field into the woods. I checked the right side of her first thing this morning before, running my hands over both lower sides of her.

There still is a slight lump on her right side. It is just like yesterday. It is not rock hard and it is not squishy as if there is fluid. It feels like muscle if anything. I still know it's not normal so I will continue to keep an eye out for any changes. 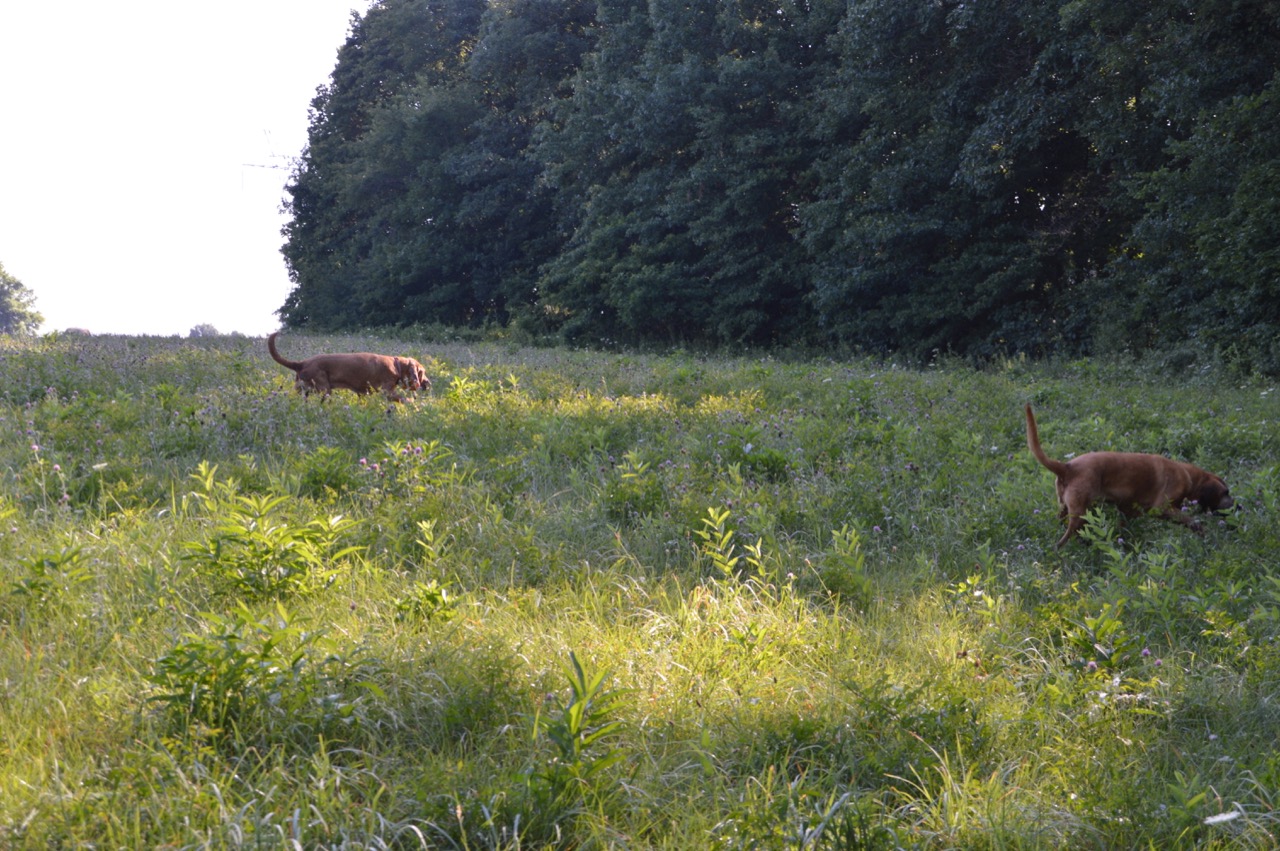 I wasn't sure what I was going to do today. The more I read about TVs, the more I felt I didn't need one. I am getting most of my reviews from online searches. Most of these sites are not selling any kind of TV, most likely have affiliate links built into the reviews and like anything else ... everyone has different opinions, different lab test results and different recommendations. 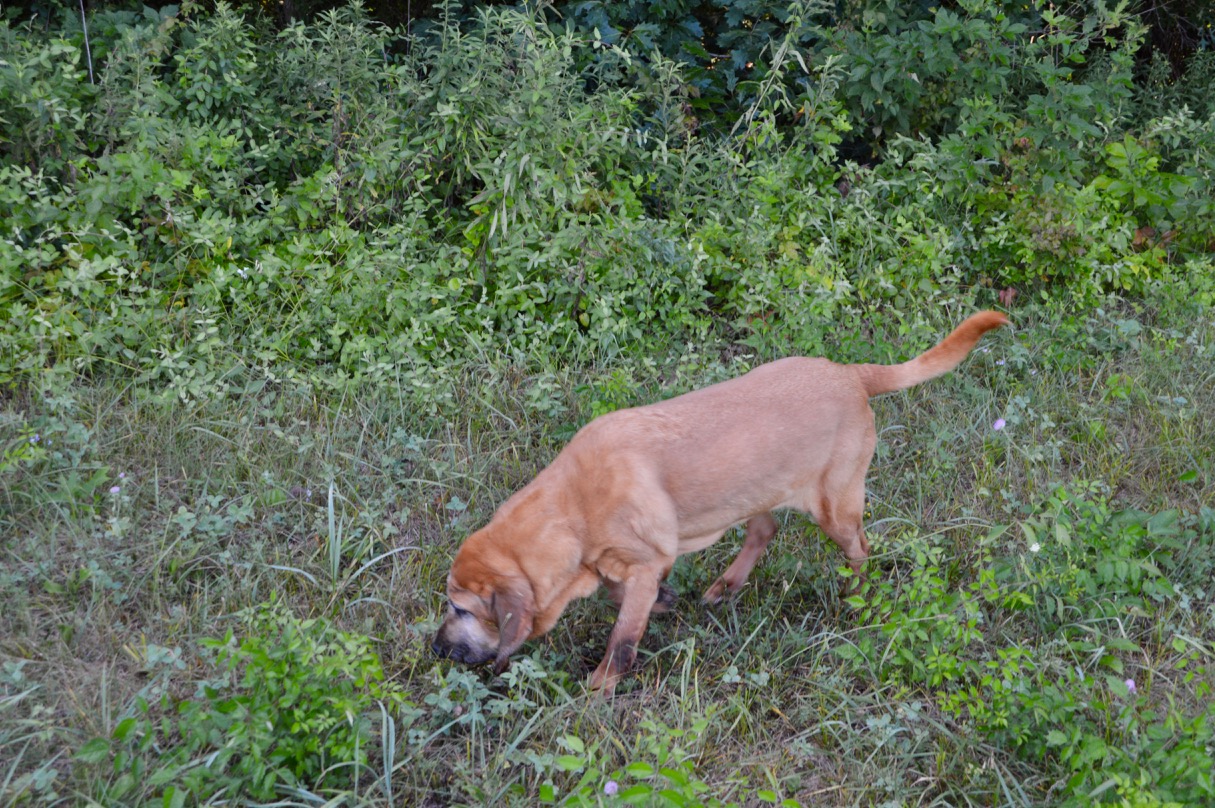 I was set to start more reading about the differences of HDTV and 4K UHD TV, when I had an article drop into my Feedly account this morning about using your DSL camera correctly. That gave me some information to look at again and maybe fine tune some things. Plus I could double check some camera settings. Just like the TV reviews, each has their own ideas and experiences in the camera field. 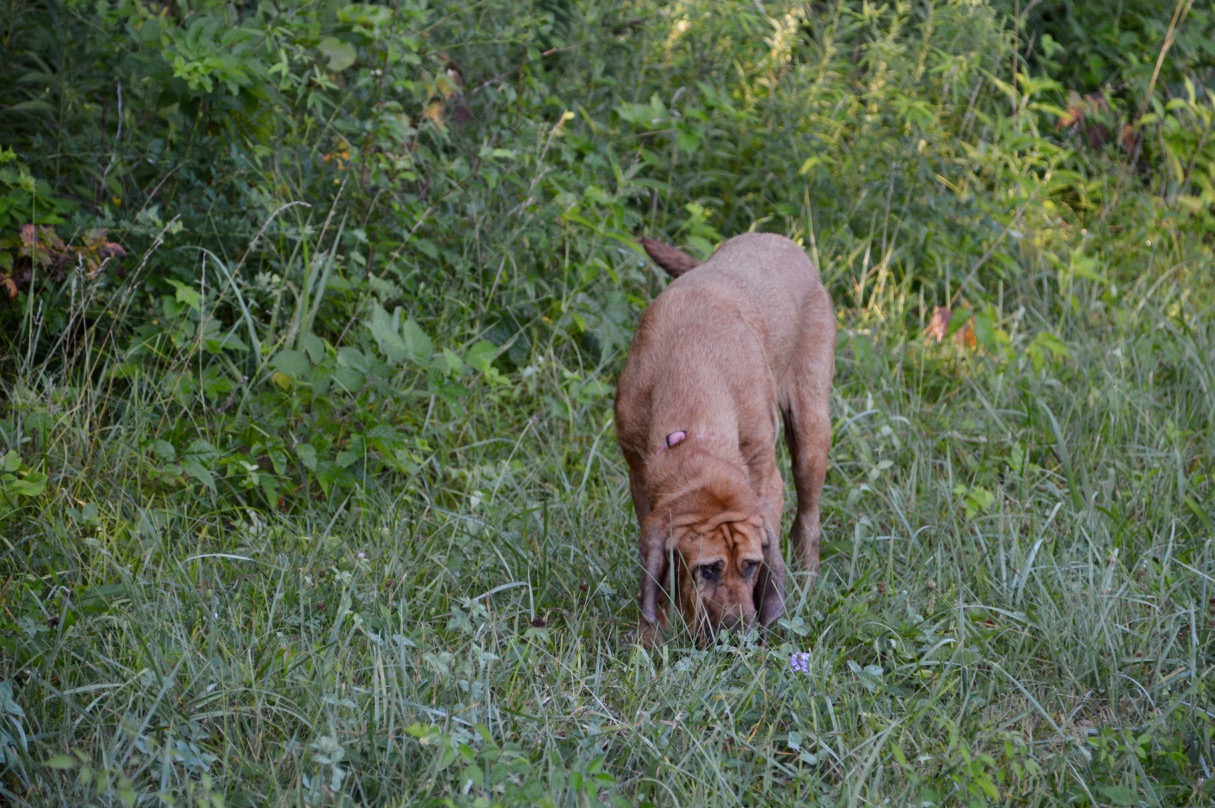 I did find a good website that explained a few things that potential buyers don't consider when buying a new TV. One of those factors is how far do you sit from the TV screen. Based on my distance of 7'8", I did not need any screen bigger than a 55".

Based on their testing the human eye would not be able to see the difference between a HD TV and a 4KUHD TV at certain distances compared to the screen size of the TV. Depending if you spent most of your TV time watching prime time shows, movies, sports, Netflix, or different apps ... that would also be a factor in what TV you should buy. 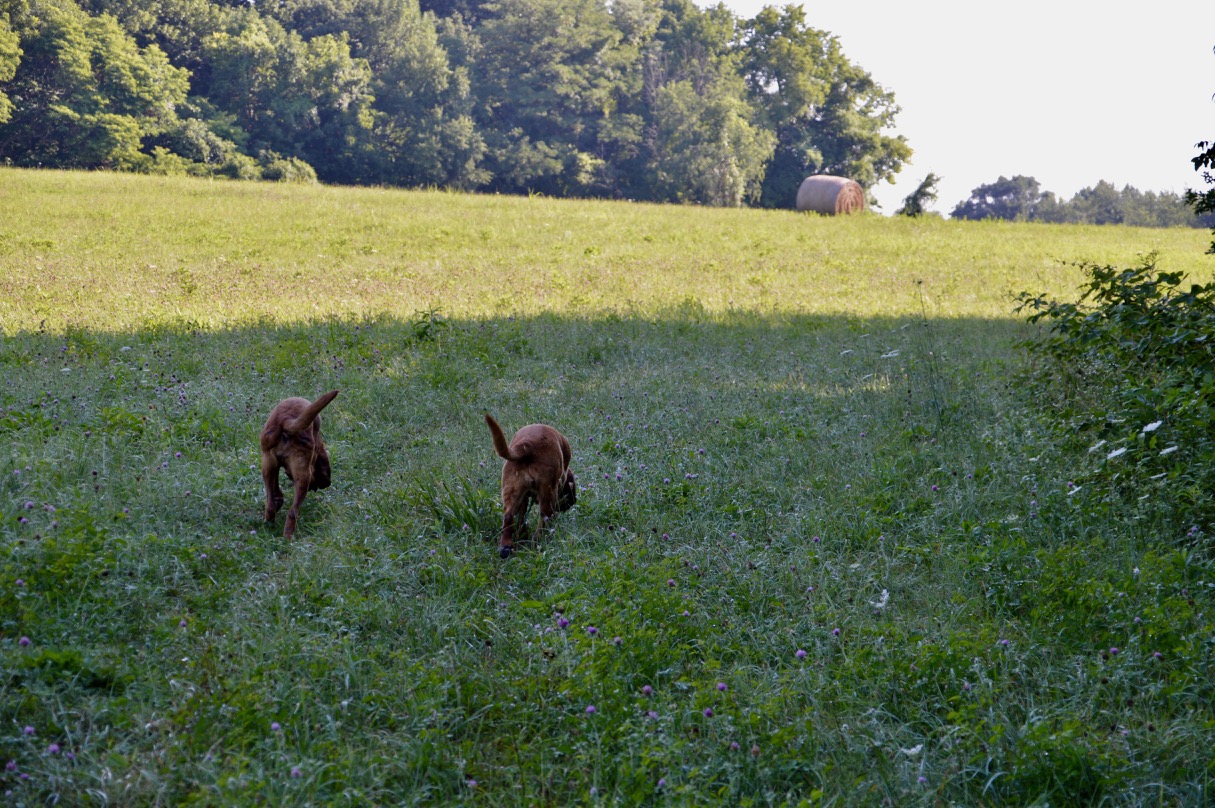 What happen to just buying a TV, plugging in your satellite or cable box, maybe your stereo or surround speakers and a DVD player then turning it on?? One TV fits all. So I stored that idea away for later research.

When I bought my TV in 2010 it was one of the largest screens available but it also fit in the back of my Toyota Corolla with the seats folded down. The HD market had forced me to upgrade because the TV shows were no longer matching up with my Sony SD TV. It turned out to be 46" and still continues to do a good job. I decided to continue my research but like anything I buy, I was going to set a limit on how much I would spend ... IF I bought something new. 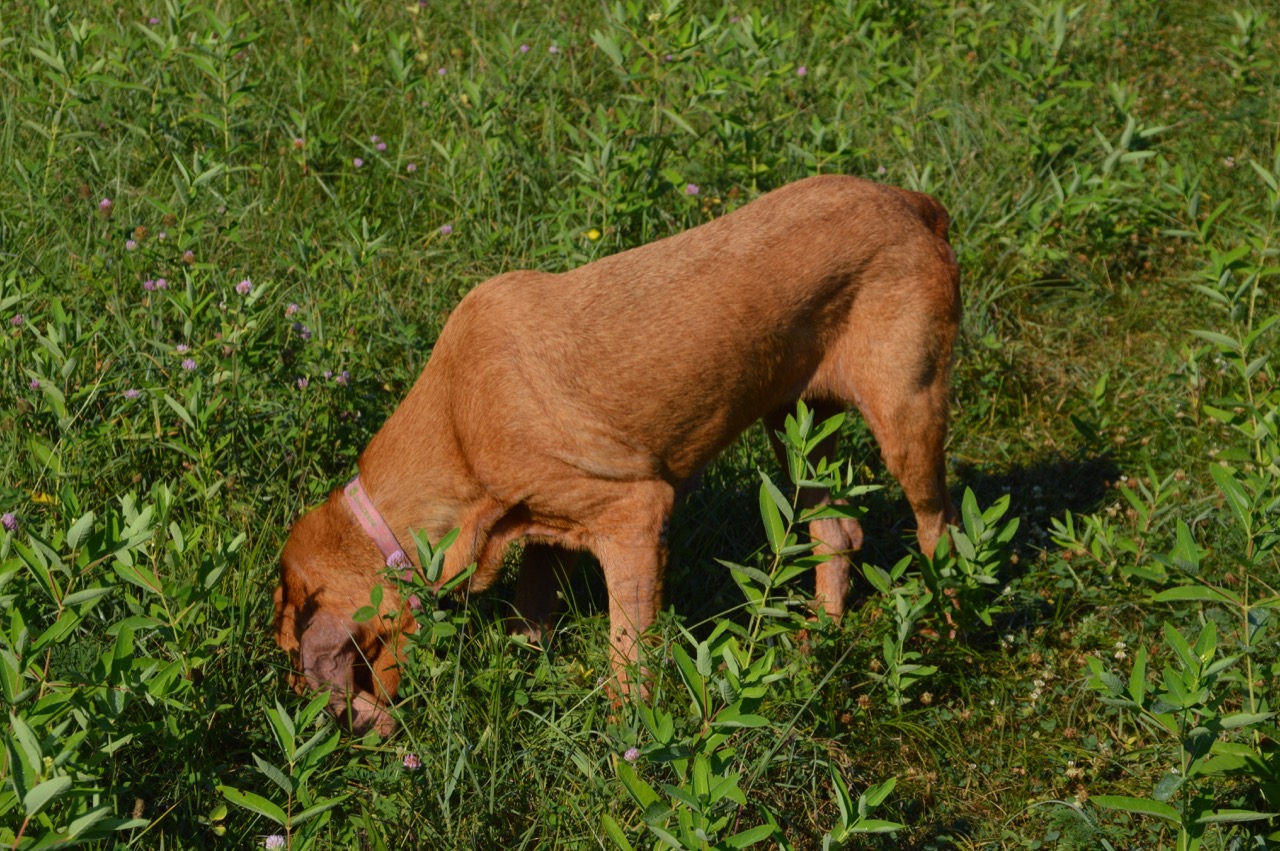 There are so many 'behind the scenes' electrical functions that go on now it is simply hard to find one TV that does all those well. Every TV has specs that are pretty close with their competitors and each of them has something you would want the other to have. I guess that is just like anything else electrical from smart phones, tablets, computers, laptops etc. 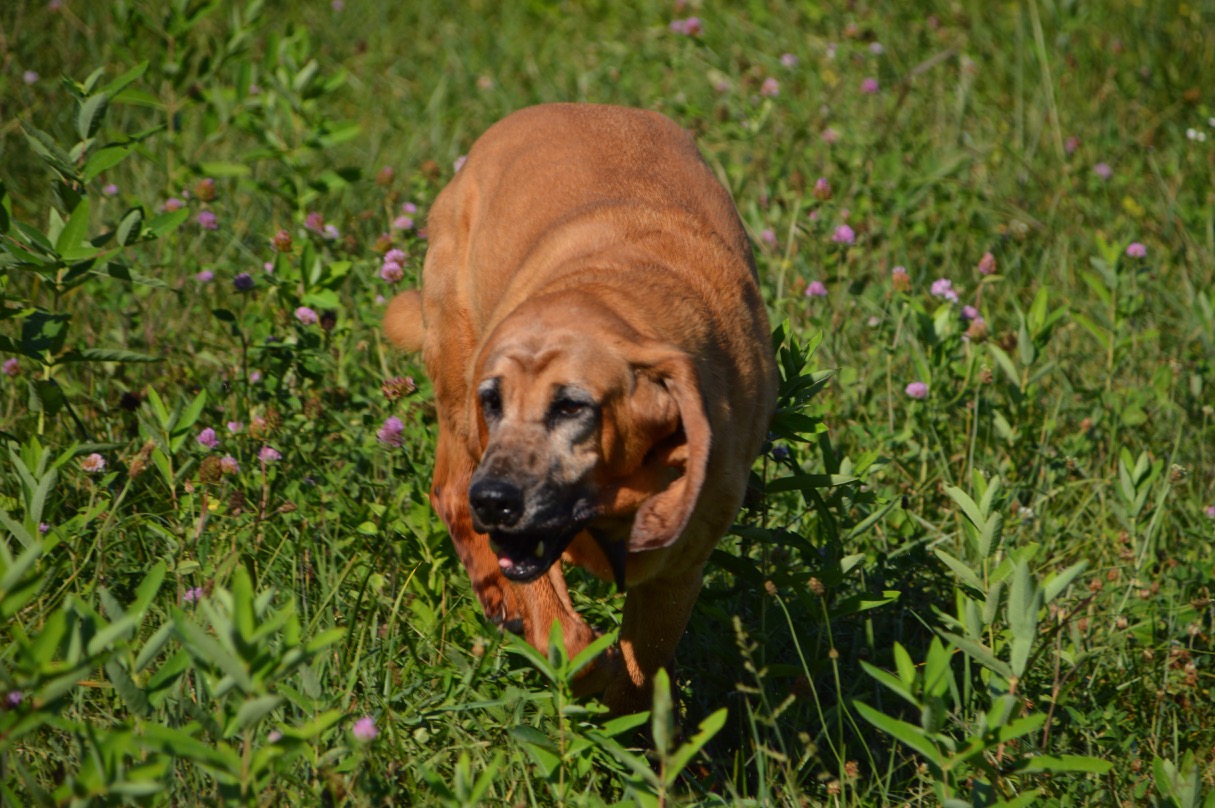 Sadie still shows no sign of pain, discomfort, lack of energy, or appetite with her small lump. Even in the hot morning she could have ran all day if I had let her. 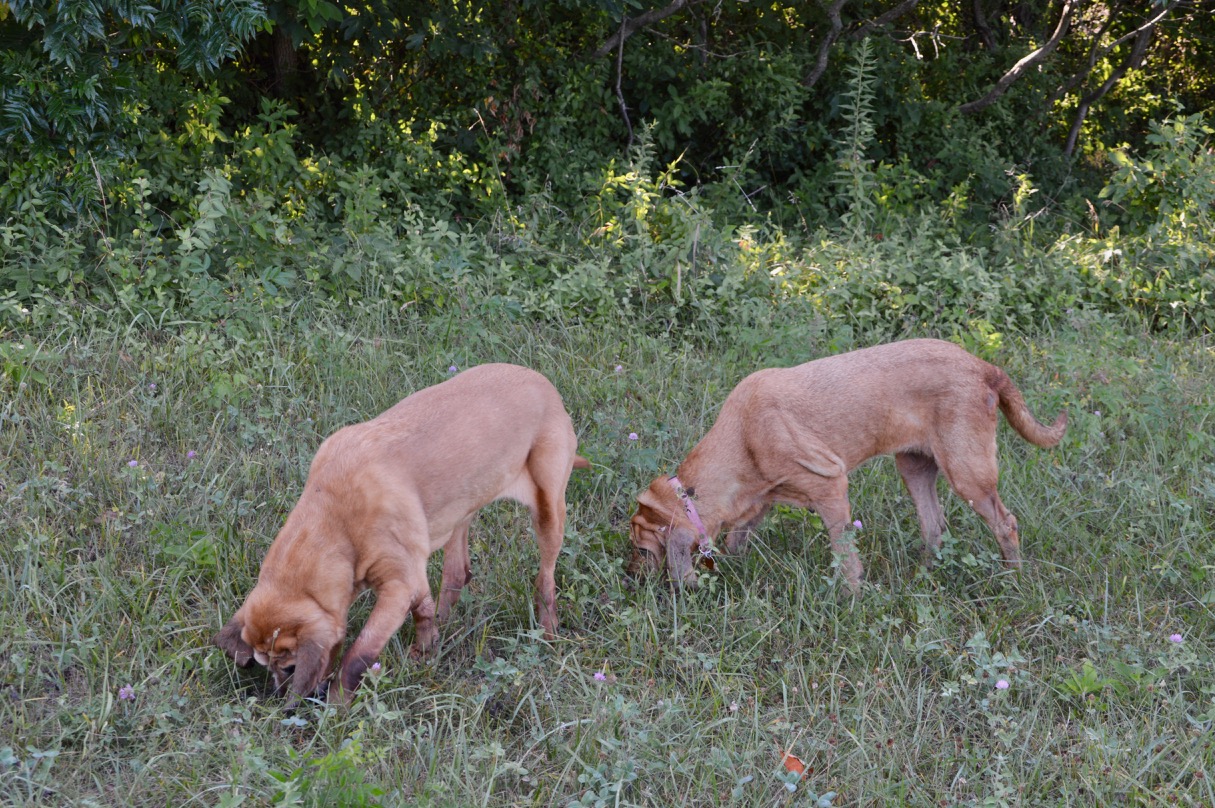 Stella was moving right along with Sadie this morning. I used very little verbal herding to help her complete the walk. I think they are slow until I remember the days of Winston lagging behind with legs not 4" tall and a pace slower than Stella. Like Sadie, his nose would always lead him off the path and making the walk longer. 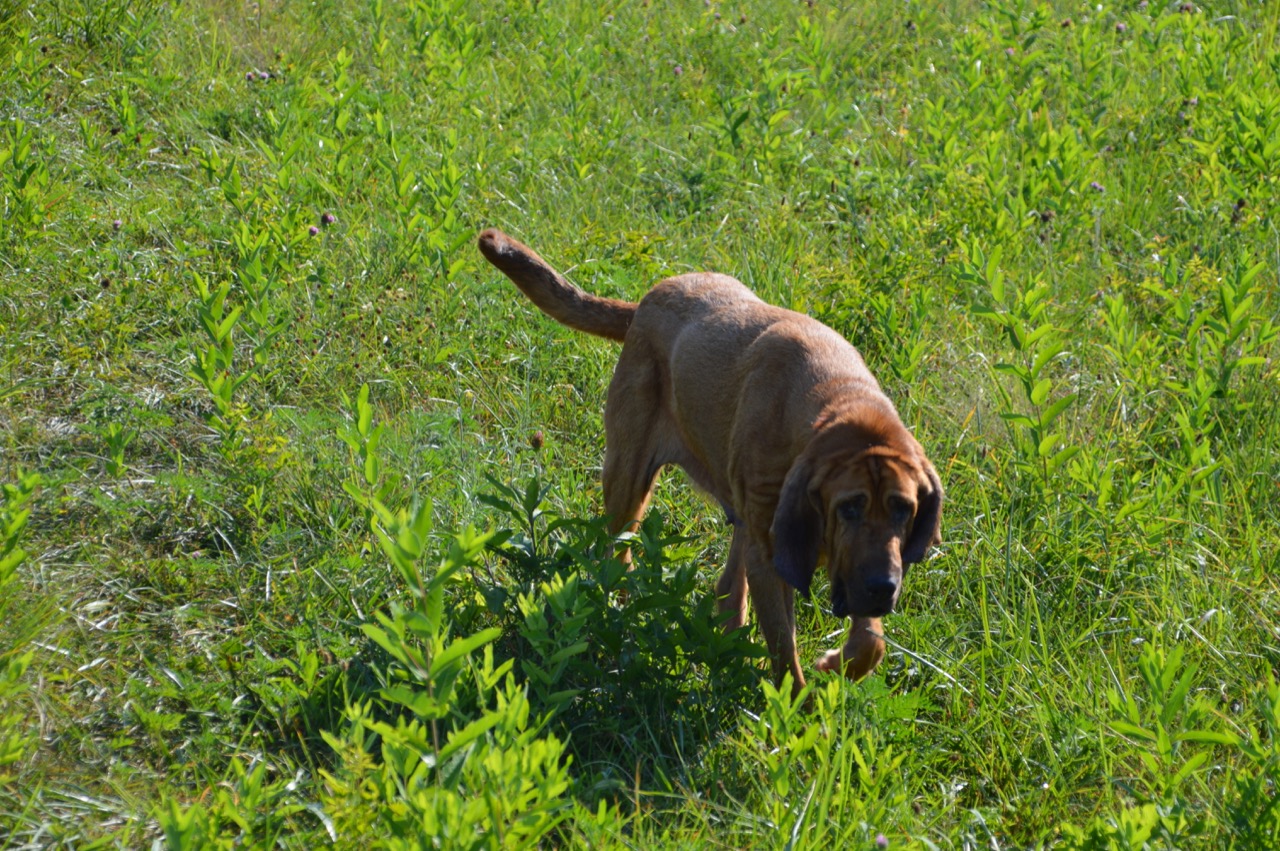 I could tell by the end of the walk Stella was getting hot, because I was hot. Plus her jowls were hanging down more than normal. We didn't have too far to go before we could stand in the shade under the Mahogany trees in the backyard. 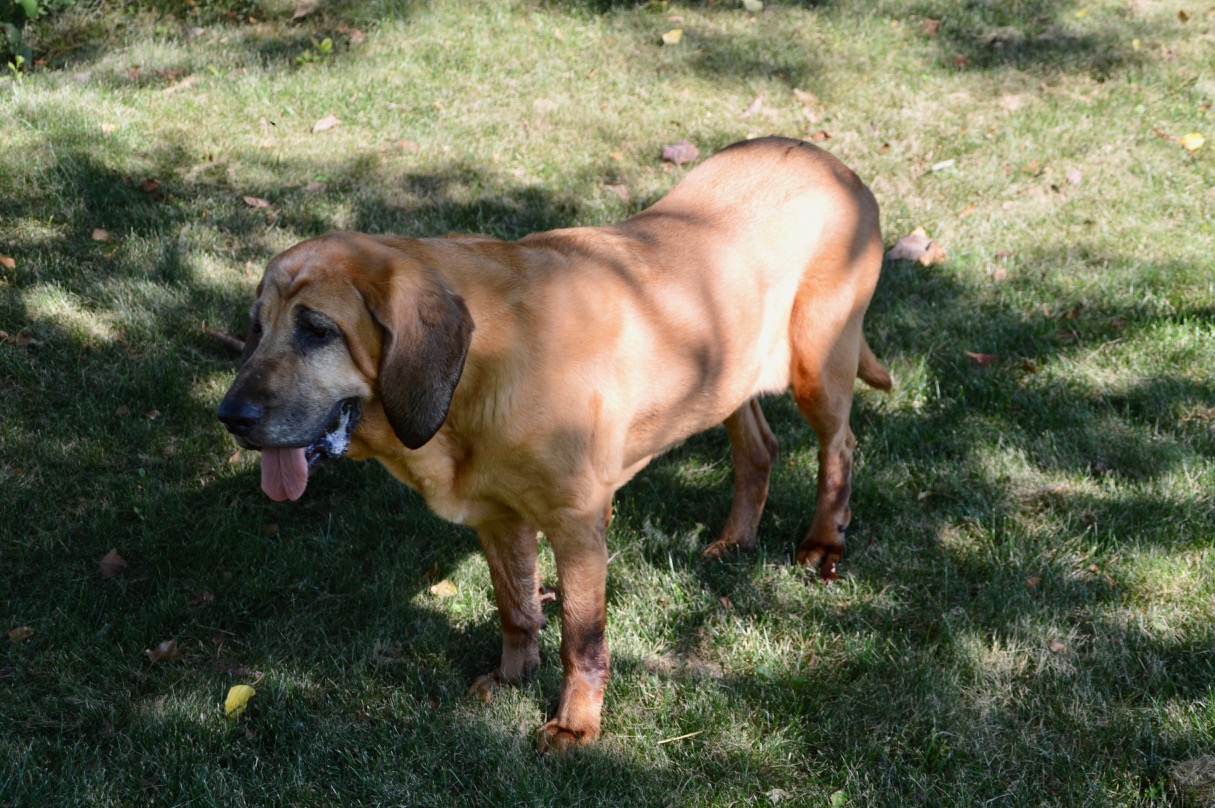 This is the sign that Sadie not only had a great walk but got some of her aerobic exercise in when she wanted to. 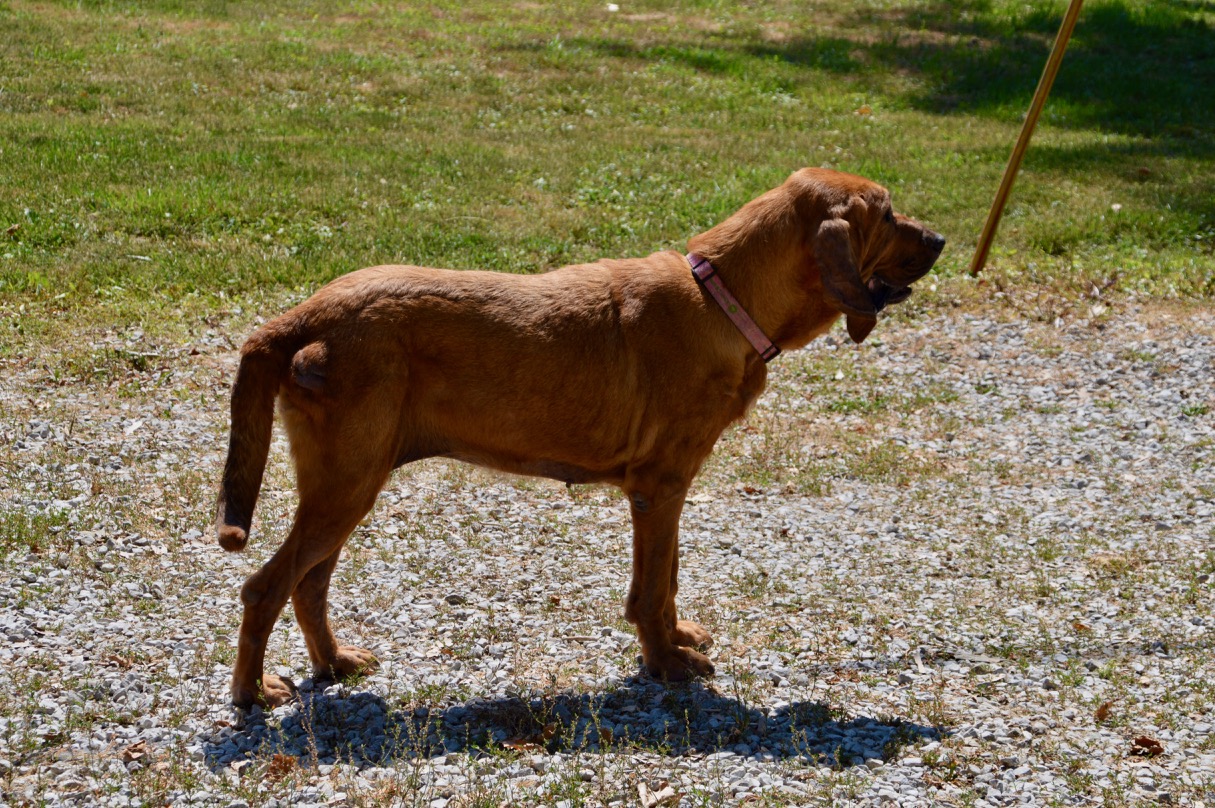 We stepped outside about the regular time after lunch. Heidi practically refused to come outside. She made a direct right hand turn to the front yard one step out the door and by the time I was finished talking photos of the bloodhounds, Heidi was standing next to the door to go inside. She is a very smart basset hound.

Stella had already decided there was no way she was staying outside any longer than 5 minutes ... as did Sadie. 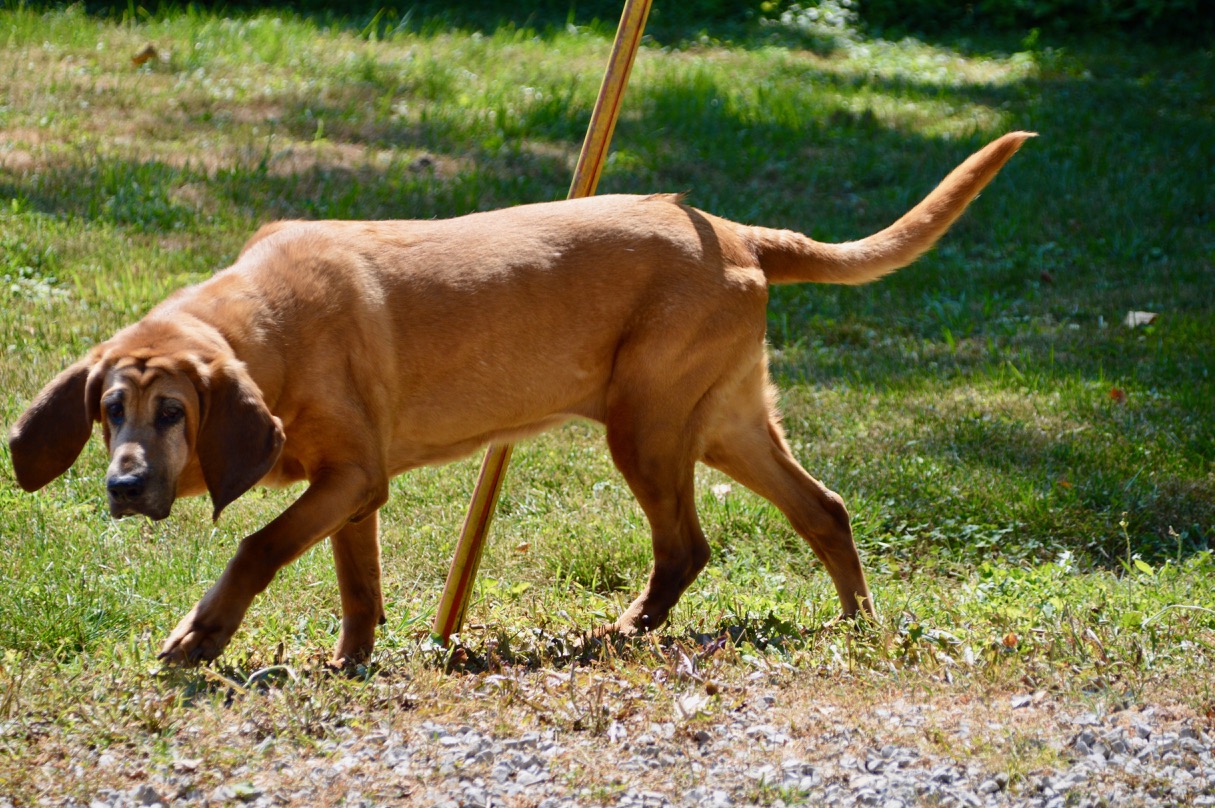 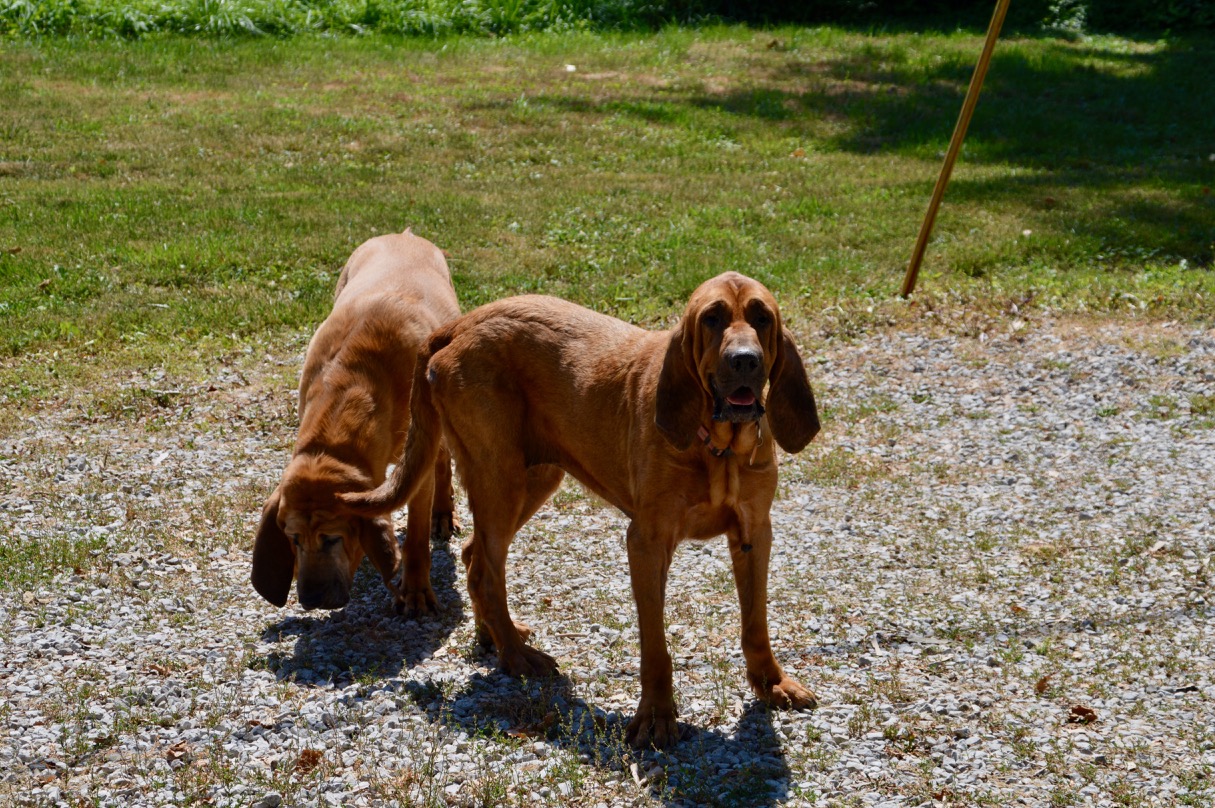 They both let me know ... I should head for the door and let them in. 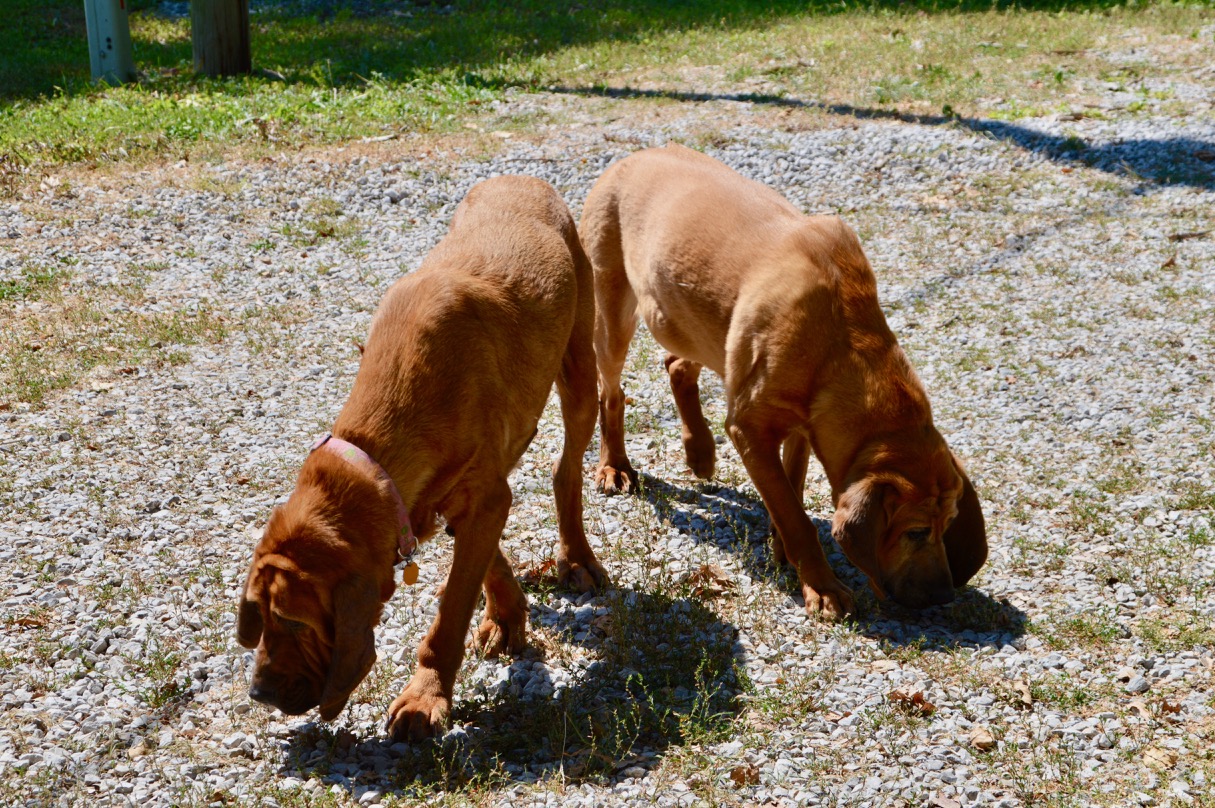 By early evening were were getting some sprinkles of much needed rain but the real storms were passing about 70 miles south of us.

I almost forgot to tell you I saw a first last night, ever ... I found a tick on one of Heidi's pads on her food. The tick had not been there long, was not swollen but had attached. My 'tickedoff" tool pulled everything out. I would not have caught it if she had not stretched out on the couch to sleep during the game I was watching.

I check all the hounds after every walk or when they go outside, behind and inside their ears, their necks and between their shoulder blades. Those are all favorite places of the ticks. It has not been too bad this year for the hounds ... but I average 4-5 on my after the afternoon walk.