All The Photos Have Been Fixed 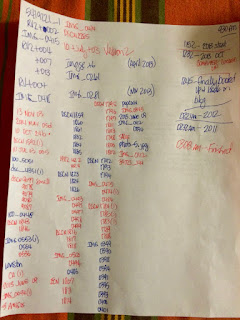 I didn't plan to do it all tonight but it's like anything else I start ... I get started and can't stop. The closer I get to finishing "pulls" me onward. So 5-1/2 hours later, it was finished. Actually it was good to do. I was able to resize all the new photos to the XL size I have been making most of my photos the past few months of the hounds.

It also had some good and bad parts in the process. I was able to see just how healthy Heidi looked only a year ago before she became so thin. I was also able to see how much weight Sadie has put on these past two years. Winston got grayer but still in great shape. Although recently I can tell his hearing is decreasing ... faster than I would hope.

I decided not to re-activate the old email only to have over 20,000 emails loading back into the account ... just to see if those photos on the blog would show up automatically. So on my 2nd monitor, I opened a different browser and went to my blog. I used that screen to scan through the blog looking for posts where the photos were missing.

Then I would write down the photo file name, which is what that paper is at the top of this blog post, export them from my Apple Photos program into my computer "pictures" file so Blogger can upload them. I used the 2nd monitor to put the photos in order plus added the original captions, if the photo had one.

It was funny ... as I uploaded all the photos of the Coachmen RV I bought in September 2013, I thought to myself I probably should have kept that RV and I would be on the road as I type this. Sure I could not have gotten off road like we did last summer but that was a nice RV and the inside was immaculate.

As I was uploading the photos of the major repair job for me, not being a mechanic ... I started thinking how happy I was that I sold it when I did. Add in the time where the rear inside tire went flat during the winter while sitting in the backyard ... I was certainly happy that I sold it.

I was also able to see how I drove some readers simply insane with my decisions changing at times within DAYS!!, going back and forth on what to do. I'm sure many of them have left this blog and no longer read it.

After glancing through all those older posts while posting the photos I did not feel the obsession to travel that I had back in 2011-2013. Even in the spring of 2014 I was raring to go with the Chevy 2500 HD 4x4 pickup ... only to trade it for the Toyota FJ a little over a month after I bought it. When I was loading those Chevy photos back into the blog I realized just how nice that pickup truck was. It's no wonder the car dealer that took the trade, sold that truck within 3 days.

I am happy though with what I have, the FJ. I am also content with where I am right now but I do know that traveling is in my future.

I have to log off and get some sleep before the hounds wake me up this morning to go outside. It feels like a Friday night but it isn't. It is 3:32am though ... so I am out of here.

A late night in "the tropics" but at least all the photos are back on the blog.
at October 29, 2015
Email ThisBlogThis!Share to TwitterShare to FacebookShare to Pinterest
Labels: Missing Photos, Traveling