The Hounds Are On Strike

I'm not sure what the problem is but these past couple of days all of the hounds have been very low energy. When they go outside they sit, they search but there hasn't been the sprinting around the field and playing.

Stella and Sadie will play a little inside but it's the type of play that is quiet wrestling. The interesting thing is each time I try to take photos of them inside, they stop playing. The next interesting thing is, inside Stella will be the one on the ground with Sadie standing over her ... outside it's just the opposite.

One thing that Stella has taught Sadie is to take time to relax. Before Stella showed up August 30, Sadie would rarely if at all, just lay in the yard and enjoy the sunshine. 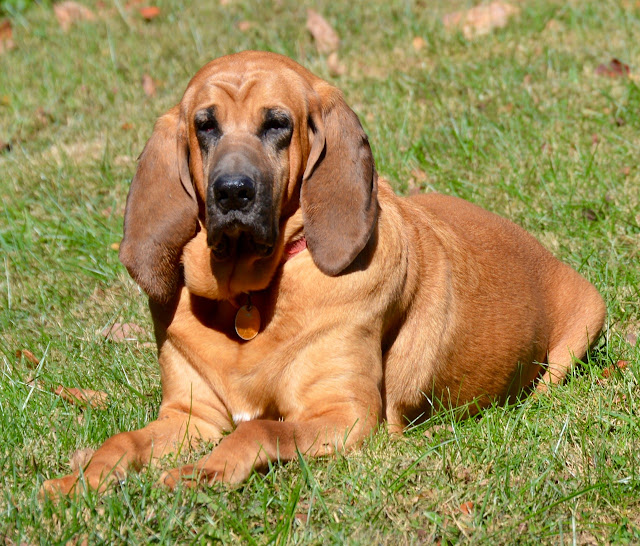 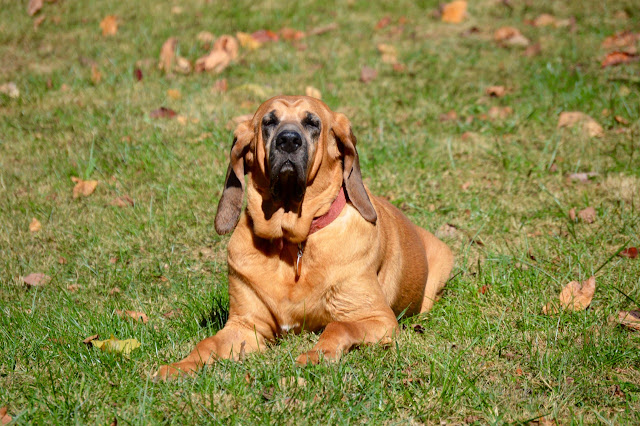 After letting the hounds outside Stella would just sit sniffing at the air but soon after lay down and sleep. Sadie and Winston would do their search and destroy mission in the field ... their way of destroying what they find is to eat it. I've given up trying to get them to stop, it's almost impossible with two stubborn hounds. 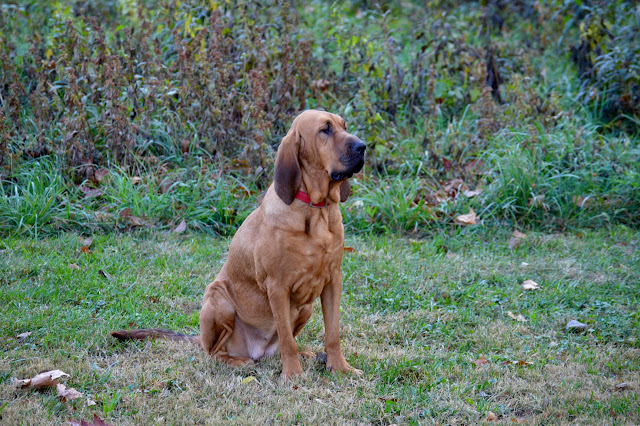 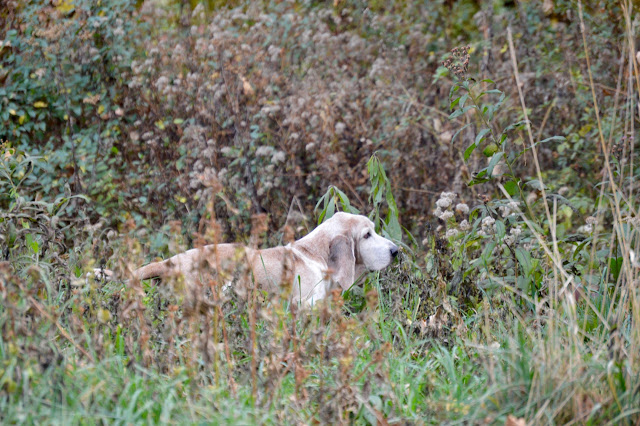 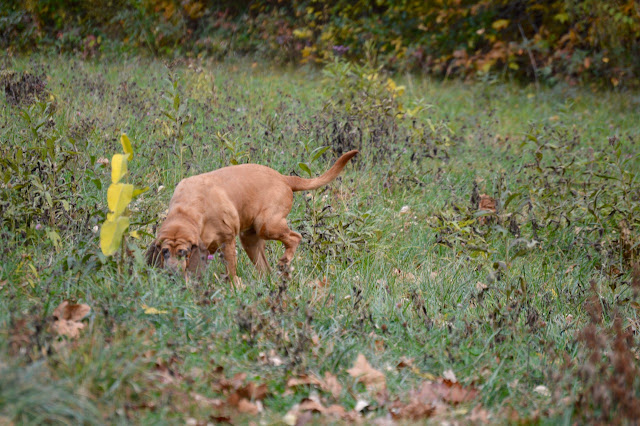 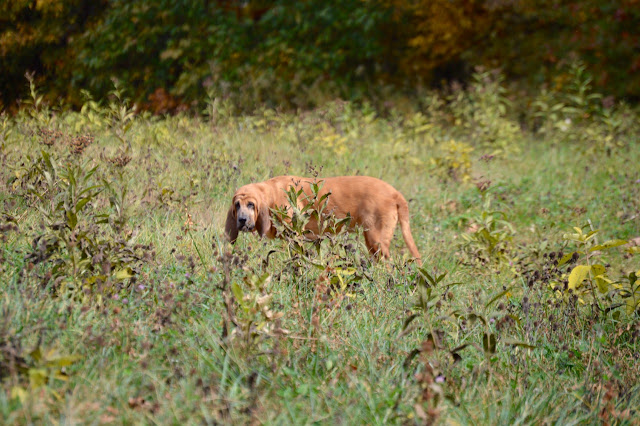 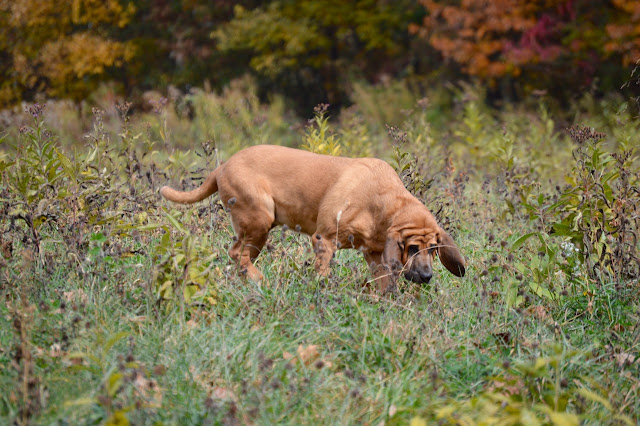 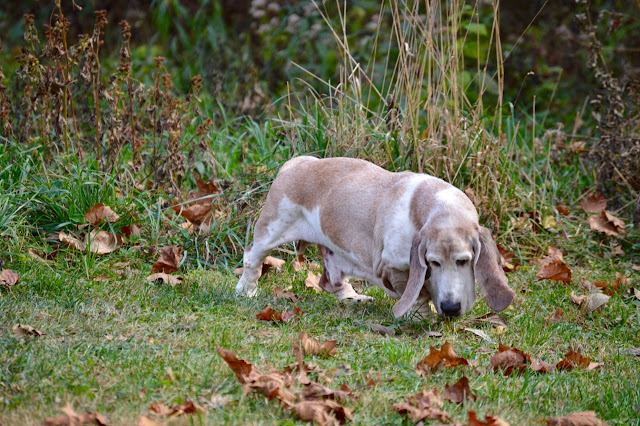 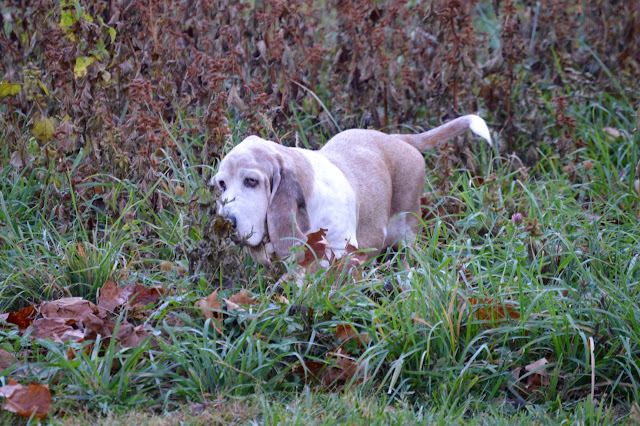 Stella has no interest in following along with them eating gross stuff so she would stare and watch them. She has more important things to do ... like a short afternoon nap in the breeze of a fall afternoon. 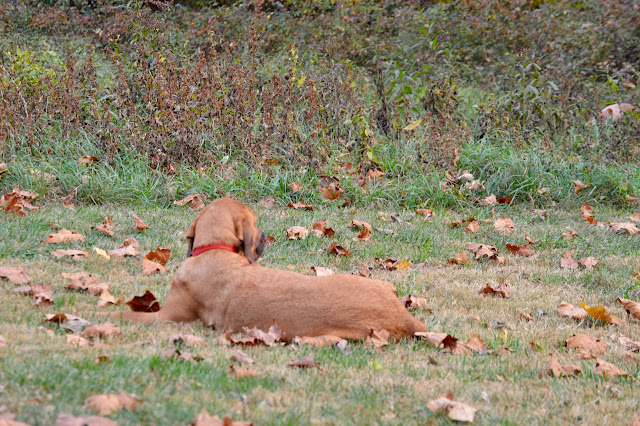 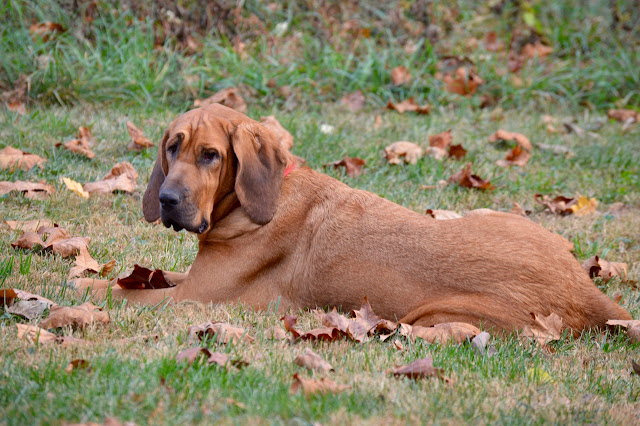 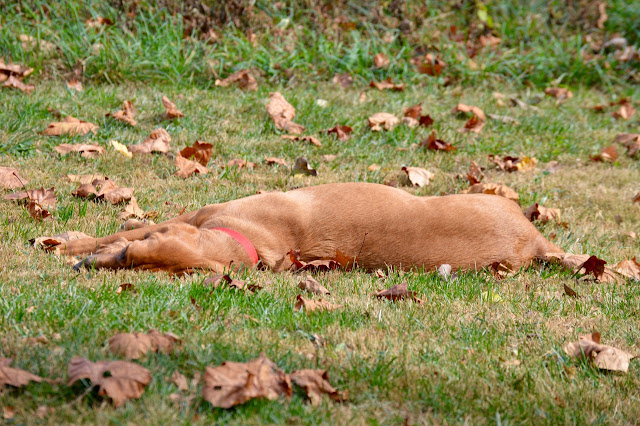 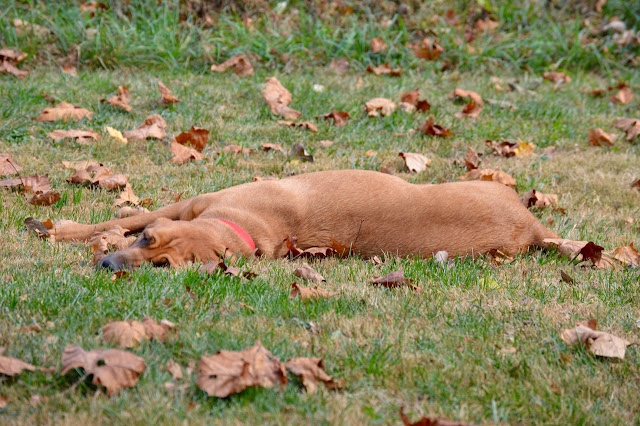 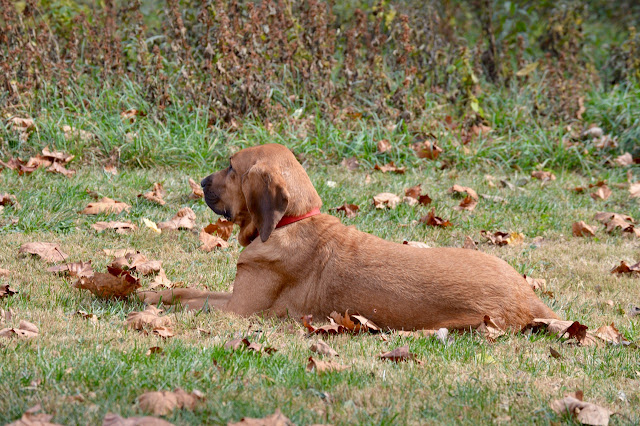 I may have spoke too soon on Heidi's skin stabilizing with the change back to a chicken and rice formula. Late Thursday night (after a week) her legs had been chewed on, some to the point of raw skin. The front paw that was full of hair, now had a hot spot from chewing. A lot of redness on her stomach, chest and neck.

Friday morning when she woke up, most of that was not red and looked like it had calmed a bit. By Friday night she was bright red on her legs, stomach, chest and neck. So we have gone back to the Earthborn Grain Free Meadow Feast blend.

These were taken around 12:30pm on Friday. The redness was much brighter later that night. The left front paw was almost full of hair before she started chewing and licking it, after the dog food switch from no grain. 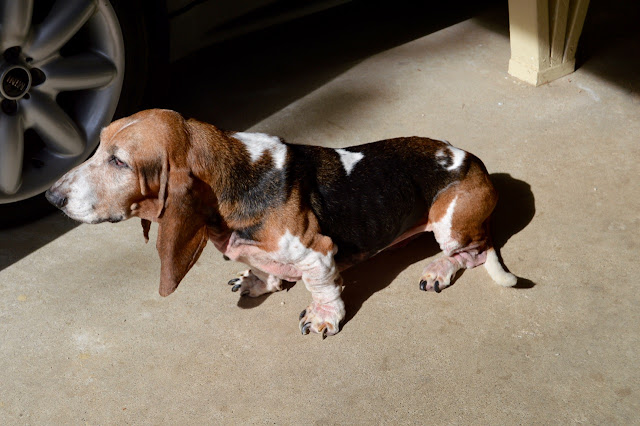 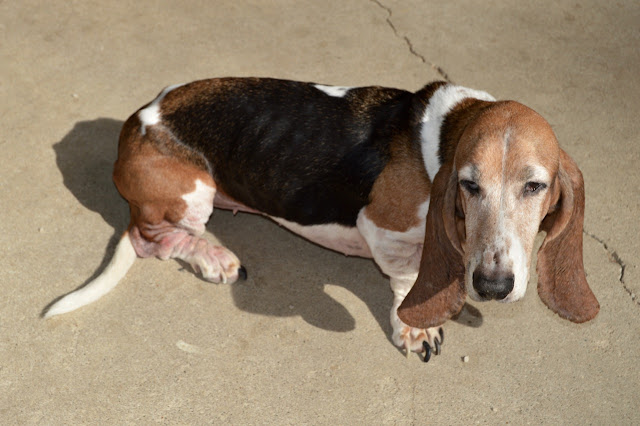 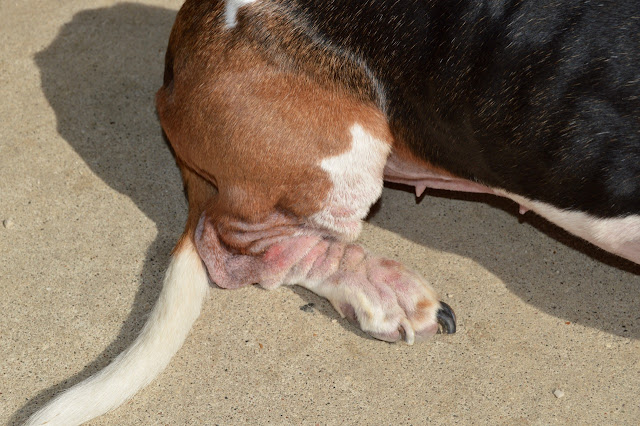 I still think we are getting close though where those light spots having hair fully grown back in these next few months. I believe the probiotic supplement is making a difference. It has not been 5 weeks yet, the recommended time before any changes would be noticed. I also see and feel a little more weight coming back.

It took longer than last year but the leaves finally brightened up a little. It was almost an overnight thing. Still not as bright as last year. 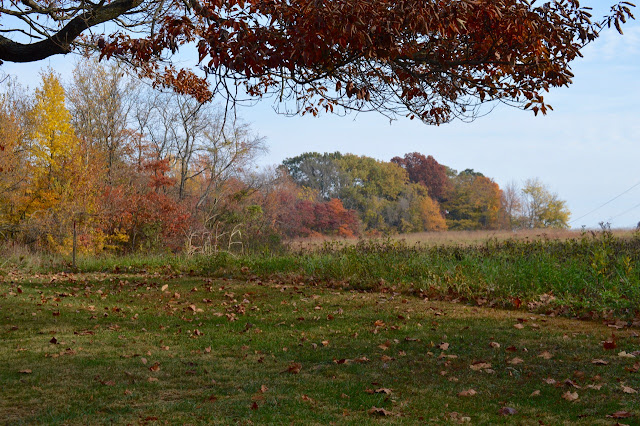 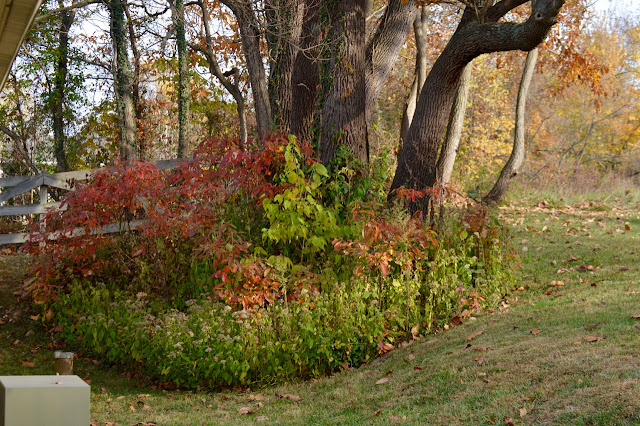 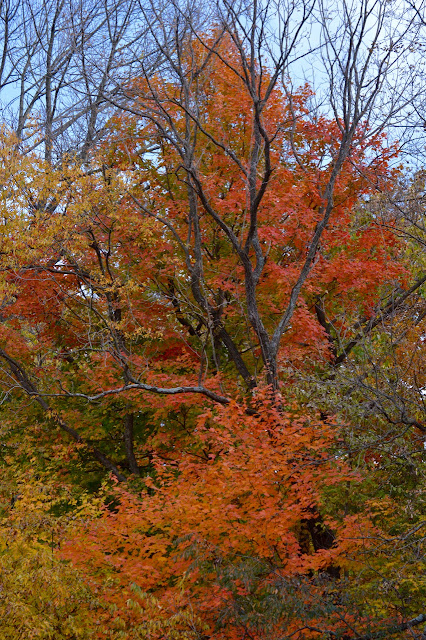 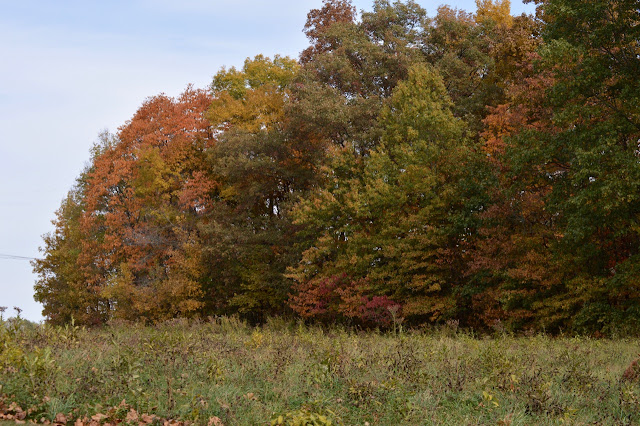 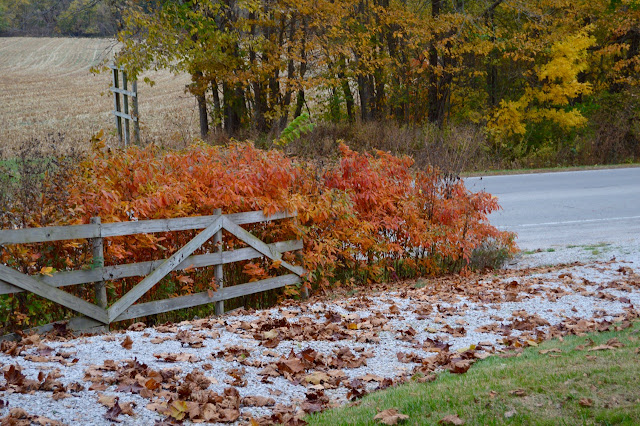 From the looks of things this morning, I could be raking a lot of leaves within the next couple of days here in "the tropics".
at October 24, 2015