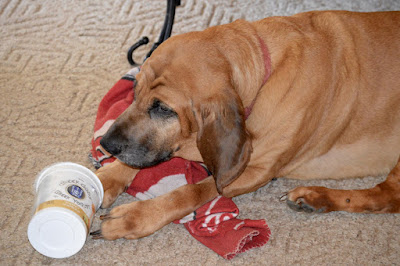 Some people may think "yogurt is yogurt" ... but in the 45 years I've been eating yogurt I've never thought that. Like all dairy products over the years the costs have climbed exponentially, even from last week ... yet when it comes to addictions, costs rarely matter. I had noticed this brand on the shelves many month's ago ... the price was much higher than I was going to pay for any kind of yogurt, so I would resist trying it.

I didn't have my current addiction at that time. So today after seeing a 40 cent increase over last week's price, I paid $4.98 for this container of yogurt you see between Sadie's paws. No, she doesn't get spoonfuls or even a spoonful but she does get to lick out what's left inside the container. She also likes to put her teeth marks on the container to let everyone know she's finished. There usually isn't much left but she will sit next to me drooling while she waits for me to finish the container. Maybe she is now addicted?

Ed Frey was mentioning this yogurt so many times on his blog that one day my curiosity got the best of me, so I sprang for the expensive yogurt and could not stop eating it. Months later I will not even consider any other kind of yogurt. I did a test with the yogurt I was eating before this, both are high in sugar content ... but my last yogurt does not taste nearly as good as it use to.

I am not even sure it's the taste that has hooked me. It does taste fantastic but it's also the texture that is nice. I am not sure I will take the next cost hike though, I have my limits. I cannot ever see myself paying over $5 for a container of yogurt. Even though, I do pay almost as much for a smaller container of Ben & Jerry's ice cream on occasion. Of course the yogurt and ice cream are NOT on my diet.

The hounds got some exercise in sprinting and playing before the college football games started at noon on Saturday. 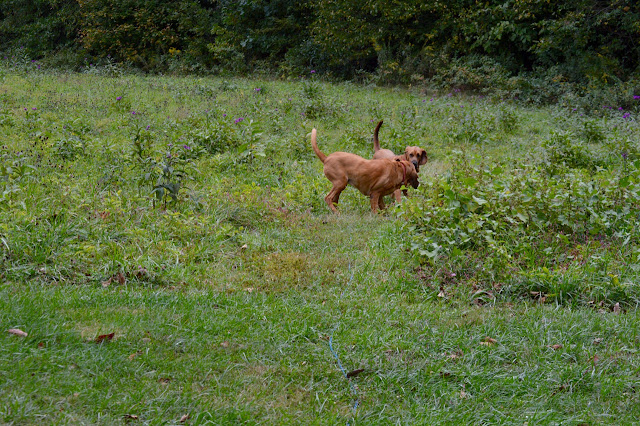 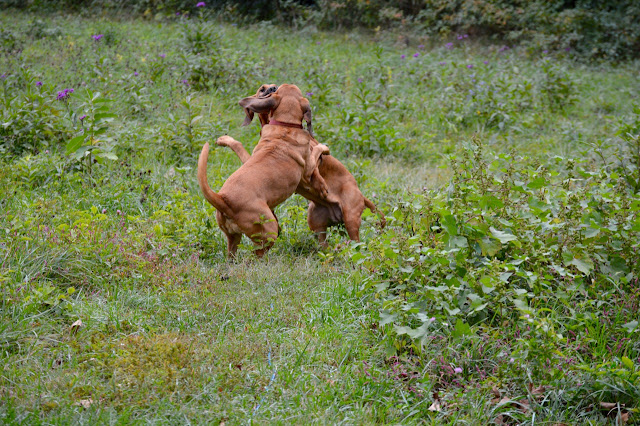 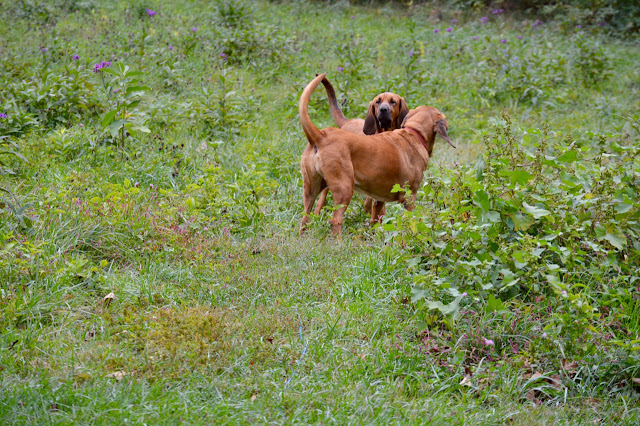 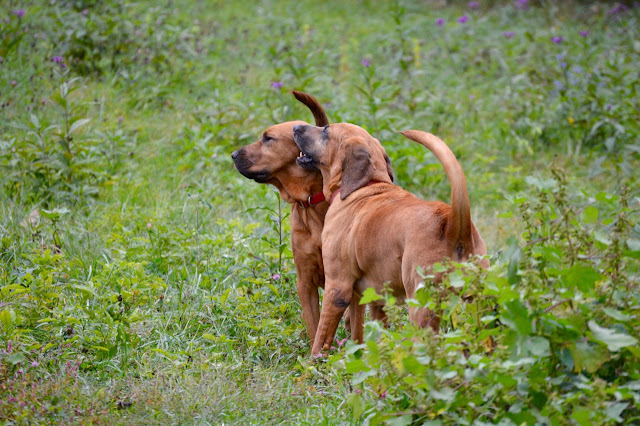 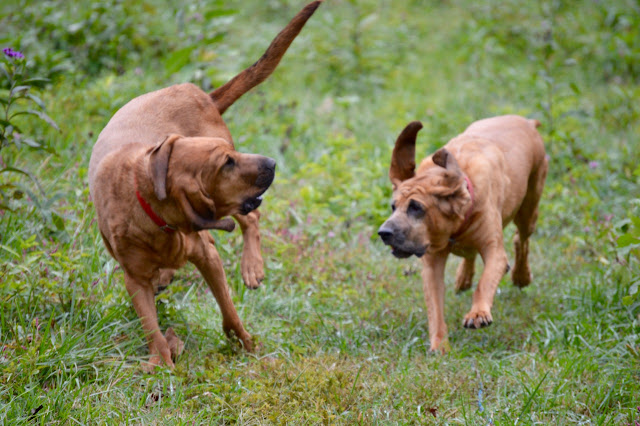 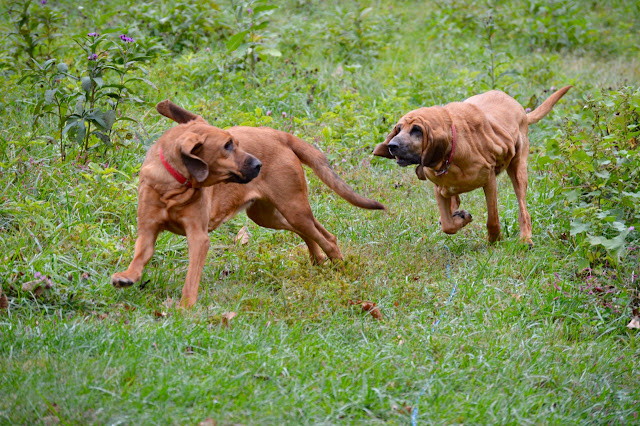 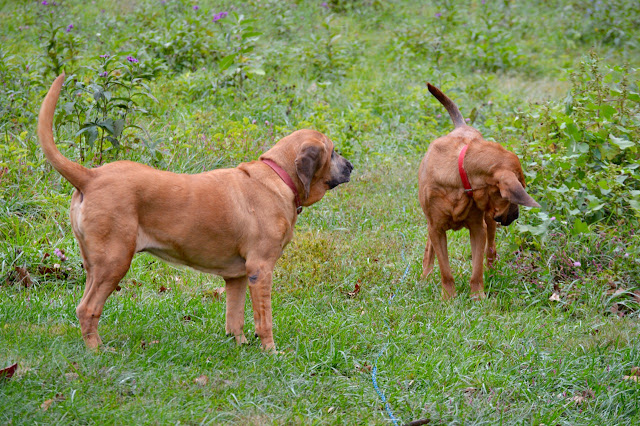 Winston and Heidi were not interested nor are they ever been interested in any kind of aerobic exercise. Heidi was missing during this time and I found her in a new spot she is trying out which is way outside the allowed limits. She refused to move when called ... all I need is another stubborn hound. 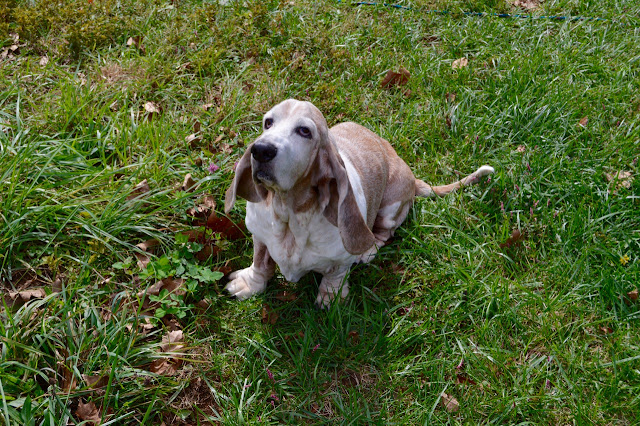 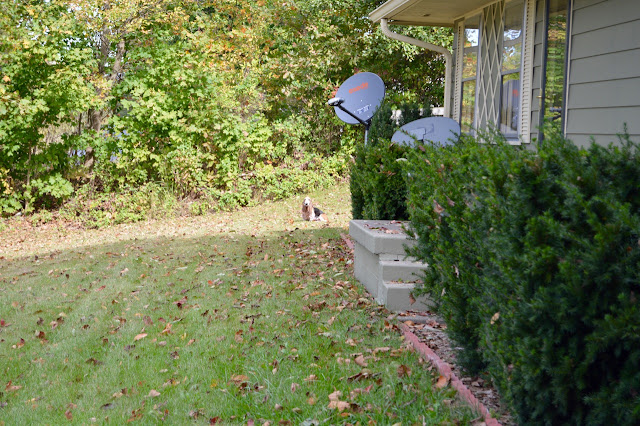 The hounds and I survived another long weekend of watching college football for 14 hours straight on Saturday and 2-3 different NFL games on Sunday. We did the daily walks at halftimes of the afternoon games. So while I watched the games, the hounds got their sleeping in and exercise. It got exciting though when Stella found out early Saturday evening that Winston had taken her spot on the couch, plus while she was up drinking water ... Sadie moved into the last spot on the couch and Heidi came out from the dark bedroom to take the chair that Sadie was sitting in.

Stella came back into the living room without a spot to sit except on the floor.

Stella stared for a short time processing what took place. She saw a space on the couch next to Winston not much bigger than her paw. Bloodhounds seem to think the the space 1"x1" can be expanded to fit them stretched out as long as they have a desire. Right after Stella put her paw in the 1"x1" space and had the look in her eyes that she was going to climb on the couch and sit on top of Winston ... I yelled 'no' and she migrated to her spot on the floor.

Hours later during the final game of the night, I made the mistake of leaving my spot on the couch for some water ... only to come back to the living room finding I no longer had a seat anywhere. Luckily the ottoman is large enough that I moved that over to where I could sit and see the game.

There wasn't a lot of photos taken this week. Saturday was cool, windy with a little rain ... Sunday was just lazy and today was shopping day for dog food and yogurt.

I was wrong in my writeup last Thursday or Friday when I stated the farmer got 4 trailers full of corn ... those same 4 trailers made numerous return trips to fill up and the number I saw were 16 trailers full as of this morning. I didn't see all of them. Not knowing anything about farming or crop production, that seems like a lot of corn produced for such a small field. 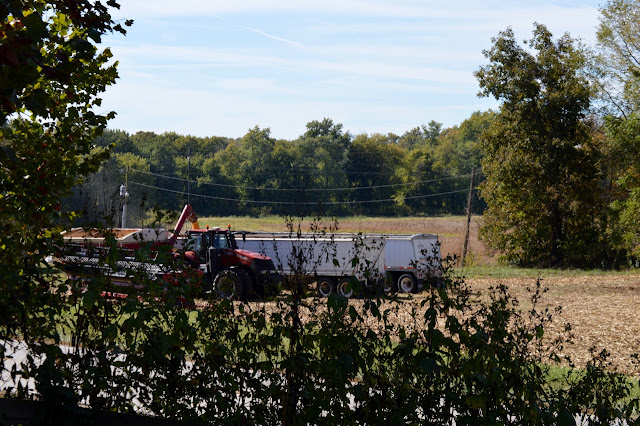 The hounds didn't do much today ... Stella and Sadie played again which is now their daily ritual ... while Winston found one of his favorite spots to lay in the sun and watch the traffic on the highway. He later laid down for a full nap but woke up when he heard me with my camera. 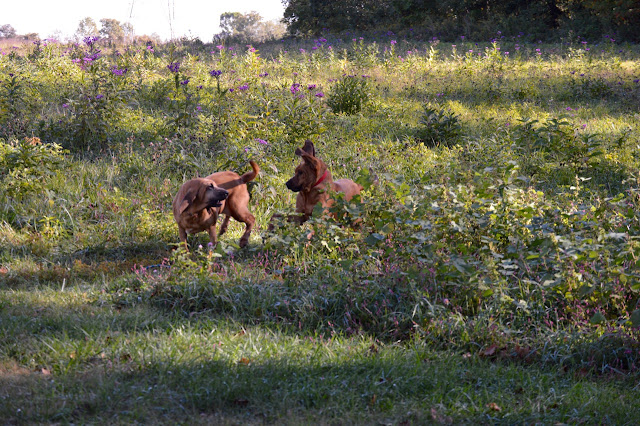 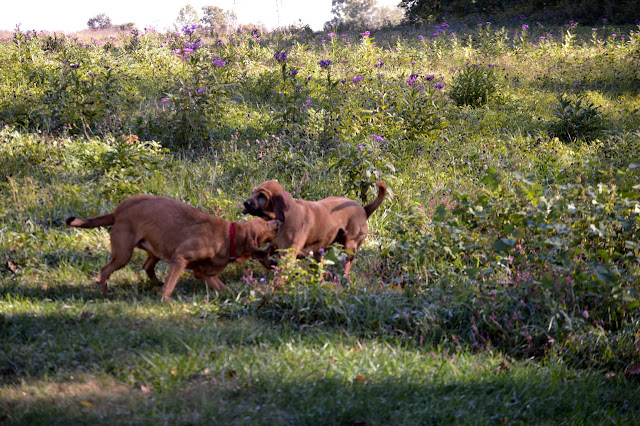 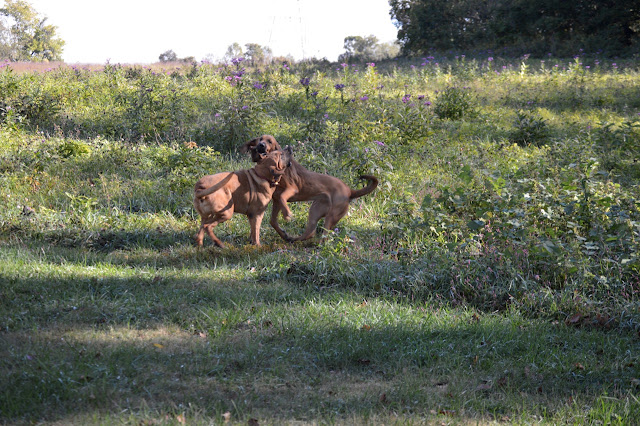 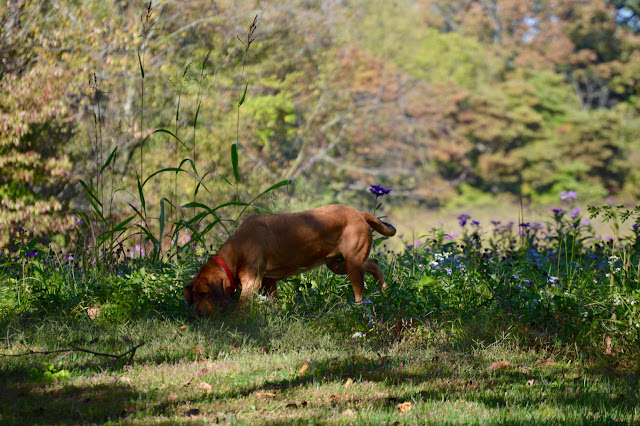 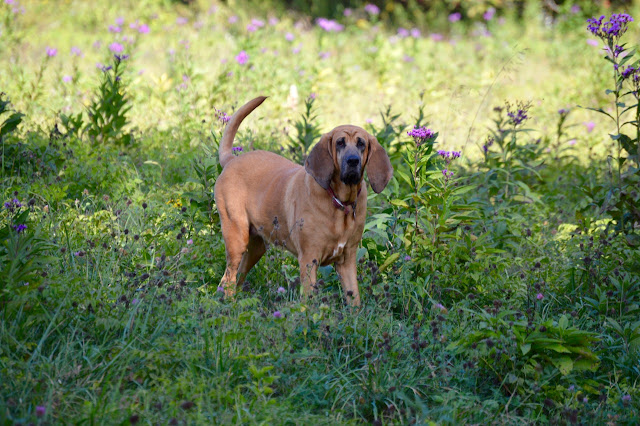 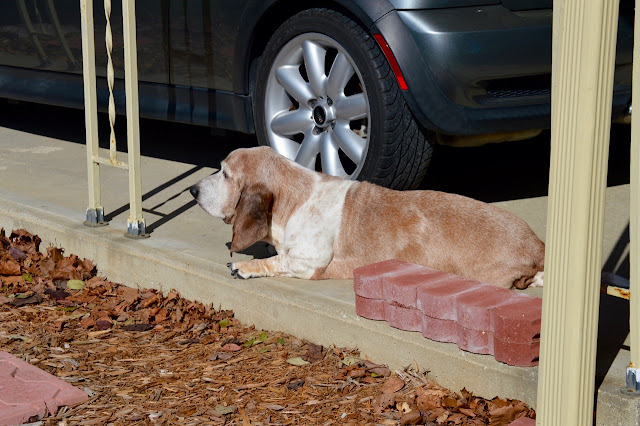 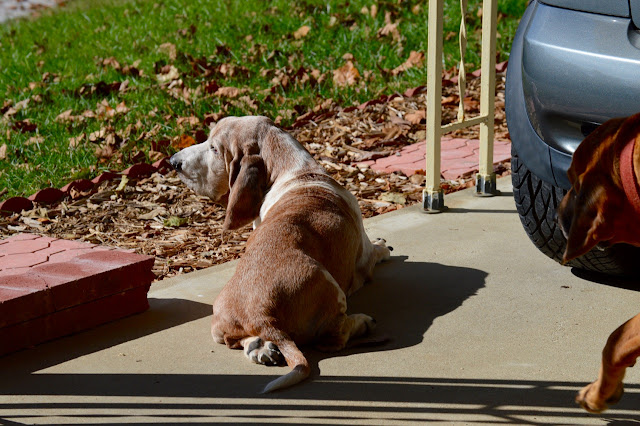 It has now been a few days using Apple's new OS El Capitan that I installed last week. I can tell the differences, even those behind the scenes and I like some of the new features. I am not one to jump on all the new features ... I still like backing up to my computer instead of 'the cloud' ... I like plugging my iPhone into my computer to download photos instead if using wifi for that same thing. There will be many features I will never use but they are there if I ever decide to. I'll have to give this OS update an above average rating ... it works well.

The major league baseball playoffs start tomorrow with their wild card game. Those games will carry me through he week nights and some week days between football games. There has always been something about baseball in the fall ... makes it seem like fall is here.

With the recent bag of dog food that Sadie, Stella and Winston eat ... they are consuming 1.833 pounds per day. I can see that Sadie is losing the weight she needed to lose. Winston is maintaining his slim waistline and Stella showed up in very good shape, not to heavy or lean .. just right. Yet all three hounds would eat non stop if I put the food out.

Heidi still eats her own Earthborn Holistic Grain Free food. Her 28# bag is lasting her 50 days. Even though she is communing .56 pounds of dry dog food per day ... she has not gain any of her weight back. In fact this morning and yesterday I could swear that she has lost weight. Yet she is happy, wags her tail, sprints through the house once per day ... and her skin rashes seem to be continuing to improve.

As usual things are pretty slow here in "the tropics" of southern Indiana if you are looking to read about exciting events.
at October 05, 2015
Email ThisBlogThis!Share to TwitterShare to FacebookShare to Pinterest
Labels: Bloodhounds Playing, College Football, Earthborn Holistic Dog Food, Farmers, The Greek God Yogurt