The hounds and I survived another fast paced weekend doing the norm. We went out different times during Sunday but there wasn't a lot of energy around so they didn't do much more than the photos show. Heidi remained inside most of the time and refused all requests to come outside to hang out or at least go for a walk. 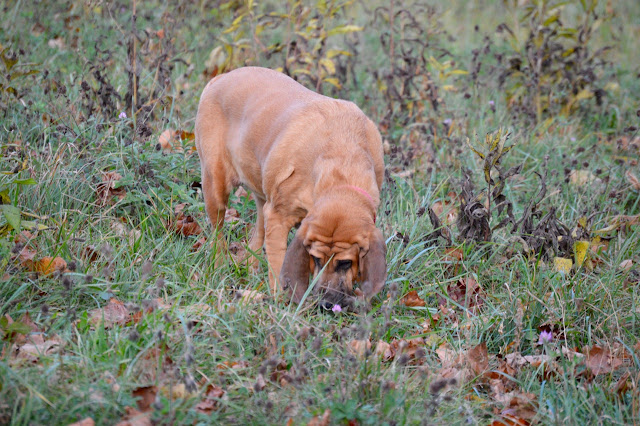 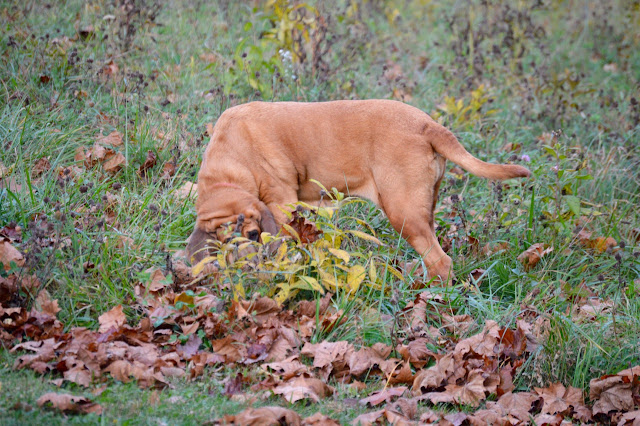 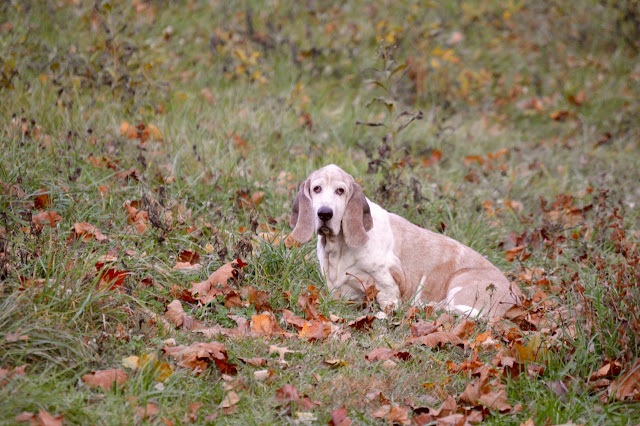 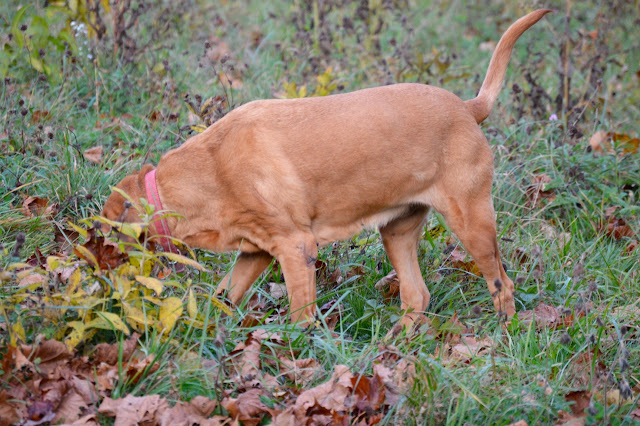 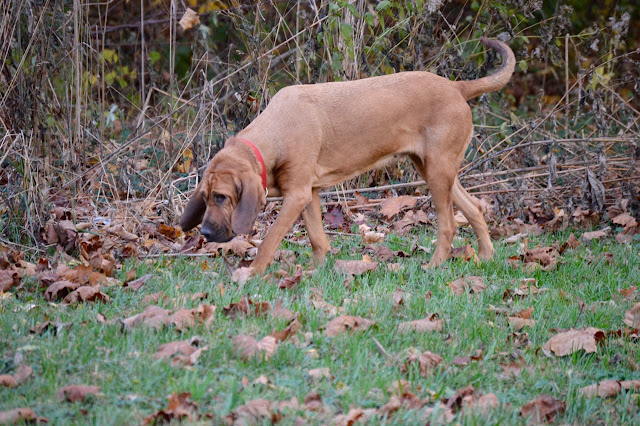 Of course as the pattern is, after the 1st cup of coffee Sadie is at my desk wanting to go outside every morning. I'll find out if its the coffee or the actual time that makes her do that, once we change time this weekend. After not showing a lot of energy lately Sadie and Stella were wrestling as soon as they went outside today but their play session didn't last long. 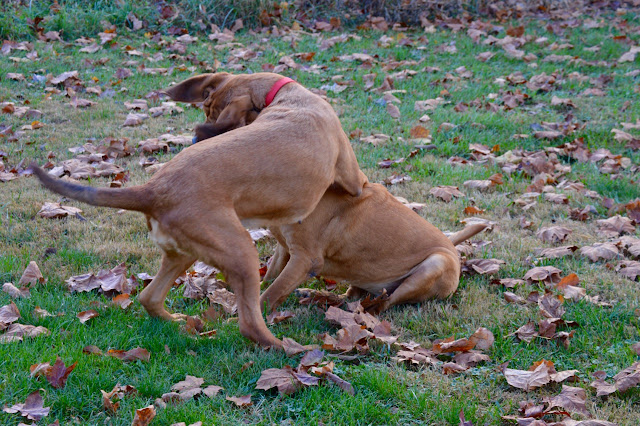 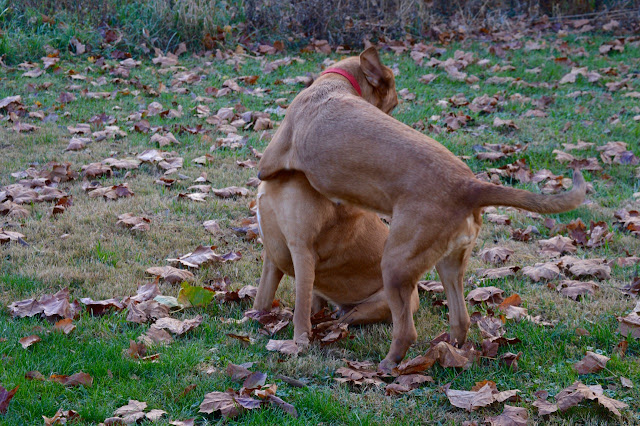 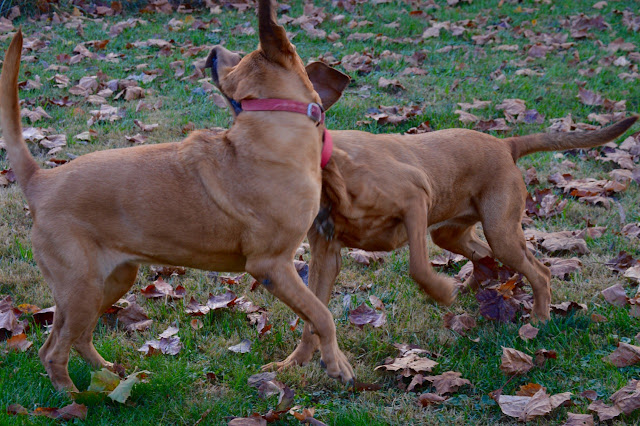 Winston got as far as the blocks and then decided he didn't know what he was going to do to start this week, so he turned and headed back to the house. THAT is very strange behavior by him. 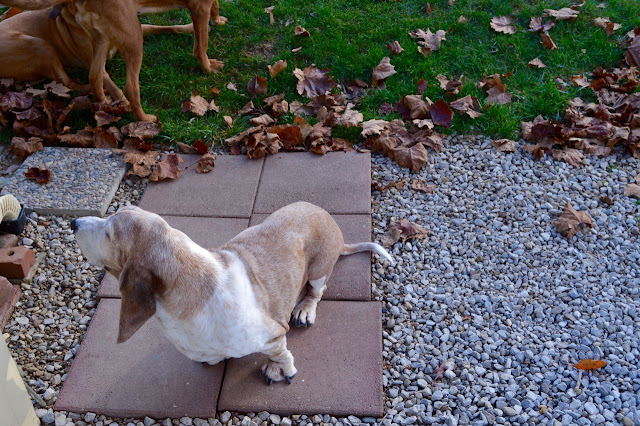 With the sun out, the temperature 57° with a slight breeze coming out of the north for once, I decided it was the day to "herd" some leaves. I wanted to do the backyard and for the first time the side yard on the north side of the house.  The front yard could be raked but this year there seems to be enough wind to blow them out of the yard, so I will wait a little longer before raking them.

After a short team meeting, the hounds decided I did not have to rake every leaf and it was okay if some were left behind in the raking process. With the breeze coming out of the north that meant the leaves were headed in the right direction for burning. 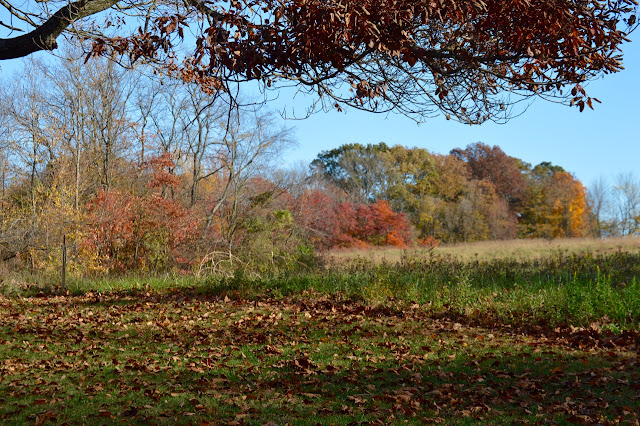 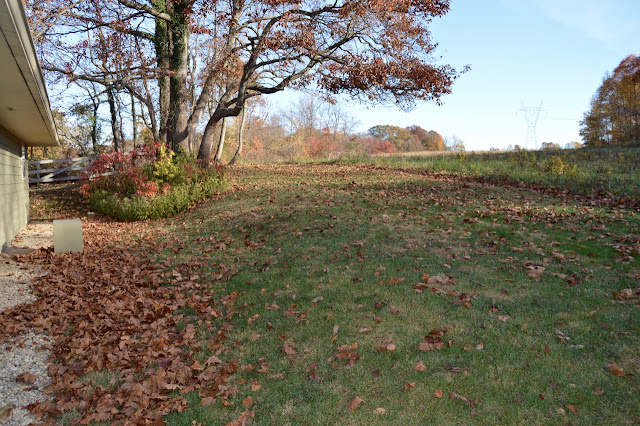 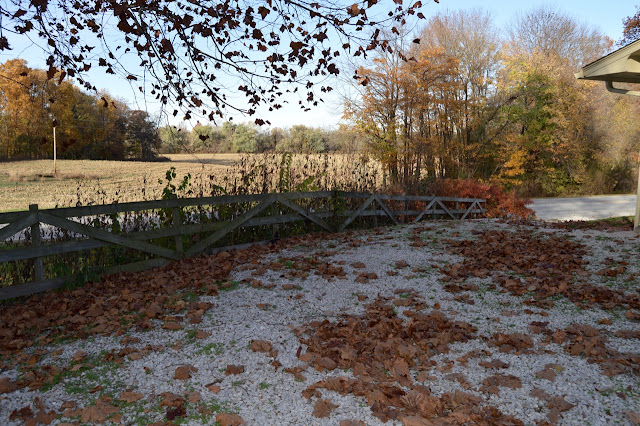 We also tried a different burn method. All of those leaves along the fence line were burned right where they lay. My hose was near by where I could put out any fire on the fence line and also stop the fire if it were to migrate down the bank and connect to the leaves in the neighbor's yard. The piles in the driveway were raked into one pile and lit.

I found a more efficient way to collect the leaves instead of loading them with two hands into my two large trash cans. I laid the cans on their sides, moving into the pile of leaves and my other hand pushing leaves into the trash can. Compressed them, the filled to the top to be carried away to the burn pile. That seem to work well in speeding up the process of collecting leaves. 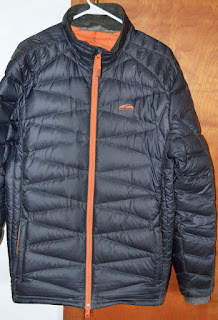 With the cool temps I pulled out a lightweight coat. The great surprise was after putting it on and zipping it up I could tell I had lost inches around my stomach and waist. Last year I could barely zip the coat and at times would have to inhale to get the zipper to go all the way up. This year after it was zipped I had extra room left. I'm glad I didn't sell it on eBay last year.

It might look warm but in cold weather the jacket is actually pretty worthless. It doesn't cut the wind, but for temps down to 50°it's a pretty nice jacket. Still, for winter wear ... worthless.


While I was herding the leaves, which took 1-1/2 hours to complete the backyard area, the hounds laid in the yard and watched. Sadie spent a lot of time snooping in the field. Stella once again laid in the sun and slept and would refuse to move when I was raking ... so I raked around her. She didn't even lift her head as my plastic rake touched one of her paws. Winston disappeared on me once. I found him sunbathing in the front yard that faces west ... taking an early nap.

I knew they would stay around because they had not been fed yet. They were wanting food more than companionship or helping with the leaves. So once the yard was raked, it was hound dinner time. After they ate all of them wanted to go out and inspect my job. Heidi continue to chase invisible flies around her and Stella was giving me the "thumbs up" signal for the clean yard. 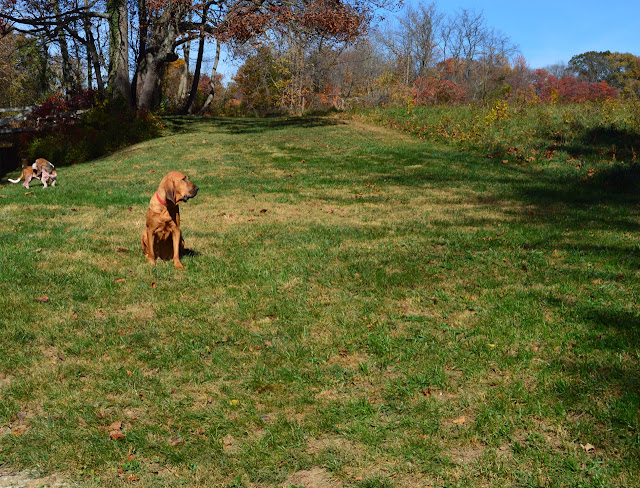 Later in the afternoon Stella and Sadie came to me to take them outside. The daily walk was done earlier. Yet, once they got outside they didn't do anything. Must of just needed some fresh air.  As far as using my leaf blower this year, I raked this year .. it's quieter. Plus my body is telling me right now that I got a lot of exercise in that 2 hours of raking. That's a good thing. I probably will only have to rake one more time based on the amount of leaves left on the trees. I'm hoping for some 15-20 mph winds. 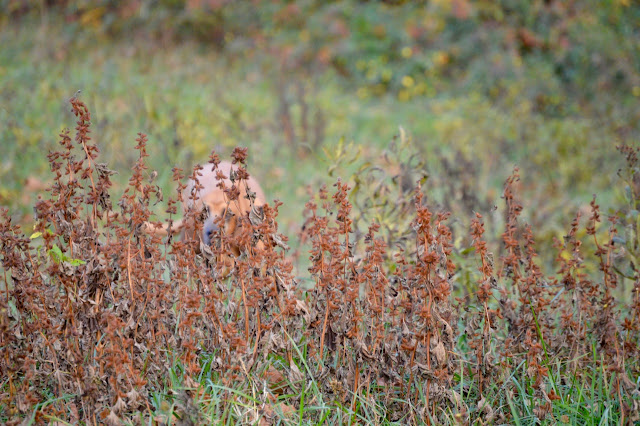 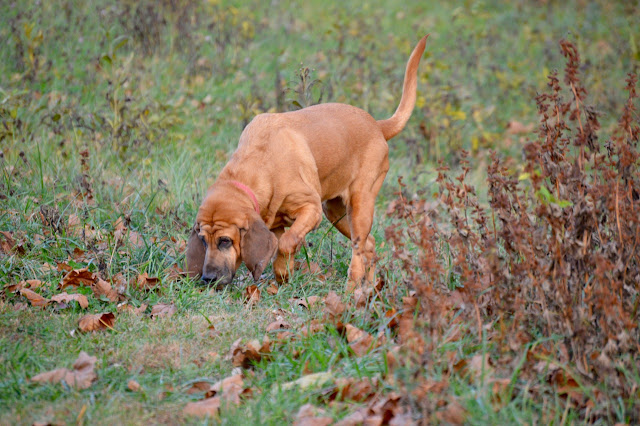 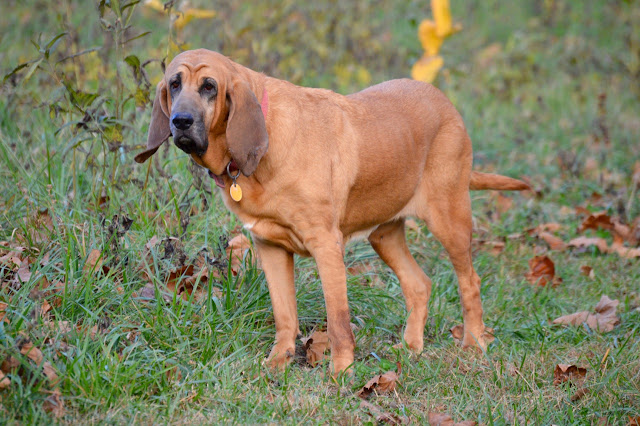 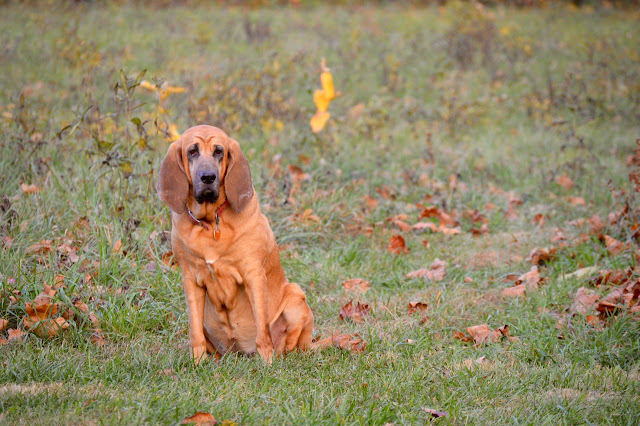 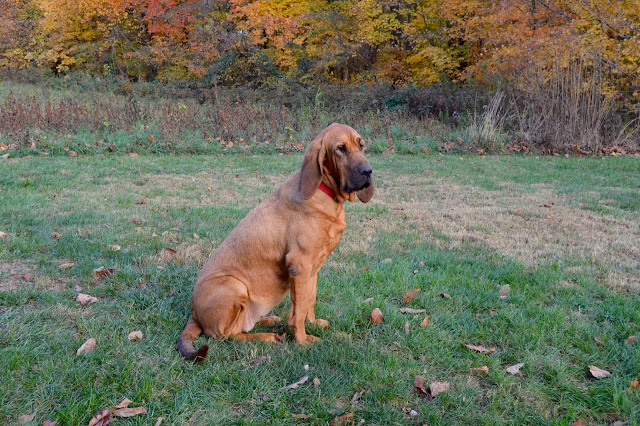 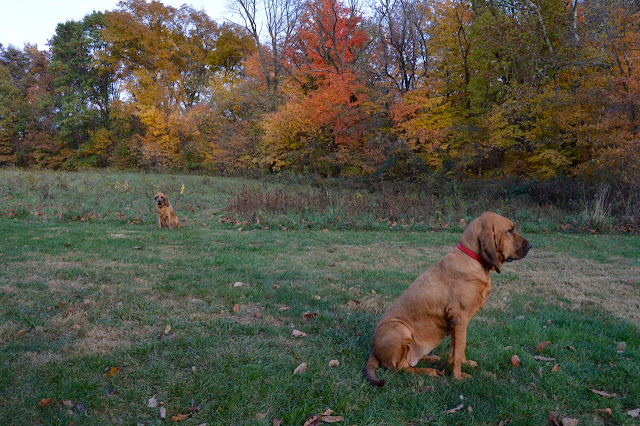 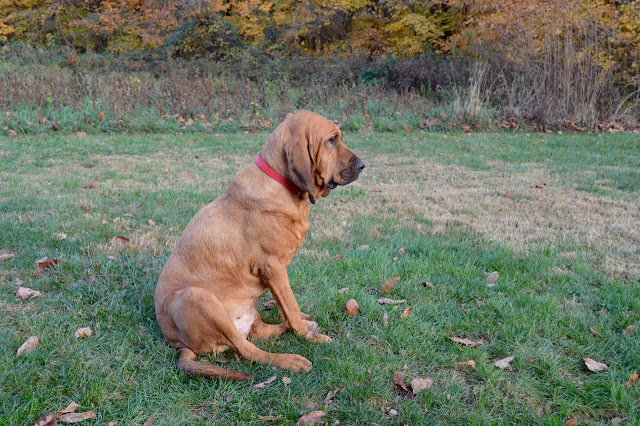 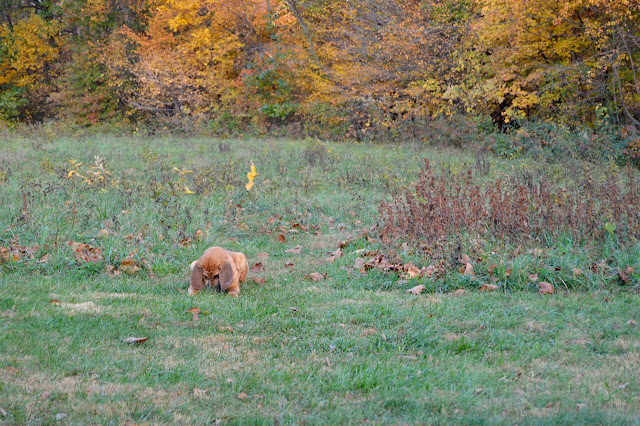 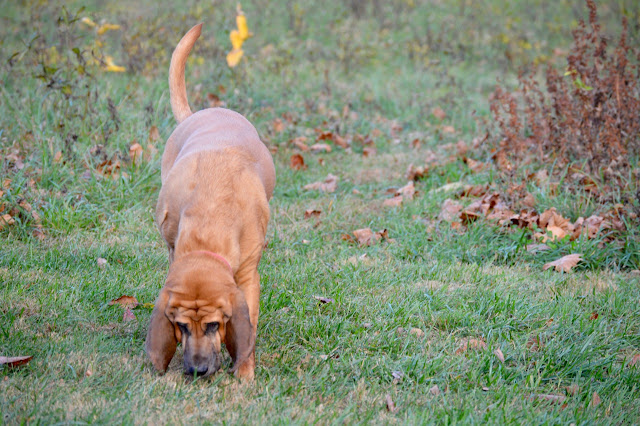 I would love to know what Stella was thinking in those pictures of her. Winston didn't want to join us, he was in a deep sleep on the couch, along with Heidi.

I enjoy the fast pace of retirement living here in "the tropics".
at October 26, 2015
Email ThisBlogThis!Share to TwitterShare to FacebookShare to Pinterest
Labels: Hounds Playing, Leaves, Sadie, Stella