It Took A Lot Of Hours But Finished 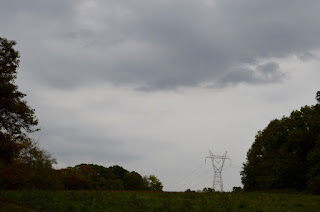 Anyway I found out just how much work and how many hours it takes to update things when you make the decision to change your home email address ... an address that you have used for a lot of years. I almost changed it in April 2014 when I retired, kind of a 'fresh start' kind of thing. I then realized by looking at my list of passwords and all of the different emails I receive daily because they have that email address ... that in April 2014, I decided not to change it.

For some reason this year, that email address was sold obviously by some website(s) where I had used it. The amount of junk mail coming to that account was amazing and never stopped. I did all I could to block them. I had a pretty good idea of the cause just based on the increase in junk mail after I would list something to sell on Craig's List or the times I would sign up for a new newsletter from someone. I'm not positive it is the reason, but it was a fact that junk mail increased tenfold during the times I had things for sale on Craig's List..

The junk mail seemed to happen more and more, even with the business websites where I had used the address. So I decided last night I'd start the long process of changing everywhere that old email address had been used and then delete the account.

Honestly, it took me almost 7-8 hours of solid work to get those updates done, including rechecking those sites where changes were made to make sure I could enter them again with the new email address. I also wanted to make really sure that I received email notices from my banks, credit cards, internet company, cell phone company, and electric company if nothing else.

Who knows, just by doing that I may start receive a new batch of junk email ... hope not.

So I'll not keep boring you with the details ... but just to let you know, if you ever decide to or have to change your home email address it is very time consuming to update before you pull the plug on the old account.

The hounds did their normal daily stuff inside ... a lot of sleep, the bloodhounds played, shared bones, found a new bone that was hidden somewhere and all were very interested in the lunch I fixed ... even Heidi.

For the first time Stella "whined" to me about the time I normally put their food out. I guess she has decided to start acting more like a bloodhound and has adjusted to the move.

Here are some photos from today ... while I'm off to find some older photos to post that you haven't seen yet.

Early this morning Stella didn't even want to go out into the field to snoop around. She sat there and stared at me the whole time we were outside this morning. 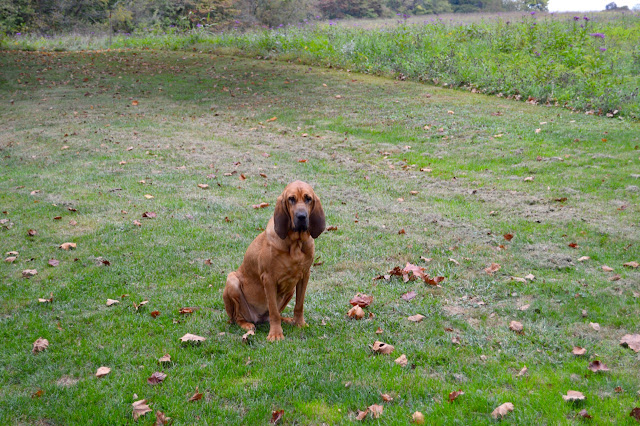 Winston did his normal early morning search for any yard moles that he never tries to catch but seems to smell a lot around the yard. 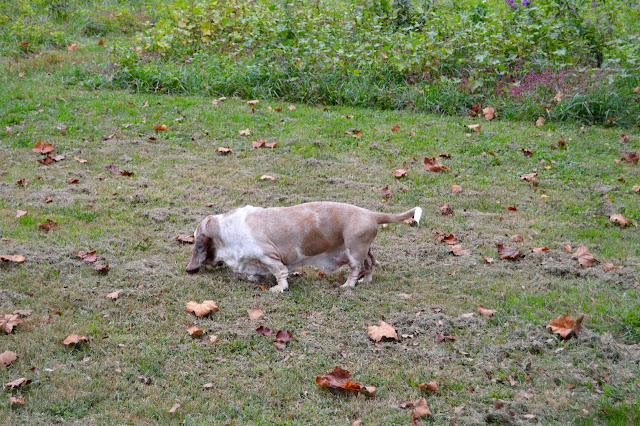 Sadie decided she was going to do her normal morning routine and it didn't matter if Stella came with her or not. She didn't go too far and was back in the yard looking bored. So we all went back inside and I went back to the computer. 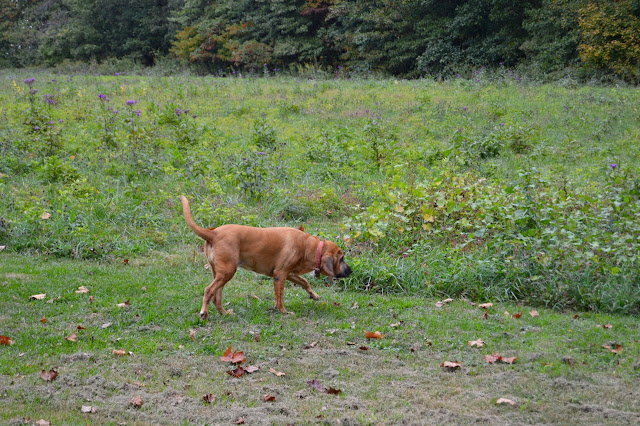 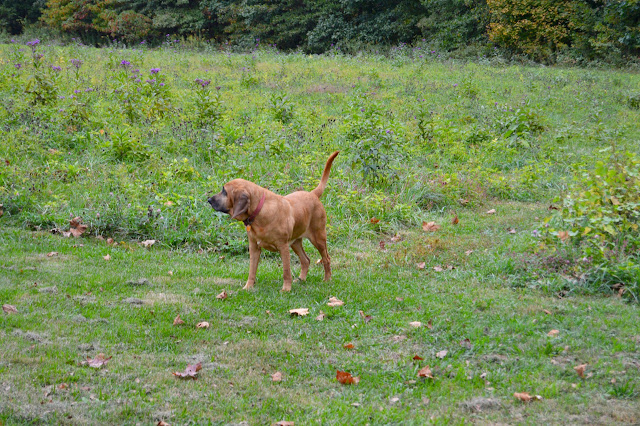 I lost the first two years of photos for Sadie due to my own mistake, thinking I had my hard drive backed up. I am not sure how old Sadie was in this first photo but she was letting me know that chair was hers. 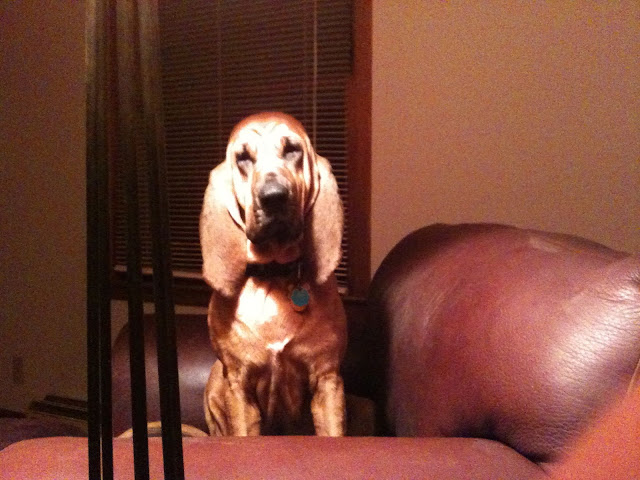 She has always been able to sleep anywhere but usually preferred no blanket of any kind. She is about 3 years old in this photo. 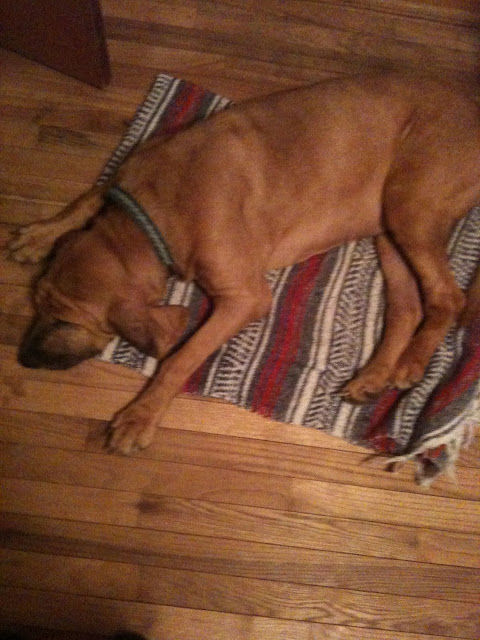 This is Heidi after we had spent all day driving down to Arkansas to pick up the Lil Snoozy Trailer before I changed my mind in the middle of the night. She really liked that grass lot but it wasn't a few minutes later she snuck off out of sight and a feeling of panic made me forget about the 98° and humid evening. 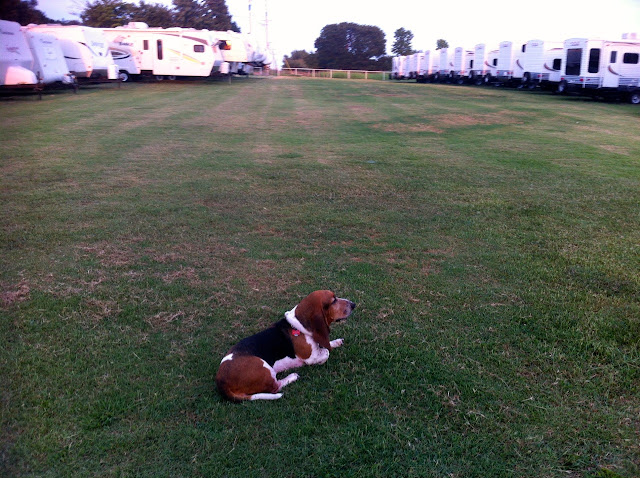 When I brought Winston home at 8 weeks old in 2004, he wasn't much bigger than a bottle of Pepsi. 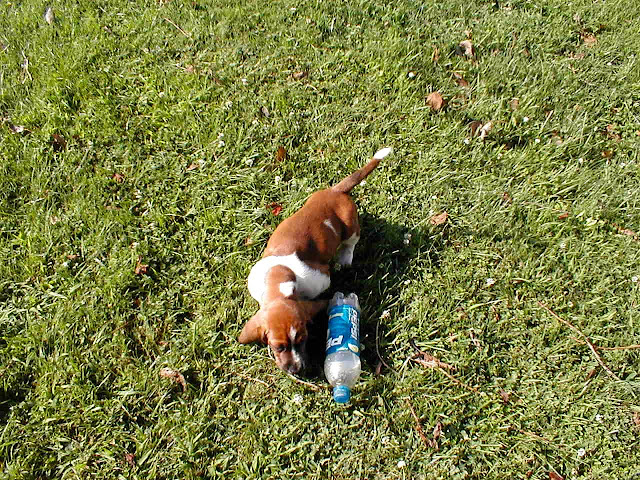 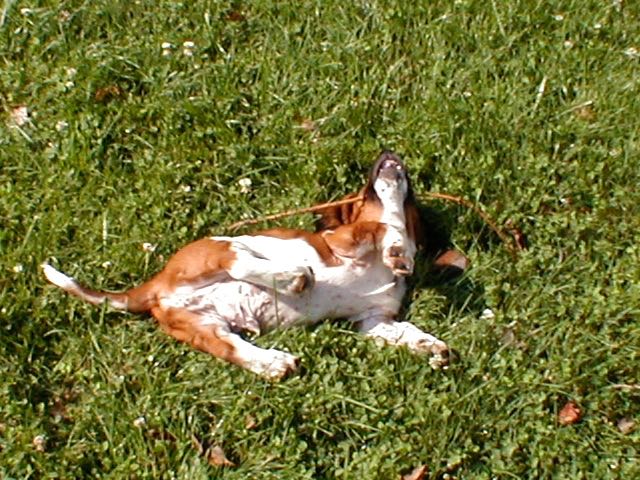 Stella's previous owner use to dress her in a polo shirt and take her to work on Fridays. I could tell by these photos she was a laidback bloodhound. That last photo is Stella's first night here, probably really confused and shy ... it didn't take her many days to move from that spot on the floor to the couch every night. 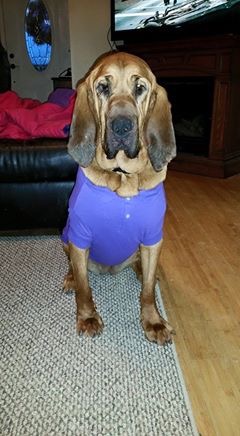 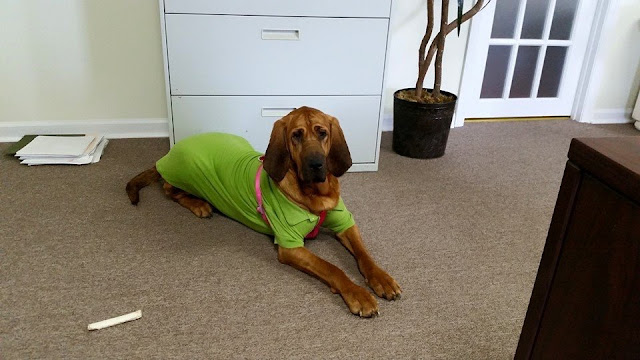 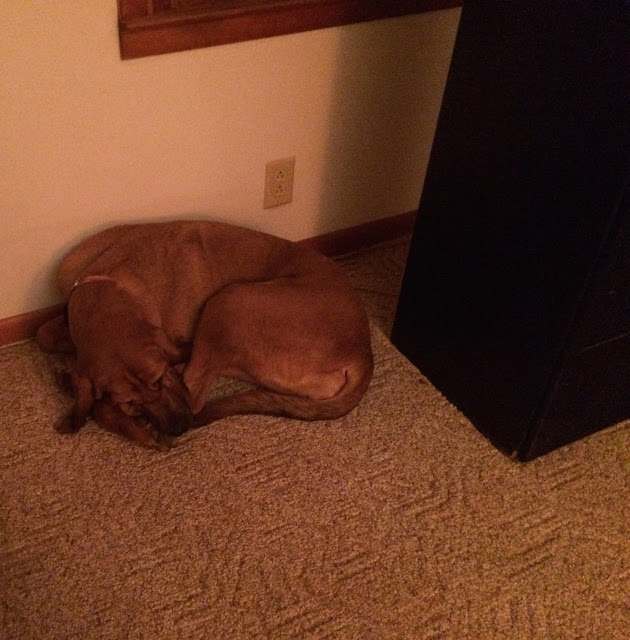 I have a college football game to watch tonight, with my Dawgs playing down in smoggy Los Angeles starting about an hour after the Indianapolis Colts kick off for their game in Houston. That means one game will be taped on the DVR but will be looked at during the commercials of the other game. Thankfully MLB has the night off. I always say I need a few more tv's mounted on the wall.
Overcast in 'the tropics' this morning but it never rained ... then the sun popped out for another great day of retirement.
at October 08, 2015
Email ThisBlogThis!Share to TwitterShare to FacebookShare to Pinterest
Labels: Dull Day