The Hounds Were Sunbathing Today 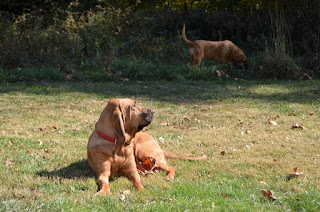 I was able to get the lawn mowed before noon on Wednesday. I probably mulched more leaves with the mower than cut grass, but at least all the grass is the same length now. It was such a nice day I grabbed a book and told the hounds we were  heading outside. They had just finished their meal and it didn't take them long to find the sunshine, find their spot and start napping.

Except the one that has the nose that works all the time ... so Sadie searched and searched and ate stuff. Heidi came out just long enough to dump her tanks and SPRINTED back to the door to go inside. For some reason she was not staying outside today ... so no photos of her. But she did lay in the sun that came through the living room windows and slept there in the sun all afternoon. 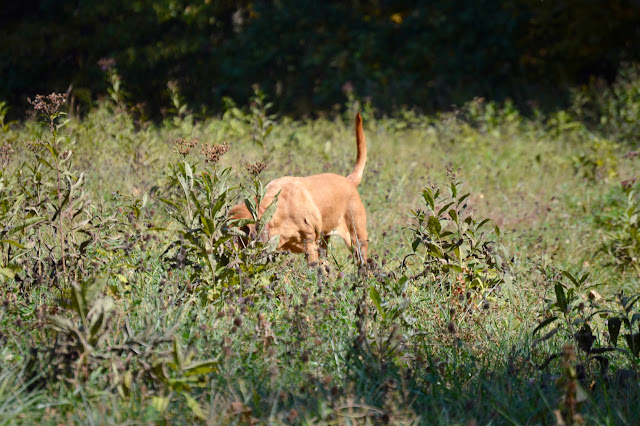 Sadie always looks up to see if I am watching her ... then will ignore my look and will start eating some of the grossest stuff the field has to offer. I've stopped trying to get her to stop and have decided she is a hound and some hounds eat anything they find and have for generations. Hopefully the other hounds will not pick up her habit. 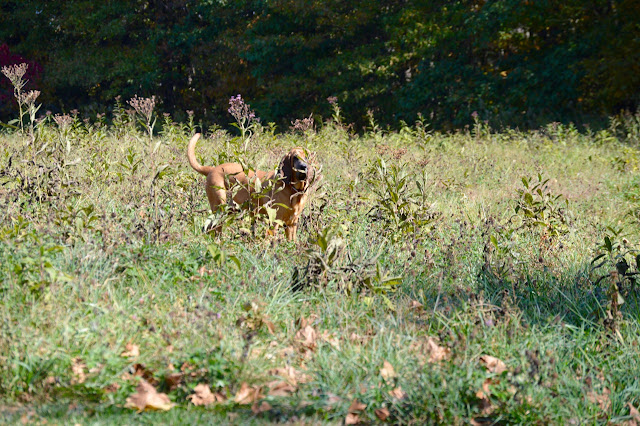 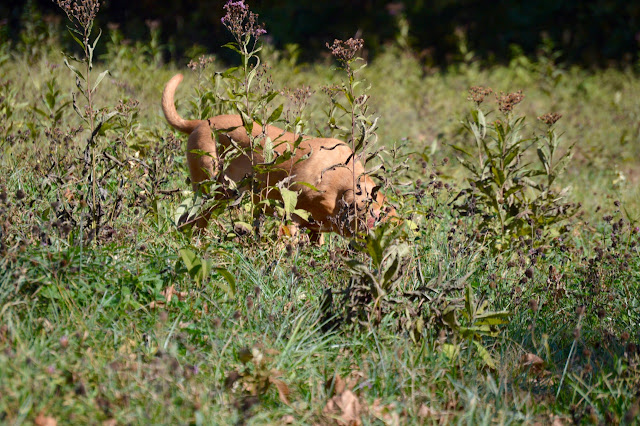 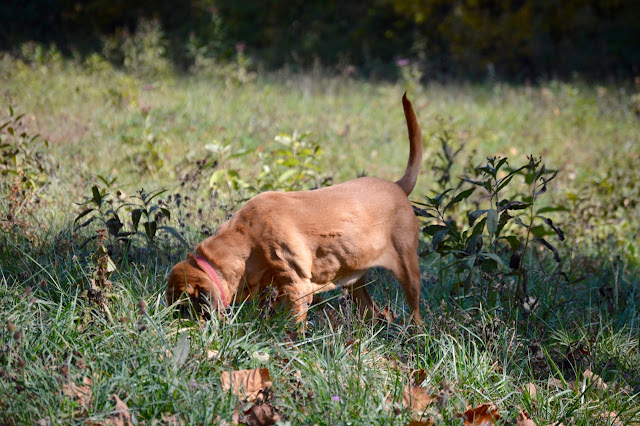 Sadie eventually came back to the yard and actually laid down but it wasn't long before she was back up with her nose to the ground. It was some great weather. I read a lot, Stella and Winston slept a lot. I pictured sitting like this at a camp site and had no doubt the hounds would be doing the same thing as they were now, but would be trading green grass for sand or dirt to lay in. I think Stella will be a pretty good camper. 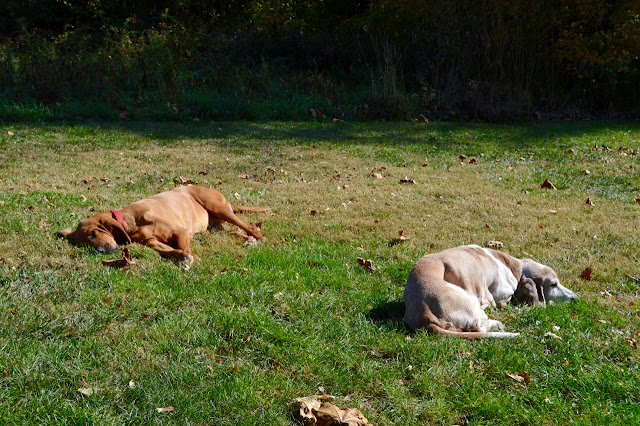 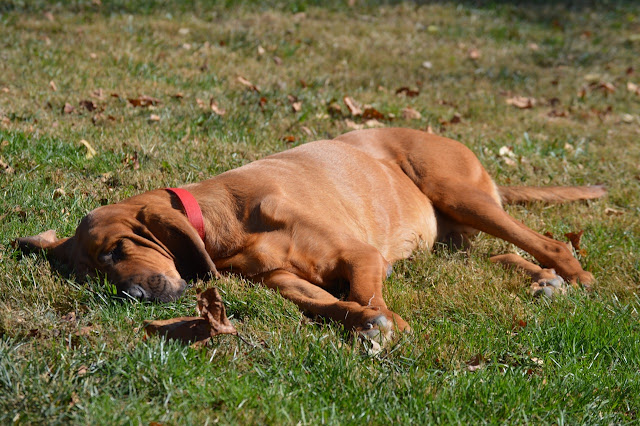 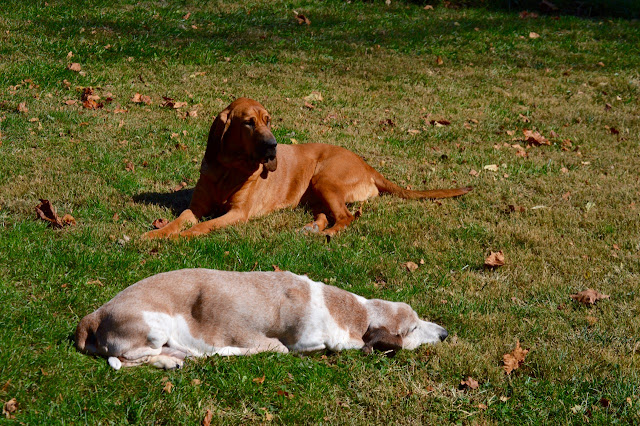 Maybe some readers can give me some ideas on what Sadie is doing. What started to be an occasional thing has now turned into an obsession with her. While she was laying down in the yard today she was chewing and pulling mouthfuls of green grass out of the yard and eating it, roots, dirt and all. Once the grass was gone then she would eat the dirt while digging a small hole with her teeth. At times to get the grass out, she was working so hard to get her back teeth at the right angle, almost like chewing on a bone.

I know when dogs go into a field and chew tall green grass some say its because they just like to eat grass, some say it's to help with their indigestion ... but in this case she and Winston are eating the dirt that is pushed up from the ground by the yard moles.

Bizarre behavior to me.

At least when I yelled her name when we were going inside, she did came running instead of ignoring me ... then headed straight to her water bowl ... lol 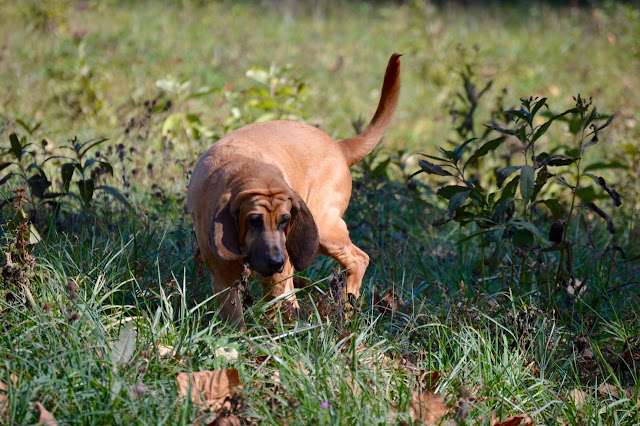 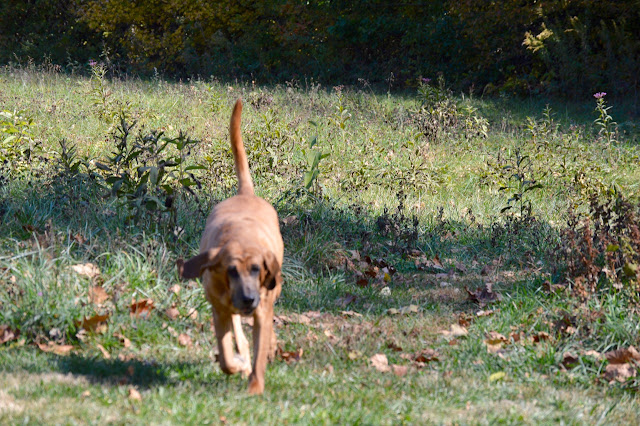 It was a beautiful day in "the tropics" of southern Indiana.
at October 22, 2015
Email ThisBlogThis!Share to TwitterShare to FacebookShare to Pinterest
Labels: Grass Eating, Hounds