While sitting at the computer Saturday afternoon putting the last blog post together about Heidi, I heard sounds of a tractor slowing down out in front of the house. He knew the weather report as well as I did and was going to put on some anhydrous before it rained Saturday night. 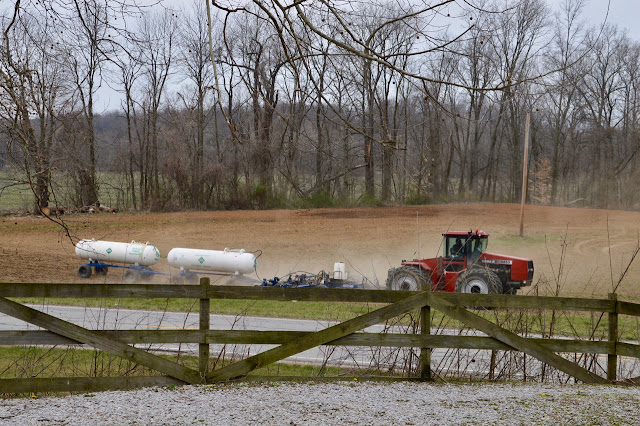 It was perfect timing because by Saturday night was starting to rain and based on the looks of the carport floor this morning it had rained for most of the night. That mixture of ammonia and nitrogen is shot underground by the rakes being towed by the tractor. 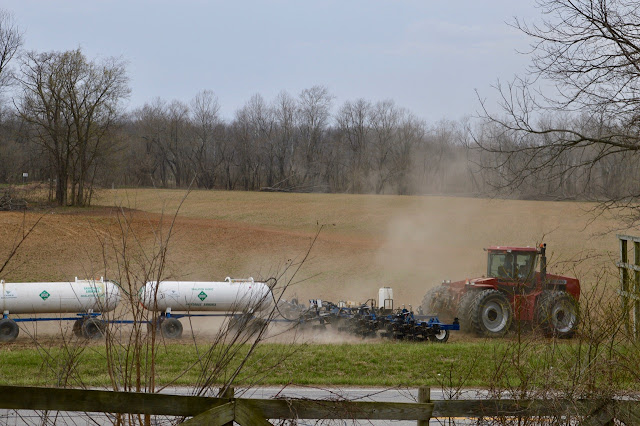 So in the last two to three days they have spread fertilizer and then the mixture of ammonia/nitrogen before the rains came. I have not seen them put both on their field within days before.

When ever I see tanks of anhydrous I think of two stories. In the last decade but not so much in recent years, these anhydrous tanks were being stolen for meth production. It was so bad at the time they started parking empty police cars near them if the farmers were leaving them unattended over night. 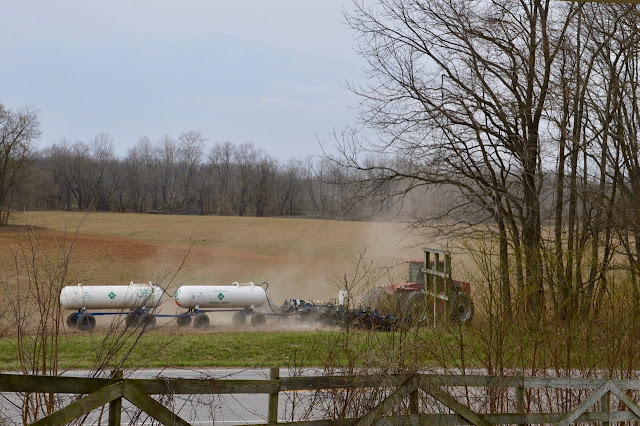 The second story I remember is from sometime around April or May 1970. I had just turned 18 years old, living in a farming community and knew nothing about farming. The money paid was fantastic and I could drive a large John Deere Tractor. My friends dad always hired extra help and hired me to spread this anhydrous on his large flat fields just west of Indianapolis towing two tanks.

On this particular incident I glanced back and saw where there was a leak at the connection of the two hoses that connected the two tanks. So I stopped the large tractor, bigger than the one in these pictures and walked back to the hissing leak of ammonia and nitrogen.

Remember I was clueless about farming and this mixed chemical. I was able to stop the leak and tighten the connection between the hoses but not before some ice freezing cold chemical sprayed against my chest. I didn't know how lucky I was until a few months later a farmer had the same thing happen to him, only the mixture hit him in the face instantly passing to his lungs and killed him. 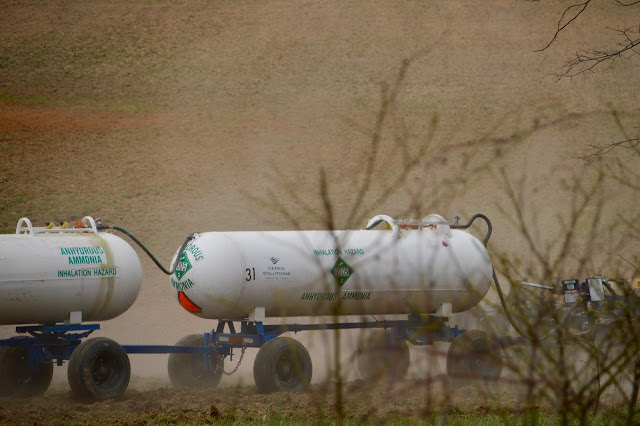 After a night of basketball of two really good ballgames Saturday night, I spent a few hours looking at those new Blogger templates again. I still don't see anything I like even after making a lot of changes to come as close to the design I have now. I still like playing around with that kind of thing so I'll probably continue to look or change the template to my Wordpress blog.

After a good night sleep we woke up this morning to warm temps, and the fresh smell of rain. Sounds of birds filled the air. 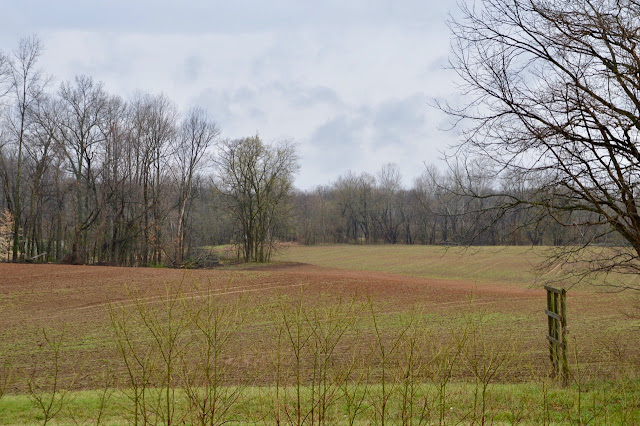 Notice the farmer parked his tanks instead of taking them with him. Why? He came back to pick them up Sunday afternoon. 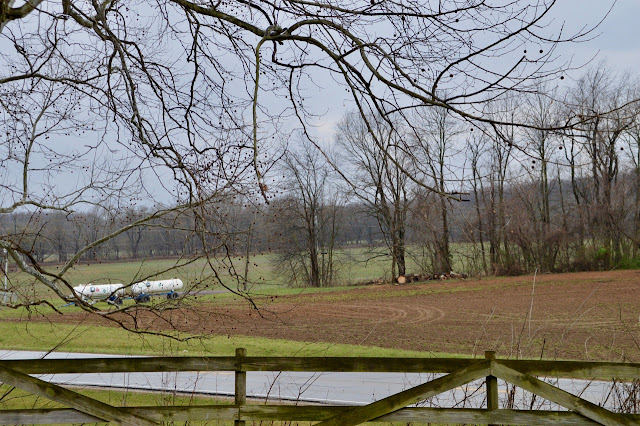 They planted corn in this field and the field past those trees last year, so I am assuming they will be planting soybeans this year. I cannot remember if they alternate years or not but I'll remember once I look at the blog from May 2015. The two different fields are owned by different people. 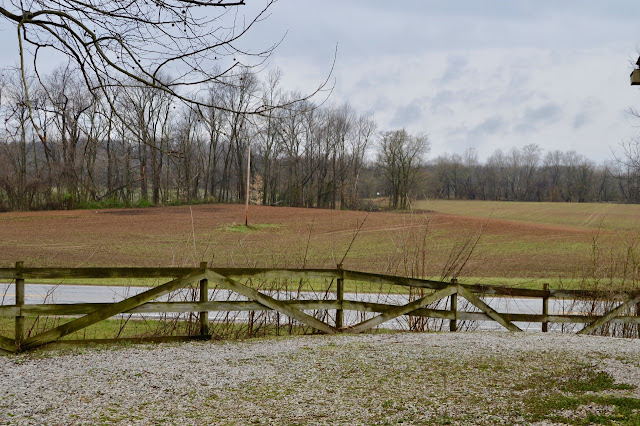 I know the bank in back is not looking great but it's right on schedule for a non-professional job. I cleared out all of the wild overgrowth and burned it last November. Earlier this month I raked out and pulled all the roots, burning them. I may have planted grass seed too early on that weekend in early March when it was near 70°, only to have it drop below 30° a week later for a few days. So I planted more seed when it was warmer a few weeks later but that probably got washed away from the hard rains.

I planted more seed last Monday when it was warmer, watered it twice per day and with the rain last night I can start to see some new grass coming up. I'll keep mowing over this after it fills in and continue to seed it next fall. Eventually it will look like the yard on the other side of this fence. What I cannot mow I'll cut short with my weed eater. 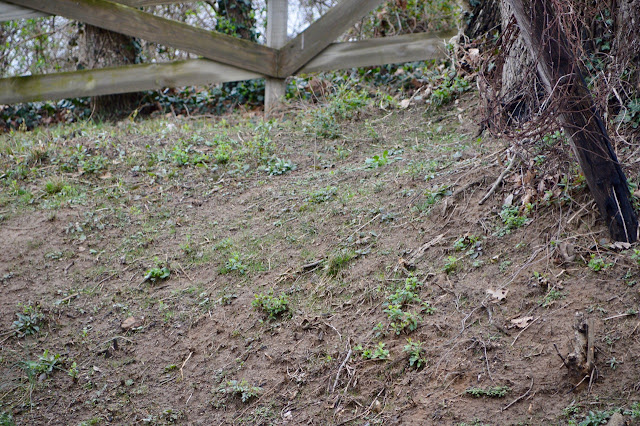 Sadie wanted to walk early this morning but it was raining lightly each time we went outside. The ground was pretty saturated ... too wet to walk. The two basketball games today started early and both were over a little past 7pm. By the time the buzzer sounded ending the UK / UNC game I was putting on my hiking boots just in case we ran into wet grounds on our walk.

We headed out for our first walk of the day around 7:15pm ... the wind and skies looked like more rain was on the way. 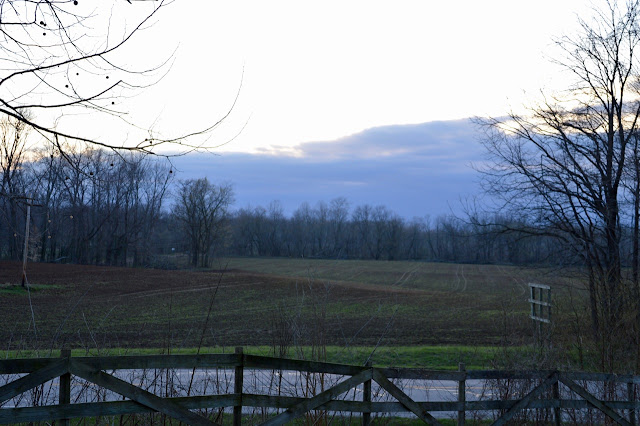 Since Sadie had been waiting all day for her walk, she immediately took off and started her tracking. She loves these walks. 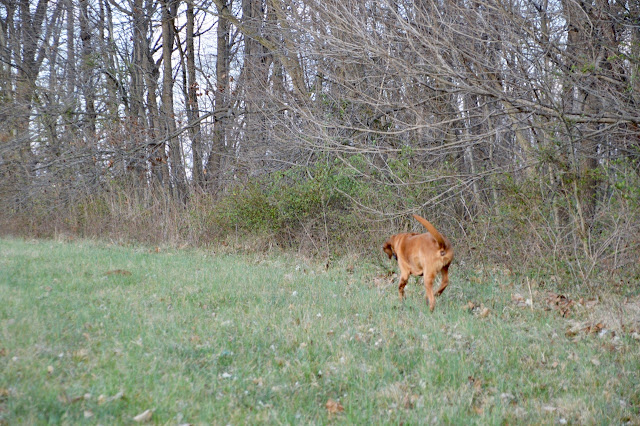 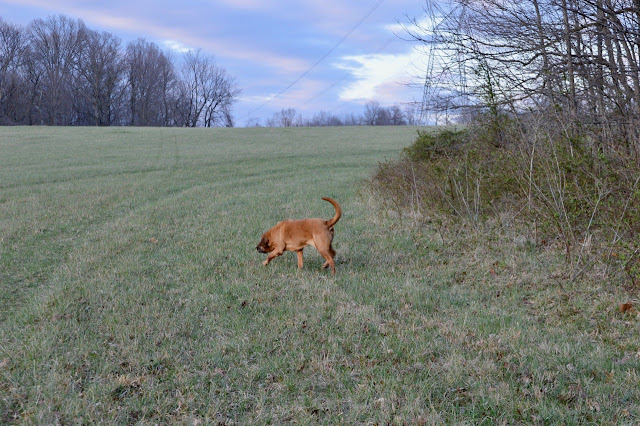 While I was taking pictures of Sadie I didn't realize that Stella was already heading for the neighbor's woods if not their yard. From the few hoof prints in the ground the deer traffic must have been heavy last night or this morning. 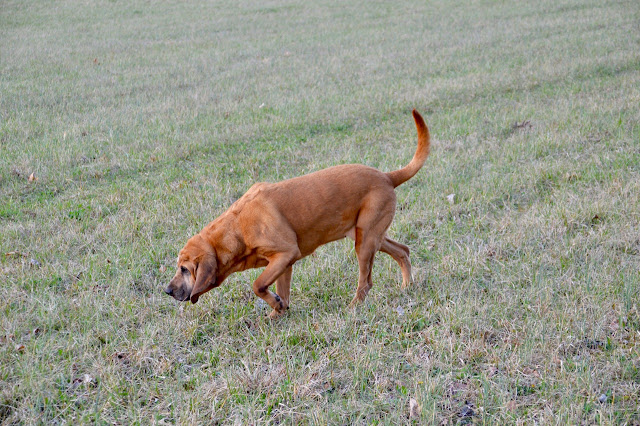 I had to head Stella's direction and trot toward her, calling her name because she was taking off on me. About the time I got about 10' from her she turned and started trotting toward me, then ran past me to catch up to Sadie. She must have thought I needed to get some running in today after spending all weekend on the couch watching college basketball. 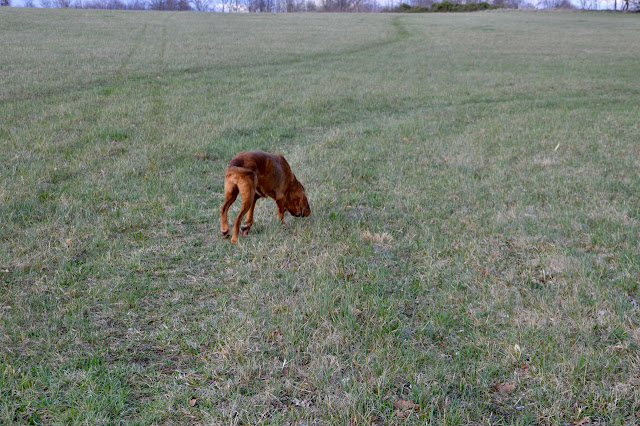 She still likes to go her own pace even after catching Sadie. With her right front paw lifted you can tell just how slow she walks. 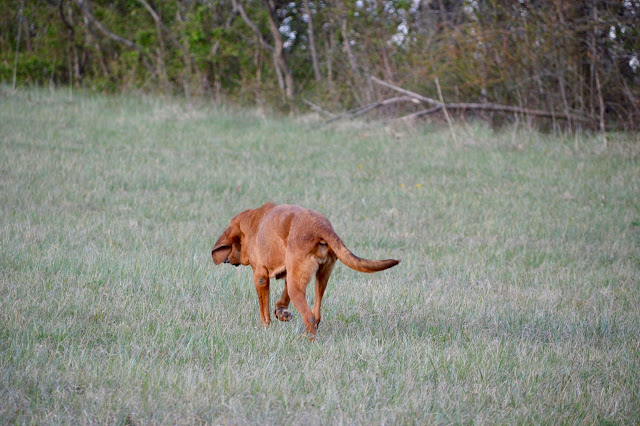 Sadie was into tracking though tonight so she was constantly moving. 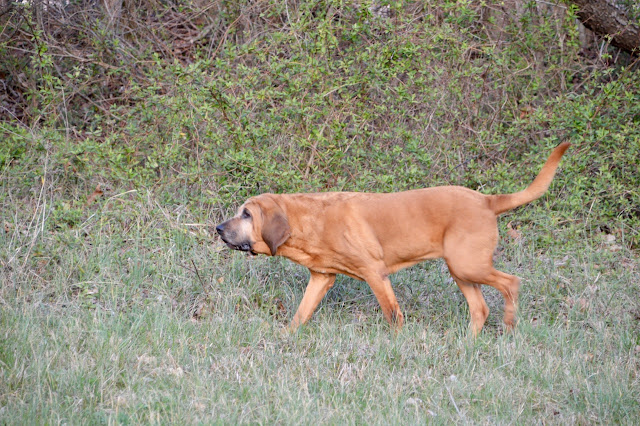 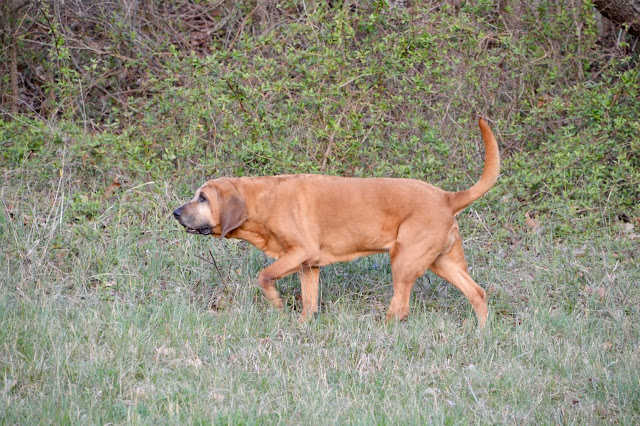 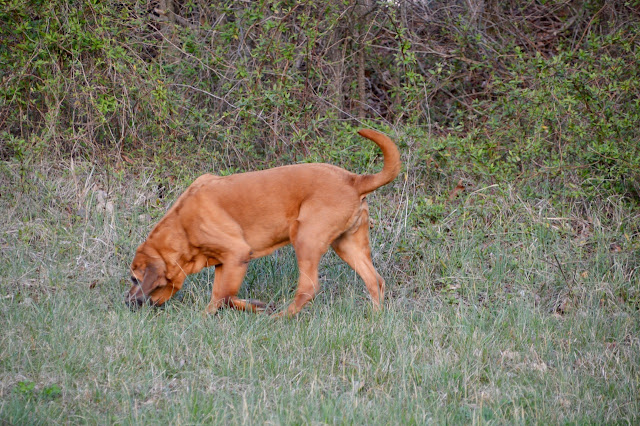 Once she locks into a strong scent, she is pretty focused but I know that she will not take off on me and will always circle back to where I am walking. There are no problems giving her total freedom on these walks. 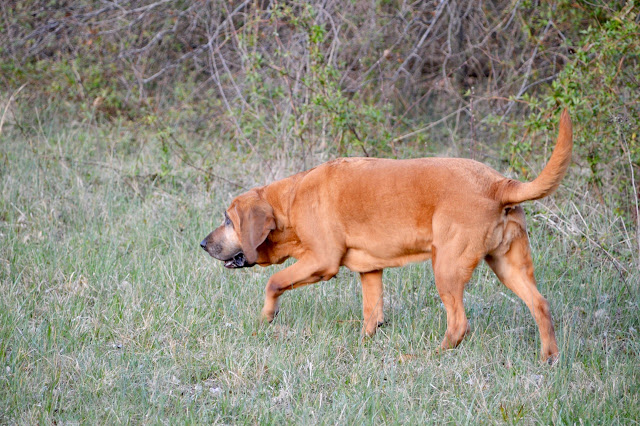 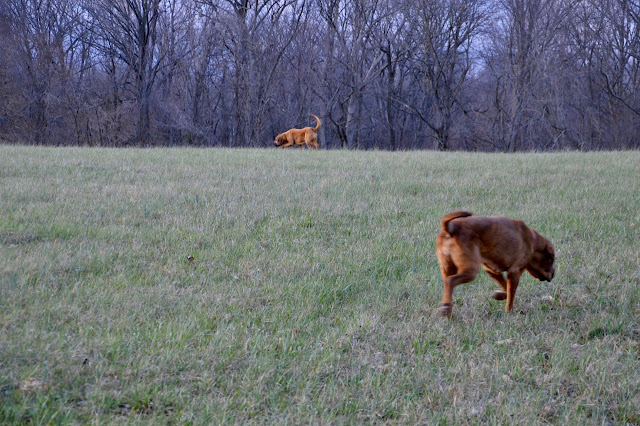 Stella has a pretty good nose but not as good as Sadie's. She is more interested in finding stuff to eat, than to track. 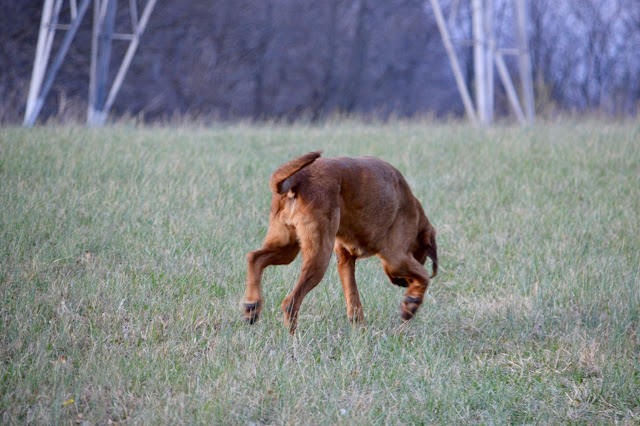 By the time I approached the final turn home, Sadie had moved far to the right of the path we take, she was in the 'no fly zone' but came running to to me when she saw where I was.

Both hounds walked too close to me to take pictures for the rest of the walk home. Not sure if it is suppose to rain tonight but it definitely felt like it was on the way. 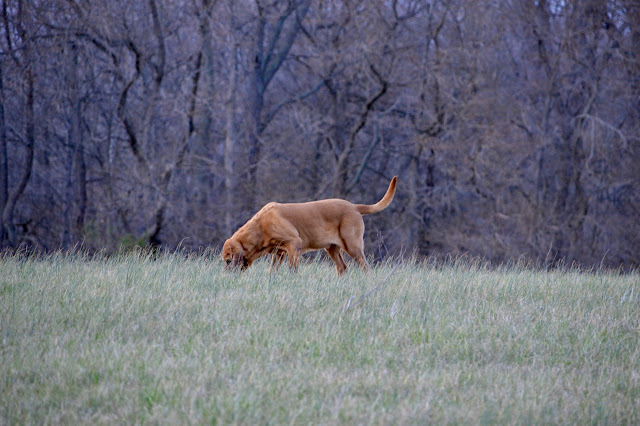 I don't have to mow anywhere near the whole yard but there is enough spots of heavy new growth that I will have to mow a few spots as soon as possible in between the forecasted rains this week. It was like this grass grew over night after the rains last night. Hopefully that new grass will overtake the damage done by the moles this past winter. 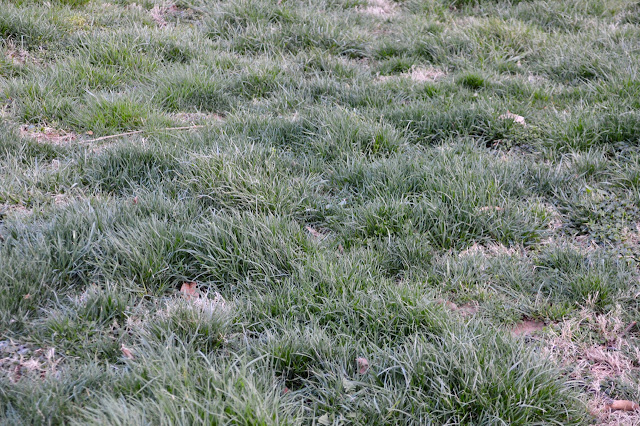 I still need to take my hand rake through the front yard one more time in hopes the rake can find the missing steel hinge pin that fell off my mower last November. You would think it would be easy to find but I have looked all over that yard and can't find it. I don't want the mower to find a steel pin while I am mowing the yard in a week or two.

Maybe I need to find a place that will rent me a metal detector.

There were some great basketball games this week. Some were won in the last seconds and with four teams left to play, one of them has never been in the Final 4 in their school's history and another has not been there in 70 some years. There will be some good games next weekend.

With time off until next Saturday night for the games to be played, I'll be back to reading books this week. I have a couple of new books I checked out from the library. If the weather is nice this week, I'll be outside starting on my 'to do' list for this year.

It's hard to believe that March is almost over here in 'the tropics' of southern Indiana.
at March 26, 2017