No Problems With Last Night's Storms 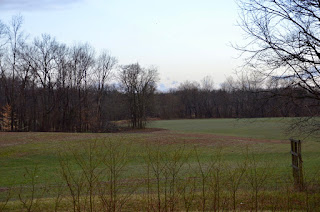 The storms did not arrive until late last night, almost 11pm. I pulled up the Intellicast radar site so I could see what was headed our way, if anything.

I also follow U.S. Tornadoes on Facebook and they have updated radar from the National Weather Service. When they used the term "devastating velocity" and the radar shows the tornado rotations were 70 miles away heading our direction, it's not good.

I will say we were lucky and missed everything. There were a long string of storms and at one time they said that over 20 tornadoes had been moving together over 155 miles through 3 states. Various times it looked like those cells of intense rotation were headed our direction when they were 70-90 miles away.

Yet, every time they got within our range of 20 miles, they would blow by the north or south of us. Finally past midnight I decided I was going to call it a day and decided if something bad was about to happen, Stella was sure to let me know. I slept and never heard anything the rest of the night, although we did wake up to a thunder and lightning storm really early this morning. 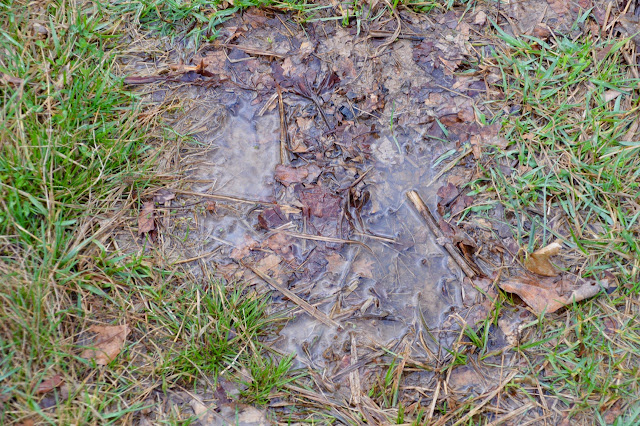 I was almost sure the field was going to be too wet to make any hound walks today. The picture above is right on the path just starting our walk. Usually if it is wet 'down here' it is even wetter and muddier at the back of the field even with slightly higher elevation.

Sadie and Stella decide we needed to find out for sure and before I could say no, they both were long gone heading along the edge of the woods. I could tell their noses were extra sensitive today and they were picking up a lot of activity. 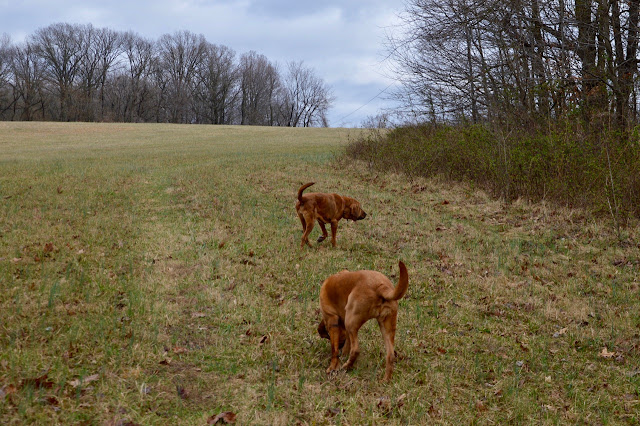 Even Stella was out in front with her nose to the ground. All through the walk this morning neither hound stopped to eat anything ... they were seriously interested in tracking scents and it was obvious there was a lot of them to identify. 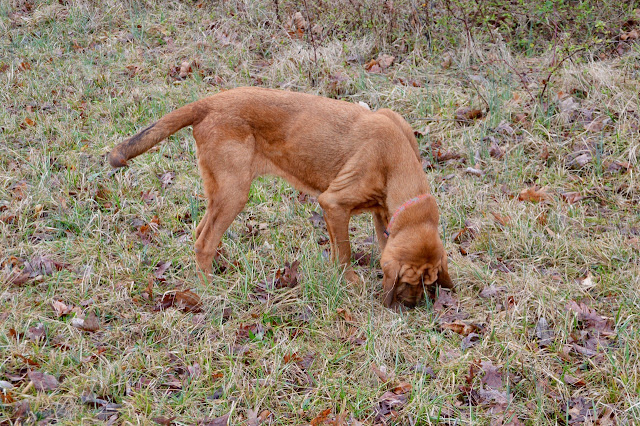 It was strange not to have to say "come on Stella" during this morning's walk. She kept up with Sadie most of the time and a lot of the time they were side by side with their noses to the ground. 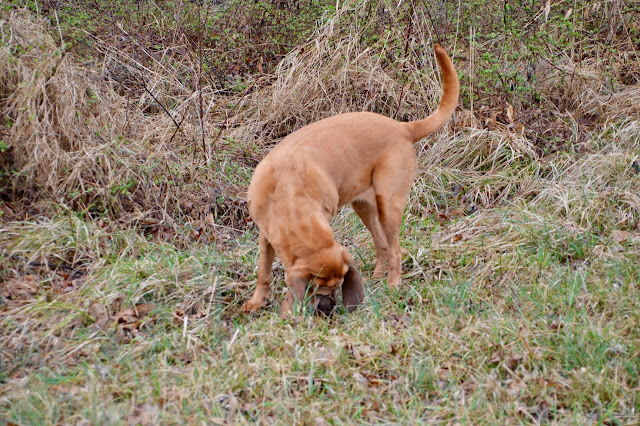 I had to walk just a few inches off our worn path. If there wasn't standing water, the ground was saturated enough that water was coming up over the soles of my hiking boots. Each time the hounds trotted, there were water trails coming off the back of their paws. 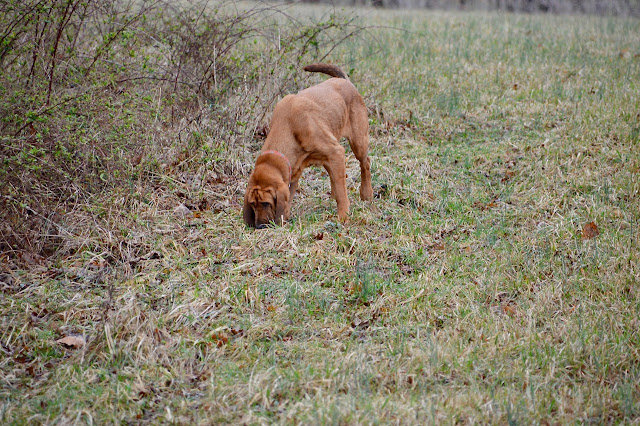 I had not walked to far past the first turn when Stella and Sadie took off sprinting to the far right corner. They ran non-stop along the back edge of that corner, never checking out the deer area to the right that usually holds their interest. 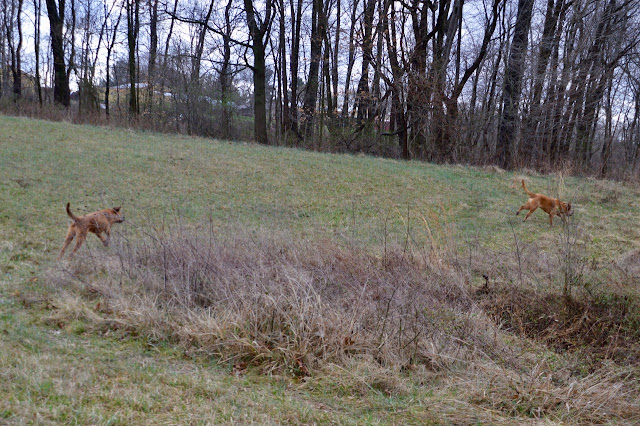 Sadie was moving faster than my film speed but with her feet in the air and her ears flopping you can tell just how fast she was going. The scents must have been strong this morning. 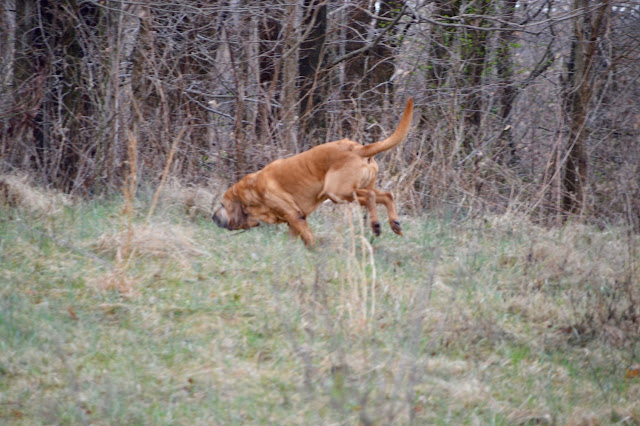 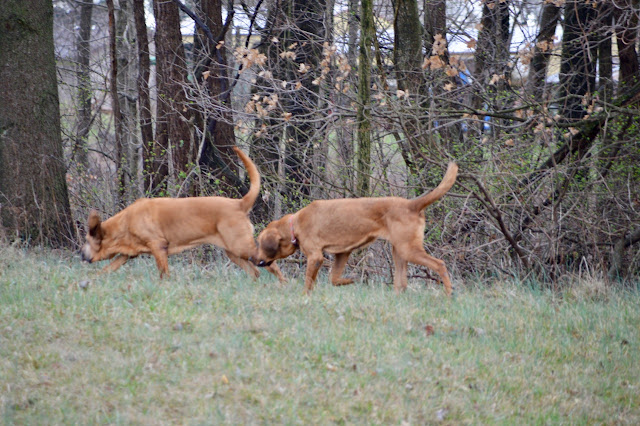 This is just past that corner that goes to the far right part of the field. It's pretty rare that you see standing water in this area. I can only assume it rained through most of the night. 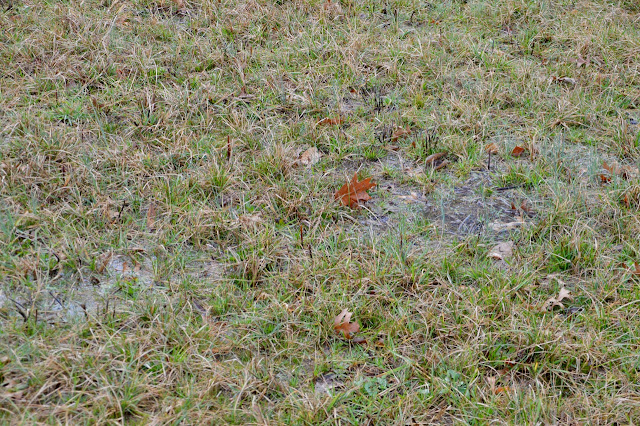 Sadie was serious today ... no time to play around, too much stuff to investigate. As usual she was a very happy bloodhound. 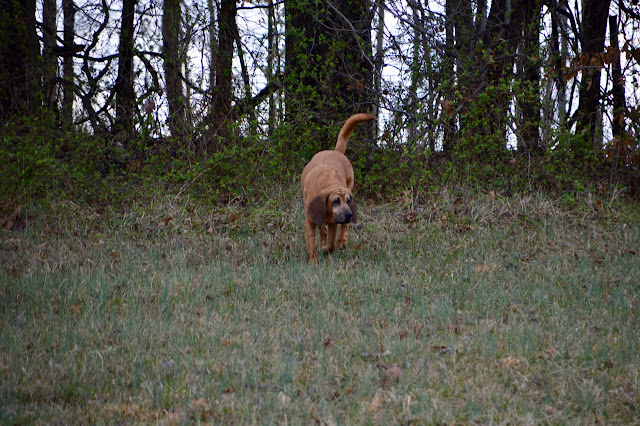 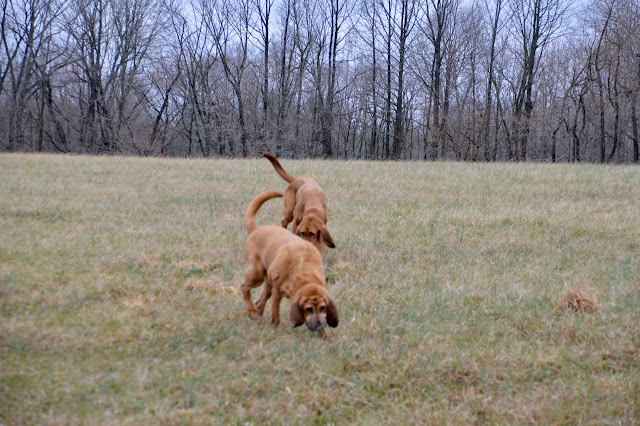 It's warm today and windy but nothing like yesterday. By looking at the sky you can see the clouds are moving at a very fast speed, all from the SW. 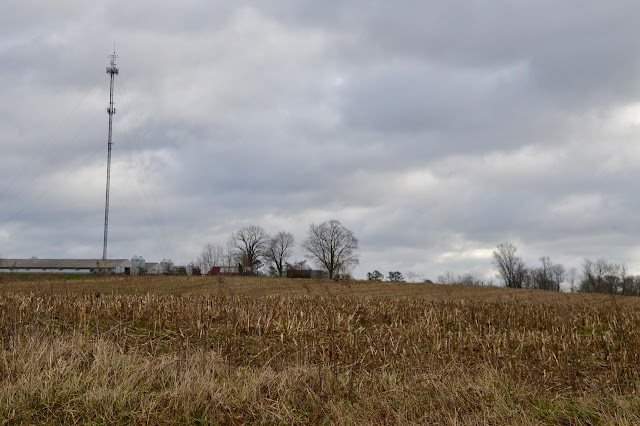 I was beginning to wonder if the hounds were going to stop and make the final turn home. Stella thought about heading into the 'no fly zone' but she stopped and looked in that direction, then at me, then back in the direction she would like to go. 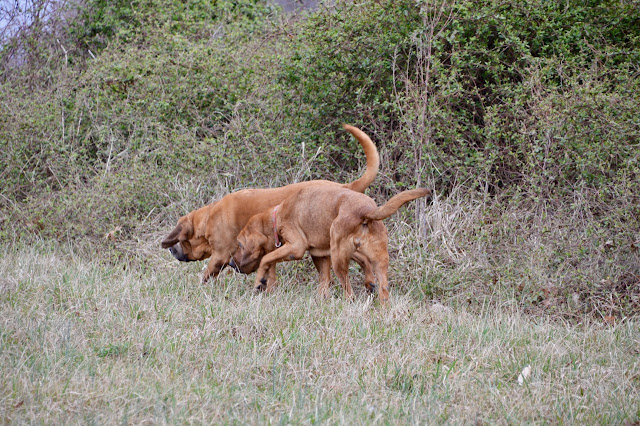 She finally decided on her own to head home with me and Sadie. 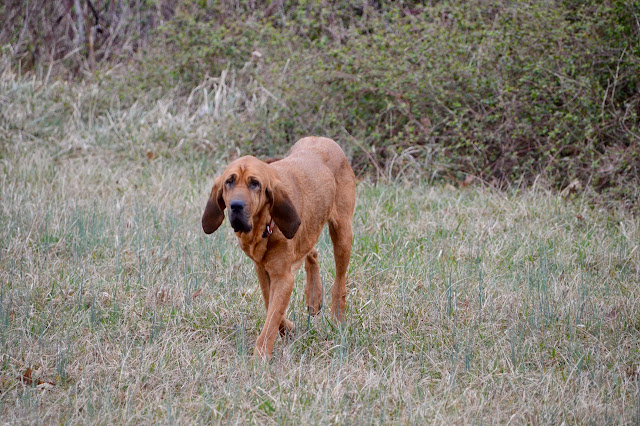 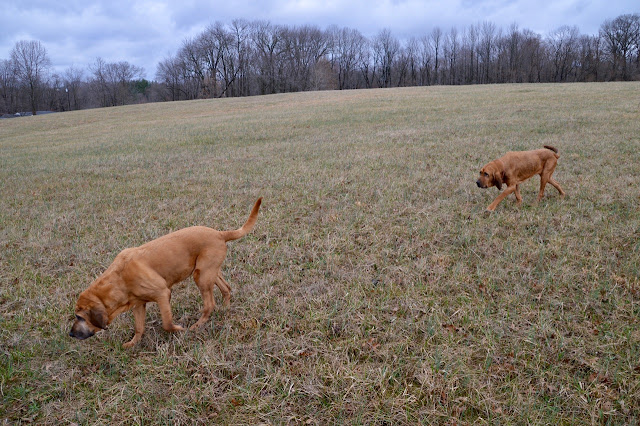 These are the skies looking southwest. We don't have any bad weather in today's forecast, just a lot of wind. With the sunshine breaking through the clouds at times it shouldn't take long for the field to dry out. 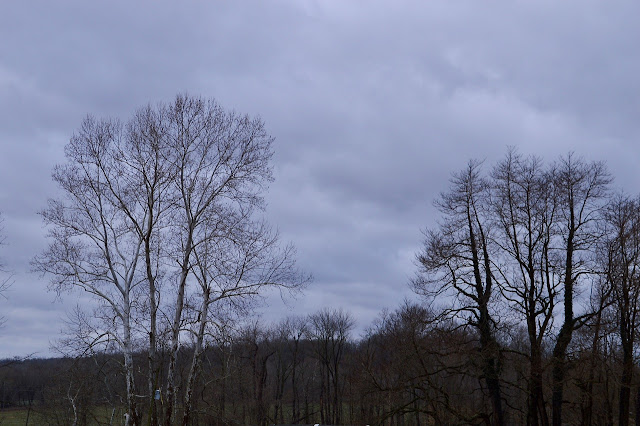 Yesterday I decided to make a new blog on Wordpress. I found the same free template I had used before and it didn't take too long to upload some pictures and write a few sentences. The link is on the left sidebar of this blog under the blogs I follow.

About every year before my Exede internet service and Directv service renews, I call around to different companies to see if they now have service in my area. With all of these good deals you hear about with unlimited data or prices locked in for two years without an increase, you have to see if there is something better.

Talking with Exede yesterday I found out they are just like Directv ... you have to threaten to leave and move to a different provider when they tell you there is not any discounts available for long term customers that pay on time. This is after they have been giving you a discount for the past 12 months.

It is amazing how fast they give you that $10 - $15 off per month for the next 12-24 months when you mention to them you are going to look around at other companies and will even pay the fee for breaking a contract early. They call that "a retention discount".

Still, I did find out that Frontier Internet does have service in my small town. They can't verify online in their program if I can have that service here at the house. When she said she could give me 45Gb of data a month for $60 including $9.99 per month for the modem I told her I'd accept her offer to have a technician come out to my house to check to make sure if I could get their service.

I now pay Exede Satellite Internet $80 per month for 15Gb of data. That 45Gb sounds better than 15Gb as well as $60 compared to $80. Here is the difference ... Frontier says they can give me download speed "close to 6Mbps" while Exede tells me their download speed is 15Mbps. I do a speed test at SpeedTest.net and it is always around 10-12Mbps or twice as fast as Frontier's top speed.

Is the extra speed worth it?

I almost forgot to write about Stella. She did not even react in any way when the winds picked up last night nor the lightning and thunder that woke us up this morning. She slept through everything so evidently the fear she had of storms when I got her in August 2015 is gone. Storms have never bothered Heidi or Sadie. She has also continued her streak of no damages when I am gone, today was grocery shopping day and nothing was damaged when I returned home.

I don't have any random thoughts today so I guess that idea of ending my posts every day with a bazaar thought may not work.

The windows are open today in 'the tropics' of southern Indiana.
at March 01, 2017