The Hounds Check For Snow 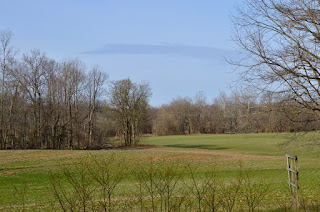 Last week when it was 64° and sunny, the local tv weatherman warned us that snow was on the way ... today. Yesterday that snow icon disappeared for today from my iPhone weather app.

Late last night before going to bed at 2:30am after my last ballgame, that icon was back, it was freezing outside at that time so the snow was back as a possibility.

Since we were or I was up late last night we didn't crawl out of bed until 915am. As I was making coffee I did add one hour to the current time to see what this would be like on Monday after we "spring forward". Sadie was positive we were taking her walk right off the bat, even before coffee. 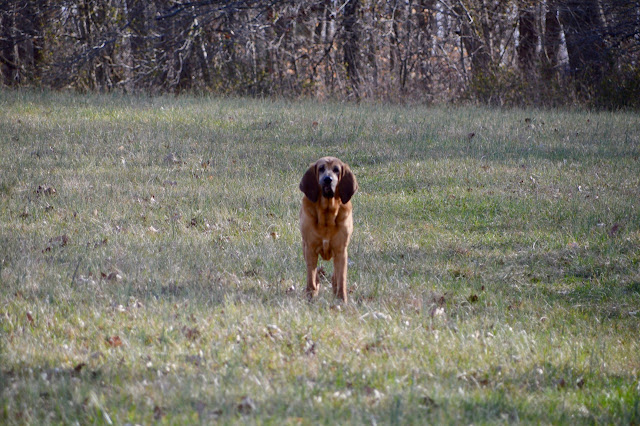 Stella was even in the walking mode before coffee. 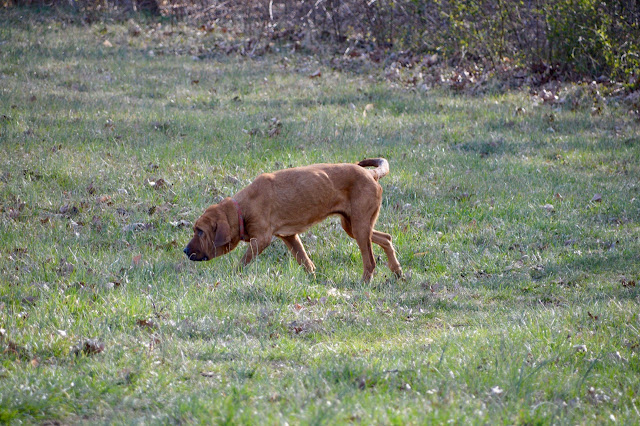 Yet when I yelled to tell them "come on I need coffee", the both started for the house knowing they were not going to walk yet. 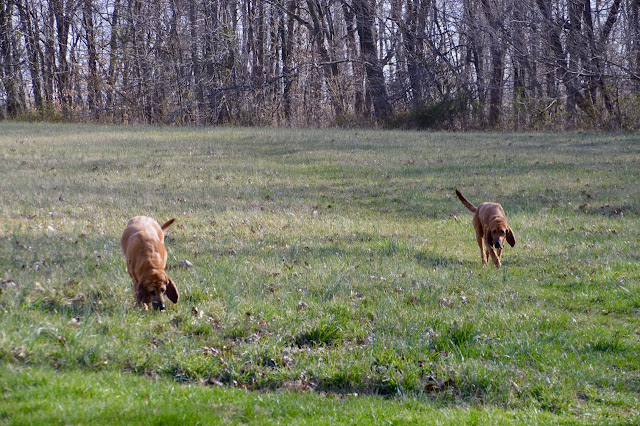 Heidi came back outside with us but it was only to relieve herself. She was back inside where it was warm almost within minutes. Stella was checking me out to see if I was dressed for a freezing weather walk. I was, I had her standard leash in my pocket just in case ... and told her "let's go". 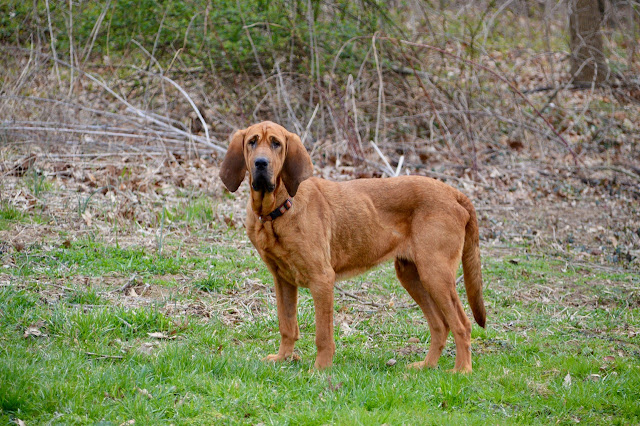 Both of them took off fast, way ahead of me. That did not mean that Stella was going to walk with us today. It just meant she started fast. She had other plans and I wasn't going to stop her today. It was 31° and felt colder but there wasn't a sign of snow anywhere. 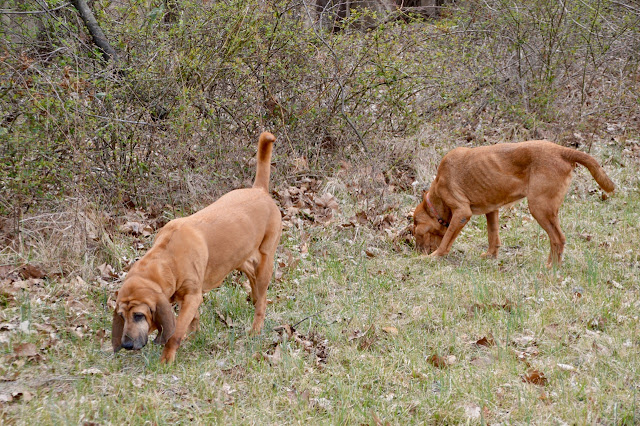 Sadie had her normal energy this morning. She got some running in. She also tracked a lot of different scents. 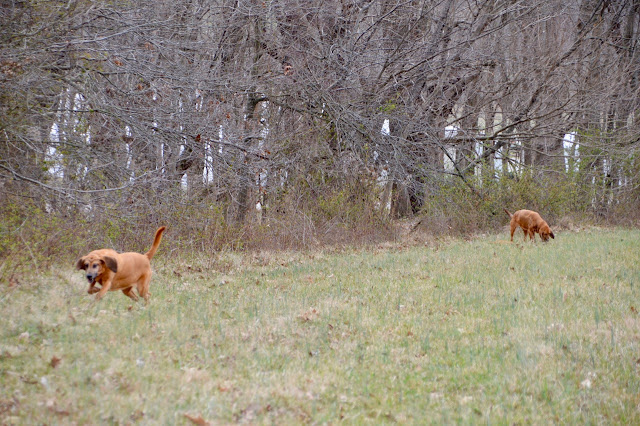 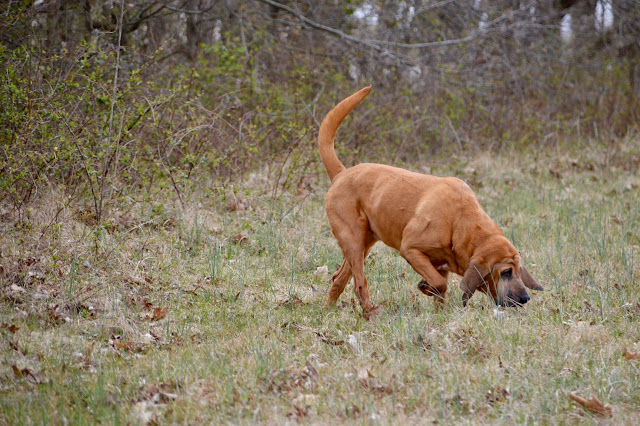 The only time her nose came off the ground was when she stopped to look for Stella. Otherwise, her head was low to the ground, tail was curled and totally focused on those scents her whiskers and ears were keeping near her nose. 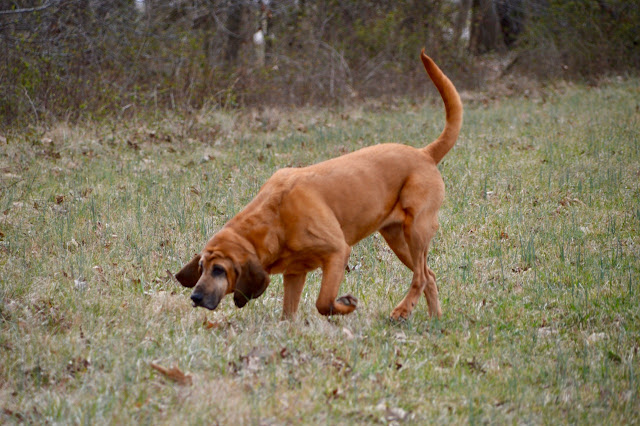 Stella was about to head in the opposite direction when I called her name. She veered back onto the path but was out of my view pretty quickly. 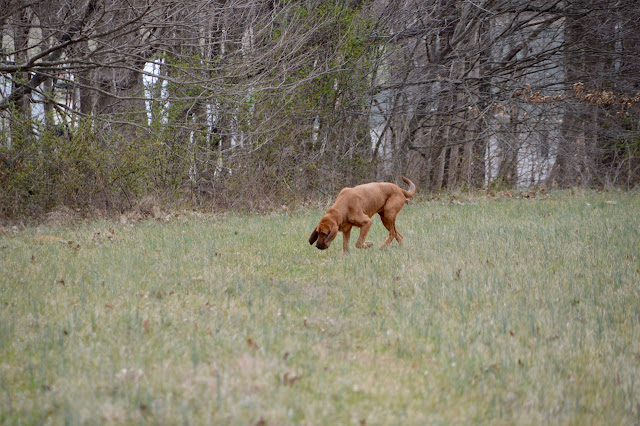 Sadie wasn't going to wait for her, she had moved around the corner and was heading to the back of the field. 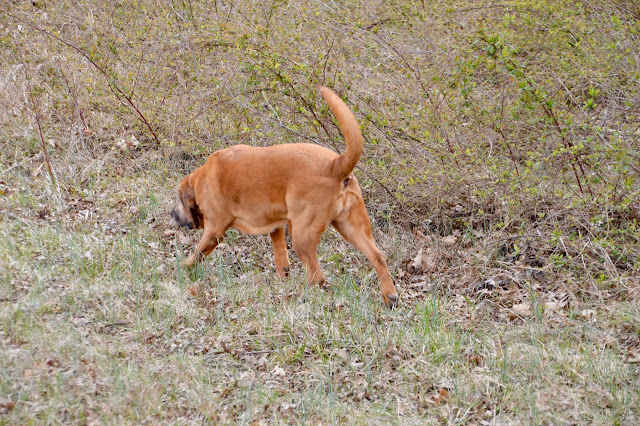 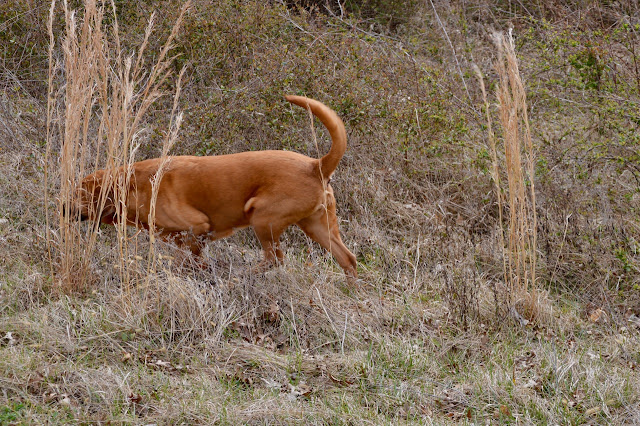 She sprinted from the right side of the field out to the center, where she started some rapid changes of direction, tracking that scent every inch of the way. 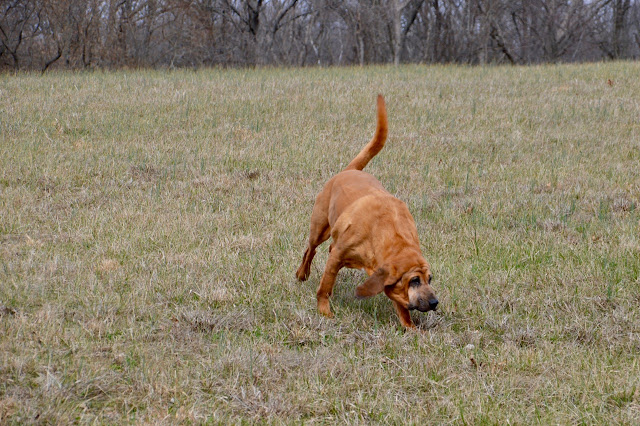 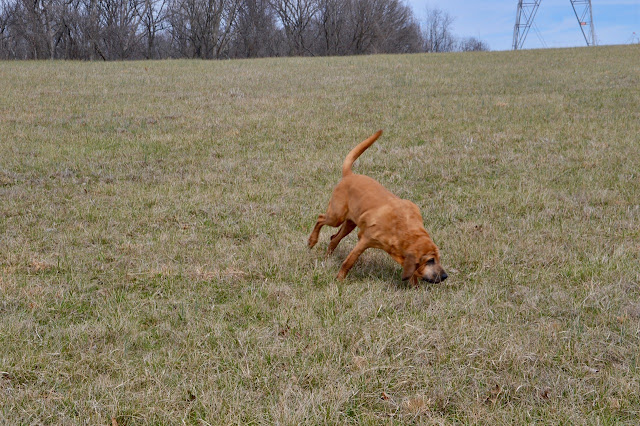 She stopped for the first time to see where Stella was. Stella was nowhere in view and I had no idea where she was. 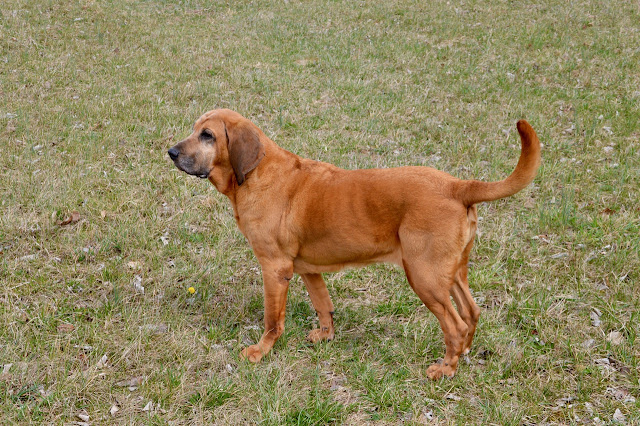 Sadie did not look long before she was back to tracking. 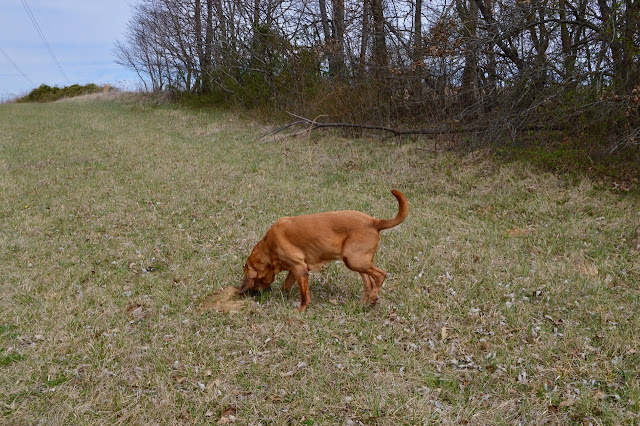 Maybe she heard something because she stopped to look in the direction of Stella again ... but I did not see here anywhere on the horizon. 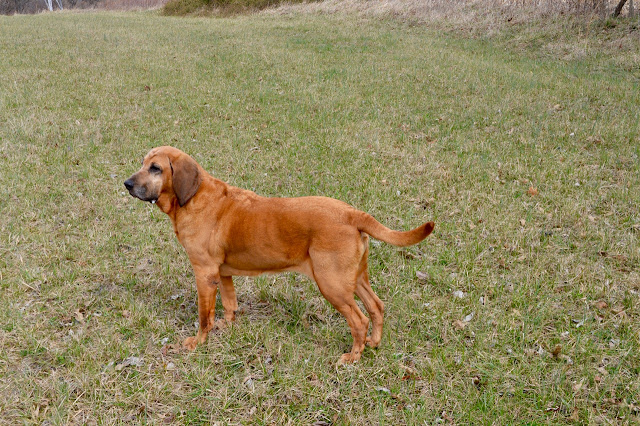 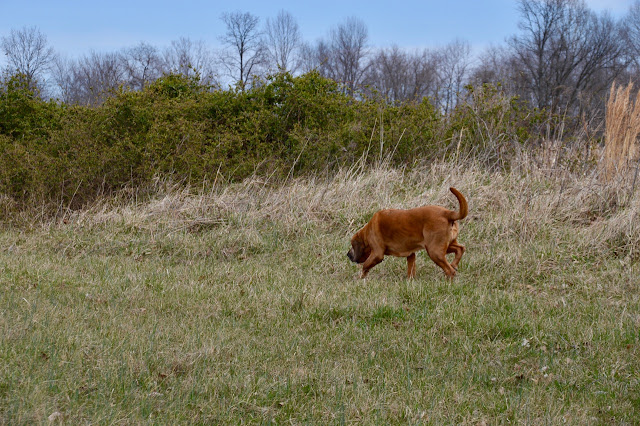 It looks like Sadie might be losing a little weight. I don't want her much lighter than this. 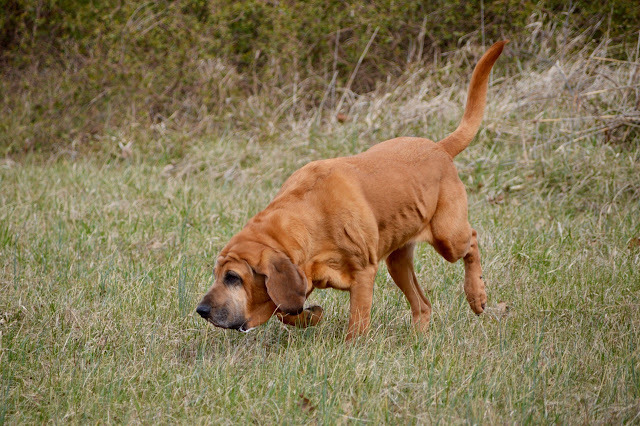 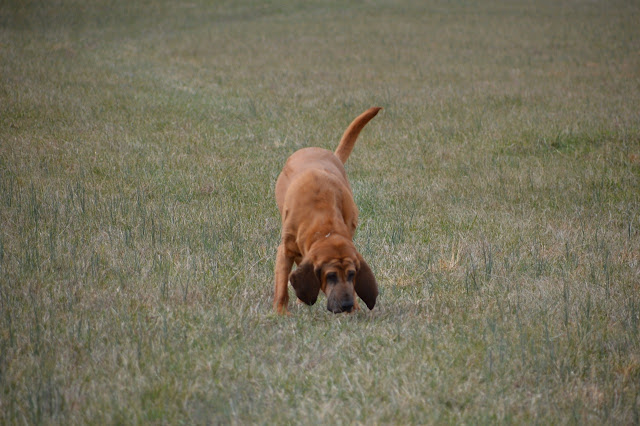 Just as I crested the small hill while waking back home I spotted Stella over by the neighbor's woods but much further west and near their backyard. I don't want her anywhere near there because she can pick up a scent in their drainage ditch that heads to the highway. 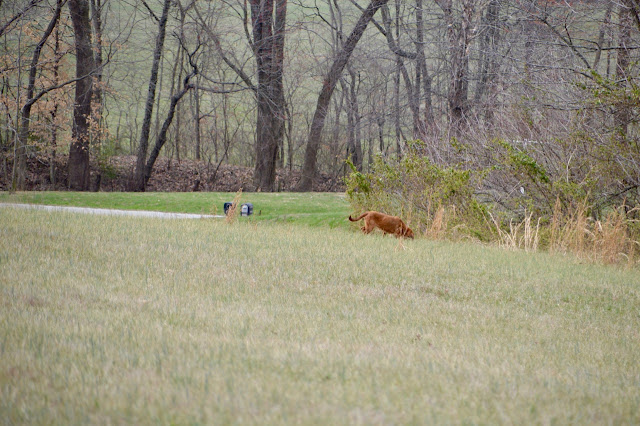 So I told Sadie ... "go get Stella" and off she went for the rescue of Stella. 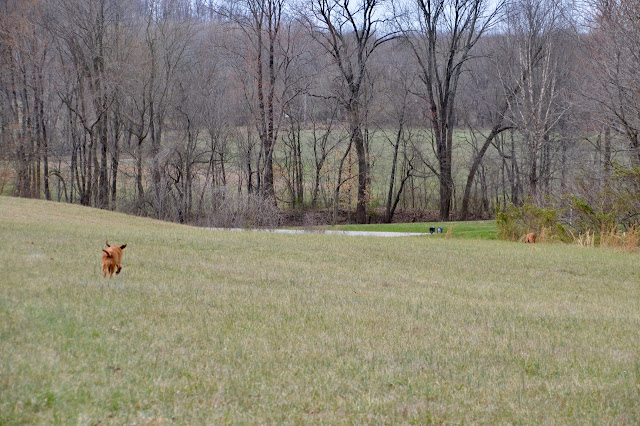 Once Sadie got near her and then turned around to run back to the path, Stella decided to follow her. 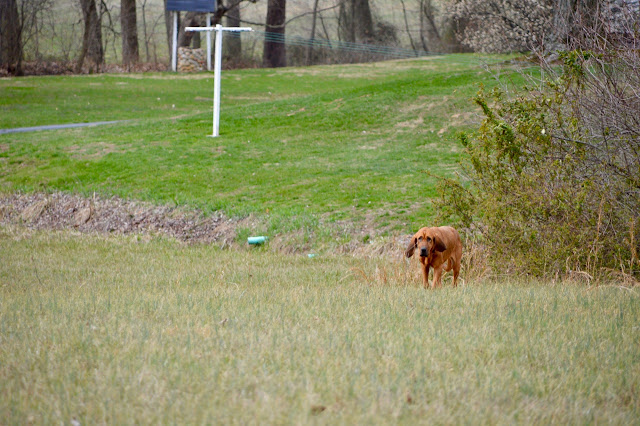 Only at her pace, not Sadie's. 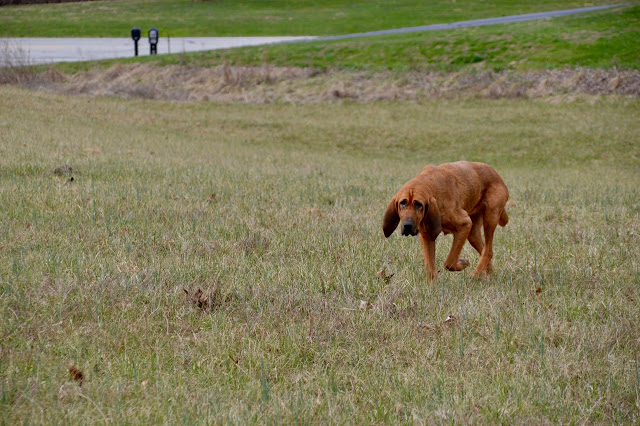 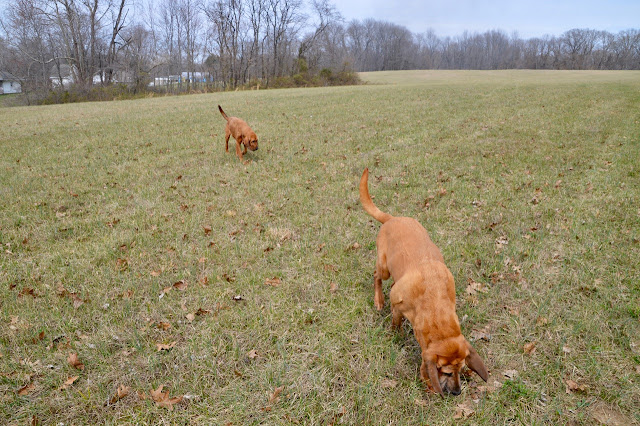 After that it was a slow walk home. It was already past noon and I had the urge to take the Z4 out for a longer ride than I normally do. I knew just what road I wanted to do today. 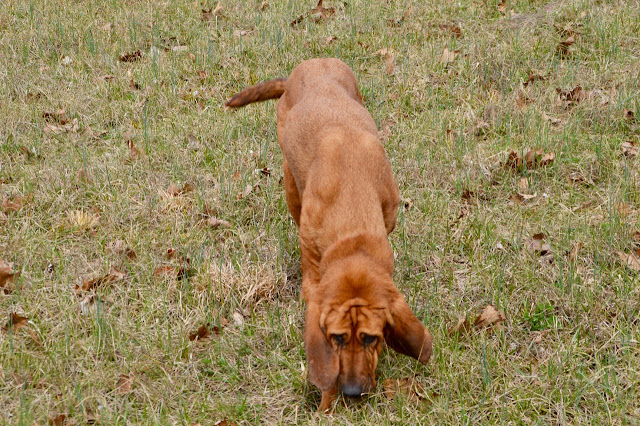 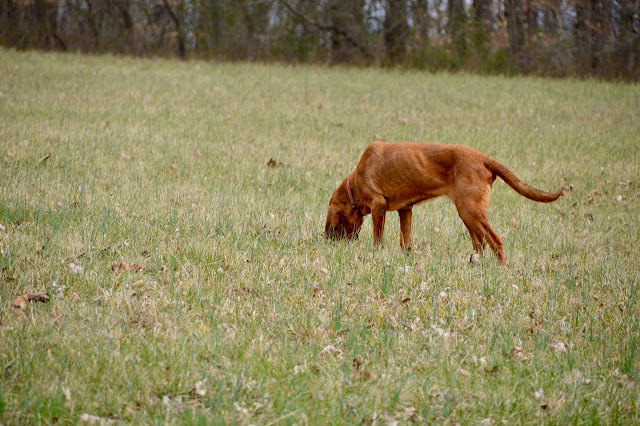 I didn't have my camera with me and due to the road I was driving, it would have never been possible to take any pictures. With a narrow winding road, with no shoulders, up and down, through trees covering the hills ... I would go from short stages of straight highway into sharp 20mph turns and hairpins. It gave the Z4 a chance to do what it was designed to do.

It was really fun to drive and a highway I had taken many times with other sports cars that I have owned. As I headed through a local town back to my house, it was hard not to make a right turn to their casino and play some craps. I need to go sometime because I have that feeling that doesn't come often. I usually have good results when I have a strong urge to go throw some dice.

I'll be watching more college basketball today, in fact as soon as I post this. There will be a late game tonight at 11pm. Since the team I was interested in was beat last night I may just tape the 11pm game between Oregon and Arizona and watch it Sunday sometime.

That 60° weather is not seen anywhere on the ten day forecast, so we are back to cold weather. I want that warm weather back.